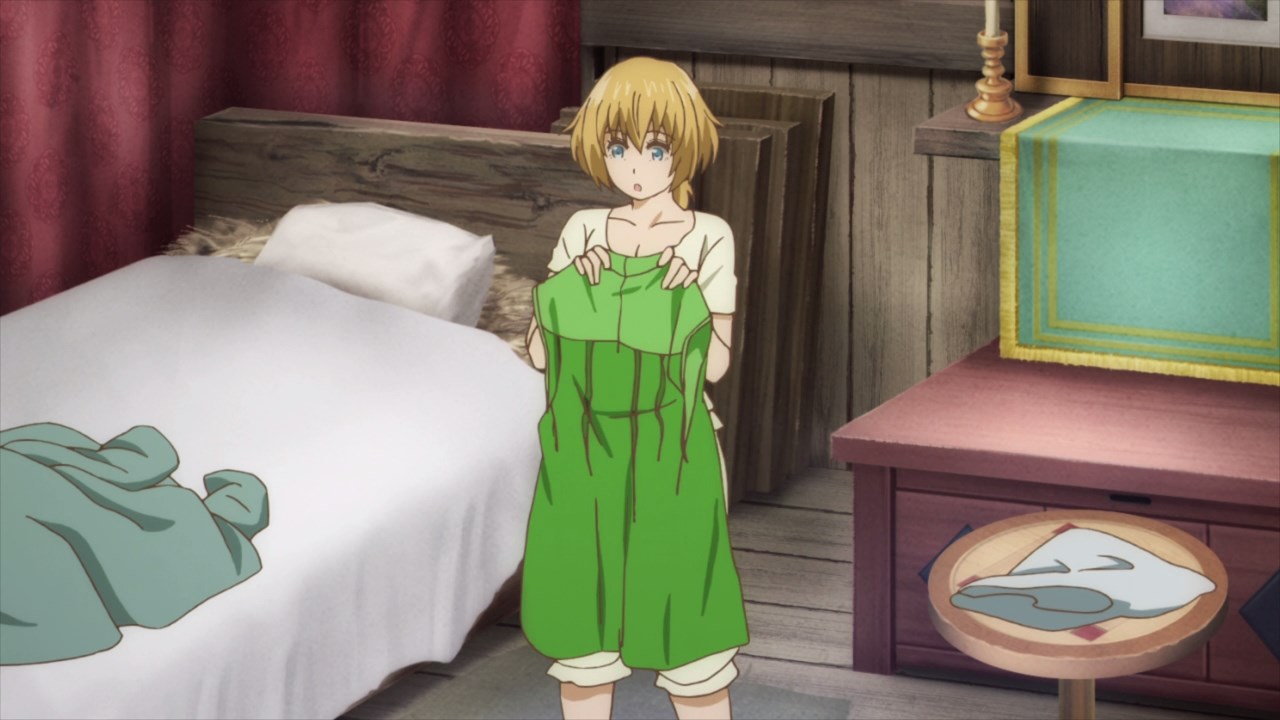 On this episode, Arte got a new set of clothes to wear since wearing a dress is a bit restrictive, especially when its long skirt might trip her down. 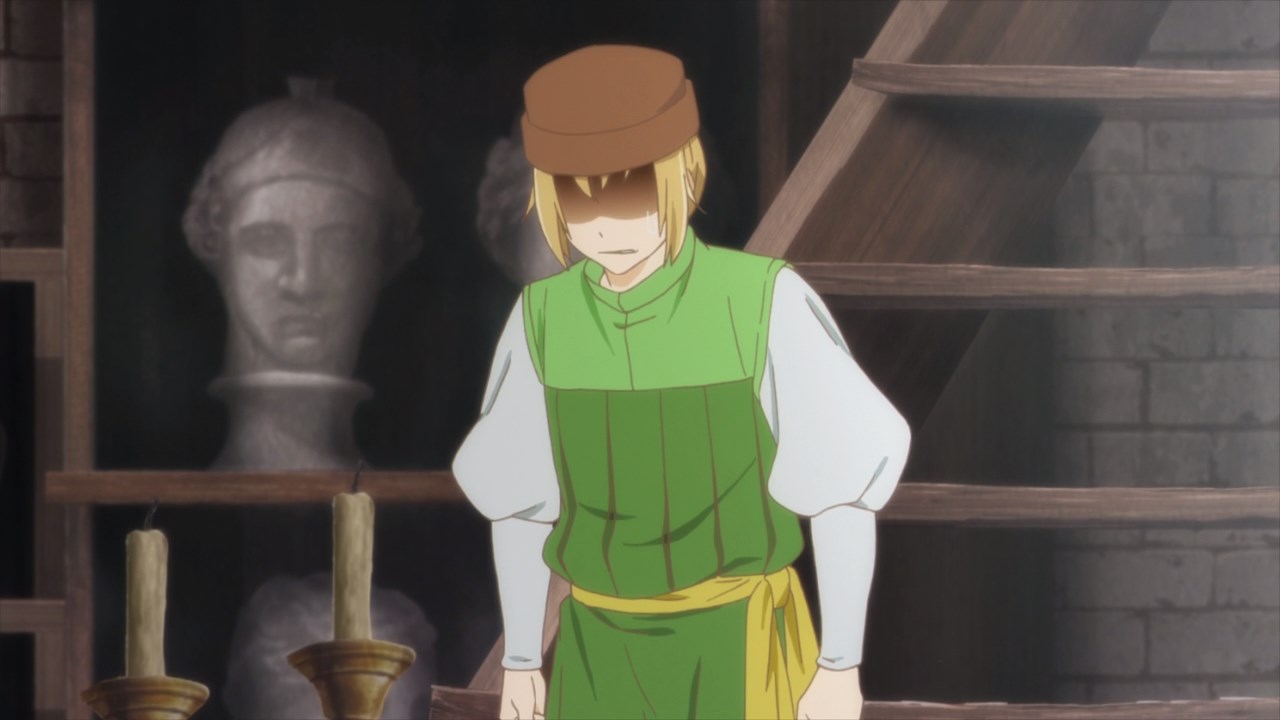 Then again, it seems that she looked like a boy upon wearing those new clothes. By the way, those clothes were given by Leo. 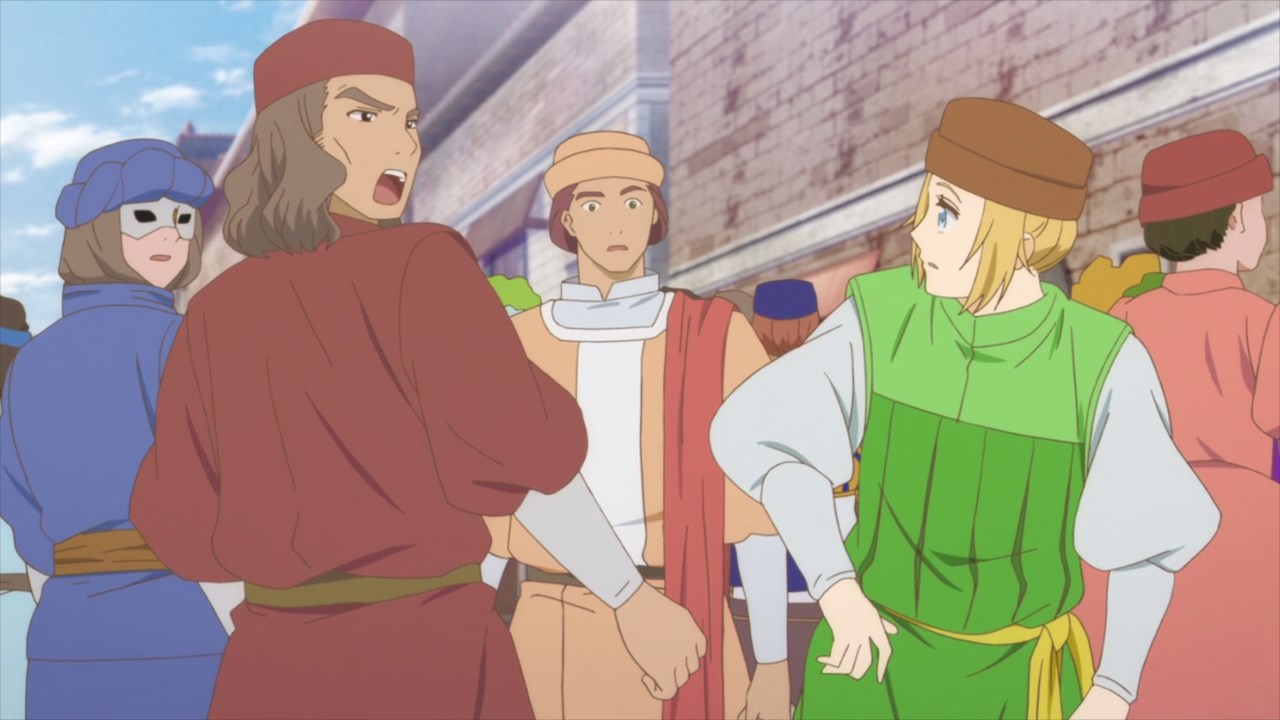 But hey, at least they see Arte as a boy instead of a girl, so there’s no complaints there in regards to her getup.

Anyways, this episode features the Carnival in Florence, Italy where everyone is having a fun time! 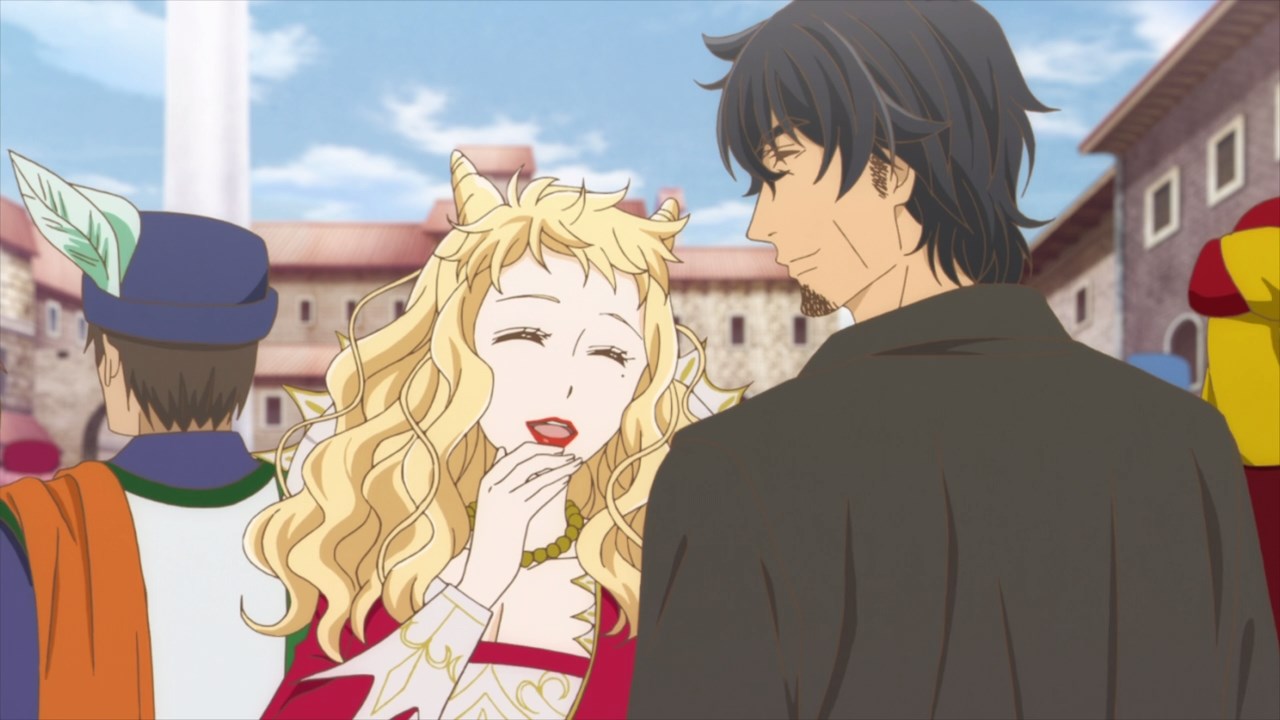 Also, looks like we saw Leo smiling as he met a famous courtesan named Veronica. I bet that she wants to have some fun time with the artisan. 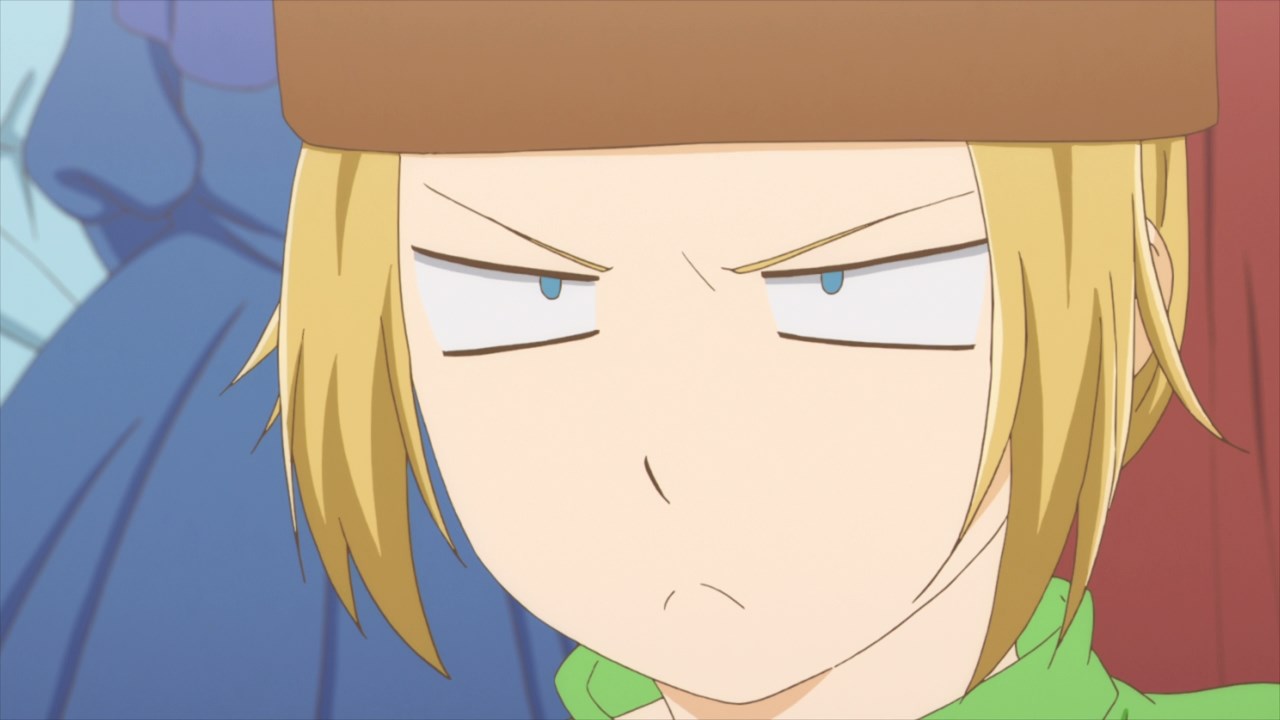 Of course, Arte can’t believe that her master is happy seeing a courtesan. What Arte, are you jealous? 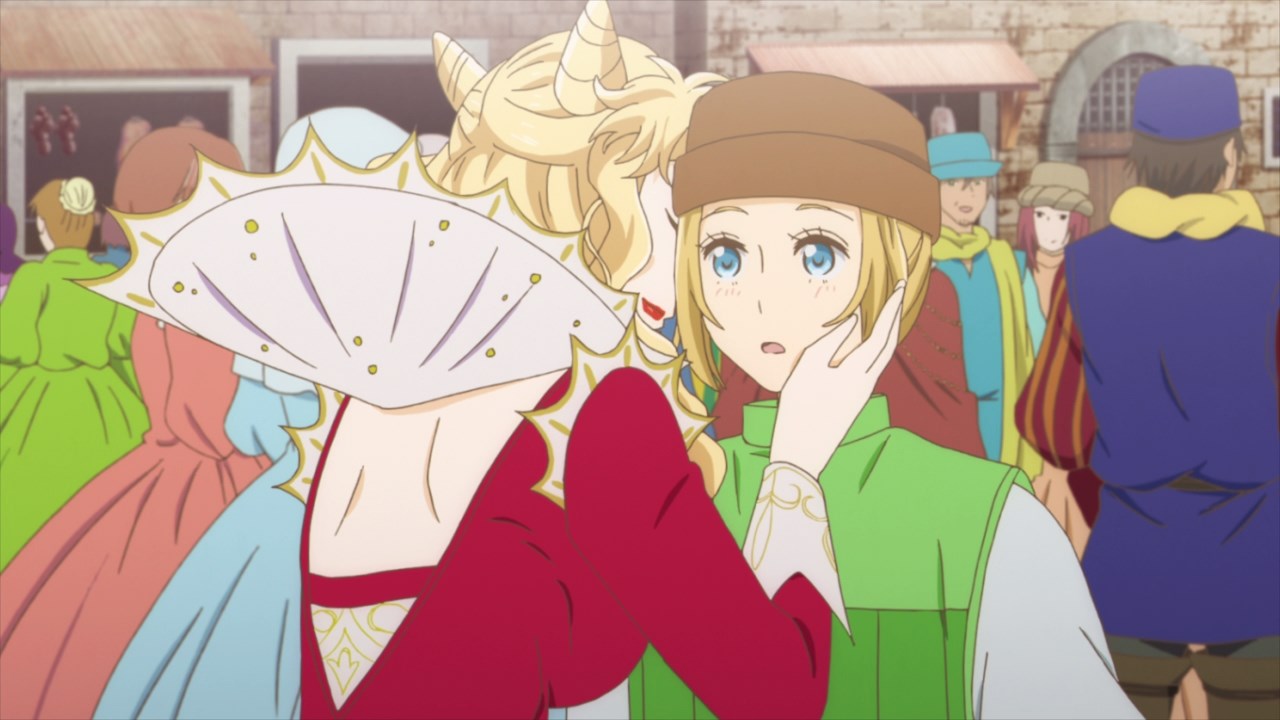 On the other hand, Veronica has some interest on Arte even though she dressed up as a boy. But you know what, I think Veronica will return in future episodes. 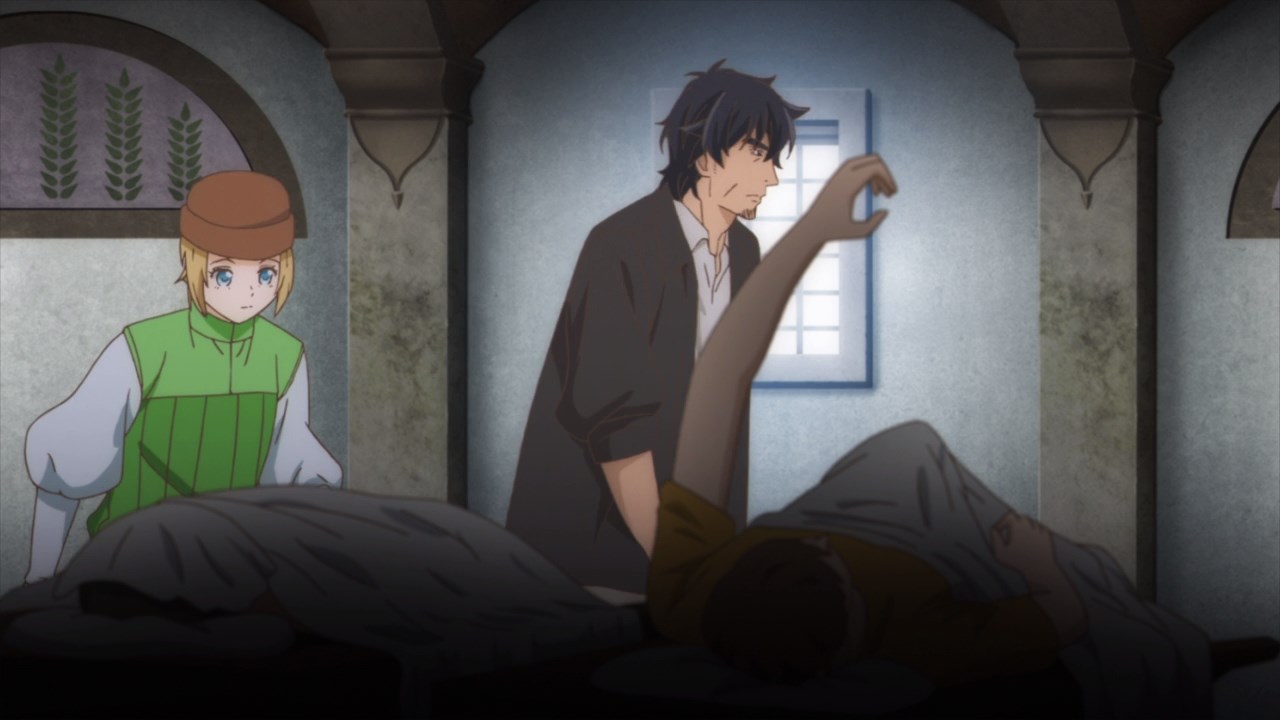 For now, Arte and Leo went to the hospital for some important matters, although she’s a bit confused on why would they go there. 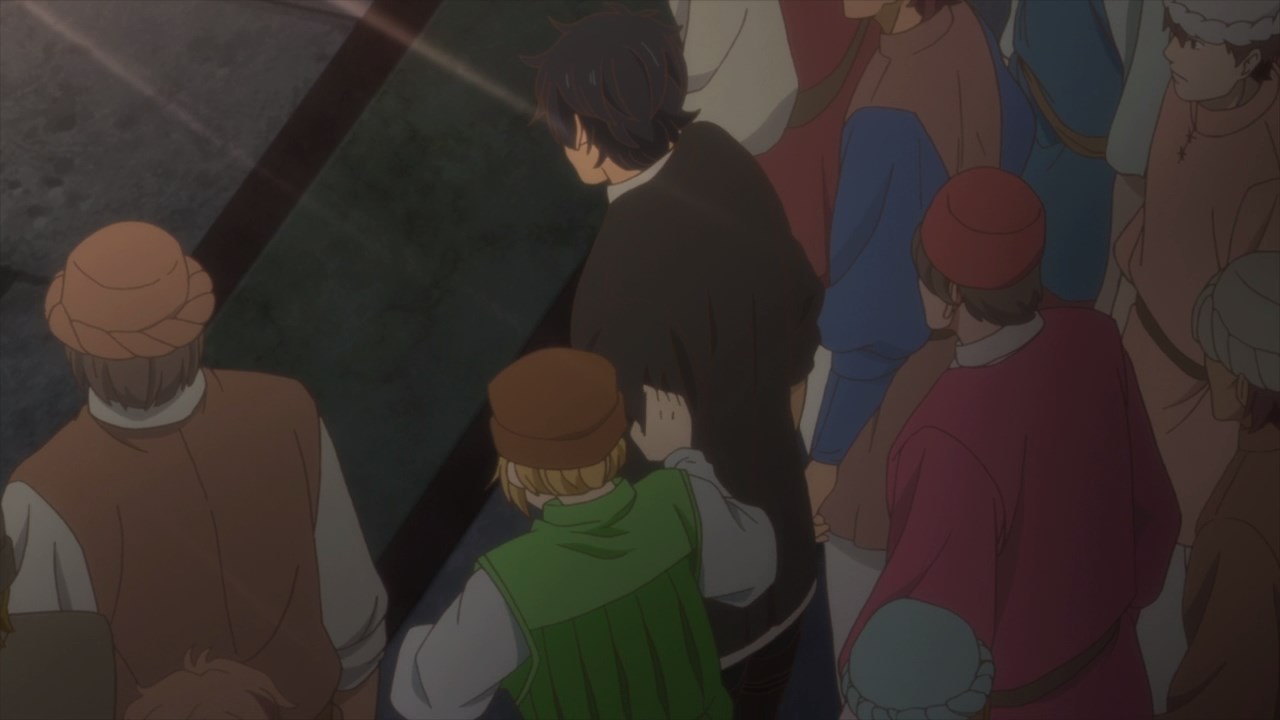 Anyways, both of them will see a group of artisans who are performing an activity that’s deemed illegal by the church. 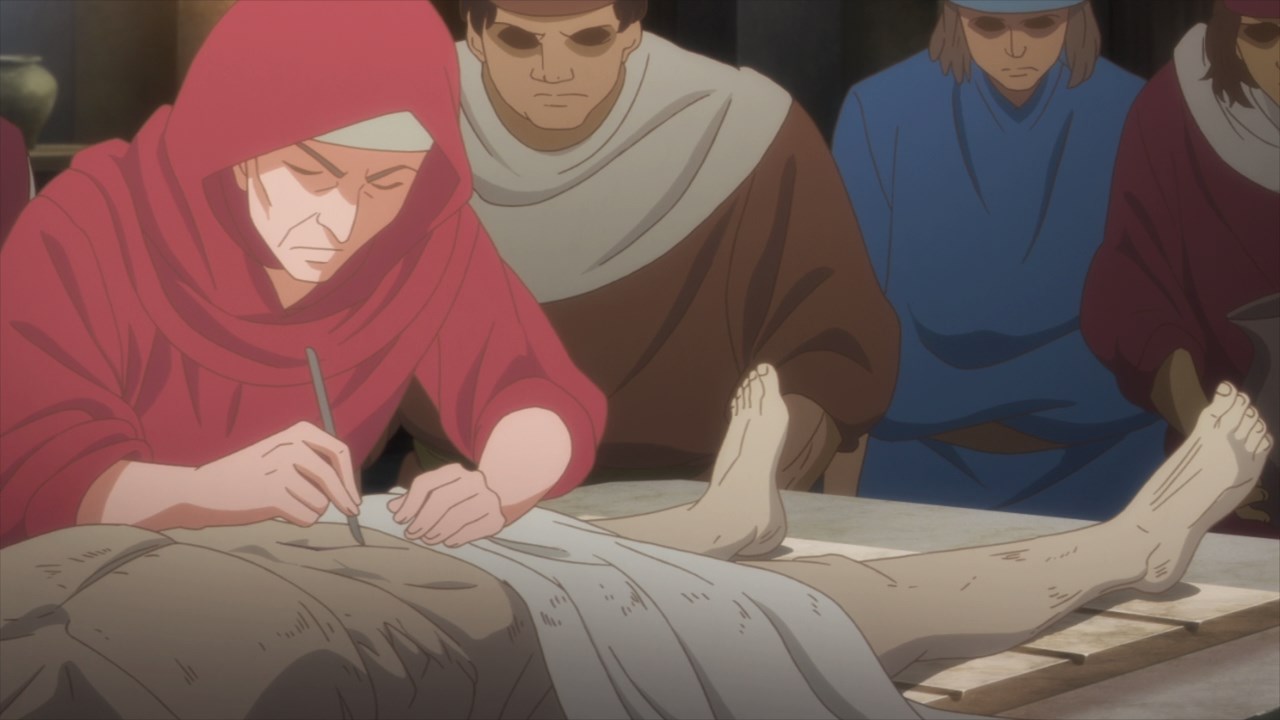 That’s right, it’s dissection and the reason why Leo wanted Arte to go to the hospital is to see this rare sight of artisans checking the body, right down to the organs.

Oh yeah, and the reason for wearing male clothing is because it’s taboo for women to see cadavers being opened up for science. 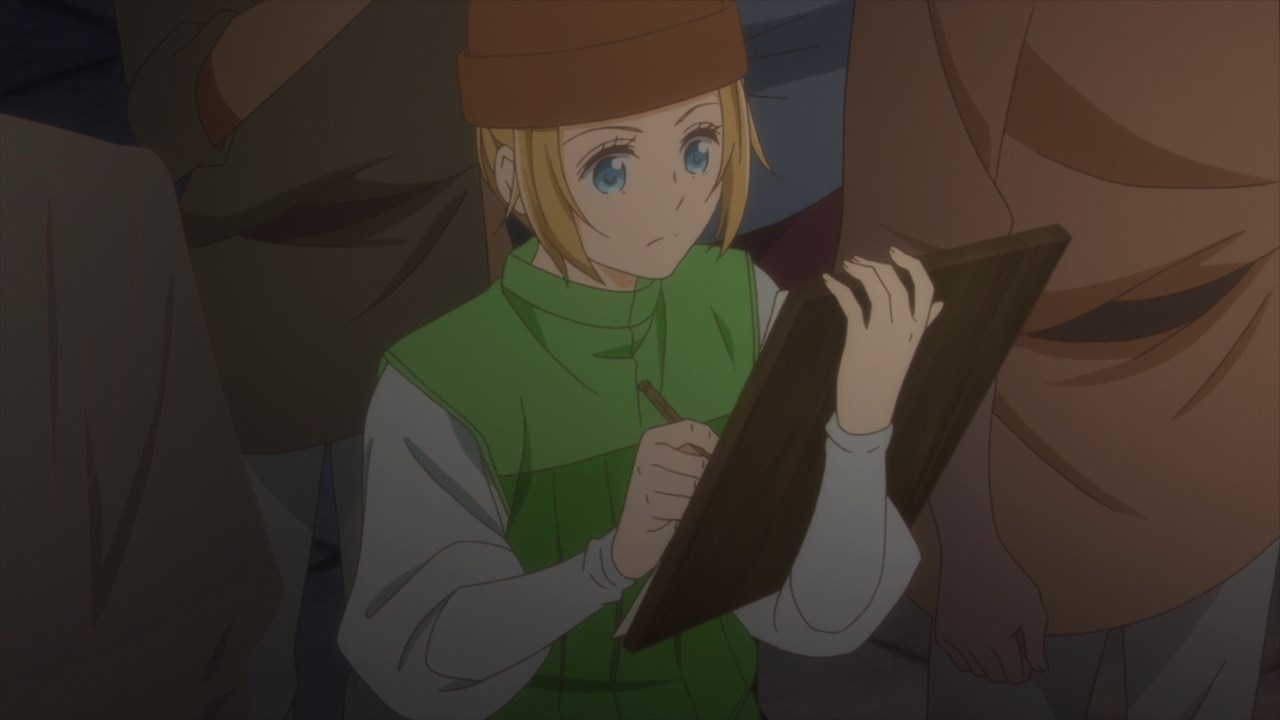 Anyways, Leo told Arte to draw everything she sees during the dissection ’cause it’ll important to understand the proportions of the human body. 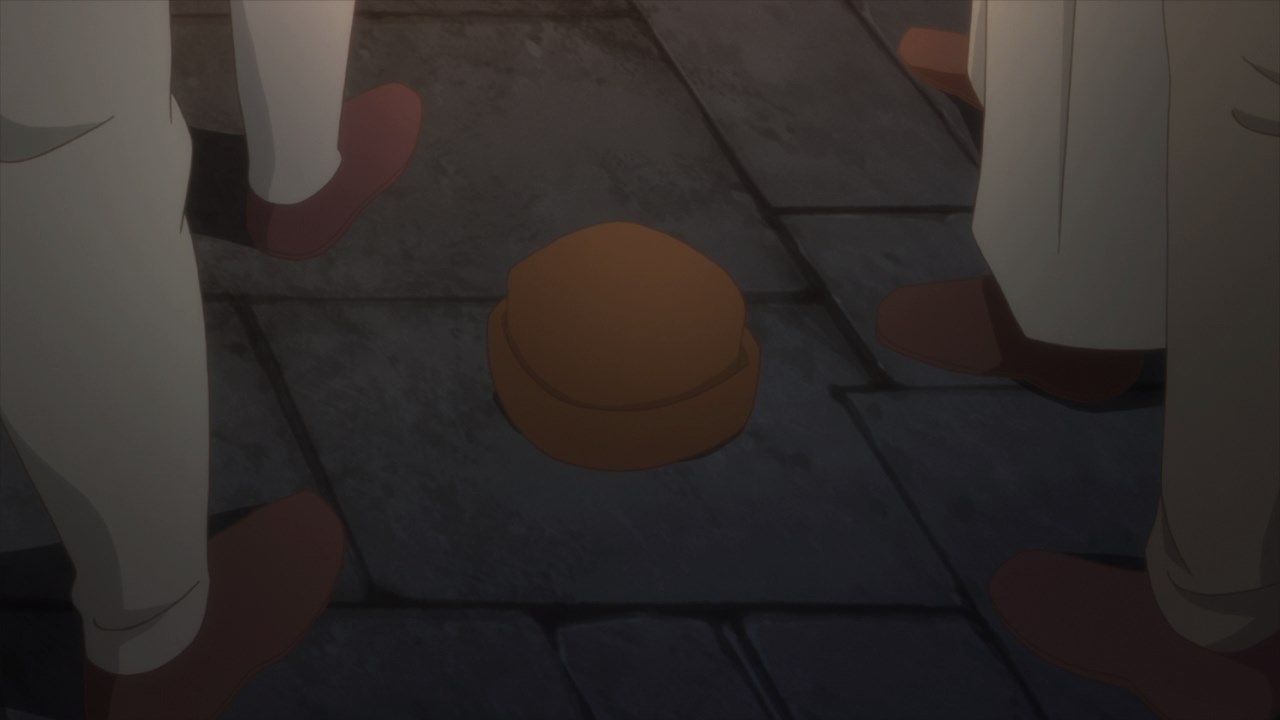 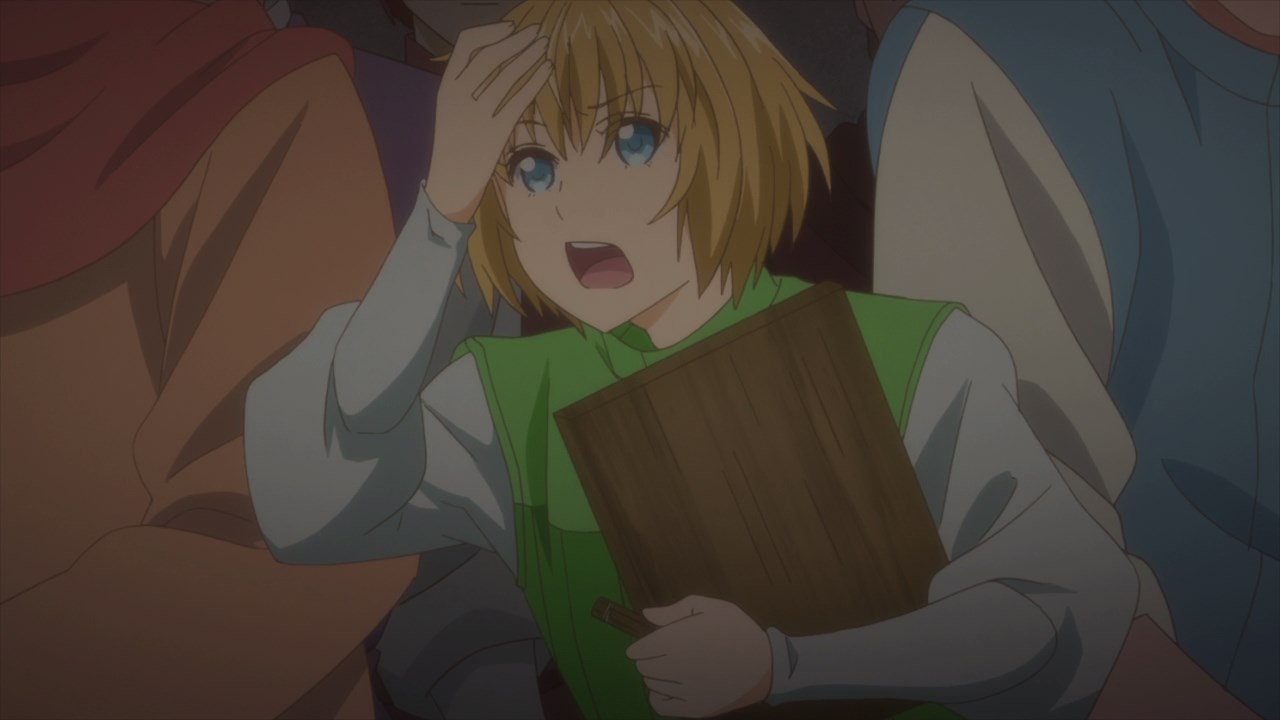 Unfortunately when Arte tries to get closer to the cadaver, she dropped her hat and made a high-pitched yell.

Arte, you shouldn’t cover your mouth or they might suspect you of being a girl! 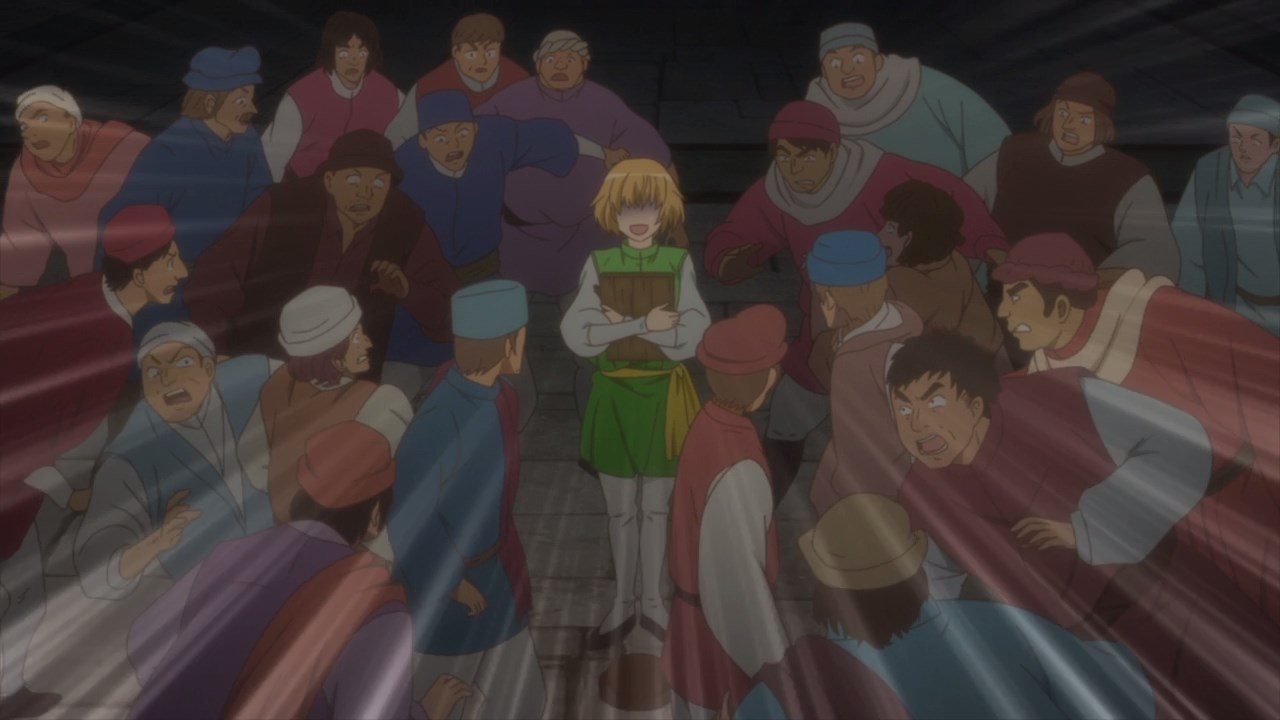 Well, too late now because Arte has blown her cover. There goes her time at the hospital! 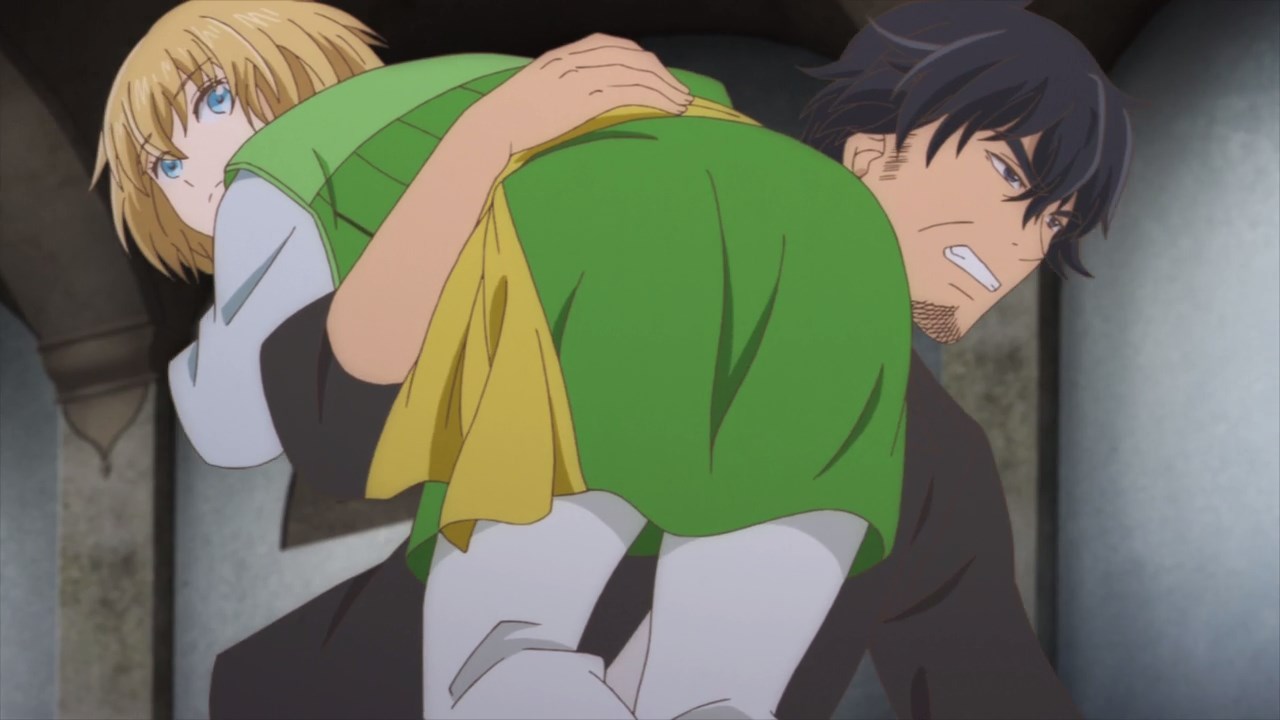 And so, it’s time for Leo to run away as he carried Arte on his shoulders. C’mon, Arte is slow to run that an angry mob might get her quickly. 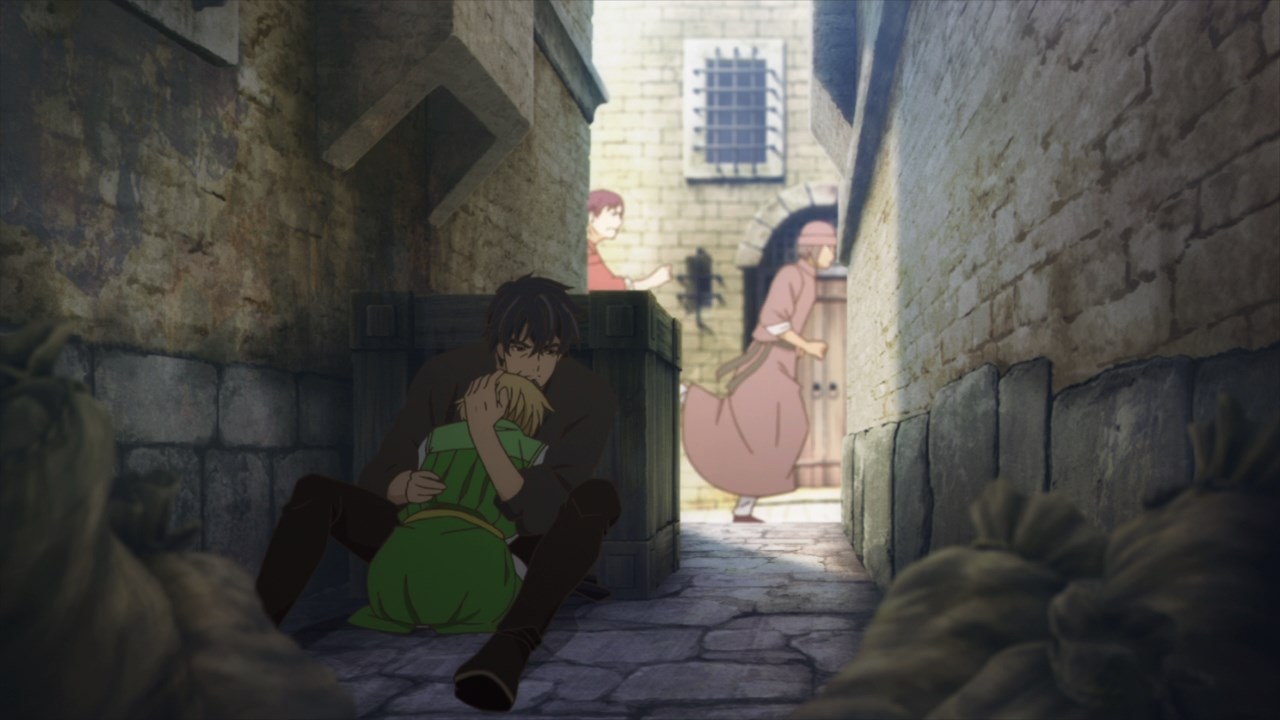 Fortunately, they managed to shake off the angry mob of artisans but man, it’s sucks that they didn’t manage to sketch the entire dissected body. 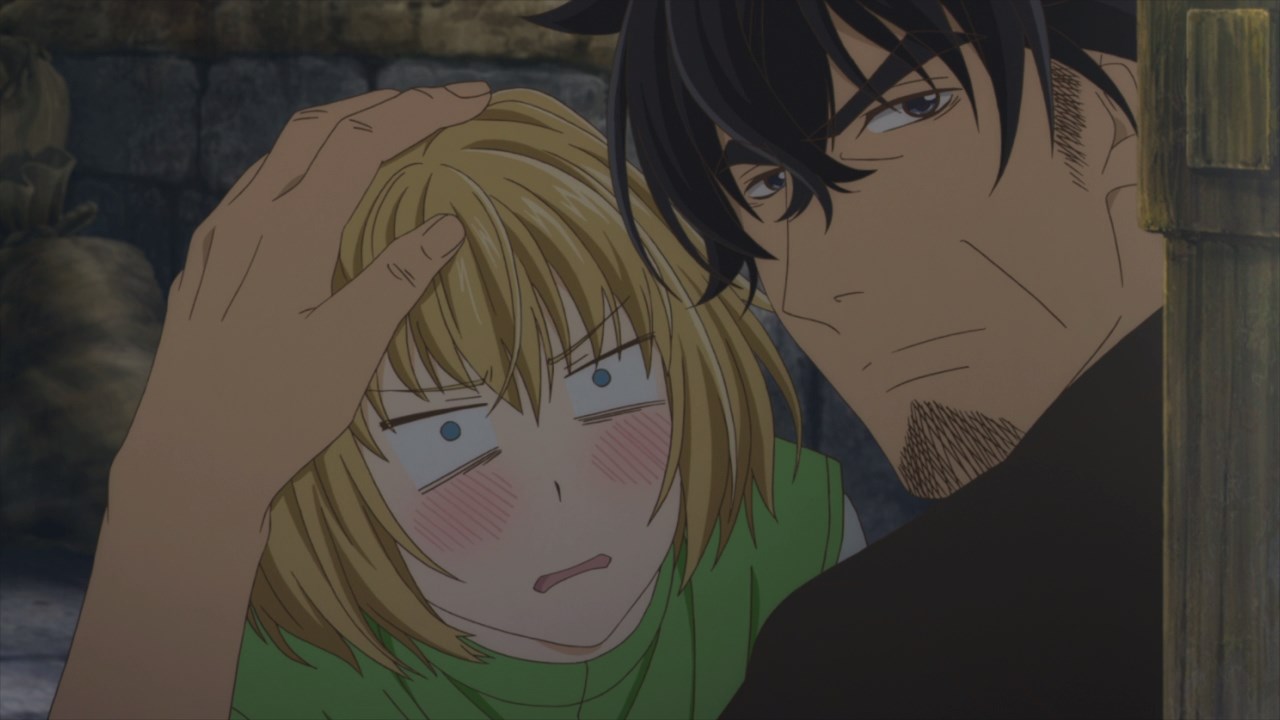 On the other hand, it appears that Arte’s heart is beating fast as she got a bit closer to Leo.

Oh Arte, are you in love with your master? Also, you need to keep distance from Leo since you’re aiming to become an artisan. 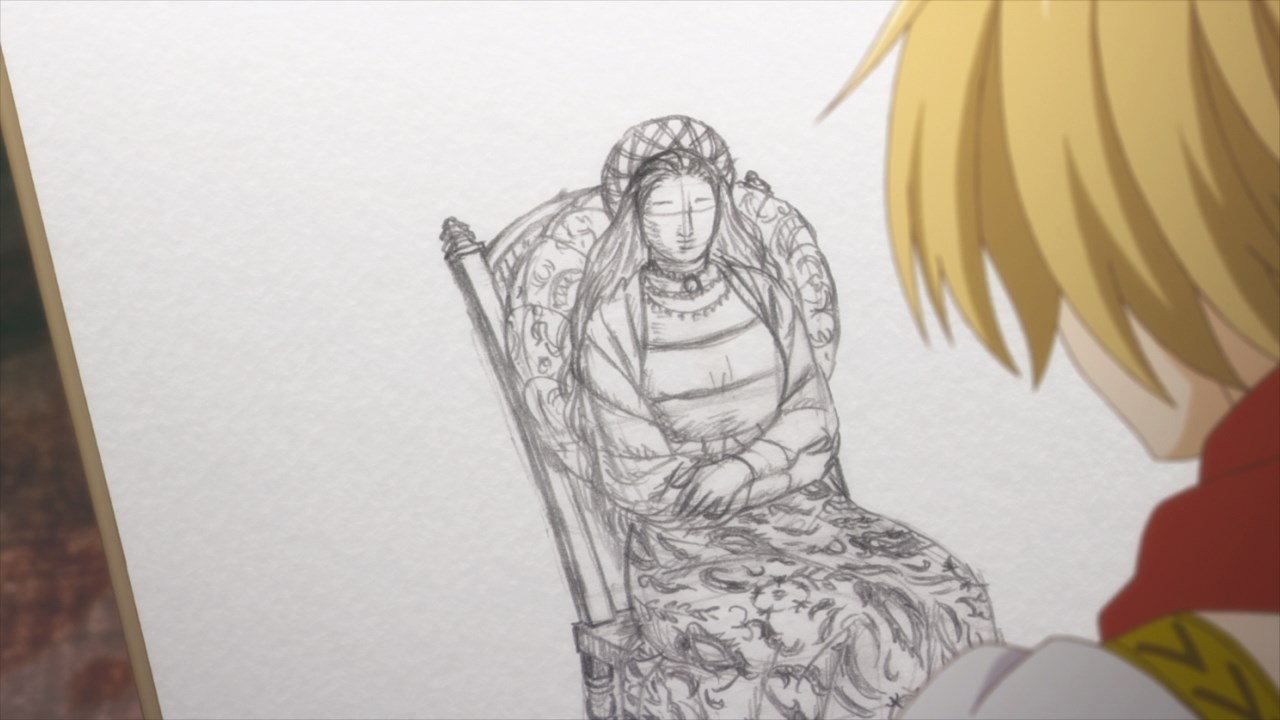 The next day, Leo got a new commission from a nobleman where where he would like to have a portrait painting of a woman standing behind the Arno River. 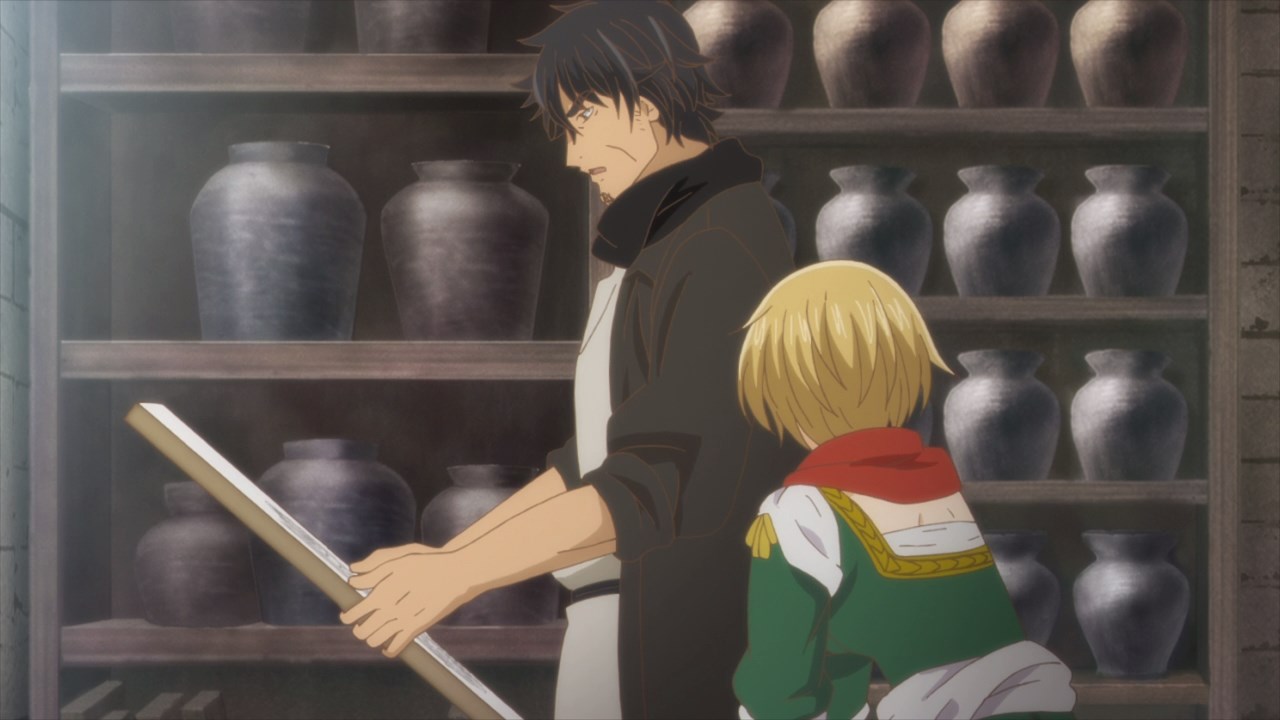 Of course, Leo told Arte to make the background that is fitting for the woman in the painting. Well then, time for Arte to do her stuff now that she has a real job on hand! 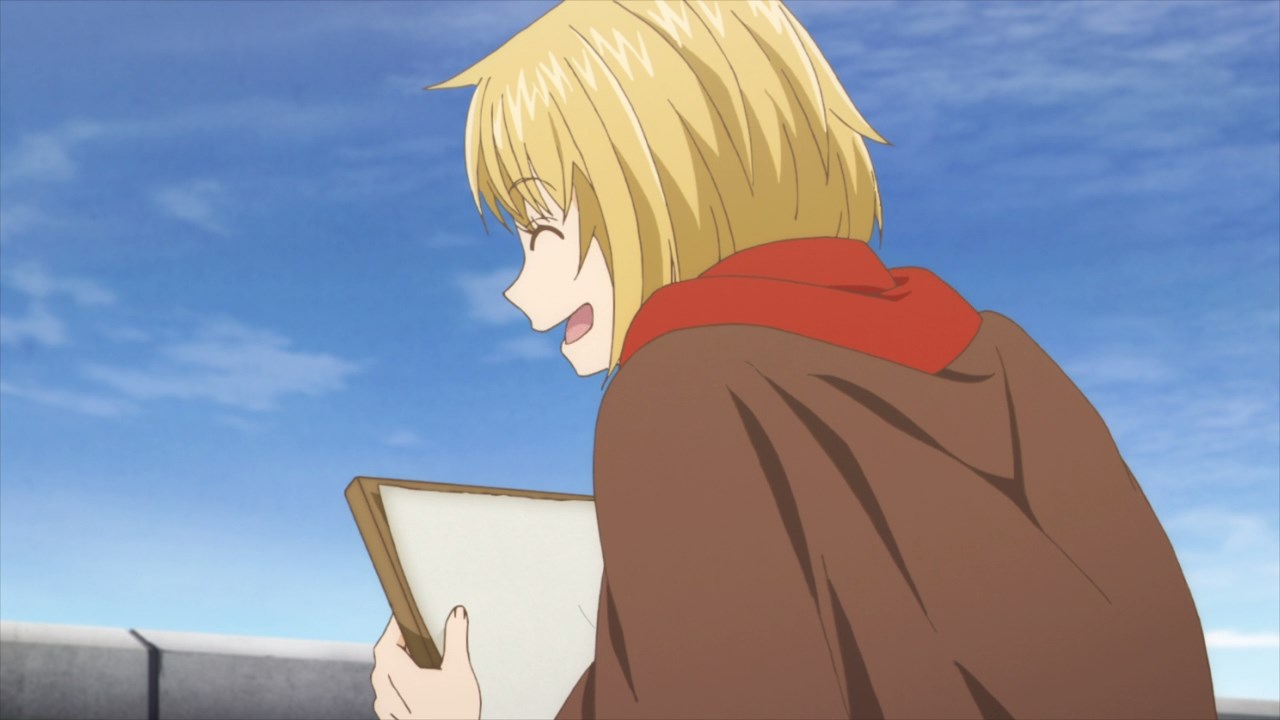 Still, drawing a background is not easy as Arte will do many takes until her master gets the approval, so good luck to this apprentice! 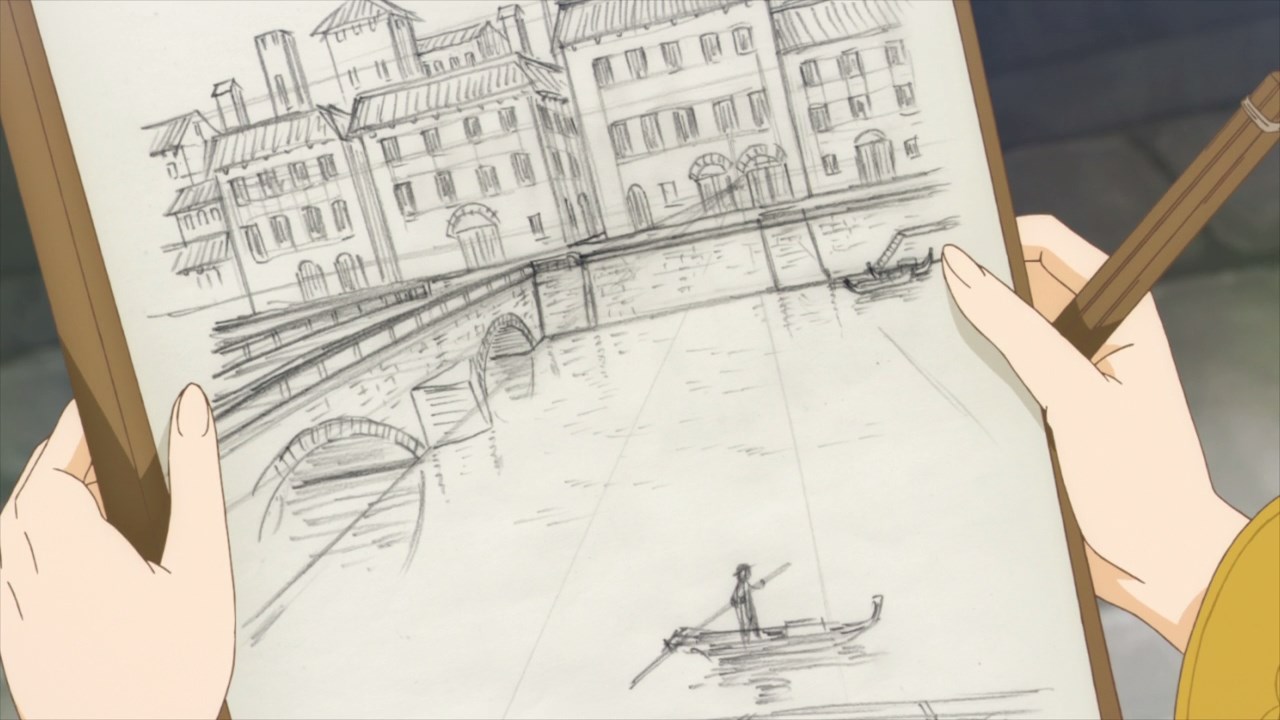 But hey, Arte is done drawing the Arno River that would be used as the background. 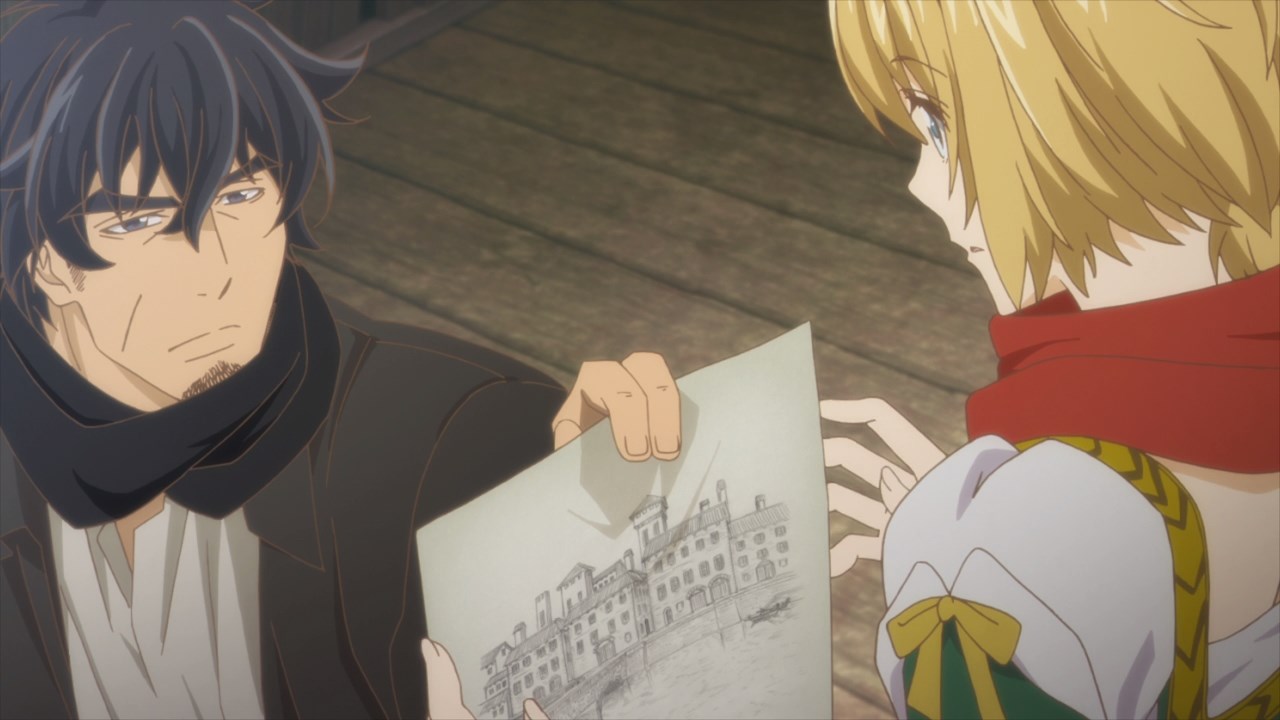 And then, it gets rejected by Leo as he told Arte to do it again. Yeah, it’s not easy to make a background that fits the painting of a woman. 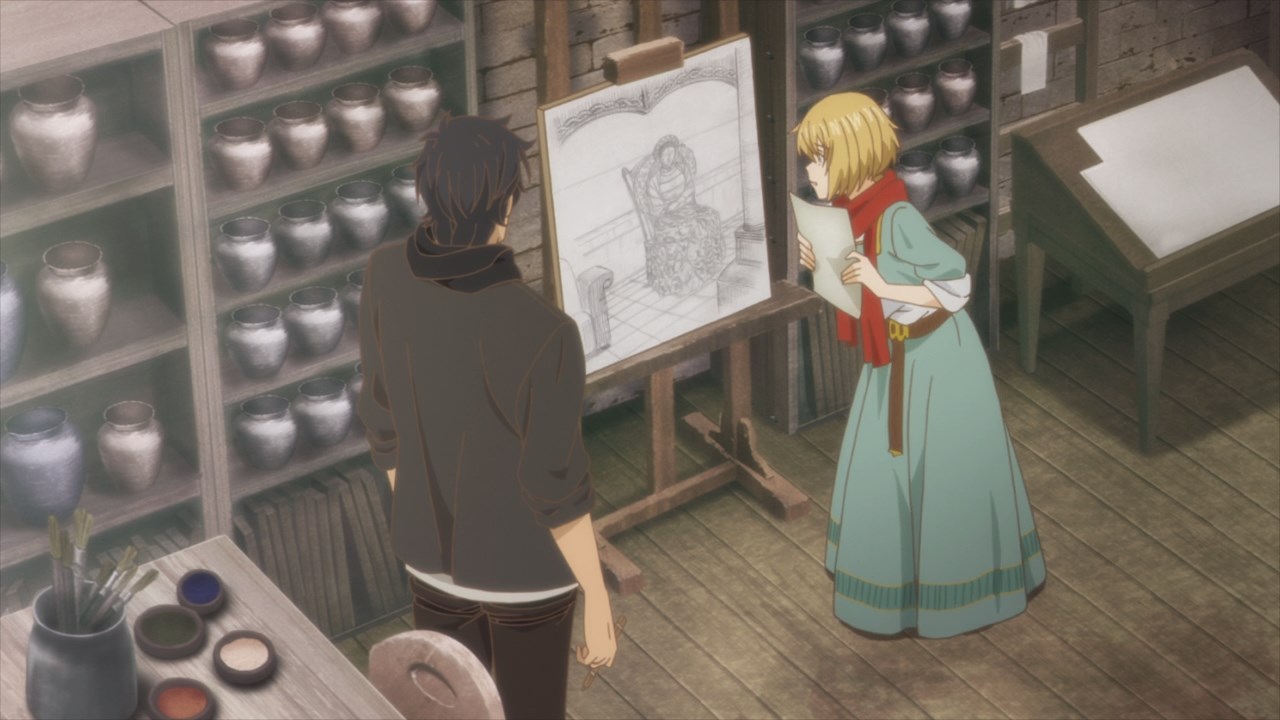 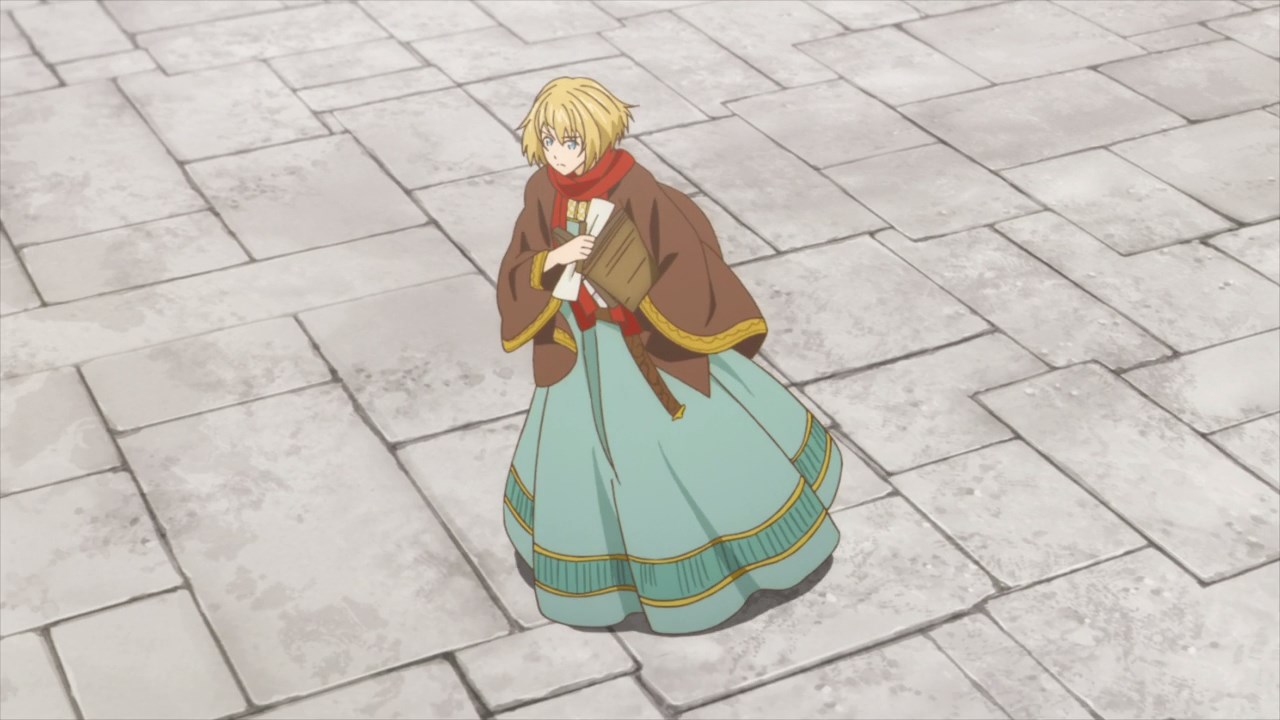 Well then, time for Arte to go back at the Arno River and sketch the landscape that would fit the painting. Let’s hope that she does it right this time! 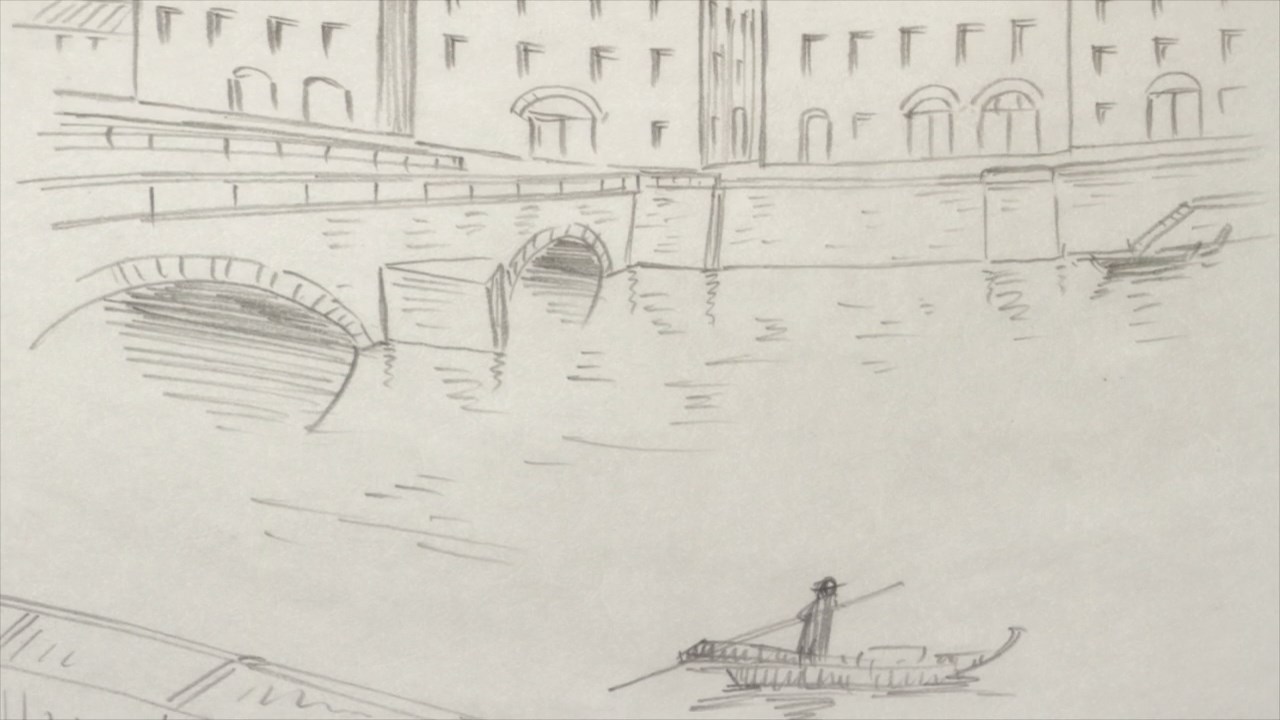 But anyways, here’s her rough sketch of the Arno River where she doesn’t emphasize on the background much. I mean, the client wants a painting of a woman after all. 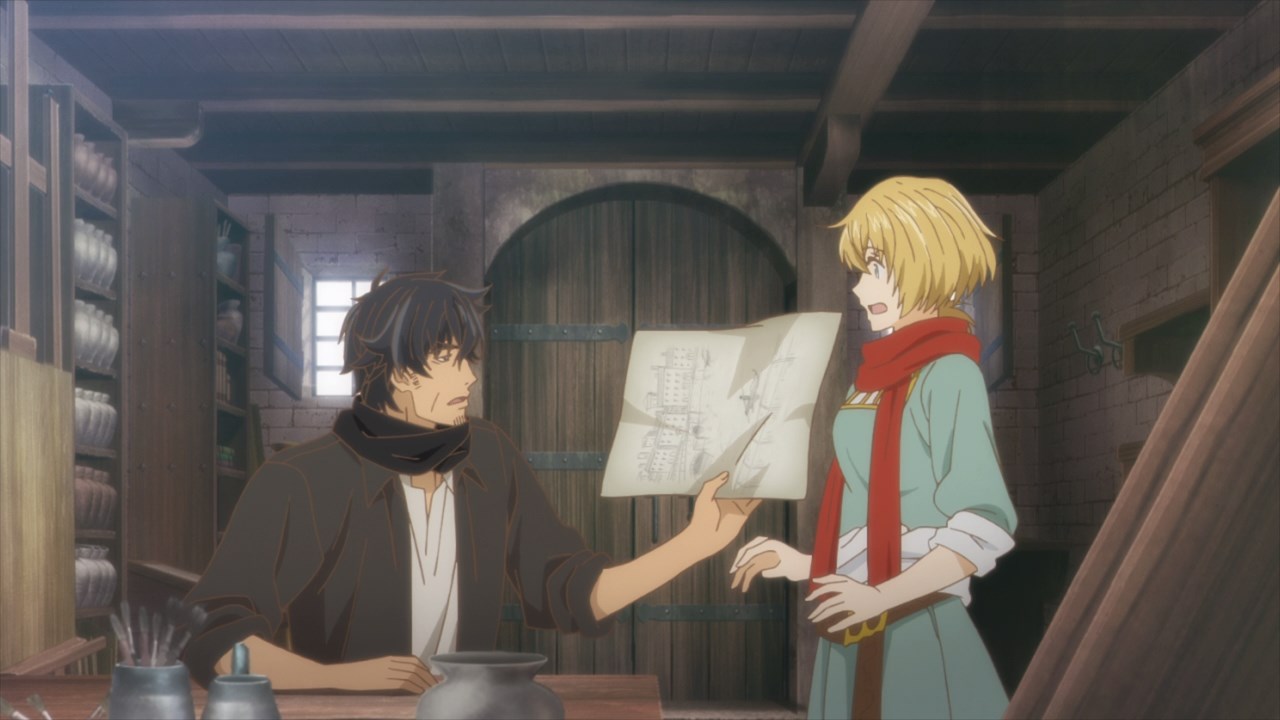 But as for Leo, looks like he approved Arte’s background sketch as he told his apprentice to help him on finishing the painting.

Glad that Arte got it right but now it’s time for the fun part of making a portrait painting as she helps Leo on putting the finishing touches. 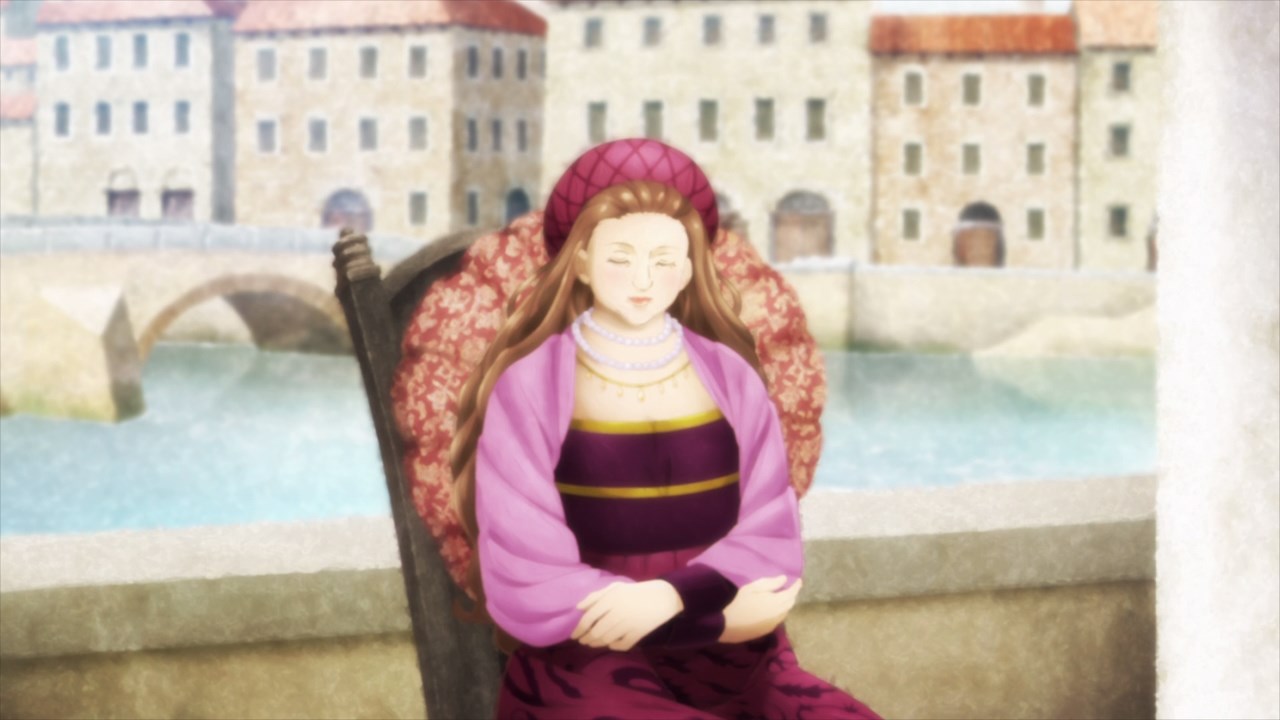 In any case, here’s the finished product as they finally finished the painting just in time. 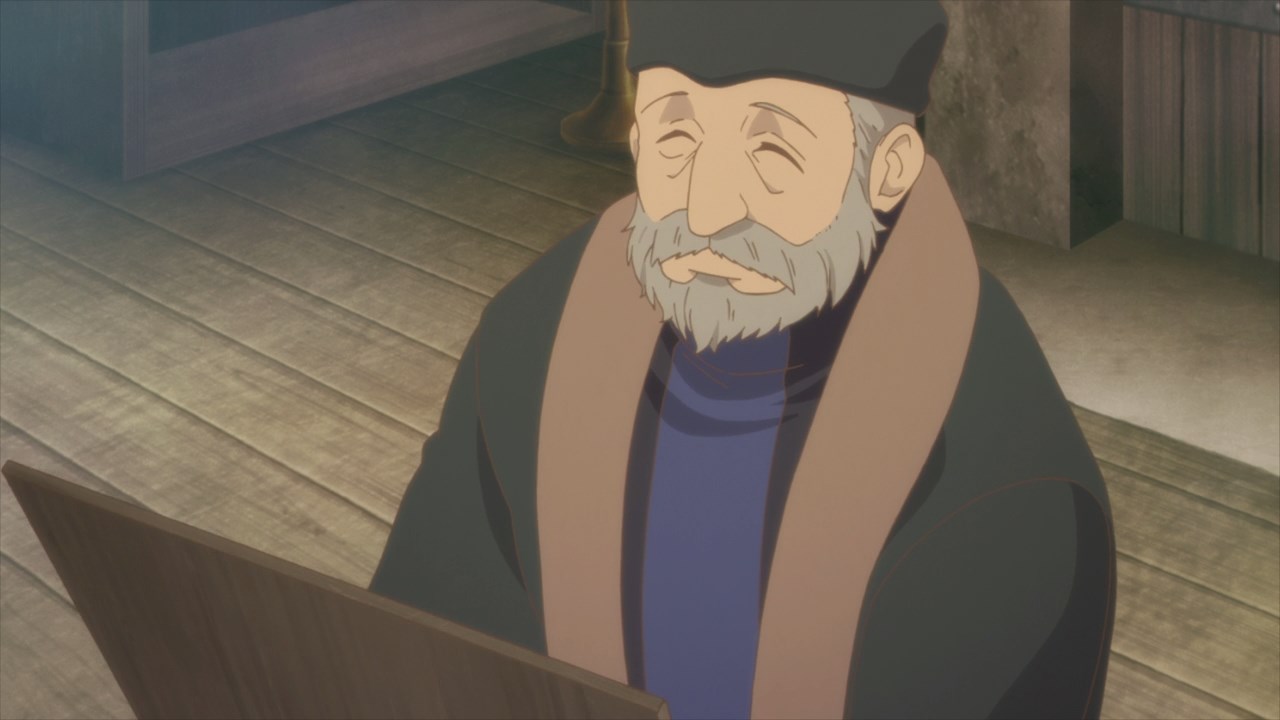 And as for the client, looks like he loves it. Gotta say that Arte did a good job on her first work on assisting Leo. 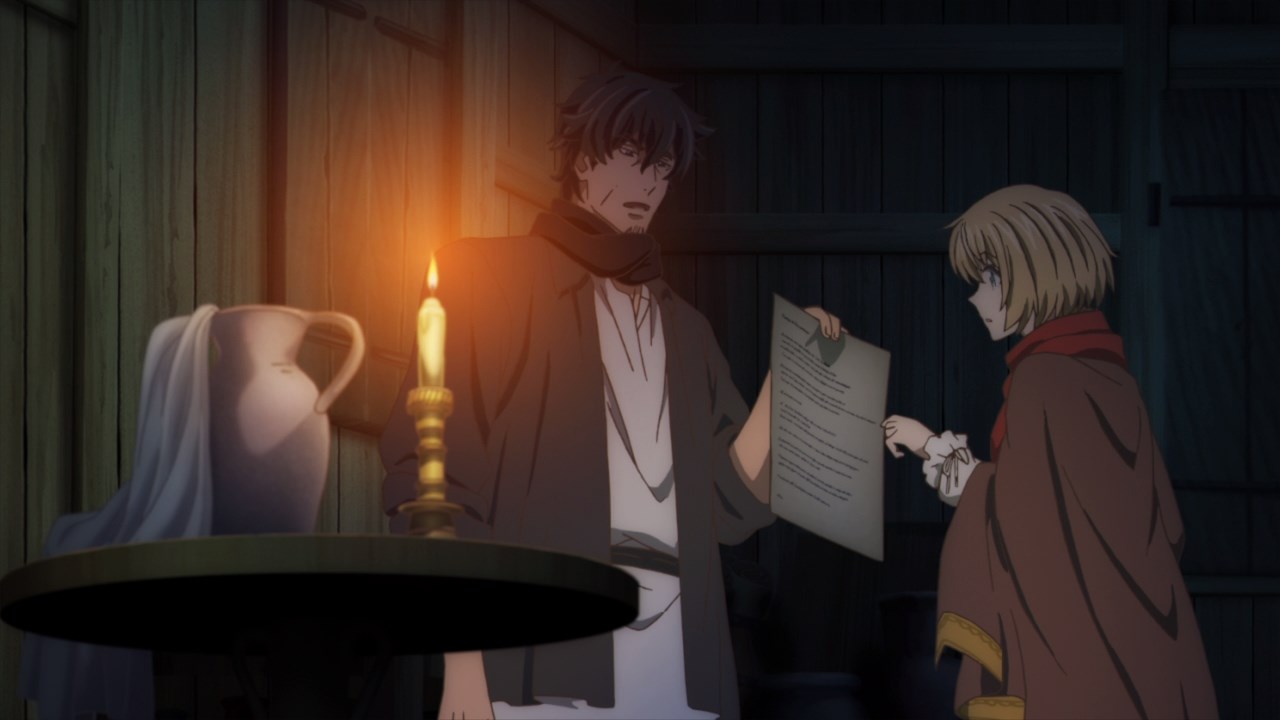 Speaking of Arte, looks like Leo has some good news as her contract has been extended. Oh, and her contract fee has gone up which means that she can buy extra candles should Arte wants to draw in the middle of the night. 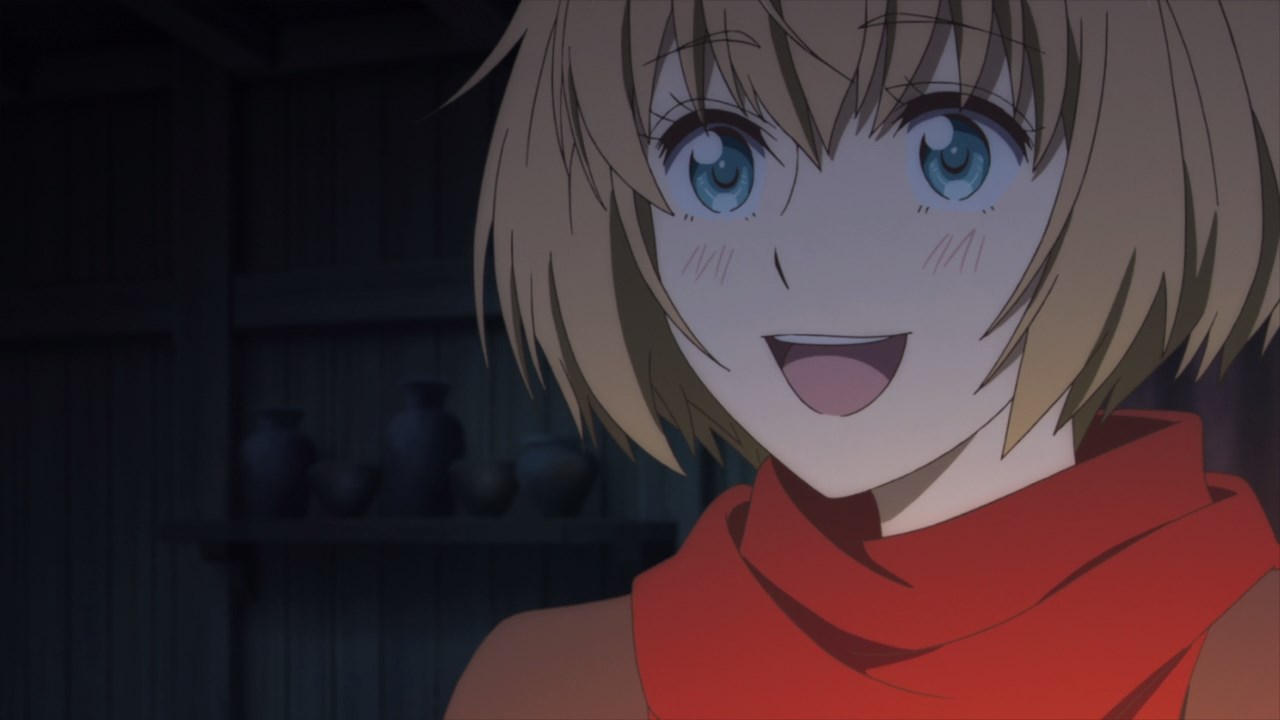 And sure that she’s happy about getting some extra cash, Leo warned Arte not to think about being a nuisance or overthinking about unnecessary things.

Anyways, that’s about it for this episode and let’s hope that Arte will get wiser as she pursues her dream as an artisan. Then again, it seems that her dream might get side-lined now that Arte has somewhat fall in love with Leo. But you know what, let’s see what happens next time!