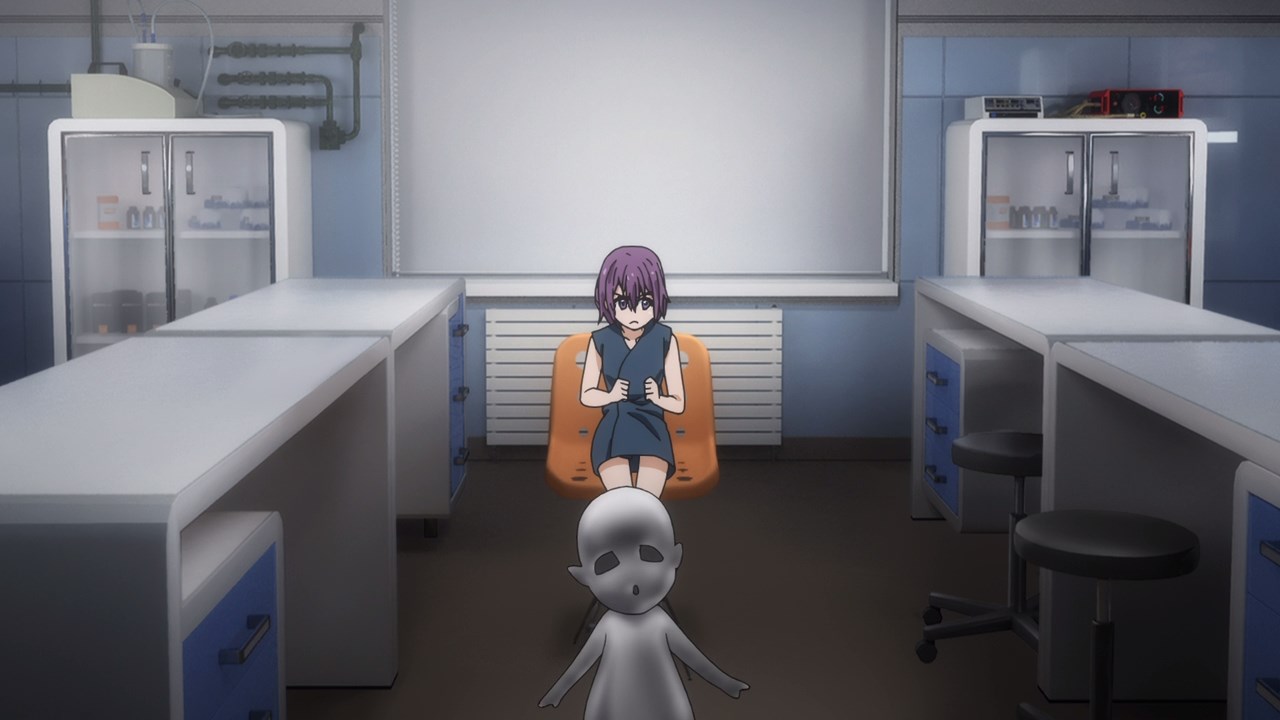 Well everyone, it’s time to watch the epilogue of the Daihasei Festival Arc where we start things off with another flashback.

And as you can see, we have a young Mitori Kouzaku who’s making animated dolls out of liquid metal. Yeah, she haven’t mastered it yet. 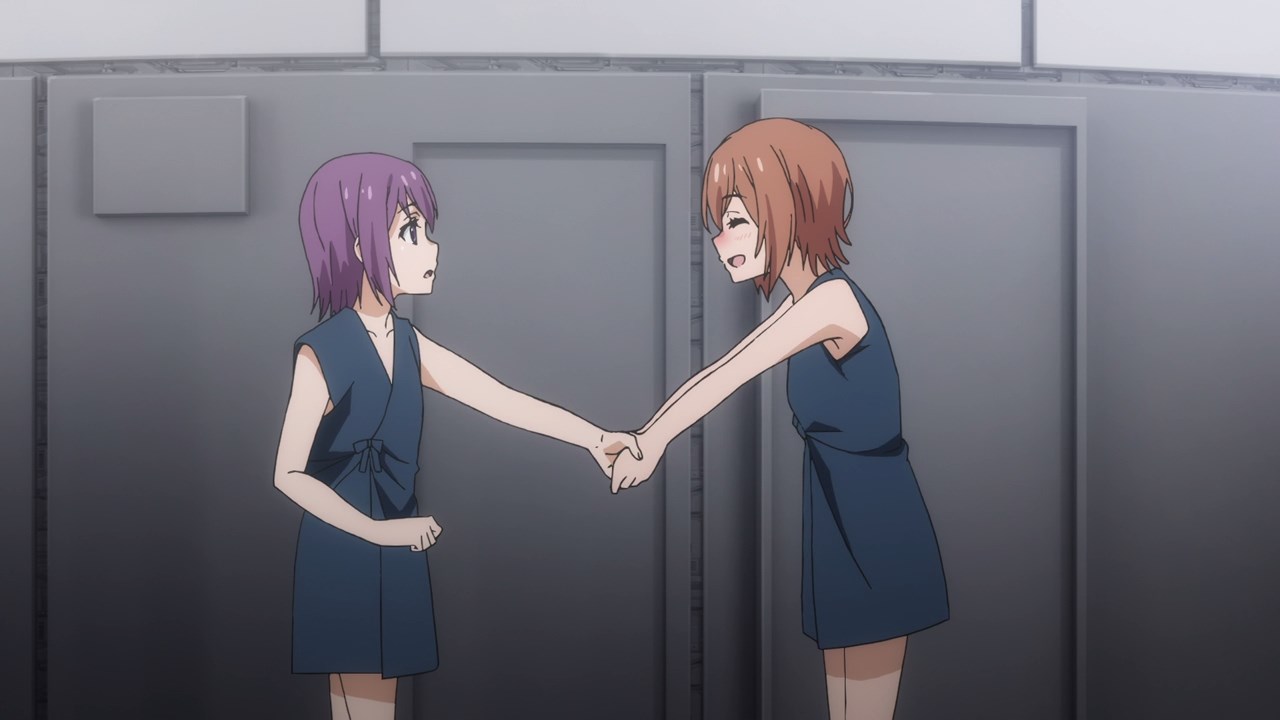 Anyways, Mitori met Dolly where it’s confirmed that she really met the prototype of the MISAKA Sisters, although Kouzaku is not aware at that time about the connection between Dolly and Mikoto Misaka. 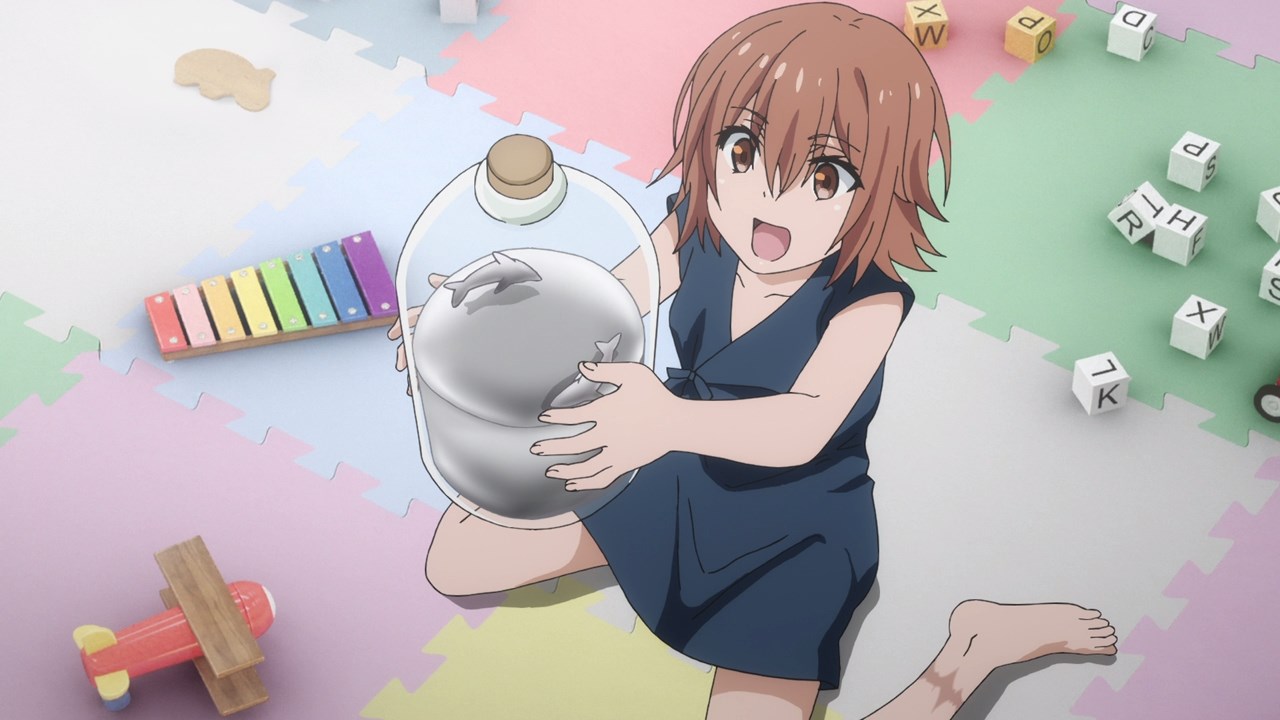 Still, both Mitori Kouzaku and Dolly had fun where the latter wanted to see the ocean someday. Of course, everything changed when Mitori saw Dolly’s scars in which she simply left. 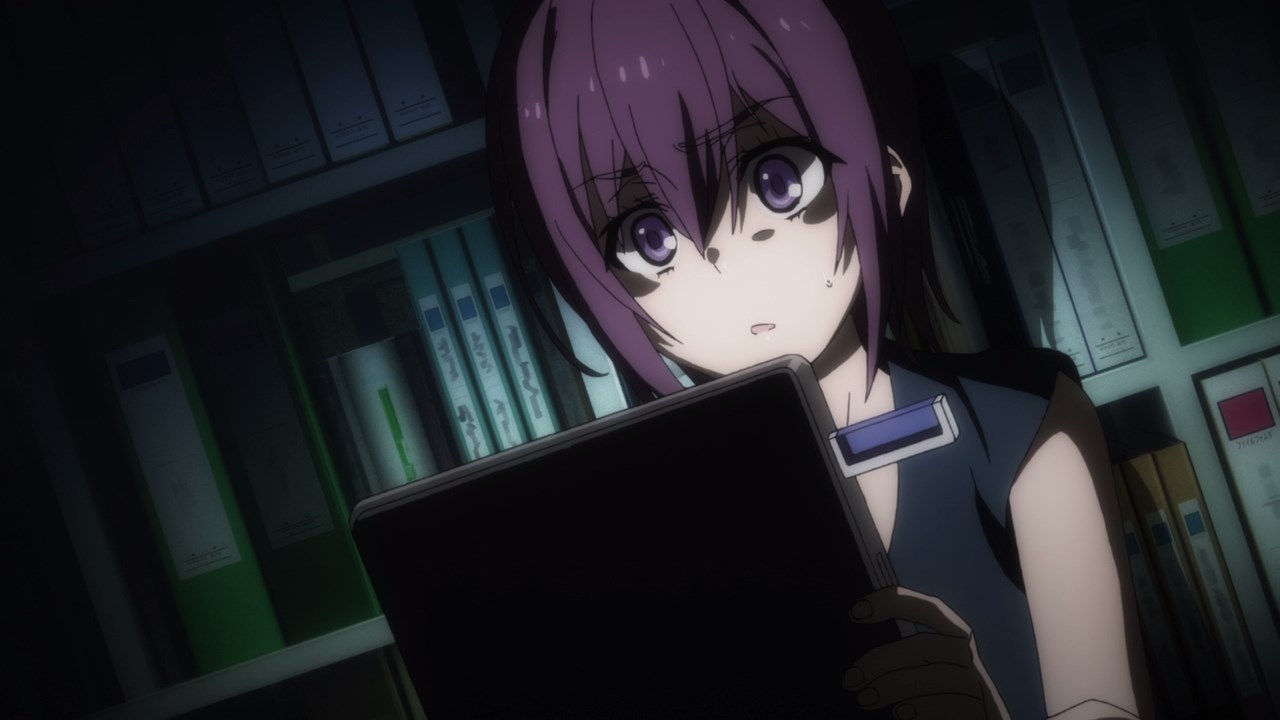 Then again, Kouzaku didn’t just leave the building and never returned as she dig some information in regards to Dolly.

This shocked Mitori in regards to Dolly’s role of being the originator to the MISAKA Network that she told the scientists not to conduct experiments on her friend. 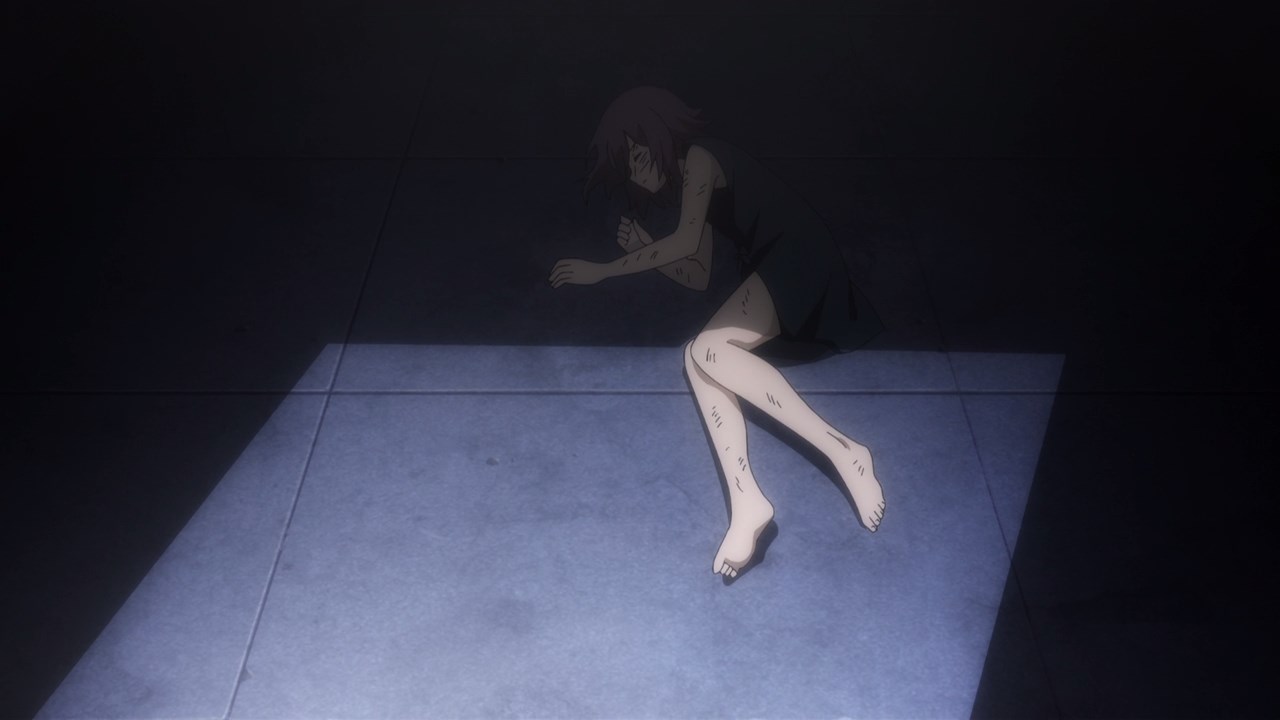 Of course, the scientists refused to save Dolly so instead they called the guards to detain Kouzaku and put her to a cell.

Because of that, Dolly thought that Mitori is gone for good, but the truth is that the scientists kept her somewhere because they feared that Kouzaku might expose their heinous experiments. 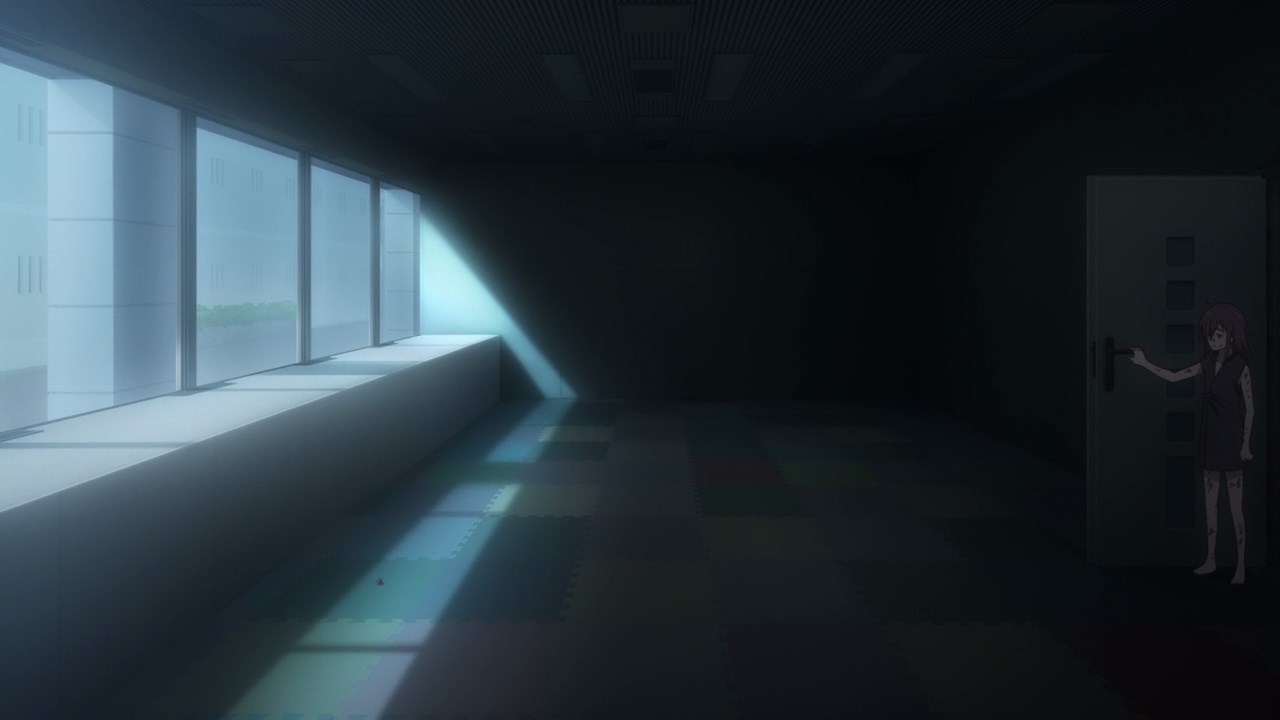 However, Mitori Kouzaku got out of the cell and when she went to the facility to find Dolly, Mitori was too late as everything is gone. Heck, she feels that Dolly is already dead.

And so, Kouzaku went on the path of vengeance on those who mistreated Dolly. 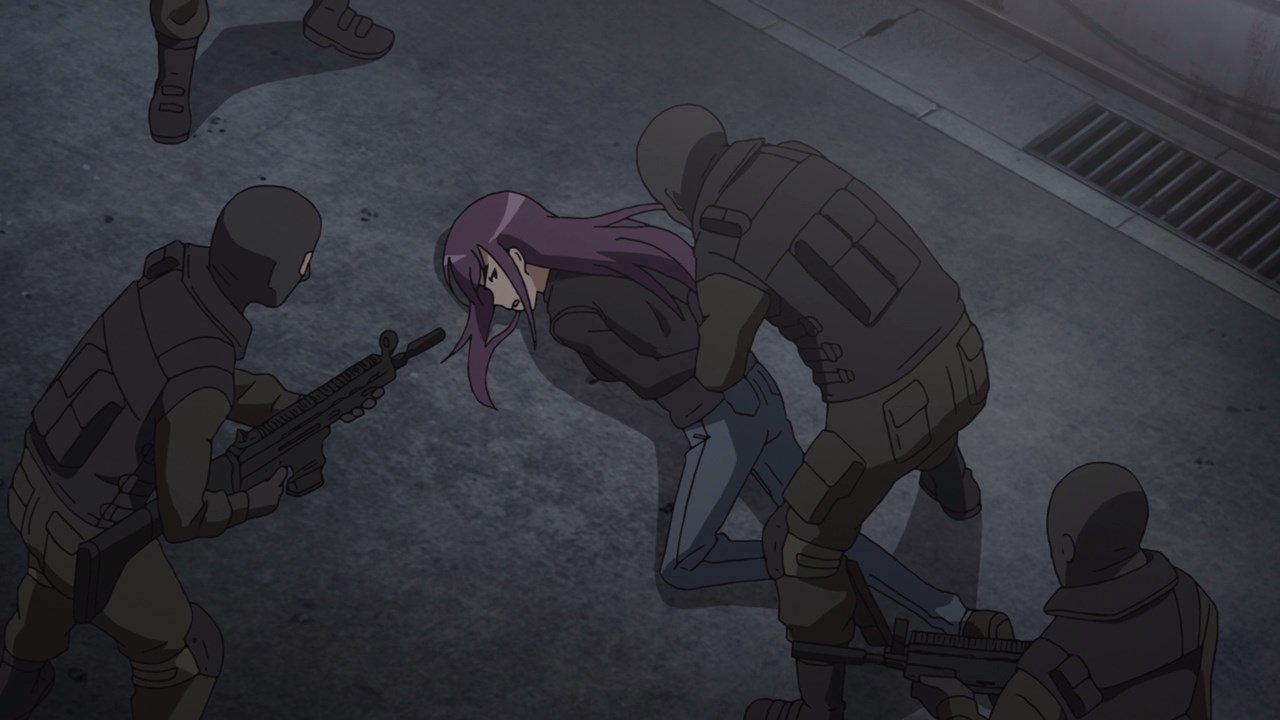 But then, Mitori was detained by the police for attempting to destroy a skyscraper, which contains Misaki’s enlarged brain, and put her to a reform school.

And although they say that Kouzaku is already dead upon being detained at the reform school, that was just a cover-up. 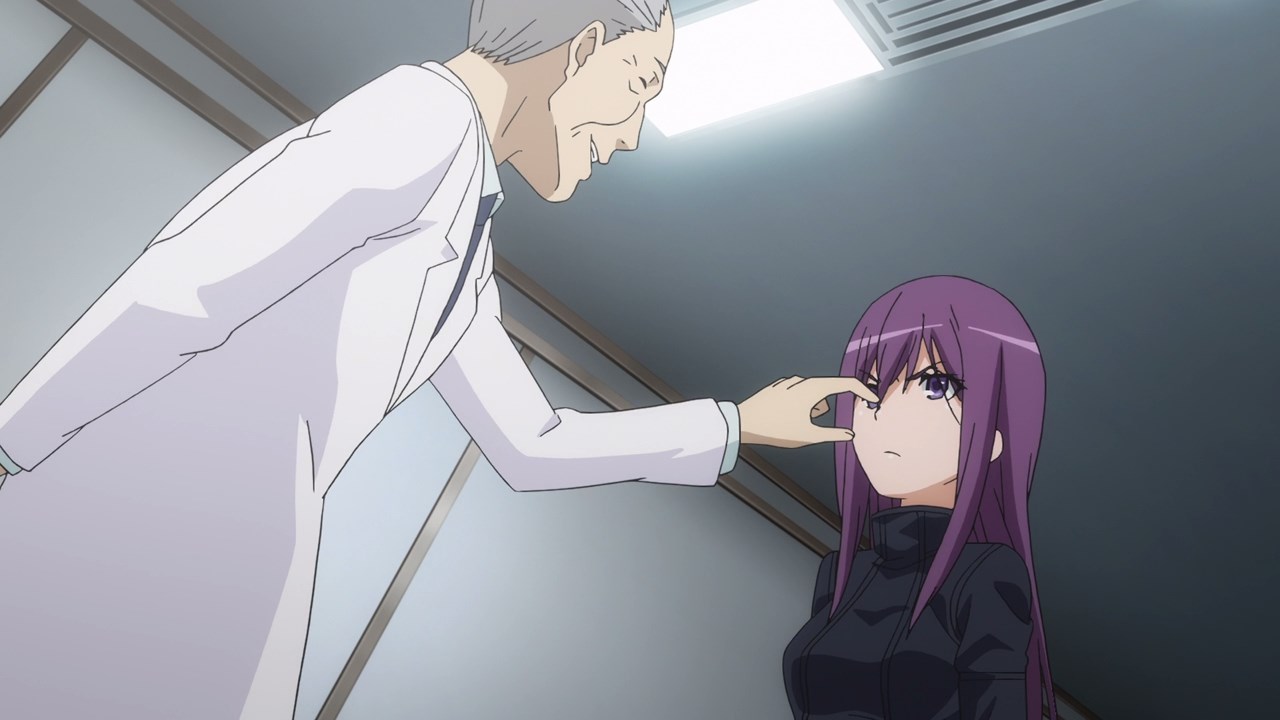 Instead, Gensei Kihara took Mitori Kouzaku where he wants her help to turn Mikoto Misaka into Level 6. And Gensei’s plan would be successful if it wasn’t for Misaki Shokuhou and Touma Kamijou ruining it. 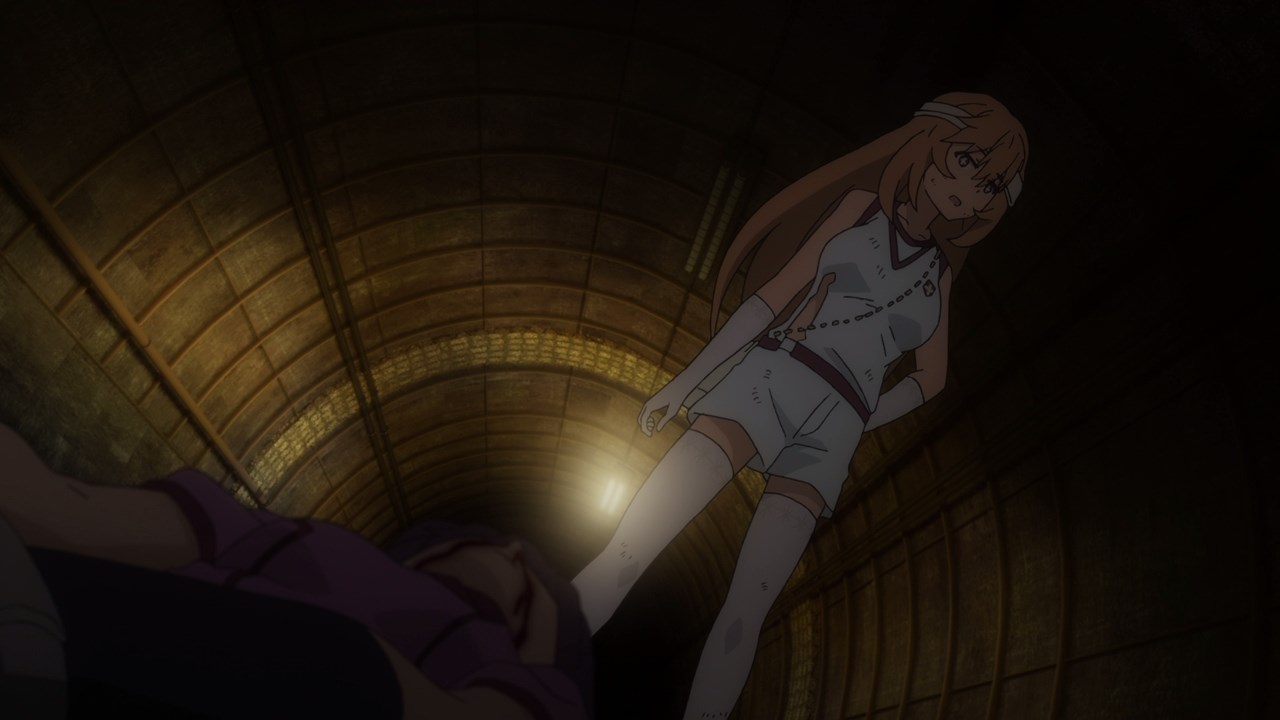 But now, it’s time to really close the chapter of this story arc as Misaki Shokuhou confronted Mitori Kouzaku. However, Misaki is not planning to kill Mitori off or even erase her memories… 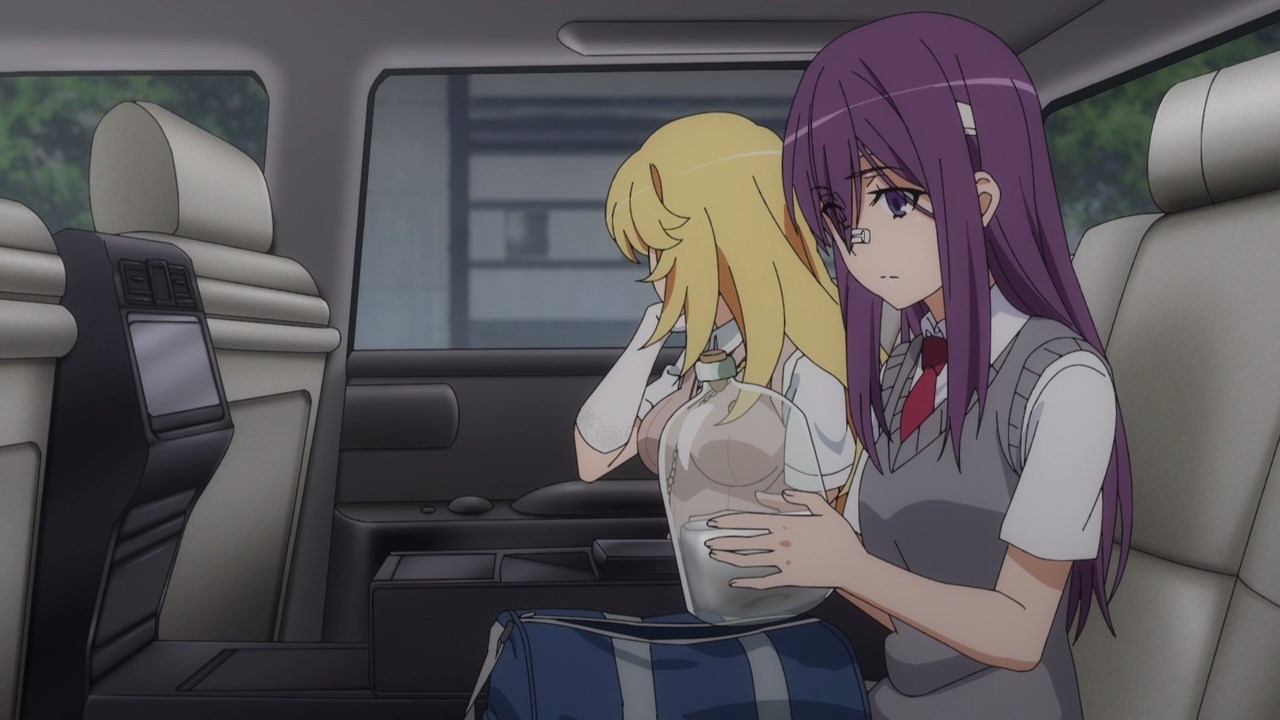 Instead, she took Kouzaku to a facility where it said that the prototype of the MISAKA Network secretly resides there. Wait, don’t tell me that Dolly is not dead!? 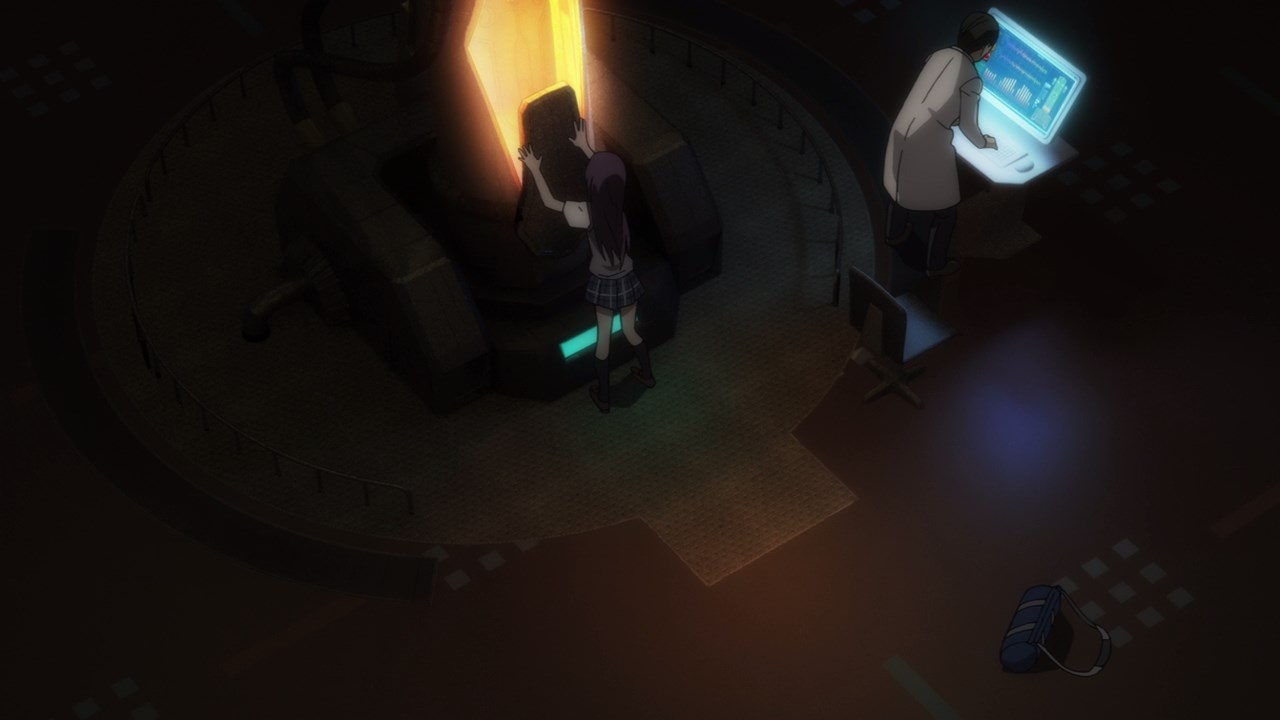 Turns out, Dolly is alive as she was kept inside a tank. And I must say that not only Mitori Kouzaku is surprised to see her friend again, but even I got the same reaction as Kouzaku. So how did Shokuhou knows Dolly’s location?

Actually, it turns out that it’s not the real Dolly, but rather its younger sister where Misaki learned its existence upon checking Gensei’s memories. Of course, the younger Dolly retains the memories of the now-deceased older one so she can still remember everything.

And so, Mitori Kouzaku has finally reunited with Dolly where she’s happy to see her friend for such a long time. 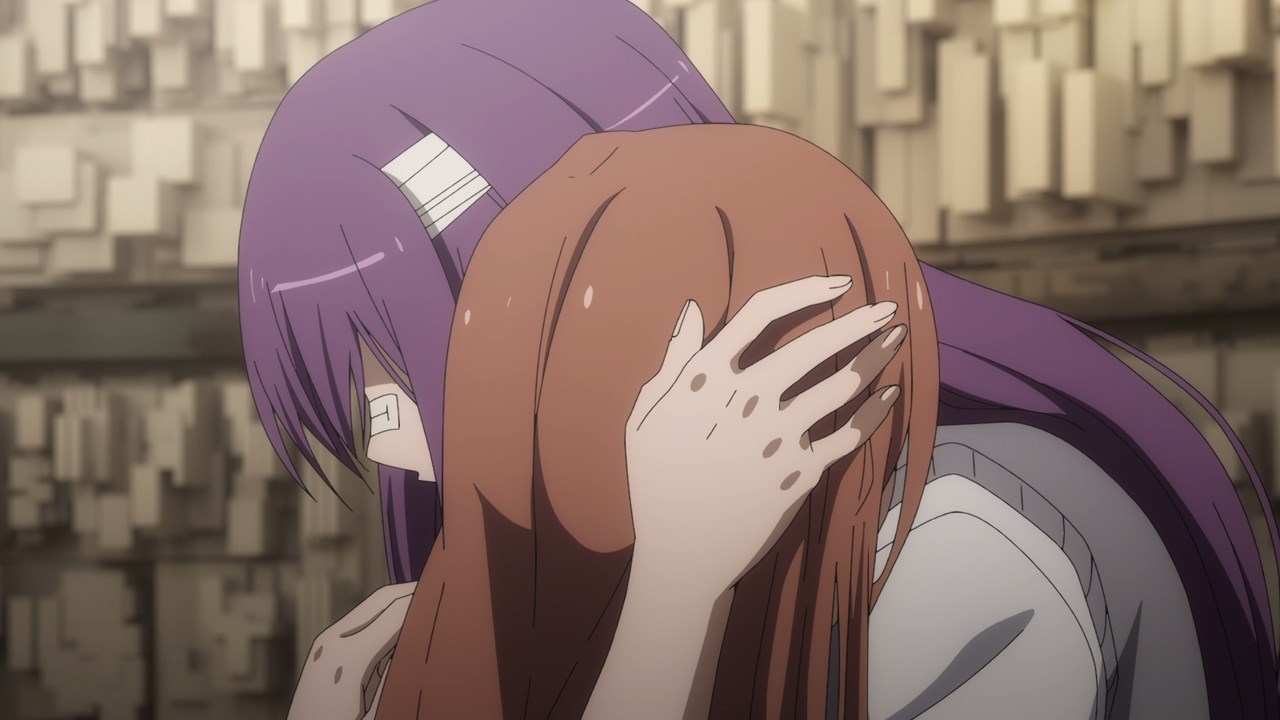 I have to say that for all the bad things that she did during the arc, like taking Kazari Uiharu and Misuzu Misaka as hostages, Mitori is treated as the victim in the end.

Then again, it would be better if she was detained by Anti-skill because of her crimes that almost destroyed Academy City. 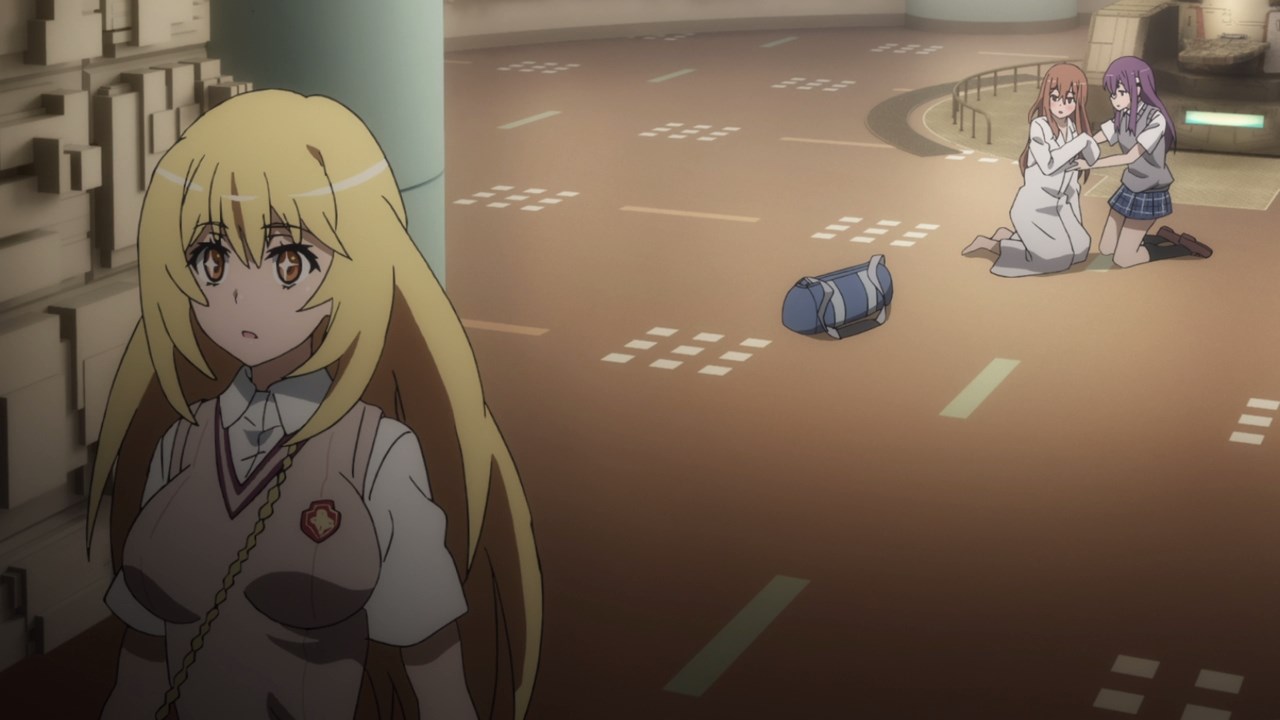 On the other hand, Dolly wants to see Misaki Shokuhou again but it appears that the Level 5 esper doesn’t want to approach her long-time friend. 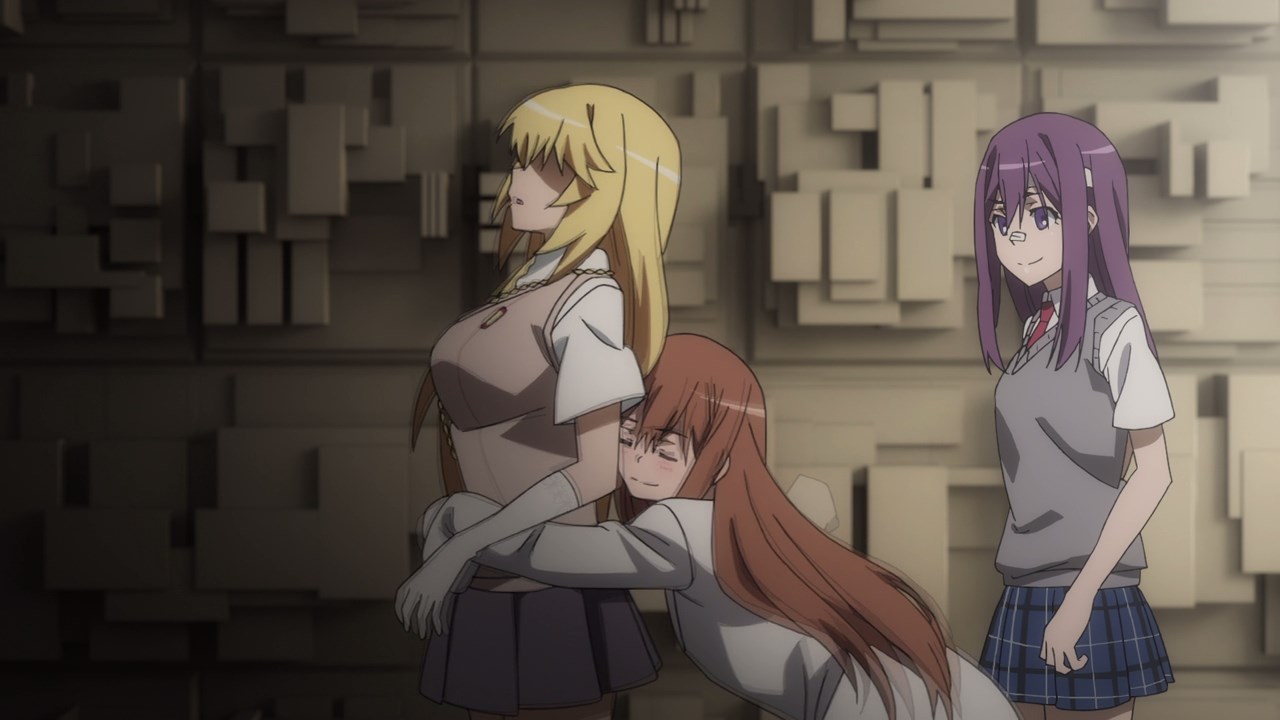 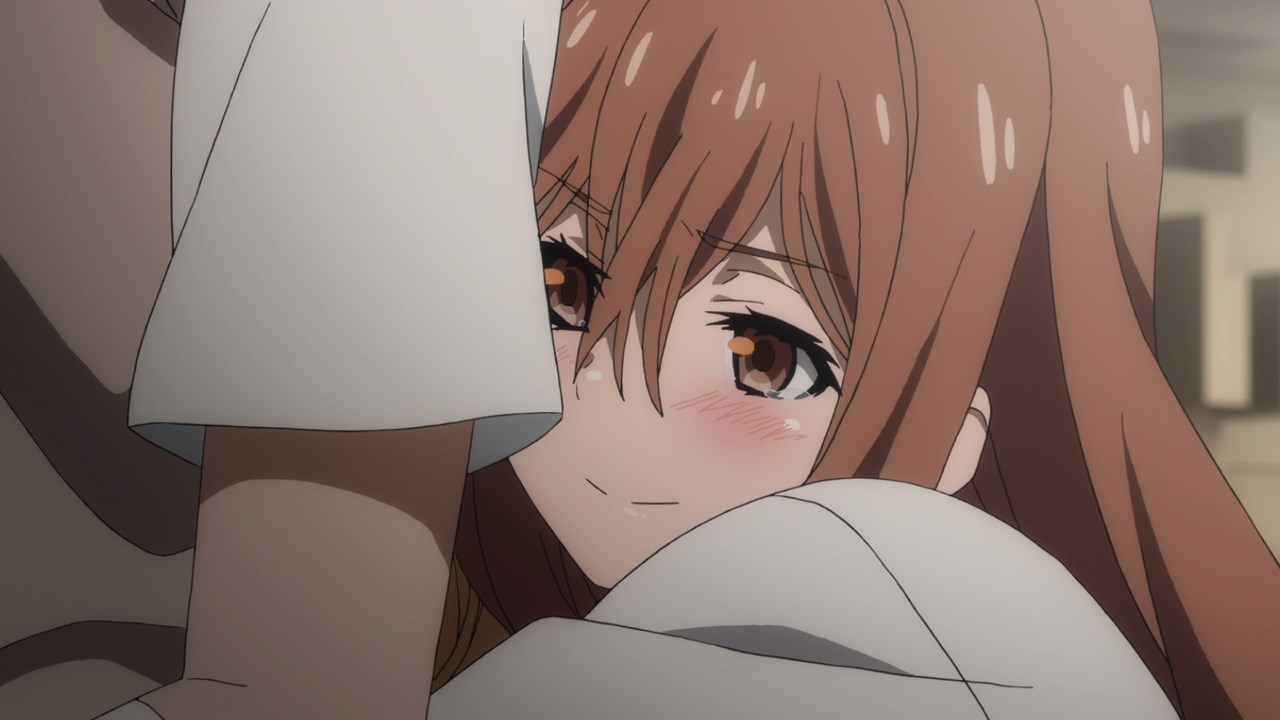 But you know what, Dolly decided to approach Misaki and hug her from the back. Aww, isn’t it cute?

Anyways, we have a nice ending for this story arc but wait a minute, I still don’t know what happened to Keitz Nokleben. Man, I feel the staff or even the author forgot about Misaki’s accomplice. 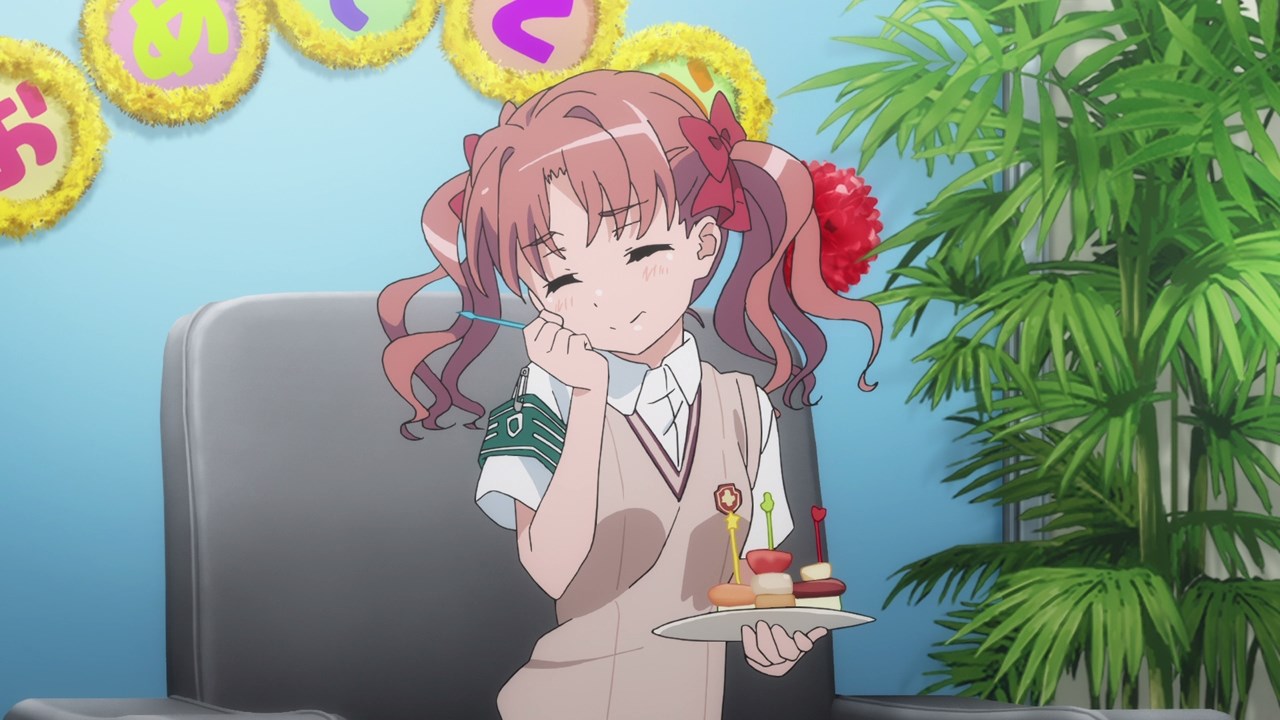 Now let’s move onto the Judgment 177 Branch Office where everyone is celebrating Kuroko Shirai’s recovery. Of course, Kuroko would like to compete at the Daihasei Festival with Misaka-neesama instead of being bound to a wheelchair all day. 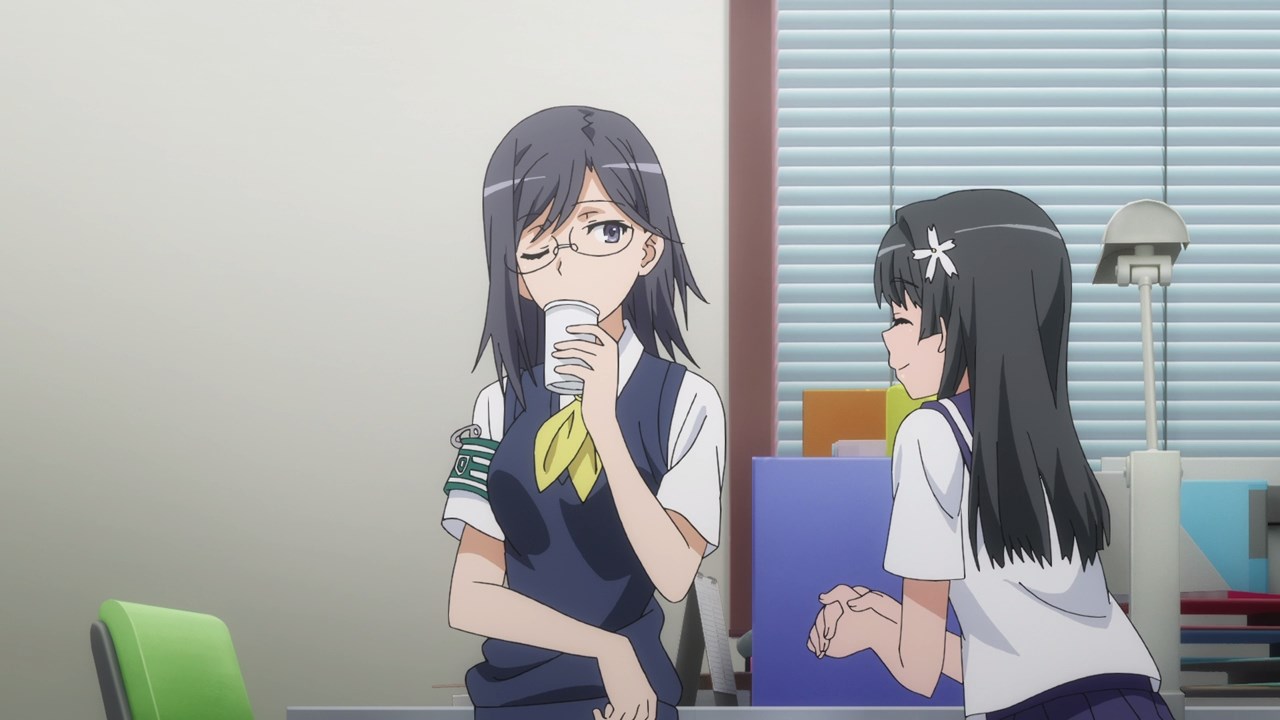 Oh yeah, here’s Mii Konori where she’s being pampered by Ruiko Saten. Speaking of Saten however, I wonder is she still gonna find the elusive Shadow Metal?

Nah, I don’t think Ruiko will dig deeper into the rabbit hole of Academy City’s bizarre rumors, especially when the dark side is involved in various illegal experiments including the Shadow Metal. 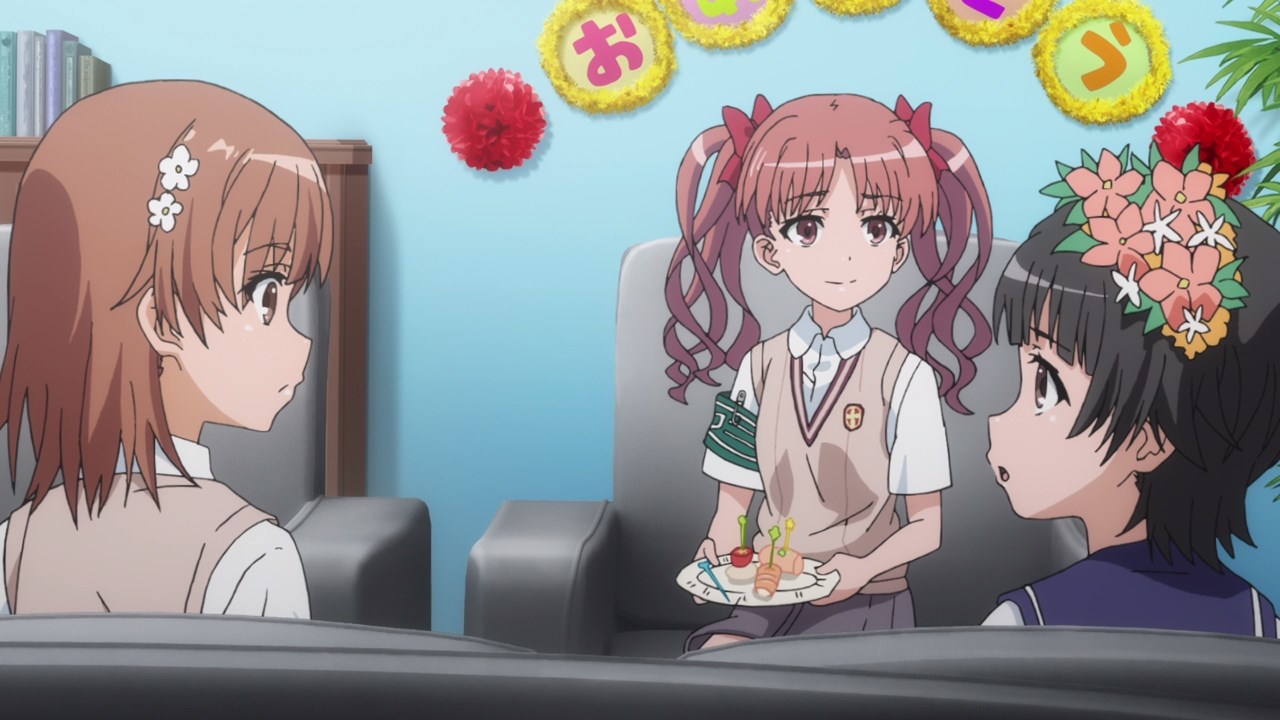 One more thing, it appears that Kazari Uiharu remembered the time Mitori Kouzaku kidnapped her and Mikoto’s mother. Of course, Mikoto Misaka and Kuroko Shirai managed to rescue them.

But you know what, I still really hate Misaki Shokuhou for messing the minds of Mikoto’s friends. Goddamn her! 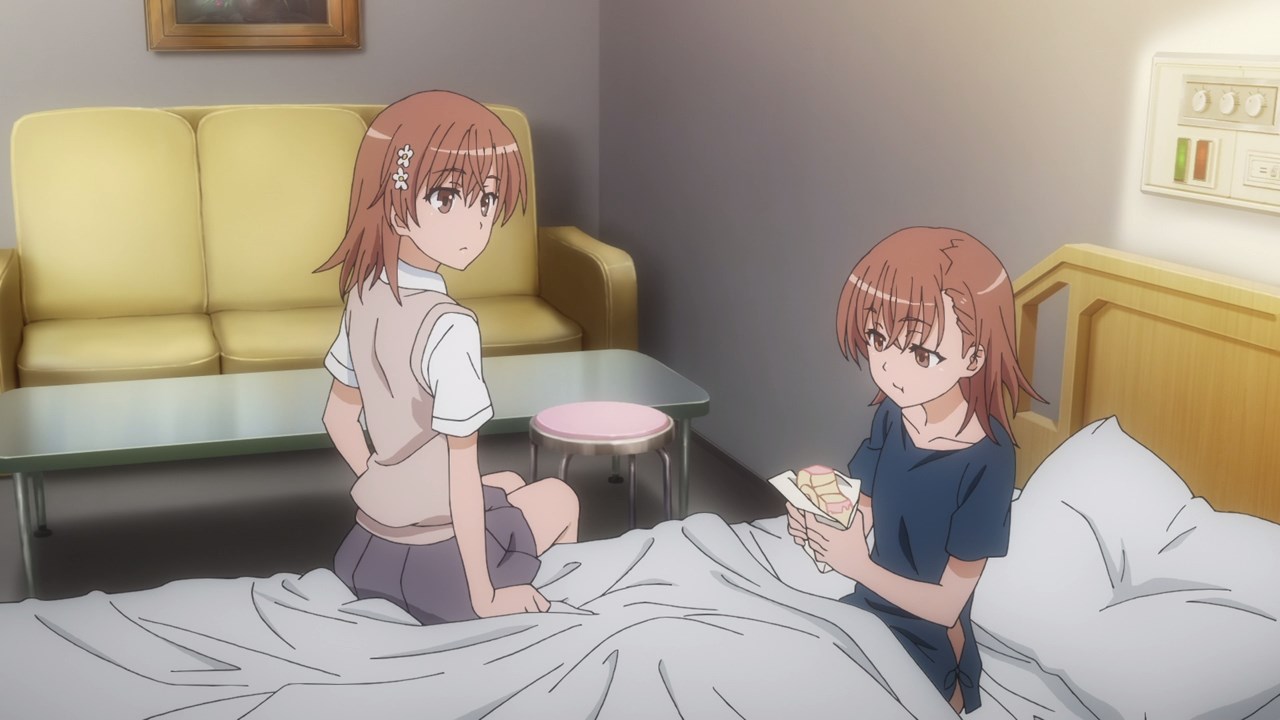 Meanwhile, it appears that MISAKA No. 10032’s health is improving thanks to the vaccine, although this Sister really wants to spend her time at the Daihasei Festival for much longer.

But for now, MISAKA No. 10032 is itching to going on the beach. Hm, she was inspired by Dolly to see the ocean? Oh wait, the MISAKA Network shares Dolly’s memories so I should have known beforehand. 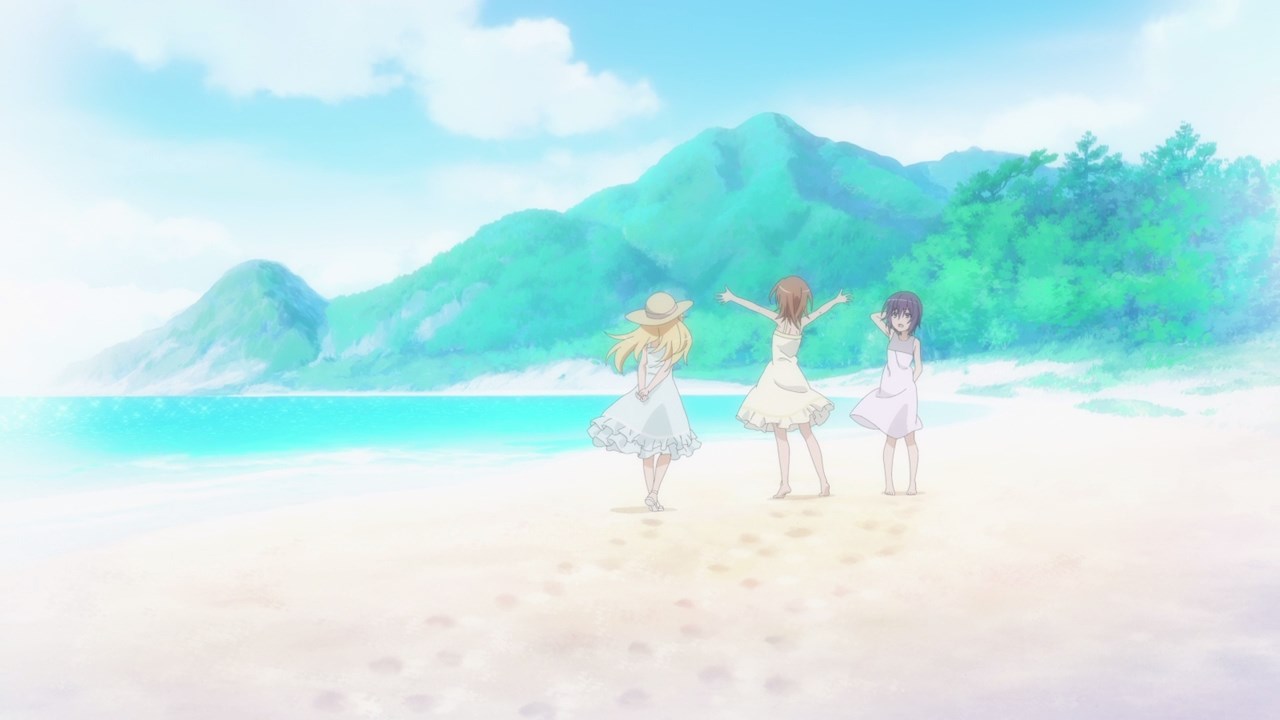 And that my friends is the true ending of the Daihasei Festival Arc. All of them lived happily ever after as they say, but let’s not forget that we still have another arc to tackle in To Aru Kagaku no Railgun T.

Unfortunately, we have to wait for 2 or more weeks for the next episode so until then, I’ll end this post right here as Misaki Shokuhou went to the beach together with Mitori Kouzaku and Dolly.