So, is anyone itching for the 3rd season of OreGairu? I’m sure that everyone wants to watch it but for the time being, we’ll have to wait for news about its premiere and I feel that it might delay to October 2020 or even next year if the pandemic got worse.

Anyways, here’s the OVA episode of OreGairu. Zoku where Hachiman Hikigaya is waiting for someone. Hm, I wonder if he has a date which is very unlikely?

With that said, here’s Iroha Isshiki where she’s gonna accompany Hikigaya for this occasion. Of course, she really wanted to hang out with Hayato Hayama, but he’s busy right now so Iroha-chan decided to be Hachiman as a sort of practice date.

Anyways, let’s move onto their date as they start things off with a game of table tennis. Sure that Iroha Isshiki is good at playing it but Hachiman Hikigaya is letting her win.

You see, Hikigaya is actually better at playing table tennis than Isshiki. Then again, Iroha is mad that she didn’t won any games once Hachiman flexed his muscles.

Afterwards, it’s time for Iroha and Hachiman to eat some desserts at a cafe with the latter paying the former. C’mon, this is a date after all!

Of course, Isshiki wants to cherish every moment from Hikigaya as she asked the waiter to take a picture of both of them. With that said, they had fun but I wish Iroha would keep this date a secret to everybody. 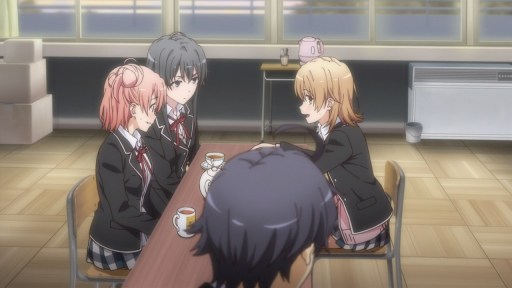 Now onto the next scene as Iroha Isshiki asked the Volunteer Club to help her on creating a news article about interesting places across Chiba City. 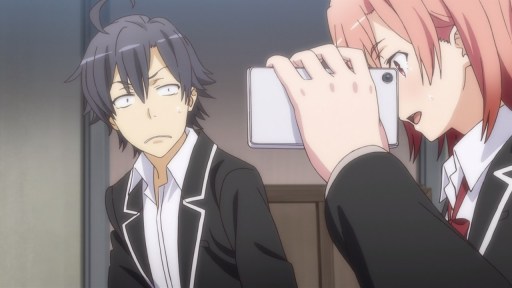 On the other hand, here’s Yukino Yukinoshita where she saw something scandalous from Iroha’s smartphone that Yukino called Hachiman out about it. 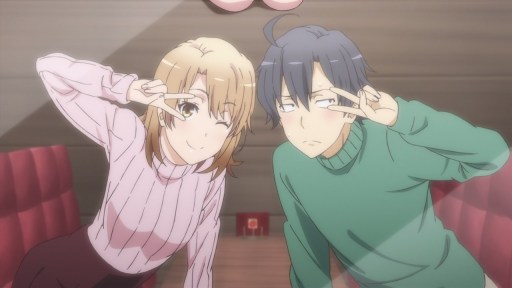 Oh, seems that Isshiki shared a photo of her date with Hikigaya, which is why Yukinoshita is very concerned that he did something bad towards Iroha-chan.

Man, I have to say that Iroha has more spice that it overpowers the sweetness and everything that’s nice from her.

Anyways, Hachiman Hikigaya went back to the city of Chiba but this time, he’s joined by both Yukino Yukinoshita and Yui Yuigahama. Then again, where’s Hachiman?

Oh, he went to the lingerie section but Hikigaya won’t go there or the girls might beat him for being a pervert.

Then again, I think Yukino Yukinoshita should go to the lingerie section to buy a bra that would increase her bust size.

Of course, this trip to Chiba feels like a date except that Hikigaya is surrounded by two beautiful girls.

Then again, he’s not interested on dating either Yukinoshita or even Yuigahama but other than that, it was a normal day in Chiba.

Well then, I’m gonna end this episode right here as Iroha Isshiki is gonna take a picture on the Volunteer Club.

Oh yeah, it appears that Hachiman is happy with the result as Iroha made a good shot of them.

Anyways, I have to say that it’s a good way to end this special episode with this lovely picture of the Volunteer Club.

Still, we’ll never know the premiere of the 3rd season for OreGairu, but I’m hopeful that things will get better for the staff at Feel once the pandemic subsides.

This entry was posted in OVAs, Movies, and Specials, Yahari Ore No Seishun Love Come Wa Machigatteiru. Zoku and tagged anime, OreGairu, ova. Bookmark the permalink.
%d bloggers like this: