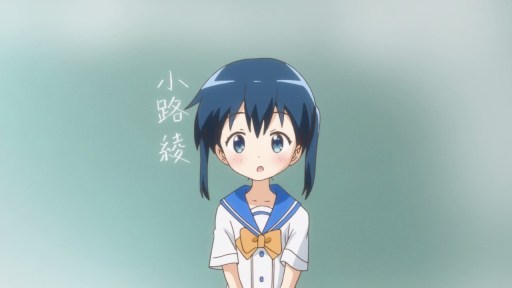 Hello everyone, it’s been a long time since I’ve watched Kiniro Mosaic and while we’re not gonna see another season, there’s an OVA released back in 2016.

This is Kiniro Mosaic: Pretty Days where we start with a flashback where Aya Komichi introducing herself towards her fellow classmates. Then again, Aya doesn’t have many friends back in middle school so she felt lonely.

That’s until she met Shinobu Omiya and Yoko Inokuma where Aya’s life has changed forever. Since then, they become friends and it still continues to this day… with addition of Karen Kujo and Alice Cartelet of course.

Now then, it’s time to move onto the present where Moegi High School are preparing for the school festival. Everyone is very busy where they make various props, costumes, and food stalls. 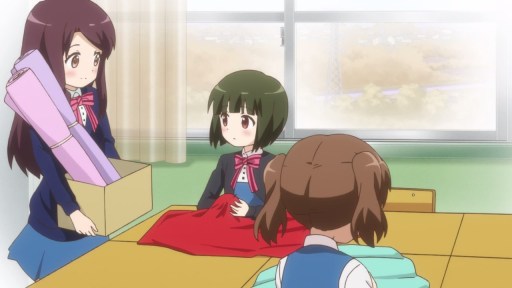 This also includes Shinobu Omiya where her class is hosting a stage play and she’s fired up on making costume and scripts to make it successful.

Heck, even Honoka Matsubara is heling Shino as she brought some fabric to transform it into costumes. 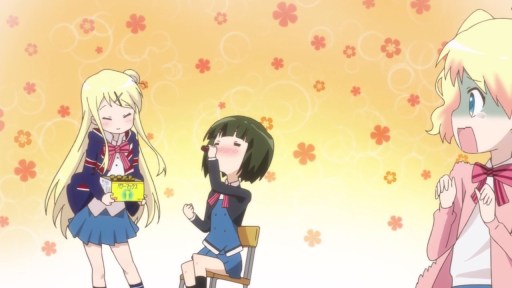 Also, here’s Karen when she brought a bottle of energy drink to wake her up, something that Alice is scared that Shinobu might get overhyped and have trouble sleeping later. 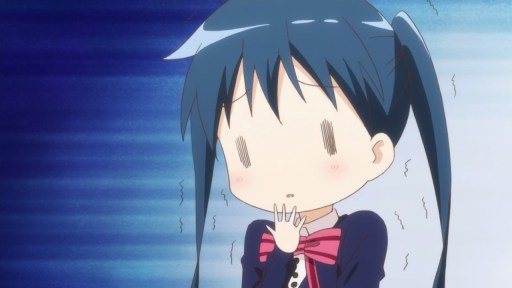 On the other hand, here’s Aya where she’s feeling lonesome, as if she was completely left out now that Shino and Yoko is spending their time with Alice and Karen.

Then again, Yoko noticed Ayaya’s loneliness that she really wants to talk to her friend. C’mon Aya, you should get close to them so you won’t get left out! 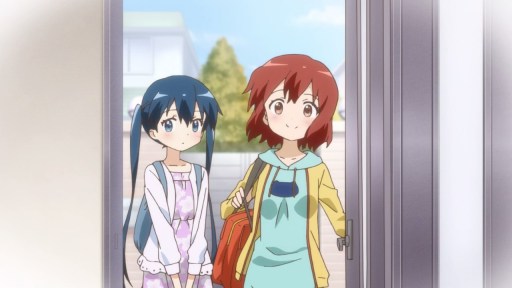 Anyways, let’s move onto the next scene where Aya and Yoko visited the Omiya residence to help Shinobu on finishing the costume. 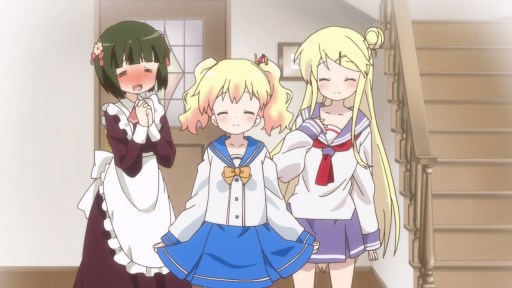 But then again, Shinobu is ogling at Alice and Karen wearing middle school uniforms. Don’t worry though, Shino will tackle the costumes later.

Well, right after doing some errands together with Isami-neechan. I’m hoping that Shino will buy something for her guests.

So for the time being, it’s time for Yoko to tell a story on how she met Shino and Aya.

Well, the easiest part would be that both Yoko and Shino are childhood friends, but they met Aya in middle school where she’s a bit shy back then.

Anyways, Yoko tells the story on how she, Aya, and Shinobu end up in high school together.

And here’s the thing though as while Yoko will barely pass the entrance exams in less-prestigious high schools, Shino is basically a lost cause as she’s not very bright that she might fail in various entrance exams across the country.

Now then, the trio visited Moegi High School as Shinobu is interested in going there because they have a cute school uniform, although Aya is planning to study at the prestigious Suiren High School. 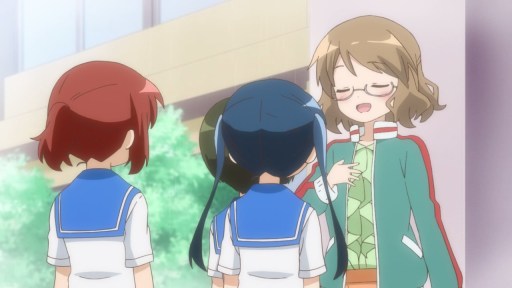 Oh yeah, they met Sakura Karasuma who’s an alumnus of Moegi High School, and a teacher where she give some words of encouragement to Shino and the rest, although Ayaya will pass the exam easily.

Still, we don’t want to discourage both Shinobu Omiya and Yoko Inokuma as I pray that they’ll gonna pass the entrance exam. The only thing they need is to study hard! 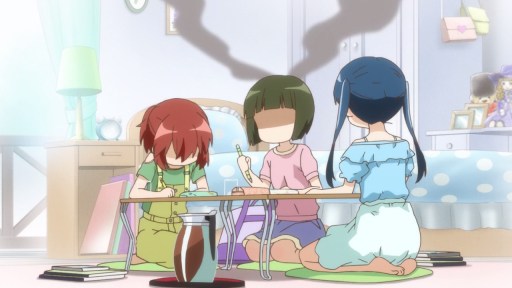 Except that Shino and Yoko are having a meltdown when it comes to tackling difficult subjects. Okay, turns out that they really suck at everything!

So, looks like it’s time for Aya Komichi to tutor them until they remember everything they studied. Then again, looks like they need to fix their brains first.

Regardless, Shinobu and Yoko are trying their hardest to pass the entrance exam as they study until the night.

Speaking of Shino, looks like Isa-nee is supporting her little sister as she brought some tea and snacks to help Shino study more.

C’mon, she needs sugar to work her brain to its limits. Well, not really… 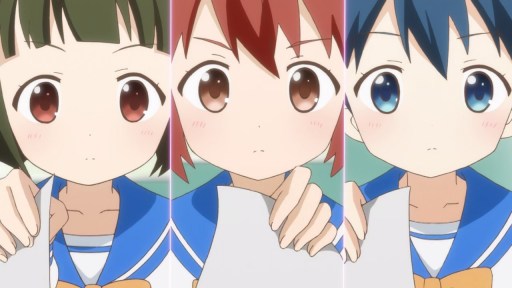 After days of studying, the day has finally arrived as Shinobu and her friends have taken the entrance exam.

Now while Aya Komichi already passed the entrance exam in Suiren High School, she wants to pass the exam in Moegi High School along with Shinobu Omiya and Yoko Inokuma. 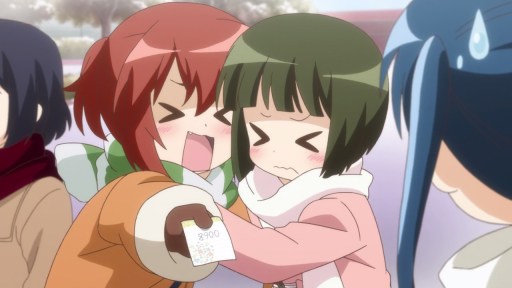 Speaking of Shinobu and Yoko, seems that they’re scared of failing the entrance exam that they want Aya to look at the board. Geez, they worry too much!

Luckily, Aya pointed them out that they pass the entrance exam, meaning that Shino and Yoko will attend Moegi High School.

For Shinobu and Yoko, they’re happy that they passed the exam thanks to Aya. I mean, she’s the smartest that Ayaya tutored them.

And that concludes this wonderful backstory where they lived happily ever after.

Well, Ayaya decided to enroll to Moegi High School as she doesn’t want to be lonely without Shino and Yoko, so it’s all good!

Heck, even Karen Kujo and Alice Cartelet are impressed that it was all thanks to Aya Komichi where she help her two best friends to pass the entrance exam.

Then again, Aya felt embarrassed that she’s being praised too much!

Meanwhile, Isami and Shinobu have returned from their errands and you know what you’re thinking, this means that they brought some goodies to share. 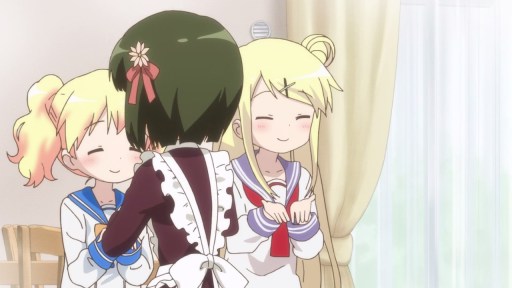 …like an imaginary heart where Shino gave it something that’s intangible, yet precious at the same time.

Unfortunately, what Karen and Alice want is something to eat like pastries or even snacks. While they appreciate Shino’s gift, they really want something physical. 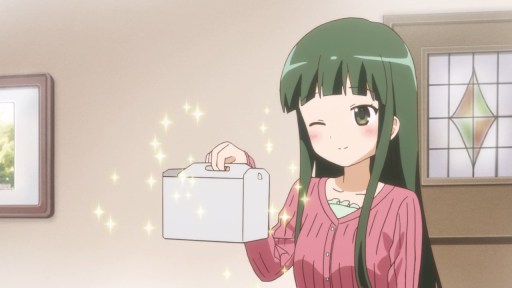 Luckily, Isa-nee brought some cakes to eat in which Alice and Karen are happy to get something that’s even sweeter. 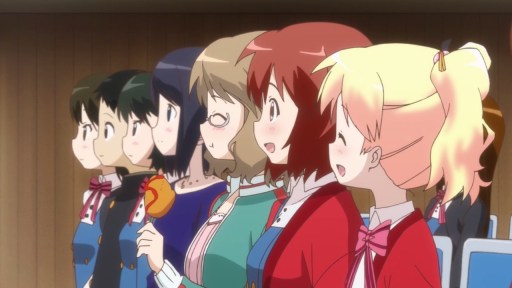 Now then, the day of the school festival has finally arrived as Karasuma-sensei, Yoko, and Alice are here to watch the stage play in which Shinobu made the script and the costumes by herself.

As the curtain rises, it’s time to see the main heroine of this special stage play…

…who turned out to be Aya Komichi. Wait, is Karen Kujo supposed to take the main heroine role? 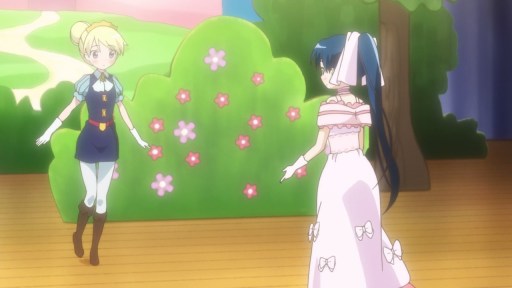 Speaking of Karen, she’s here playing as the prince, although Karen is not gonna stick her role for long.

In fact, Karen throws a smoke bomb in which she transformed into a ninja. Wait, that’s not in the script!

Well everyone, it appears that the stage play might become a failure as Karen throw the script out of the window. Man, somebody need to improvise the plot of this stage play!

Luckily, Shinobu Omiya has decided to go Super Sai- I mean, Golden Hair Mode to improvise the plot in a jiffy.

And seriously, Shino is fired up as she’ll do anything to make this stage play a success. Well, it’s all thanks to her golden hair!

Anyways, Shino has managed to finished the new plot where she invited everyone, including Sakura Karasuma in which she has experience in acting.

Well, that’s not true about Karasuma’s drama experience, but she’s eager to play as a totem pole fairy!

On the other hand, here’s Akari Kuzehashi where she’s shocked that Sakura is participating in a stage play. Um Kuzehashi-sensei, you’re welcome to join too y’know!

Now then, here’s Yoko Inokuma where she wants to dance with Aya Komichi. Man, it would be nice if she was playing as the prince, but Yoko is in another class together with Alice. 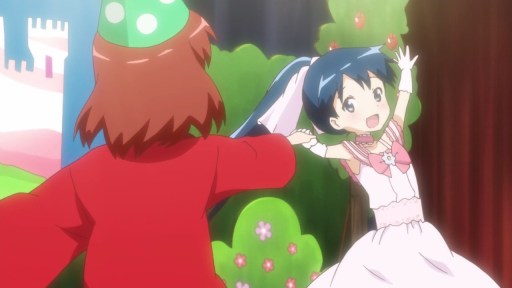 Still, Ayaya gladly takes Yoko’s hand as they danced until the play ends. Aww, isn’t it great but does this stage play made a good impression towards the audience?

Well, everyone loved it despite Shino changed some things to make it successful. Heck, even Yoko’s siblings, Mitsuki and Youta, loved how it played out!

And so, the stage play is finally finished as everyone gather up for a curtain call. Of course, we’re gonna end this OVA right here as the audience gave Shino and the rest a round of applause.

Now then, I have to say that I found a new perspective on Aya Komichi upon watching Kiniro Mosaic: Pretty Days. Sure that she’s not a foreigner nor a childhood friend to Shinobu and Yoko, but Aya is the one who brought everyone together. On the other hand, it’s nice that Shinobu Omiya is showing some passion throughout the OVA from passing the entrance exam to making a stage play, although her obsession with blonde hair remains the same.

In any case, I feel that this OVA is amazing to watch but it appears that Kiniro Mosaic won’t have another season… except that Houbunsha announced that a movie is in the works, which will be shown in the future. So yeah, there’s still more for Kiniro Mosaic and I’m looking forward for it!

This entry was posted in OVAs, Movies, and Specials and tagged anime, KinMosa, ova. Bookmark the permalink.
%d bloggers like this: