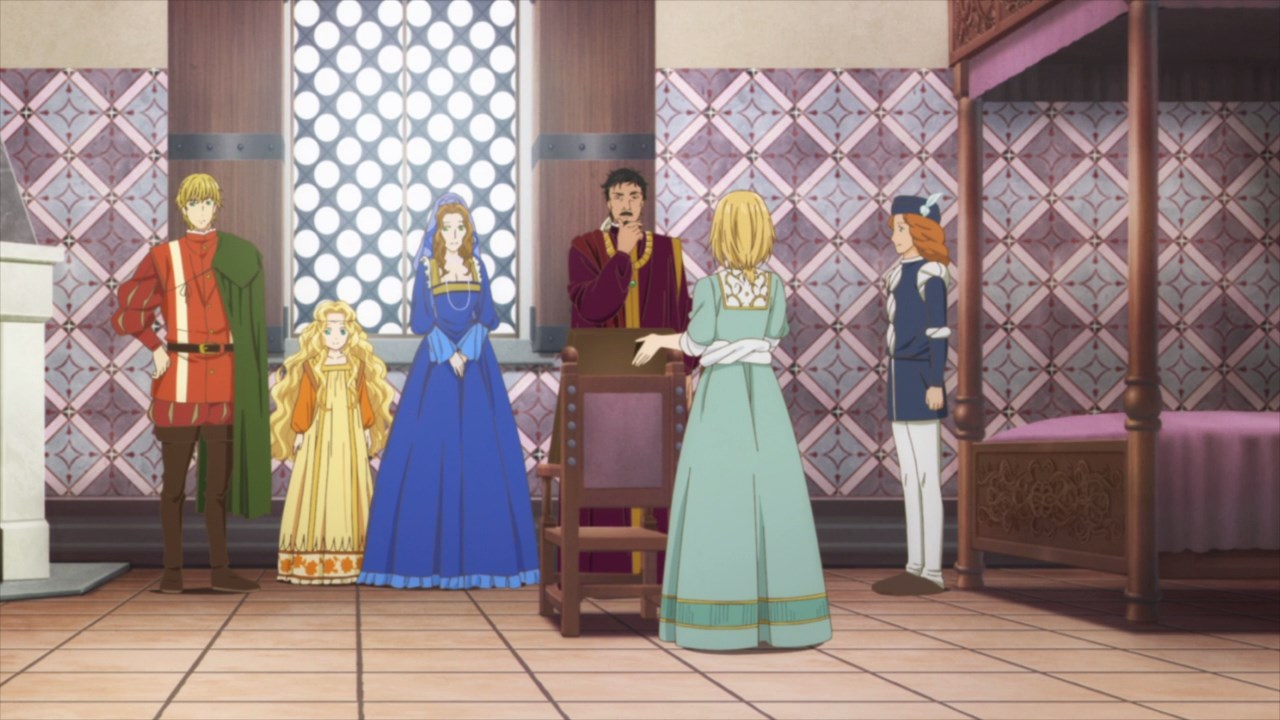 Well everyone, this is the last episode of Arte as our heroine has finally finished the portrait of Lady Sofia. Heck, even Lord Malta is impressed by Arte’s skills to make the best painting that’s worthy of the Falier family.

Sadly, this is the last day in Venice for Arte but she hasn’t decided on whether to stay or move back to Florence. Speaking of Florence, I wonder what happened to Leo lately? 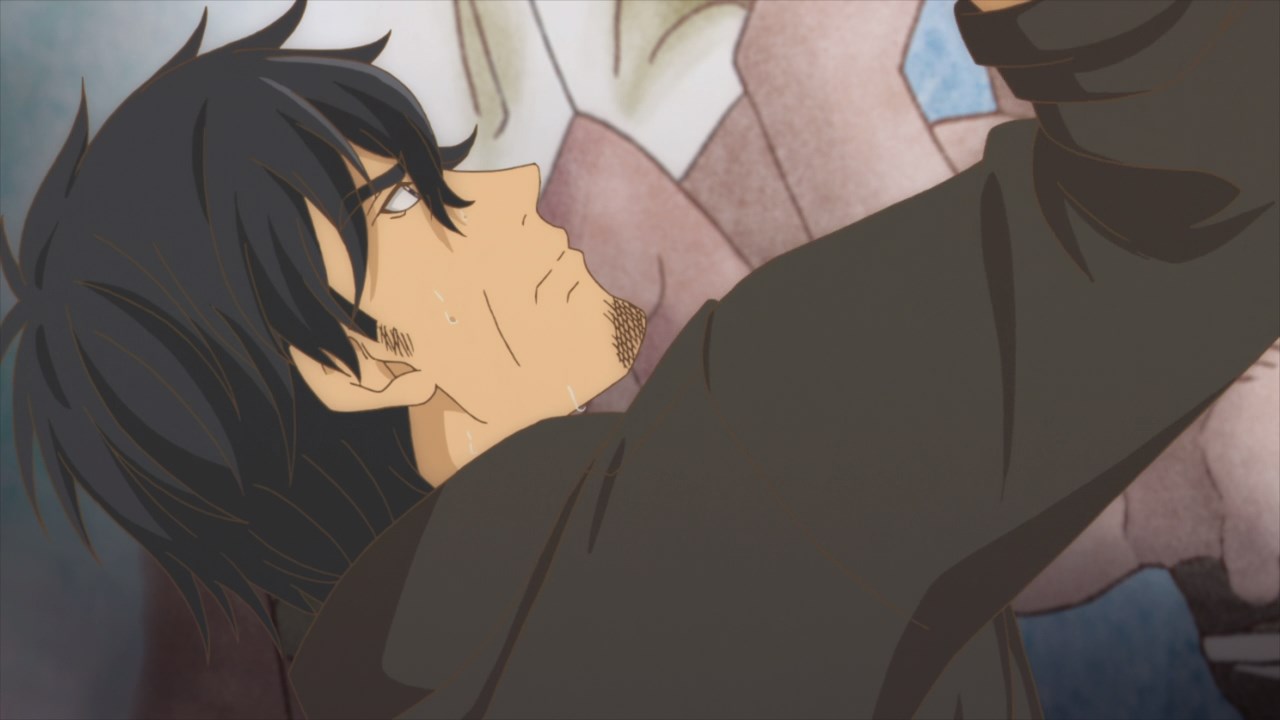 Oh, he’s still working at the ceiling mural. Then again, Ubertino is worried that Leo might not finish the mural in time for Easter as he’s painting it without any assistants, not even from various workshops across the city. 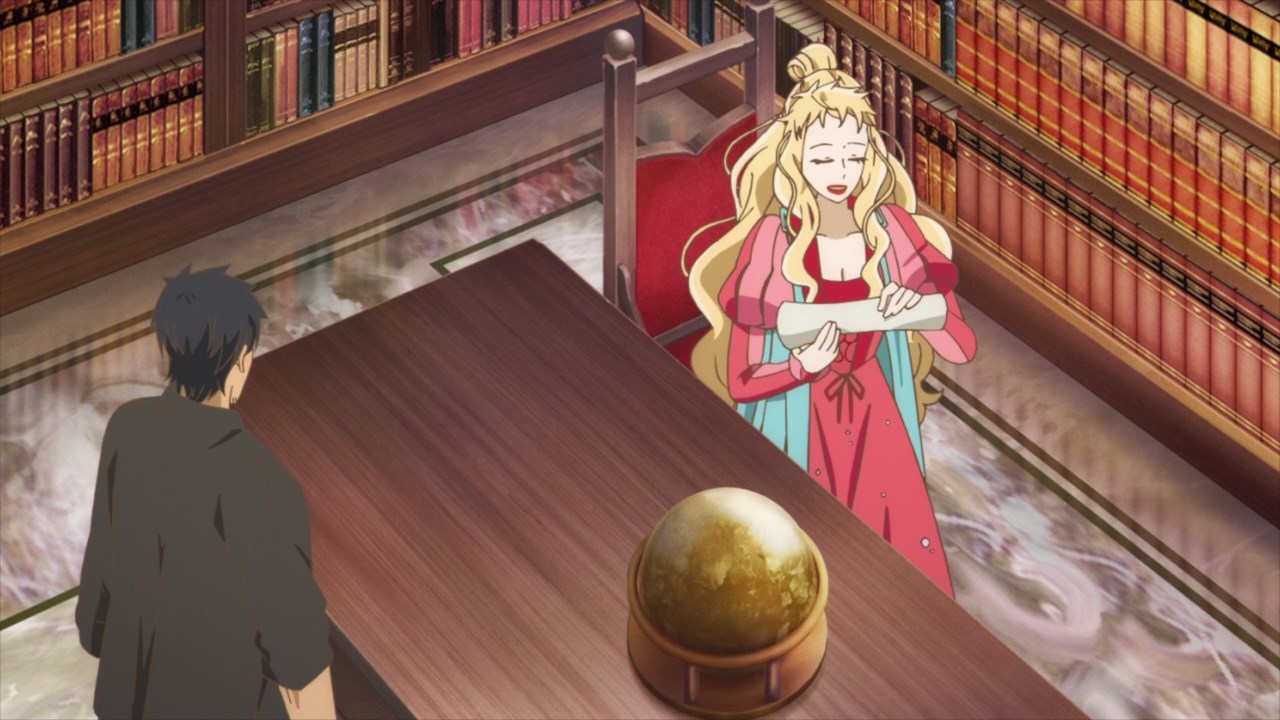 Still, the likes of Veronica and even Angelo Parker are worried about Arte as they really want her to return to Florence. Of course, that depends on her decision. 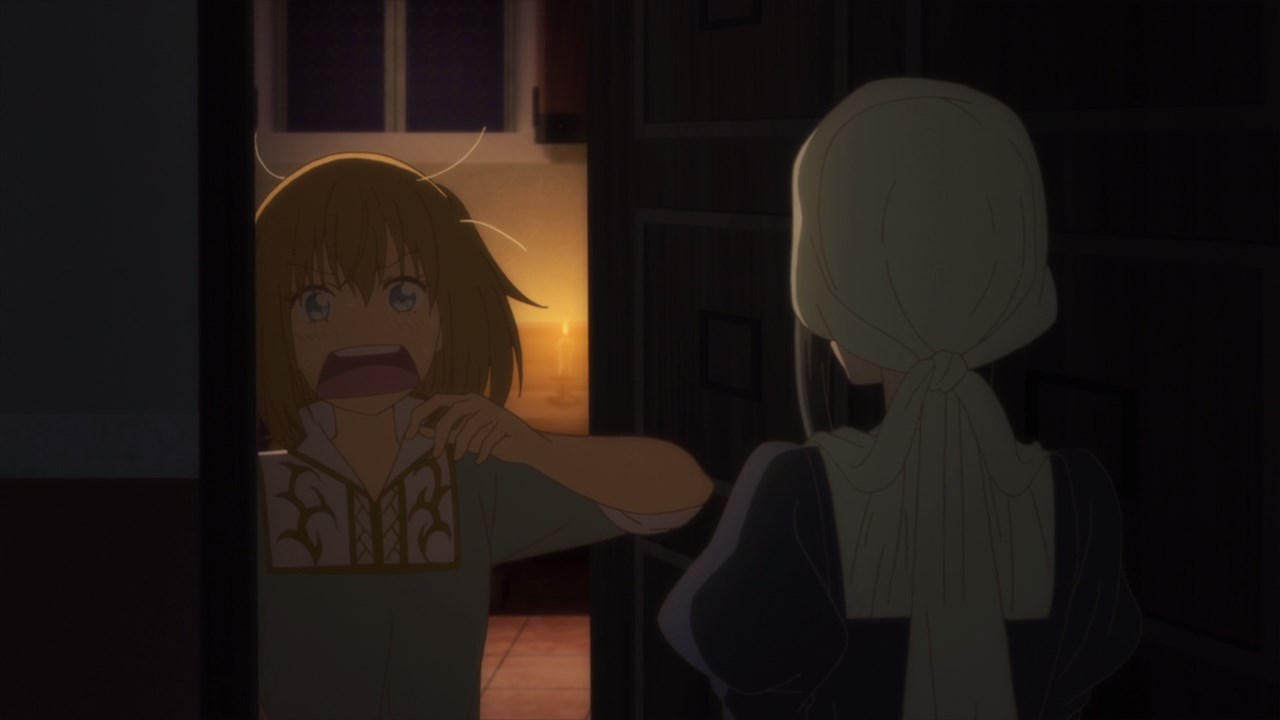 Now let’s return to Venice where Daphne called Arte as she has a guest in the middle of the night. Hm, it’s weird to have a visitor when everyone are currently sleeping. 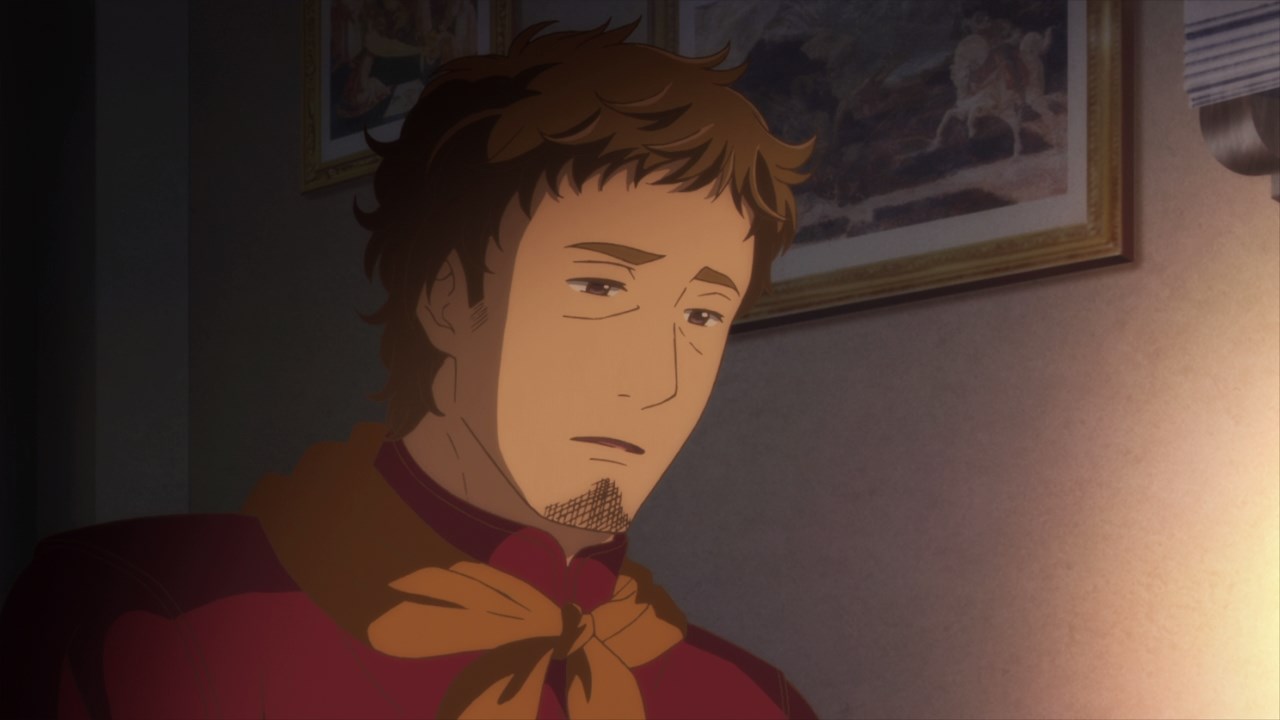 Oh, it’s Matei as he’s here to apologize for what he said to Arte in the previous episode. Then again, it’s not like Matei said something ill to her. 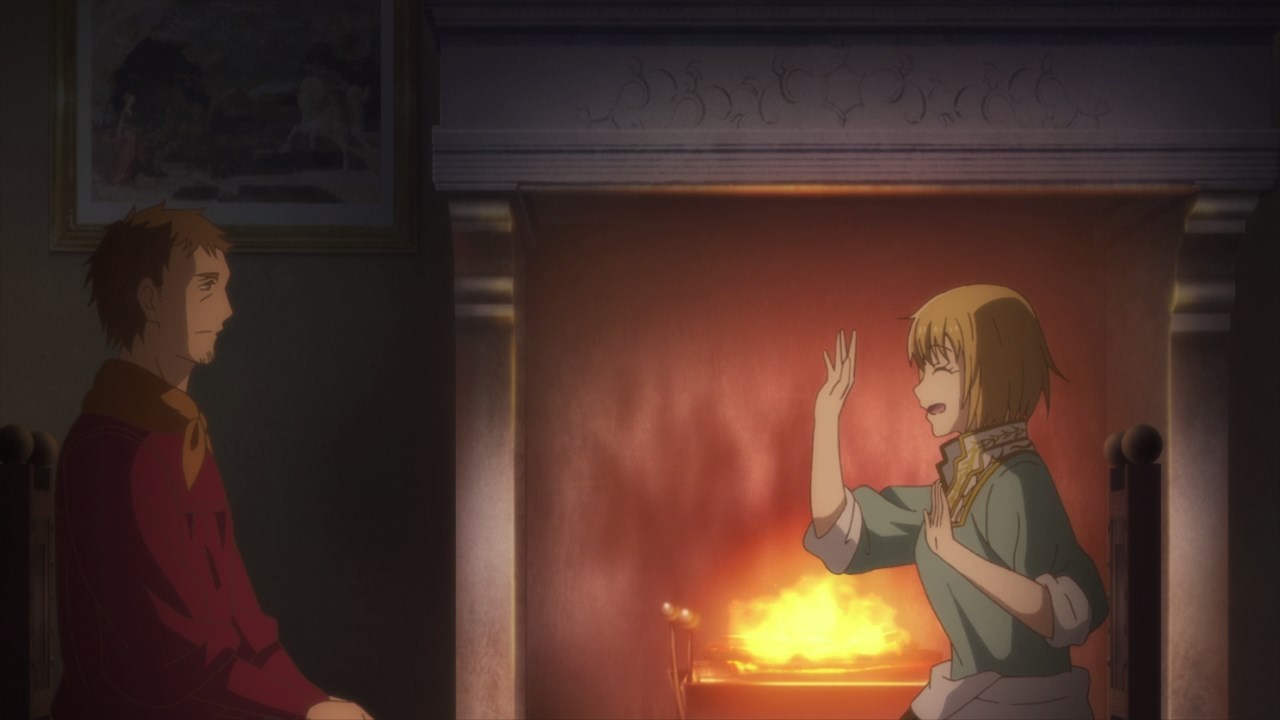 I mean, Arte said that it doesn’t bother at all. Oh yeah, she wants to apologize to Matei for what Catalina said to him.

Still, there are no hard feelings between the two as Matei and Arte respected each other. 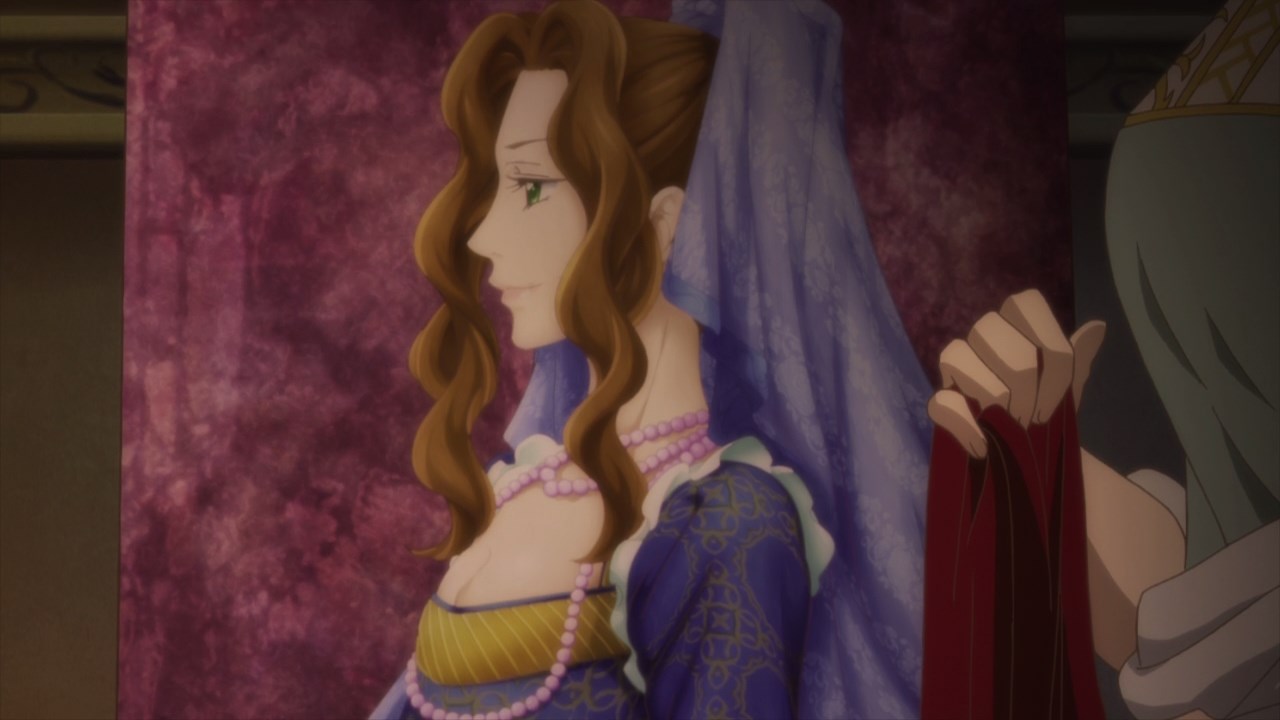 One more thing, looks like Arte showed her portrait painting of Lady Sofia to Matei.

I have to say that it was stunning to look at where Arte did everything, including the necklace that Sofia is wearing during the painting session. 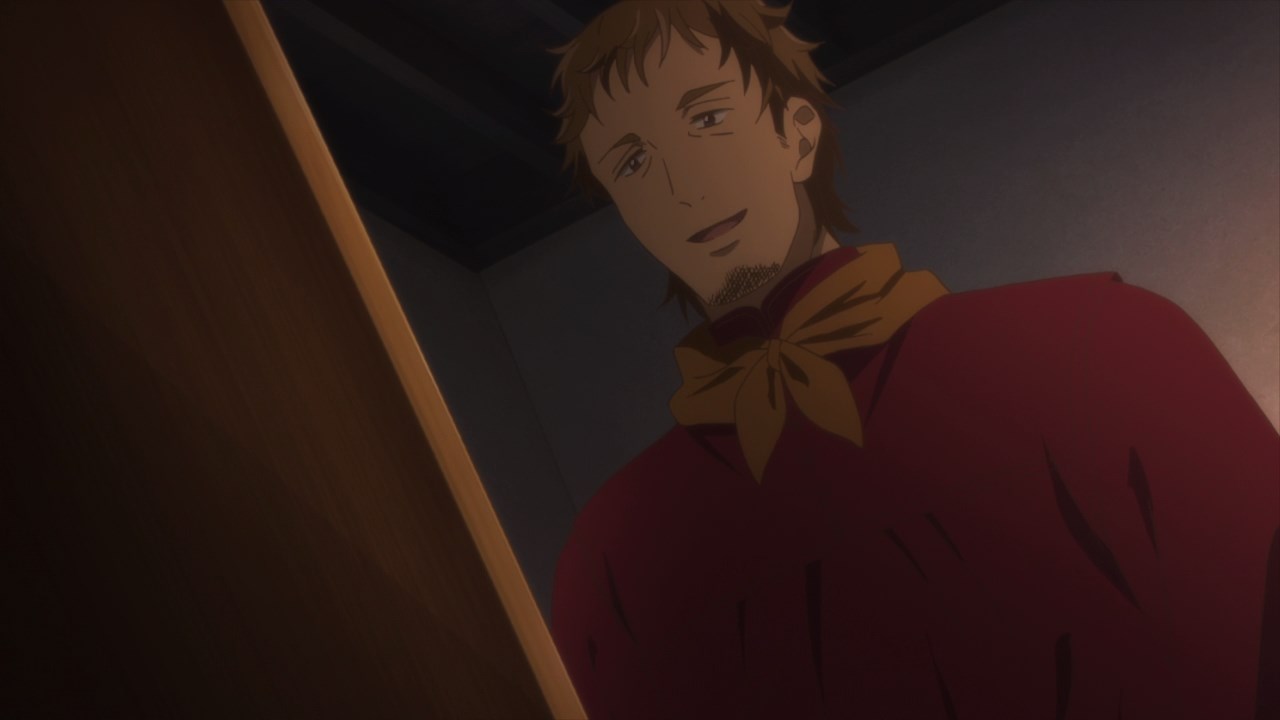 In any case, Matei is very impressed that he told Arte to treasure her talent. Of course, we still don’t know on whether Arte will stay in Venice or return to Florence. 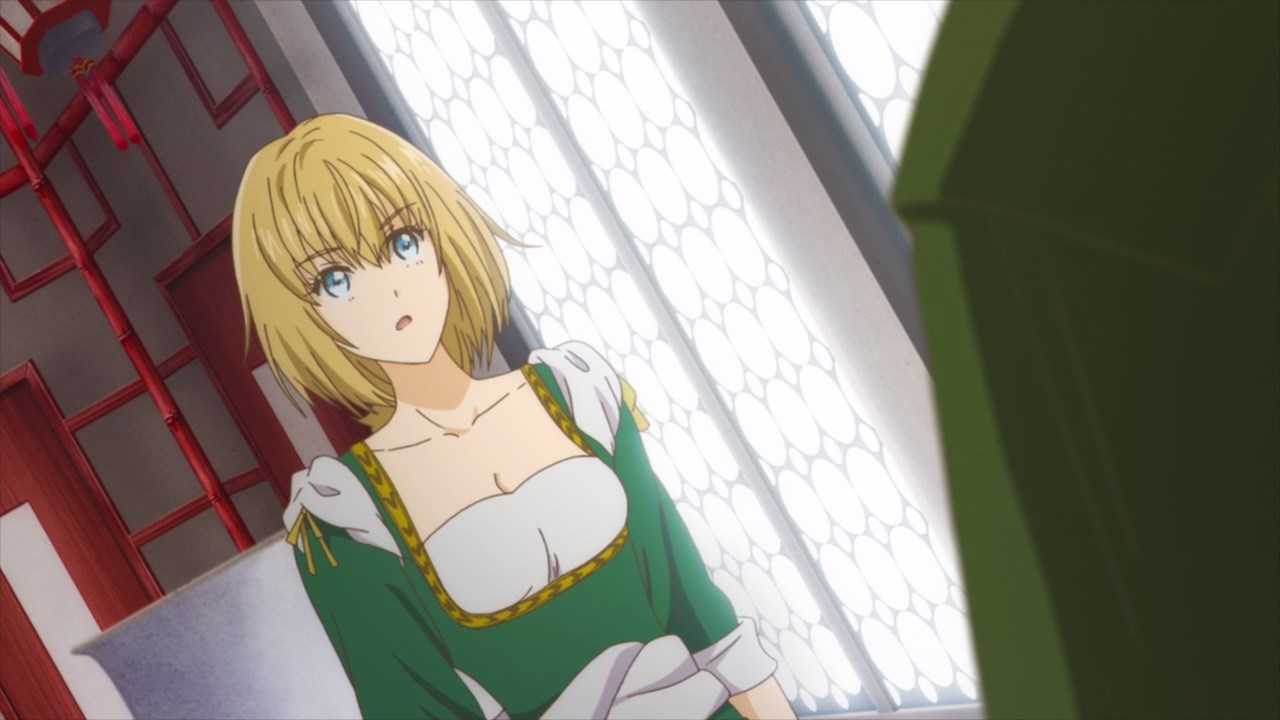 However, it appears that Arte already made the decision to return to Florence as while she’s amazed upon living in Venice, she wants to become a better artisan with her own power rather than using her position as a noblewoman. 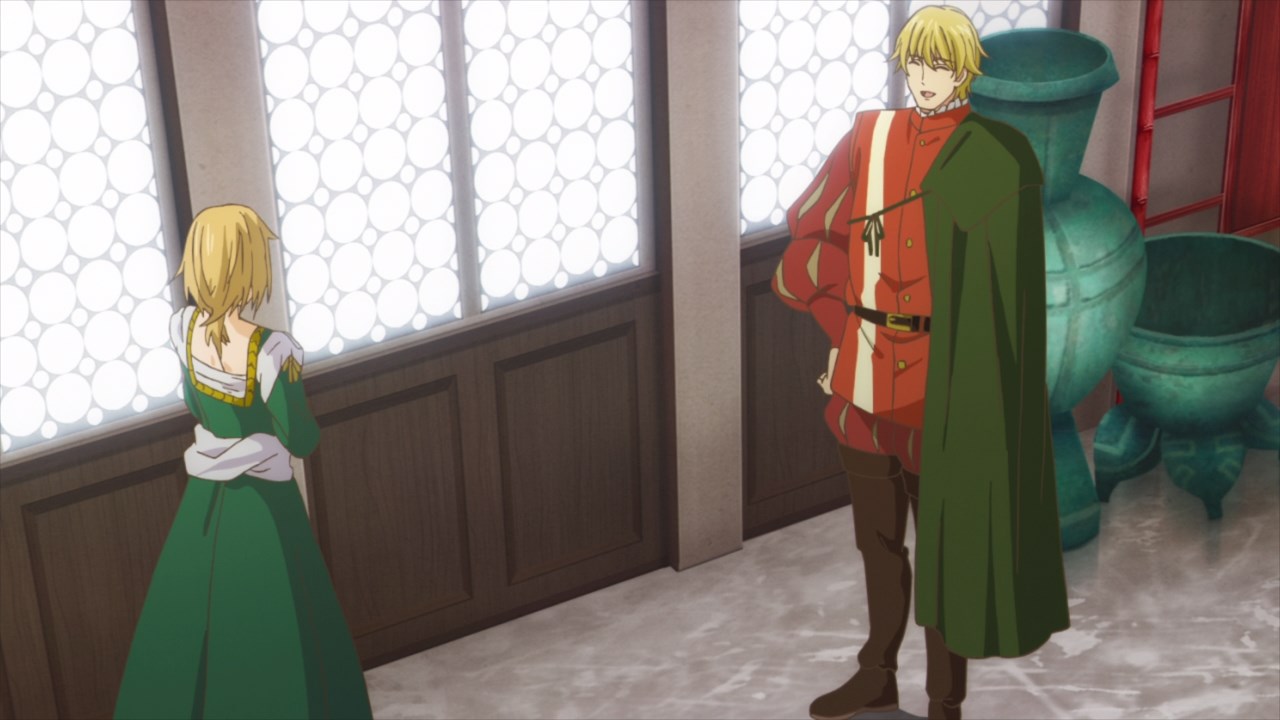 For Yuri Falier, it seems that he’ll respect Arte’s decision as it’s for the best to let her become an artisan on her own terms. I hope that there are no hard feelings for Yuri. 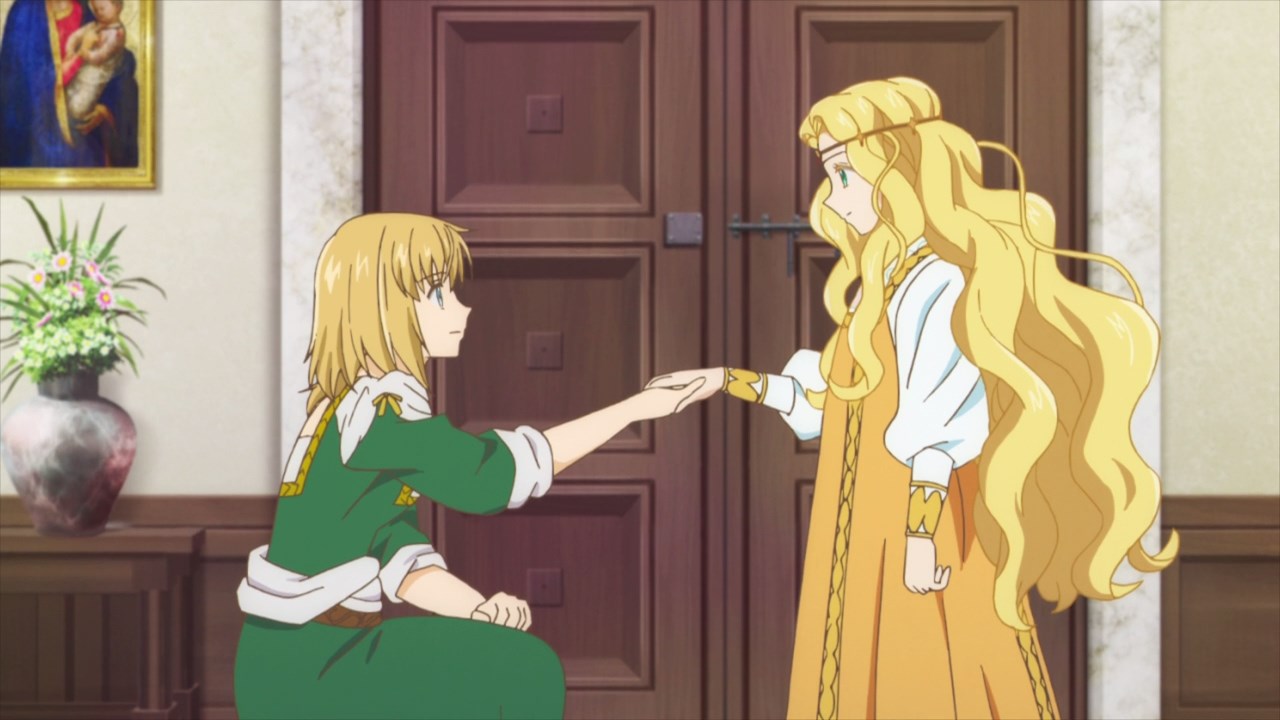 Oh yeah, and while Catalina will be sad that she’ll miss her tutor, Arte will keep her in touch by sending her letters. I feel that it’s gonna be a start of a beautiful friendship for both girls. 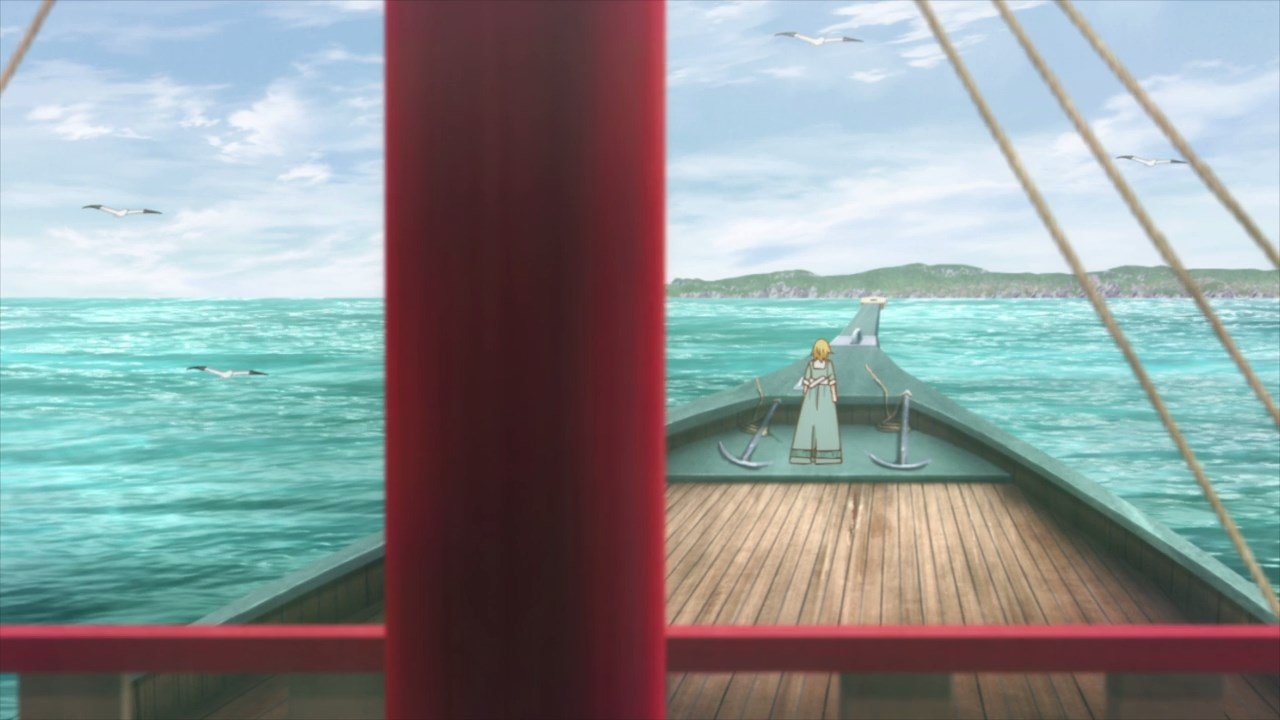 Anyways, time for Arte to leave Venice as she really missed her master so much. Of course, it’ll take days to return to Florence. 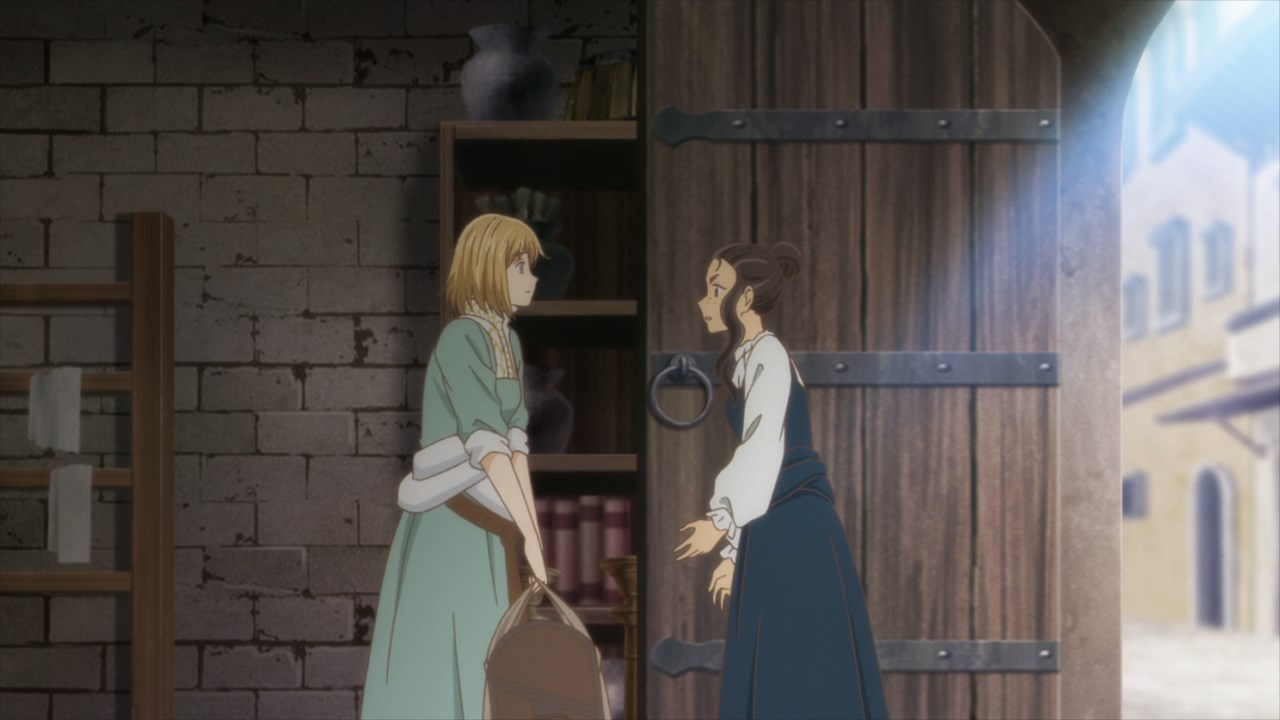 But when she arrived to Florence, Arte got some bad news as Darcia told her that Leo got a fever and he’s currently staying at Ubertino’s mansion. Oh I hope that Arte’s master is okay. 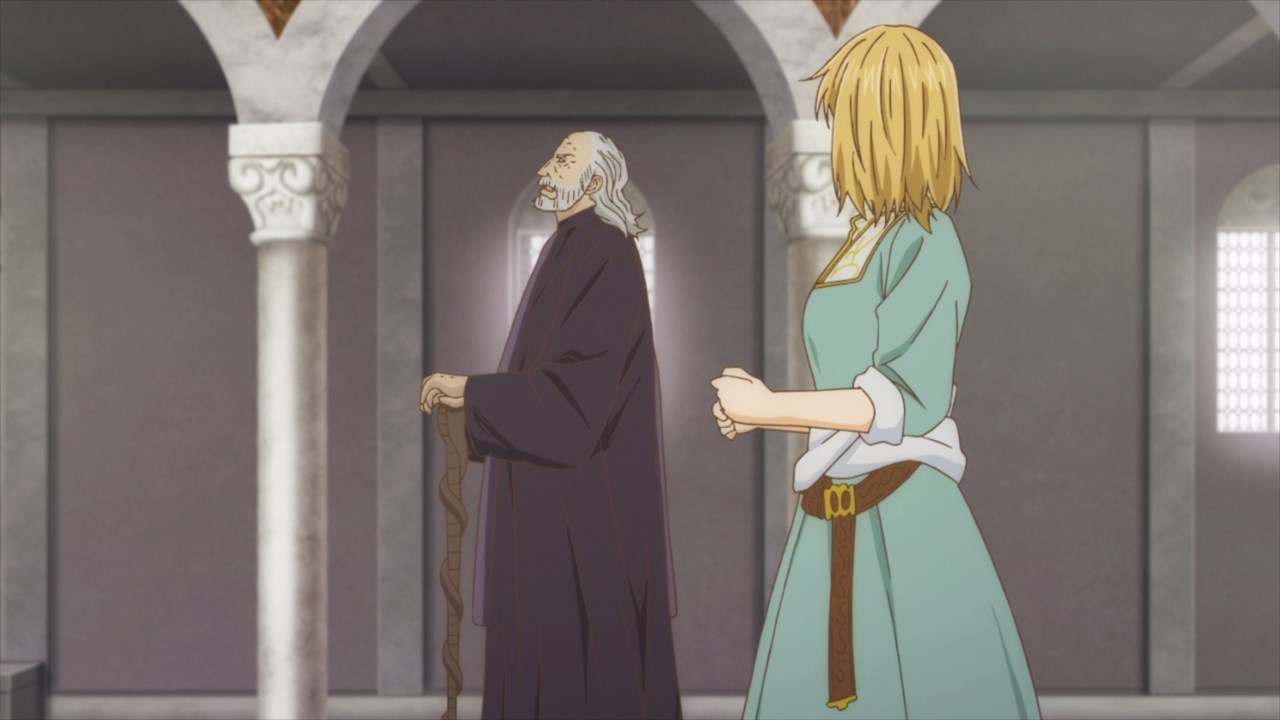 Well, Ubertino told Arte that Leo isn’t dead as he’s currently resting, but Ubertino is worried that the ceiling mural won’t be finished in time. 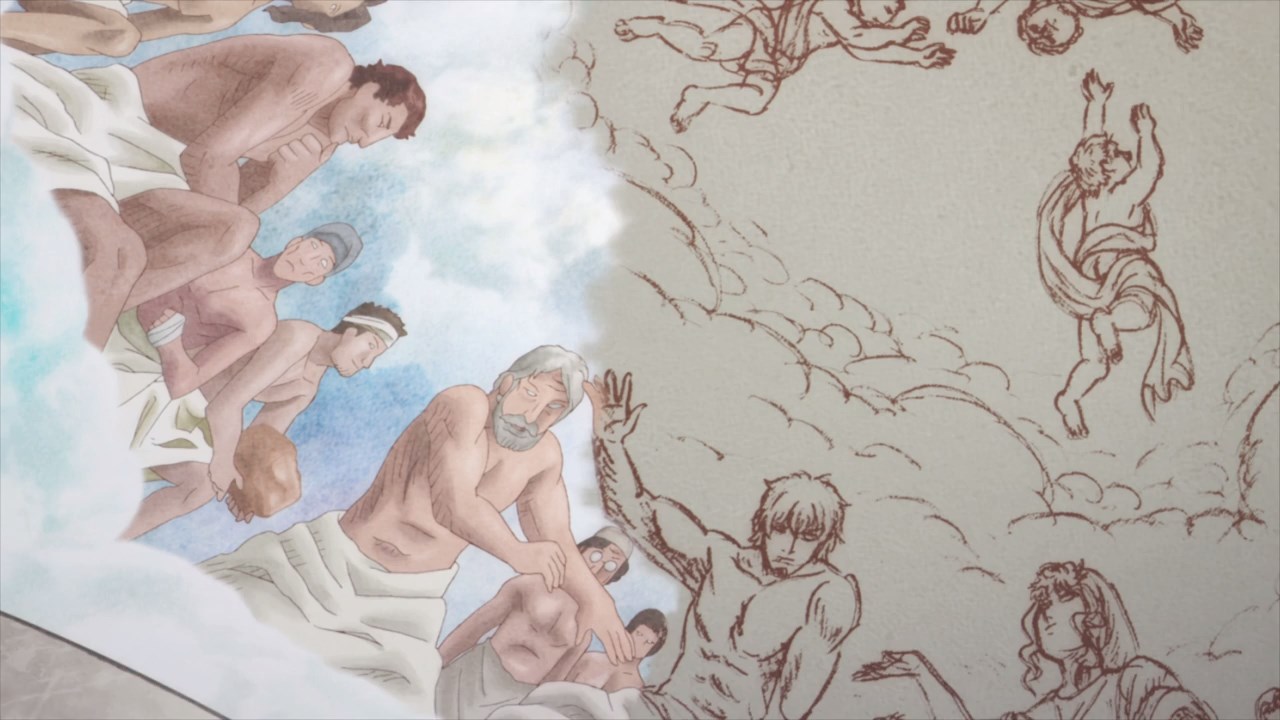 As you can see, Leo already finished the sketch and he’s about to completely paint the ceiling, only for him to get sick in which the mural is not yet finished. 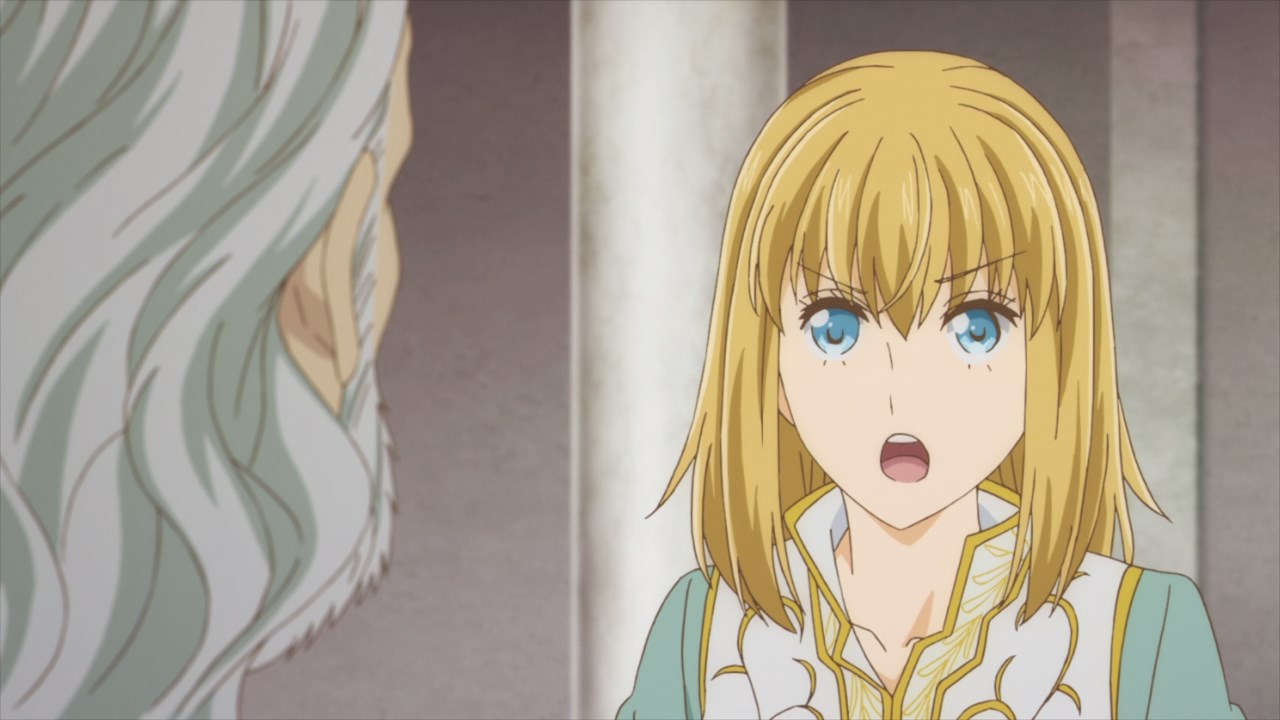 Fortunately, Arte has decided to finish the mural in Leo’s absence but then again, I don’t think her master would approve that as Leo doesn’t want someone ruining his vision for it. 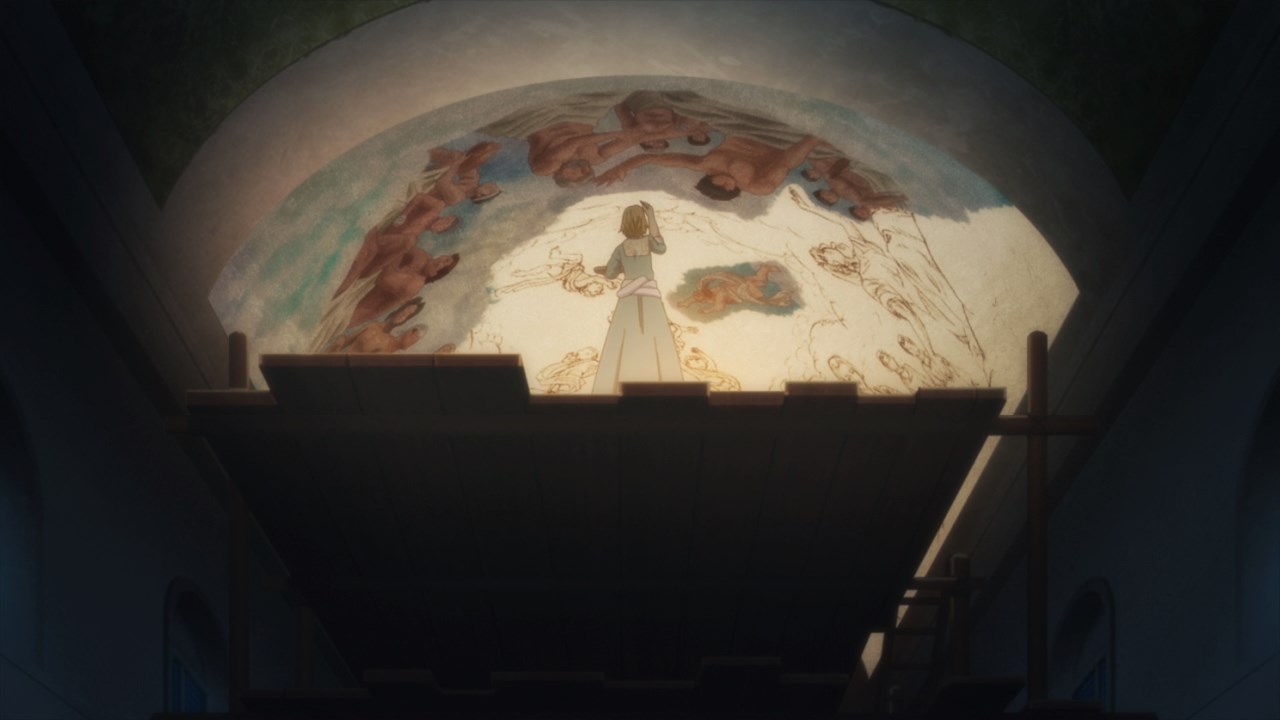 Regardless, Arte took the job and work on the mural right away. Even at night, she still paints the mural although Arte needs some helping hands. 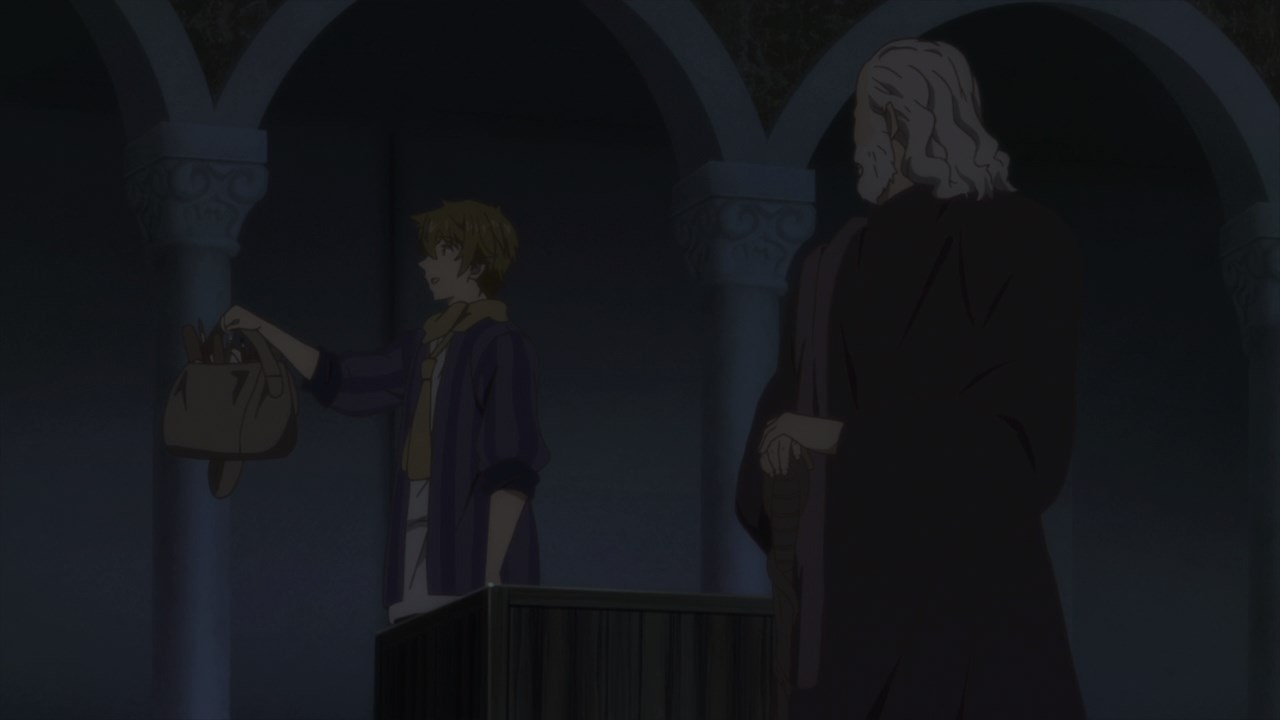 Well, Angelo stepped in to help Arte. While it’s great that Master Danilo sends one of his apprentices to help Arte, I don’t think many of them will come to her aid. 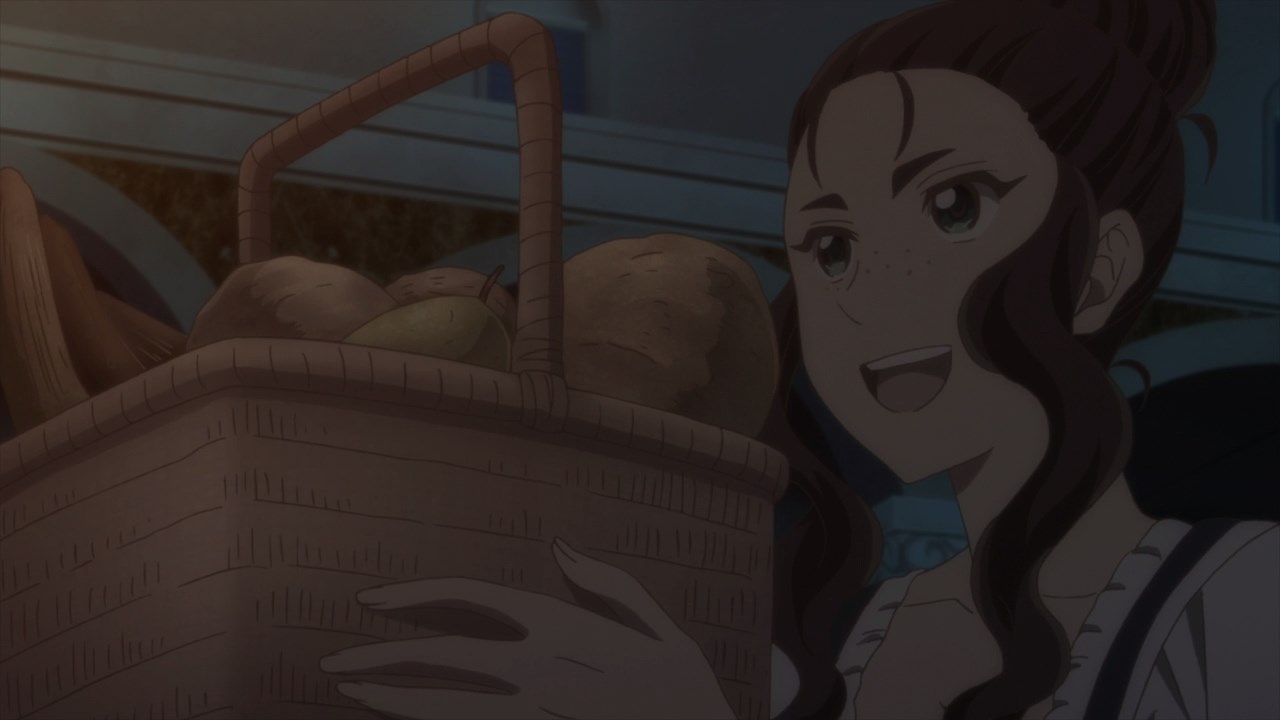 Also, here’s Darcia where she brought some loaves of bread. C’mon, I’m worried about Arte’s health as it’s not good to skip meals. 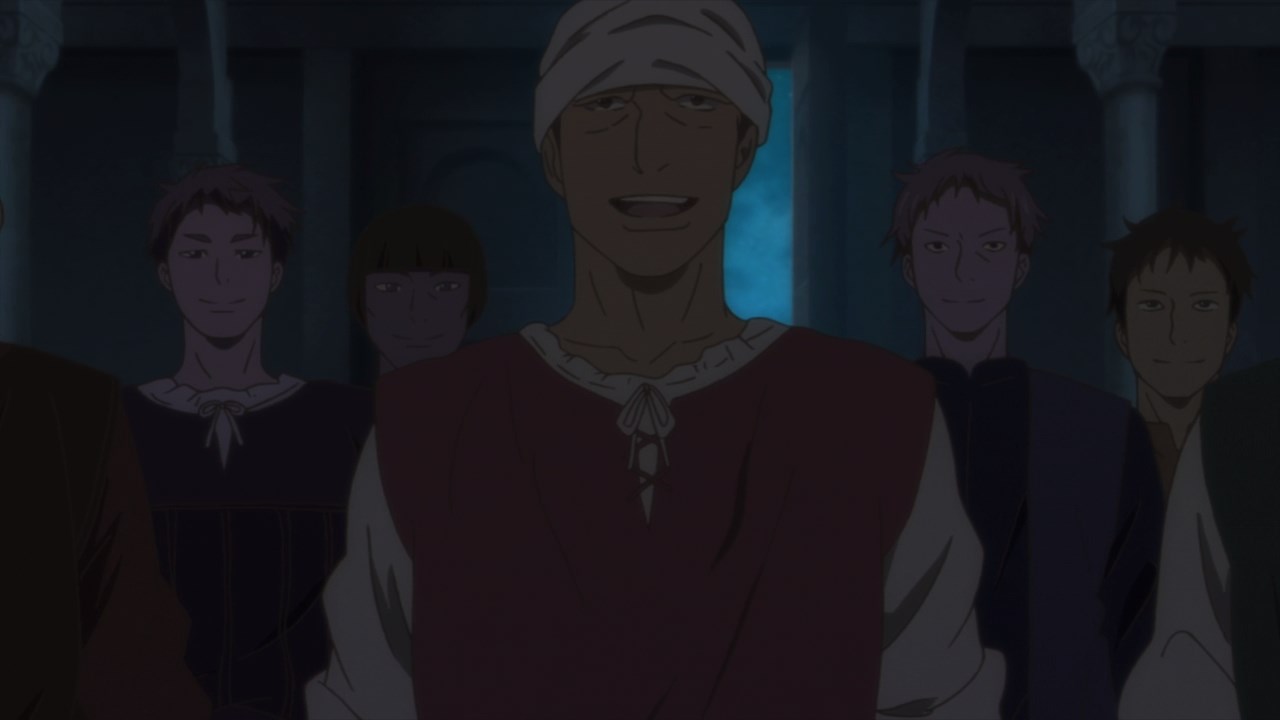 Finally, it looks like various artisans have decided to help Arte on finishing the ceiling mural, which is very nice to hear that.

Gotta say that after years of being mocked by various men because of her gender and status, looks like everyone is convinced that Arte proved herself to be an artisan in her own right. 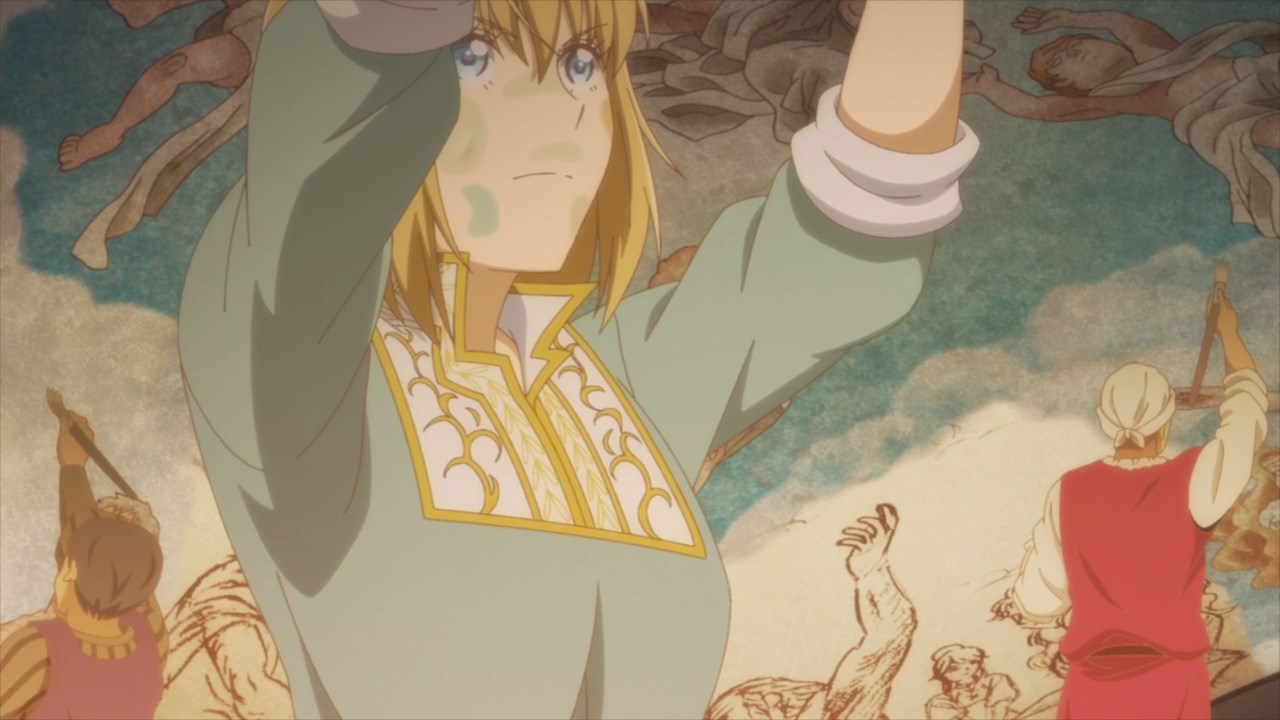 With that said, Arte and her fellow artisan are finishing the ceiling mural until Easter has arrived. And really, they’re working hard to finish what Leo started. 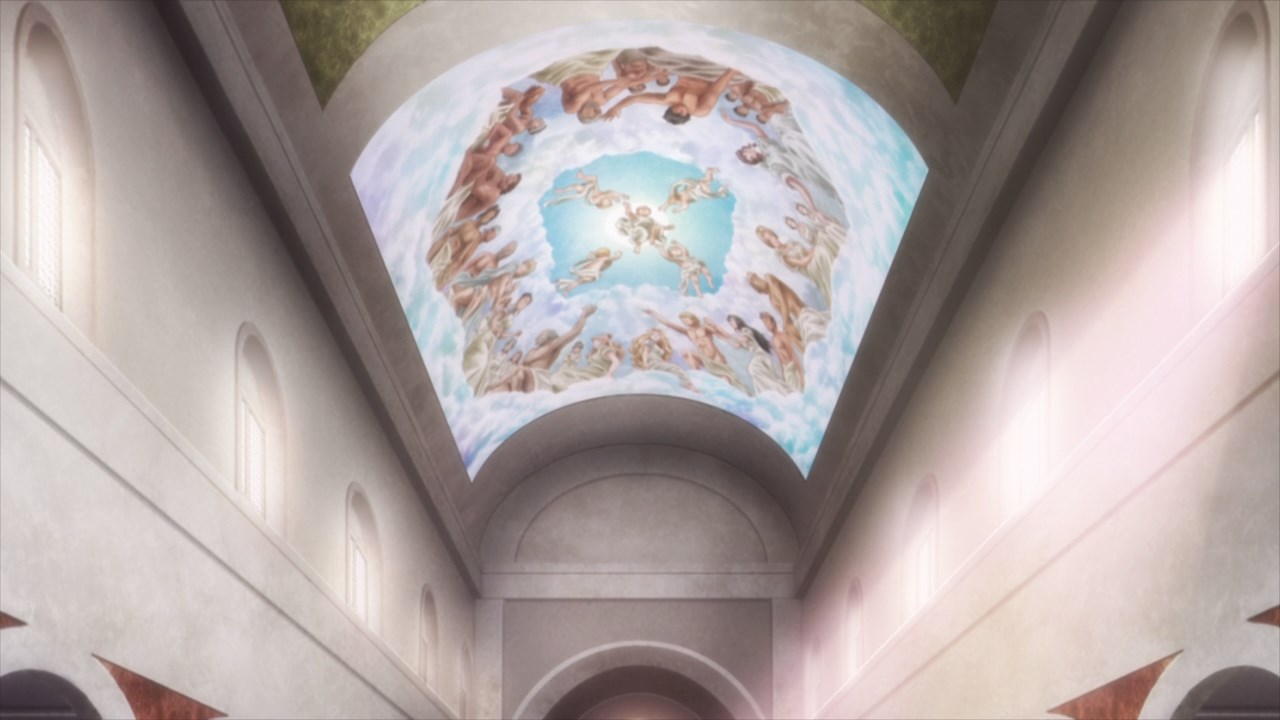 Anyways, looks like the mural is done but how will Leo react to it as he just recovered from his fever? 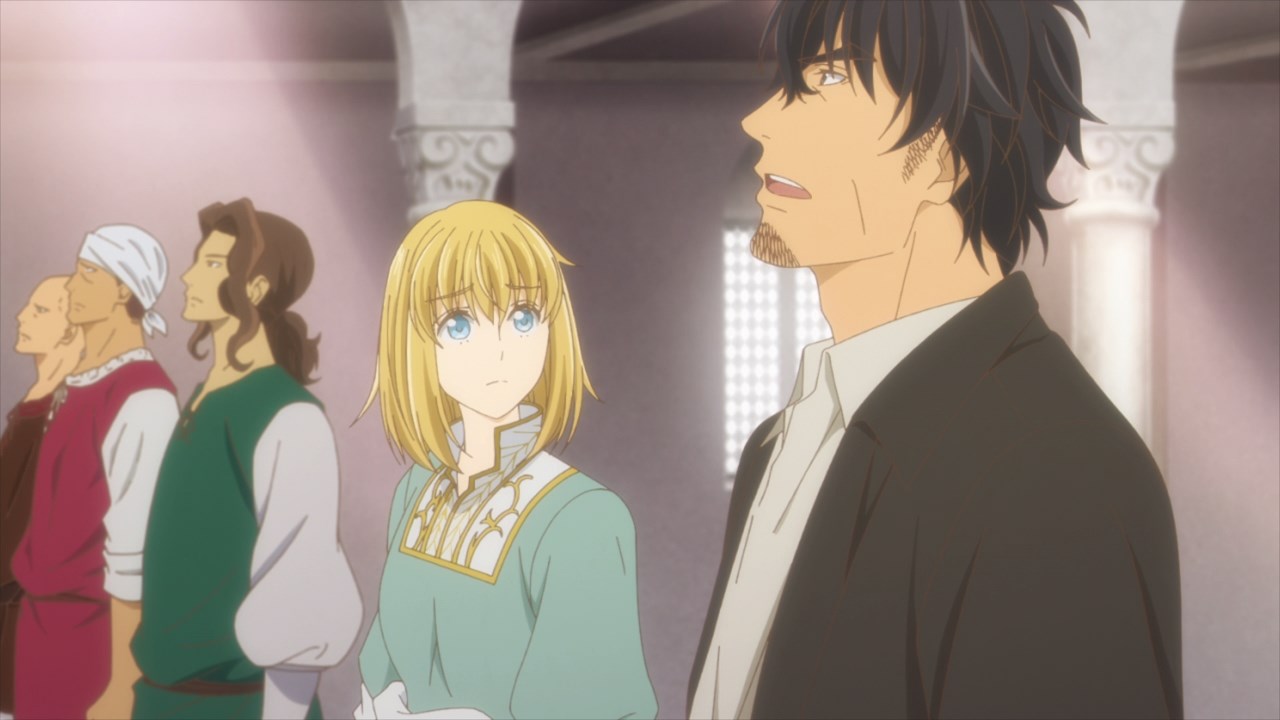 Well, he was impressed that Arte and the rest finished the mural without his supervision. Still, Leo will add some finishing touches later but anyways, everything is all good. 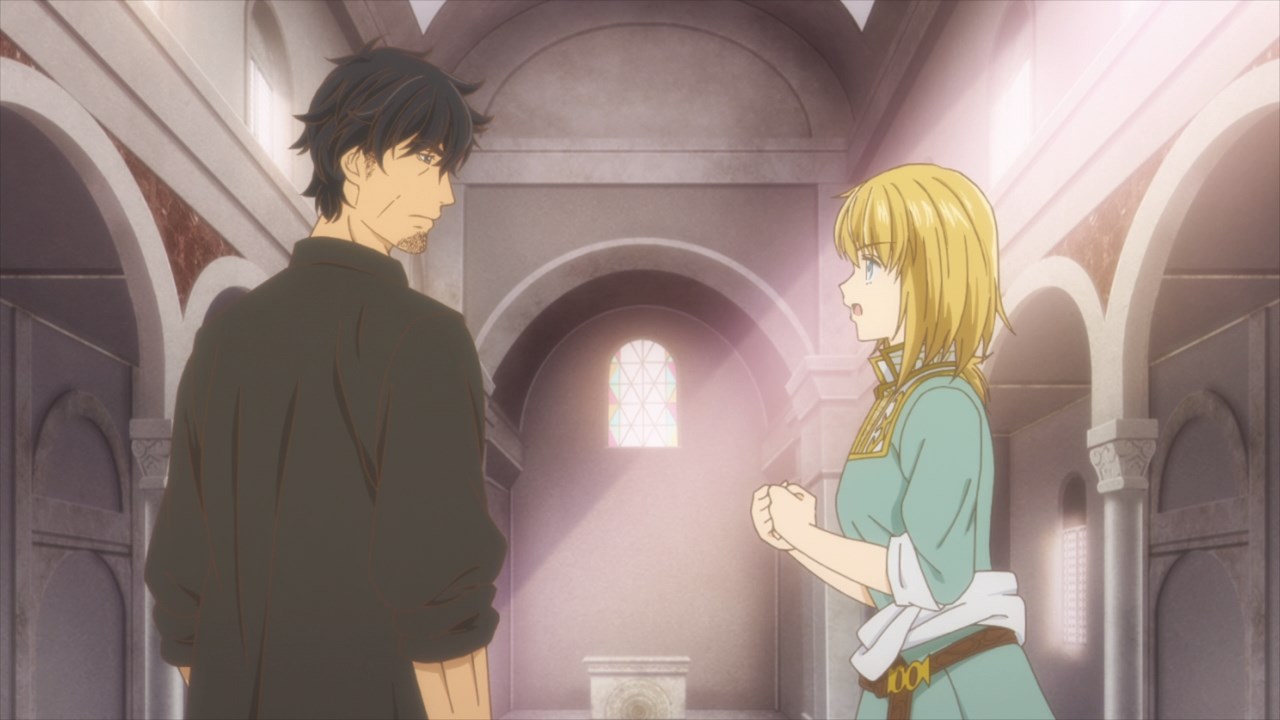 And here’s Arte where she’ll continue to be an apprentice to Leo. While it’s nice that she’s reunited with her master, Arte will leave Leo’s workshop to become a better artisan someday.

Of course, it’s not like Arte will leave Leo to far-flung places as she still have more things to learn in the future. 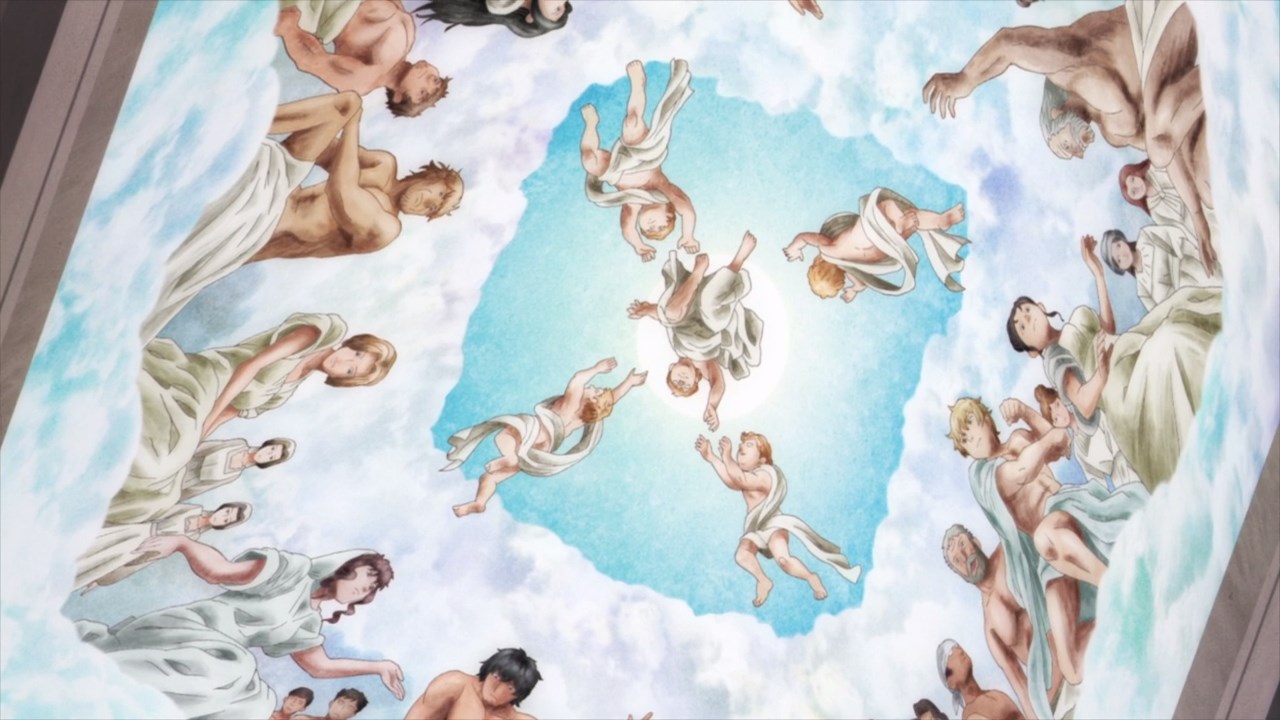 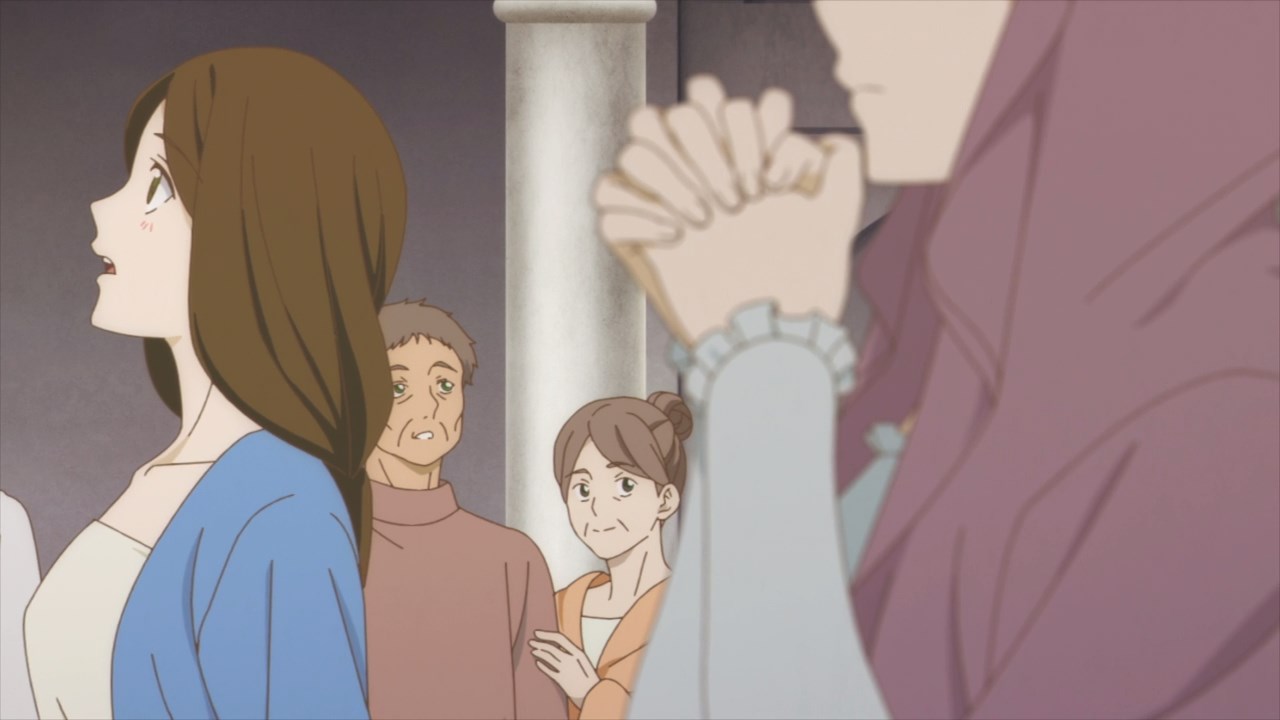 And now, Easter has finally arrived as various people from all walks of life are mesmerized at the ceiling mural.

Oh and you’ve probably noticed that the angels resembled some of the various people that Arte met in her life such as Yuri Falier, Veronica, and even Leo. 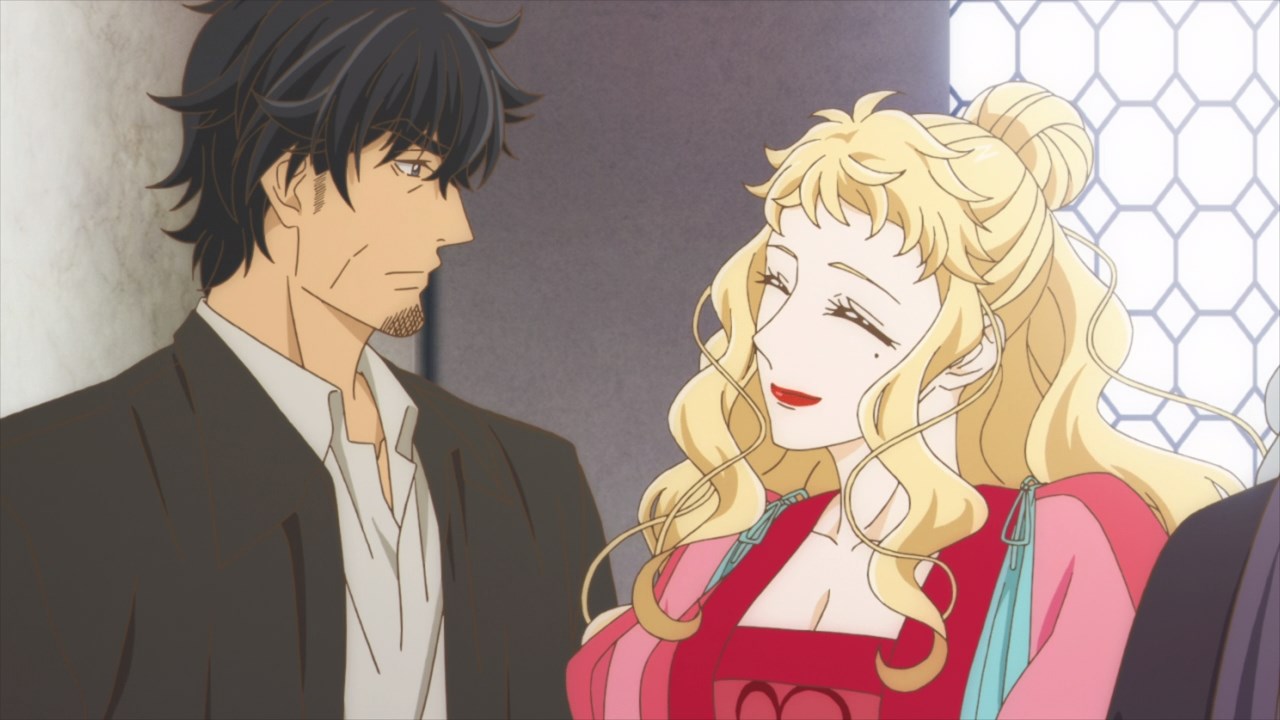 For the likes of Ubertino and Veronica, they’re impressed on how Arte has grown under Leo’s tutelage that they’re planning to give some art commissions to her in the future. 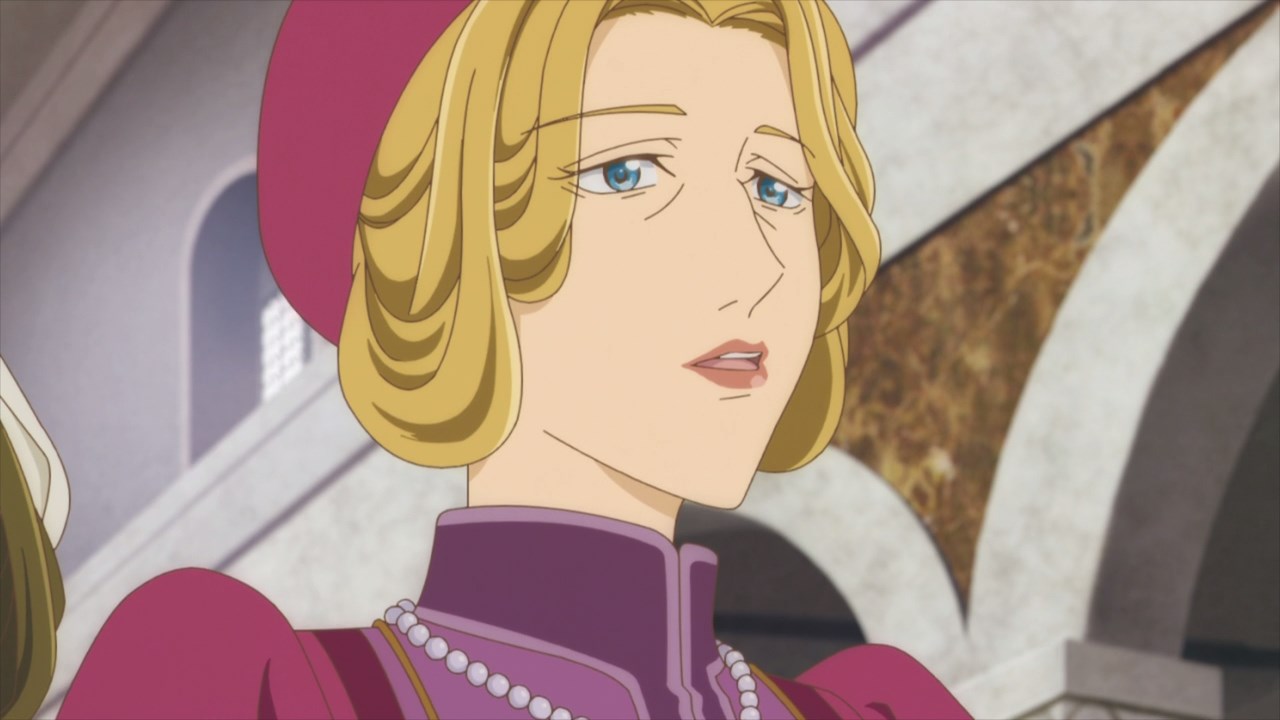 One last thing, here’s Arte’s mother as she’s in awe at the ceiling mural and not only that, but her daughter is the one who finished the painting when Leo is recovering from a fever. 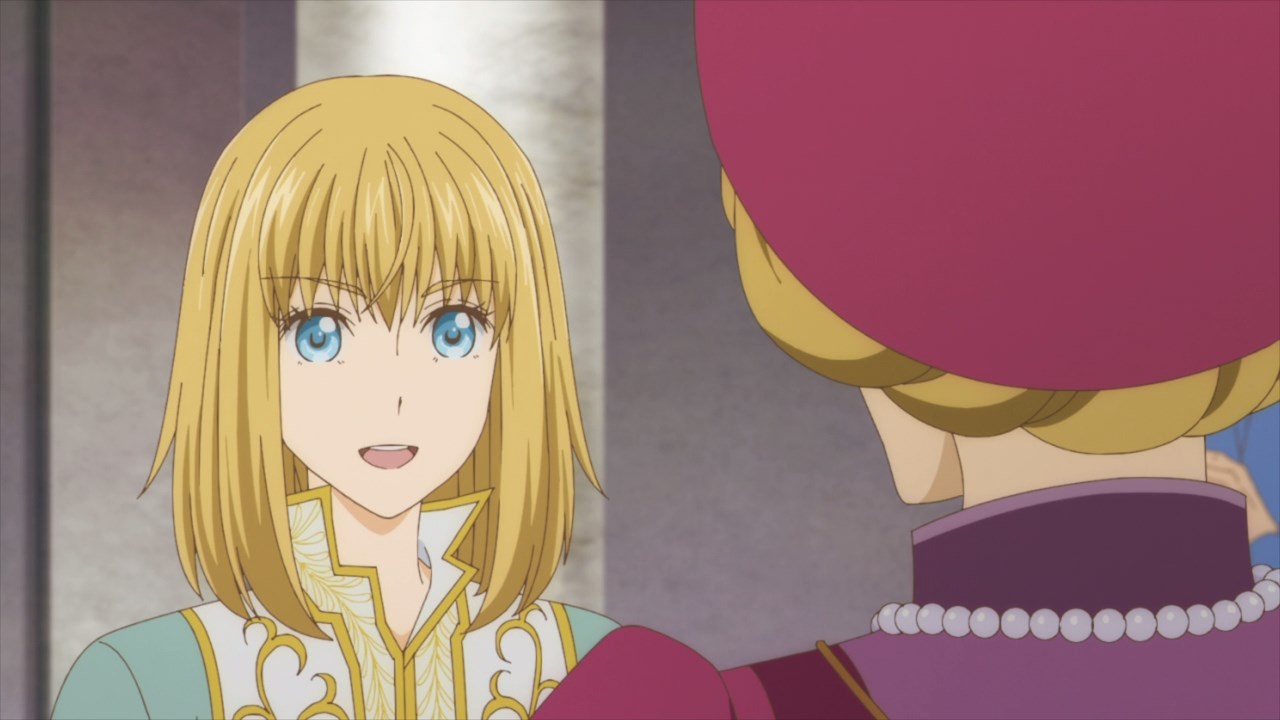 And here’s Arte where she thanked her mother for coming at the church to see the mural. I have to say that Arte’s mother is convinced that her daughter becoming an artisan is a promising one.

But that’s the end of Arte’s artisan journey for the time being and man, I’m happy to see her progression during the course of the show. Aside from the story, Seven Arcs did well on the anime adaptation. While it’s not ground-breaking, Arte is a decent and interesting show to watch. 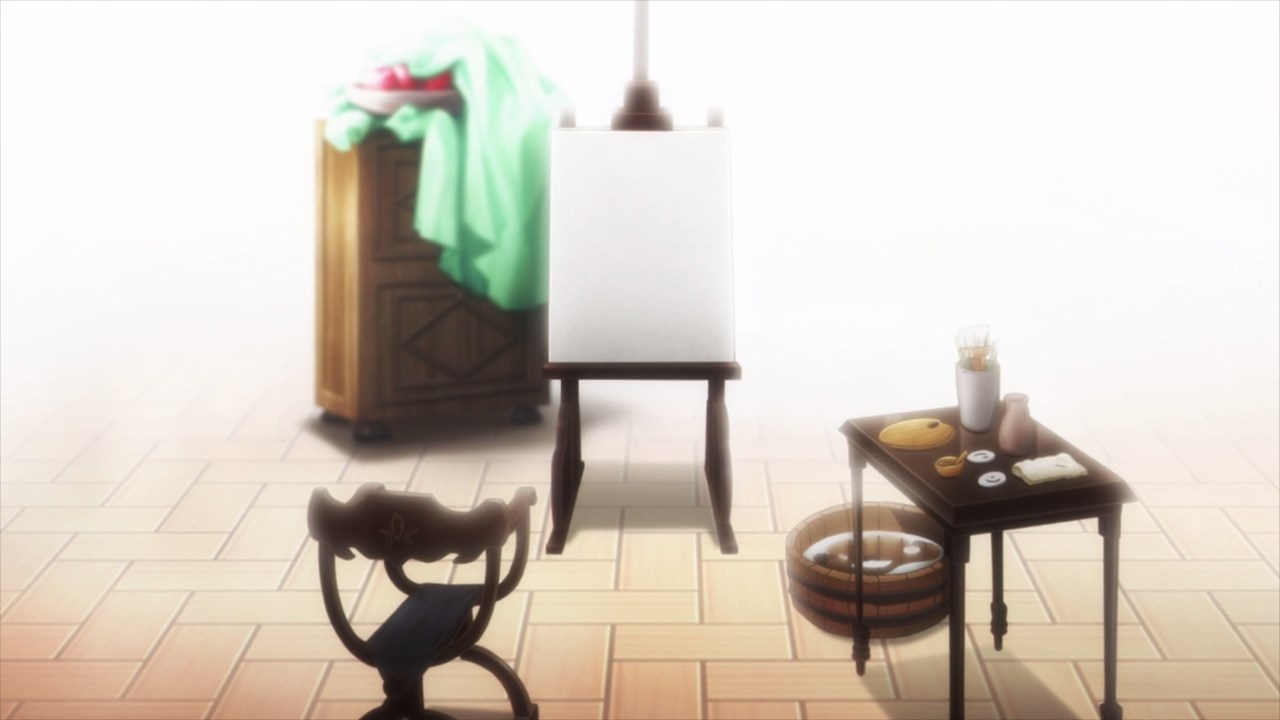 Still, Arte has a long way to go before she’s accepted by everybody. Then again, I don’t think we’ll have another season of it but that’s okay as I’m satisfied with the ending of this anime adaptation by Seven Arcs.

So until then, I bid Arte good luck on her endeavors as an artisan.