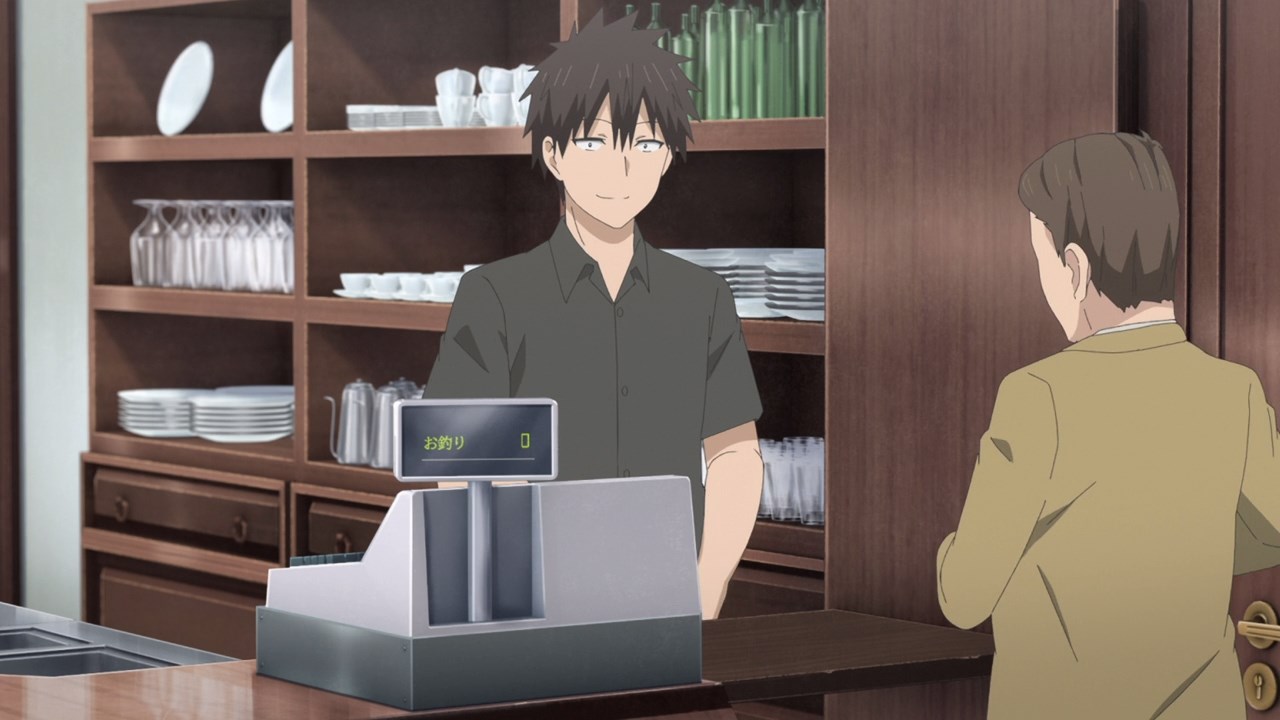 Hey everyone, here’s Shinichi Sakurai where he’s doing his best as a part-time worker at a cafe. At least Sakurai has something to do rather that laze around all day. 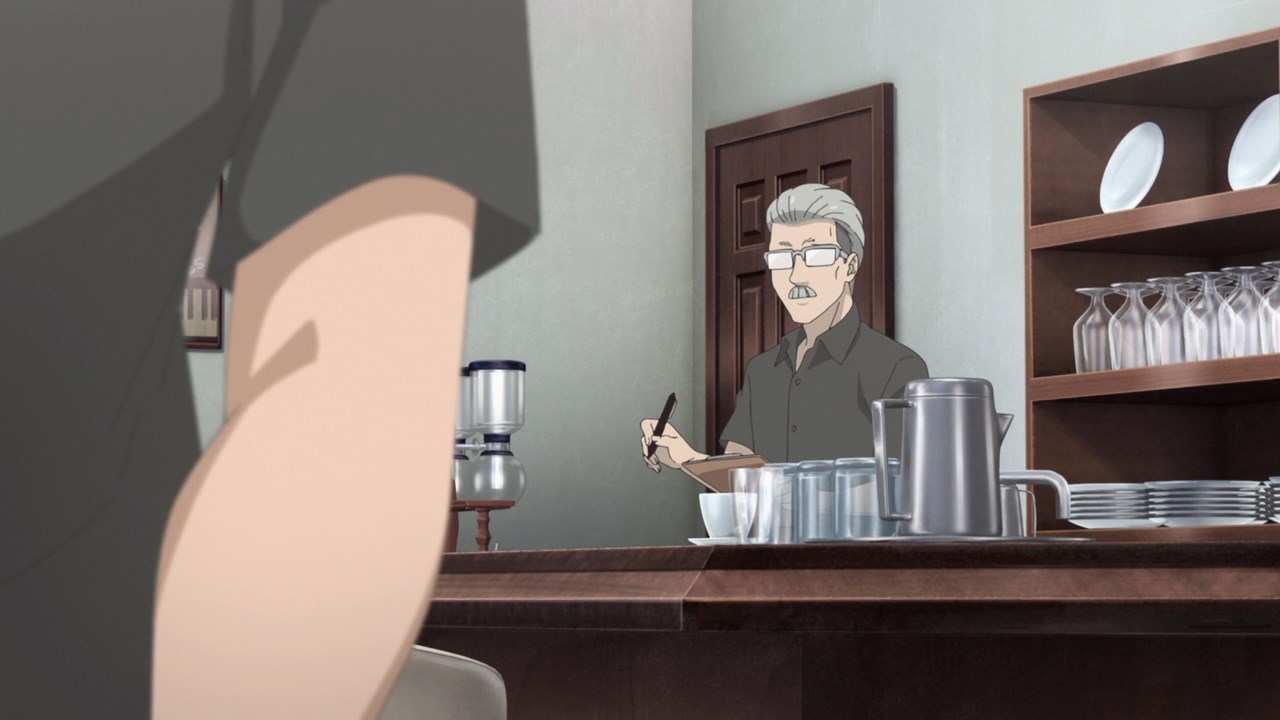 Also, here’s the cafe owner named Akihiko Asai who’s very happy that Shinichi spends his time working earnestly that he might consider giving Sakurai a salary raise in the future.

Then again, little did Asai-san know is that Sakurai has a junior who’s annoying and has big breasts. 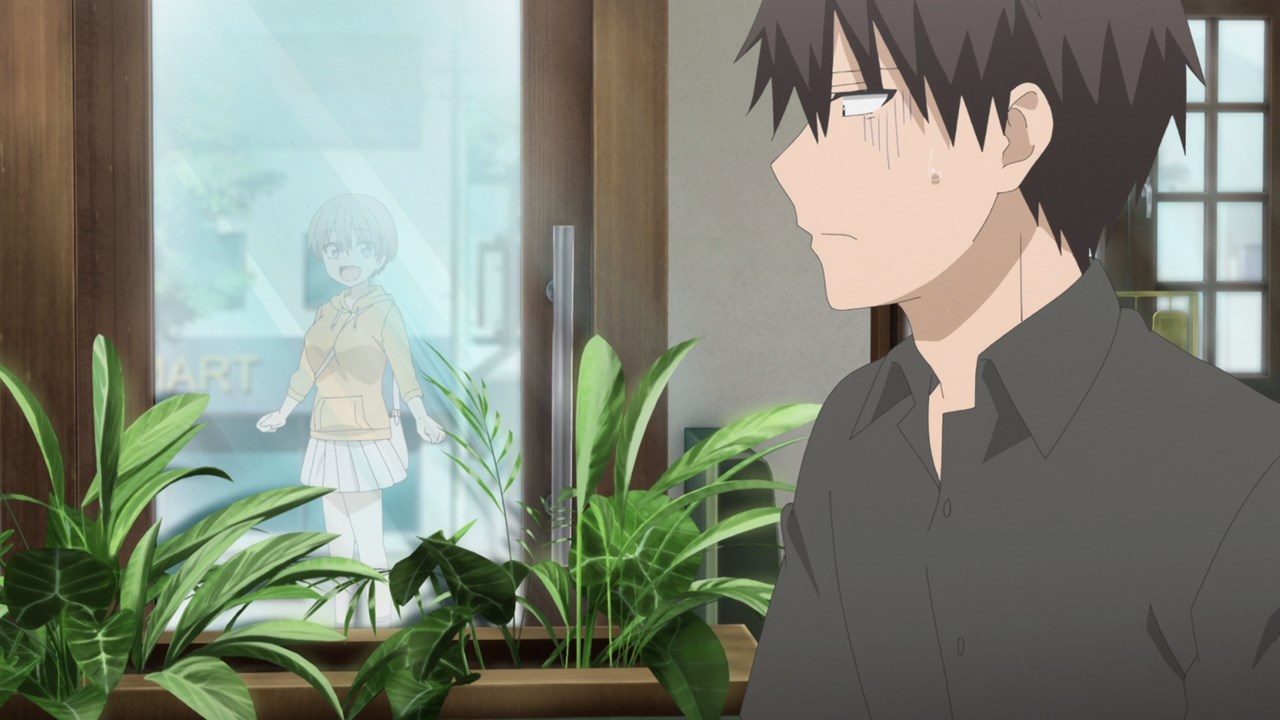 Yes, I’m talking about Hana Uzaki where she’s surprised that Sakurai-sempai is working at a cafe, although Shinichi is not really happy about it. 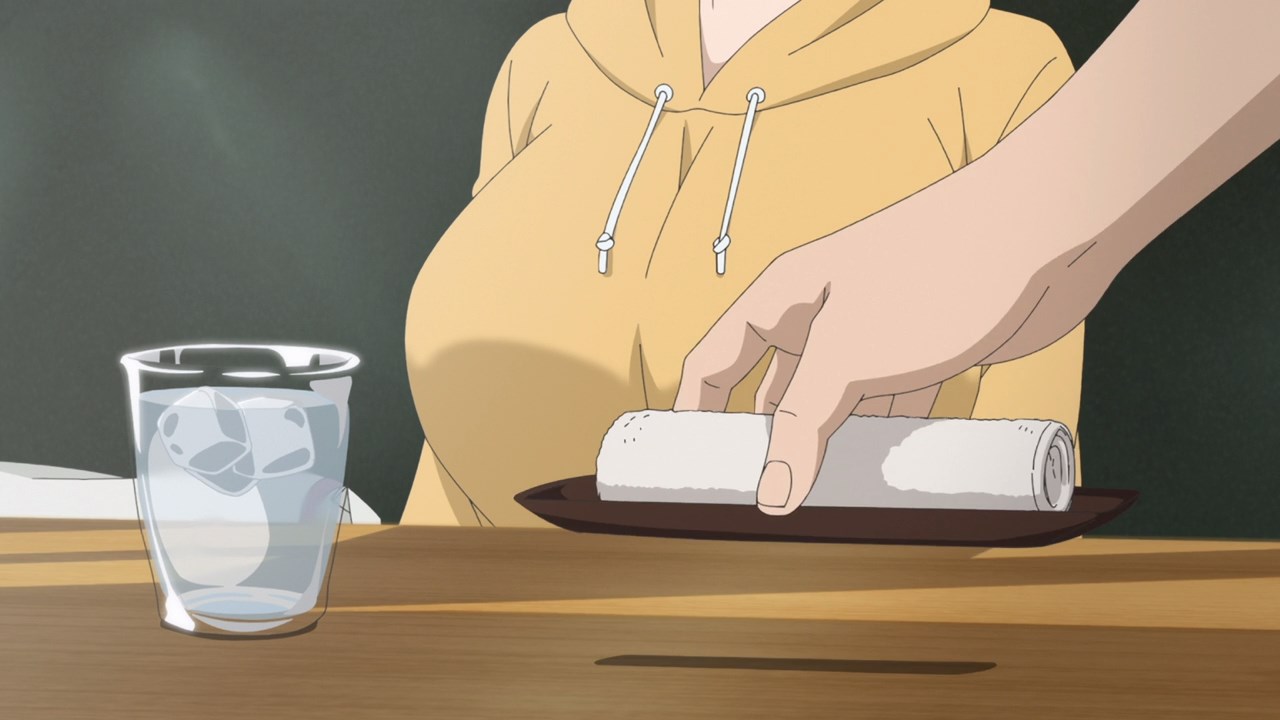 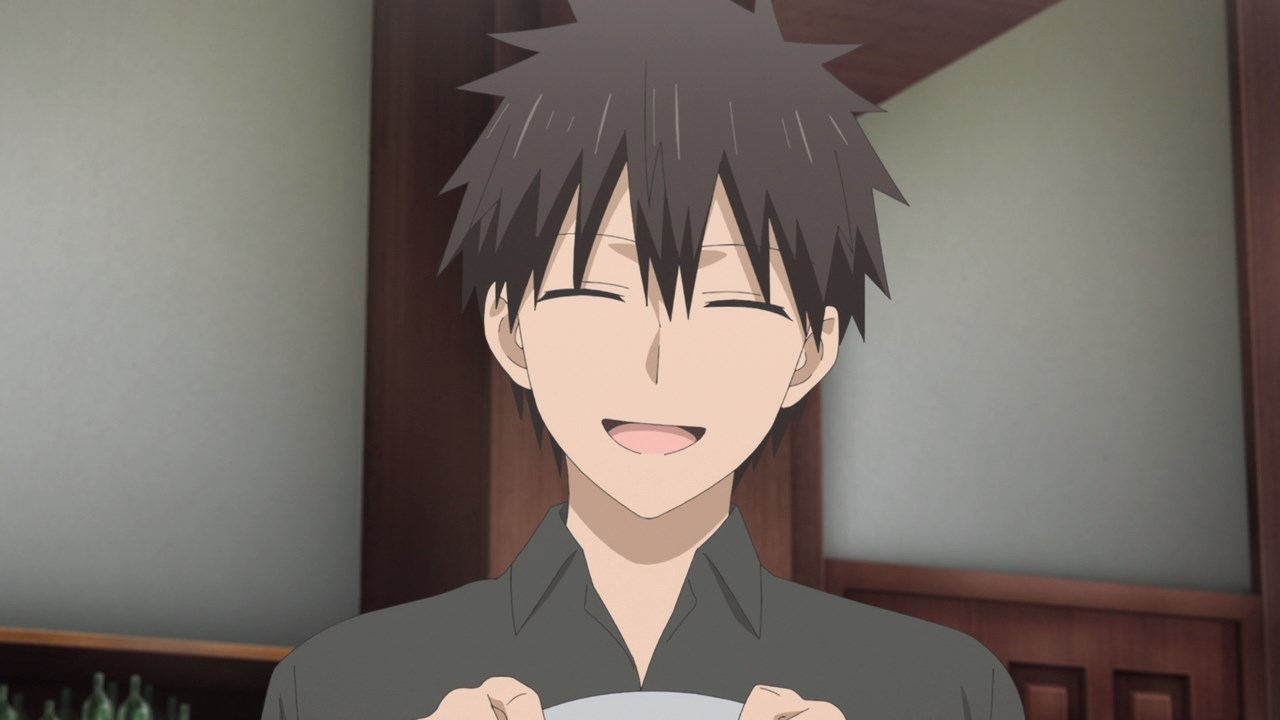 But you know what, the only way for Shinichi Sakurai to shut Hana Uzaki’s mouth is to treat her with kindness. After all, he’s working as a waiter where he treats his customers nicely. 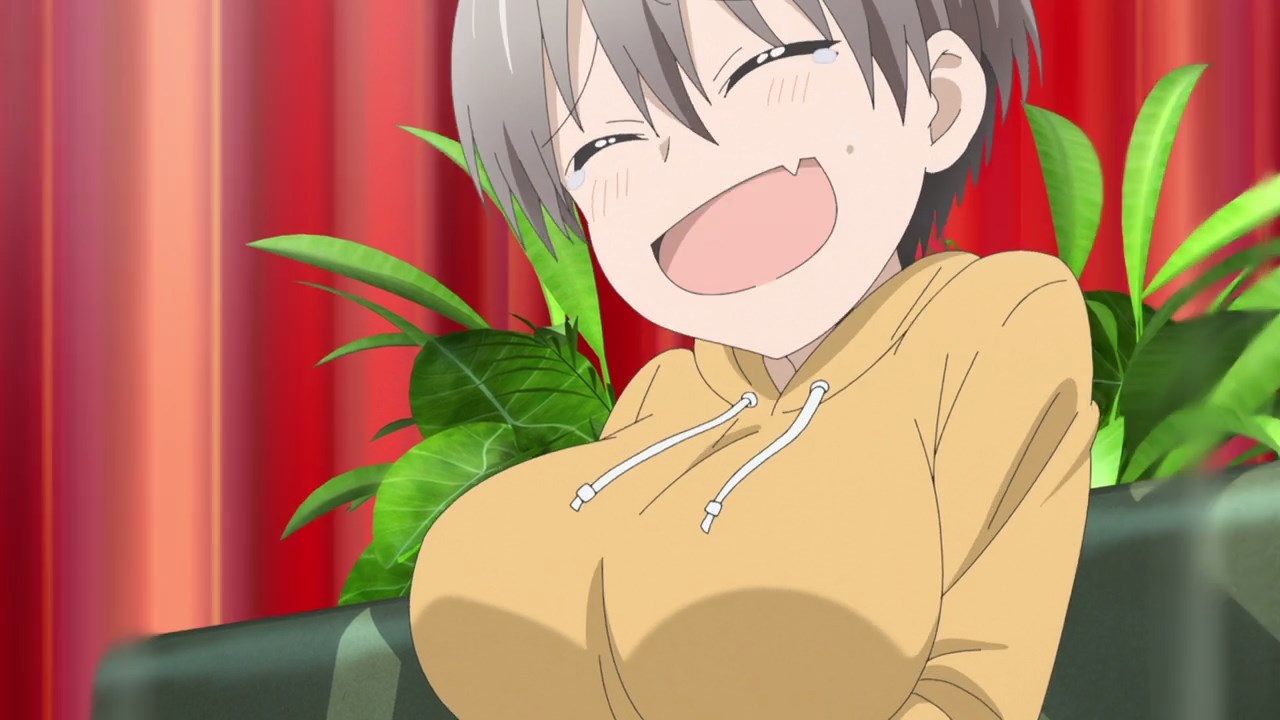 Of course, Uzaki didn’t get the memo as she laughs at him for being a dork. Um Uzaki-chan, you shouldn’t trigger Sakurai or he’ll lose his patience. 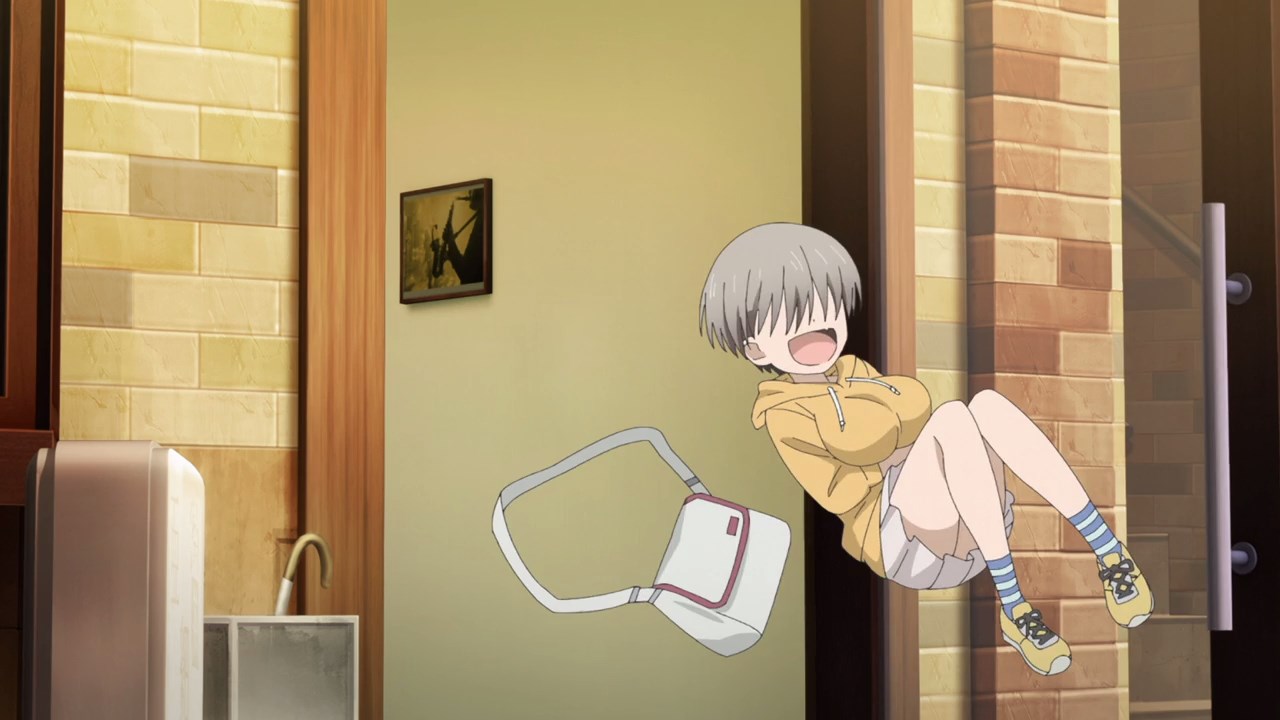 Naturally, Shinichi Sakurai shove his obnoxious kouhai out, which is a bad idea ’cause he might lose his part-time job.

Well on the contrary, Asai-san decided to let Sakurai stay because he’s interested on his underclasswoman. 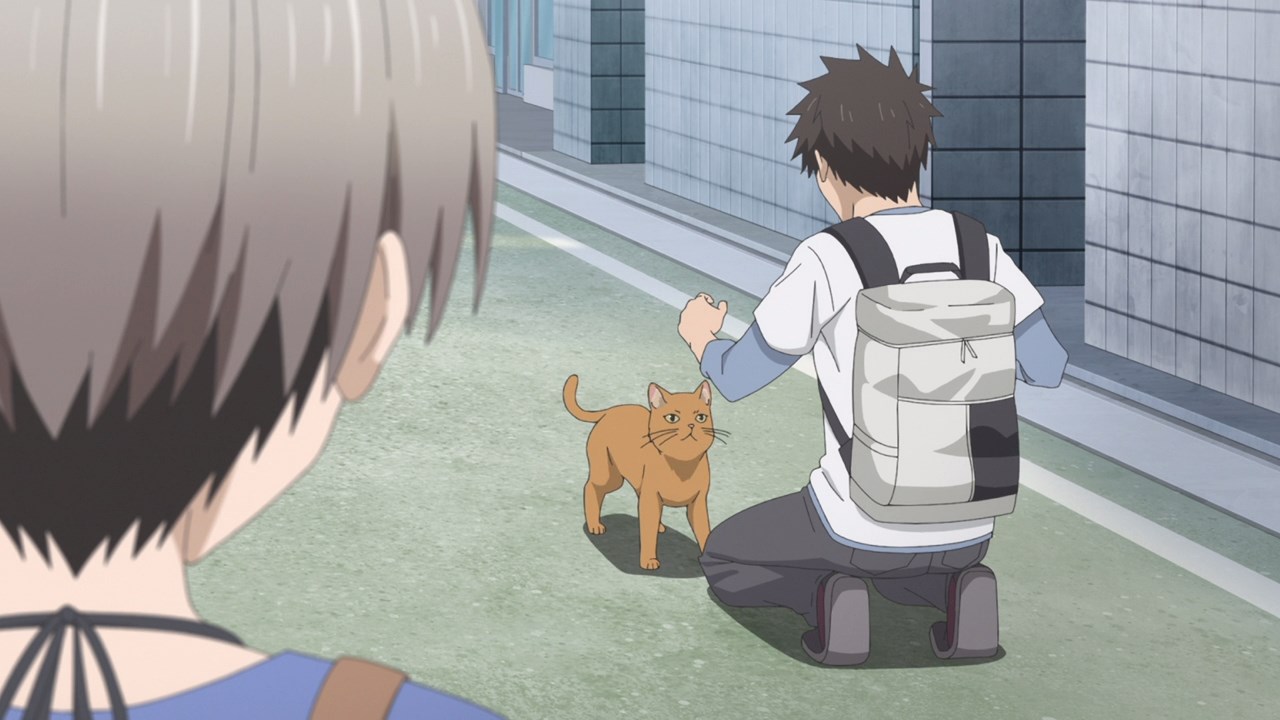 Now then, let’s move onto the next scene where Shinichi Sakurai tries to pet a stray cat, but he received scratches instead which sucks for him. 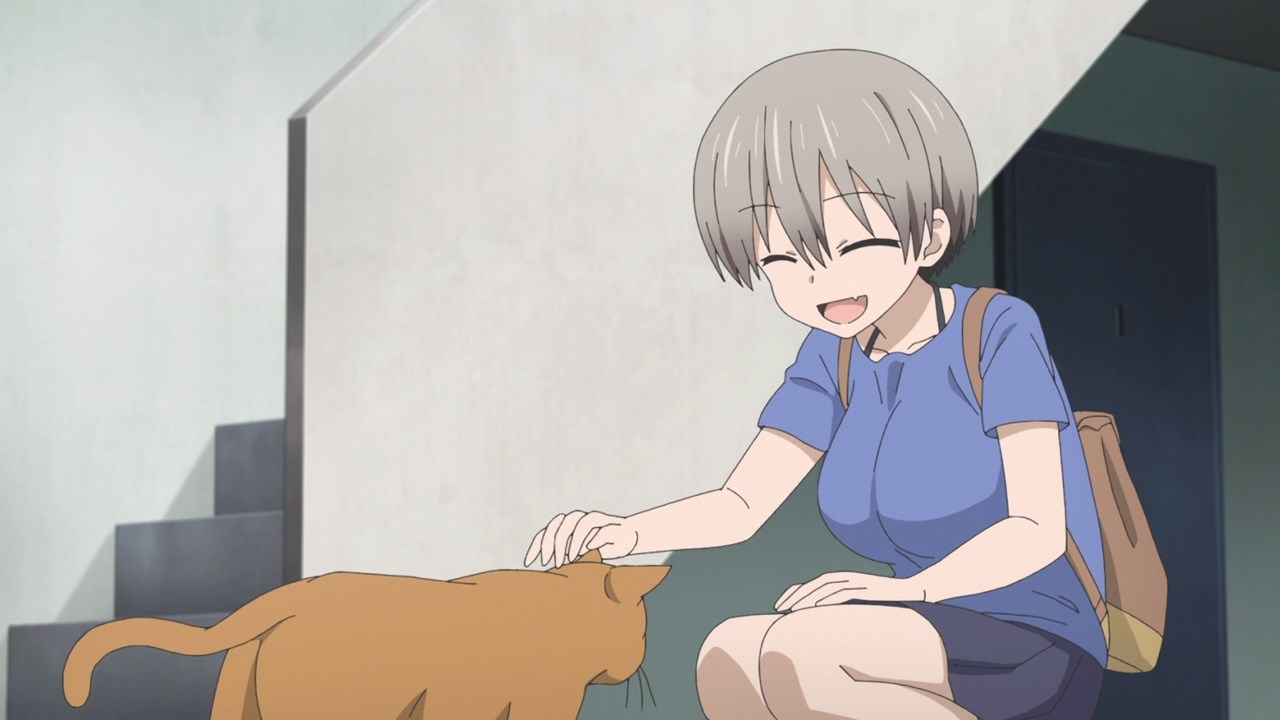 But for Hana Uzaki however, it appears that this stray cat loves her. In fact, Uzaki owned some pet cats at her home which makes Sakurai very jealous towards his kouhai. 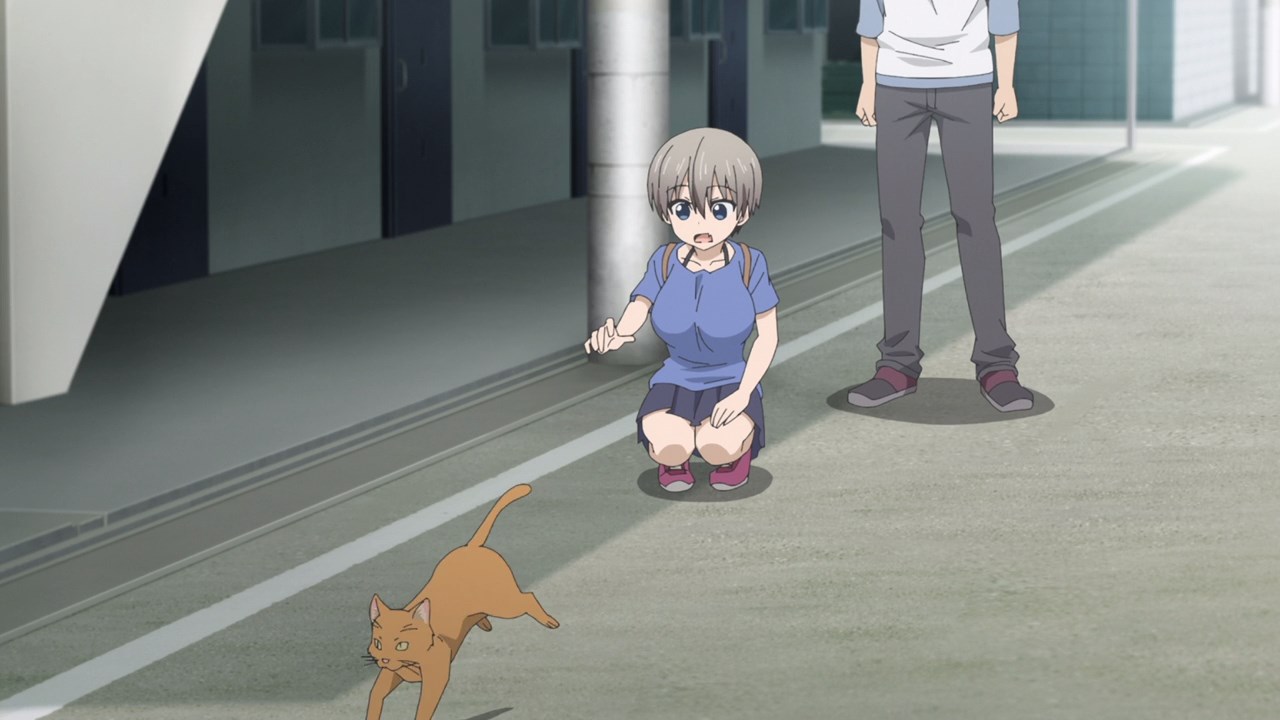 Unfortunately for Uzaki, her petting time with a stray cat is interrupted when someone blow a horn which scares the kitten away… 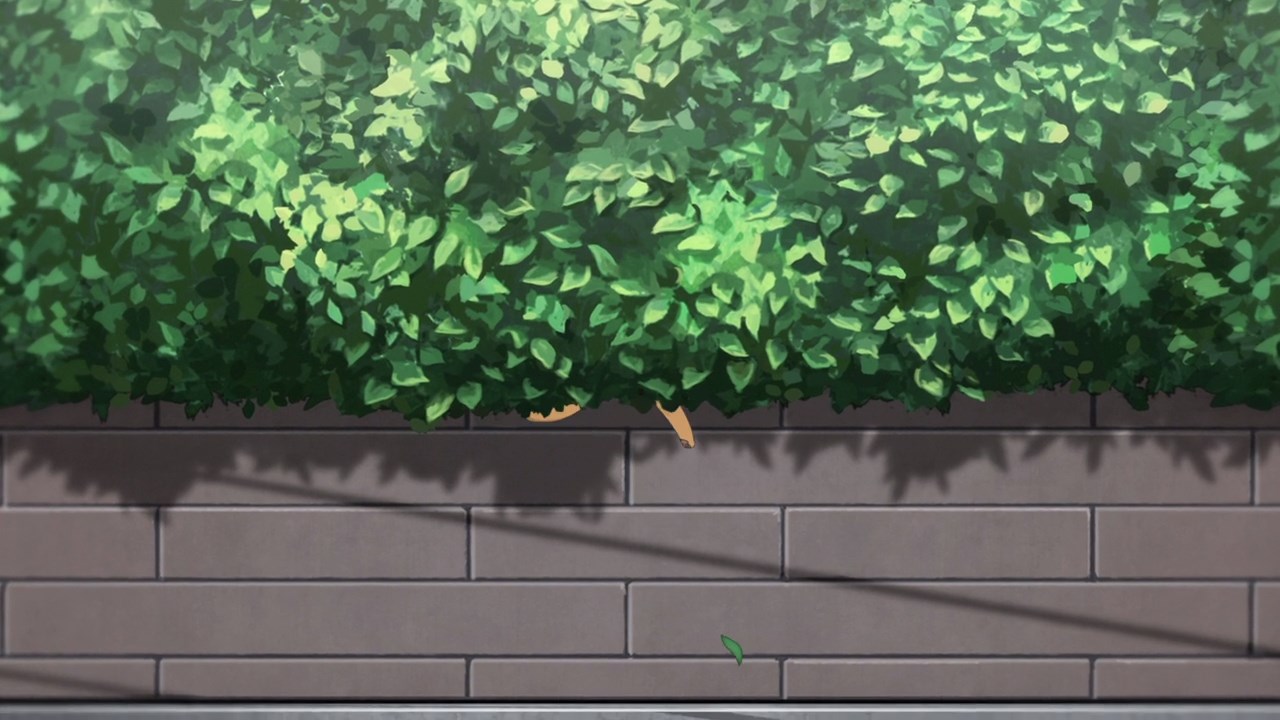 …and went to a bush to hide itself. Hm, I wonder if Uzaki-chan is gonna get the kitty over there ’cause it’s a bad idea. 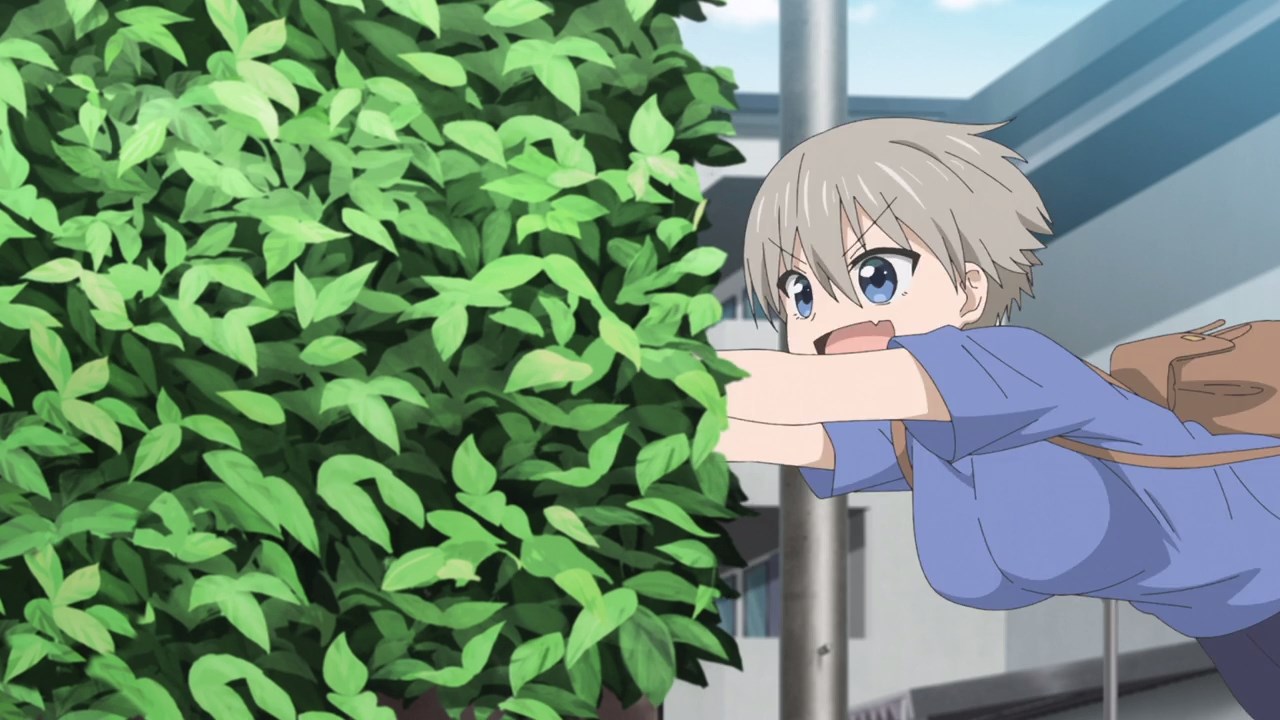 Yet, she decides to dive into the bushes anyway as Uzaki tries to get the stray cat. I have a feeling that she’ll get stuck there. 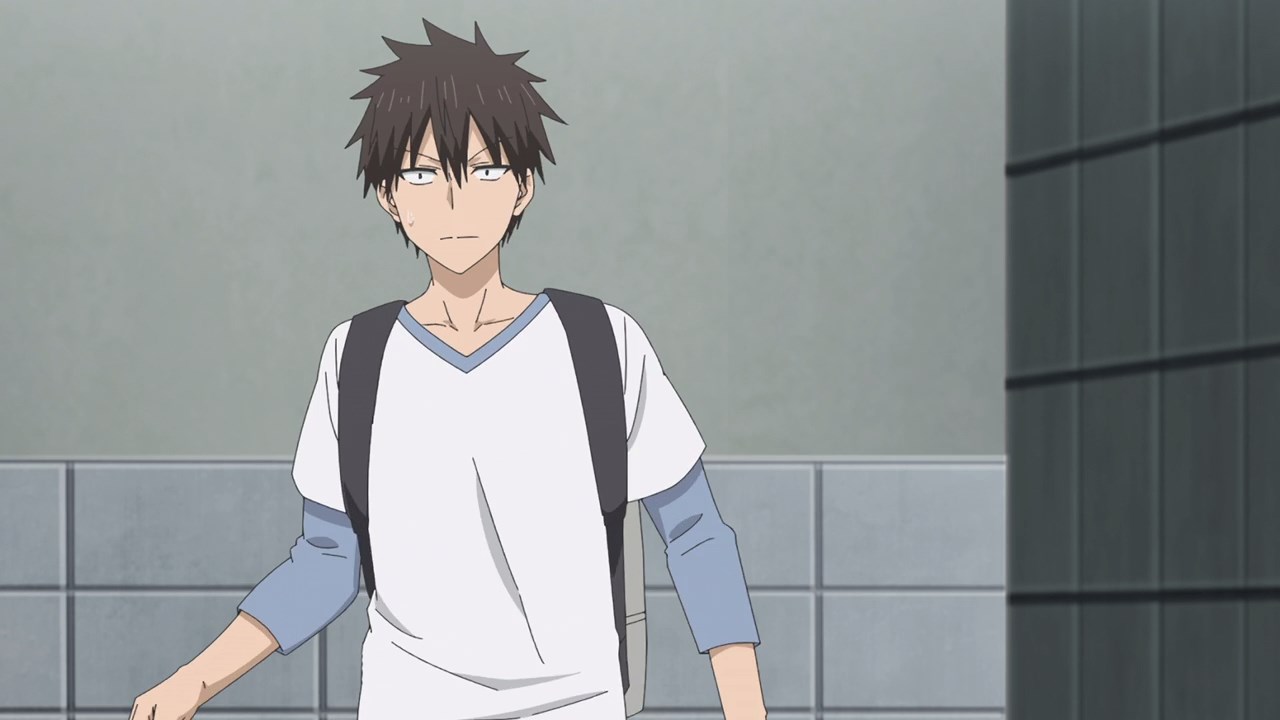 Anyways, Shinichi Sakurai went to help his junior but he founds himself in a bind of the perverted kind. 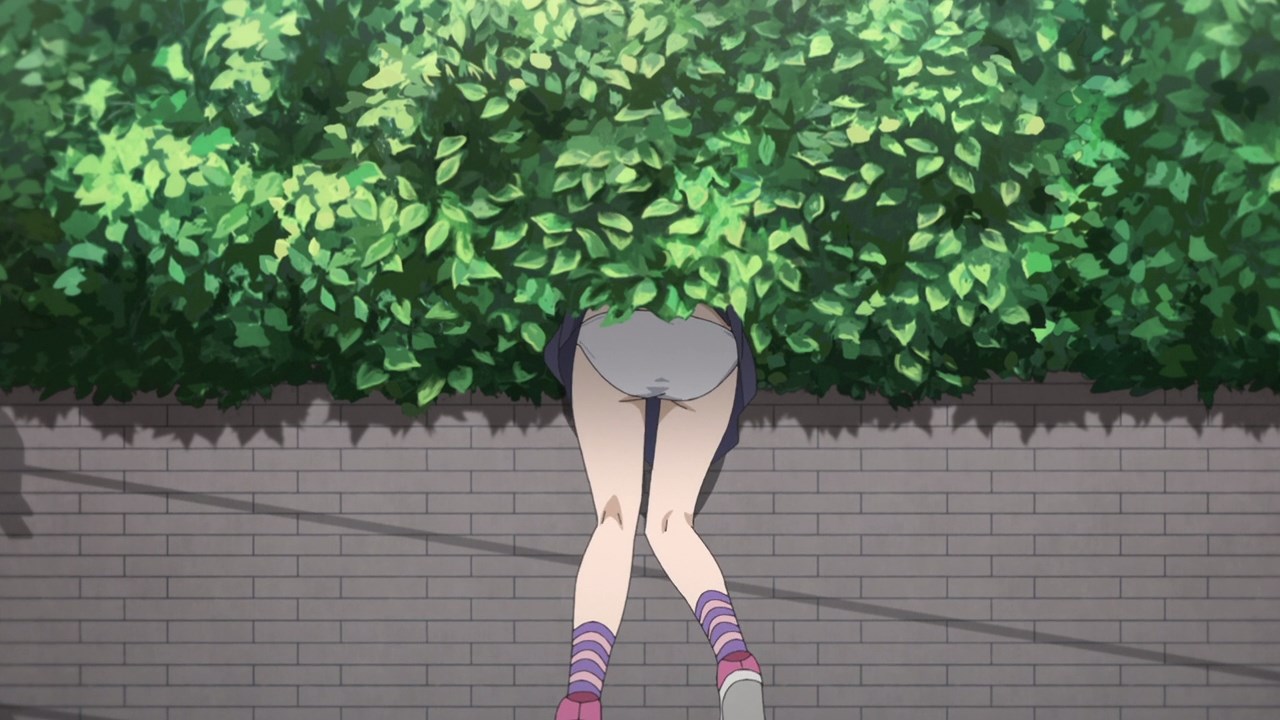 Turns out, Hana Uzaki got stuck inside the bushes and not only that, but her panties are showing. Oh I bet that someone is gonna take advantage of this situation. 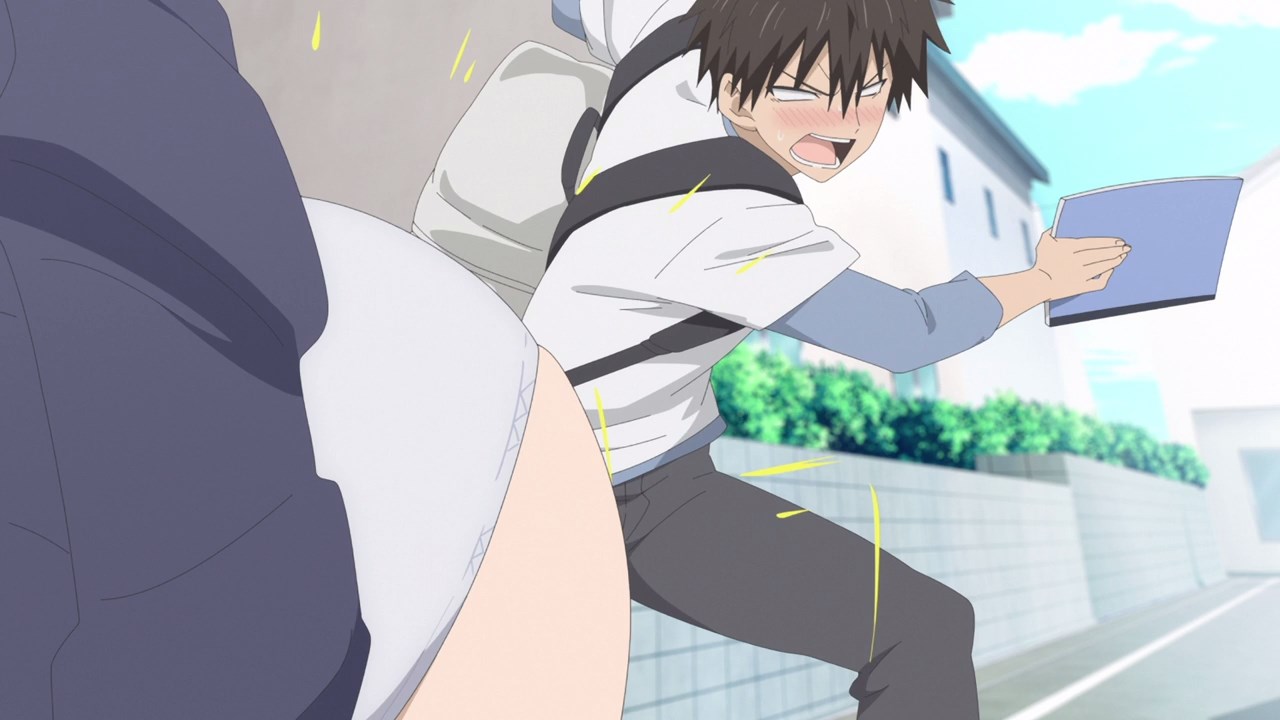 Well, not for Sakurai though because he’s gonna slap Uzaki’s ass with a notebook. Um Shinichi, why don’t you save your kouhai! 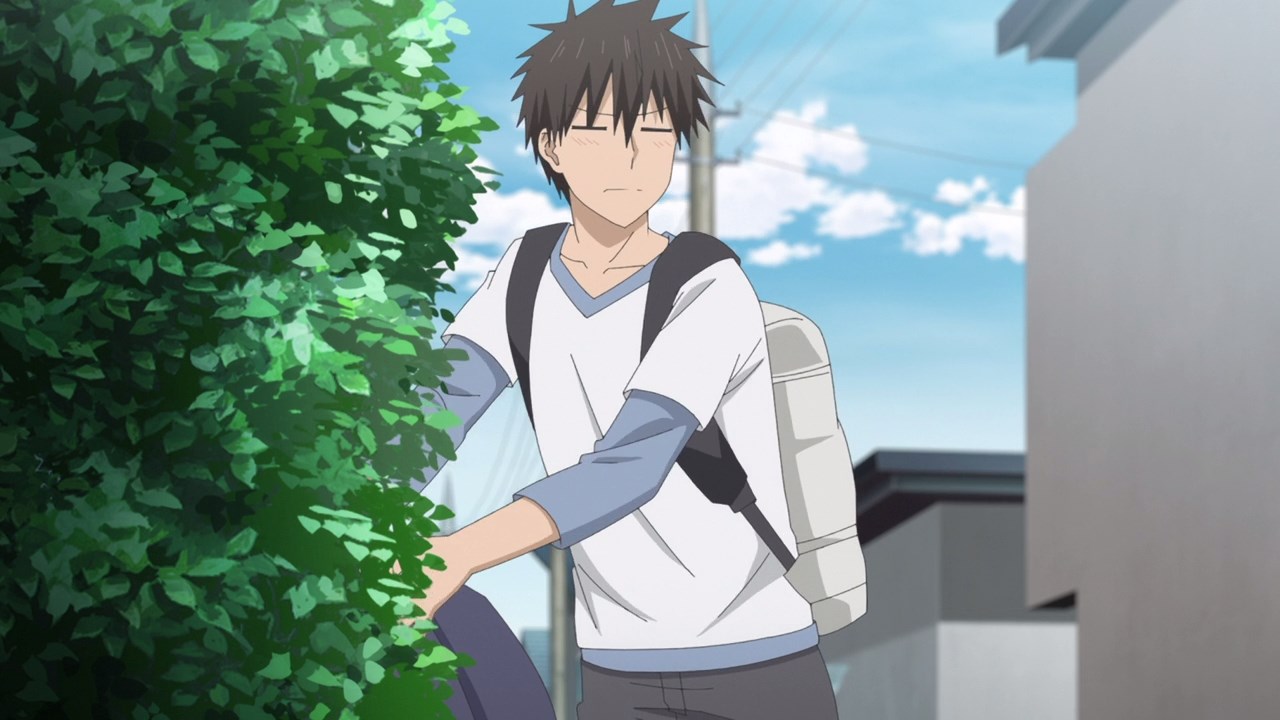 Then again, it seems that holding Hana Uzaki from the hips is gonna make some bad assumptions. Heck, I fear that women might see Shinichi Sakurai as a rapist. 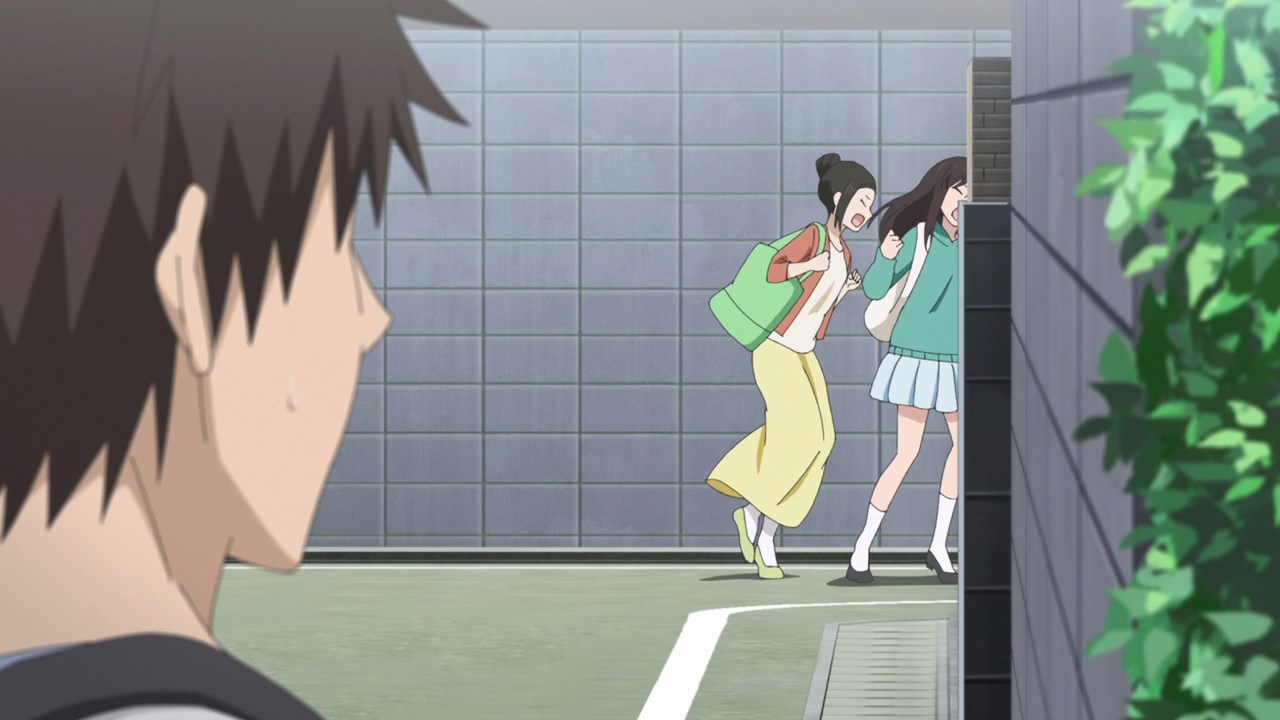 And as you can see here, these girls run away as fast as possible because they see Sakurai as a lech. Oh please, you got it all wrong! 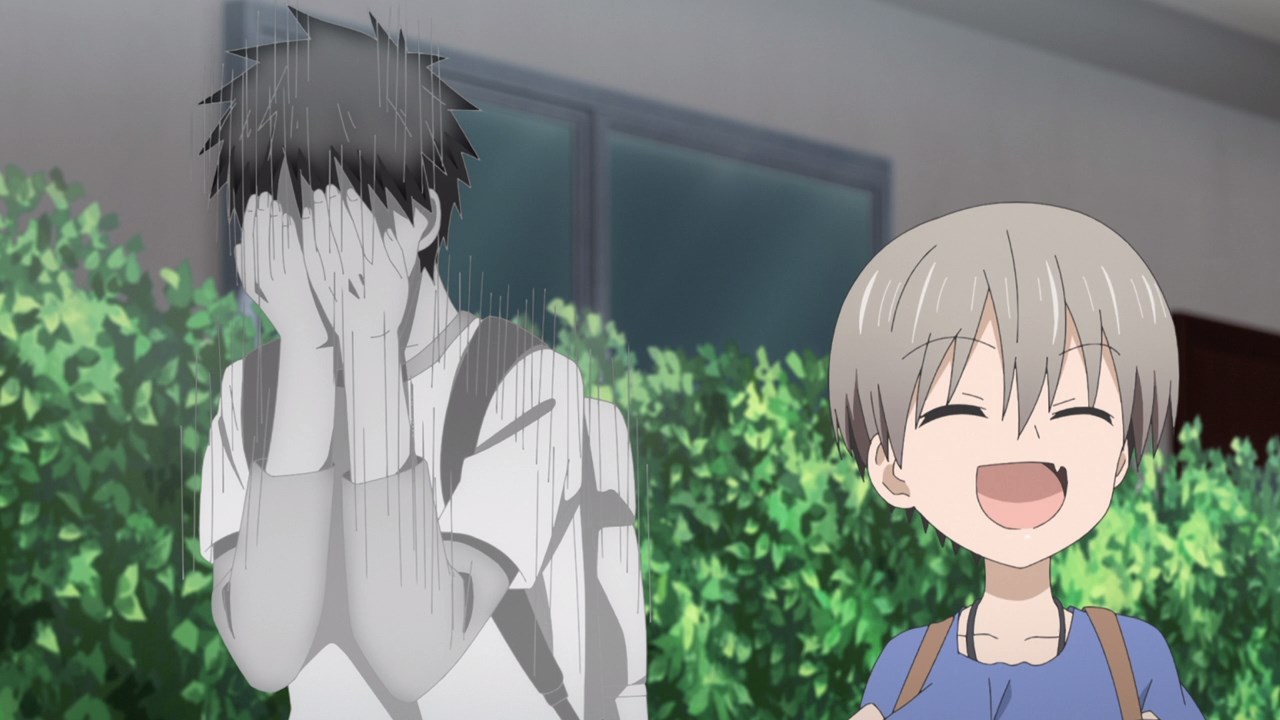 Fortunately, Shinichi managed to free his troublesome kouhai from getting stuck in the bushes forever, but it appears that Sakurai felt ashamed that he’s not the enemy of all women.

But you know what, I think he’ll be fine on the next episode… I hope!