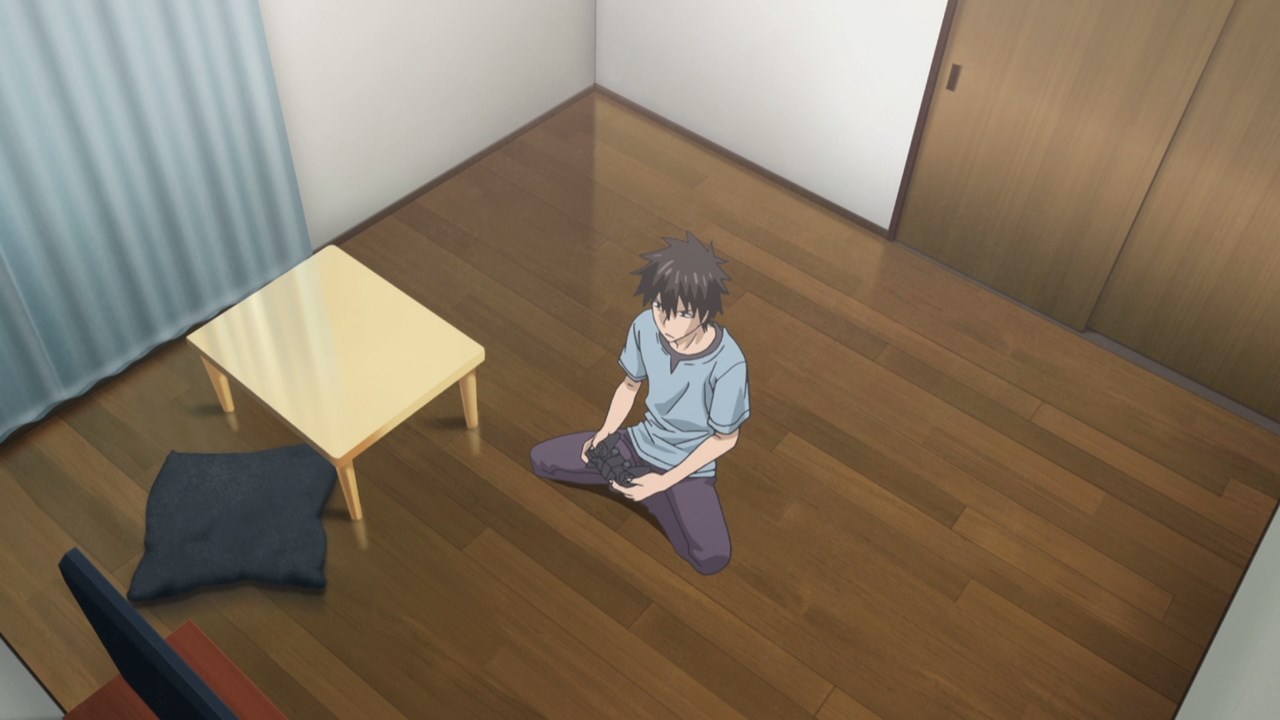 Ah Shinichi Sakurai, the loner who spends his Golden Week vacation playing video games. Oh, and Sakurai played it for 3 days straight which I’m very worried that he might get sick after finishing one game! 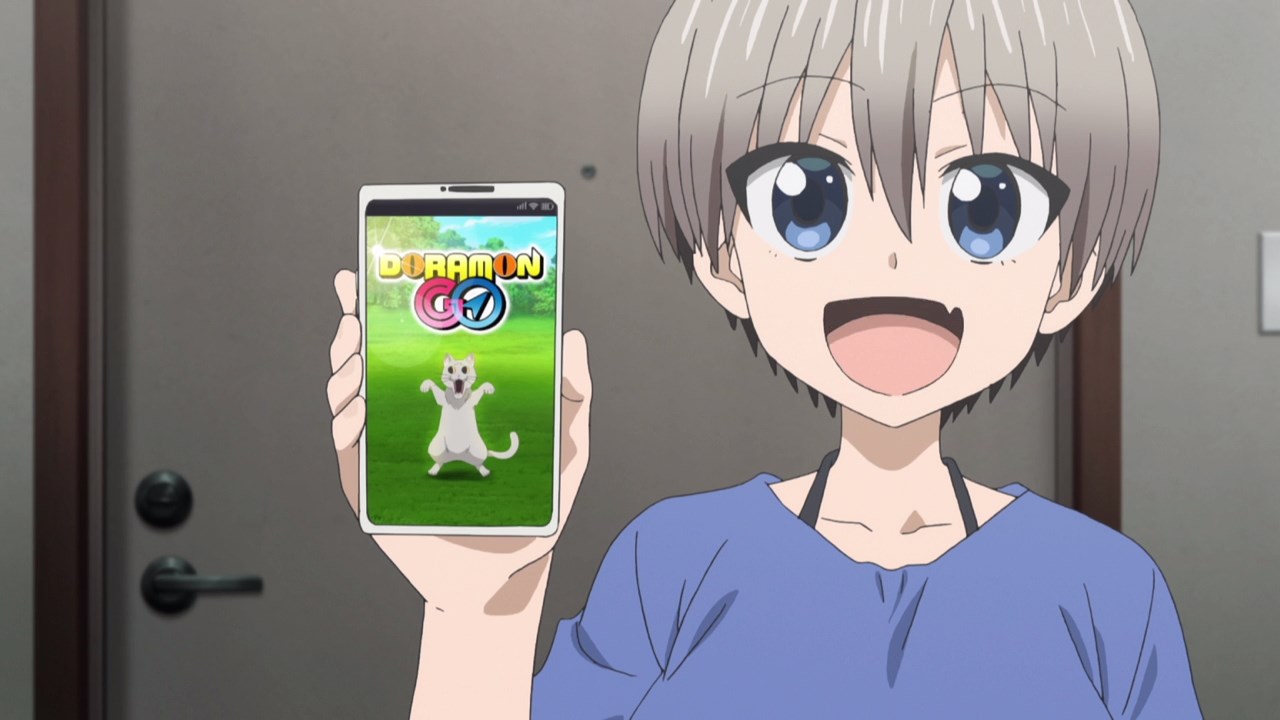 And then, there’s Hana Uzaki where she’s inviting Sakurai to join her on playing Doramon Go, although Shinichi doesn’t want to play with her because his eyes got strained for playing video games. 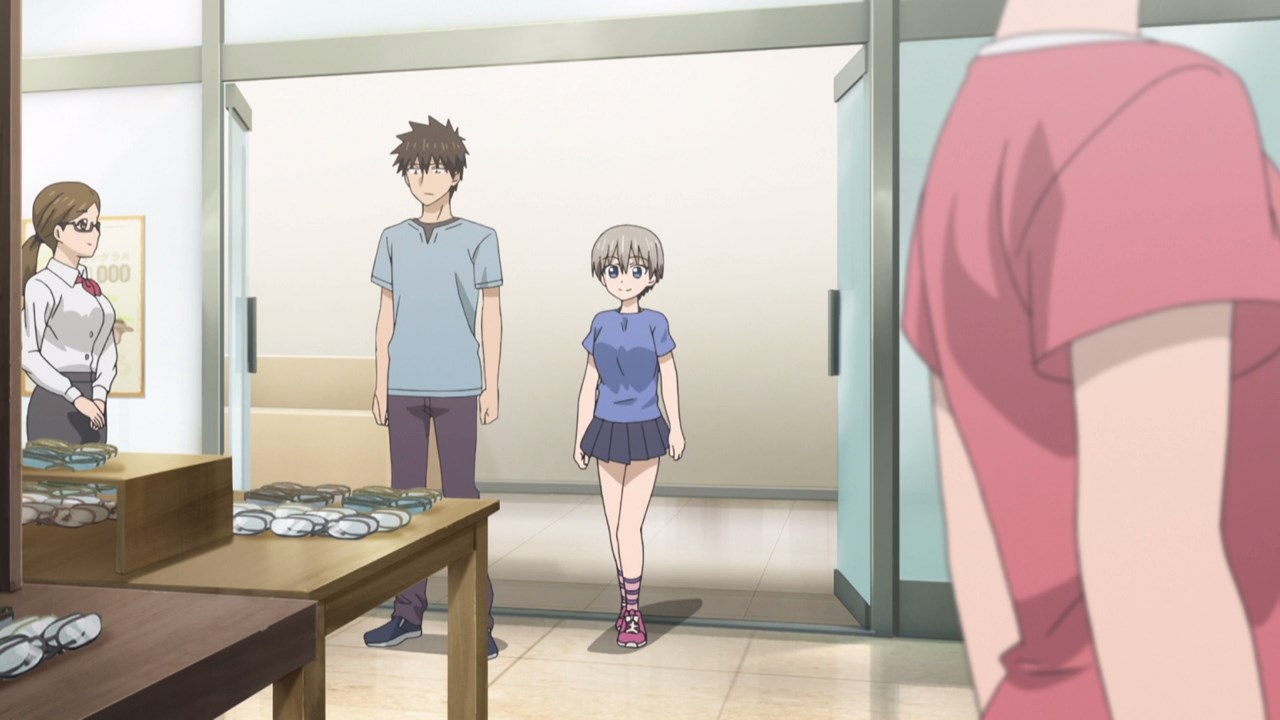 With that said, it’s time for Sakurai to get a pair of glasses as he and Uzaki-chan went to the optical wear shop.

Then again, I feel that they’re gonna waste time as c’mon, Shinichi will get teased by his obnoxious kouhai. 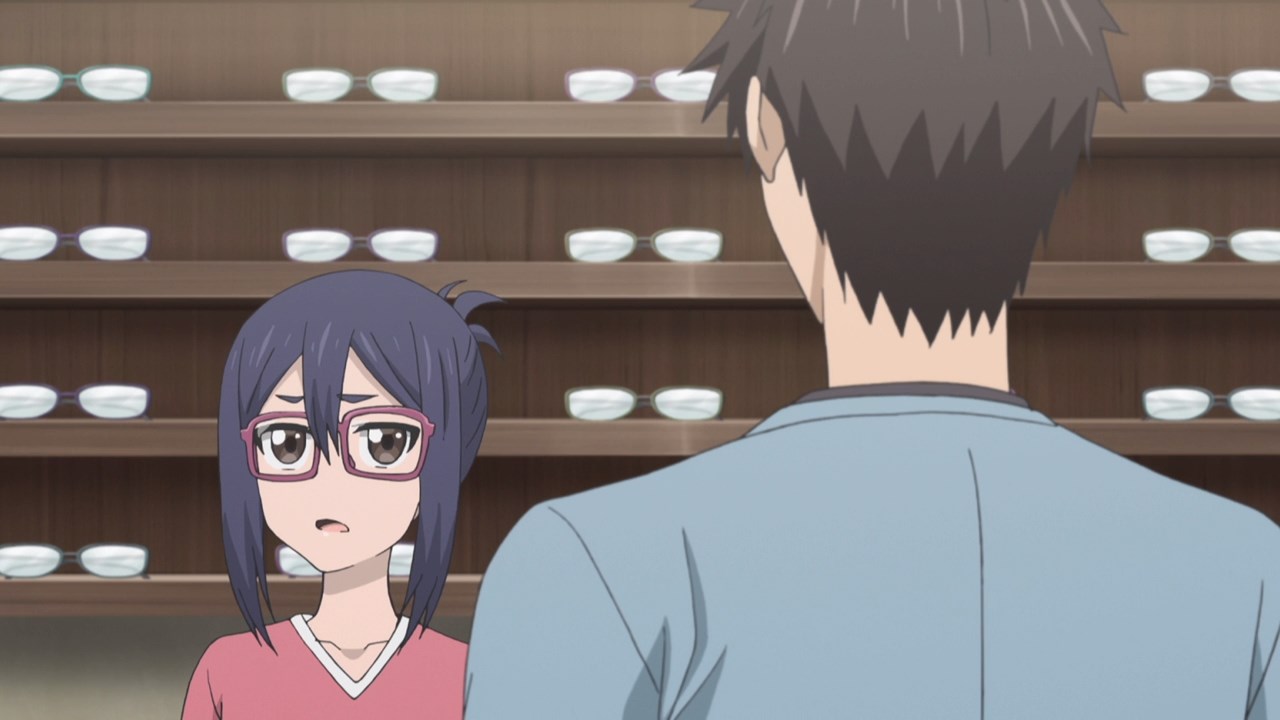 Oh yeah, here’s Ami Asai where she’s here to buy a new pair of glasses, although she won’t mind helping Sakurai on finding the right glasses for him. 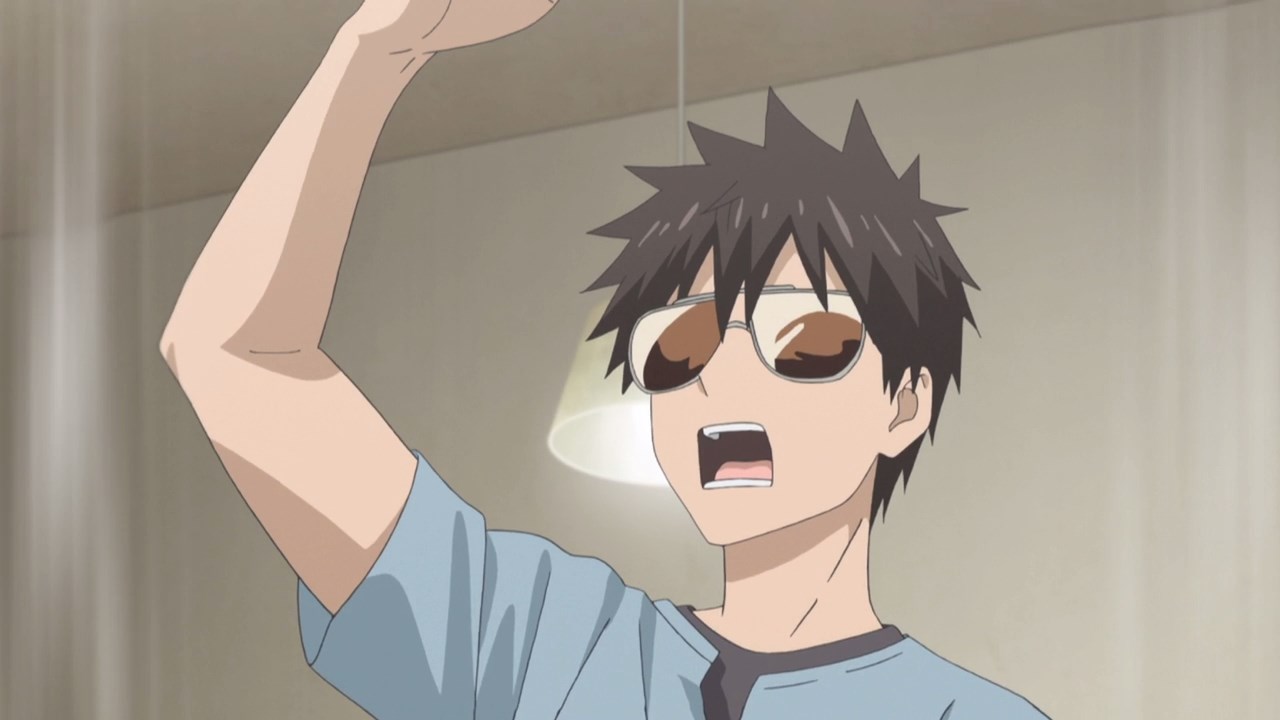 Except that Ami decided to pull a prank on Shinichi by wearing him shades and pose like Freddie Mercury. 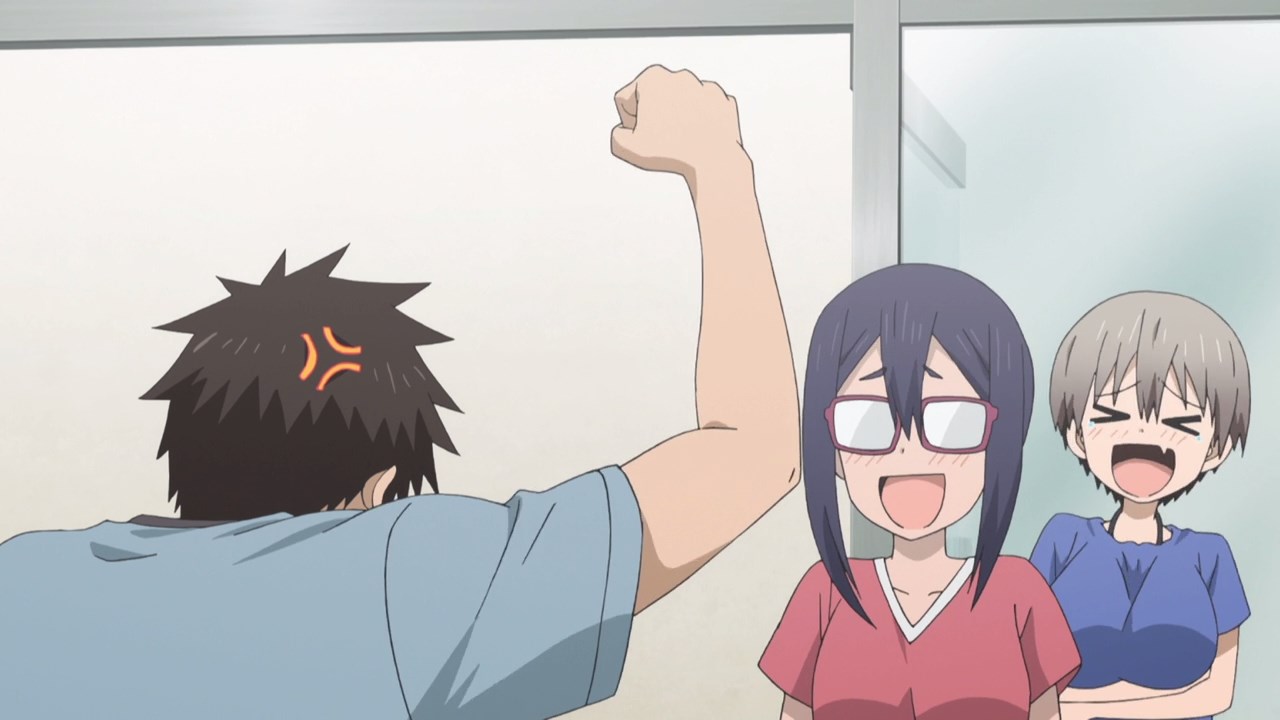 And the result is obviously hilarious as Ami Asai and Hana Uzaki couldn’t help themselves but laugh on Shinichi Sakurai’s ridiculous pose.

With that said, Sakurai decided not to buy a pair of glasses because of Uzaki’s constant mocking towards him. Um Shinichi, you should get some glasses or your eyesight will deteriorate. 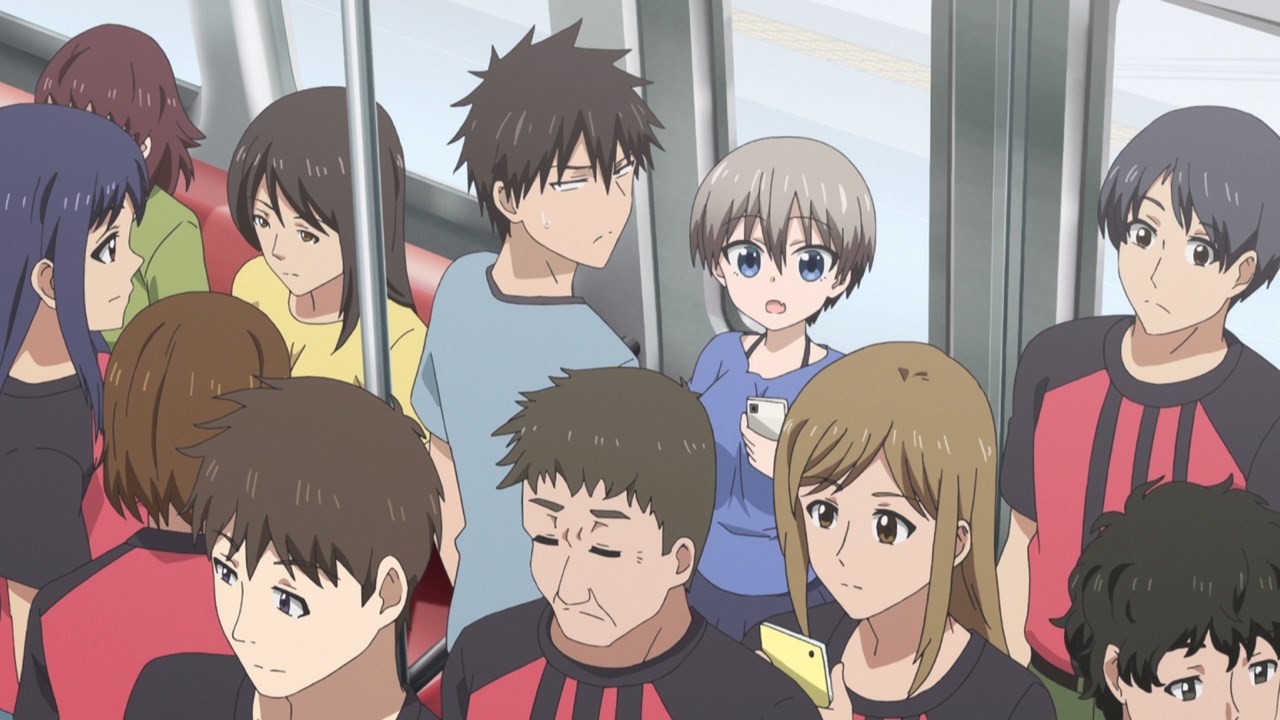 After visiting the optical wear shop, they took a train ride as Sakurai and Uzaki headed home. Unfortunately, the train car is getting a bit packed with passengers where this could be a problem with Shinichi. 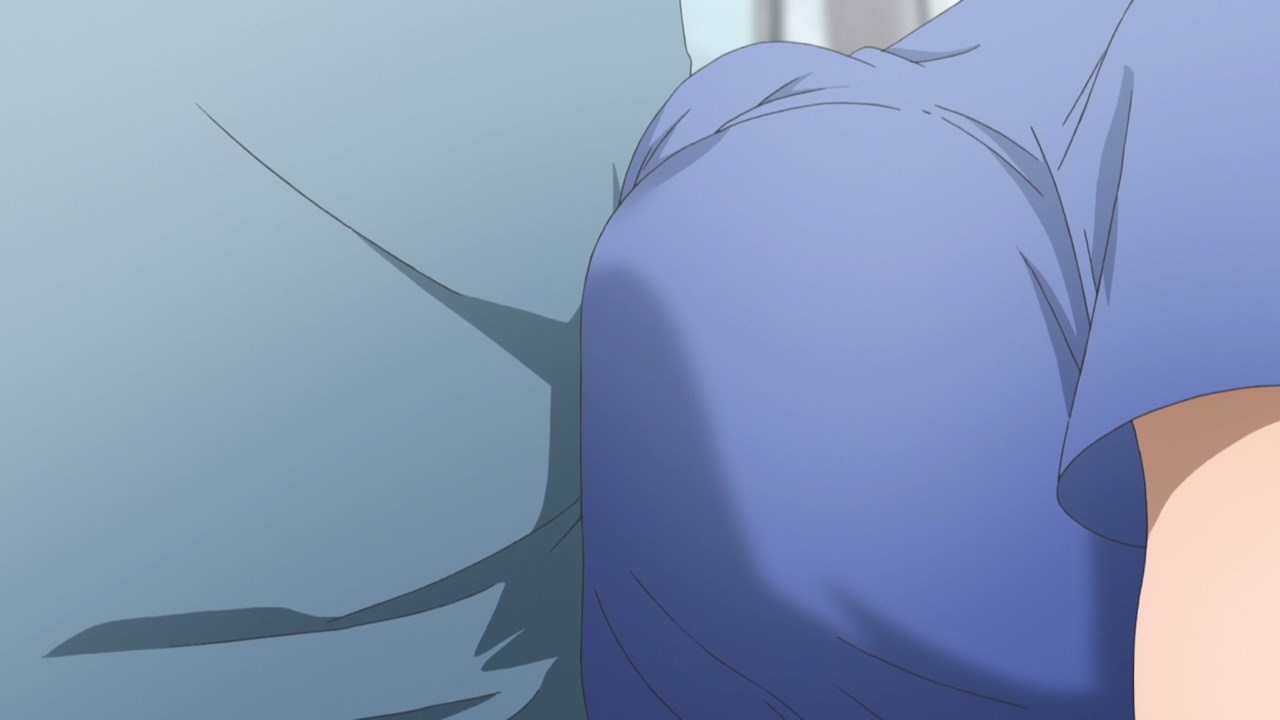 You see, Hana’s big knockers are pressing towards his chest. Oh boy, I have a feeling that Shinichi couldn’t hold his penis anymore because of how soft her tits are! 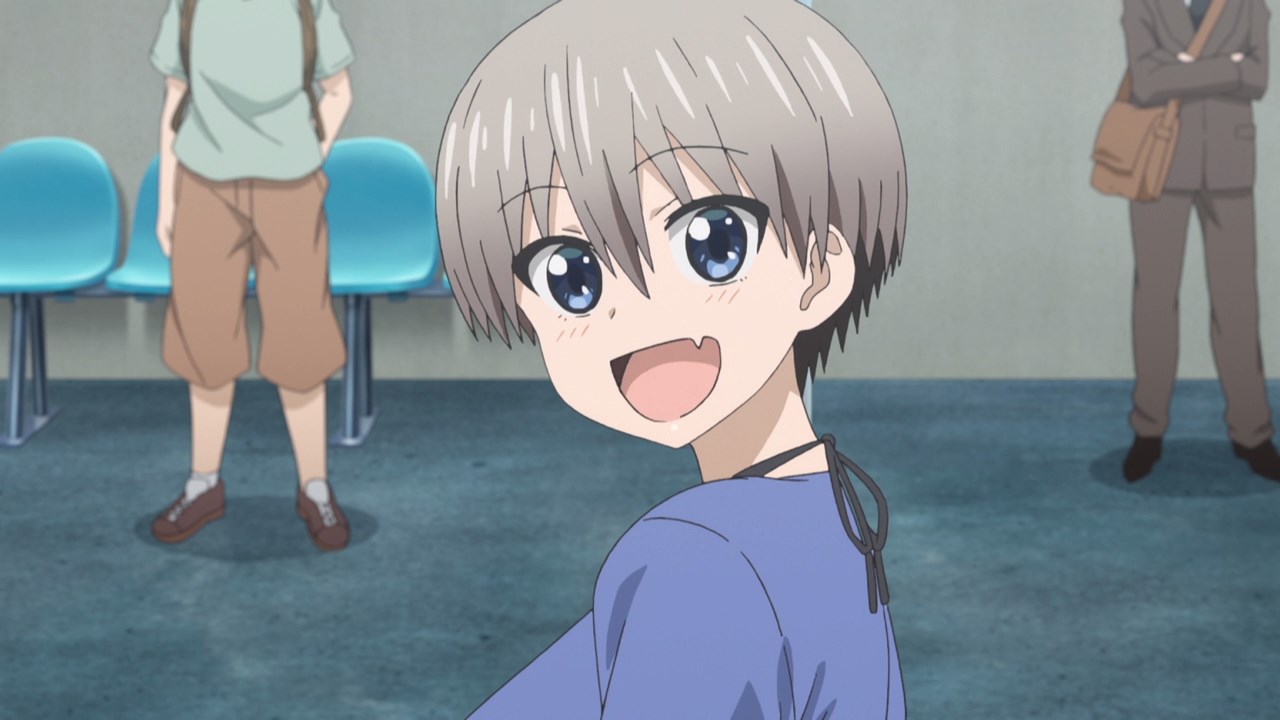 Fortunately, they finally arrived at their destination as Hana Uzaki goes off first. Now then, what happened to Shinichi Sakurai? 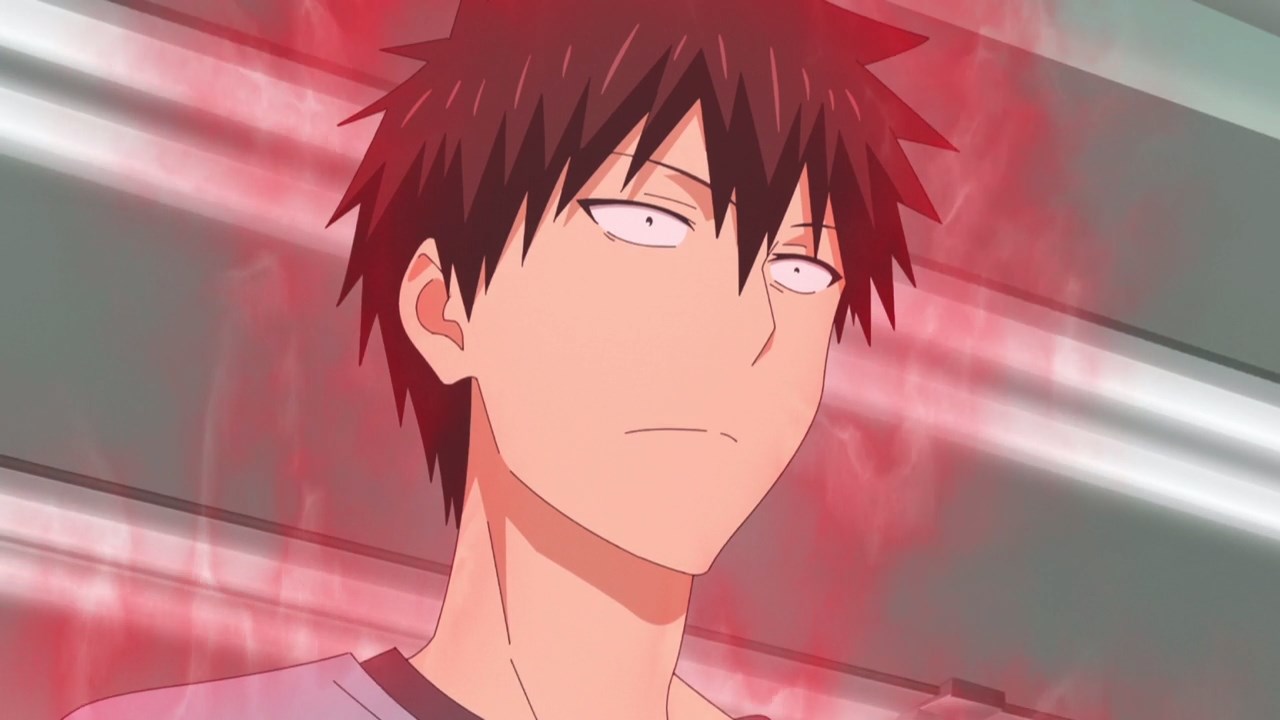 Oh, he just stand there as Sakurai’s spirit has finally left from his body. Oh please, I don’t want him to die just yet! 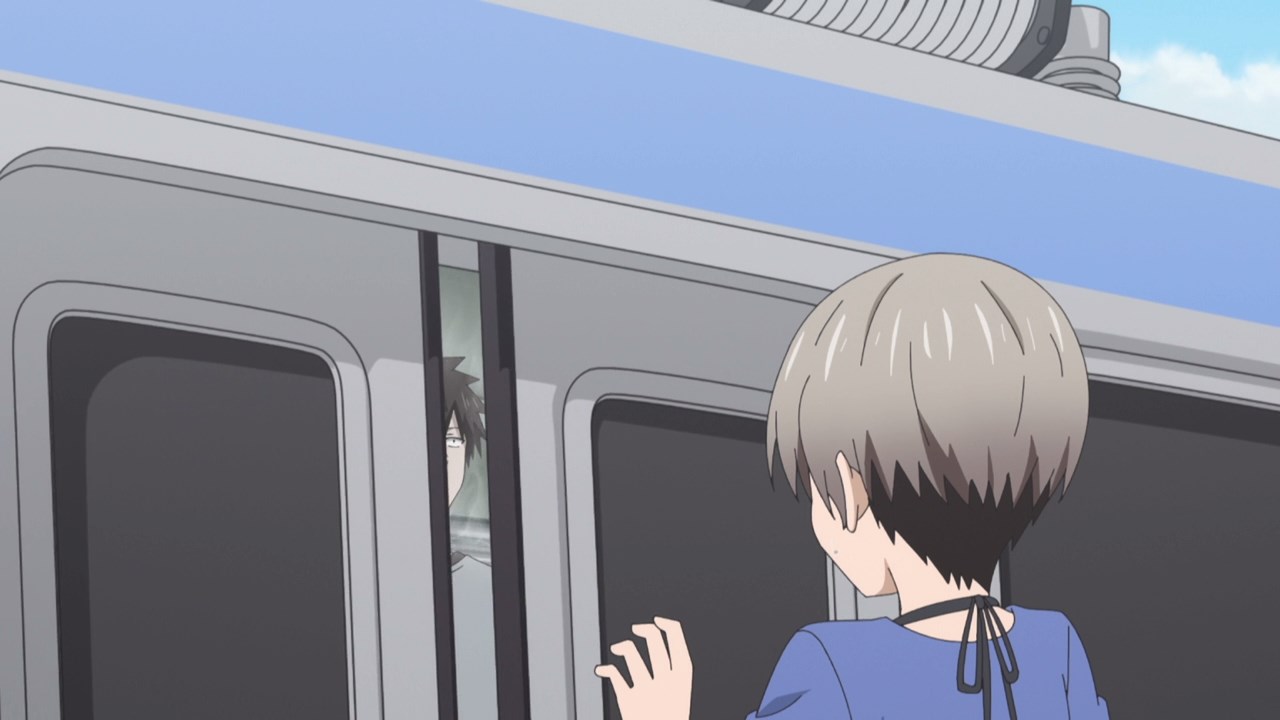 Also, Shinichi didn’t get out of the train as the doors are gonna closed.

Well then, that’s very unfortunate for Sakurai but you know what, I think he’ll be okay… except that Shinichi will need to find a ride back to Tokyo! 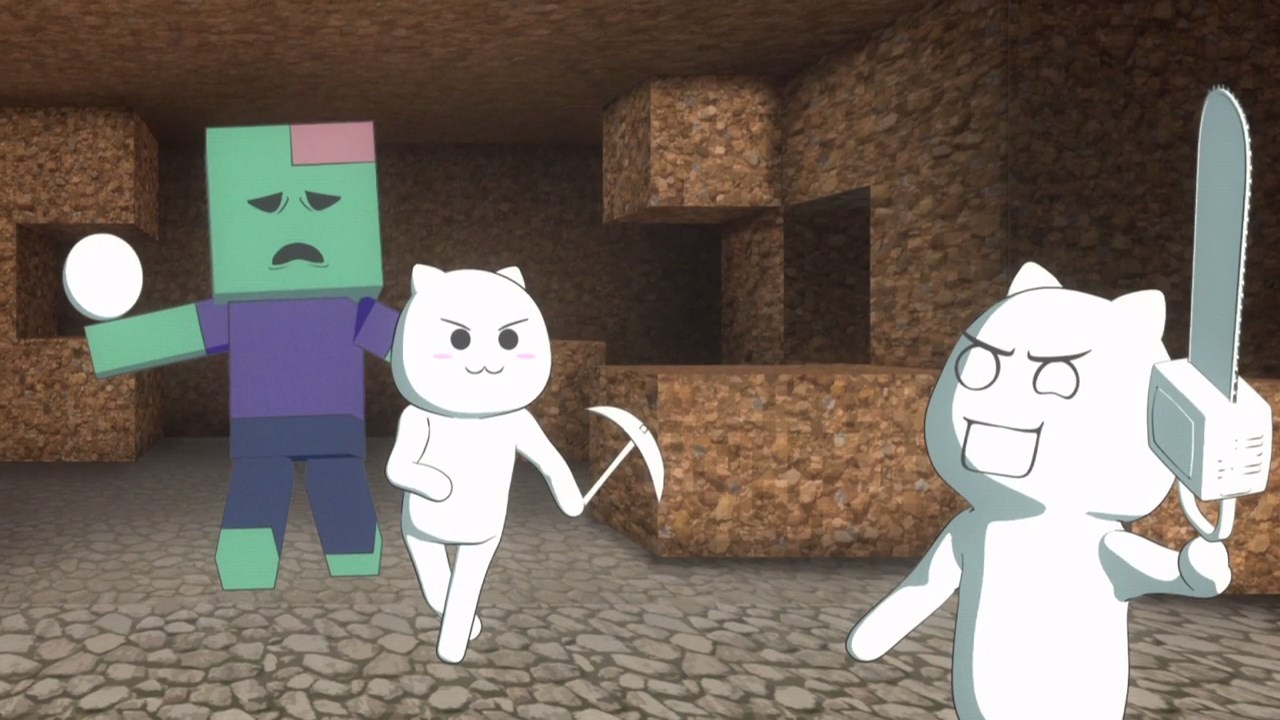 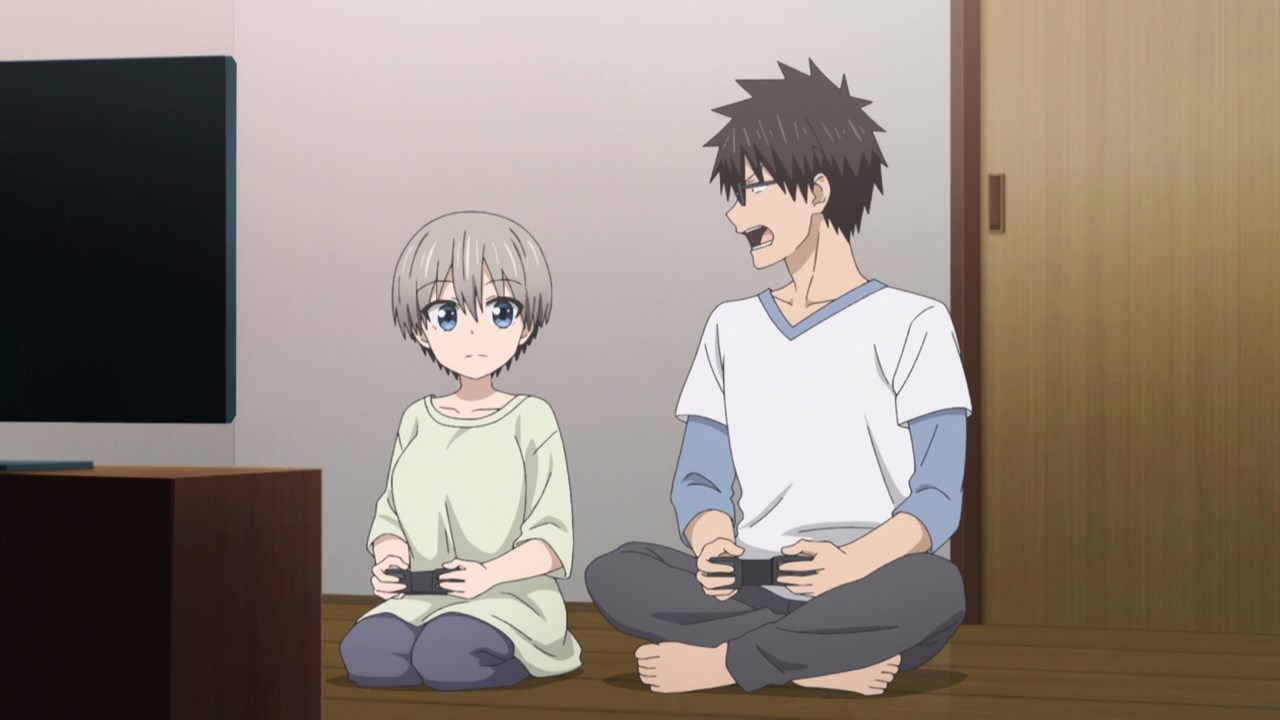 Anyways, let’s end this episode where Hana Uzaki stayed at Shinichi’s apartment to play games of course. Wait a minute, that game looks similar to Minecraft except that it’s filled with cats!

Also, looks like Shinichi Sakurai managed to buy a pair of glasses, meaning that he won’t get any eye strain when staring at the TV screen for longer periods. 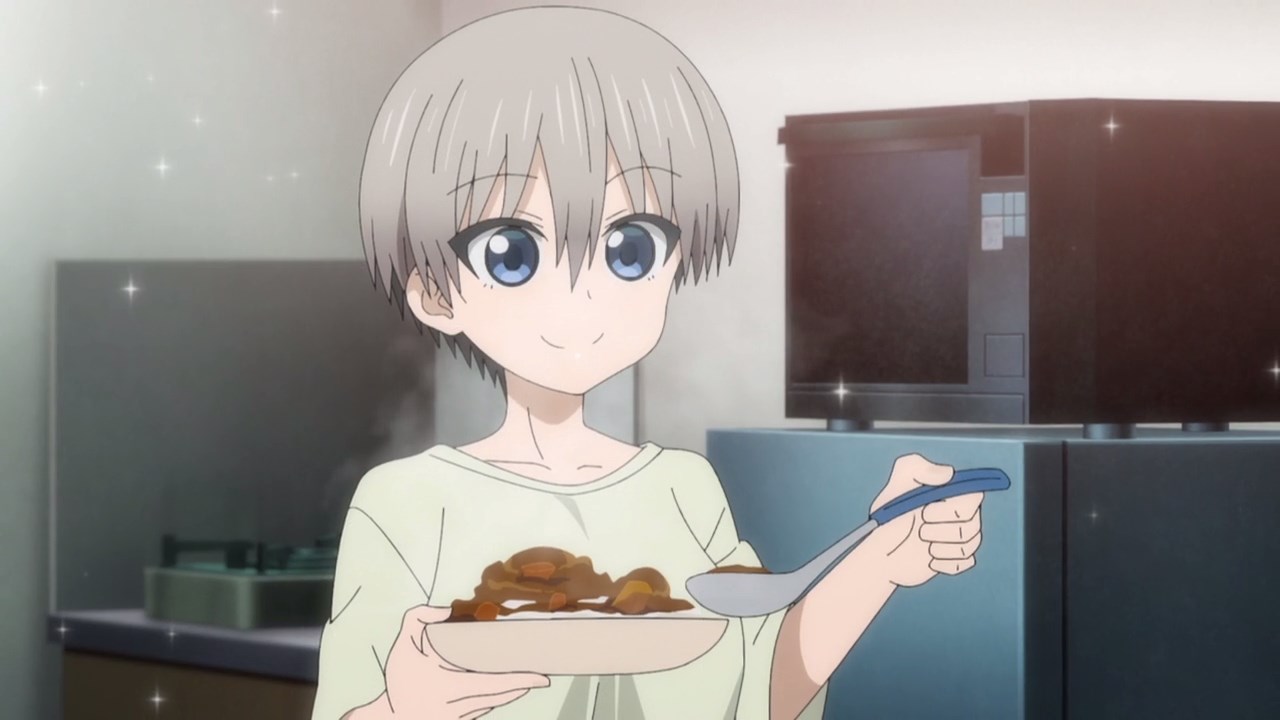 Oh yeah, Uzaki-chan made some beef curry as she’s worried about Sakurai-sempai’s health where he either eat junk food or Shinichi eats less. 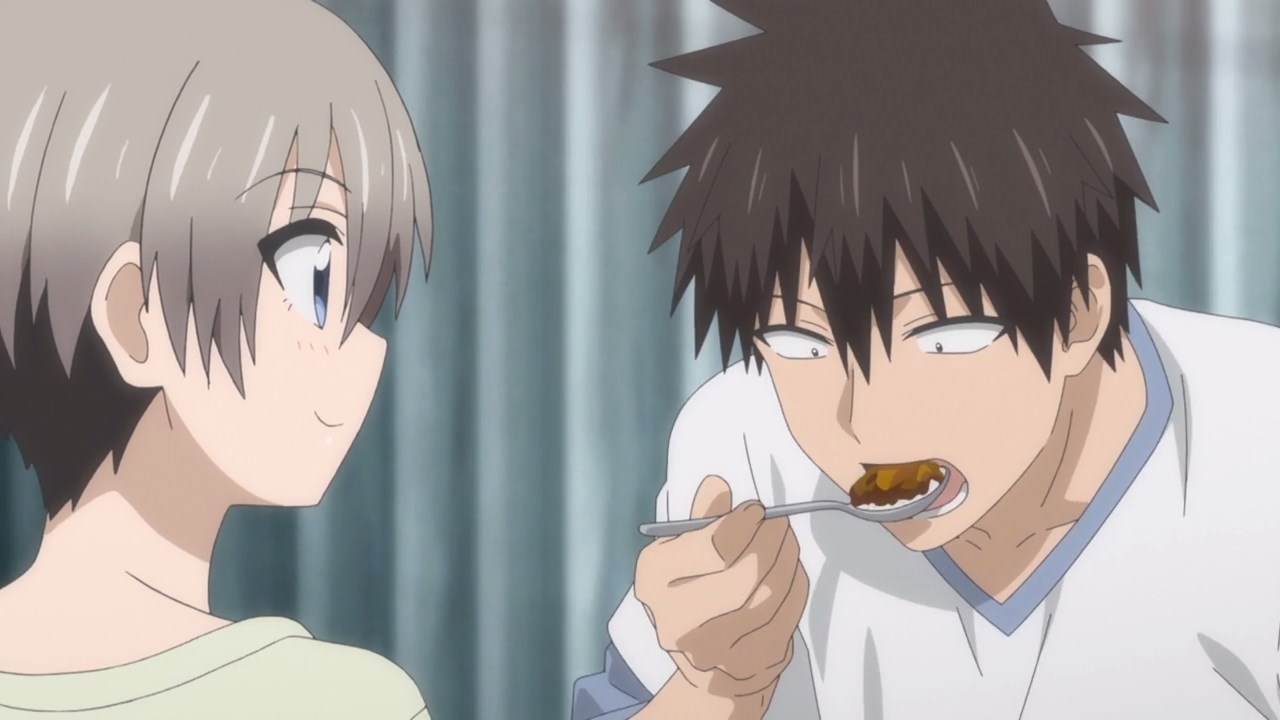 Regardless, I have to say that Sakurai is lucky to have a reliable underclasswoman like Uzaki-chan. But still, Shinichi sees her as annoying.