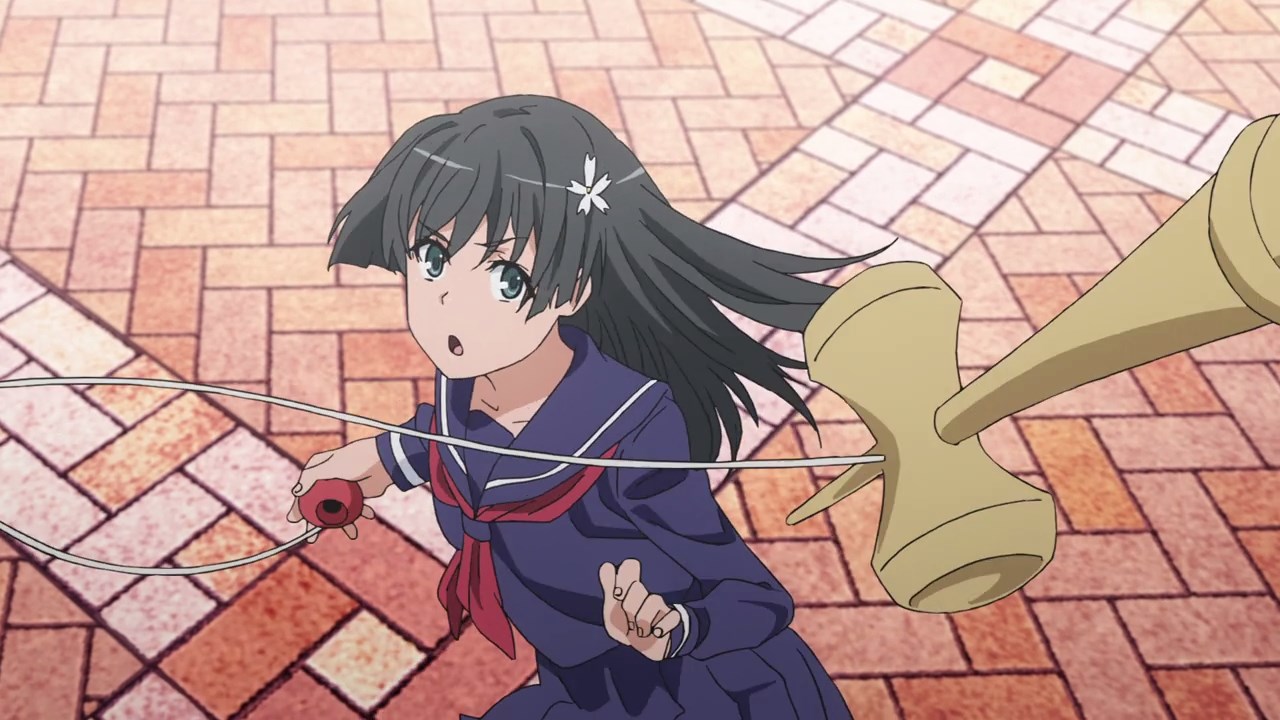 Hey everyone, it’s Ruiko Saten where she’ll show you some wicked kendama tricks that you’ll be blown away! 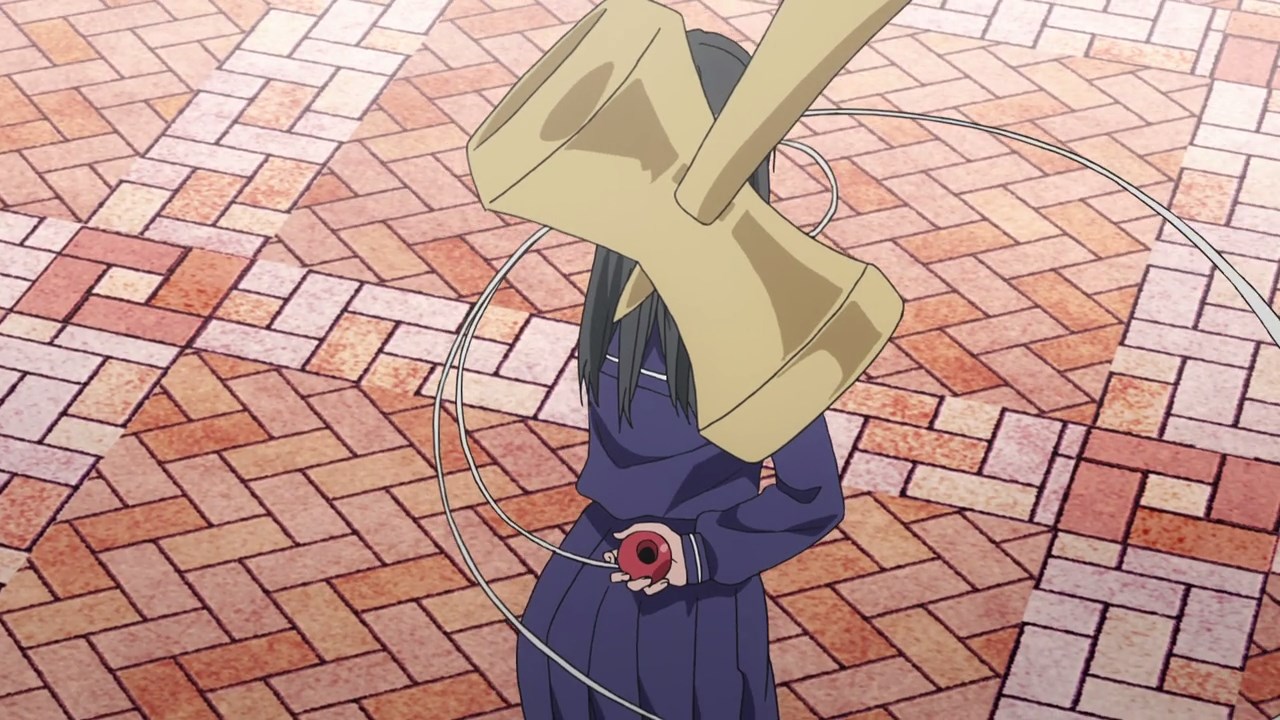 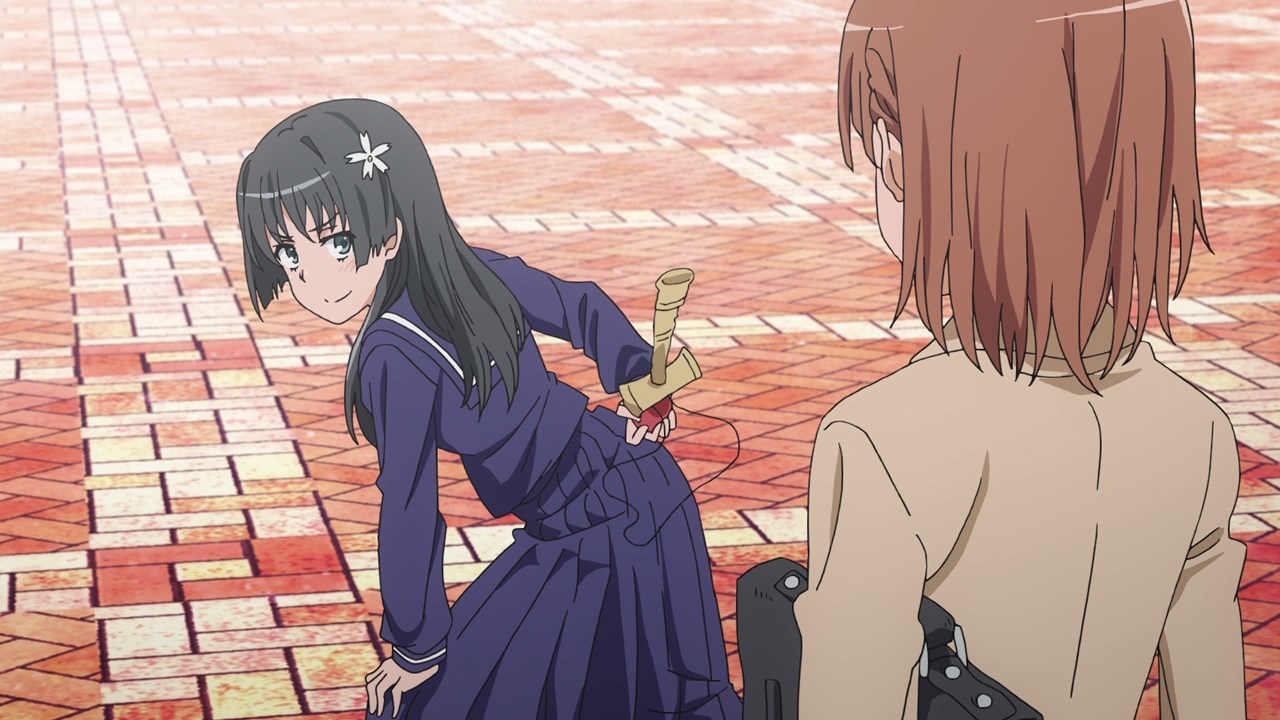 As you can see, Saten grabbed the ball and swing it around until the spike of the handle landed towards the hole of the ball. Yeah, I’m truly stunned by Ruiko’s tricks!

Oh and her secret for performing that trick? She got a certain dream card from a trader and acquired it overnight. Well that’s nice for Saten but I don’t know if her ability will remain after using that dream card.

Meanwhile, here’s Saiai Kinuhata where she’s having some angst when it comes to bust size because her fellow ITEM members have big breasts.

This includes Frenda Seivelun where her tits are big and has the potential to get bigger. Not sure if she’ll reach D or E cup in the future… 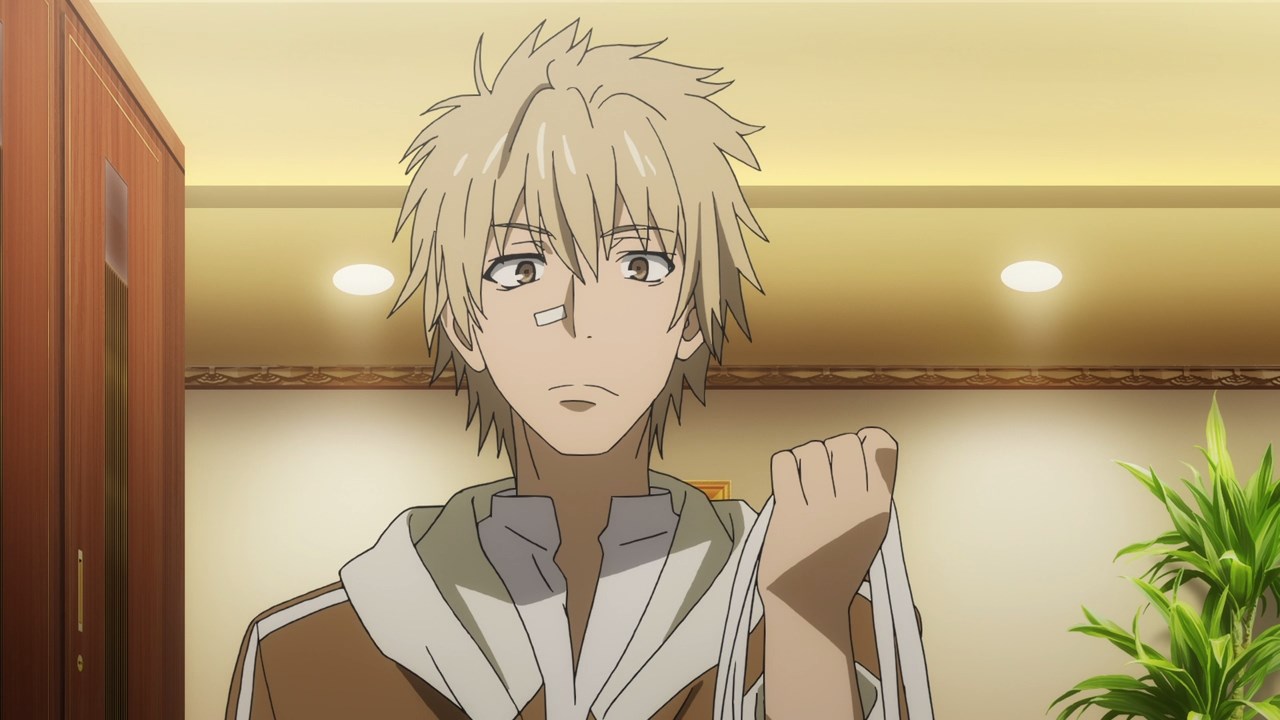 Oh yeah, ITEM recruited a certain punk named Shiage Hamazura where he acts as the errand boy to various tasks, ranging from buying food from a convenience store to driving vehicles. 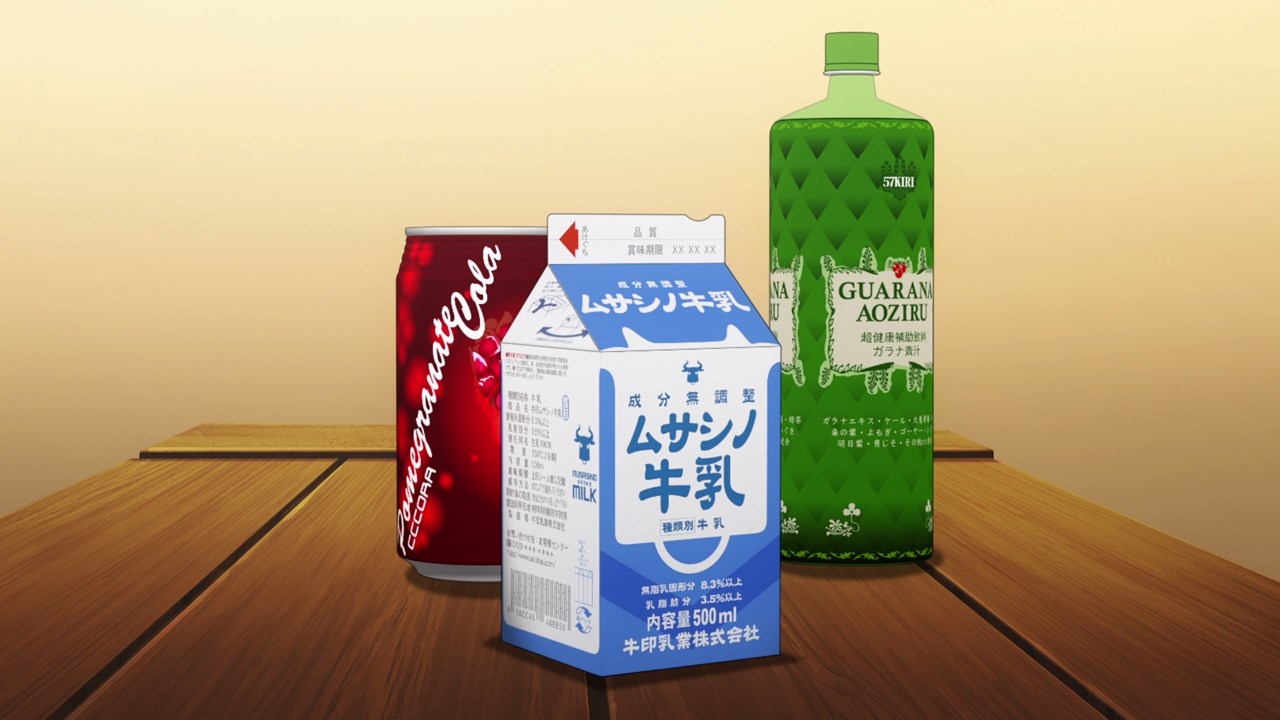 With that said, Hamazura bought some drinks to Kinuhata, but Saiai will have to choose if she wants to drink a can of cola, a bottle of energy drink, or a carton of milk. 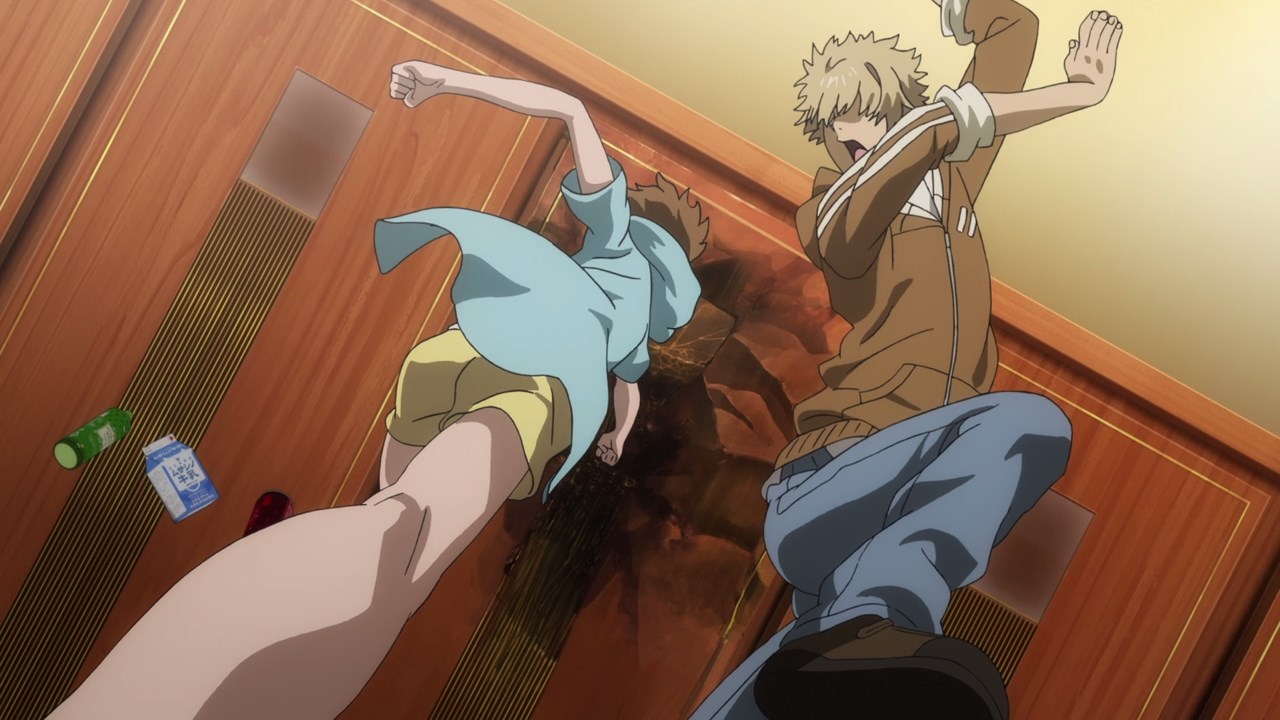 Unfortunately, Saiai skips the milk as she throws a punch to Shiage for mocking her chest. Um Kinuhata, milk is good for your height and breast growth. 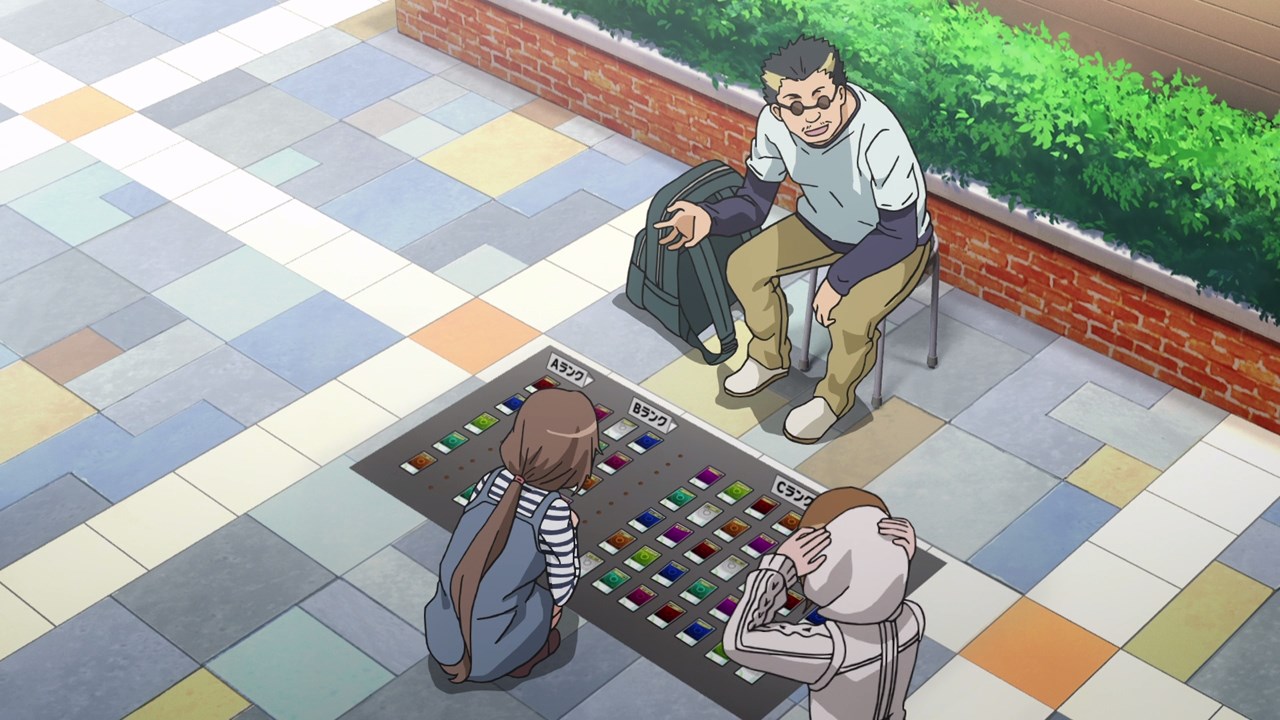 Anyways, Kinuhata went outside to get some fresh air until she stumbled upon an Indian Poker trader where he sells dream cards based on their rank. Hmm, I wonder if this is legal to sell cards in Academy City? 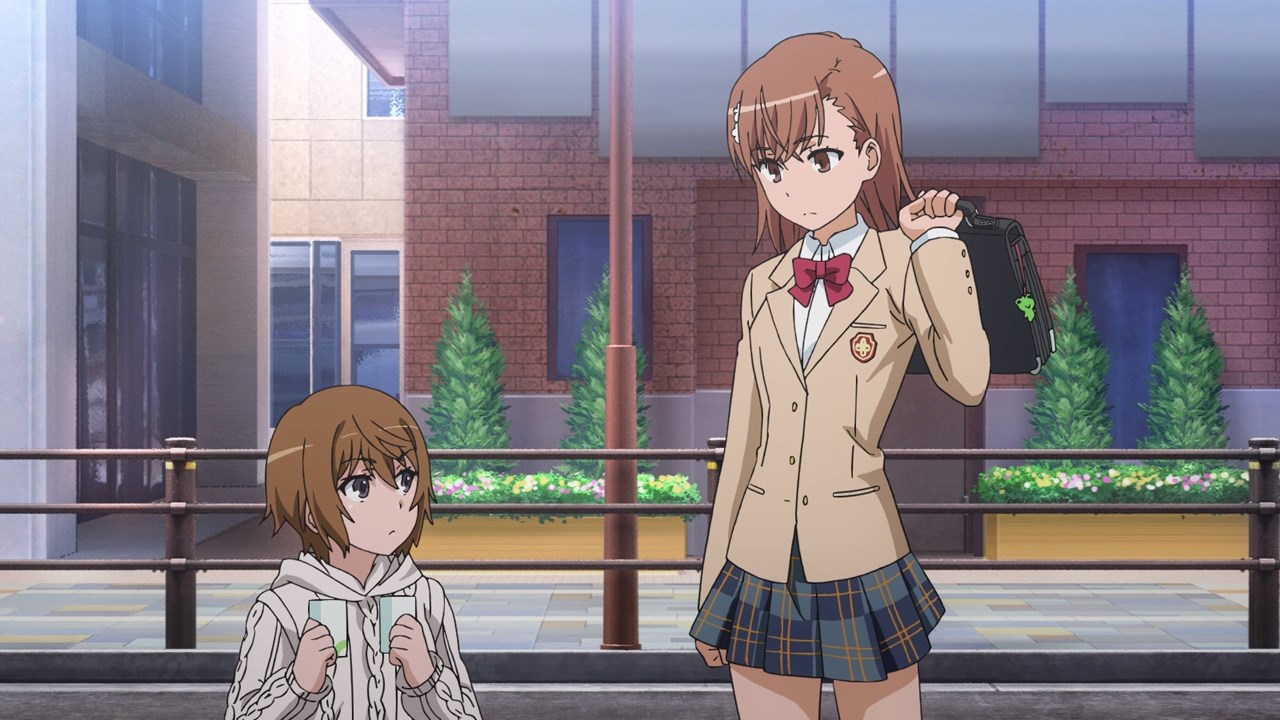 On the other hand, she stumbled upon Mikoto Misaka and while Saiai Kinuhata knows that she’s ultra-troublesome esper, the only thing I’m curious is whether Misaka remembered the time she encountered Kinuhata during the MISAKA Sisters Arc?

Regardless, they’re here to buy some dream cards but then again, Saiai and Mikoto might skip it because some of them are garbage. 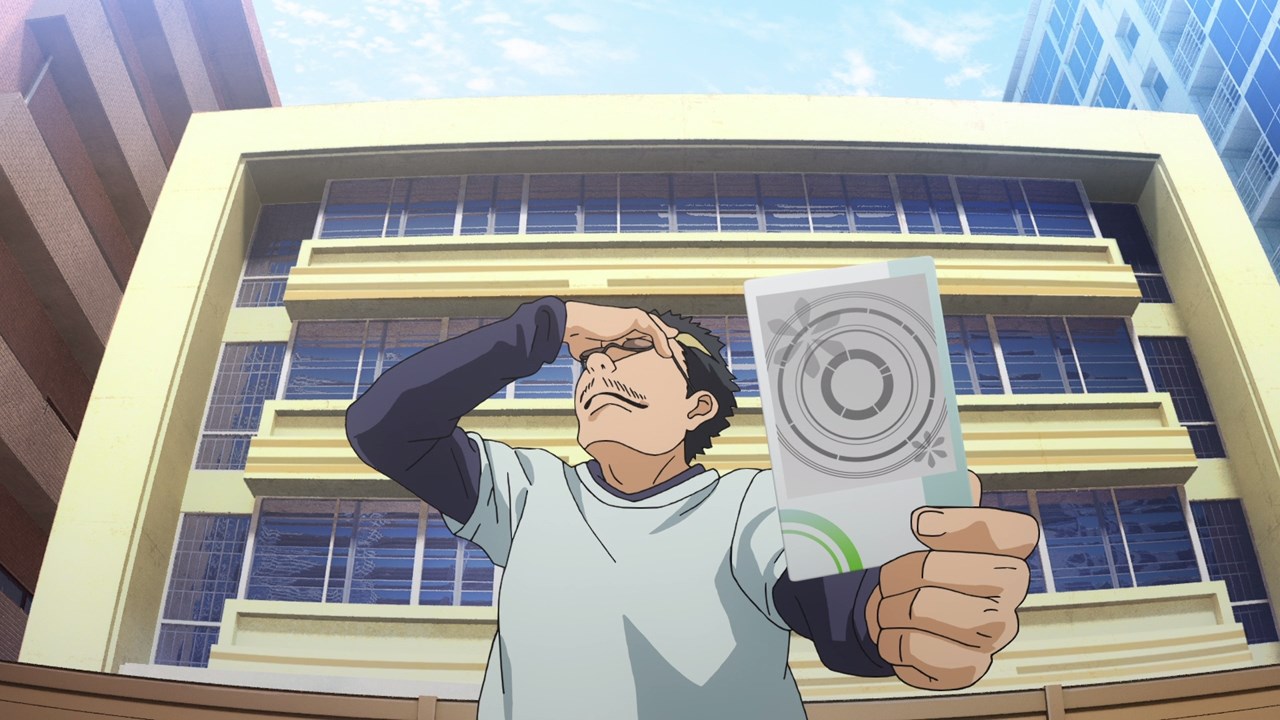 That’s until the trader pulls one rare S-rank card which it contains a dream of a certain scientist who’ll help any girl on growing their breasts. This is called Bust Upper! 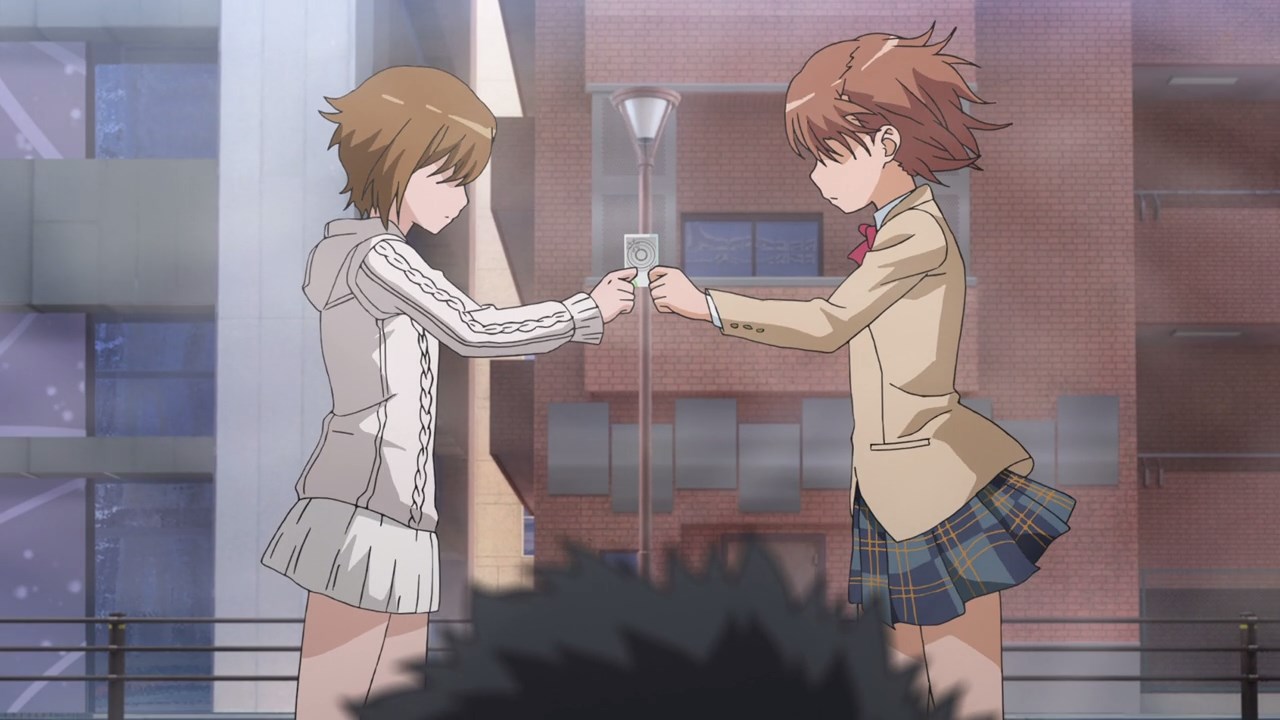 And lo and behold as both Kinuhata and Misaka are fighting over the Bust Upper card. Um girls, don’t pull it so hard or the card might tear it apart. 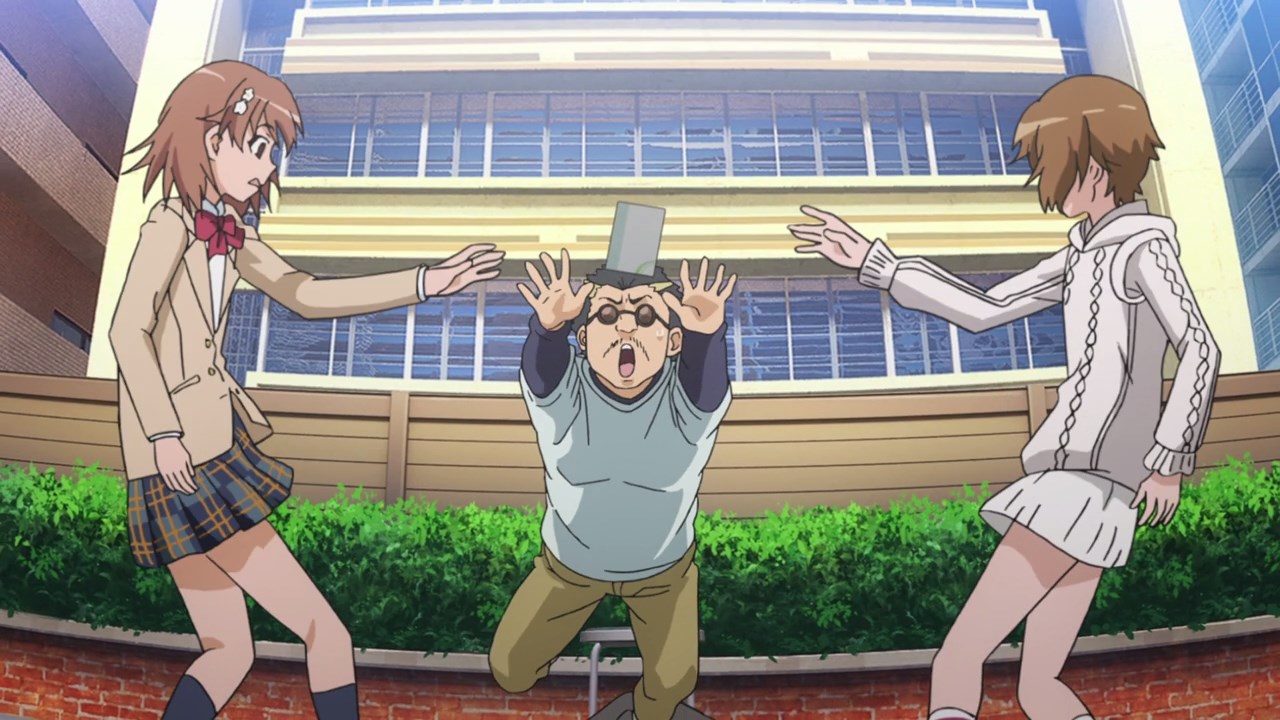 Heck, even the trader told the girls to stop destroying the S-rank card as he steps in to get it, although he might ruin the stall as the trader falls towards the pavement. 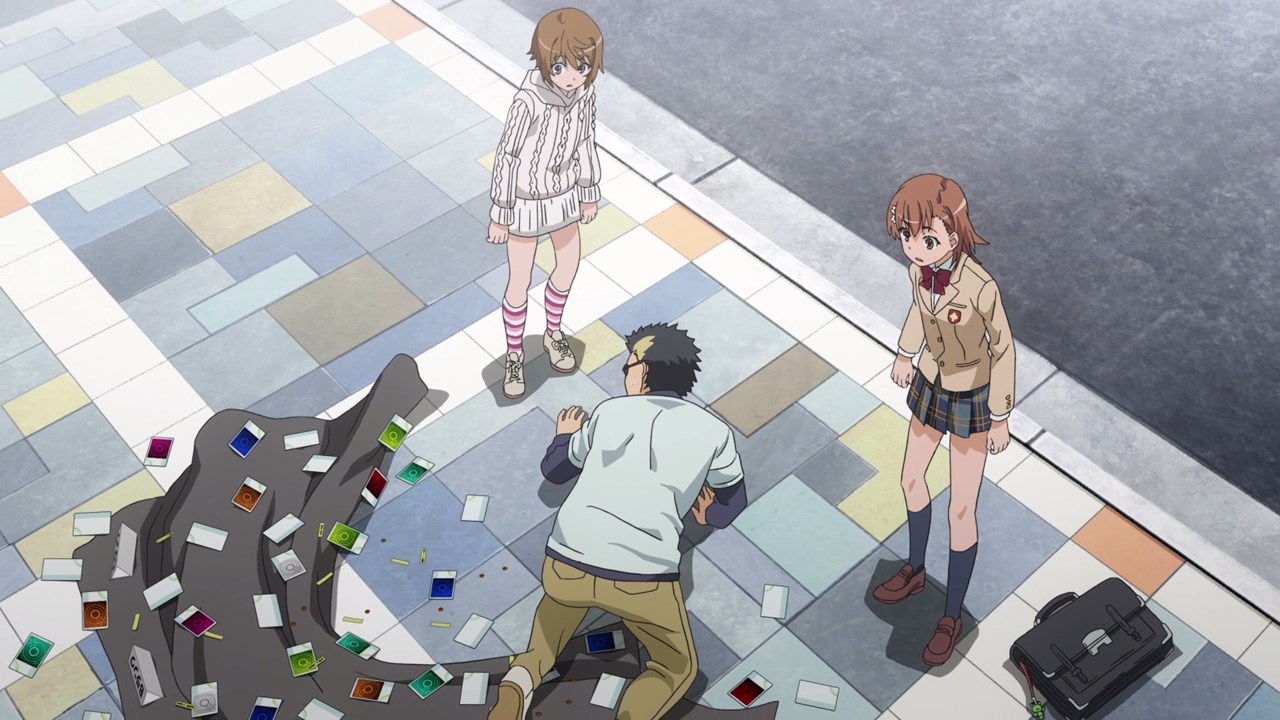 And thus we got cards being scattered around the floor as the trader can’t tell which card is the rarest one. Would it be better if he put a label on every card?

In any case, Mikoto and Saiai decided to buy all of them because it’s their fault for causing a ruckus in the first place. 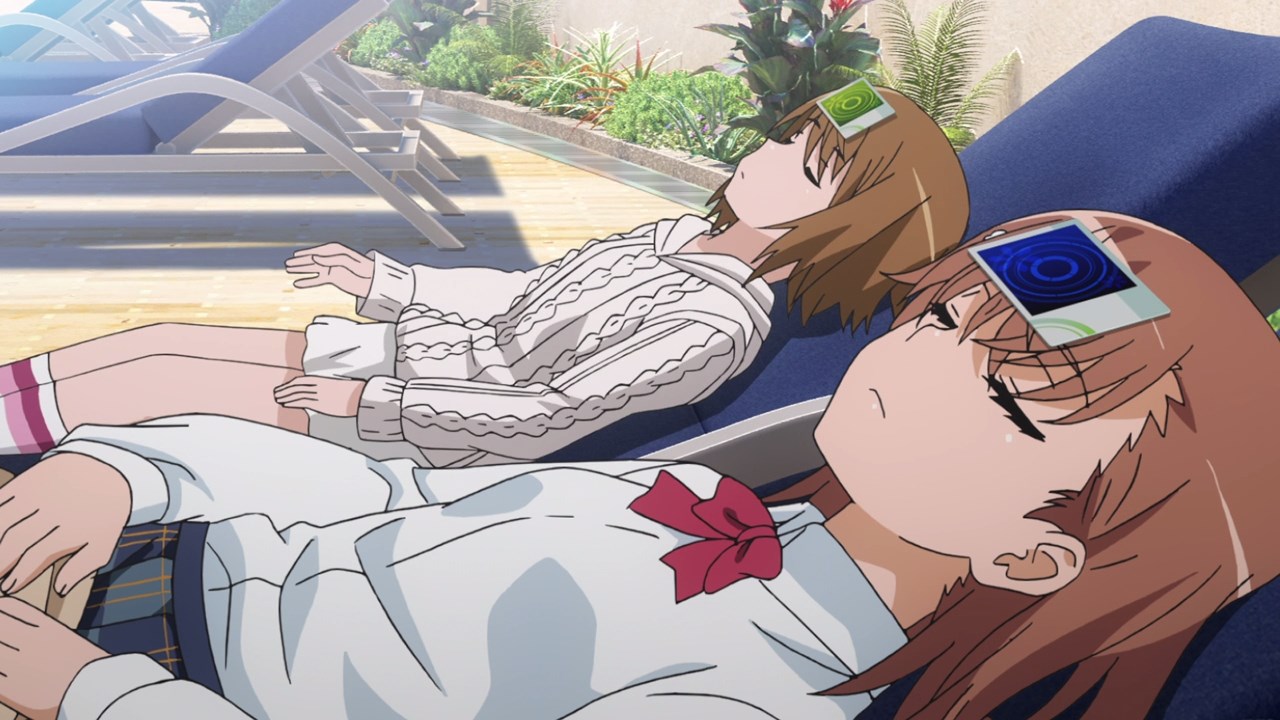 Then again, we’ll never know which card can grow breasts as they went to the swimming pool and place their card on their forehead to find out if either Kinuhata or Misaka got the jackpot. 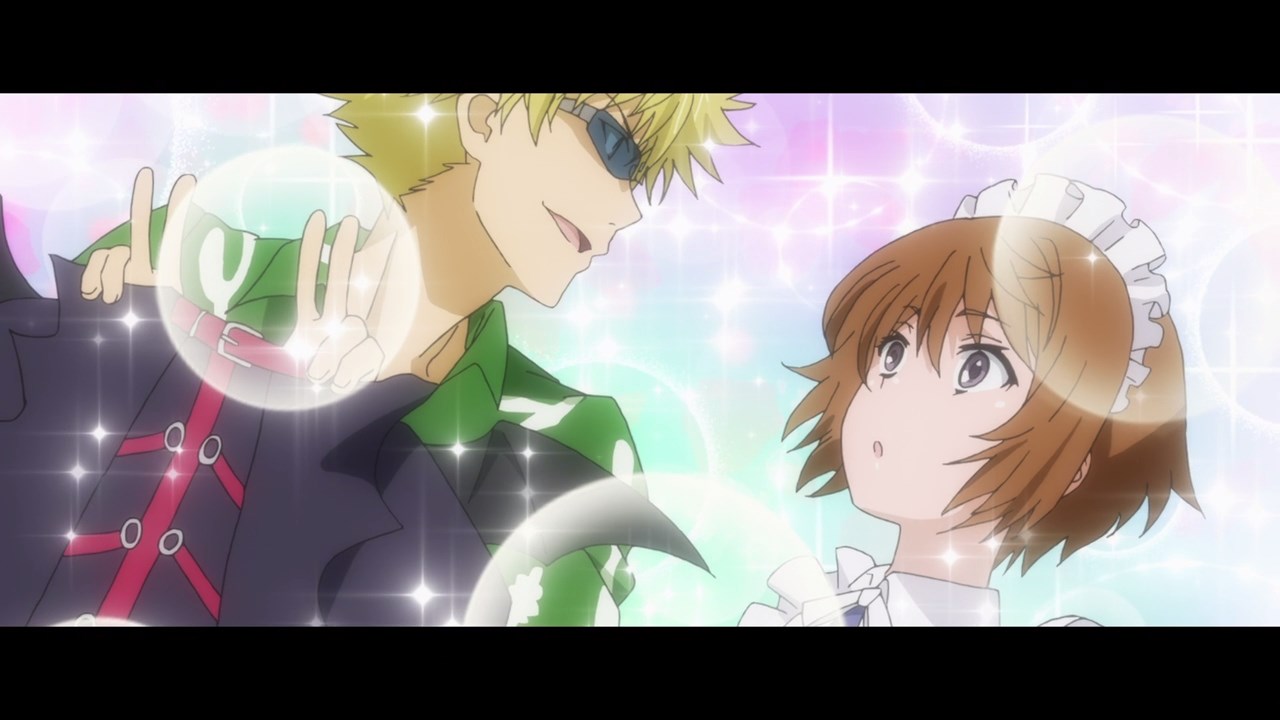 Unfortunately, it’s gonna be a long sleepy afternoon for both girls where they get various dreams, like this one from Motoharu Tsuchimikado where he loves to dress up girls much to Saiai Kinuhata’s annoyance.

Dammit Tsuchimikado, have you decided to participate in this Indian Poker thanks to Aogami-kun? 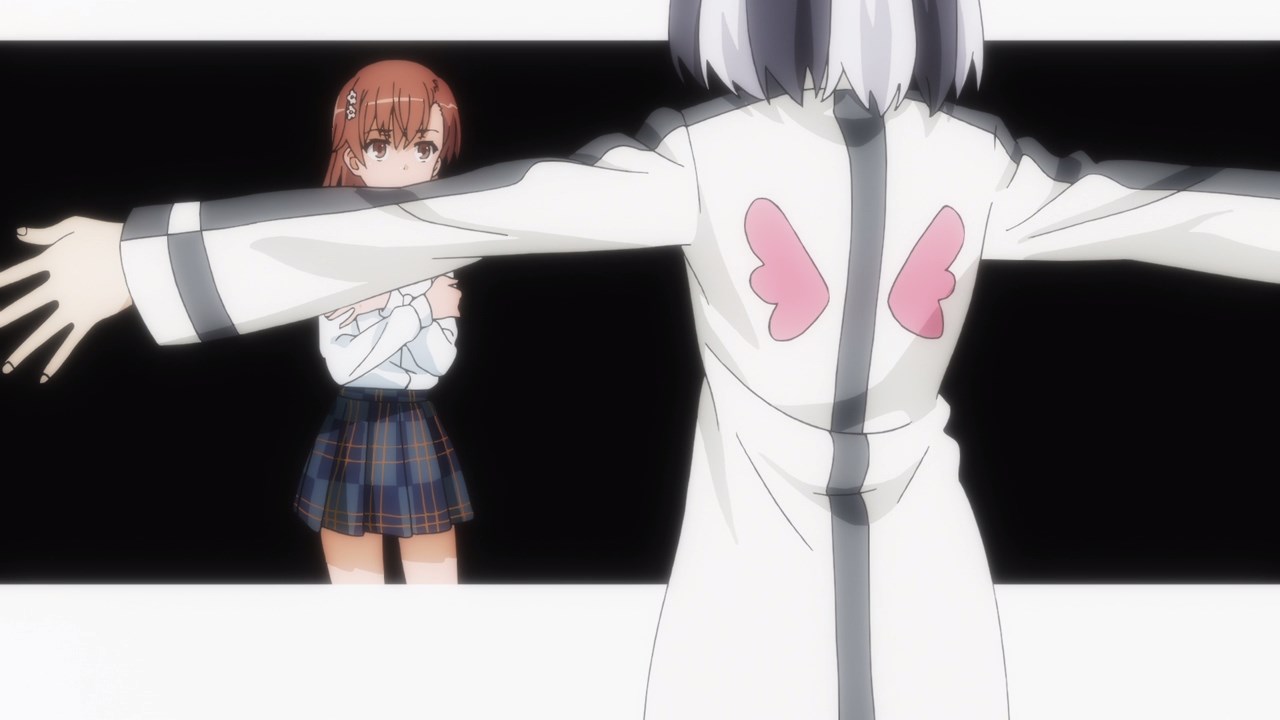 As for Mikoto Misaka, it appears that her dream revolves around a certain scientist who said that she can do body modifications, including breast augmentation. 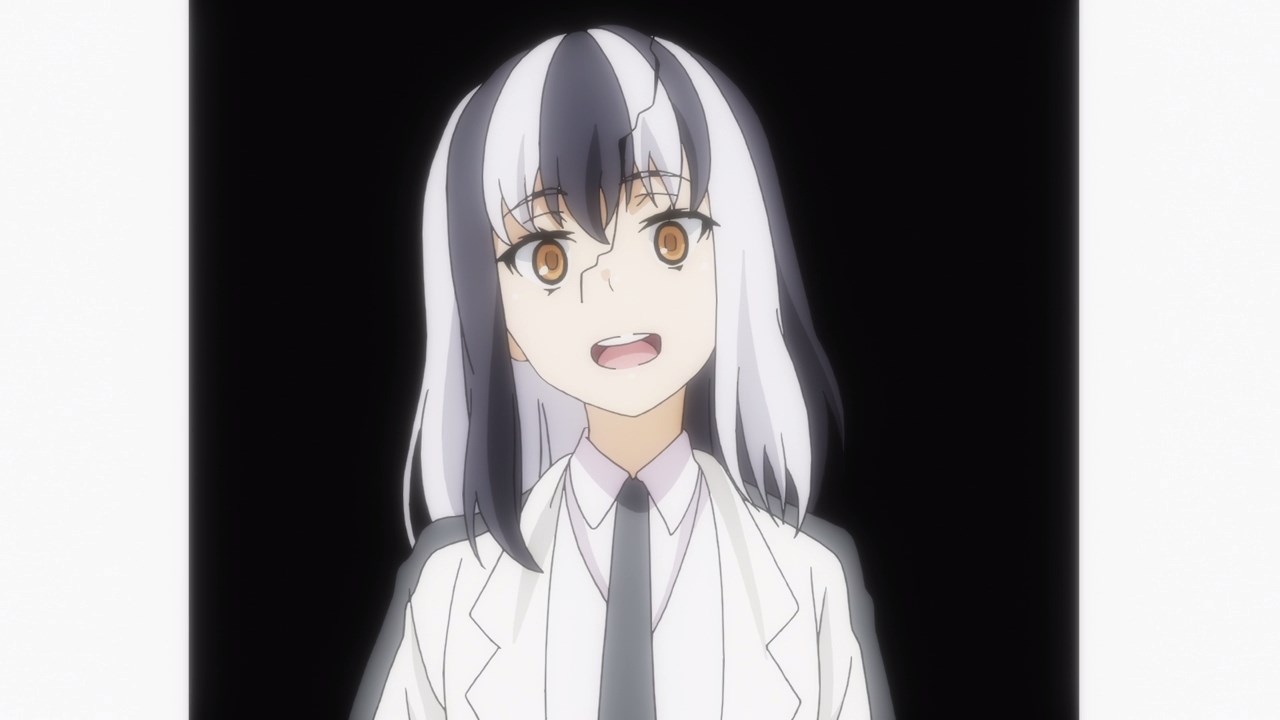 Then again, I have a feeling that she’s just joking around but you know what, I feel that this scientist will show up later.

Also, the fact that her face has cracks is very unsettling to me! 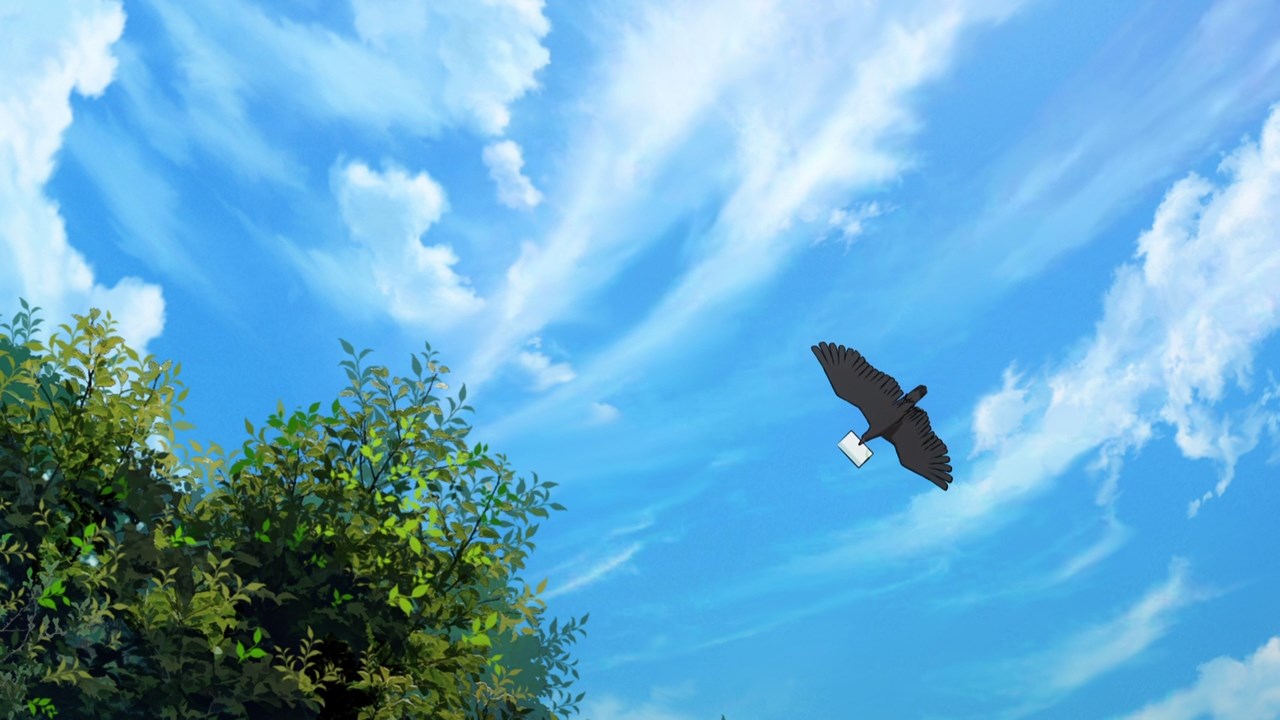 Meanwhile, it appears that a crow has snagged a card and flies away. Oh please I hope it didn’t get that Bust Upper car. 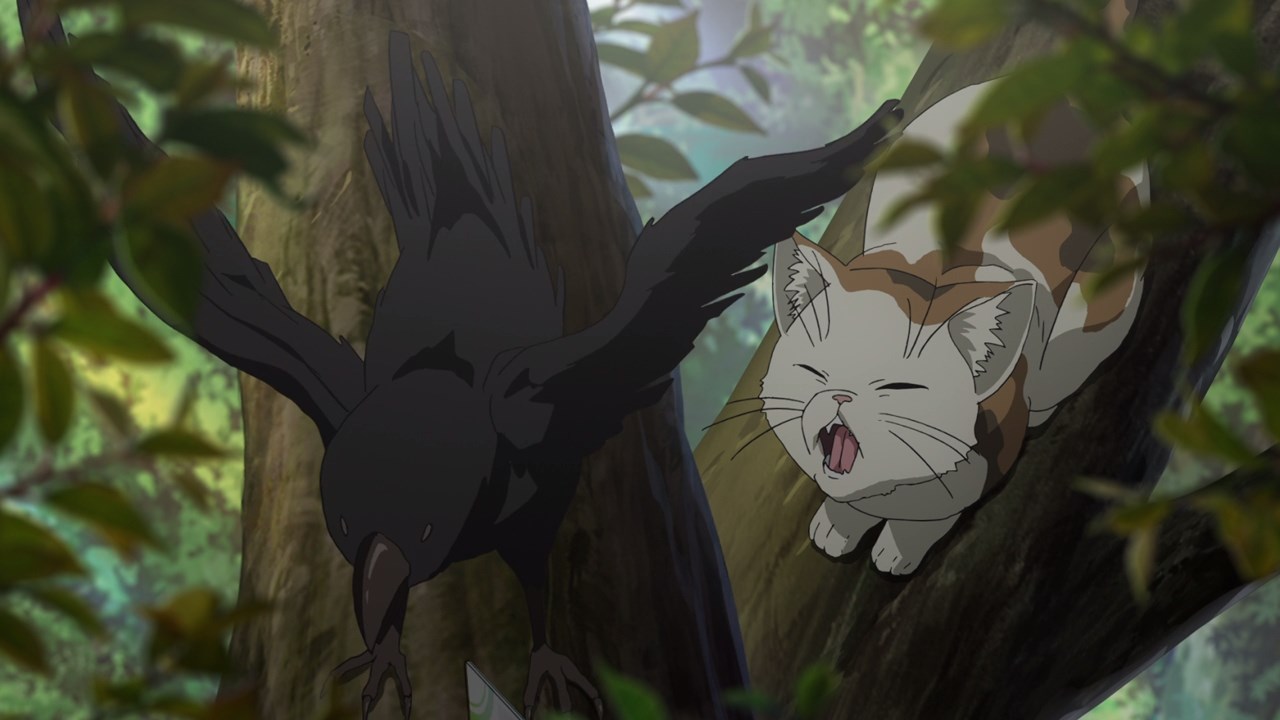 Unfortunately, that crow got startled by a cat in which it drop the card. 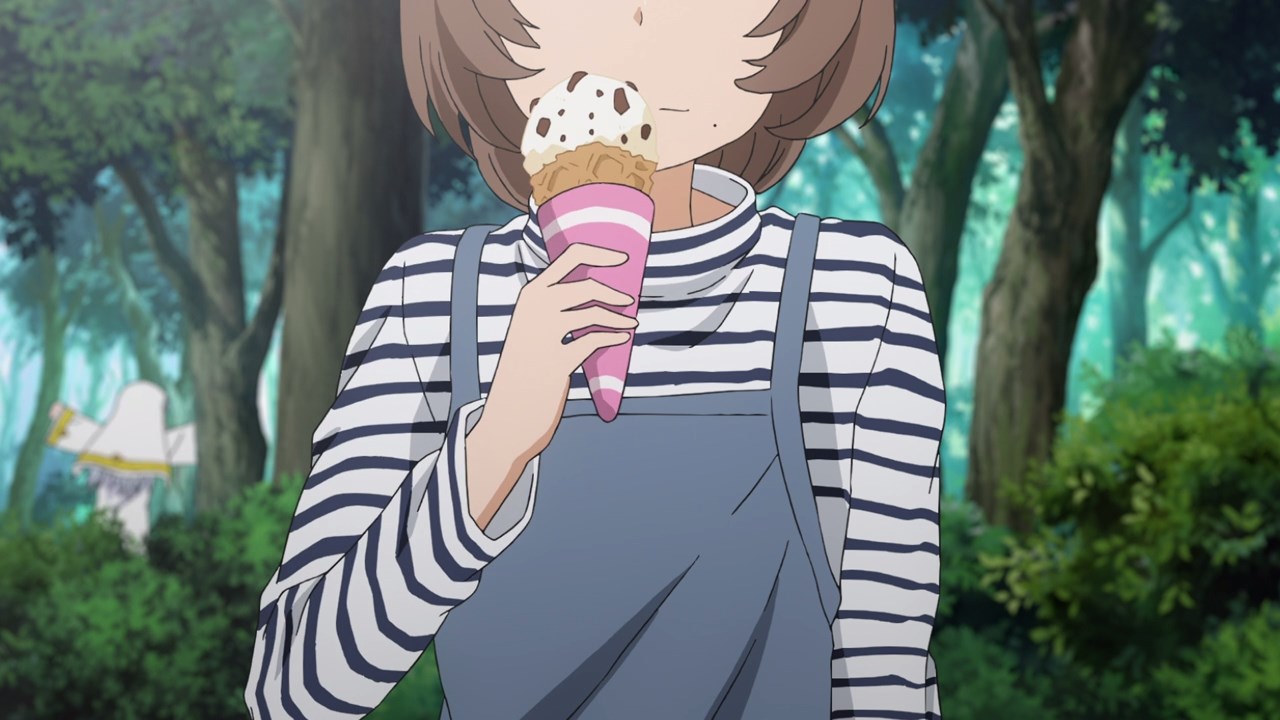 By the way, I would like to point out that this girl went to the trader earlier to buy some Indian Poker cards and- Wait, isn’t that Index running at the background? 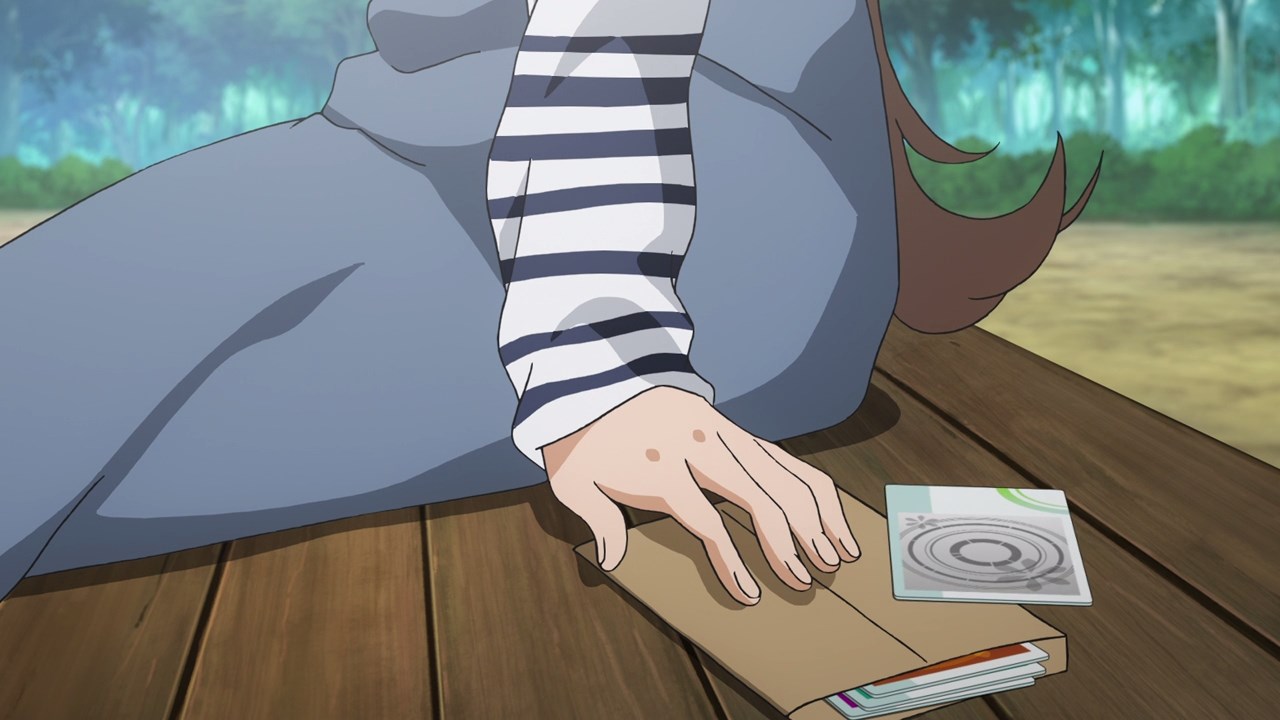 On the other hand, that girl stumbled upon a card that was dropped by the crow. Then again, we’ll know if card is a bogus or not. 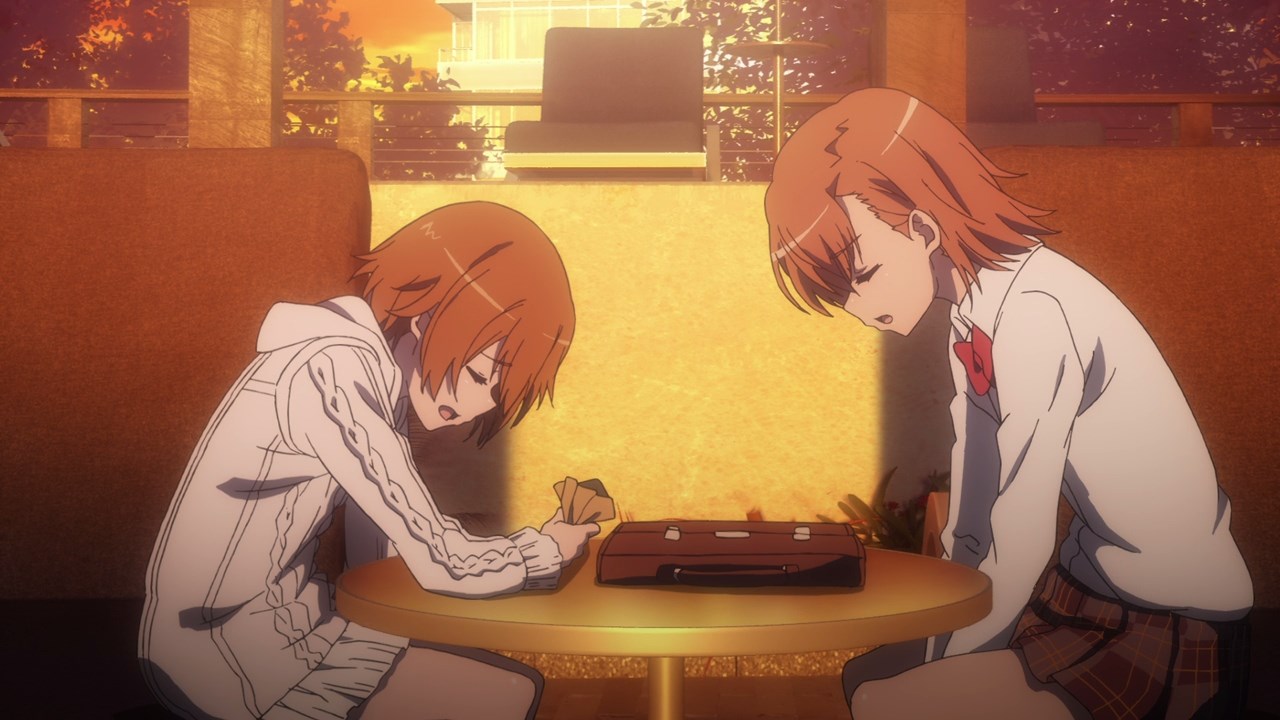 In the end though, both Saiai Kinuhata and Mikoto Misaka call it a truce as they failed to get the Bust Upper card. Blame it to that bird for stealing the card! 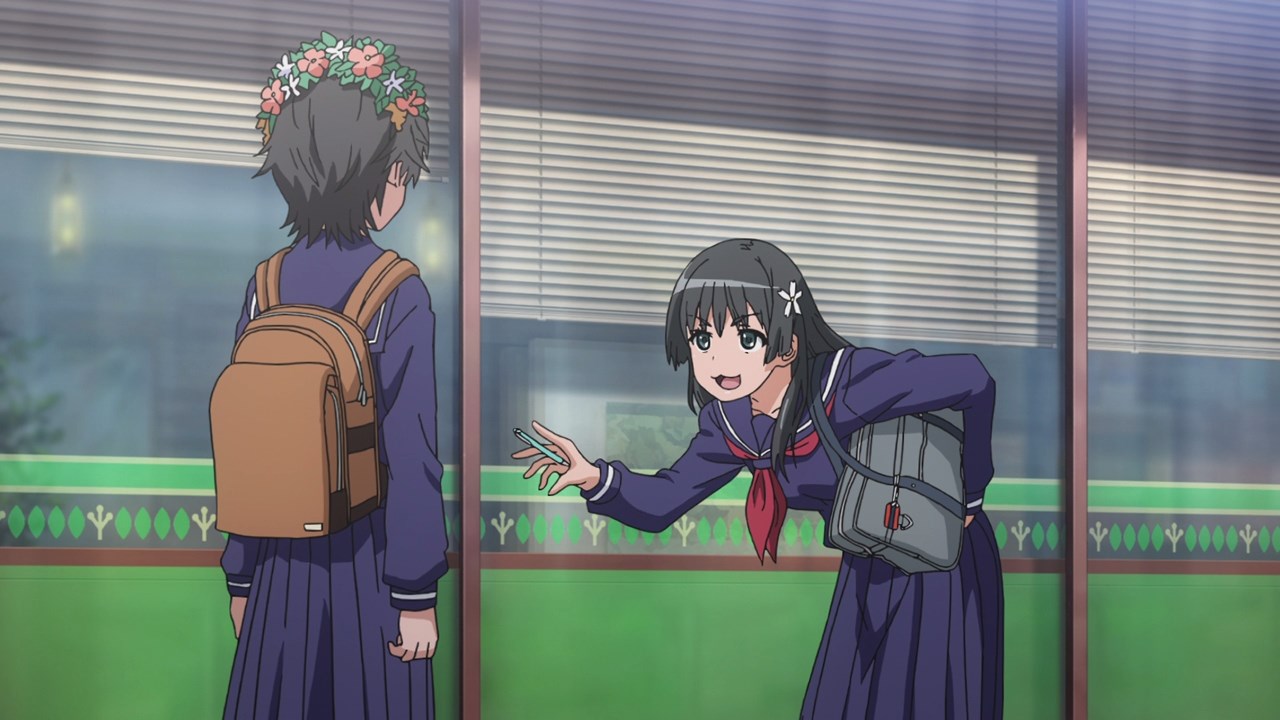 One last thing, looks like Ruiko Saten is spinning a pen like a pro thanks to a dream card that she got from a trader.

Um Saten, it’s easy for anyone to spin their pen like a baton and by the way, do you still know how to perform kendama tricks after showing it to Misaka? 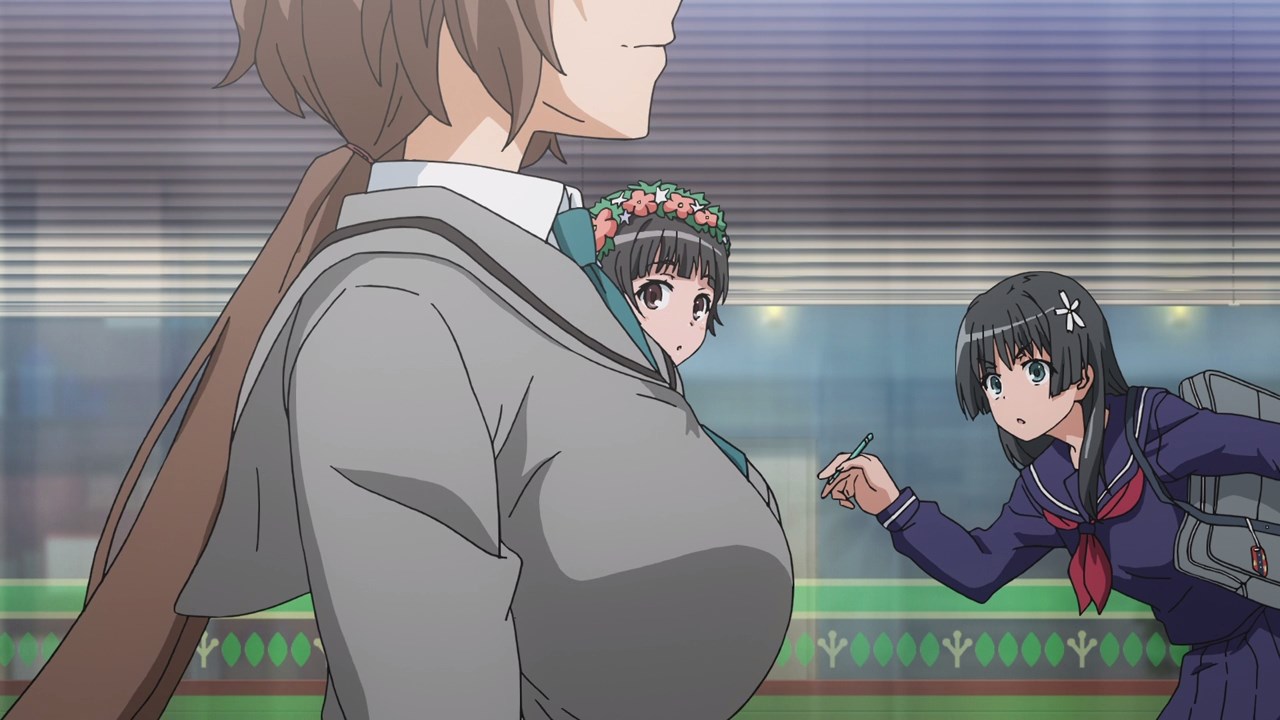 On the other hand, Ruiko Saten and Kazari Uiharu looked at the girl who passed by and has big knockers. Wait, don’t tell me that she got the Bust Upper card? Please don’t make it permanent, it’s all just a dream!

Anyways, I’ll see you next time and let’s hope that the scientist will show up soon as I want answers regarding the Indian Poker cards.