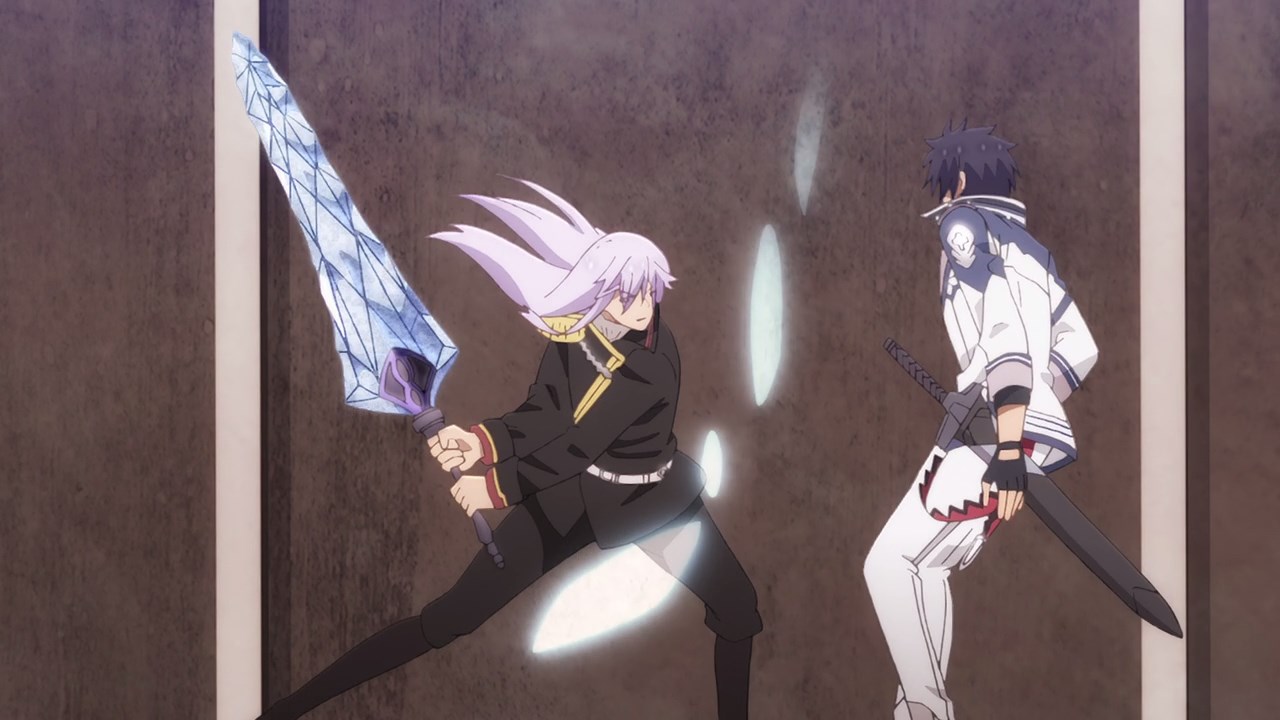 Well everyone, it’s time for Anos Voldigoad to finish his first match against Krut Ludowell in under a minute, although Anos wants to play with the current champion until Krut loses his composure. 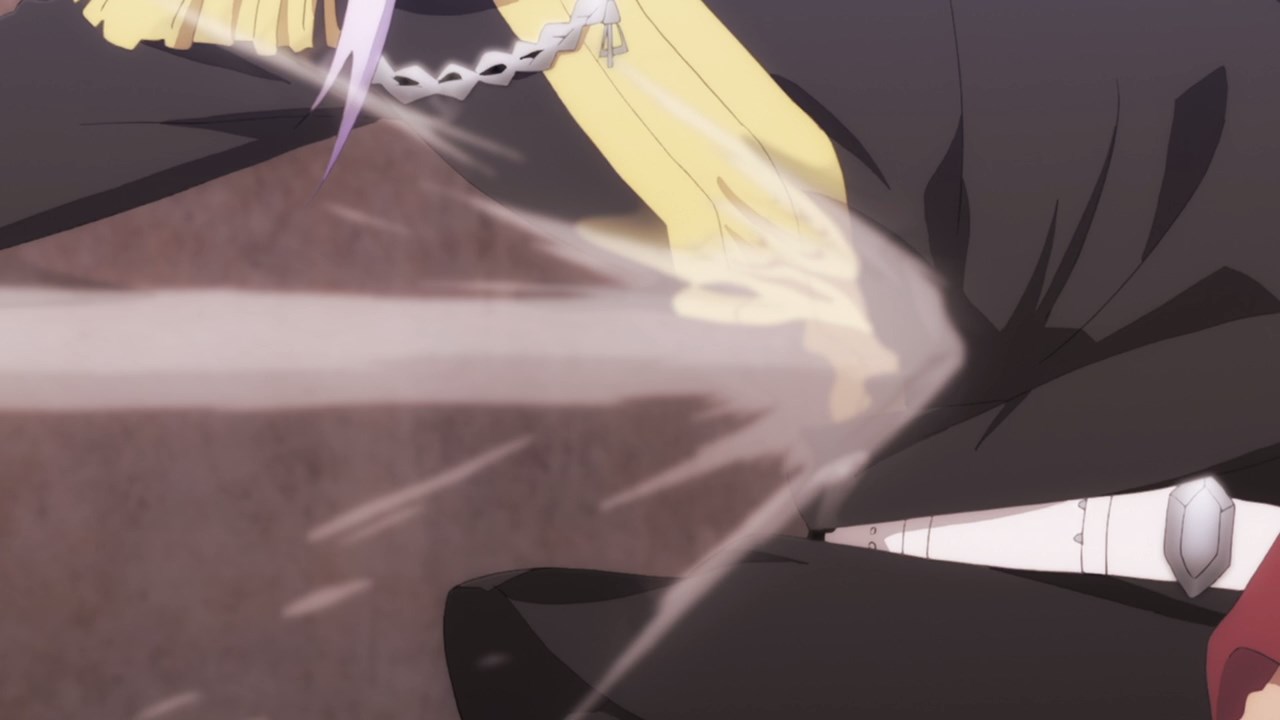 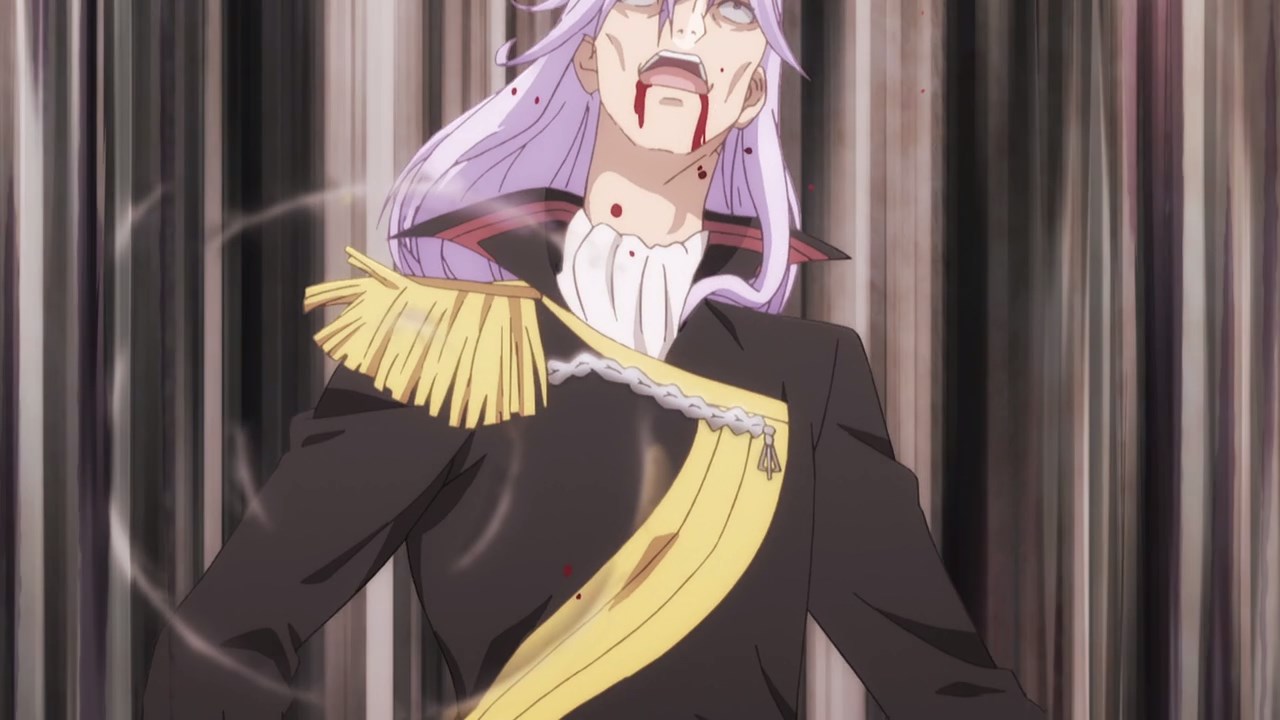 But once Krut loses it, Anos proceeds to give him a flurry of stabs that would leave the champion helpless. There goes Emilia’s brother as he wasn’t as tough! 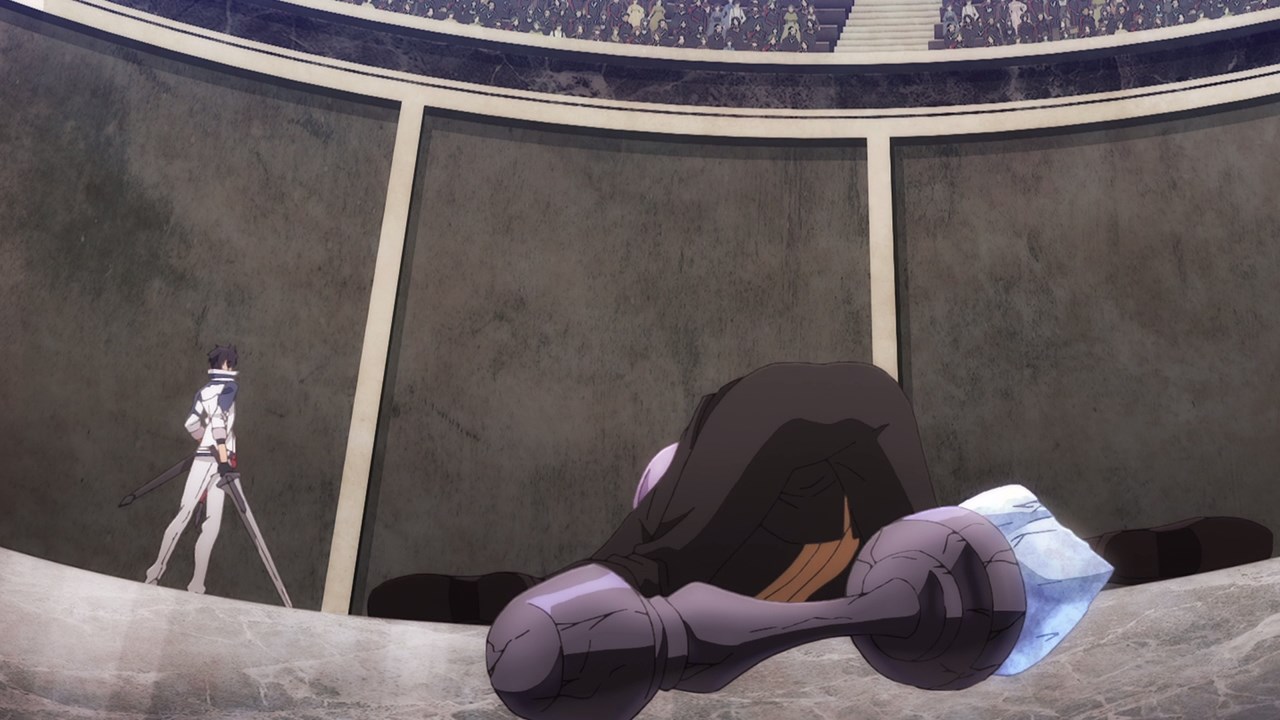 And so, Anos Voldigoad obliterates Krut Ludowell in under a minute. Gotta say that it was a walk in the park for the true demon lord! 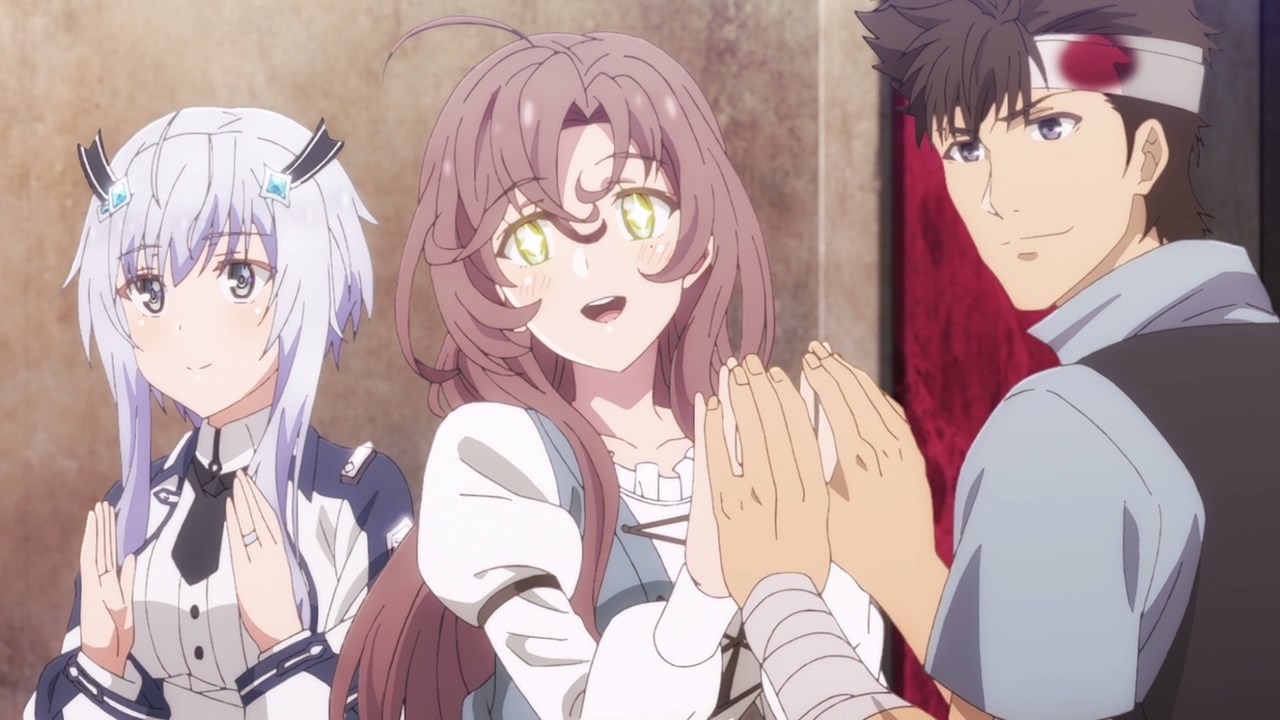 And while the royals are angry that a mere mongrel of a hybrid won over Krut, Anos’ supporters are celebrating that he move past the first round. 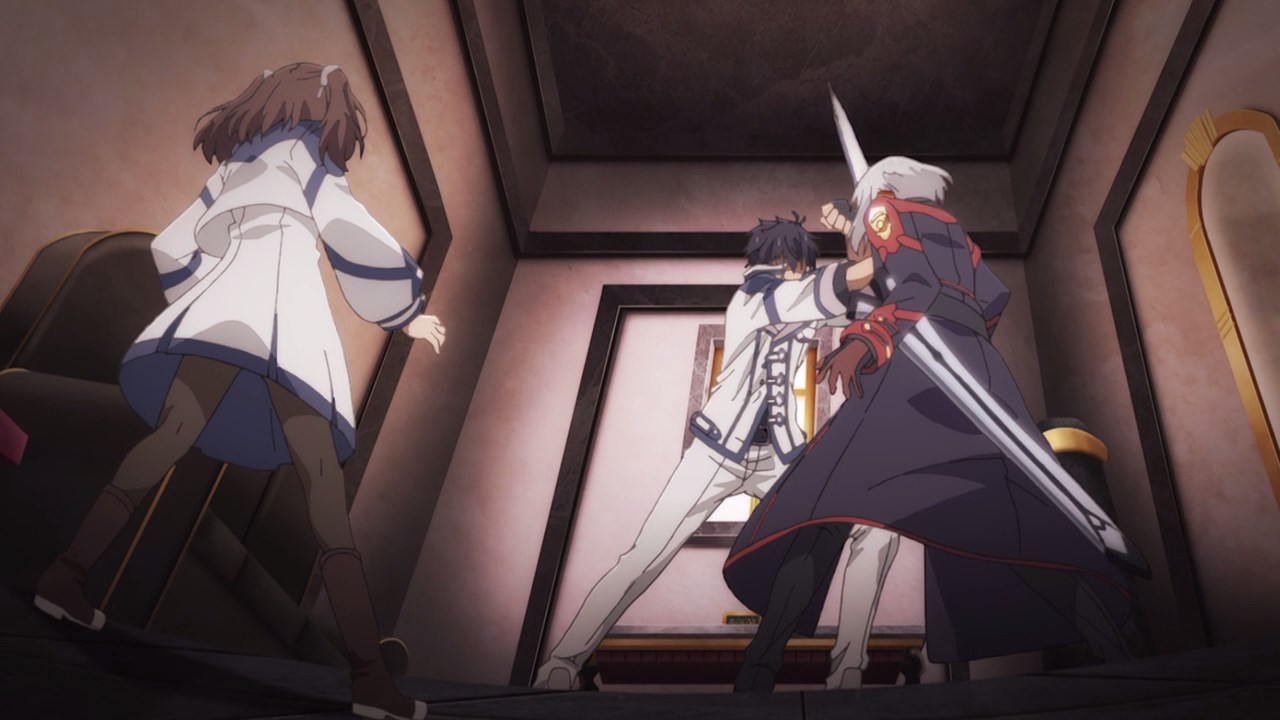 However, it appears that there’s a scuffle at the backstage where Anos Voldigoad got attacked by Lay Glanzudlii.

I wonder why he’s itching to fight Anos where they’ll eventually meet in the finals? 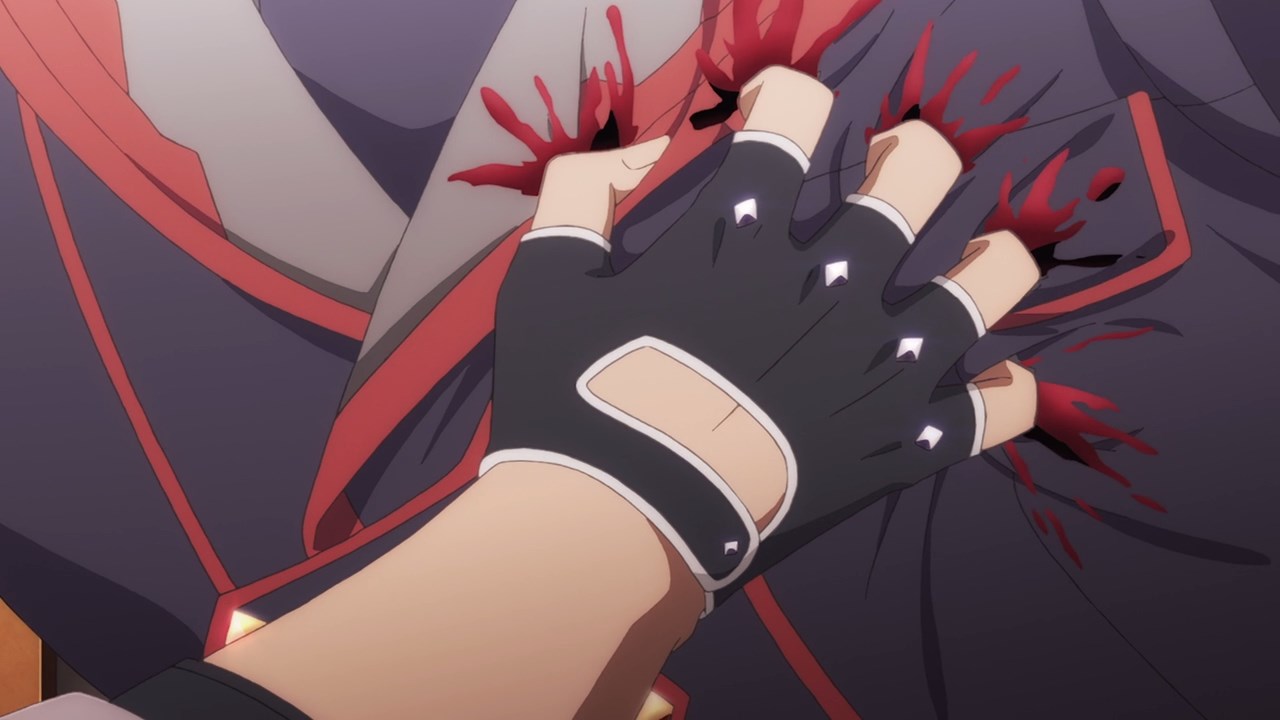 On the other hand, Anos sure is prepared to take Lay’s life as he sinks his fingers onto the swordsman’s heart. Then again, he’s not gonna kill Lay right now. 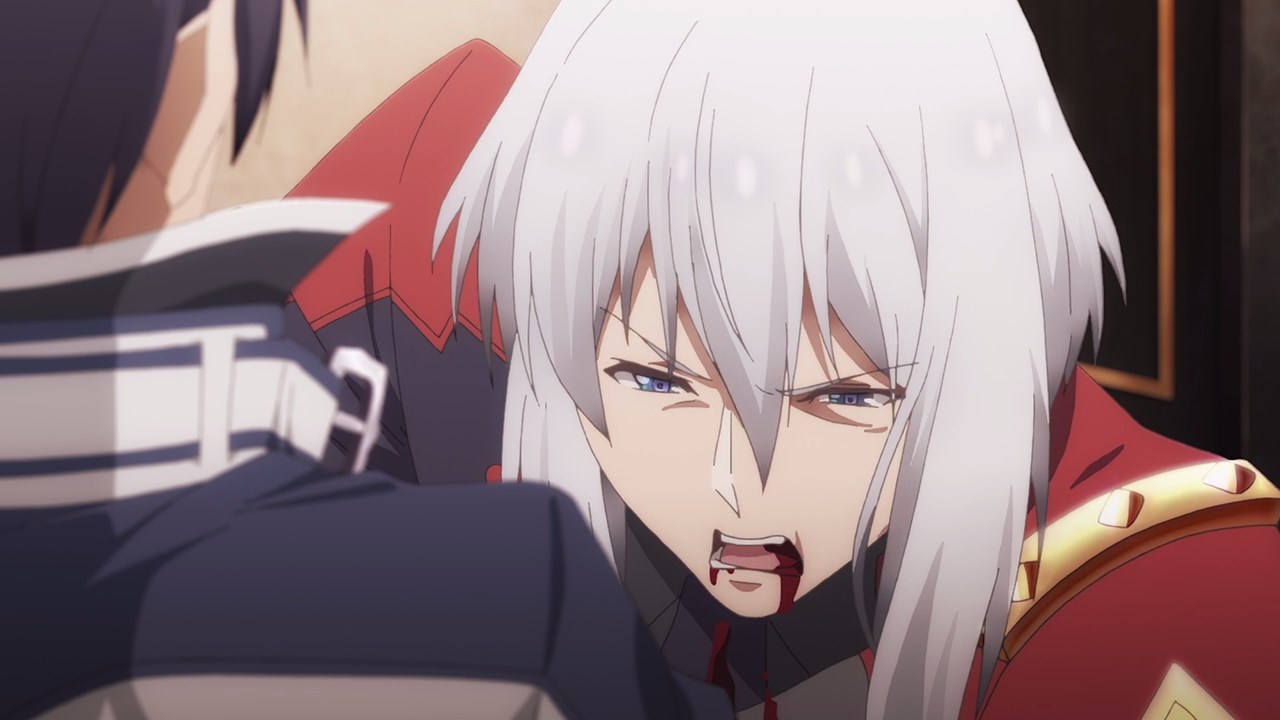 Anyways, it turns out that Lay Glanzudlii joined the Royalists to defeat Anos Voldigoad at the tournament, on the promise that they’ll save his mother’s life.

Of course, what if those Royalists decided to kill Lay’s mother once the deed is done? Gotta say that they’re sly bastards that can’t be trusted! 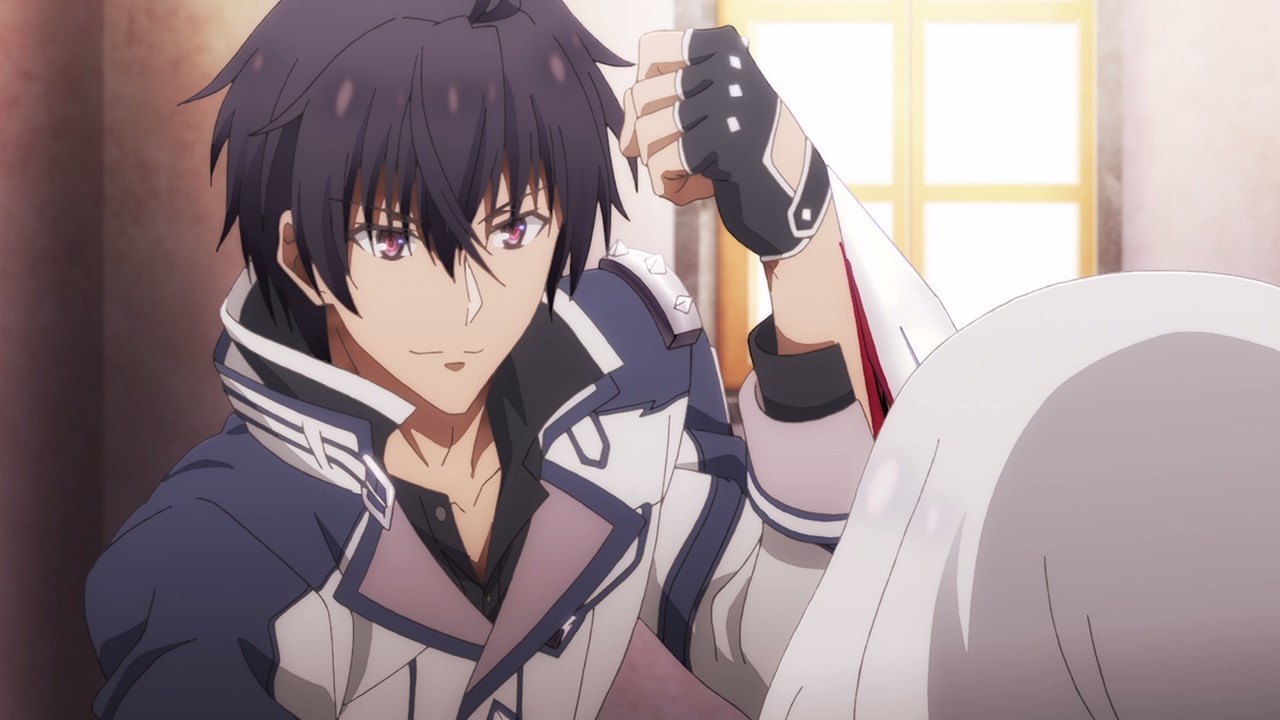 Regardless, Anos Voldigoad will meet Lay Glanzudlii at the finals and then have a no-holds barred battle there. Still, they need to knock those small-fries first before meeting each other. 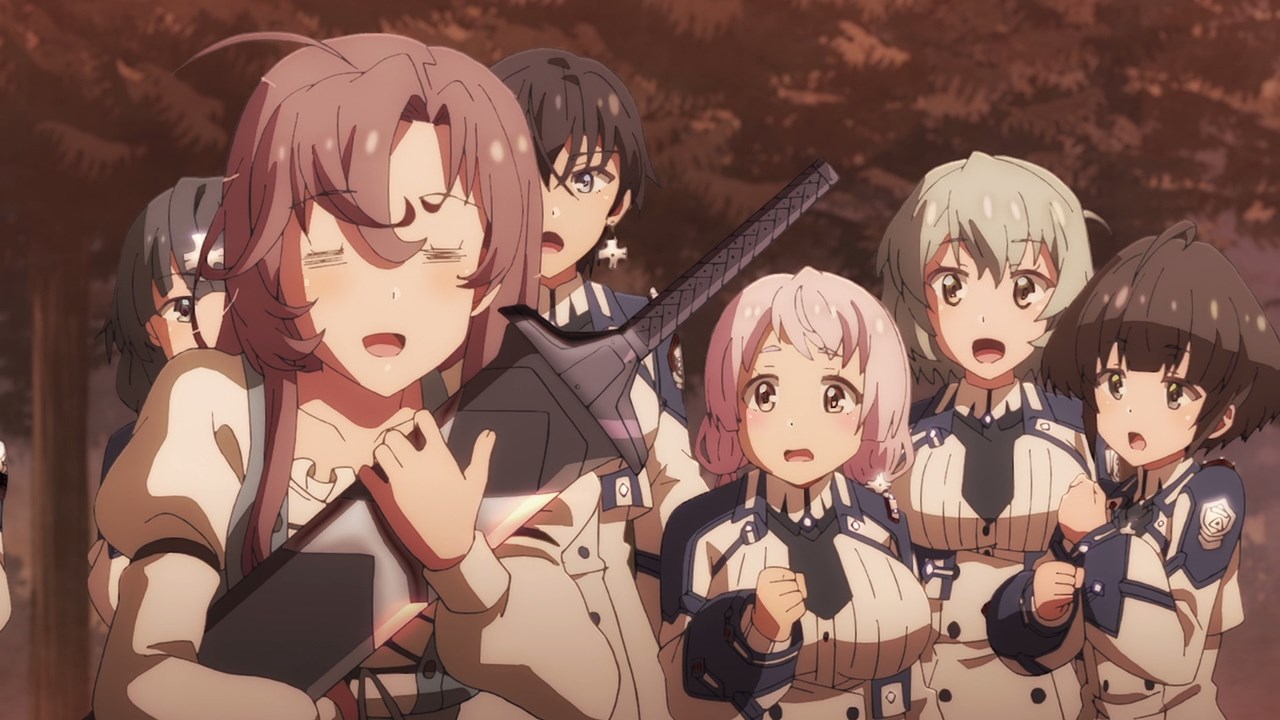 Afterwards, it’s time to go home where Anos will take a rest in preparation for the finals, while Izabella will hold his sword until then because here’s the thing though, competitors can’t changes swords during the tournament so if a competitor loses his/her original sword, he/she is disqualified.

With that said, I hope that Izabella is safe ’cause she has Anos’ sword. But don’t worry though as the Unitarians will protect Anos’ mother, although I bet that they might get killed by a rogue Royalist. 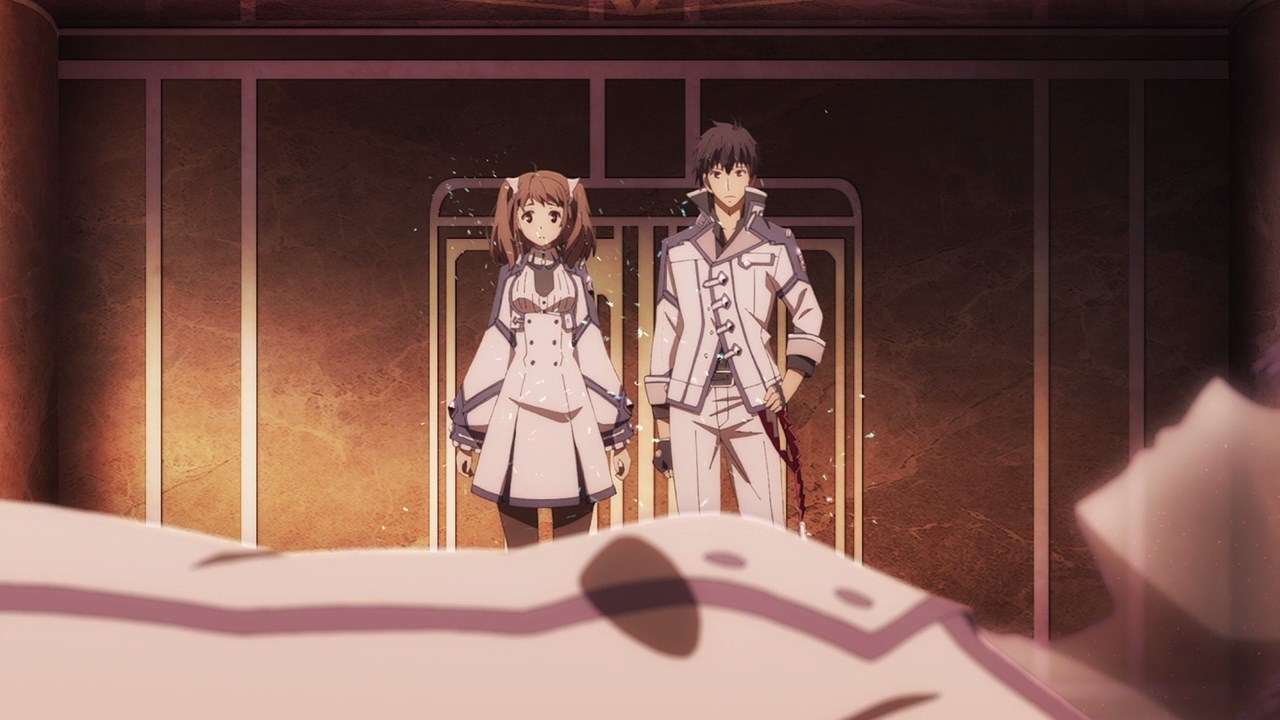 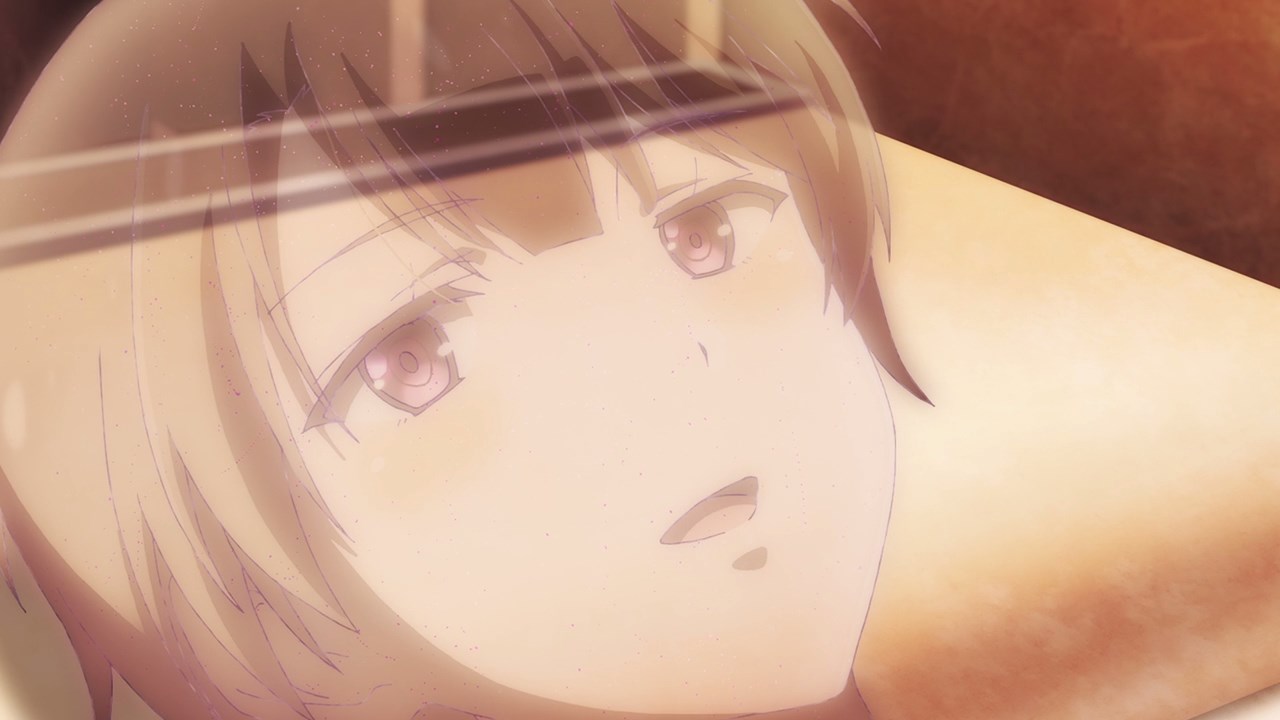 Anyways, this is Sheila where she’s actually the surrogate mother to Lay Glanzudlii. And here’s the thing though as Lay’s biological parents cast him away for being a failure, therefore Lay took up swordsmanship in order to become stronger without relying on magic powers. Wait, that sounds like Sairaorg Bael.

Still, Sheila Glanzudlii is happy that her son has a friend like Anos Voldigoad ’cause unlike before, Lay is unmatched that he got bored with his life until Anos beats him. 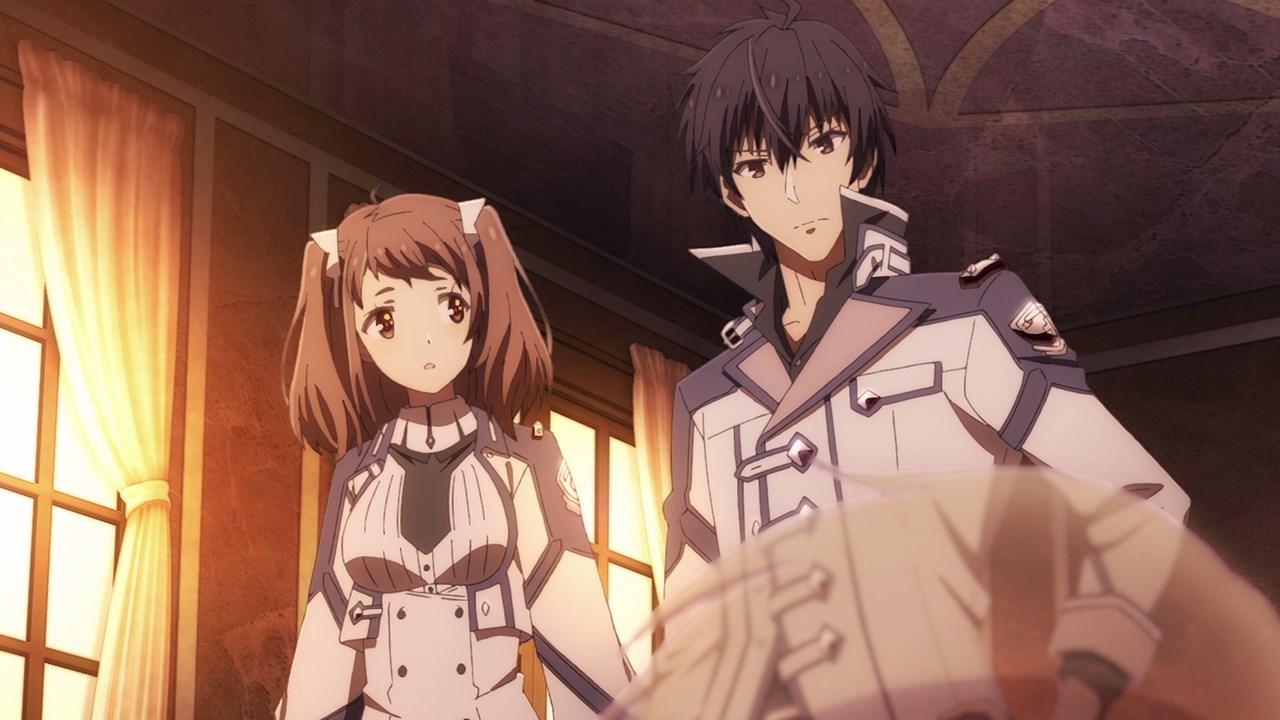 Of course, Anos will save Sheila’s life since he doesn’t want Lay getting tied to the Royalists. In fact, the Royalists might kill Lay should he disobeys their orders. 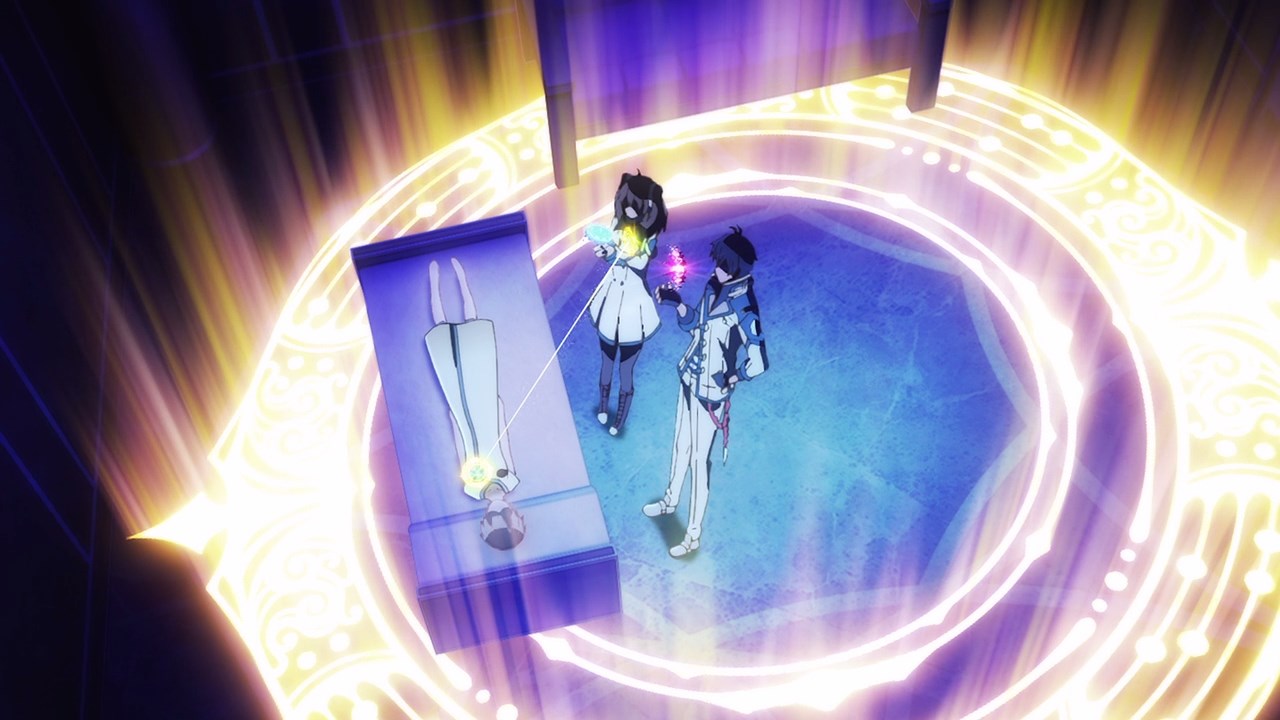 So, the only thing that Anos Voldigoad can do is to transfer Misa Ilioroagu’s life force to Sheila Glanzudlii using his magic.

However, it’s not easy to transfer someone’s life because spirits are born from traditions and rumors throughout the ages. And while Misa’s spirit source is somewhat strong despite having demon blood, Sheila’s source is starting to fade away.

Regardless, Anos will continue the ritual of saving Sheila’s life, but that would take a long time so until then, Misa will have to hold it out until the ritual is over. 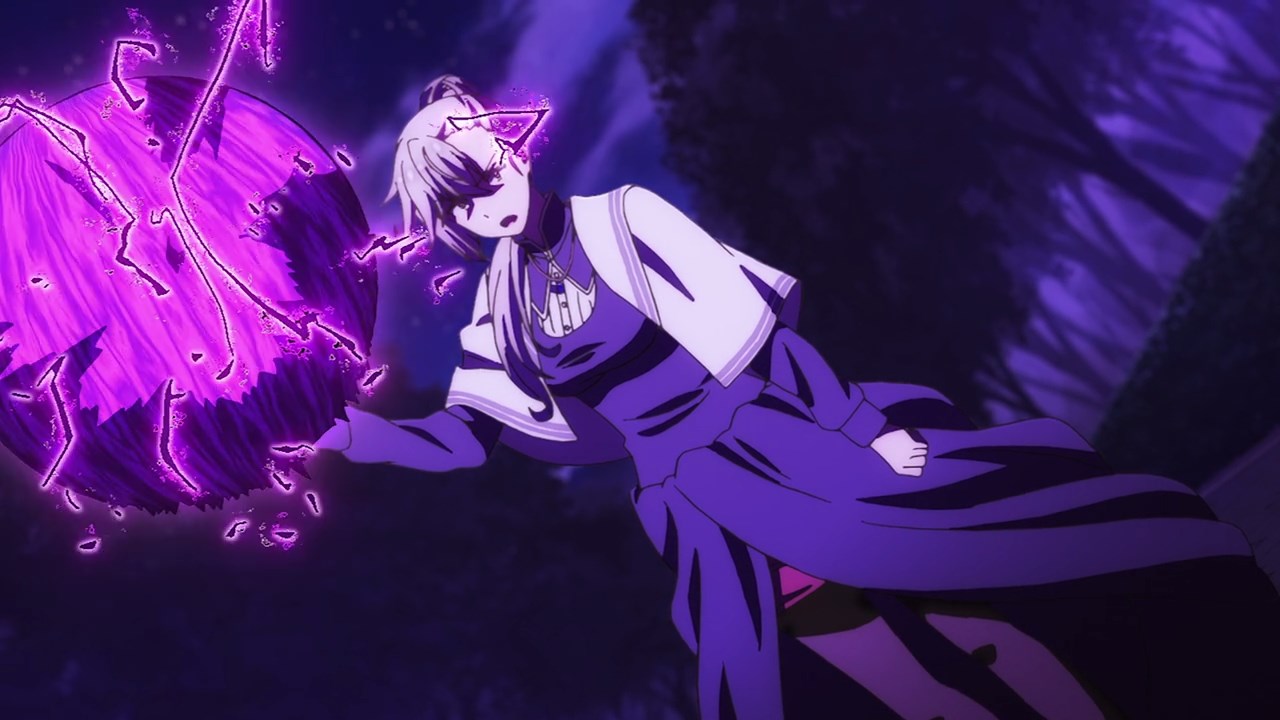 Meanwhile, Emilia Ludowell has appeared in front of Izabella as she demands Anos’ mother to hand over his sword. I know what you’re thinking Emilia, you’re trying to disqualify Anos ’cause your brother has lost in the first round.

Of course, Izabella won’t give into Emilia’s demands so she decides to take the sword by force. 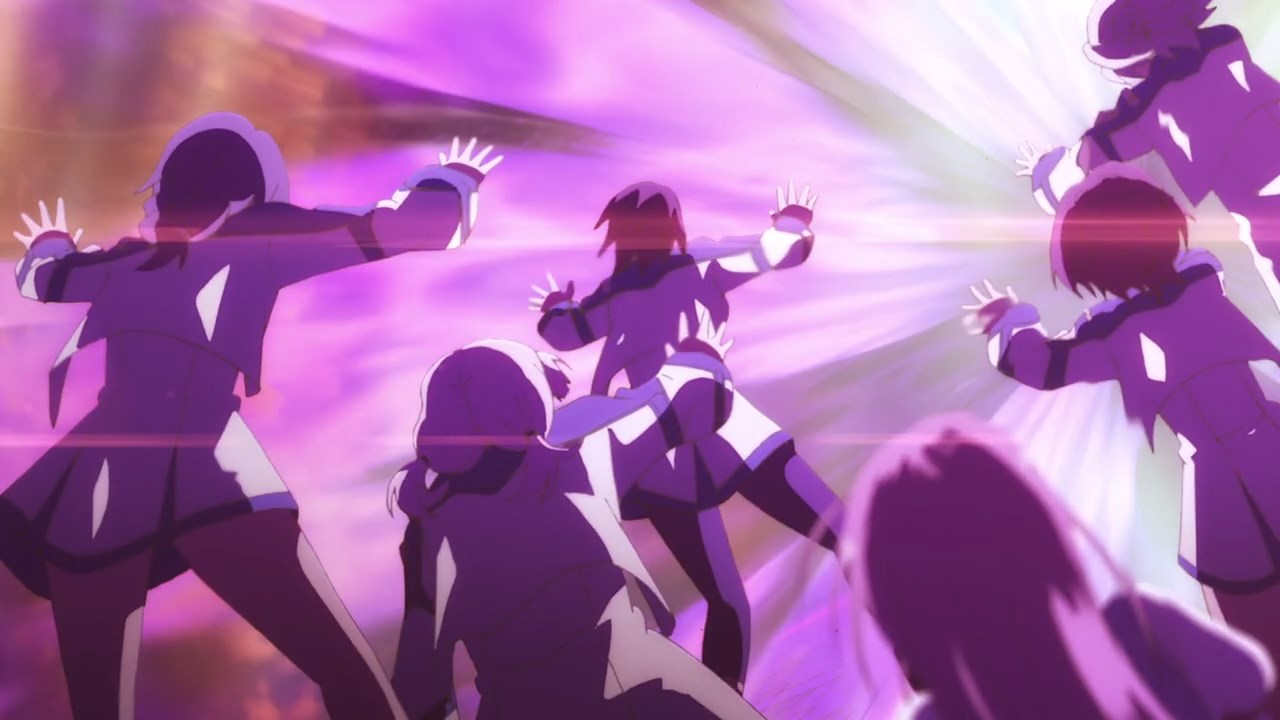 Fortunately, the Unitarians are here to protect Izabella despite being hybrid demons. But regardless of their power level, their loyalty towards Anos is strong that they won’t die so easily. 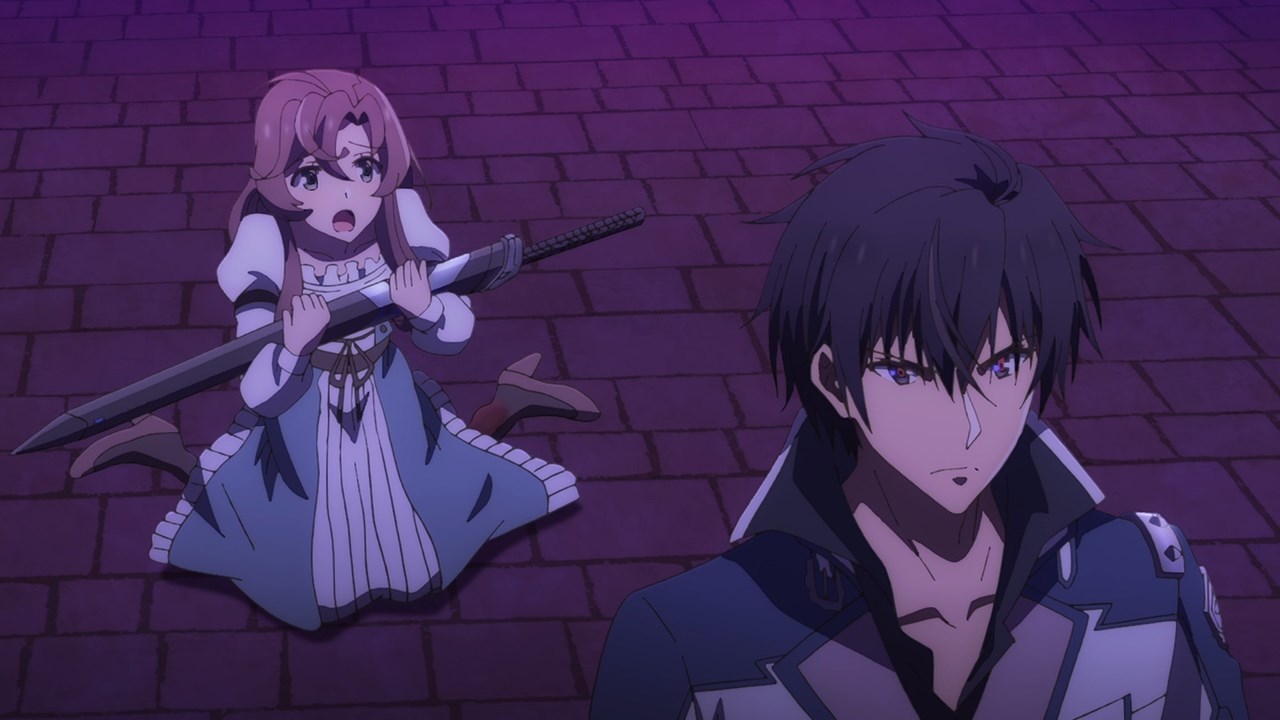 Luckily, Anos Voldigoad where he arrived just in time to save Izabella, although he doesn’t like Emilia targeting his mother. 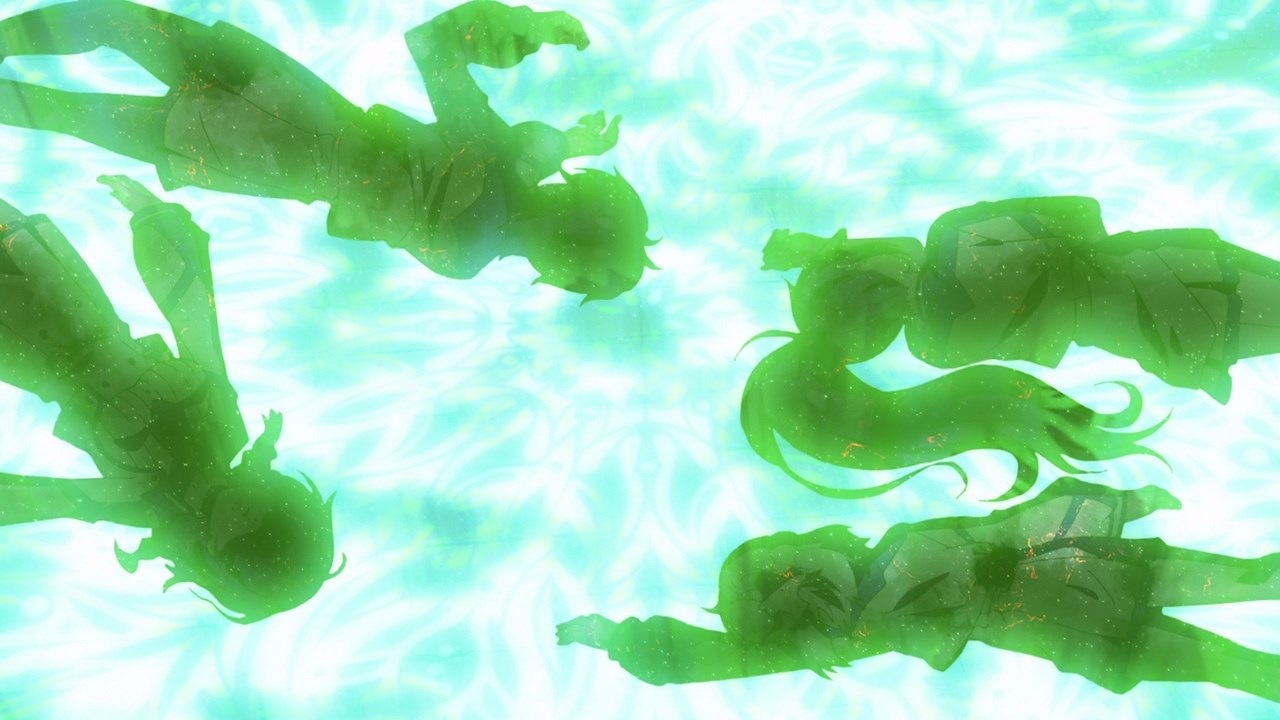 But first, time for Anos to heal the Unitarians as they did a great job of protecting his mother’s life. 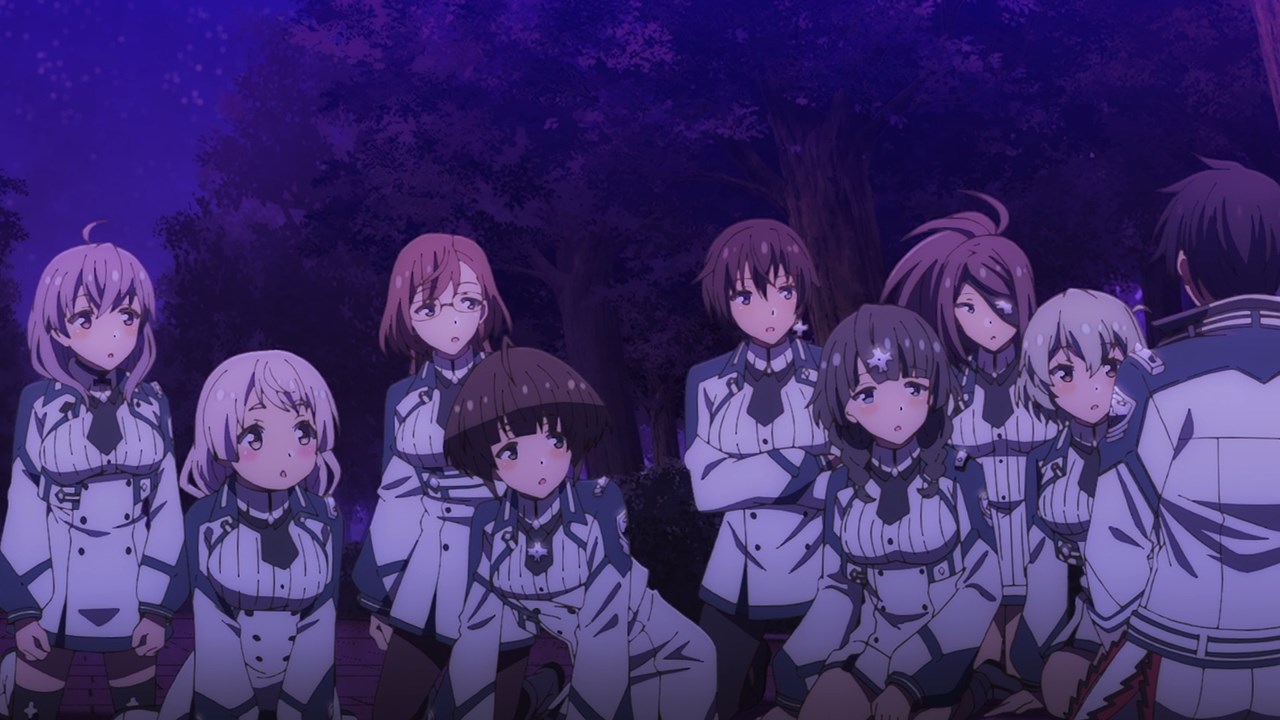 Anyways, he won’t forget the bravery that they showed when facing any adversary, including a pure-blood demon who hates hybrids. Of course, Anos won’t forgive Emilia for hurting his mother and his supporters. 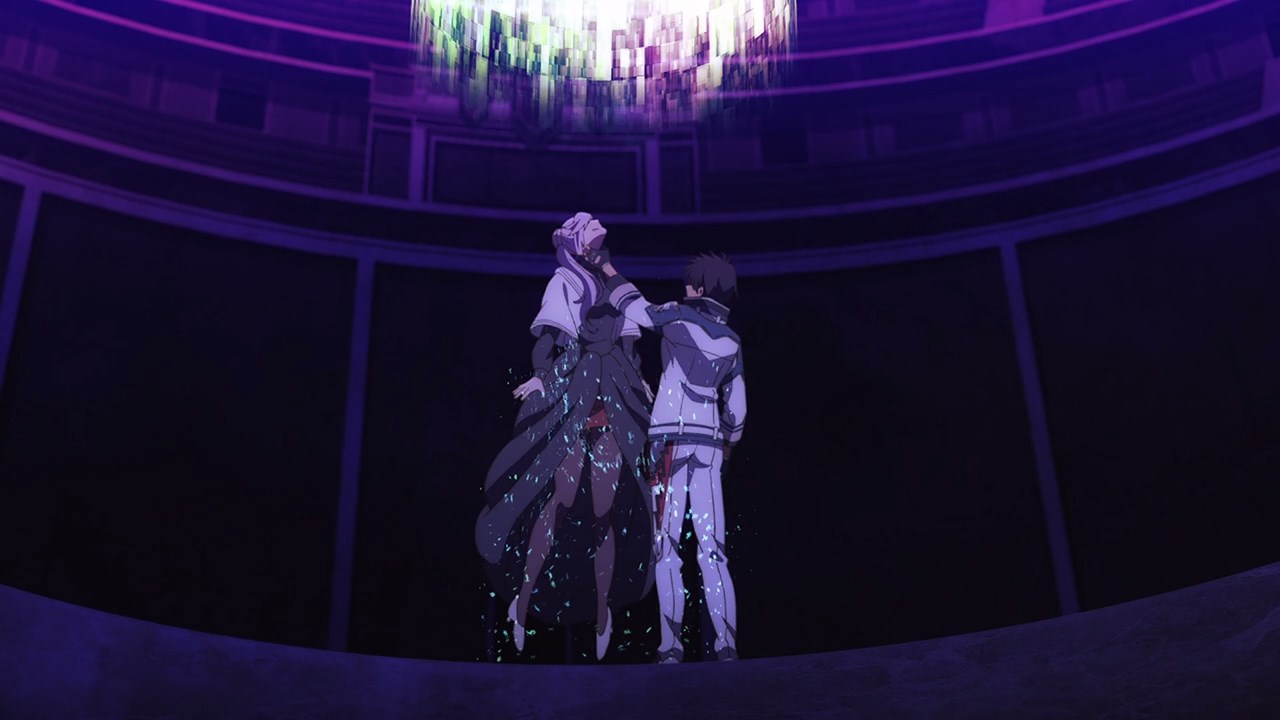 Therefore, she’ll have a taste of her own medicine as Emilia Ludowell was taken to the arena by Anos Voldigoad. And really, he’s not gonna show any mercy towards Emilia. 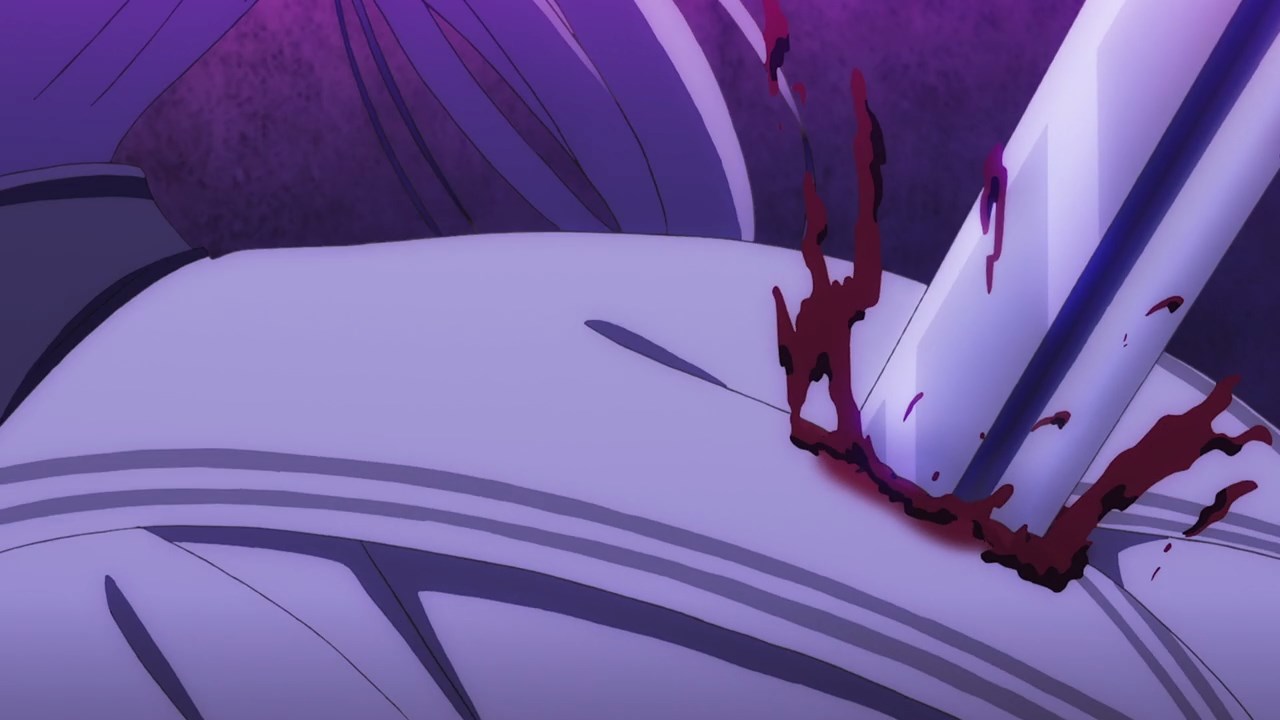 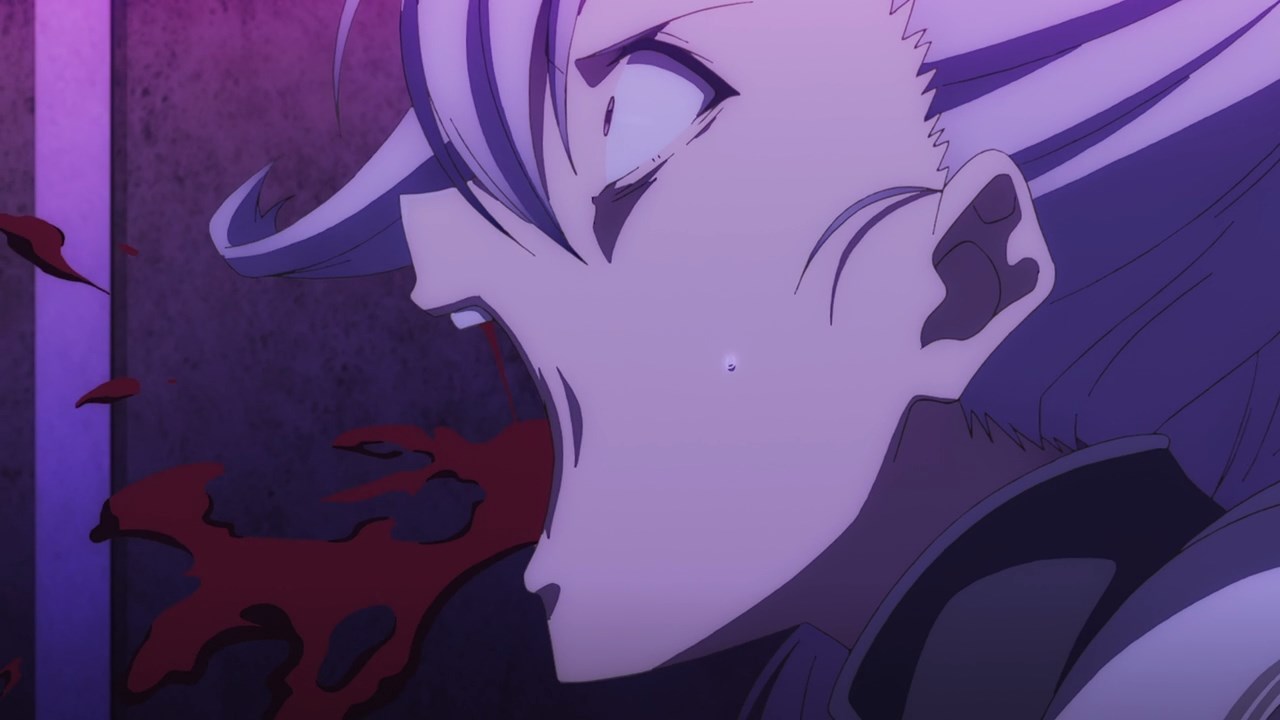 So, Anos stabs Emilia to the heart until she begs for mercy. Of course, he’s not gonna let her go until Emilia swears loyalty to him. 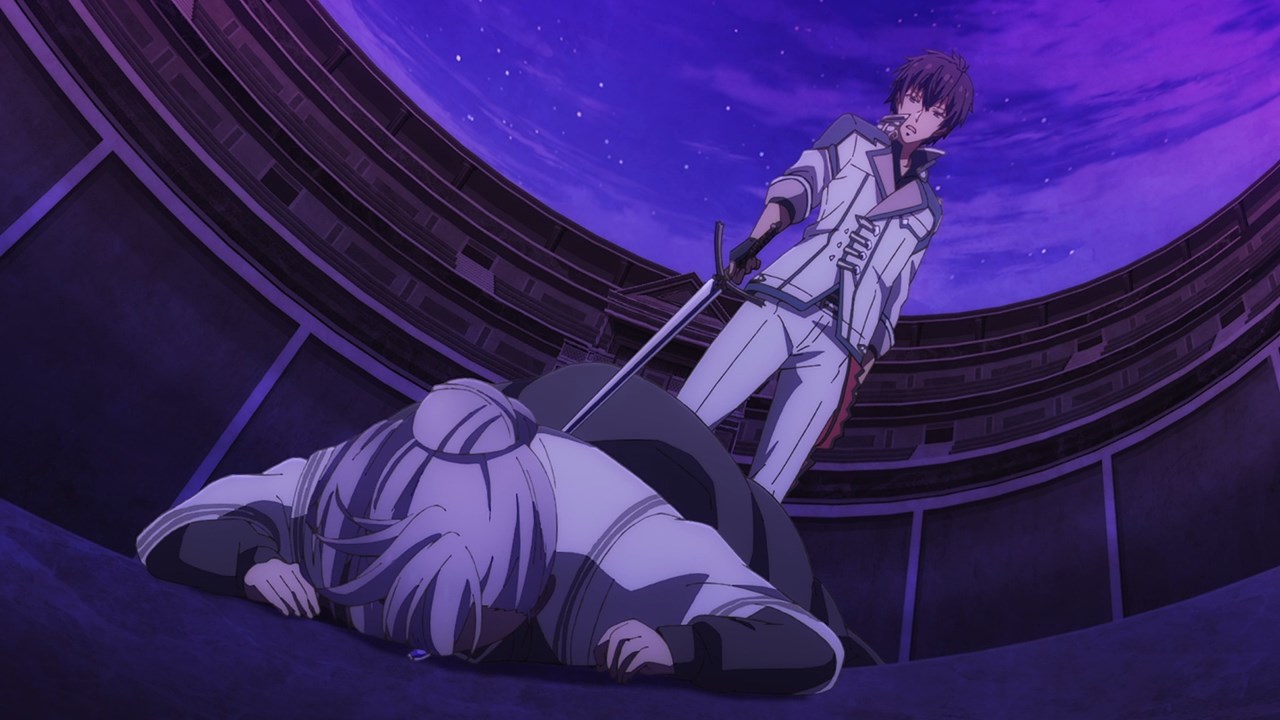 But even if she begs for mercy, Anos won’t forgive Emilia ’cause for one, he doesn’t like liars and two, hurting his family and friends is the last straw for this teacher.

And so, Anos Voldigoad killed Emilia Ludowell but he’s not over yet… 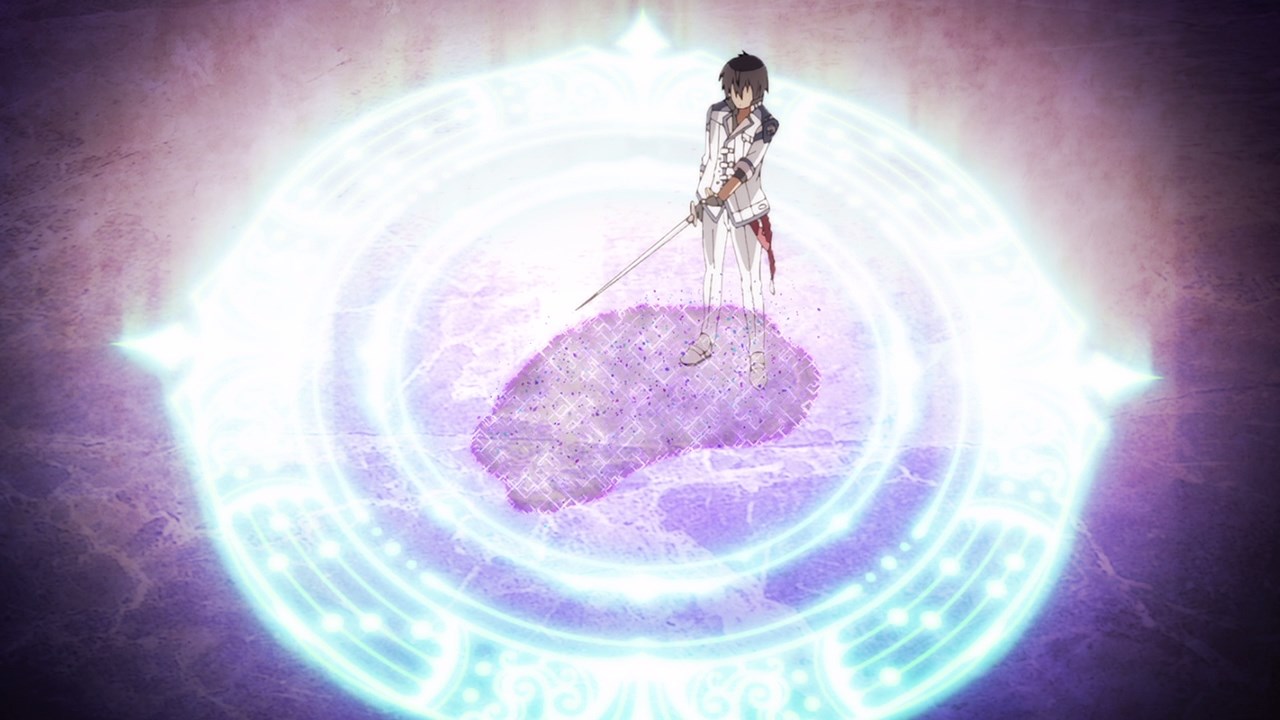 That’s because he’s gonna resurrect Emilia Ludowell via Azheb. However, Anos won’t just revive her much like what happened to Zepes and Leorg Indu in the first episode…

Turns out, Anos will resurrect Emilia as a hybrid demon which is a fitting punishment for belittling other hybrids. Oh and if she tries to end her life, Anos placed a curse on Emilia which she’ll be reborn as a hybrid no matter what.

With that said, looks like the entire Ludowell family will disown Emilia for being a hybrid demon. Serves her right! 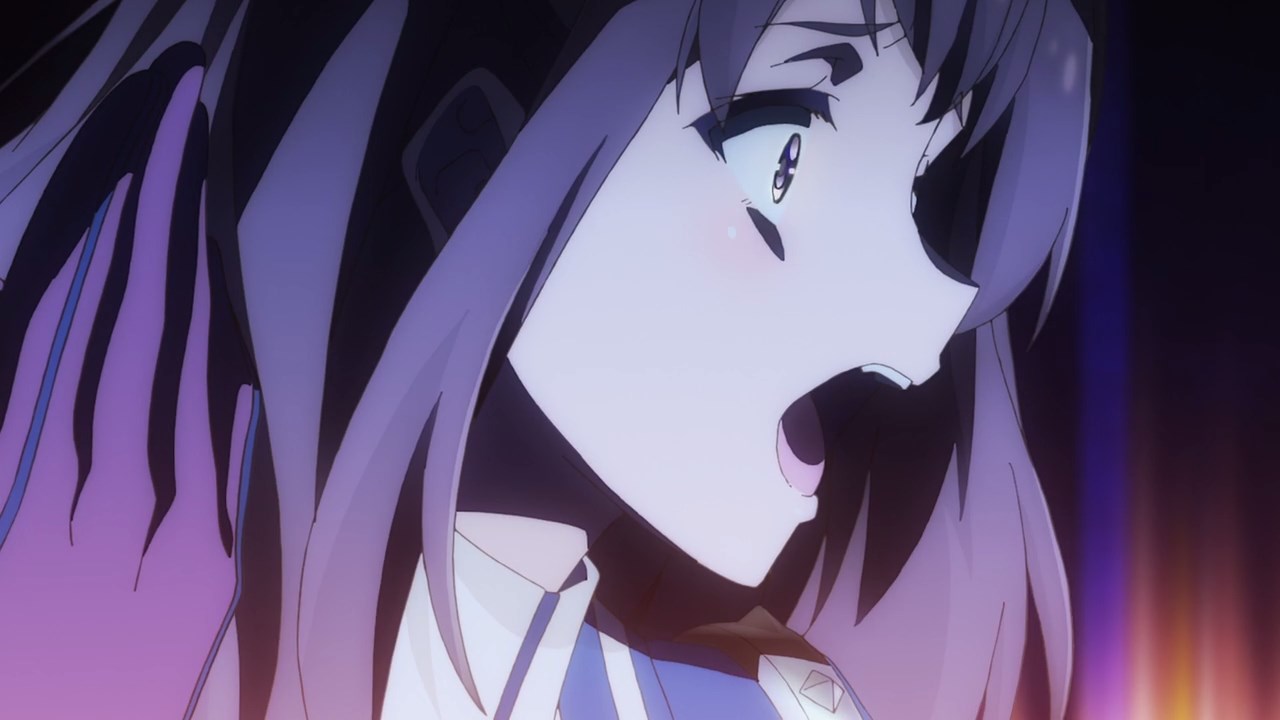 Now let’s go back to Lognorth Magic Hospital where Misa Ilioroagu got knocked out by someone while attempting to transfer her life force to Sheila Glanzudlii. Okay, who attacked her? 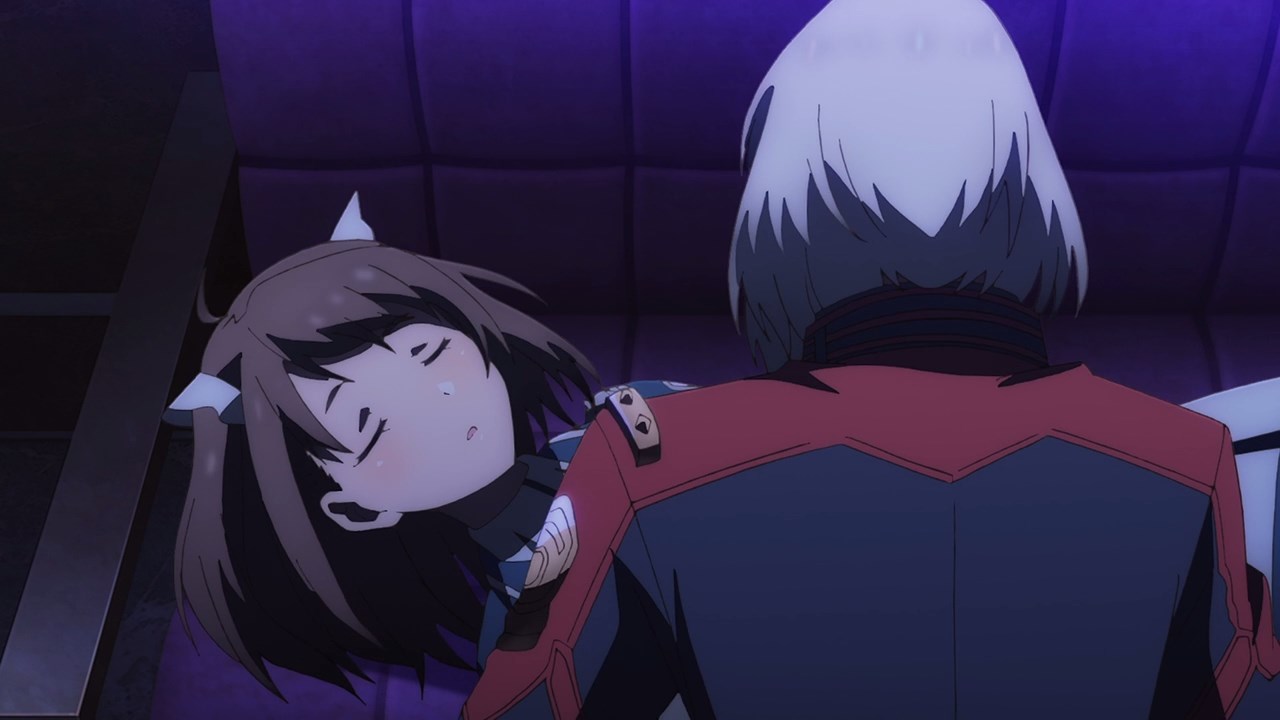 Wait, don’t tell me that Lay Glanzudlii knocked Misa out? C’mon, she’s saving his mother’s life so why would Lay interfere? 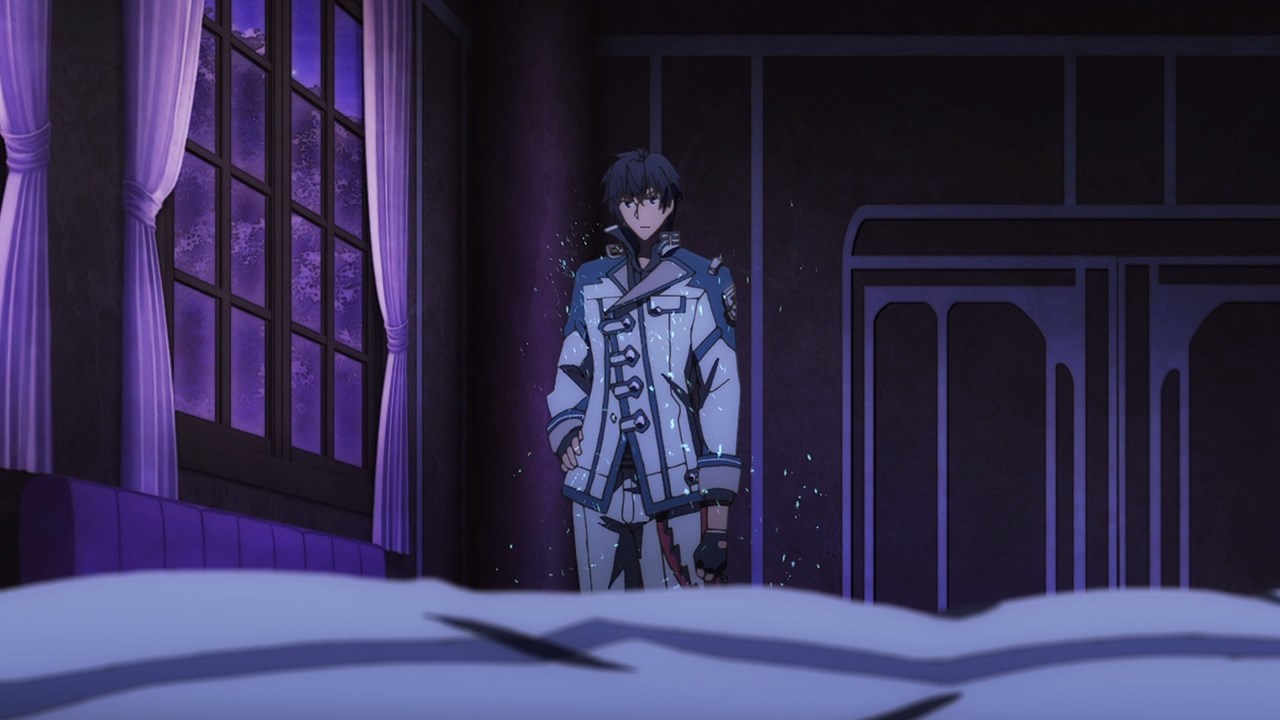 Meanwhile, Anos Voldigoad has returned to Lognorth Magic Hospital but unfortunately for him, the ritual was interrupted by Lay Glanzudlii. Man, I have a feeling that Lay wants to settle things on the ring instead of letting Anos save his mother’s life. 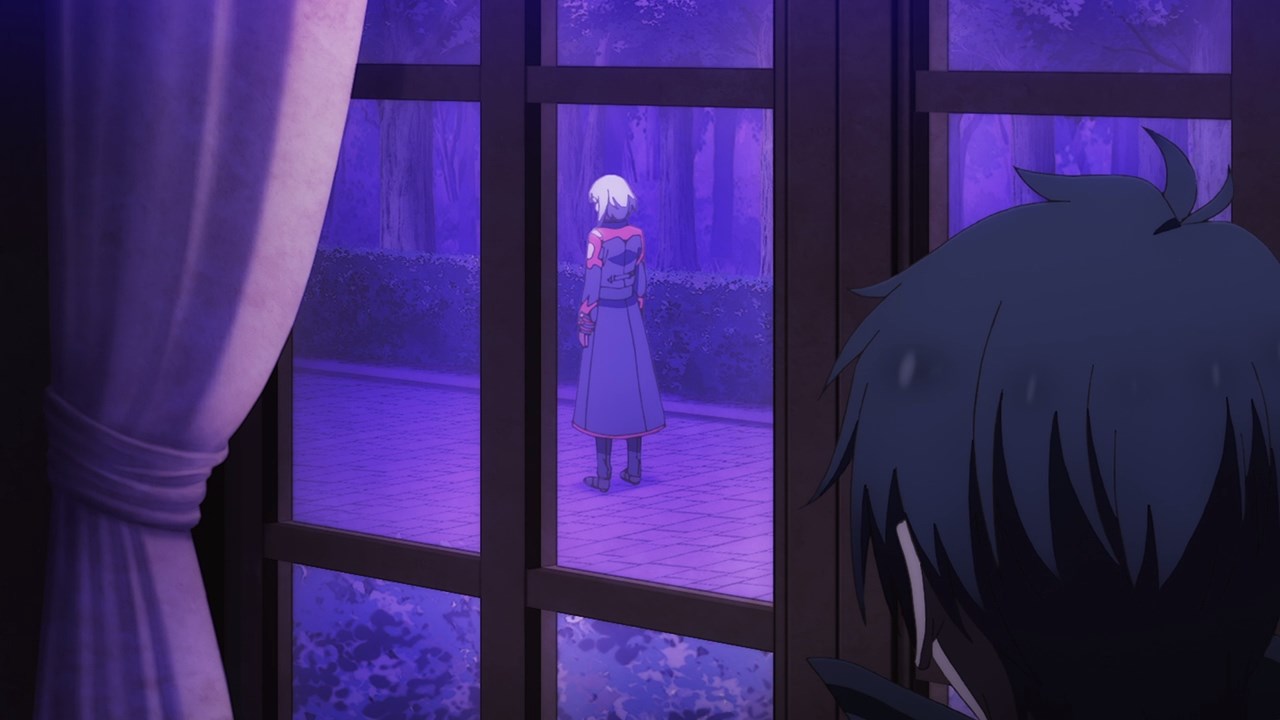 Still, I think that Anos Voldigoad will do something to save both Lay and Sheila Glanzudlii as he doesn’t want to lose someone. Of course, Anos will have to find the mastermind who’s not only running the sham of a tournament, but also the hospital that holds Lay’s mother as a hostage.

With that said, I’ll see you next time where Anos and Lay will face each other at the Magic Sword Tournament finals!