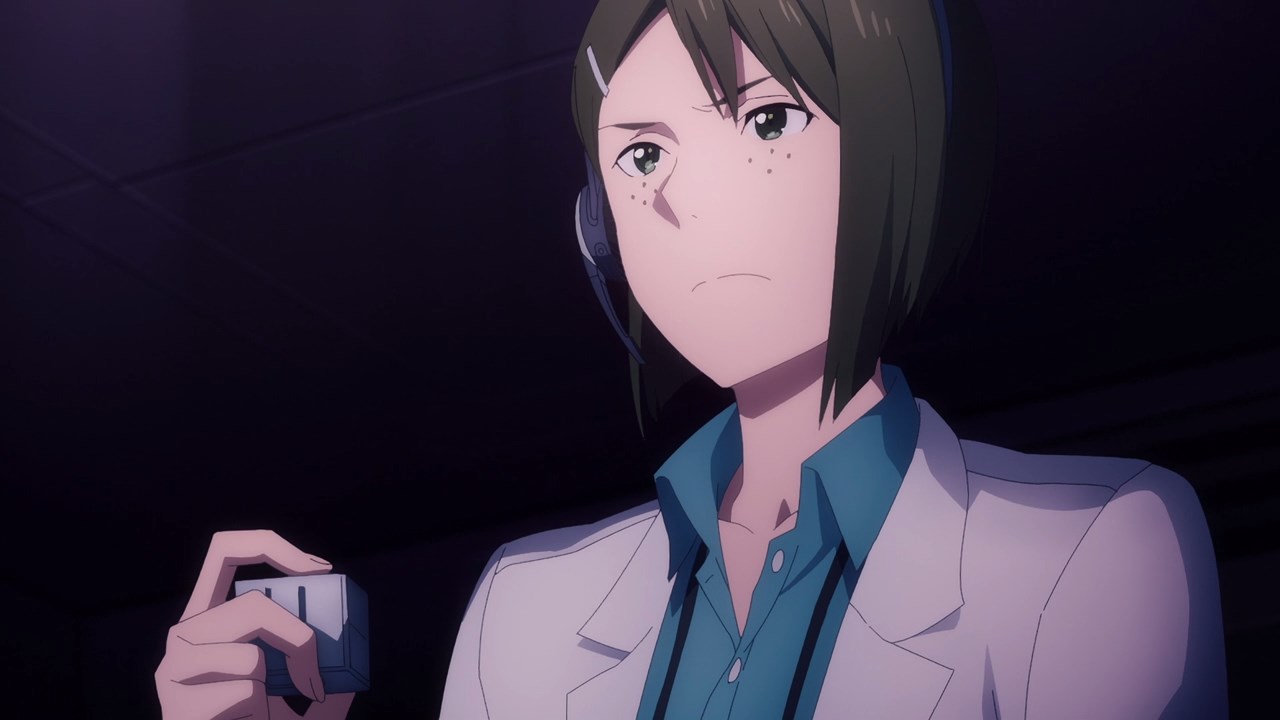 Well we got some good news as Rinko Koujiro got Alice Schuberg’s Lightcube, meaning that her Fluctlight is safe. 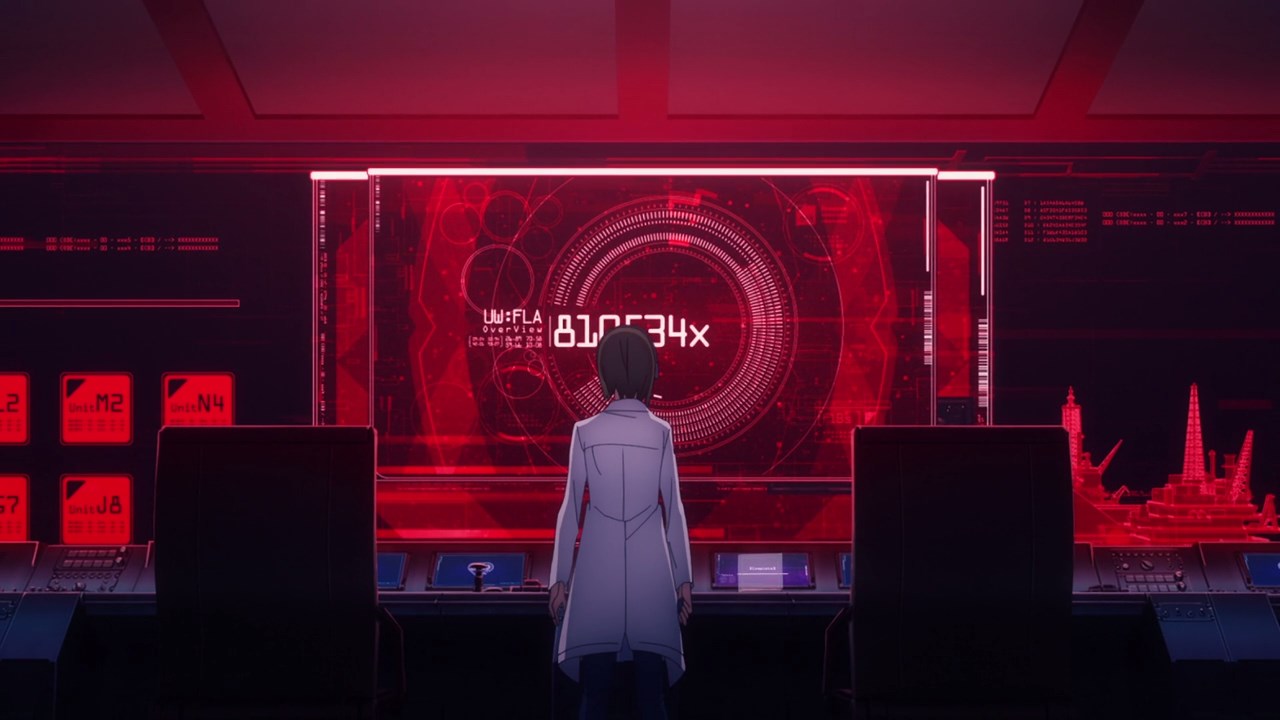 Oh and there’s the issue of storage where the Fluctlights have a limit when it comes to storing memories. And since Kirito and Asuna are stuck inside the Underworld, they’ll either force to remove their old memories or getting risk of breaking themselves. C’mon, I want them to live! 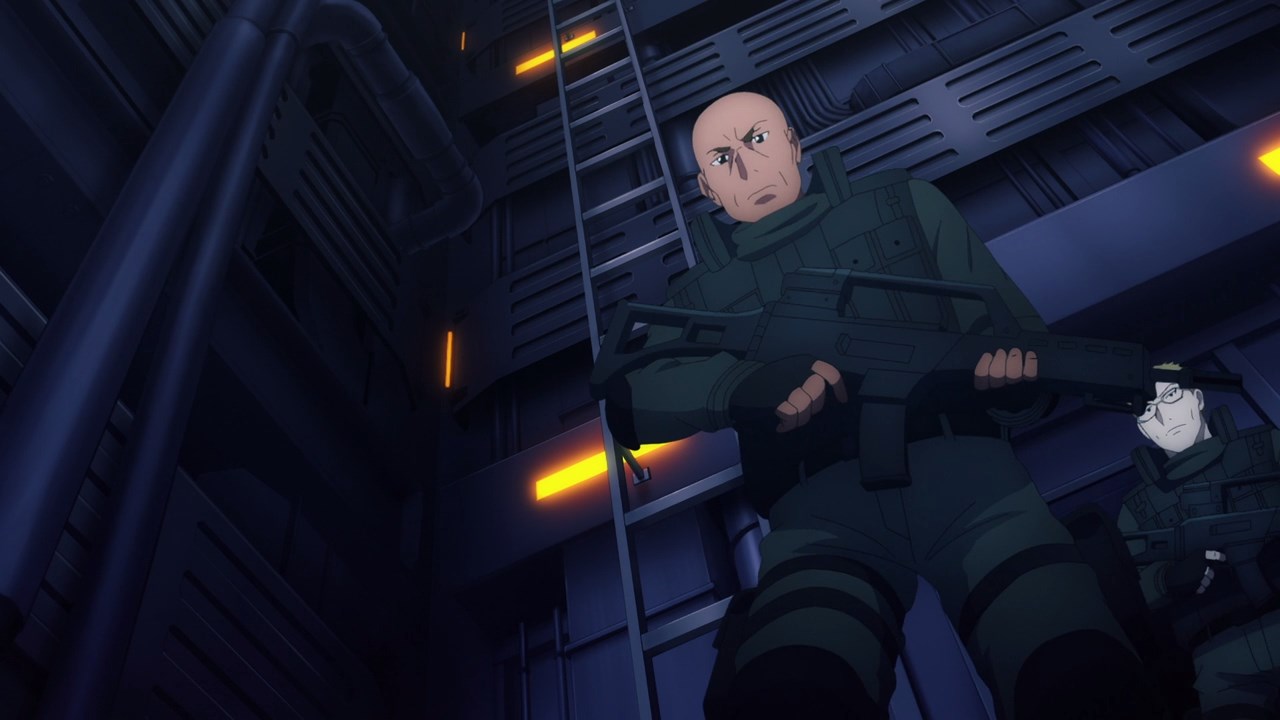 Now let’s go to the bulkhead where Critter and Brigg will try to brute-force their way to get their hands on Alice’s Lightcube and get the hell out of the Ocean Turtle. 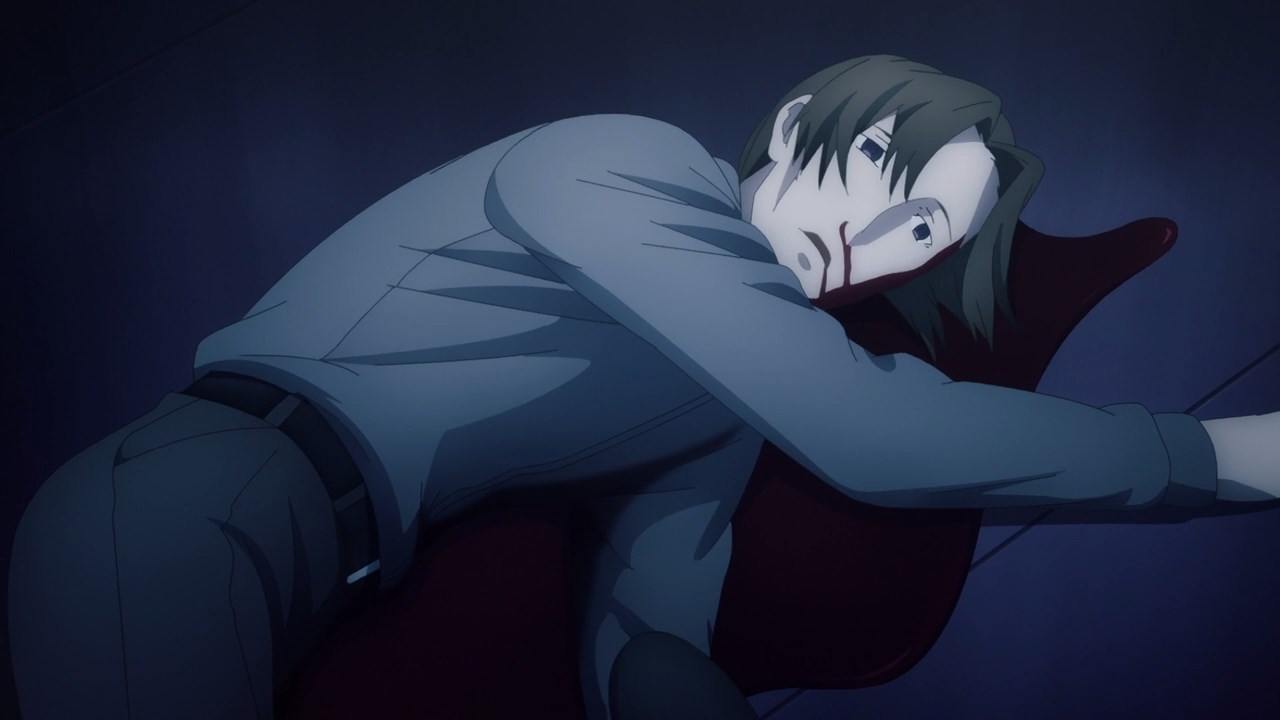 Oh yeah, it looks like they check on their informant Yanai-san where he’s already dead. Yeah, he didn’t survive the fall back then. 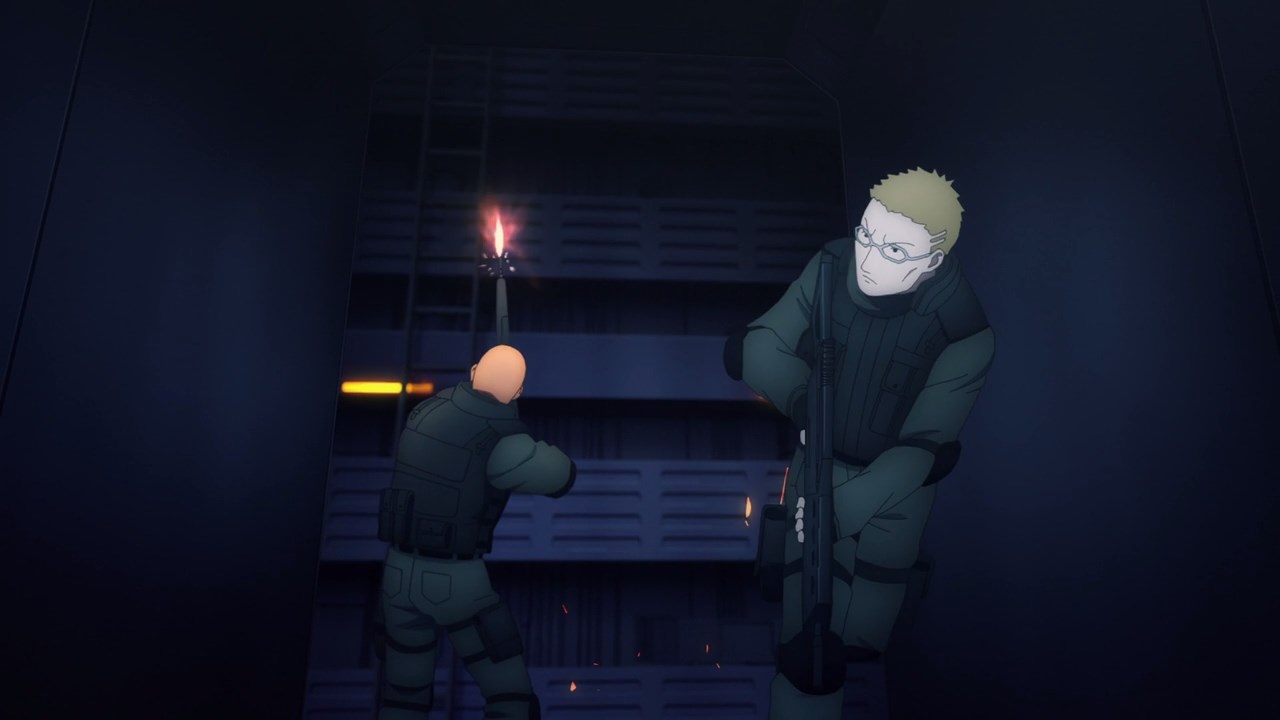 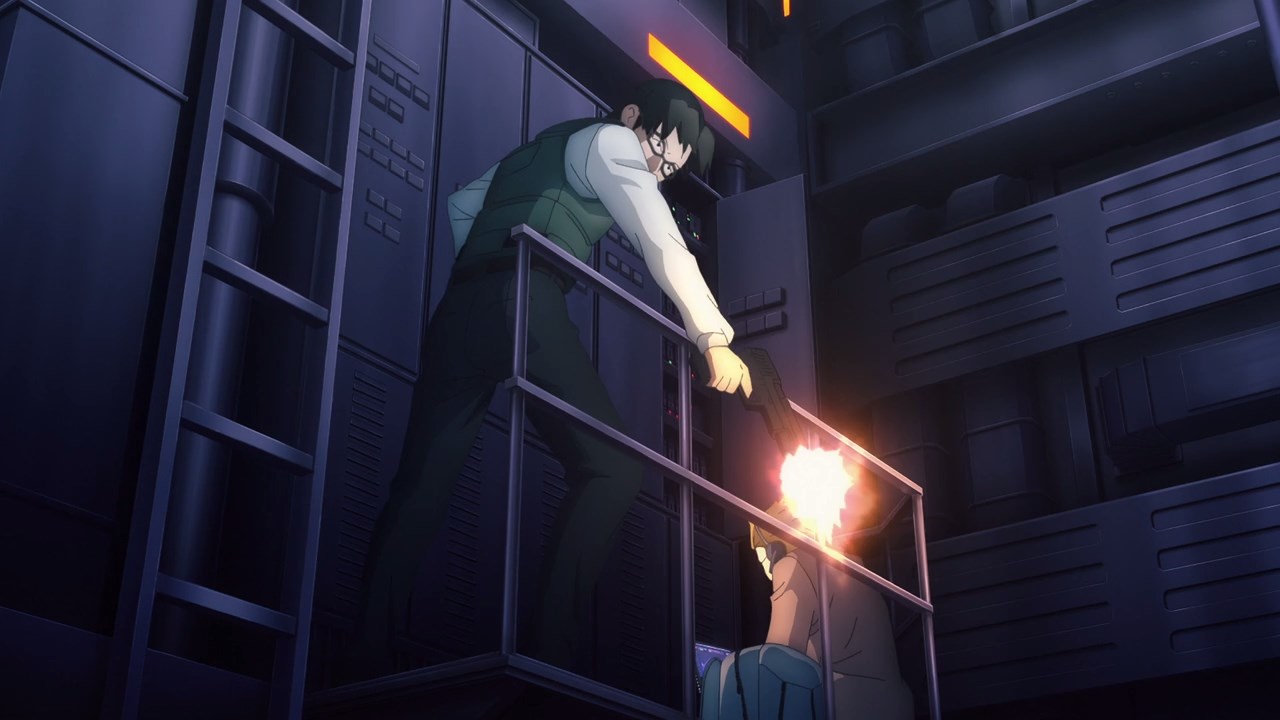 Unfortunately for those goons from Glowgen Defense Systems, they got ambushed by Seijirou Kikuoka where he’s shooting them down with a handgun. C’mon, he doesn’t want those goons gunning down Takeru Higa.

Anyways, Kikuoka got shot down in the chest, although his body armor saved him from getting a fatal wound. Then again, I’m worried that Seijirou’s ribs got broken after getting shot in the chest by a rifle round. 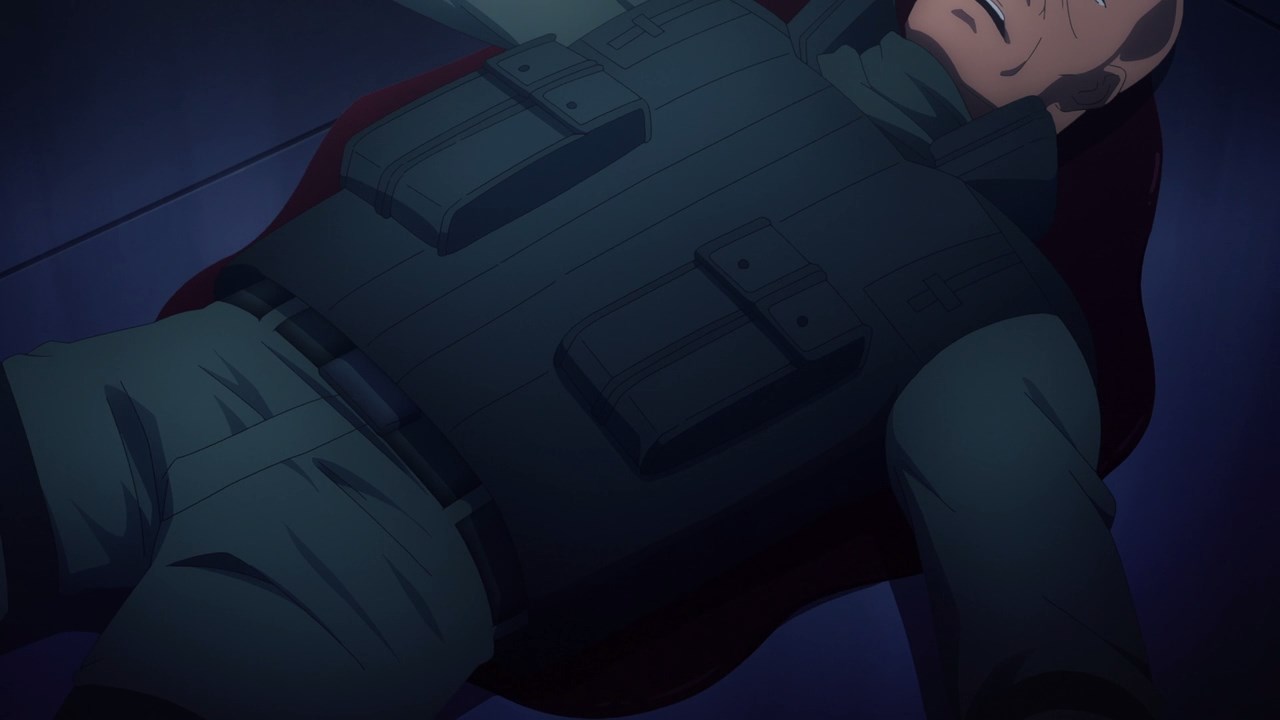 But as for Brigg, he’s dead. Basically, they’re running out of options for Critter and his crew so he has to consult their captain on their next plan. 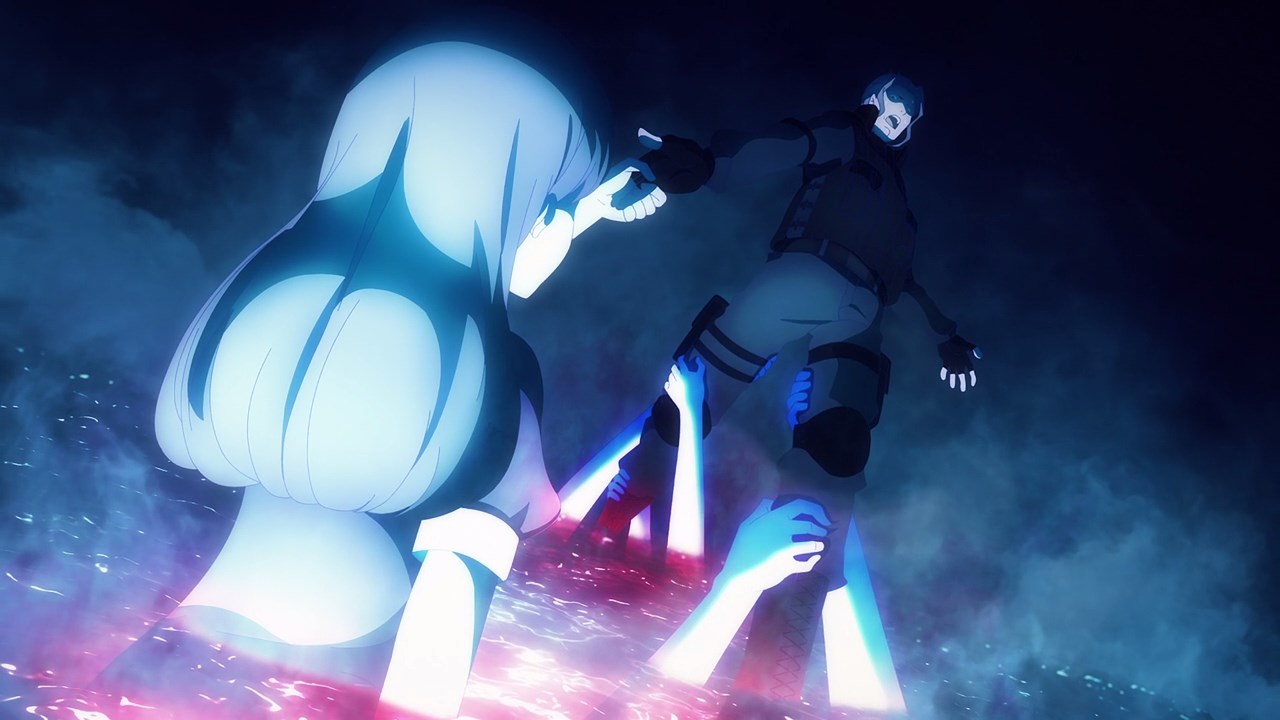 Oh yeah and speaking of Gabriel Miller, looks like he’s having the worst nightmare today after being defeated by Kirito with the help from Eugeo. Seems that everyone he killed back then is now dragging him down to hell. 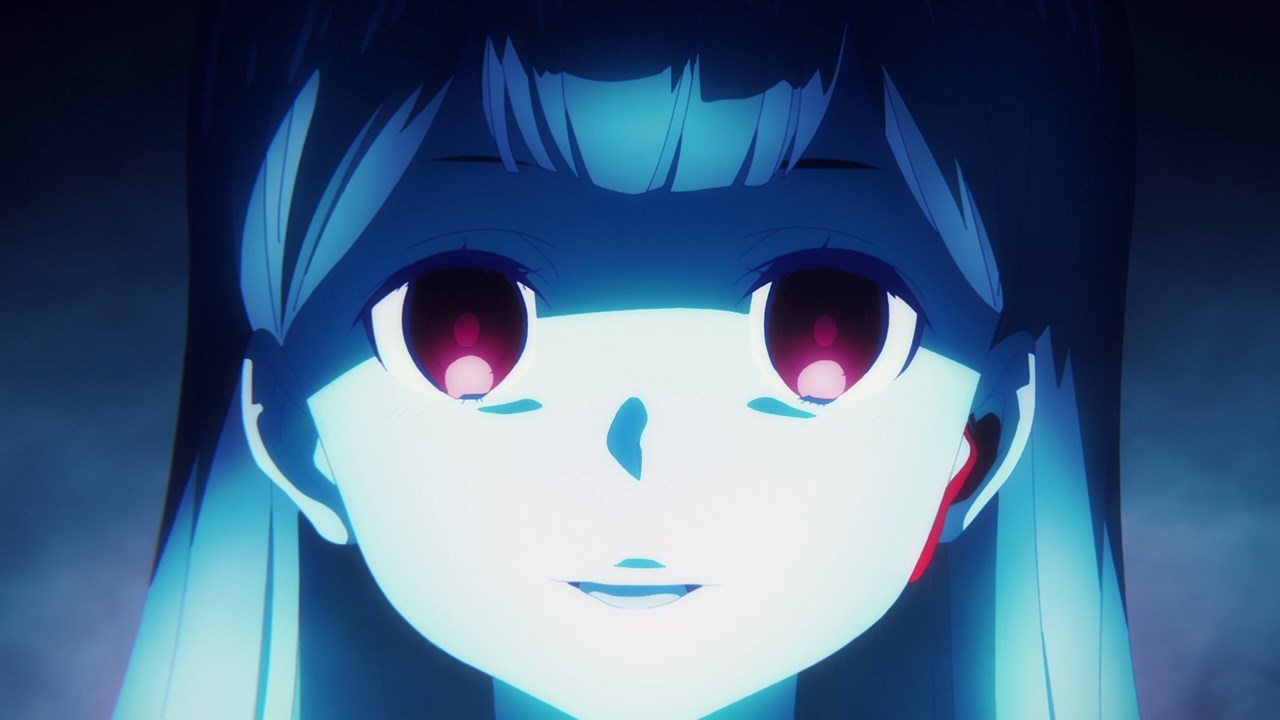 This includes Alicia where she’s dragging Gabriel down because y’know, she can’t forget the day she was stabbed in the left ear with a pen. Ugh, I can’t forget that scene! 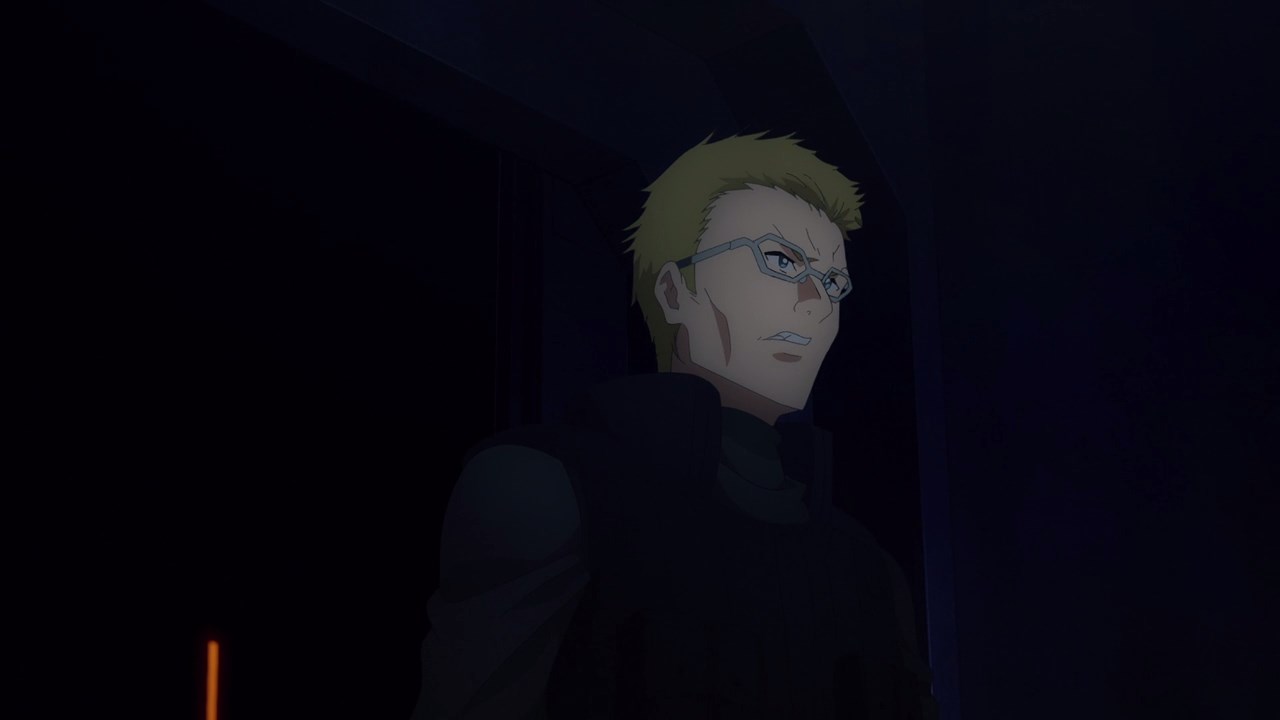 Anyways, Critter went to check both the captain and Vassago Casals. Unfortunately for Critter, he went there a bit too late. 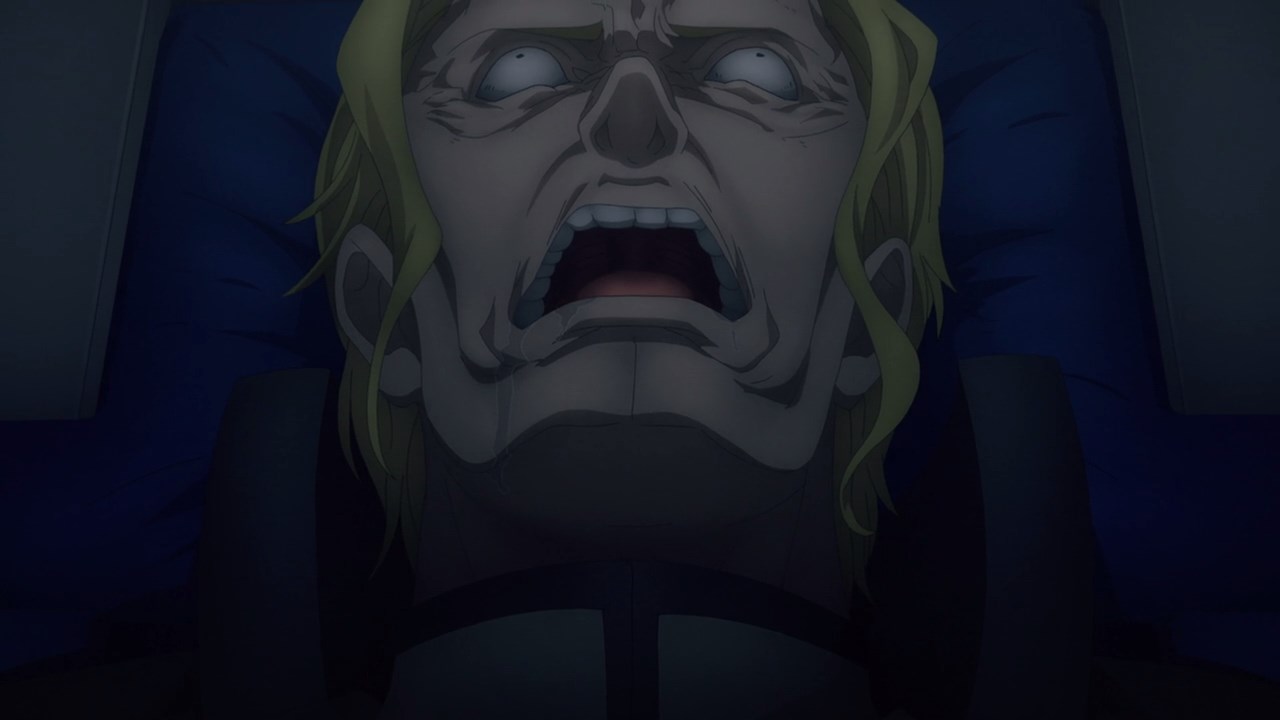 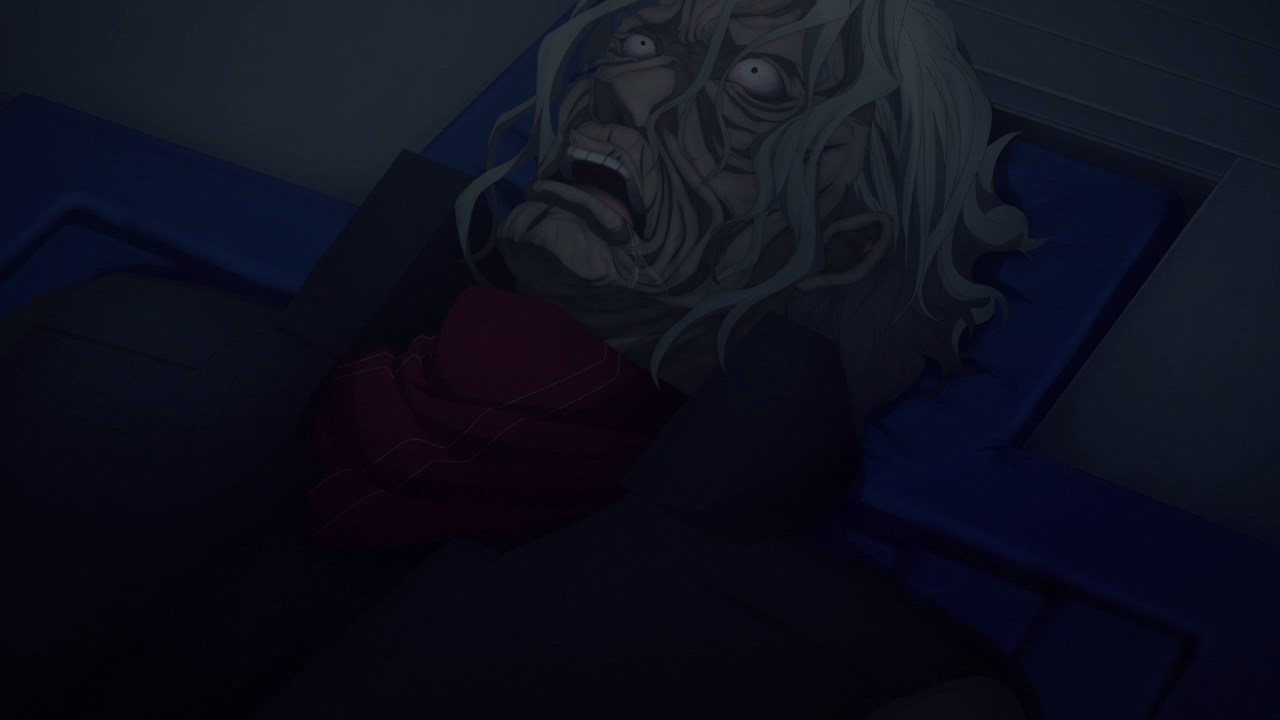 Turns out that both Gabriel Miller and Vassago Casals has died and it’s quite horrifying to see them.

Honestly though, they think that they’ll just return to the Underworld after losing their respective avatars, but that’s not the case as they suffered the same fate much like those victims from Sword Art Online. 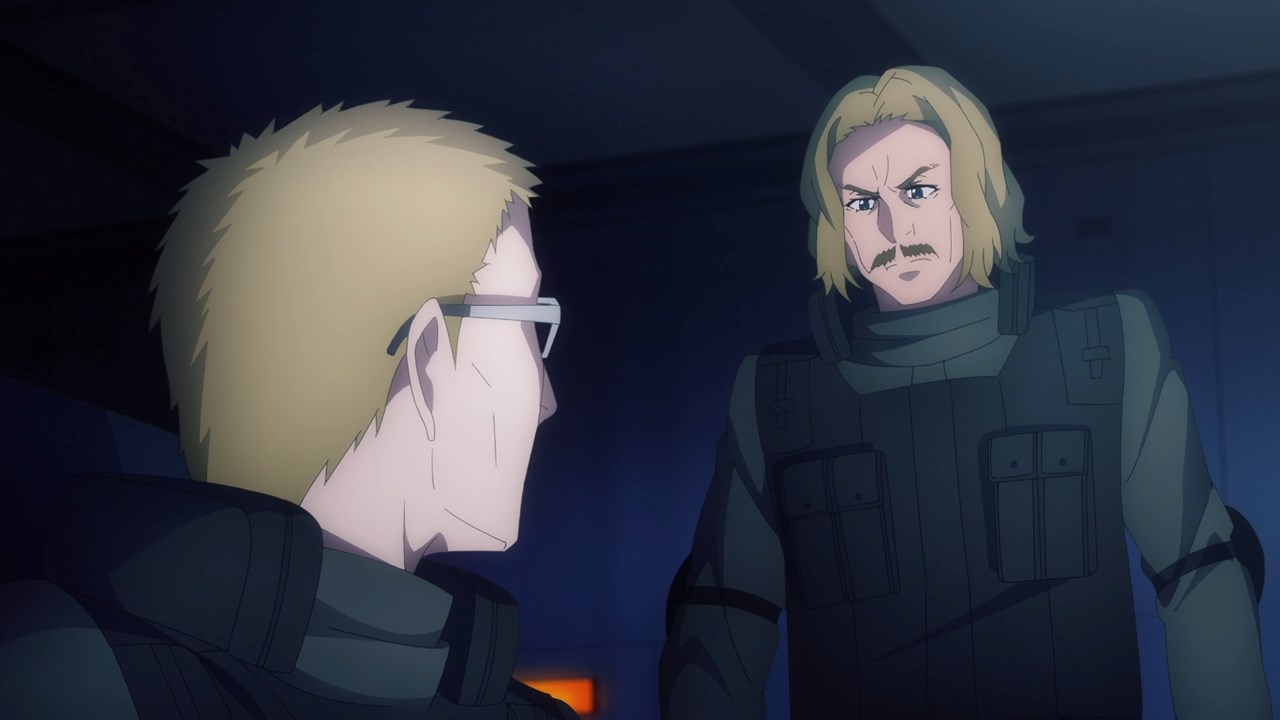 So with 3 of their crew dead, it appears that the soldiers from Glowgen Defense Systems are out of options as they have no other choice but to retreat.

Of course, they’re not gonna leave Ocean Turtle empty-handed though as Critter and the rest will have the last laugh… 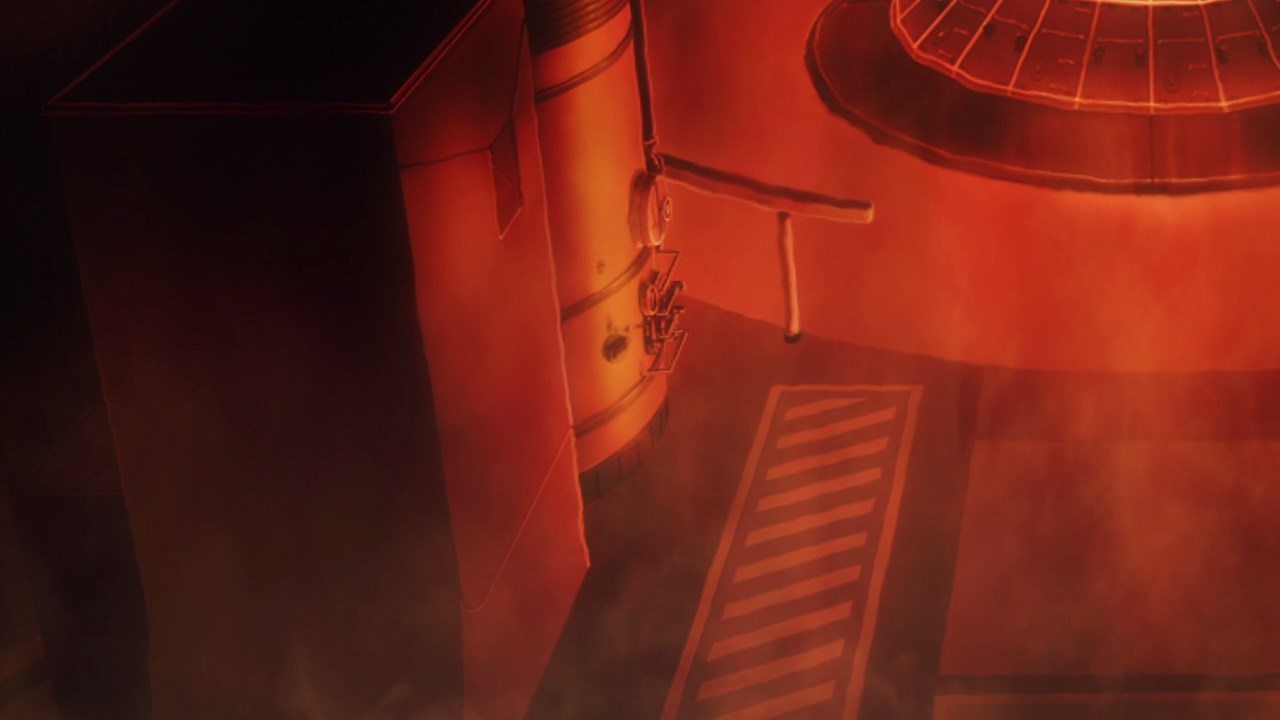 …by blowing up the floating facility with a plastic explosive being planted on a nuclear reactor. God, are these mercenaries insane? 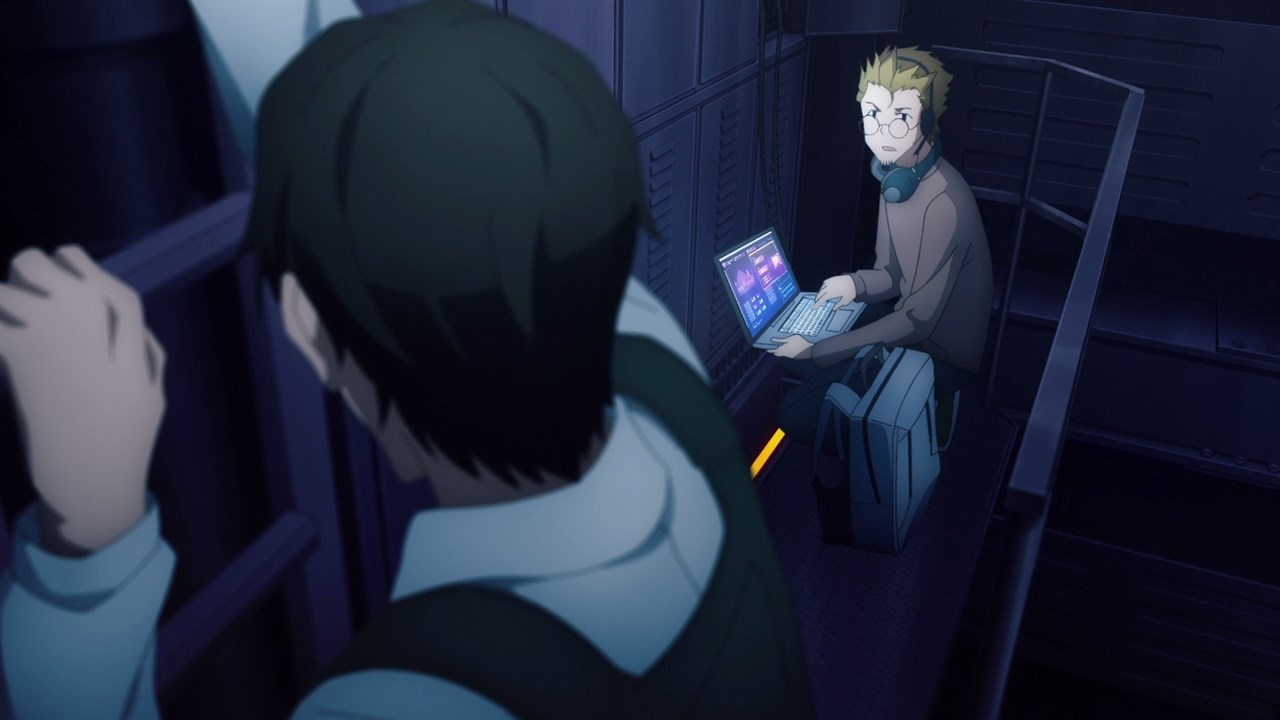 Still, someone will go anyway as Seijirou Kikuoka will go down there and remove the explosive by himself. 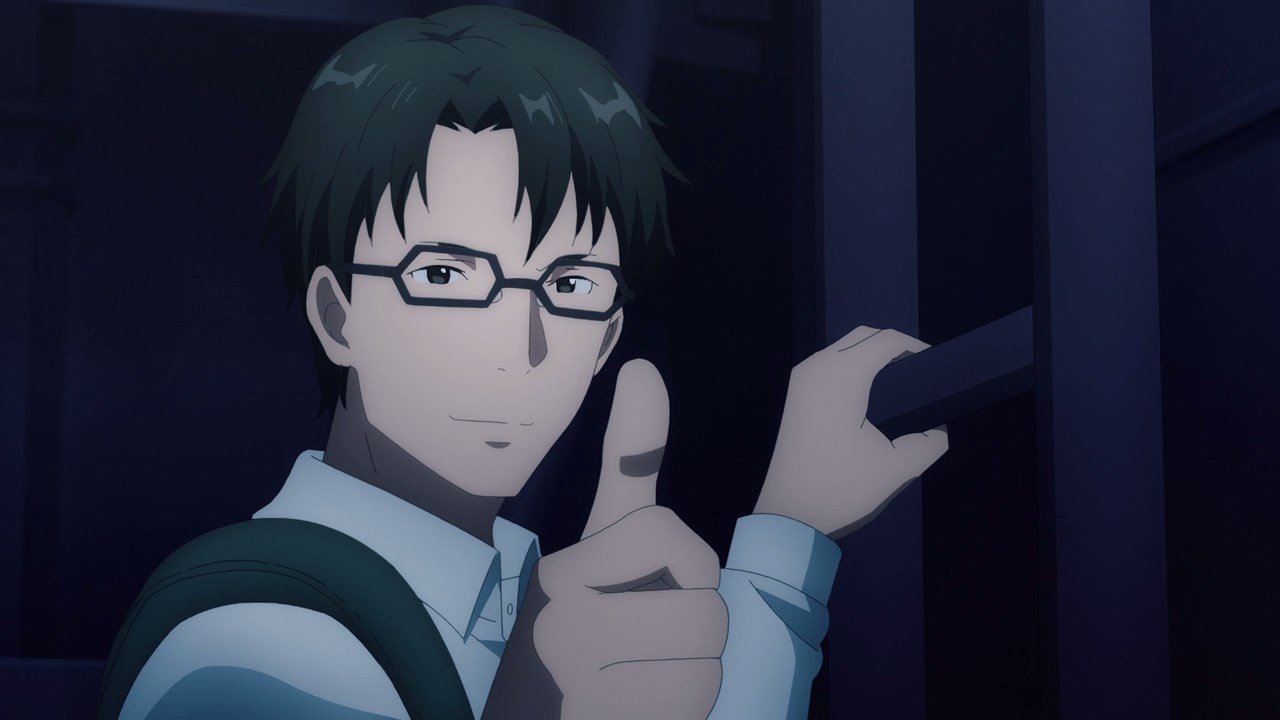 I mean, Kikuoka is confident that he’ll disarm the explosive, although I’m worried that Seijirou might not make it there due to his injuries. 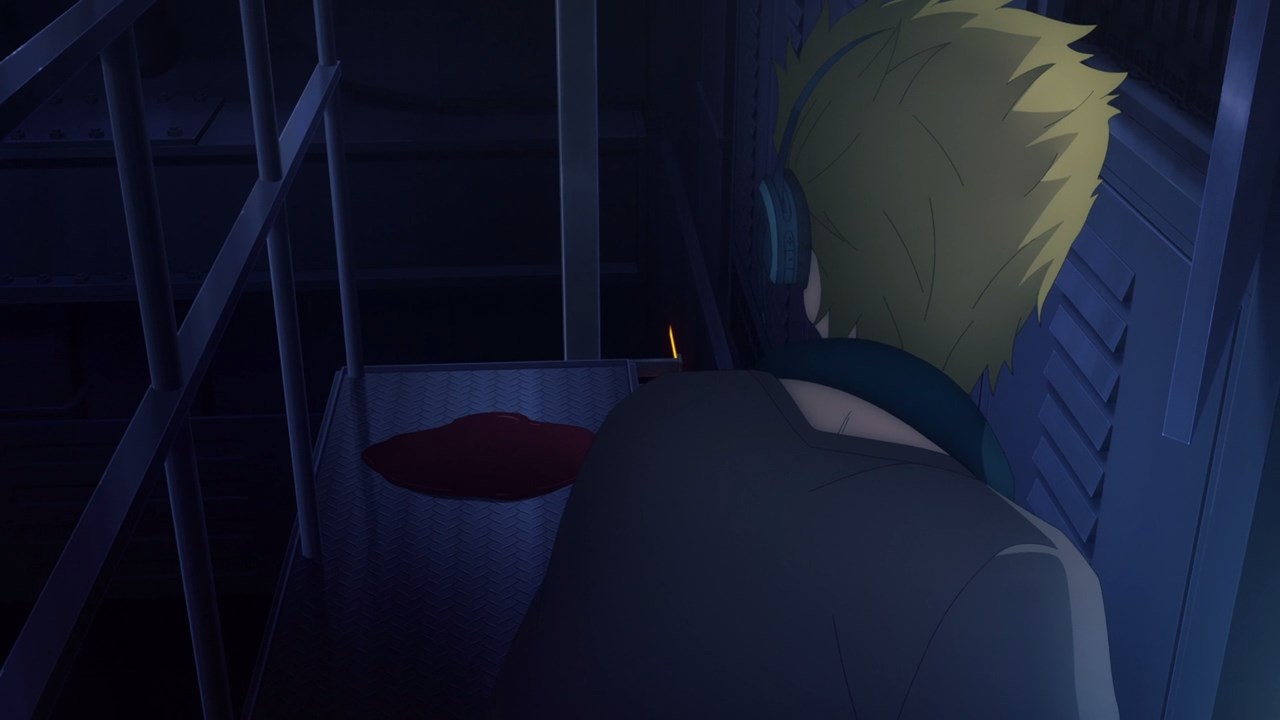 And speaking of Kikuoka’s injuries, it appears that his chest wound got worse that Takeru Higa is worried about him. Man, Seijirou should have a thicker body armor. 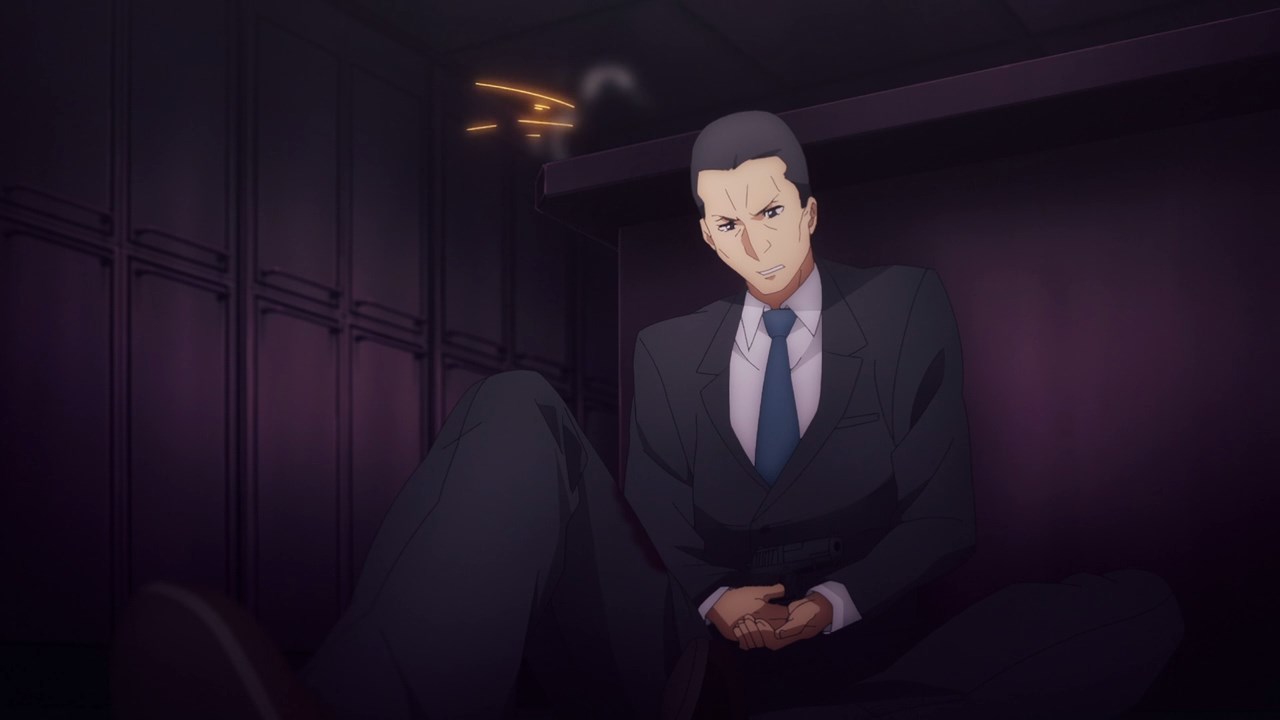 Meanwhile, here’s Nakanishi where he was supposed to go inside the engine room, but someone is guarding the area that Nakanishi got shot in the hip where I suspect that one of Critter’s teammates stay behind. 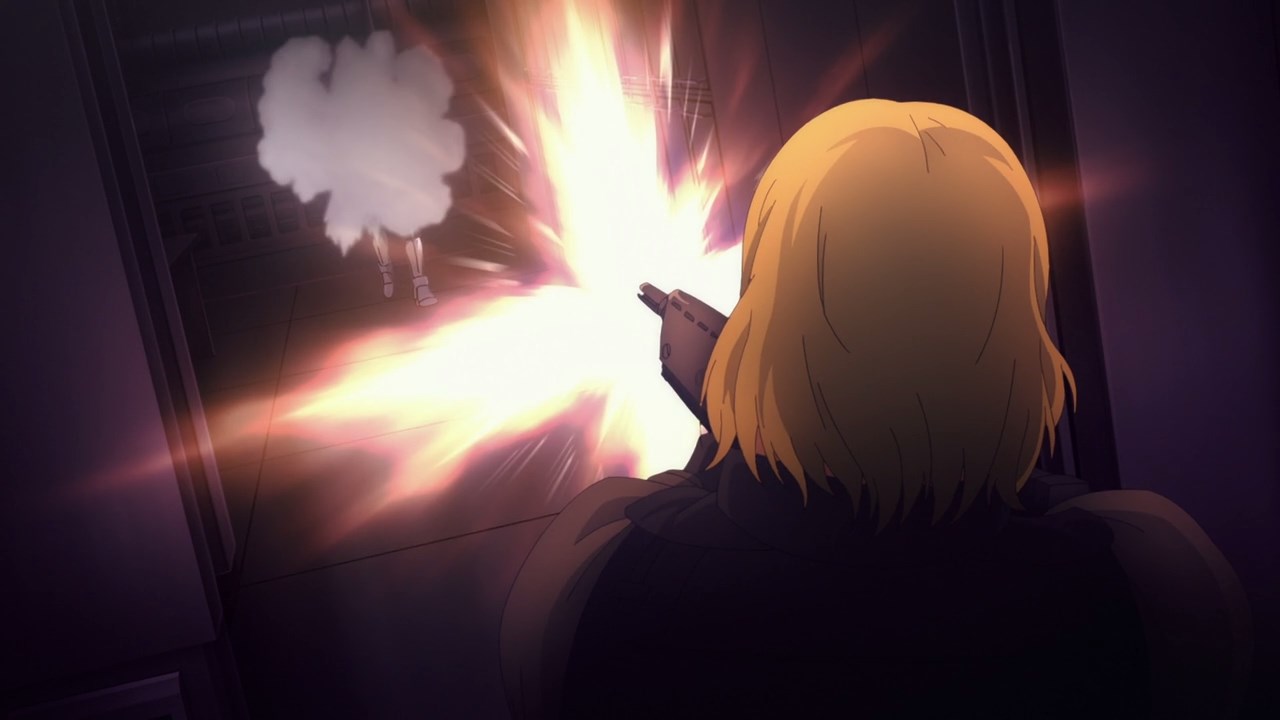 Speaking of Critter’s teammates, here’s Hans where he’s confronted by some machine who refused to go down. 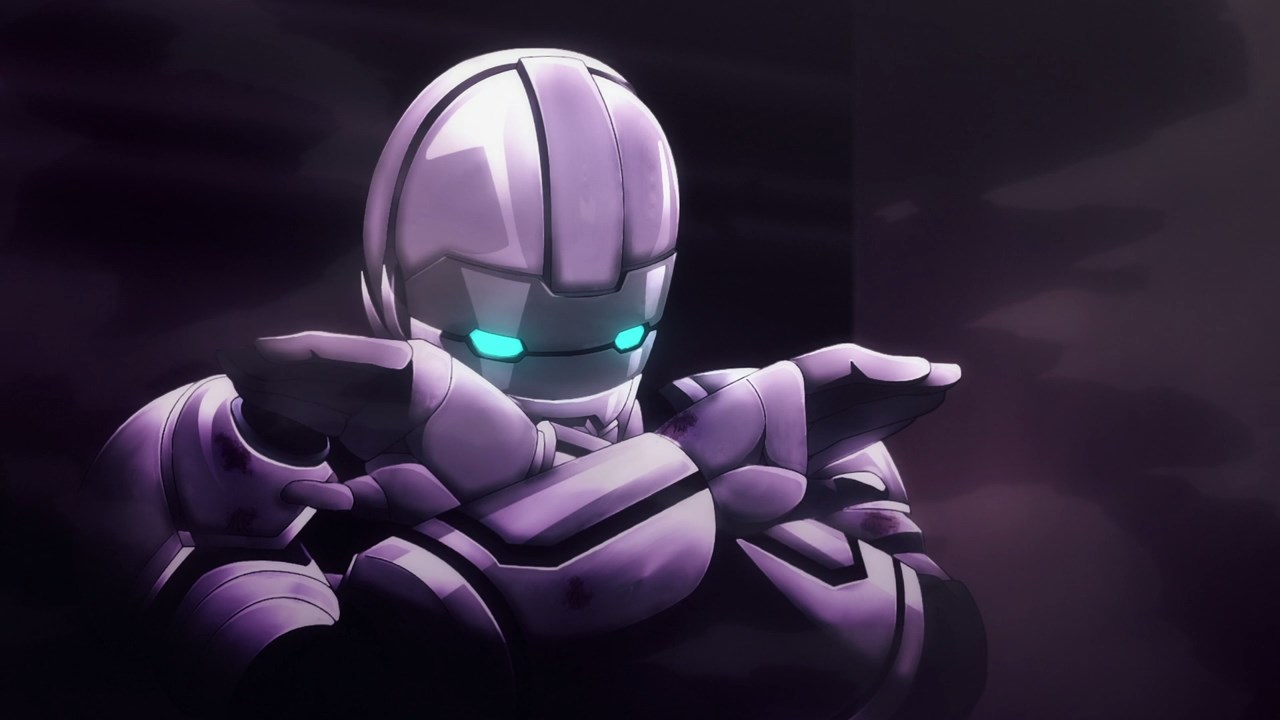 Said machine is Niemon, one of Higa’s robots where it shows its durability compared to Ichiemon. Not only that, but Niemon contains the soul of Akihiko Kayaba. 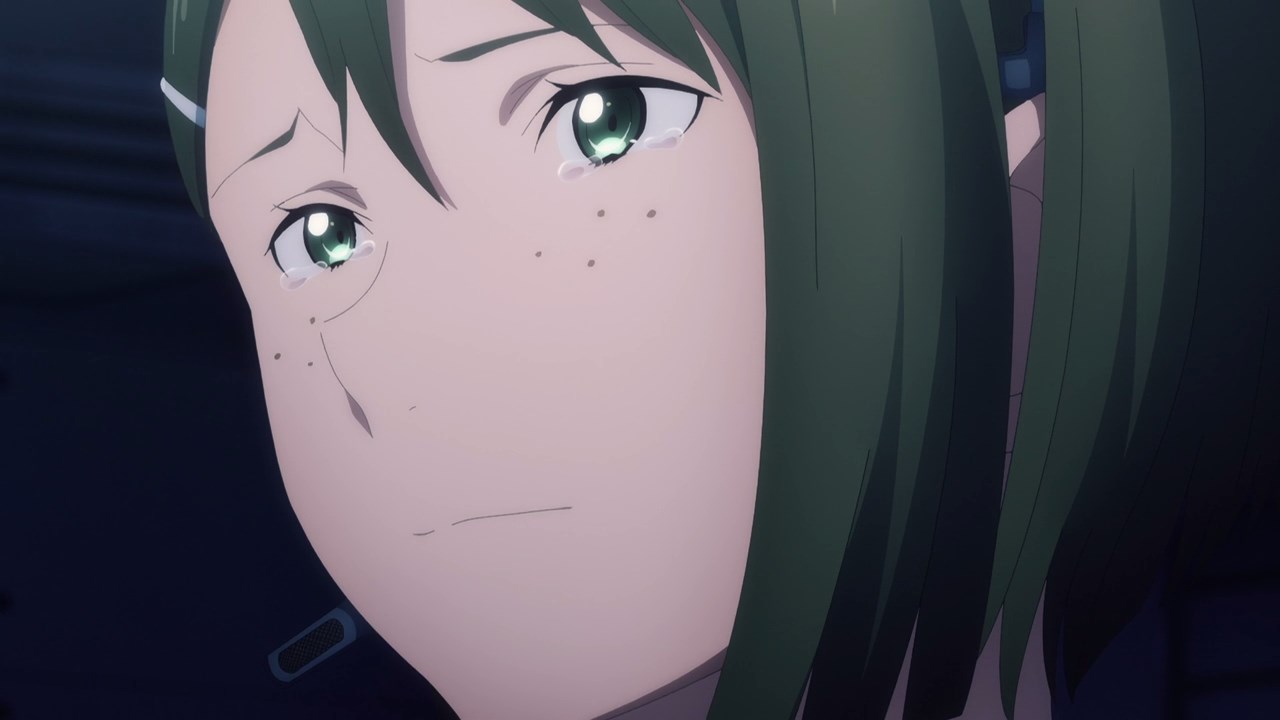 For Rinko Koujiro, she was ecstatic that Kayaba’s soul has returned to help Kirito and Asuna.

Still, his mechanical body might break down due as Hans is currently bringing Niemon down with assault rifle fire. 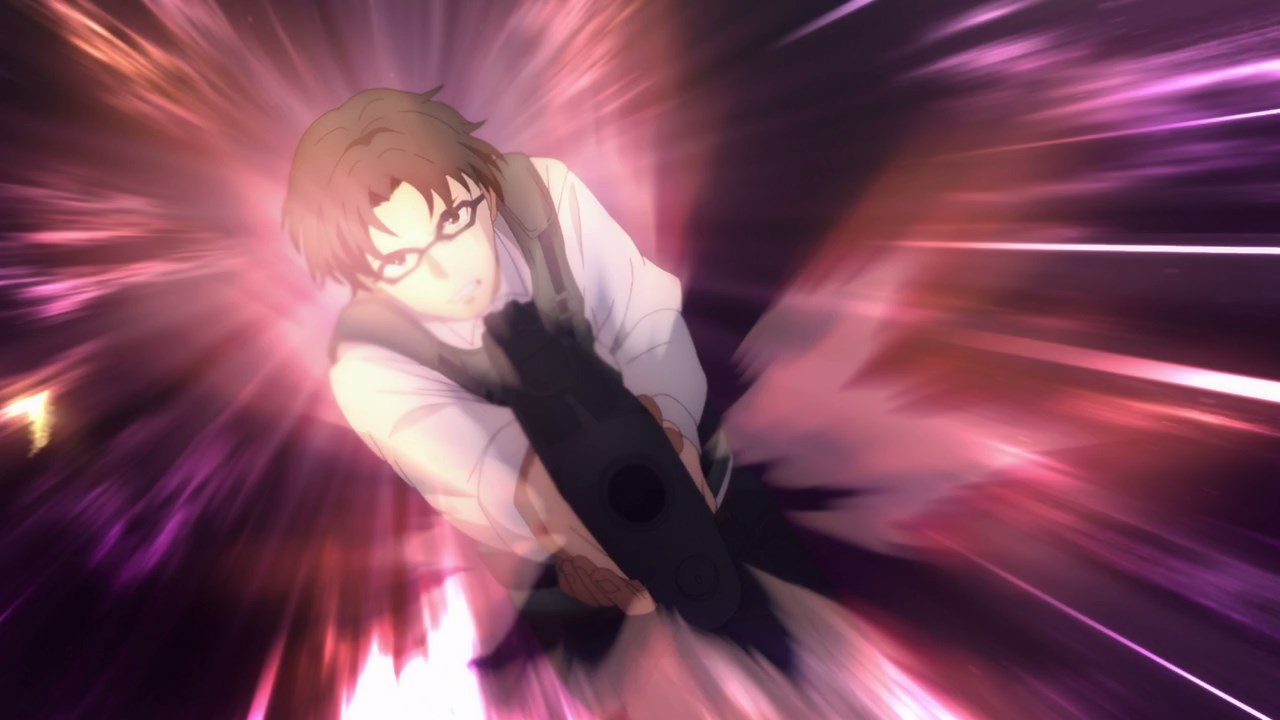 Fortunately, Seijirou Kikuoka has arrived to save the day as he shoot down Hans. Let’s hope that he shoots that mercenary in the head. 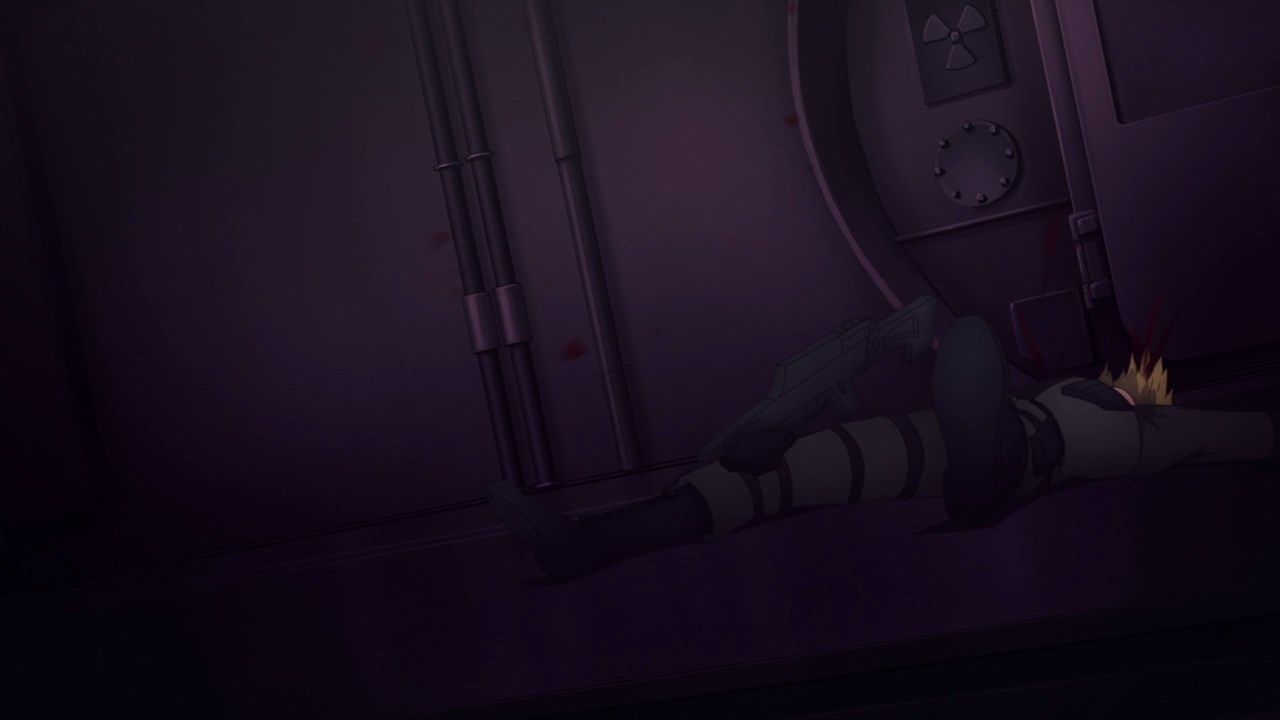 Luckily, Hans went down as Kikuoka shoot him in the head. Honestly though, if Hans wants to defend the engine room, he should wear his helmet at all times. 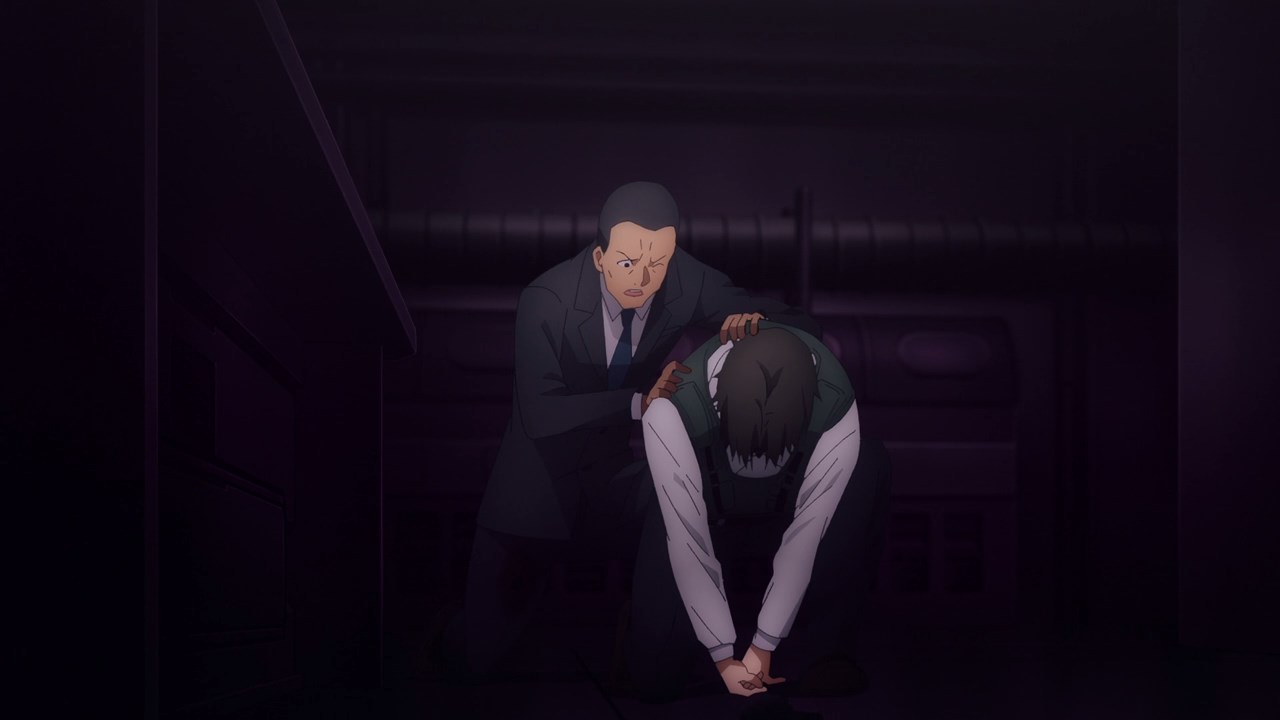 As for Seijirou Kikuoka however, it appears that he got groggy as his injury got worse. While Nakanishi managed to catch him, I’m worried that Kikuoka might die due to his injuries. 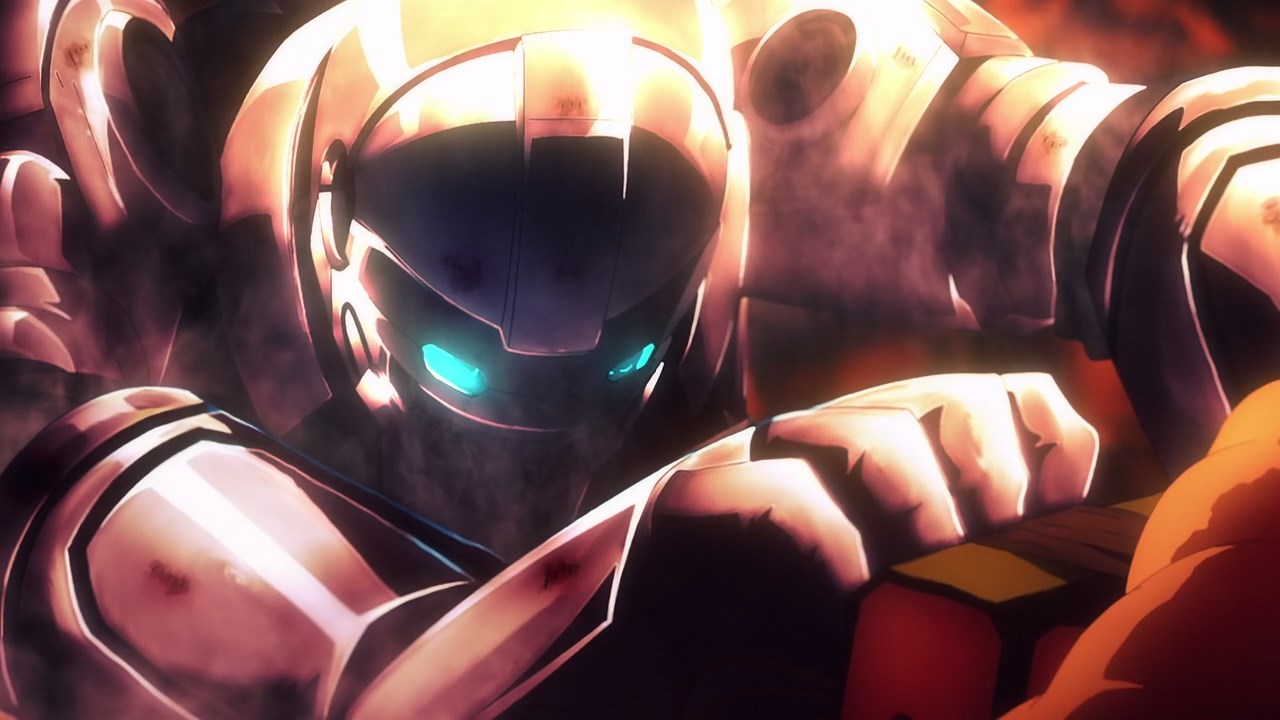 But now, let’s go back to Akihiko Kayaba where he went inside the engine room and started disarming the explosive with his bare mechanical hands.

There’s no time for him to cut a specific wire as Kayaba will have to pull the detonator out of the explosive. Of course, I’m worried that pulling it might detonate the bomb. 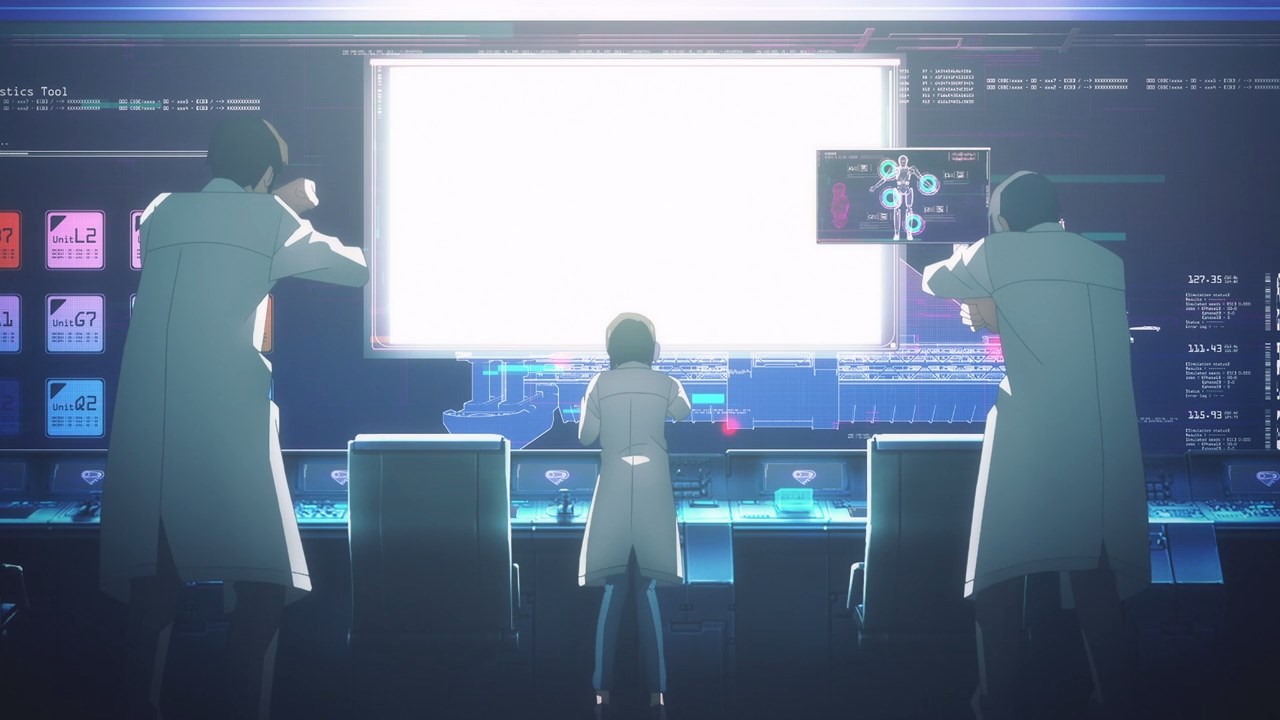 In any case, it’s time for the moment of truth as the engine room is engulfed in a white flash.

Will Kayaba/Niemon managed to disarm the explosive, or will Ocean Turtle sink into the bottom of the ocean? 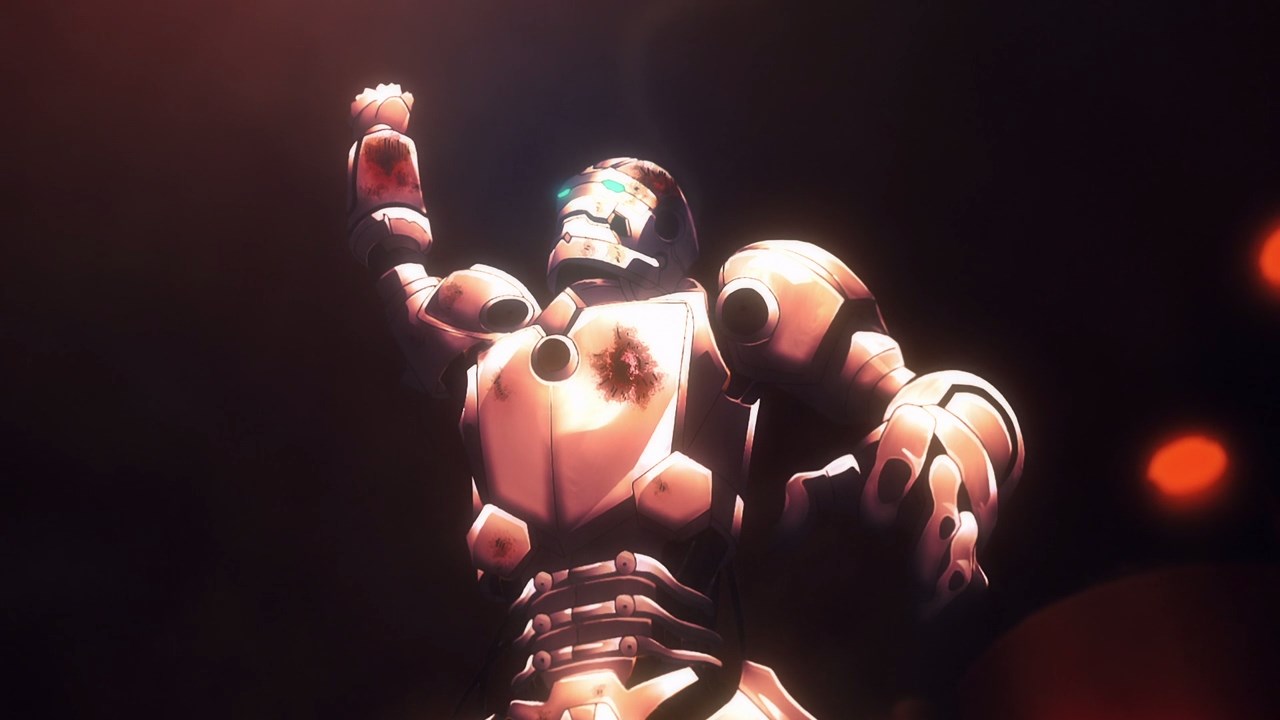 Well, Akihiko Kayaba succeeded on disarming the bomb. Sadly, his soul will take a rest once again now that Kayaba is done saving everyone inside the Ocean Turtle. 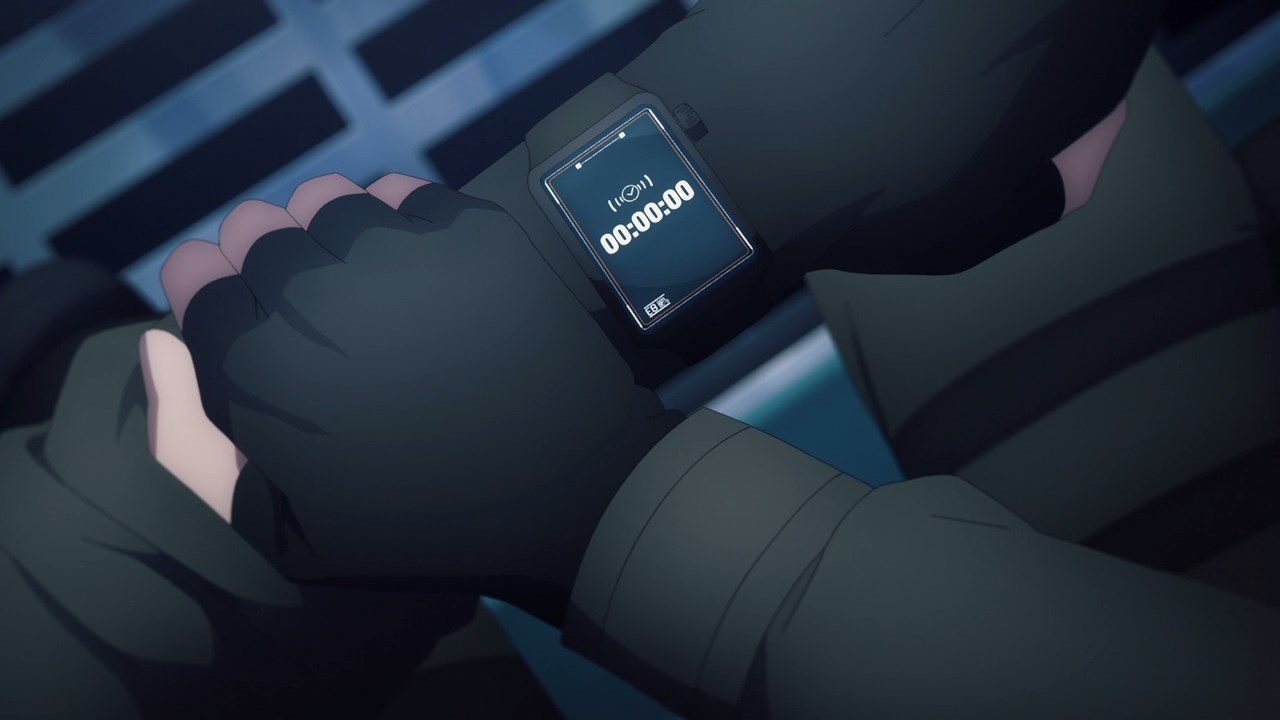 And because of Akihiko’s interference, Glowgen Defense Systems have not only failed to get Alice’s Lightcube, but also failed to blow up Ocean Turtle as they retreat in shame. 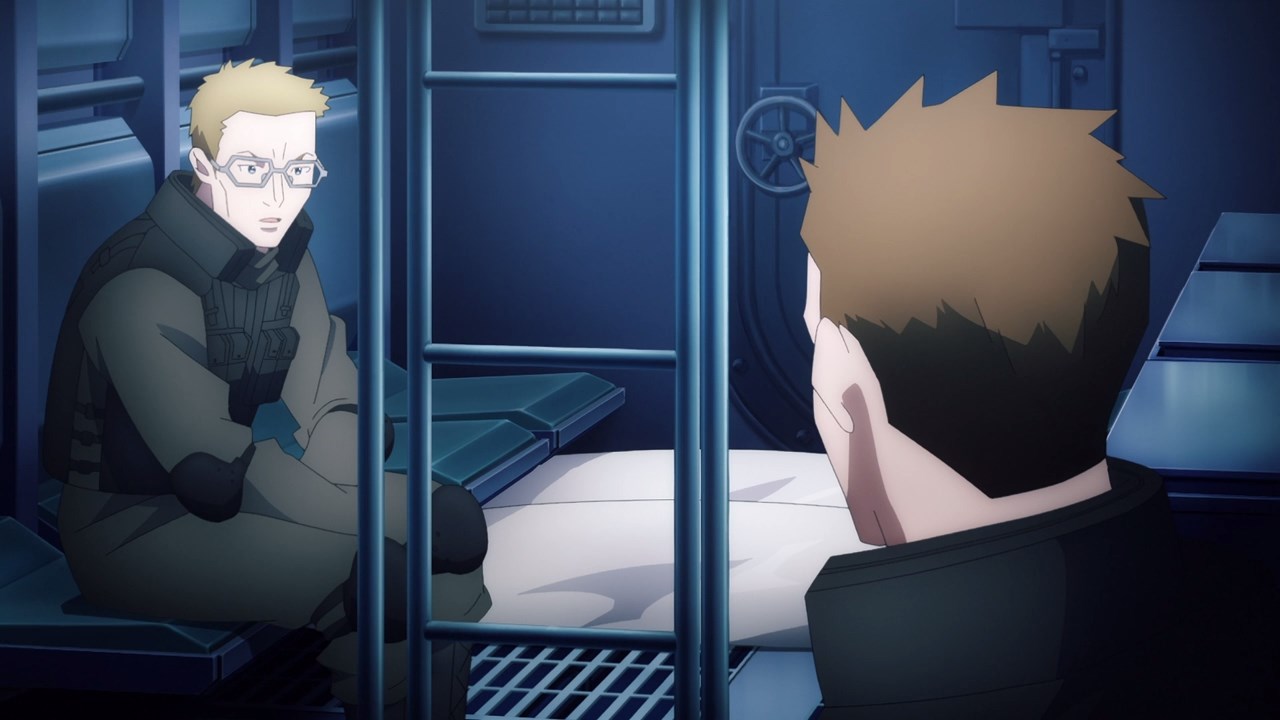 On the other hand, it seems that Critter is concerned that there’s one body missing. While his teammates managed to retrieve Gabriel and Brigg’s corpses, it seems that they forgot to take Vassago’s body inside the submarine.

Oh boy, I smell something bad coming up on the next episode as there’s no way Vassago Casals would return from the dead. 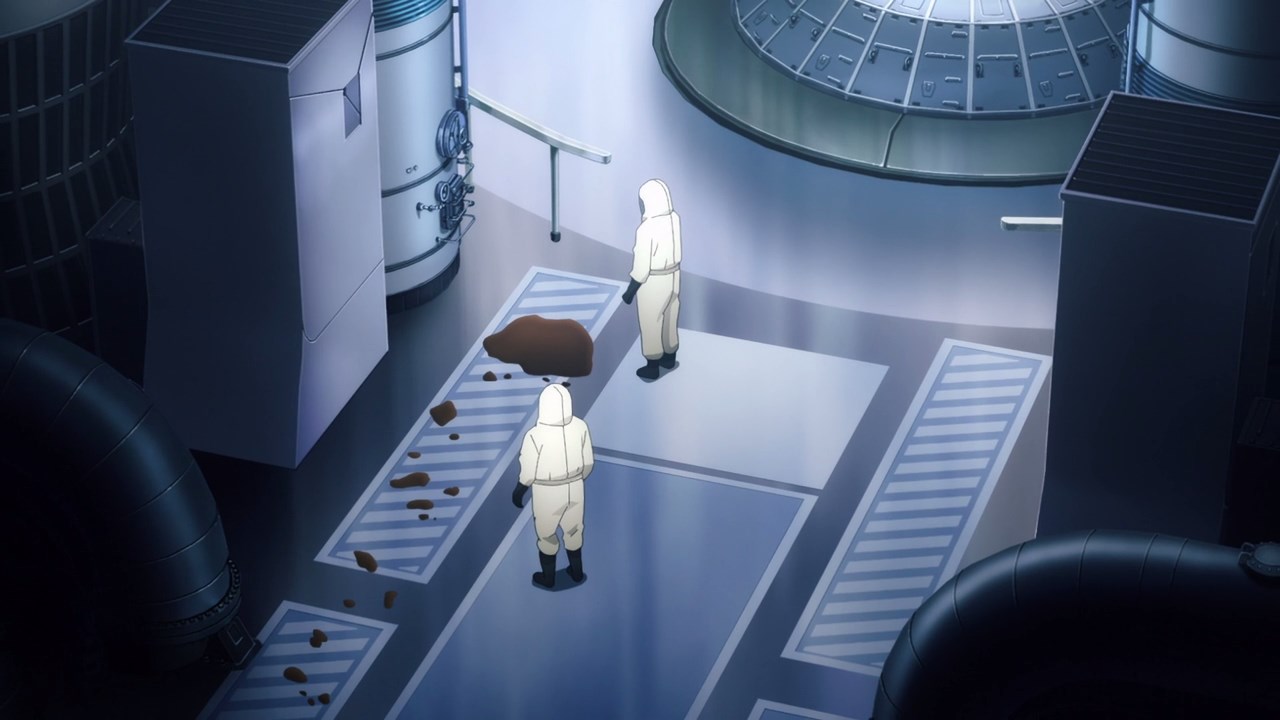 Oh and it gets even weirder as Niemon is nowhere to be found. Please don’t tell me that Vassago hijack Niemon?

Anyways, I’ll see you next time as we’re reaching the ending of Sword Art Online: Alicization! Let’s hope that Kirito and Asuna will find a way to get back into the real world.