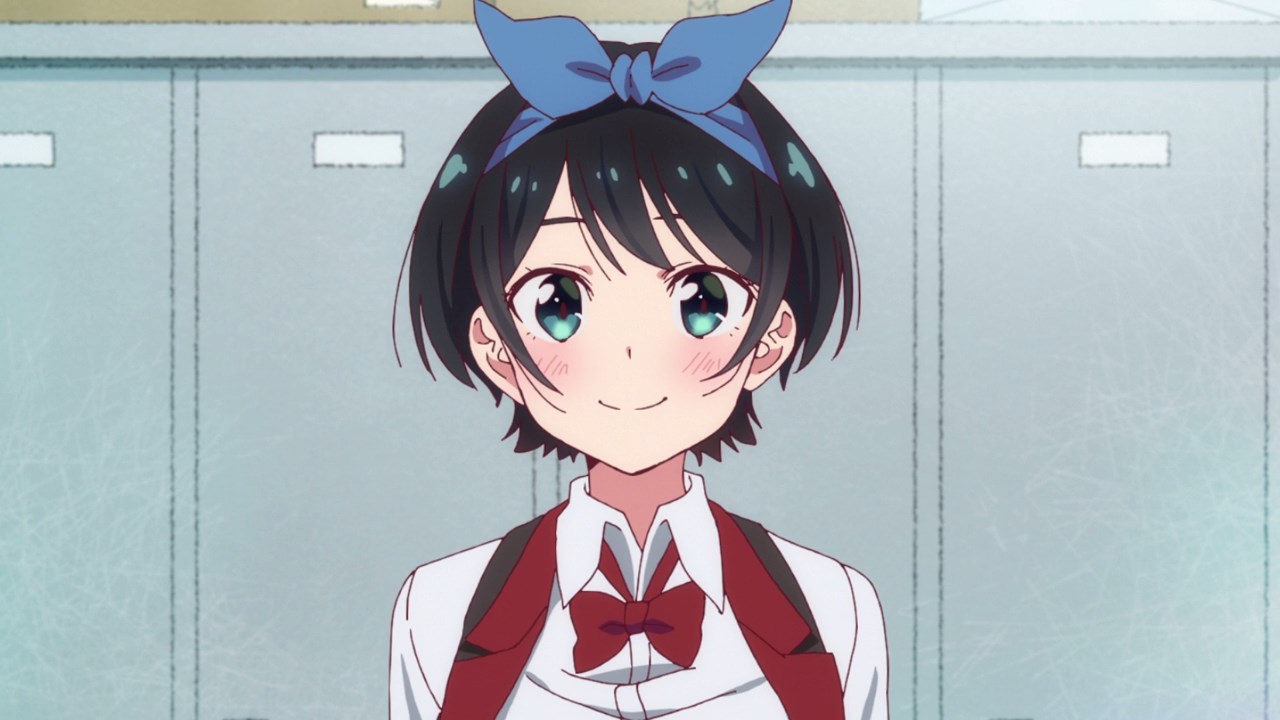 I have to say that it was a good decision to leave the rental girlfriend business, although I feel that Ruka-chan might go back if she’s running short of money. 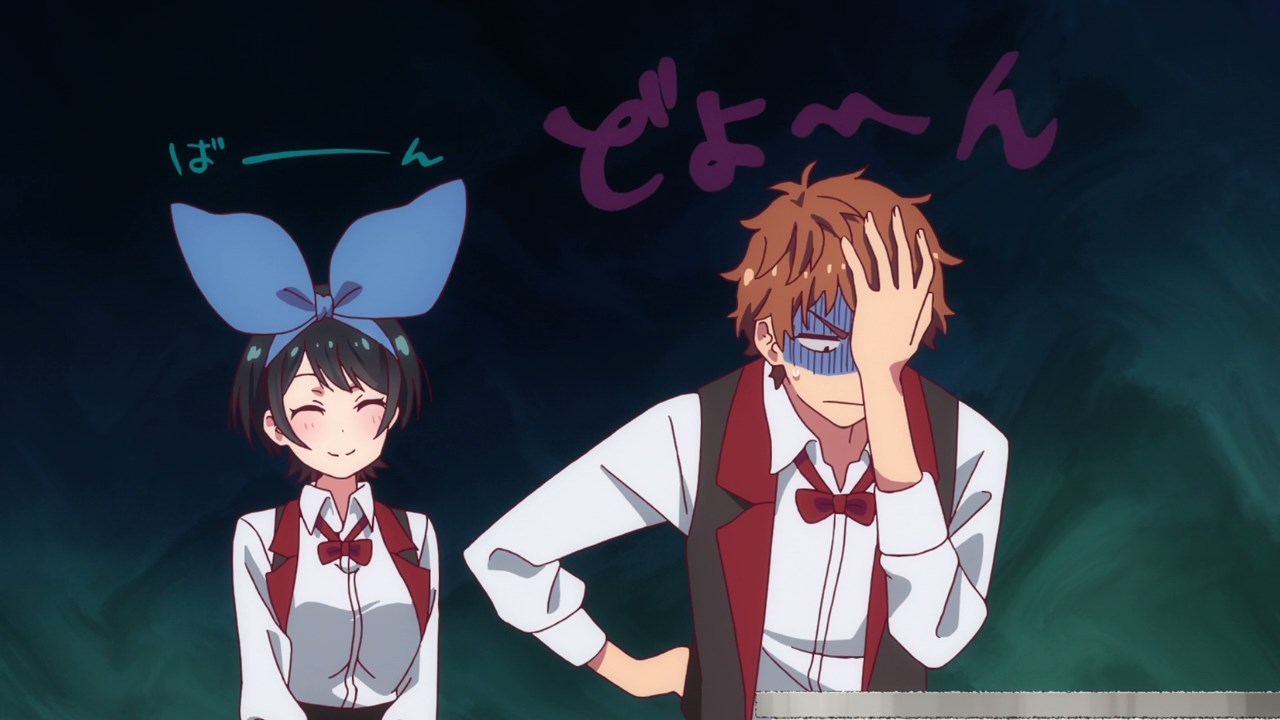 Still, the fact that Sarashina is here means that Kazuya Kinoshita is scared that his secret will be revealed to everyone ’cause you have Ruka-chan constantly doting on Kazuya.

And speaking of Sarashina, notice that her bow tie got larger. Then again, it’s just that I’m seeing an illusion on Ruka’s bow tie. 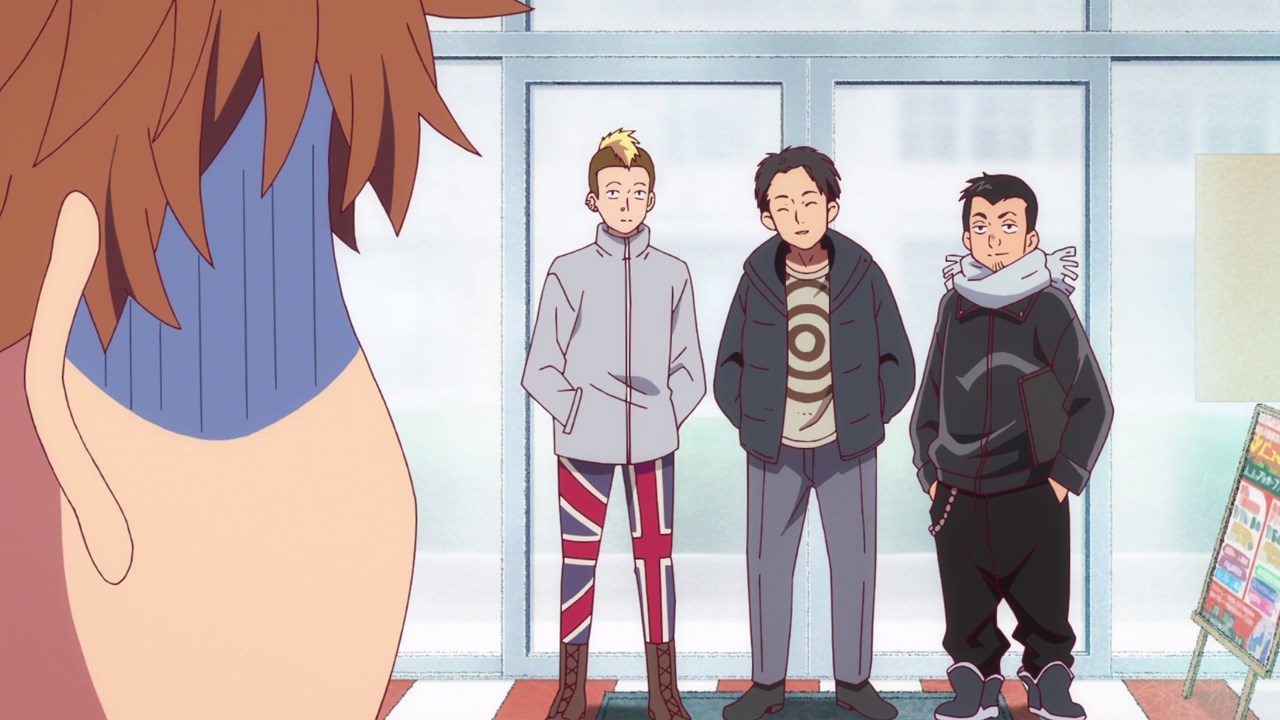 Meanwhile, Yoshiaki Kibe and his friends are here to see their buddy working at a karaoke bar.

Of course, they’re gonna give him hell where Kibe and the rest will order expensive meals. Just kidding… 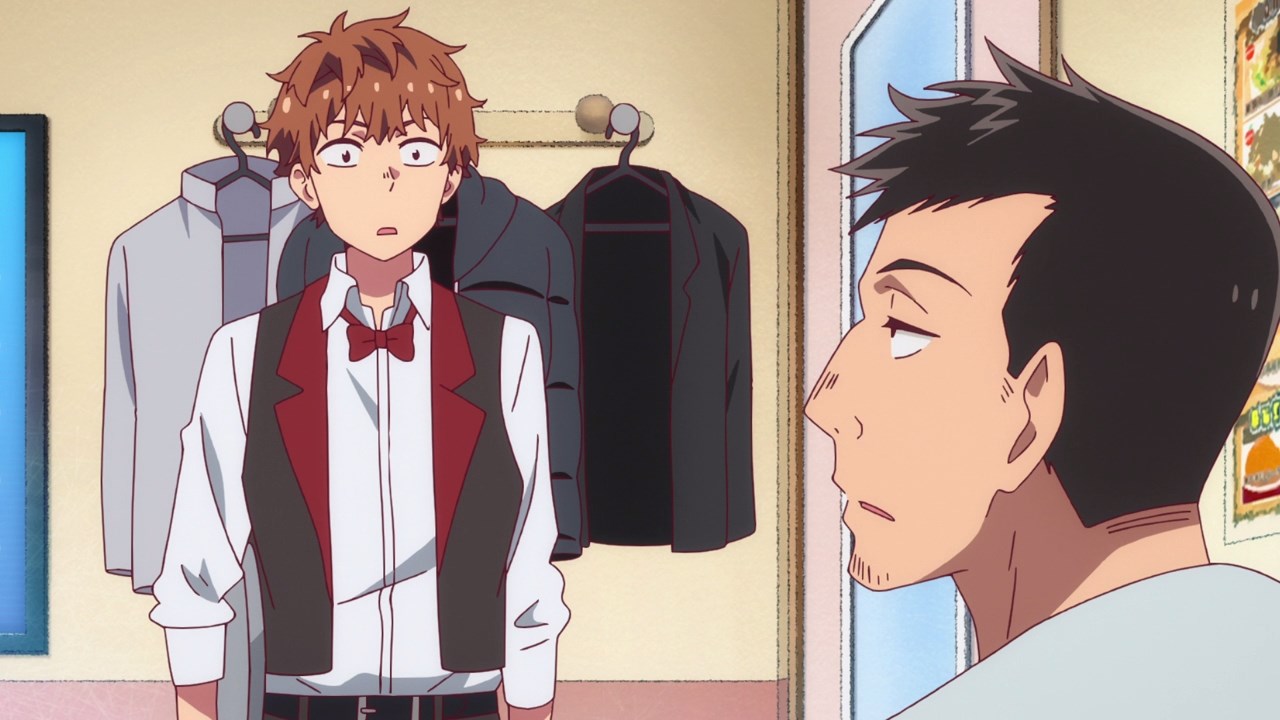 One more thing, Yoshiaki Kibe told Kazuya Kinoshita that Shun Kuribayashi is not feeling well lately. In fact, he’s making depressing tweets that Kibe is really concerned towards his friend. 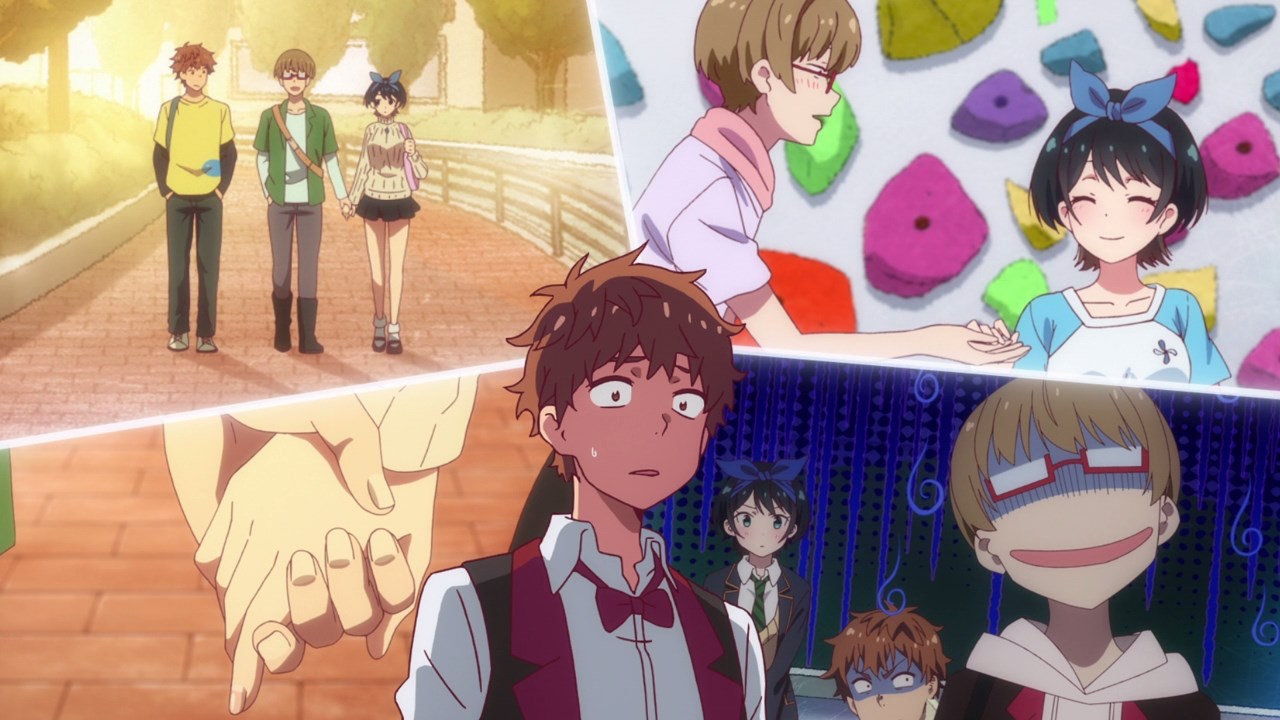 Well, you can blame Sarashina for breaking up with him since she’s a rental girlfriend first and foremost. Still, I hope that there’s a way to help Kuribayashi out. 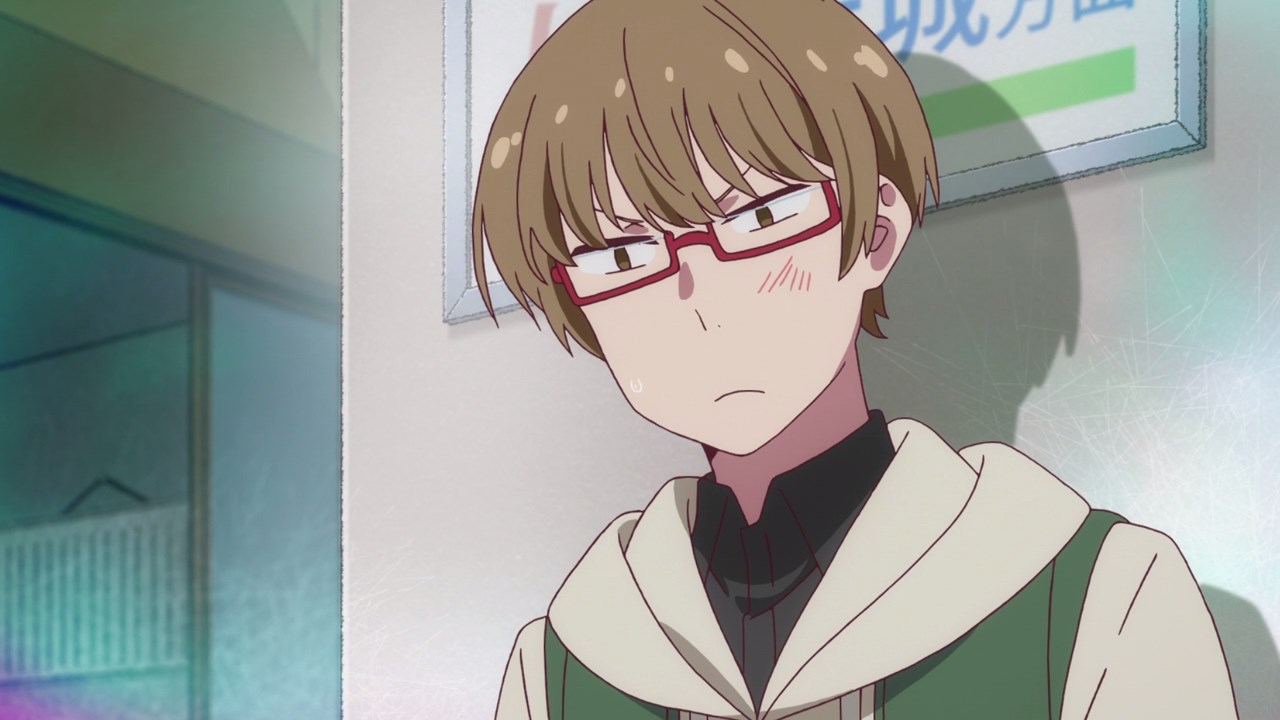 But speaking of Shun Kuribayashi, he’s still angry that Ruka Sarashina dumped him, all while cursing at normies for having a good date, some went to a love hotel which pisses him more.

Man, I feel bad towards Kuribayashi, although I still hate Kinoshita for being an idiot like renting a girlfriend after that big break-up with Mami Nanami. 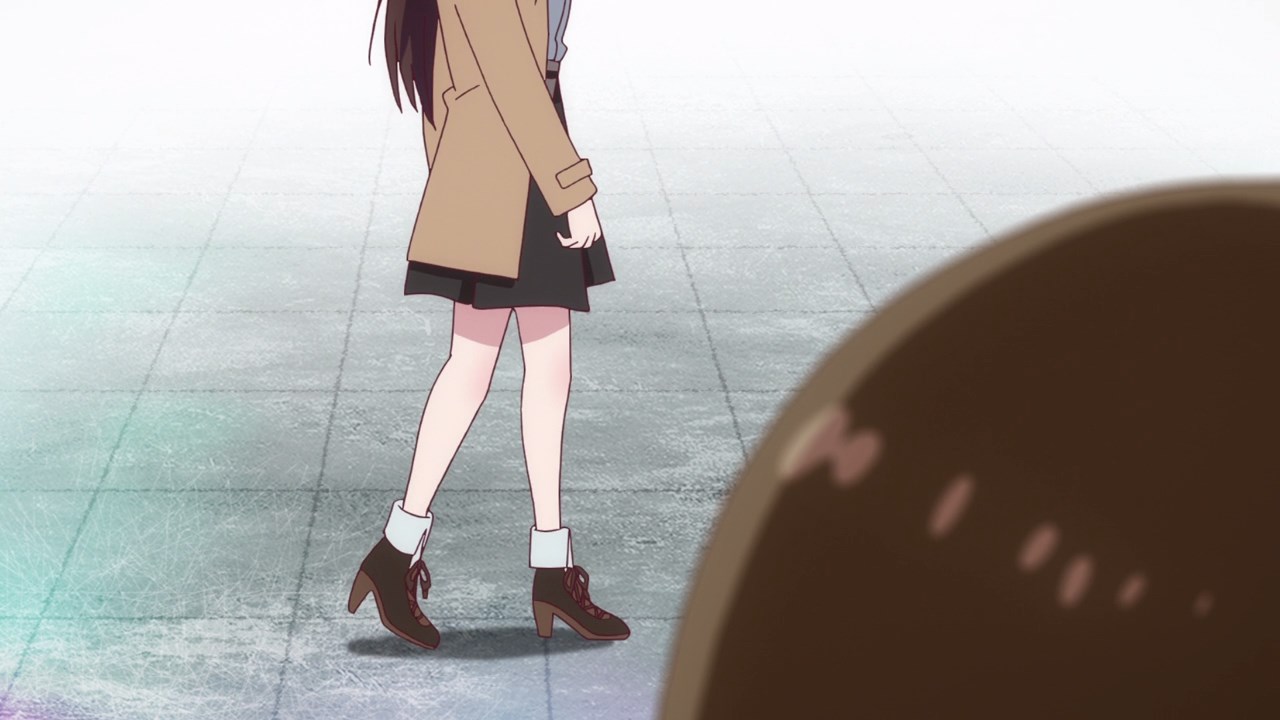 Anyways, it looks like a certain woman has arrived to pick Shun up. Who could this woman be? 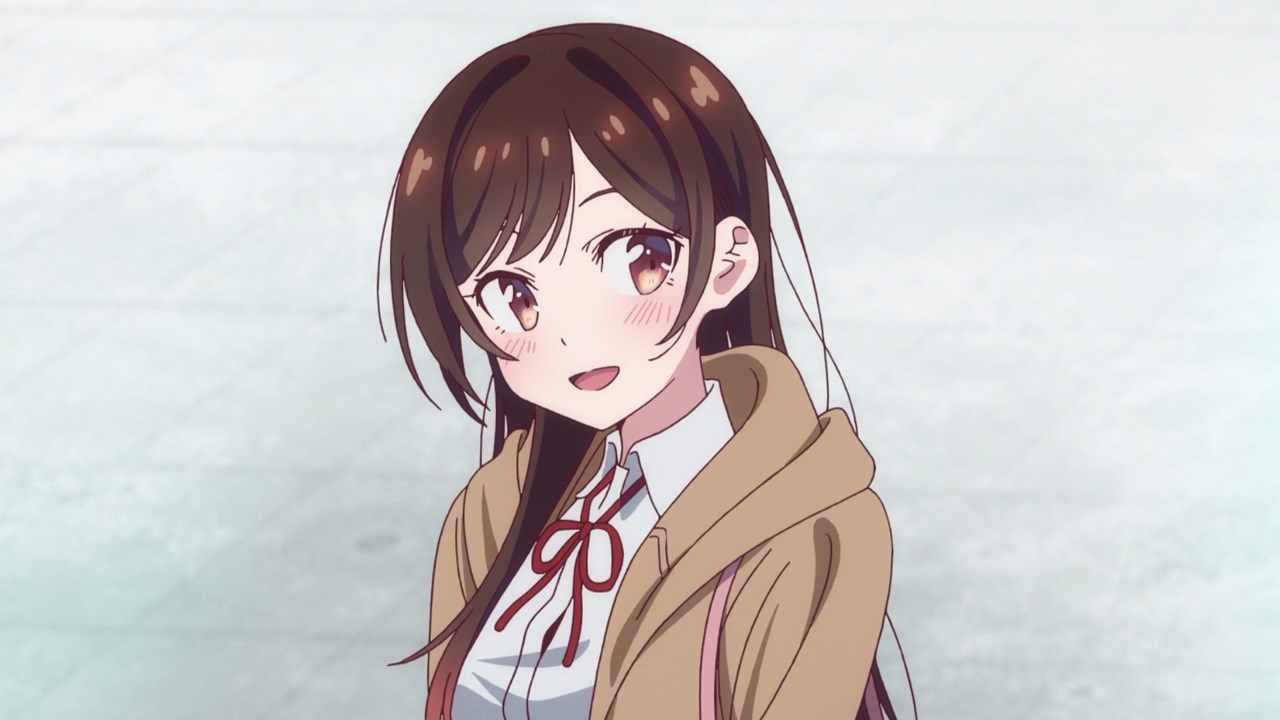 Okay, is this considered cheating? No, because Chizuru is doing her job as a rental girlfriend. 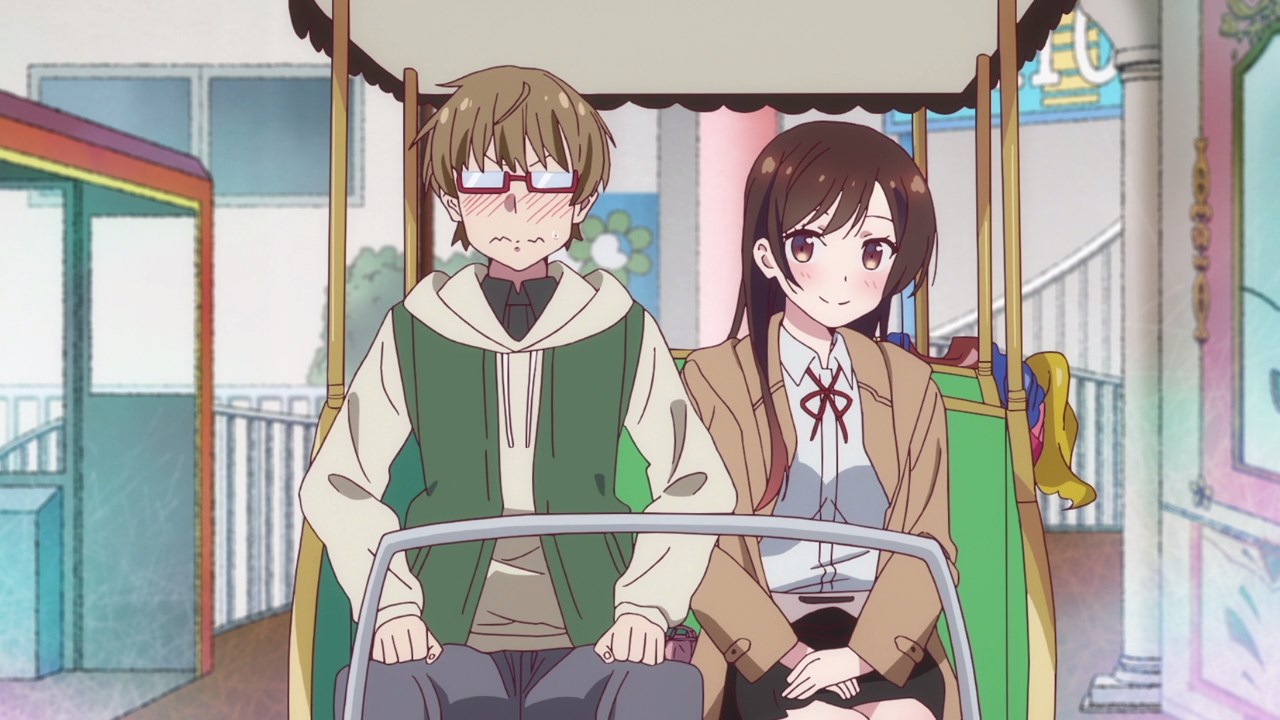 Still, Shun is puzzled ’cause he thought that Chizuru is Kazuya’s actual girlfriend, of course the truth is very painful to know.

While Kuribayashi will learn the truth someday, it’s time for him to enjoy his day with his rental girlfriend. But afterwards, Shun will have to pay Chizuru. 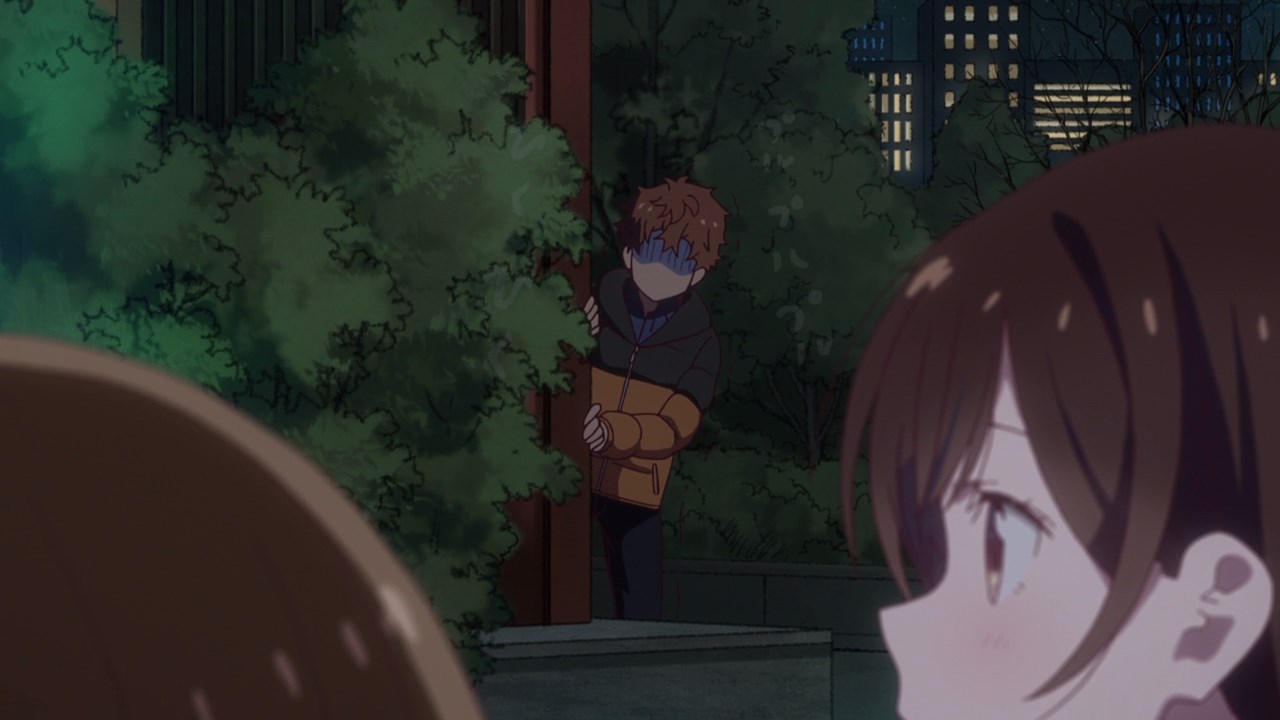 Except that it turns out, Kazuya Kinoshita is the one who paid the bill on his behalf, using his money that he got from his part-time job.

Okay Kinoshita, while it’s okay to use that money to help Kuribayashi, I think you should save a little bit of cash for yourself. Also, looks like the jig is up as Kazuya revealed that he’s actually renting Chizuru as a girlfriend. 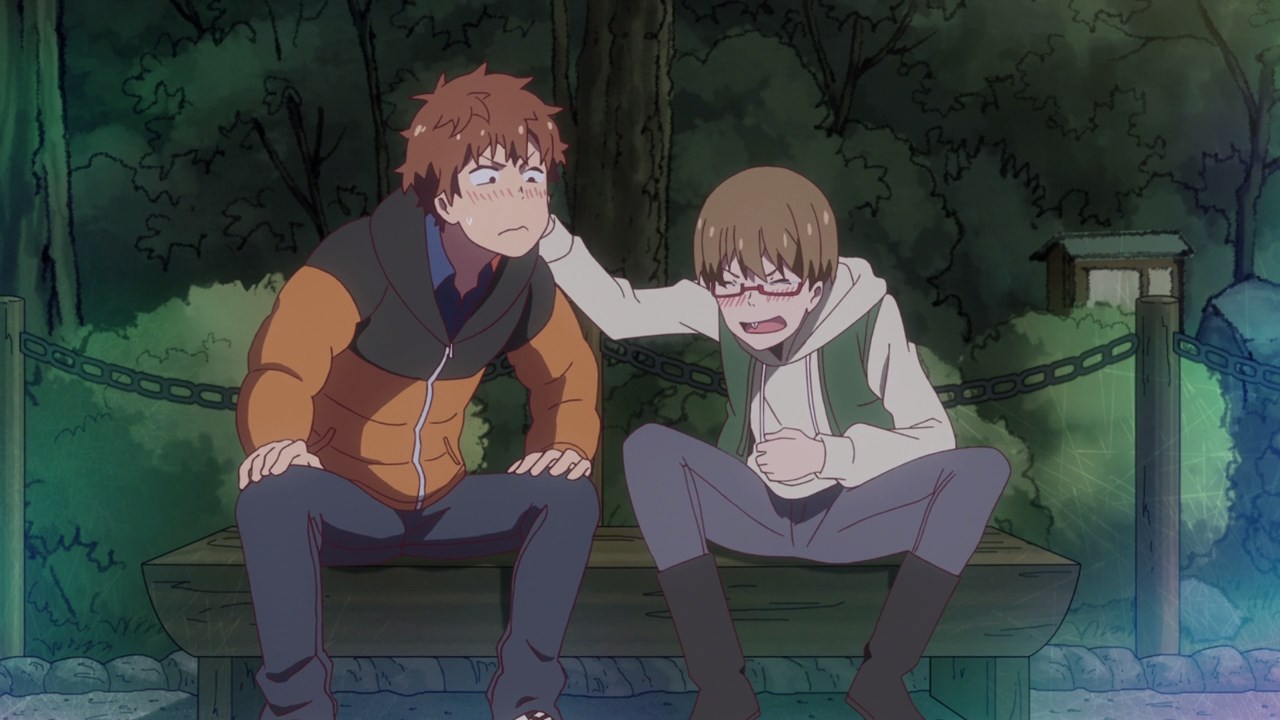 But yes, looks like Shun Kuribayashi knows that Kazuya Kinoshita rented Chizuru as a girlfriend, much like how he did it towards Ruka Sarashina.

Of course, I fear that Shun might tell everybody regarding Kazuya’s fake relationship but you know what, I believe that Kuribayashi will keep his secret for the time being until Kinoshita told everyone about it.

One more thing, I hope that Shun Kuribayashi won’t learn that Ruka Sarashina is pursuing Kazuya Kinoshita. That would be a problem if he found out. 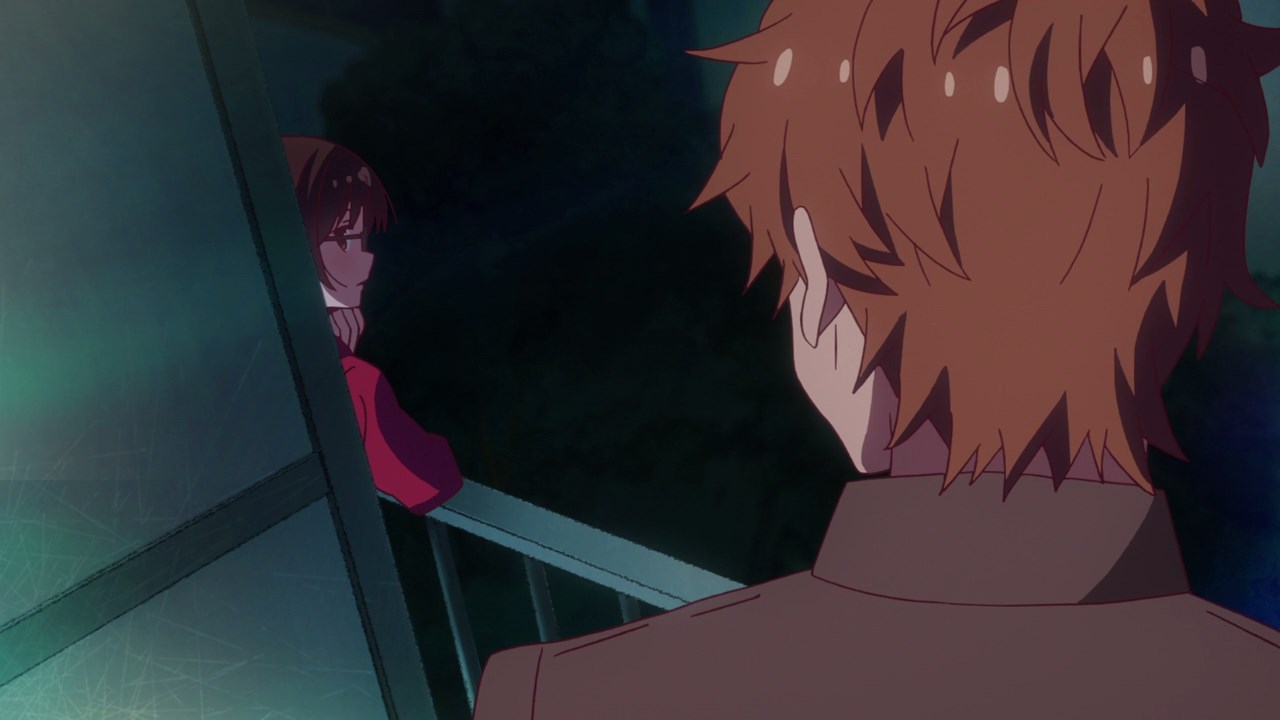 One last thing before we go, Chizuru Mizuhara wants Kazuya Kinoshita to do a favor by dating a rookie rental girlfriend. Oh, and there’s no need to pay her up ’cause it’s a trial basis. 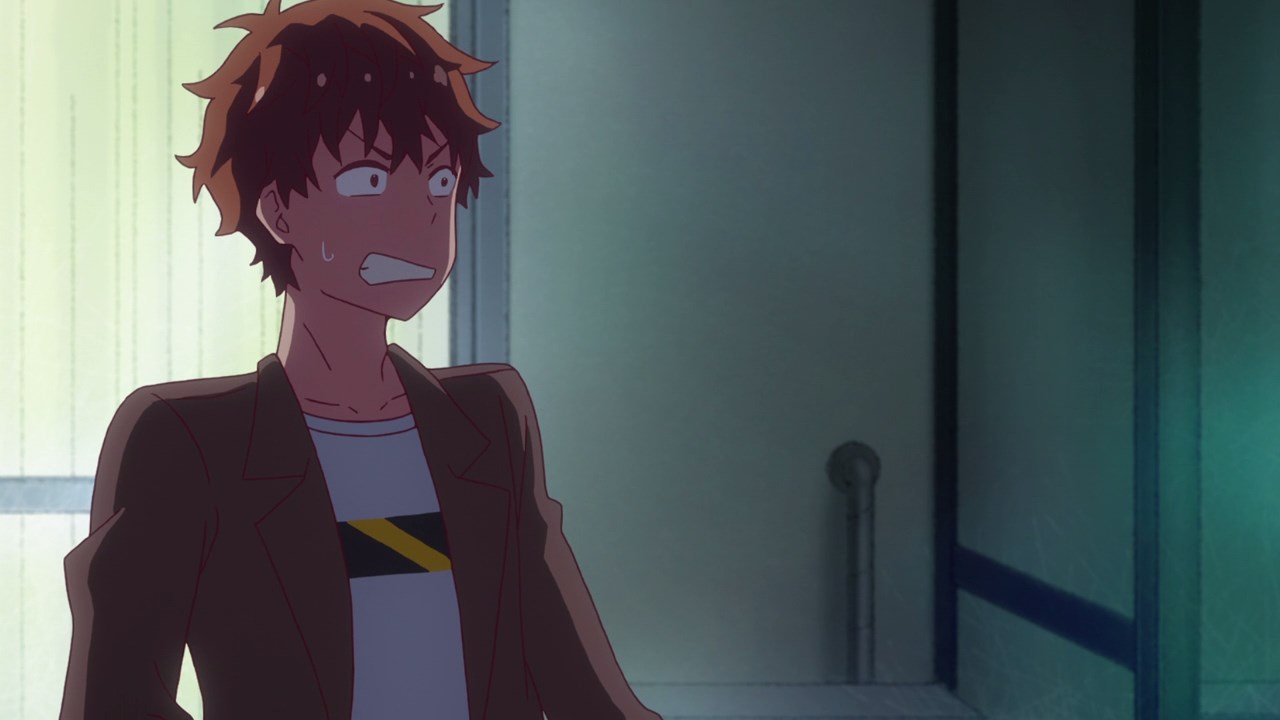 But anyways, it’s gonna be interesting on the next episode as Kazuya will date someone other than Chizuru or Ruka-chan.

Speaking of Ruka Sarashina, I bet that she’s gonna ruin his date with the rookie rental girlfriend. With that said, I’ll see ya next time!