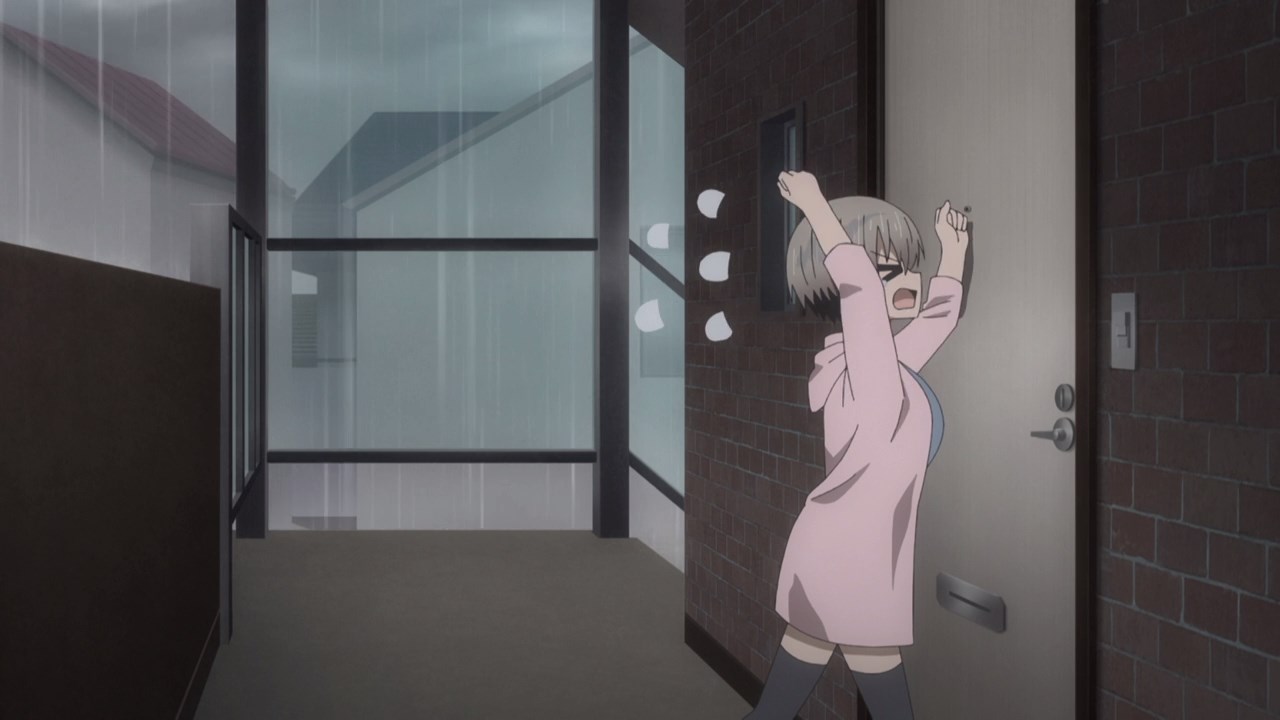 Alright everyone, take a guess on why Hana Uzaki is like that after the cliffhanger from the previous episode. Did Shinichi Sakurai decided to be cruel and not care about who made Uzaki-chan cry, or that she cried crocodile tears where Hana wanted Shinichi to help her summer homework?

Either way, that cliffhanger from the previous episode is thrown out altogether. Dammit, why does this anime have to play with my feelings!? 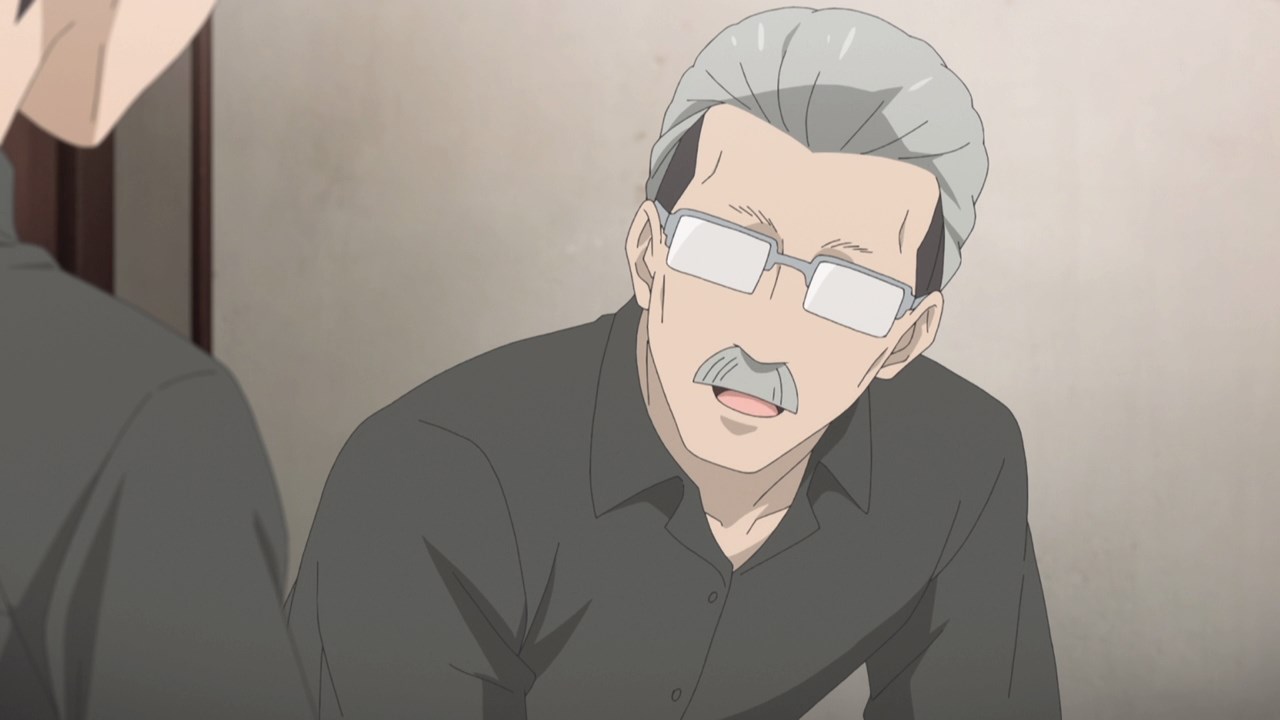 Anyways, here’s Akihiko Asai where he’s carrying heavy objects at the pantry. Um Asai-san, you should ask Sakurai for help since you’re an old man. 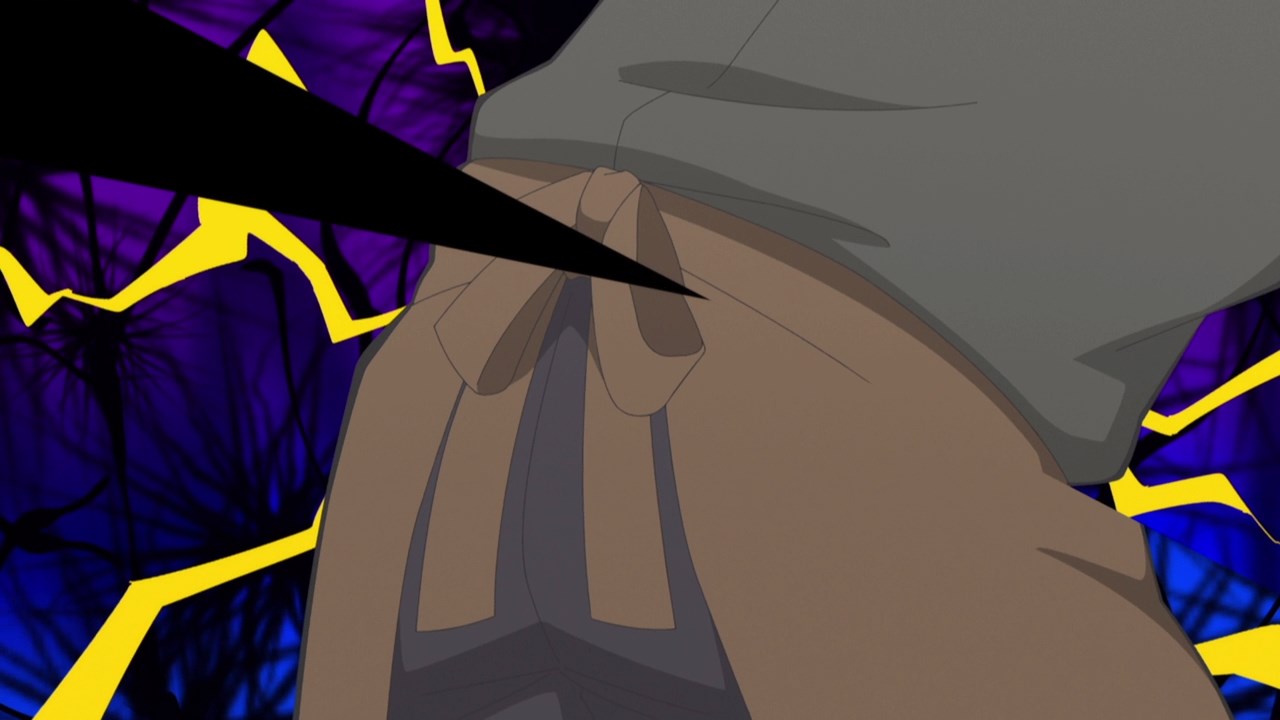 Unfortunately for Akihiko Asai, his back got broken that he’s been carried by Shinichi Sakurai to the hospital… 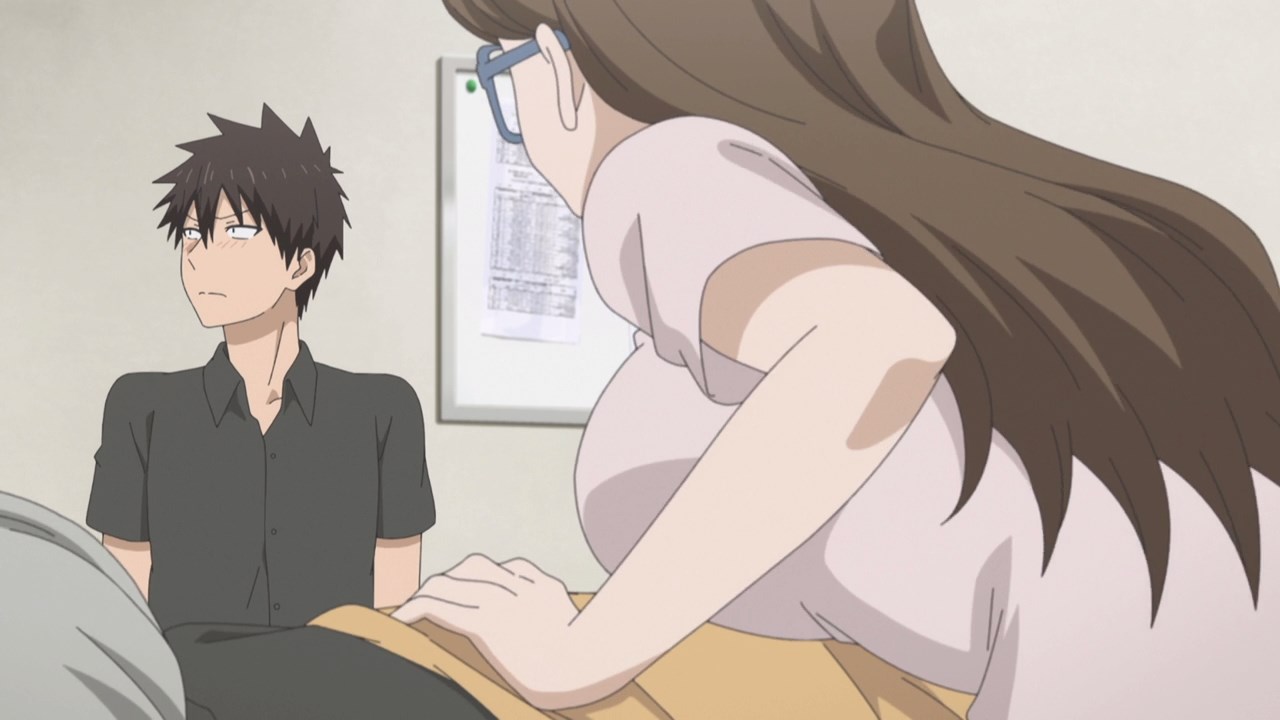 …where he’s being treated by a chiropractor. Man, I would say that this female chiropractor has SUGOI DEKAI melons! 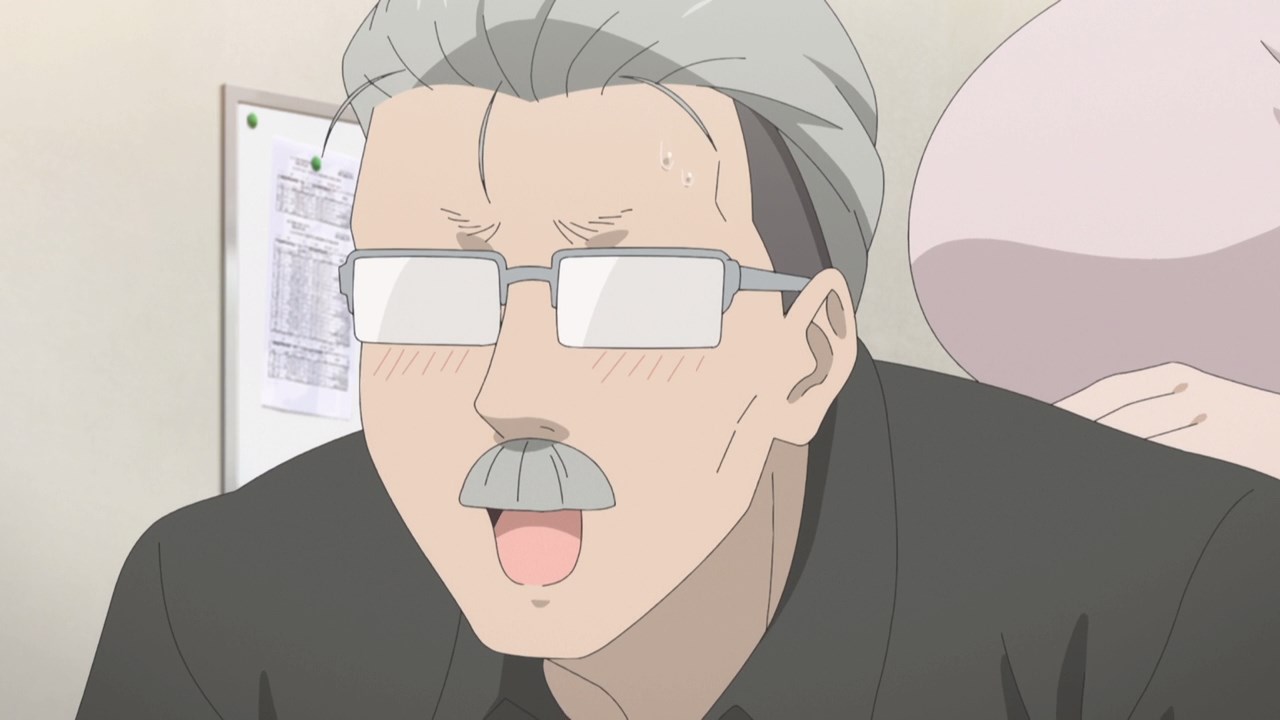 Oh, and Akihiko Asai is feeling it as her breasts is touching his back. Um, I hope he’s okay ’cause that’s gotta hurt. 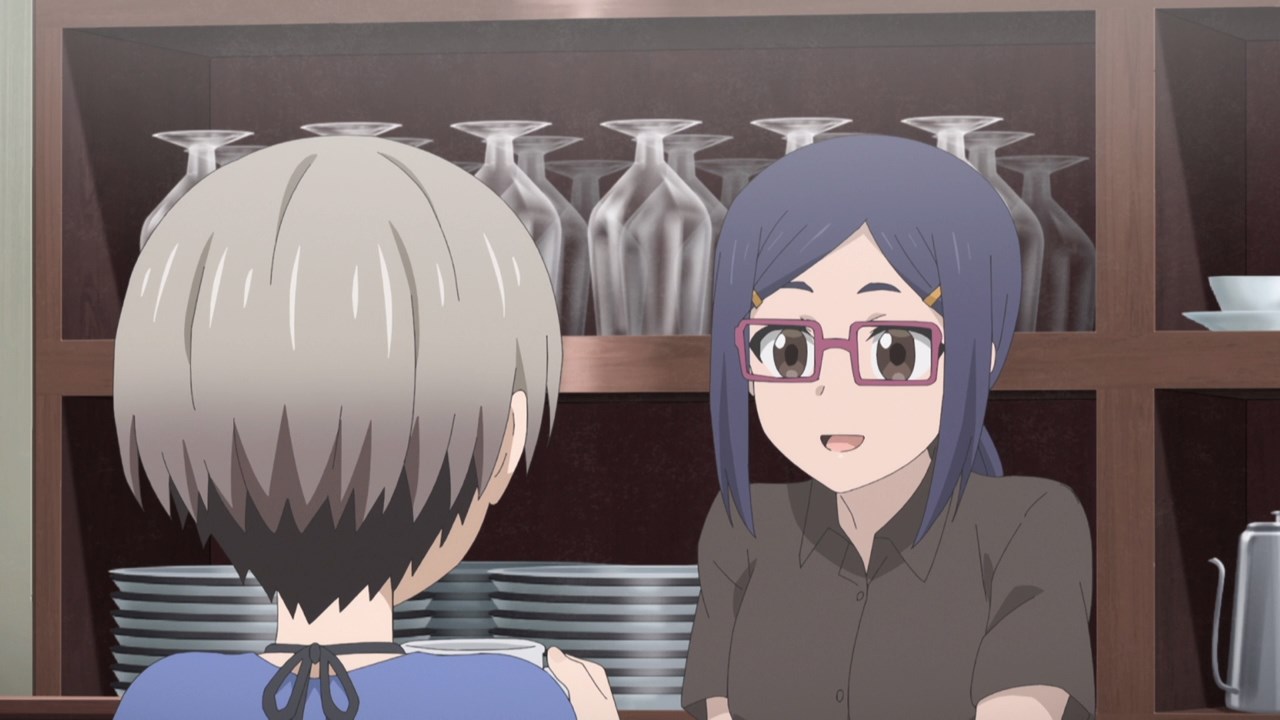 Anyways, Ami Asai asked Hana Uzaki on how did she met Shinichi Sakurai. According to Uzaki-chan, her meeting with Sakurai-sempai is a bit simple. 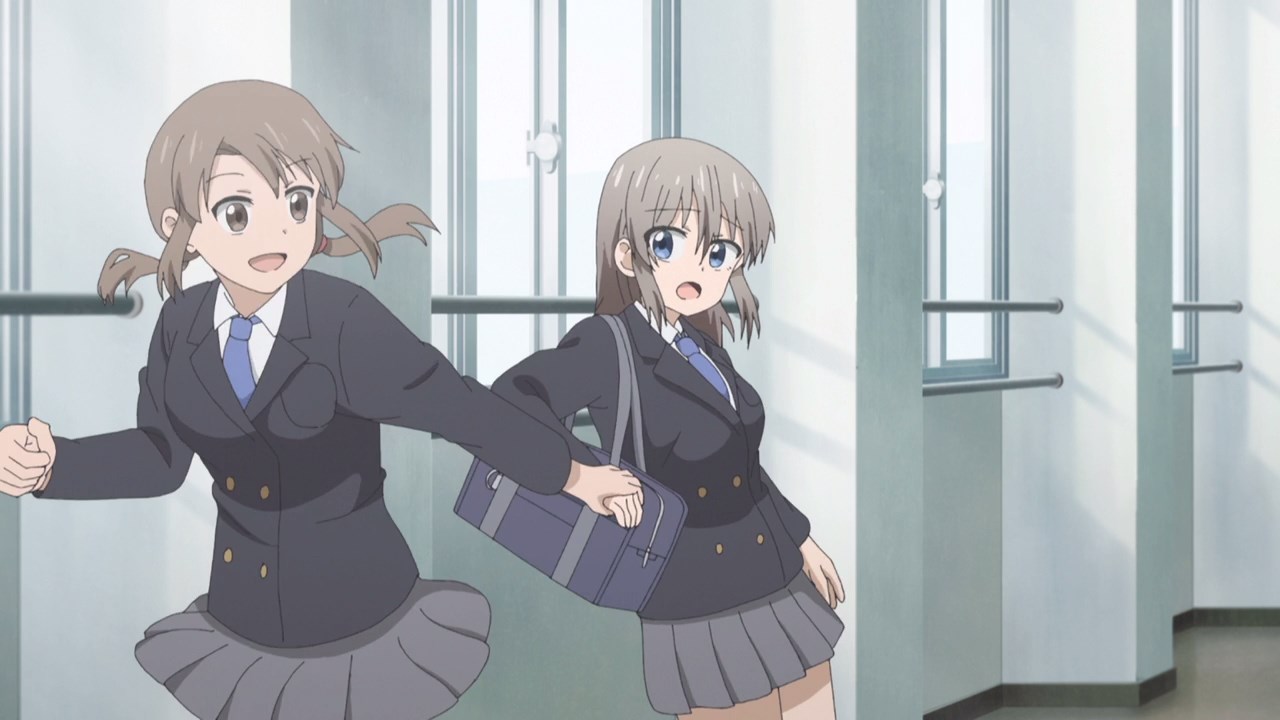 You see, she was dragged by her friend to join the swimming club as a manager. Of course, she didn’t want to in the first place, but her friend insisted because that club has sexy boys. 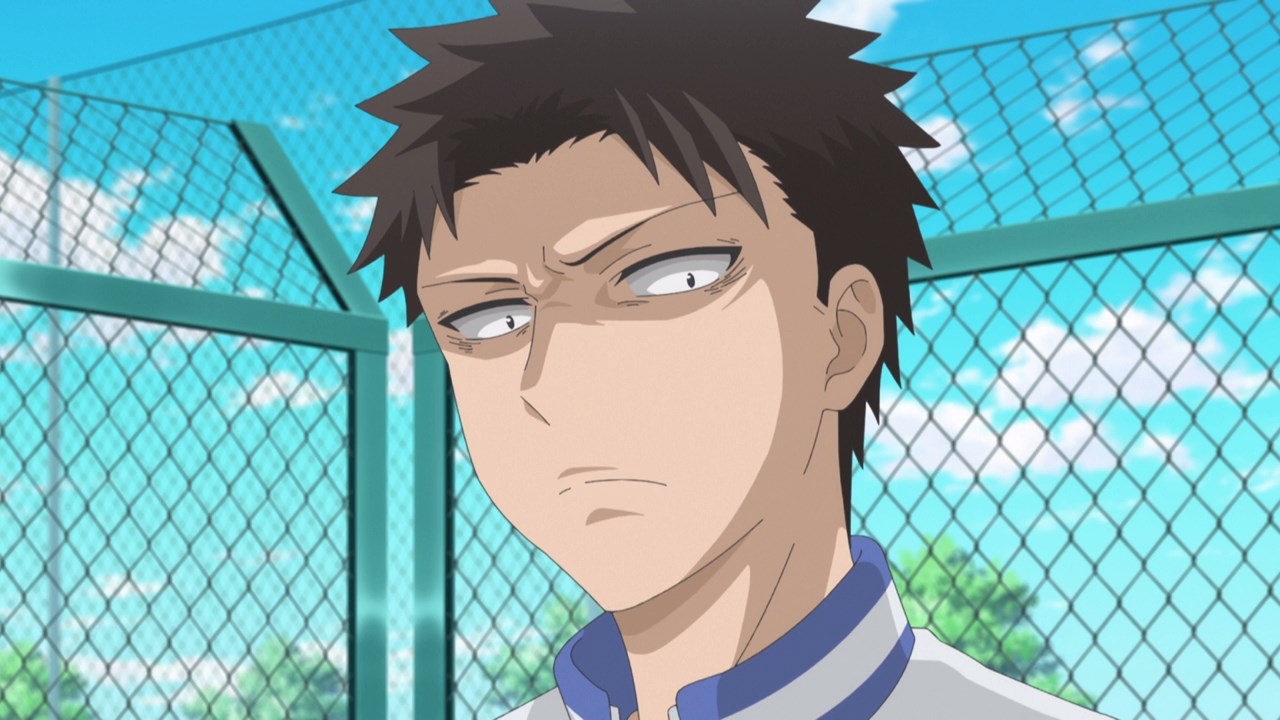 Well, except for this one as when Uzaki-chan met Sakurai-sempai, he looked scary with that nasty glare. 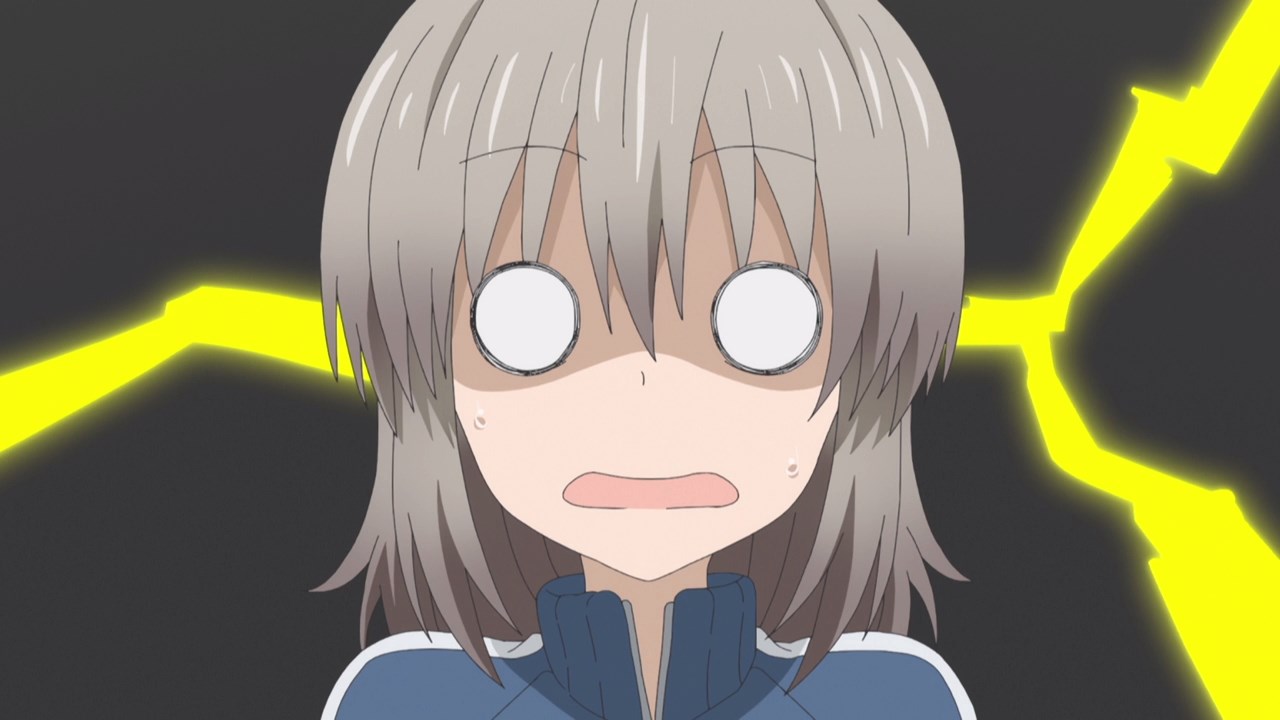 Heck, Hana is scared when approaching Shinichi because of his scary look. Of course, Sakurai-sempai is not some bad person as he’s diligent and quite a well-mannered person.

And that concludes her backstory on how she met Sakurai. But you know what, I wonder what her life would be had Hana Uzaki didn’t join the swimming club and met Shinichi Sakurai? Still, I’m glad that she met Sakurai-sempai ’cause she’s starting to have feelings for him, especially when she emulate his “-ssu” tic. 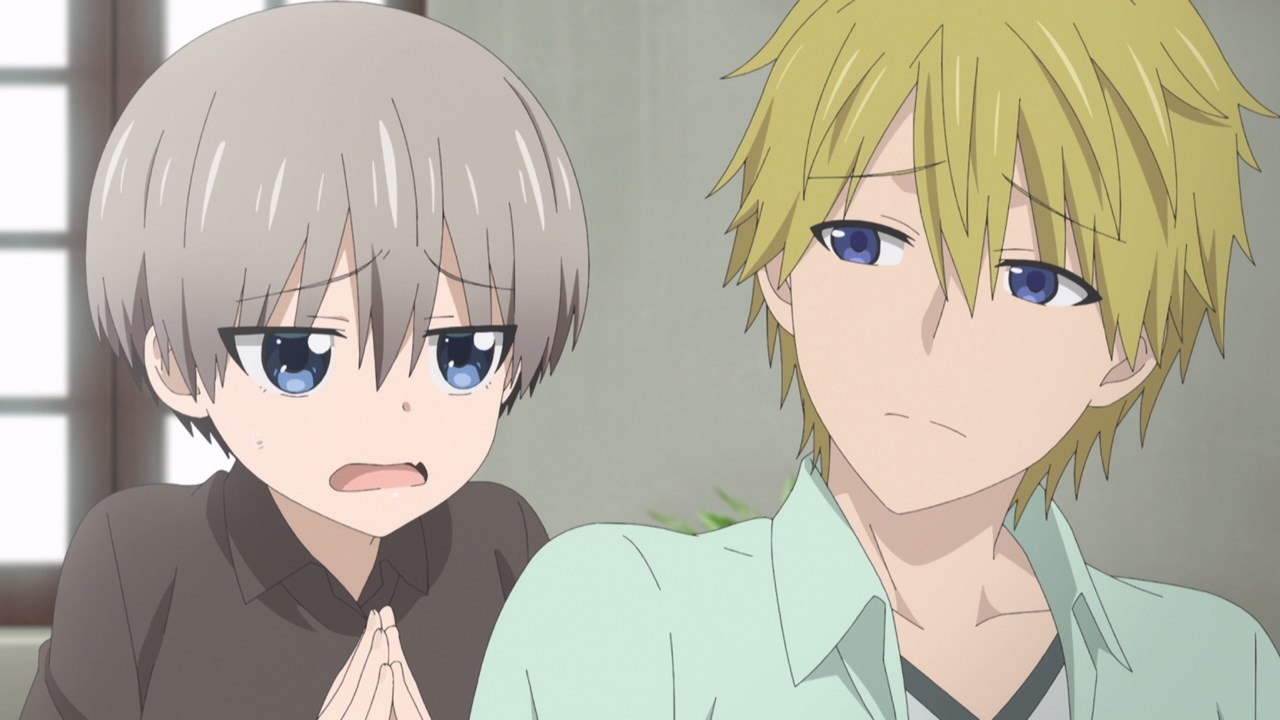 Now let’s move onto the present where Hana Uzaki nagged Itsuhito Sakaki if Shinichi Sakurai got wasted after drinking lots of alcohol.

Um, I don’t think it’s a good idea to ask Sakaki if Sakurai got drunk even though he can last longer. 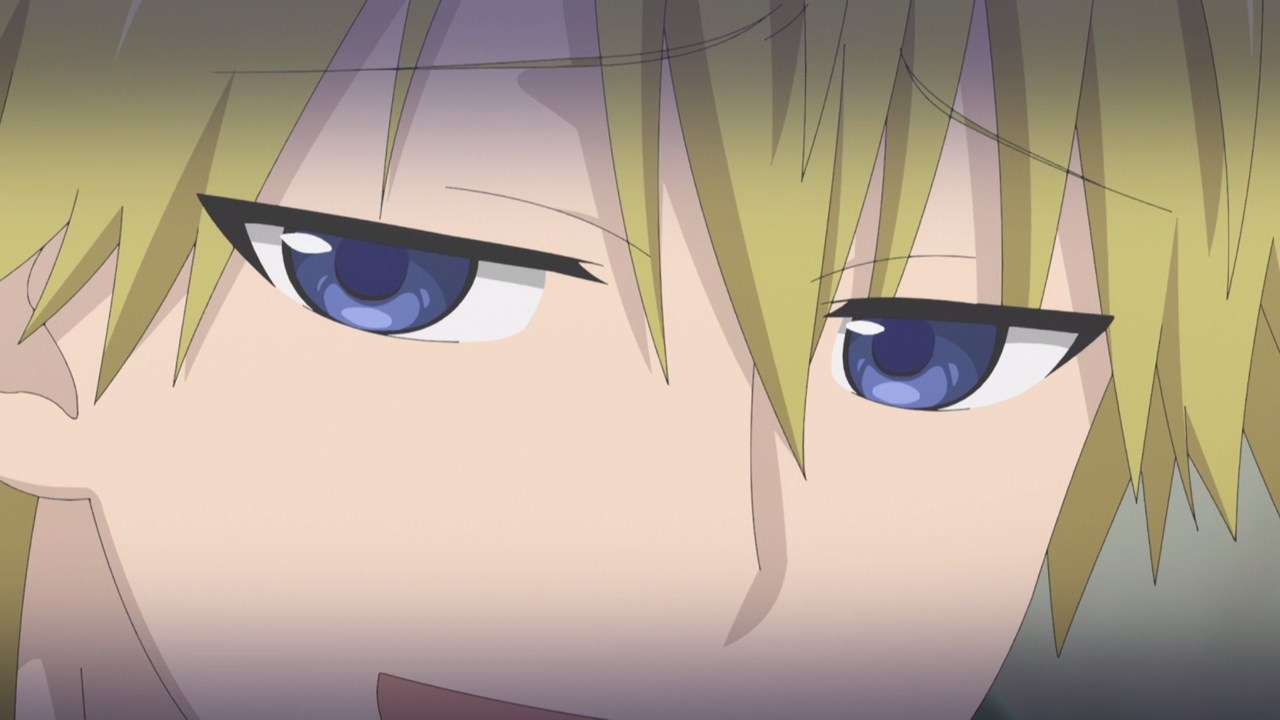 Seriously, this guy is planning something bad to Shinichi in order to make him close to Hana. Geez, I’m scared of this! 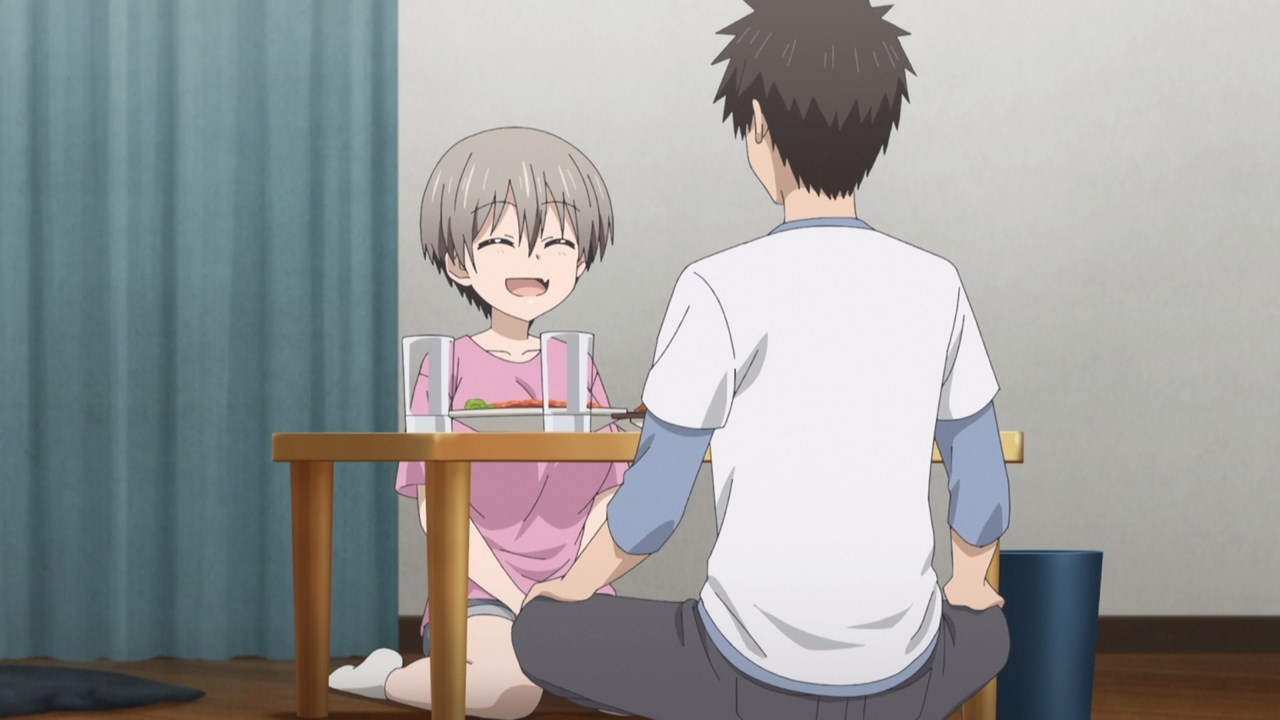 Anyways, Uzaki-chan went to Sakurai’s apartment where she cook dinner for him. Yeah, pretty normal stuff coming from her. 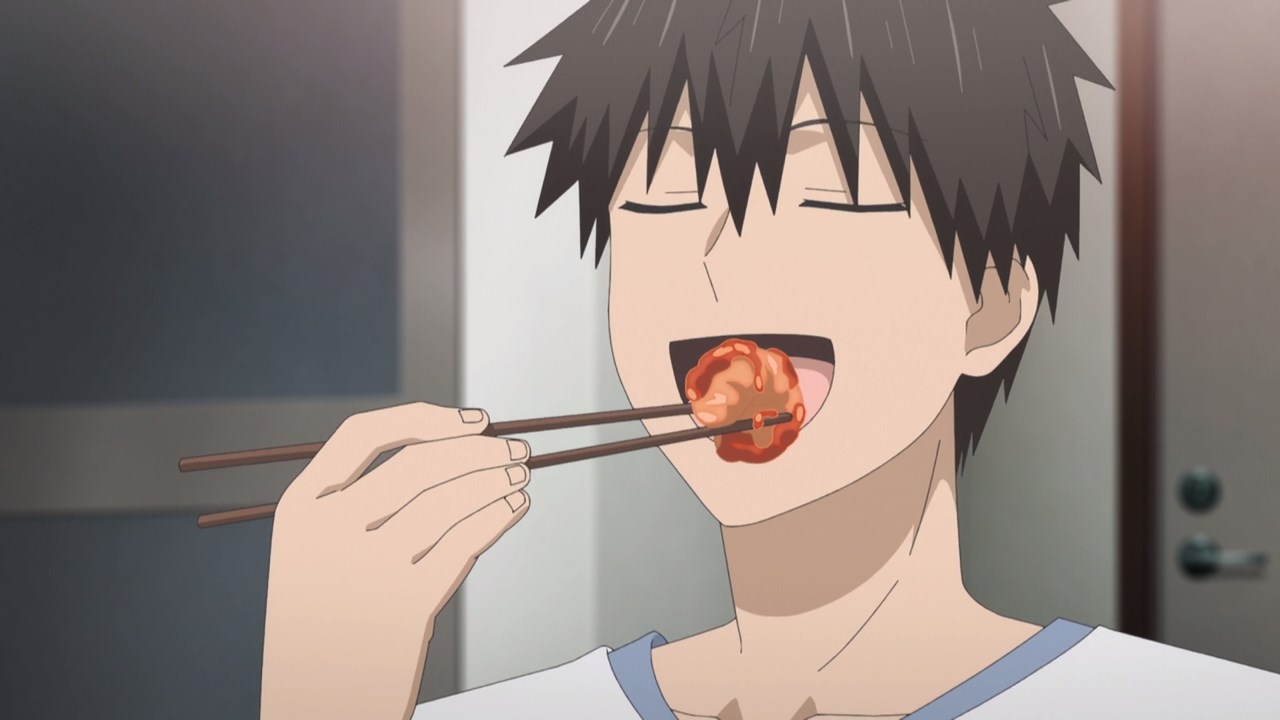 Except that Hana is plotting to make her senior tipsy by cooking spicy food. Of course, that was the first step. 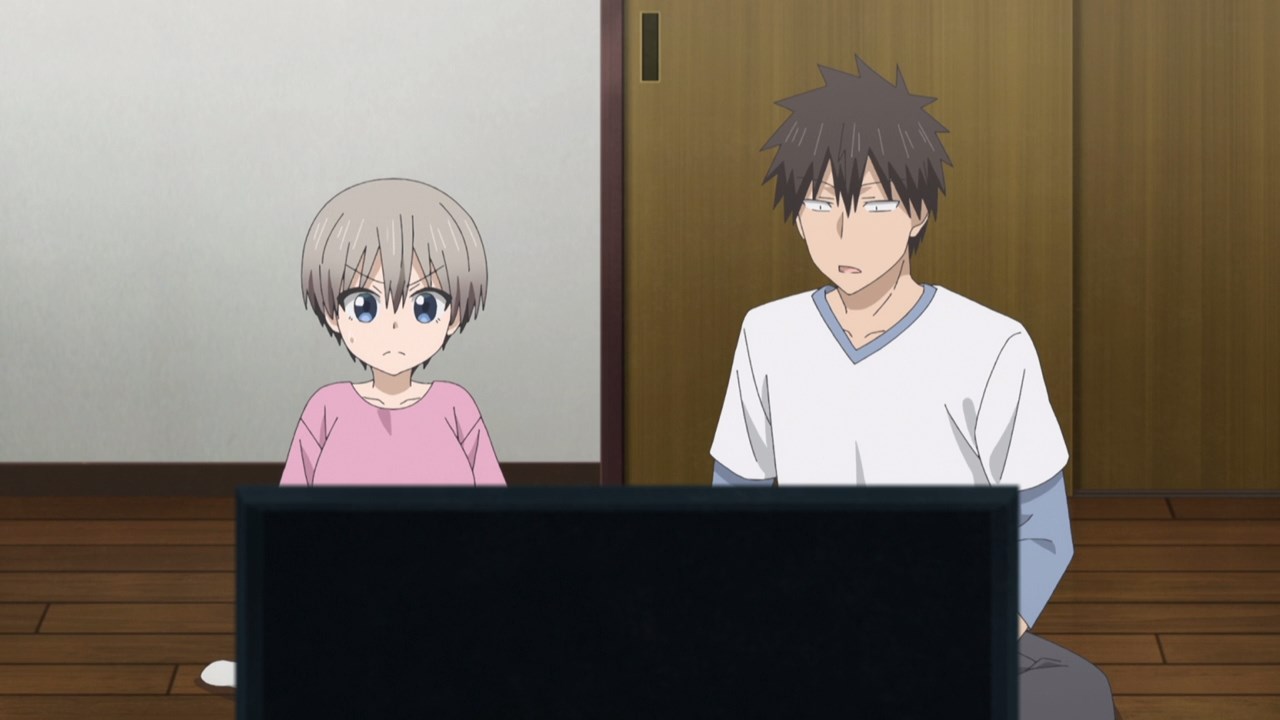 The second step is to make him drink lots of booze while watching movies. I mean, Sakurai needs to cool down after eating spicy shrimp. 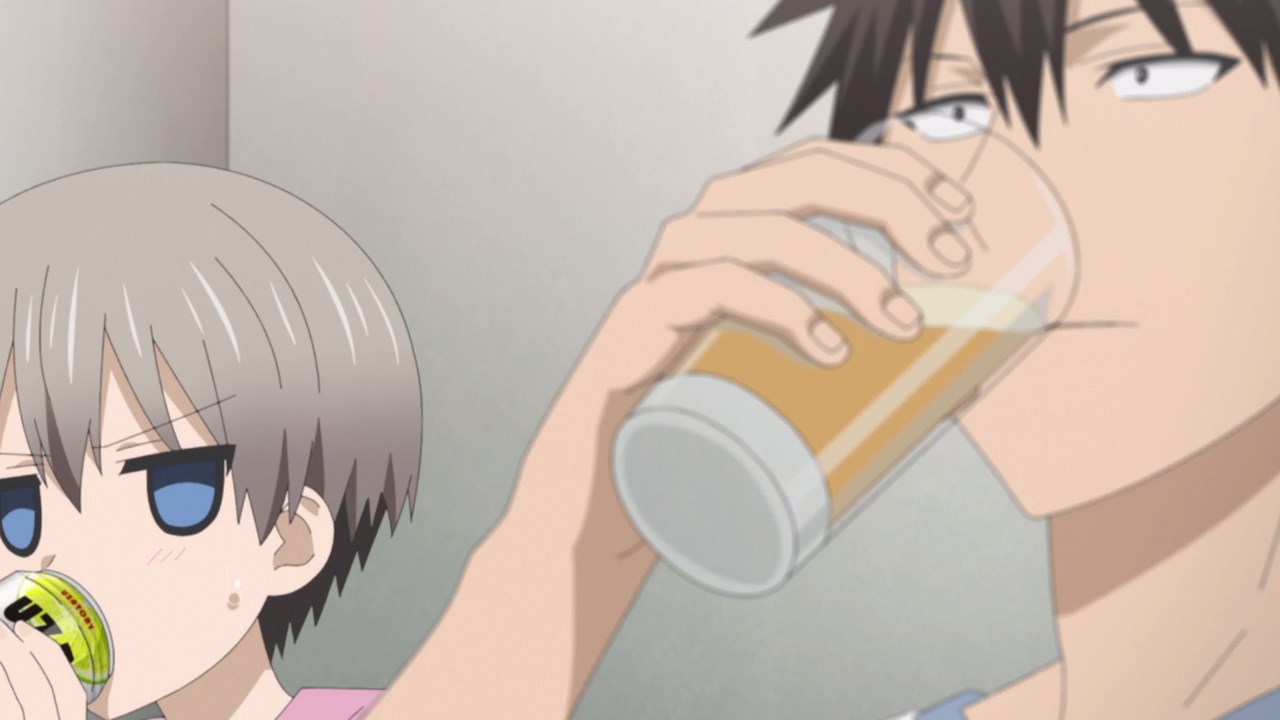 But anyways, here’s Hana pretending to drink her can of beer as she watch her sempai chug lots of alcohol. Let’s hope that her plan worked. 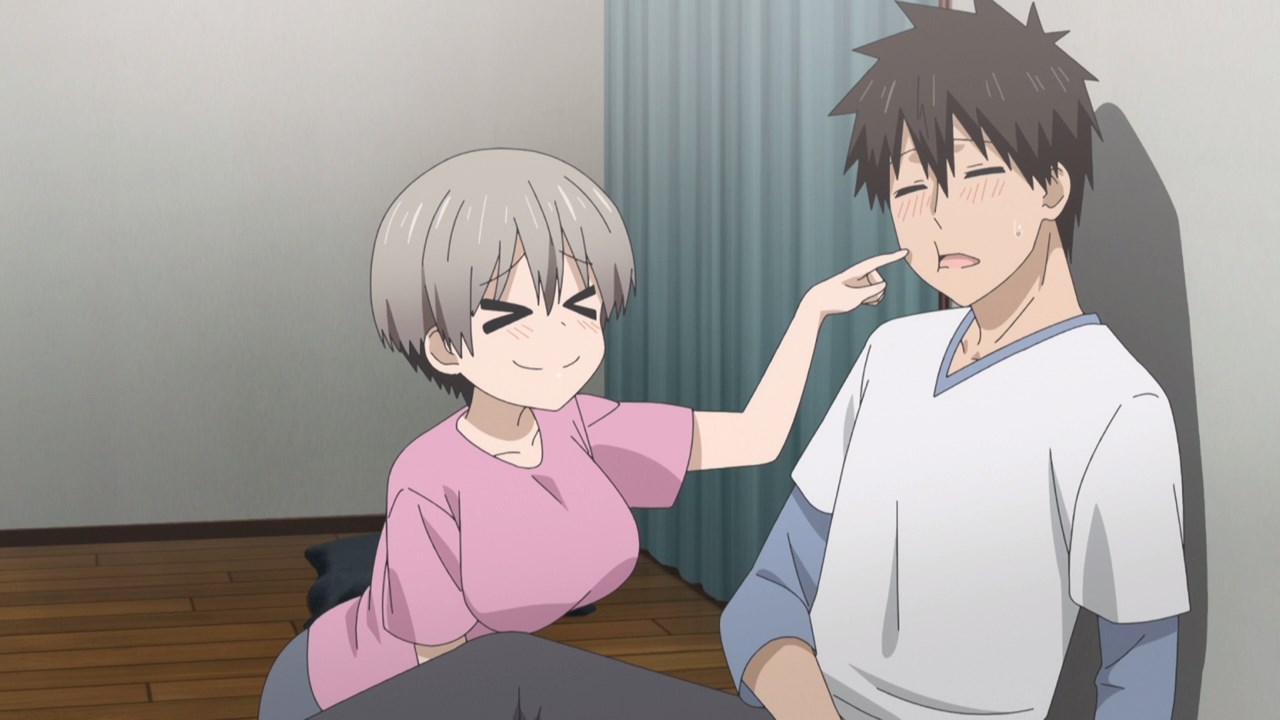 Well, she managed to make Sakurai-sempai drunk and man, he’s very vulnerable when Uzaki-chan is gonna hear some embarrassing stories and ramblings from him. Man, this is blackmail right here! 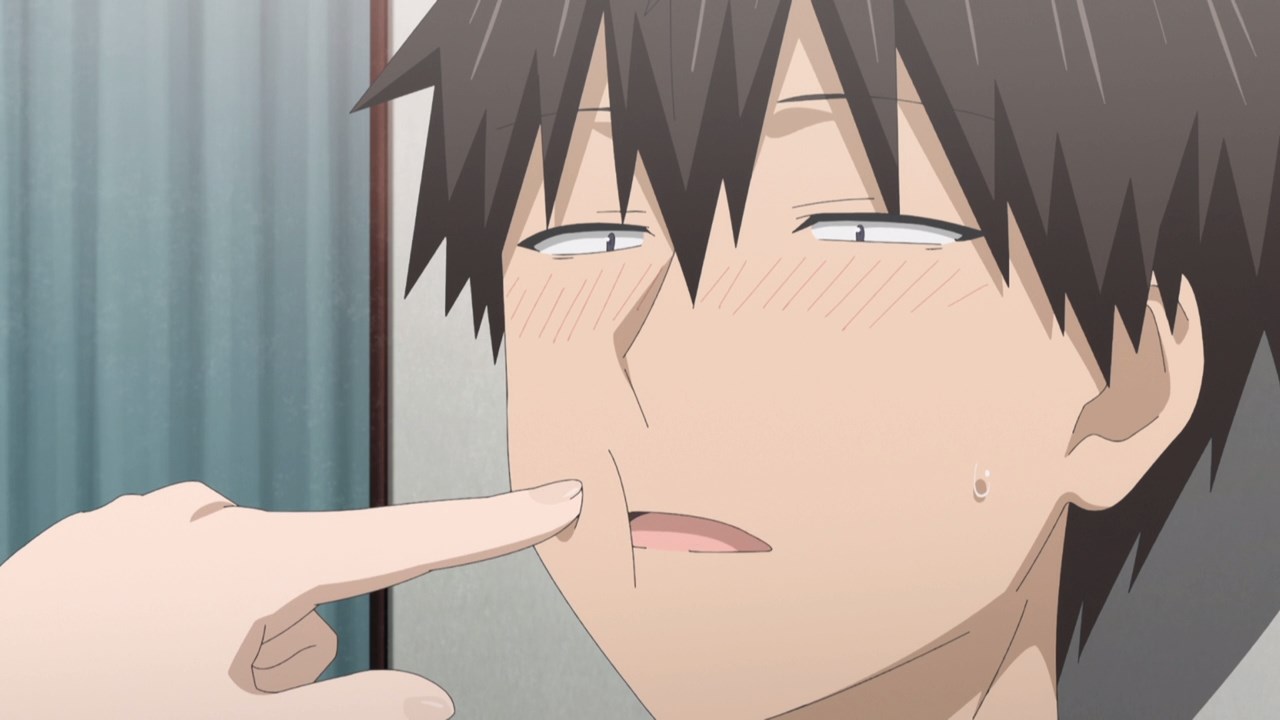 Anyways, Sakurai blurted out on how much he loves Uzaki-chan’s… cooking. Sorry, you expect the girl with big tits, but Shinichi actually mentioned her exceptional cooking. 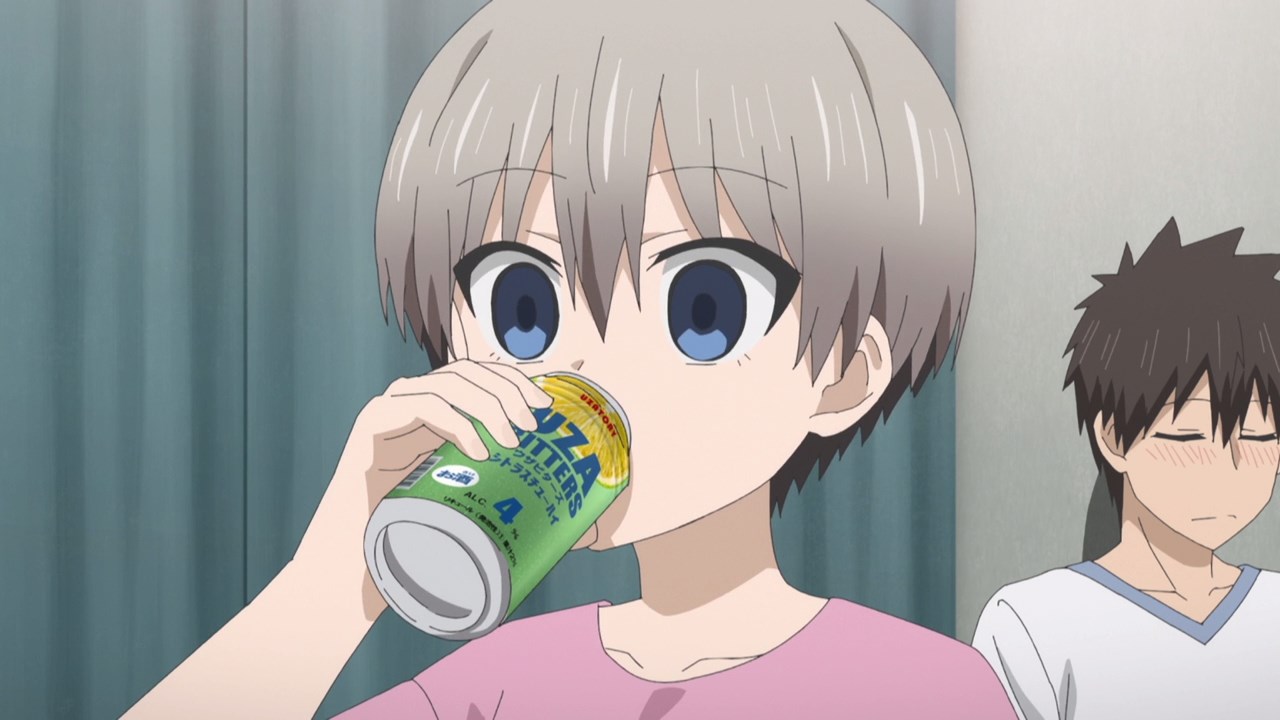 Speaking of Hana Uzaki, it appears that she got flustered on what he said and drink lots of booze to calm herself down. Um Uzaki-chan, you’re gonna get drunk soon enough! 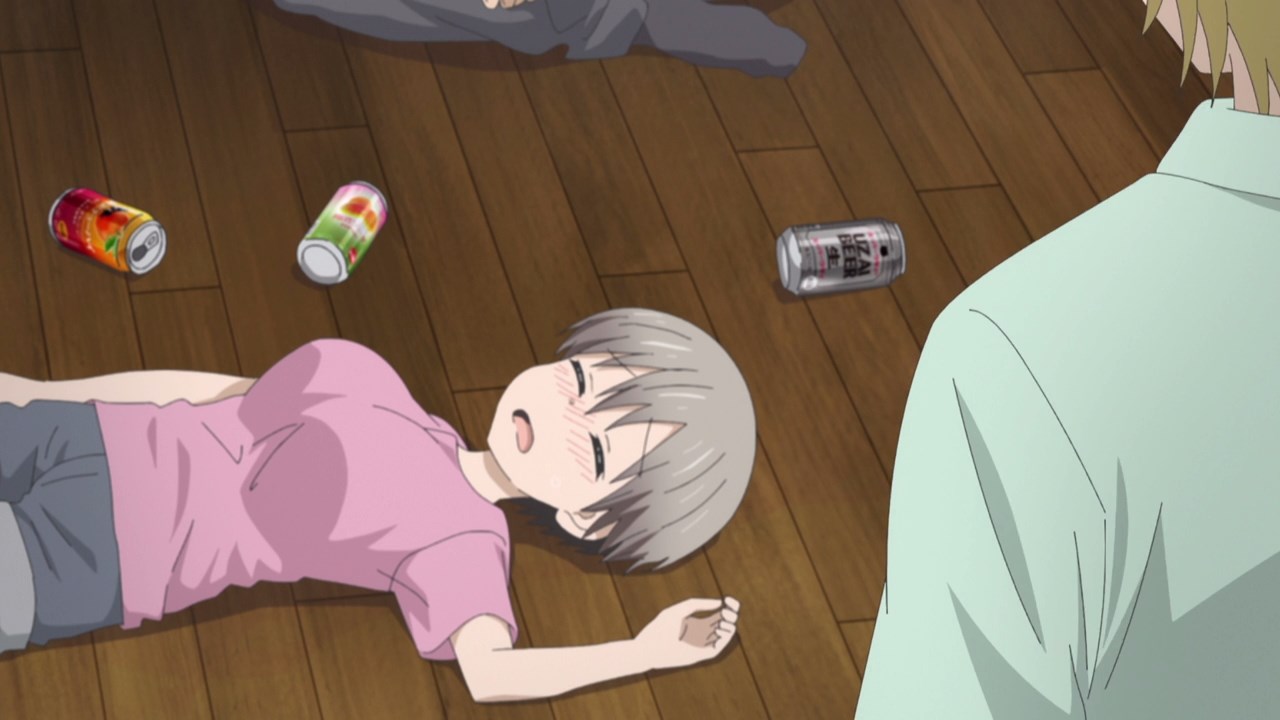 With that said, looks like Hana Uzaki is down but wait a minute, someone entered Shinichi Sakurai’s apartment? It’s either he forgot to lock it up or someone has a spare key.

More importantly, I’m scared that this person will do something bad to both Sakurai and Uzaki-chan! 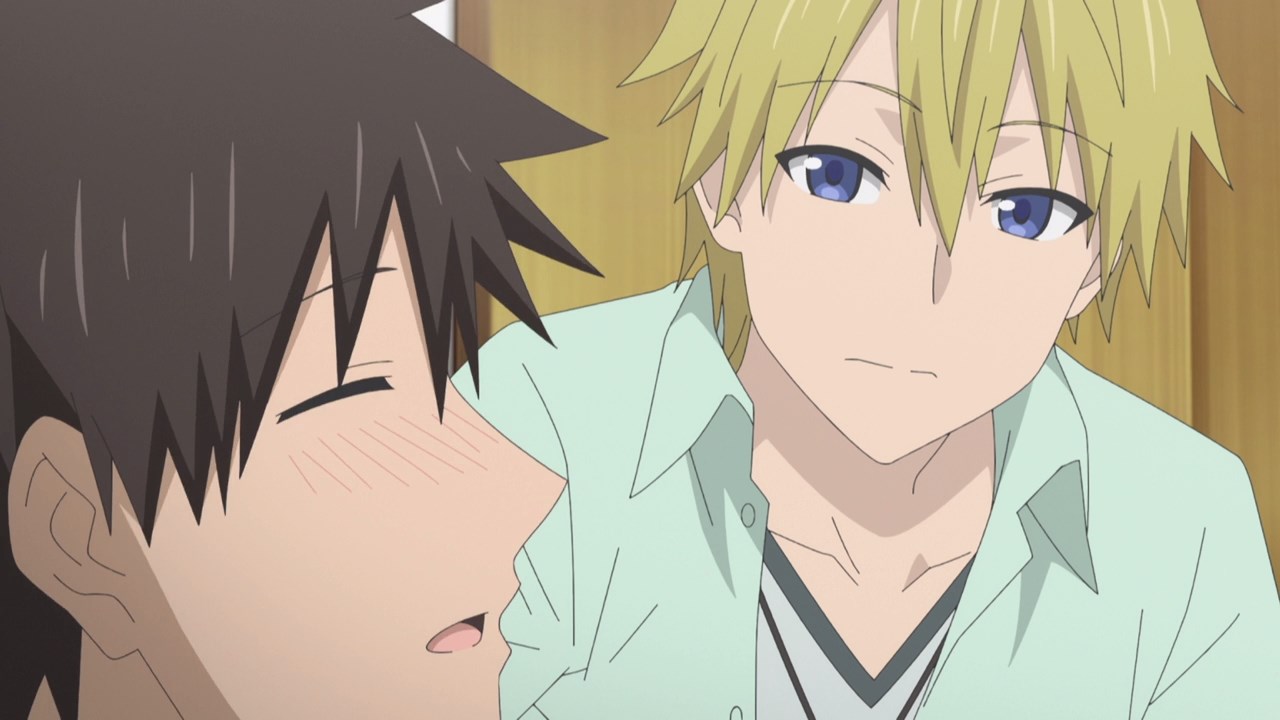 Oh, it’s just Itsuhito Sakaki where he found two drunk college students. Of course, he can’t just leave them in the cold however. 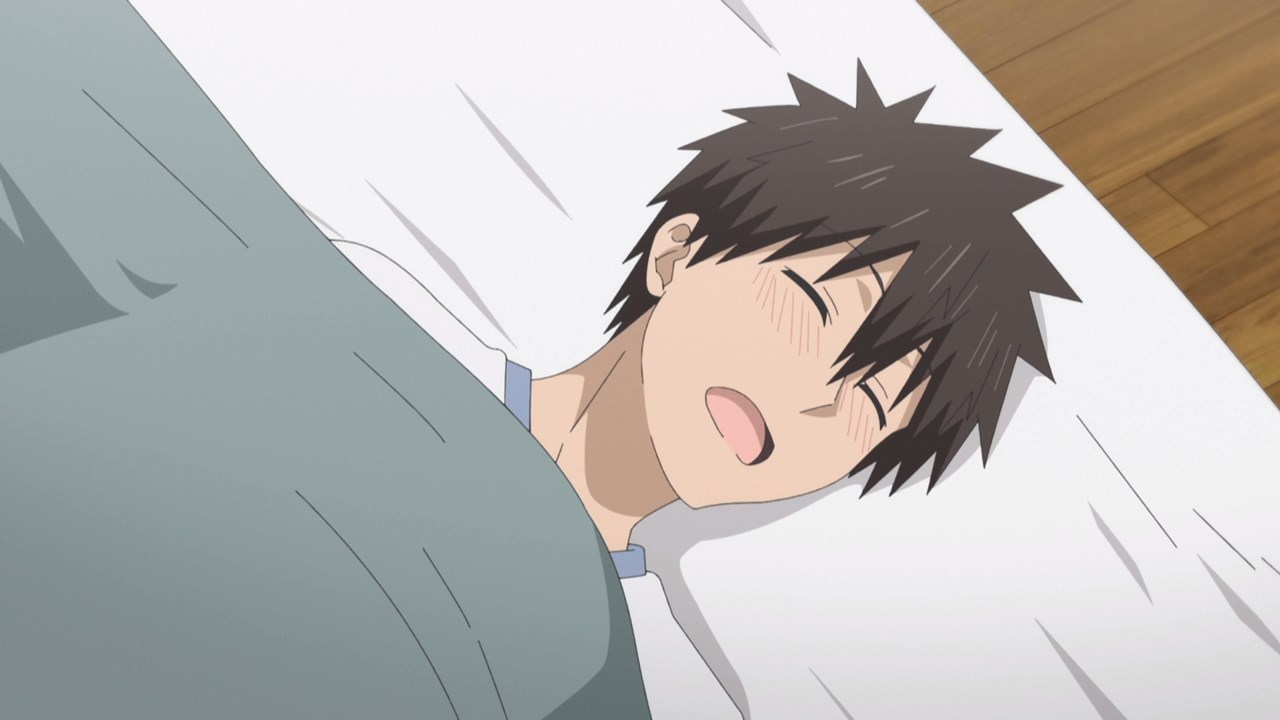 So, Sakaki put Sakurai to his futon and let him sleep. Oh, and he left the apartment afterwards as Itsuhito doesn’t want to cause more trouble.

Still, I’m hoping that they won’t get a nasty hangover since they drink too much booze last night. 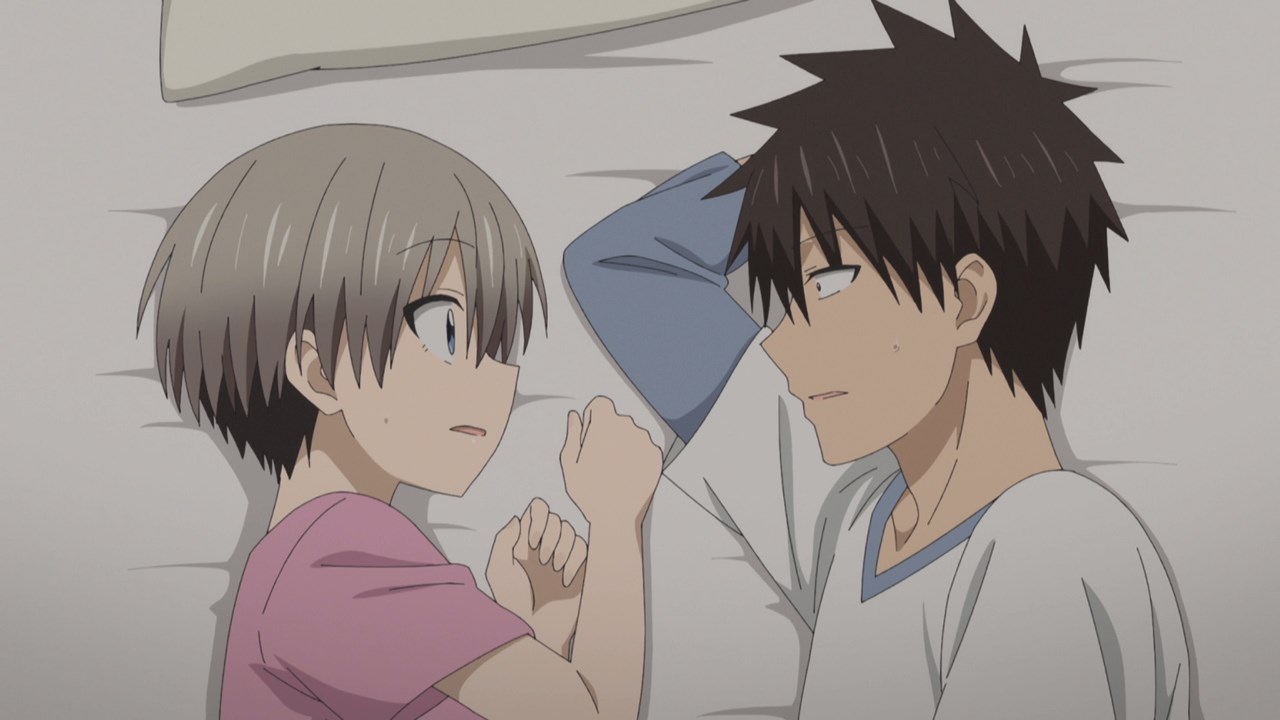 On second thought, it appears that both Uzaki-chan and Sakurai are surprised that they’re sleeping under the same futon.

Oh, and they have some hazy memory too which is why they should drink moderately or something bad will happen to them once morning comes around. 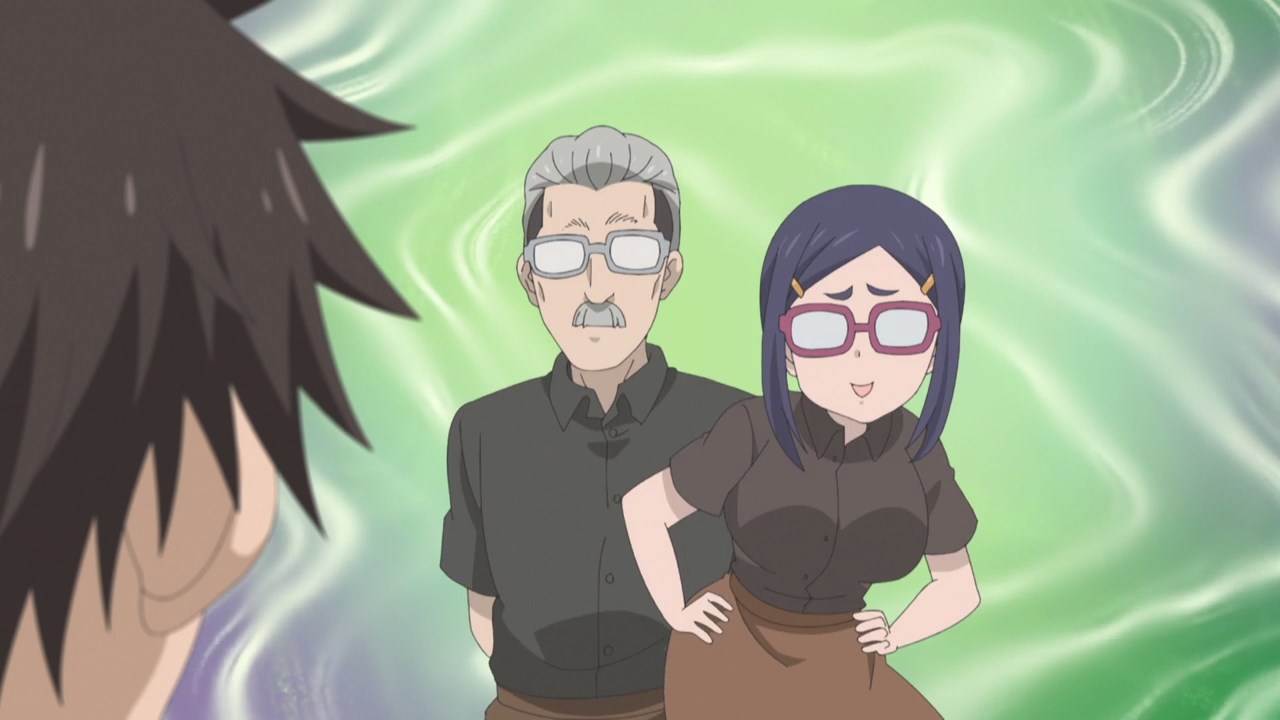 On the other hand, looks like Akihiko and Ami Asai are really curious if they finally tie the knot in bed while being tipsy. Um you two, they didn’t do it because Uzaki-chan and Sakurai are two tired and sleepy.

Well, that’s the end of this series but wait, has Hana Uzaki finally finish her summer homework? Nah, I don’t think that’s brought up again. 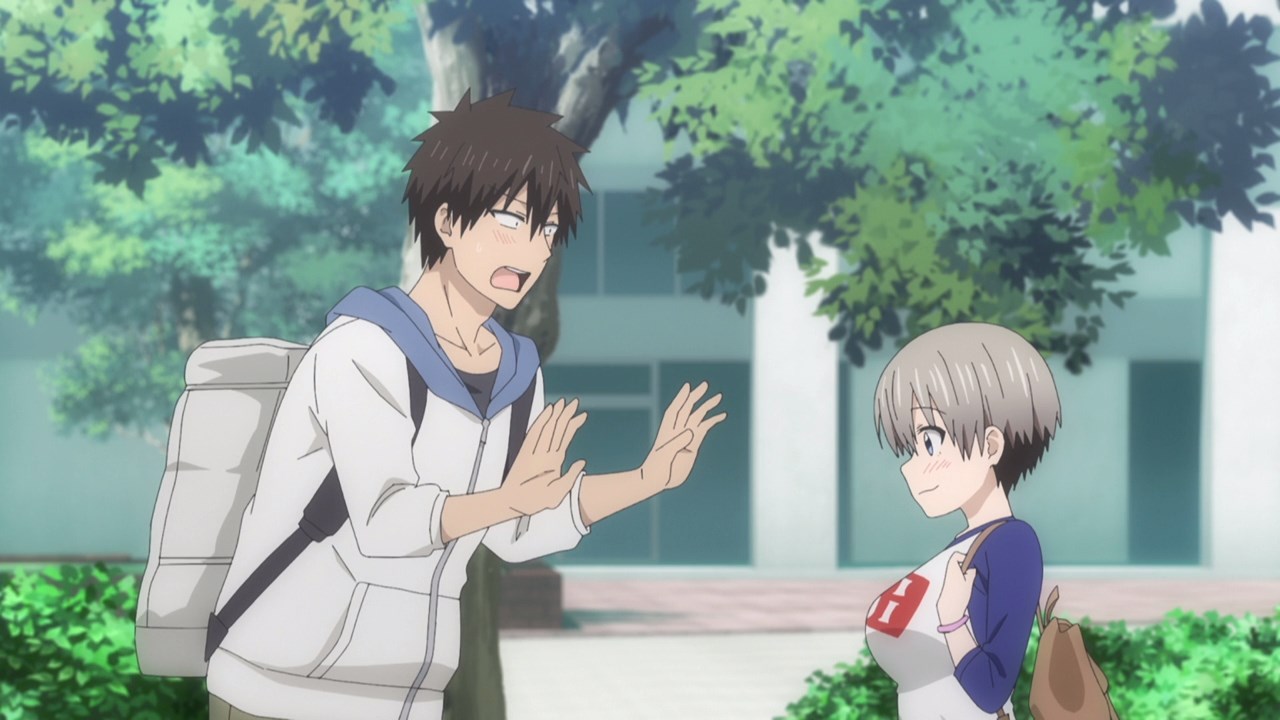 Anyways, Uzaki-chan wa Asobitai! was a blast to watch and while people are still complaining about Hana Uzaki, especially her large breasts, the show itself is okay. Then again, it would be better if their relationship between Hana Uzaki and Shinichi Sakurai went to another level rather than being the boke and tsukkomi duo.

With that said, it was a decent show but I really wish that in the next season, I’m hoping that there’s some development between them. Oh, and stop with the dramatic cliffhanger ’cause I don’t wanna be fooled if a character has a problem or it’s just a joke.