Legend of the Galactic Heroes: Die Neue These Episode #22

Posted on October 4, 2020 by benigmatica 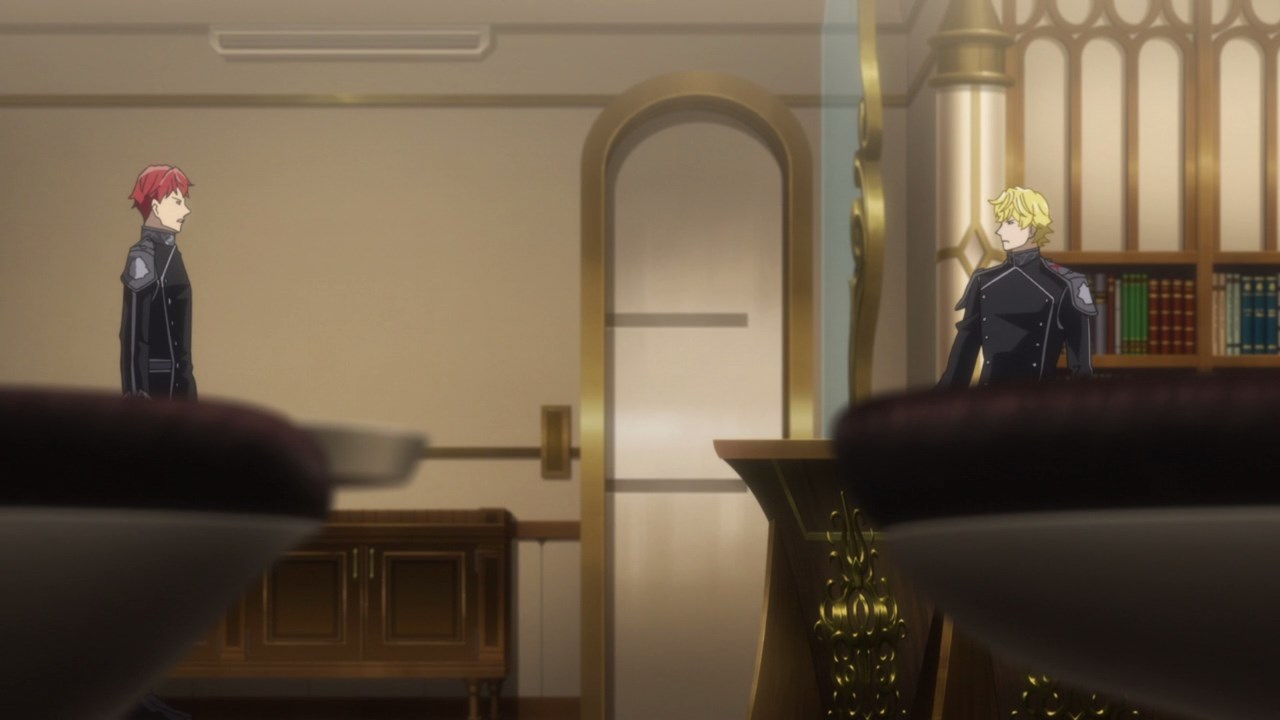 We’re getting closer to the climax of the Lippstadt War as the Lohengramm-Lichtenlade Axis is pushing the Lippstadt Nobles Coalition into a corner.

But before they crush the treacherous nobles under Duke Otho von Braunschweig, High Admiral Siegfried Kircheis wants to have an important discussion with Commander-in-Chief Reinhard von Lohengramm in regards to that nuclear strike that turned Westerland into a wasteland. 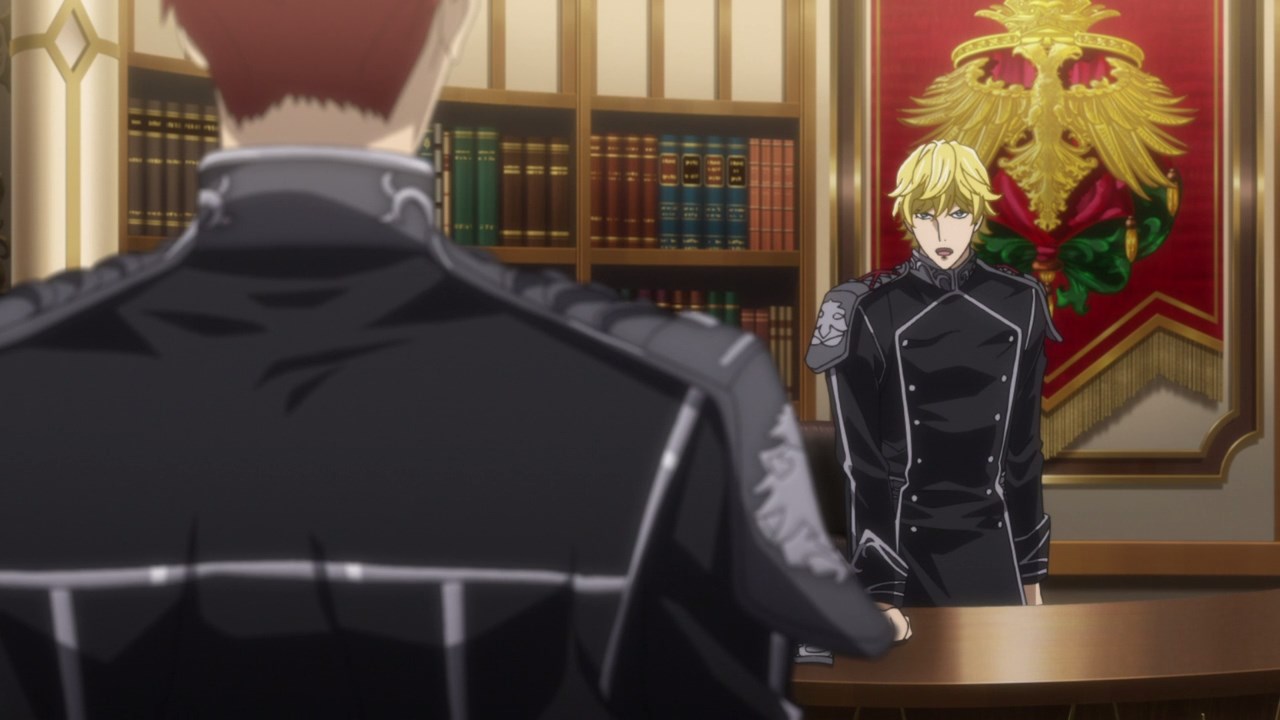 Unfortunately for Reinhard von Lohengramm, while he’s aware that millions of lives were lost in Westerland, the commander-in-chief can’t tell the whole truth to Siegfried Kircheis. It would be better for the high admiral talk to Vice-Admiral Paul von Oberstein regarding Westerland.

Also, it would be better if they have a man-to-man talk ’cause they might not have another chance once they defeated Duke Braunschweig and his supporters. 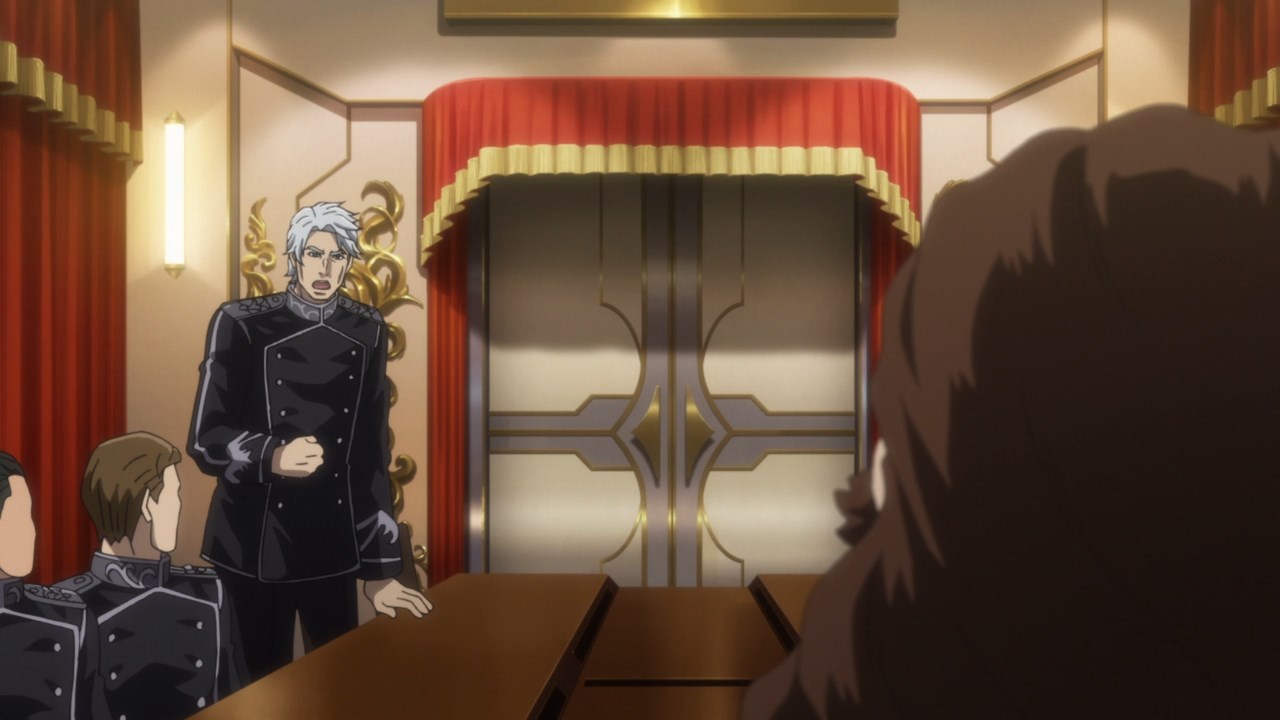 Meanwhile at the Geiersburg Fortress, Vice-Admiral Adalbert von Fahrenheit told the duke to focus its remaining forces to defend the fortress and prolong the battle until the enemy’s supplies are run out.

It’s a viable strategy from the vice-admiral since the coalition can stage a comeback once Marquis Lohengramm and his fleet are running out of energy and munitions. 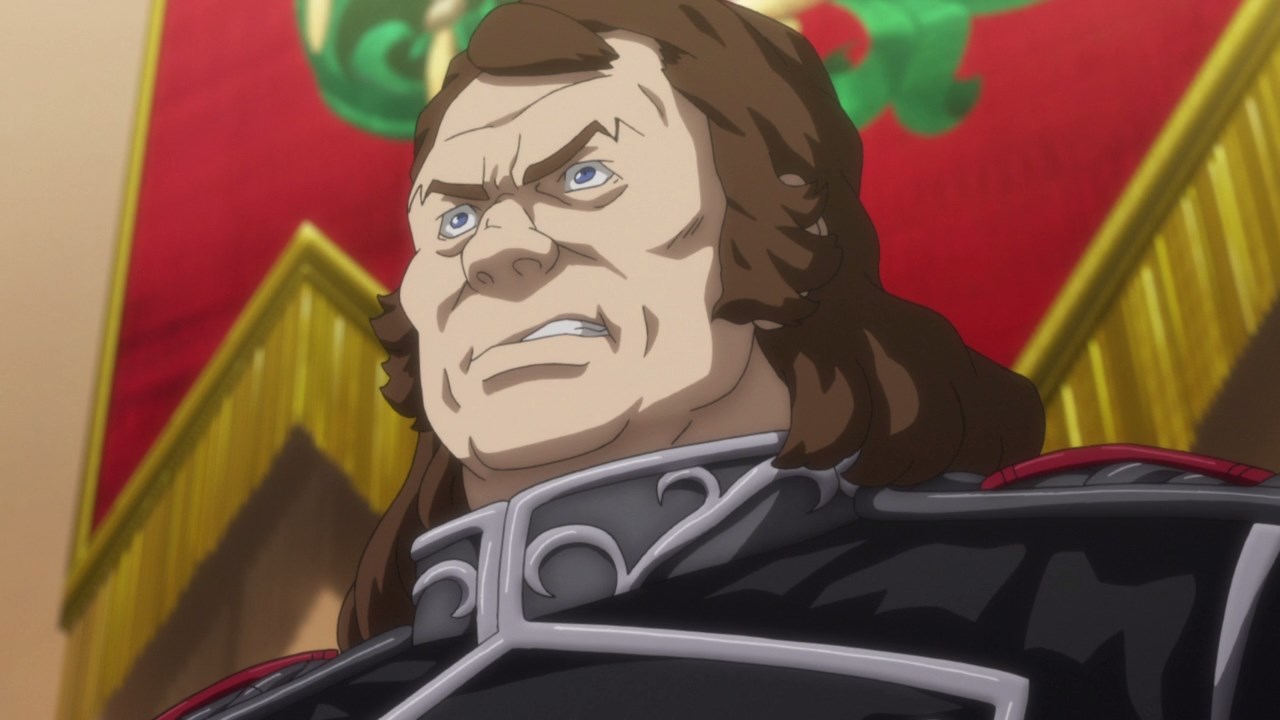 But, Duke Otho von Braunschweig don’t agree to his plans as he ordered everyone to deploy in hopes of turning things around. I’m not surprised that Duke Braunschweig would reject Vice-Admiral Fahrenheit’s strategy as he deemed it cowardly.

However, the irony of Duke Otho von Braunschweig that despite ordering his troops to fight bravely till death, he’s a coward who’s scared of being killed. 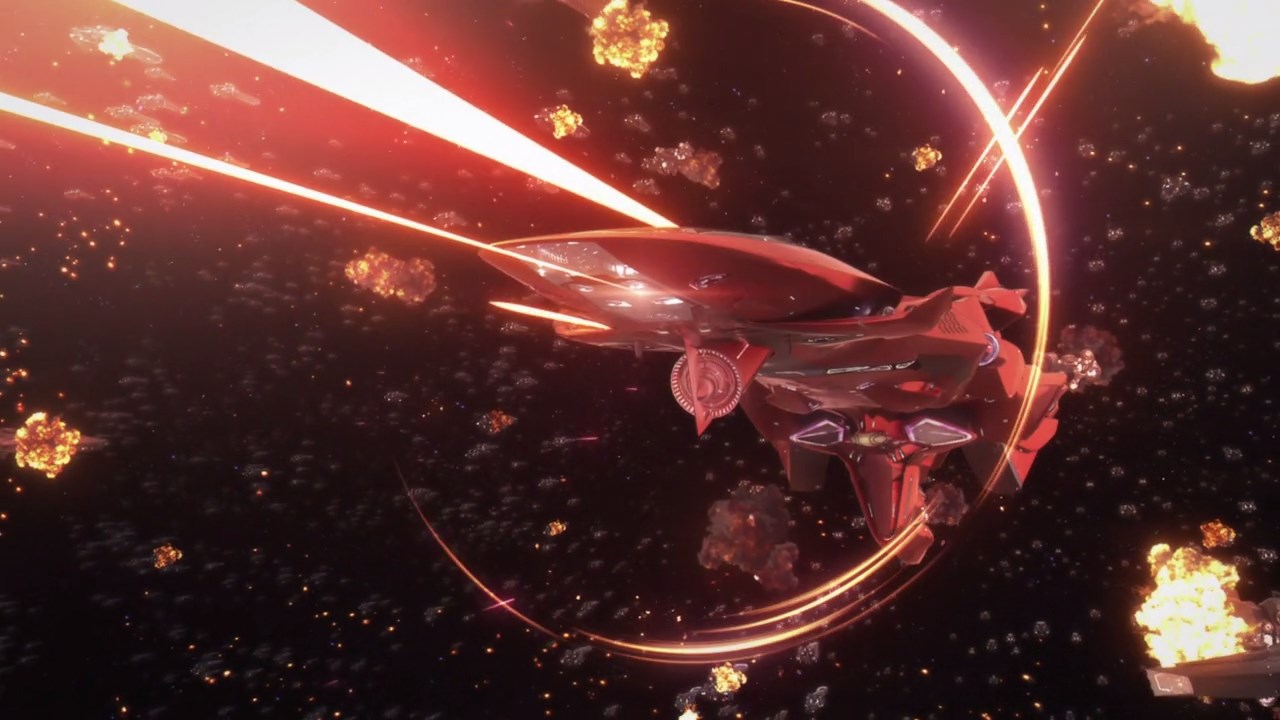 Anyways, the Imperial Fleet have arrived to destroy the remaining coalition forces at Geiersburg.

And seriously, High Admiral Siegfried Kircheis and his fellow commanding officers won’t waste no time on destroying every single ship who would foolishly stage a comeback. 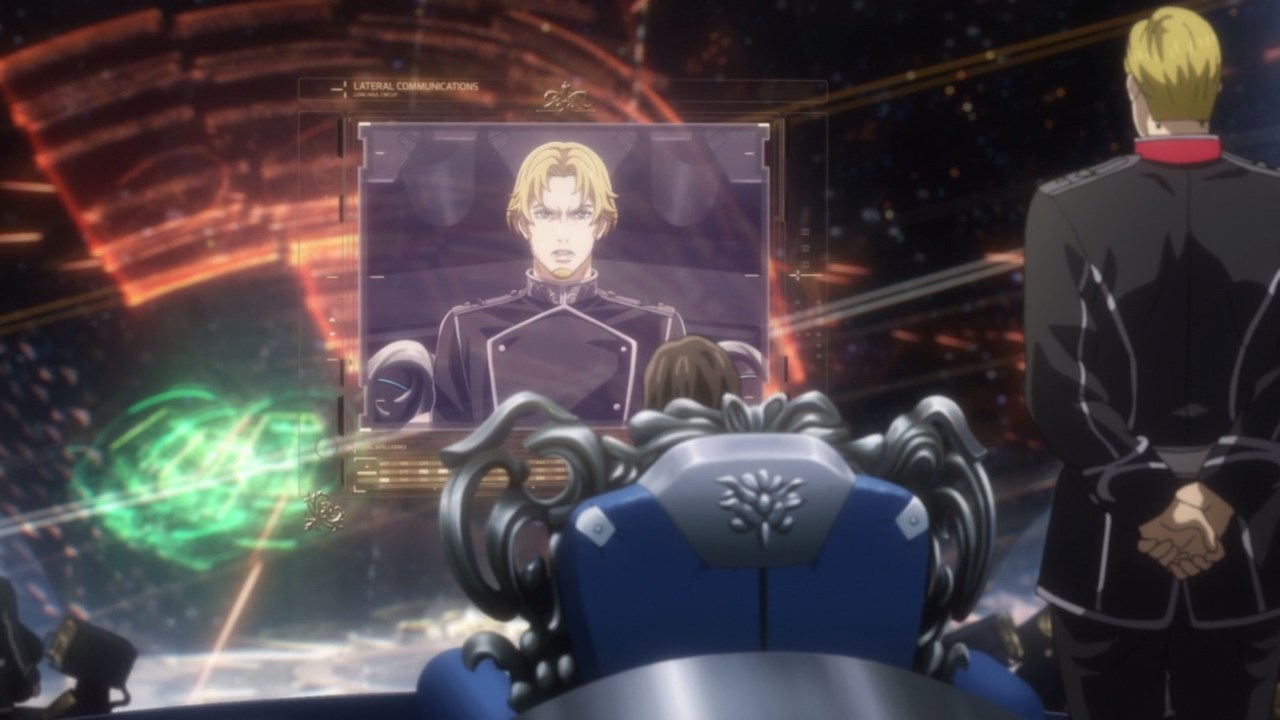 Oh, and some of them like Baron Flegel challenged Admiral Oskar von Reuenthal to a one-on-one ship duel. Man, are they still trying to uphold some chivalry despite the fact that honor doesn’t apply in warfare? 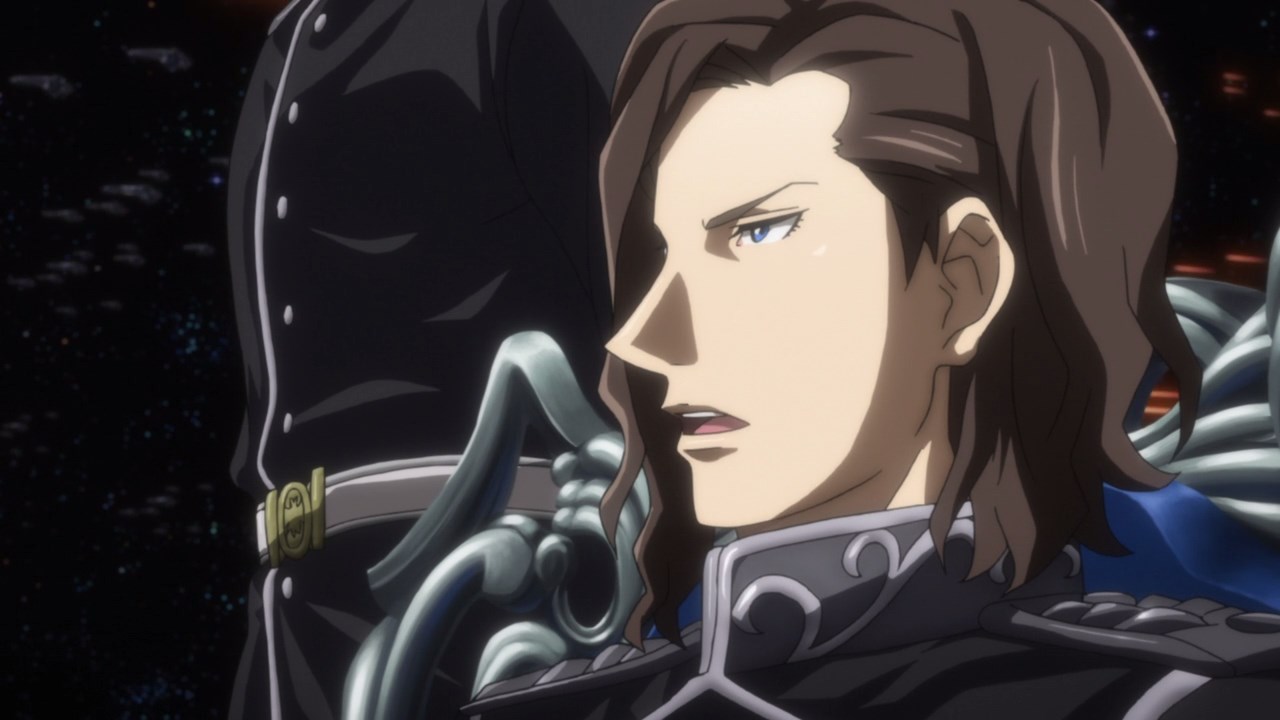 Of course, Admiral Reuenthal declined his offer as fighting a baron is a waste of time. Really, he and the other admirals from the Lohengramm-Lichtenlade Axis wants to win this civil war as soon as possible. 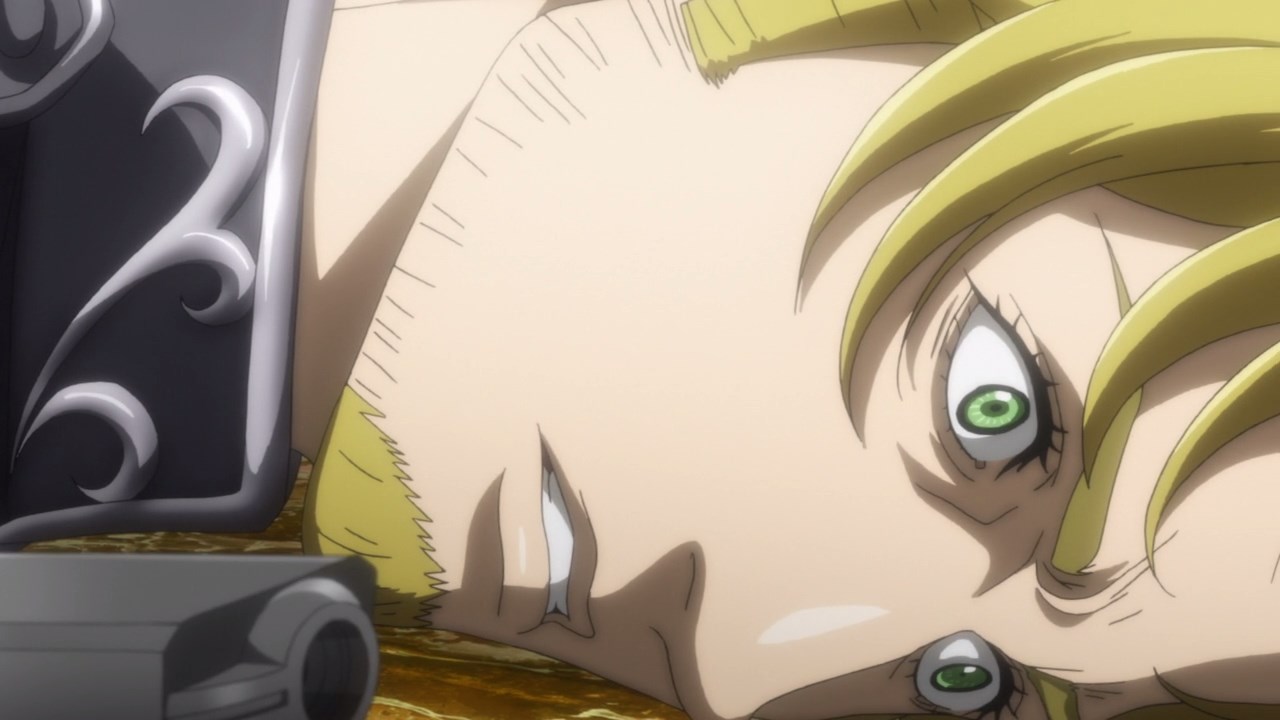 Oh yeah and speaking of Baron Flegel, he was shot down by his own men as they don’t want to continue their struggle against Commander-in-Chief Lohengramm and his fleet. 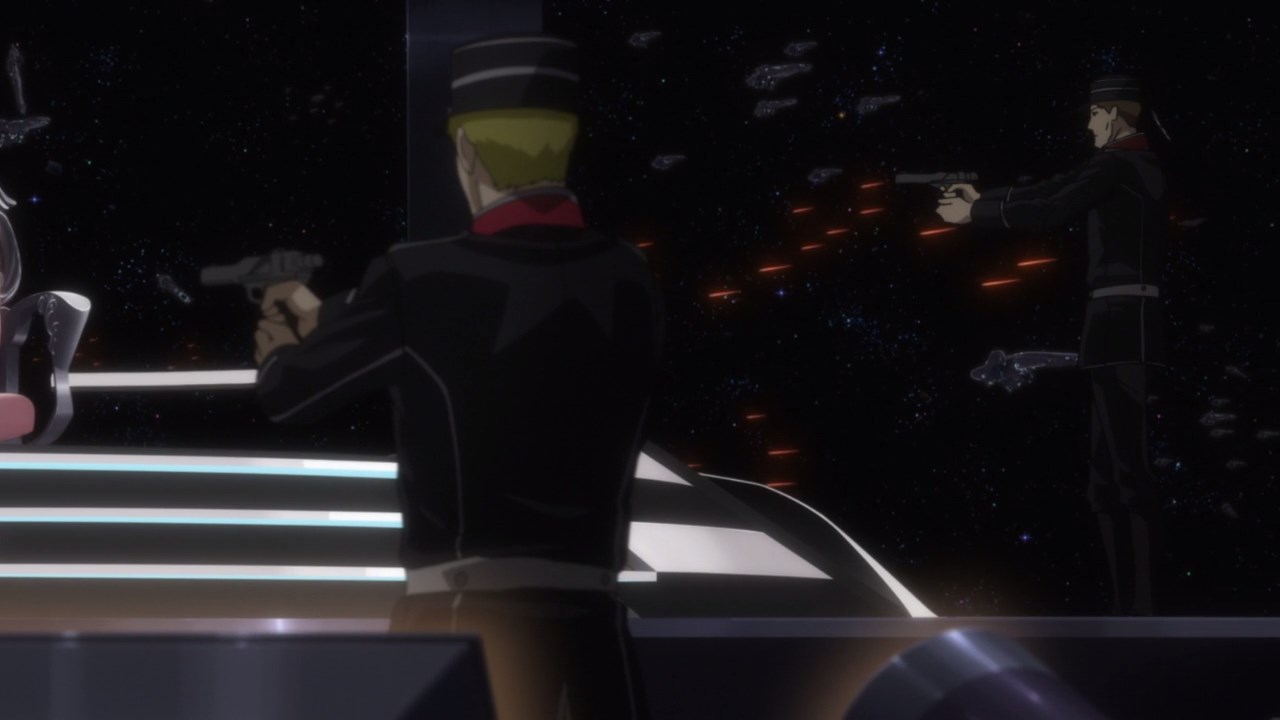 So with Baron Flegel’s death, looks like the flagship Alviss will make its retreat to Geiersburg Fortress, meaning that the Lippstadt Nobles Coalition is close to capitulation. 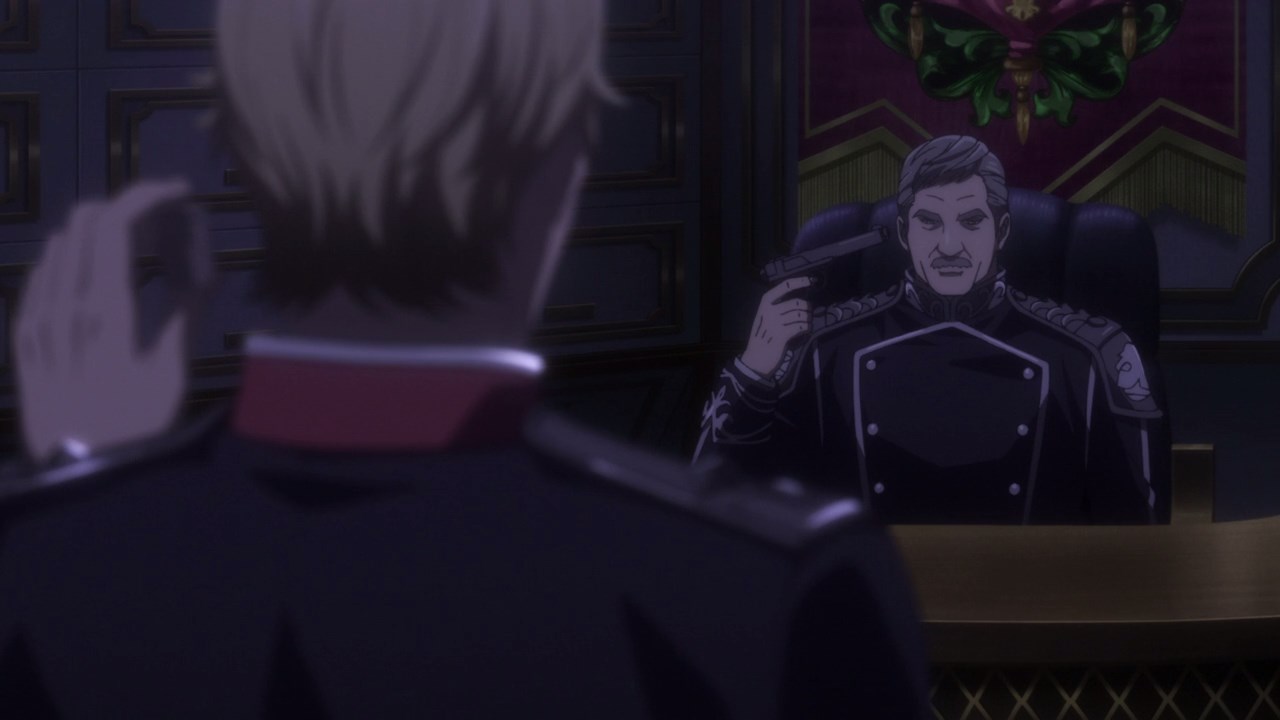 On the other hand, here’s Commander-in-Chief Willibald Joachim von Merkatz where he’s planning to end his life as continuing the war is pointless.

Unfortunately, the energy capsule from the blaster is removed by his subordinate, so therefore Joachim von Merkatz can’t commit suicide. 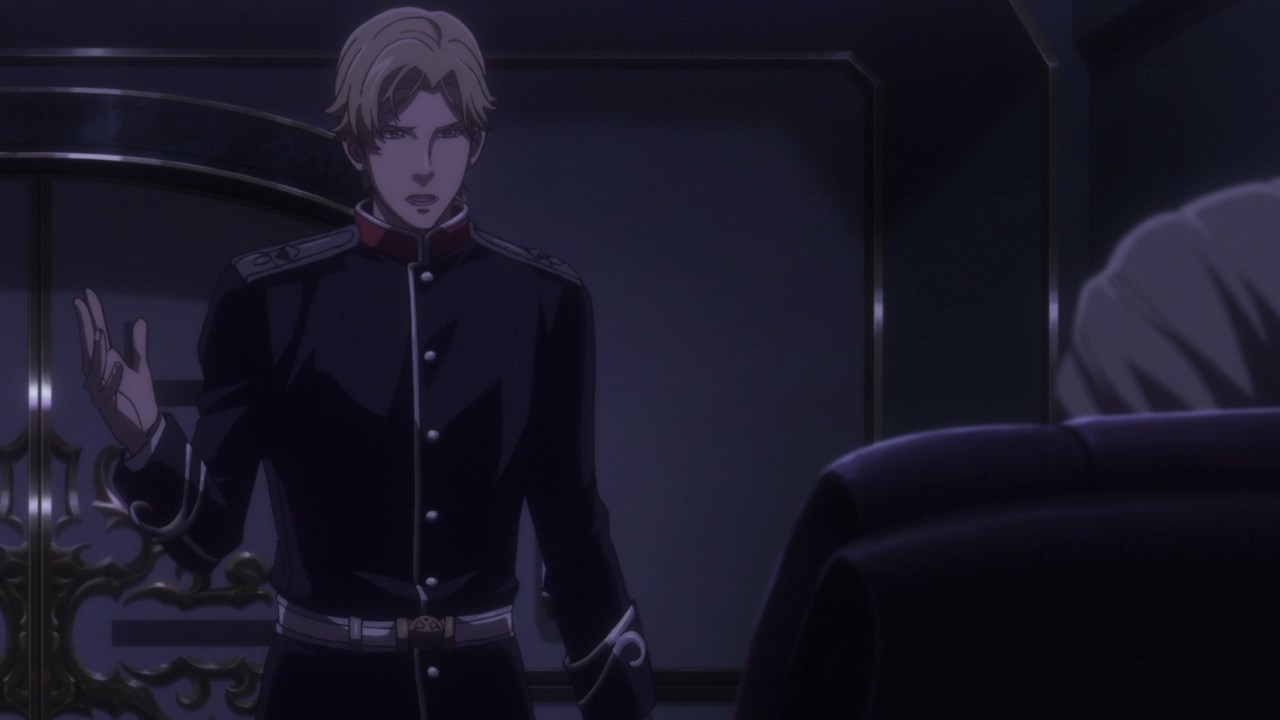 Well, it’s better to live as a commanding officer for the Alliance rather than to die as a war prisoner within the Empire. 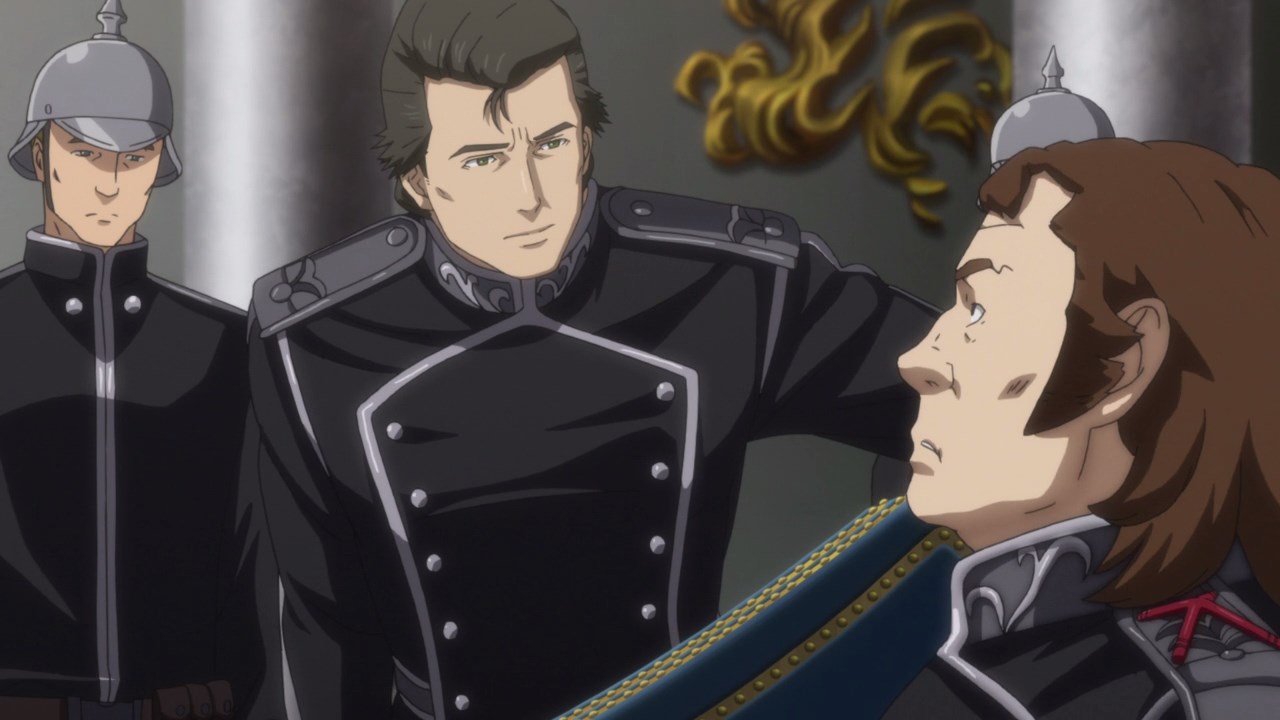 One last thing, it seems that Duke Otho von Braunschweig will have to flee along with his family as Commodore Ansbach is escorting him to the escape pod. 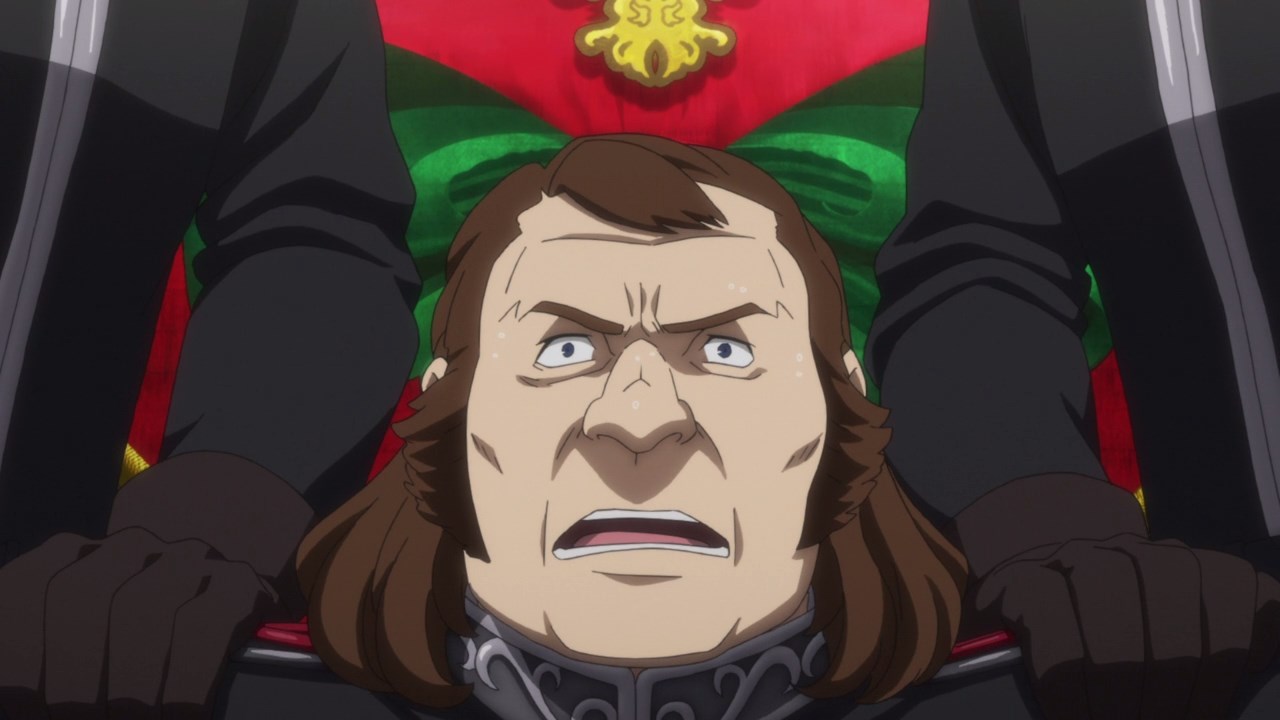 Unfortunately for Duke Braunschweig, his loyal soldiers have decided to betray him as Commodore Ansbach and his men hold the duke firmly in order to force Braunschweig to drink the kool-aid. 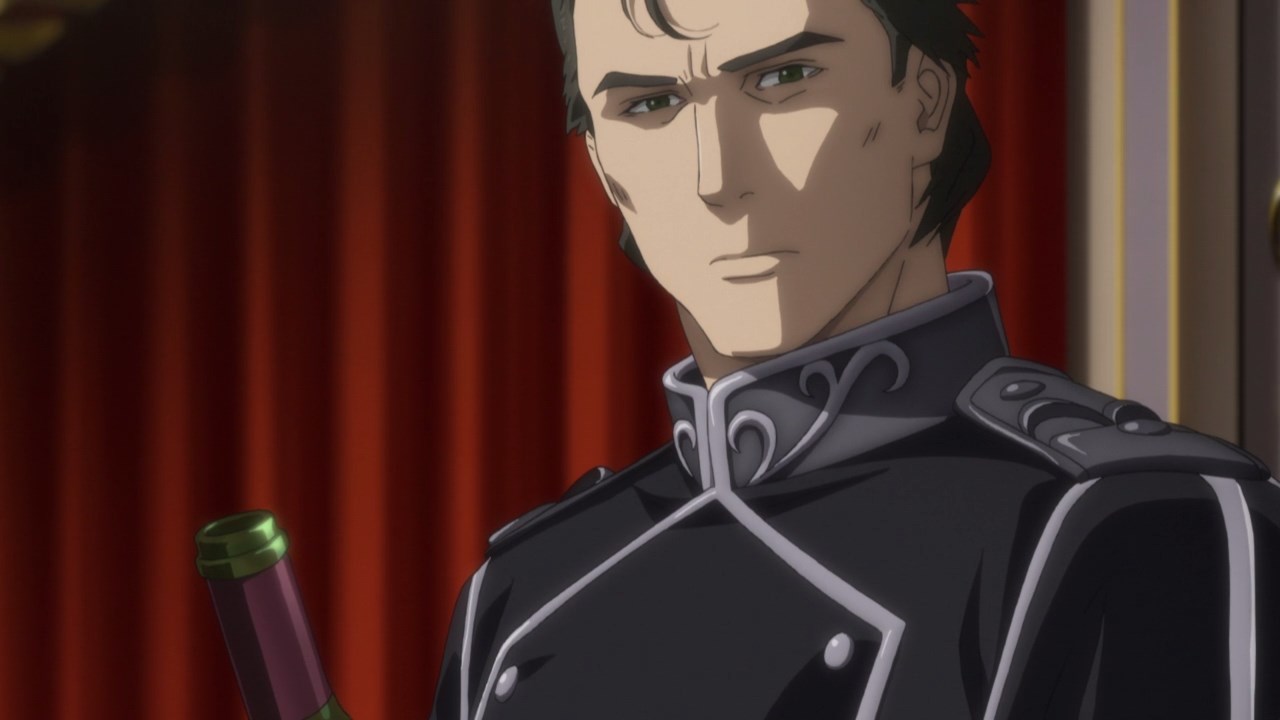 Well actually, it’s red wine with cyanide mixed in as Commodore Ansbach will make sure that Duke Braunschweig will have a painless death. Better than being beheaded and then mocked by everyone. 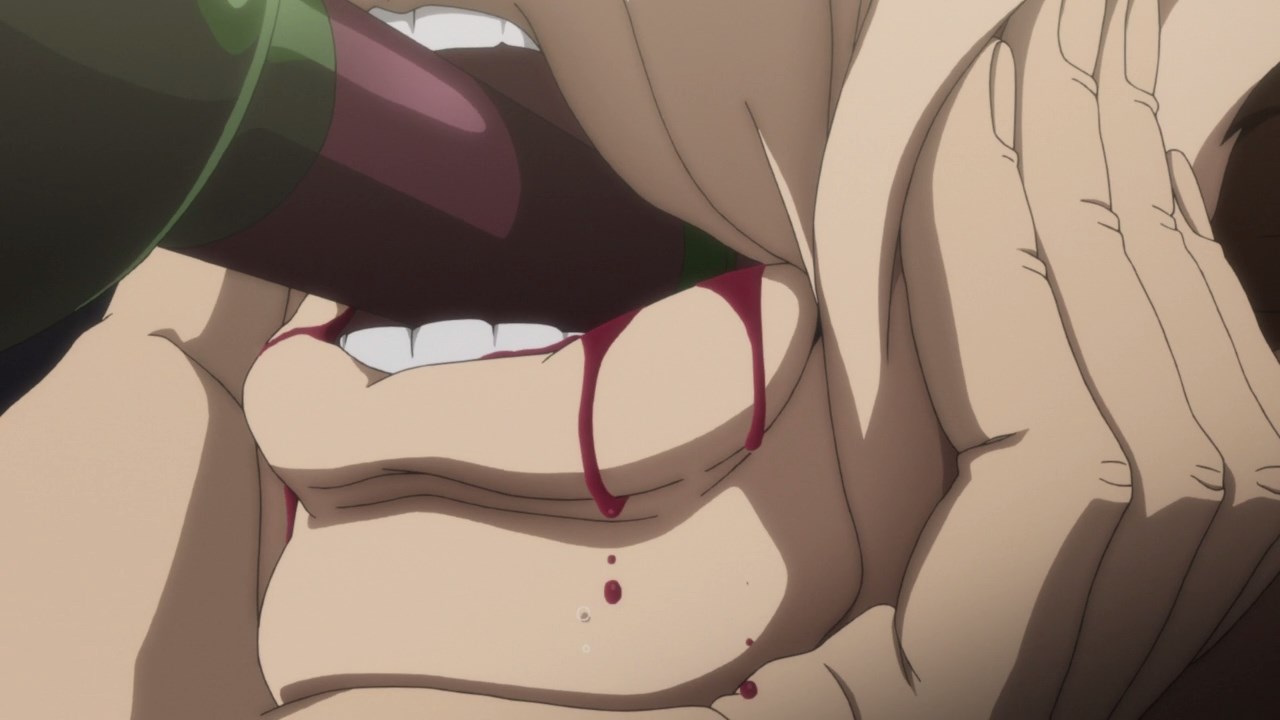 With that said, Duke Otho von Braunschweig was forced to drink the cyanide-laden wine until his heart stops beating.

While he wants Marquis Reinhard von Lohengramm to spare him and his family, the young blonde commander-in-chief won’t spare the duke no matter how far he would beg his life. 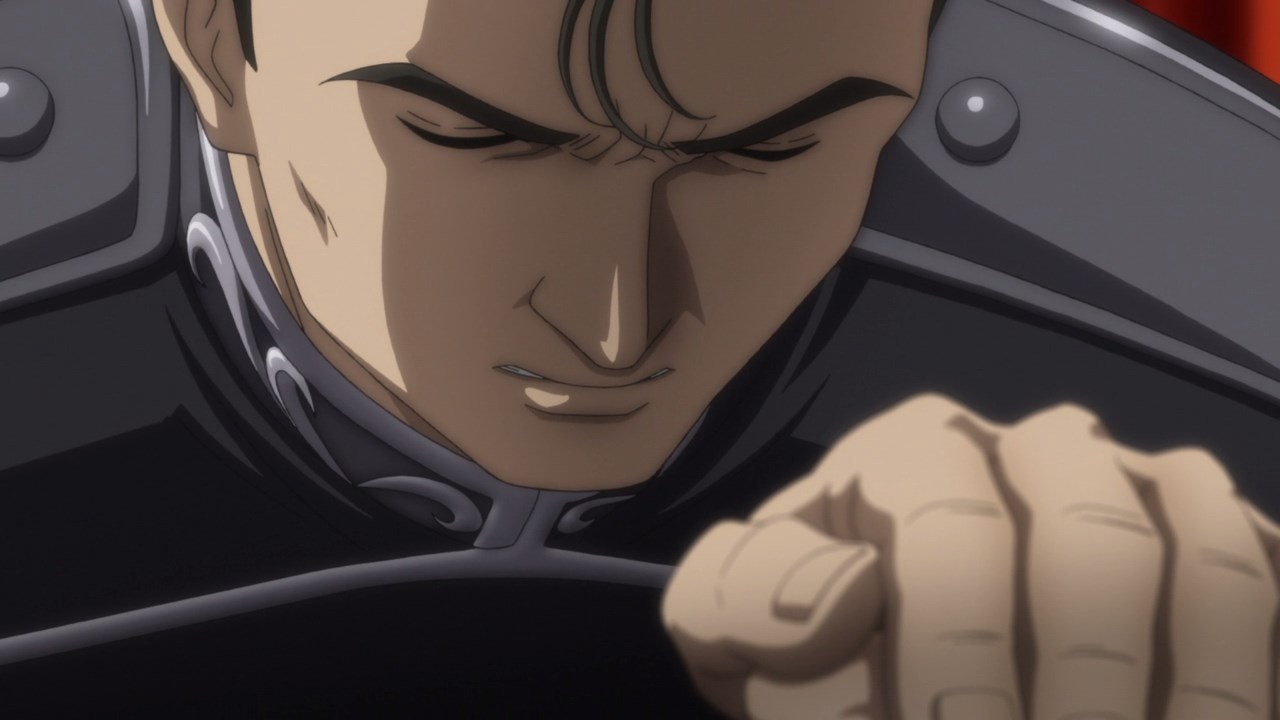 In any case, the last remnant to the Goldenbaum Dynasty has fallen, although Commodore Ansbach will make sure that he’ll murder Reinhard von Lohengramm to avenge Otho von Braunschweig. 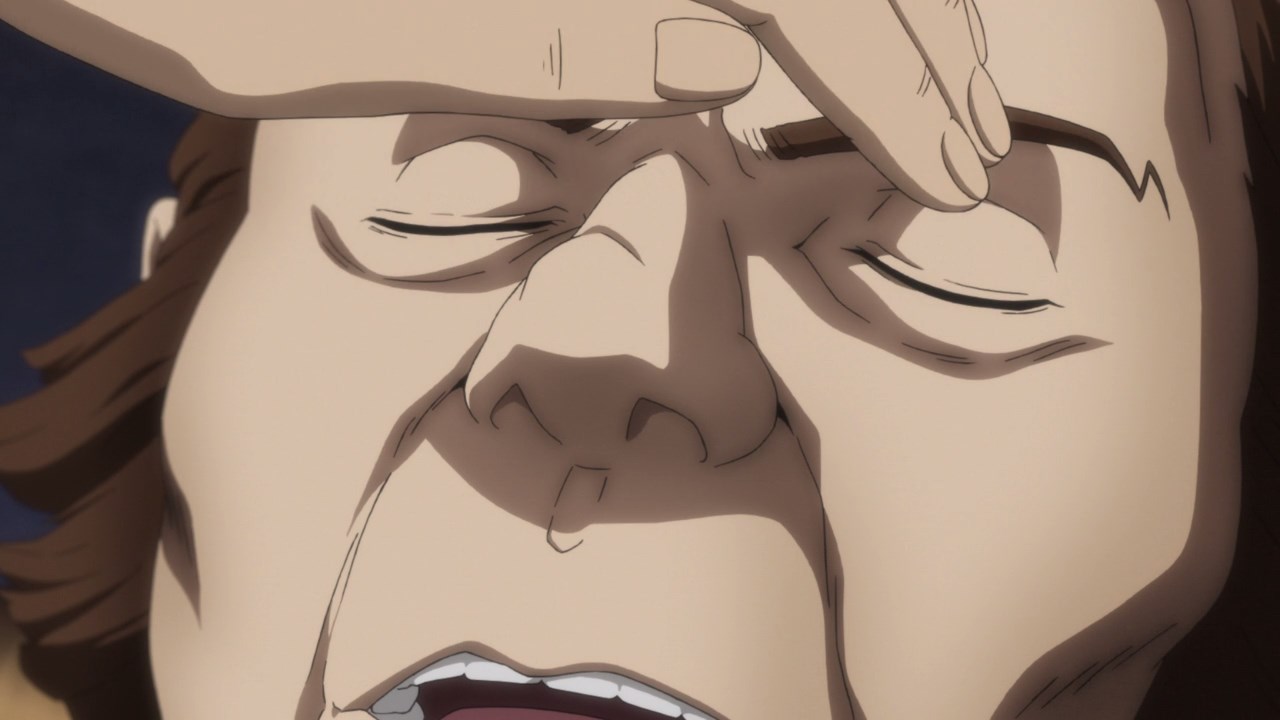 Anyways, the Lippstadt War is finally over as the Lohengramm-Lichtenlade Axis took control of the Geiersburg Fortress.

Of course, we’re not yet done as there’s still 2 episodes to go in which there are still some resistance left from the coalition. I’m scared on what’s gonna happen next time.