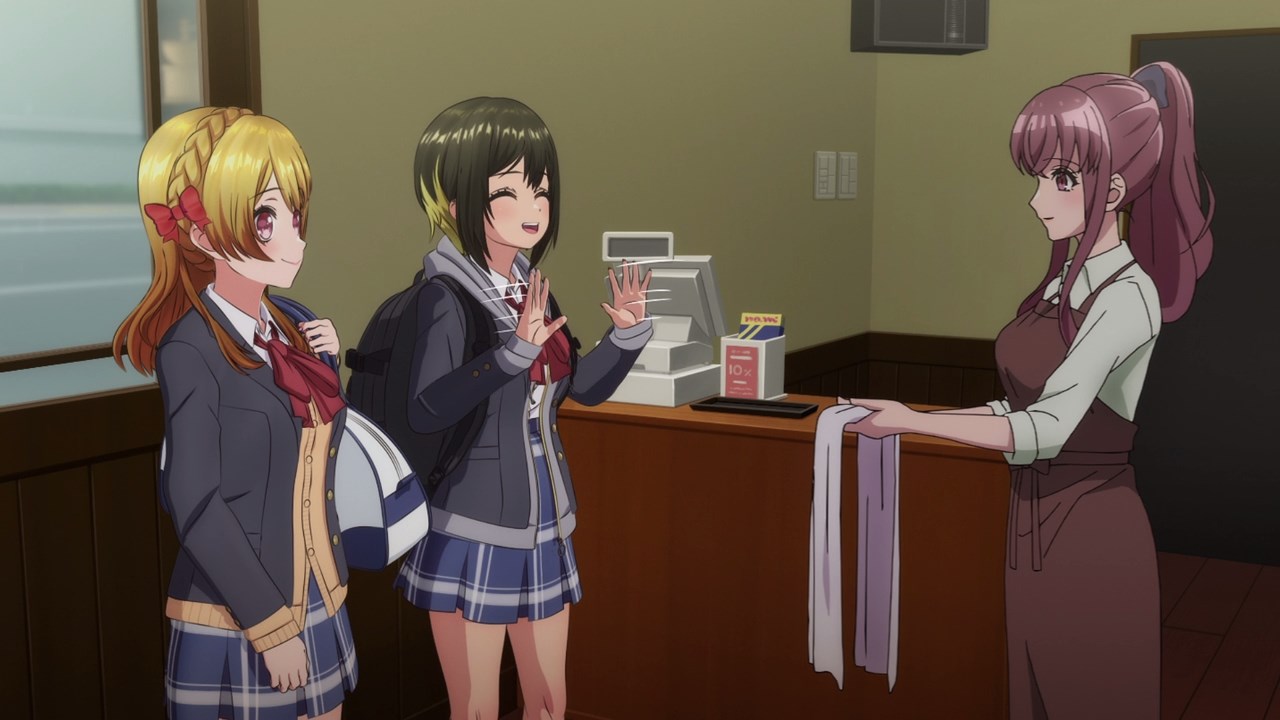 Here’s Rinku Aimoto and Maho Akashi where they’re greeted by Airi Amano at Cafe Vinyl, although they don’t need to dry themselves up with a towel. 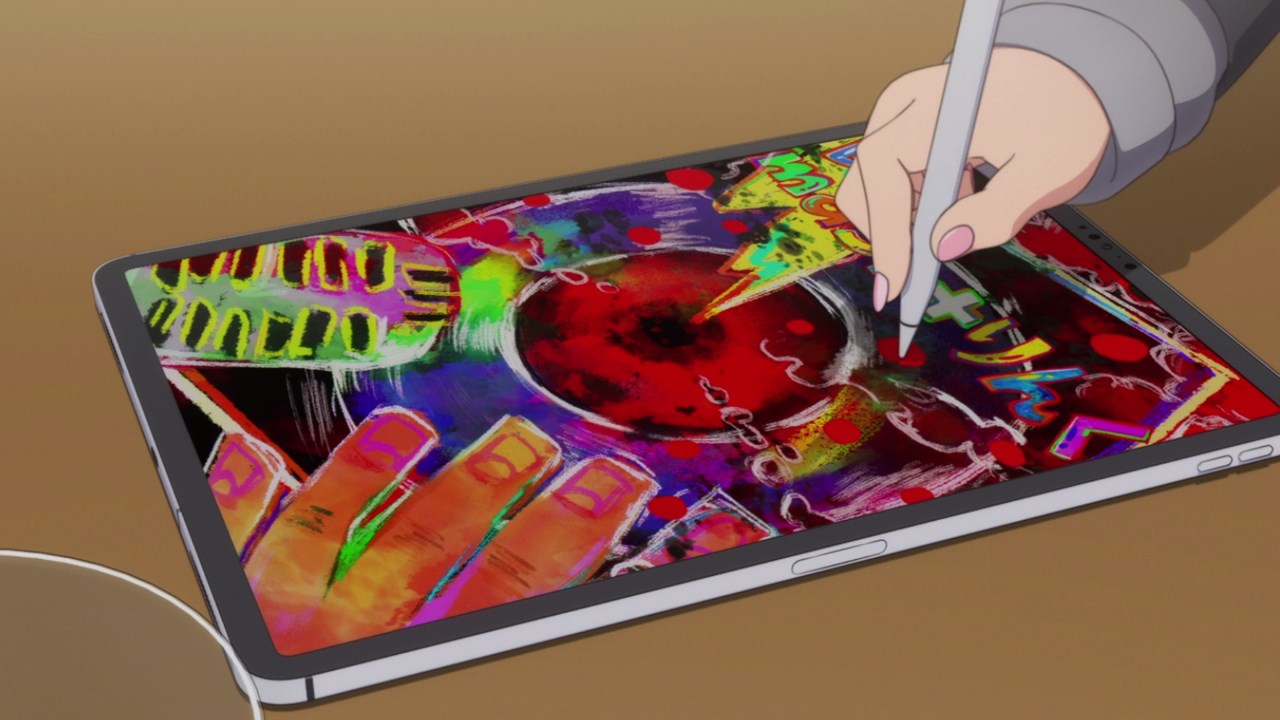 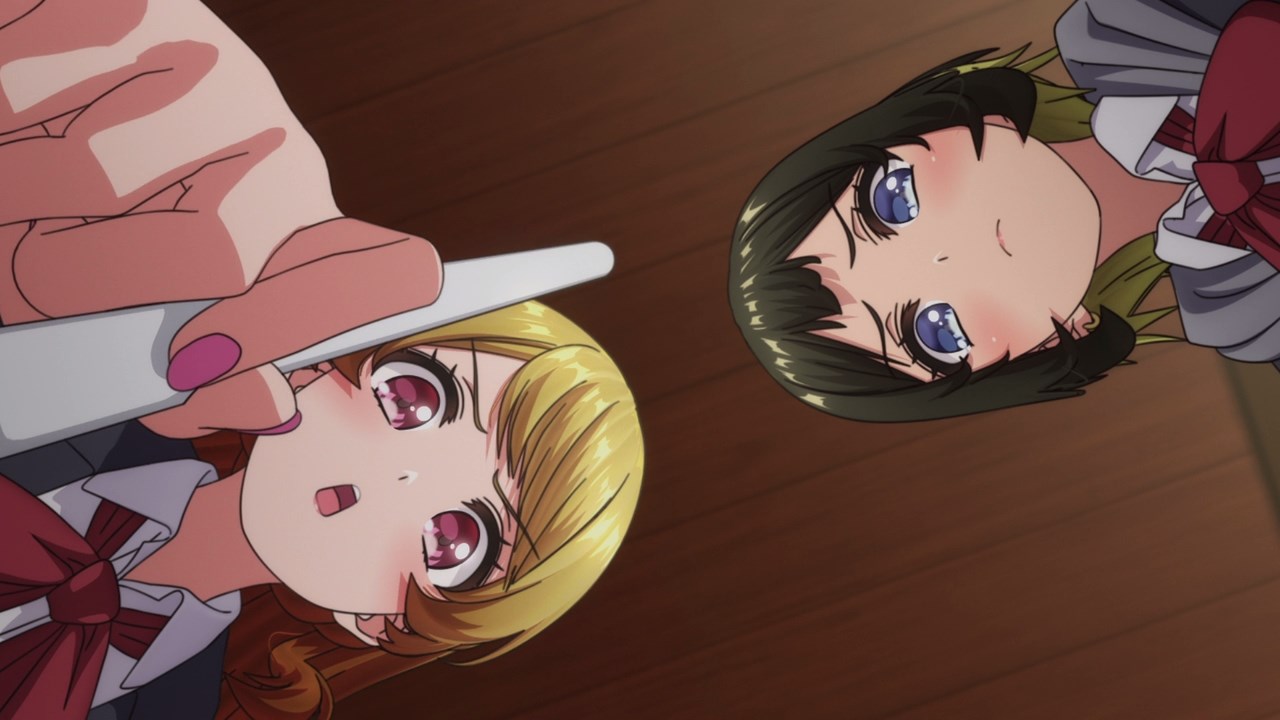 On the other hand, seems that Rinku and Maho are making their poster for their next live and man, it looked atrocious that it’s pure incoherent chaos. 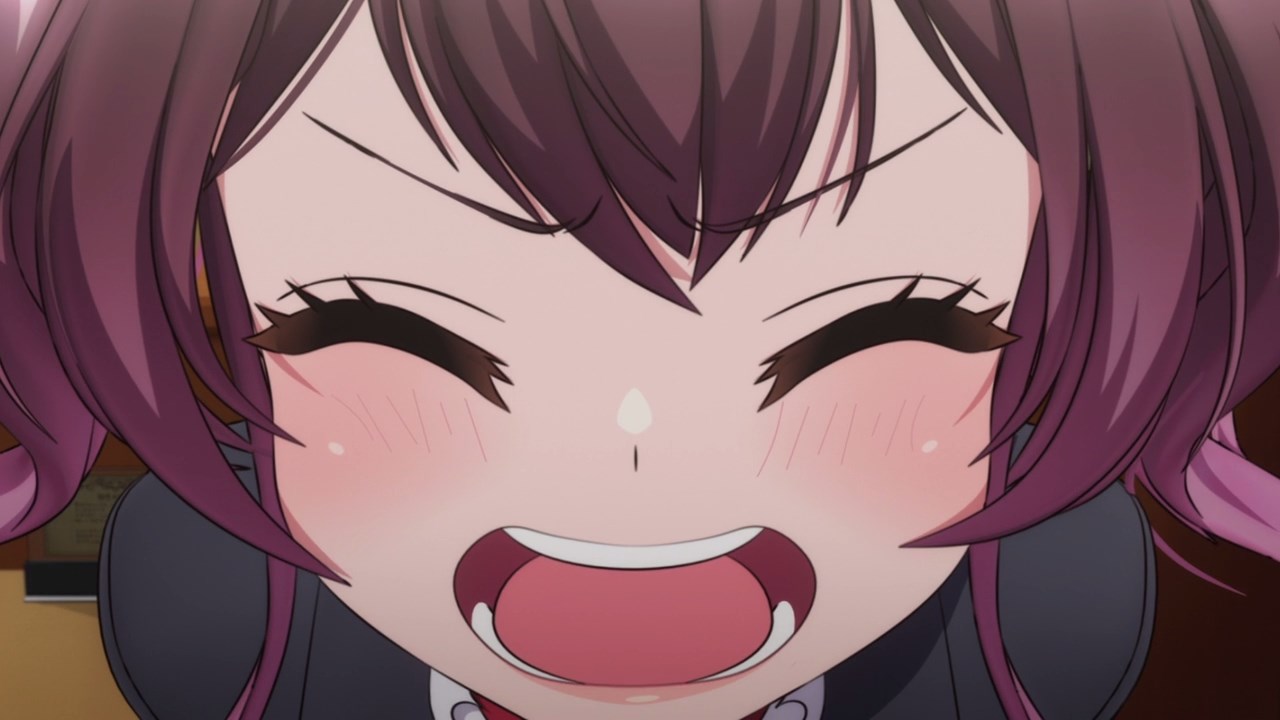 So much chaos in fact that a certain Muni Ohnaruto called them out for making an ugly poster. Then again, there’s no need for Muni-chan to scream at them. 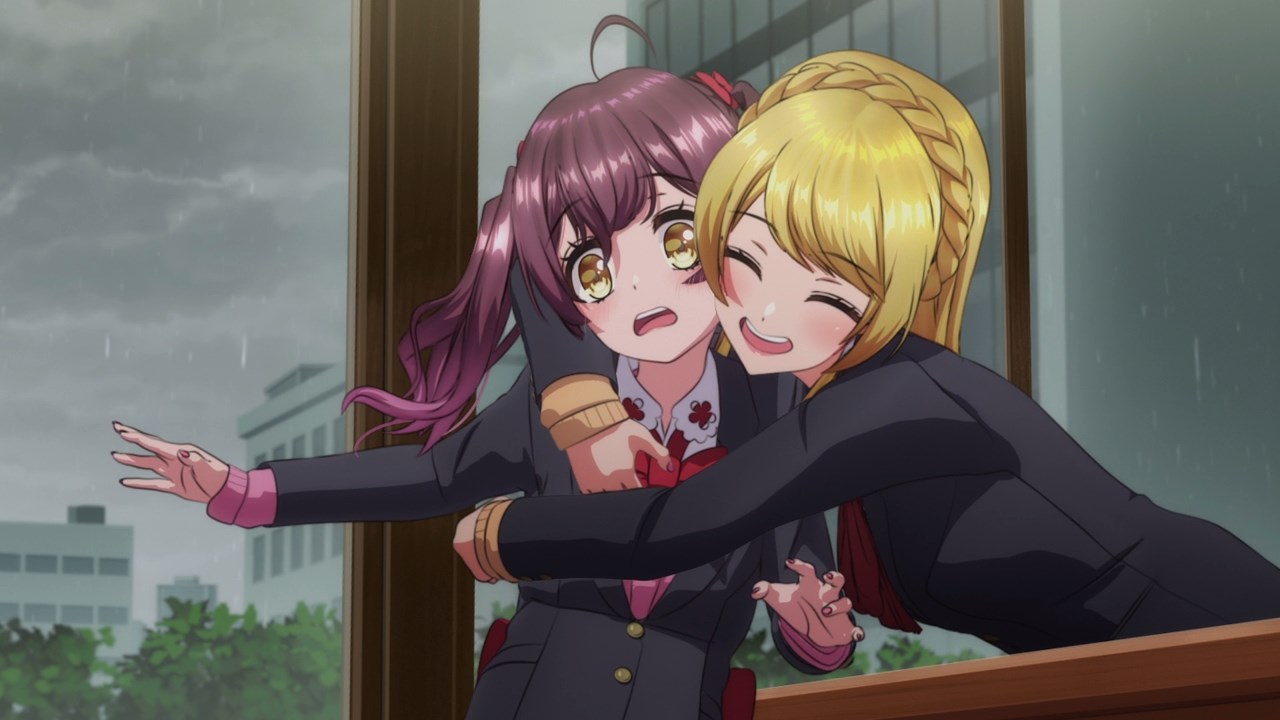 Anyways, looks like Rinku is happy to see Muni again as it turns out that they’re childhood friends.

Oh yeah, turns out that Ohnaruto is an illustrator, meaning that I wanna see what she’s capable of. 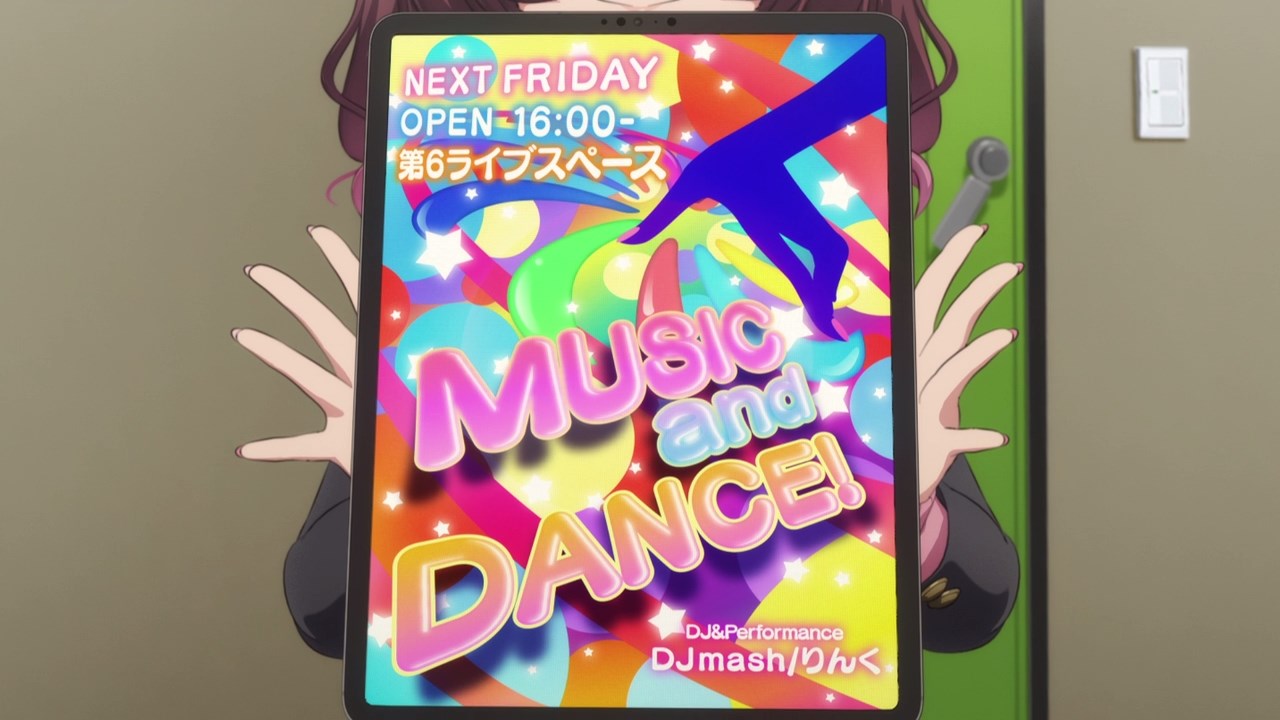 And as you can see, Muni made a nice poster for their upcoming live concert. Well, looks like Ohnaruto’s job is done but Aimoto wants her friend to join the team as a video jockey or VJ for short.

Then again, while she’s good at making drawings, Muni doesn’t know how to become a VJ. 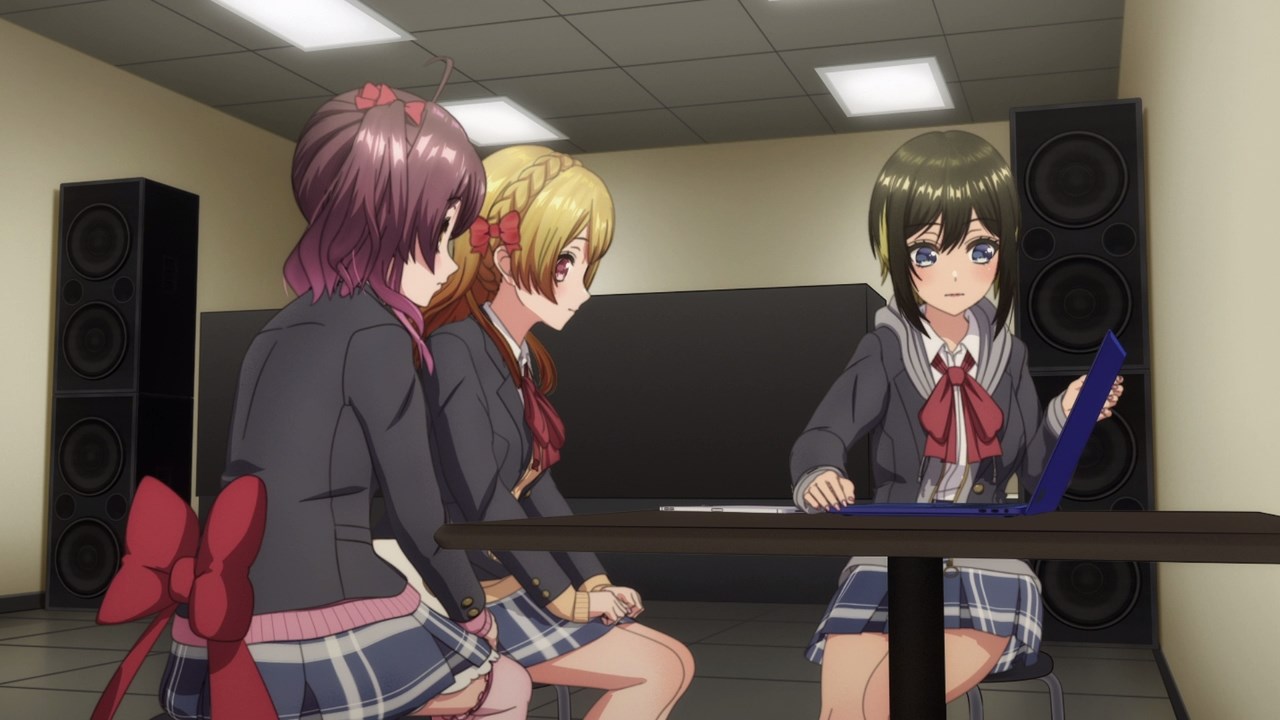 Well, Maho Akashi will help her out as she found a tutorial video about VJs. Oh yeah, and this tutorial video is made by one of the members of Peaky P-Key. 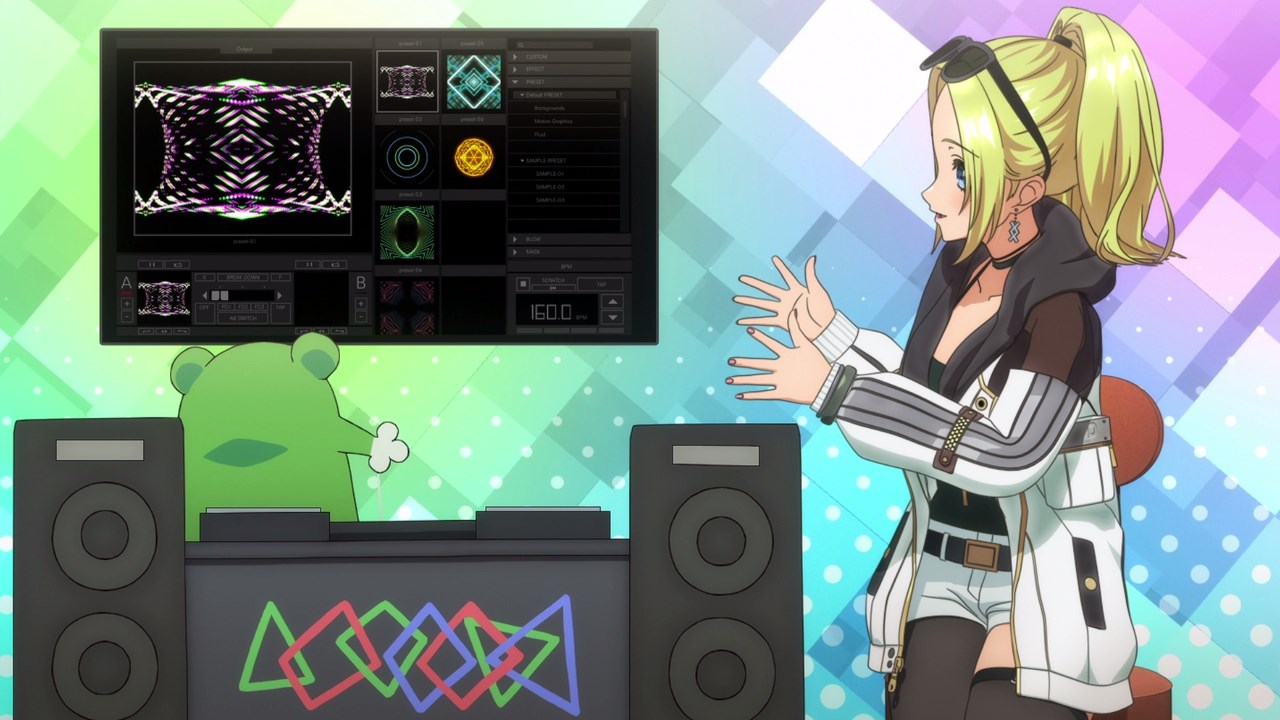 Specifically, Jennifer Yuka Sasago as she’s joined by Esoran the Frog. Anyways, this tutorial video explains how to make visual effects that would match up with the song. 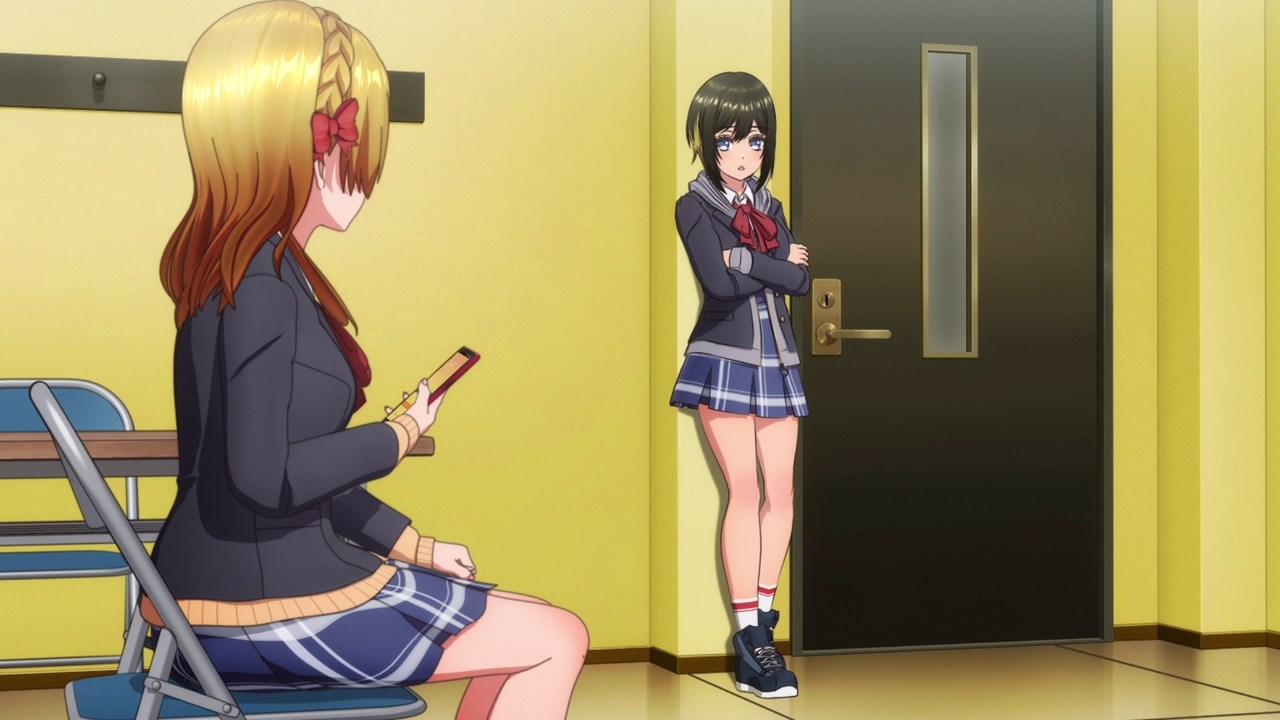 Of course, while she managed to learn how to become a VJ, the problem is that Muni Ohnaruto got a stage fright on the day of the concert as Maho Akashi is worried that the live will be cancelled or they’ll continue without her. 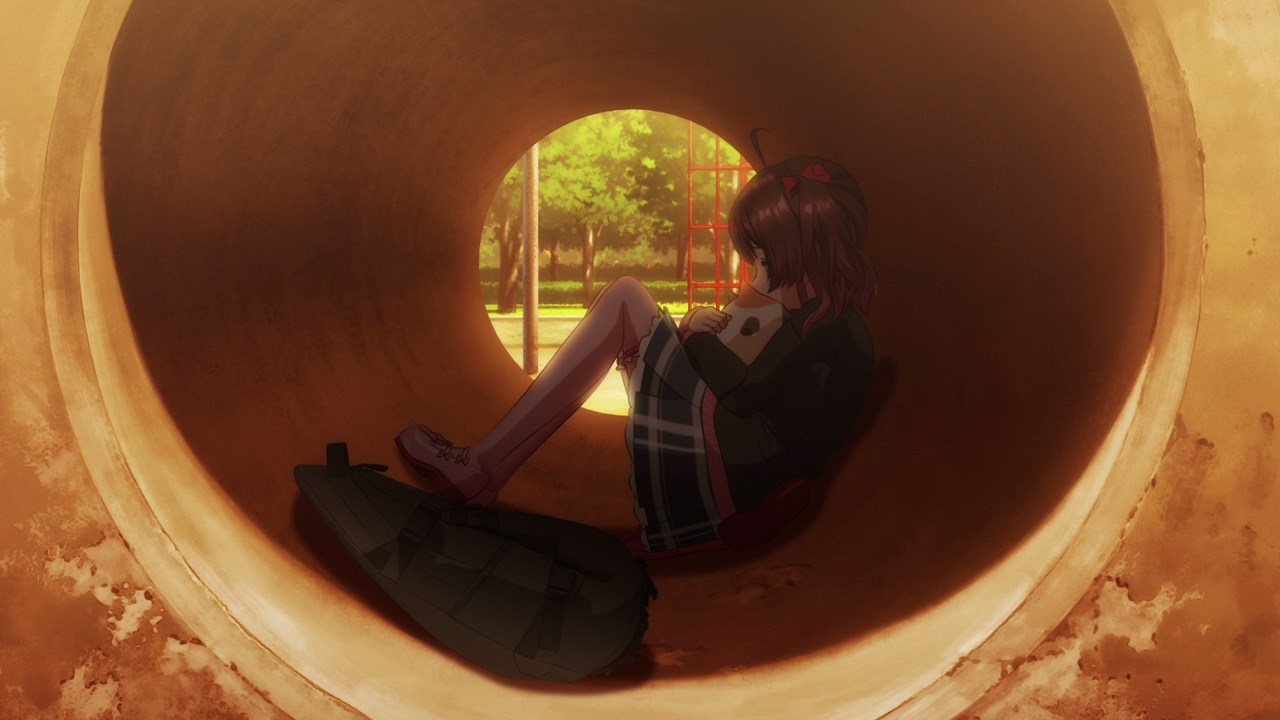 And here’s Muni-chan where she’s hiding at the playground. So despite being a good illustrator, she’s actually shy where Ohnaruto has trouble putting up a show in front of a live audience. 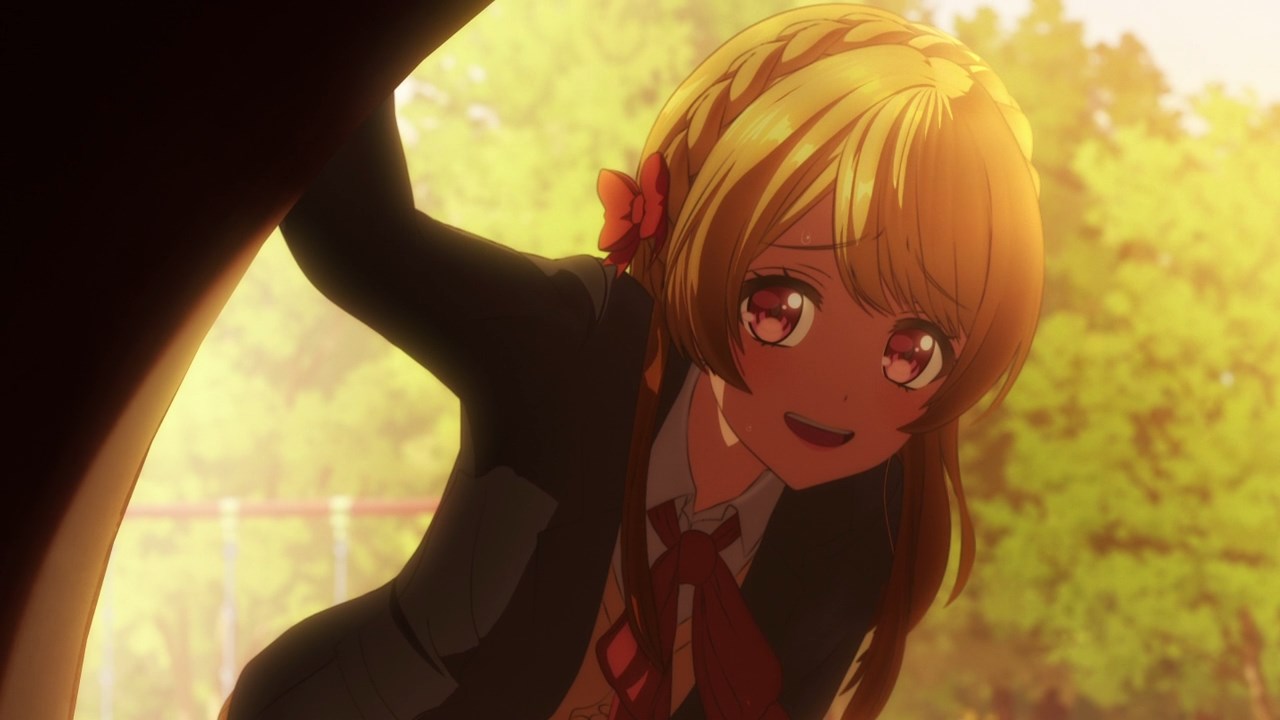 Well, that’s until Rinku Aimoto shows up where she’s here to save Muni Ohnaruto. C’mon, they’re childhood friends after all and by the way, both girls watched Airi Amano and Shano Himegami’s concert on that day. 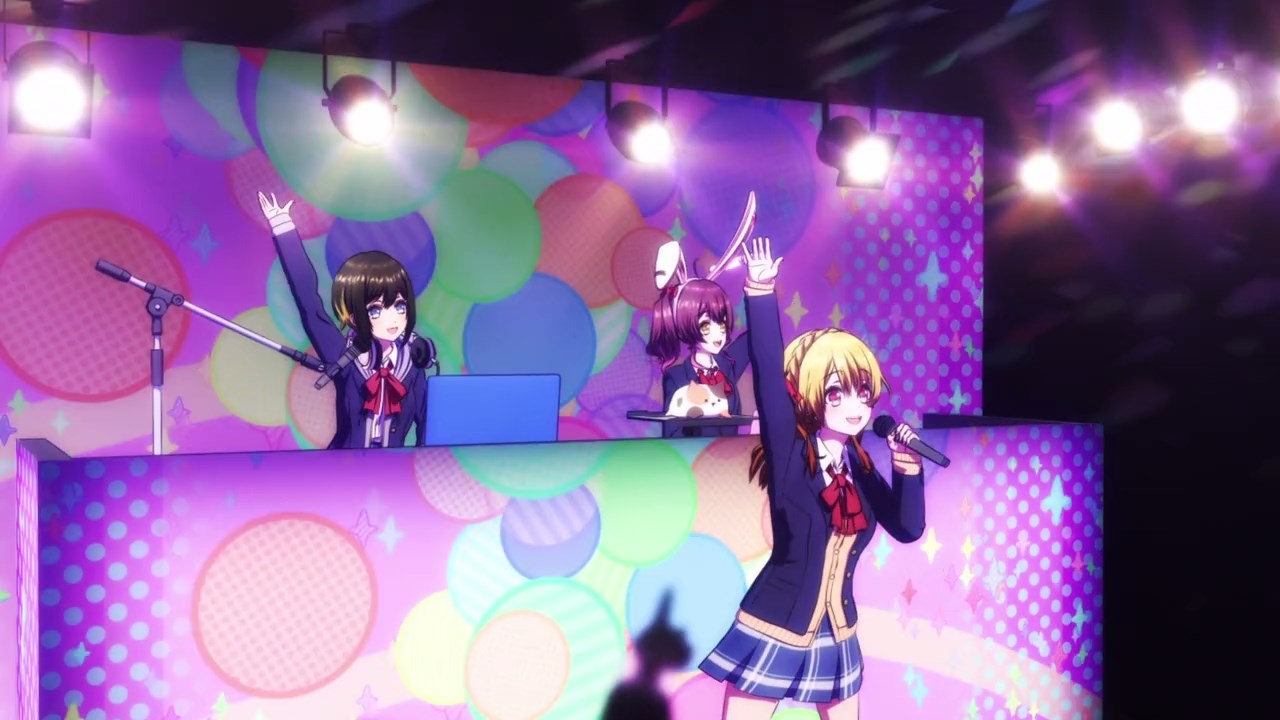 And so, the concert went ahead as Rinku, Maho, and Muni put up a fantastic show even though they used the same song as the previous episode. Man, when will they make an original song? 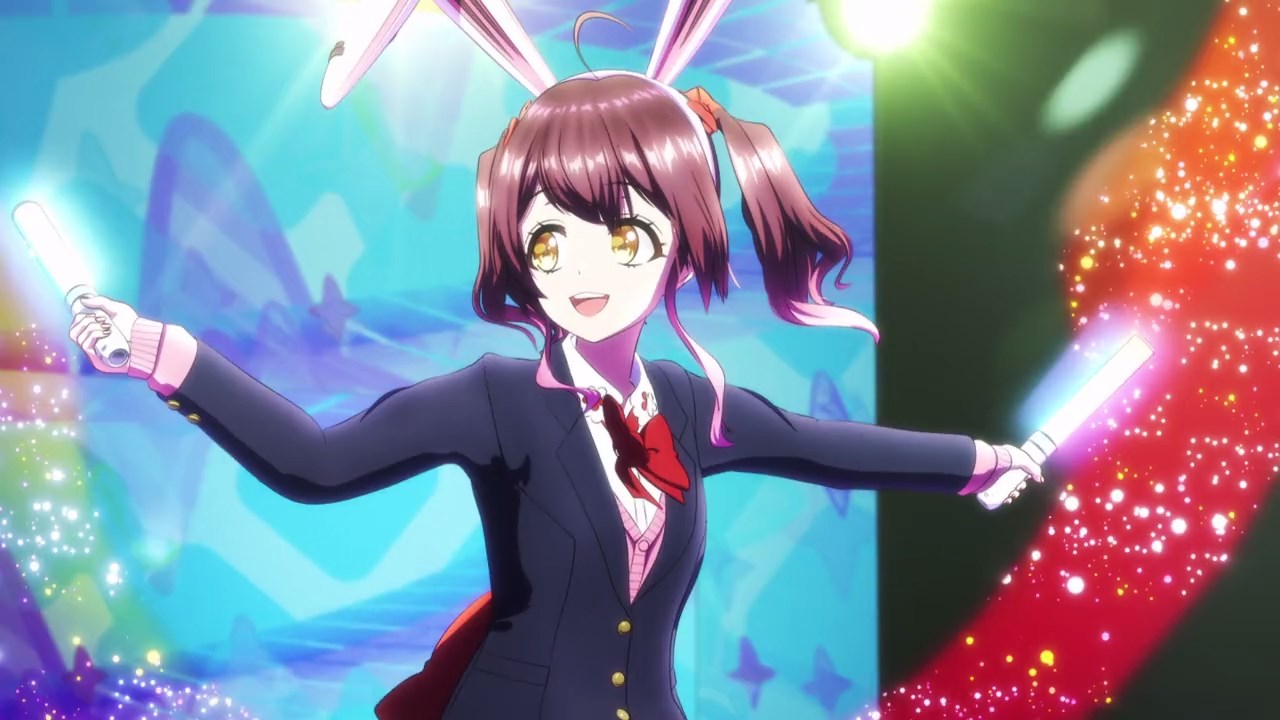 Speaking of Muni Ohnaruto, she put up a stunning performance as she’s not only did well as a VJ, but Muni swing her kingblades like a madwoman!

But that’s about it for this episode and while Rinku and Maho got a new member, I think they need one more member to form a complete DJ unit.