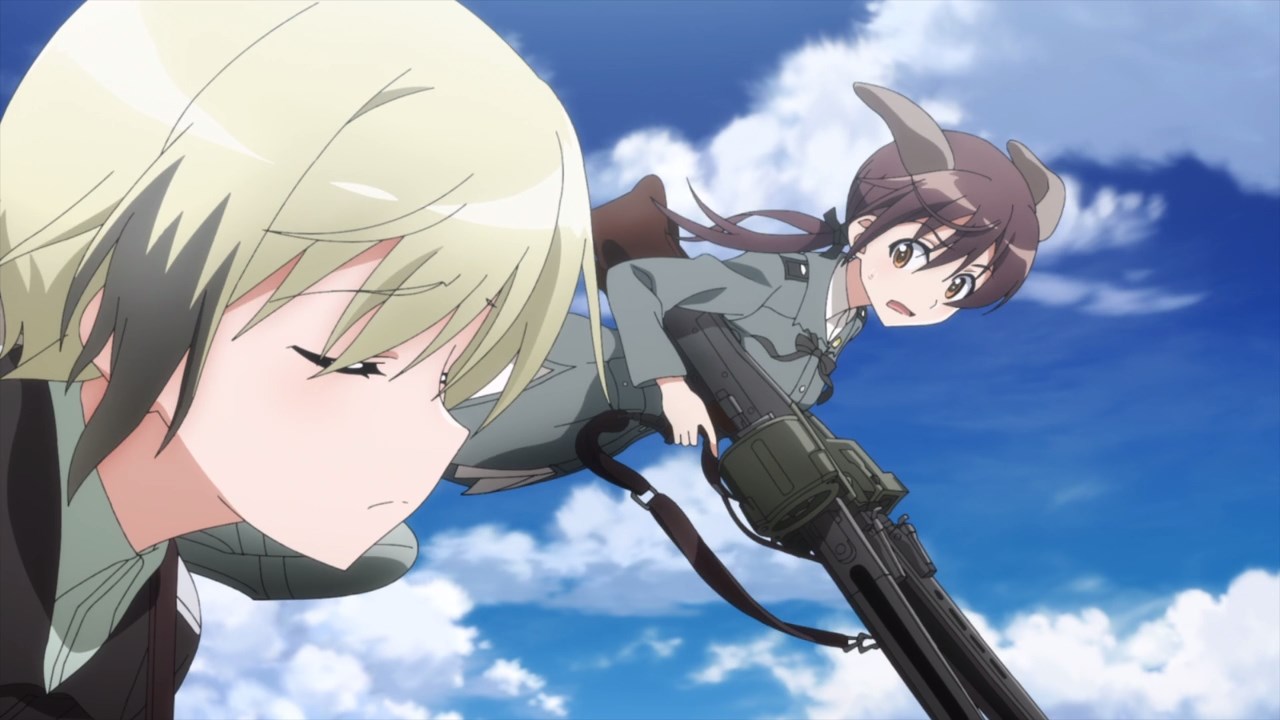 On this episode, let’s talk about Erica Hartmann and Gertrud Barkhorn as they’re conducting a reconnaissance mission in Kiel. But, the port is currently under Neuroi control so the military command wants to retake it as soon as possible and launch an offensive towards Berlin.

With that said, both Hartmann and Barkhorn are searching for Neuroi presence within Kiel, although the former is getting hungry since it’s a long mission. 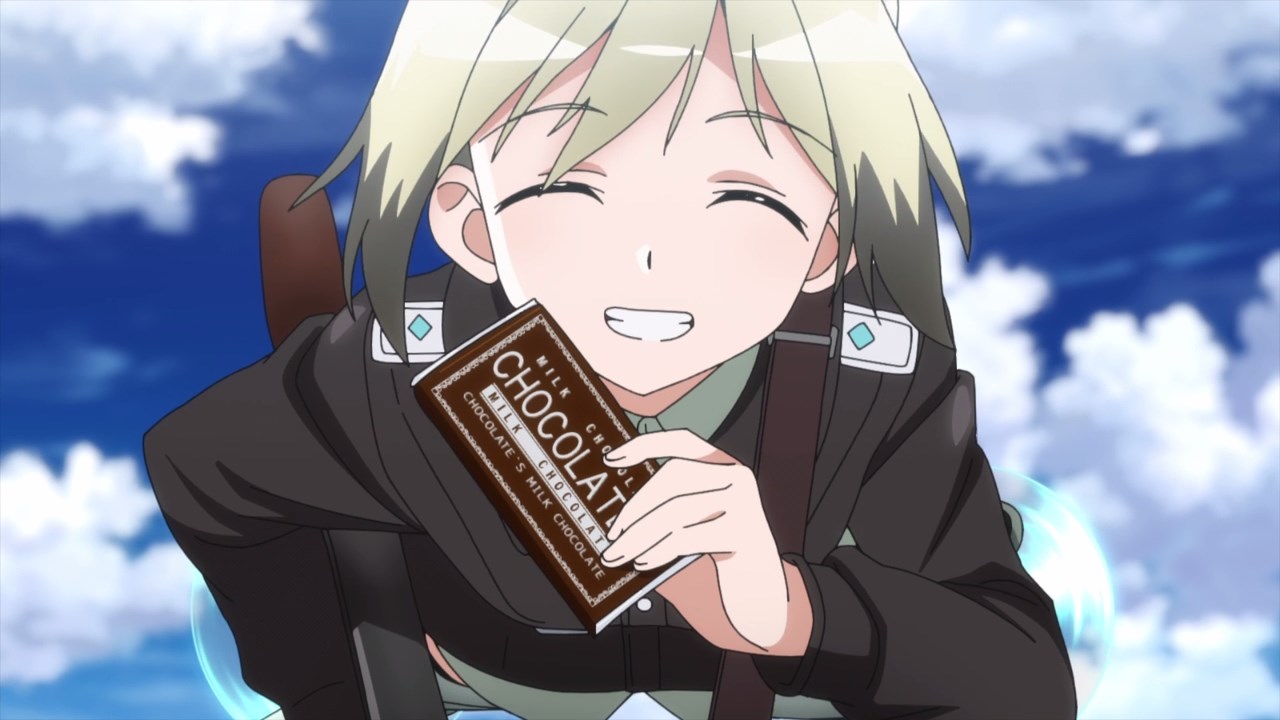 But hey, Gertrud has a chocolate bar which Erica is happy to eat it. I mean, they can’t fight on an empty stomach. 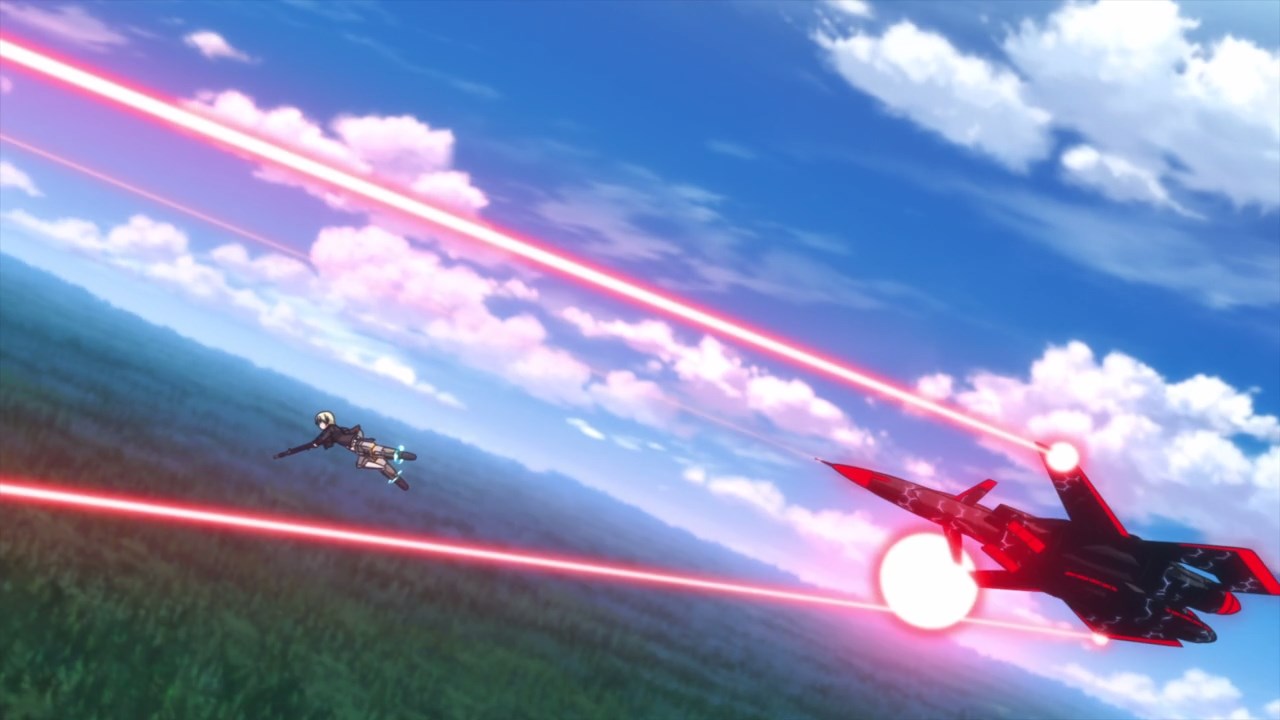 Unfortunately, their reconnaissance mission got interrupted when a Neuroi appeared. And really, this one looked like a modern fighter jet where it’s faster and hit harder. 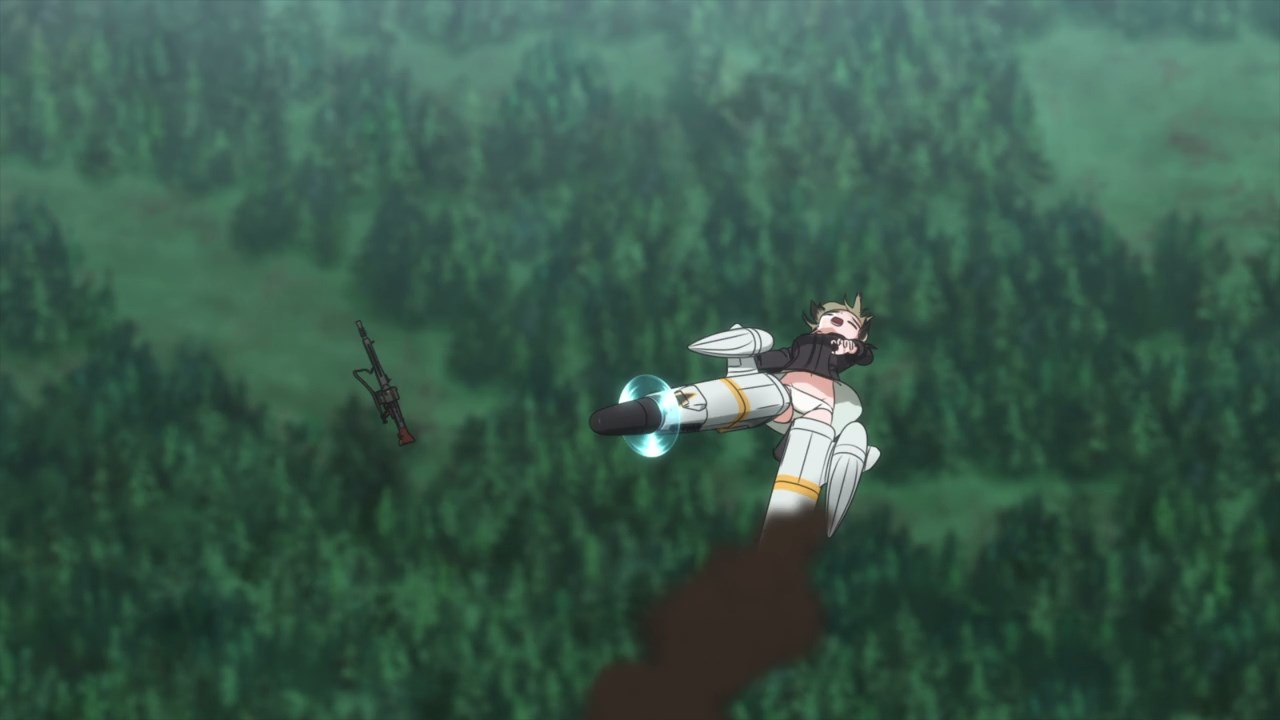 Thus, the Jet Neuroi claimed its first target as Erica Hartmann was shot down. Man, this can’t be happening! 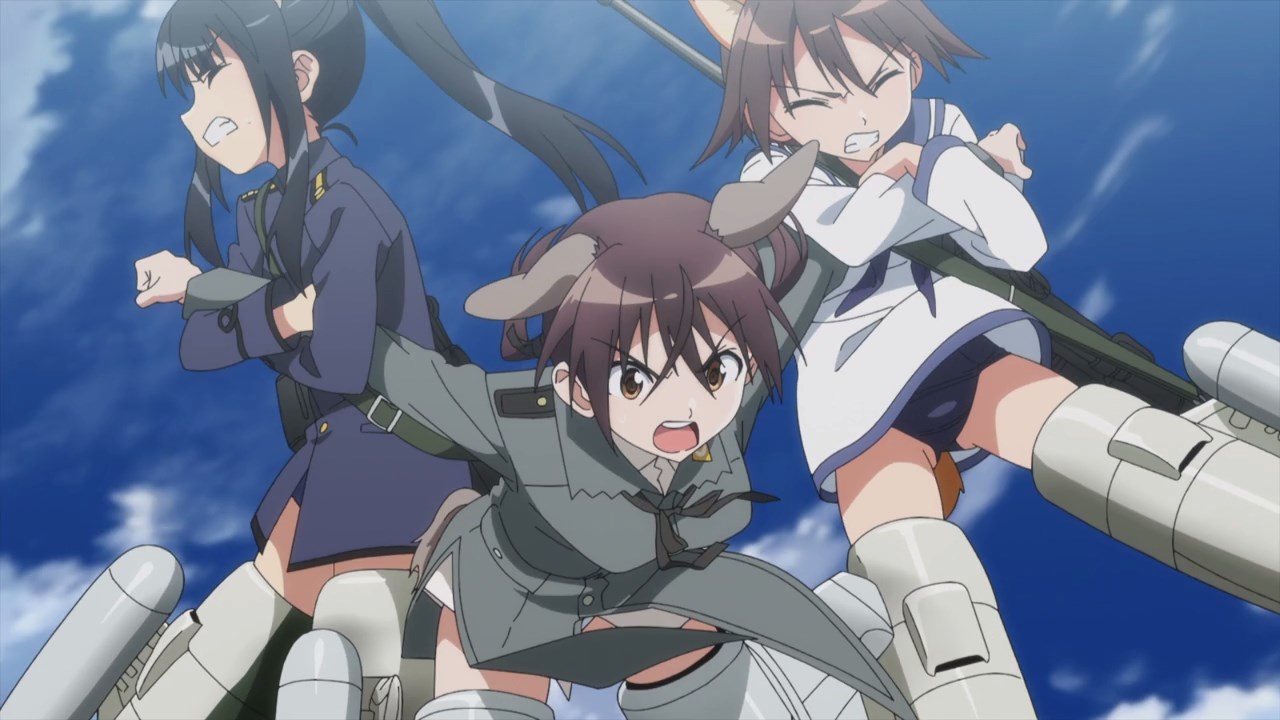 And while Gertrud Barkhorn tries to rescue her teammate since she really cares about Hartmann, both Yoshika Miyafuji and Shizuka Hattori stopped her.

Looks like they’ll have to retreat for the time being but I wonder if Erica Hartmann is okay? 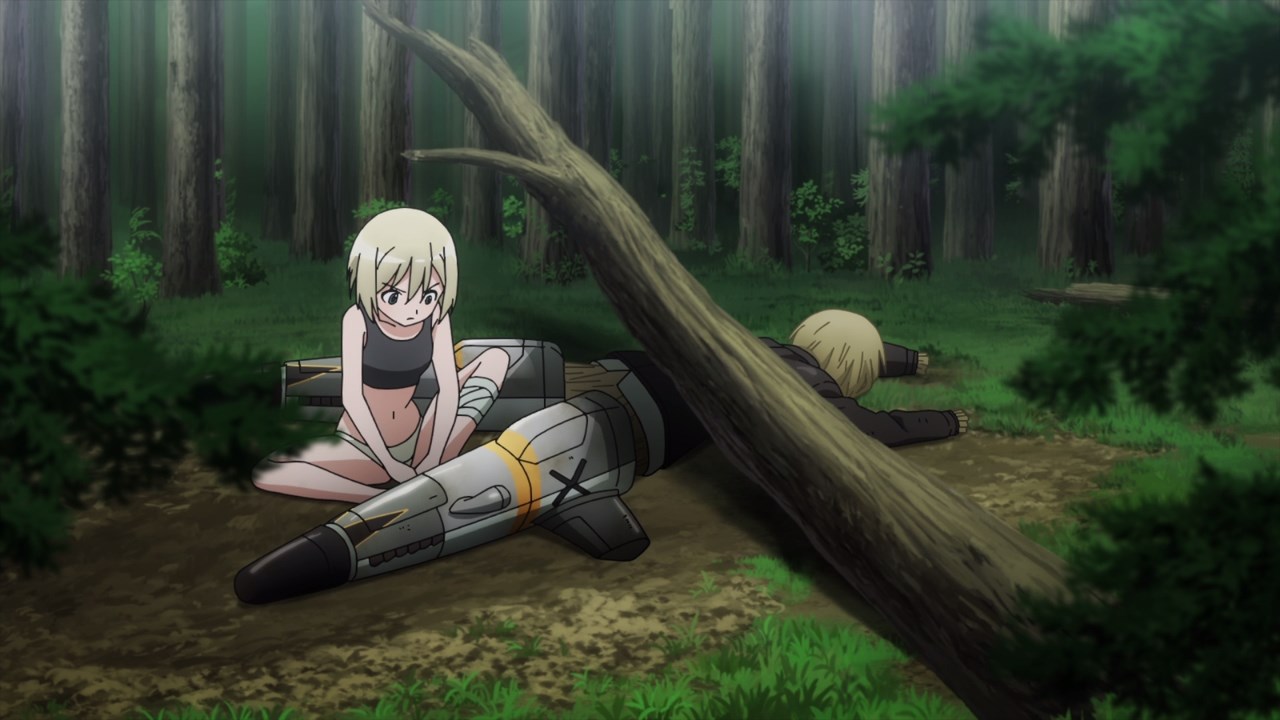 Well, Erica is alive as she’s currently fixing her Striker Unit, which she put it on this straw dummy. Of course, if her allies saw that, they would think that Hartmann has died. 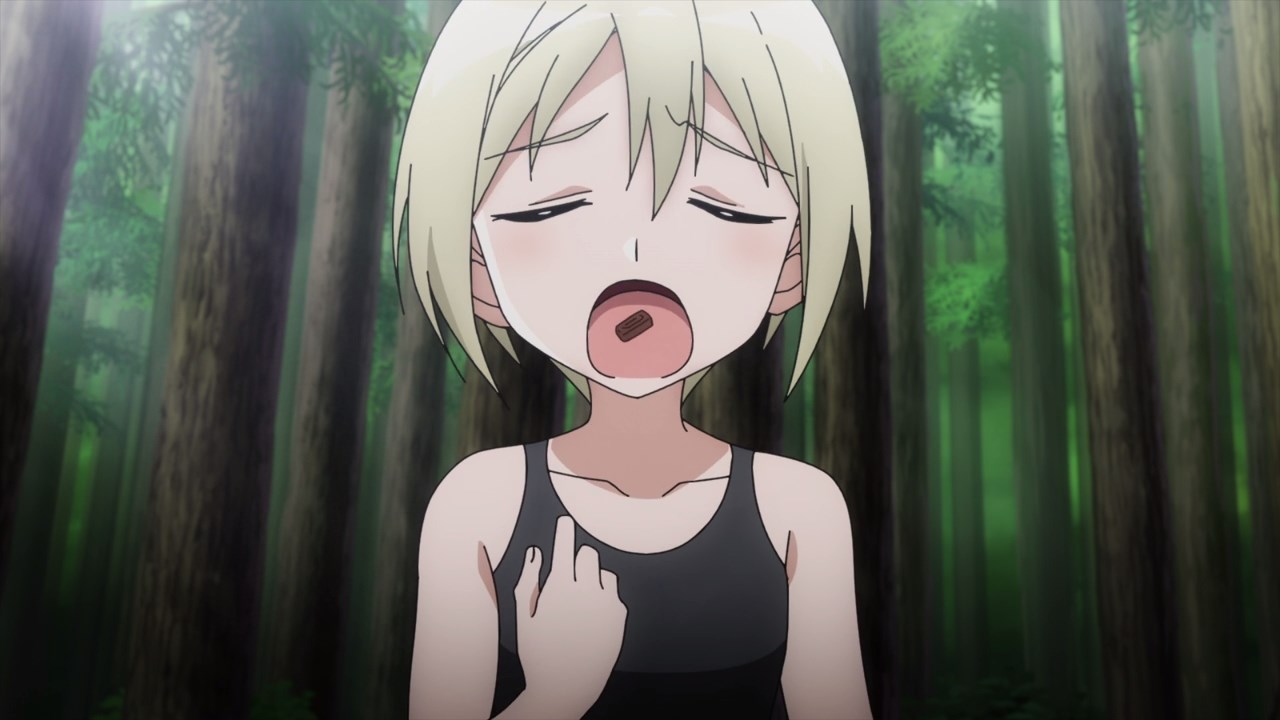 Oh yeah, and Erica still has Gertrud’s chocolate bar, but she can’t eat all of them ’cause Hartmann might get hungry again while fixing her Striker Unit. 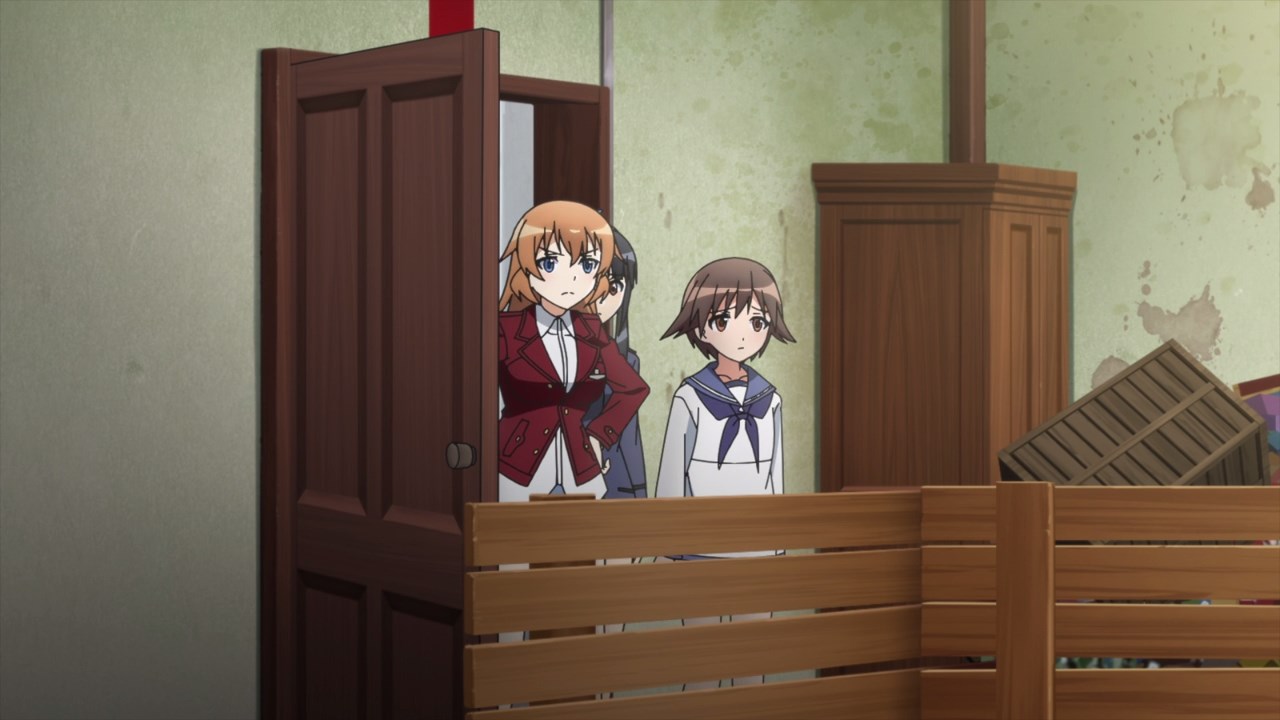 Back at the base, everyone is worried about Gertrud Barkhorn as she hasn’t got a proper meal ever since she lost her teammate.

So, Charlotte E. Yeager and the rest went to Barkhorn’s room and well, something happened to her. 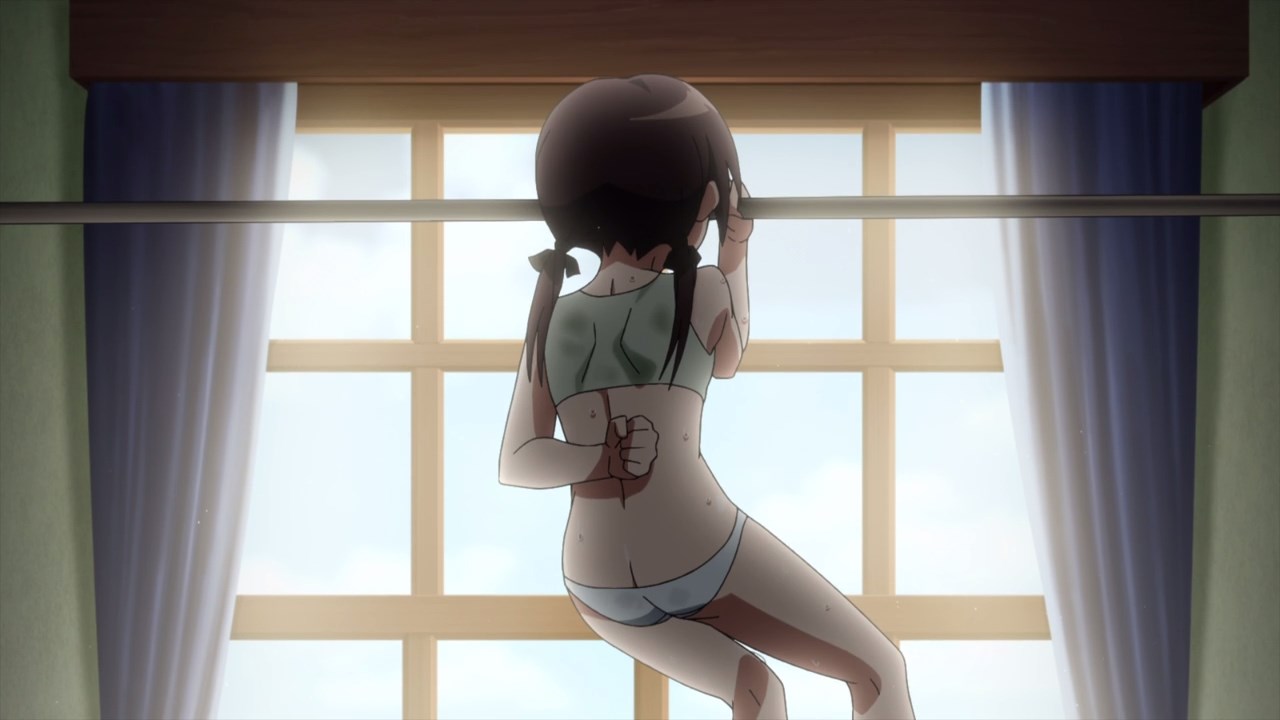 Turns out, Gertrud is constantly exercising all day in hopes on getting a slight edge over the Jet Neuroi.

Still, she needs to eat something ’cause Barkhorn might collapse due to hunger. Oh, and she needs a faster Striker Unit. 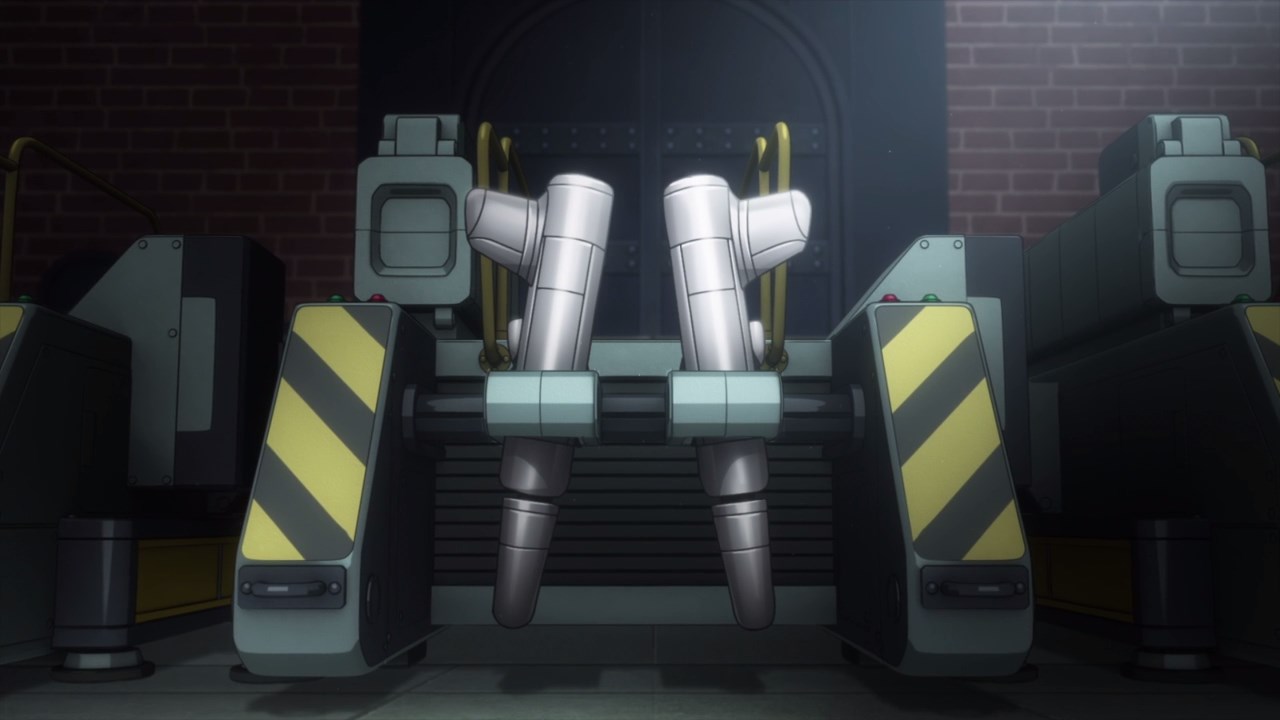 Not to worry though as Shirley tuned her Striker Unit in order to be quick and nimble against the Neuroi. From tuning the engine to making the surface as smooth as possible. 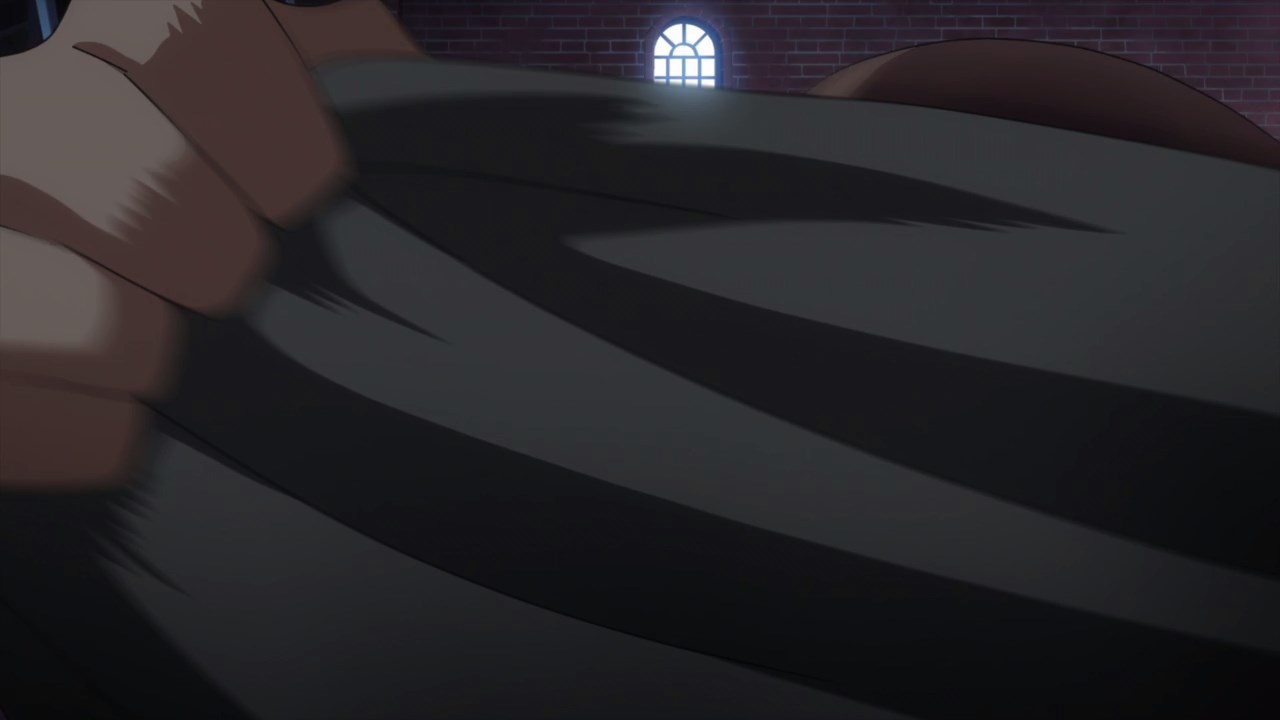 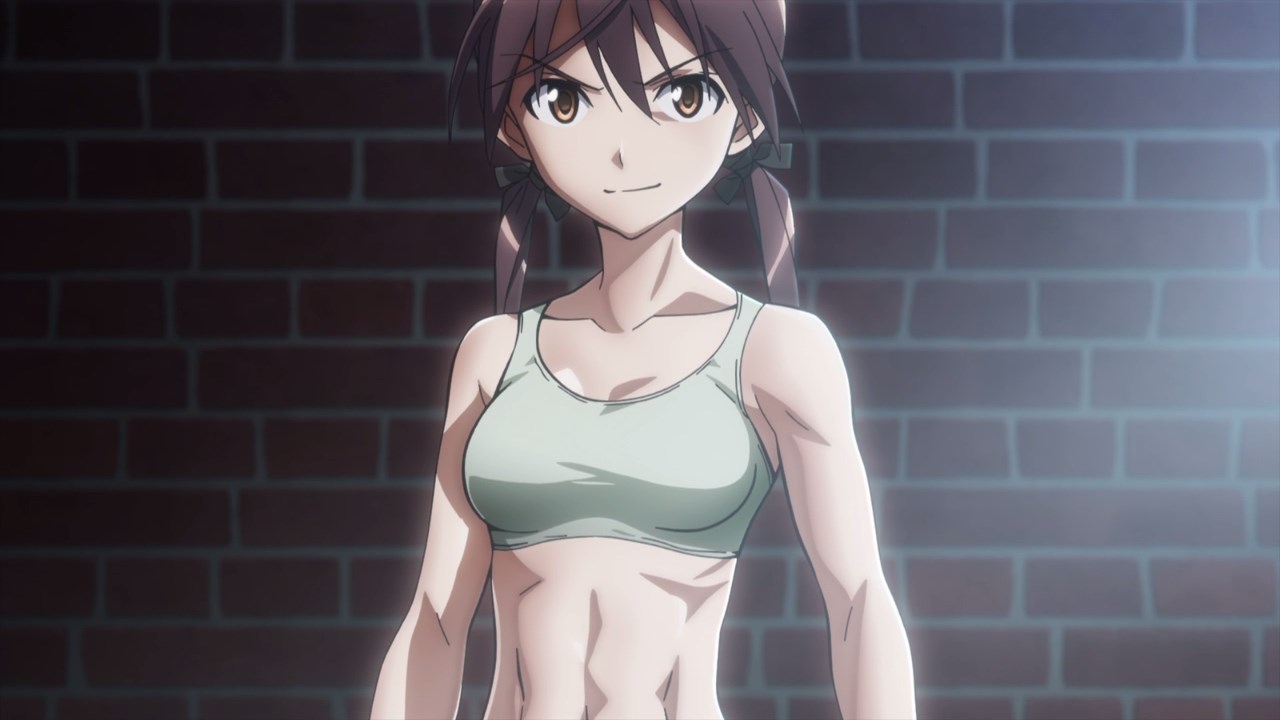 Oh yeah and speaking of Barkhorn, looks like her body got ripped after days of exercise and going to the sauna to shed some fat.

Looks like she’s ready to fight that Jet Neuroi but wait, there’s more… 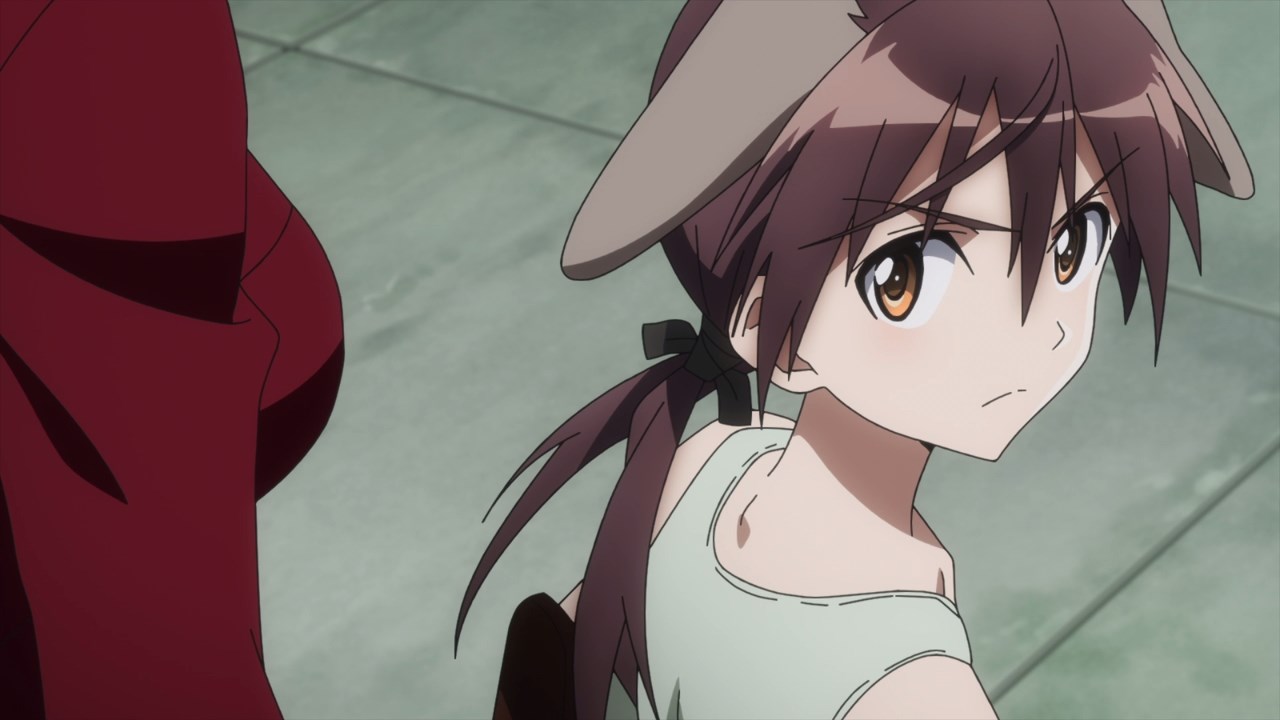 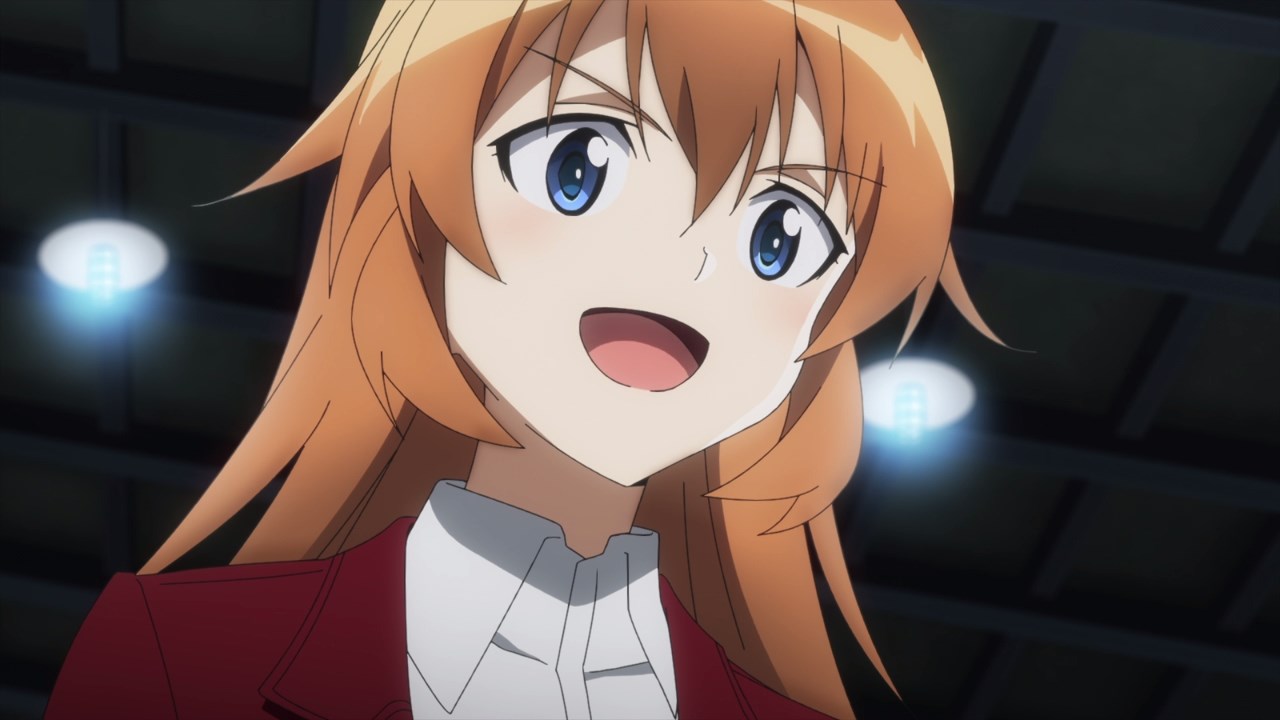 You see, Charlotte E. Yeager gave something special to Gertrud Barkhorn just in case if things went dire. I hope that Shirley’s gift would be useful. 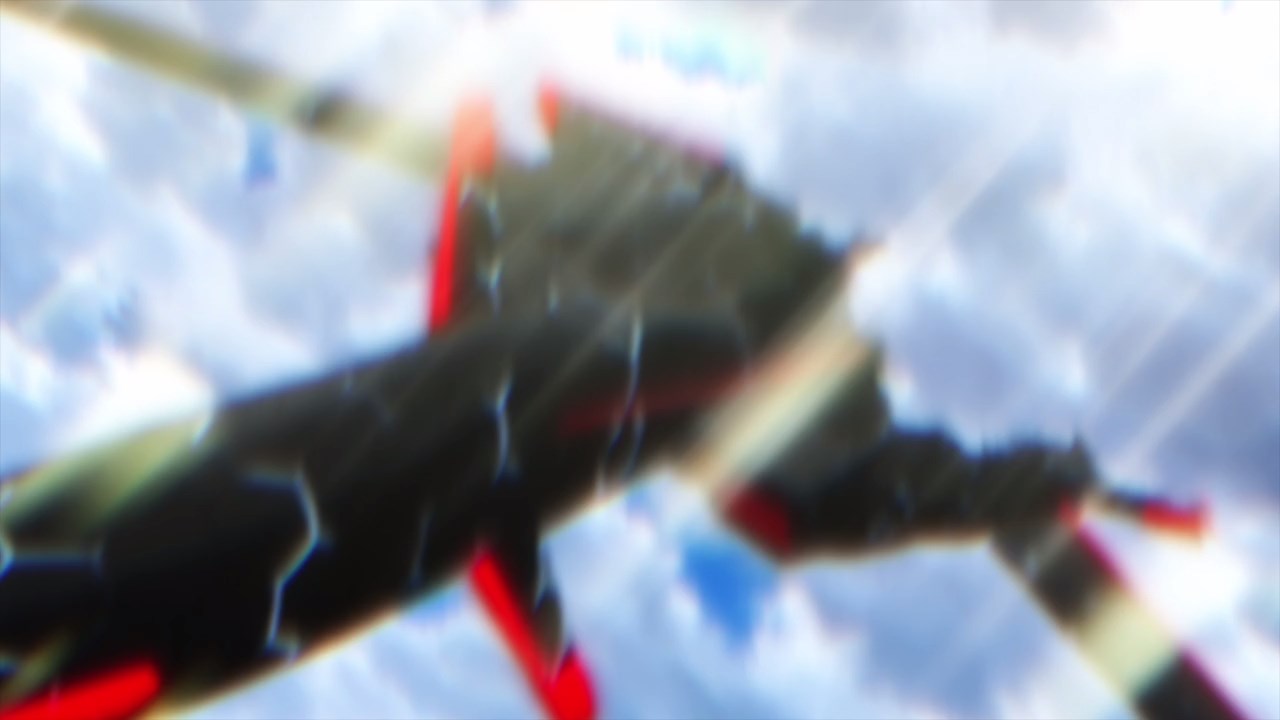 Now then, here’s Round 2 as Gertrud Barkhorn will face her nemesis, the Jet Neuroi. Let’s see if she can keep up with this Neuroi’s speed. 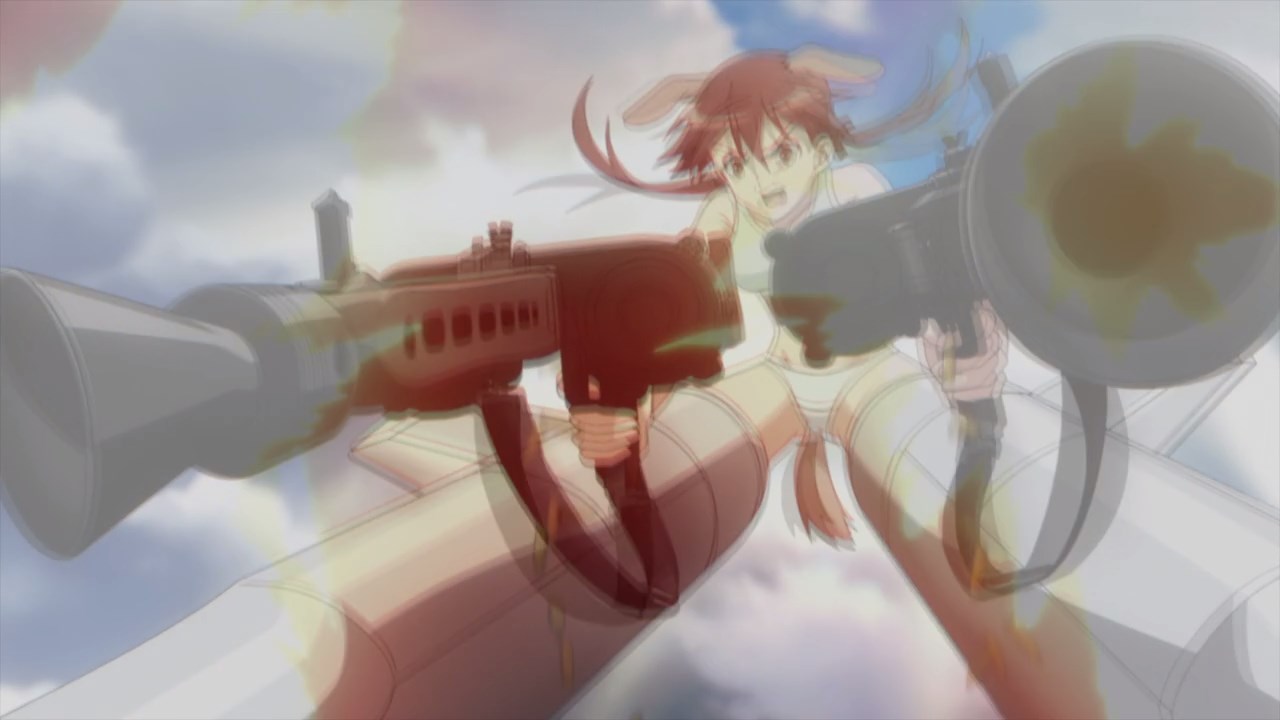 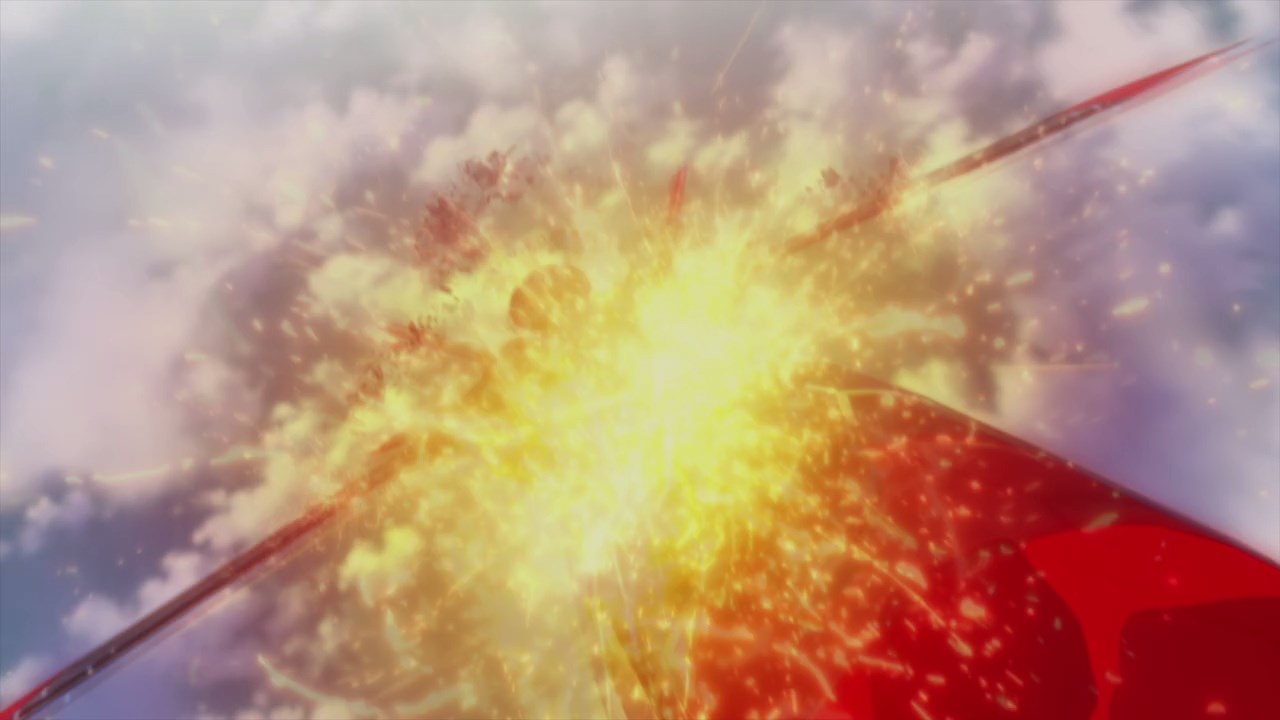 Well, Barkhorn can put up a fight against the Jet Neuroi as she whips up her two MG42 machineguns and shoots it until the enemy is destroyed. 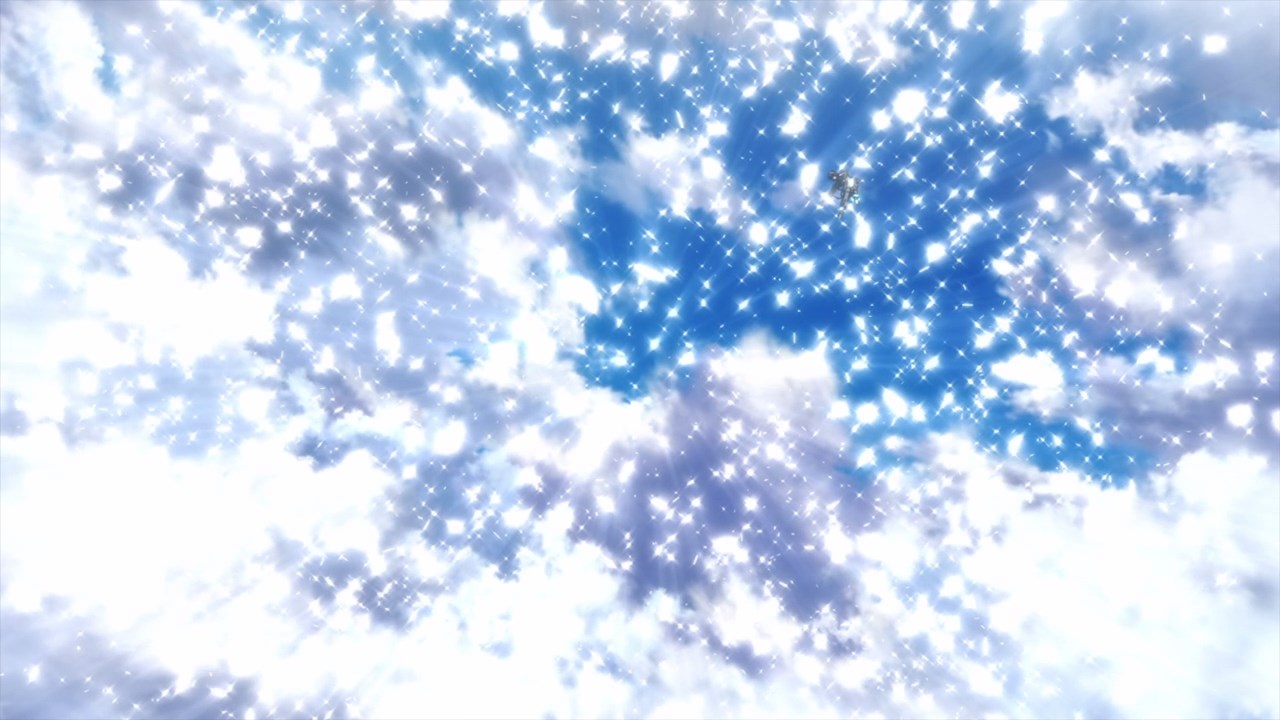 And as you can see, the Jet Neuroi is completely destroyed. Now then, it’s time for Gertrud to find her teammate. 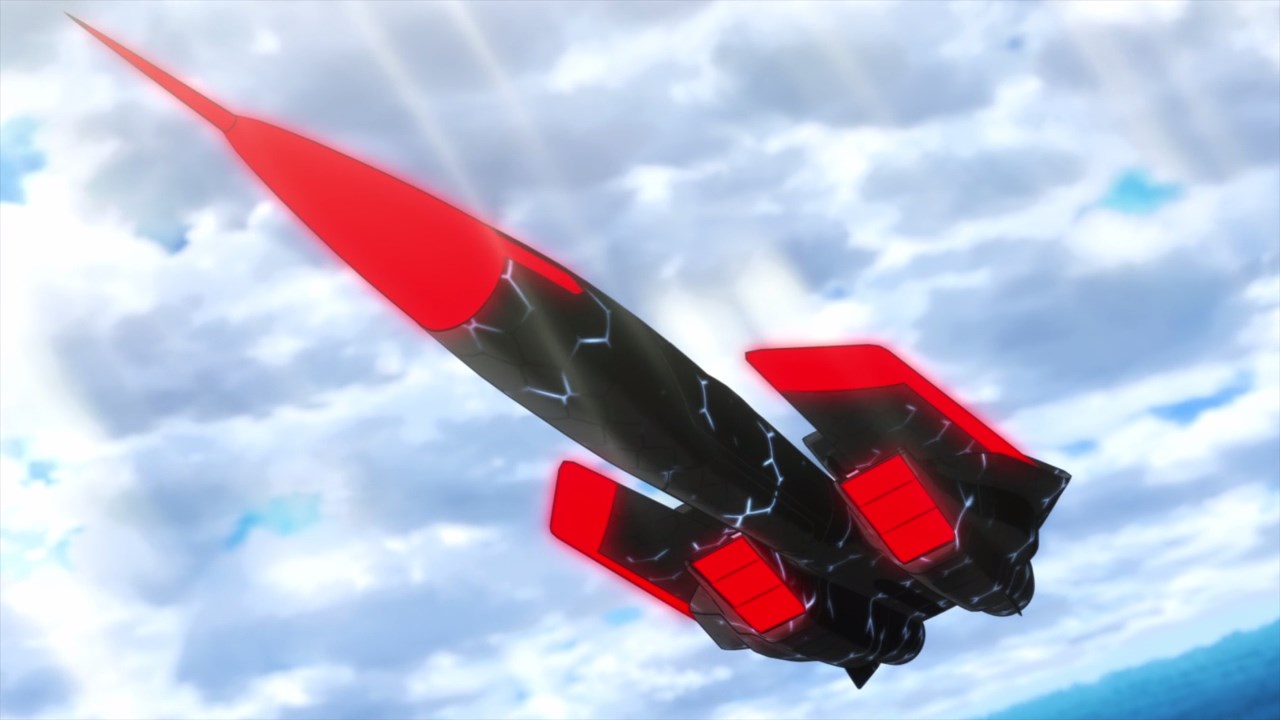 However, another Jet Neuroi appeared where it purged its tanks and changed its wings, turning into Pursuit Mode as the enemy goes straight towards Barkhorn. 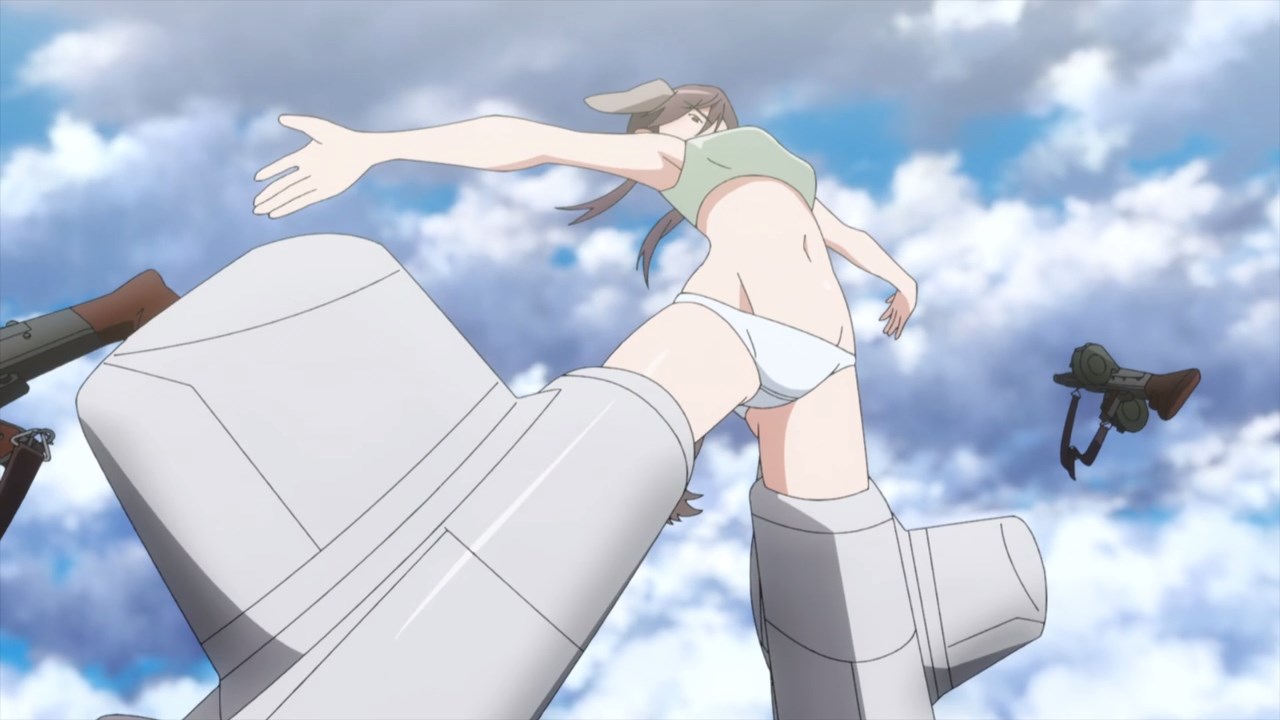 Not on her watch however as she’s gonna use her fists to stop another Jet Neuroi. Oh I bet that her fists will get hurt pretty badly after this battle. 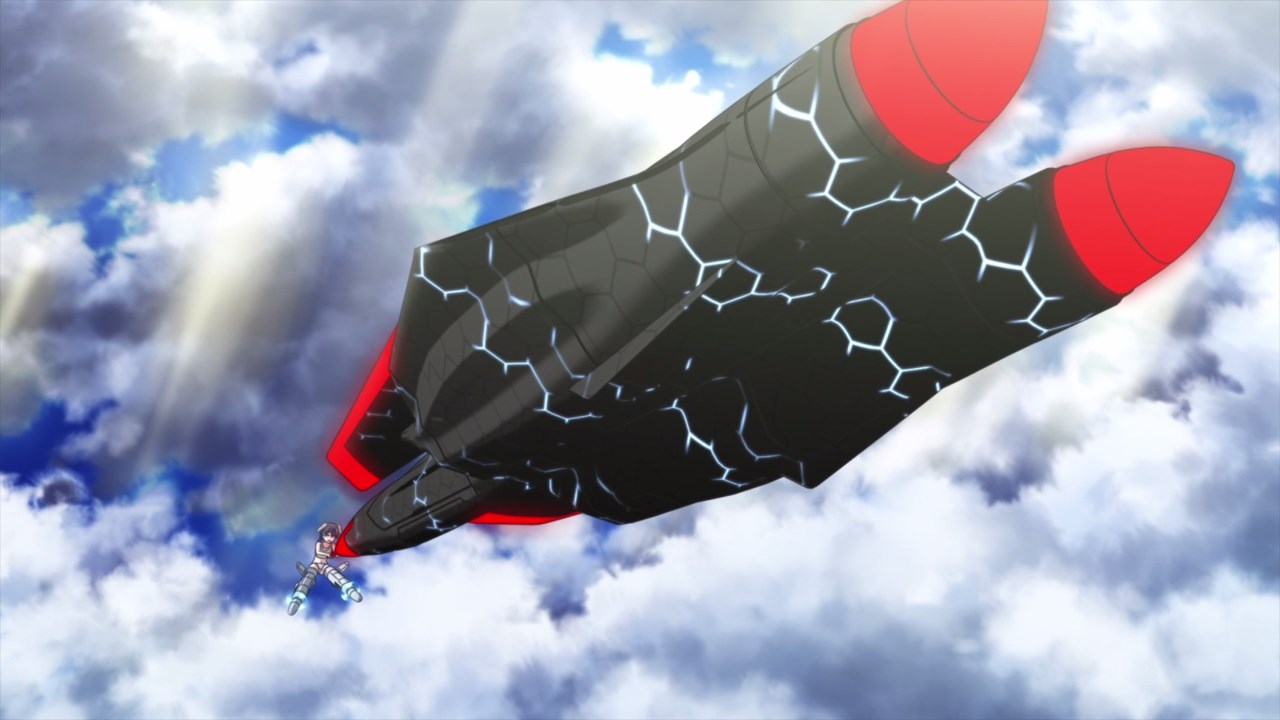 Anyways, looks like Barkhorn is gonna wrestle this Jet Neuroi, although I have a feeling that she’ll ran out of steam because Gertrud didn’t eat a lot. 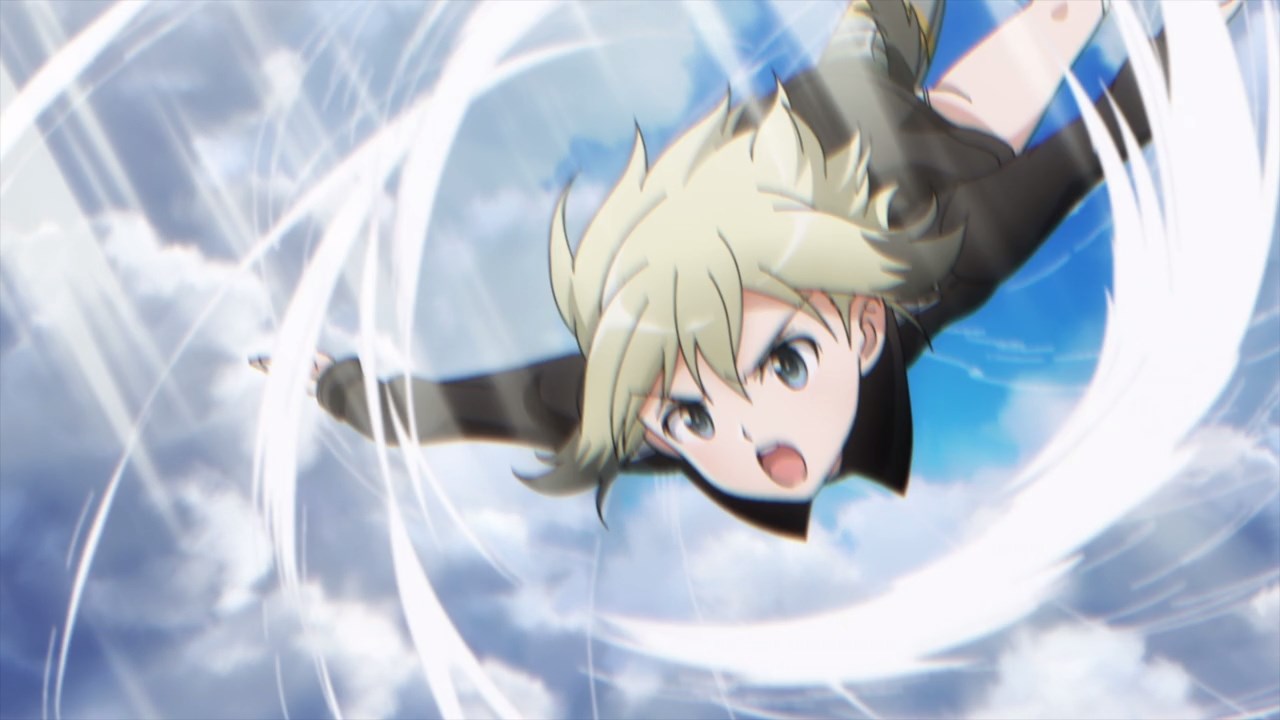 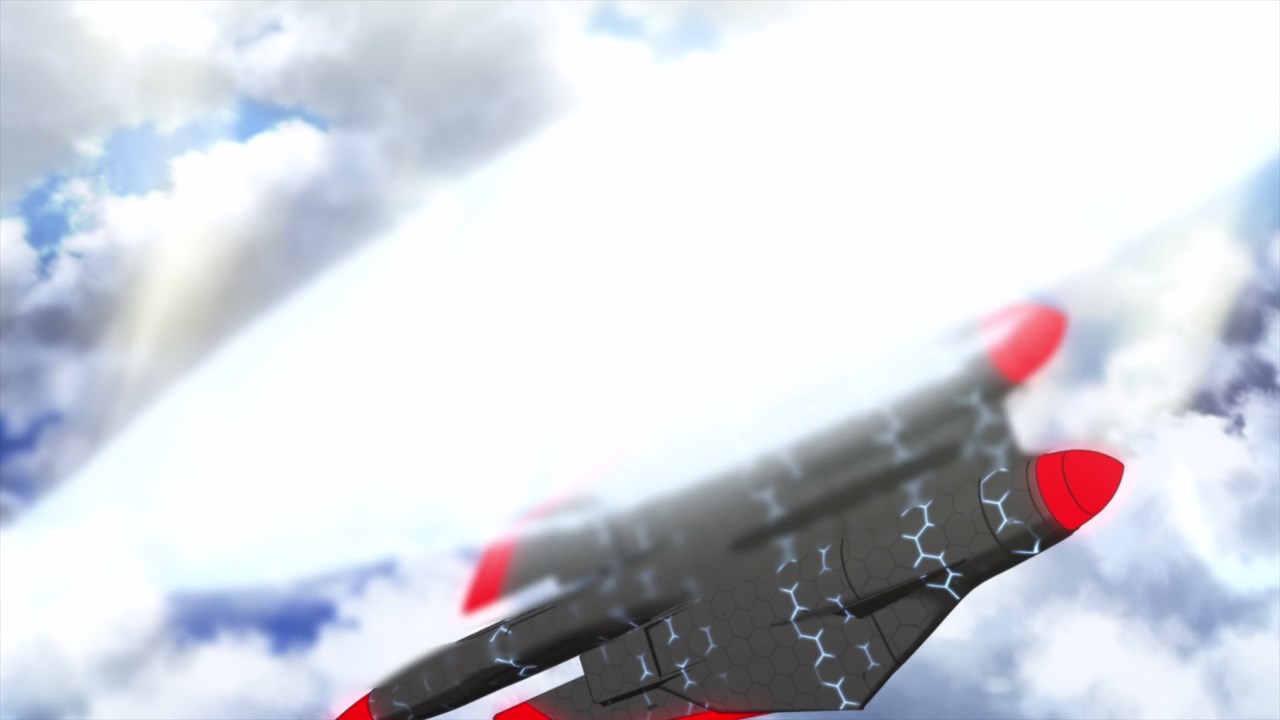 That’s until Erica Hartmann appeared where she finally fixed one Striker Unit as she uses Strum to spin the Jet Neuroi until its core is exposed. 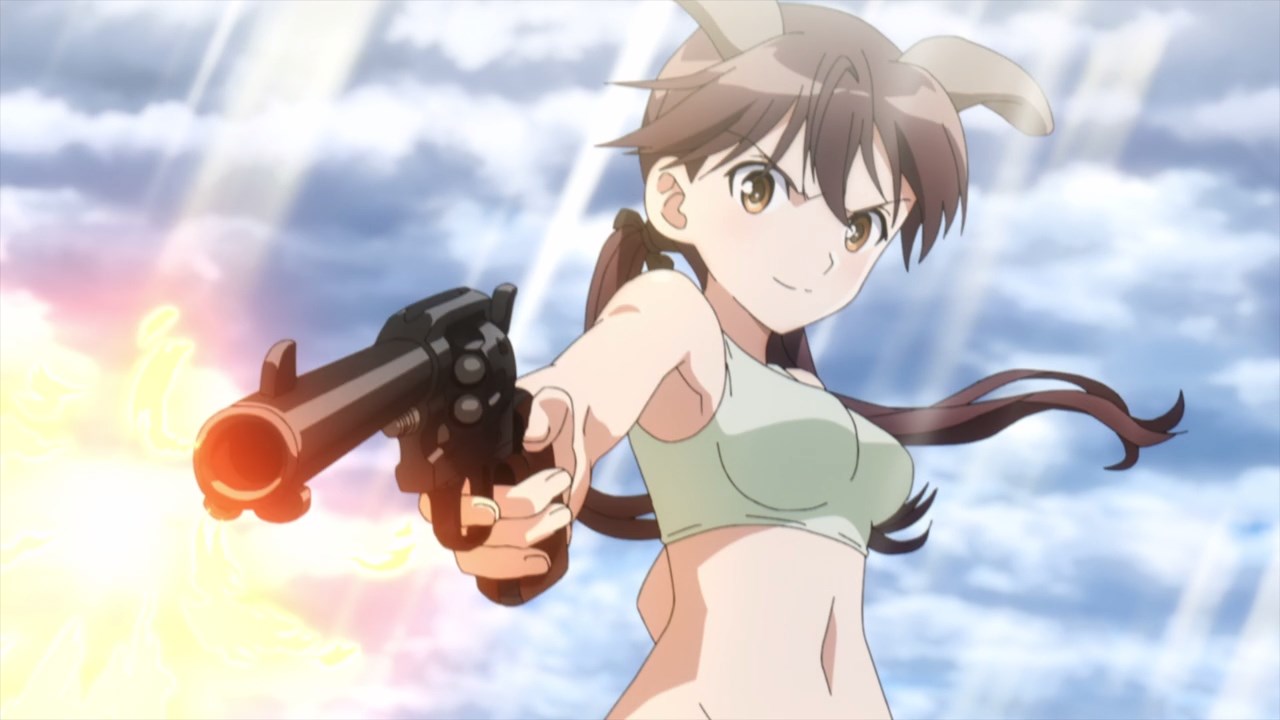 And after Hartmann making the Neuroi dazed and confused, it’s time for the coup de grâce as Barkhorn took out a revolver and shoot it down. 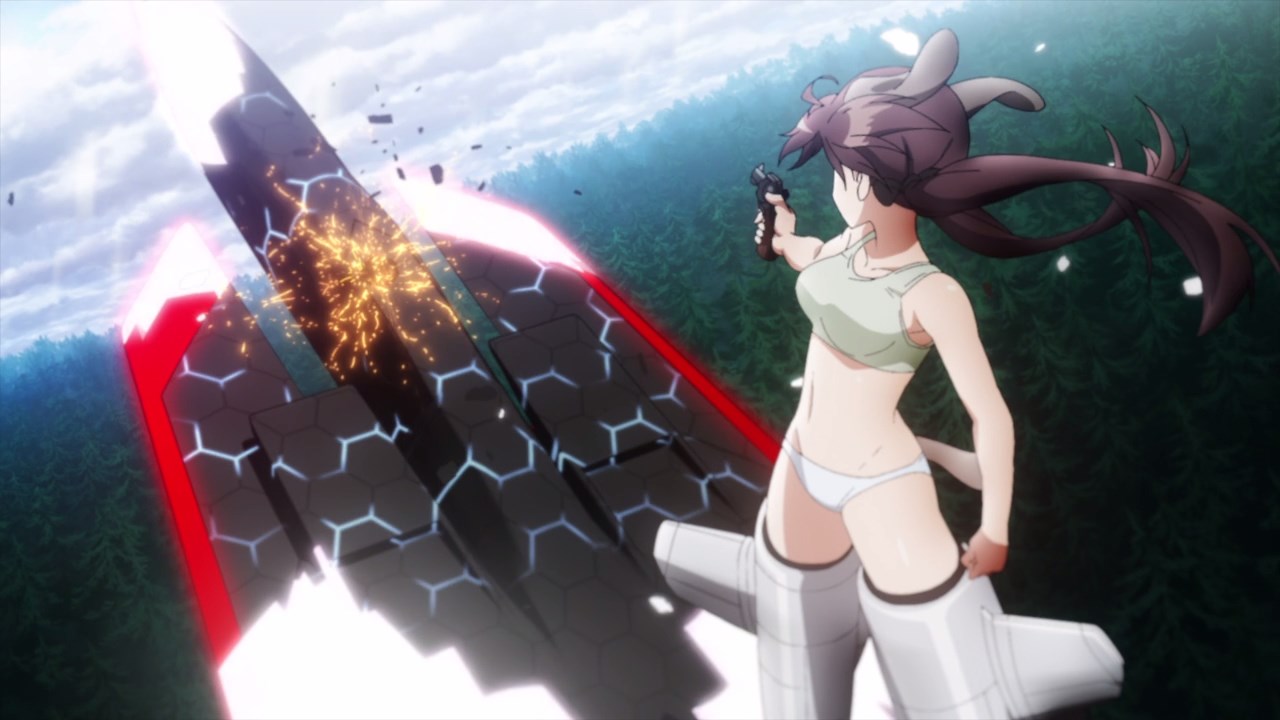 Oh yeah, that revolver belonged to Charlotte E. Yeager and I have to say that it’s very handy to have a backup weapon should her machineguns ran out of ammo. 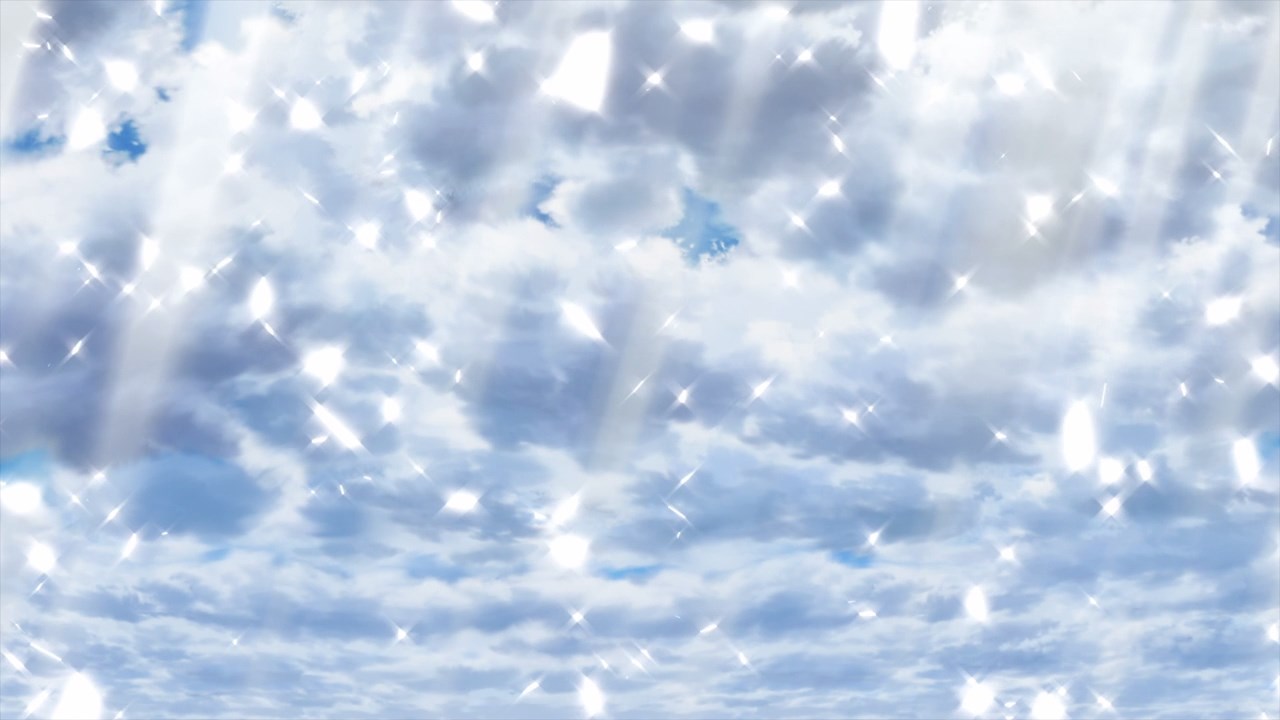 But anyways, looks like Barkhorn and Hartmann took care of that 2nd Jet Neuroi. Now then, it’s time to go home as Gertrud’s teammate has been rescued. 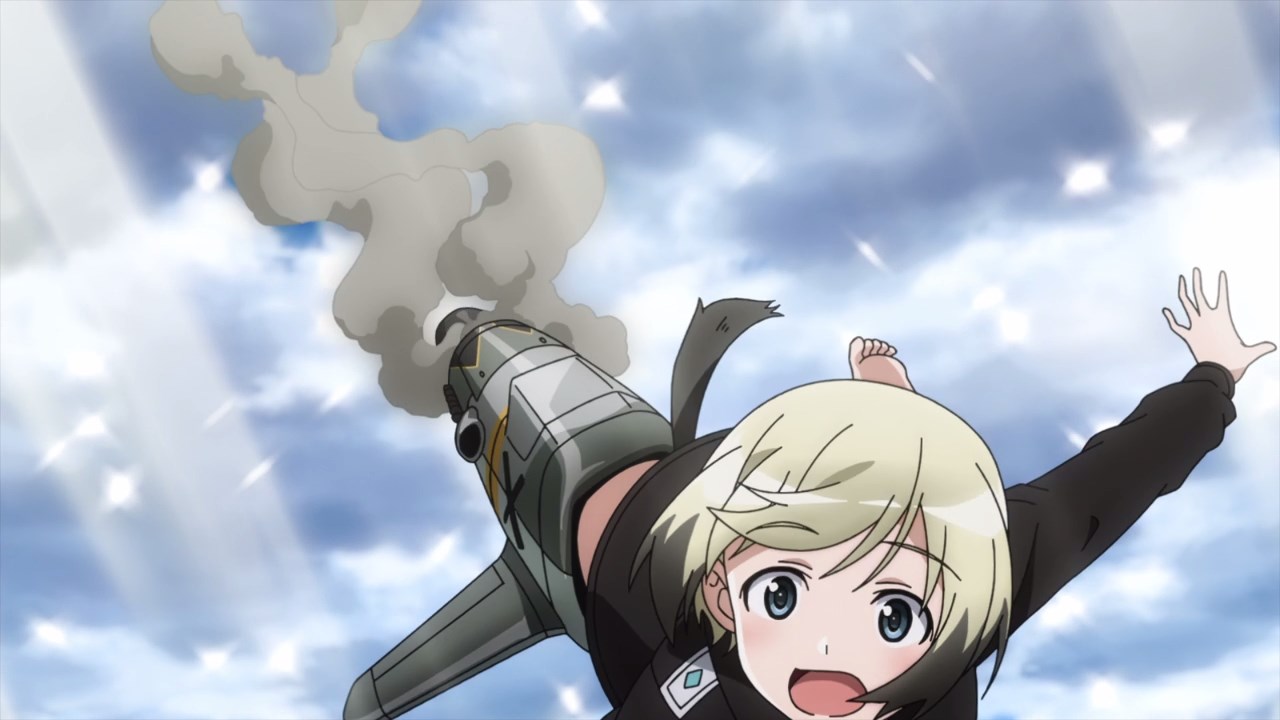 Except that Erica’s Striker Unit broke down and she’s gonna crash to the forest again. Man, if only someone would save her fro- 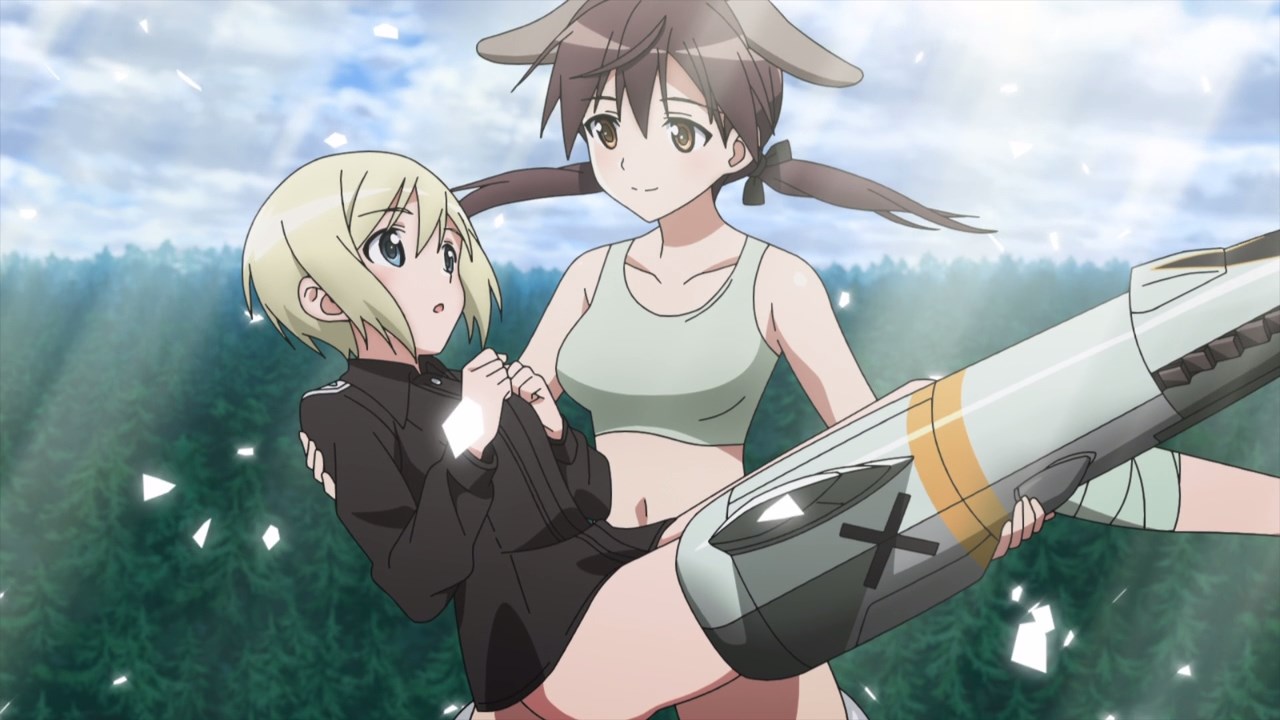 Oh, we have Gertrud Barkhorn where she rescued Hartmann from falling down. I like how she really cares for Erica despite being Ms. Sergeant Nasty most of the time.

Well then, that’s the end of this episode and while they took out two powerful Neurois, the Kiel military port is still infested by the enemy so it’s gonna take a long time for the 501st Joint Fighter Wing to capture it. Anyways, see ya next time!