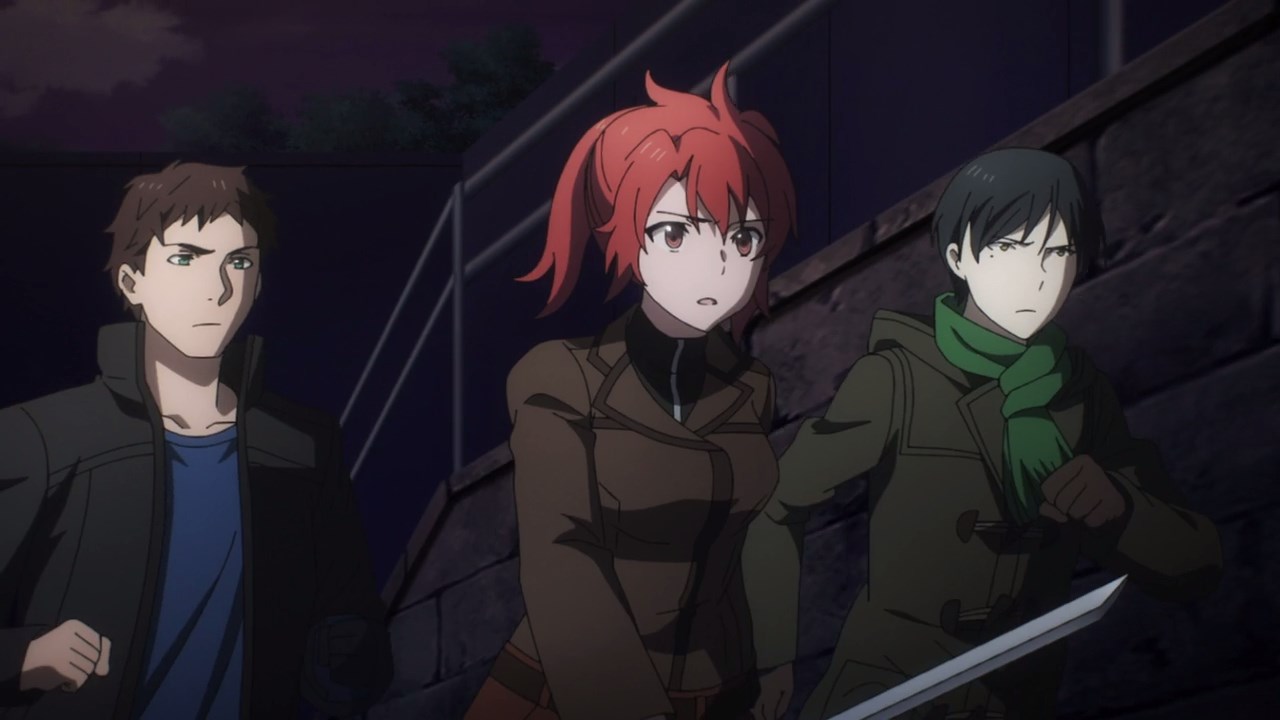 Looks like the cavalry has arrived as Leonhart Saijou, Erika Chiba, and Mikihiko Yoshida are here to help Tatsuya Shiba out. 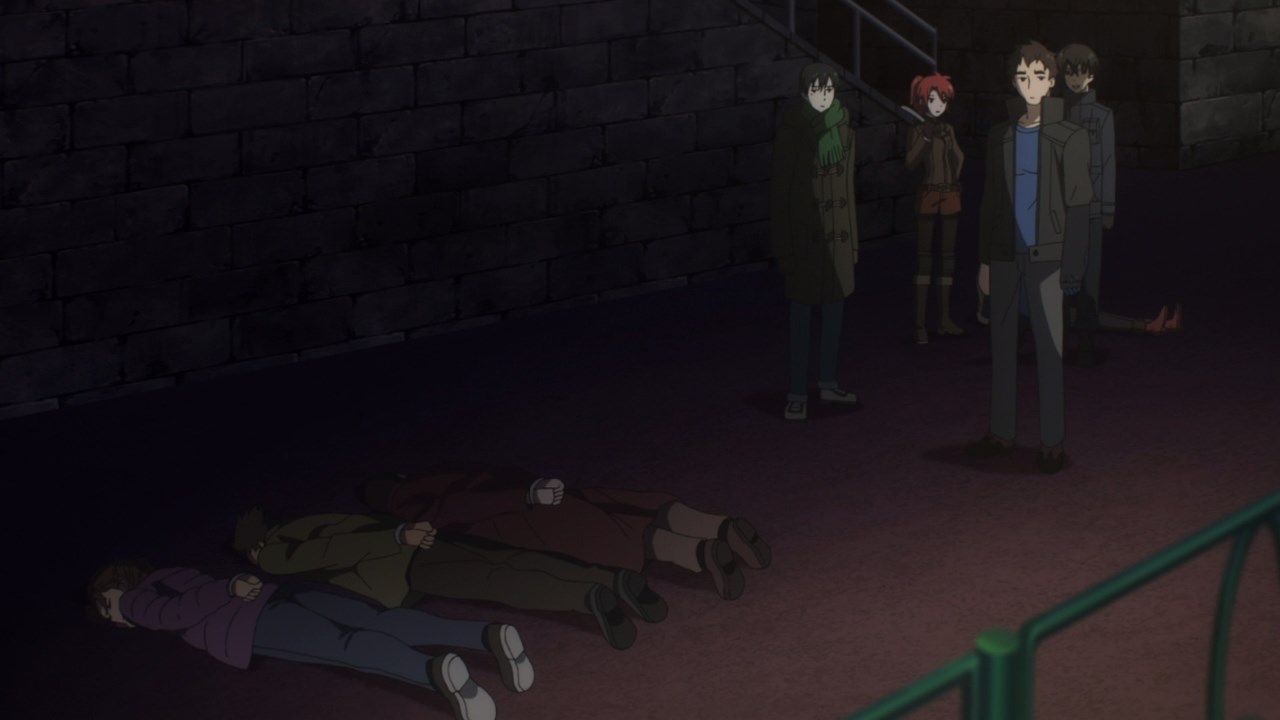 Except that Tatsuya told them to take the parasites to the police. It would be bad if someone captures Marte and the rest for conducting experiments. 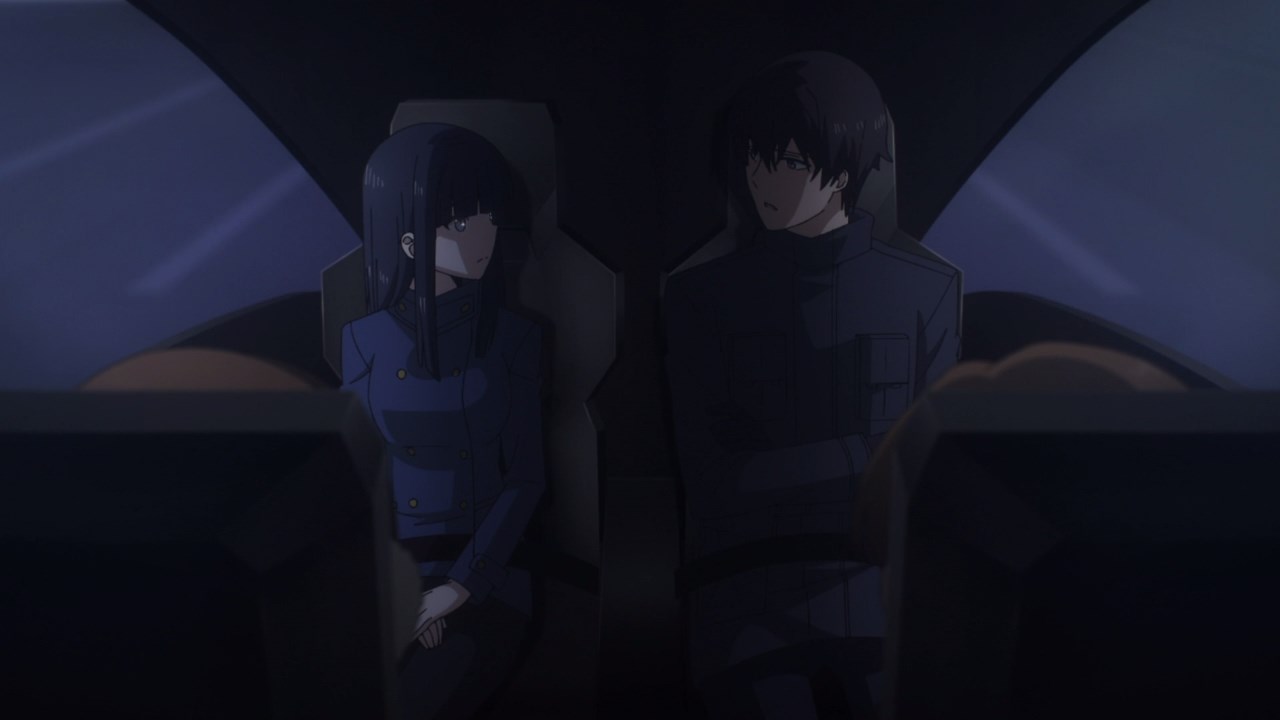 Meanwhile for Tatsuya Shiba, he took Honoka Mitsui and Pixie home as Tatsuya is worried that they might be targeted by shady people, especially when Honoka’s hair clips serves as a catalyst to transfer her magic to Pixie. 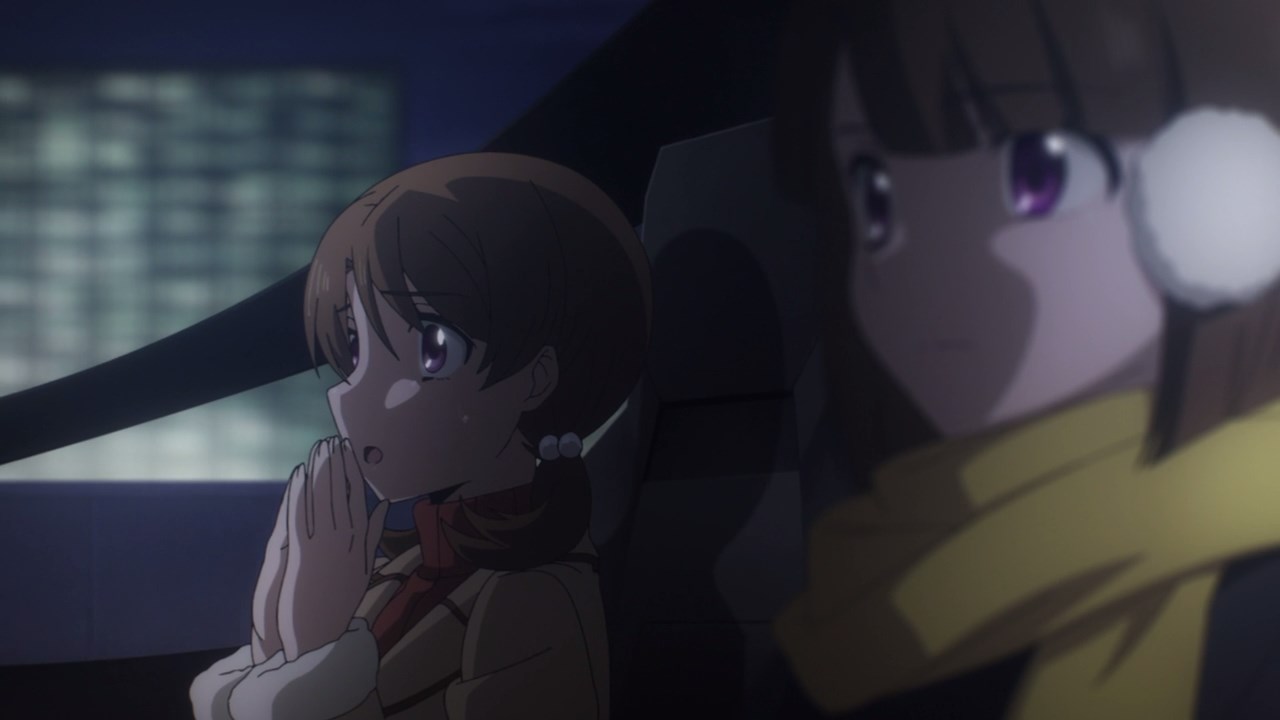 For Honoka Mitsui, she’s shock that her magic ability might get abused, especially when she’s accompanied by a maid robot who’s currently possessed by a parasite and it’s being powered by Honoka’s feelings. I hope no one will capture her along with Pixie. 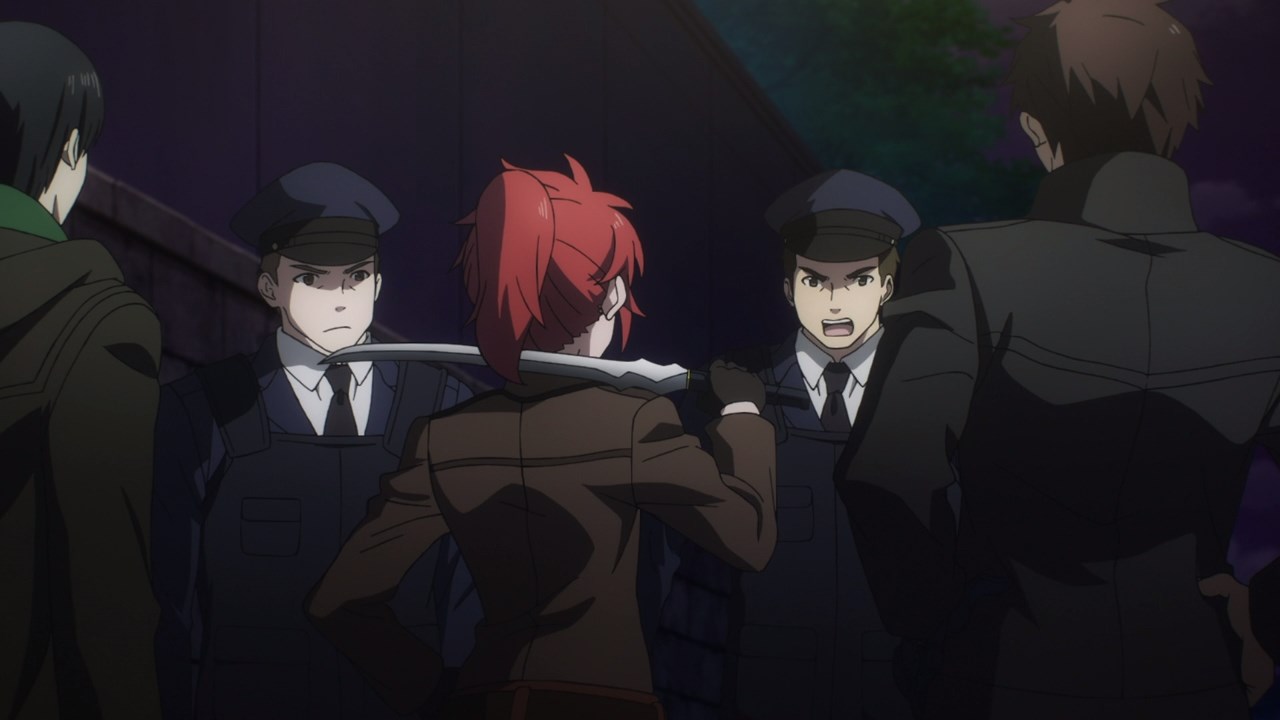 Let’s go back to Erika Chiba and her friends where they’re confronted by two police officers, telling them to hand over the criminals. 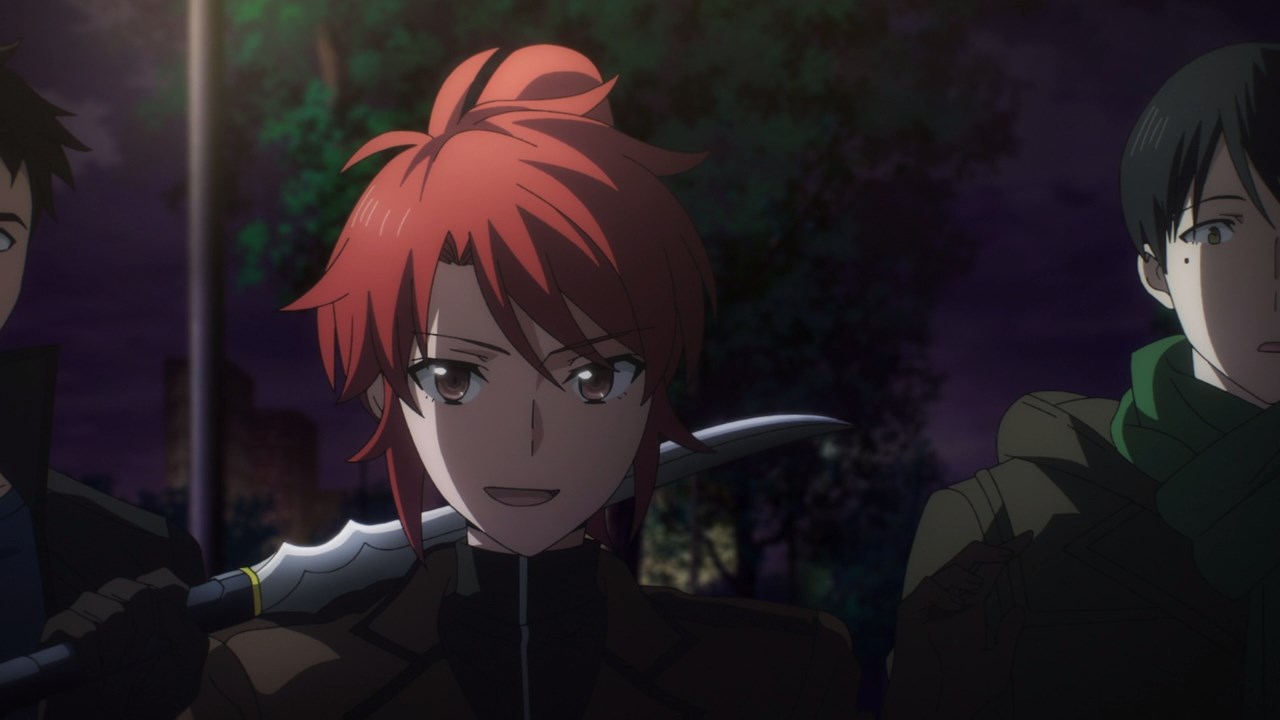 However, Erika doubted that they’re actually police officers since no one is stationed near Aoyama Cemetery.

Besides, her brother is part of the National Defense Force so Erika knows who’s actually in charge. 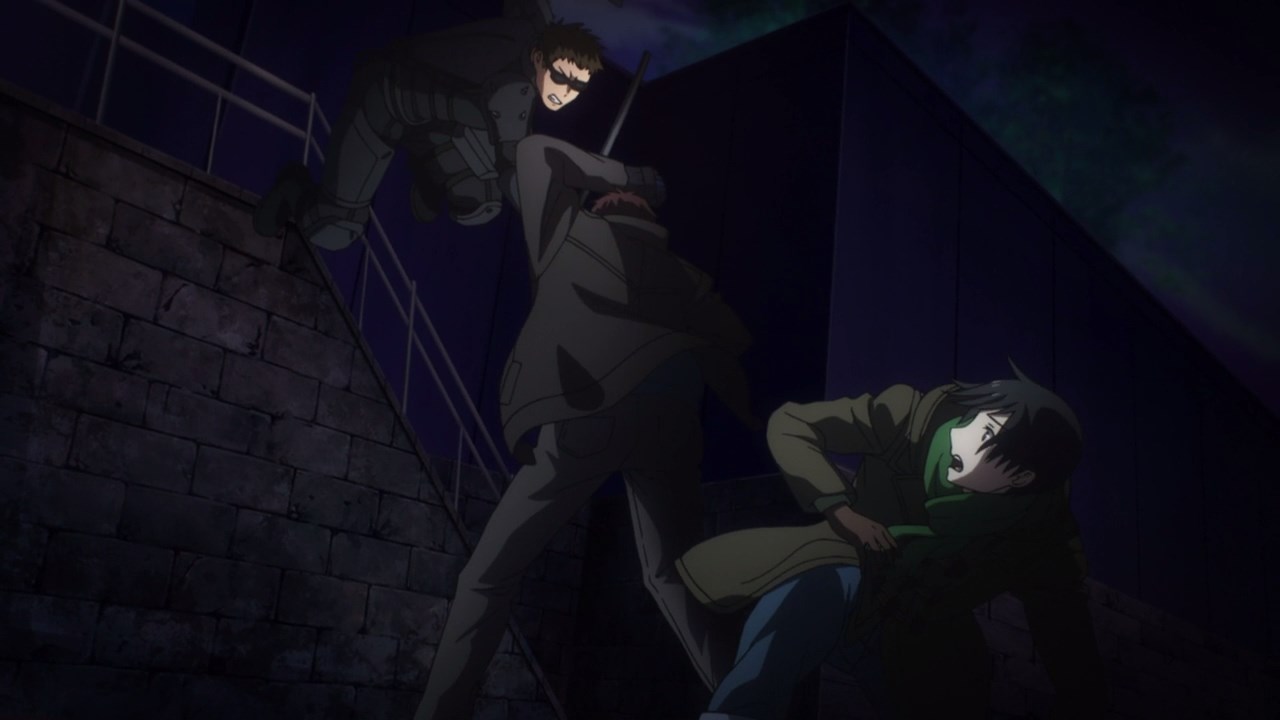 Of course, these phony policemen won’t give up as they revealed their true intentions by attacking Tatsuya’s friends.

Luckily, the likes of Leonhart Saijou and Mikihiko Yoshida can hold them off on their own, although Leonhart did most of the damage against these shady people. 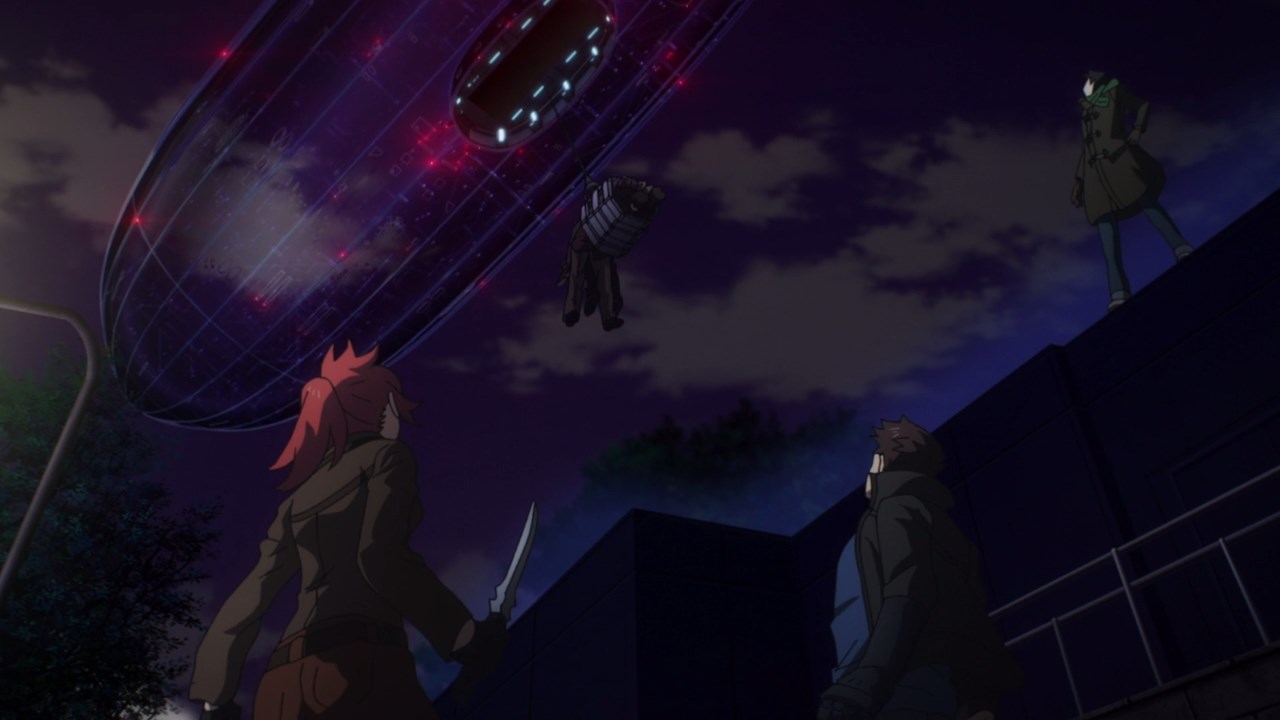 Sadly, the parasites are captured by this stealth blimp and man, Erika Chiba and the rest got played right under their noses. Man, what are they gonna tell to Tatsuya in regards to their blunder?

Fortunately, Tatsuya Shiba is not angry towards his friends as he learned that Counterintelligence Section Three is responsible for capturing the parasites, which the organization might use them for military purposes. Man, they’re no different than the Americans. 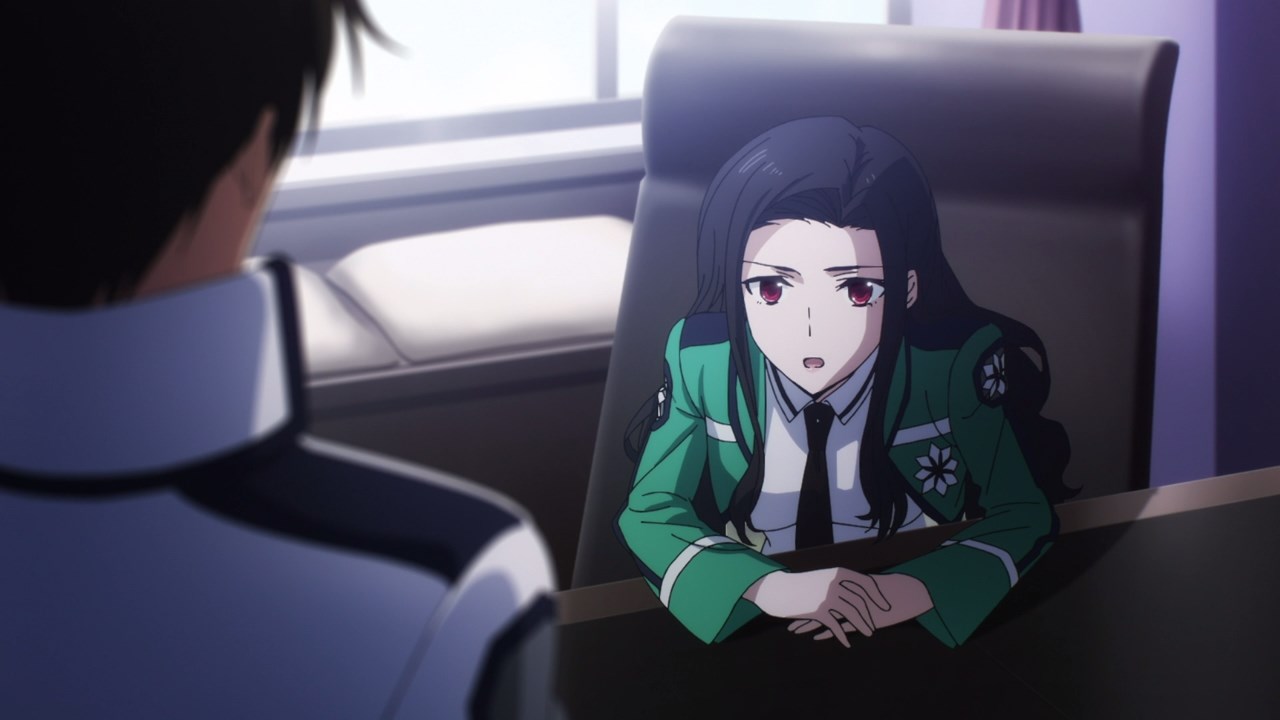 But let’s talk about Counterintelligence Section Three where it turns out that the Saegusa family are the main sponsor of that organization.

So, Tatsuya Shiba asked Mayumi Saegusa to give those parasites back to Erika Chiba and the rest of his friends, although Mayumi-sempai has no idea that Counterintelligence Section Three would do such a thing.

Still, Mayumi Saegusa will try to convince her father to give the parasites back to Tatsuya Shiba’s friends. C’mon, that information bureau is not trustworthy when it comes to handling parasites. 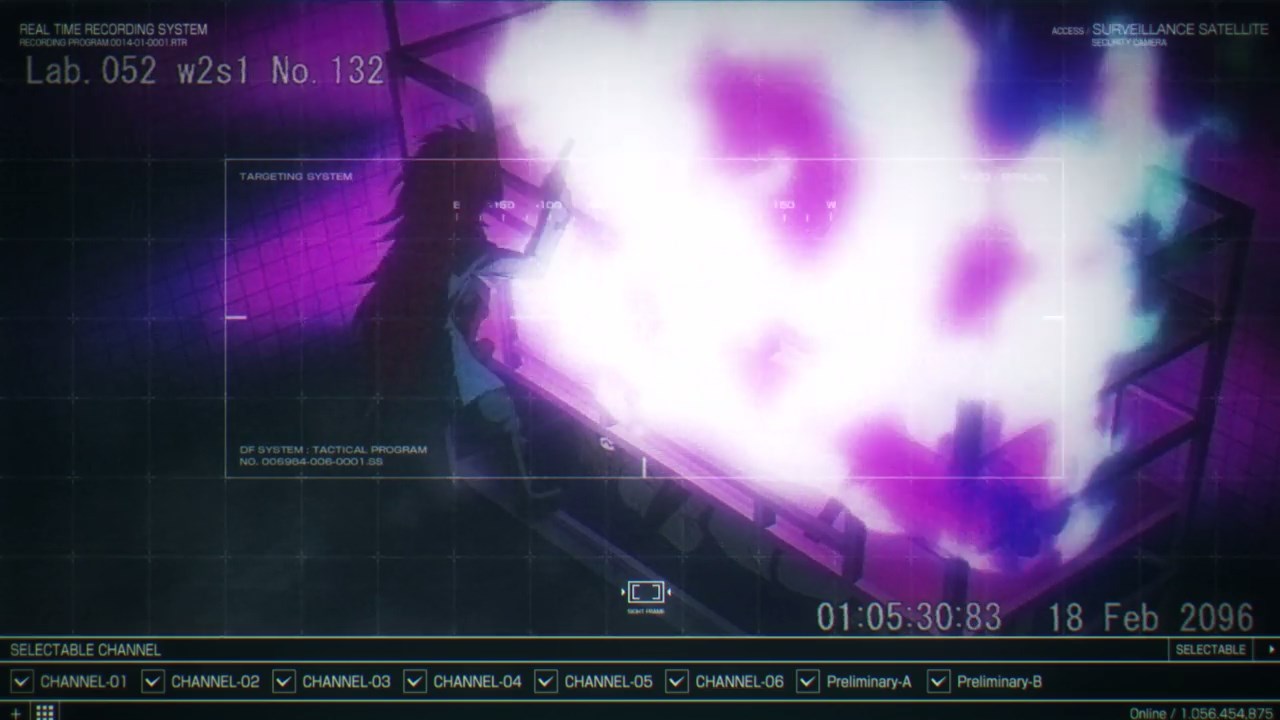 However, there’s a spanner in the works as Angelina Kudou Shields attacked the bureau and burn the parasites in attempt to hide the evidence. Something tells me that Colonel Virginia Balance ordered Lina to commit murder. 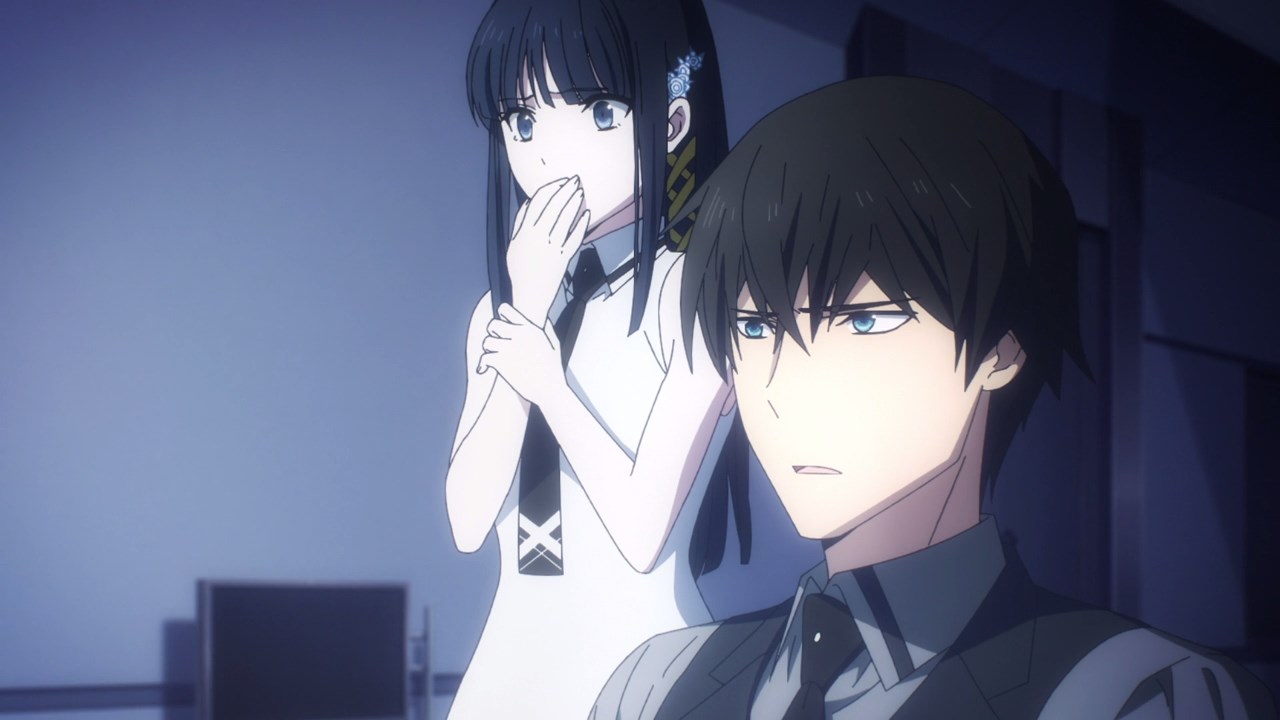 For Miyuki and Tatsuya Shiba, it was a horrible sight to behold. Of course, Tatsuya thinks that Lina (or Angie Sirius) can’t take the heavy burden of being forced to carry out this heinous crime. 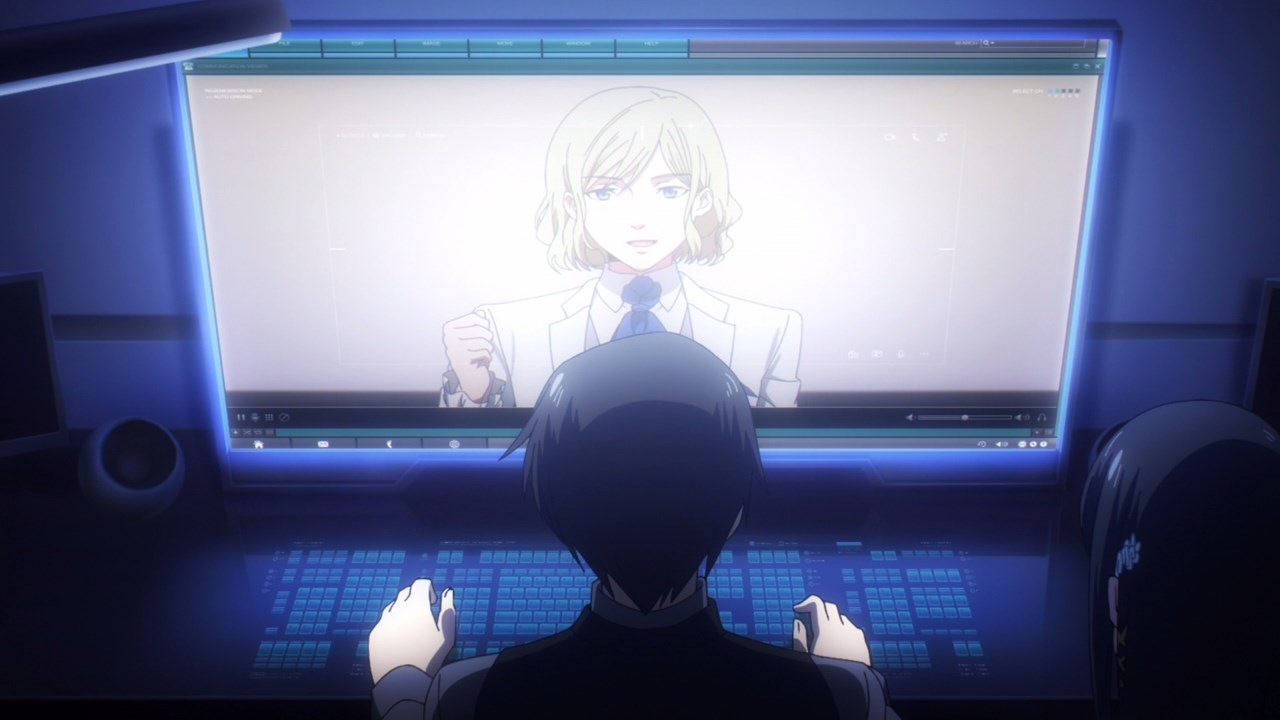 One last thing, remember Ray? Well, this character has returned as he calls himself as Raymond Sage Clark where Tia’s (or Shizuku’s) dance partner is actually part of the Seven Sages.

Of course, Raymond is not here to mess up Japan as he wants Tatsuya Shiba to dispose the parasites as soon as possible, and warned him about another sage that’s manipulating public opinion behind the scenes. 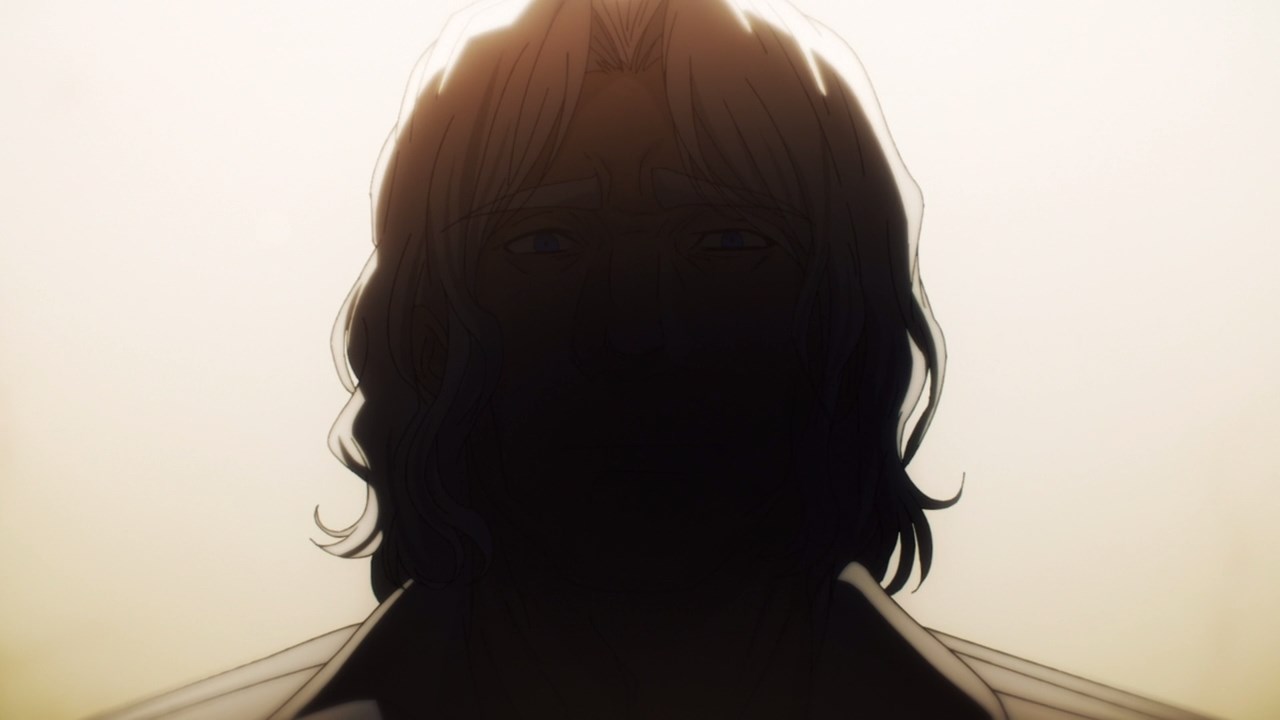 This is Jiedo Sage Heigu or should I say Gu Jie where he’s actually the founder of Blanche, and serves as a boss to both Hajime Tsukasa and Zhou Gongjin. Then again, his face is currently obscured by this shadow.

And here’s the thing though as Ray told Tatsuya that Heigu is the one who let the parasites enter Japan and he’s currently manipulating the citizens so that they would antagonize the magicians. Ugh, looks like Tatsuya will have to confront this sage in the future.

Anyways, tune in next time as Tatsuya has no other choice but to eliminate all parasites. Of course, I wonder if he’ll spare Pixie since she has developed human emotions?