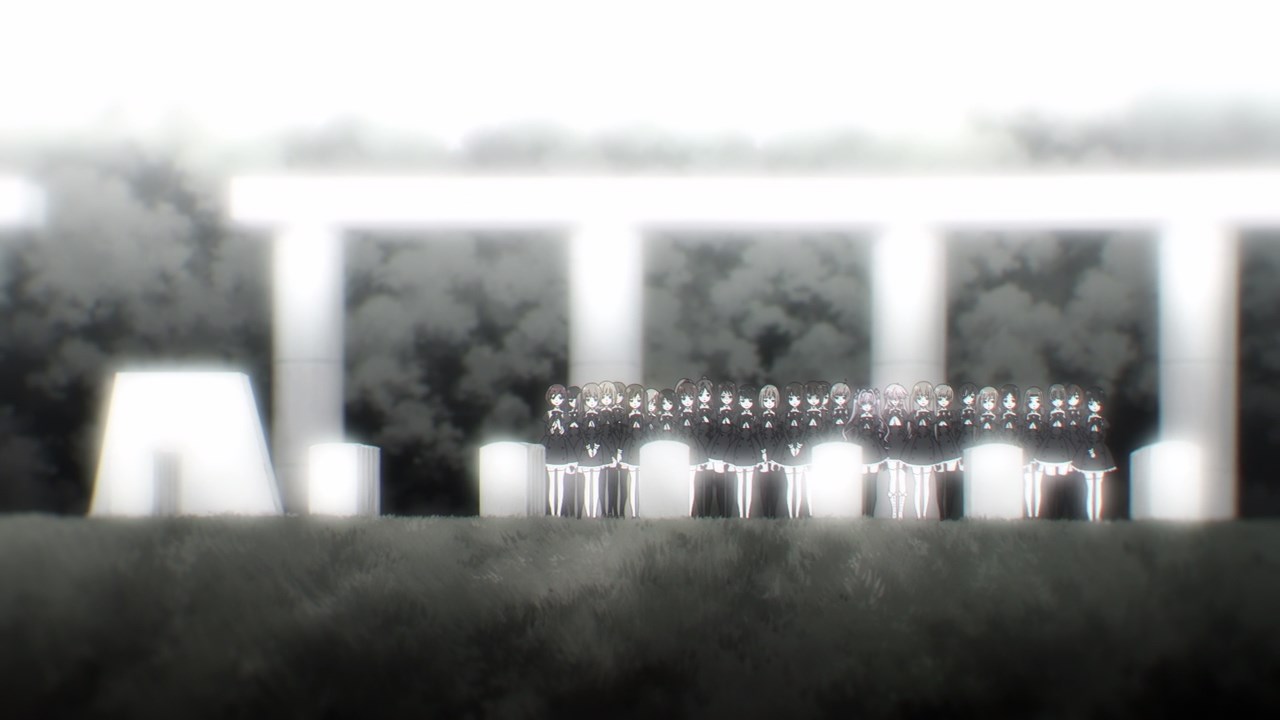 It was the saddest day for Yurigaoka Girls’ Academy where they witness the passing of their newest Lily, Yuri Hitotsuyanagi. And really, she’s barely a month old when Yuri thrusts into battle against a HUGE which resulted in her death.

On one hand, there’s Riri Hitotsuyanagi in which she was locked-up in a prison cell for defending a Lily that has HUGE DNA, even though Moyu Mashima refuted their claims that Yuri is a threat to humanity. 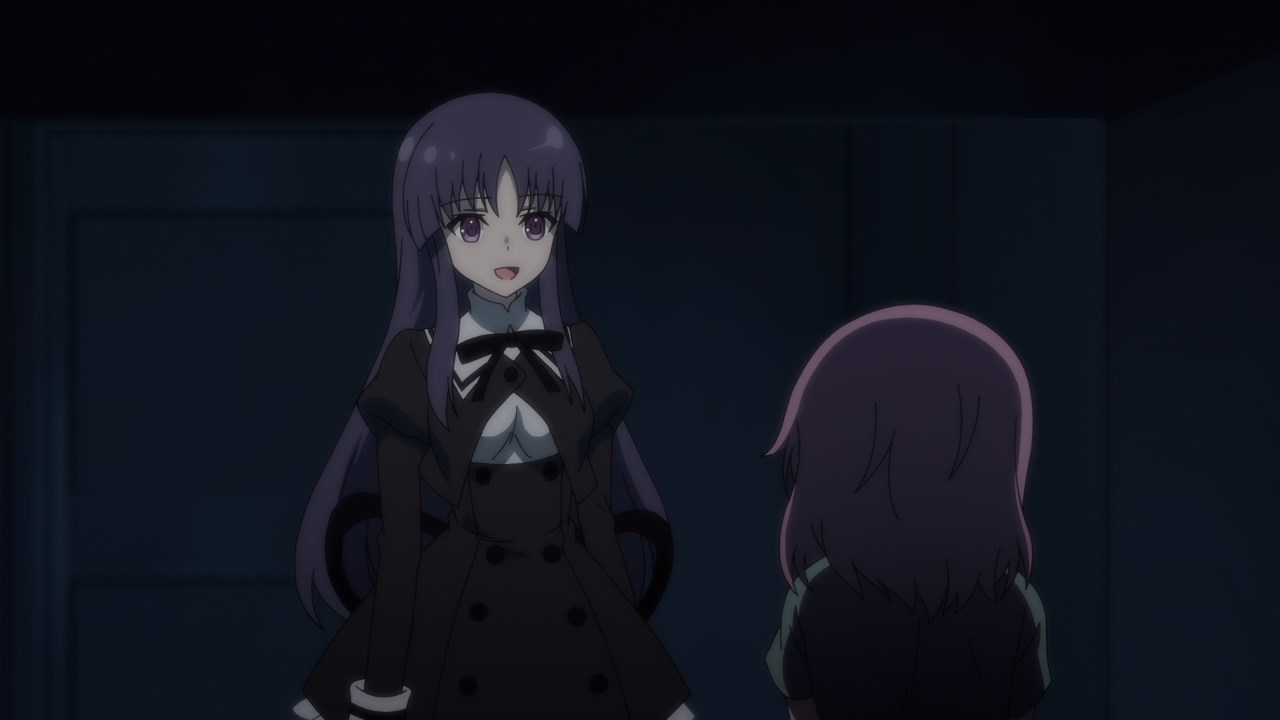 Anyways, here’s Yuyu Shirai where she checks on her Schild to see if she’s okay. By the way, Yuyu-sempai will only have 10 minutes a day to visit Riri until she’s free from her cell. 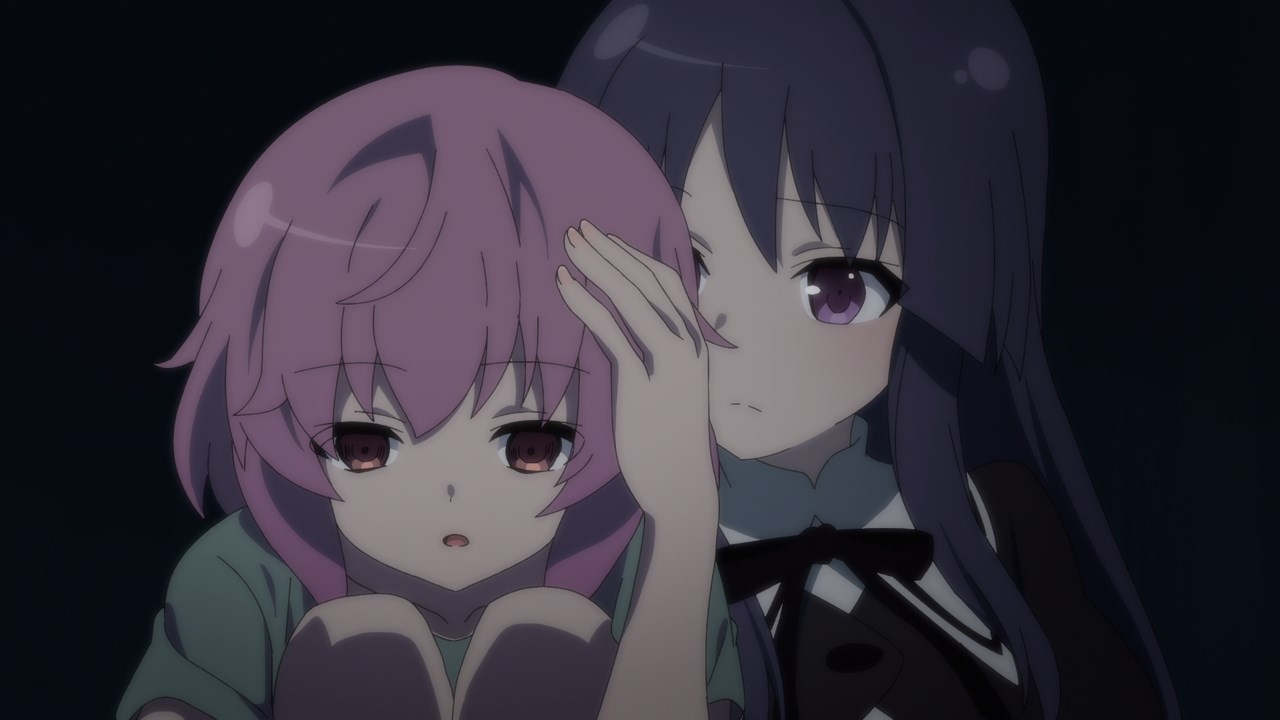 But speaking of Riri Hitotsuyanagi, she’s not looking great with her dull eyes upon seeing the death of Yuri. Man, I’m hoping that she can recover from this tragedy.

On the other hand, it appears that Riri lost her four-leaf clover hair tie during the battle against the HUGE from the previous episode, which is very important for her since Riri’s parents gave that accessory to her. Sounds like it’s time to find her hair tie. 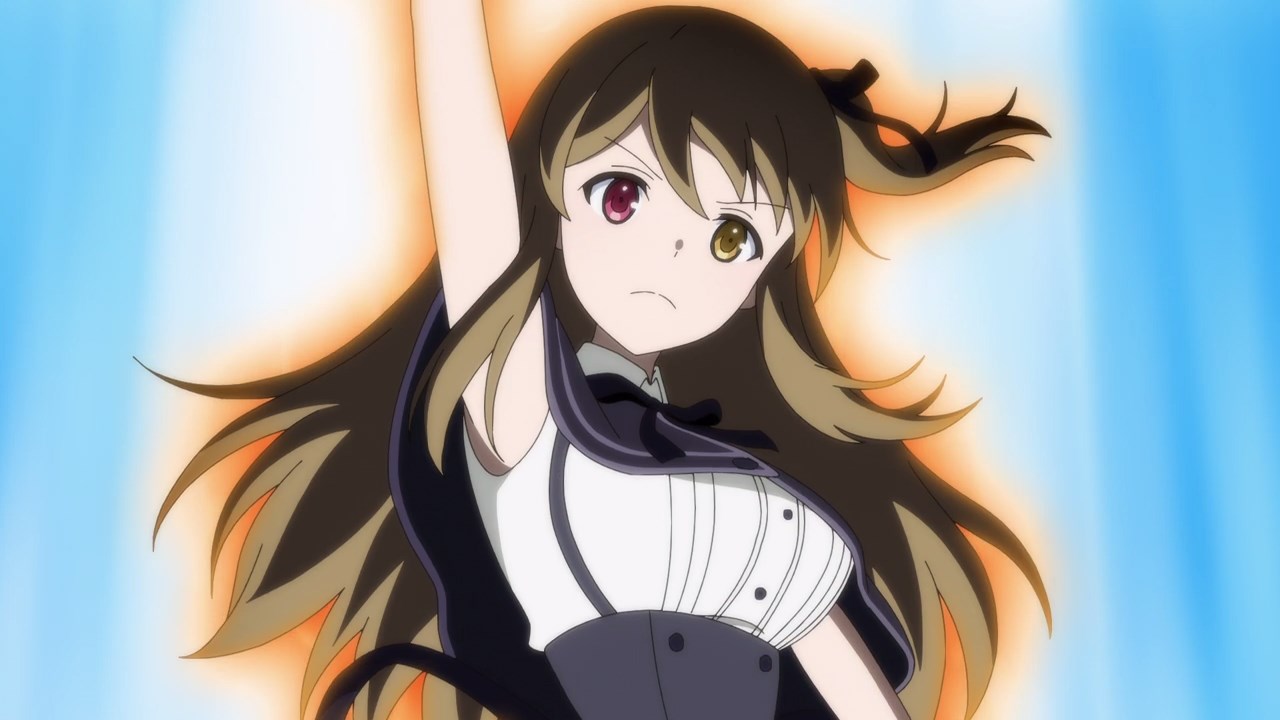 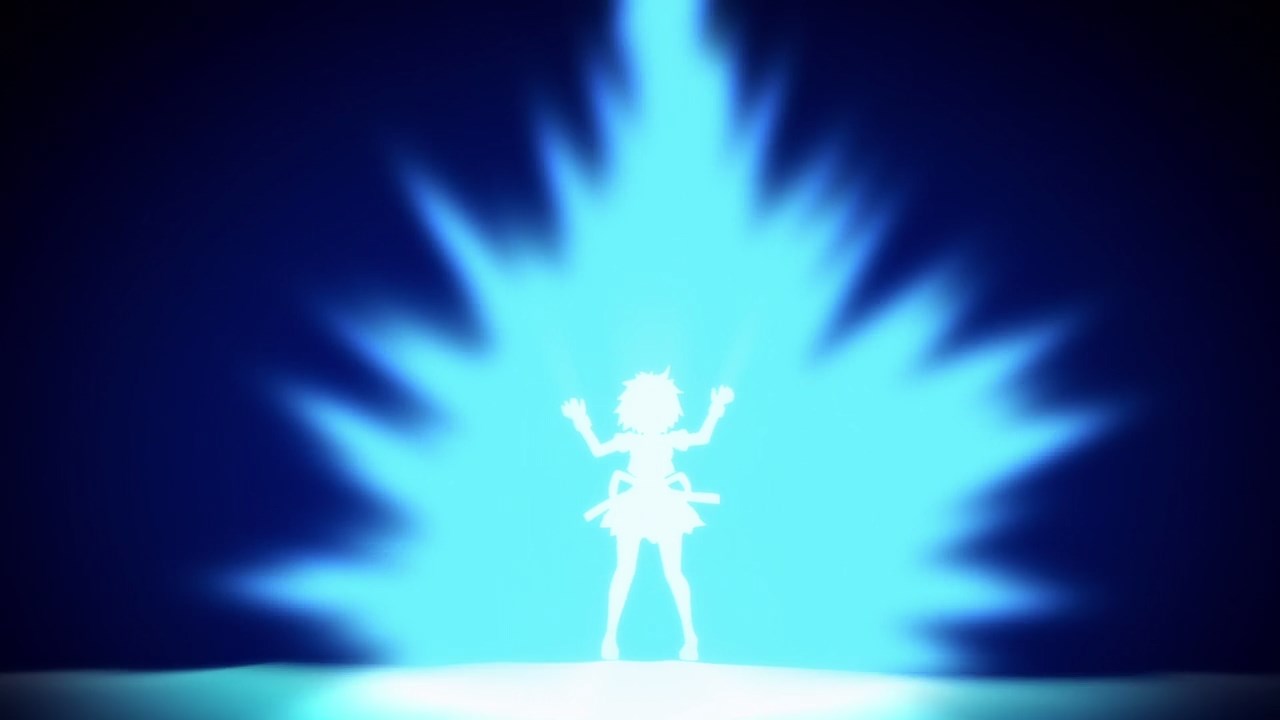 Of course, the only way to find Riri’s hair tie is to combine their Rare Skills since it’ll be hard to find it at the beach or the ocean. It’s like finding a needle on a haystack. 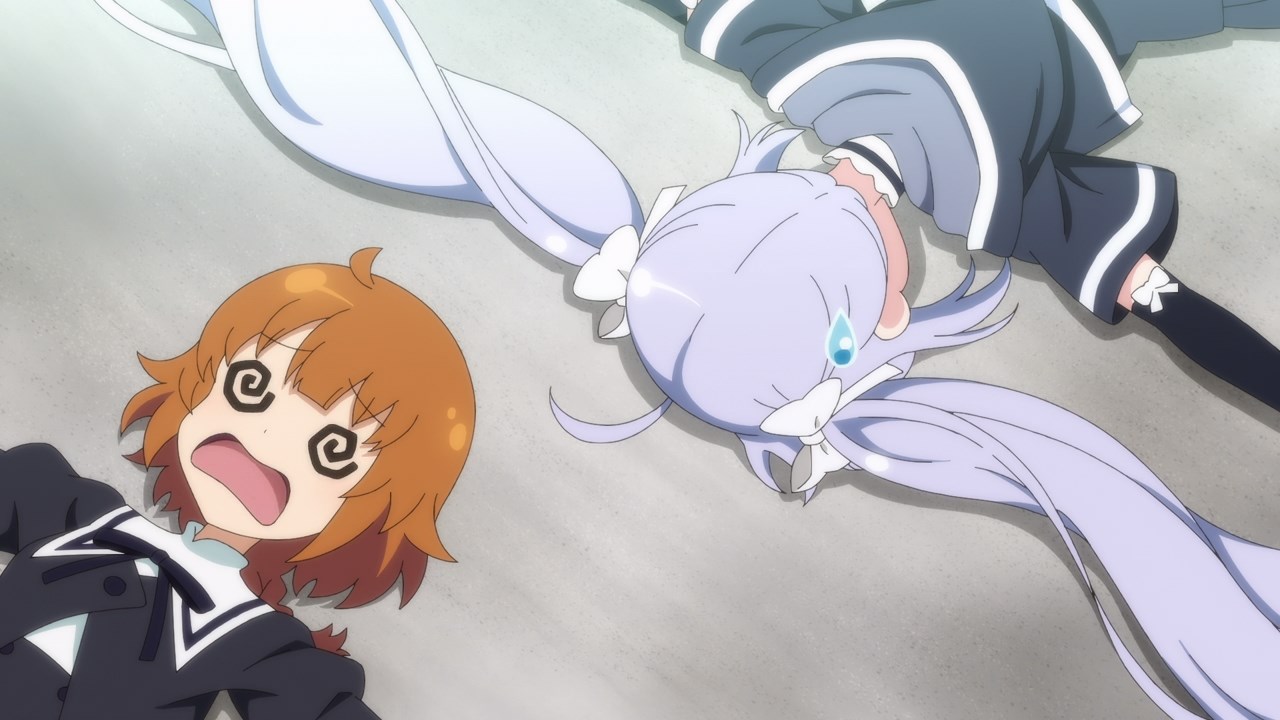 Unfortunately, it doesn’t work since they have vastly different Rare Skills that might not be useful for finding one small item.

Oh yeah, and channeling their Rare Skills onto a single Lily like Fumi Futagawa doesn’t work either since she can’t handle 2 or even 3 skills. At this point, they’re at a loss. 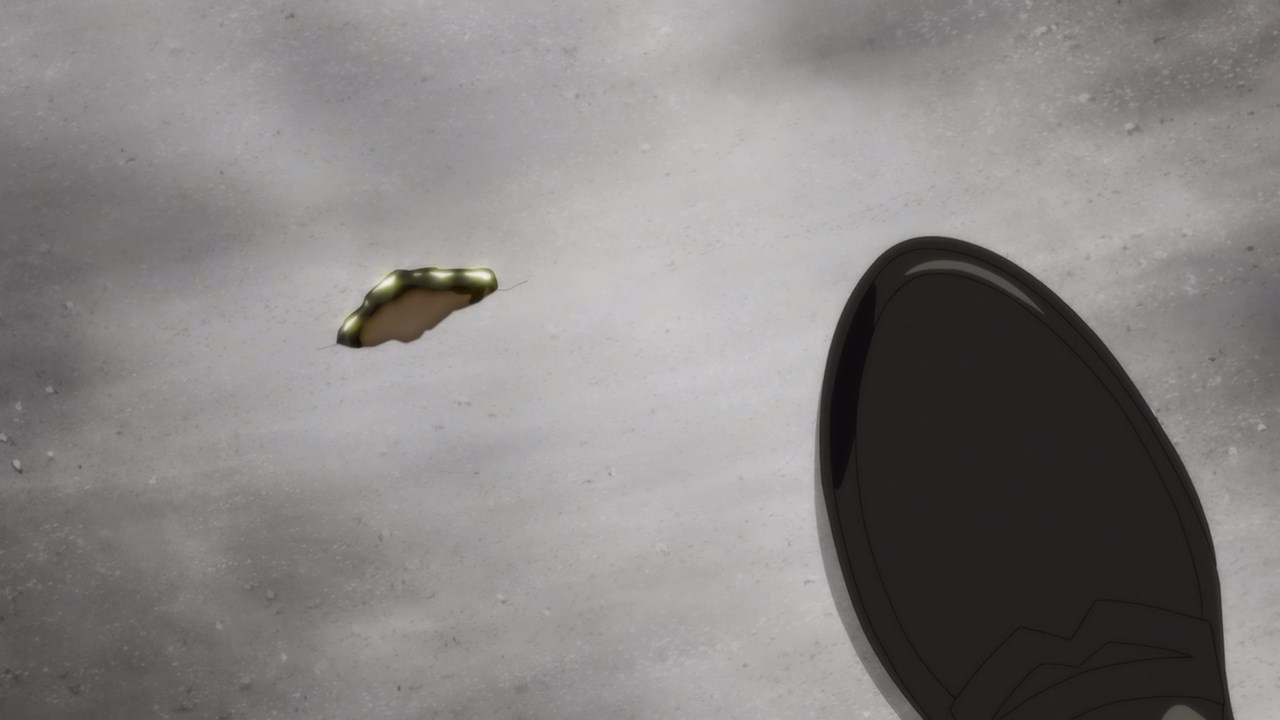 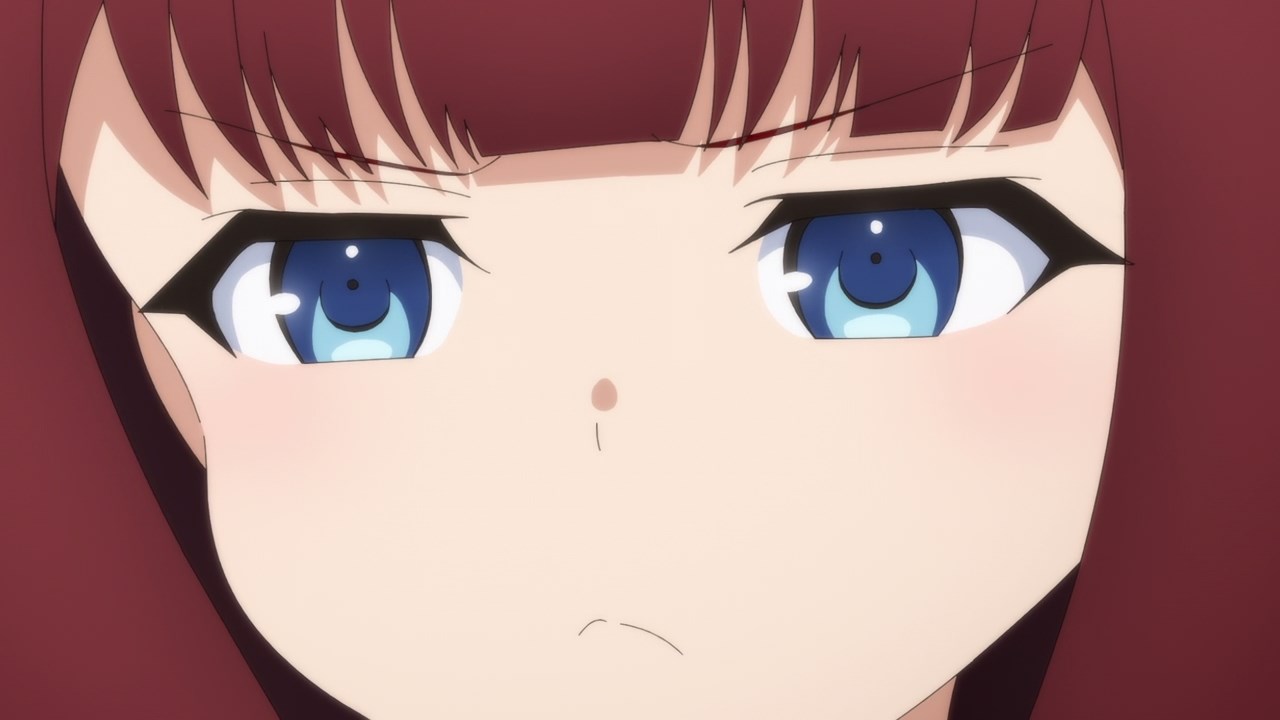 On the other hand, there’s Kaede Johan Nouvelle where she stumbled upon something important.

Wait, isn’t that Riri’s hair tie? If so, is Kaede gonna report it to everyone that she found the item? 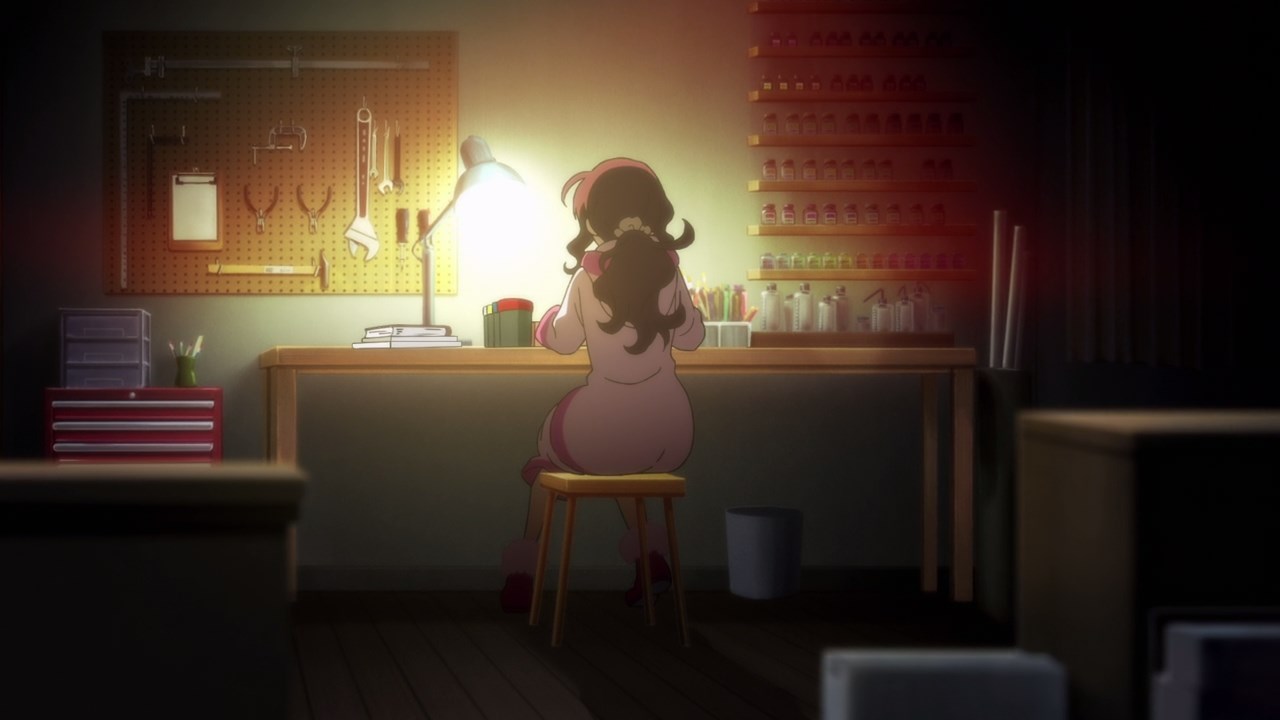 Then again, I feel that Kaede has another plan as she went to a crafting room. I don’t know what she’s making but let’s hope that Kaede is doing it for Riri. 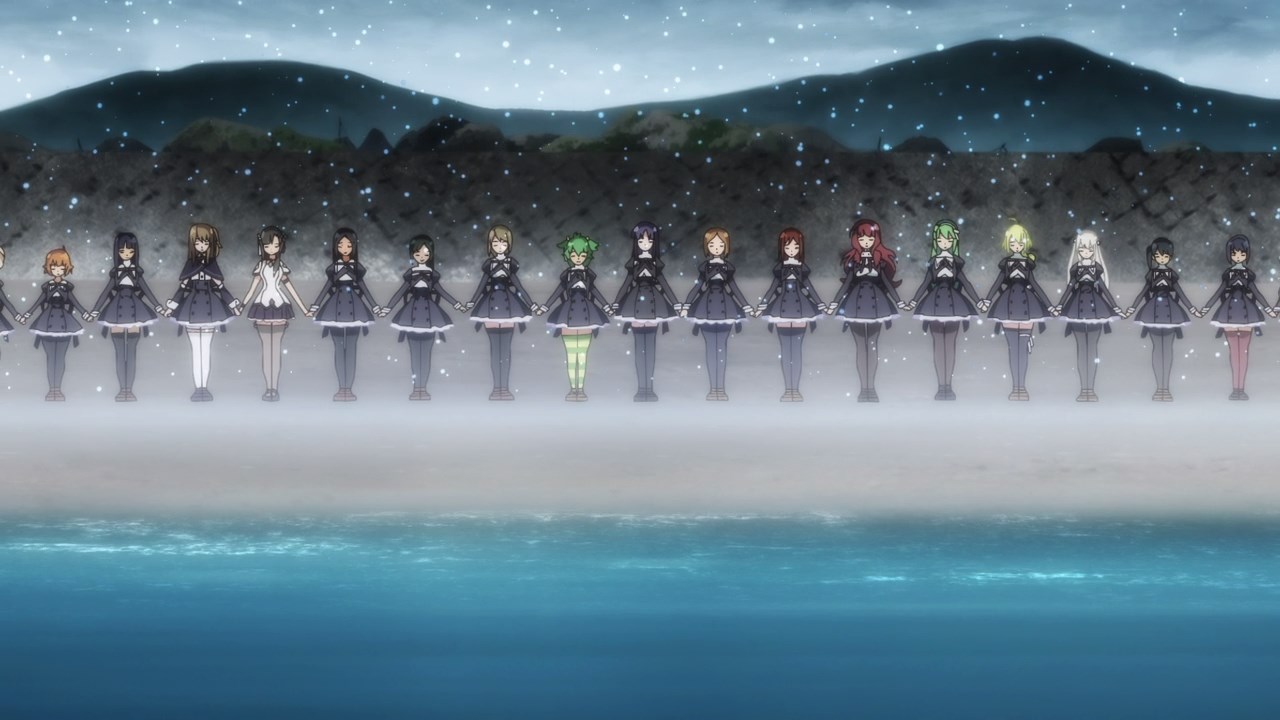 Now then, it appears that the entire school has decided to help the Hitotsuyanagi-tai on finding Riri’s hair tie as they combine their Rare Skills in order to locate it. 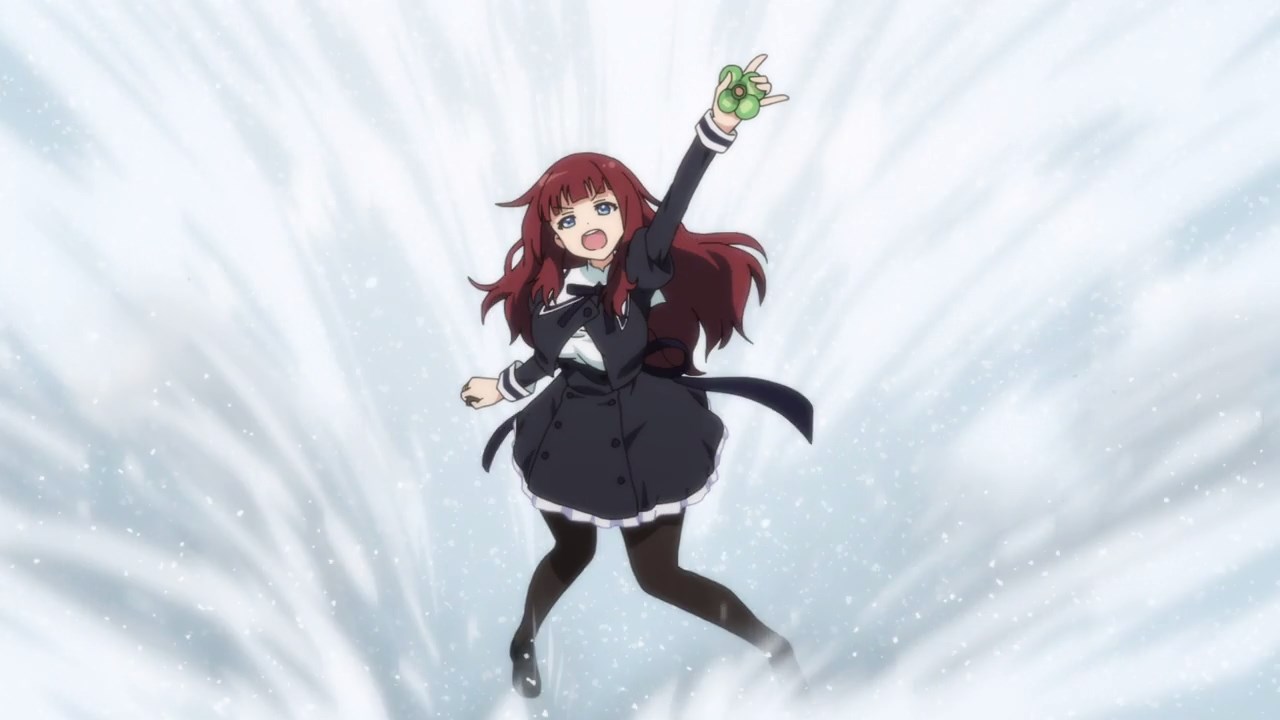 But thanks to them, Riri’s four-leaf clover hair tie has been found Kaede Johan Nouvelle got it from- Wait, that looks different. 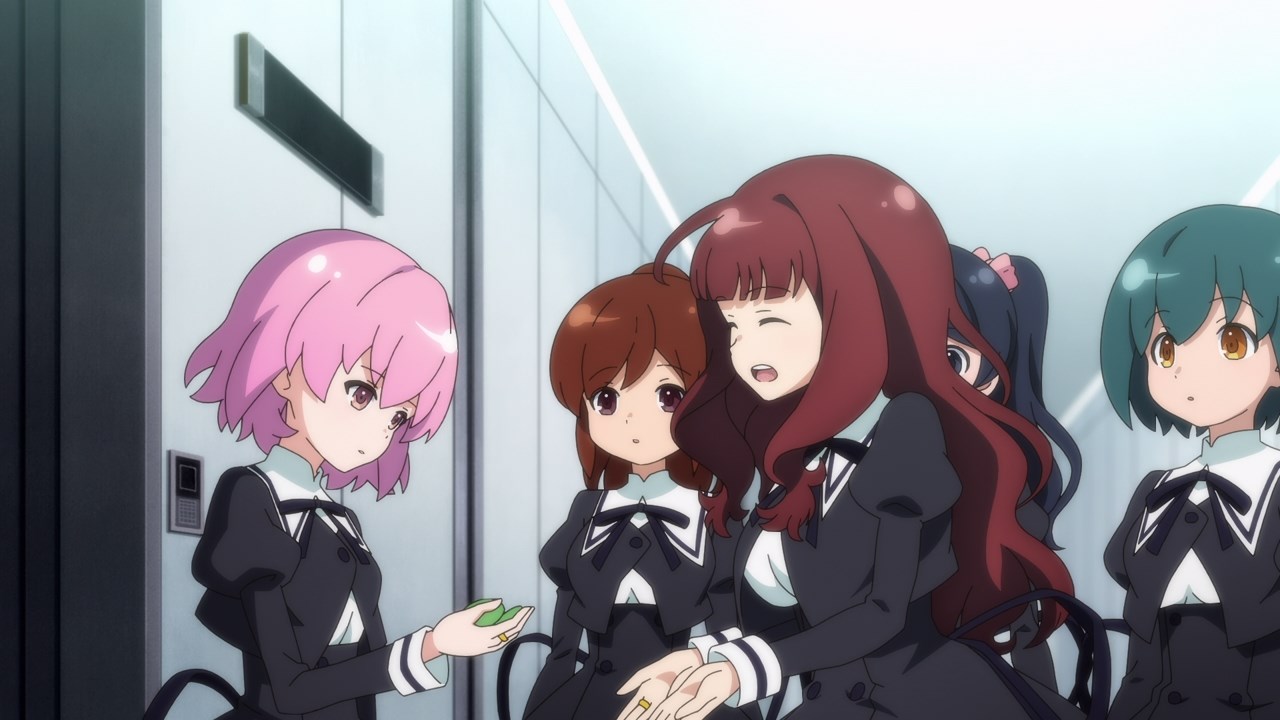 In any case, Kaede gave the hair tie back to its rightful owner. Then again, it appears that Riri doesn’t accept it because her original hair tie has some tiny cracks in it. 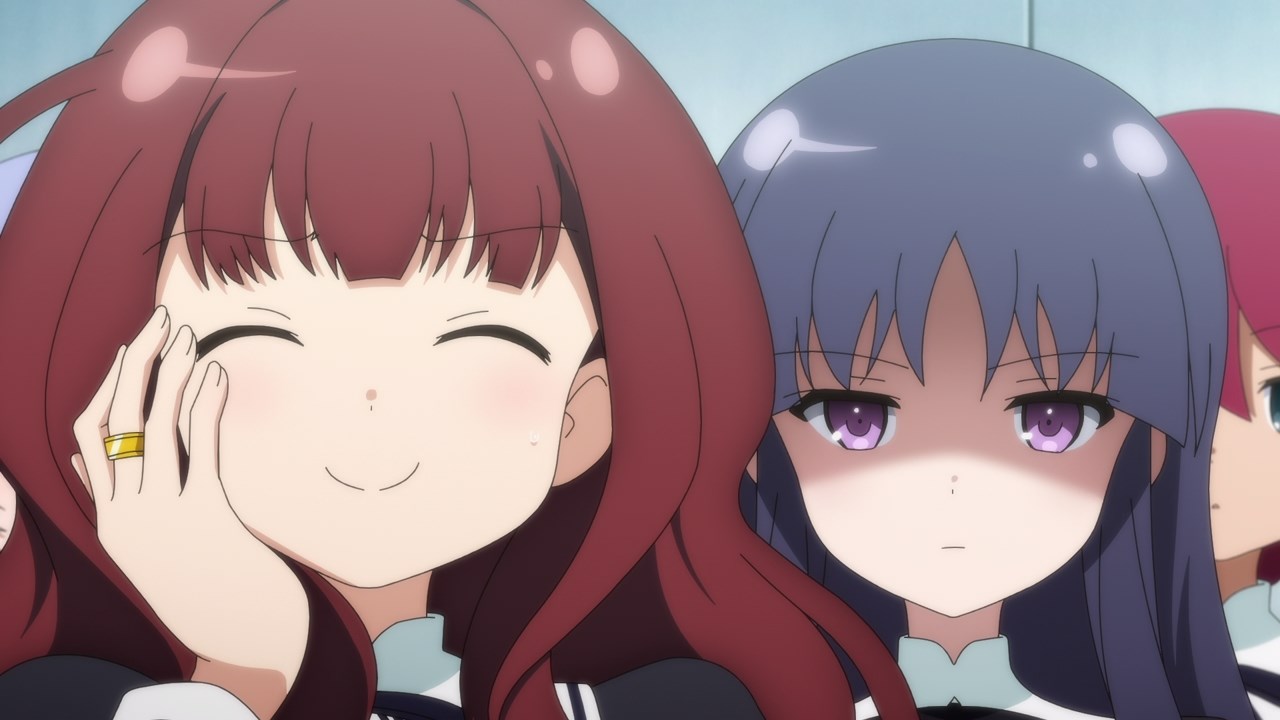 Heck, even Yuyu Shirai doubted on why Kaede Johan Nouvelle brought a brand-new hair tie. Don’t tell me that Kaede made a replica of Riri’s hair tie? 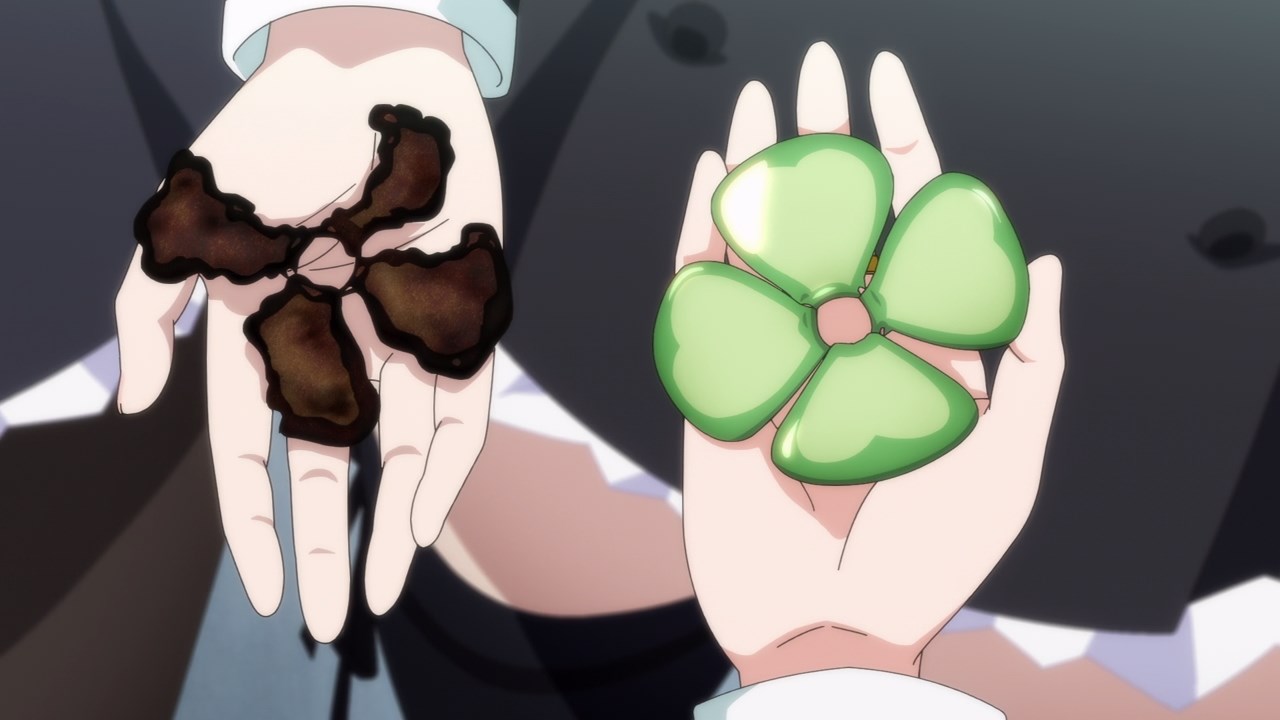 It turns out that Kaede Johan Nouvelle created a replica as the original one got burned during the battle against a HUGE.

While she did her best to cheer Riri up, I have to say that Kaede made a scummy move that not only fooled Riri, but everyone else. 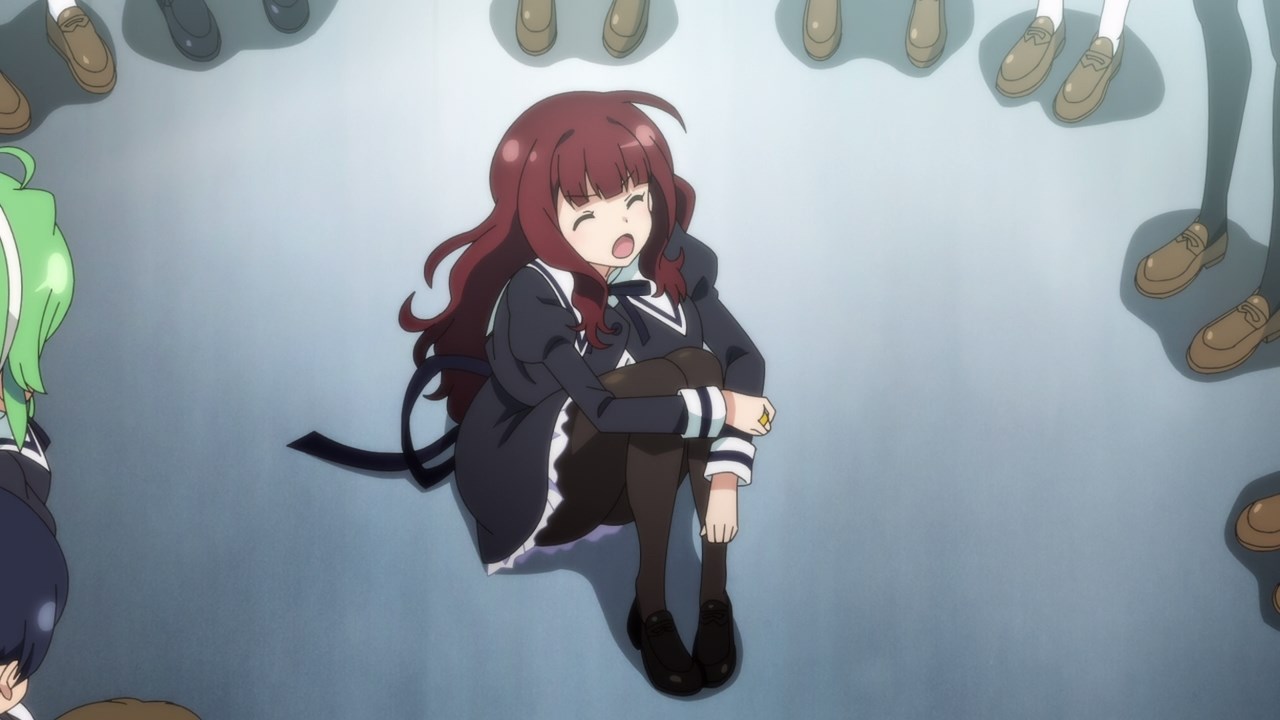 And so, Kaede Johan Nouvelle admitted her crimes as she apologize to everyone from dragging them to her scheme. Of course, I wonder what Riri Hitotsuyanagi thinks about her friend? 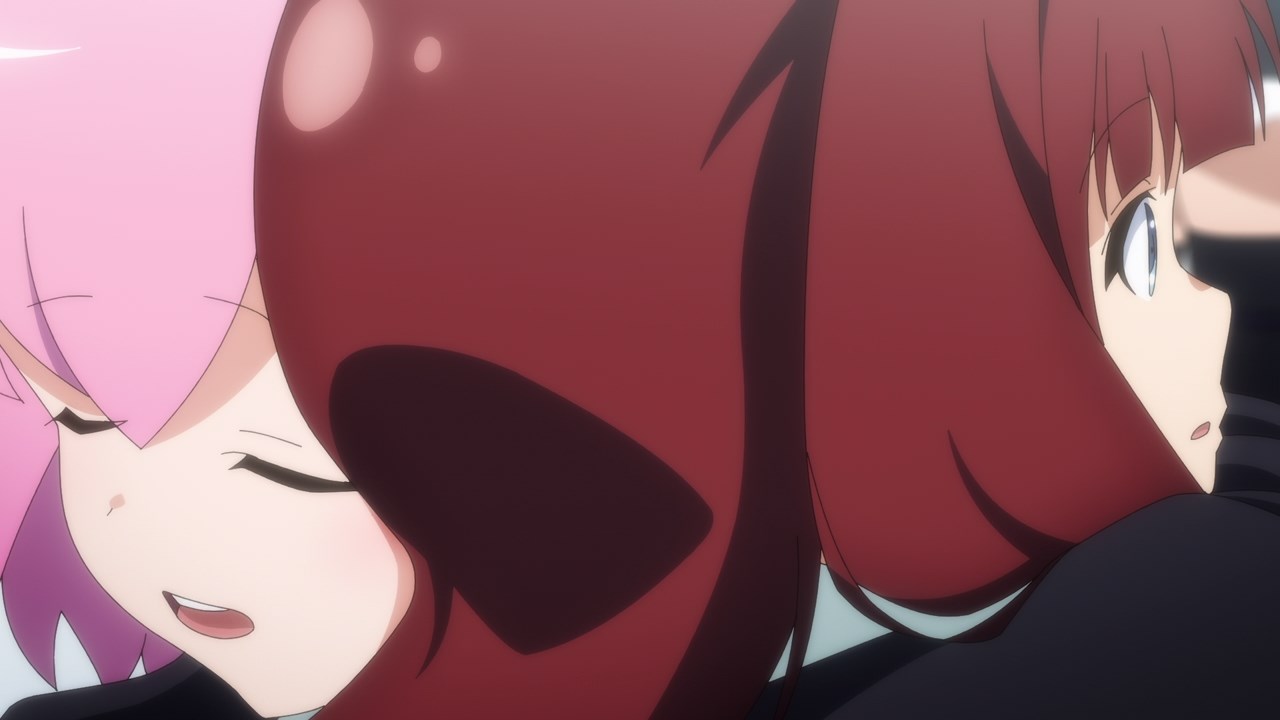 Well, turns out that she actually forgives Kaede as Riri is happy to receive a gift from her friend. All’s well that ends well on this episode! 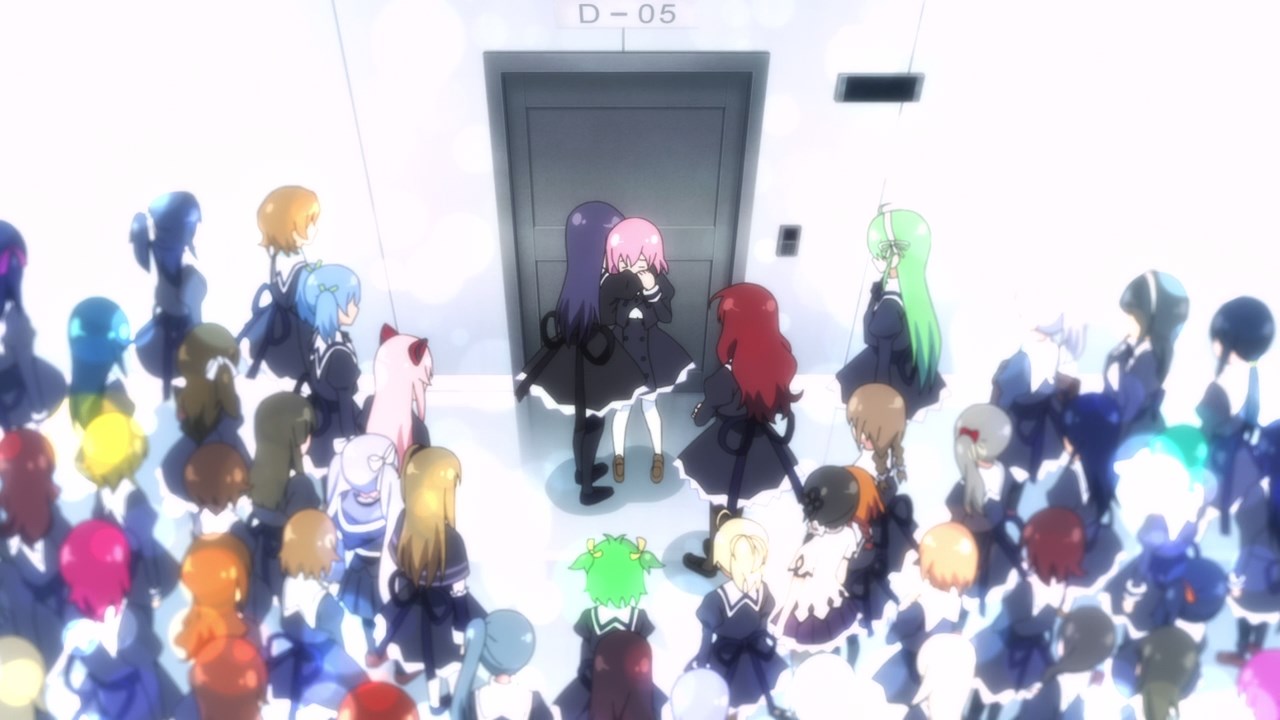 With that said, Riri Hitotsuyanagi is finally free from captivity as she’s welcomed by everyone from Yurigaoka Girls’ Academy. Still, there are some questions that needed answers. 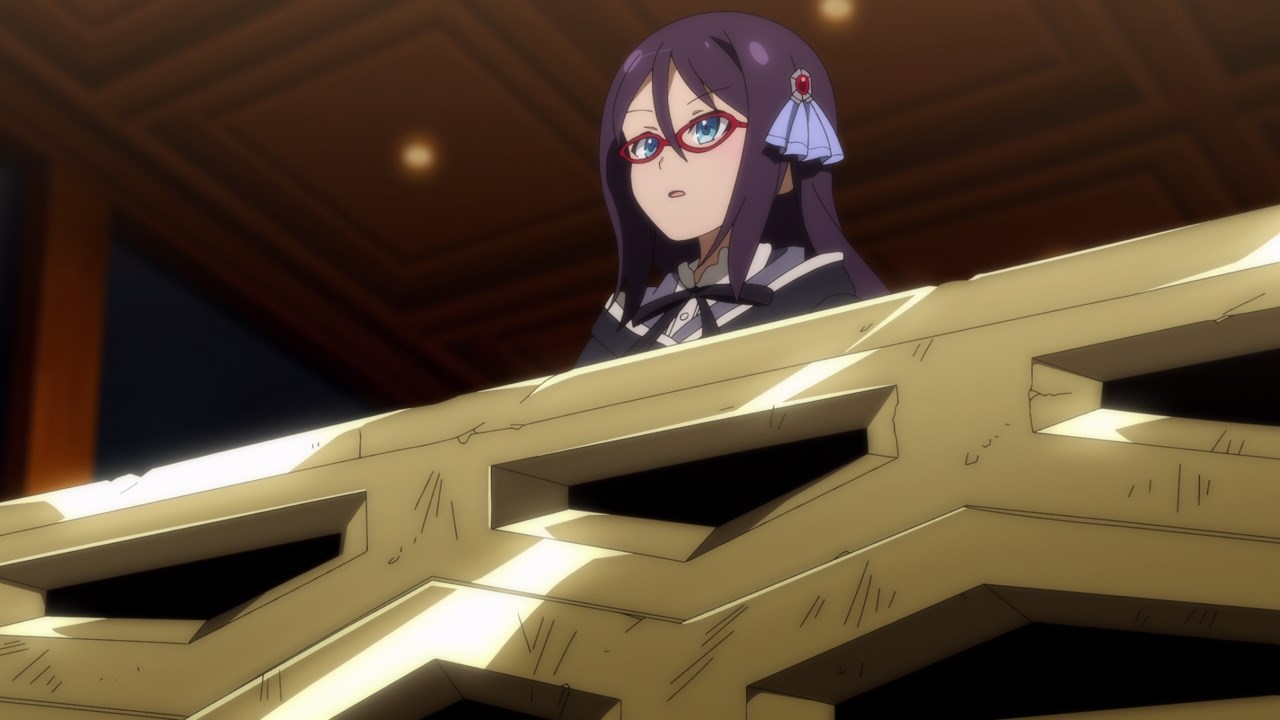 Anyways, Moyu Mashima told Kogetsu Takamatsu that Yuyu Shirai’s Dáinsleif was originally belonged to Misuzu Kawazoe, Yuyu’s former Schutzengel in which she was killed in the line of duty. 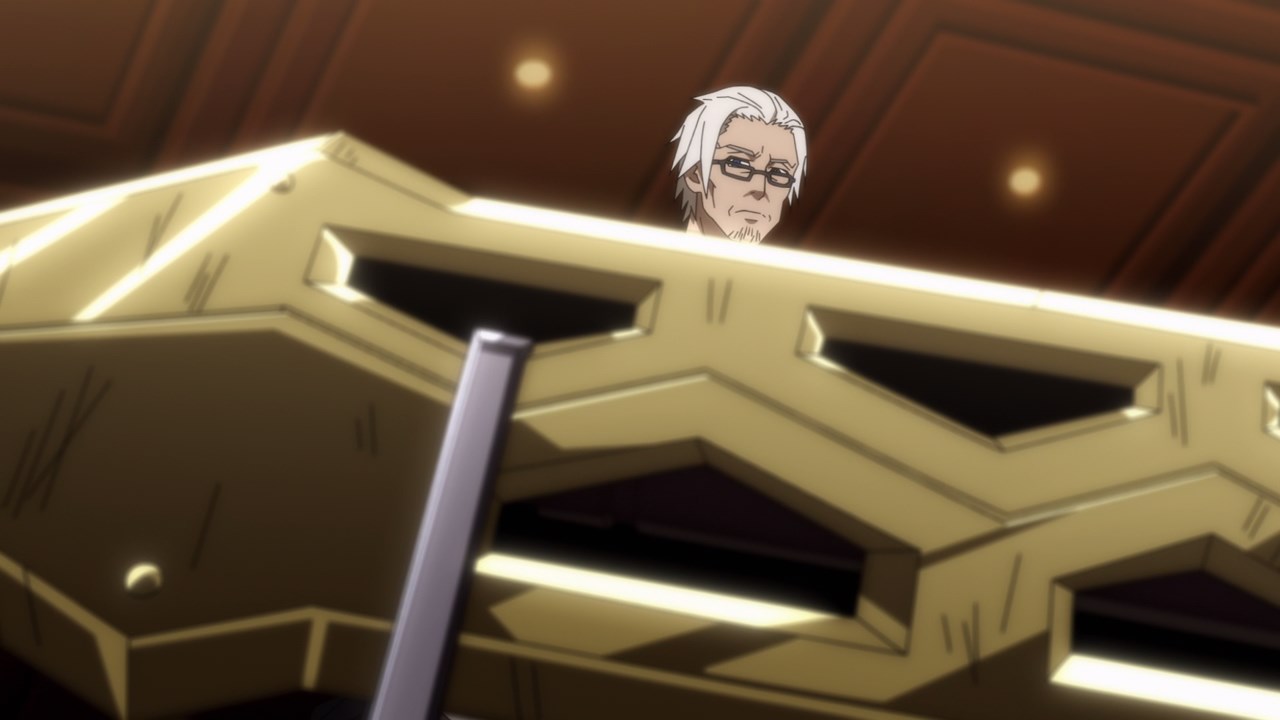 Not only that but the Dáinsleif was altered significantly, possibly the HUGE from Episode 6 where the CHARM was embedded to its body, thus the HUGE receives a power boost which nearly wiped out the entire city had Yuyu and Riri stopped the enemy from destroying it.

Man, seems that it’s getting complicated in regards to HUGE’s origins as the enemy is adapting to Lily’s CHARMs like a glove. Anyways, let’s hope that there won’t be any tragedies on the next episode because stopping the HUGE is gonna be extremely difficult.