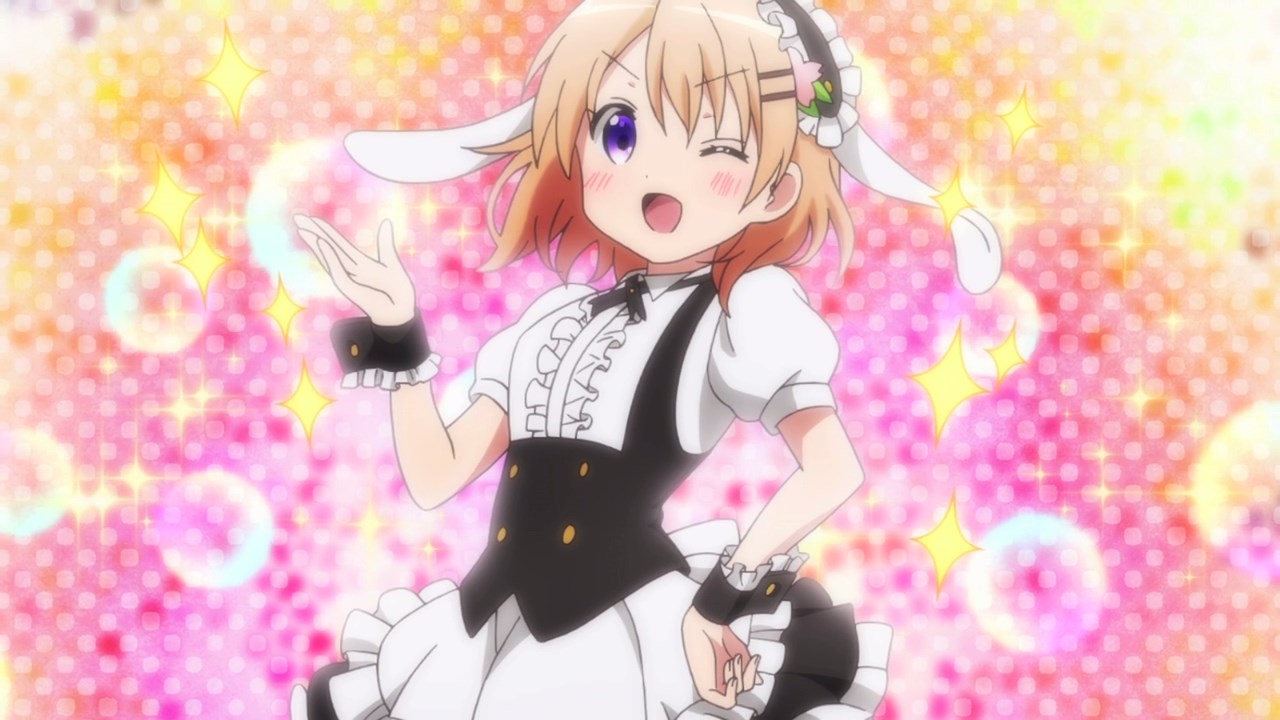 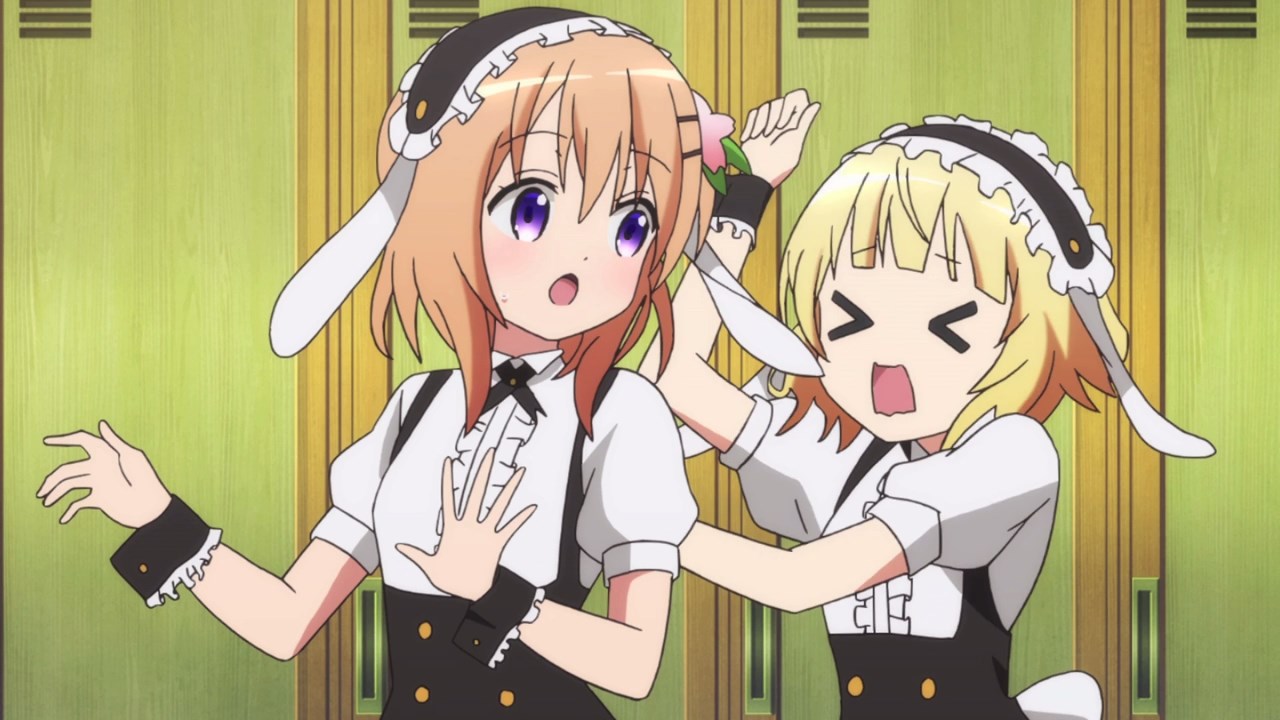 Also, here’s Sharo Kirima where she told Cocoa that she got the greeting wrong. After all, Fleur de Lupin is a cafe for people who have high standards or so I think.

By the way, turns out that Cocoa didn’t leave Rabbit House as she’s actually taking multiple part-time jobs in order to buy a Christmas present for Chino-chan. 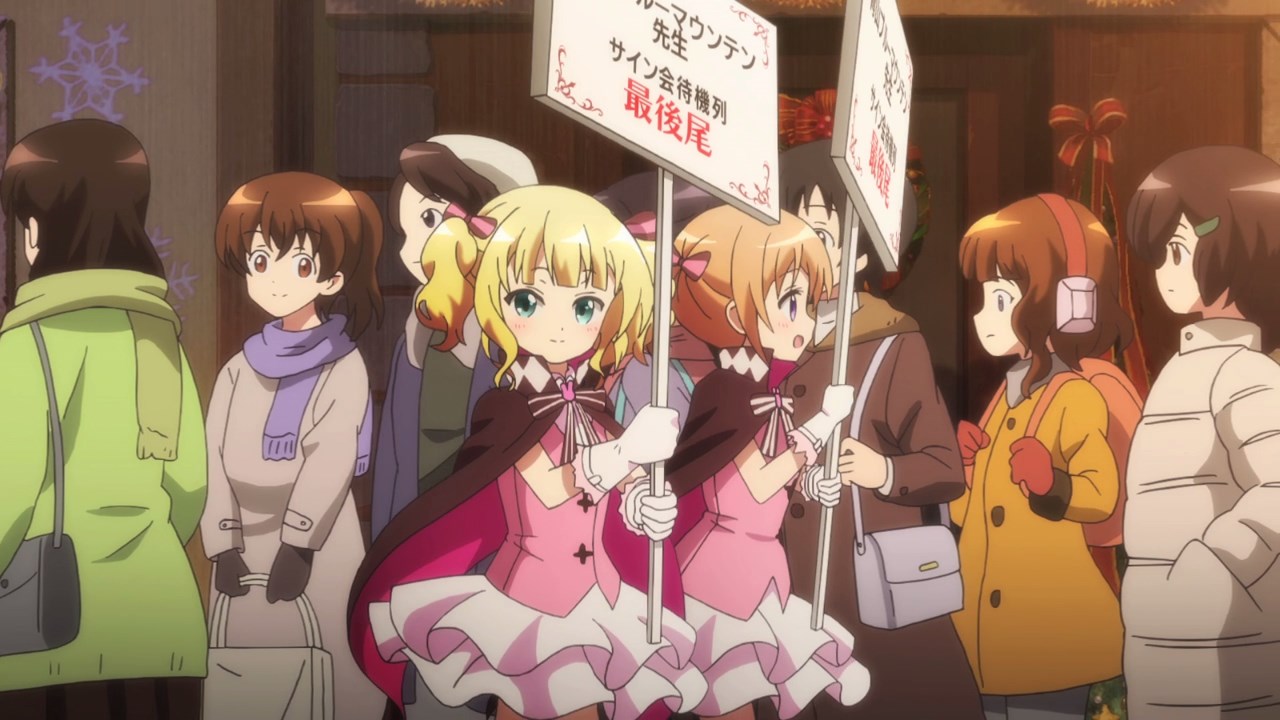 Now then, both Cocoa and Sharo went to the streets to promote “Blue Mountain” Aoyama’s latest novel, and it’s a long line where fans wanted their book signed by the author herself. 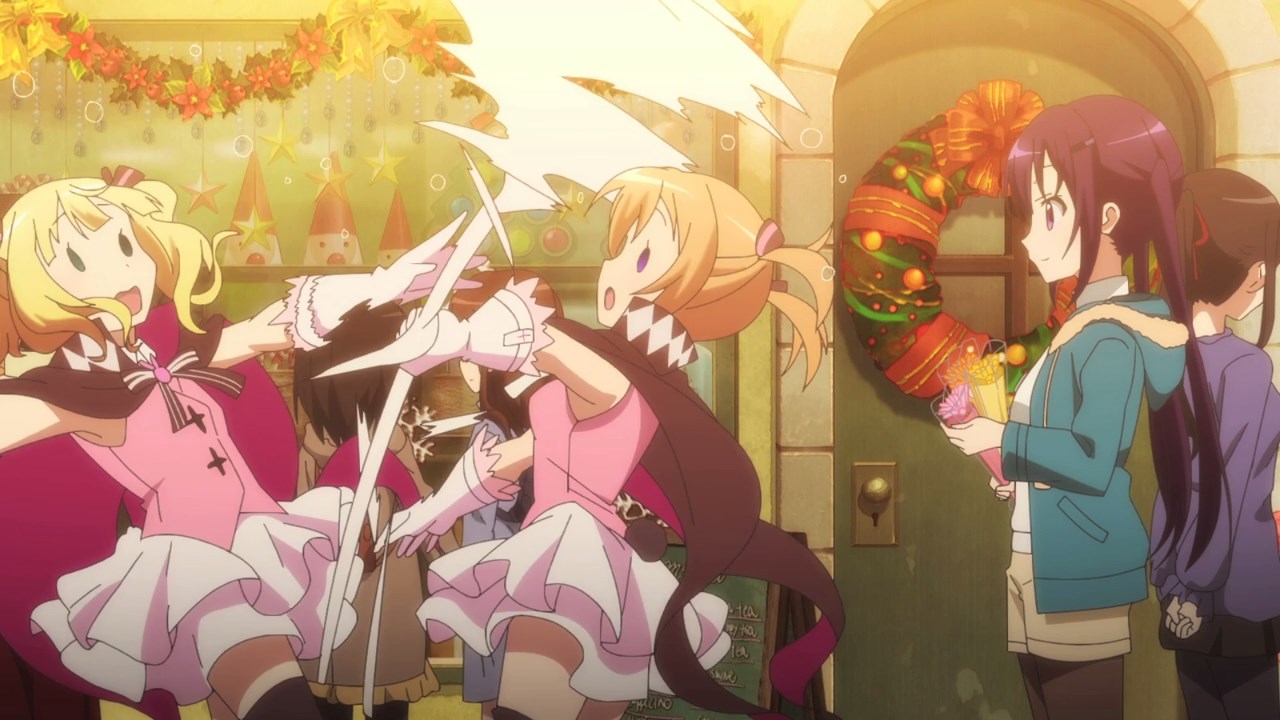 Also, Rize Tedeza and the rest are here to see Aoyama-sensei as both Sharo and Cocoa are surprised to see their friends at the book-signing event. 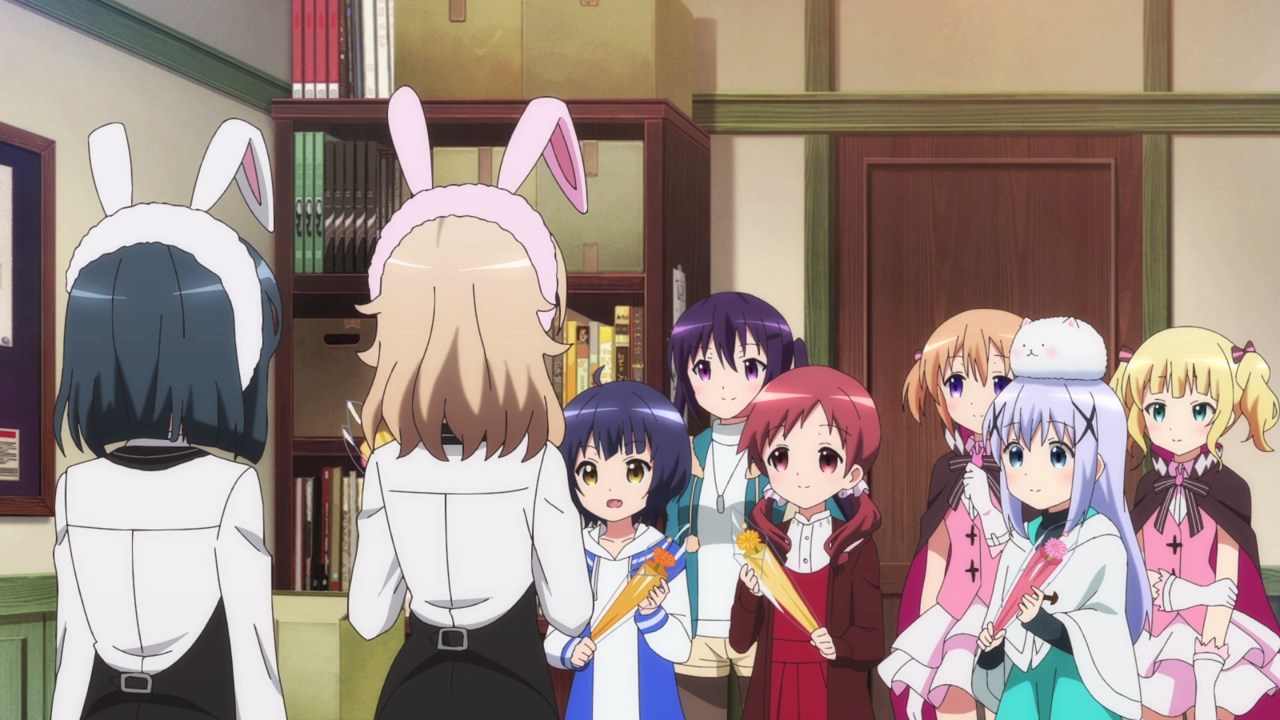 But anyways, Chino Kafuu and the rest are here to congratulate “Blue Mountain” Aoyama for her successful career as a novelist. How sweet of them! 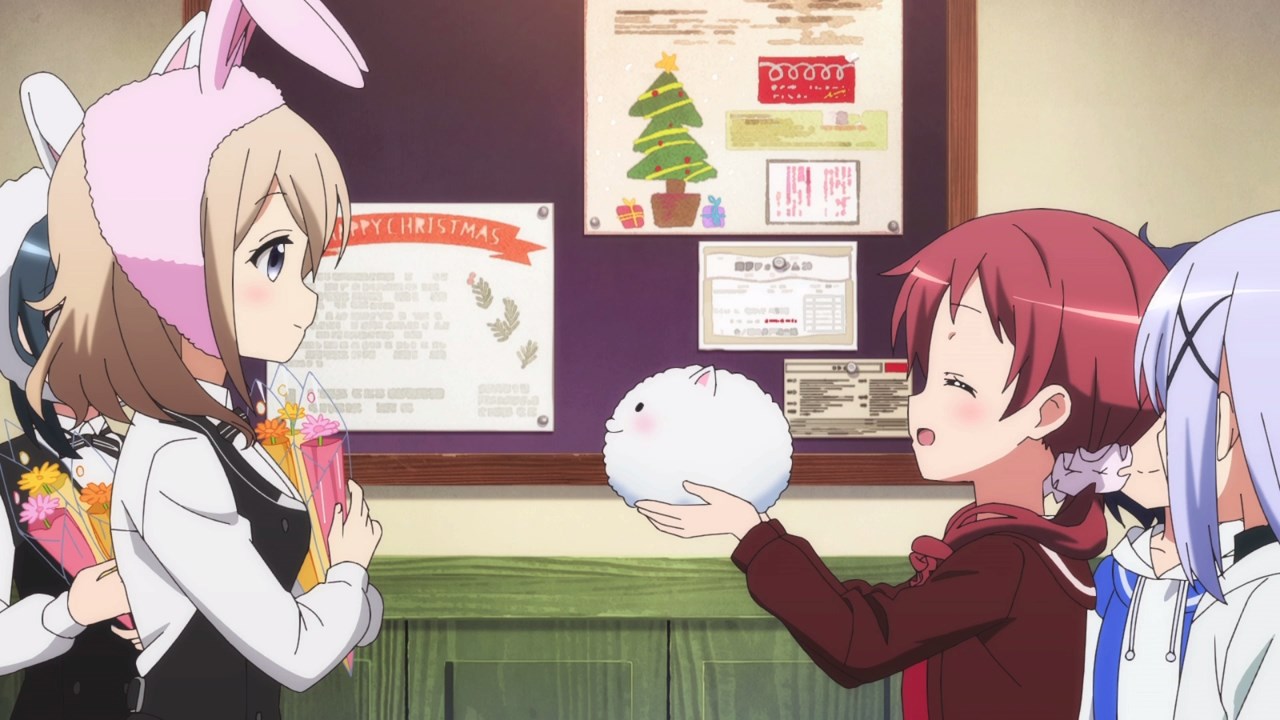 Oh yeah, and here’s Megumi Natsu where she presents Tippy to Aoyama-sensei. Um Megu, I hope you don’t actually give Tippy to the novelist even though Chino’s grandfather is inside that angora rabbit. 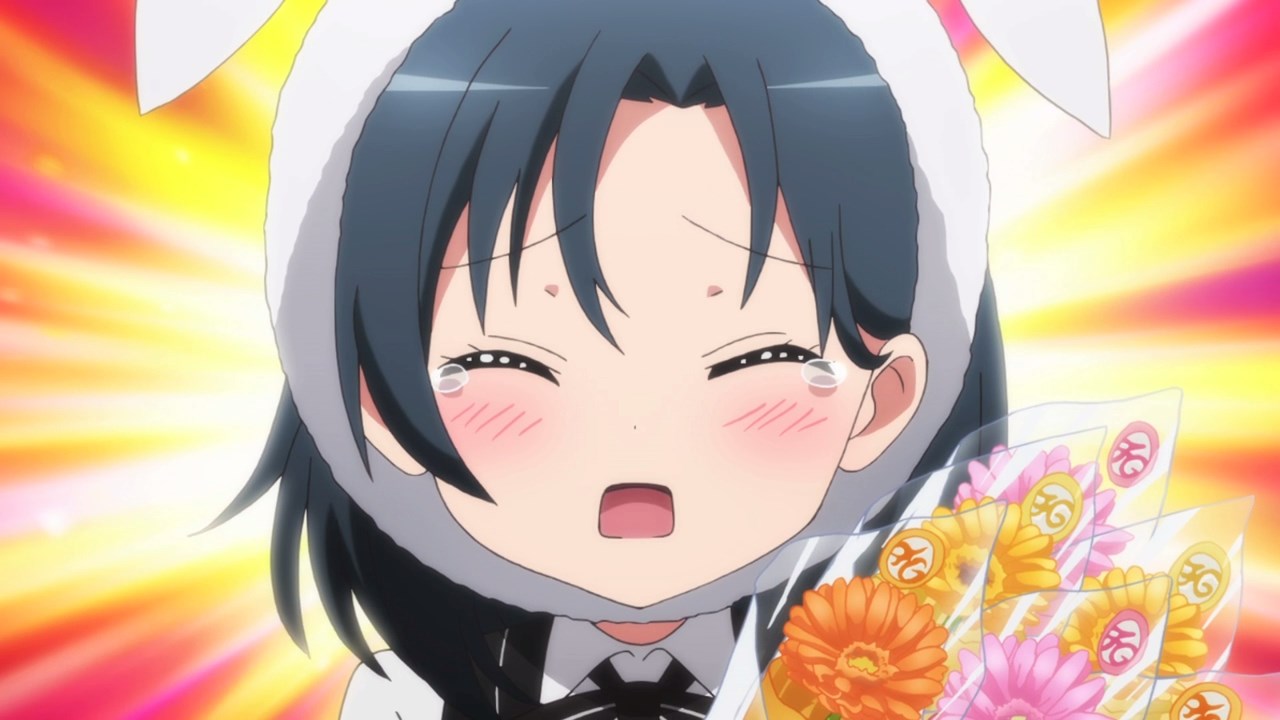 Also, here’s Rin Mate where she’s happy that Midori-san got fans. But you know what, I hope Aoyama’s editor won’t get stressed out because finding the author is a pain. 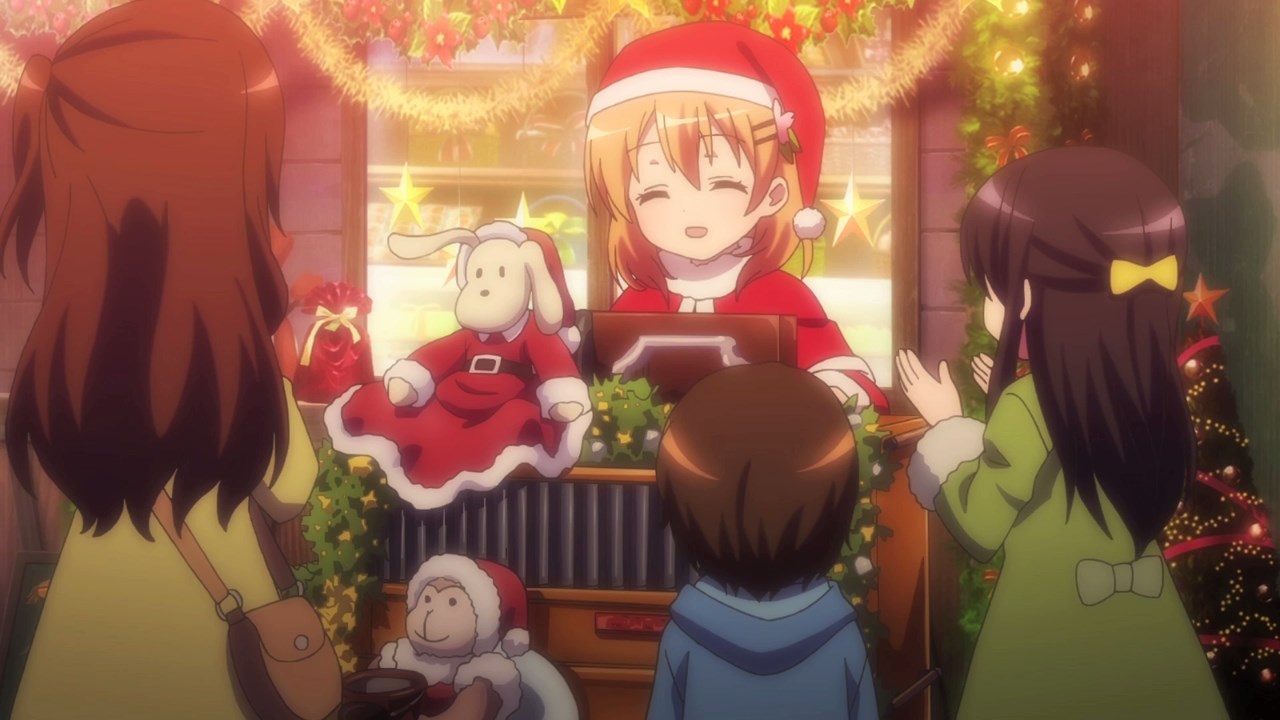 But let’s go back to Cocoa Hoto where she still taking various jobs to buy a gift for Chino-chan. 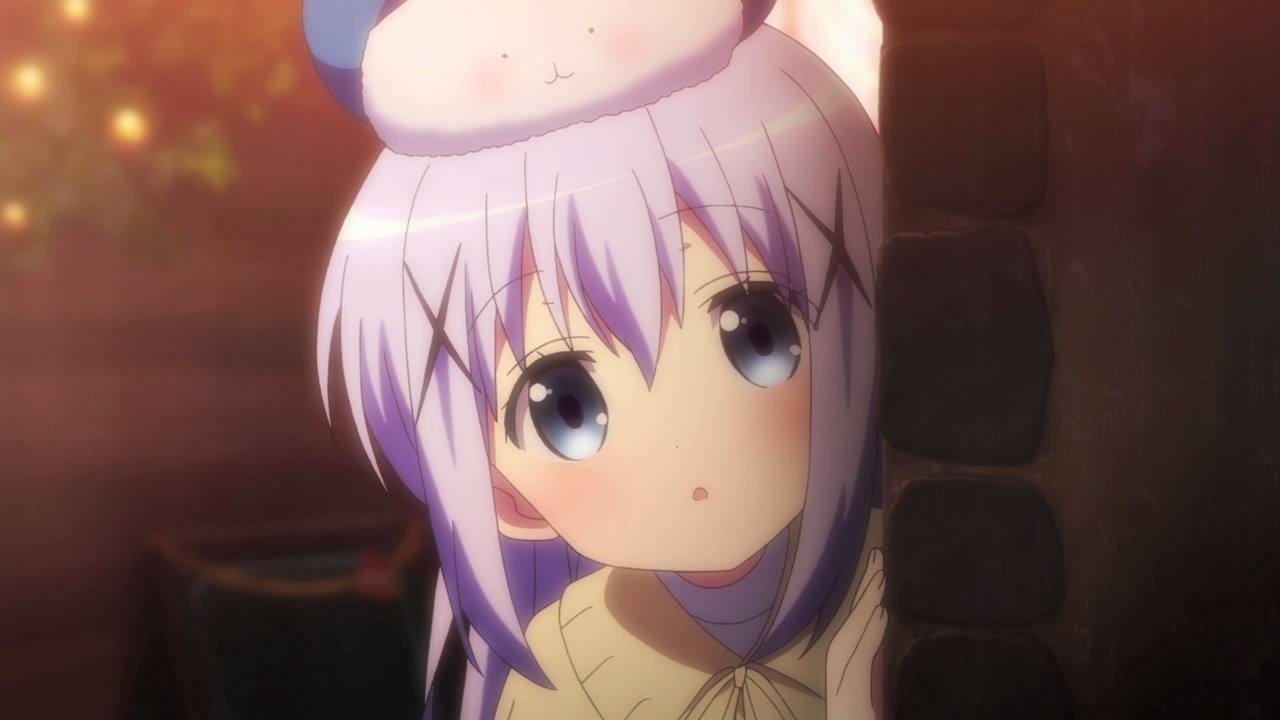 And speaking of Chino Kafuu, she’s surprised that Cocoa is working hard. Let’s hope that Cocoa is okay since handling multiple jobs is tiring. 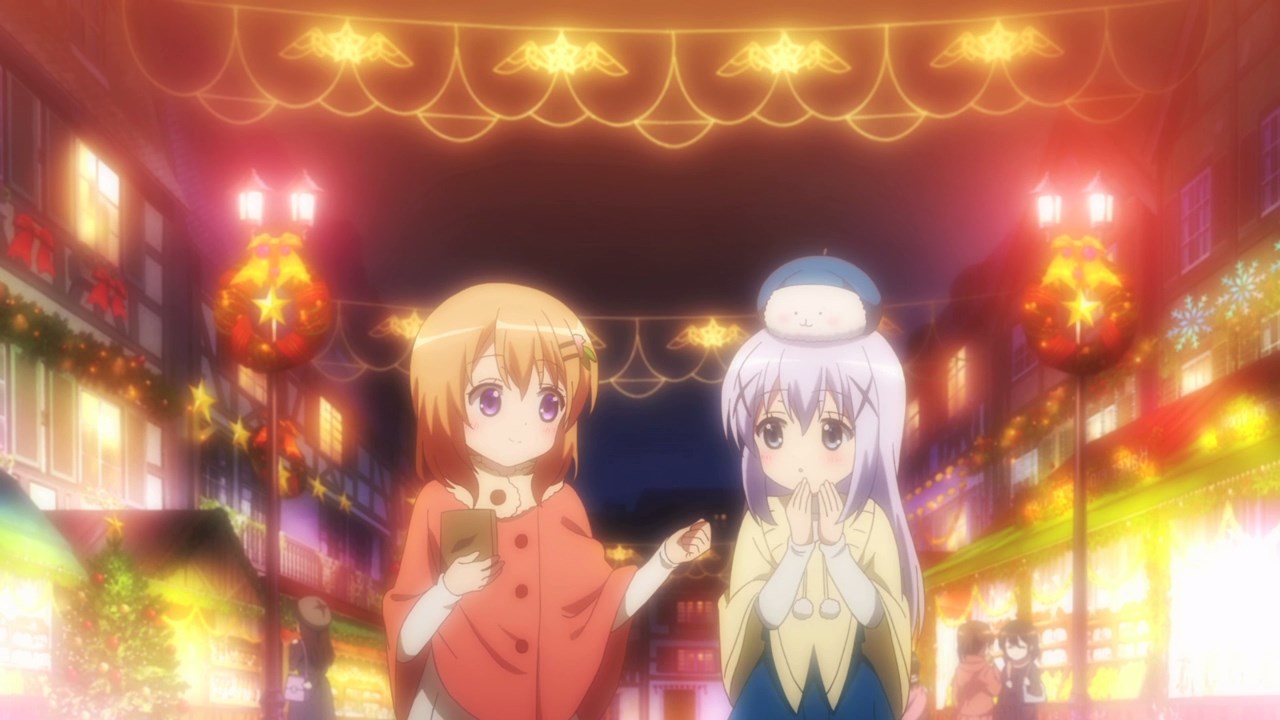 But you know what, I think Cocoa is doing fine as she can still work at Rabbit House. It’s the holiday season after all. 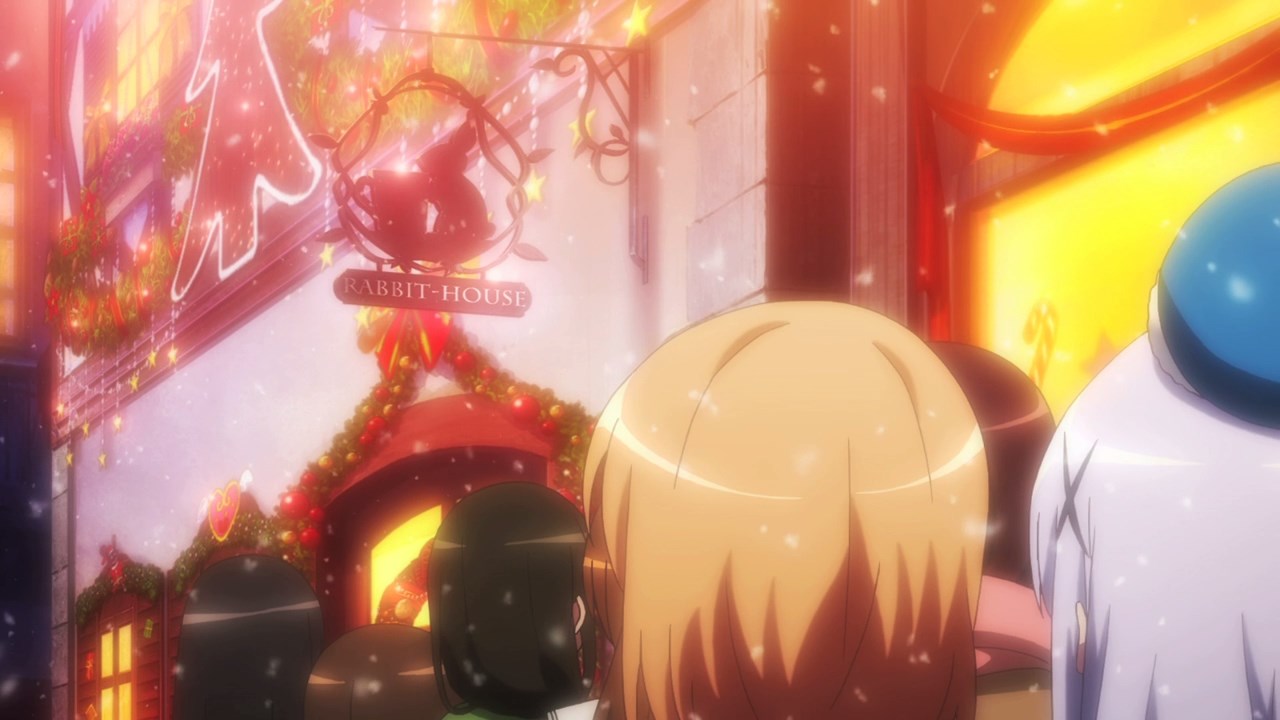 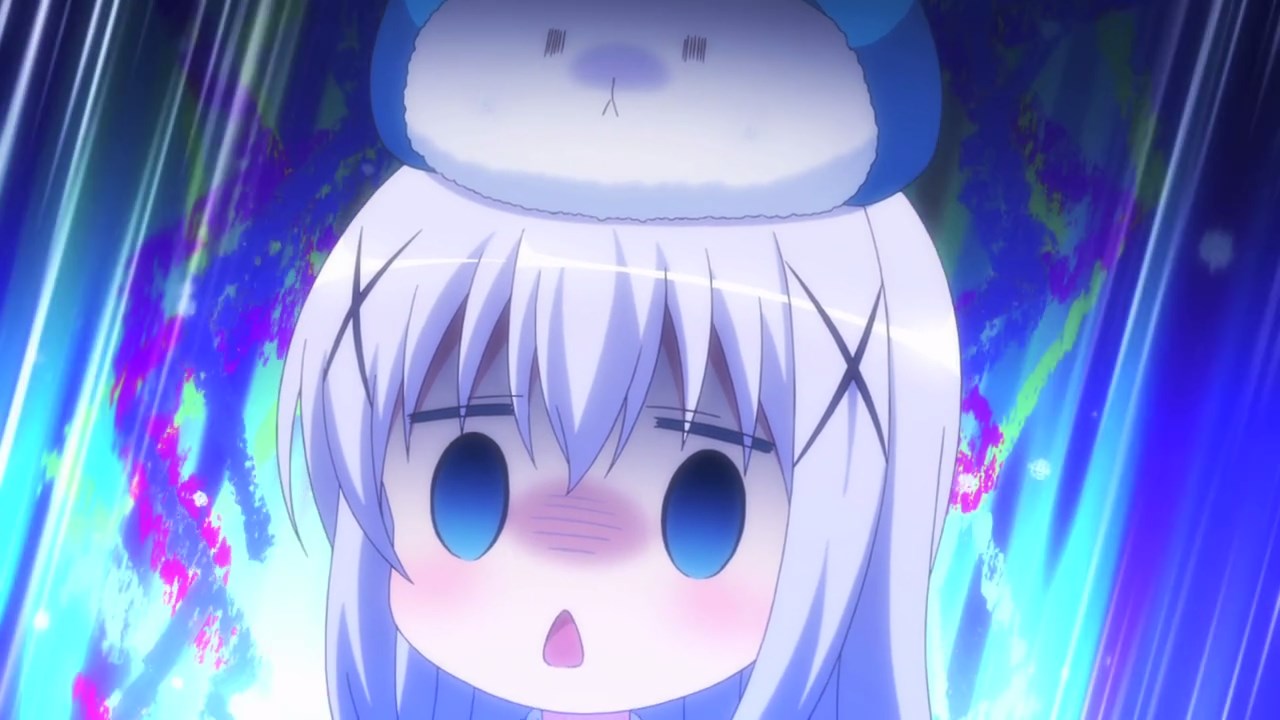 Unfortunately, Rabbit House is jam-packed as Chino-chan and Tippy didn’t realize that they’re not there to help the customers. Seriously, is Rize-san there? 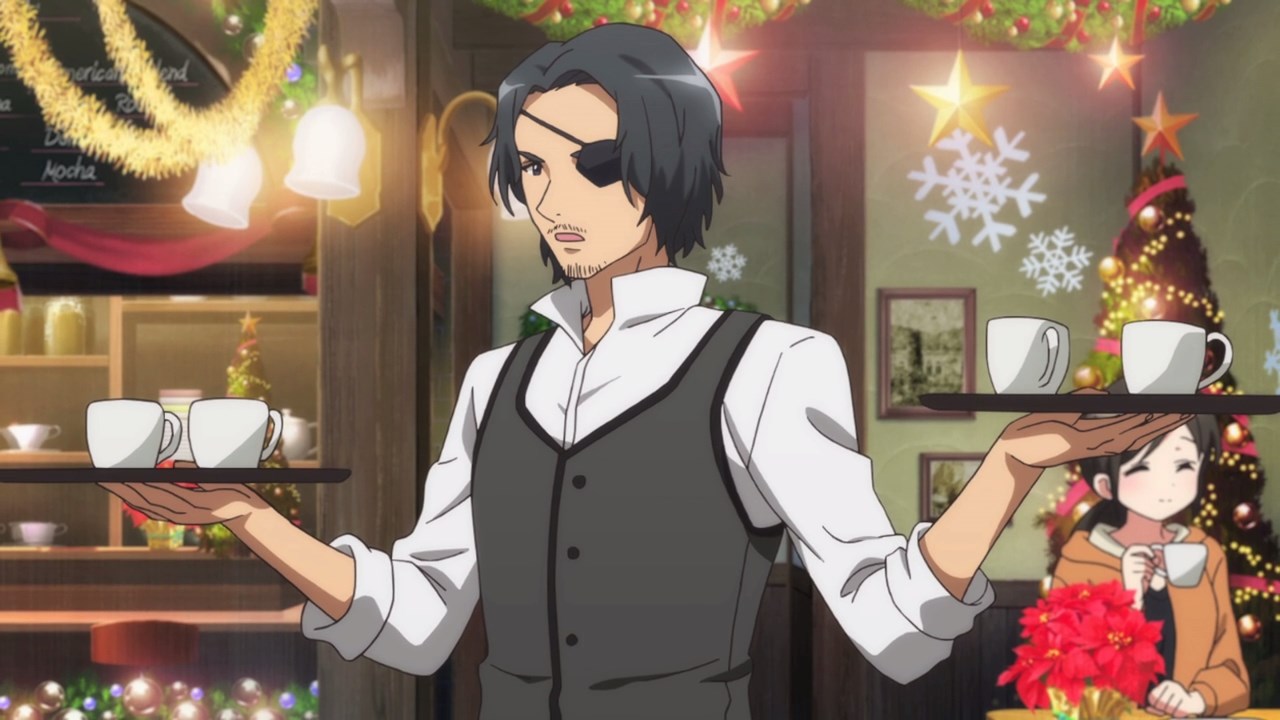 Oh, it turns out that her father is there to help Takahiro-san. Well then, looks like it’s time for Chino and Cocoa to serve the customers. 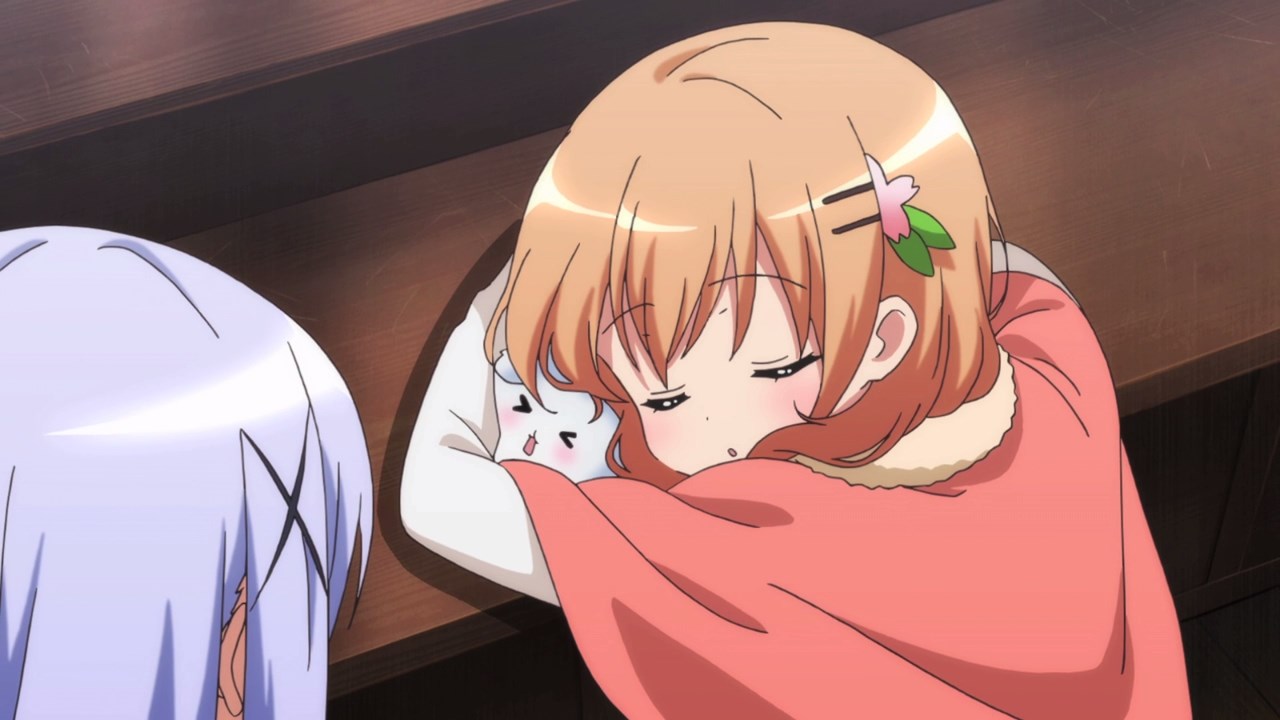 Except that Cocoa-san fell asleep where she used Tippy as a pillow. Oh I hope Tippy is okay ’cause Cocoa is a bit heavy. 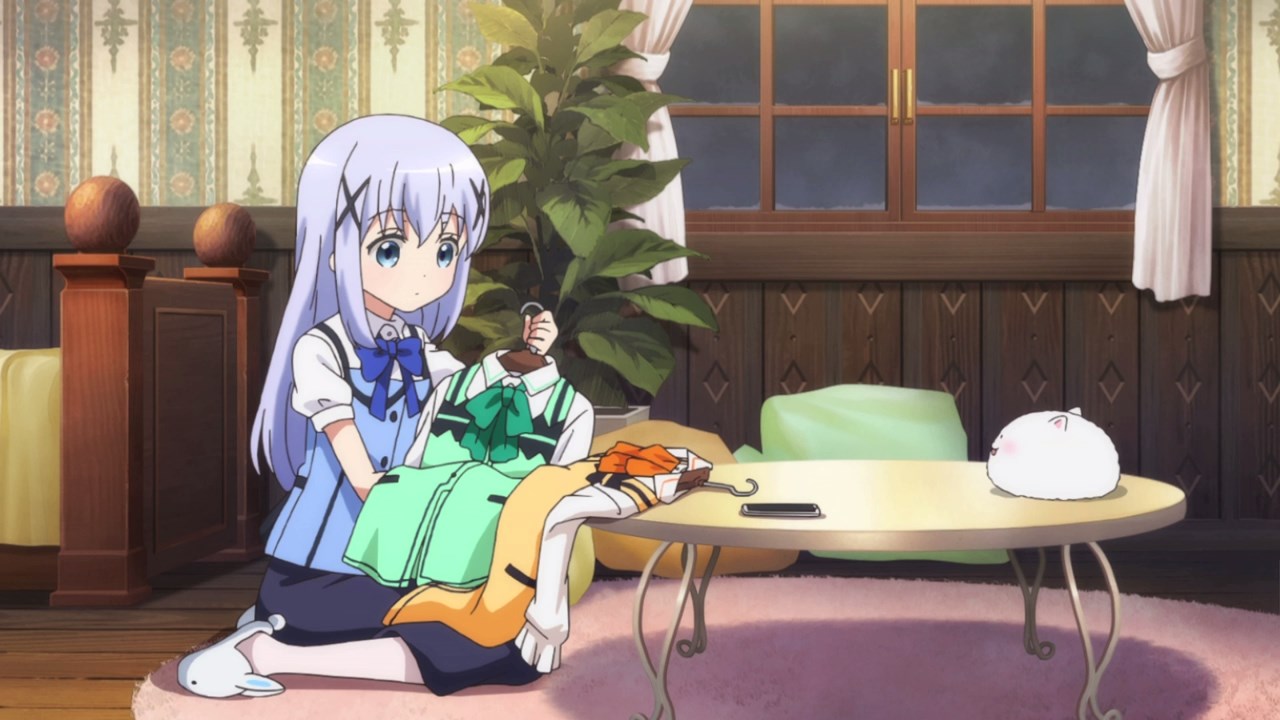 Now that Cocoa Hoto is out, looks like Chino Kafuu will have to seek assistance from Chiya Ujimatsu and Sharo Kirima. Heck, she even have their uniforms ready in case they accepted Chino’s help.

Well then, I’ll see you next time where Christmas continues in Rabbit House! And one more thing, I think Cocoa needs a well-deserved rest after working various jobs.