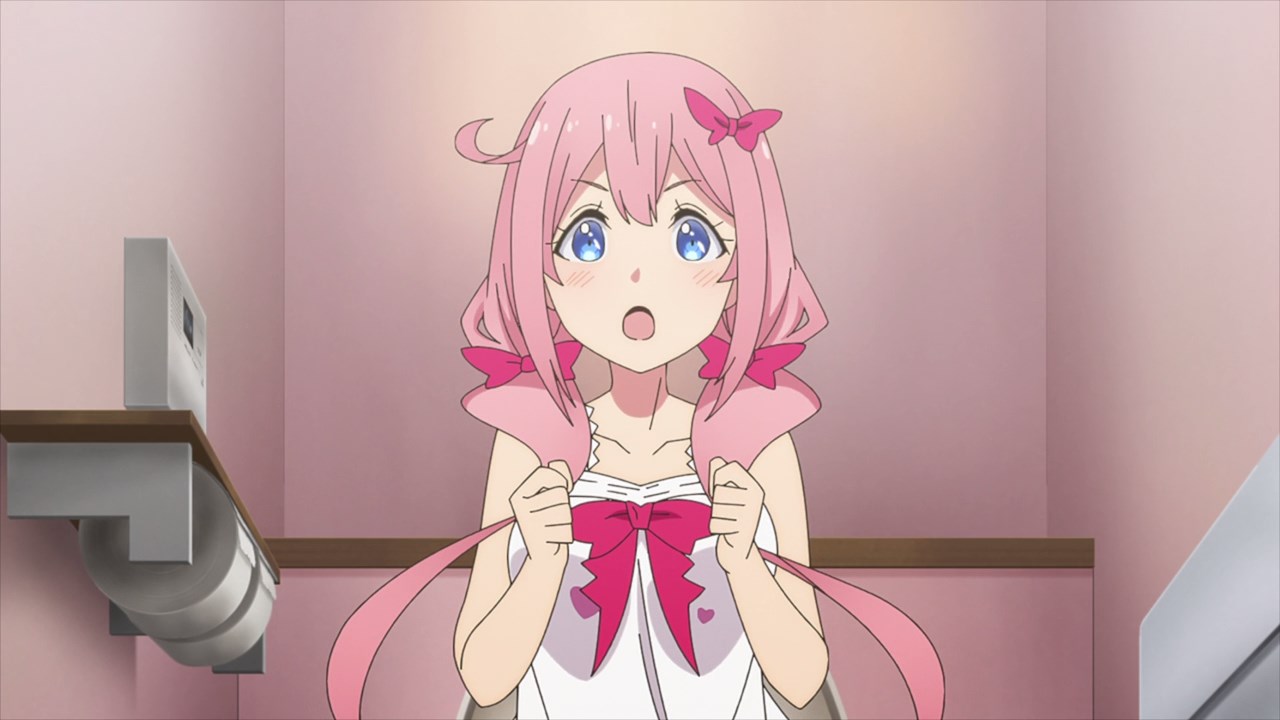 Alright everyone, you thought that their 2nd mini concert is over, but it turns out that Fruit Tart will also perform in the afternoon as Ino Sakura is trying to calm herself down by going to the toilet. 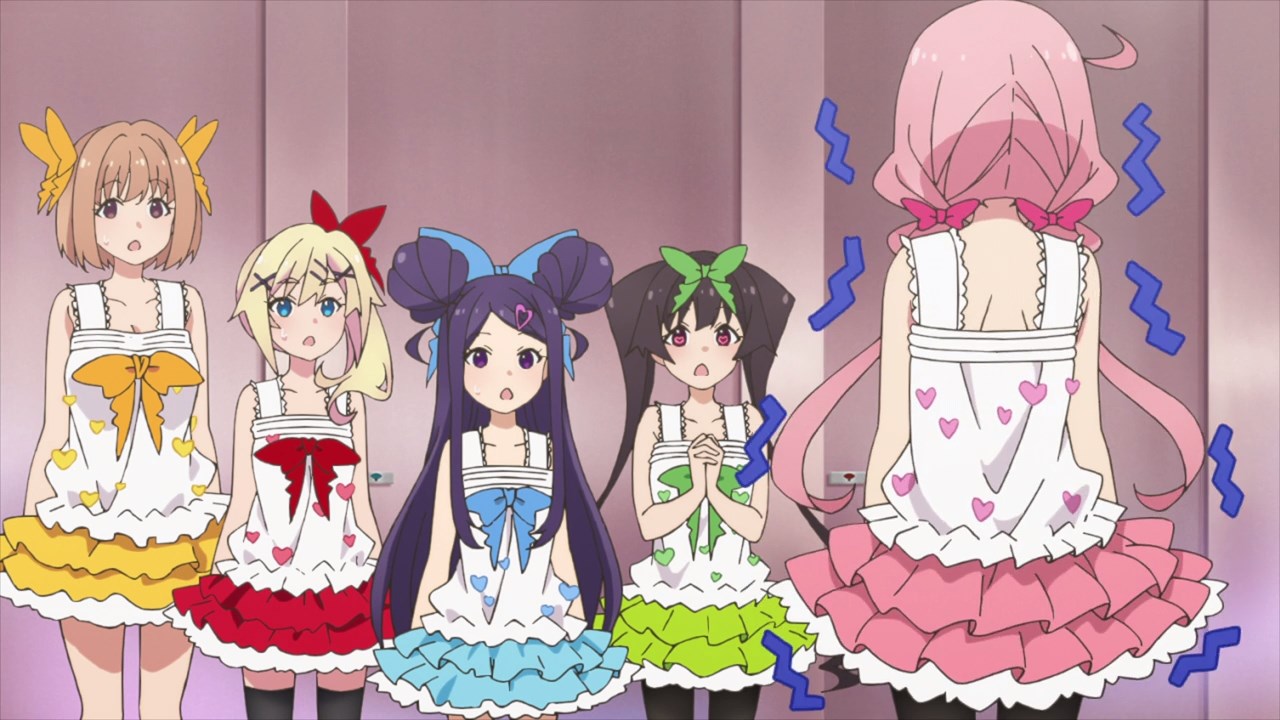 Also, Roko Sekino and the rest are here to as they wait for their fellow idol to finish relieving herself, although Ino-chan is embarrassed that her roommates waited her to finish peeing.

With that said, it’s time for Fruit Tart to perform again! But, there’s one tiny problem… 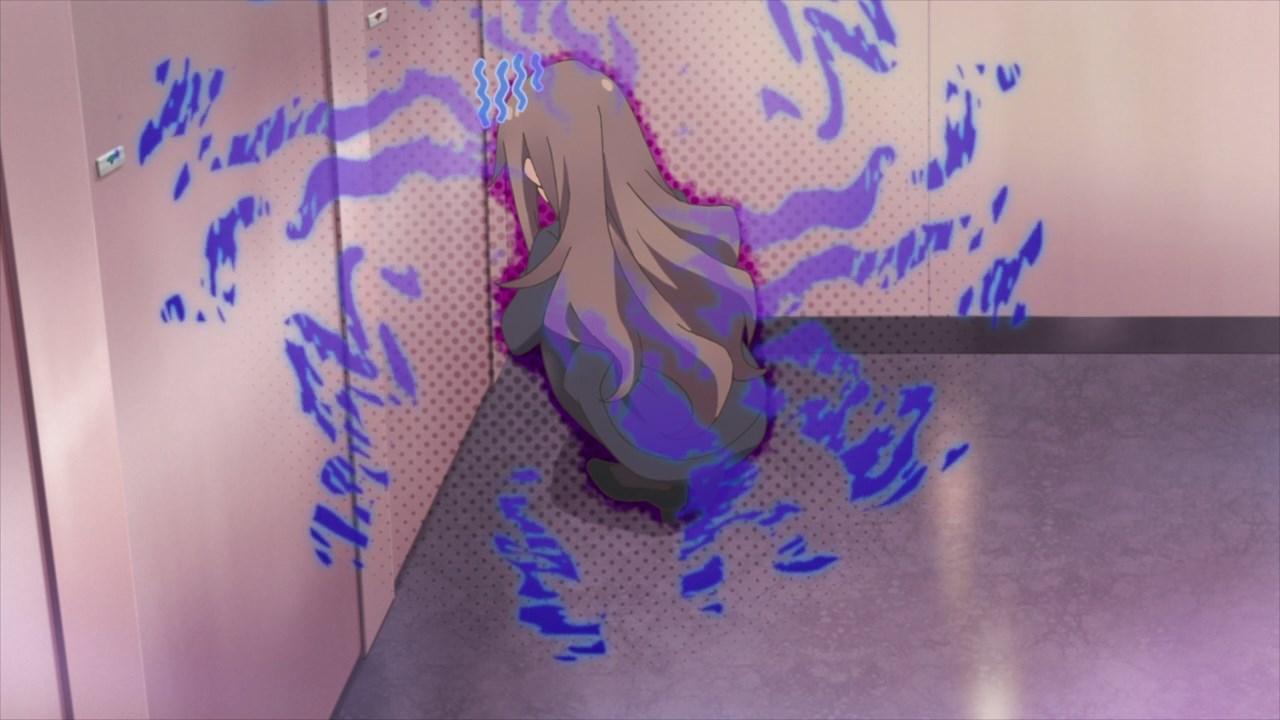 You see, Hoho Kajino is feeling depressed that the CDs they sold isn’t enough to save Nezumisou from being demolished. Um Hoho-san, you know that producing 3,000 copies and selling them is a bad idea.

Anyways, Kajino told the girls that they must sell at least 1,000 copies to save themselves from eviction. Of course, that’s not enough to keep them afloat financially. Man, I blame Kajino for buying an expensive meal for herself. 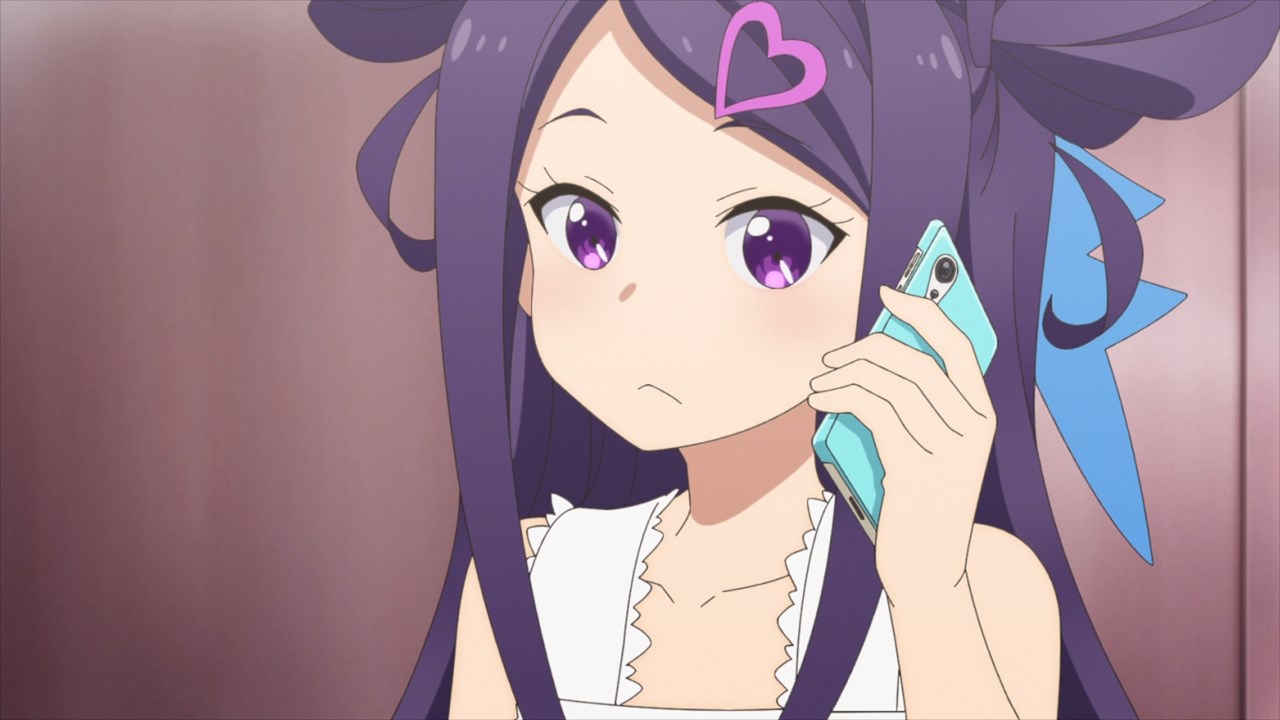 Now then, it’s time for Fruit Tart to come up a way to attract new fans so that they will buy their CDs. So, Roko Sekino called her little sister Chiko for help. 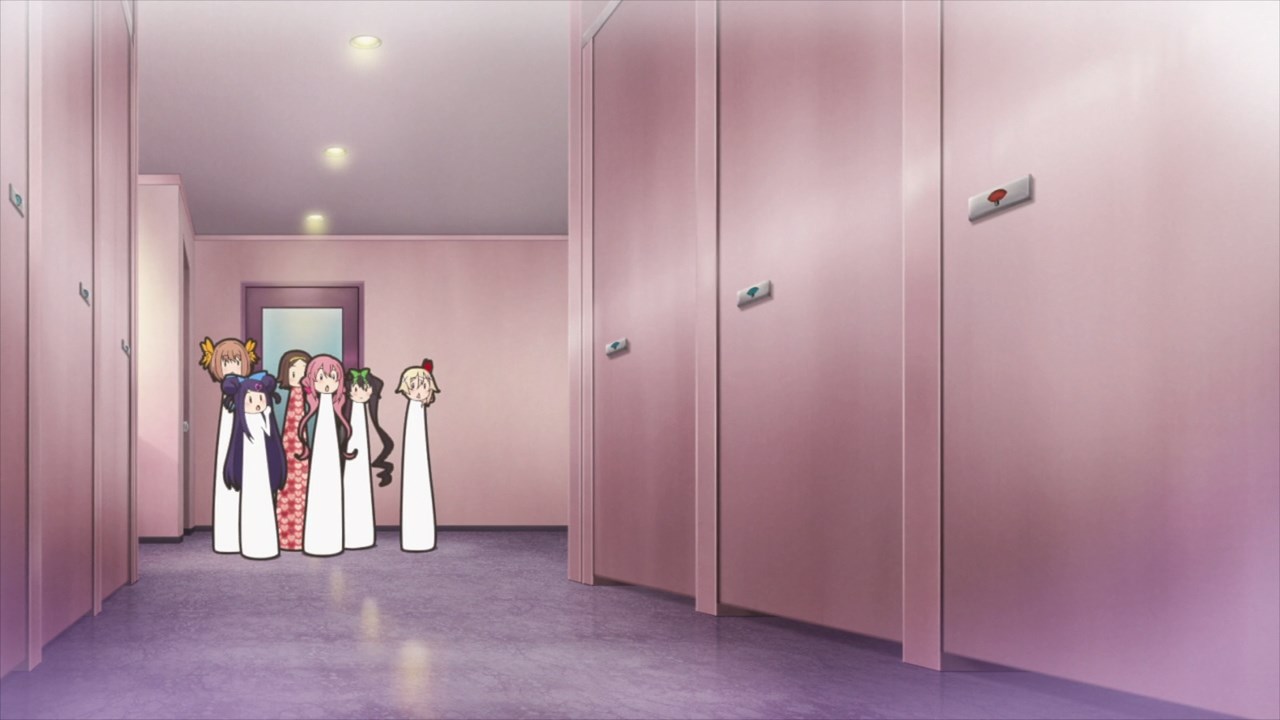 On the other hand, it appears that Chiko heard a phone ringing inside the restroom. Hmm, don’t tell me that she’s there? 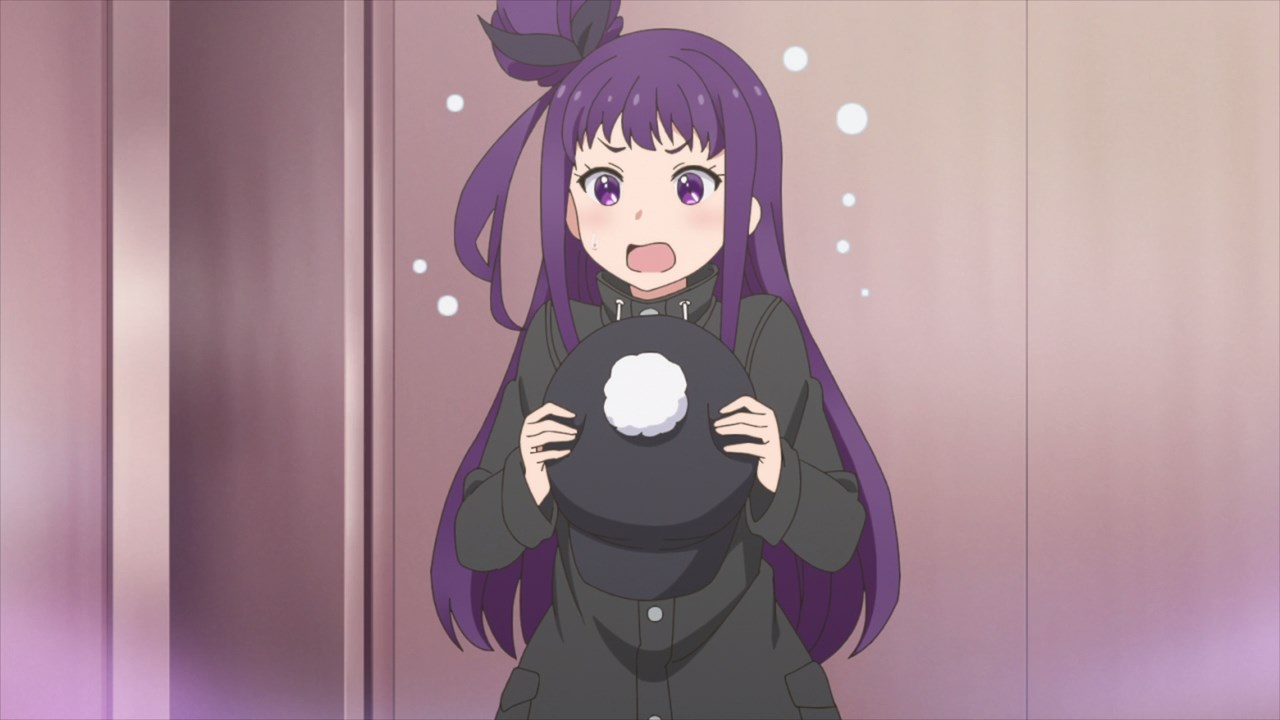 Turns out that Chiko Sekino is inside the restroom where she’s spy- I mean, secretly supporting Fruit Tart whatever she can.

Oh yeah and since Chiko is here, she told everyone to do a “call and response” to rile up the fans. Well, that only applies to Cream Anmitsu since they’re the most popular idol group in Japan. 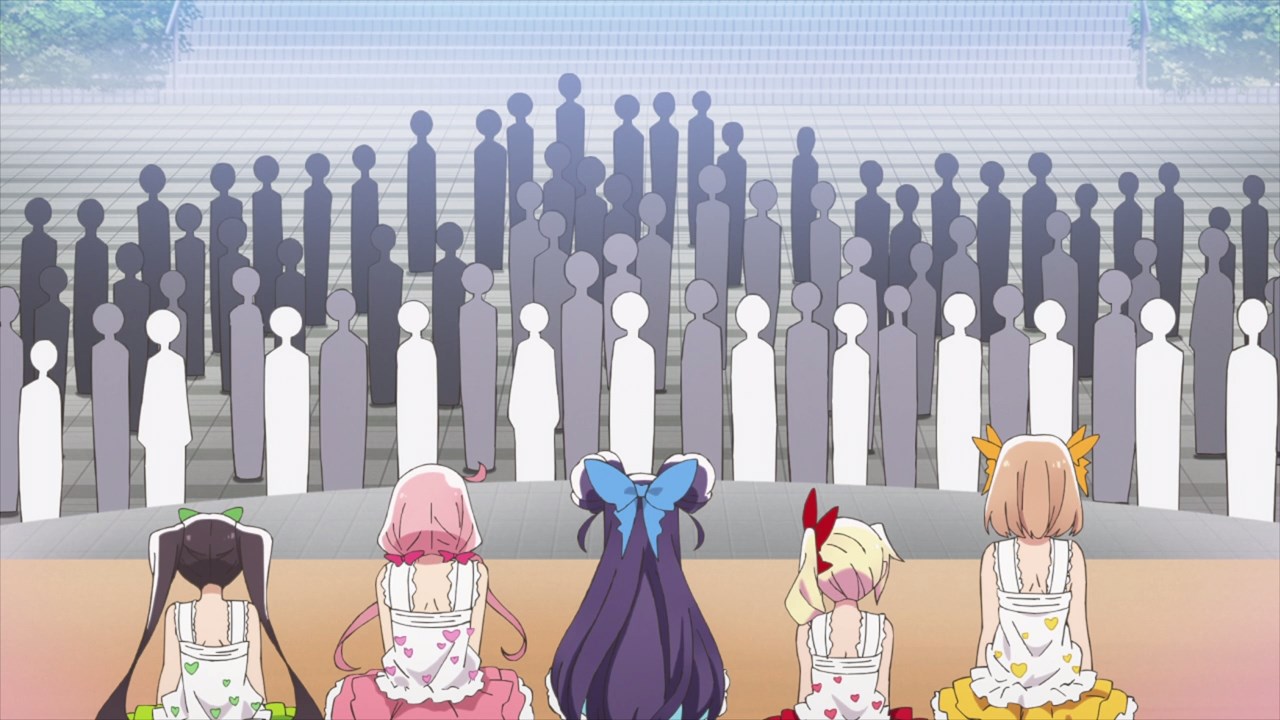 But for Fruit Tart however, they can’t do a “call and response” towards the attendees because they’re not only nervous, but Ino-chan and the rest don’t have so many friends. 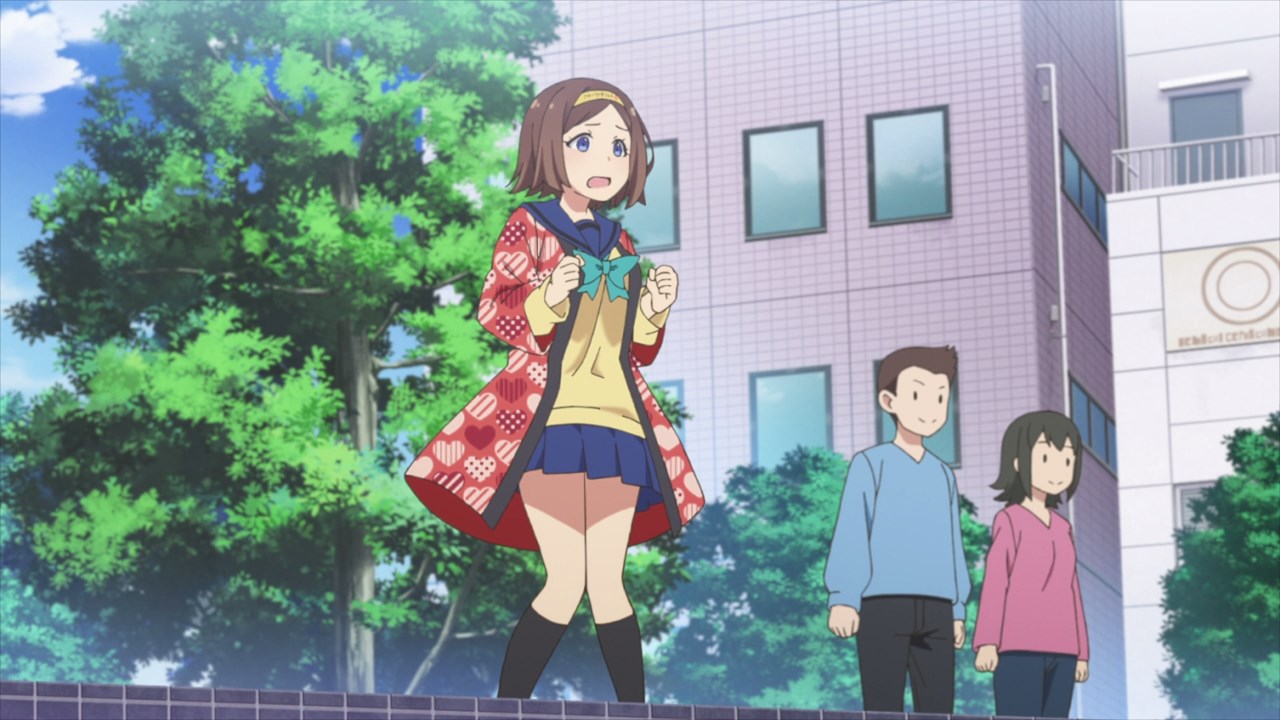 Even Tone Honmachi is worried that the afternoon session will become a trainwreck if Fruit Tart are too nervous to perform right now. 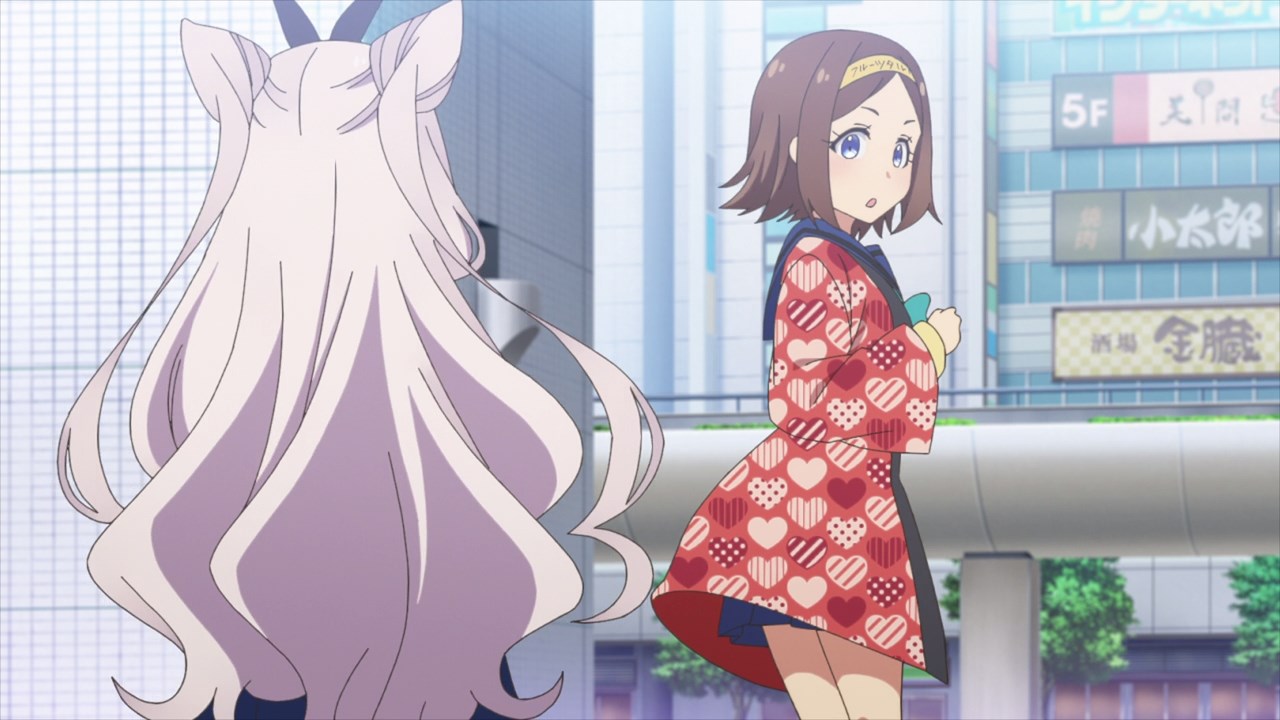 Meanwhile, looks like Tone met someone who looked like a little girl. Then again, I’m worried that Honmachi will get arrested for attempting to talk to a grade schooler. 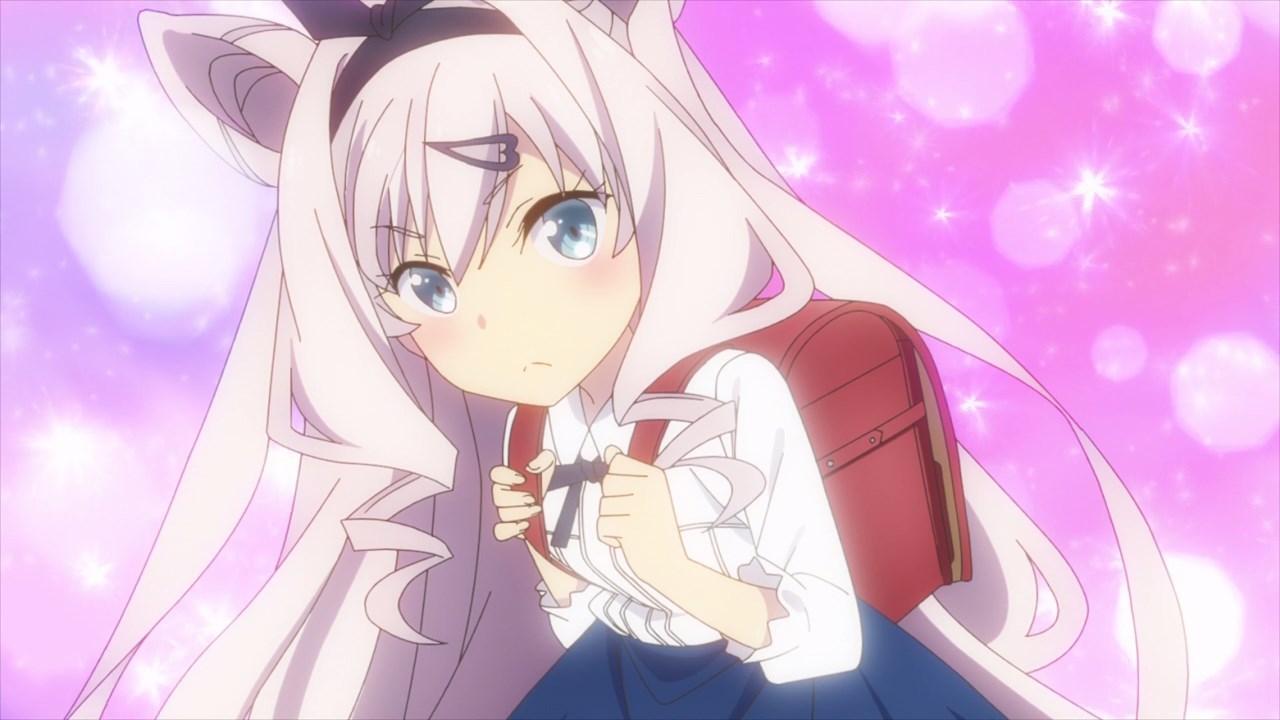 Anyways, turns out that this little girl is actually Oto Kogane where she looked like a grade schooler or possibly a kindergarten student.

Okay Ms. CEO of Cat Productions, you’re baiting everyone with your loli looks. Come to think of it, I wonder if Kogane is gonna attempt to wreck Fruit Tart during the afternoon session? 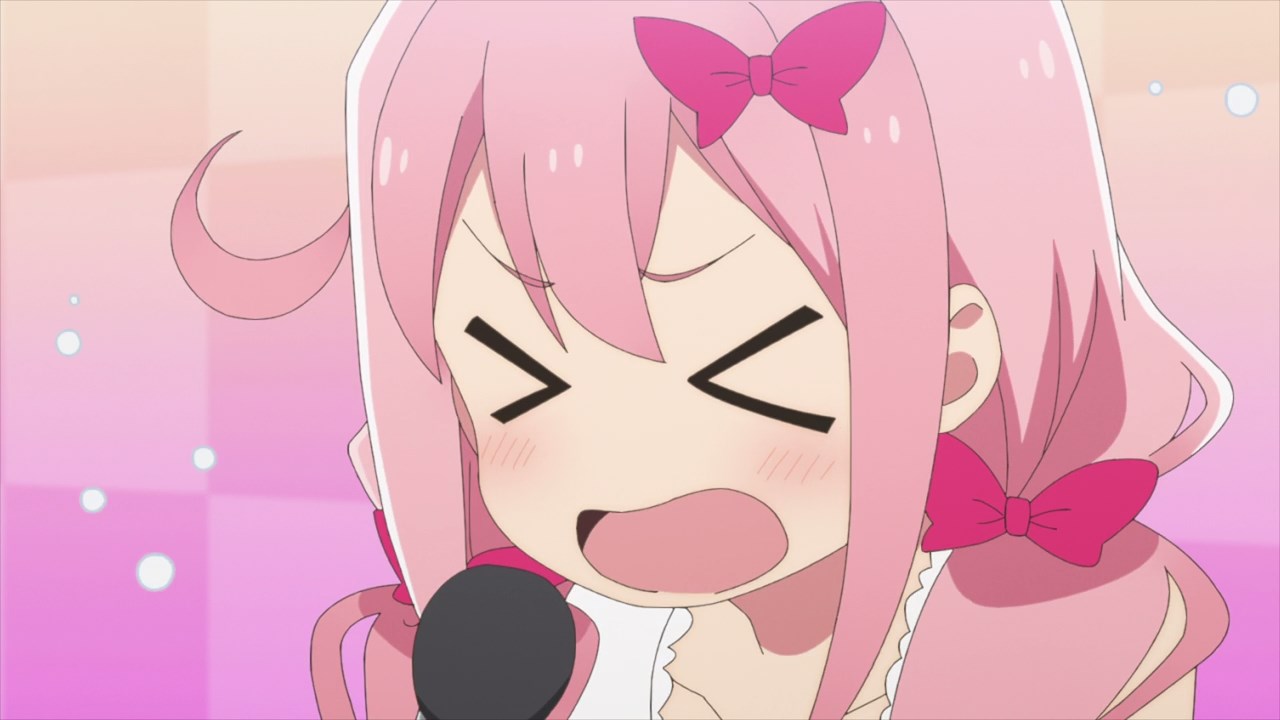 But let’s go back to Fruit Tart where Ino Sakura decides to tell the audience that they have faults such as Ino-chan having a small bladder, while the likes of Roko and Hayu are struggling artists. 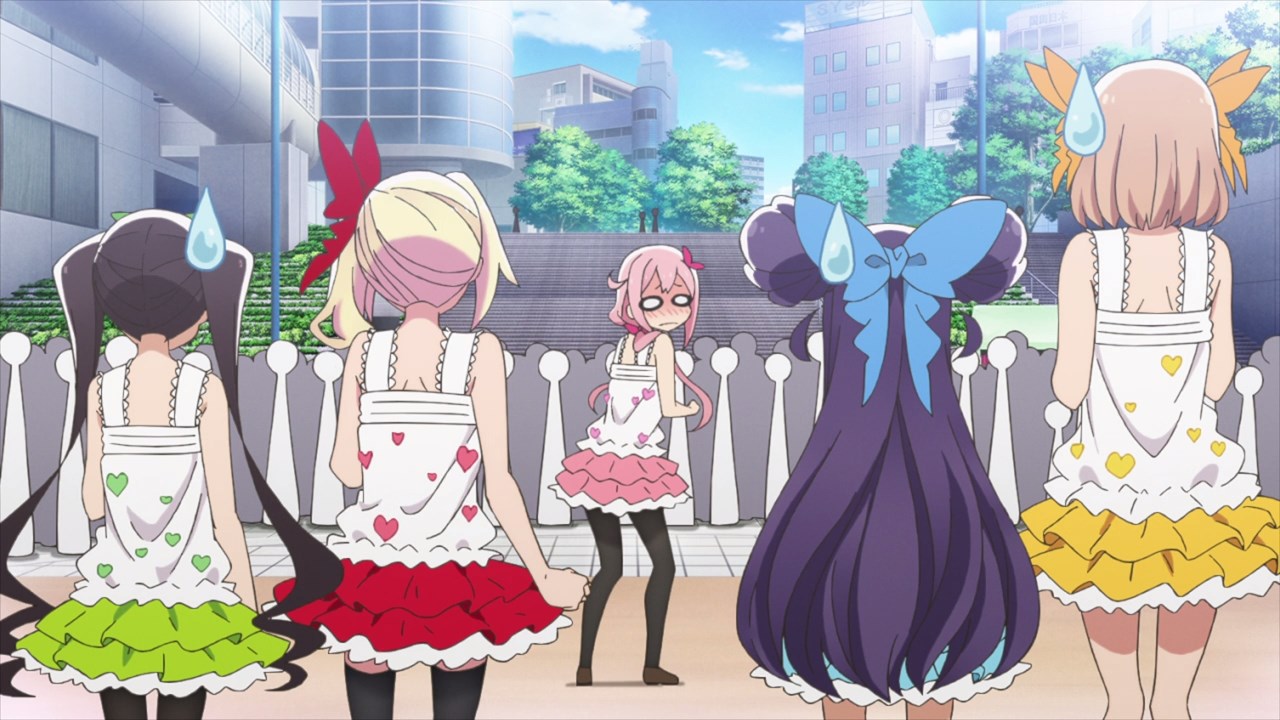 But after she said those things, Ino Sakura just froze up which makes everyone felt awkward. Even Roko Sekino called her out for making this weird speech. 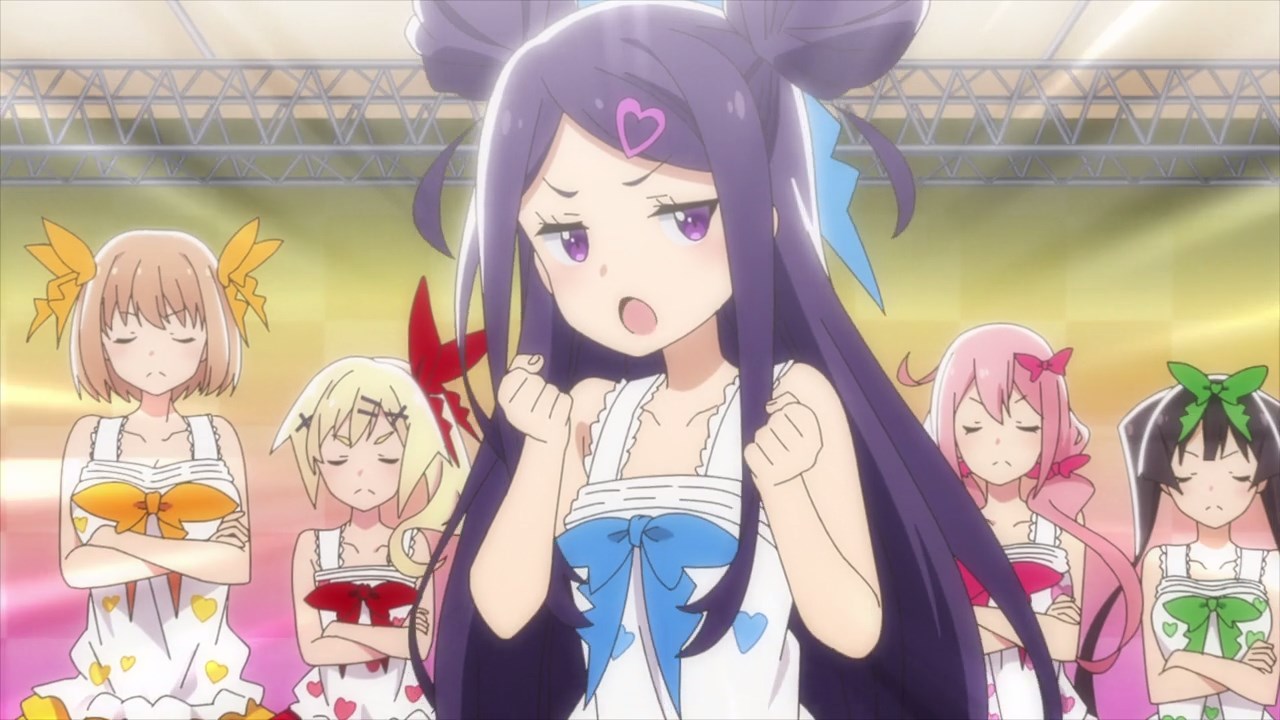 But you know what, the only way for Fruit Tart to rally up the audience is to perform a song about curry. Okay, that was a weird song they perform in this afternoon session. 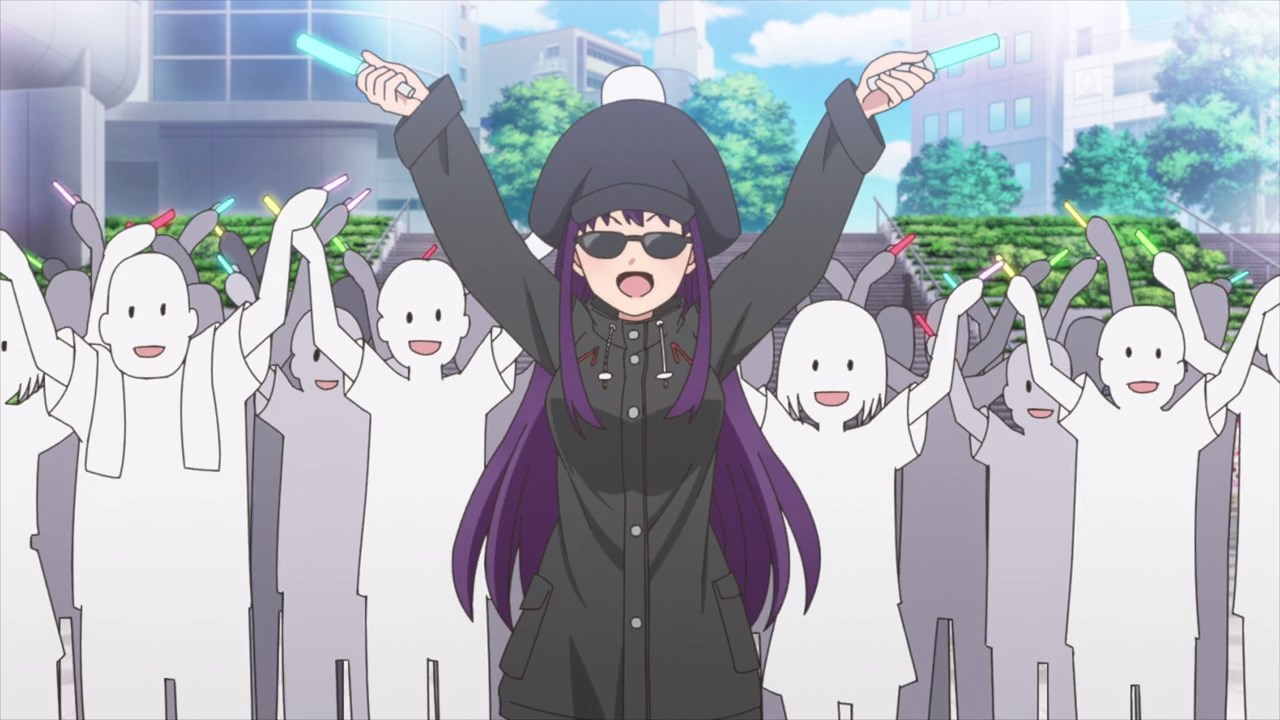 Of course, the crowd loved it as they’re mesmerized by Fruit Tart’s curry song. I have a feeling that they’re gonna eat curry later. 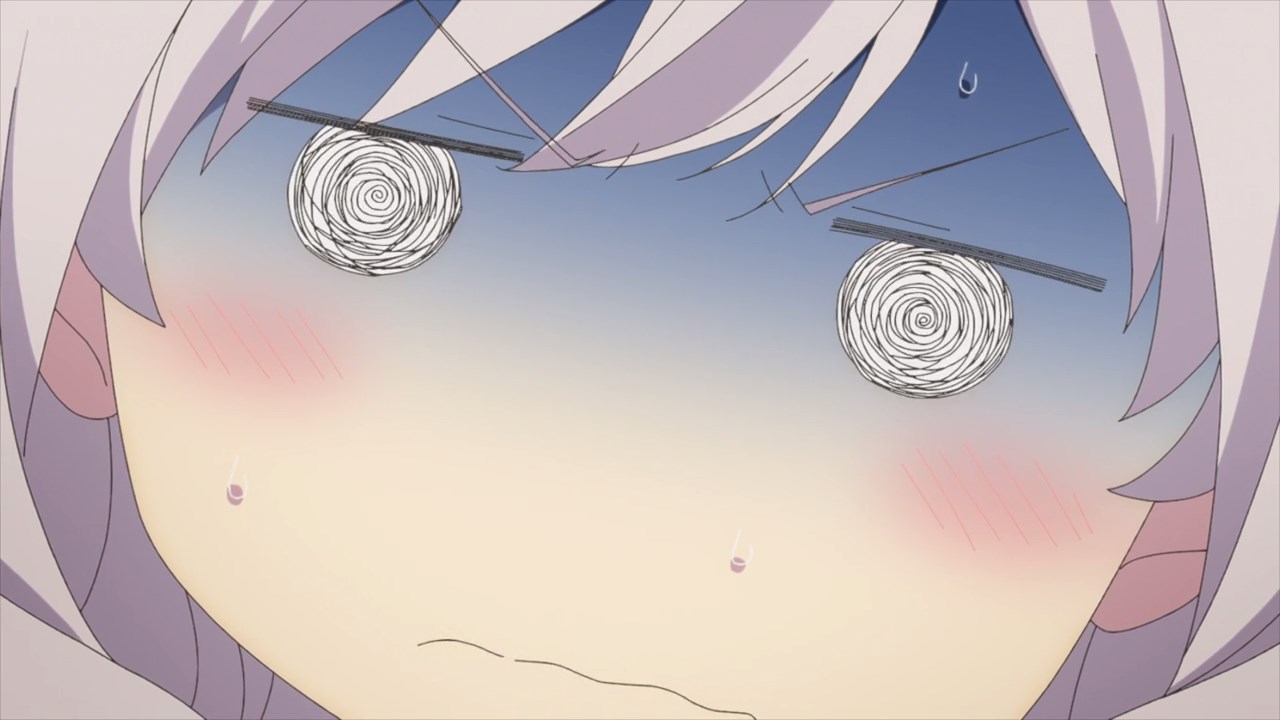 As for Oto Kogane, she got weirded out by their song that Oto walked out in disgust. Oh yeah and as for her plan to ruin Fruit Tart? Kogane plans to buy 300 copies and then dump it to the trash can or so I think.

In any case, the afternoon session was a success. Now the only thing left to do is whether Fruit Tart will break even by selling a thousand copies or more. 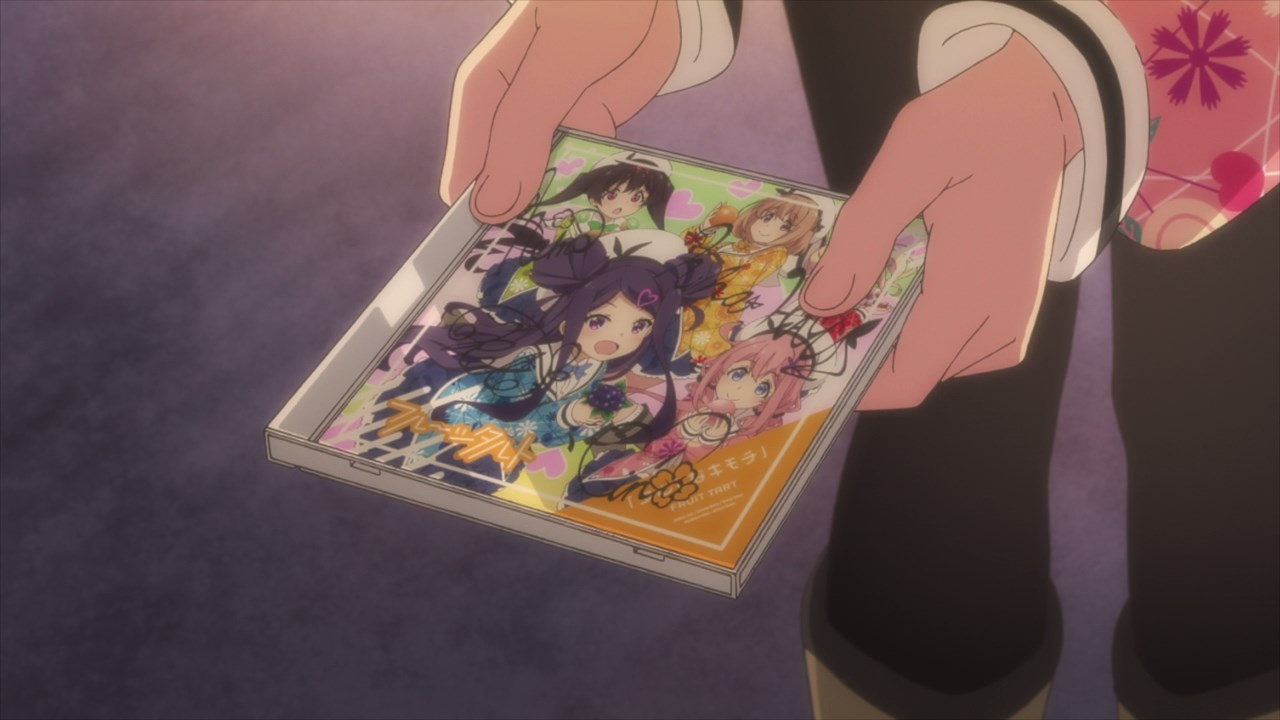 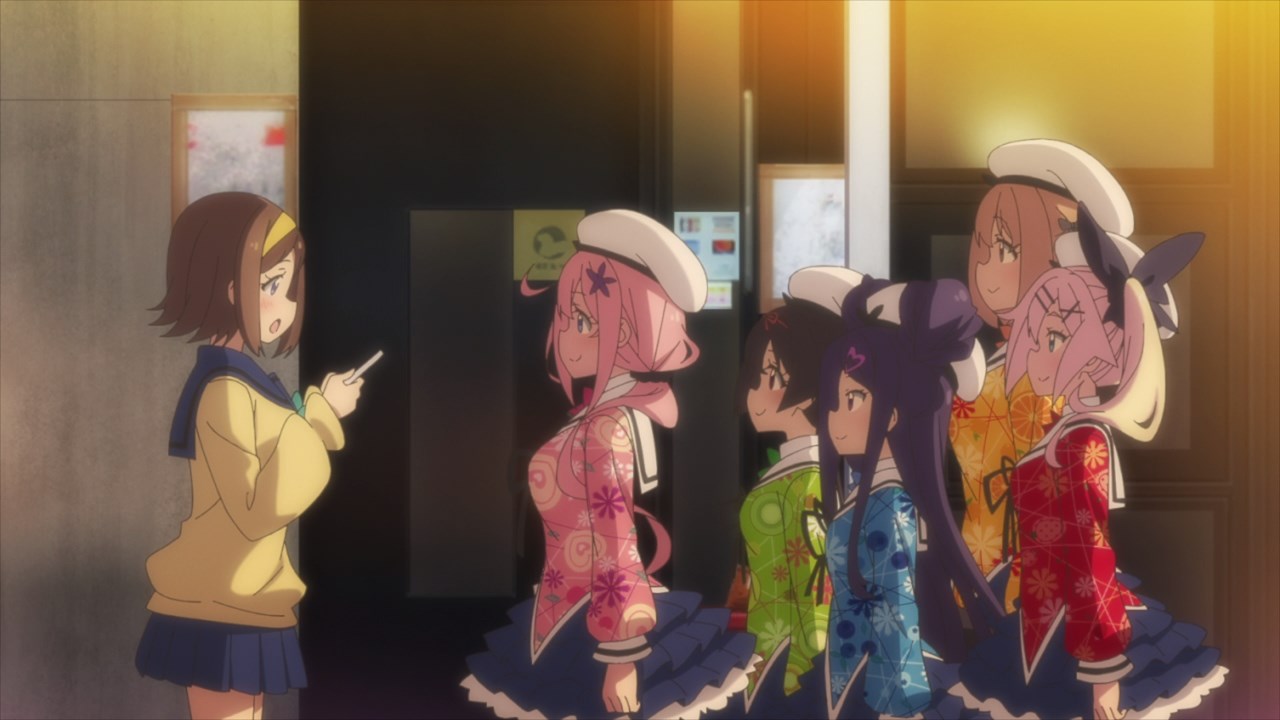 One more thing, Ino Sakura gave a signed copy of their single to Tone Honmachi as she did a great job of selling their merchandise. That’s great, but what about the future of Fruit Tart? 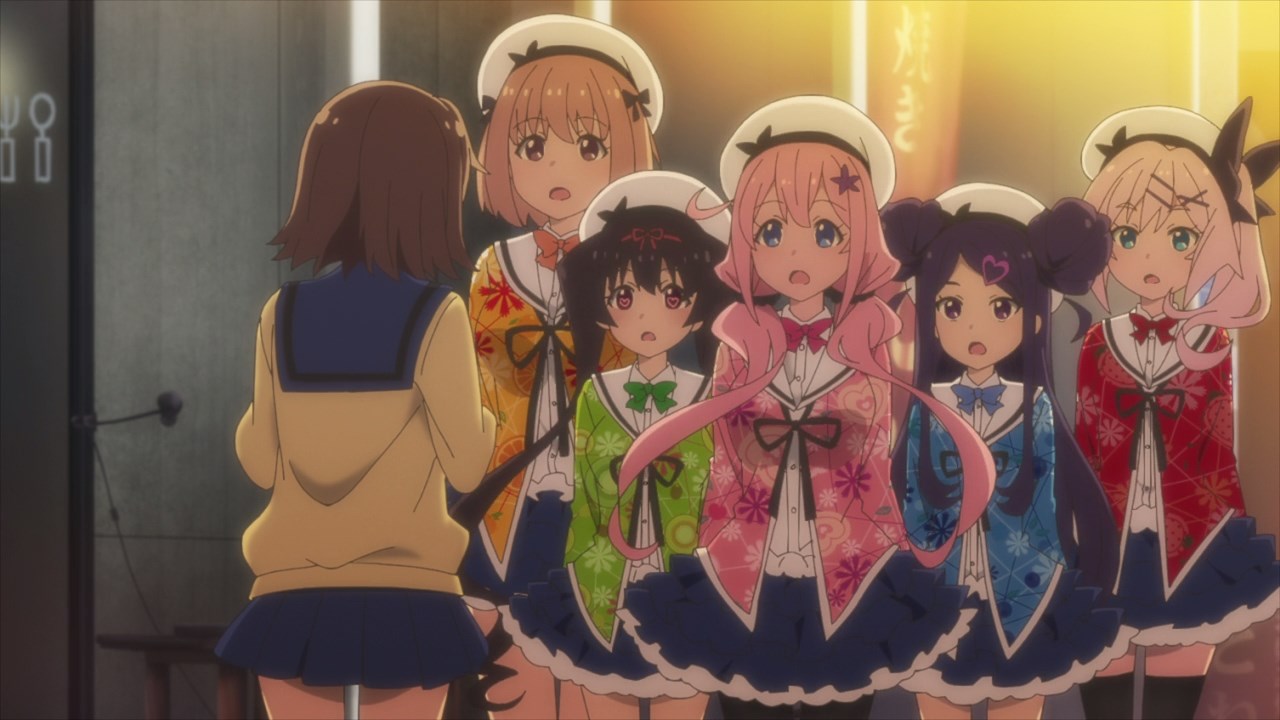 Well, there’s bad news as Rat Productions decides to cut their variety program short as they ran out of money. Goddammit, why do Ino-chan and the rest suffer like this!?

I don’t know what’s gonna happen on the next episode but man, Fruit Tart’s future is getting bleaker. I blame Hoho Kajino for incompetence!