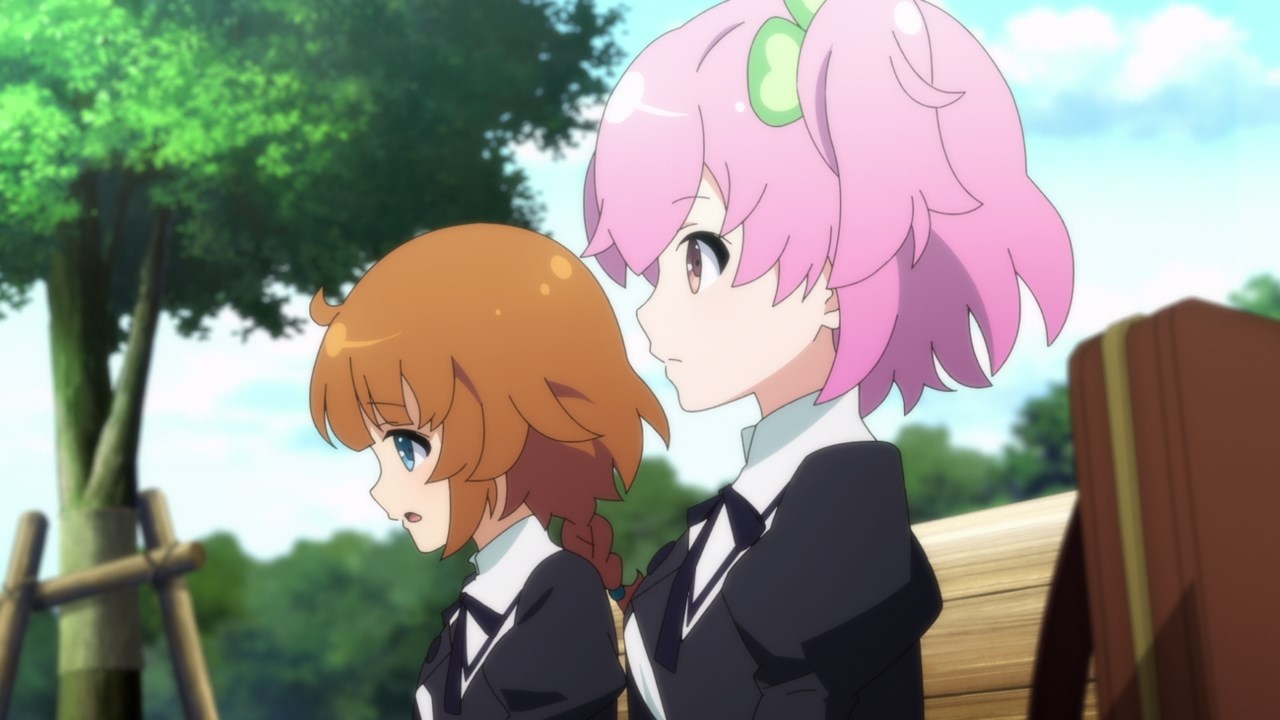 Let’s start with Fumi Futagawa where she wants to have her own Schutzengel much like how Riri Hitotsuyanagi got Yuyu Shirai. Oh Fumi, are you jealous towards Riri? 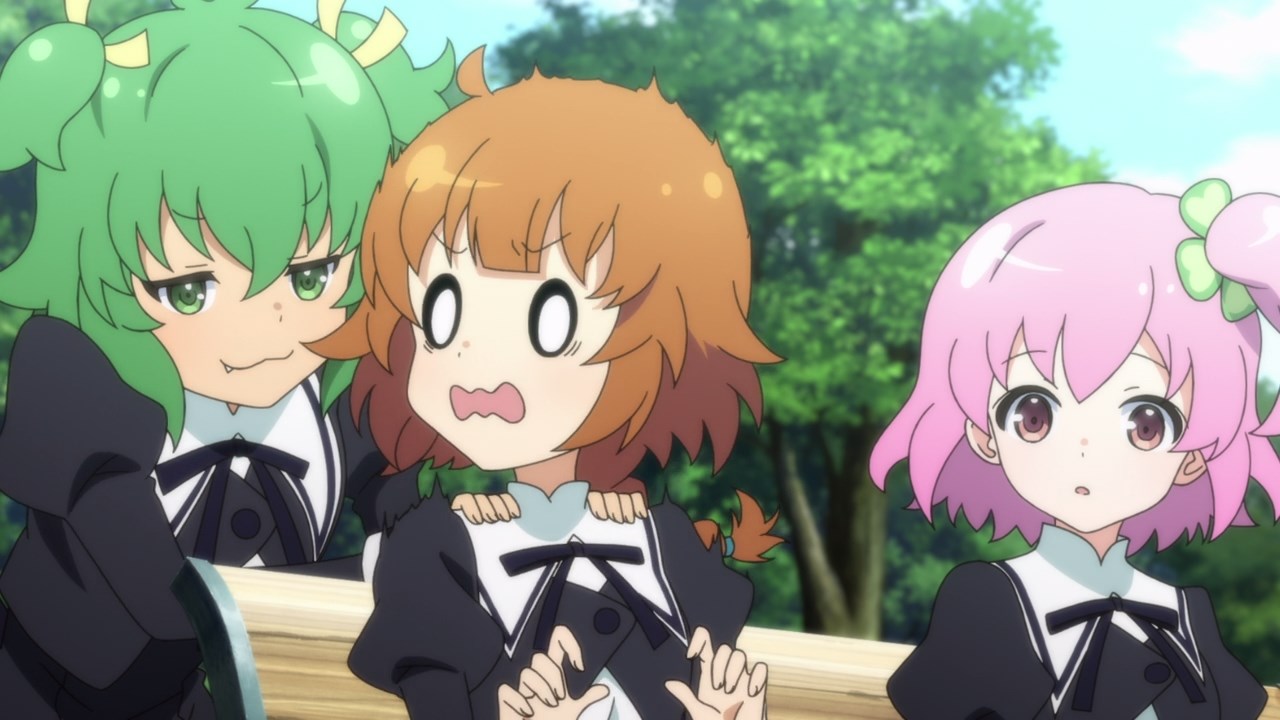 Not to worry though as Thi Mai Yoshimura decides to take Futagawa as her Schild. Glad that Fumi got her Schutzengel very quick on this penultimate episode. 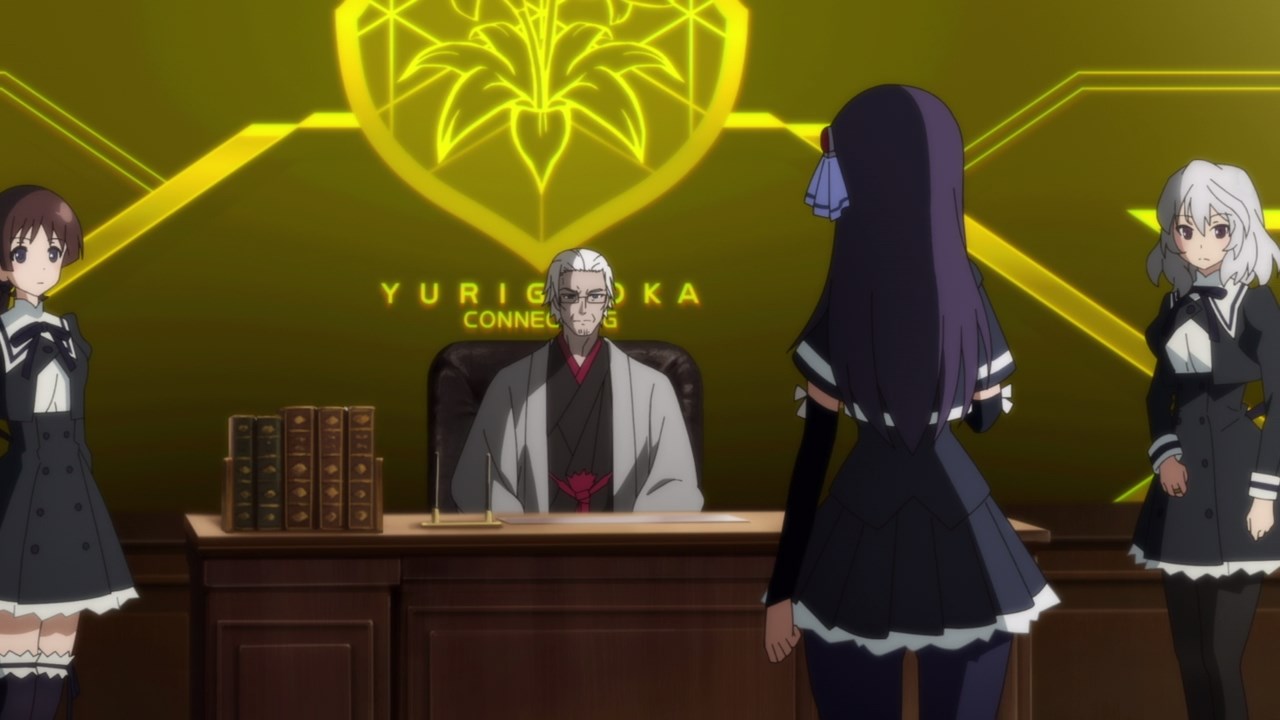 Meanwhile, let’s talk about Yuyu Shirai’s Dáinsleif where Moyu Mashima found new developments in regards to the CHARM. Turns out that it wasn’t the HUGE who made alterations, but rather Misuzu Kawazoe.

Furthermore, Moyu found more interesting information about Misuzu as she possesses the Rare Skill Charisma, albeit in its evolved form Laplace where it’s believed that it can alter memories or possibly influence the HUGE to make them stronger. 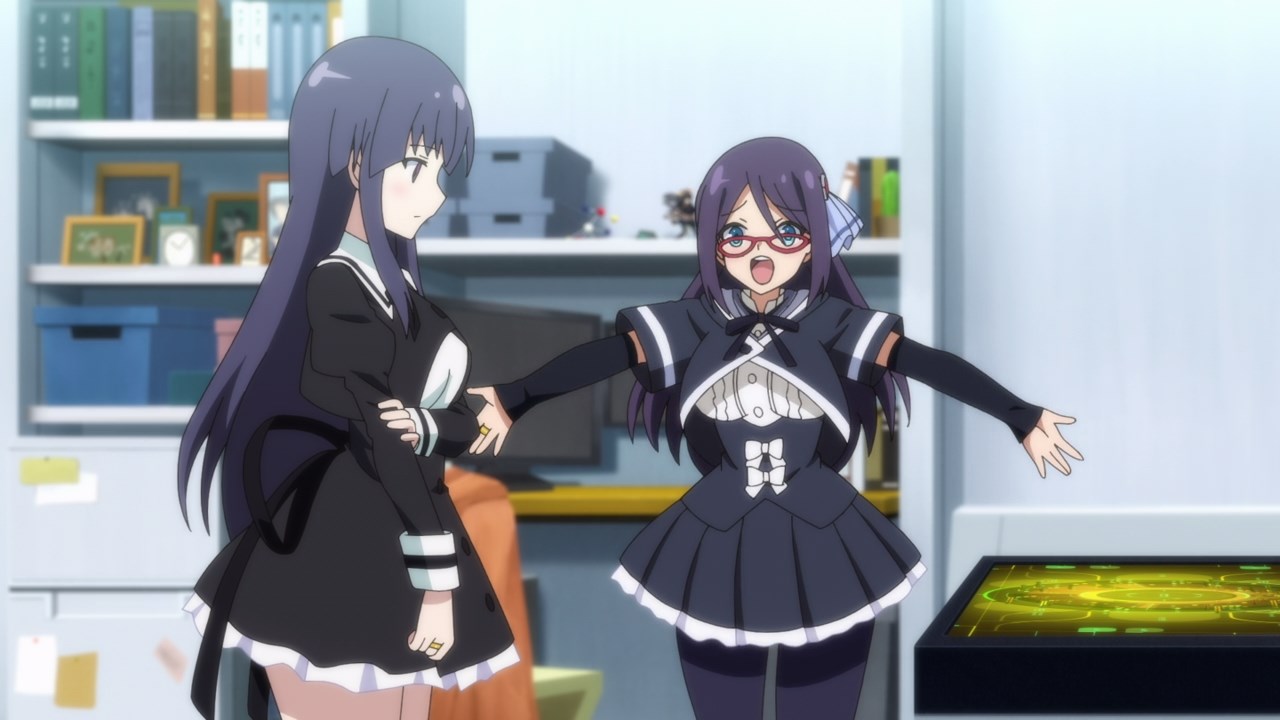 Then again, the only way to find answers about Misuzu Kawazoe is to ask Yuyu Shirai as Moyu Mashima invited Yuyu to her room and ask questions about the time she spent with Misuzu, including the Battle of Koshu where Kawazoe lost her life. 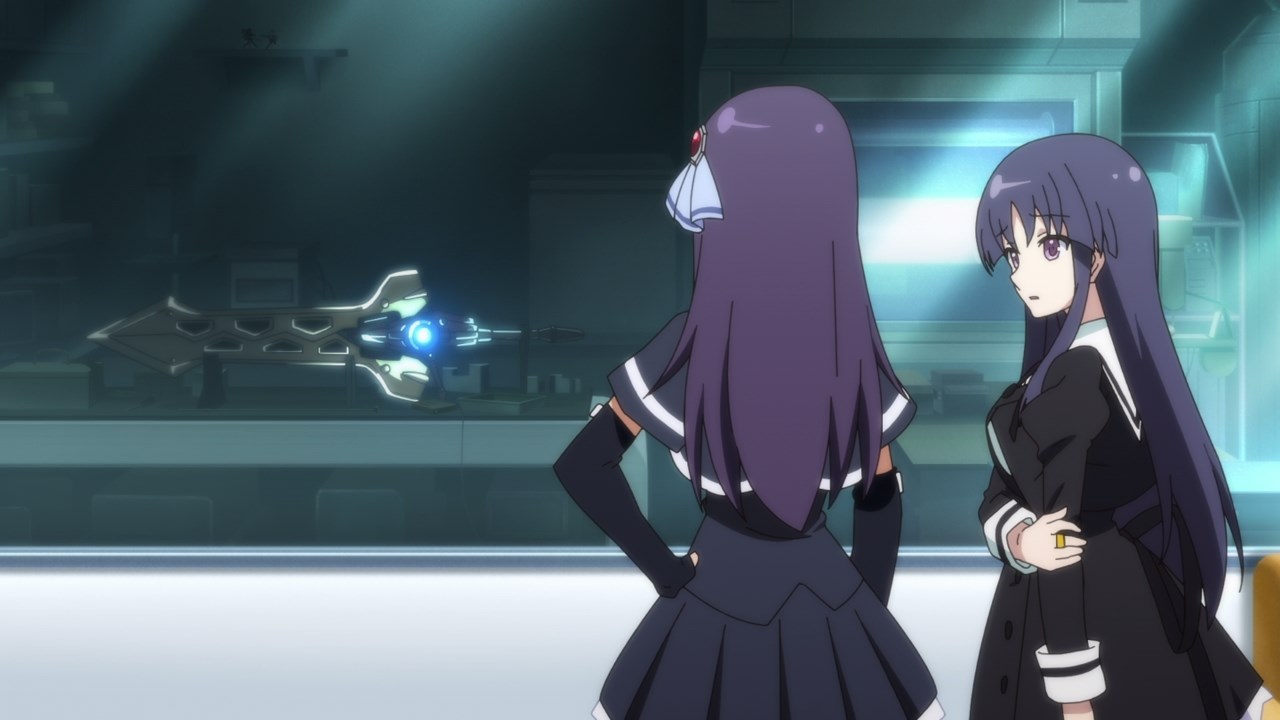 Unfortunately for Yuyu, the only memory she have is the time when Shirai saw her Schutzengel died on that day. Yeah, Yuyu only has bad memories in regards to Misuzu. 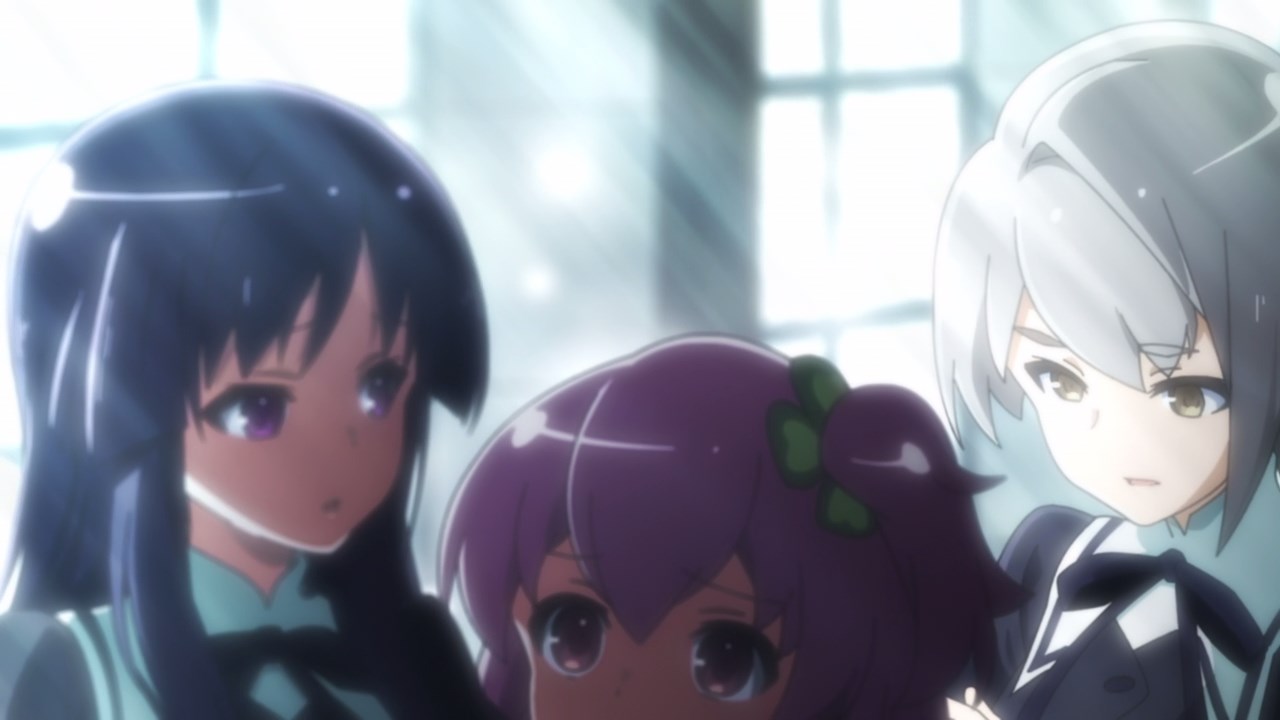 And speaking of Misuzu Kawazoe, it appears that Yuyu Shirai saw her ghost as Misuzu is trying to haunt Riri Hitotsuyanagi. Man, looks like her trauma has gotten worse. 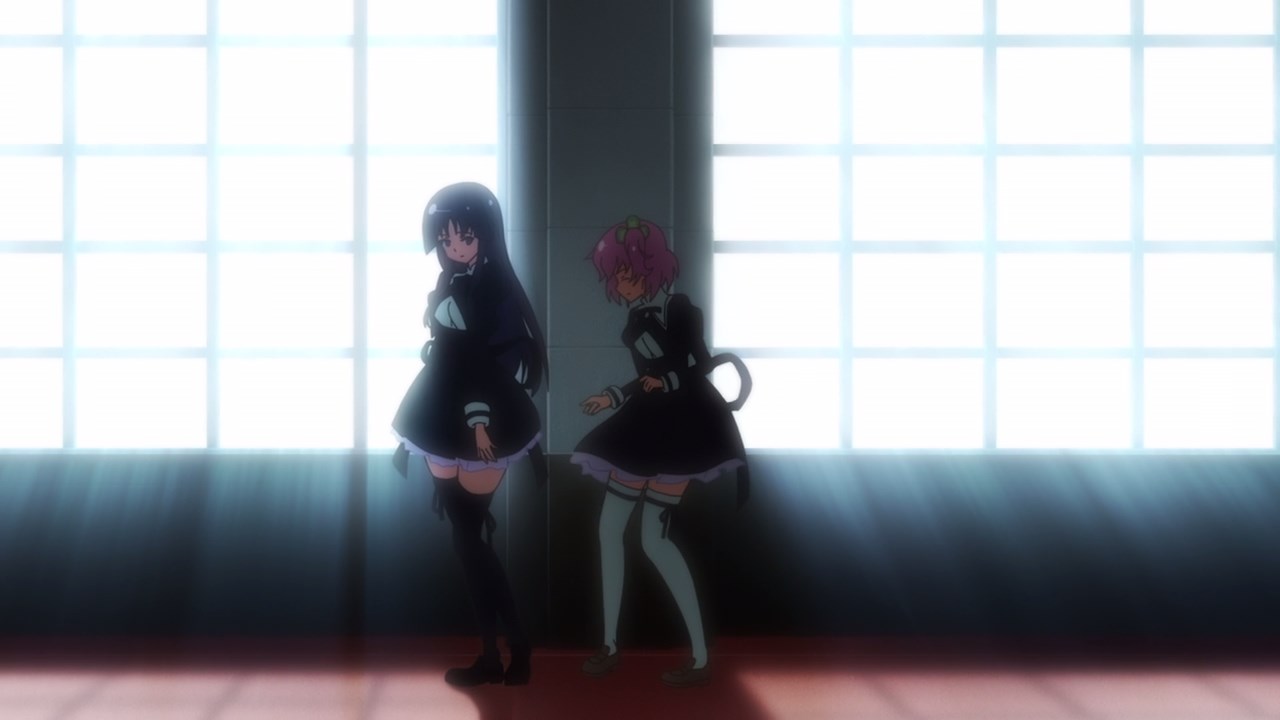 Anyways, Yuyu told Riri to stay away from her as she’s being haunted by her former Schutzengel.

You know something, Shirai being tied to her trauma won’t do any favors towards the present, especially Hitotsuyanagi where she puts her trust towards Shirai. 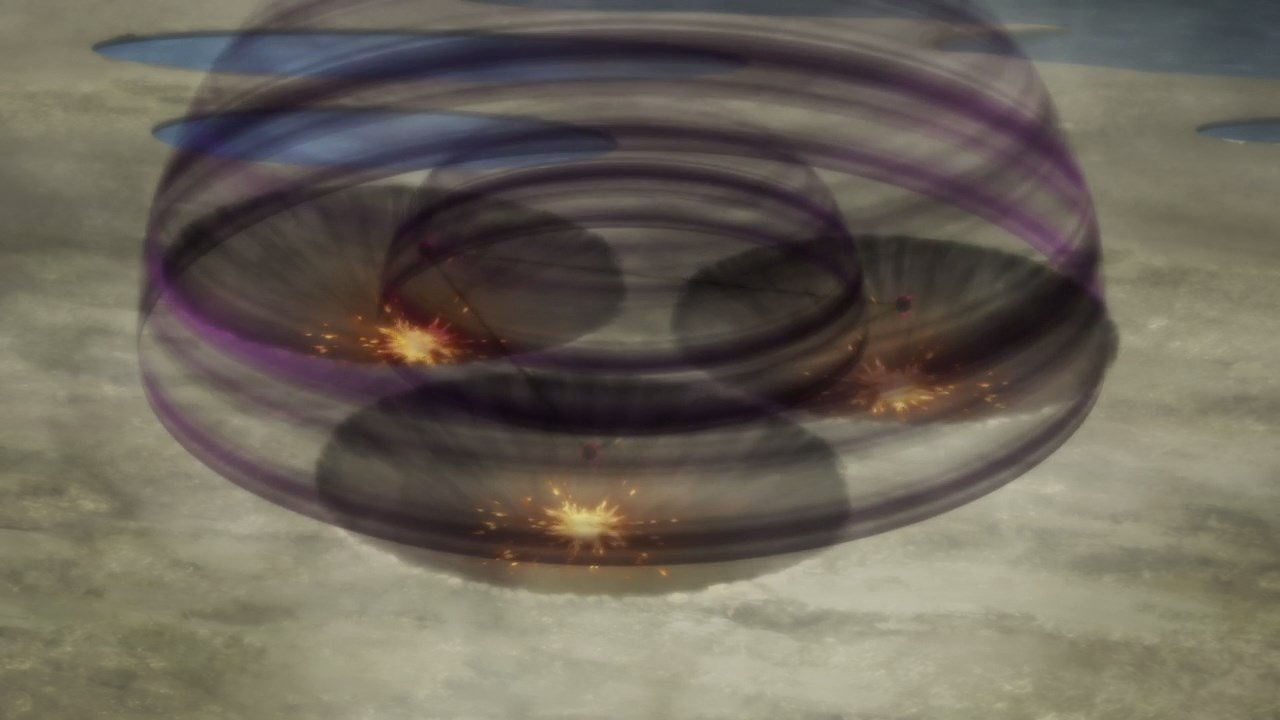 Meanwhile, it appears that 3 objects fell down near Yurigaoka Girls’ Academy where it emits an ominous aura. 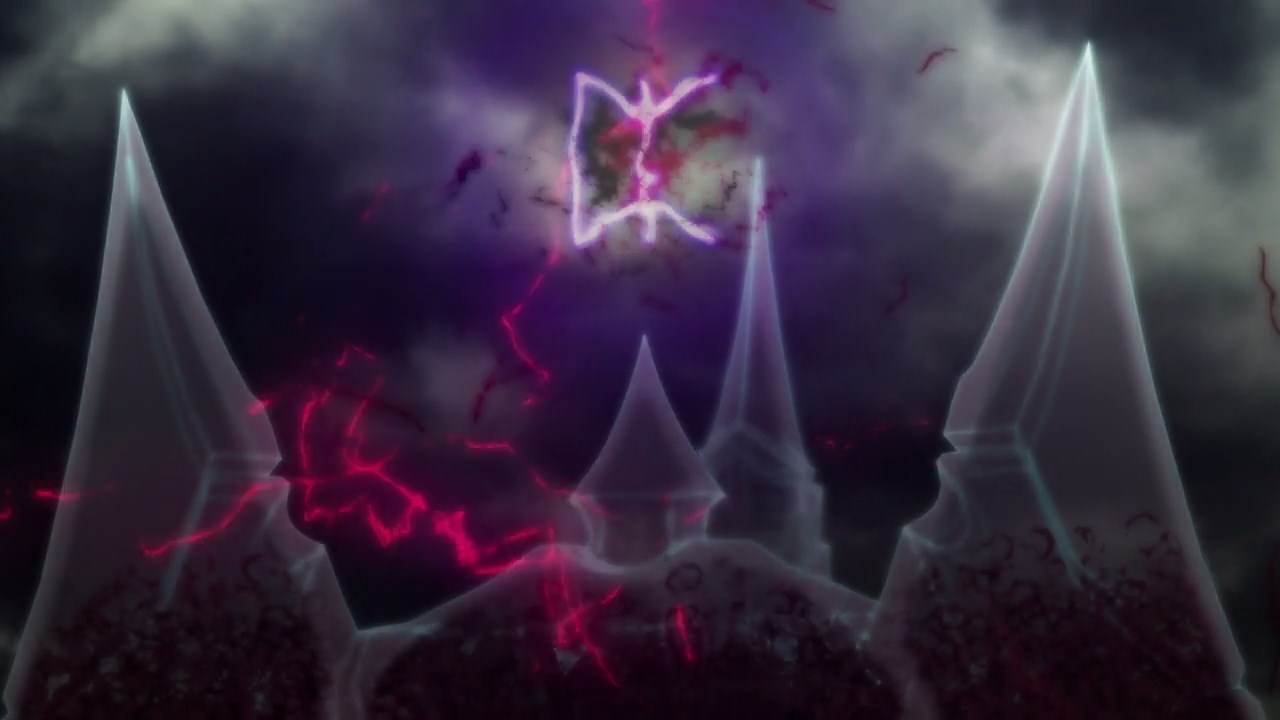 Not only that, but it creates this rune in which it stops the flow of Magie, meaning that Lilies can’t use their CHARM and therefore they have to flee towards a safe place.

You know something, I think these object who fell from the sky are actually HUGEs in which the enemy decides to make the Lilies even more vulnerable by removing Magie from their weapons. Come to think of it, I wonder if the HUGE are actually aliens? 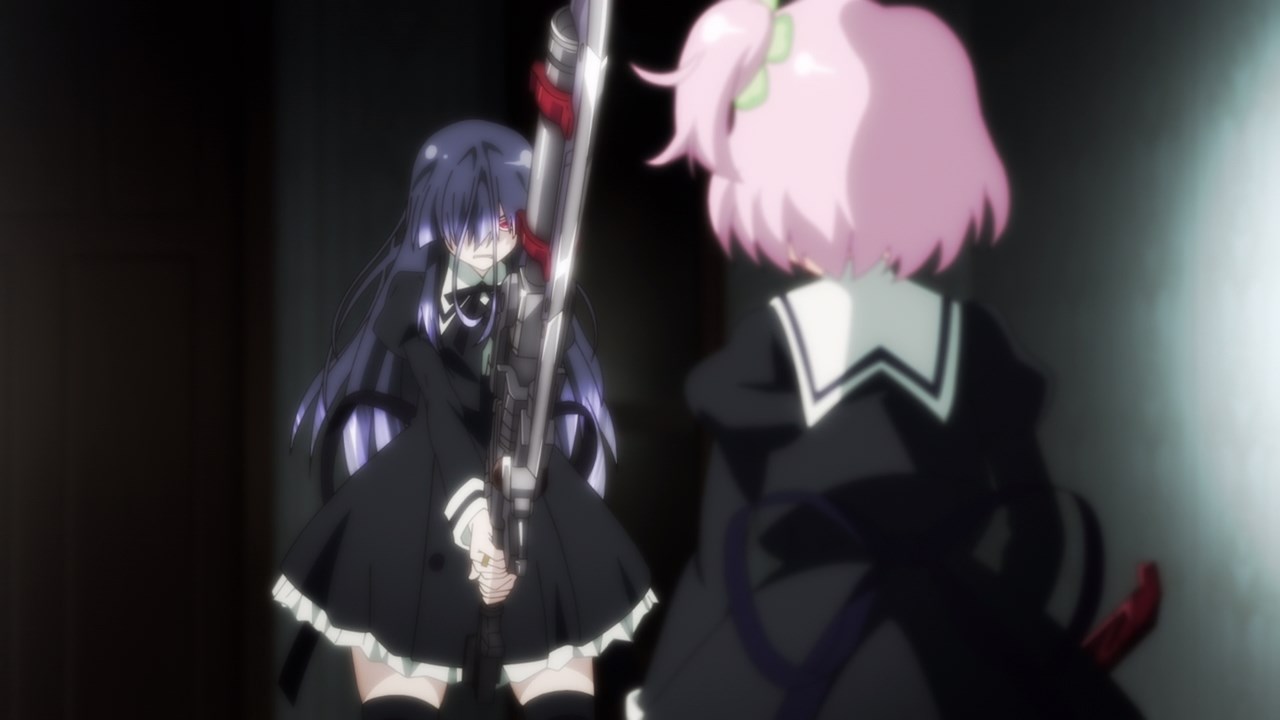 Now then, here’s Yuyu Shirai where she decides to stay inside Yurigaoka Girls’ Academy as she’s still being haunted by Misuzu Kawazoe’s soul.

Oh yeah, and she’s getting closer on activating Lunatic Trancer where Yuyu is about to murder Riri in cold blood. 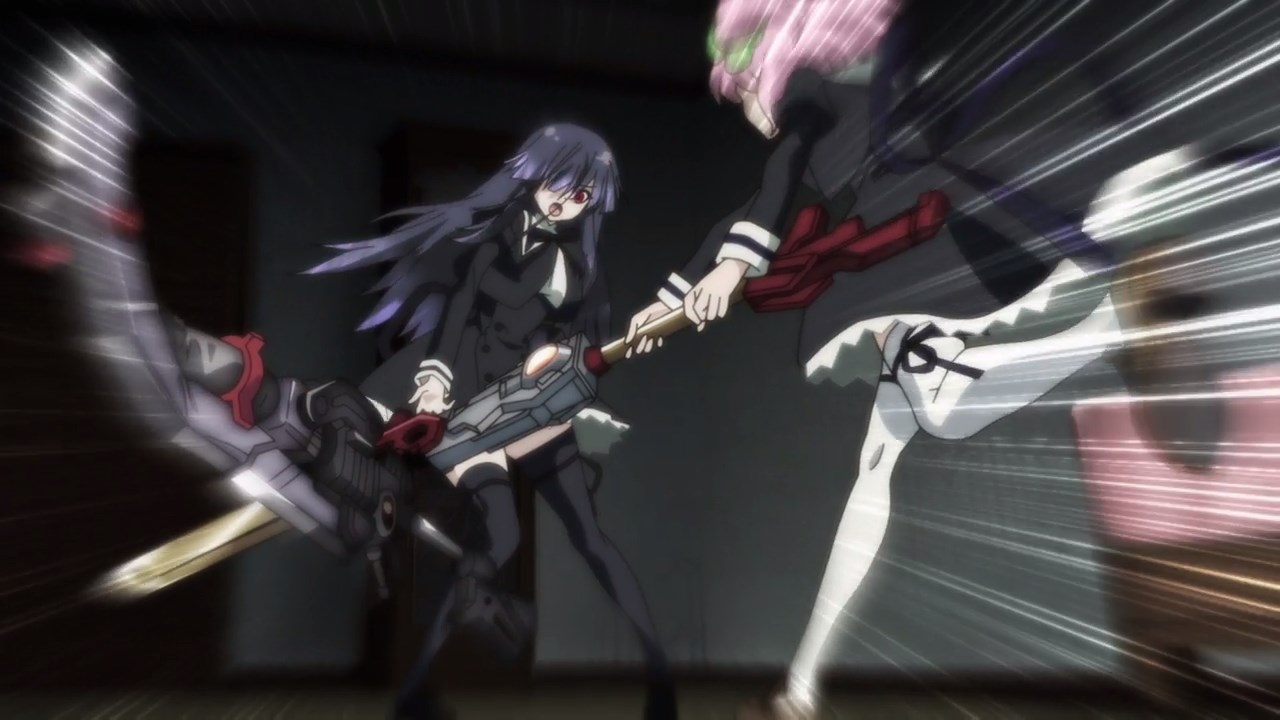 That’s until Riri Hitotsuyanagi managed to parry Yuyu Shirai’s attacks in which Yuyu’s CHARM got destroyed as it ran out of Magie. 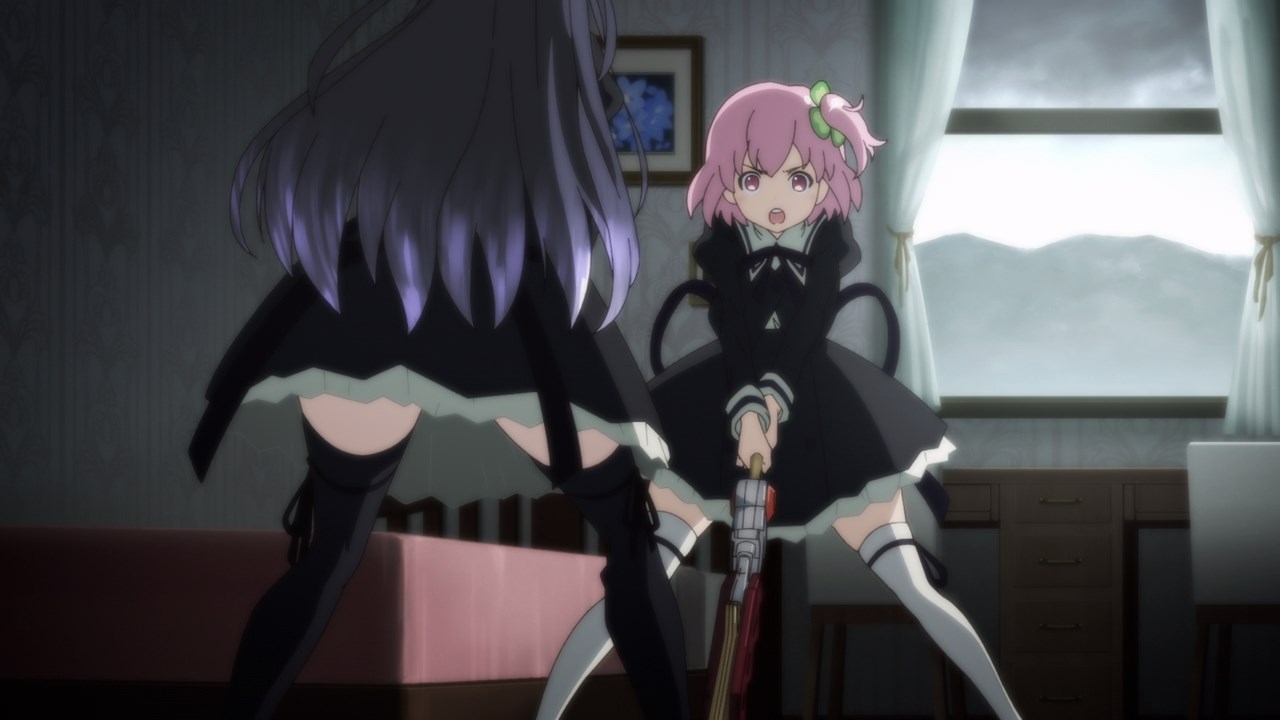 In any case, Riri Hitotsuyanagi told Yuyu Shirai to get out of the academy as she wants her Schutzengel to live. Then again, I wonder what’s gonna happen to Riri once she rescued Yuyu-sempai from being killed by a HUGE? 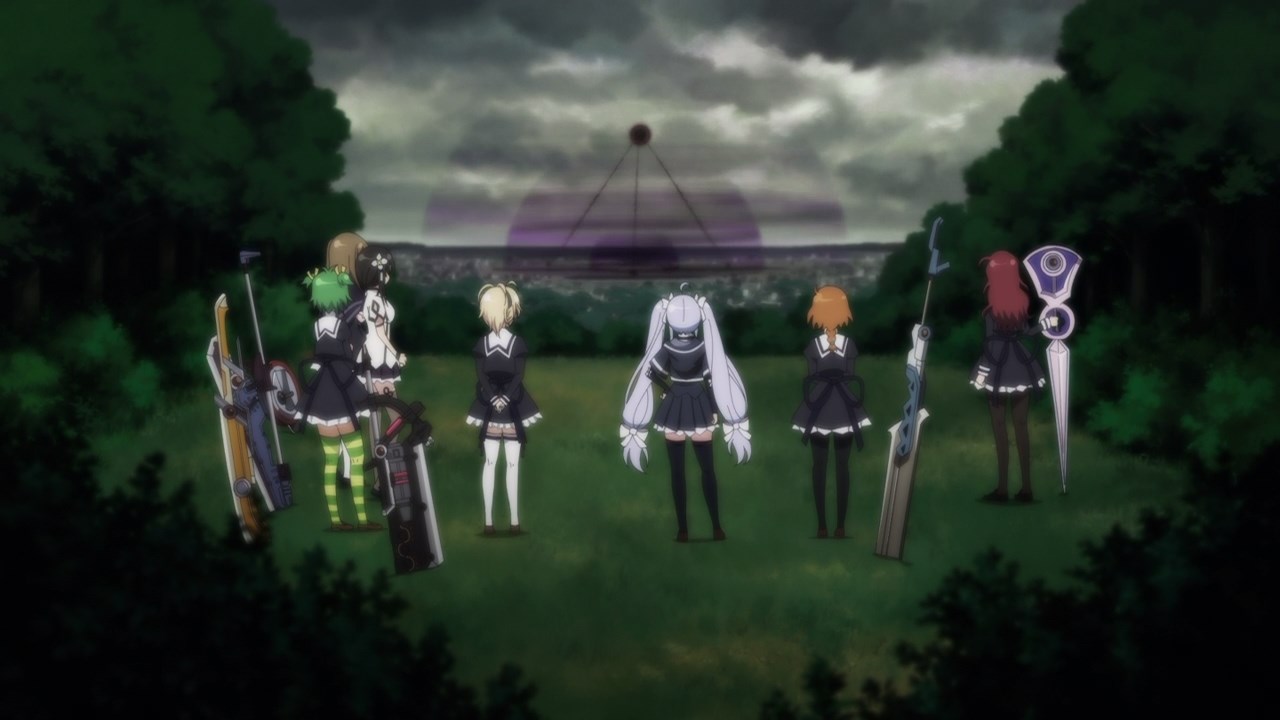 And so, I’ll end this episode where the students of Yurigaoka Girls’ Academy can’t do anything but watch the disaster unfolds within the town. After all, they can’t use their CHARMs right now. 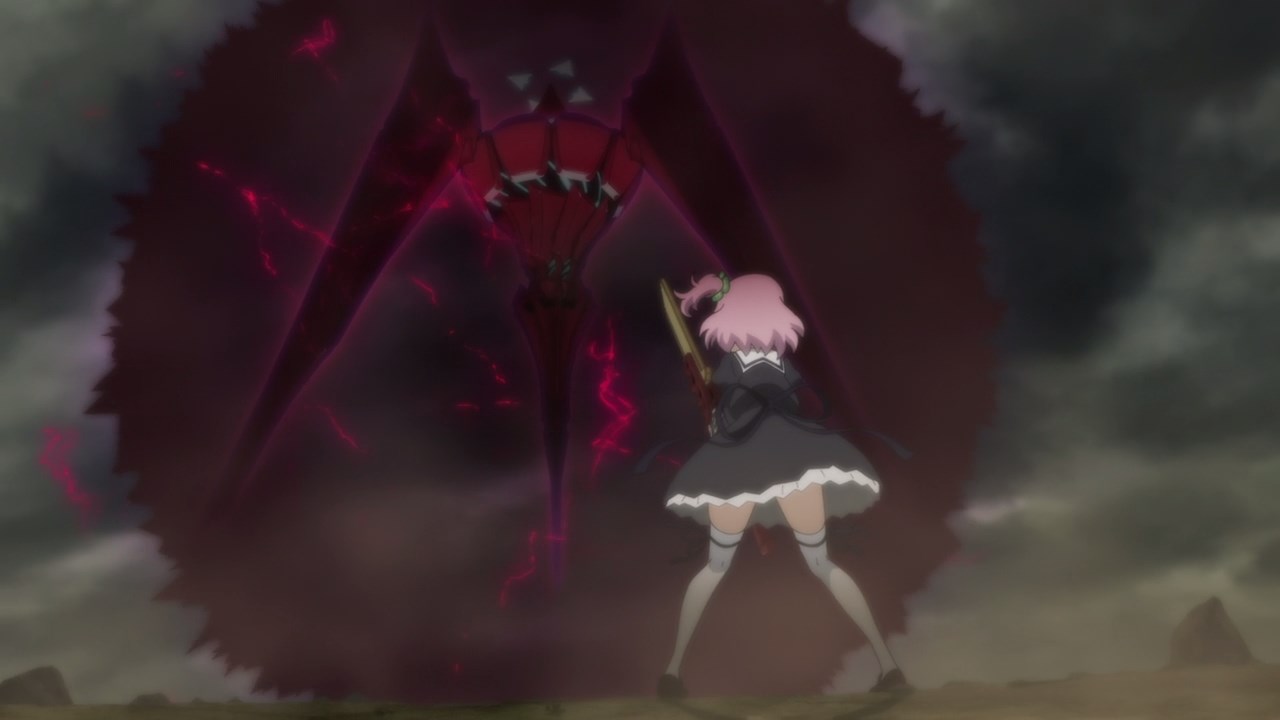 However, it appears that Riri’s CHARM is still working as she’s gonna take on that HUGE by herself. Okay, I’m scared that Riri Hitotsuyanagi might pull the same stunt as Madoka Kaname.

Oh yeah and the reason why Riri’s CHARM is still working is because of Misuzu Kawazoe’s influence. Remember the rune that was shown earlier? That belonged to Misuzu where it’s tied to her CHARM Dáinsleif. Gotta say that Kawazoe is actually the main villain of this story.

In any case, let’s hope that there won’t be any tragedies on the final episode!