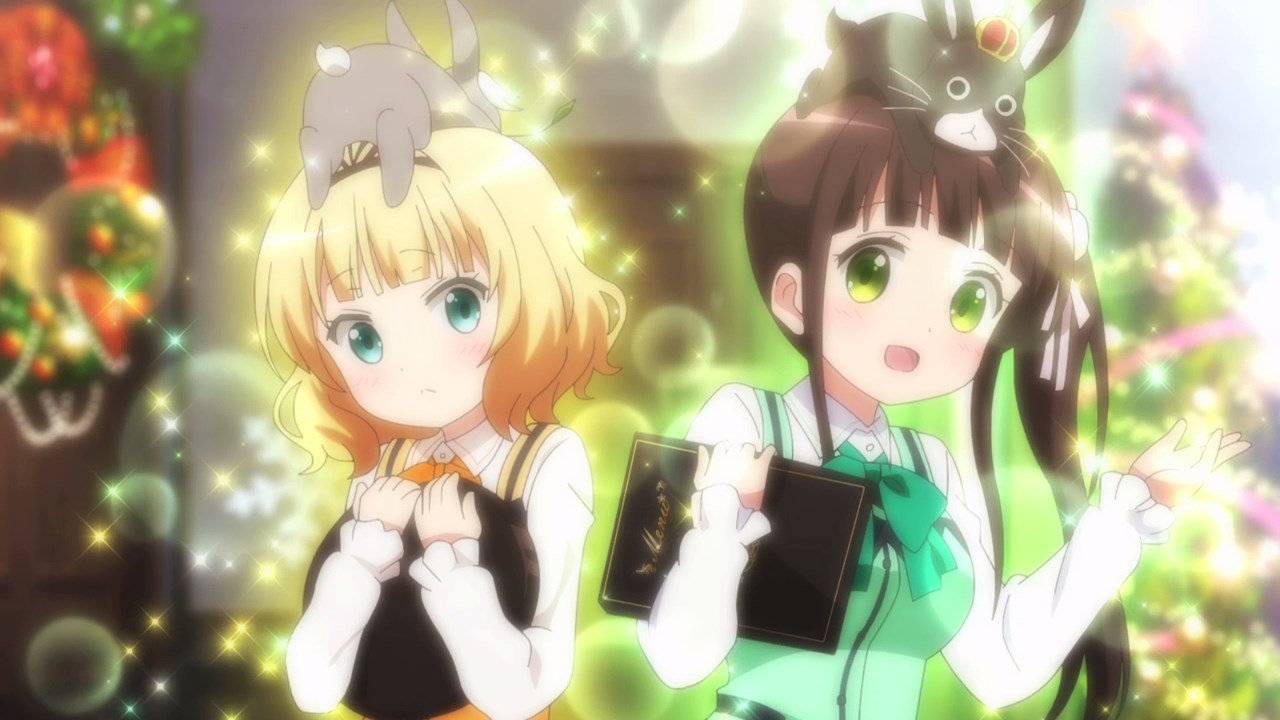 Well everyone, here’s both Sharo Kirima and Chiya Ujimatsu as they’re all suited-up and ready to serve the customers at Rabbit House. 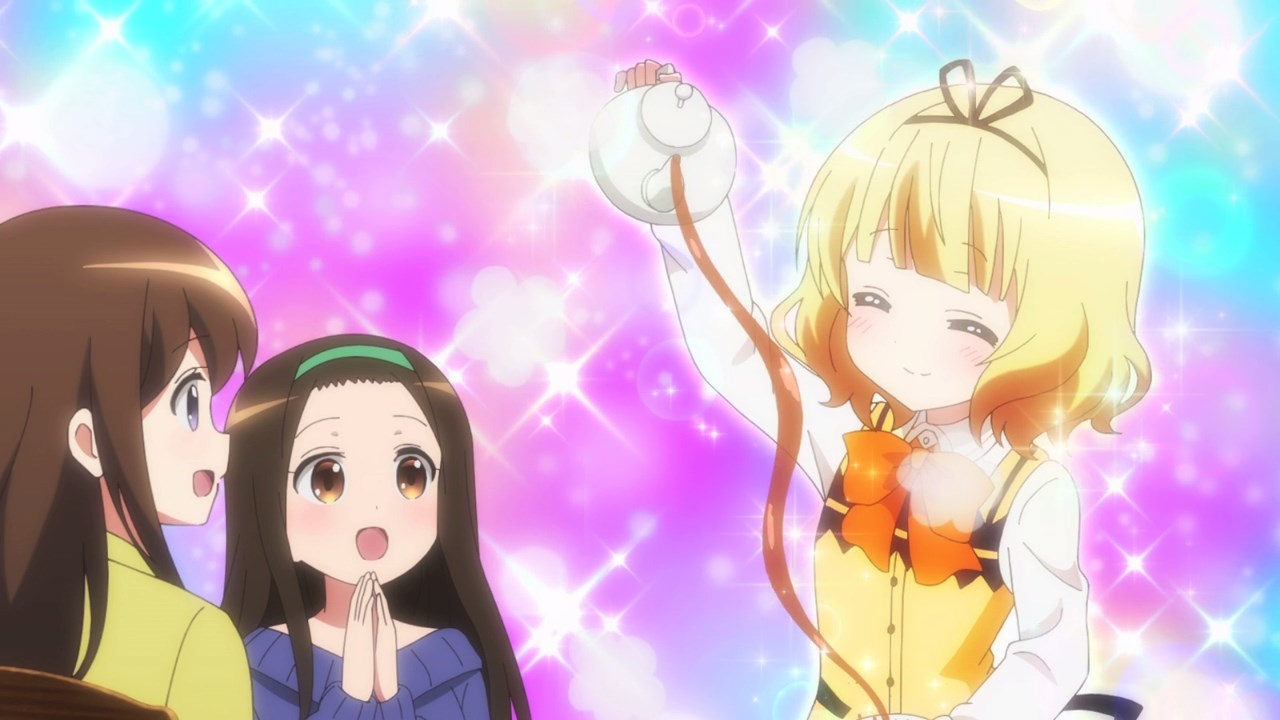 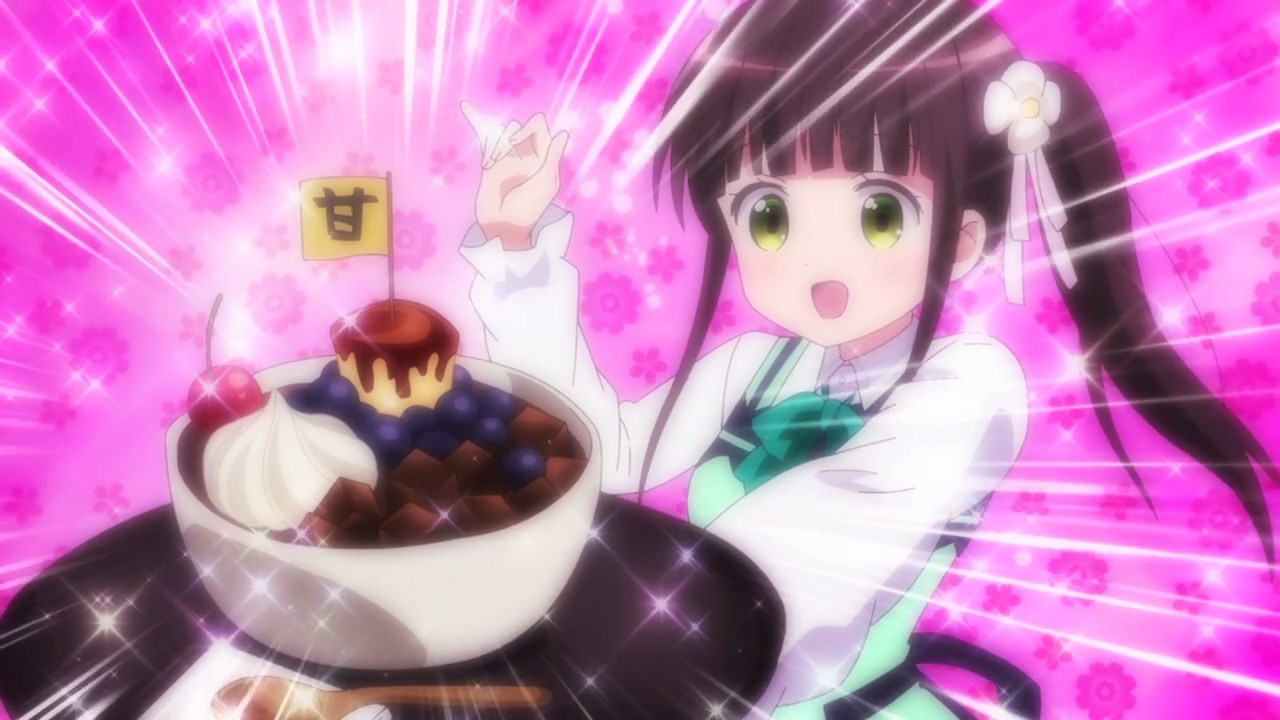 However, it appears that Sharo and Chiya are doing their same routine from their respective cafes.

Okay you two, I’m glad that you’re lending a helping hand to Chino-chan, but you’re not working at either Fleur de Lupin or Ama Usa An. 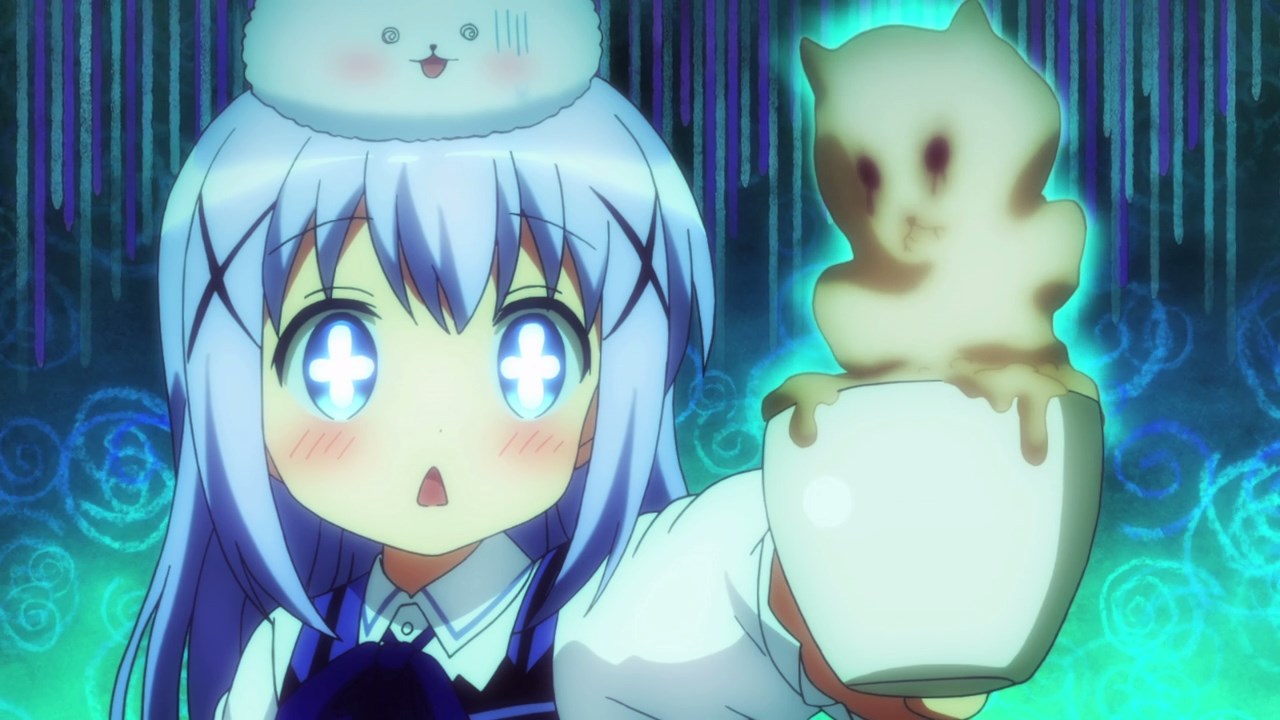 Not to be outdone, Chino Kafuu decides to show off her 3D latte art, although it looks grotesque that I don’t know if her latte art looked like a rabbit. 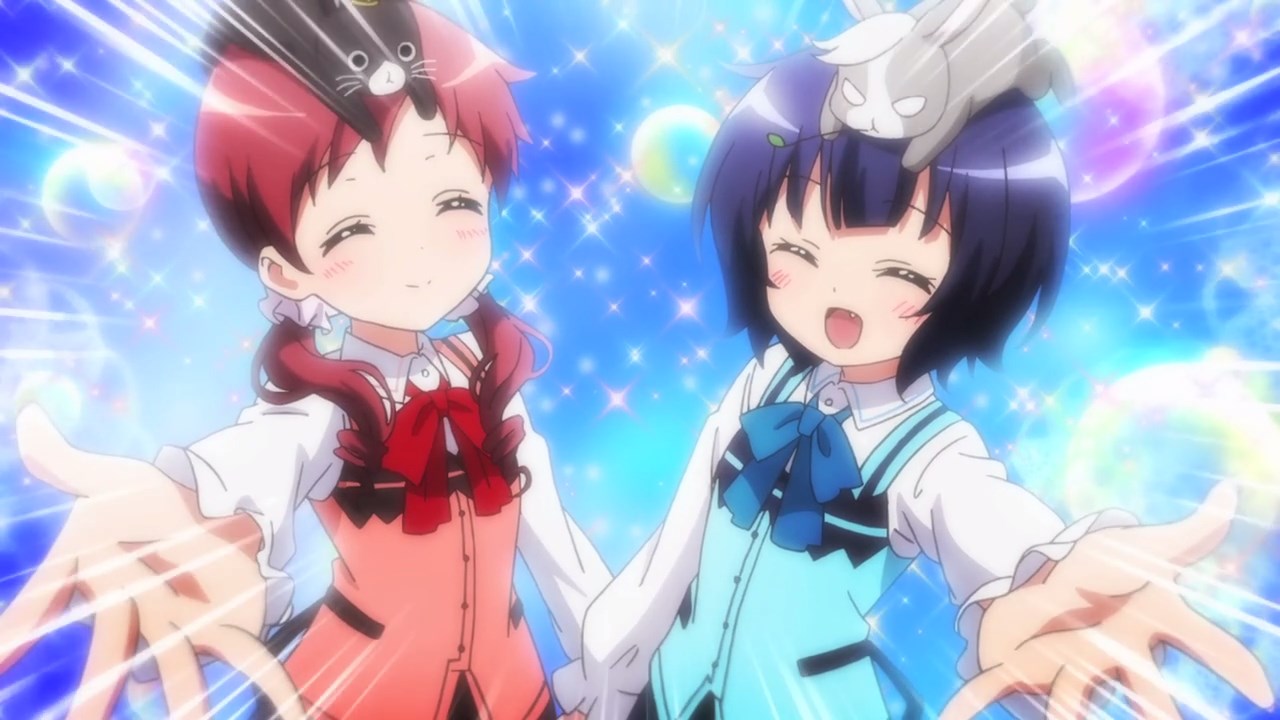 Oh yeah, it appears that Megumi Natsu and Maya Jouga are here to work at Rabbit House as part-time waitresses. Gotta say that Chino-chan got some great friends who can help her. 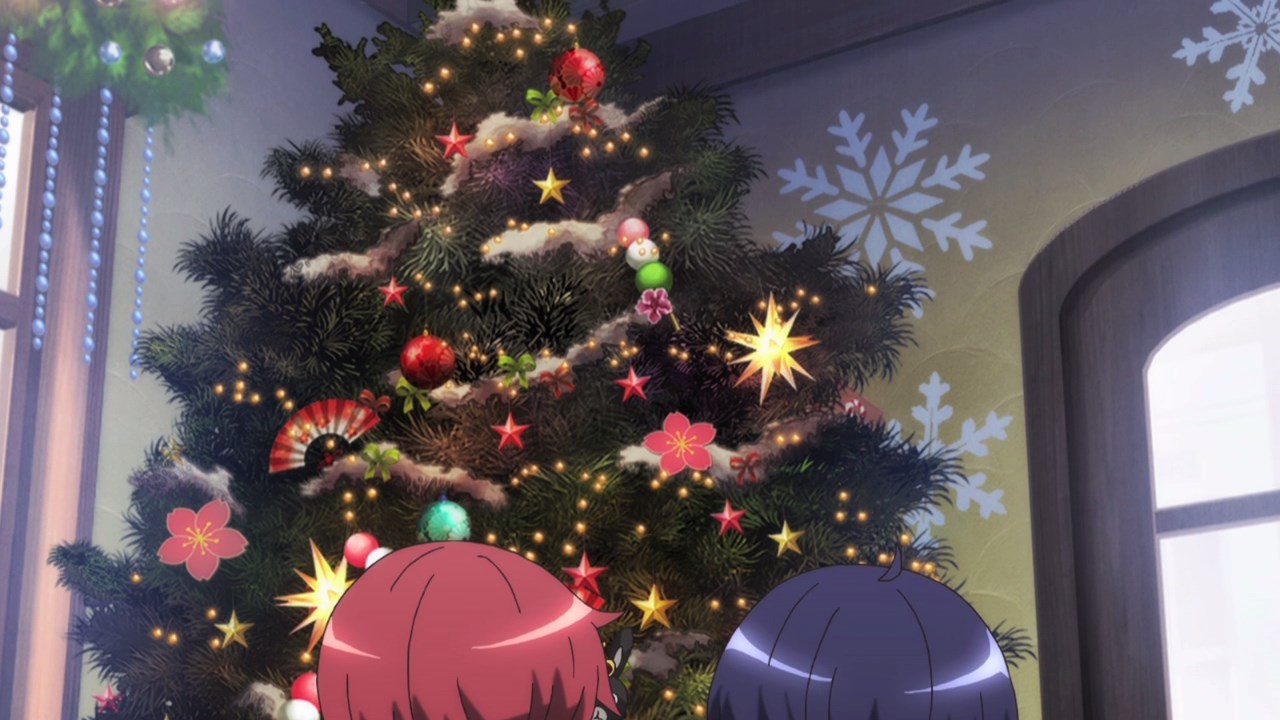 By the way, I forgot to mention but Rize Tedeza’s father brought a Christmas tree a while back.

While it’s been decorated by Chiya-chan, the only thing’s missing is the star which sits on top of the tree. Unfortunately, Chino-chan doesn’t have a star ornament. 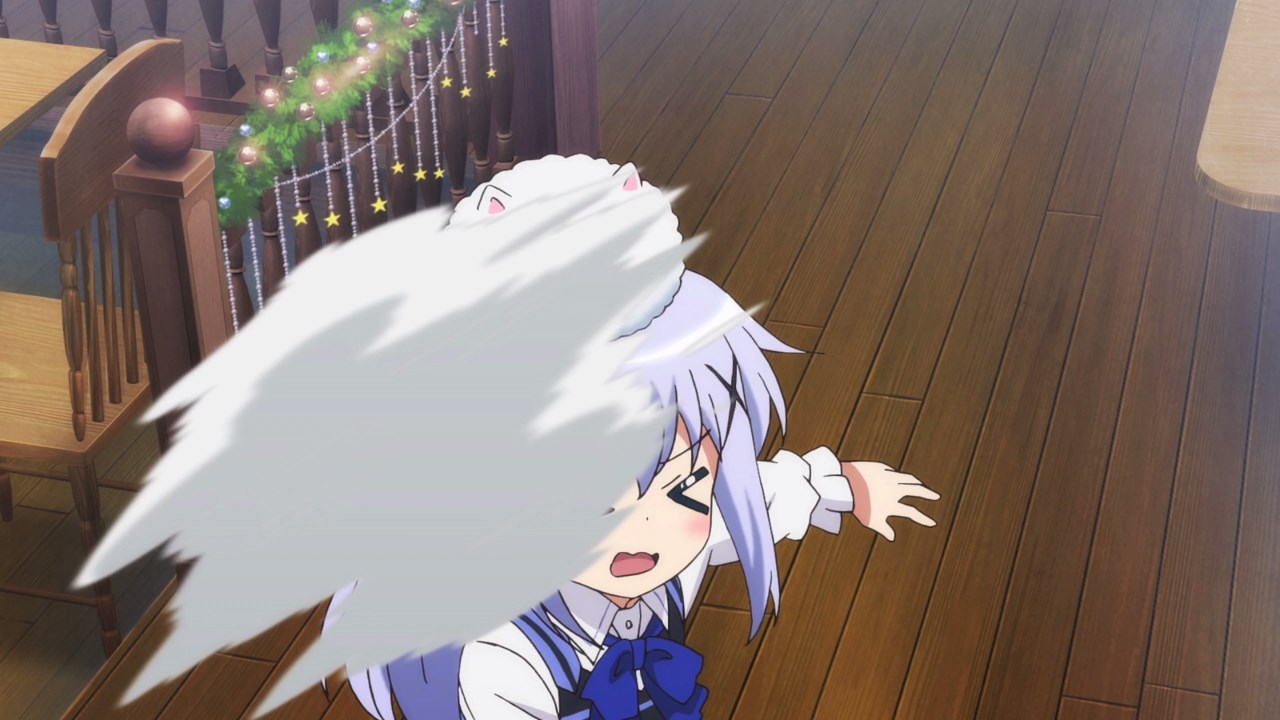 But wait, there’s an alternative solution as Chino Kafuu throws something towards the Christmas tree. 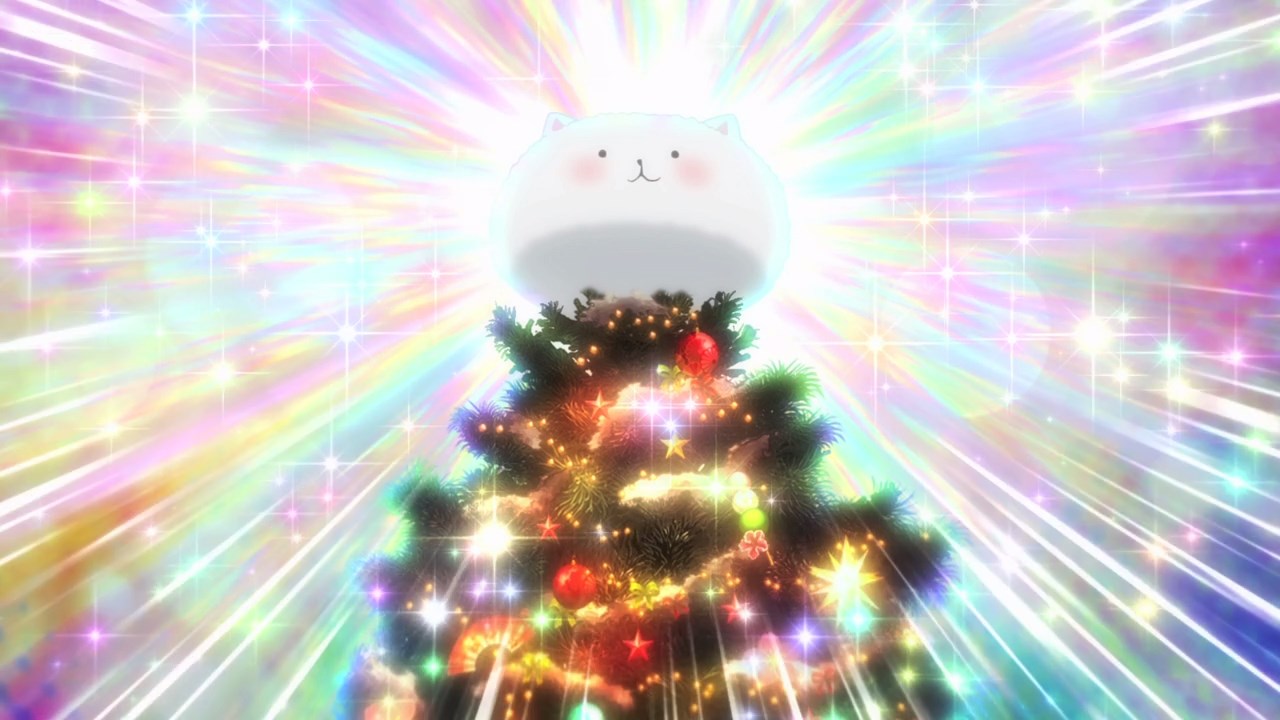 Anyways, Chino put a Tippy plushie that serves as the star of the Christmas tree. Wow, it looks better than a typical star! 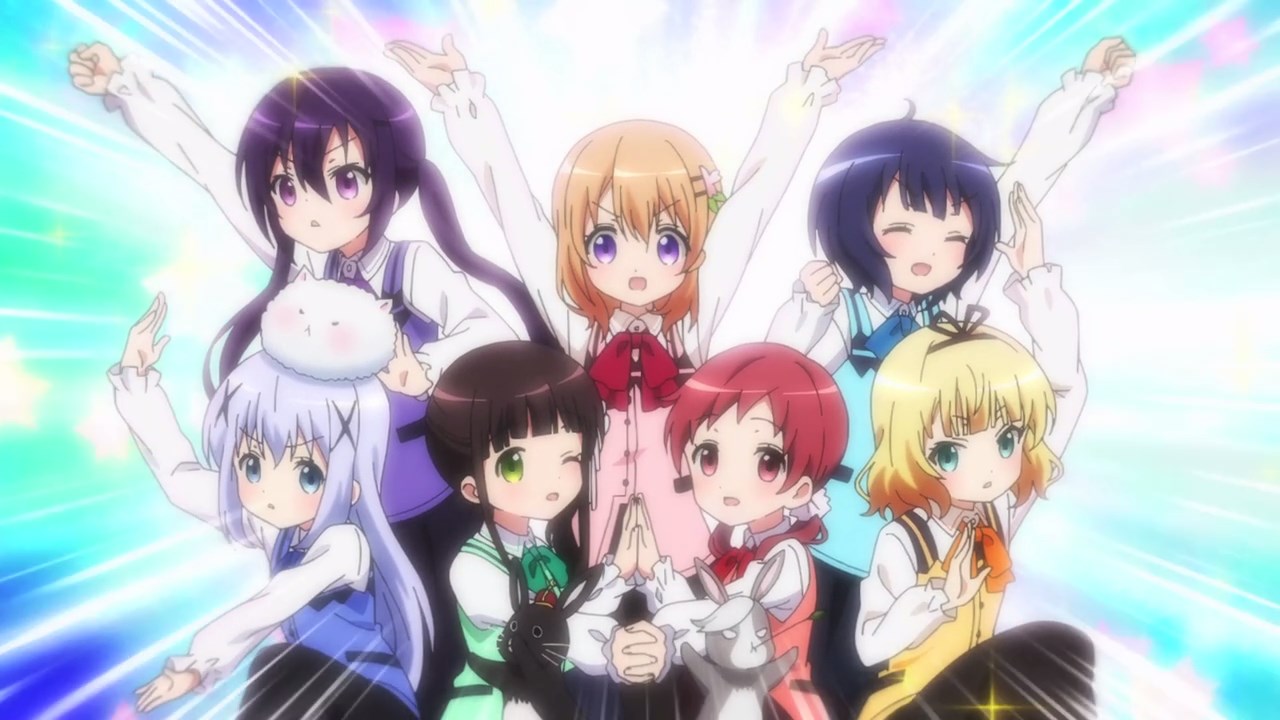 Now then, Christmas Eve has arrived as the Rabbit Rangers are finally formed at Rabbit House. 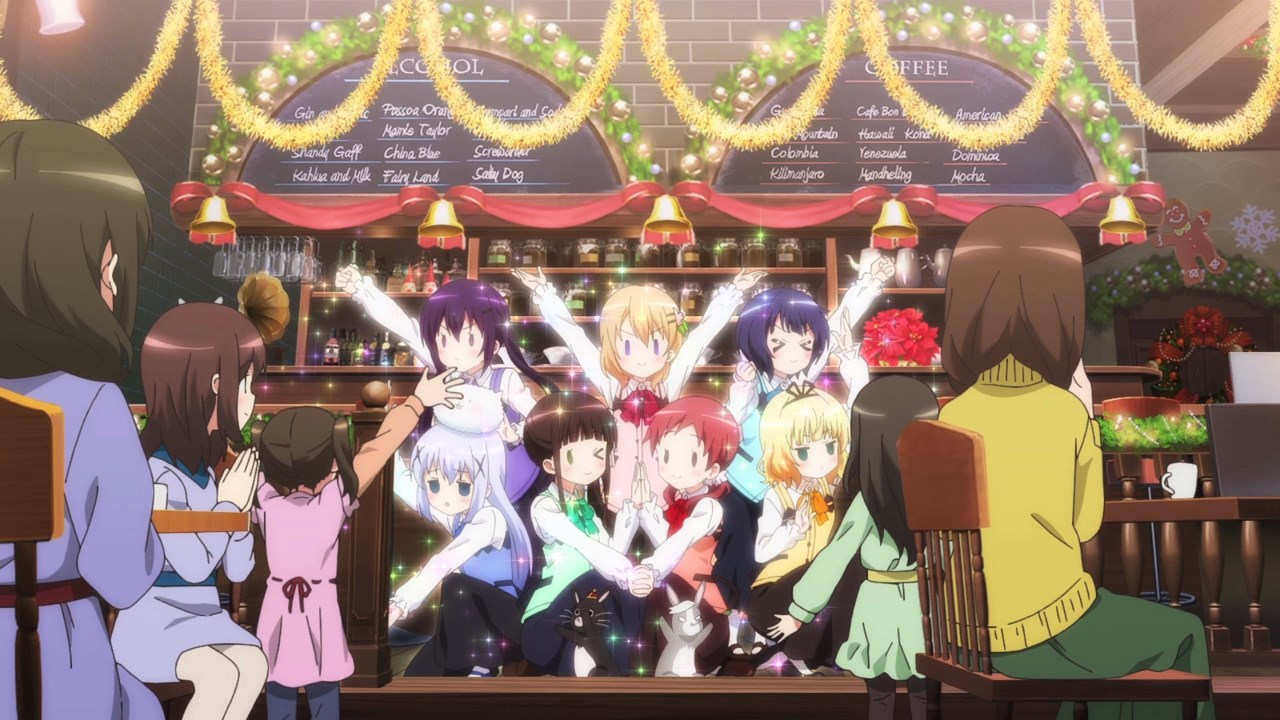 And really, it’s amazing to see the girls strike a pose in front the customers. Of course, the night is still young as they still need to throw a party! 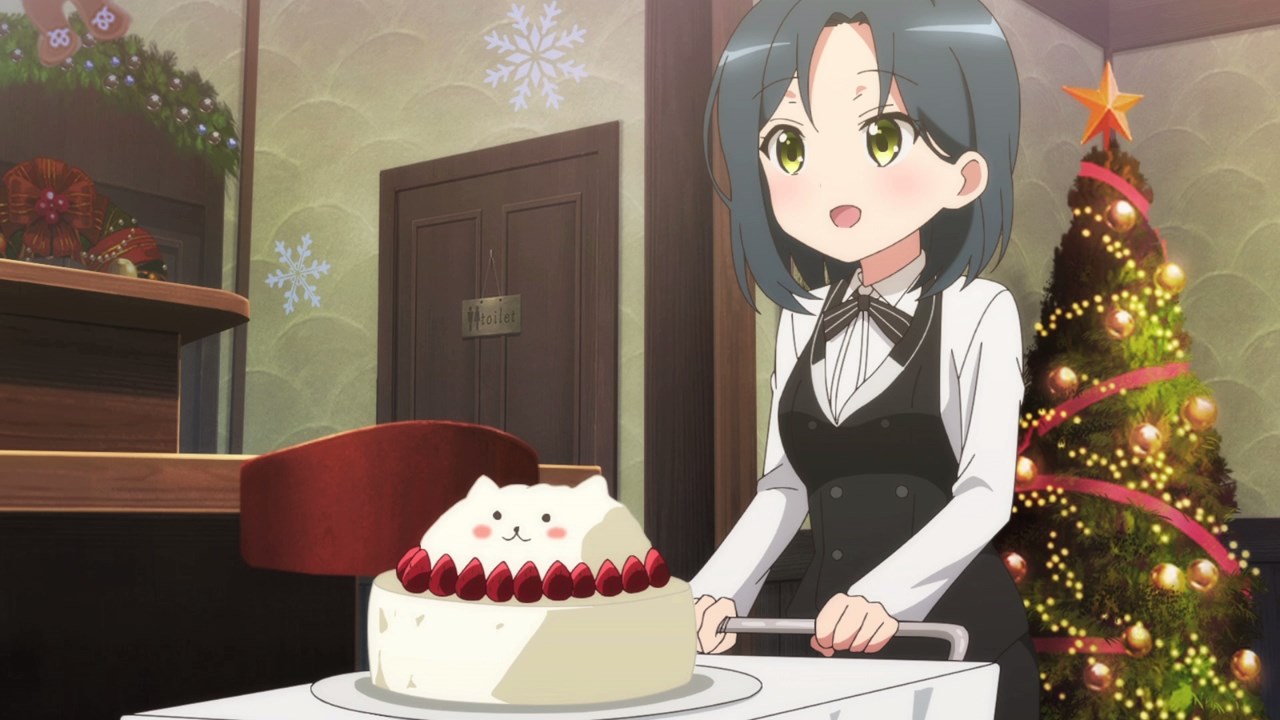 Fortunately, Rin Mate brought a Christmas cake as she wants to apologize for filling up the cafe full of people. Then again, it’s nice that Aoyama’s editor made Rabbit House into a popular cafe. 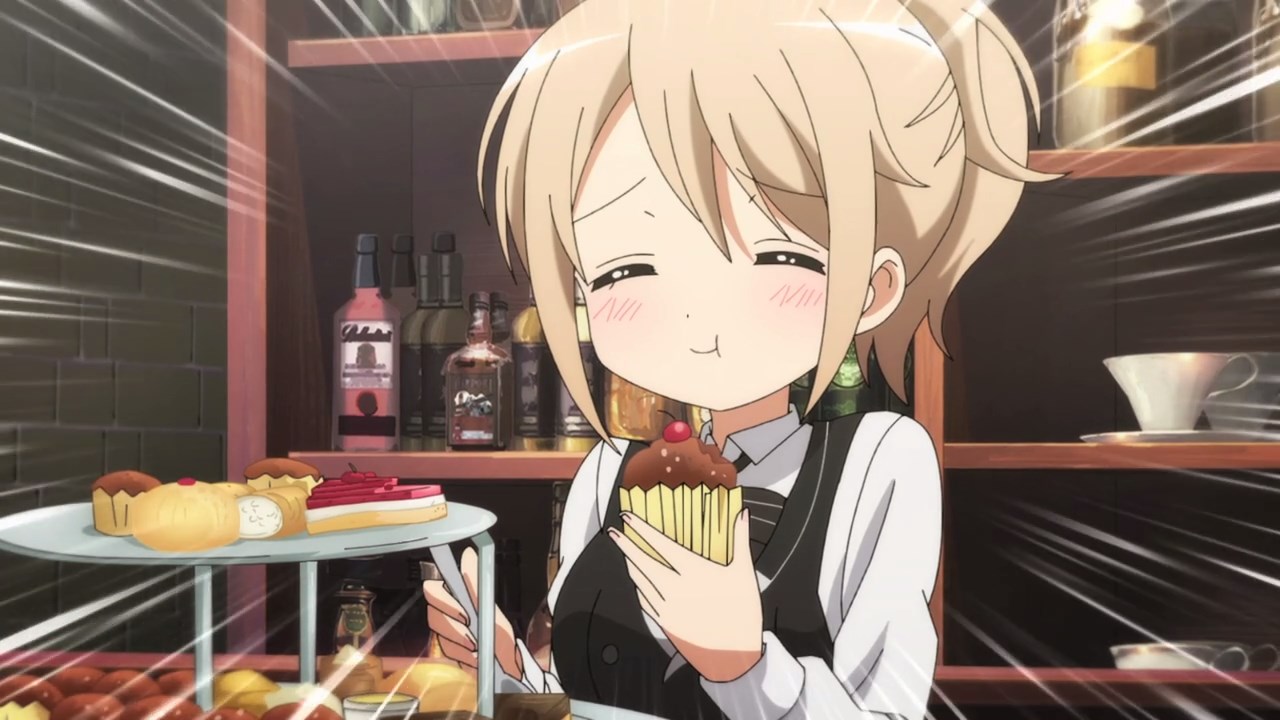 Speaking of “Blue Mountain” Aoyama, she’s eating pastries as we speak in which Rin-chan doesn’t like her author slacking off. 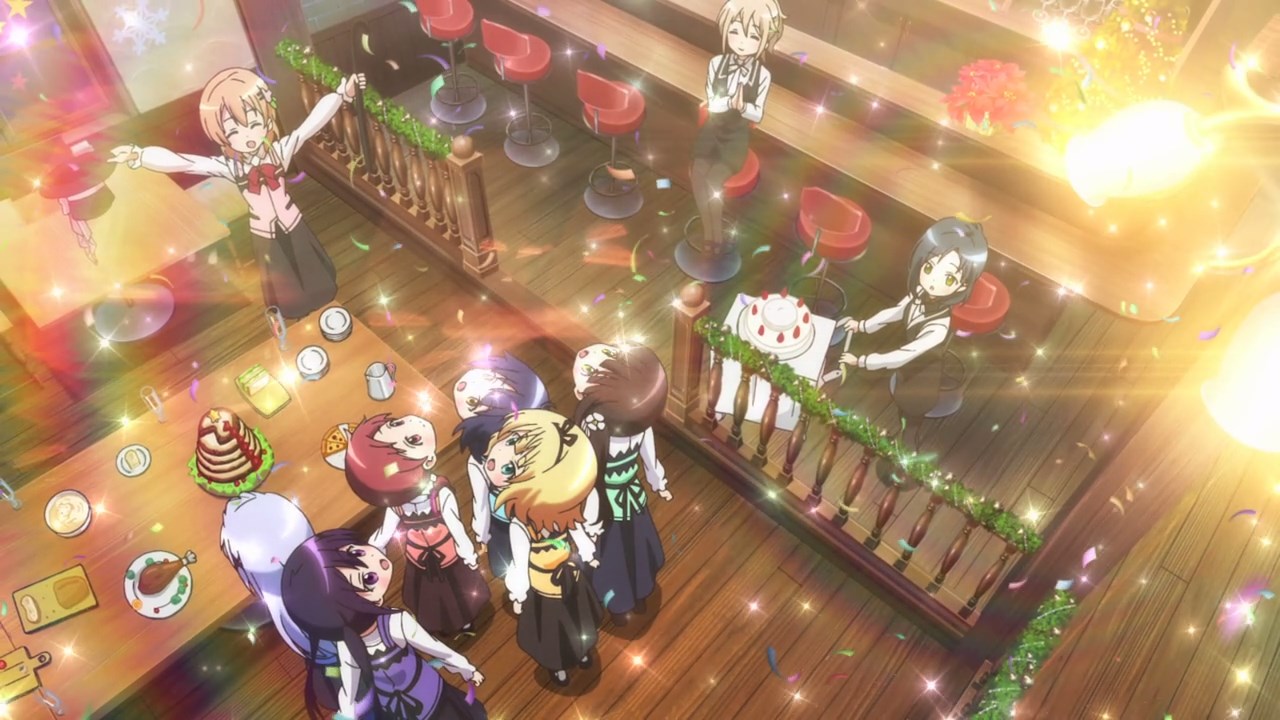 But yes, the Christmas party at Rabbit House was a blast. Oh yeah, Cocoa-san performed a magic trick and I have to say that she got the hang of it. 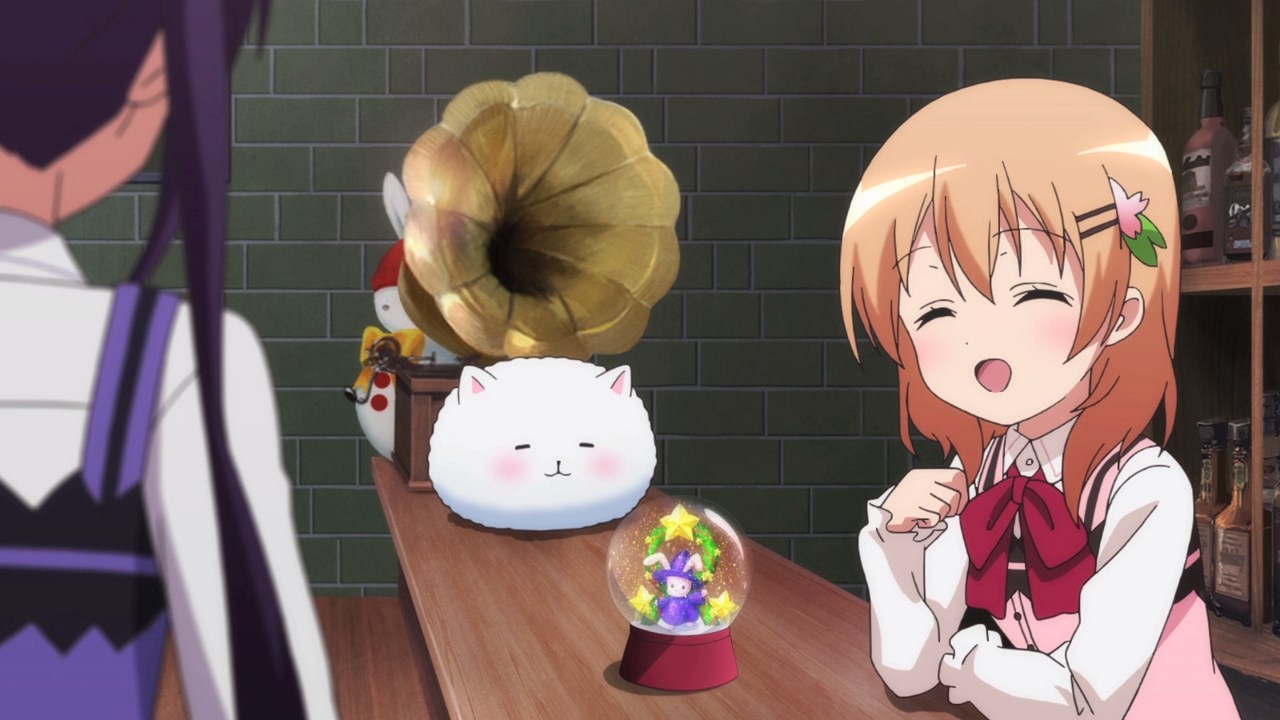 And now let’s end this episode as Cocoa Hoto received a snow globe from Chino Kafuu. Of course, what about Chino-chan? 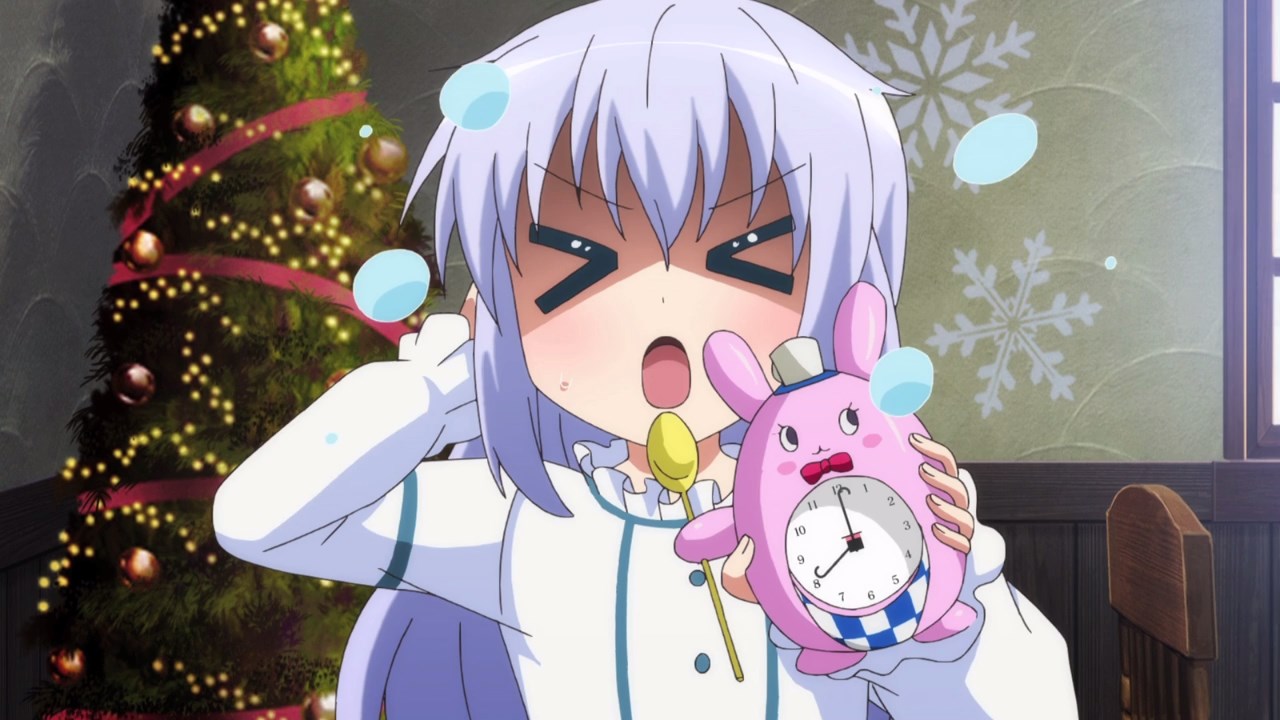 Well, she got an alarm clock where it refused to stop its alarm. Oh, and it’s voiced by Cocoa-san which is why Chino-chan is really annoyed right now.

Anyways, that’s about it for this episode as I’ll see you next time for the finale of GochiUsa Bloom.