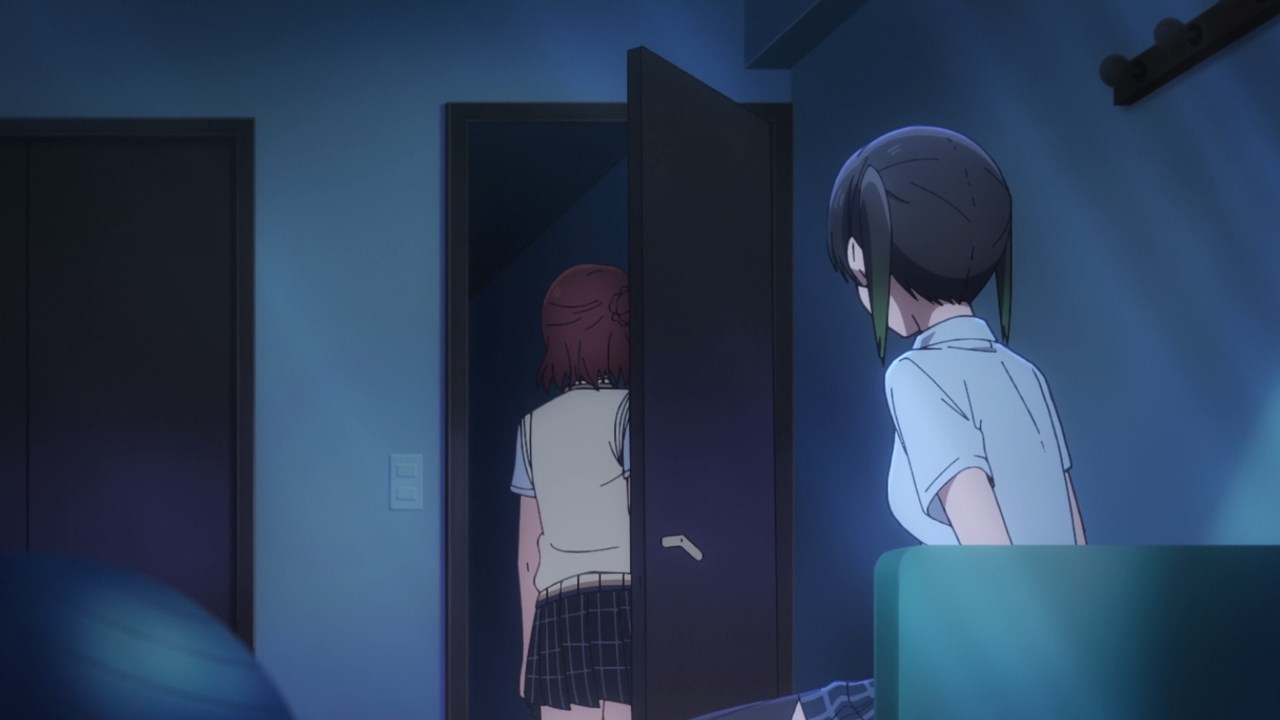 Oh boy, it appears that Ayumu Uehara decides to go home as she wants Yuu Takasaki to forget about it. Then again, Yuu-chan can’t forget about being tackled by her childhood friend. 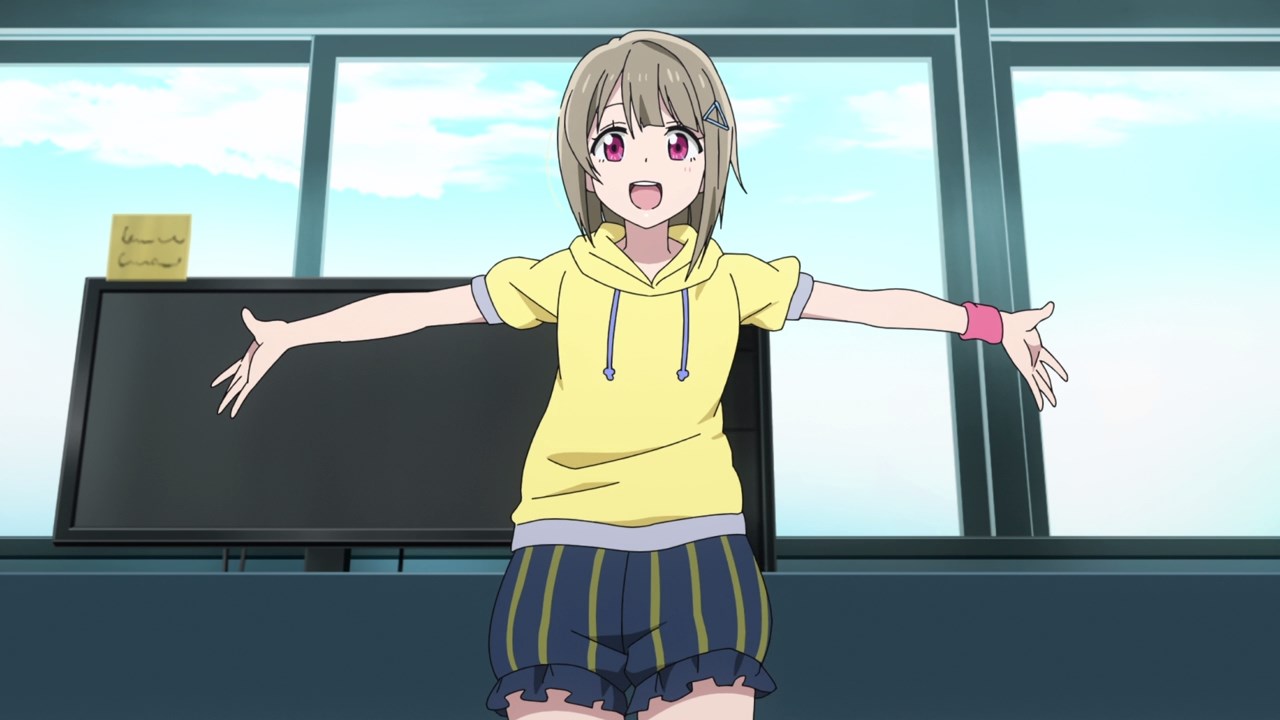 Anyways, it’s time to make preparations for the 1st School Idol Festival at Nijigasaki High School as Kasumi Nakasu is eager to practice together with her fellow school idols. 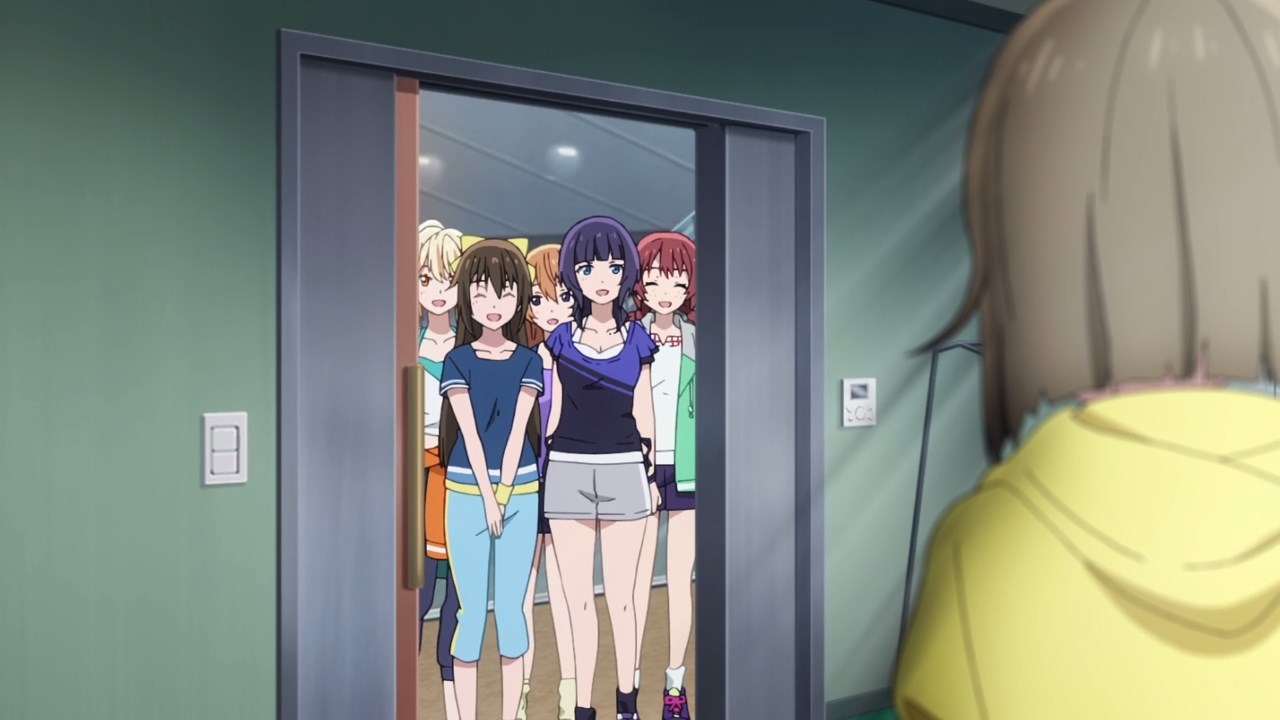 Unfortunately, Ayumu Uehara and the rest are busy preparing for the festival as it’s revealed that they’re gonna perform at separate locations. One school idol per stage. 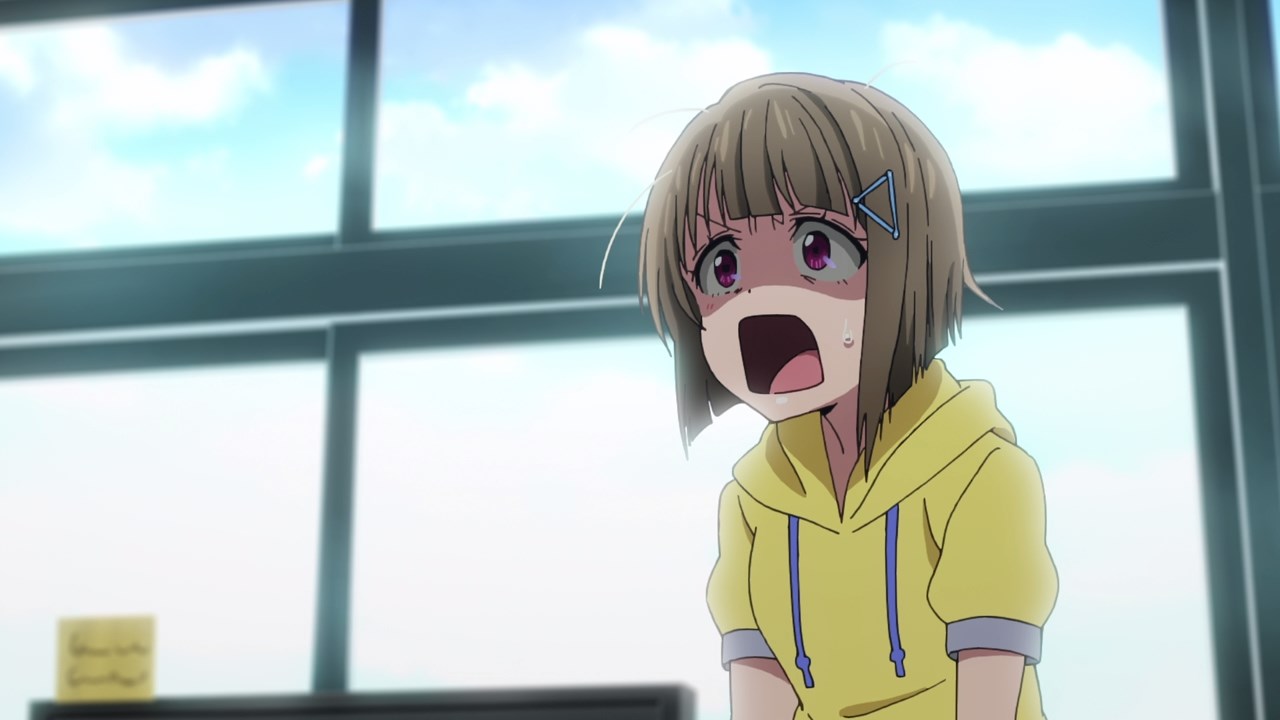 In any case, looks like Kasumin will have to train by herself then. Poor girl… 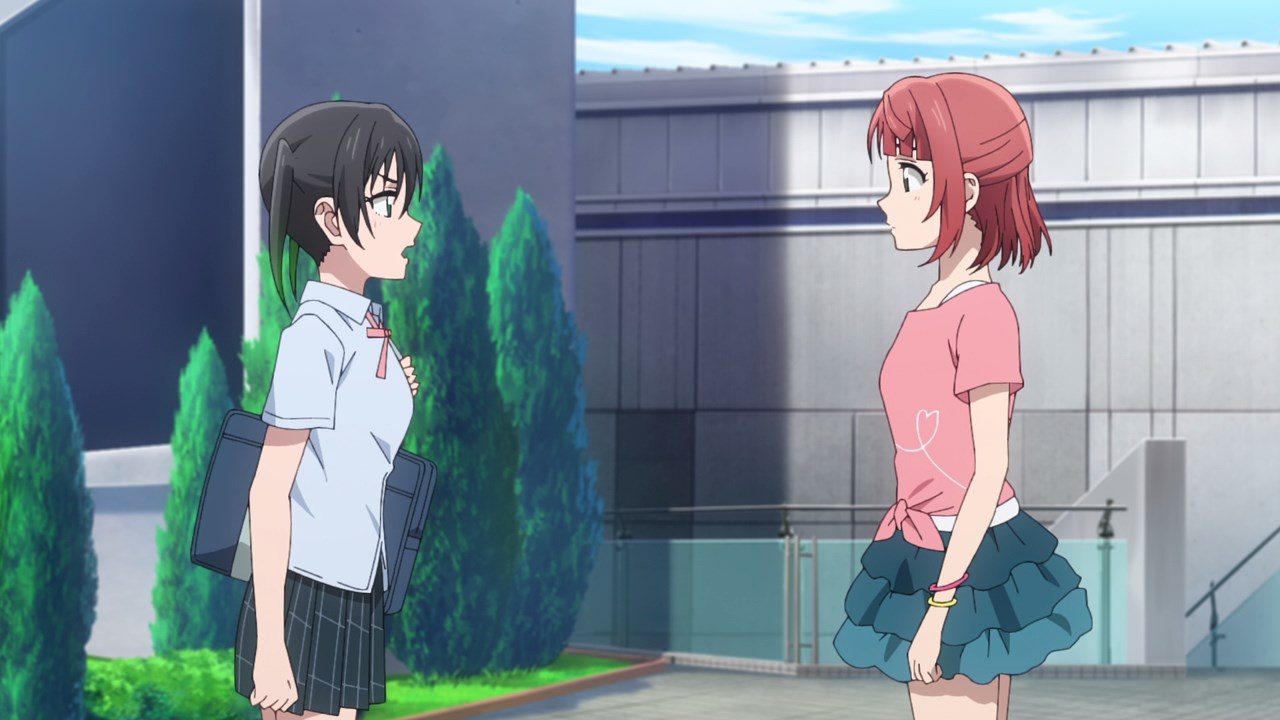 Now let’s go back to Yuu Takasaki and Ayumu Uehara where the former wants to have a serious talk to the latter. In fact, Yuu wants to talk about her dream but Ayumu think it differently, saying that she can’t move forward without Yuu-chan around.

Okay Ayu-pyon, you have to hear Yuu-chan out first before lashing at her ’cause that would make a bigger misunderstanding. It seems that Ayumu is still bitter due to Yuu spending her time with Setsuna. 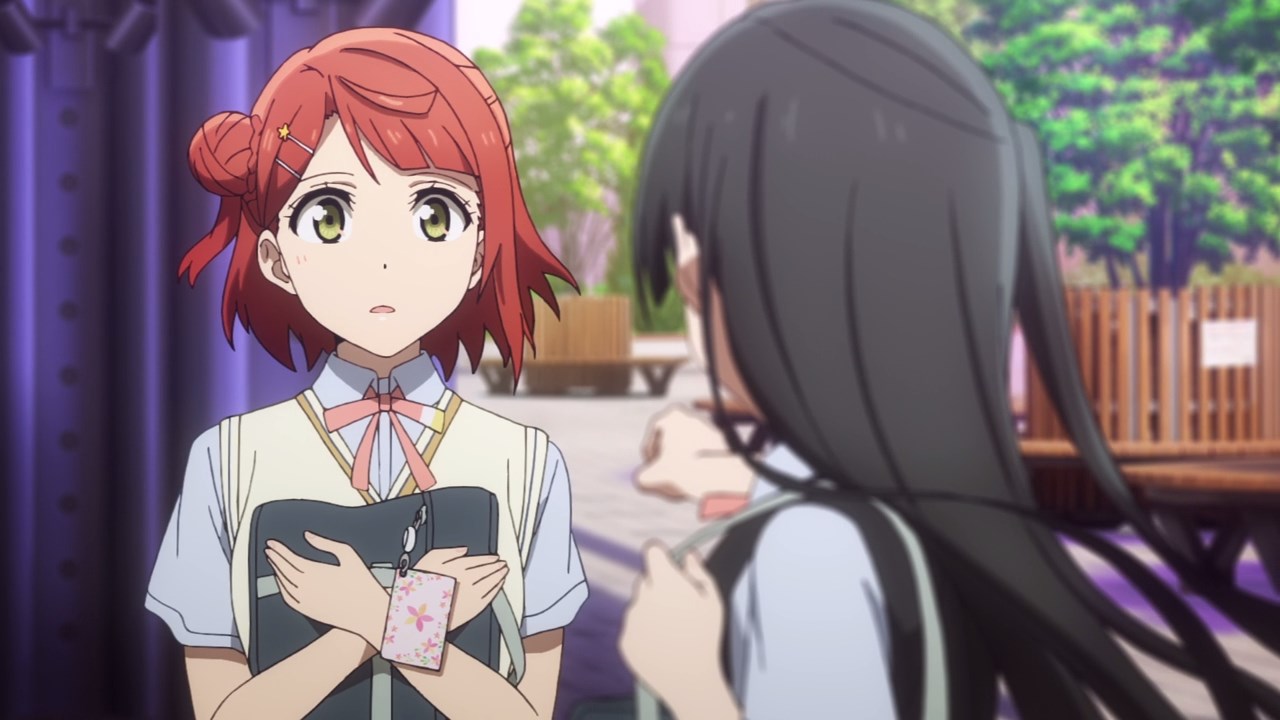 But speaking of Setsuna Yuki, looks like she offered a fist bump to Uehara as Setsuna wants Ayumu to move forward and see it through the end. 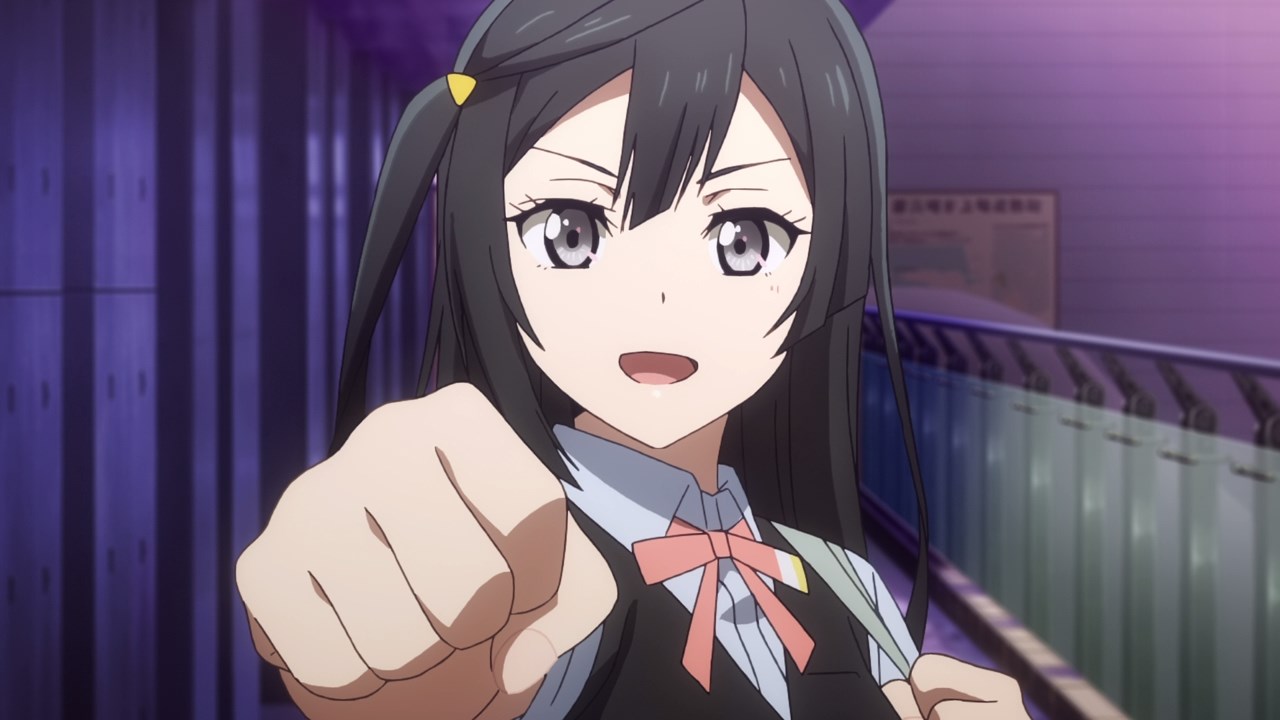 Then again, it would be better if Setsuna clear up some misunderstandings that she’s just a friend to Yuu-chan and nothing else. I mean, she’s not stealing Yuu away from Ayumu. 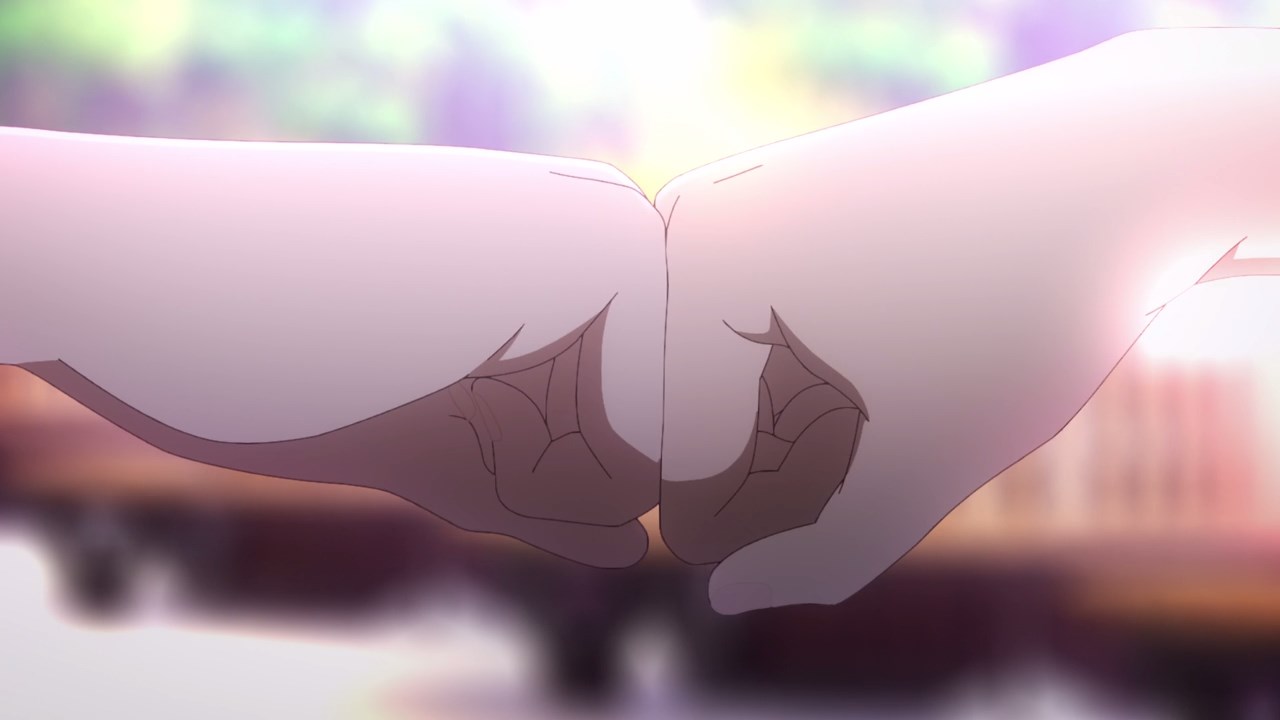 In any case, looks like Ayumu Uehara made a fist bump to Setsuna Yuki as they treat each other as worthy rivals, although I wish the misunderstandings regarding Yuu-chan have been resolved. 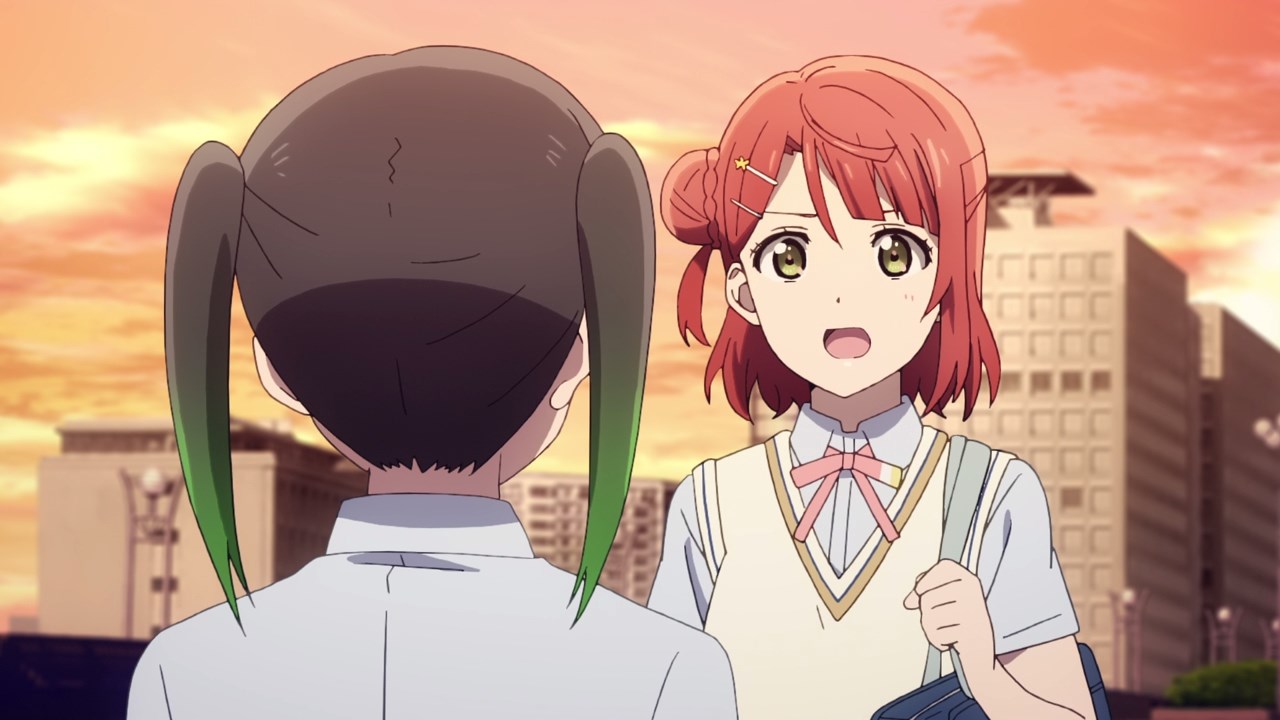 Now let’s move onto Ayumu Uehara where she went to see Yuu Takasaki and make amends with her childhood friend. 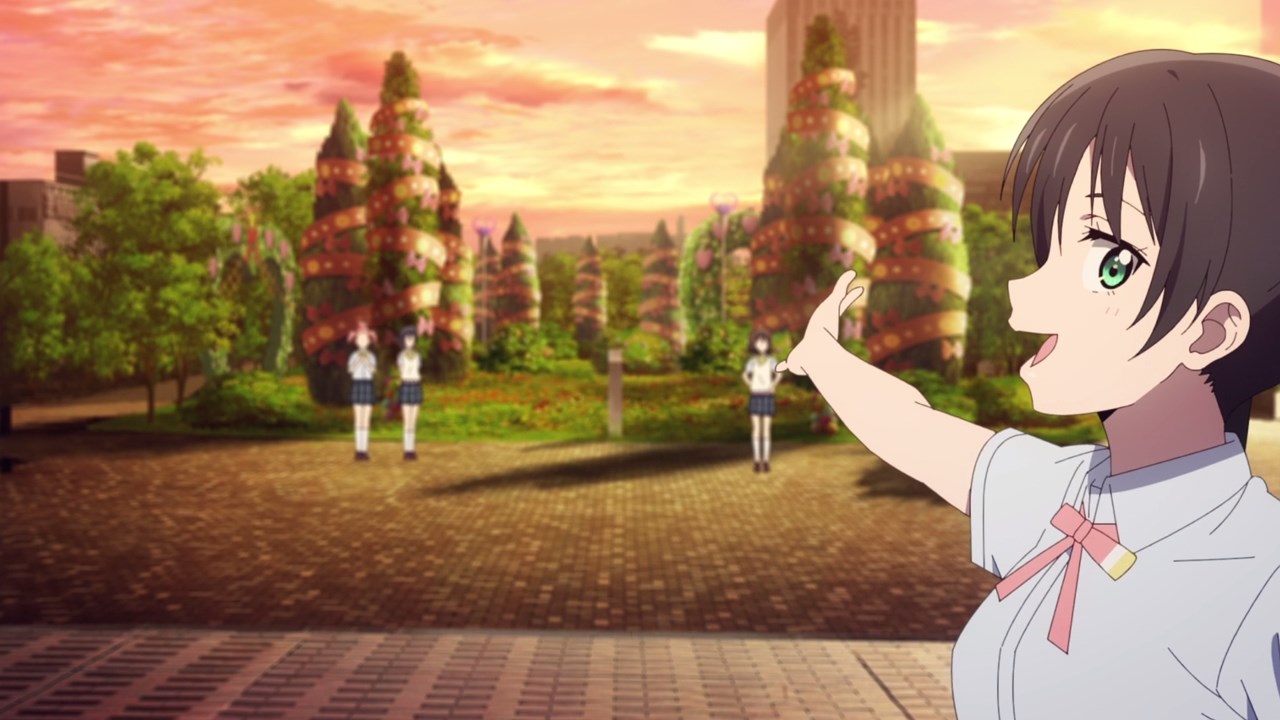 But first, Yuu-chan wants to show something to Ayu-pyon as she made a stage just for her. Yeah, it looks lovely alright. 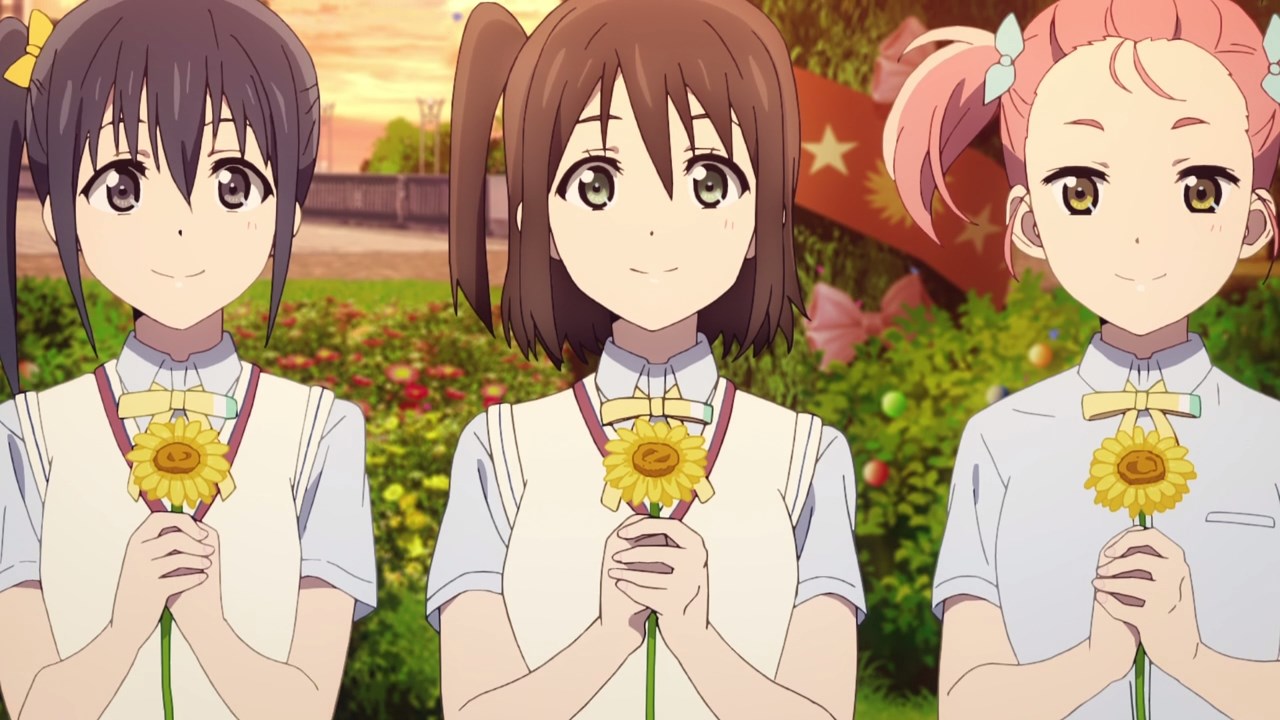 Of course, Takasaki didn’t made a stage by herself as she got some help from her classmates.

Oh yeah, the motif for Ayumu’s stage is based on flowers like this yellow gerbera daisies for example where it means “love”. 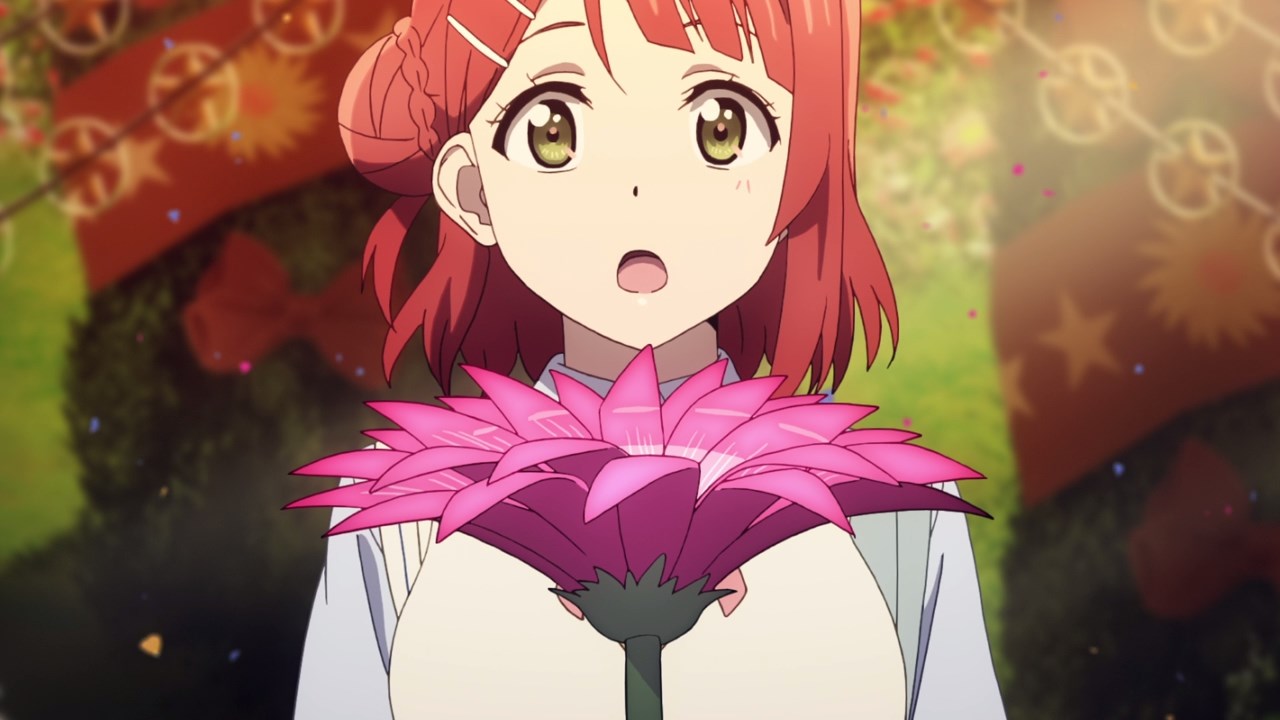 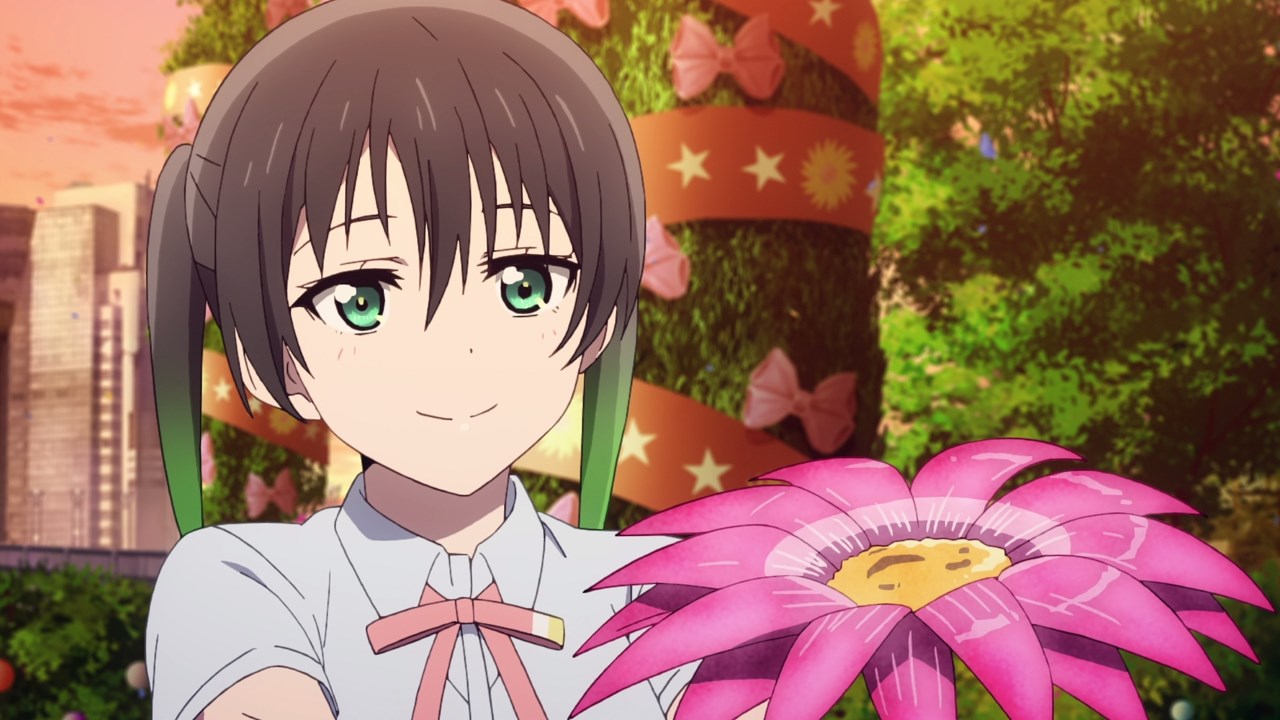 And also, here’s Yuu Takasaki where she showed a pink rhodanthe to Ayumu-chan. In floriography, it means “feelings that never change” and thus Yuu’s feelings for Ayumu remained the same. 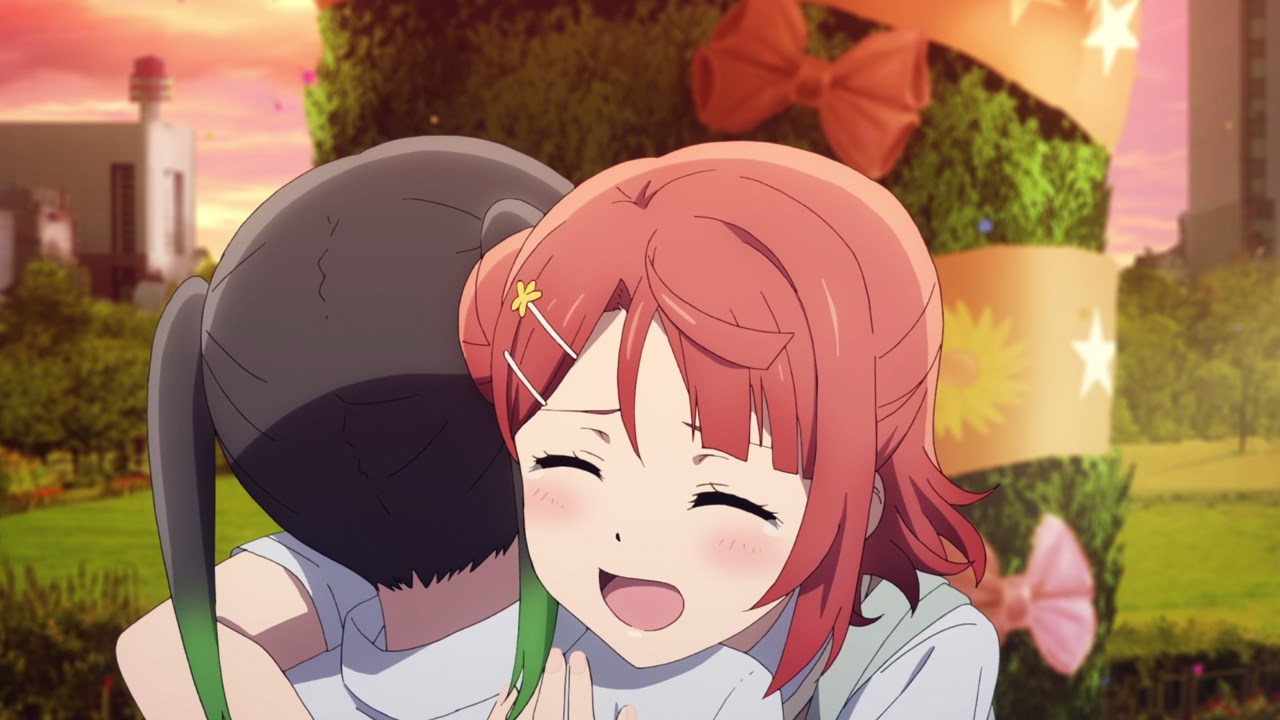 Well then, looks like they finally reconciled after the previous episode. Now the only thing I wanna know is Yuu Takasaki’s dream. 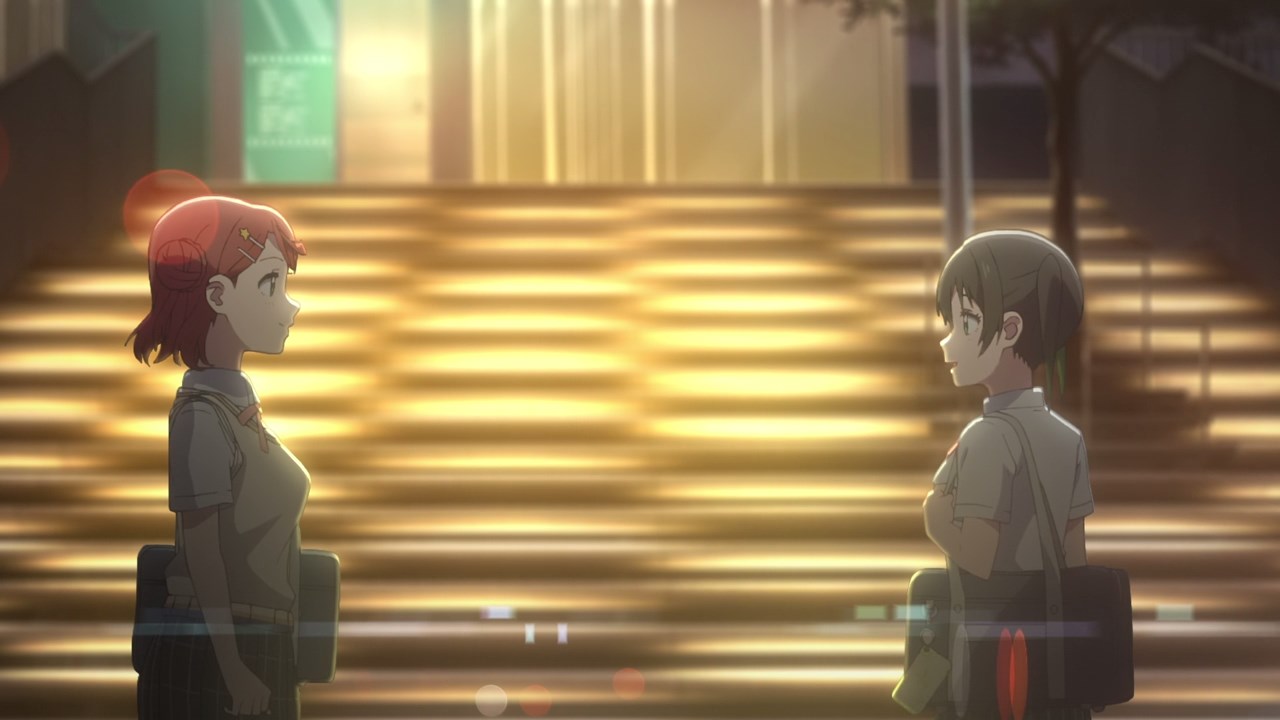 Turns out that she wants to learn music so she can compose songs for the school idol club. Okay, so Yuu wants to become a music producer, which is fitting since she turned all members into bonafide school idols during the course of this series.

But seriously though, glad that she cleared up some misunderstandings towards Ayumu ’cause I’m worried that Uehara is gonna become a yandere and kill everyone. As for Ayumu, she has a present for Yuu-chan. 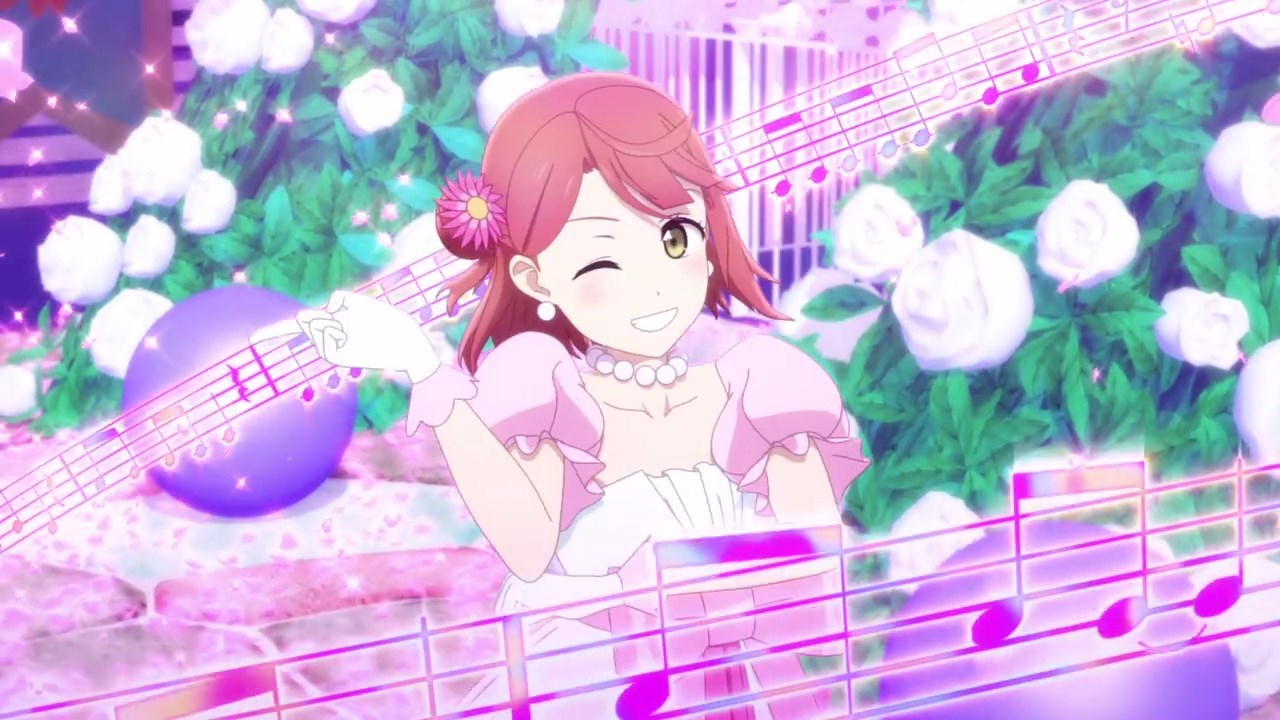 For you see, Ayumu made an impromptu performance with her new song at the same stairway leading up to their apartment. Well, that makes 2 songs for Uehara. 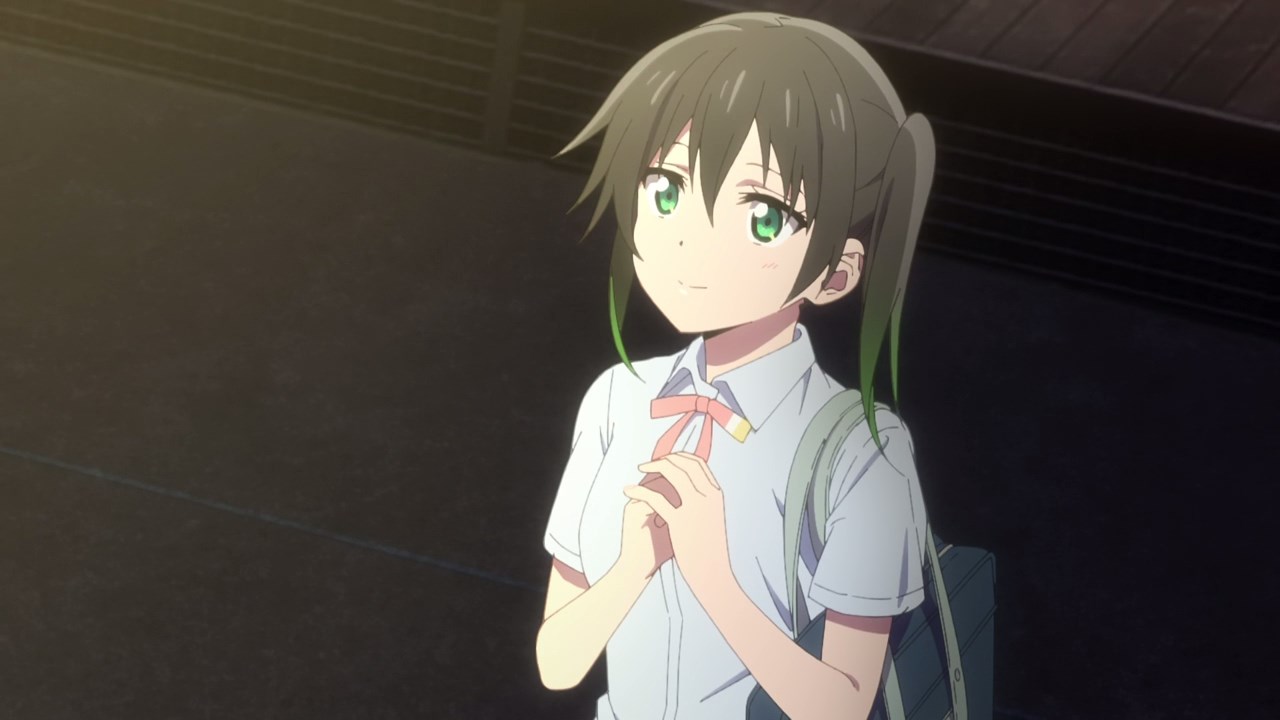 Of course, it’s all just her imagination as Yuu Takasaki is really happy to see Ayumu living the dream as a school idol. Looks like she’s motivated to make a song for the school idol club. 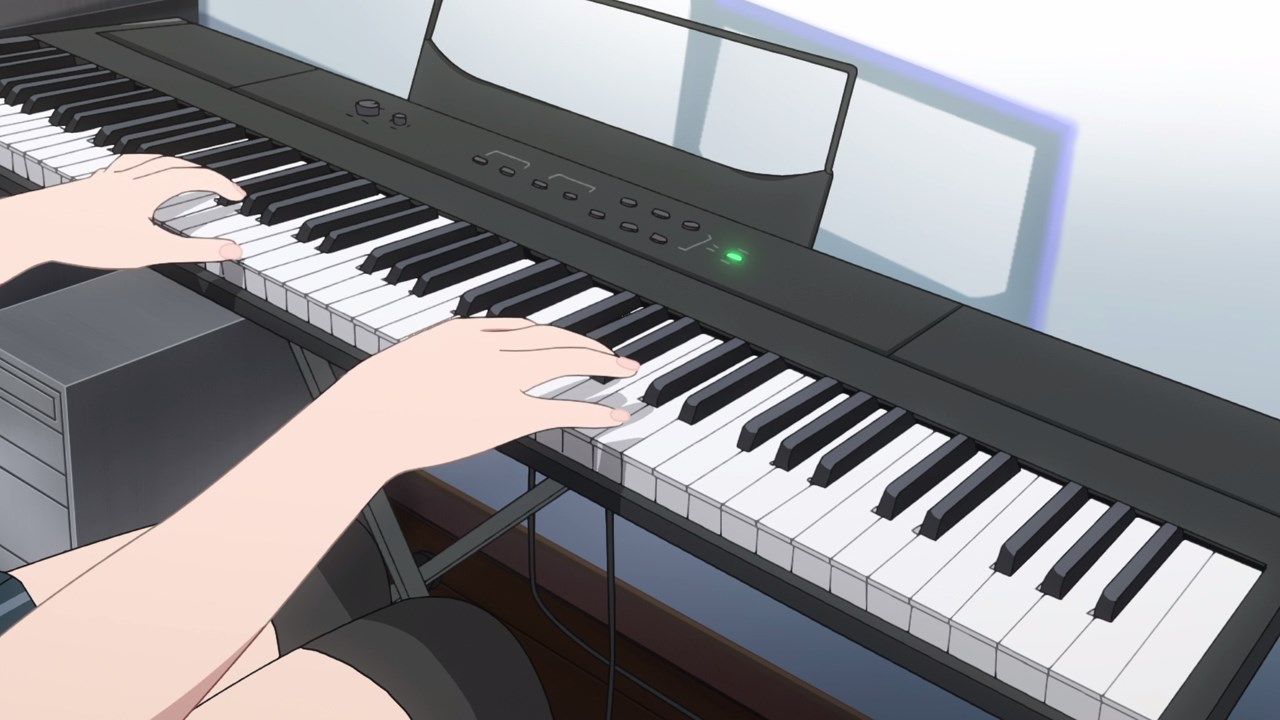 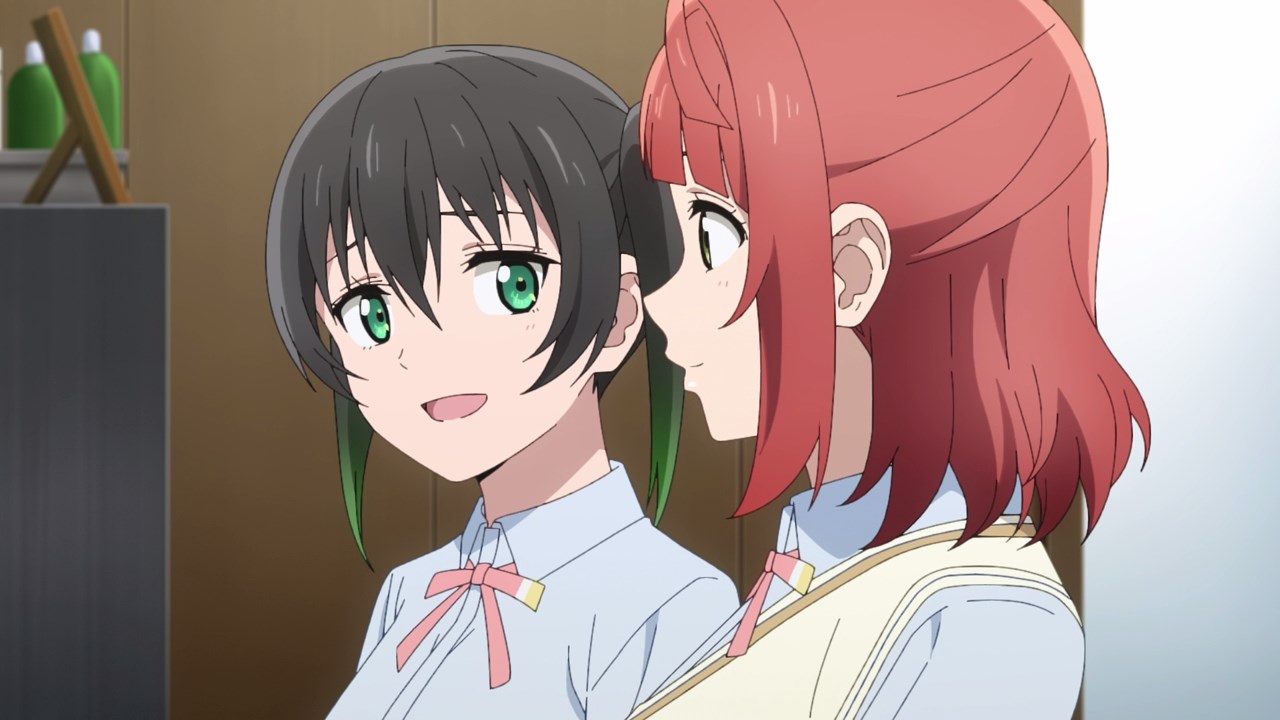 Then again, her composition is a bit rough as Takasaki is planning to make a song for all 9 school idols or so I hope. Anyways, I’ll see you next time for the final episode!