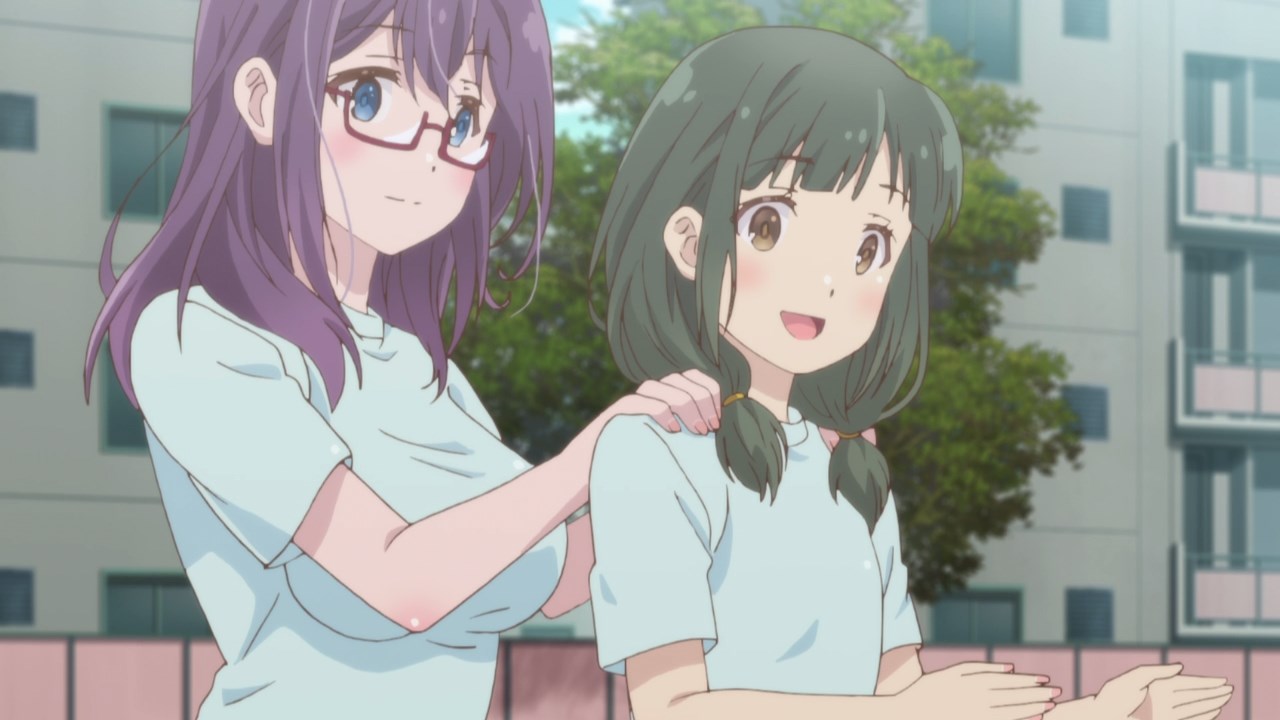 Here’s both Taeko Nagafuji and Akira Hino where they’re participating in a PE activity. Speaking of Nagafuji, I wonder what happened to her after spending the night at Hino’s house? 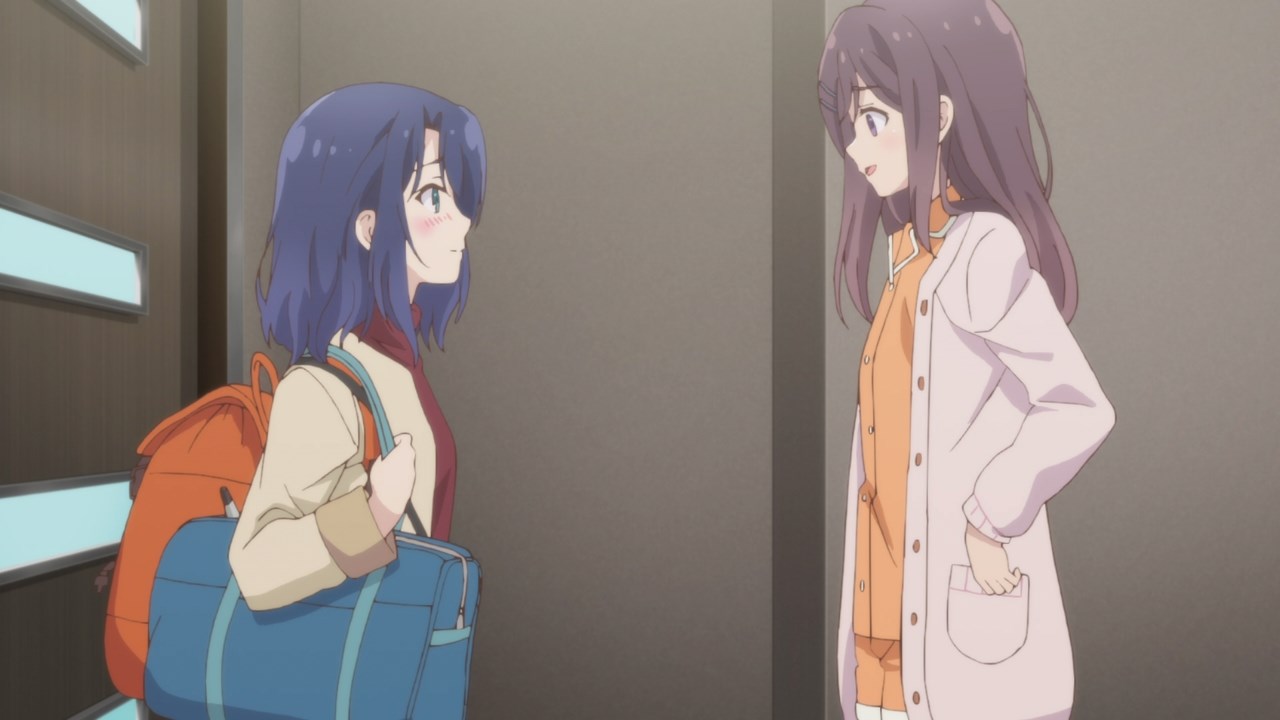 Now then, let’s move onto the final episode where Sakura Adachi went to Hougetsu Shimamura’s house and stay there for a week. I mean, she has everything packed-up.

Okay Adachi, did your mother allow you to stay at a friend’s house? Then again, her mother doesn’t care about her daughter a bit. 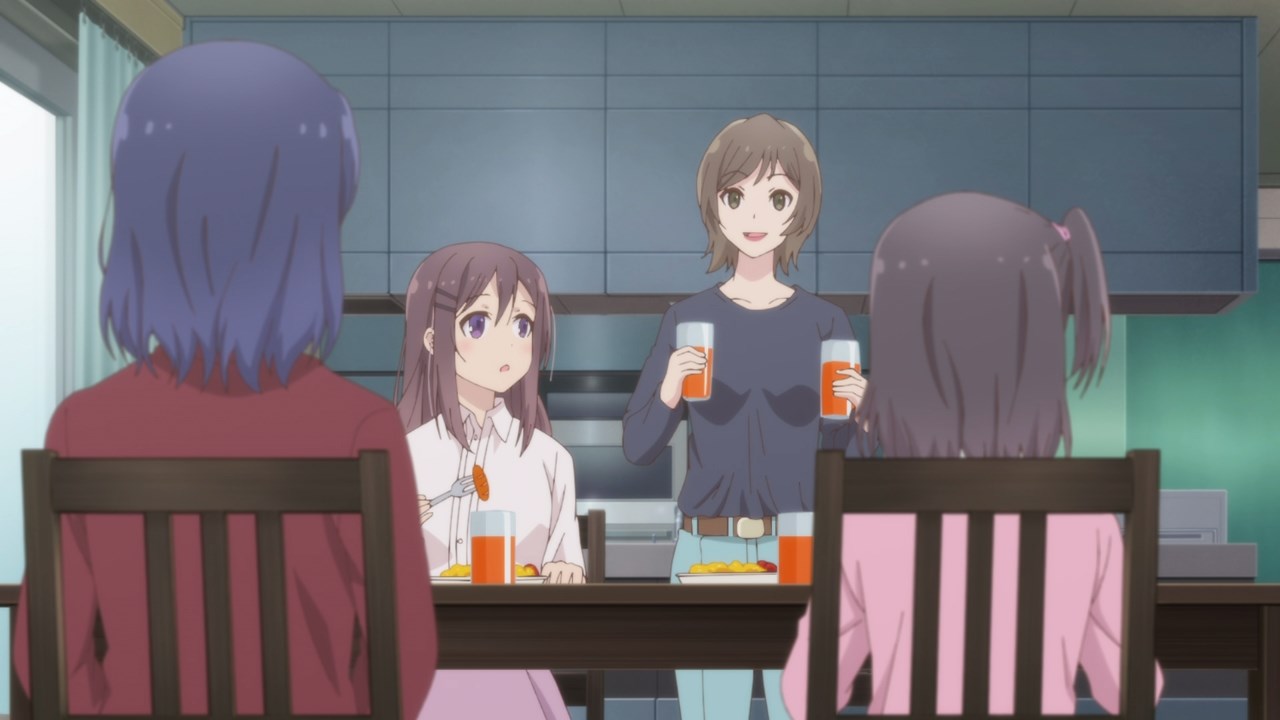 On the other hand, Hougetsu’s mother welcomes Sakura Adachi with open arms as she talks about how her daughter is a sleepyhead and such, although she’s not overtly mocking Sakura ’cause that would be bad. 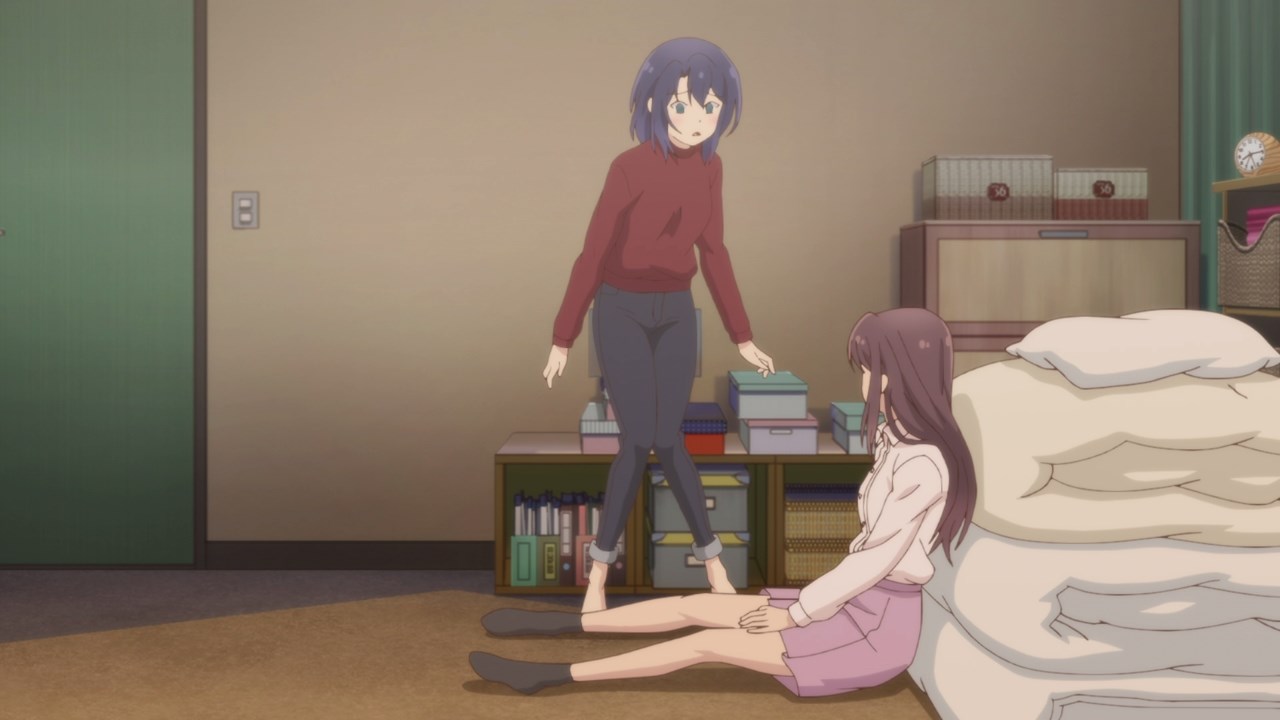 Now let’s move onto the next scene where Shimamura offered Adachi to sit on her lap. C’mon, they’re both girls after all so it’s time for Sakura to spend her time with her friend. 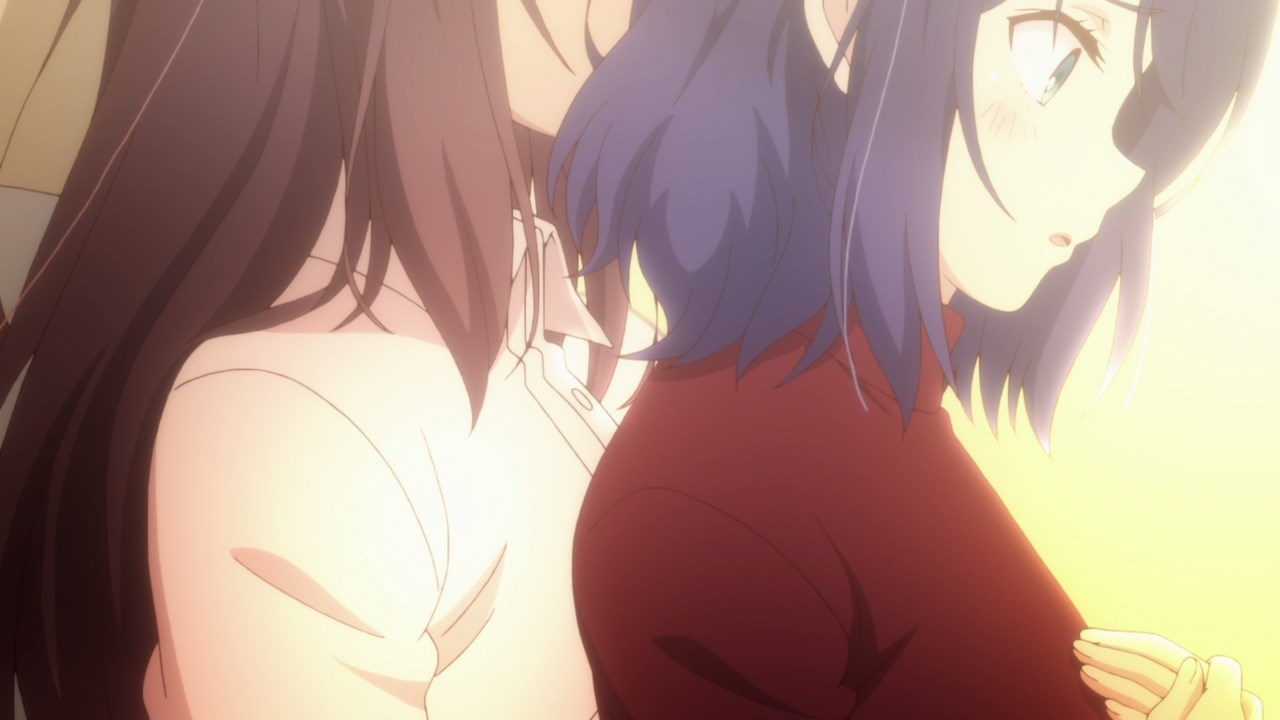 But as you can see, Sakura Adachi is now sitting on Hougetsu Shimamura’s lap and not only that, but her head is resting on Shimamura’s soft breasts. 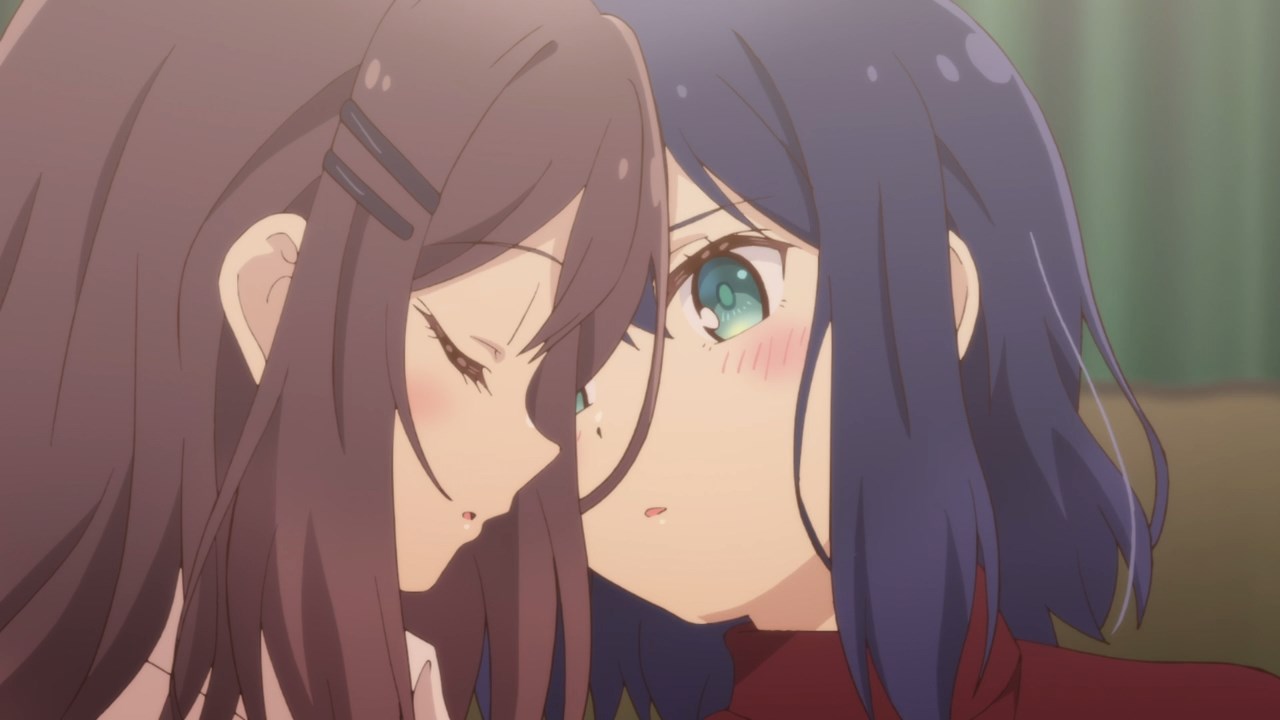 Oh yeah, and Adachi is about to kiss Shimamura while she’s asleep. Oh you cheeky girl, you sure want to take the opportunity to seal Shimamura’s first kiss. 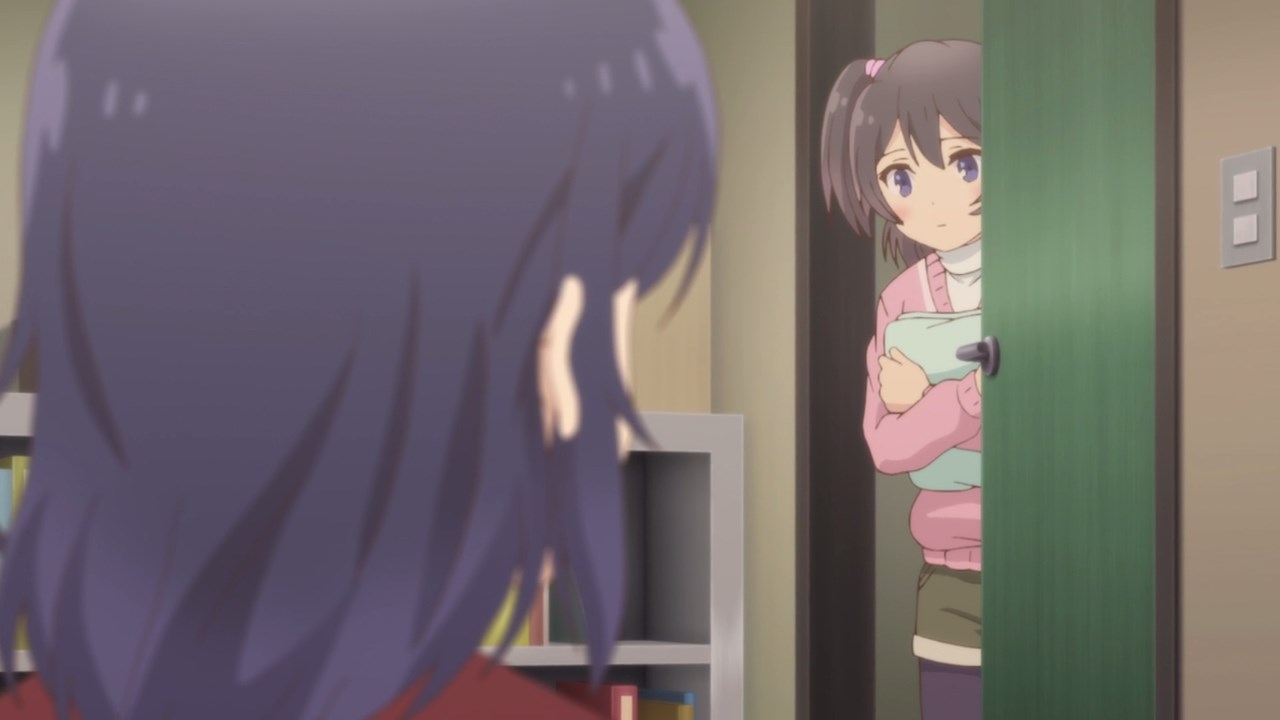 However, there’s Hougetsu’s little sister in which she’s looking at Sakura Adachi. So much for Adachi kissing her best friend. 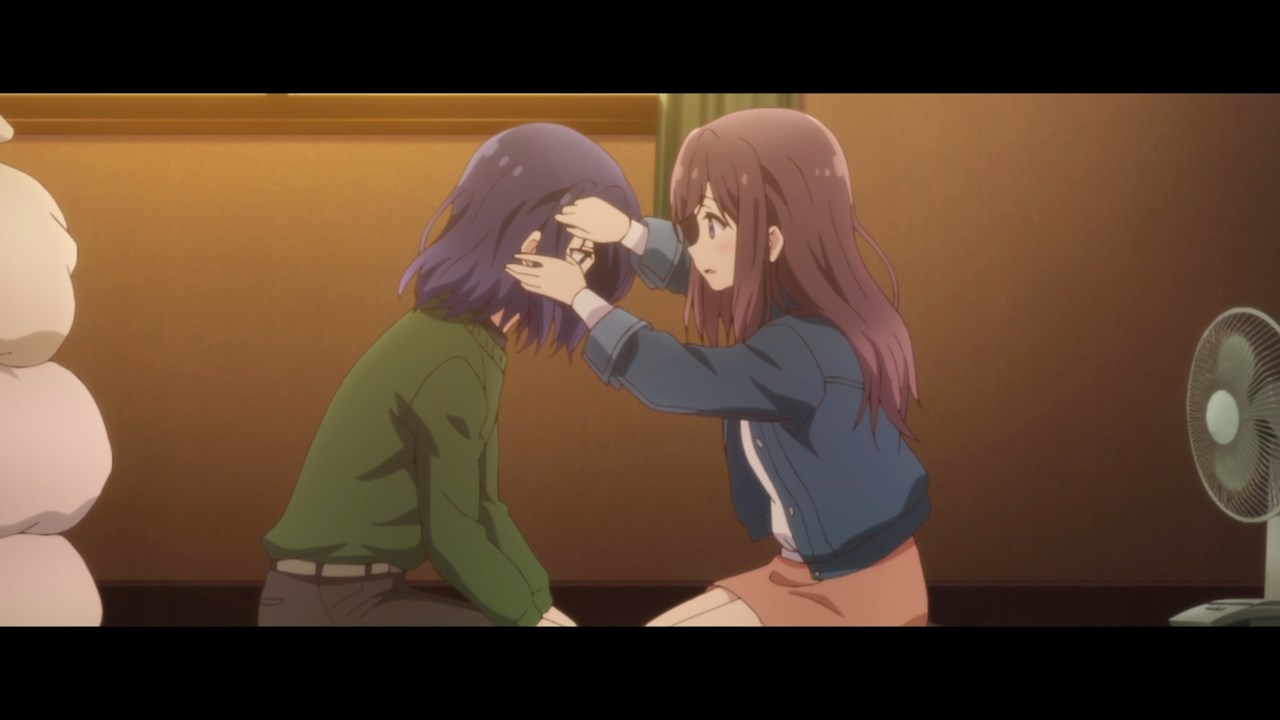 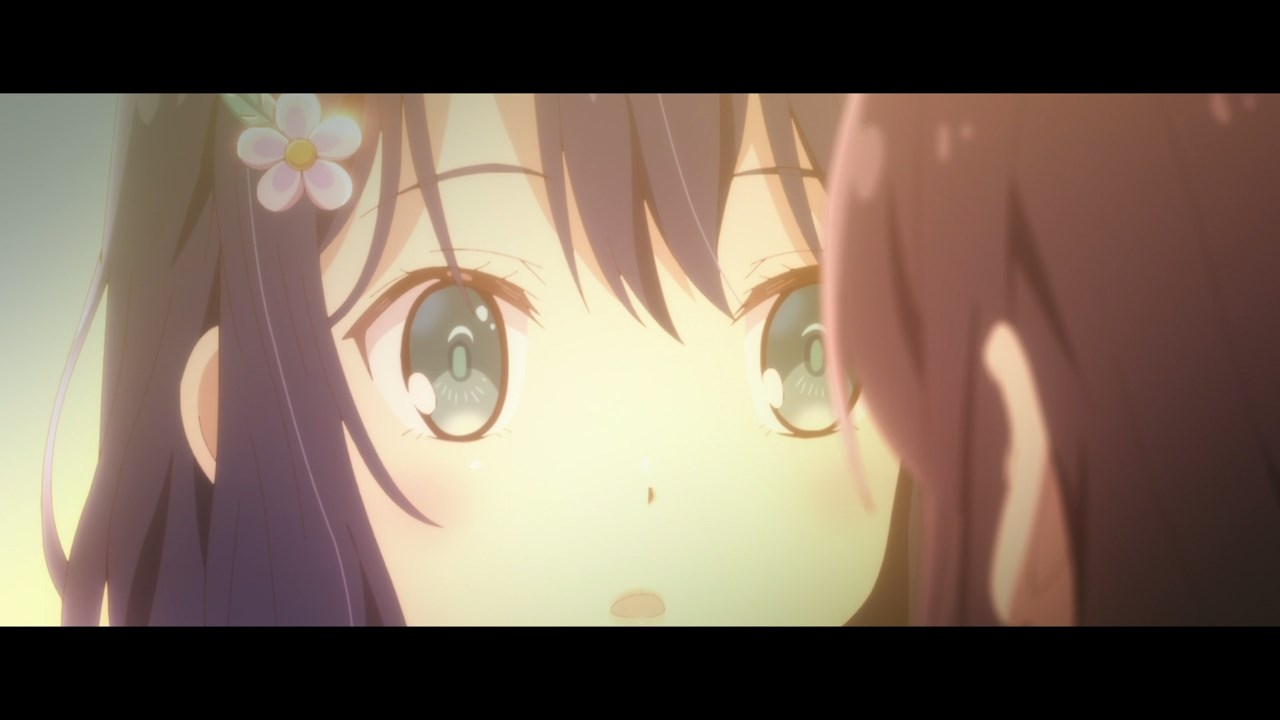 On the other hand, Shimamura gave a cute hair clip to Adachi as a gift. That’s great and all but what’s so special about it? 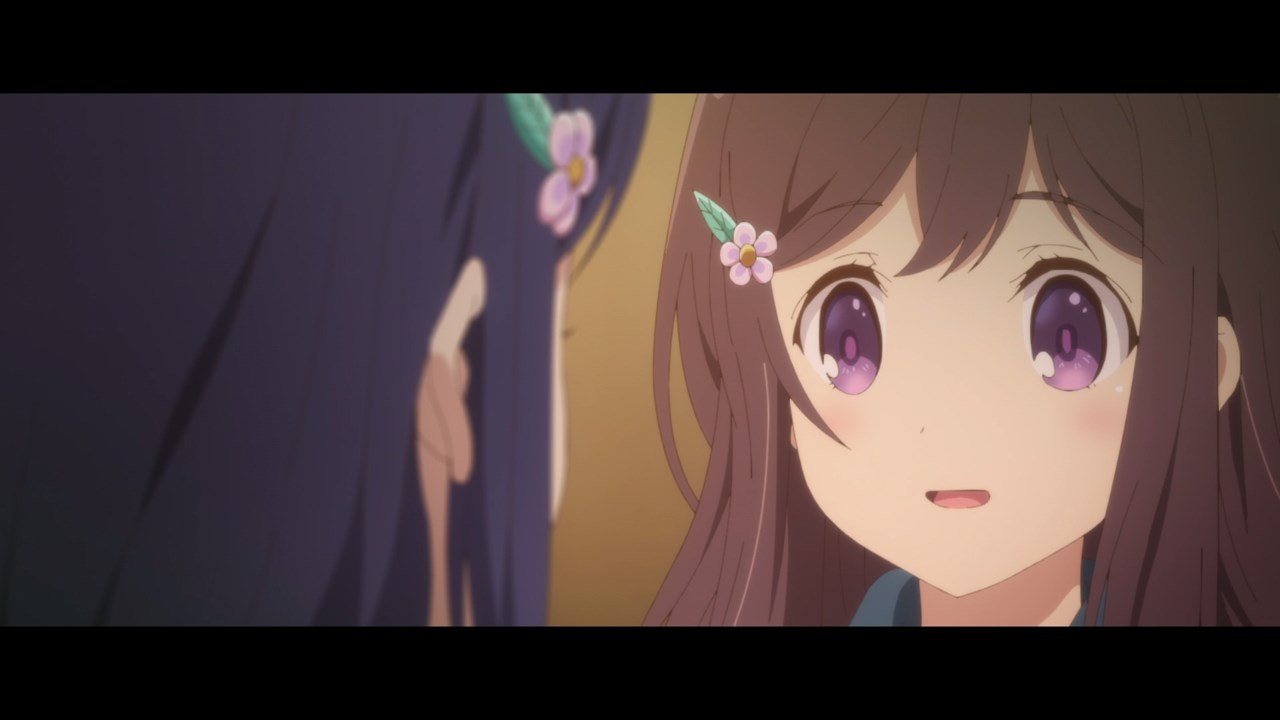 Turns out that both Adachi and Shimamura are wearing the same hair clip, which is basically a matching pair. That’s so very considerate coming from Shimamura. 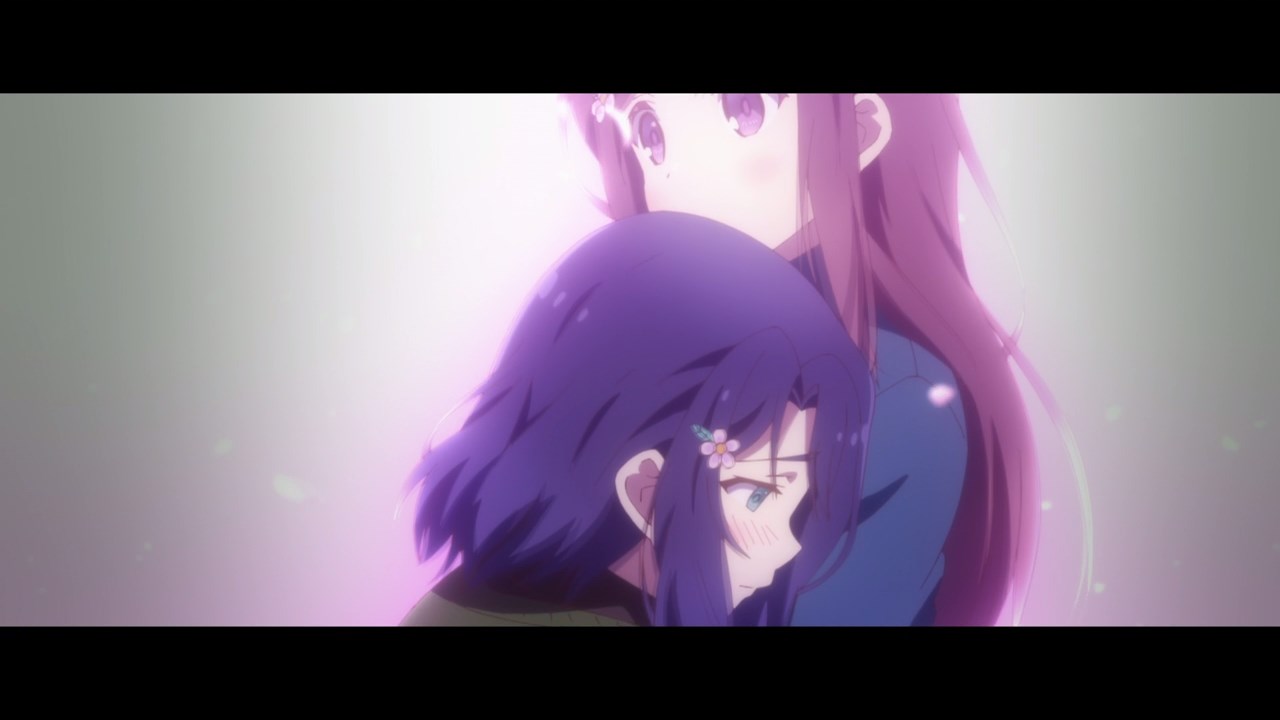 But as for Adachi, she’s very happy that she has the same accessory as her best friend that Adachi hugged Shimamura tightly.

While I have to say that it’s really sweet for Adachi hugging Shimamura, I was hoping that she would declare her love to her best friend. However, it didn’t happen. 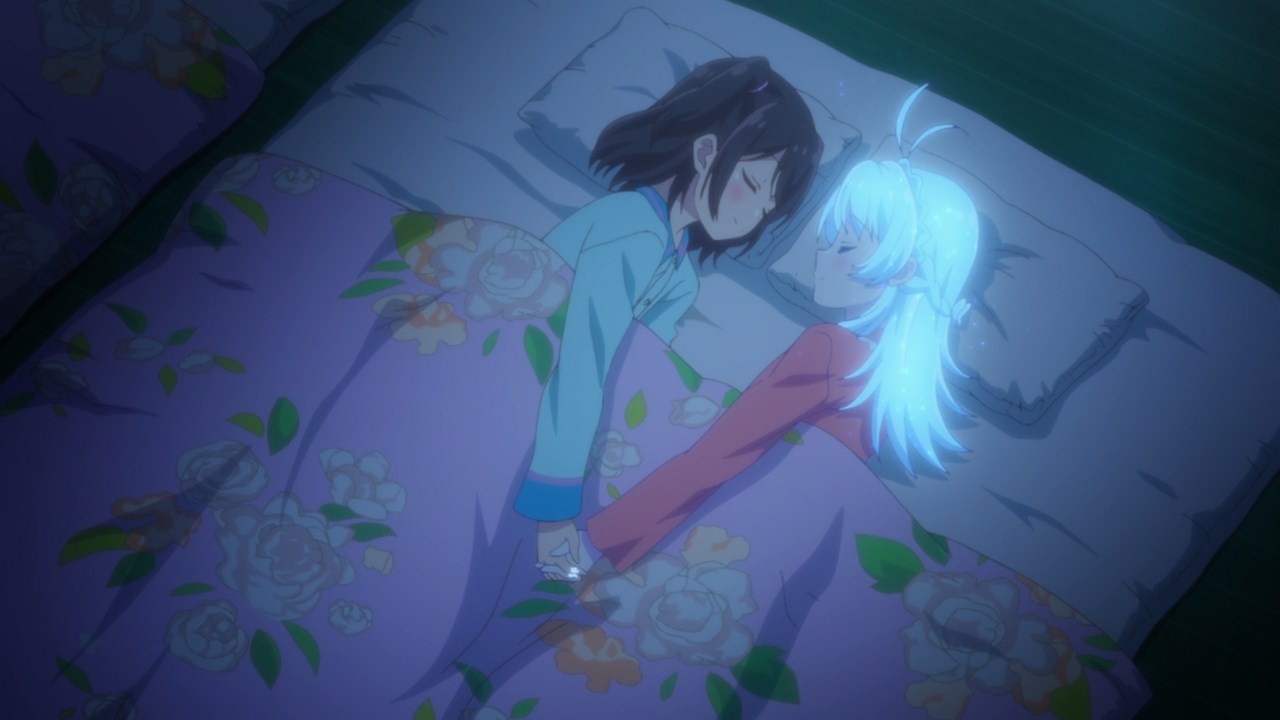 You know something, I feel that Yashiro finally found her companion. However, Hougetsu Shimamura won’t let Chikama take her little sister away to outer space. 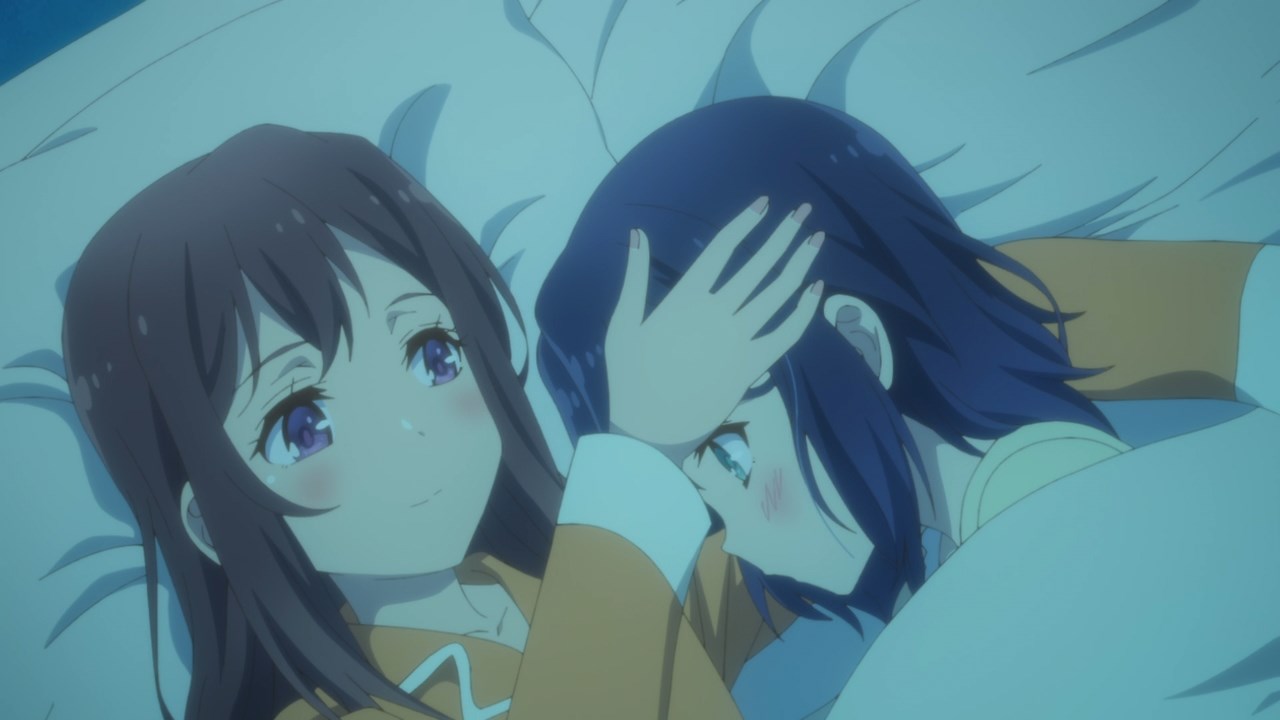 On the other hand, here’s Sakura Adachi where she’s using Hougetsu Shimamura’s left arm as a pillow. Gotta say that Adachi really wants to sleep beside Shimamura. 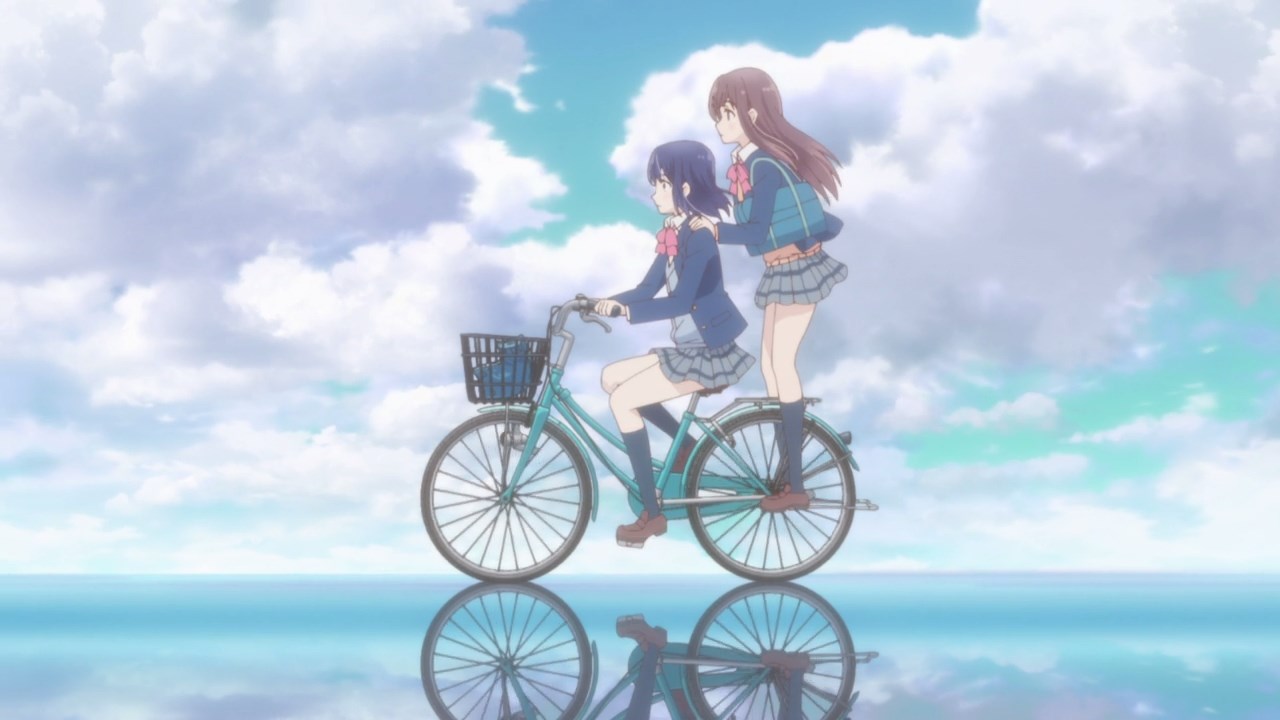 Well then, that’s the end of Adachi to Shimamura and I have to say that this show is so wholesome, especially when Adachi tries to get close to Shimamura whatever she can. Too bad that her feelings won’t reach to Shimamura for the time being.

Meanwhile, the supporting cast are somewhat interesting but I feel that they need more love like the Taeko Nagafuji/Akira Hino pair since they’re cute together, as well as Tarumi where she has the potential to be a rival to Adachi. Oh yeah and about Yashiro Chikama, I think she shouldn’t get sidetrack with various things as she has a mission to do, although I Yashiro is becoming more like an ordinary girl rather than an alien.

Aside from the characters, looks like Tezuka Productions did a great job on the anime adaptation, although I wish that there will be more of this show instead of serving as a one-off promotion to the light novels. But anyways, time to say goodbye to Sakura Adachi and Hougetsu Shimamura!