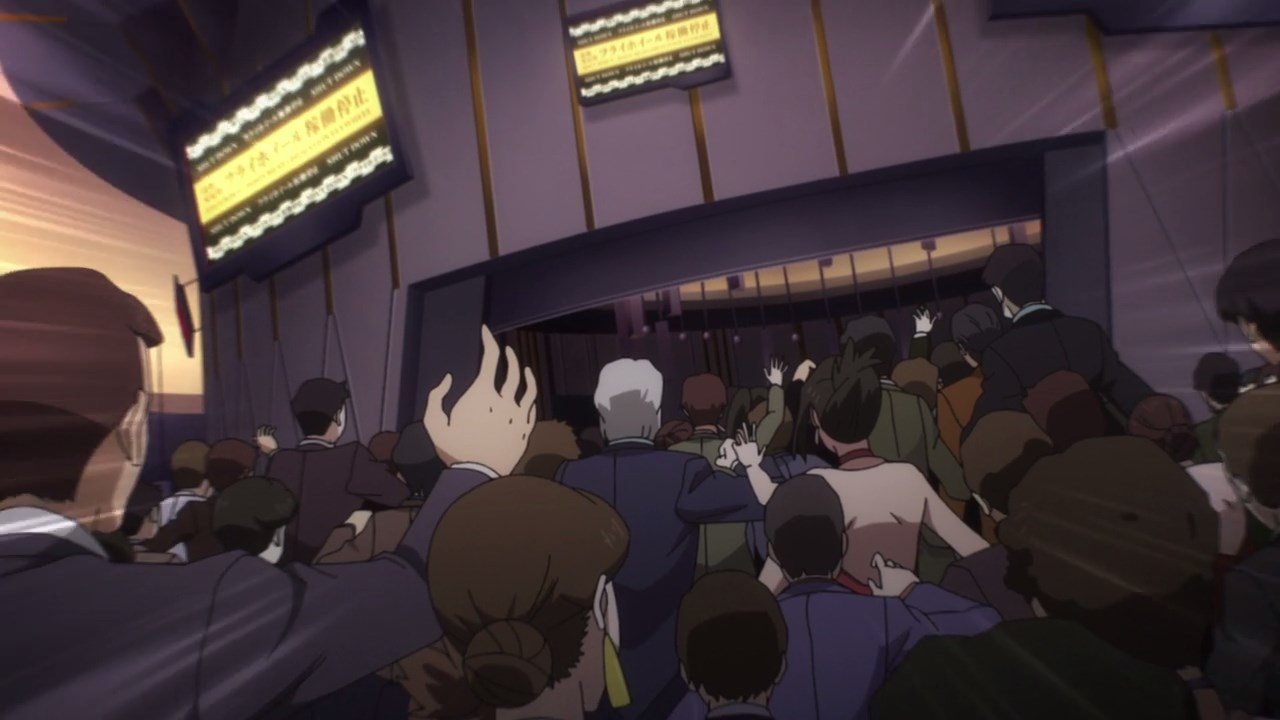 It looks like people are panicking because the terrorist group took control of the Tokyo Offshore Tower. Man, if only they should calm down and enter the elevator safely. 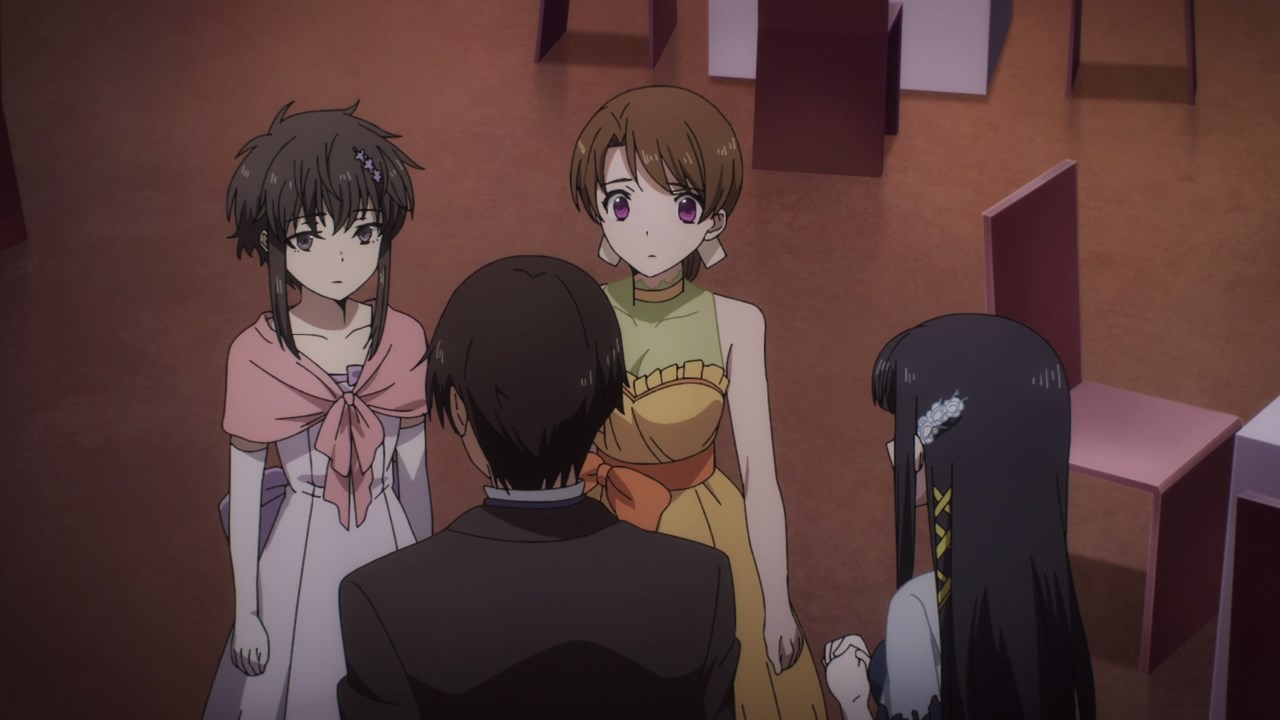 Of course, Tatsuya Shiba and his friends won’t do that as he told Shizuku Katayama and Honoka Mitsui to take these flight devices and fly down to safety in case of emergency. 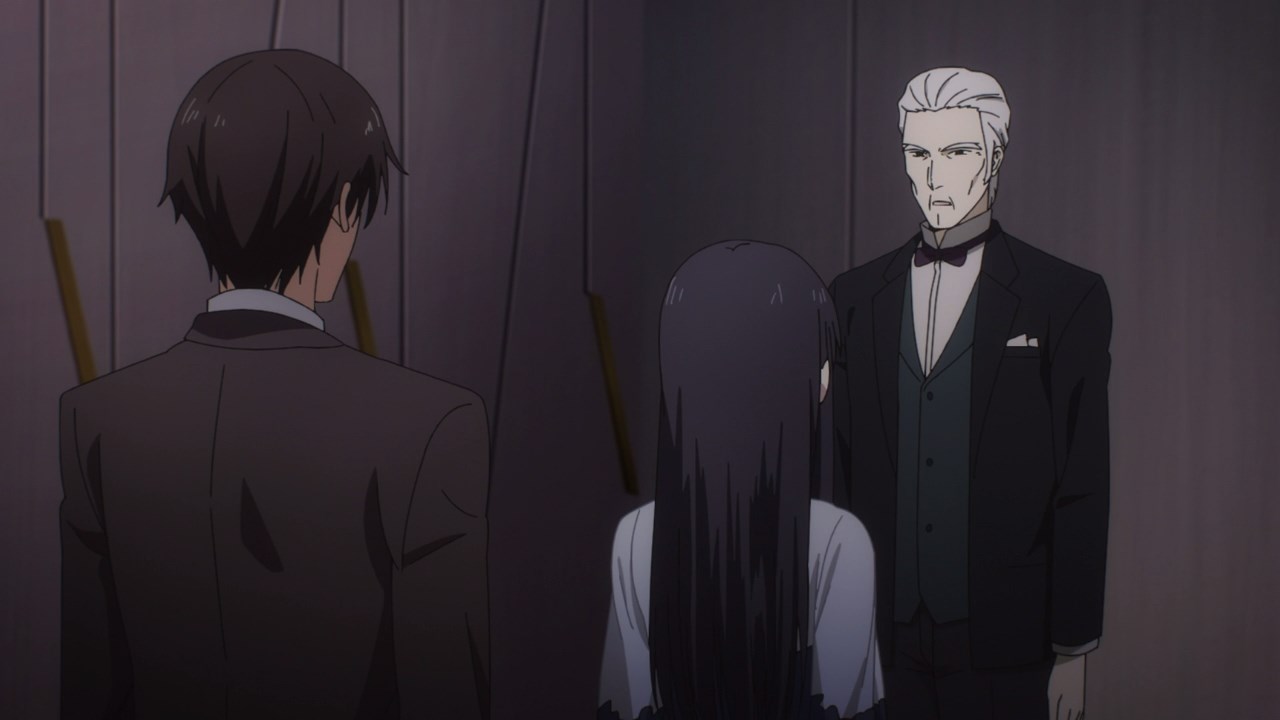 Meanwhile, Tadanori Hayama told Tatsuya to protect the building as much as possible. It’ll be bad if the Tokyo Offshore Tower collapsed and cause a major disaster in the city. 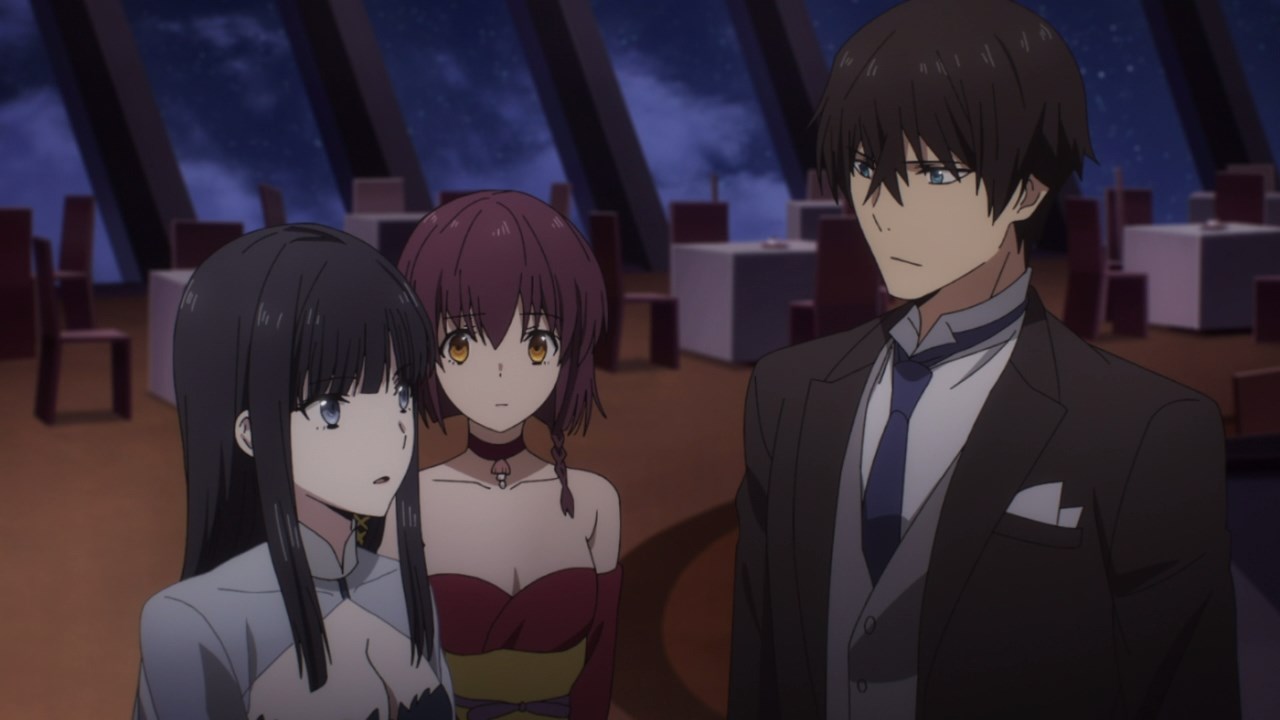 Also, the head butler told the Shiba siblings to take Minami Sakurai with them as she’s capable of defending Miyuki when danger arrives.

Still, the only thing that concerns me is how will they go down and deal with those terrorists underground since most of the guests are using elevators? 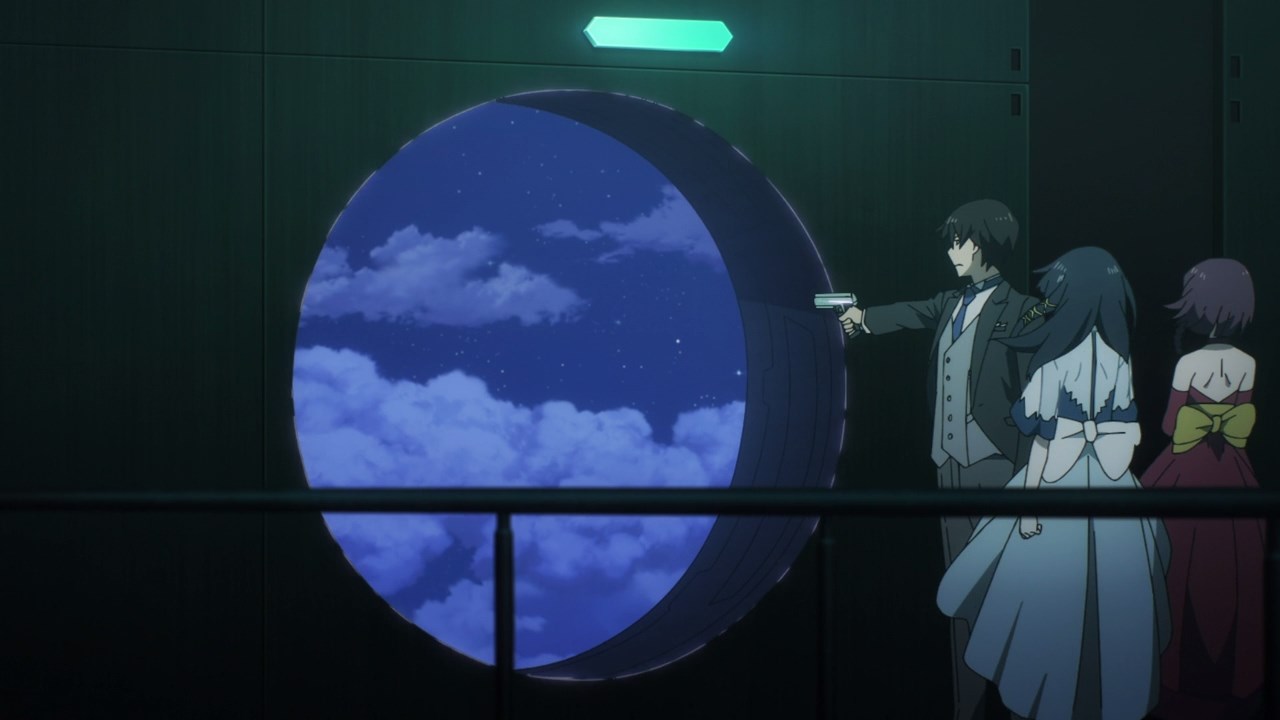 Simple, they’ll just jump from the top of the tower as Tatsuya created a hole by shooting at the wall. Um Tatsuya, it’s a bad idea to jump from a 300+ storey building. 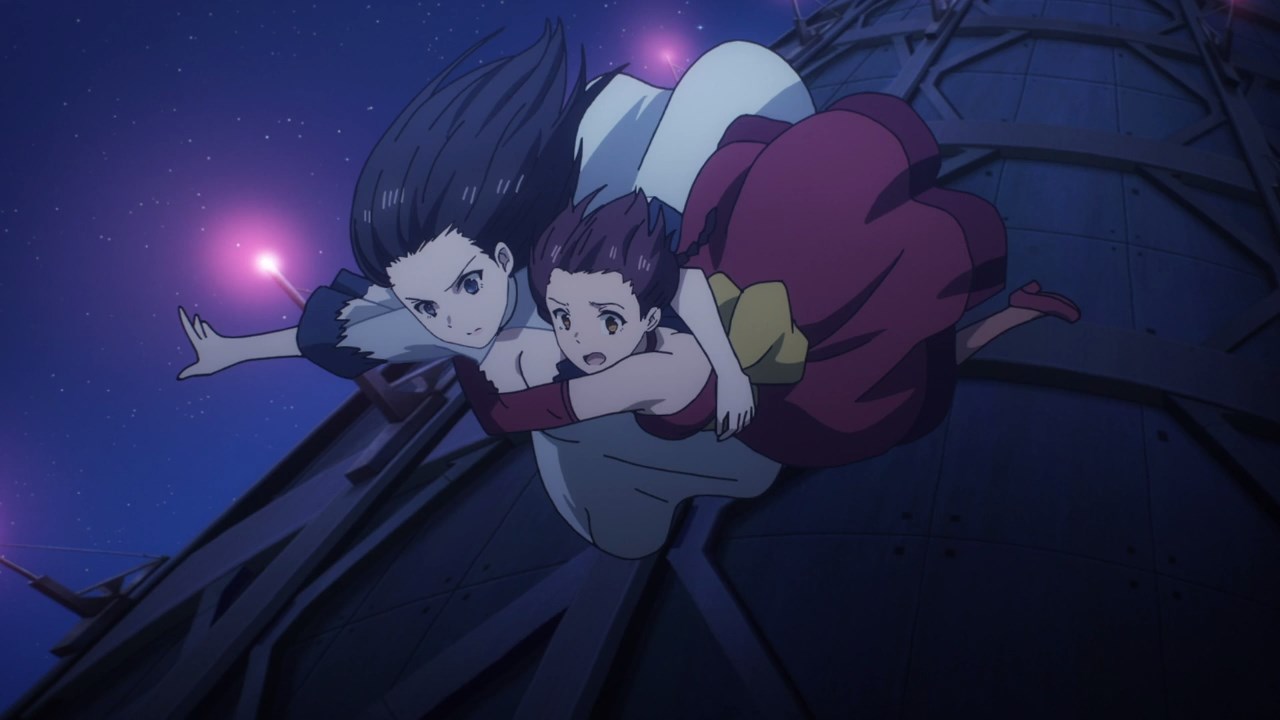 Regardless, they’ll do it anyway as they jump down without any flight devices. Even Minami is scared of being killed upon dropping down at high speeds. 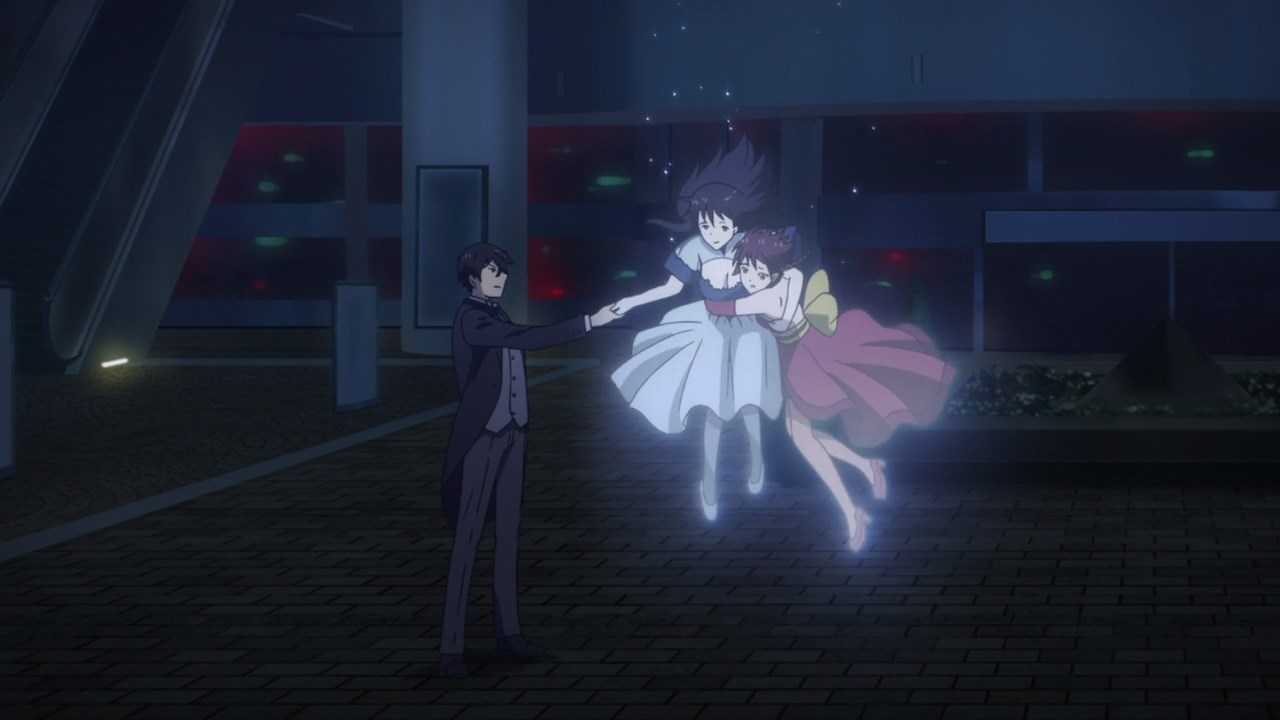 Luckily, Tatsuya can safely land on his feet and catch both his sister and Minami with his magic powers. Now that they’re on the ground, it’s time to stop those terrorists. 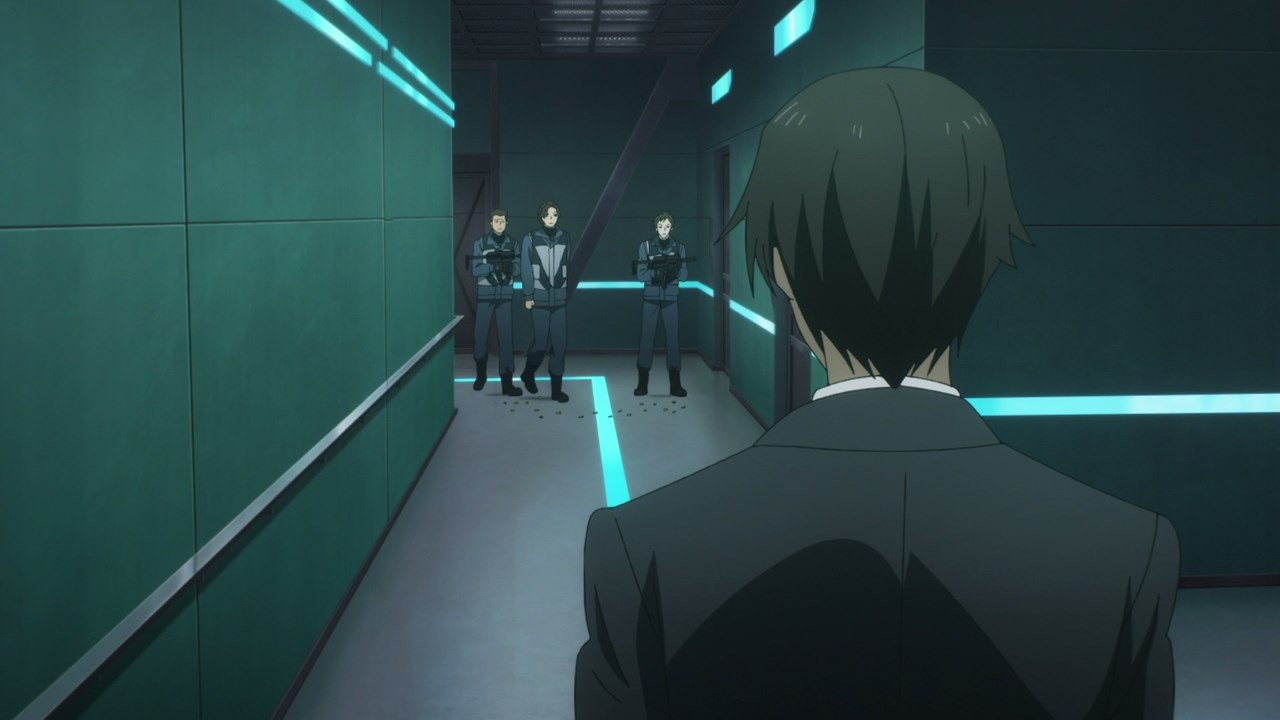 Of course, Tatsuya Shiba won’t just kill the New Breed Front right away as he’ll negotiate with the leader Kan Fehr to let him enter to the control center.

Should the terrorists allow Tatsuya to enter the control center, he’ll restart the power generators within the tower so that both the flywheels and the elevators will become operational. 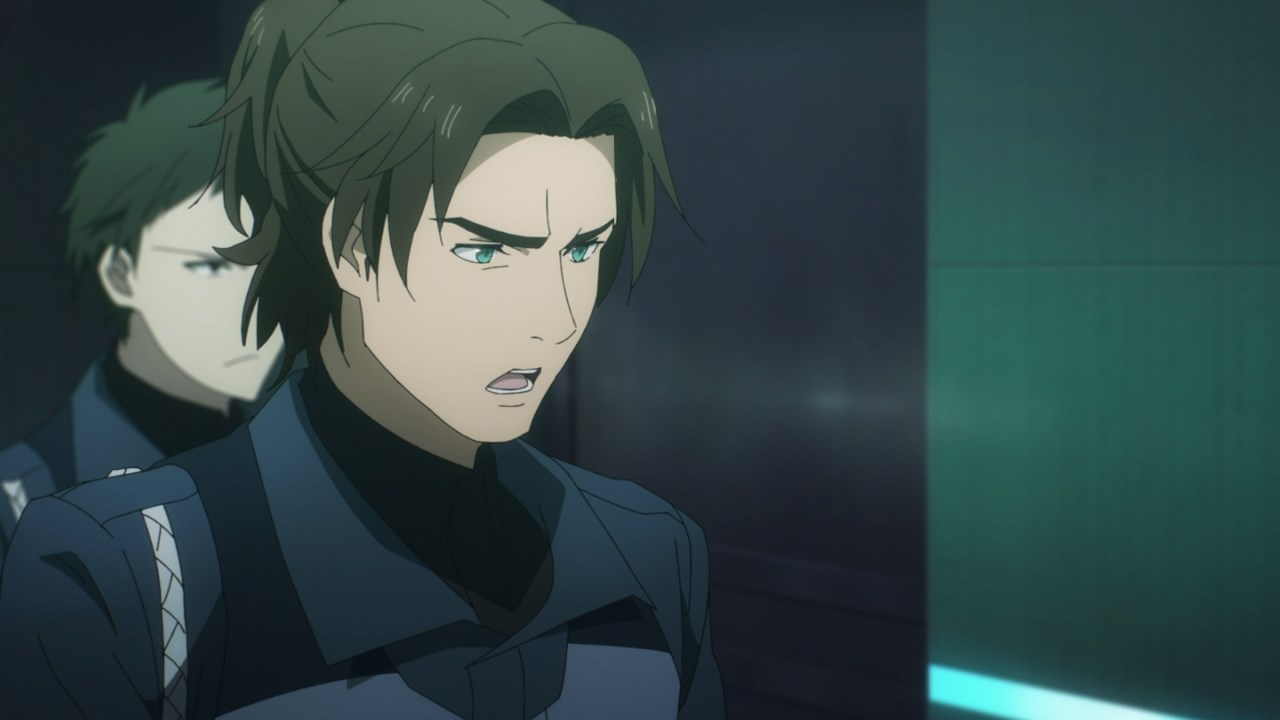 Unfortunately, the leader of the New Breed Front won’t let him enter the command center as Kan Fehr told Tatsuya Shiba to take his leave.

Looks like he’s chosen death then ’cause Tatsuya won’t take no for an answer. 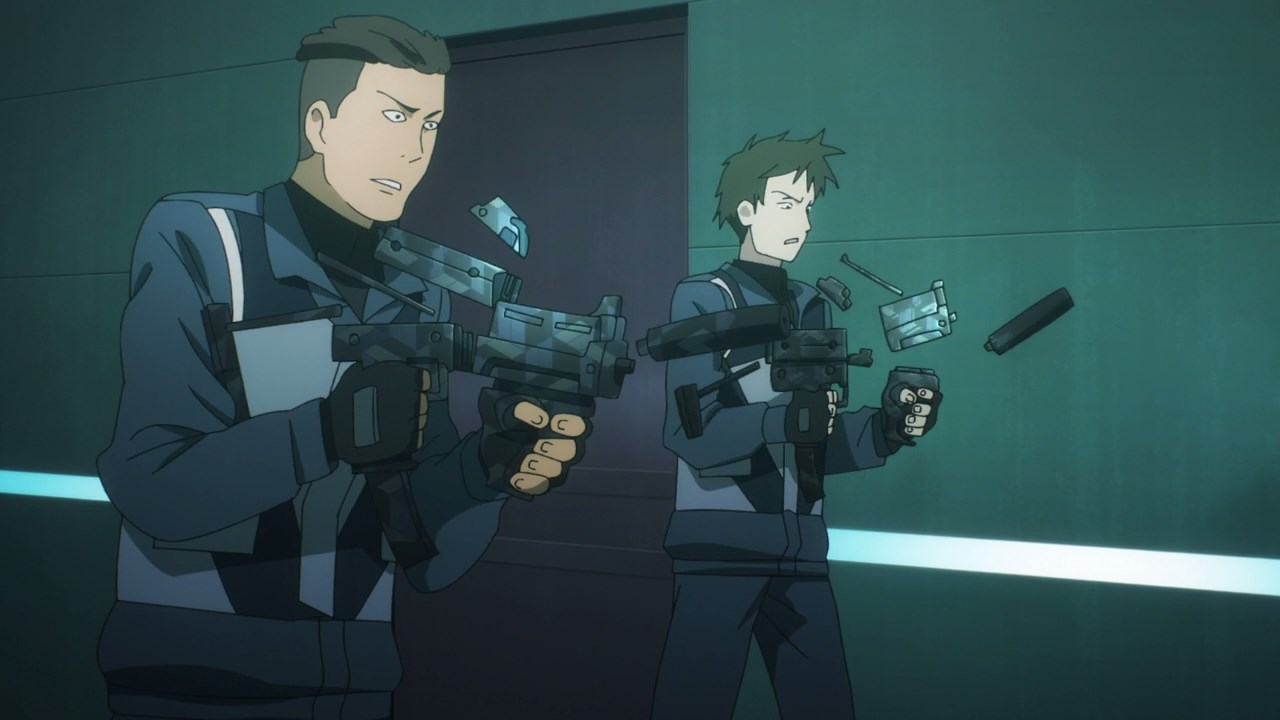 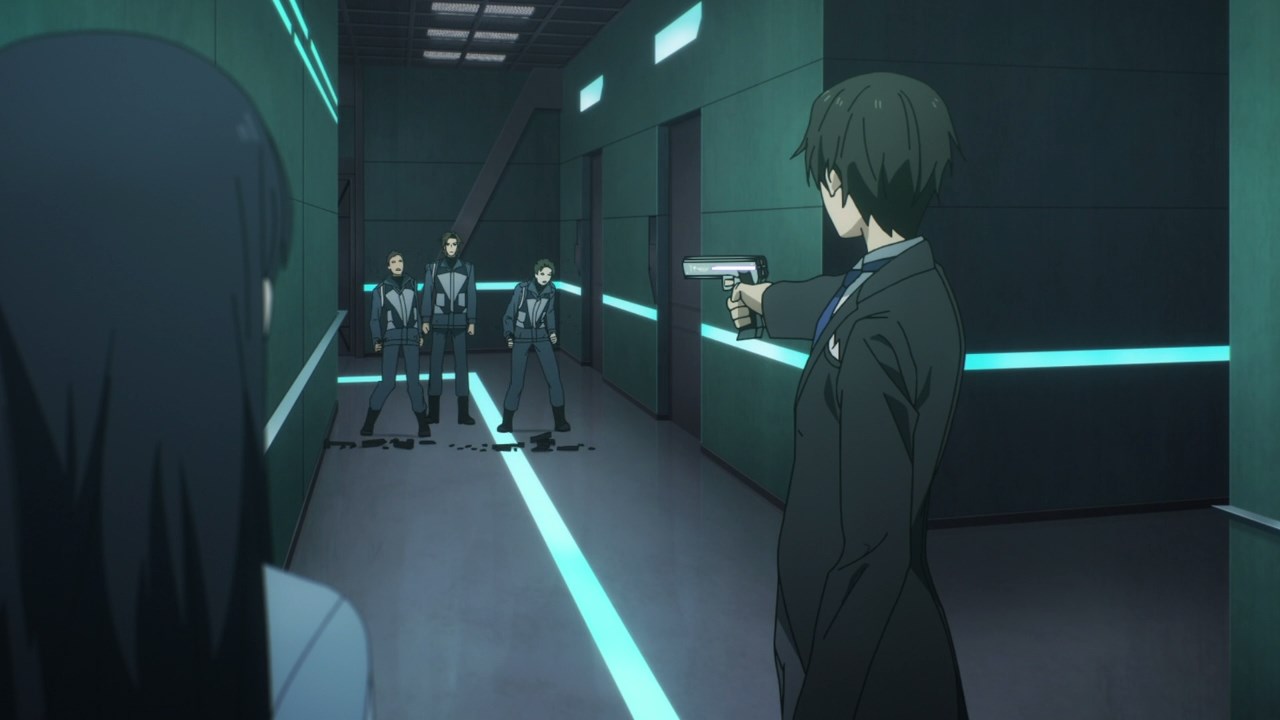 In any case, Kan Fehr’s goons got taken out quickly by Tatsuya Shiba and I have to say that he’s not playing around with the terrorists anymore. 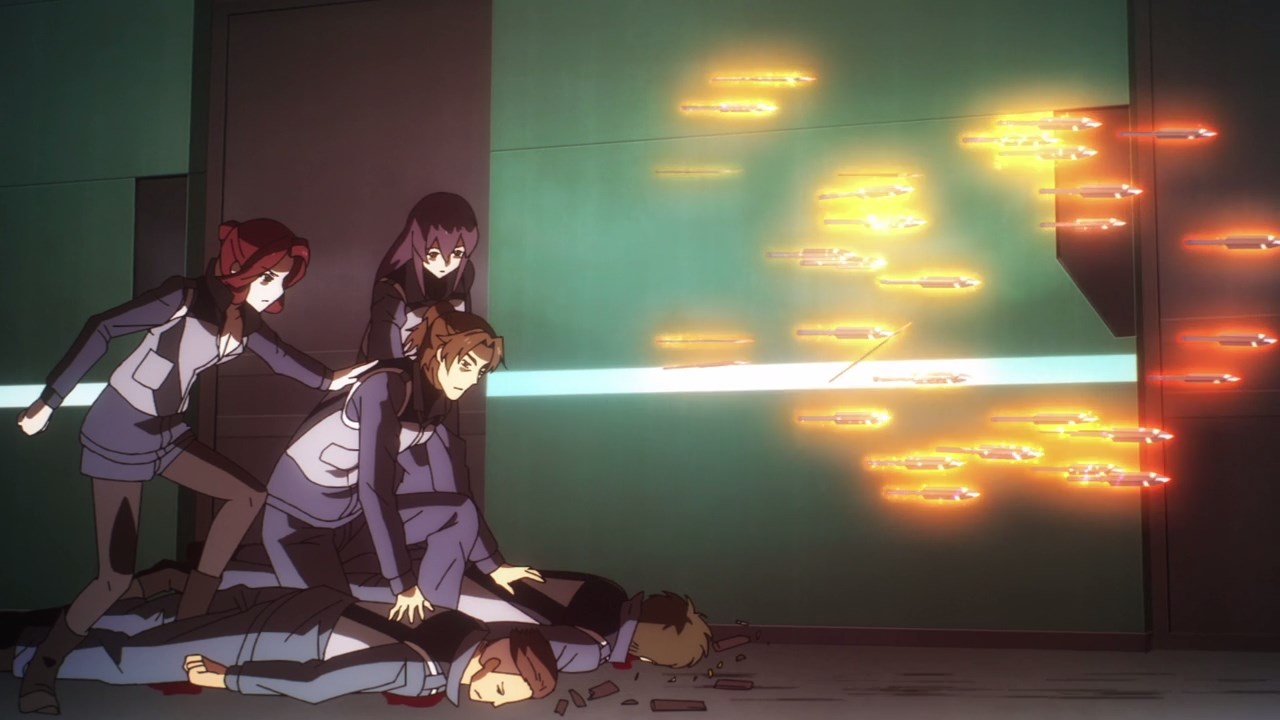 Of course, the New Breed Front won’t give up that easily as these two girls helped Kan Fehr on summoning knives so he can throw at Tatsuya Shiba. 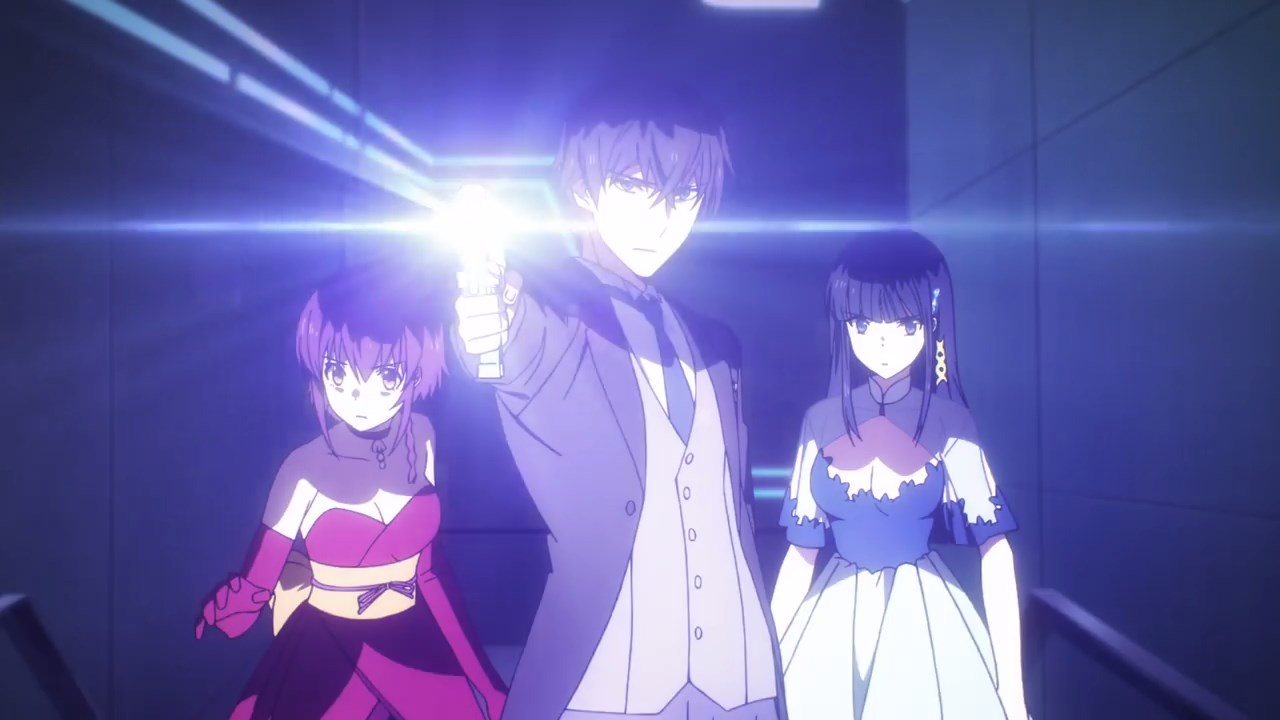 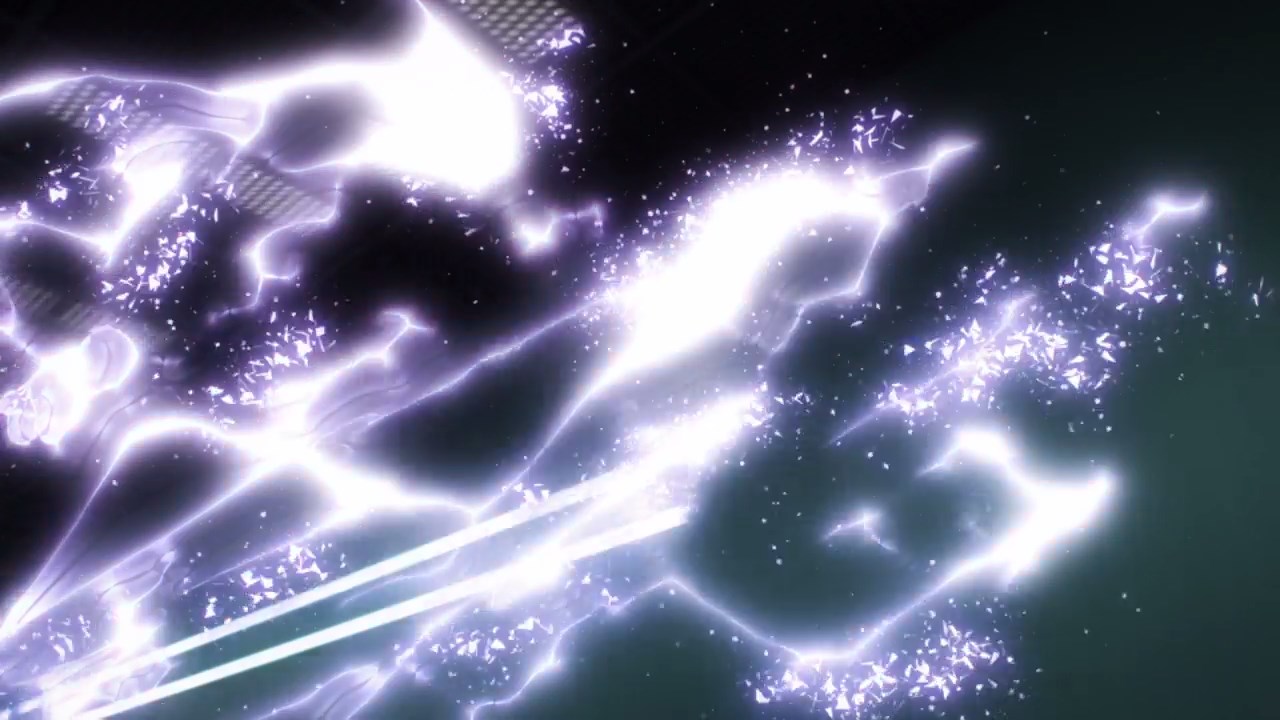 Unfortunately for the New Breed Front, Tatsuya’s CAD Taurus Silver just destroy those knives out of existence. Looks like those terrorists didn’t stand a chance after all. 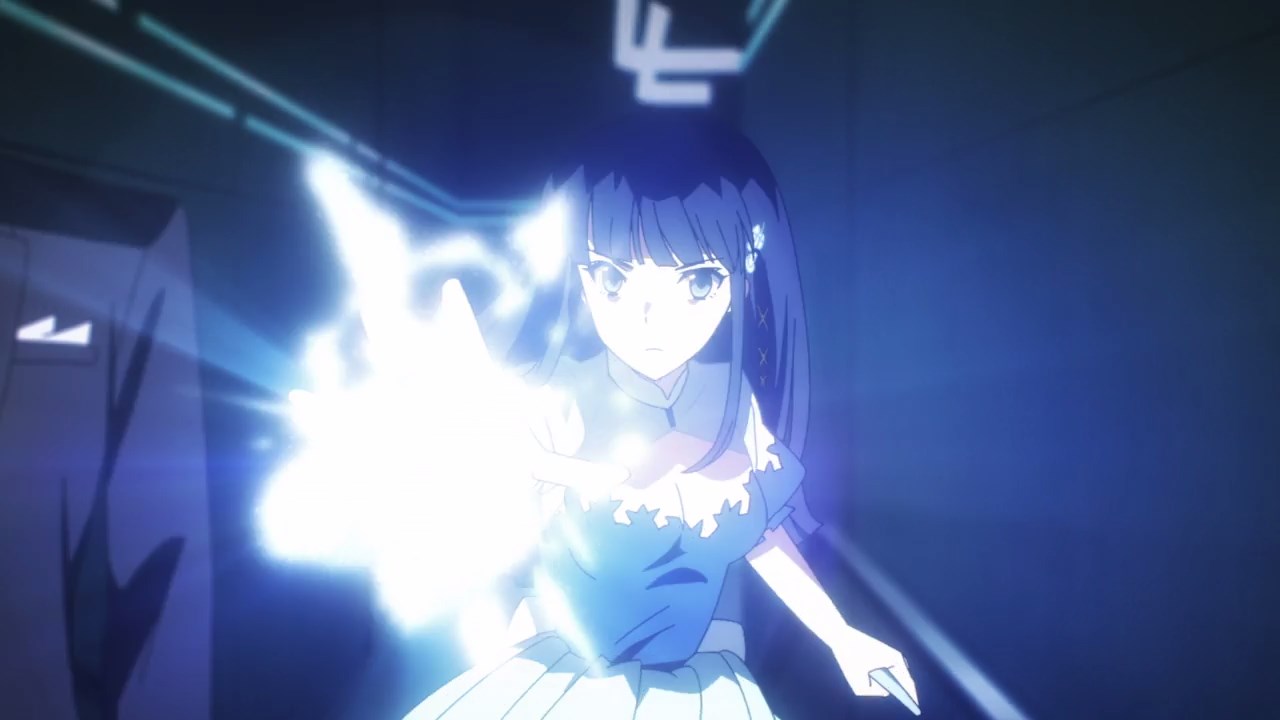 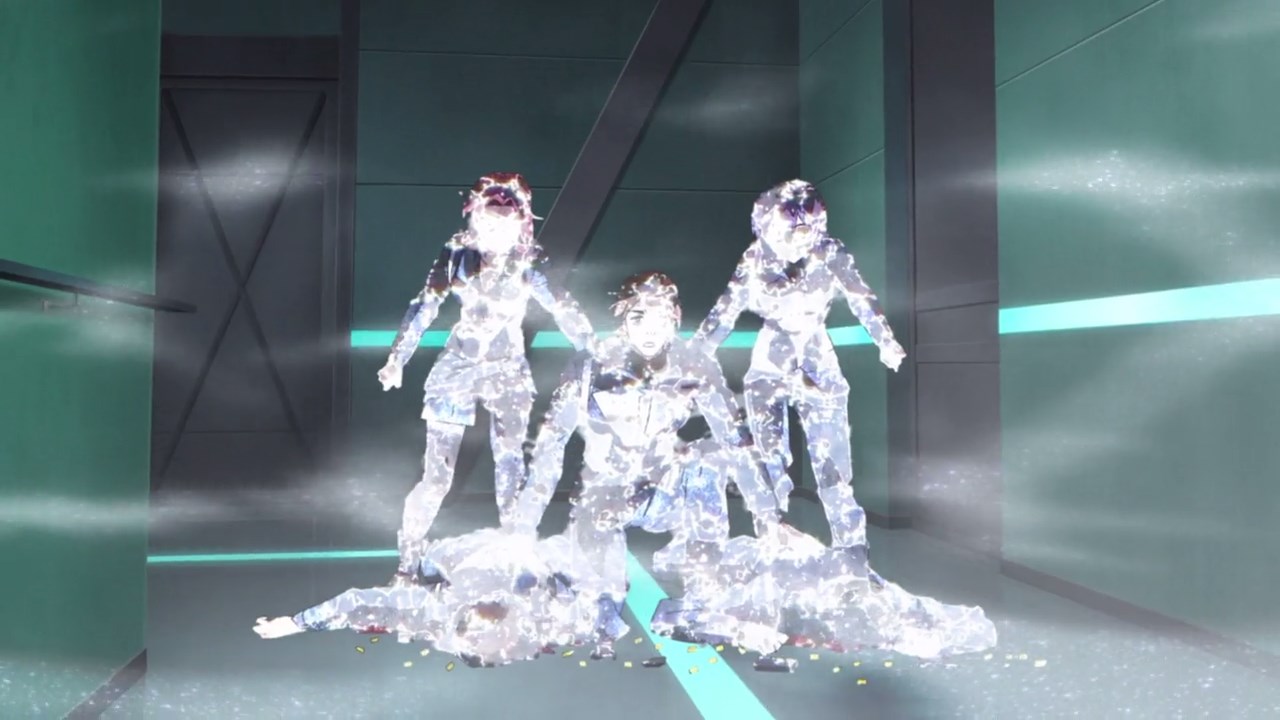 However, Tatsuya didn’t finish the New Breed Front off as Miyuki decides to take care of those terrorists by freezing them. In any case, it’s over. 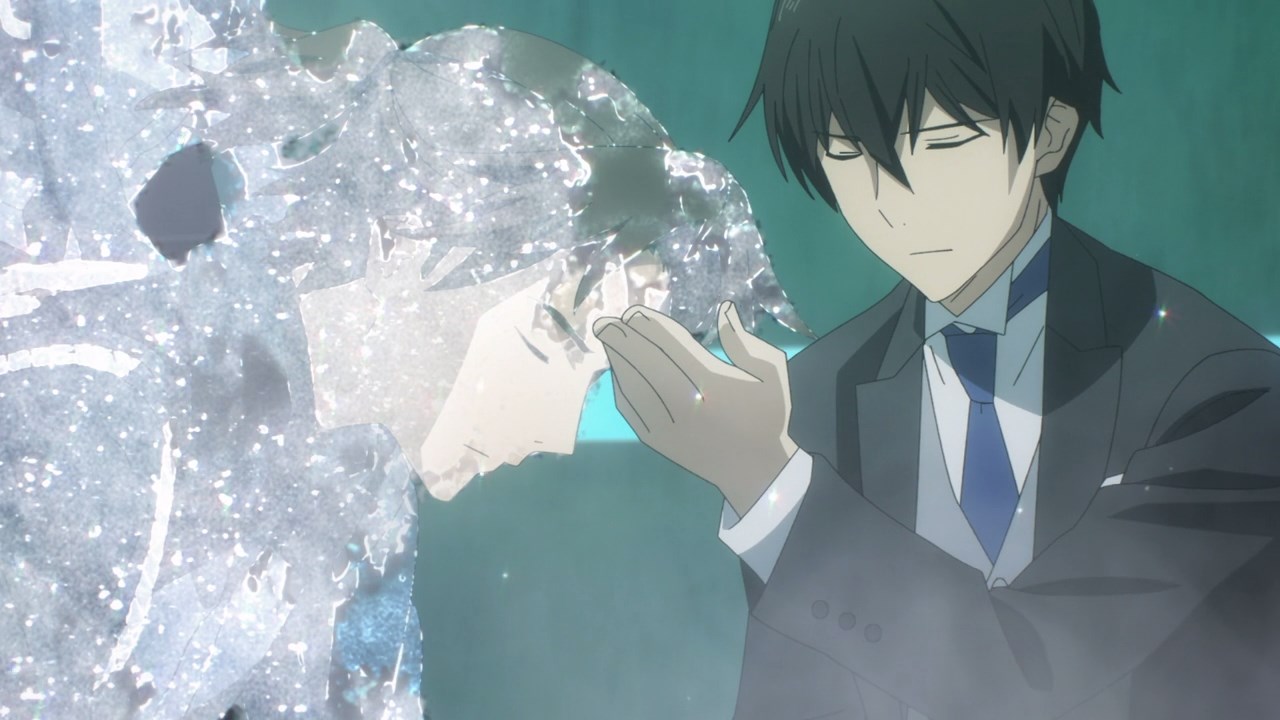 Except that Tatsuya learned that someone cast a powerful spell which will destroy the pillars underneath. Furthermore, he learned that Kan Fehr’s real name is Hiroshi Misaki and he’s not the one who cast the destructive spell.

You know something, I feel that the New Breed Front is being controlled by a powerful magician, possibly Jiedo Sage Heigu. Then again, we’ll never know the truth. 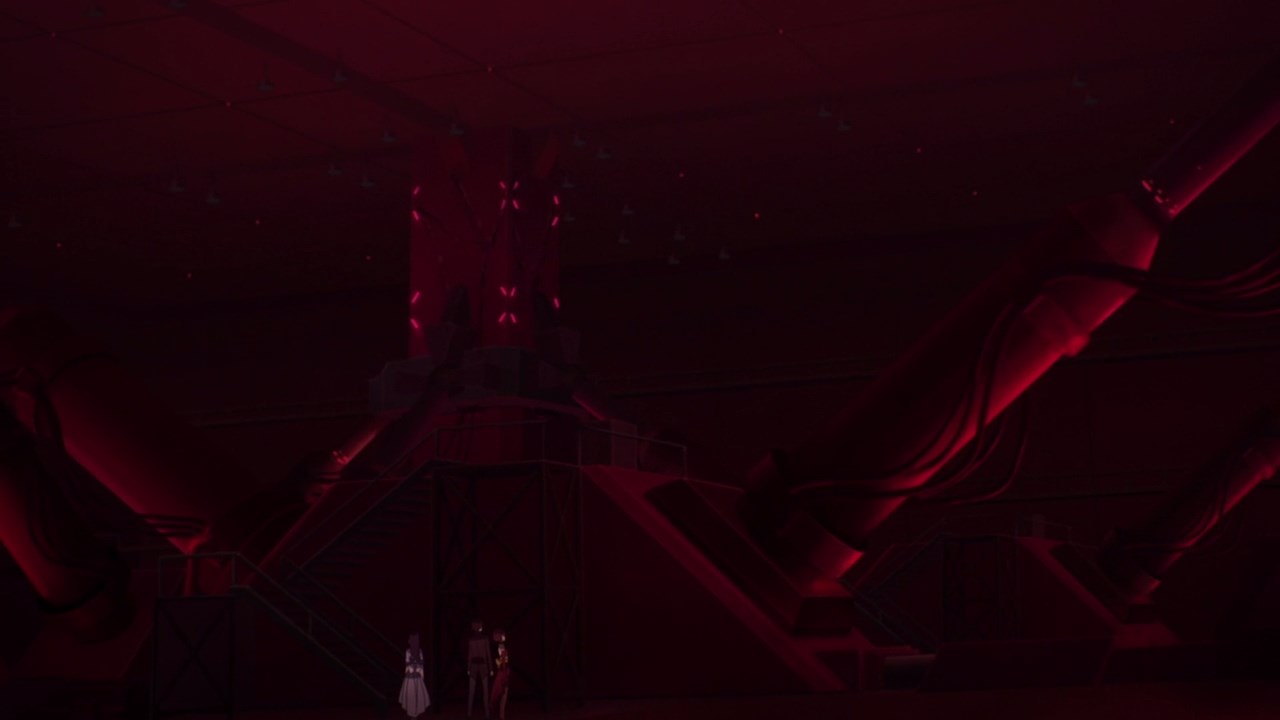 For now, let’s focus on stopping the pillars’ destruction. Unfortunately, it appears that it suffered significant damage that the Tokyo Offshore Tower might collapse soon. 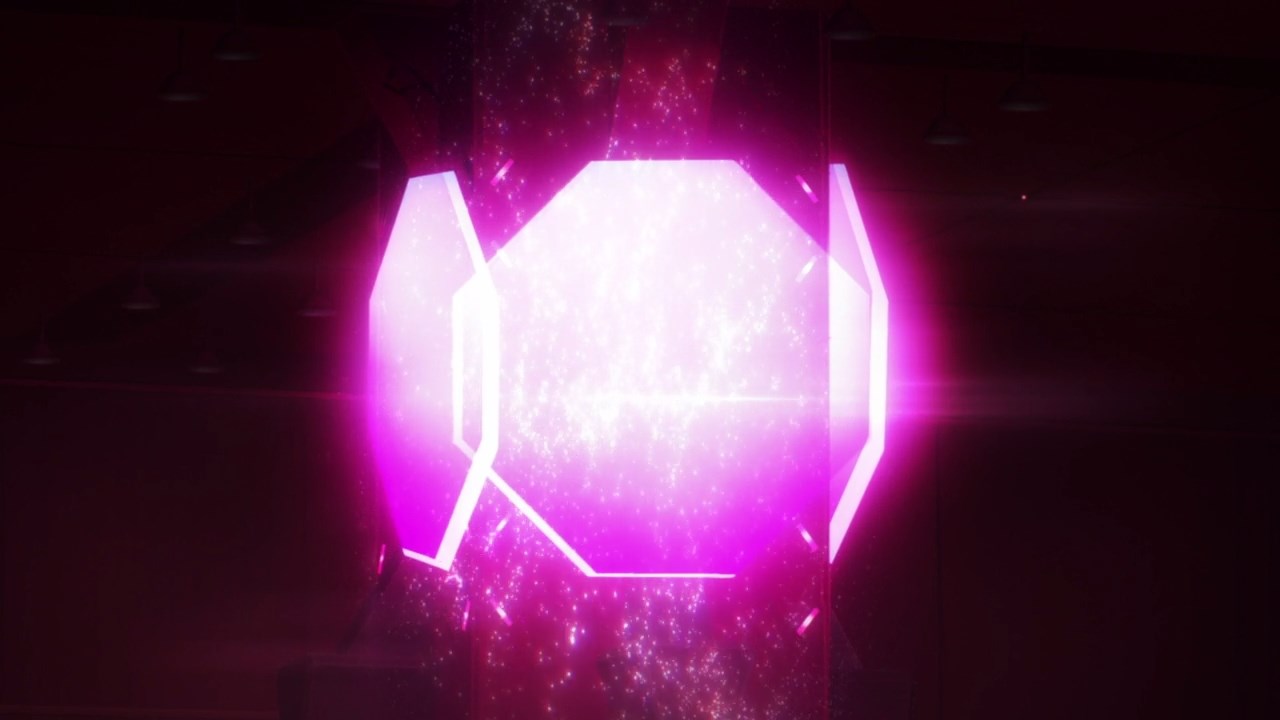 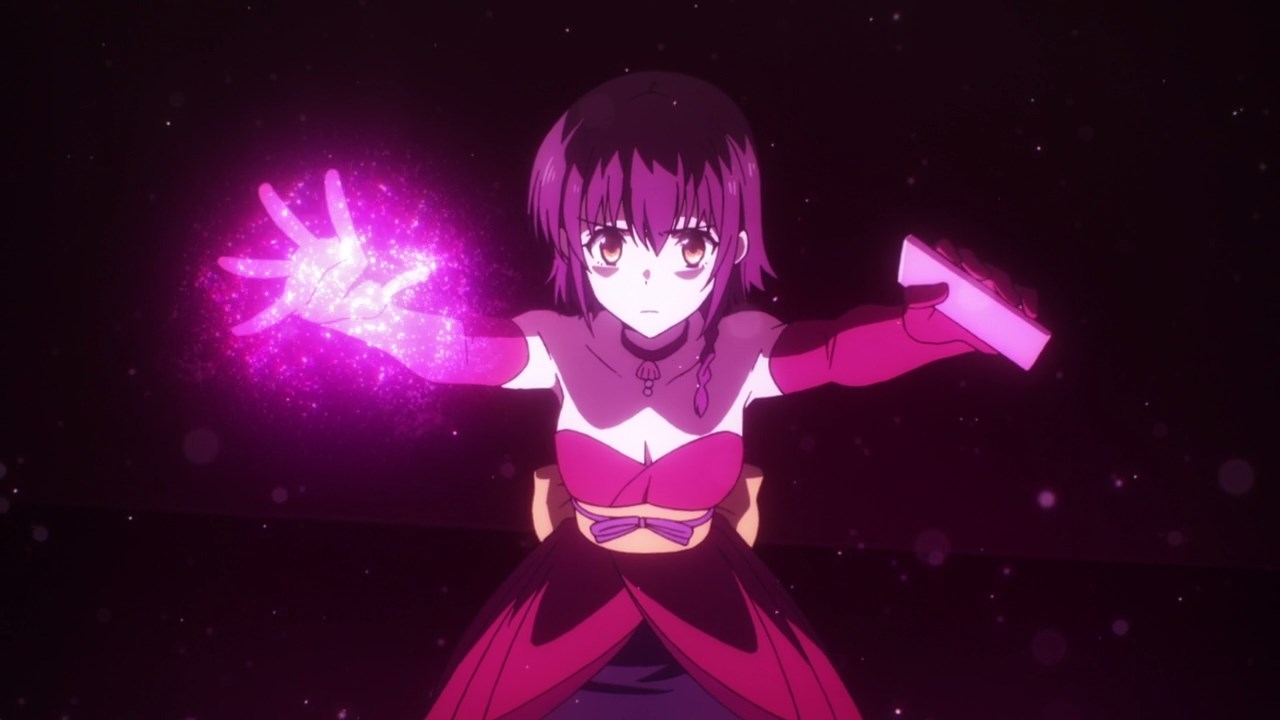 Oh and by the way, Minami Sakurai’s barrier magic won’t work at all as she can only support one pillar. At this point, the New Breed Front got the last laugh. 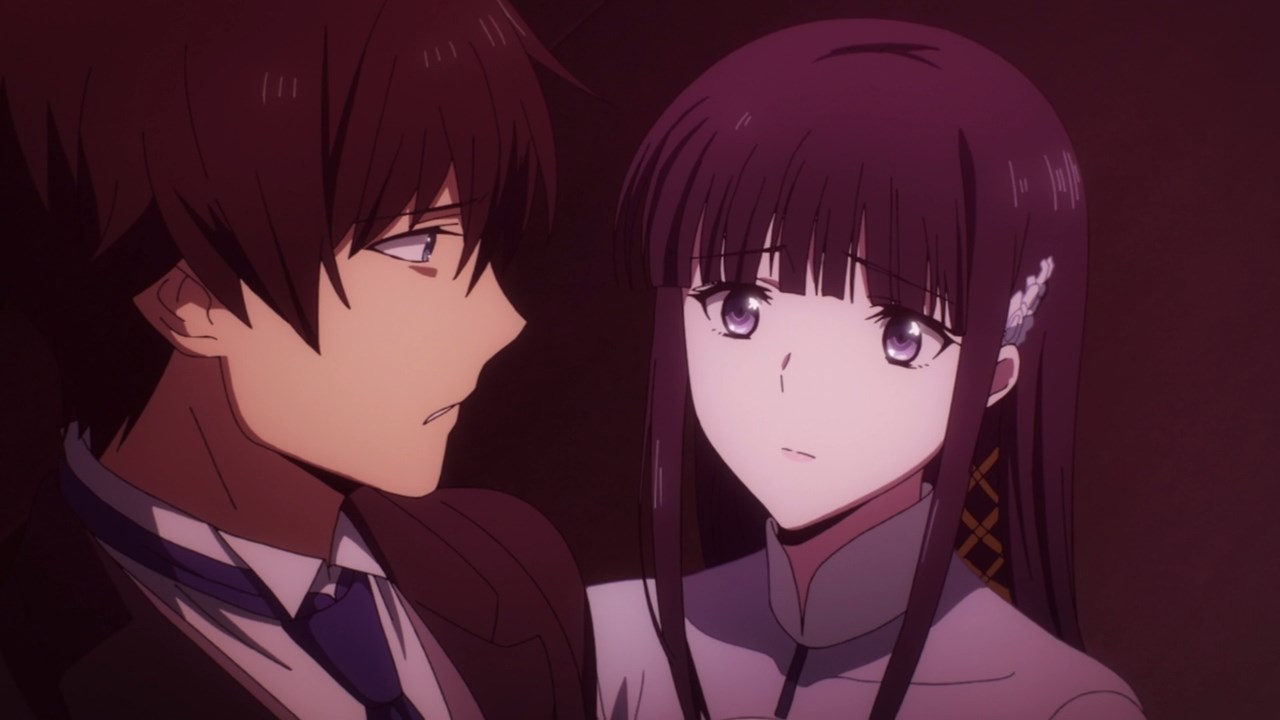 Of course, Miyuki doesn’t want everyone getting killed inside the collapsing tower as she wants her brother to do a miracle. Oh don’t worry Miyuki, Tatsuya-niisama will pull that one right away! 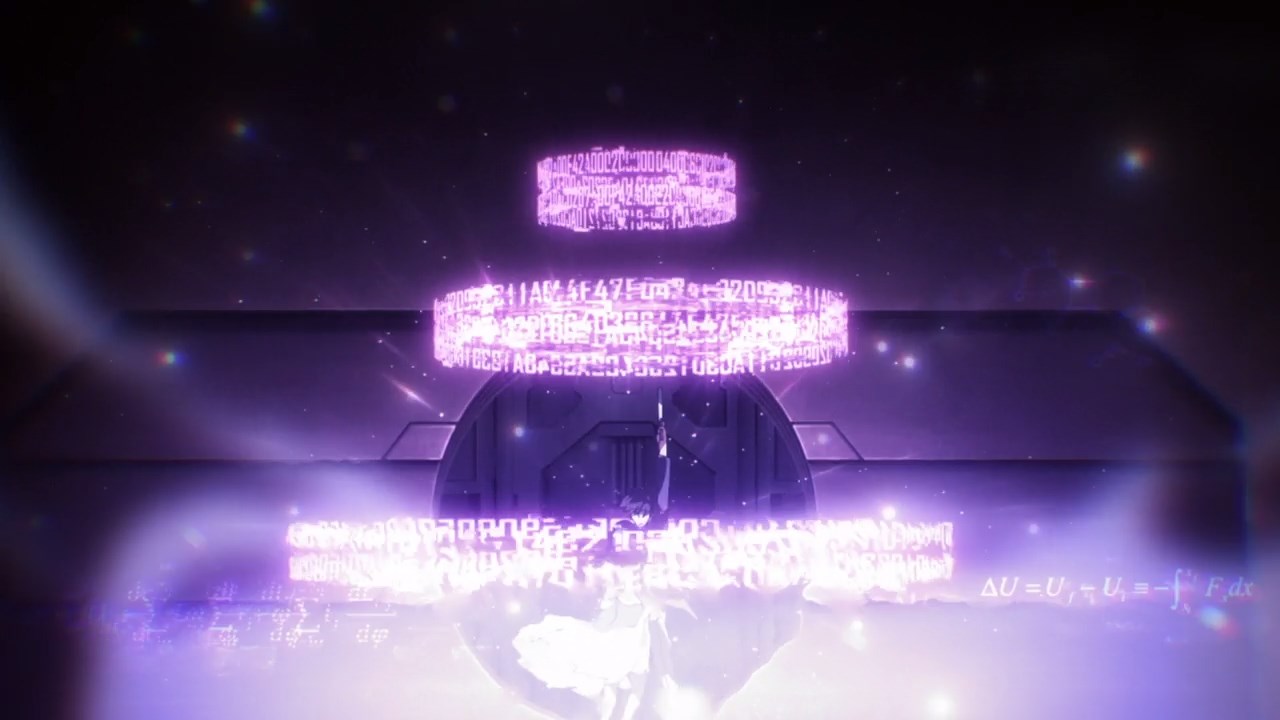 And so, Tatsuya casts Regrowth as he attempts to restore the Tokyo Offshore Tower back to its former glory. Then again, he needs a lot of energy to cast one powerful magic. 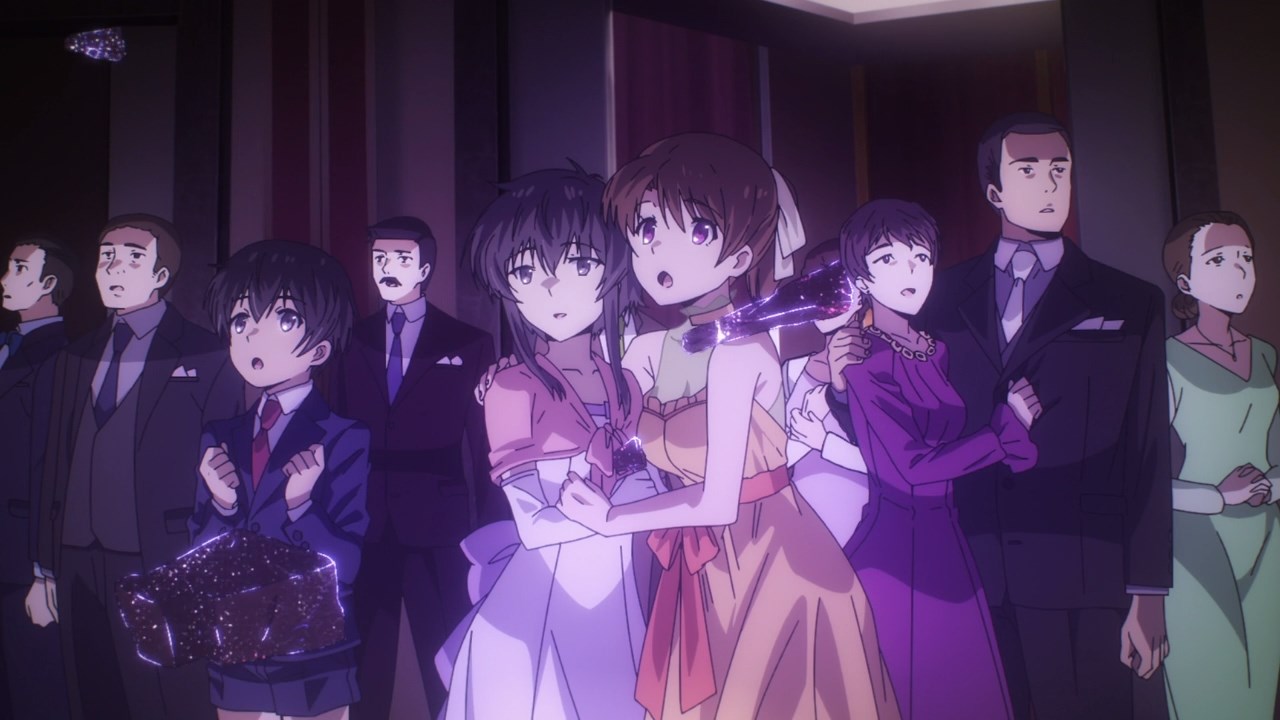 But hey, it seems that his spell is working as the damage is being undone both the inside… 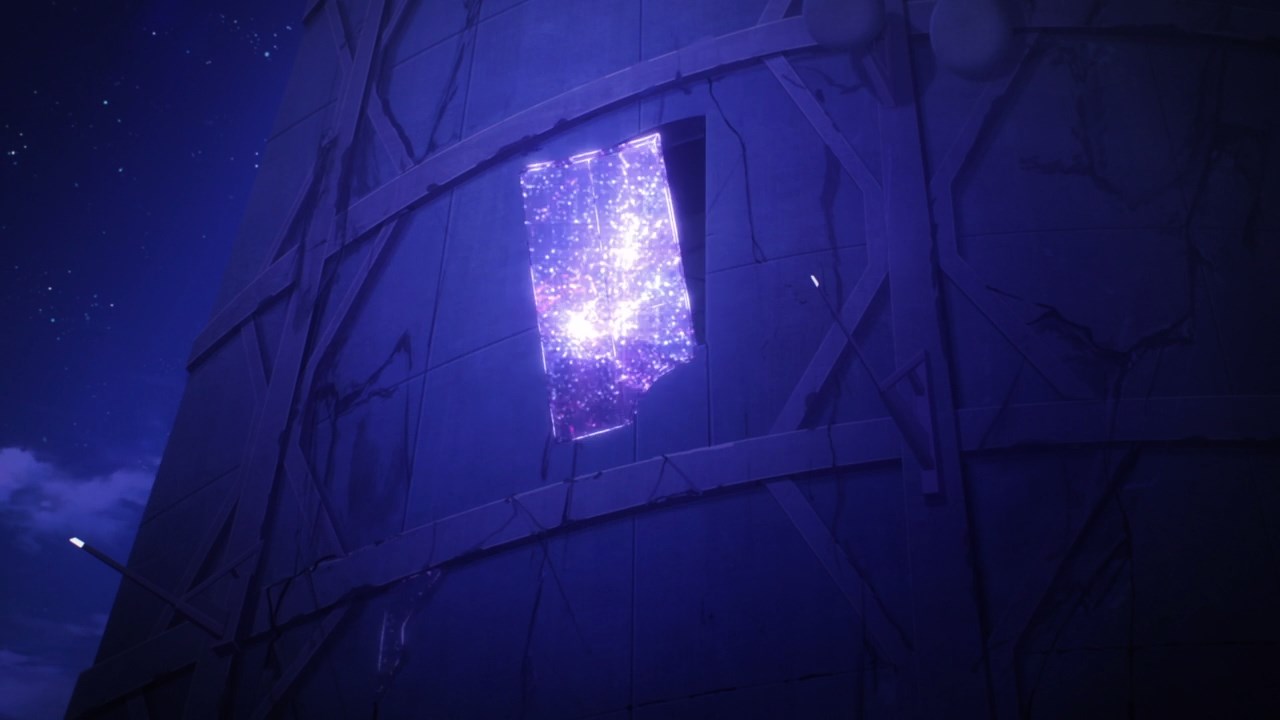 …and outside. As expected from Tatsuya, he really can pull such amazing feats despite being branded as a weed initially. 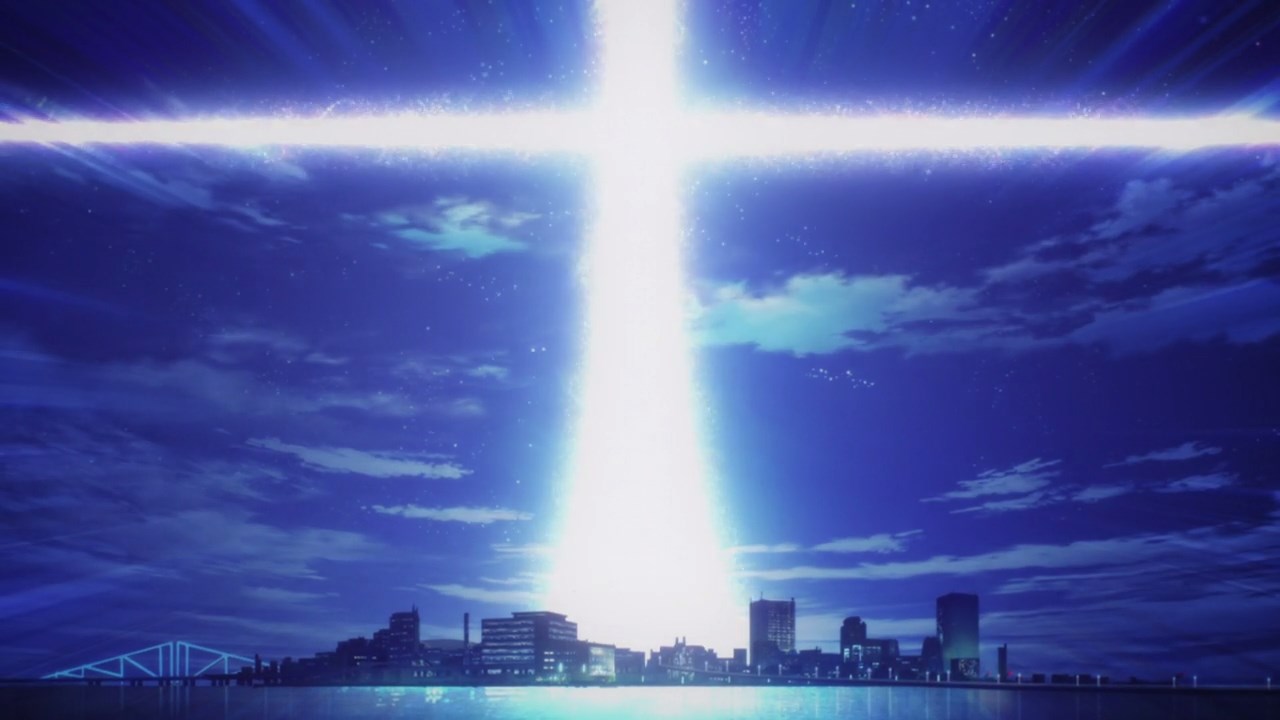 Well everyone, looks like Tatsuya Shiba saves the day once again and man, he’s basically god-level at this point. But that concludes Mahouka Koukou no Rettousei: Raihousha-hen where I have to say that it improves a little from 1st season. Then again, Tatsuya Shiba is still a boring invincible protagonist where he can’t be stopped.

On the other hand, there are some questions that remained unanswered (unless I missed some information) like what happened to Deimos Second and Pixie after the vampire/parasite incident is over. And speaking of parasites, I still don’t know what will the Kuroba and Kudou households do with them.

Still, the only thing that I like on this 2nd season is Angelina Kudou Shields where she might play a major role in future seasons. But the rest of them? I’m not impressed at all. 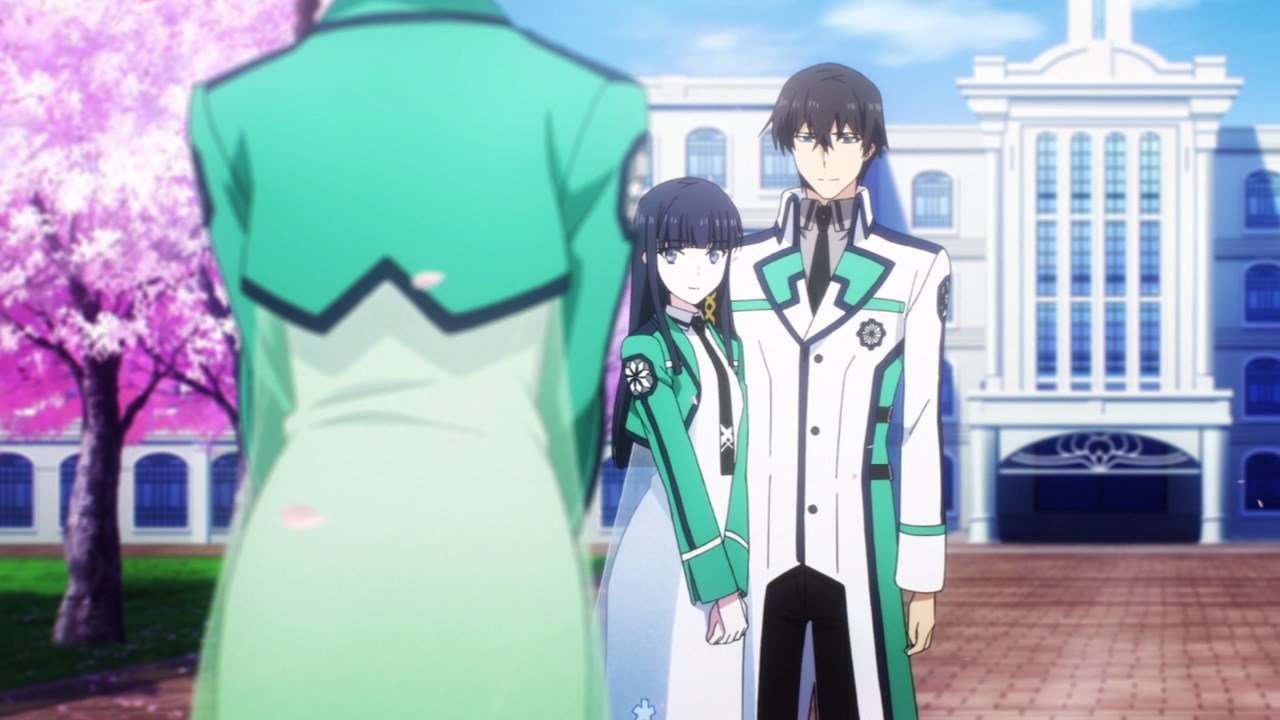 Anyways, let’s end this series as the Shiba siblings met a new student who just enrolled in First High School. 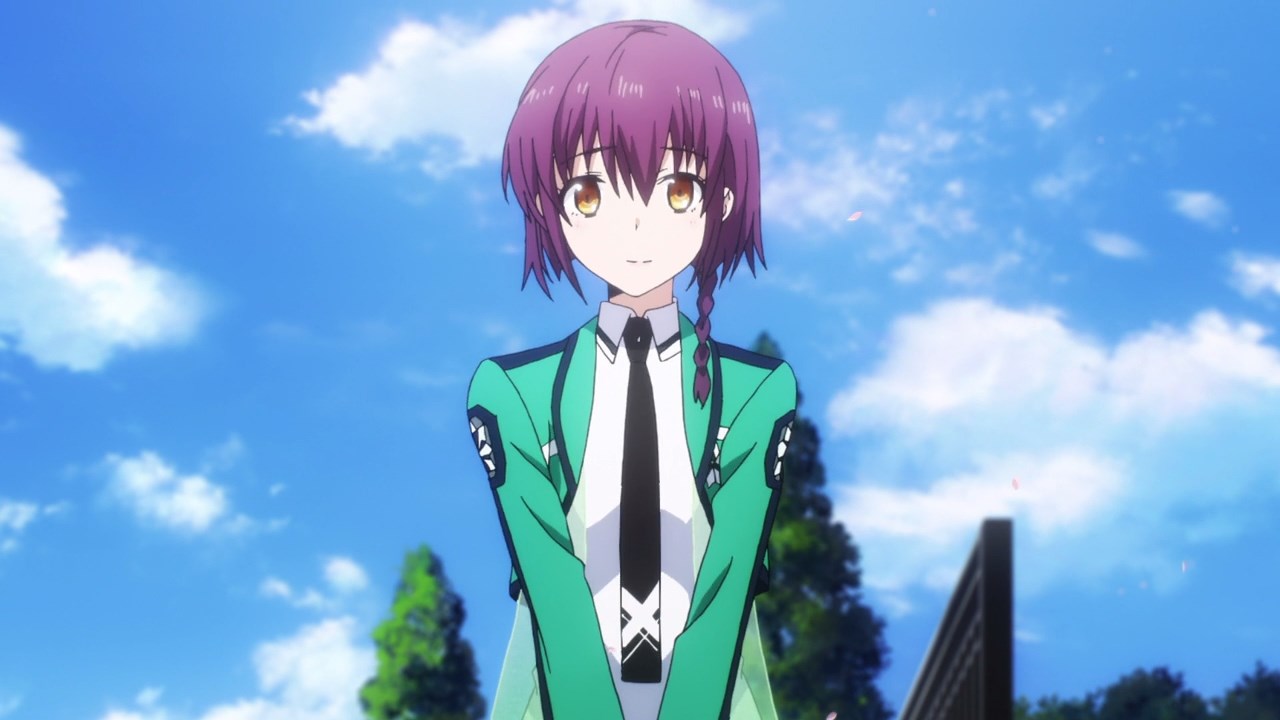 I’m talking about Minami Sakurai as Miyuki’s new attendant will study in First High School as a freshman. Gotta say that she looks cute in her school uniform.

Now then, it’s time to say goodbye for this series but wait a minute, there’s still more for the Mahouka franchise as Kadokawa announced an anime adaptation of its spin-off. Then again, I doubt that spin-off will be more enjoyable than the main series.