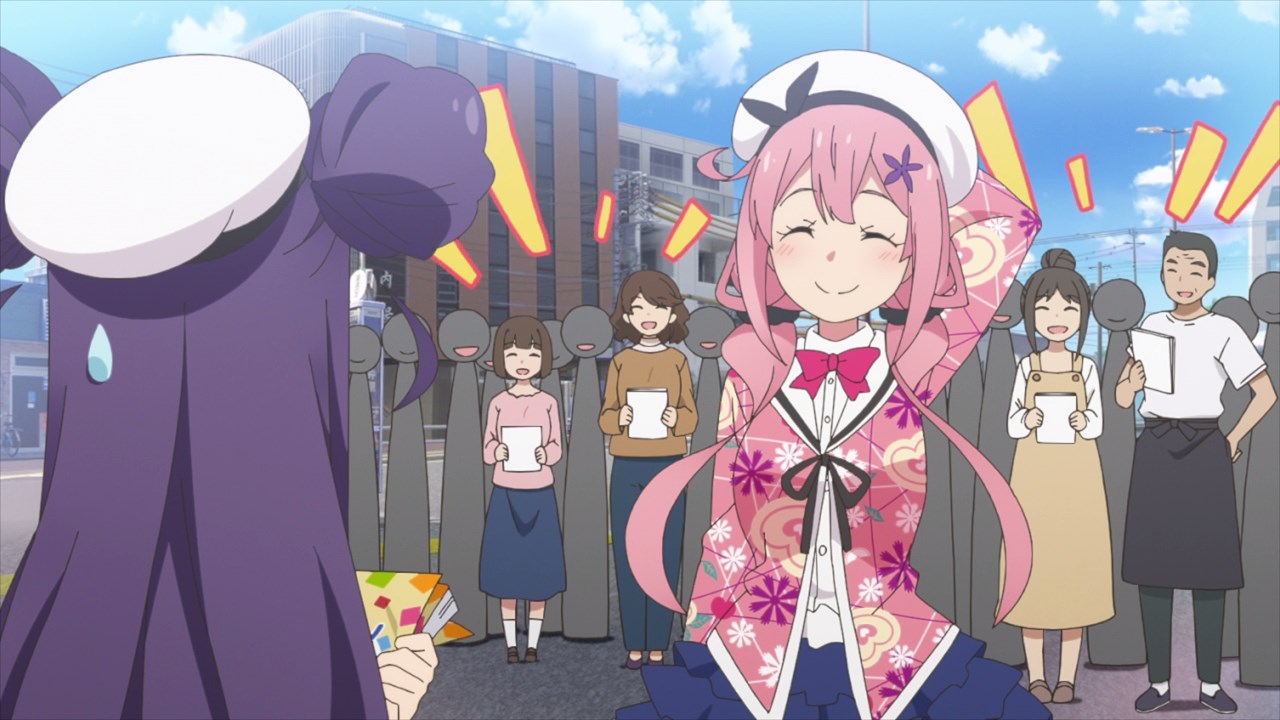 Welcome to the final episode of Ochikobore Fruit Tart where Ino Sakura and her fellow tenants at Nezumisou will hold a mini-concert during the Higako Festival.

While the locals are looking forward for Fruit Tart’s performance, I’m concerned about their setlist as they only have 2 songs to perform. 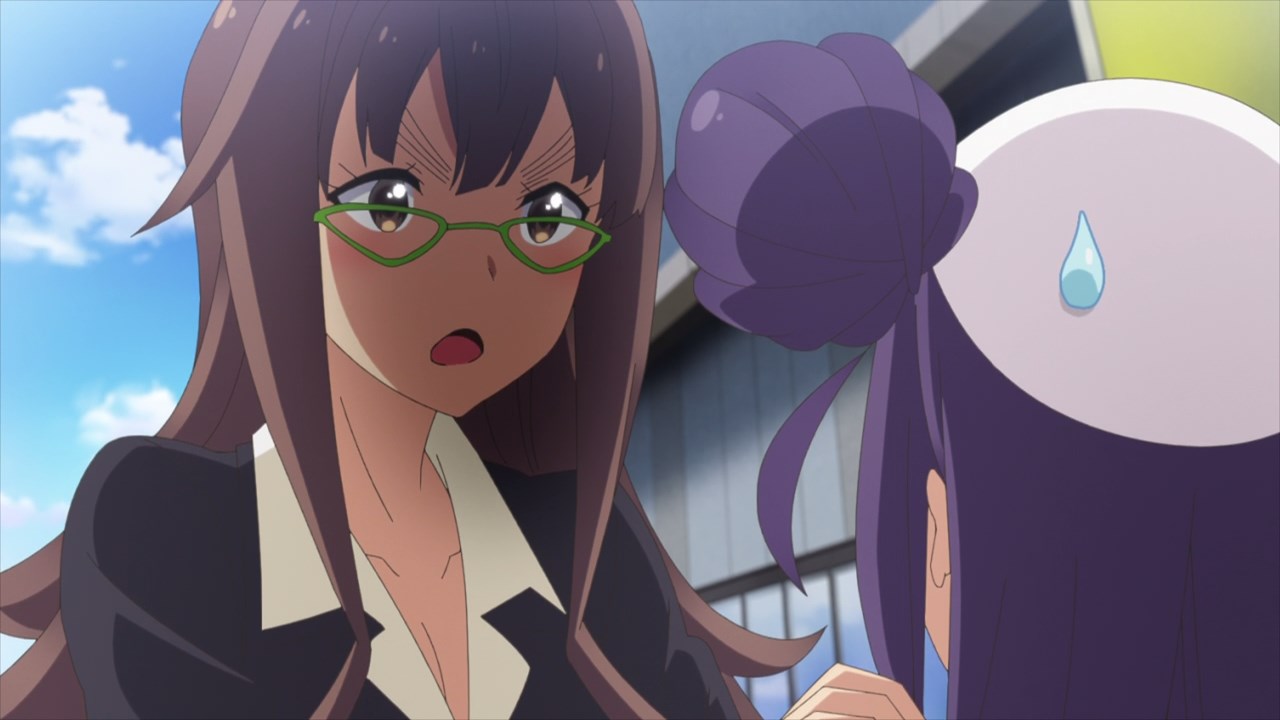 Luckily, Hoho Kajino has a plan but she needs Roko Sekino’s help in order to make it work. Then again, how will she do it? 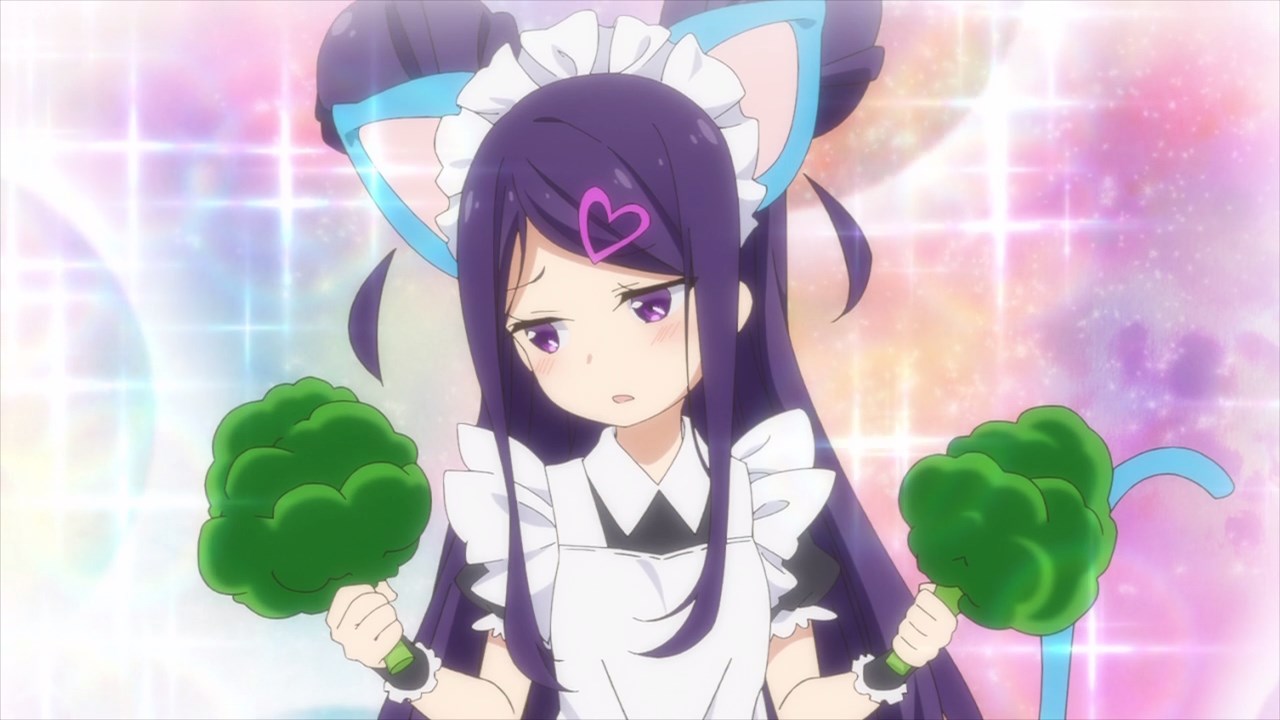 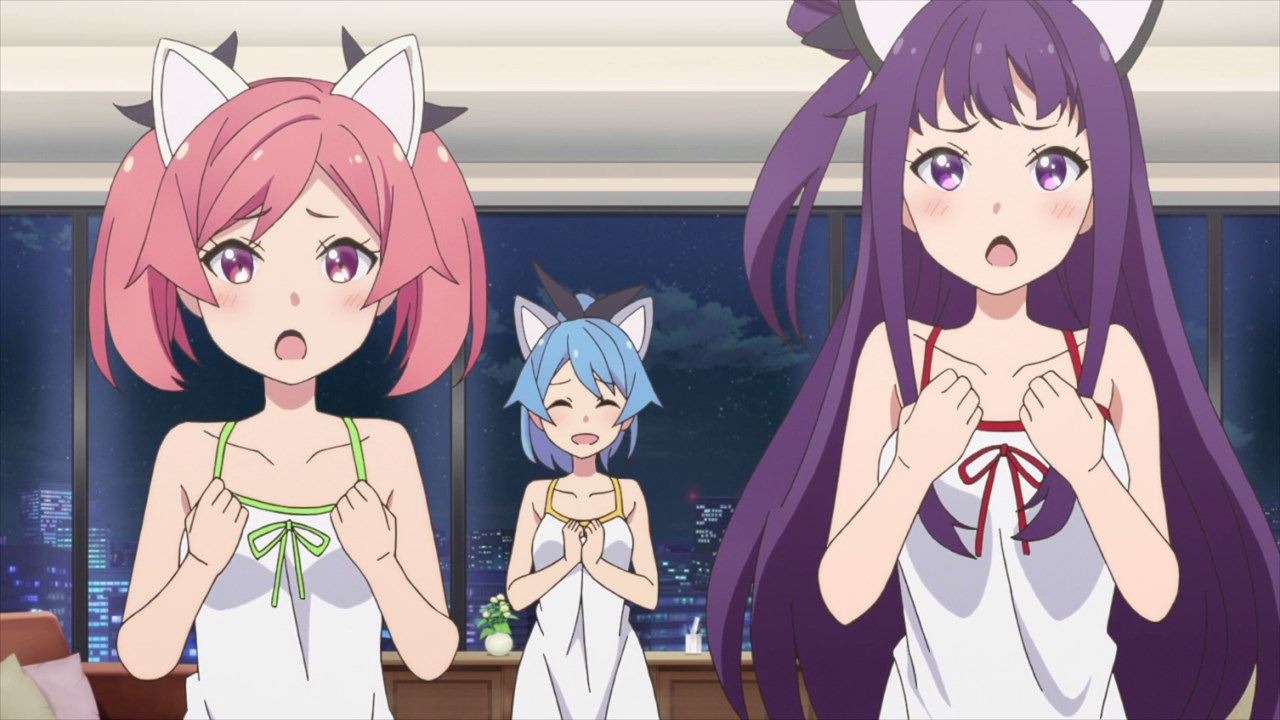 But as you can see, Roko Sekino needs to dress-up as Broko in front of Cream Anmitsu, although Nua Nakamachi and Chiko Sekino are salivating over Broko-chan. C’mon, you can’t mess with their fandom. 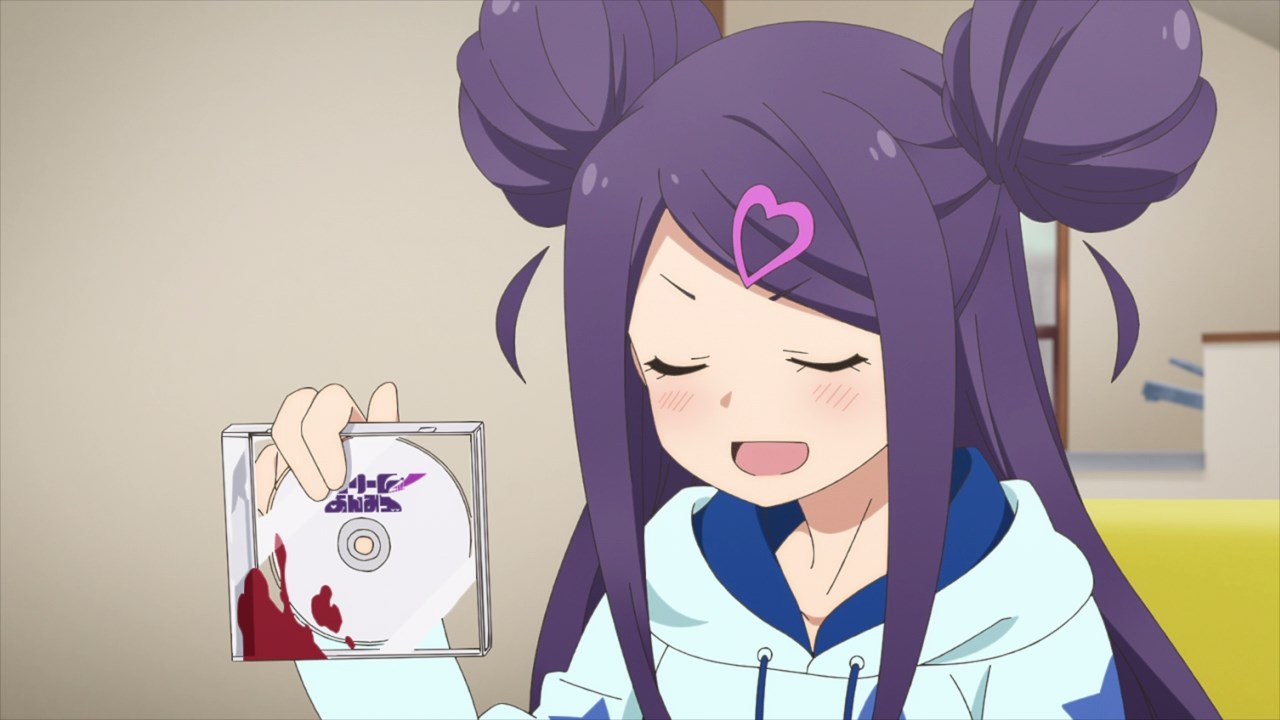 Thanks to Roko’s sacrifice, looks like she borrowed a CD from Cream Anmitsu. Then again, I feel that Nua and Chiko lost a lot of blood on that fateful night as seen here with that splatter on the CD case.

In any case, Fruit Tart will do a cover of Cream Anmitsu’s first single titled “Seishun no Shuuen to Shoujo no Tsubasa”. Of course, there’s a caveat as Cream Anmitsu might join Fruit Tart at the Higako Festival. 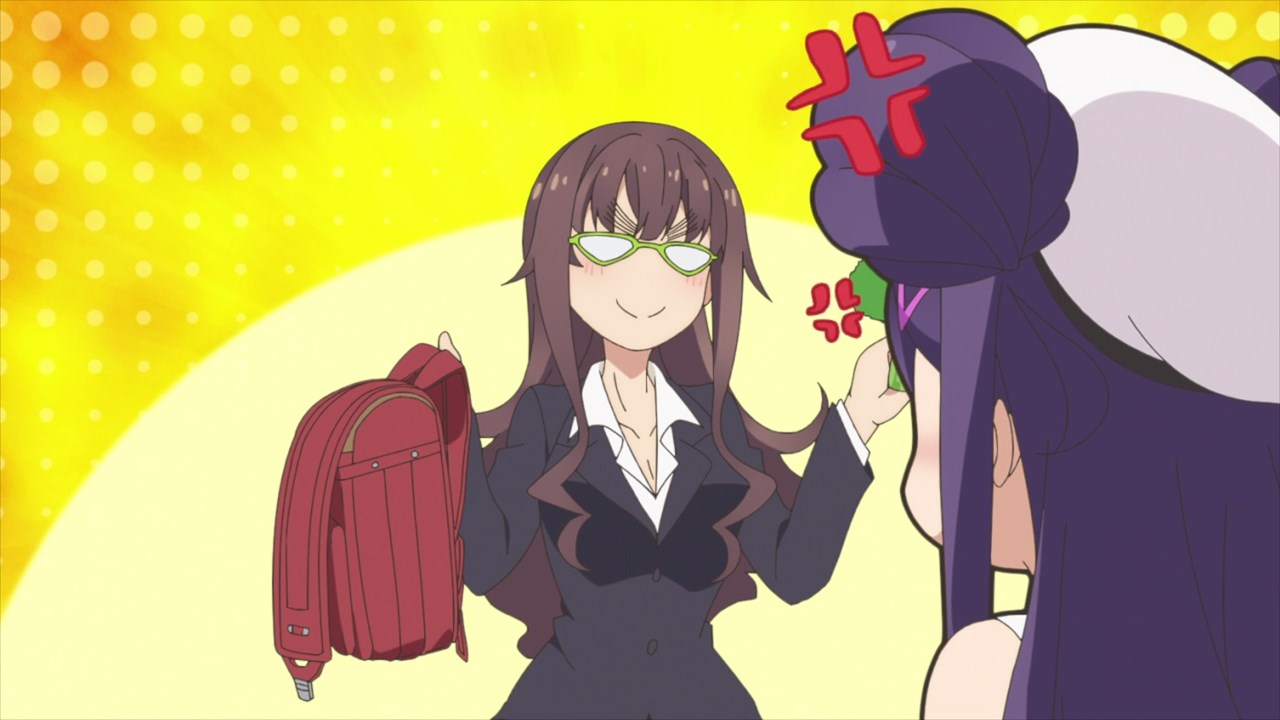 Now then, it’s time for Fruit Tart to perform at the Higako Festival, but there’s one more request from Hoho Kajino where she wants Roko to wear something to liven up the show. Oh boy, Hoho-san wants Roko to dress-up as Broko-chan again… 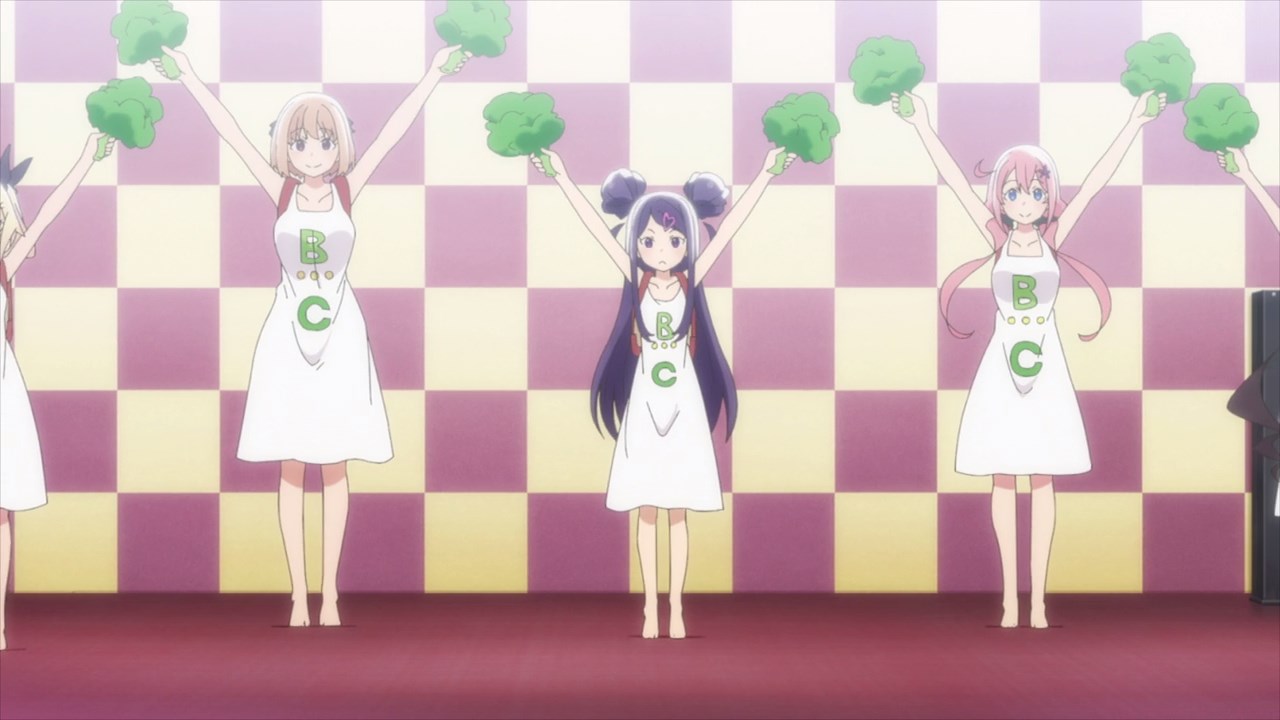 Anyways, looks like Roko has no choice but to wear the Broko costume once again. Oh, and she’s joined by her fellow Fruit Tart members in which Roko is gonna die out of embarassment. 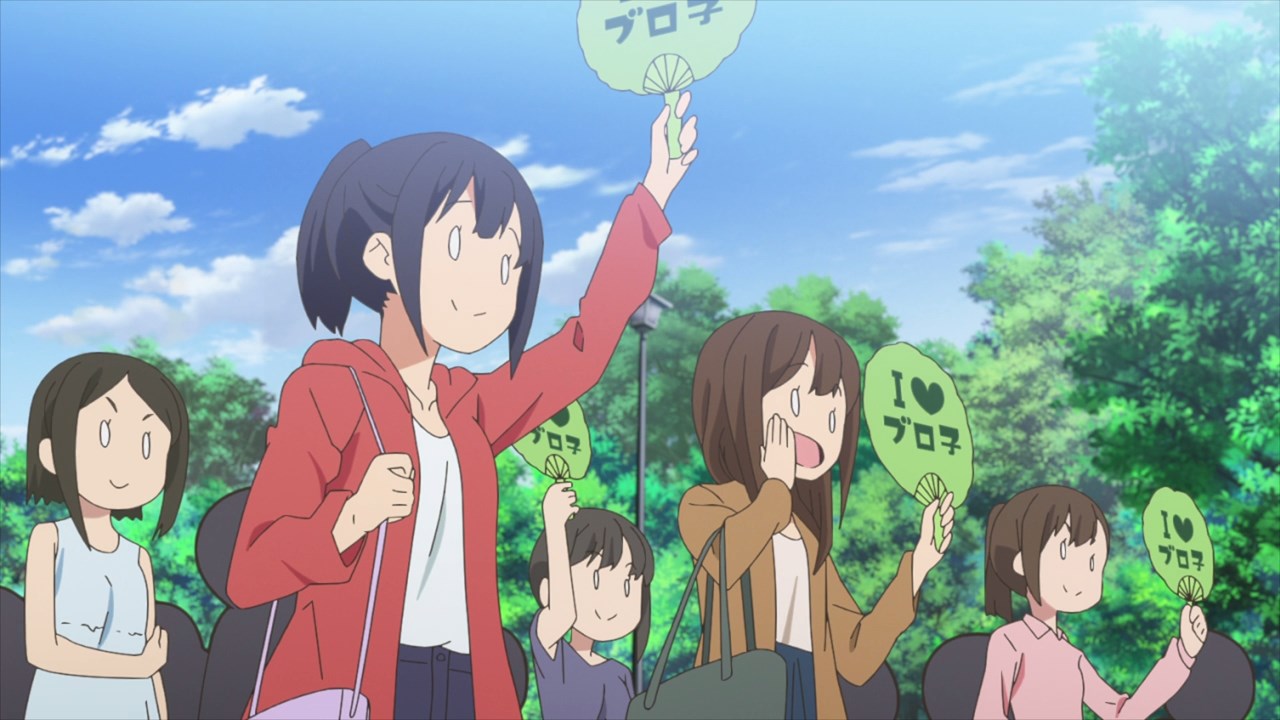 But hey, everyone loved it as Broko-chan fans, both old and new, are really enjoying it.

Then again, some of the fans mistook Roko as a little sister to Broko-chan, despite the fact that she actually has Chiko as her little sister. 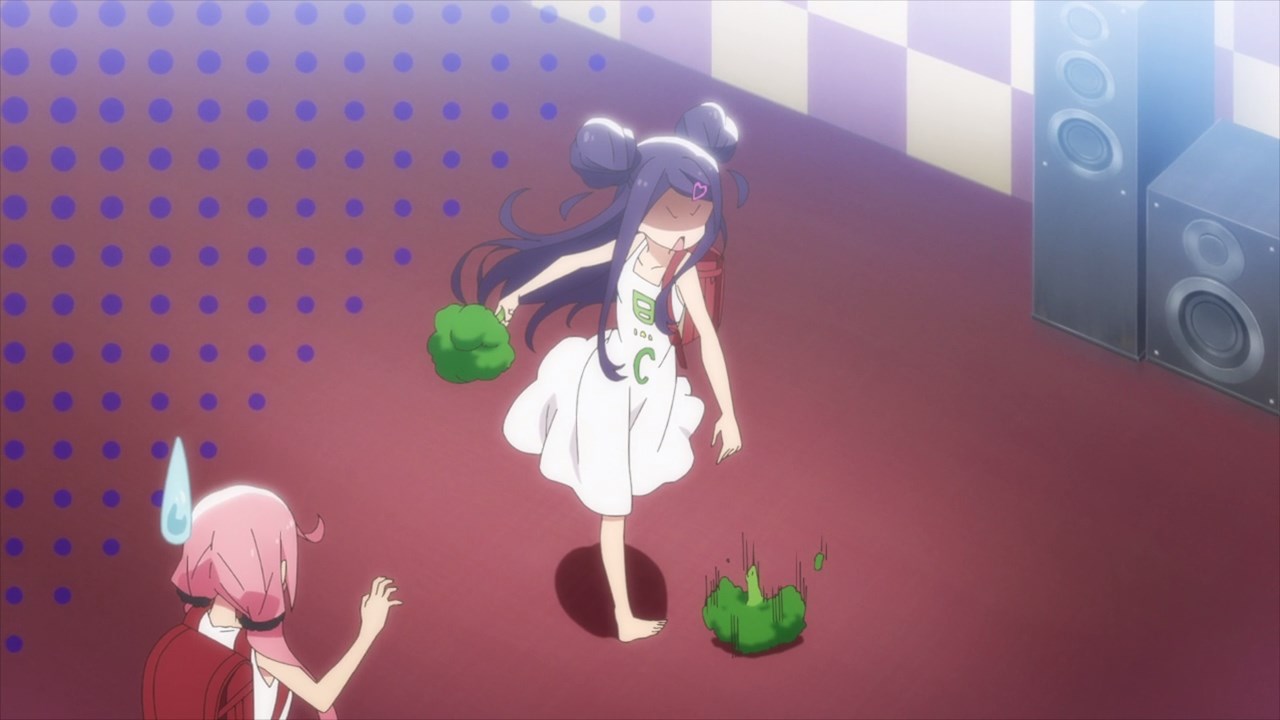 Anyways, that’s about it for Broko-chan’s performance as she made the crowd go wild, although Roko is not very pleased about it.

Um Roko, your true emotions are showing and you’re scaring those fans away. Still, I hope that Roko-chan is okay. 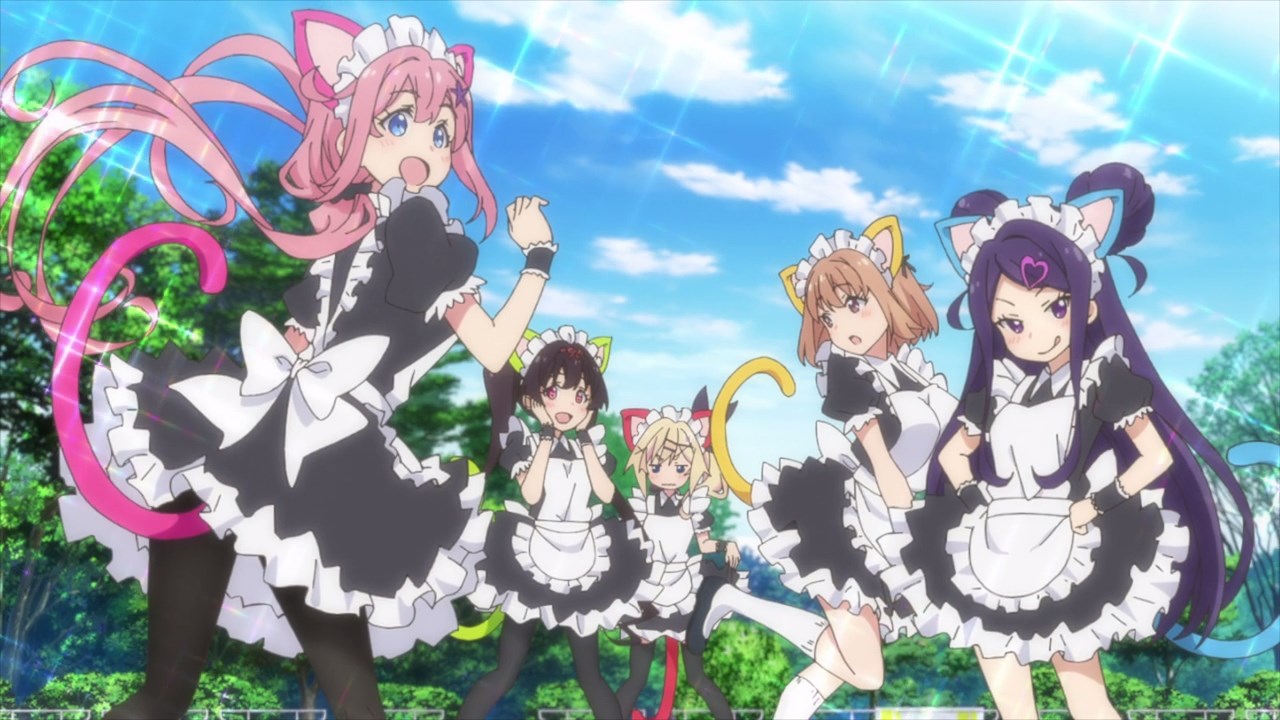 Now it’s time for the 2nd part of their concert as they change into their maid uniforms, complete with cat ears. 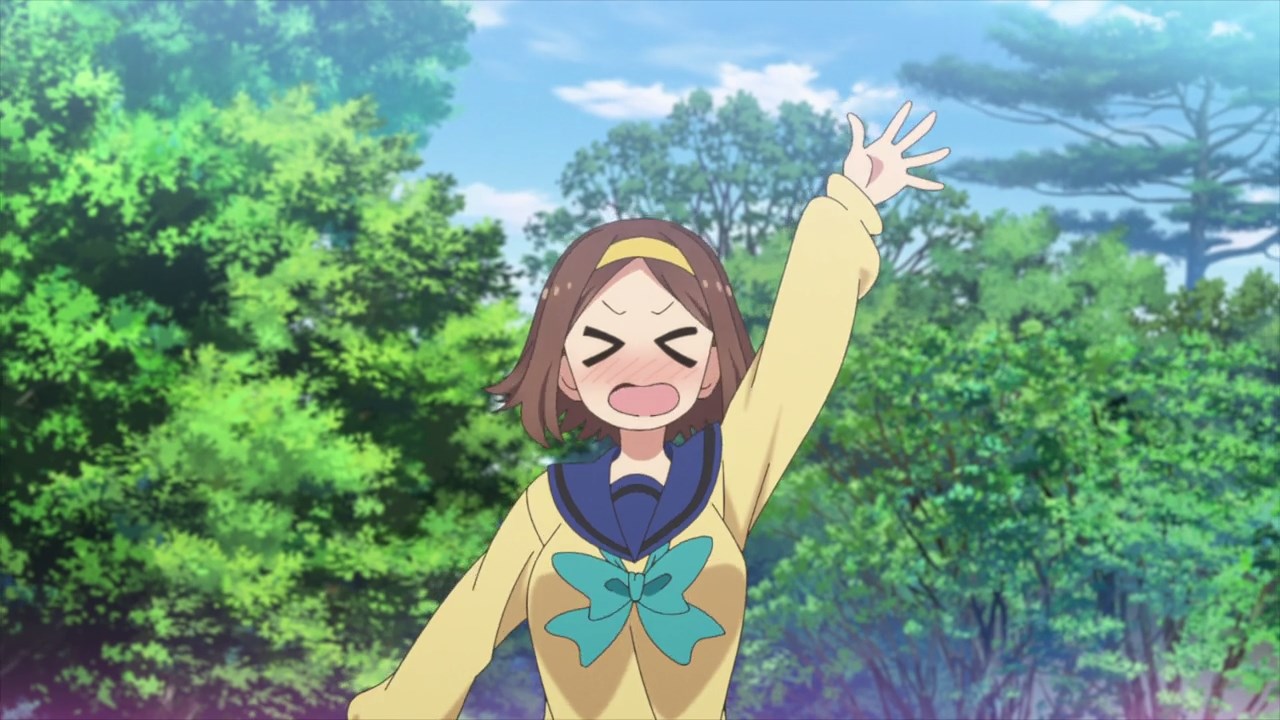 Unfortunately, Tone Honmachi told everyone that there’s a problem in regards to the stage. 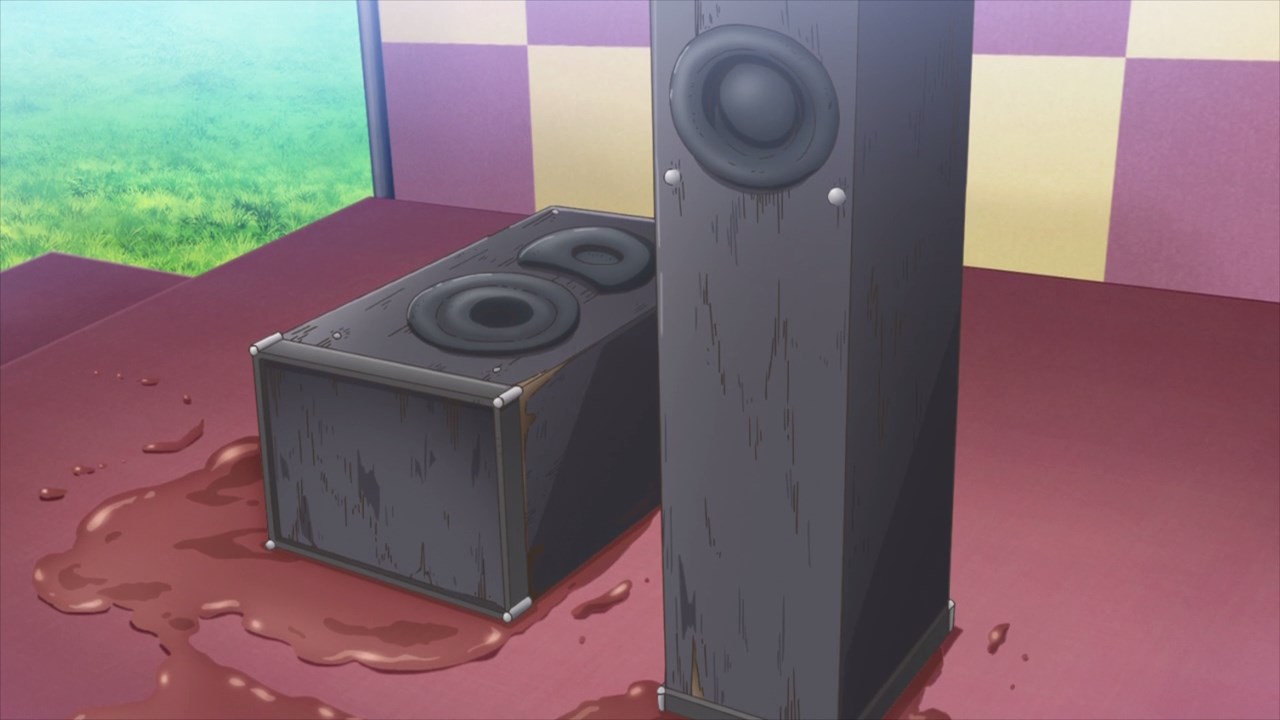 Turns out that someone spilled some booze to the speakers, meaning that they can’t play their music and thus they’ll have to resort to acapella. 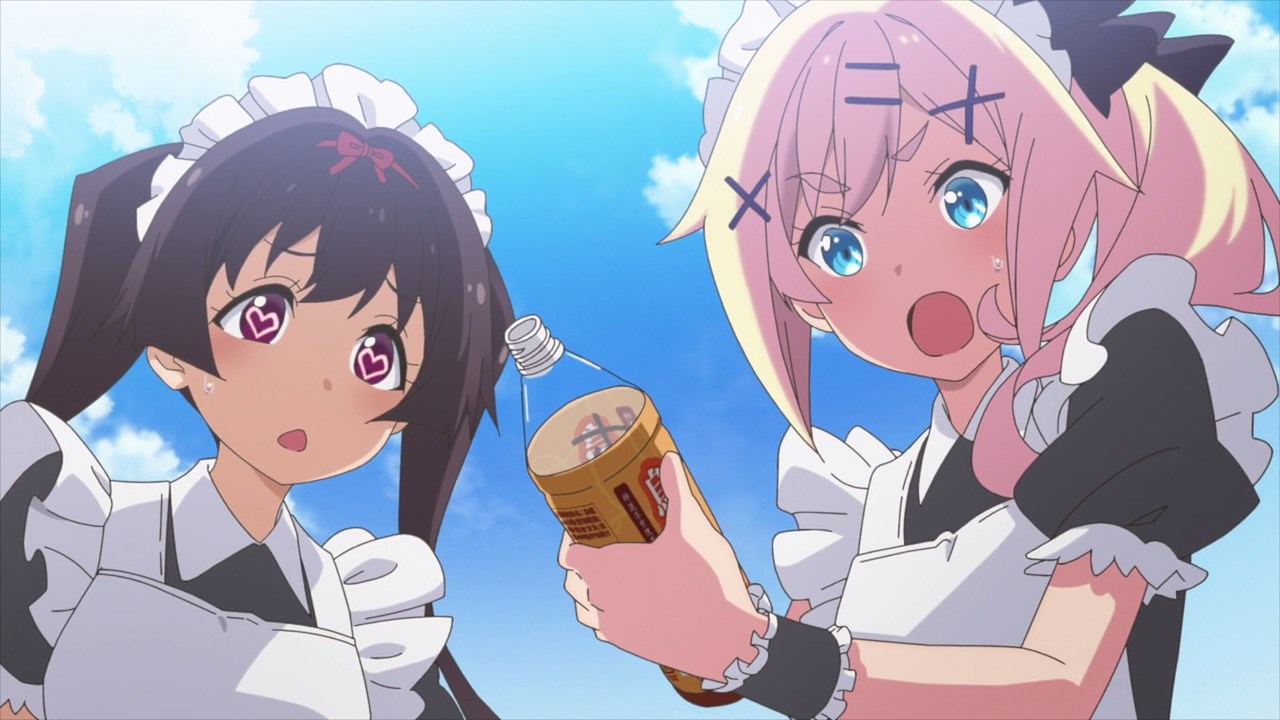 On the other hand, it seems that Hayu Nukui found out that their bumbling manager Hoho Kajino is the one who poured her booze onto the speakers. Damn, Kajino is giving them a pain in the neck for her accidents. 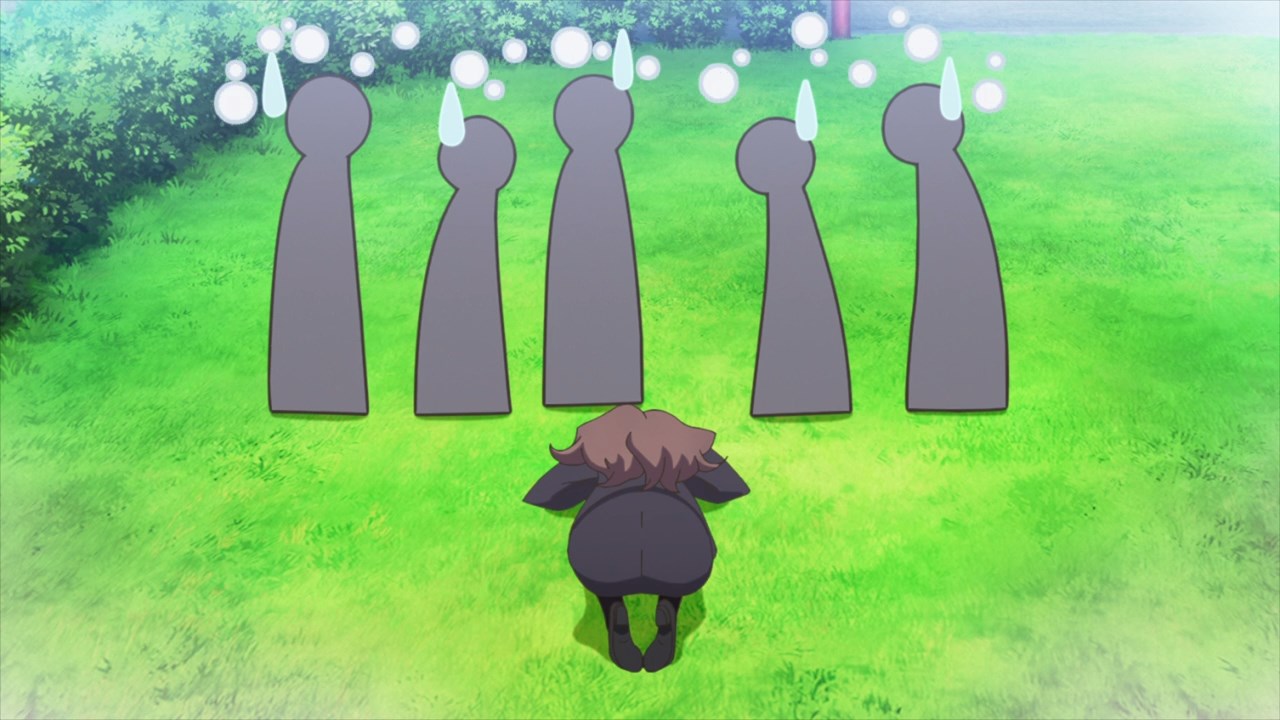 And speaking of Hoho Kajino, she currently apologizing to the locals for wrecking their sound system.

Of course, they forgive her since the speakers are so old but still, they don’t have a spare in time for the 2nd half of the concert. 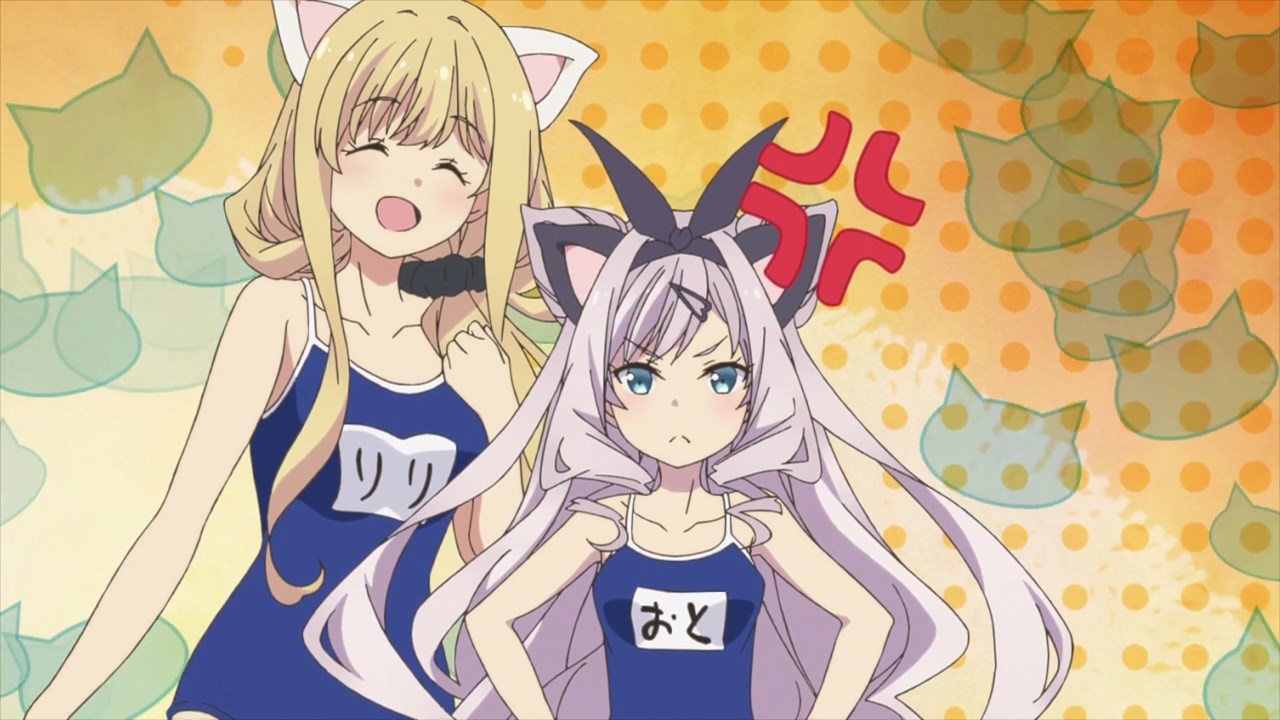 Well, this is where Cat Productions come to the rescue as Riri Higashi and Oto Kogane have arrived in the school swimsuits to help their rivals. 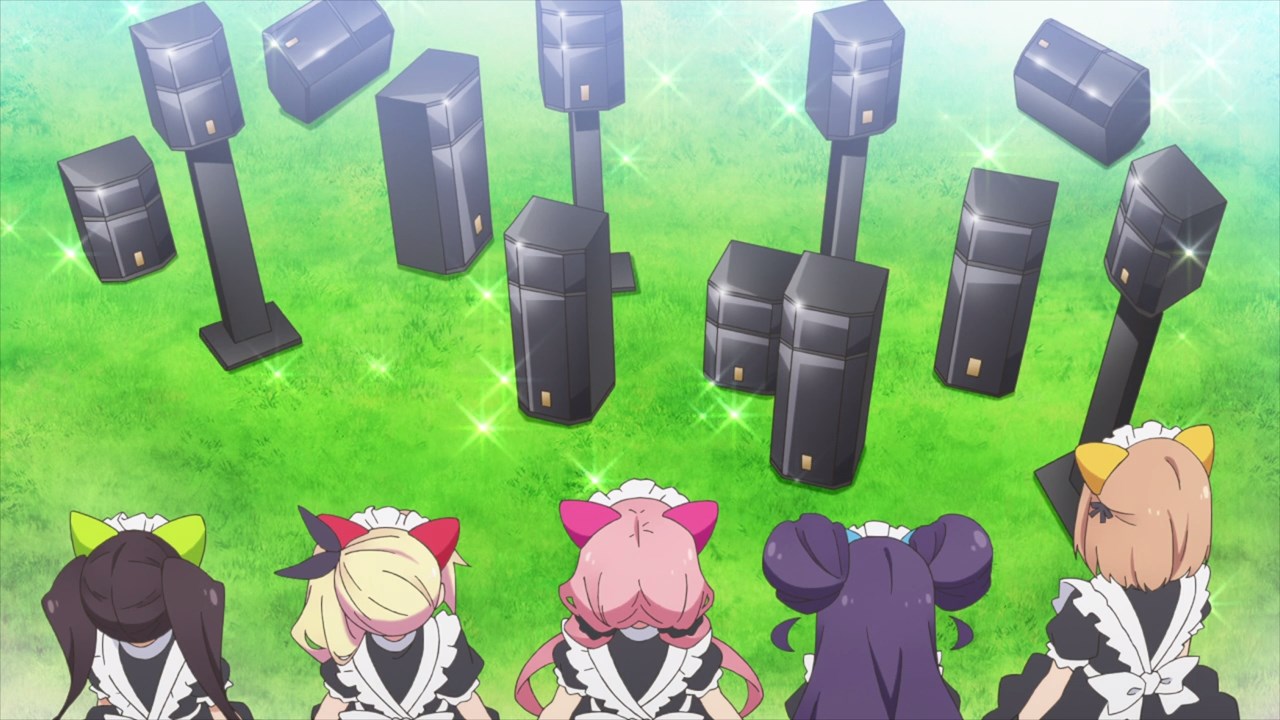 And as you can see, they brought a brand-new set of speakers. Of course, there’s a caveat where Cream Anmitsu will join Fruit Tart on their concert.

Well, I knew that their rivals will join them since Fruit Tart will perform Cream Anmitsu’s first song. Then again, I’m scared that Cream Anmitsu will just hijack their concert since the idol group is the most popular in Japan. 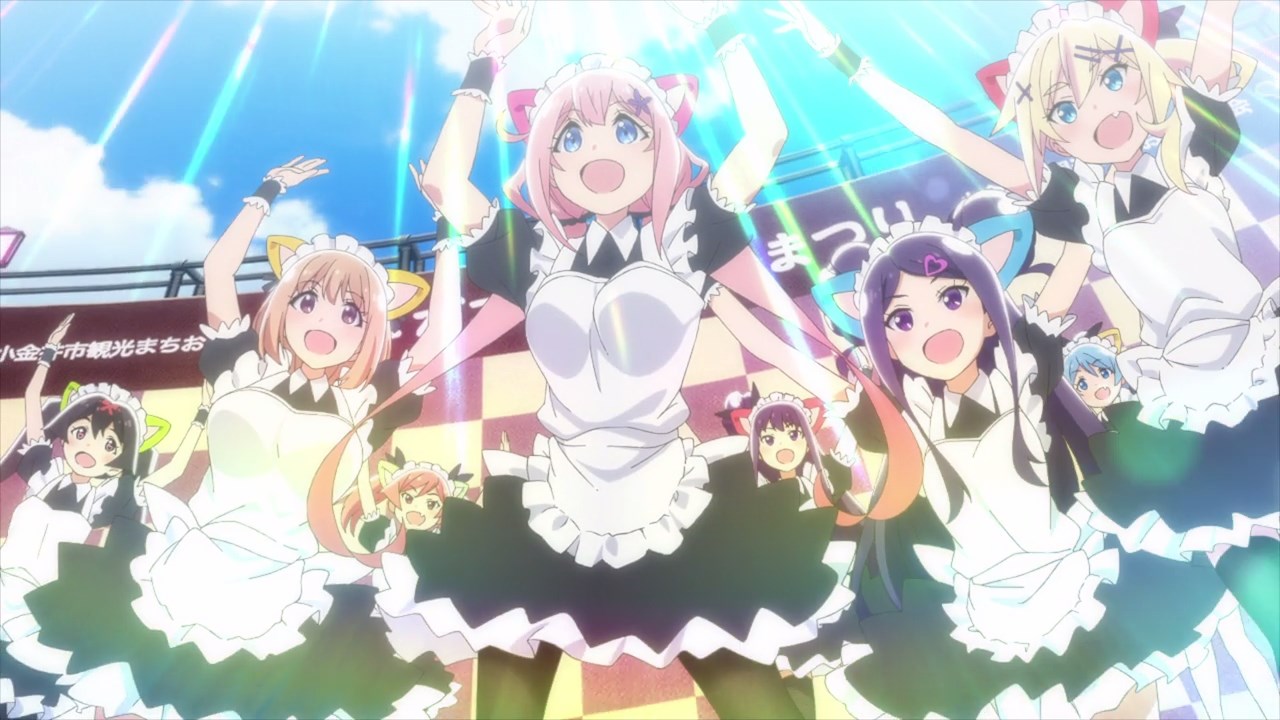 In any case, it’s time for the main event as Fruit Tart and Cream Anmitsu performed “Seishun no Shuuen to Shoujo no Tsubasa” where surprisingly, Cream Anmitsu’s song fits better for Fruit Tart. 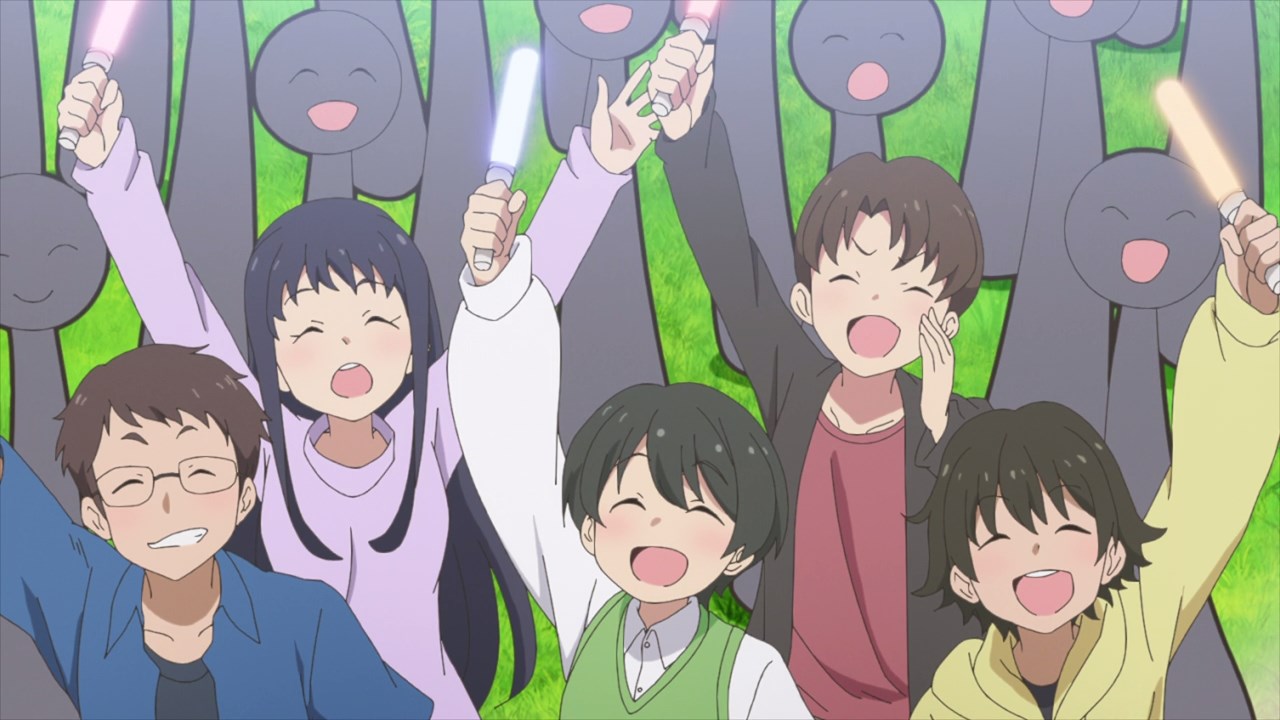 And the crowd really love the performance, although I wish the audience cheer for Fruit Tart because they really deserve the praise from their fans.

Well then, that’s the end of the Higako Festival but I was wondering if Fruit Tart can make it to the National Idol Championships? 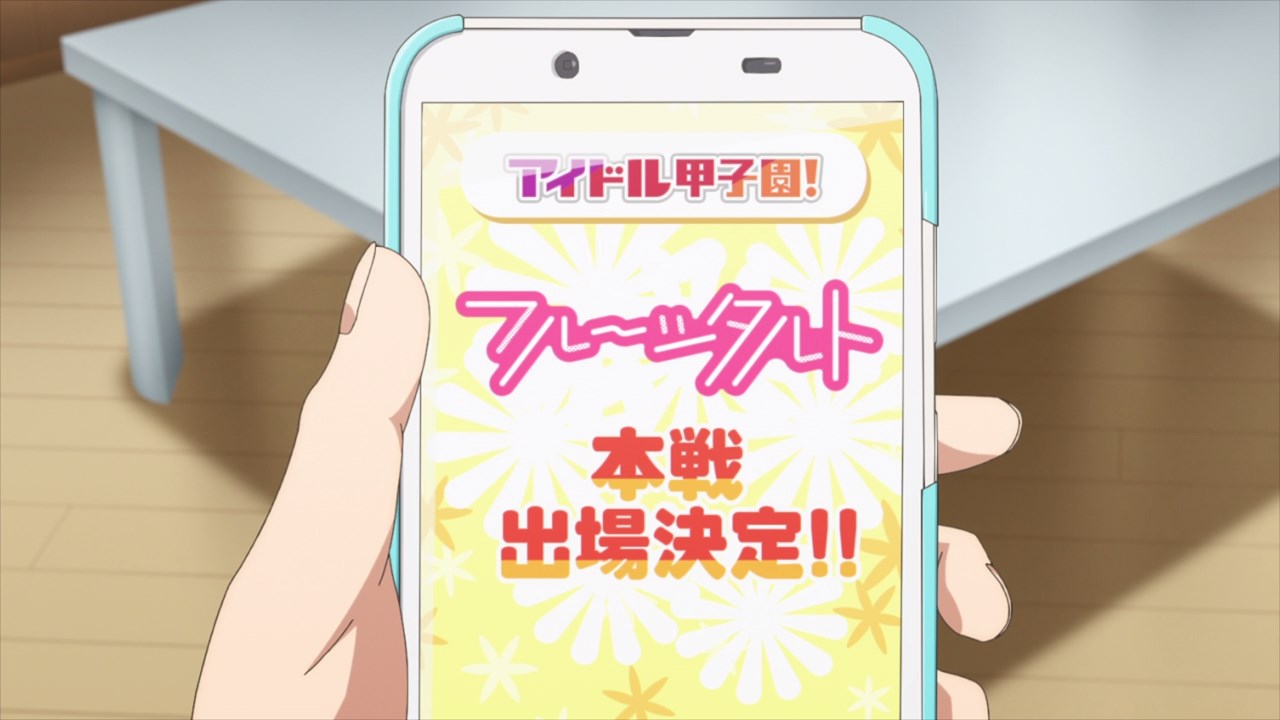 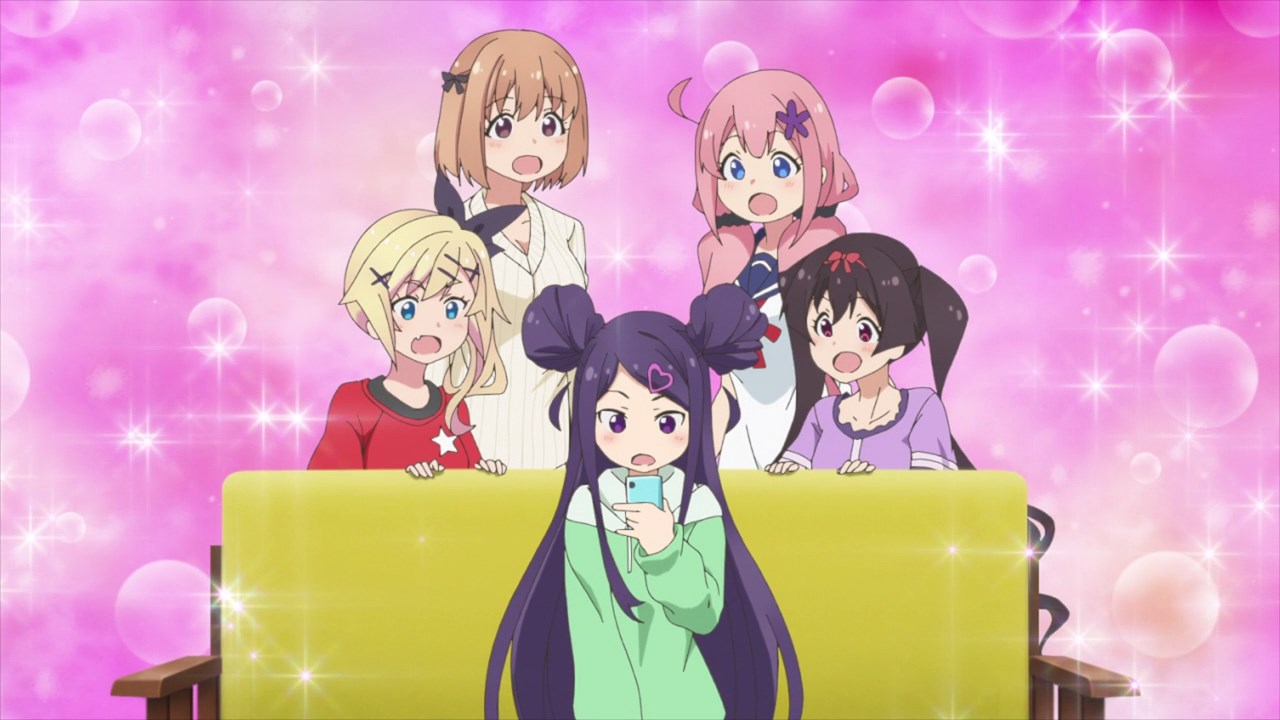 Well, good news for everyone as Fruit Tart managed to qualify to the National Idol Championships. Bad news is that we’ll never see how far will Ino Sakura and the rest go against various idol groups across Japan ’cause this series is over.

In any case, I have to say that Ochikobore Fruit Tart is a decent show to watch but man, I really hate Hoho Kajino for being incompetent. Other than my hatred towards the manager, everything else is good. Anyways, that’s about it for this show and I hope that Fruit Tart will make it to the finals, although Cream Anmitsu will clobber them in the end.