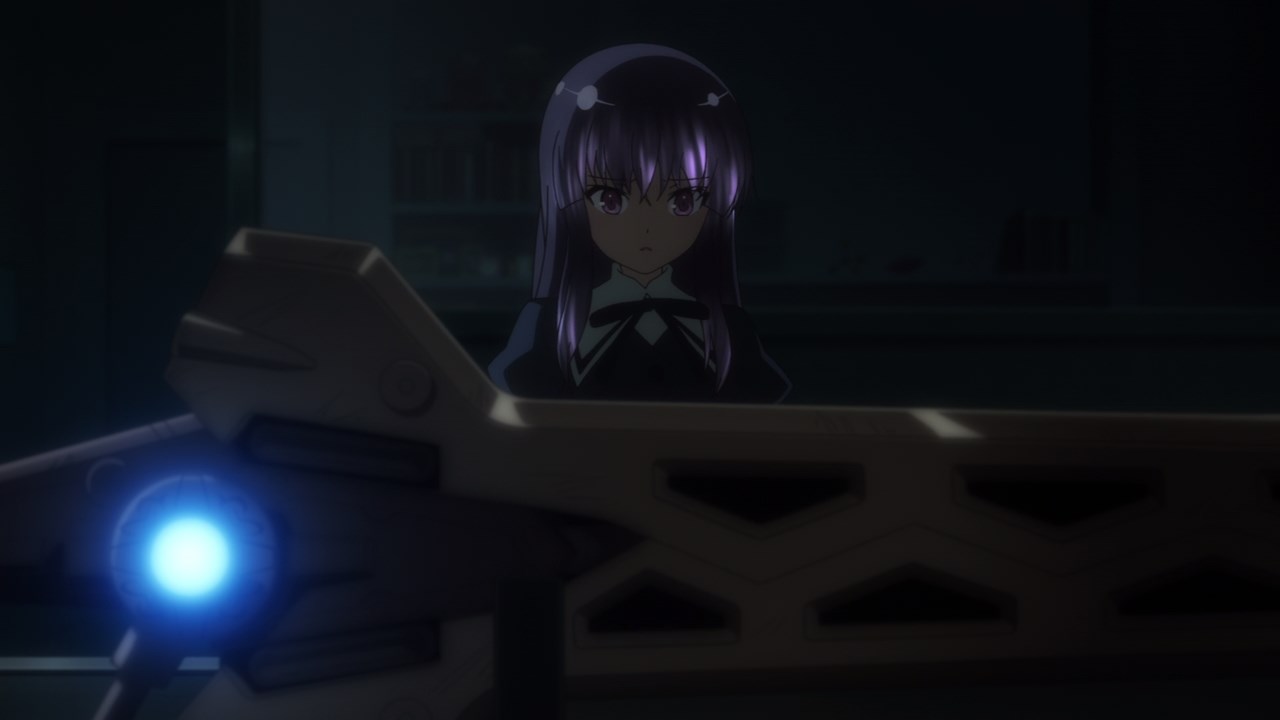 Here’s Yuyu Shirai where instead of running away, she decides to steal Dáinsleif from Moyu Mashima’s lab and head out there to save Riri Hitotsuyanagi from being killed by a HUGE.

Of course, the only thing I’m concerned is that Yuyu-sempai might lose control again due to her Lunatic Trancer. Still, I’m hoping that she’ll save Riri on this final episode. 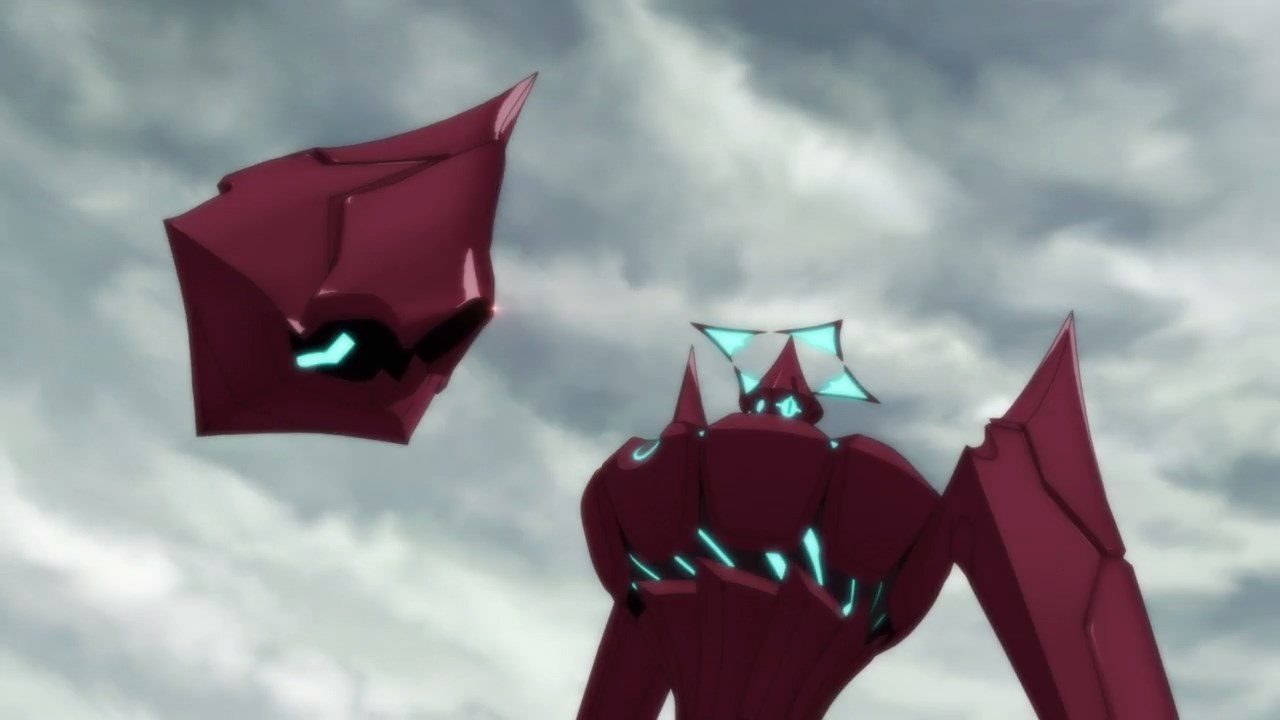 But let’s focus on Riri Hitotsuyanagi where she’s having trouble defeating this HUGE after creating a wave that stops the flow of Magie. Oh, and Riri is about to get stabbed by its large spear. 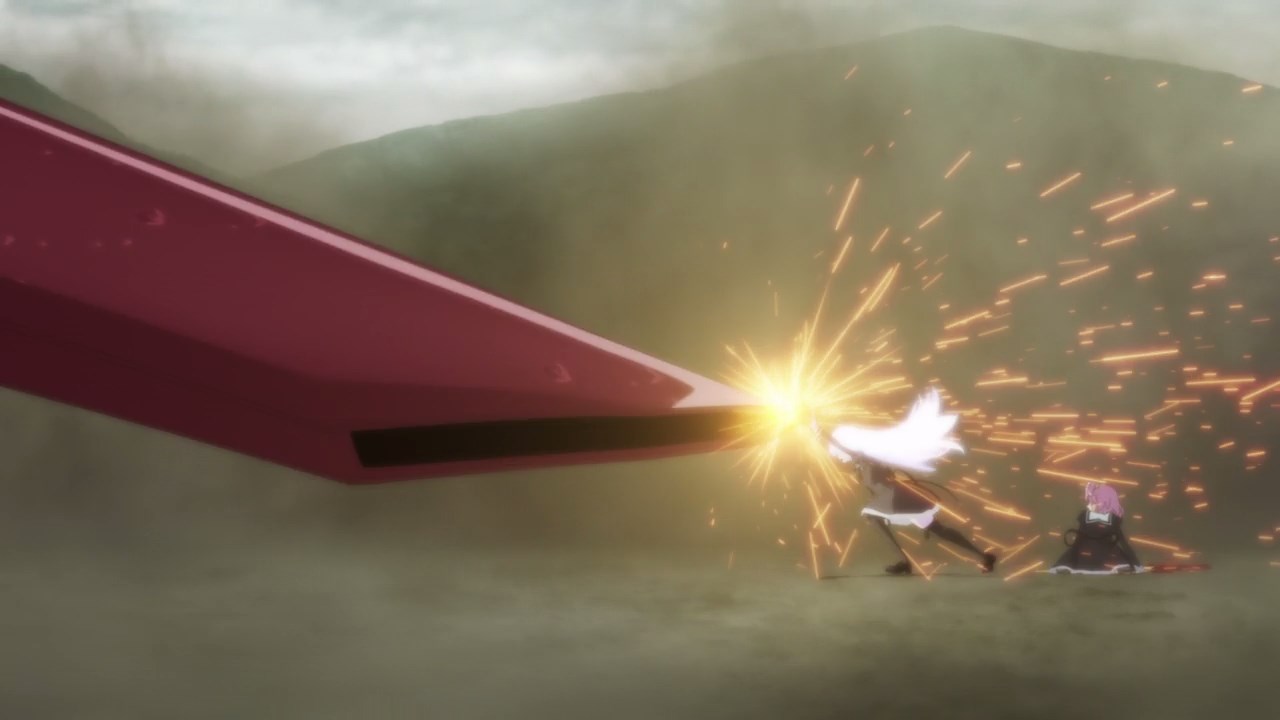 Fortunately, Yuyu Shirai has arrived to save her Schild from being killed, albeit using Lunatic Trancer. Still, it’s gonna be a tough battle for both of those Lilies. 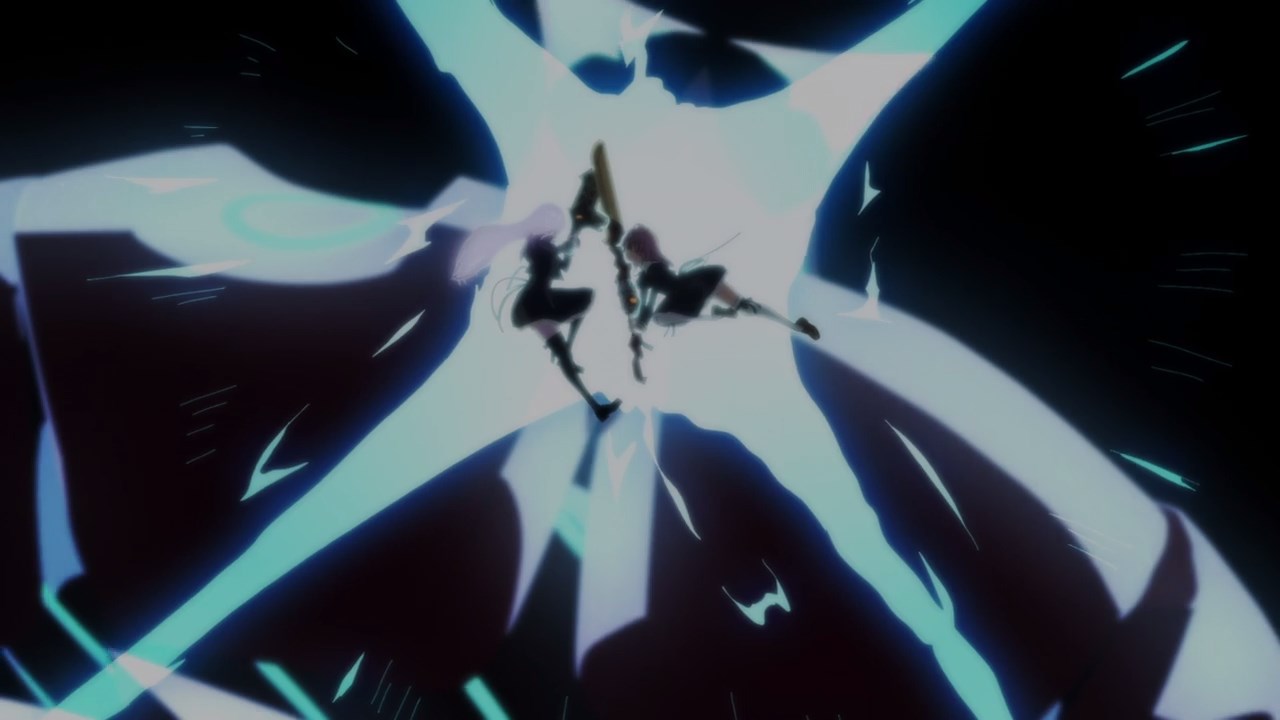 Speaking of Shirai, she needs to pay attention when it comes to HUGE’s attacks as she’s gonna get hit by a laser.

Good thing Riri Hitotsuyanagi managed to save her Schutzengel by pushing Yuyu away. Then again, they might get hit by a laser anyway. 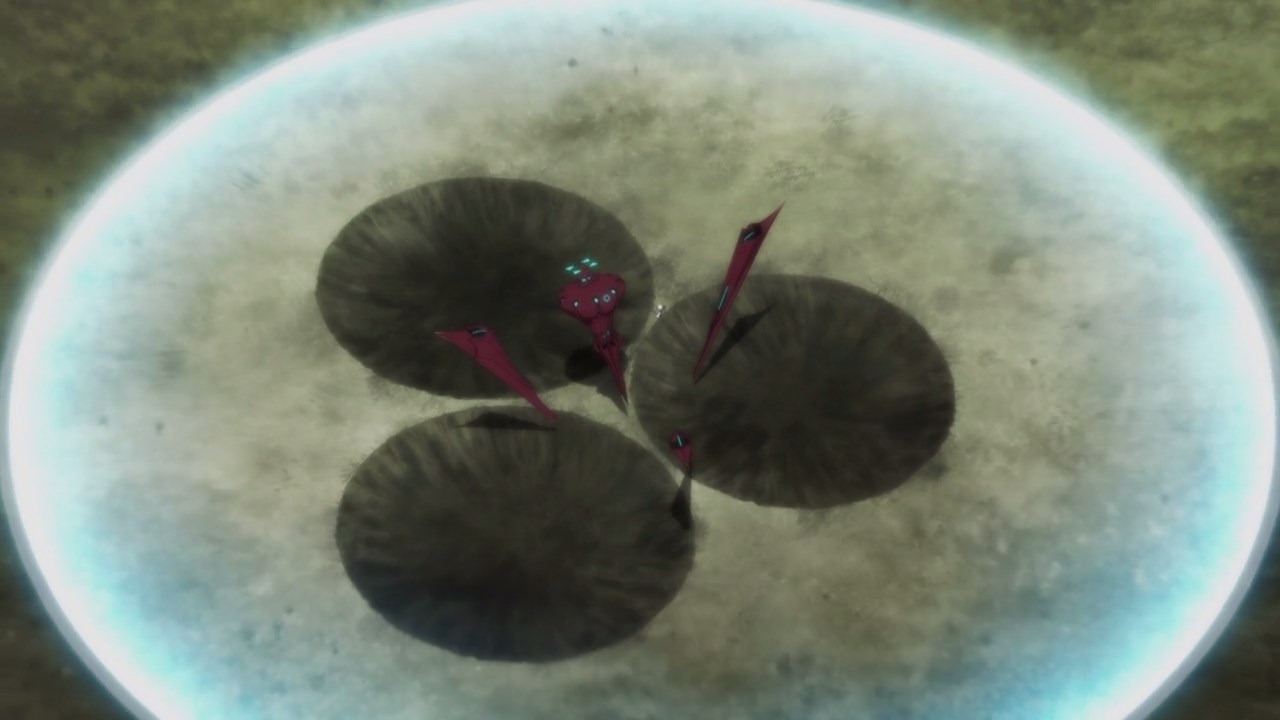 However, this resulted in a powerful shockwave that might cancel the HUGE’s anti-Magie wave. Oh I hope Riri can pull off a miracle on this episode. 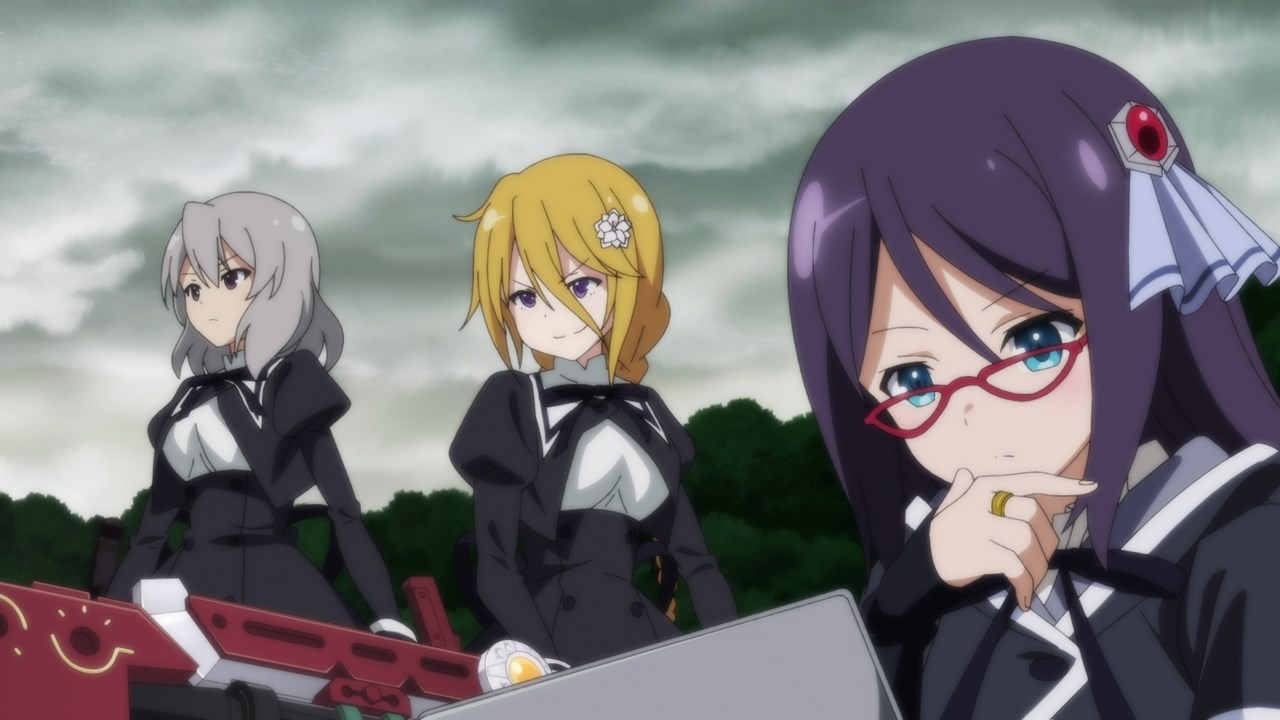 Luckily, Riri managed to pull off a miracle as her Rare Skill Charisma converted the HUGE’s laser into a powerful shockwave that restores Magie across all CHARMs, meaning that the Lilies can fight back. 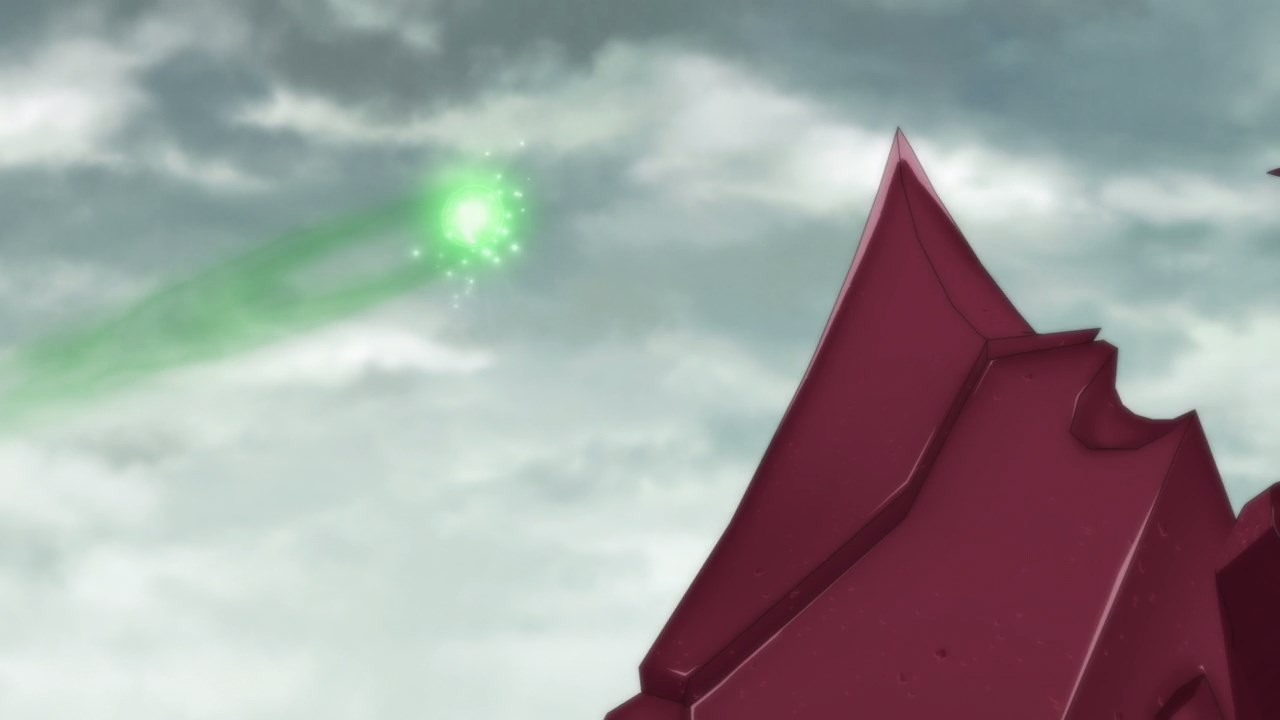 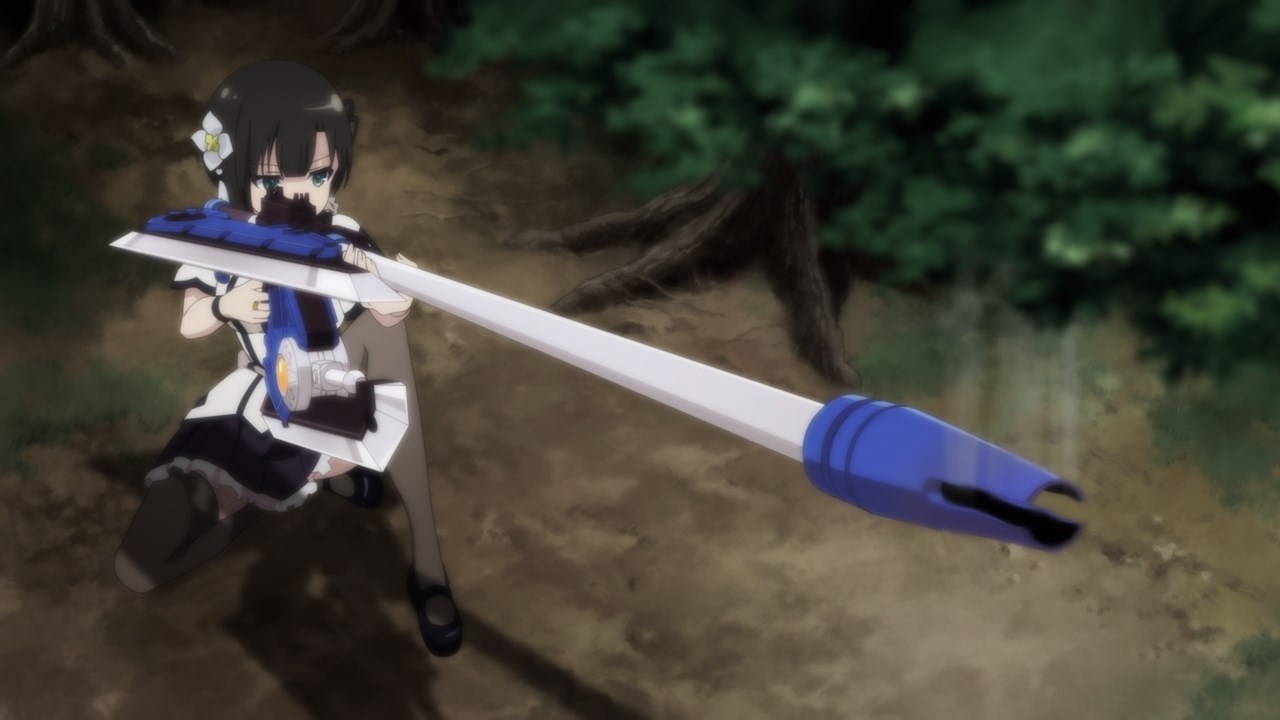 Well then, it’s time to destroy the HUGE once and for all as Wang Yujia fired a Neunwelt Bullet to commence the Neunwelt Tactic. 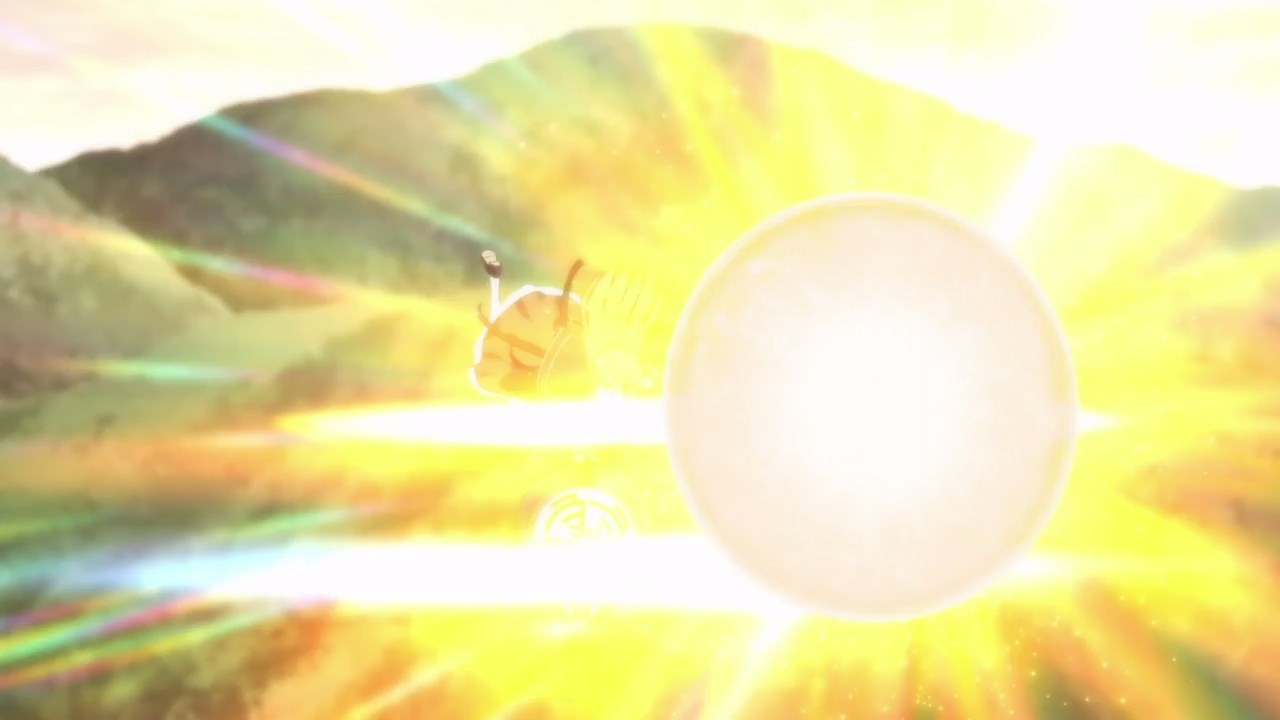 But as you can see, all members of Hitotsuyanagi-tai including Kuo Shenlin are gonna share their energy until it’s ready to be delivered to both Yuyu Shirai and Riri Hitotsuyanagi. 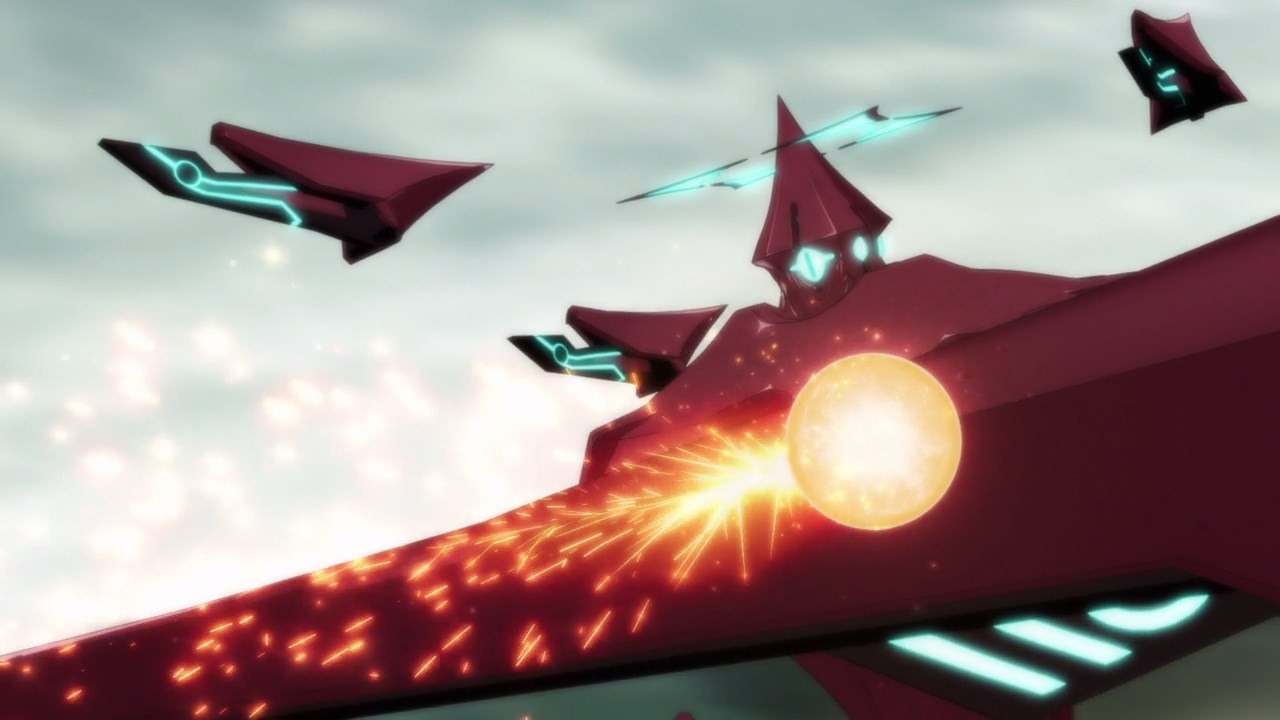 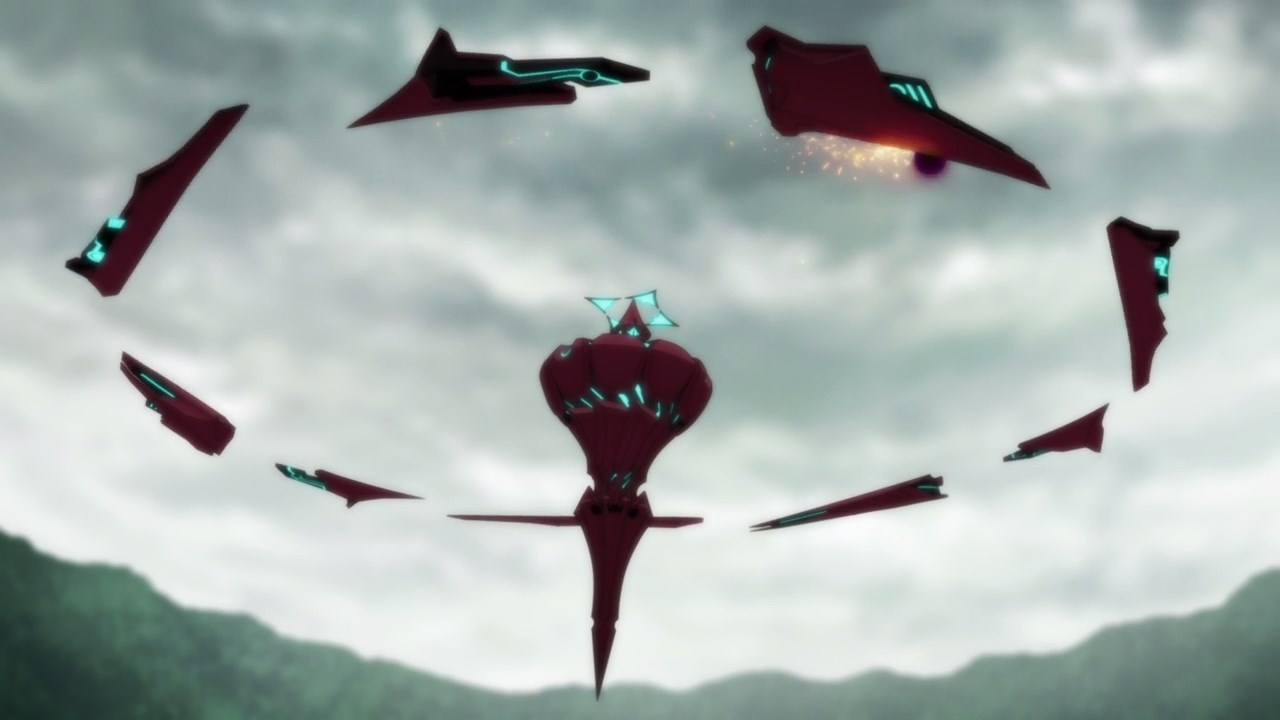 Sadly, the HUGE managed to capture the Neunwelt Bullet, meaning that the enemy can deliver the Neunwelt Tactic back at the Lilies.

You know something, this HUGE might represent Misuzu Kawazoe’s soul which is why it knows the Neunwelt Tactic and how to counter it. 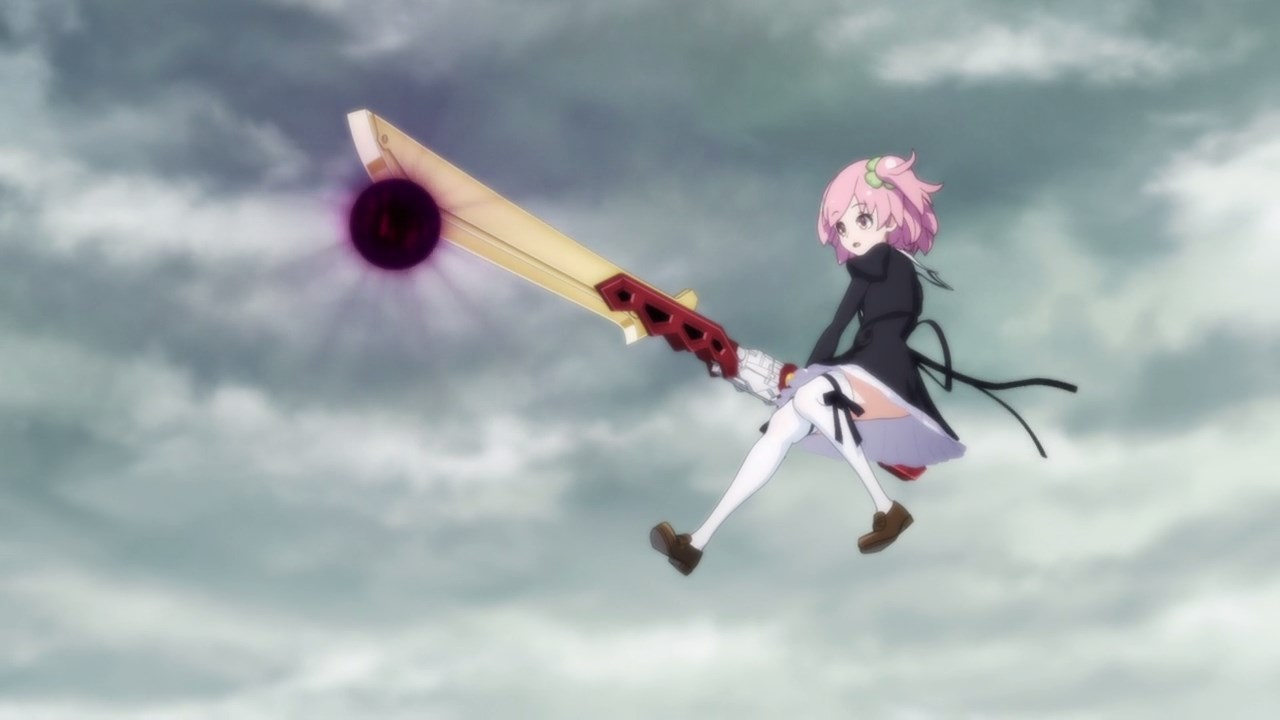 Not on Riri Hitotsuyanagi’s watch though as she managed to capture the bullet, but it appears that the HUGE-infused bullet is too much to handle for Riri-chan. 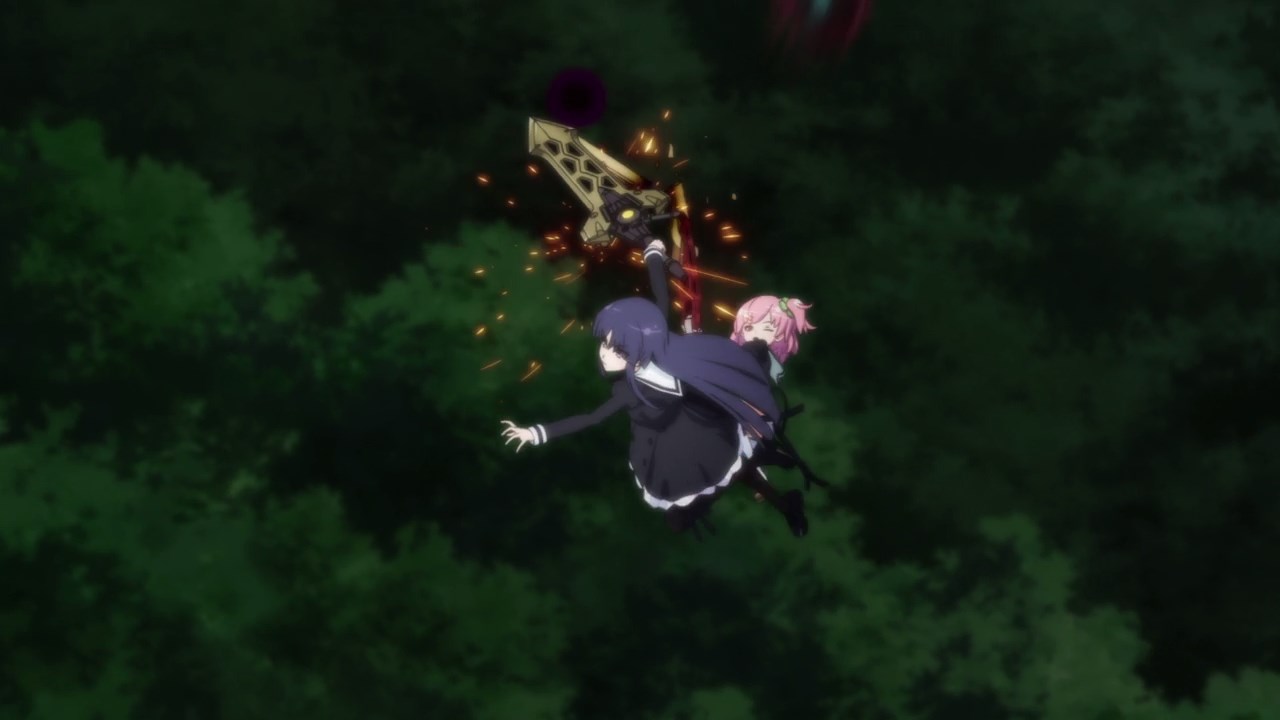 That’s until Yuyu Shirai lend a helping hand by swatting the Neunwelt Bullet away. Of course, who’s gonna get it? 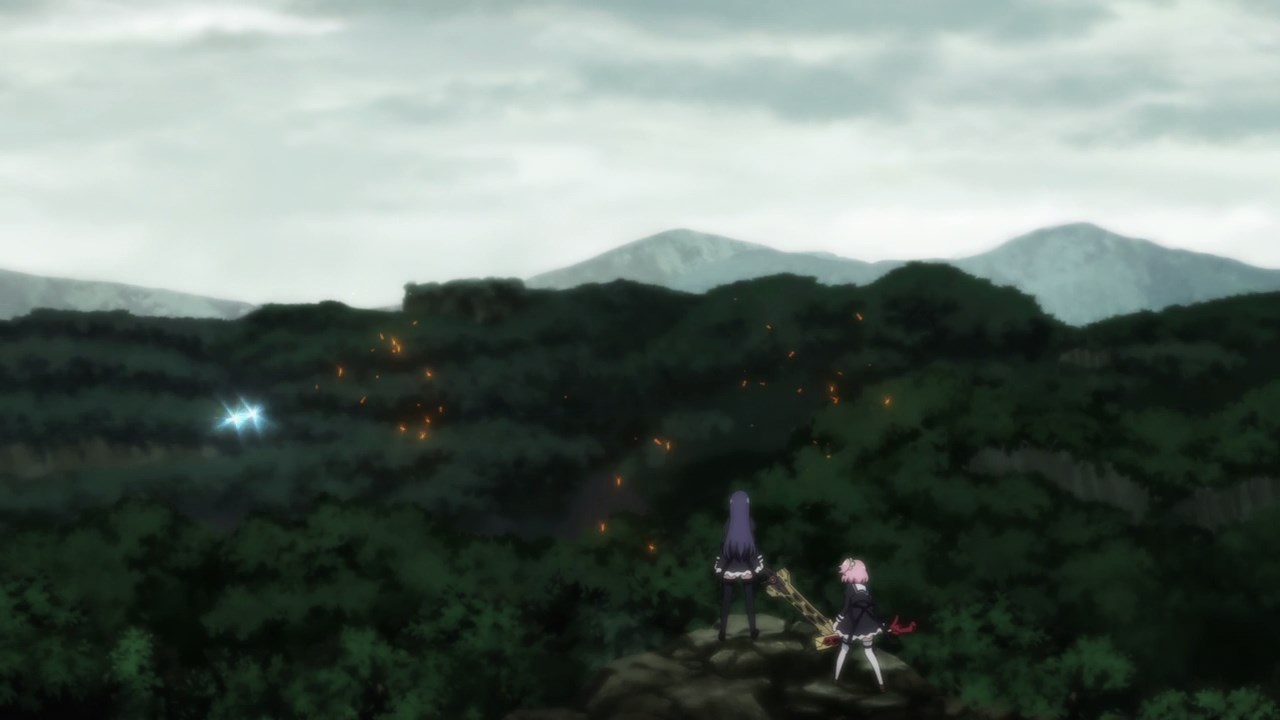 Well, the rest of Yurigaoka Girls’ Academy as the Lilies are passing the bullet like crazy until they gave it to Hitotsuyanagi-tai. 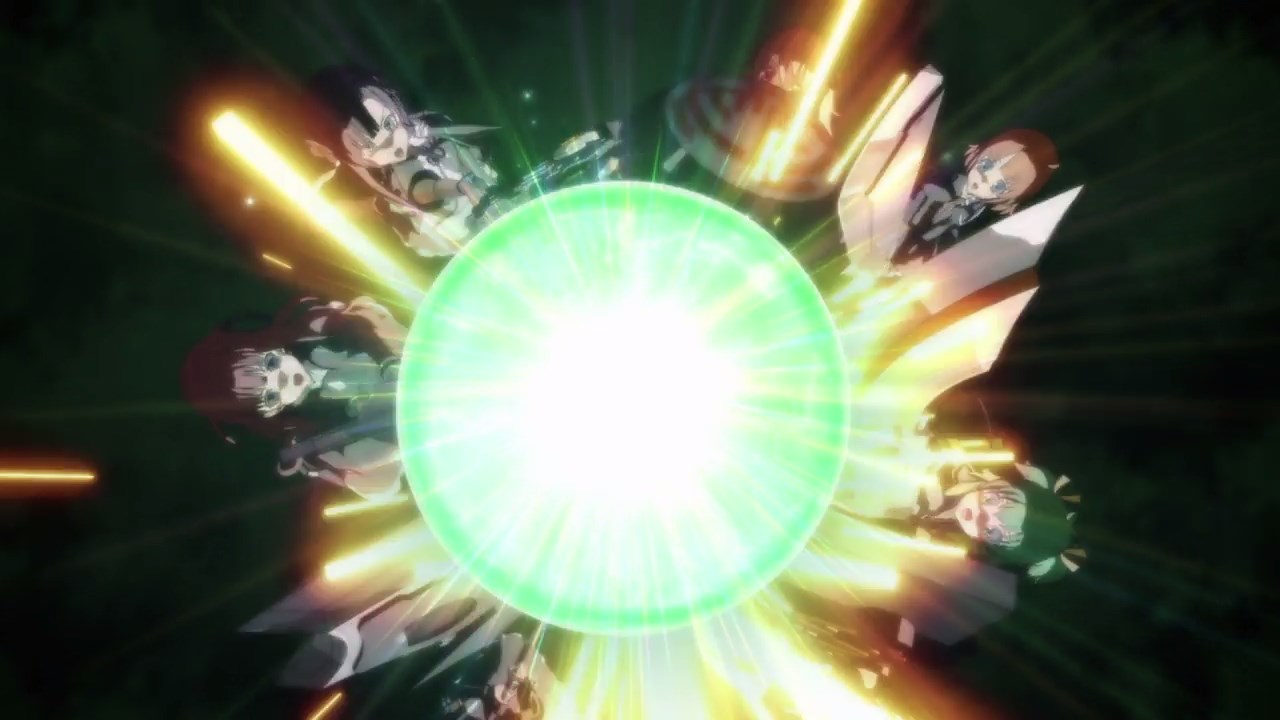 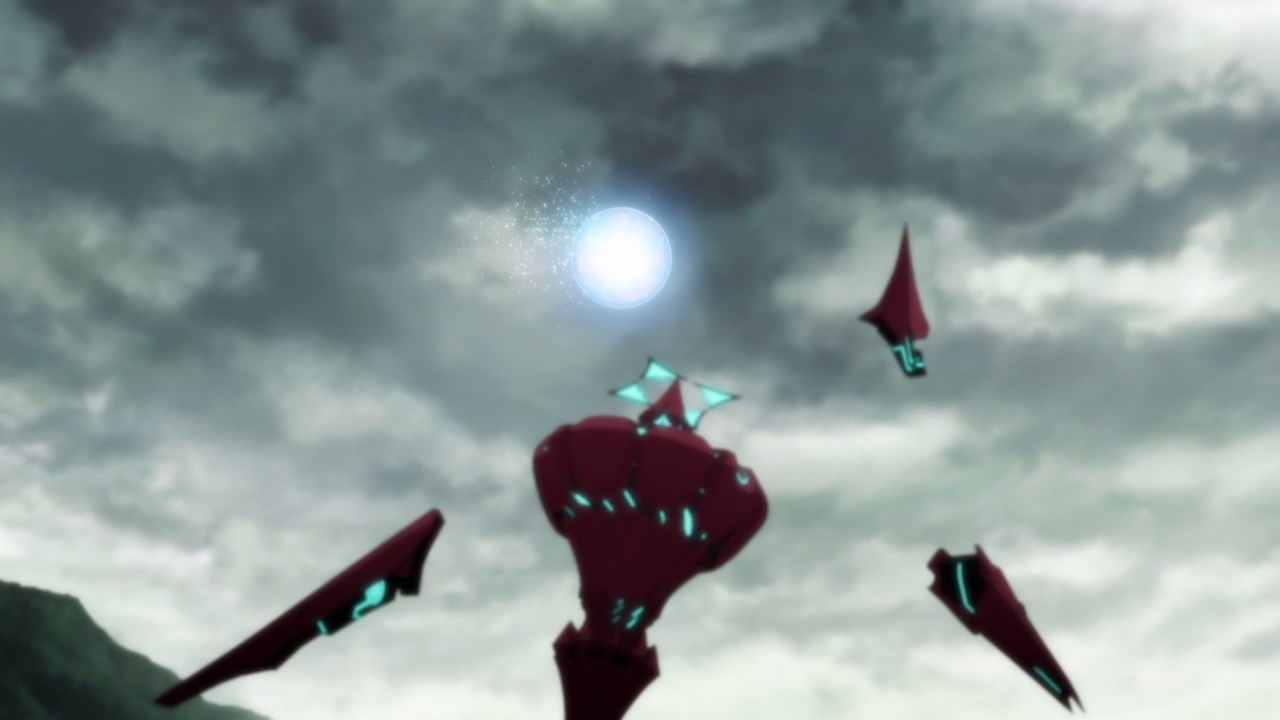 But seriously though, all the Lilies poured so much energy at the bullet that it might destroy the enemy in a single shot. I’m hoping that Yuyu and Riri won’t botch it. 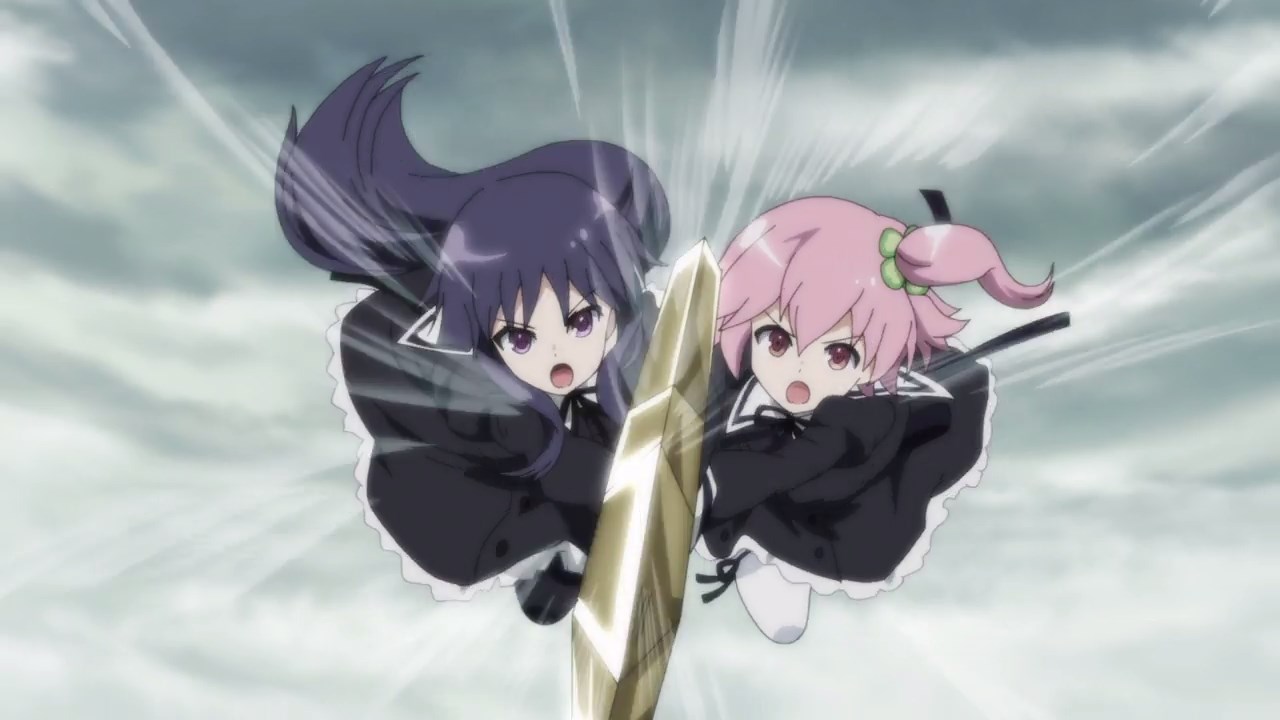 Anyways, here’s both Yuyu and Riri as they’re gonna receive the Neunwelt Bullet. Unfortunately, Riri’s CHARM got broken so she’ll share Dáinsleif together with her Schutzengel instead. 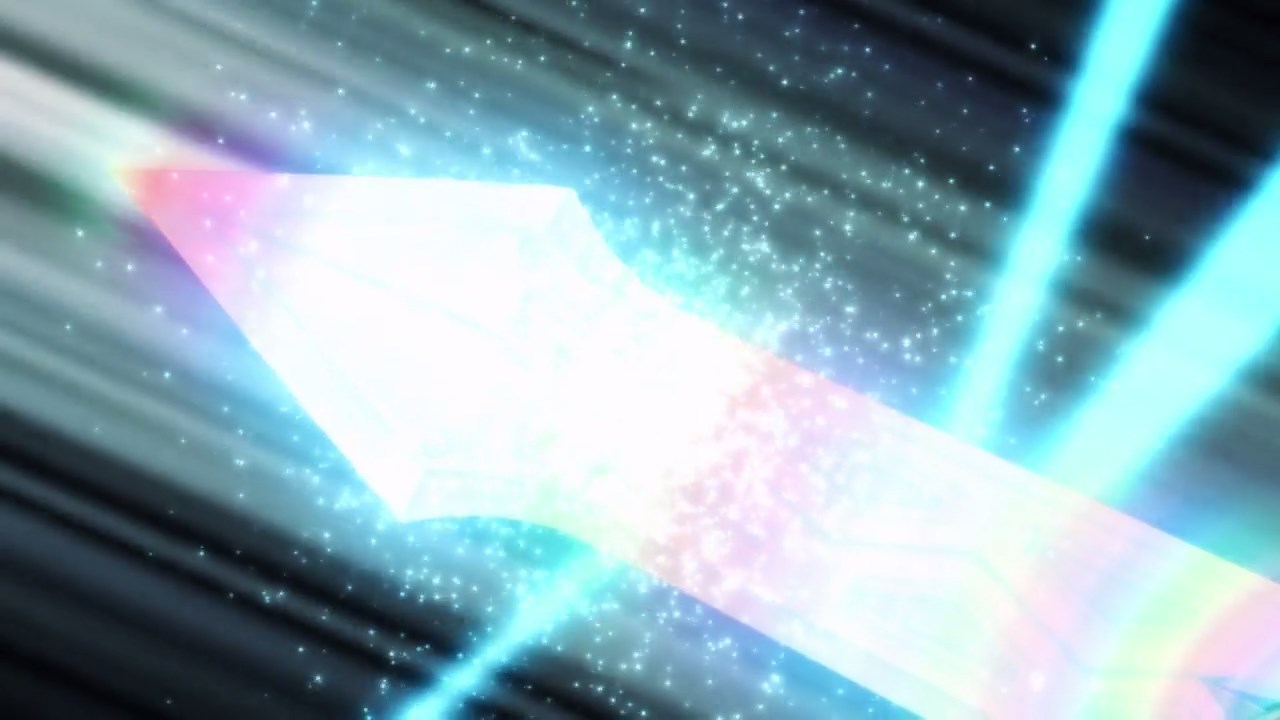 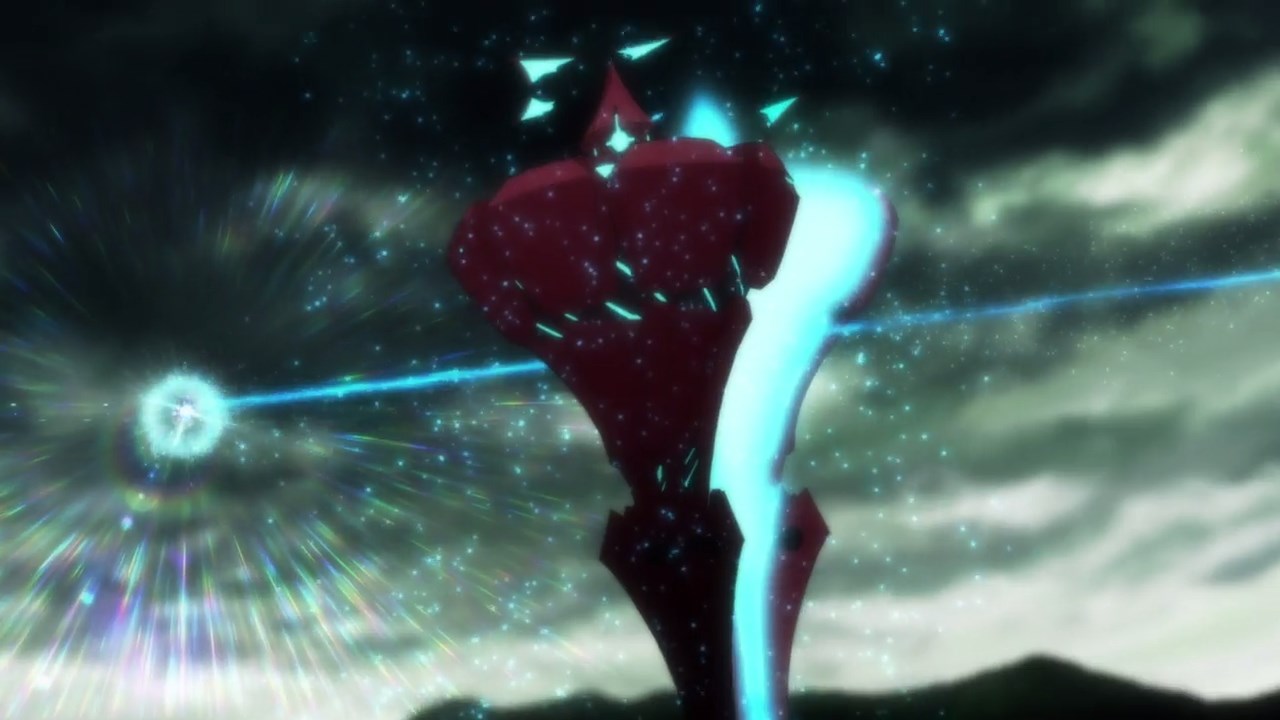 In any case, this battle is finally over as Yuyu Shirai and Riri Hitotsuyanagi defeated the HUGE by cutting it in half. 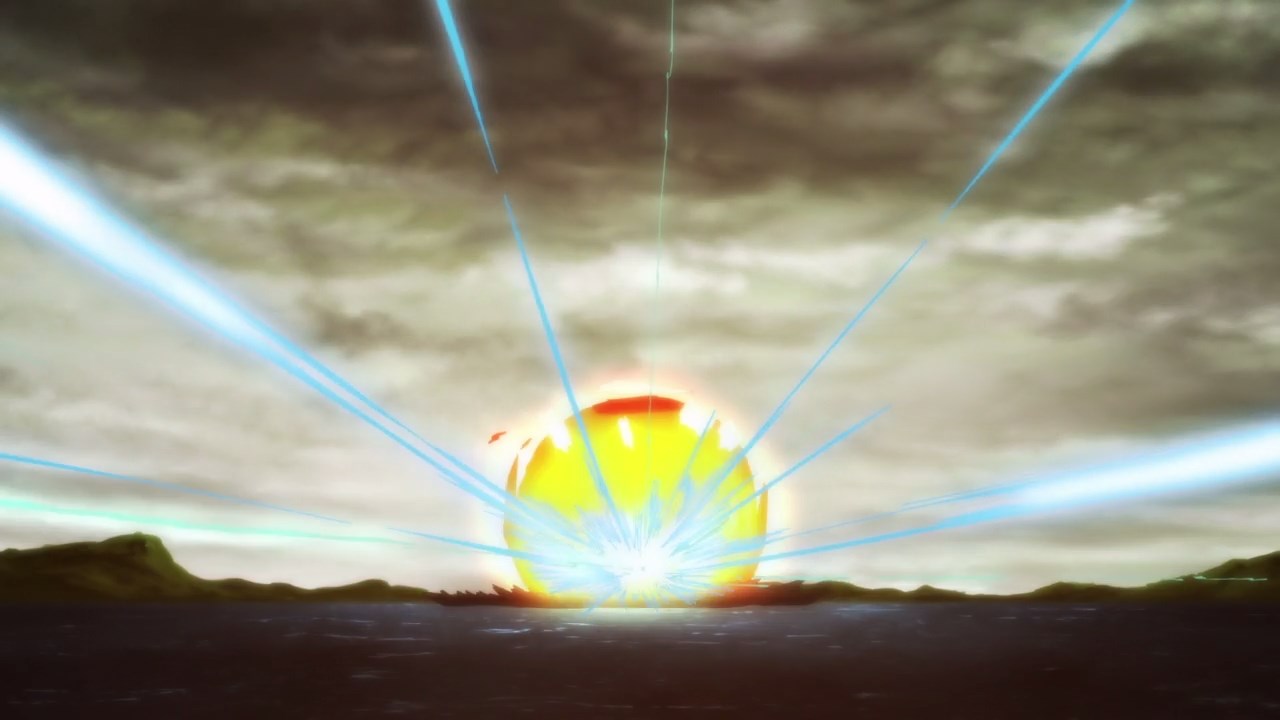 And now, we’ll end this series with a big explosion as Yurigaoka Girls’ Academy is saved.

Well, it’s not yet over though ’cause there is still some unfinished business. After all, Yuyu and Riri only defeated the mid-boss. 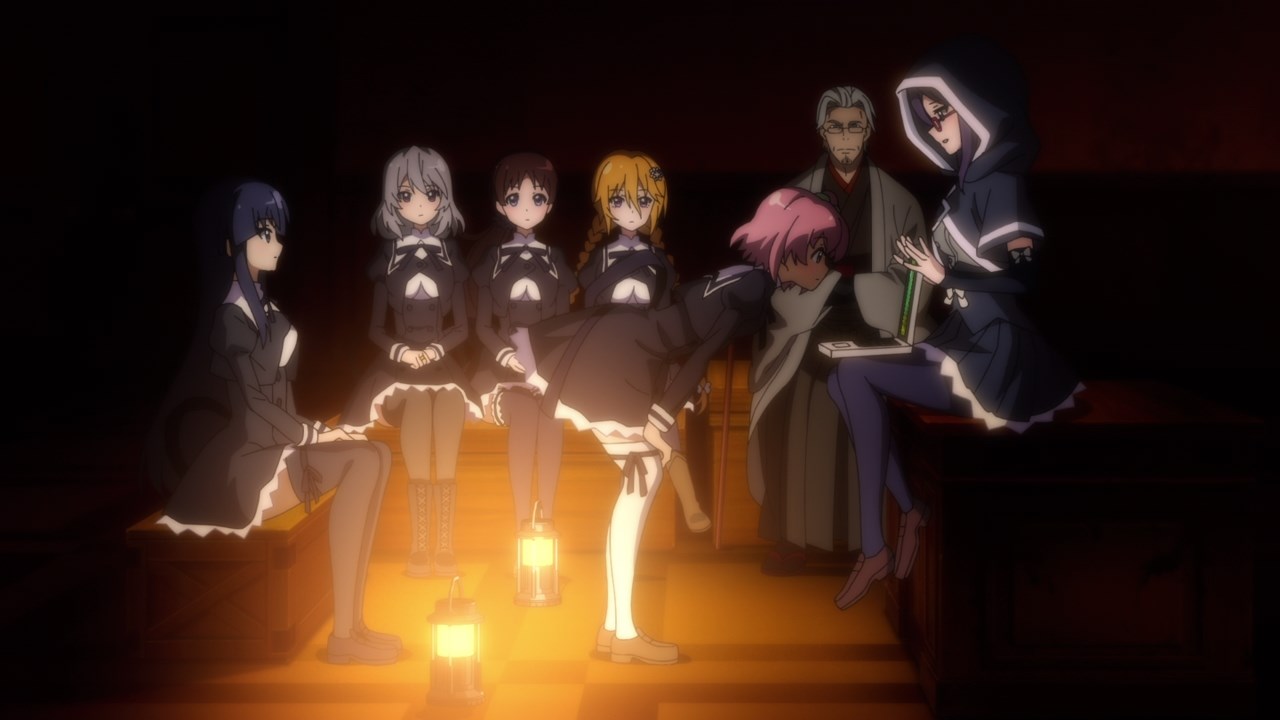 For you see, they still need to destroy the HUGE core which is buried deep underwater as Moyu Mashima pointed out its location. But as for defeating it, the only CHARM that would destroy the core is Dáinsleif as Mashima inserted a virus into the CHARM. 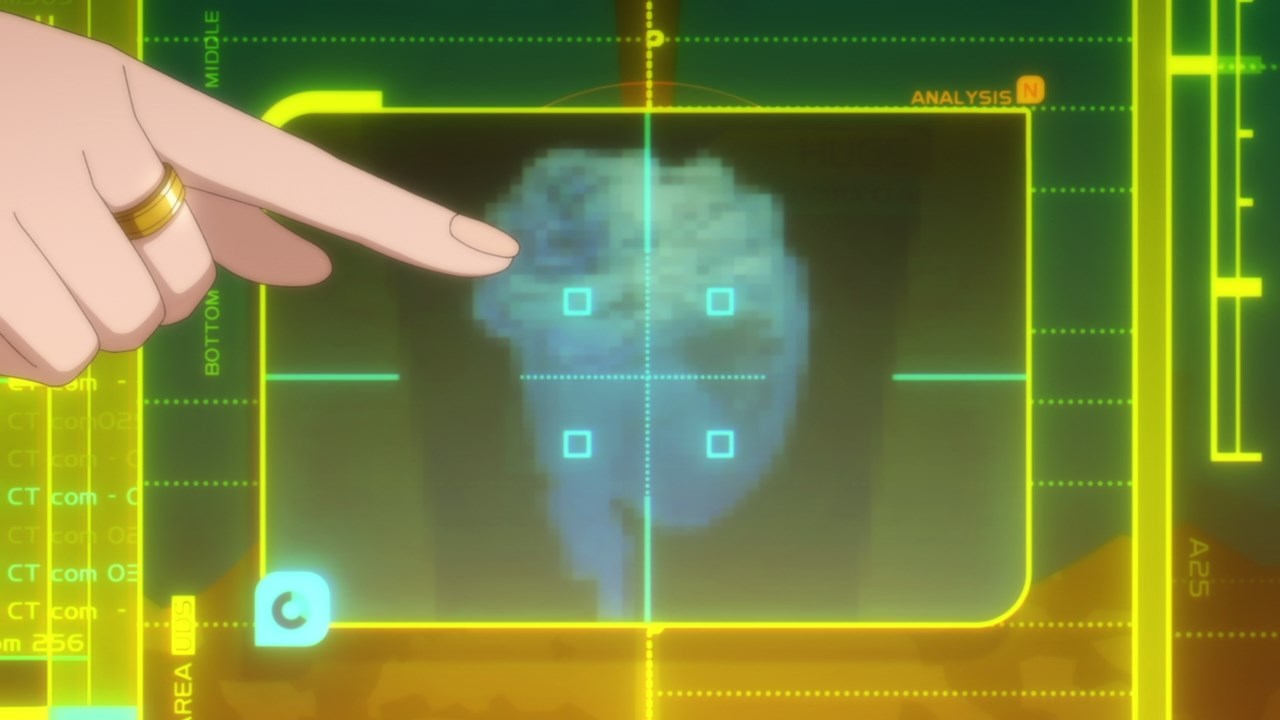 Oh yeah, I forgot to tell you that Yuyu Shirai’s Dáinsleif has Misuzu’s soul inside of it, meaning that it might be useful for destroying the HUGE core unless Kawazoe managed to make it go haywire. 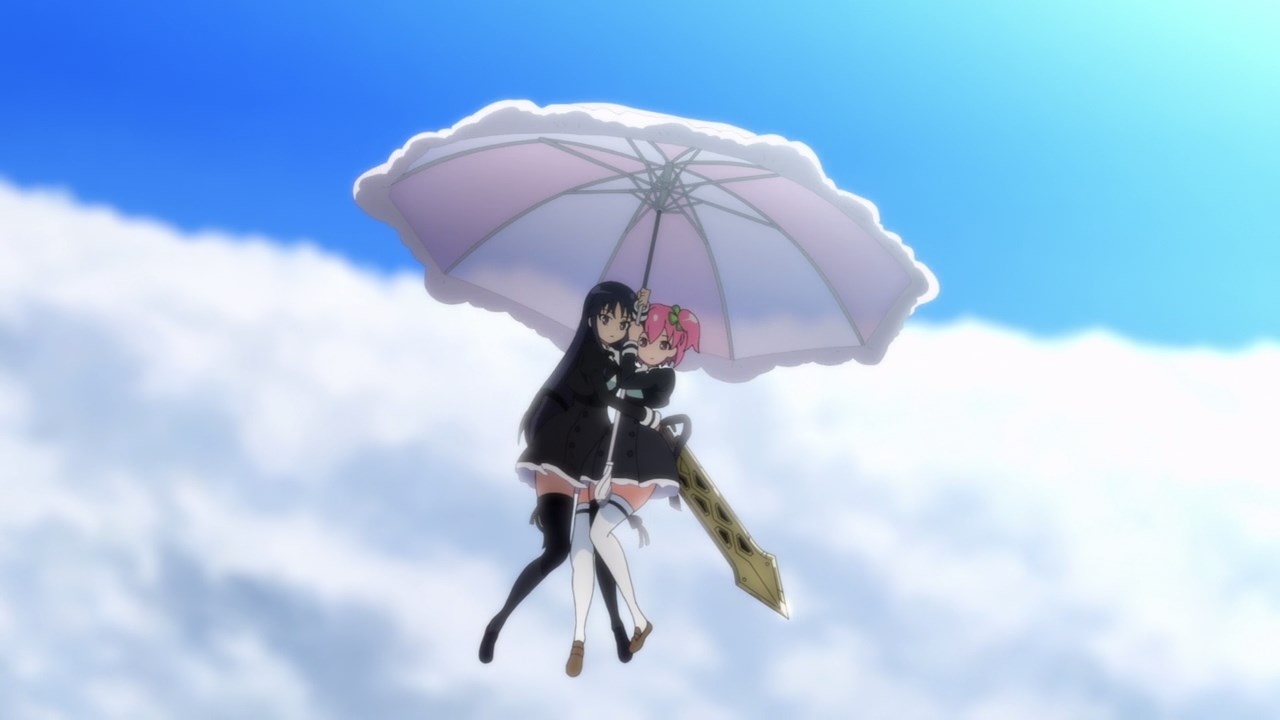 Anyways, it’s time for the final mission as Riri Hitotsuyanagi and Yuyu Shirai will attempt to destroy the HUGE core as they descend towards the bottom of the sea using a parasol. 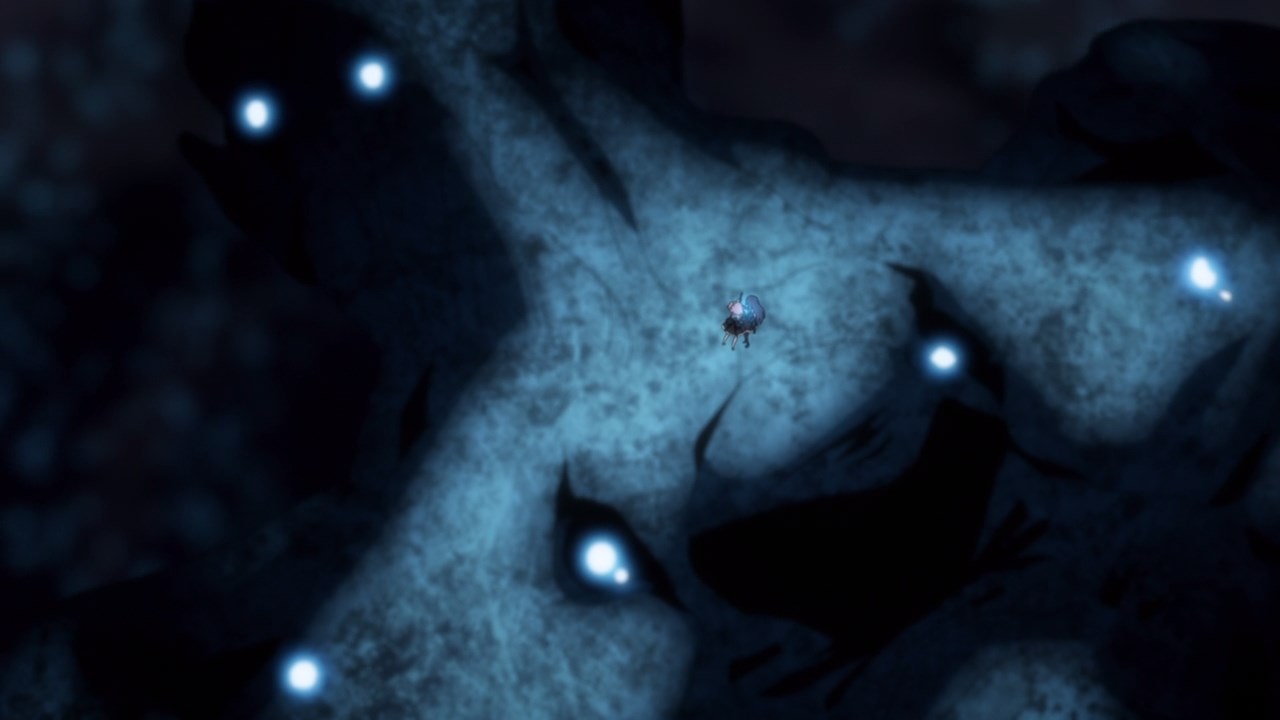 And sure that it’s silly for them to use a parasol, I’m worried about those Lilies getting drowned after destroying the core. 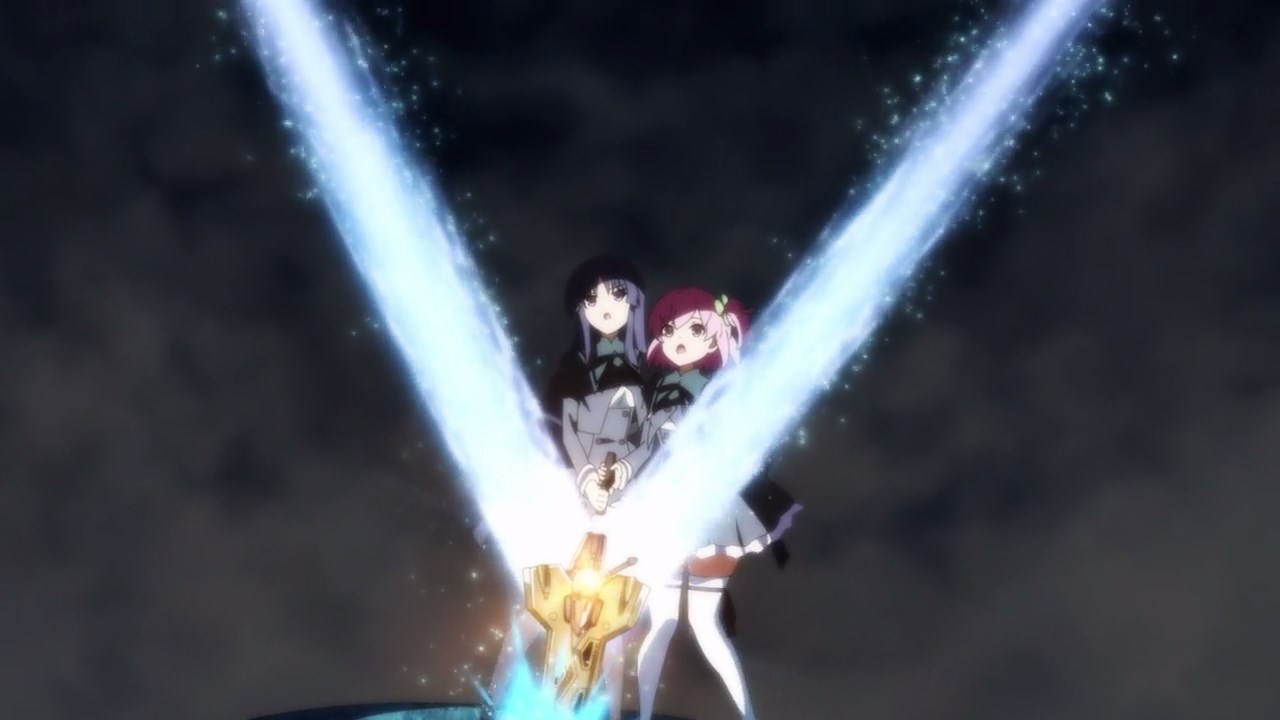 With that said, Yuyu and Riri stabbed the HUGE core using Dáinsleif while the virus will do the rest on destroying the enemy.

On the other hand, it seems that Yuyu-sempai managed to put Misuzu Kawazoe’s soul to rest as she’s no longer haunted by her former Schutzengel. 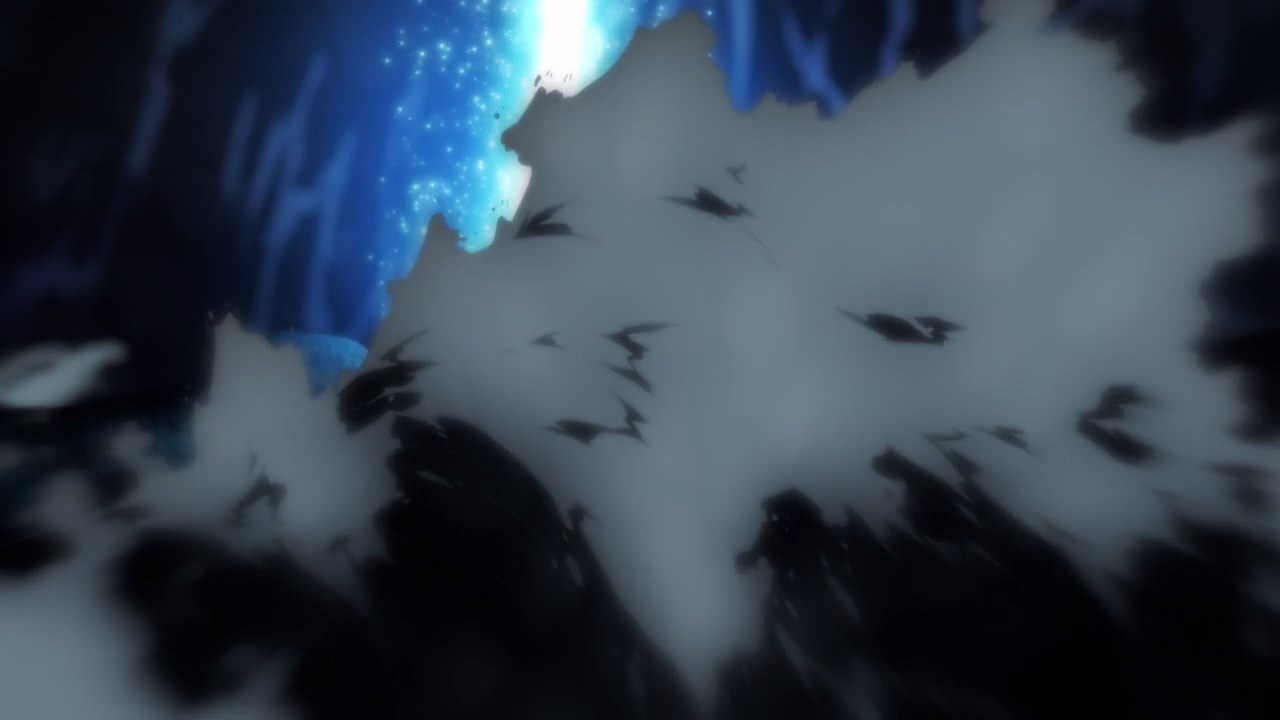 Unfortunately after stabbing the core with Dáinsleif, looks like Yuyu Shirai and Riri Hitotsuyanagi got flooded in where they can’t survive the deep sea and therefore they’re dead. 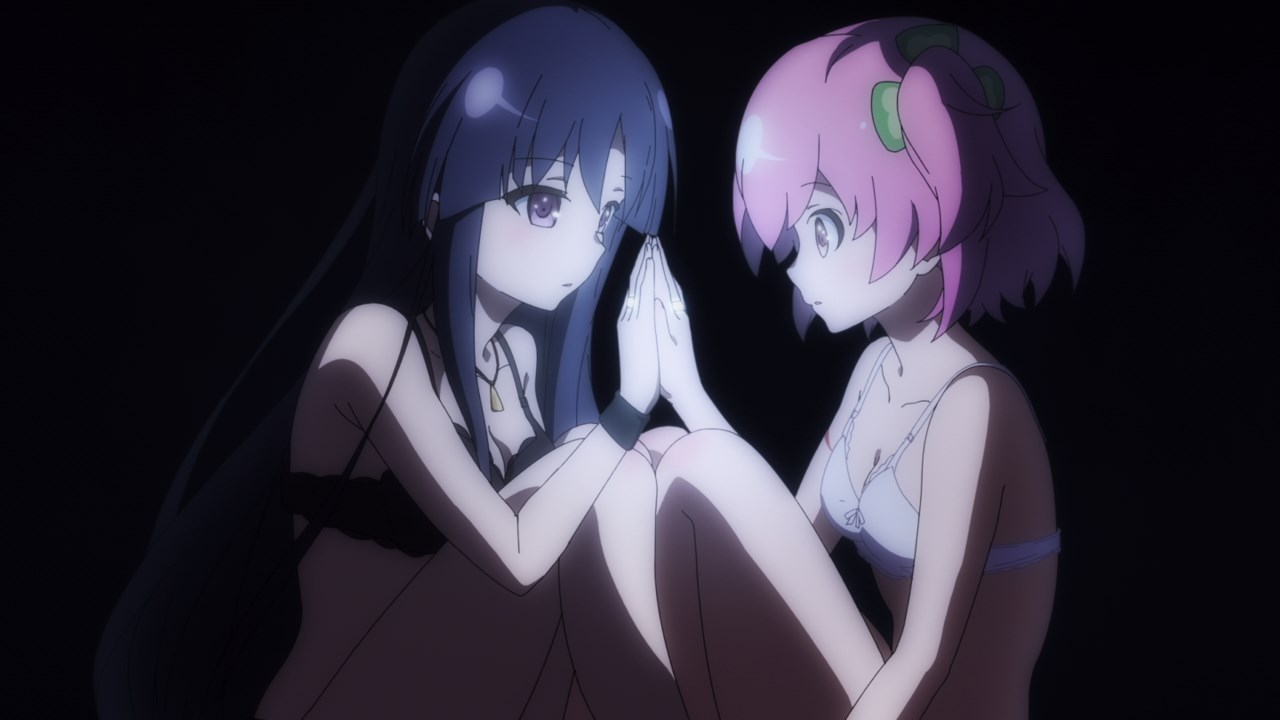 But yeah, it looks like Assault Lily: Bouquet has ended where Yuyu and Riri will join their daughter up in heaven.

Seriously though, Studio SHAFT really wanted to end this show like in Puella Magi Madoka Magica where the protagonists sacrificed their lives to save the world. 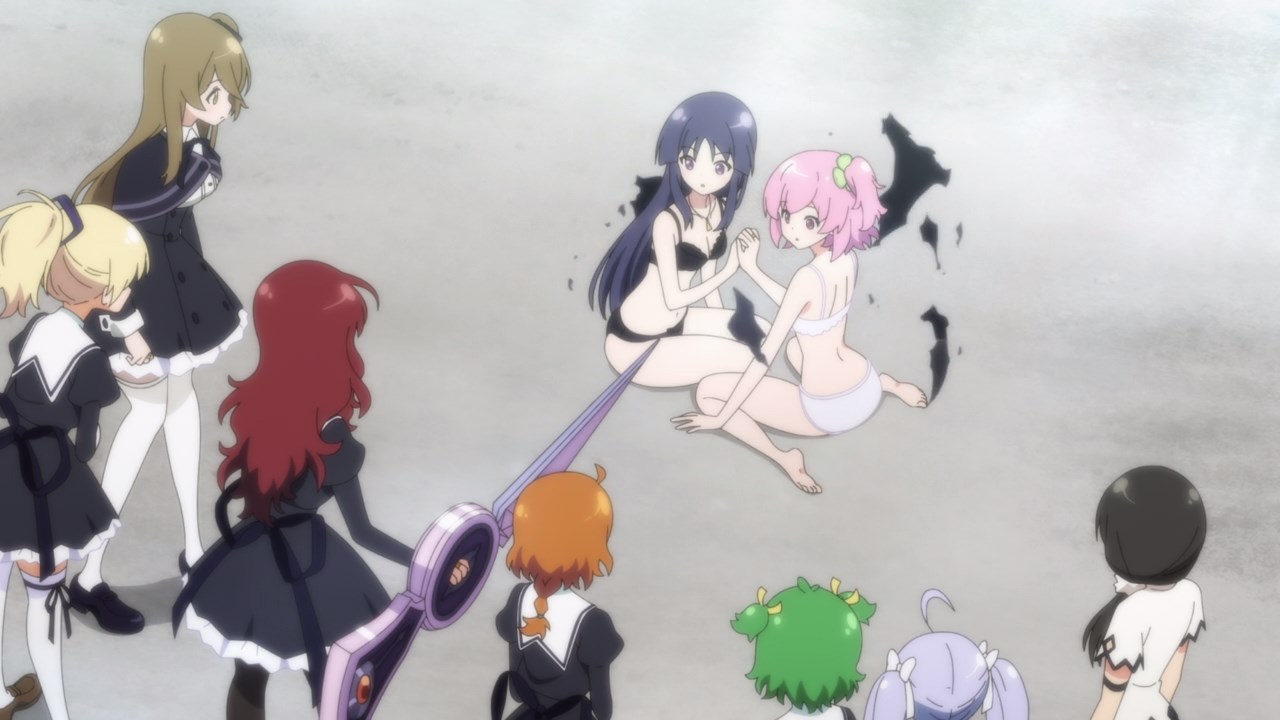 On second thought, never mind about the sacrifice thing as it turns out that Yuyu and Riri are actually alive by creating a black bubble to survive the deep sea. 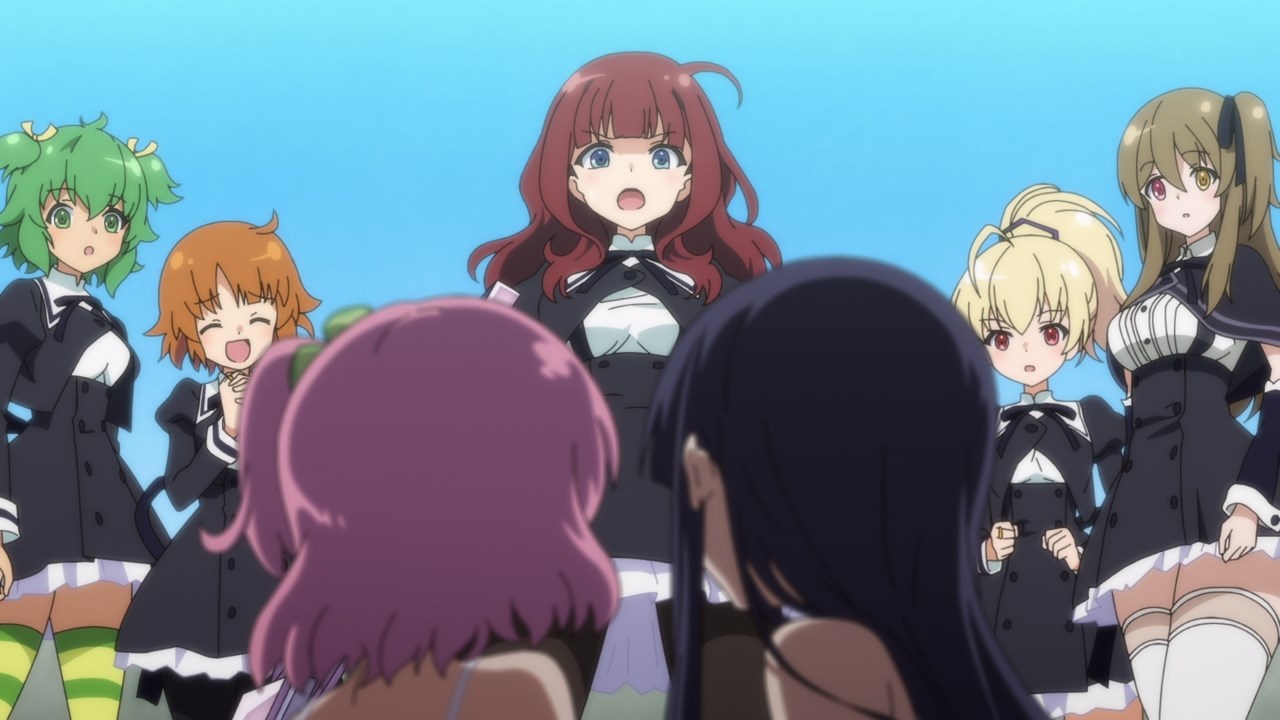 And while they didn’t end up like Madoka Kaname with the heroic sacrifice, I think they should get some clothes as Kaede Johan Nouvelle doesn’t like both girls wearing nothing but their underwear. 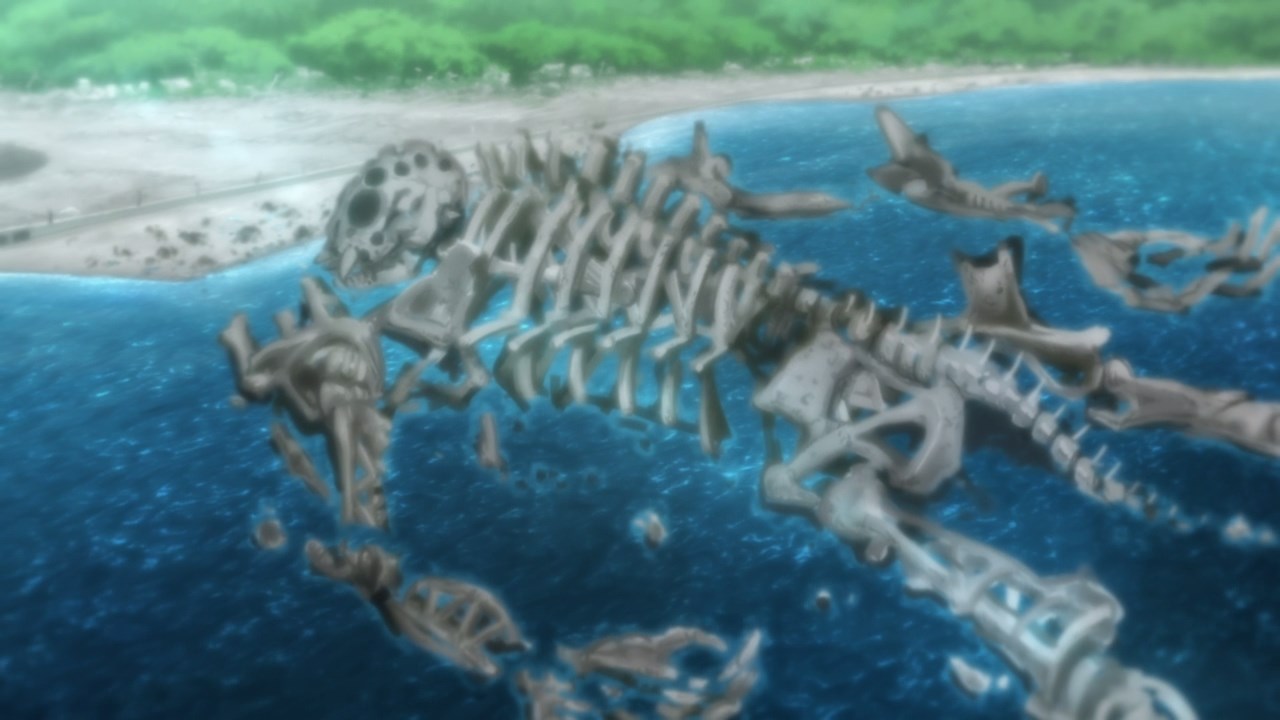 One last thing, here’s the HUGE core or should I say the remains of a colossal HUGE that was buried in the deep blue sea. Forget about Misuzu Kawazoe as the final boss ’cause this one takes the cake!

And that’s the end of Assault Lily: Bouquet where Studio SHAFT did an amazing job of making a spectacular anime series. On the other hand, while the character development for both Riri Hitotsuyanagi and Yuyu Shirai are okay, some characters like Fumi Futagawa and Tazusa Andou needs more attention. Then again, the only one that comes close when it comes to development is Kaede Johan Nouvelle where she’s linked to a major CHARM manufacturer.

Aside from the characters, the world of Assault Lily needs some exploration in my opinion, like how the HUGE came to Earth as well as GEHENA’s true objective. Personally, I have a feeling that Bushiroad will expand the world of Assault Lily through various media such as stage plays and a gacha game, as well as AZONE’s line of dolls which it’ll have a little sales boost after the TV anime has ended its run.

But that’s about it for this action-packed yuri show as I say goodbye to the Lilies of Yurigaoka Girls’ Academy!