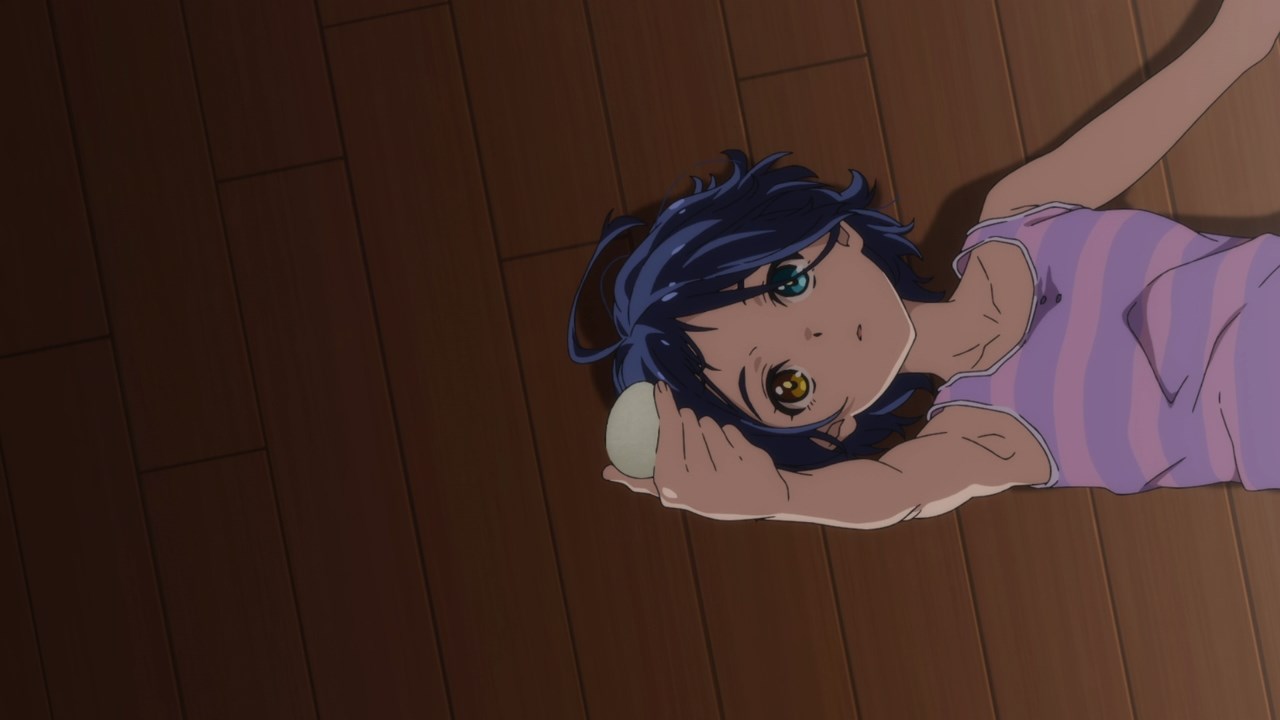 This is Ai Ohto where this girl with mismatched eyes received a mysterious egg and I don’t know how she got it. And by the way, this is CloverWorks’s original anime and while they got some help from the past like Studio Trigger, they created this anime series on their own.

With that said, this is Wonder Egg Priority and I have to say that this is one weird show, especially the first episode where I just screamed “WTF!?” upon watching some of the fever-dream scenes. 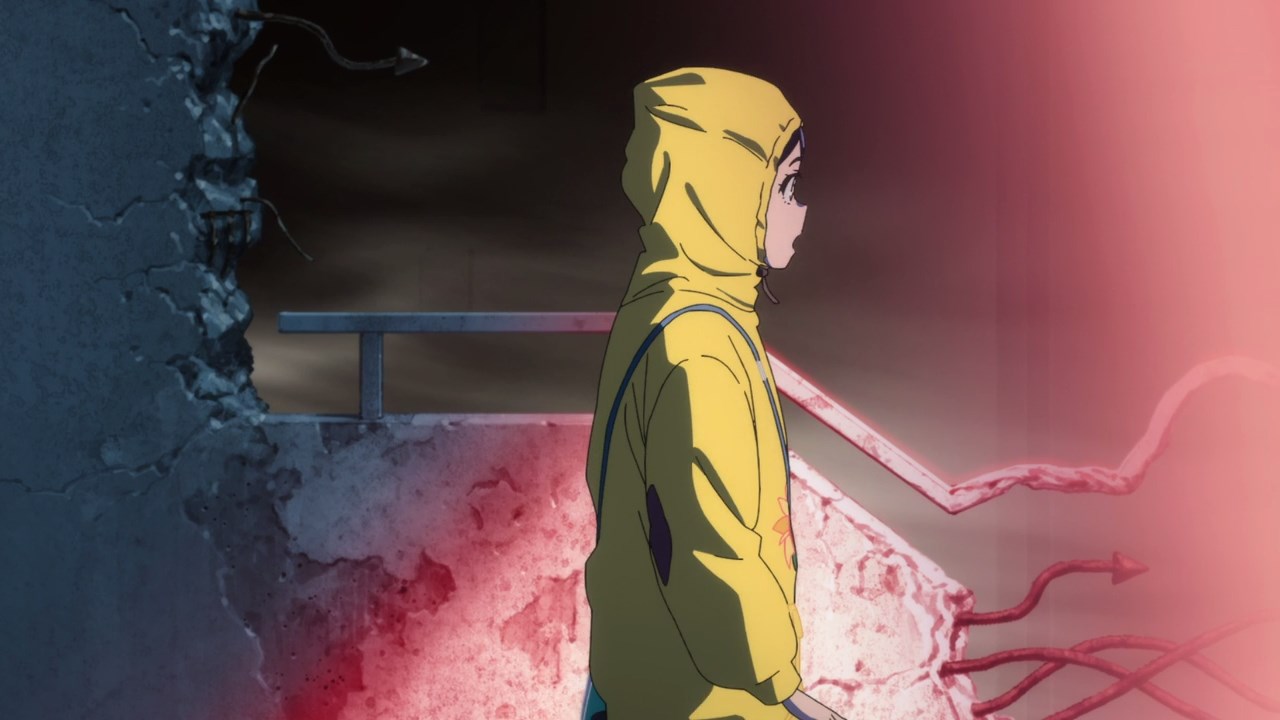 Anyways, let’s start with Ai Ohto where she still has her egg, but Ai-chan went to another world upon stepping out of her apartment. 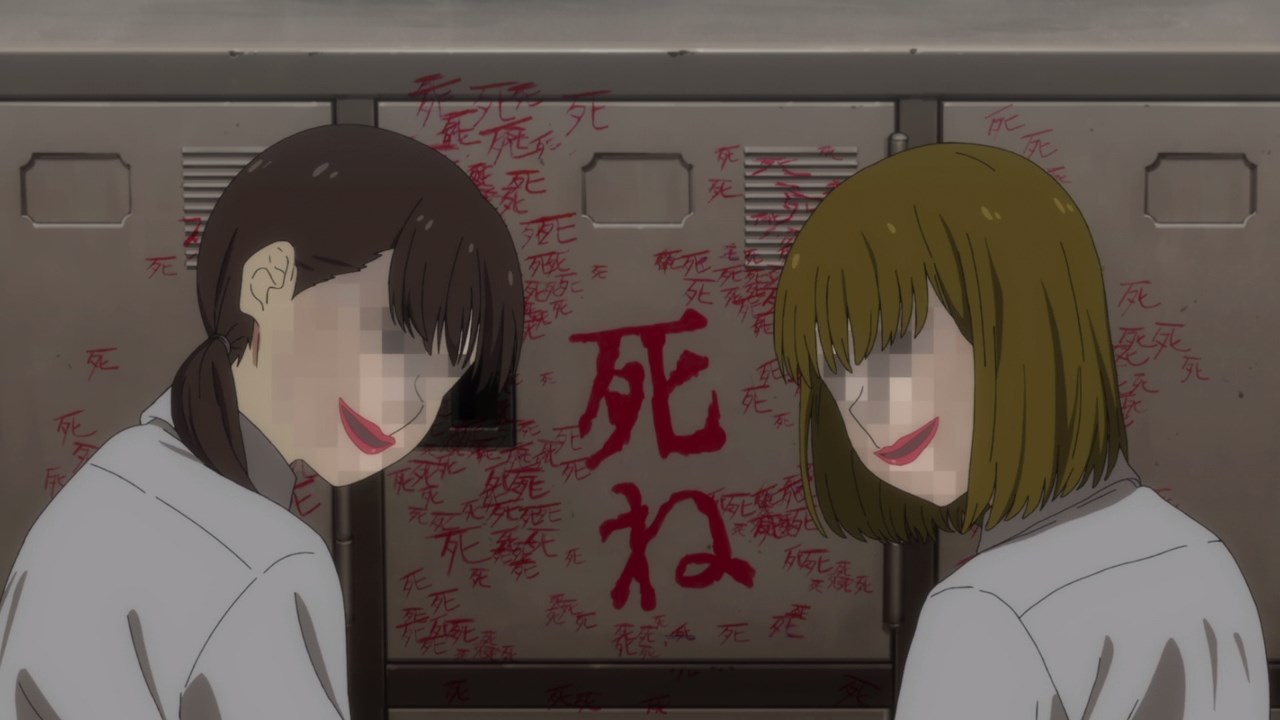 Not only that, but Ai-chan saw two girls who are vandalizing this locker by writing “Die!” and other mean words. Ugh, I feel that someone is getting bullied. 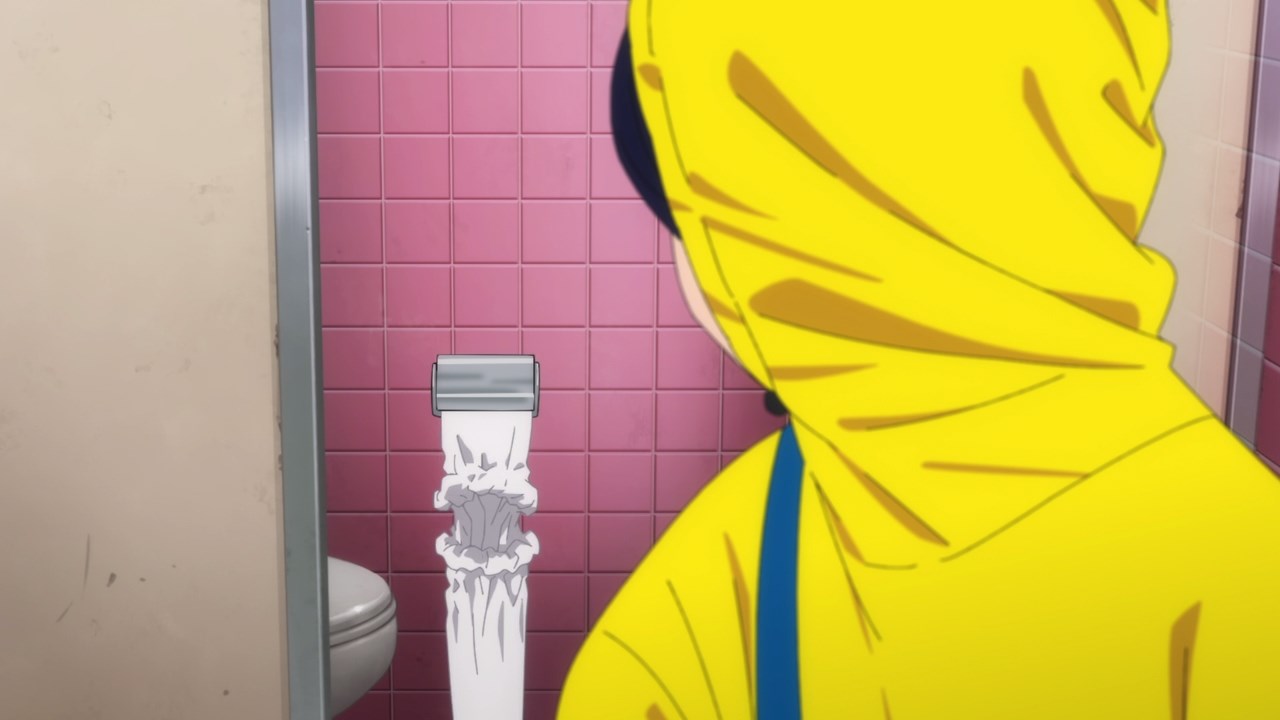 Now then, looks like Ai Ohto is being told by this talking tissue paper to break the egg at once. Then again, Ai-chan can’t even break the egg before. 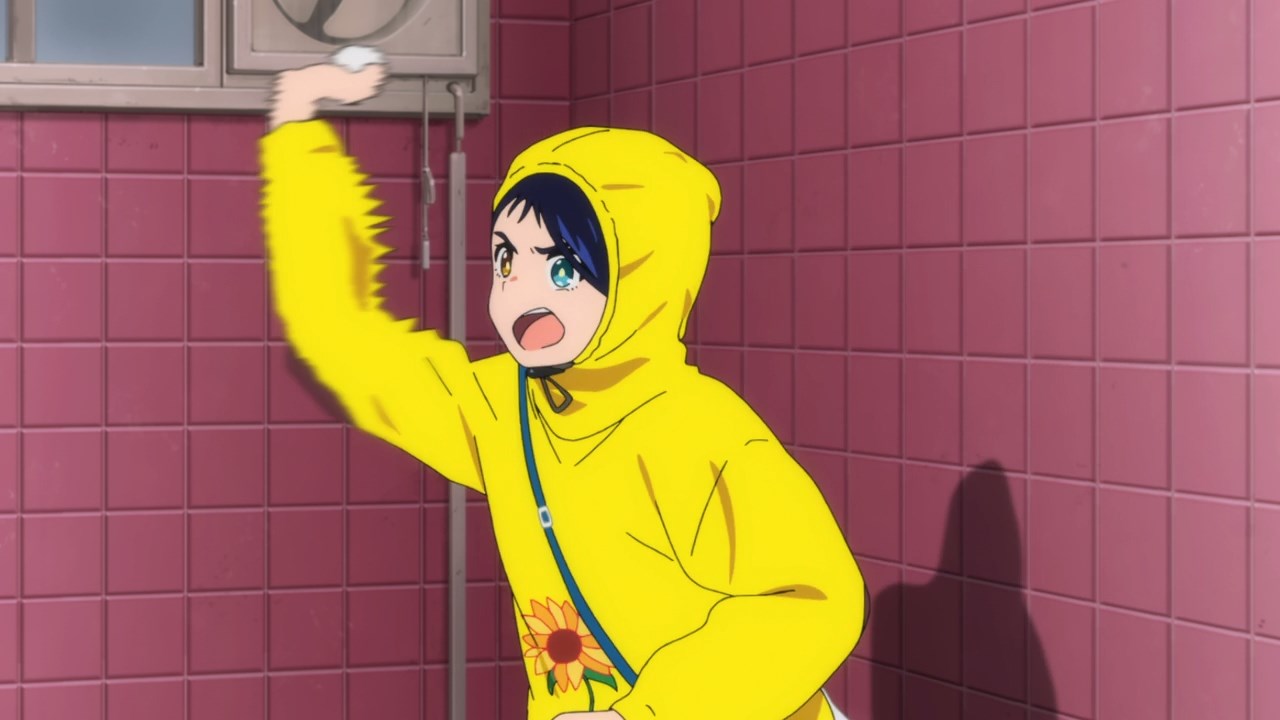 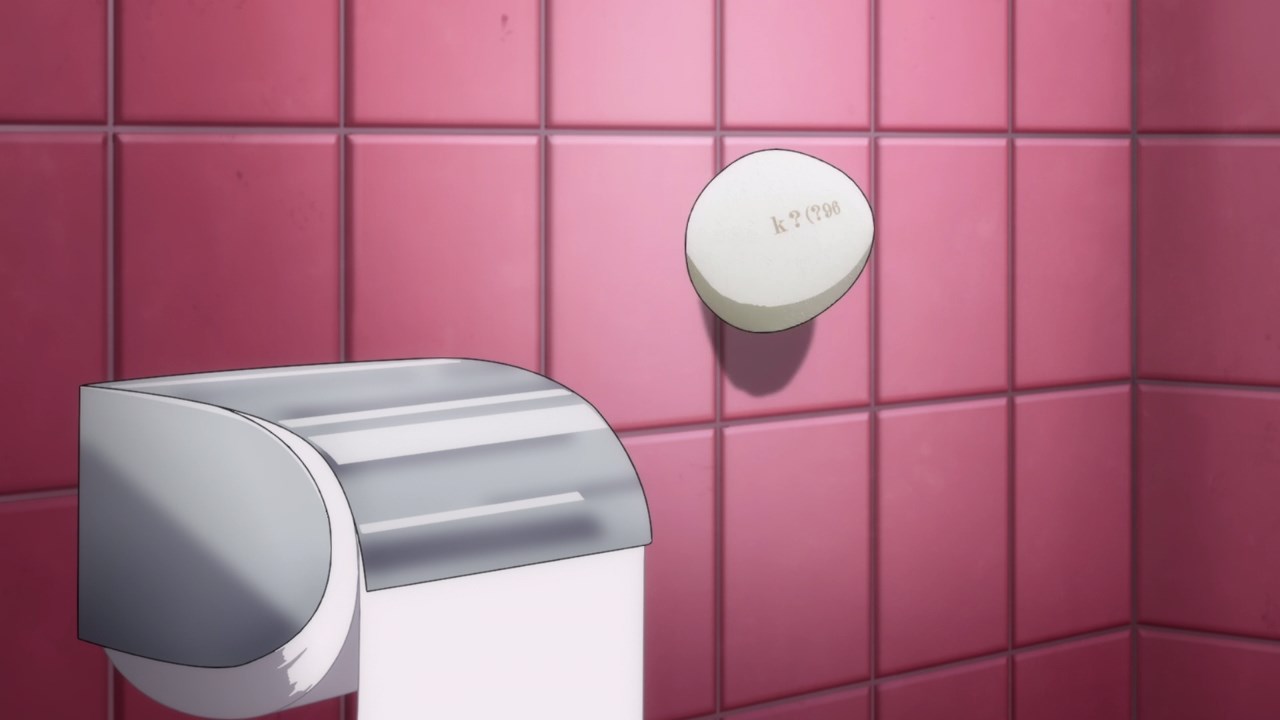 Well then, how about she throws the egg towards the wall like a baseball. Of course, I wonder if that method would work since the egg is pretty hard to crack. 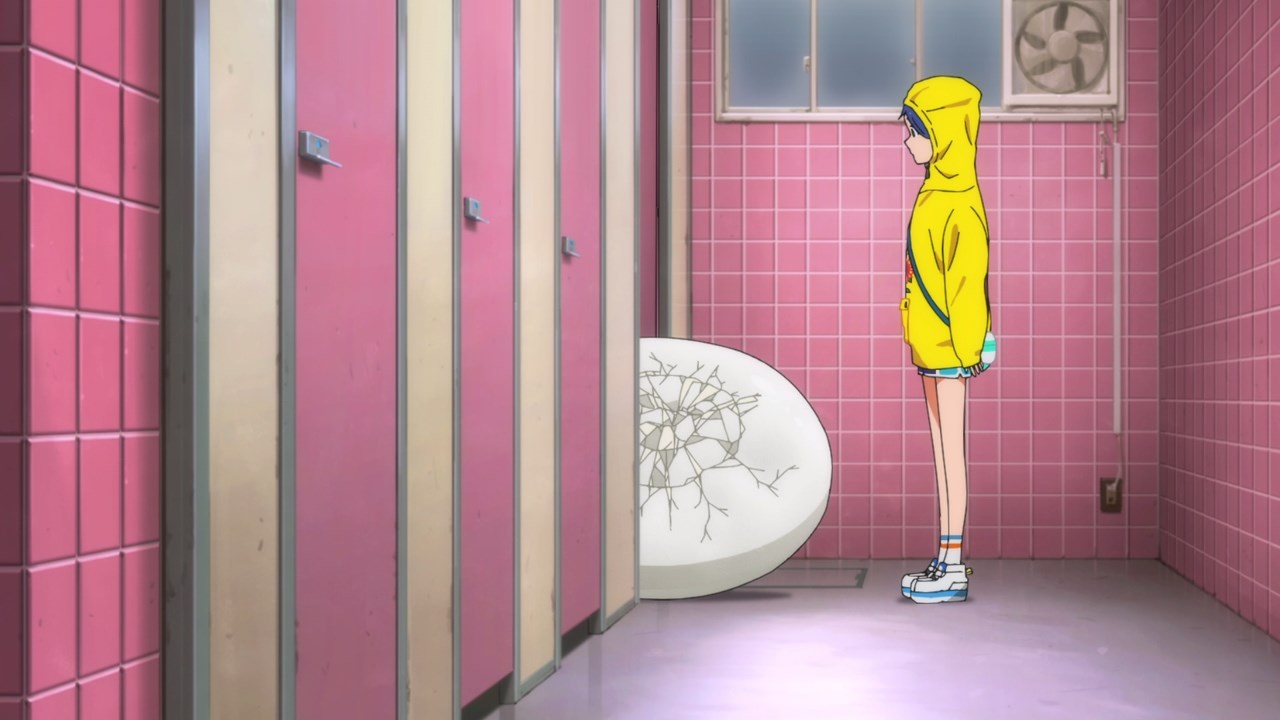 Fortunately, the egg got a crack after Ai-chan throw it towards the wall, but the egg goes bigger for some weird reason… 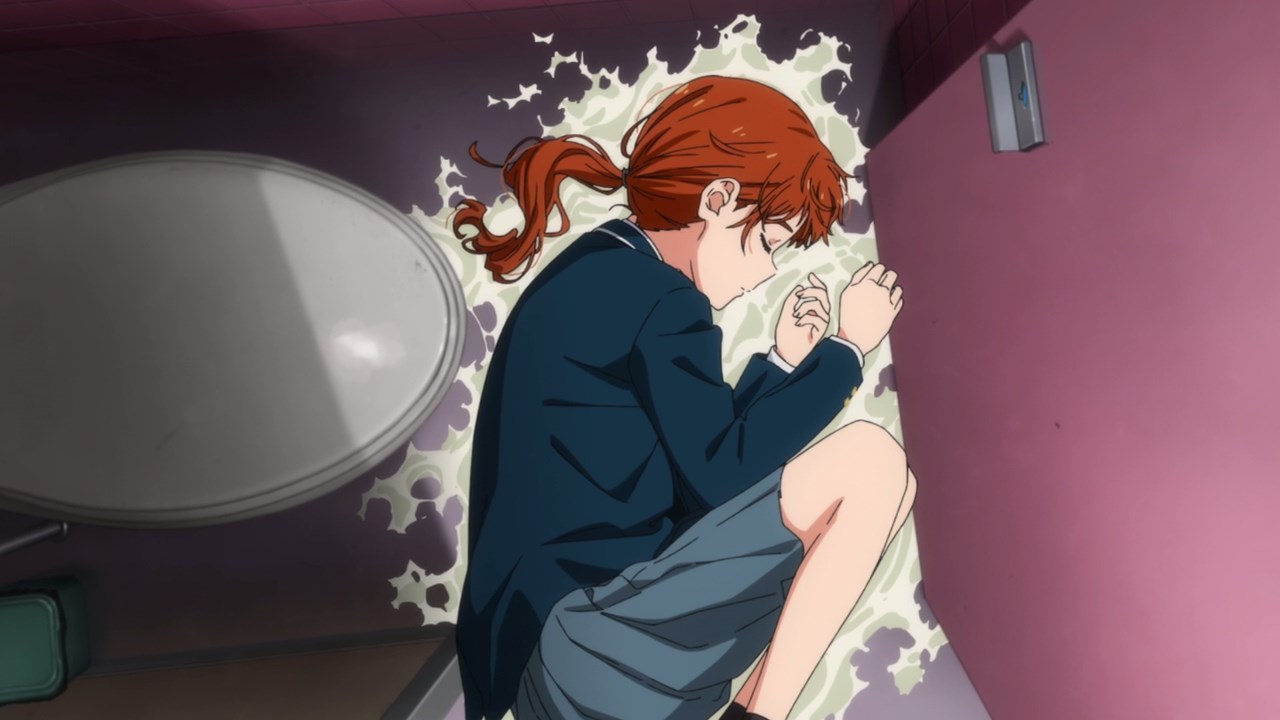 …until it hatches into this girl named Kurumi Saijou. Okay, is this real-life or just a dream because I’m having an acid trip? 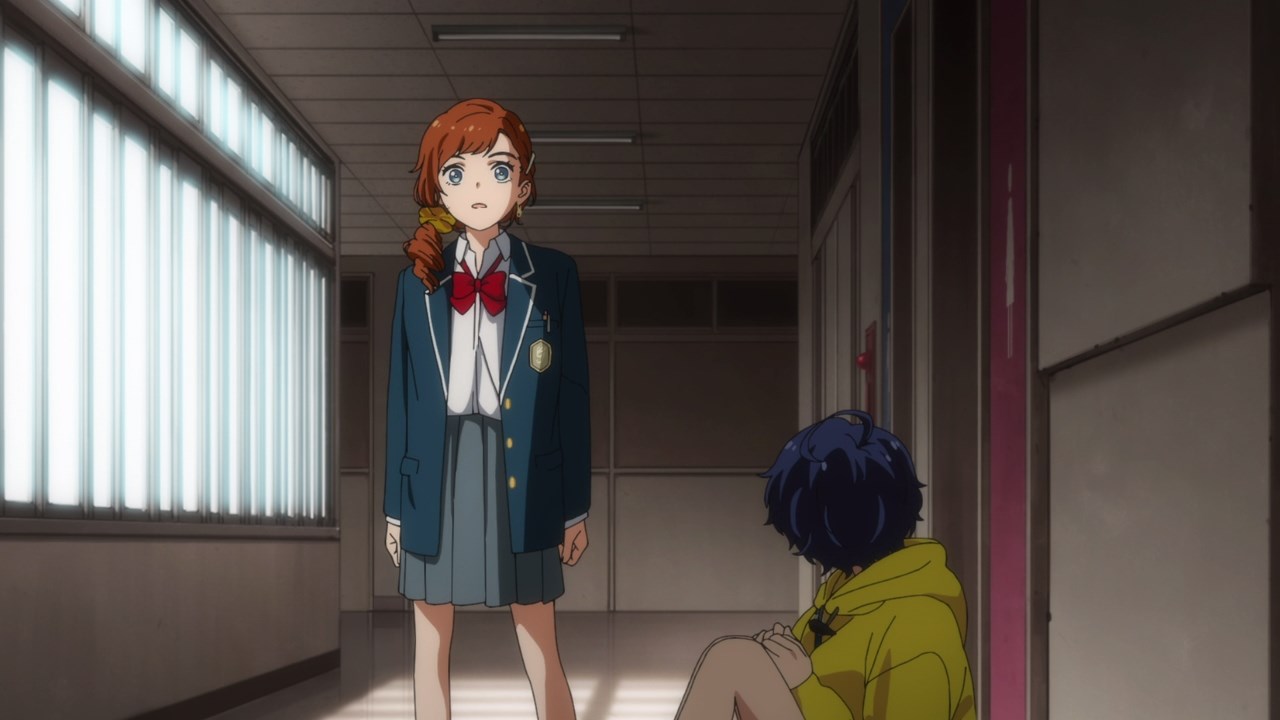 But speaking of Kurumi, the reason for her hatching is because she’s trying to survive from weird monsters like the See No Evil. 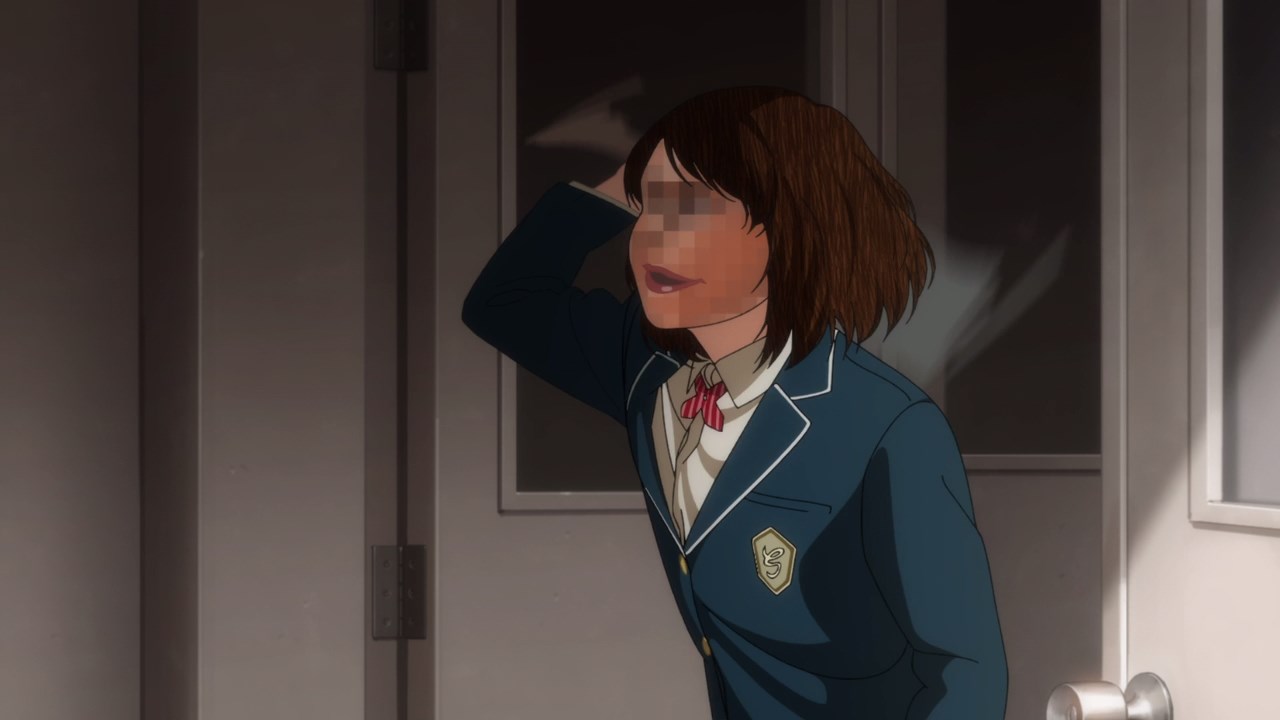 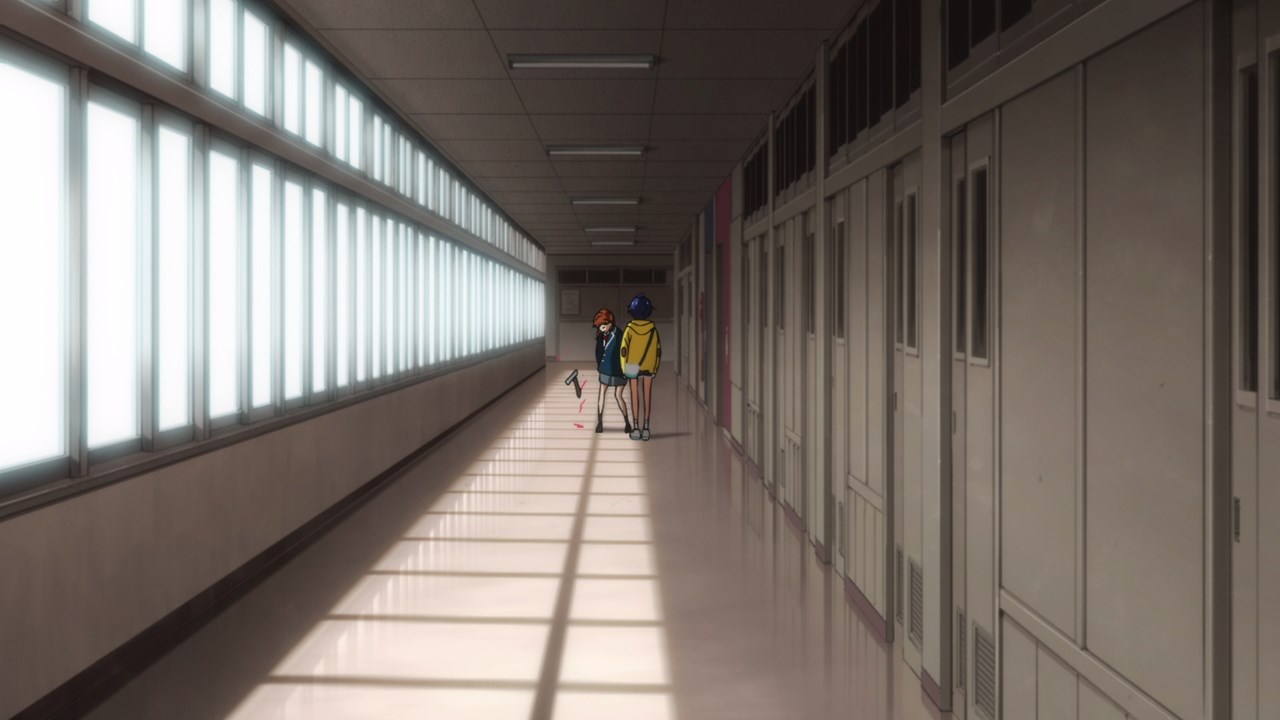 Oh, and here’s one right here where she throws a freaking axe towards Saijou. Yeah, that’s gonna hurt for Kurumi, but it turns out that her right arm can heal quickly. 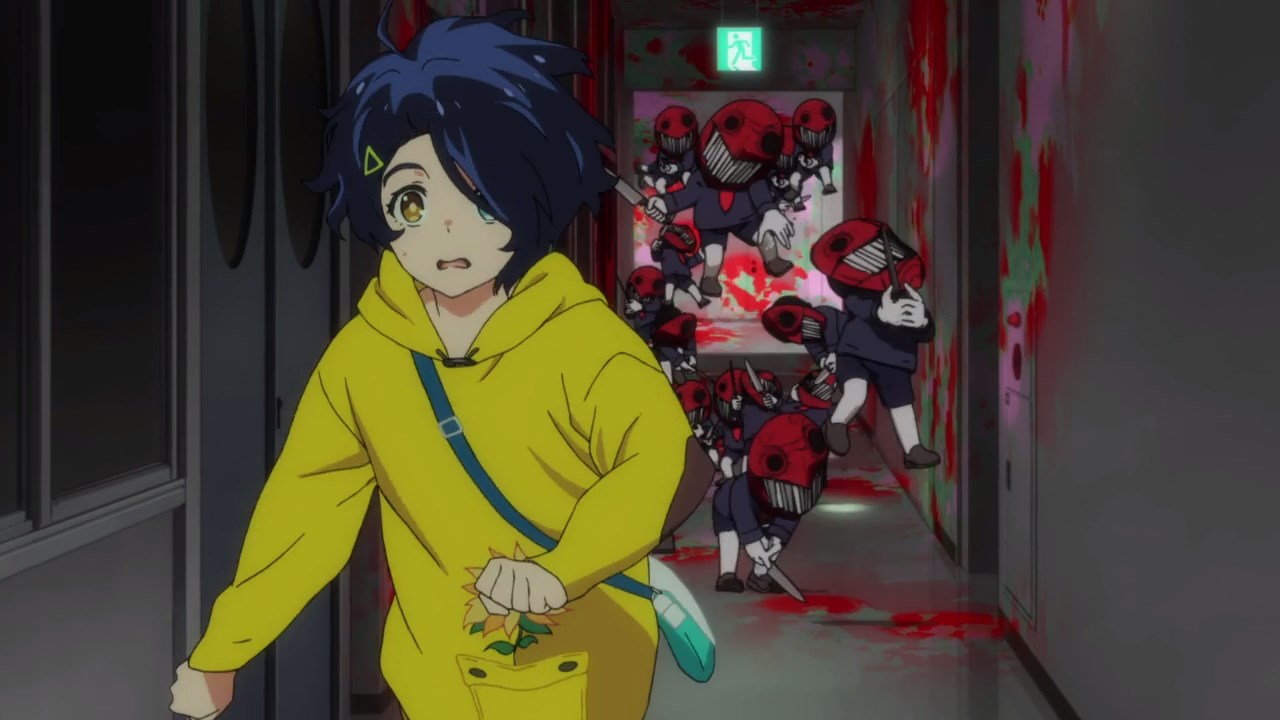 Regardless, the See No Evil are menacing that running is the only option for both Kurumi Saijou and Ai Ohto. I mean, these monsters are so deranged that fighting them is impossible. 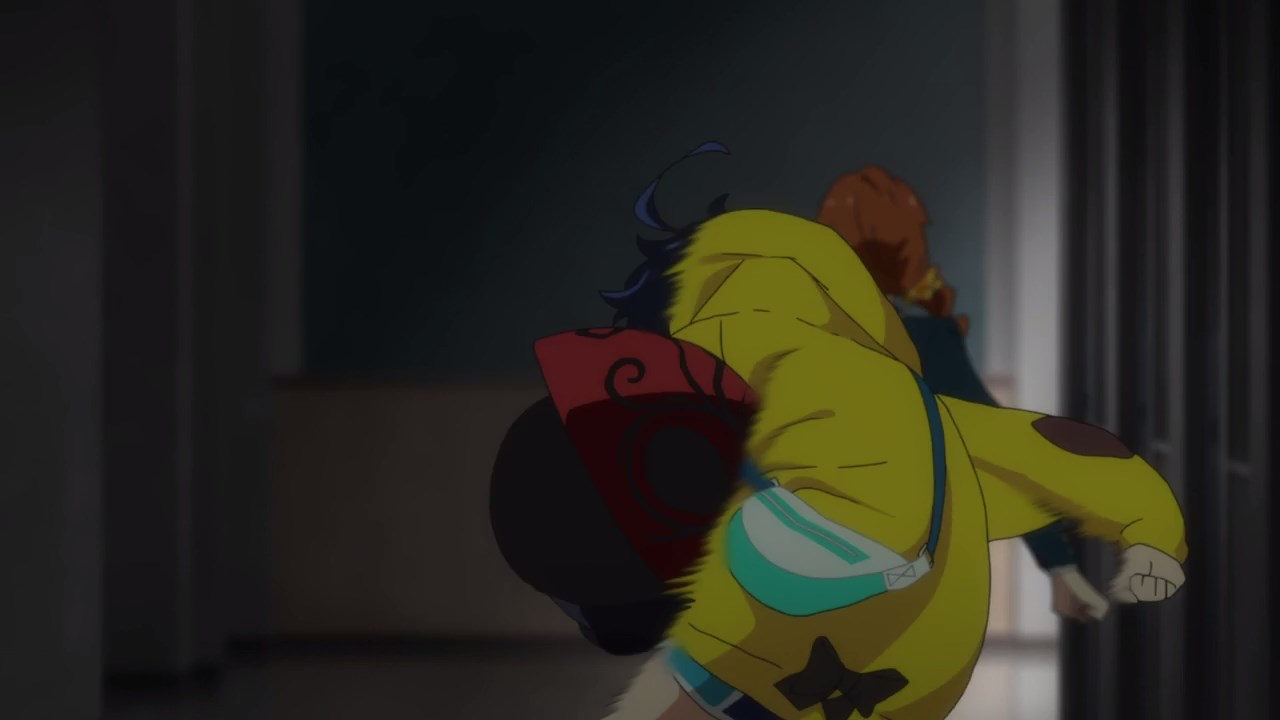 But it gets worse when the See No Evil attacked Ai-chan from out of nowhere. That’s gotta hurt! 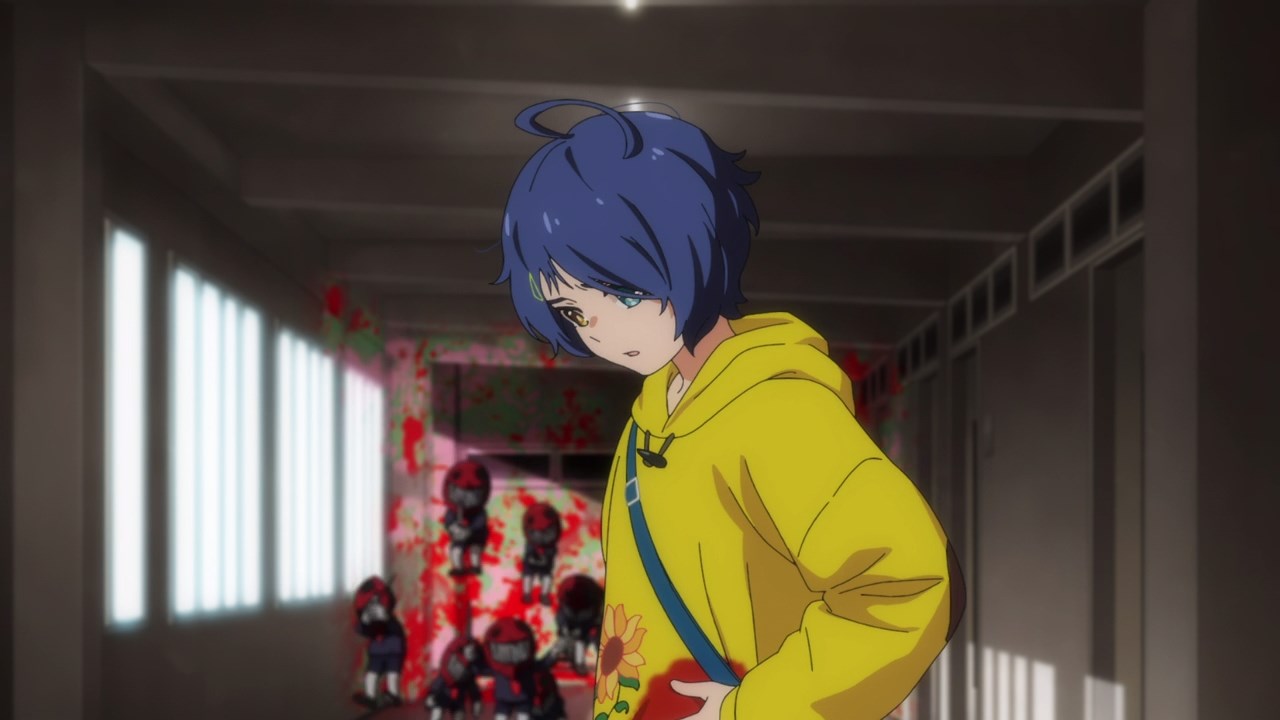 So much that Ai Ohto is bleeding as her liver got stabbed. I’m not sure if she’s gonna stay alive after getting pounced by the See No Evil, but what about Kurumi Saijou? 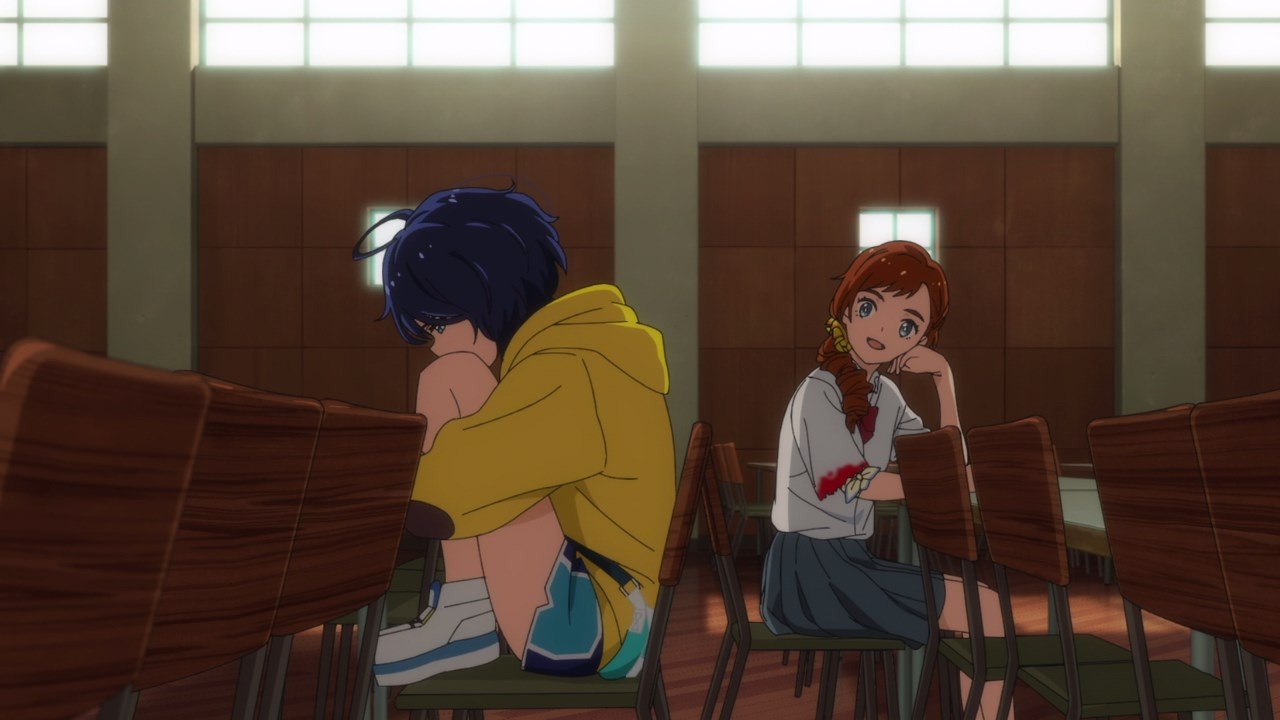 Well, she’s still alive though but Kurumi will have leave Ai-chan as she’s the only one being targeted by the See No Evil. While Ohto is safe, I don’t want Saijou getting killed on this strange world! 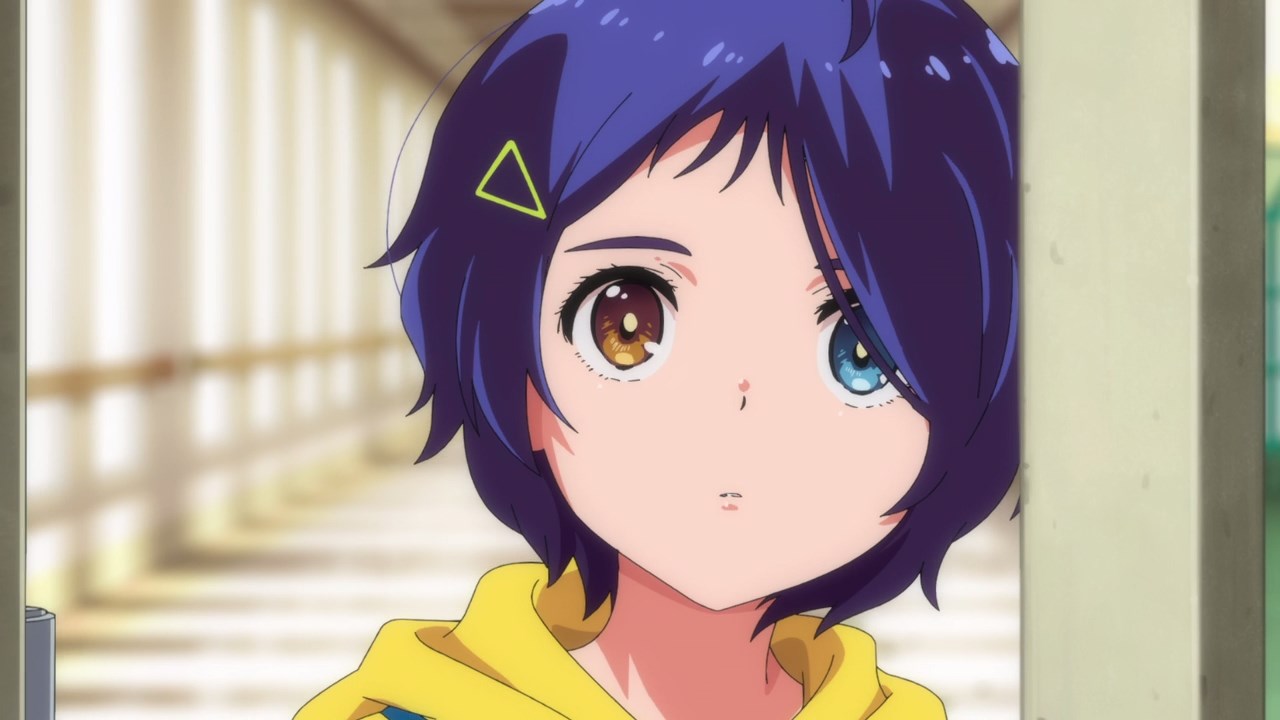 Now let’s move onto the next scene where Ai Ohto saw something at the rooftop. 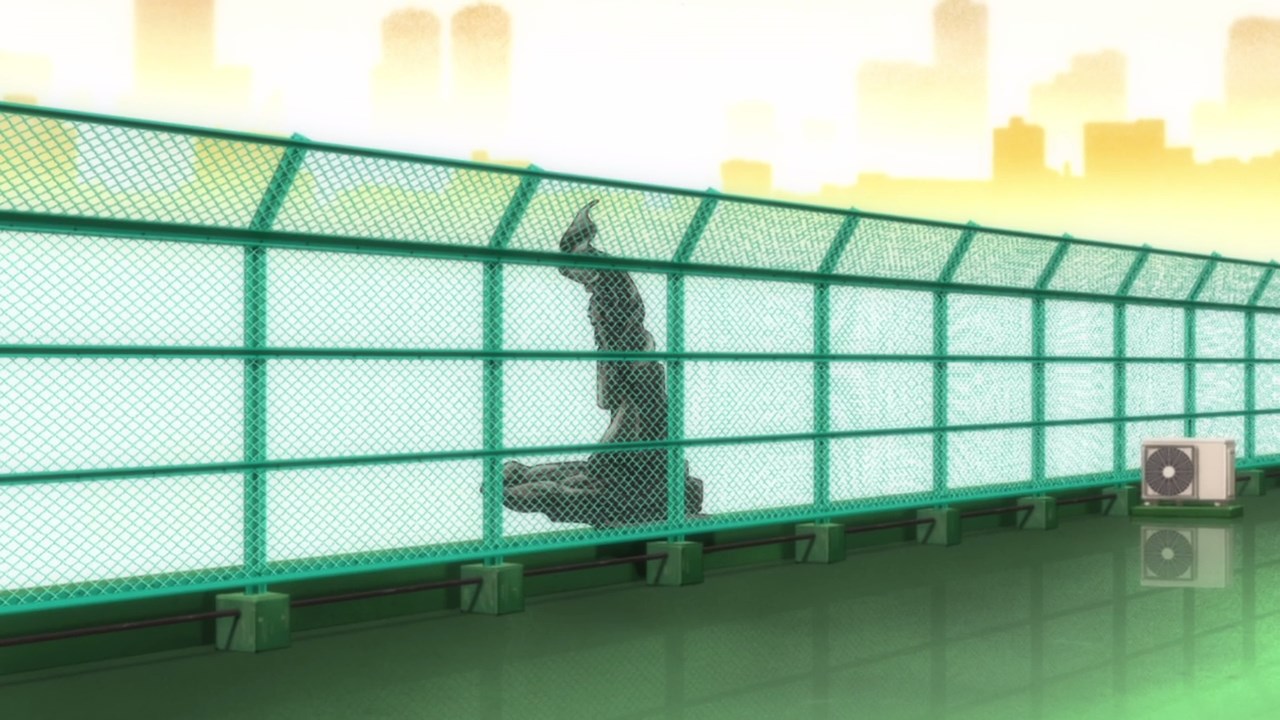 It’s a statue of a woman who is standing at the edge. By the way, Ai-chan remembered someone from her middle school days. 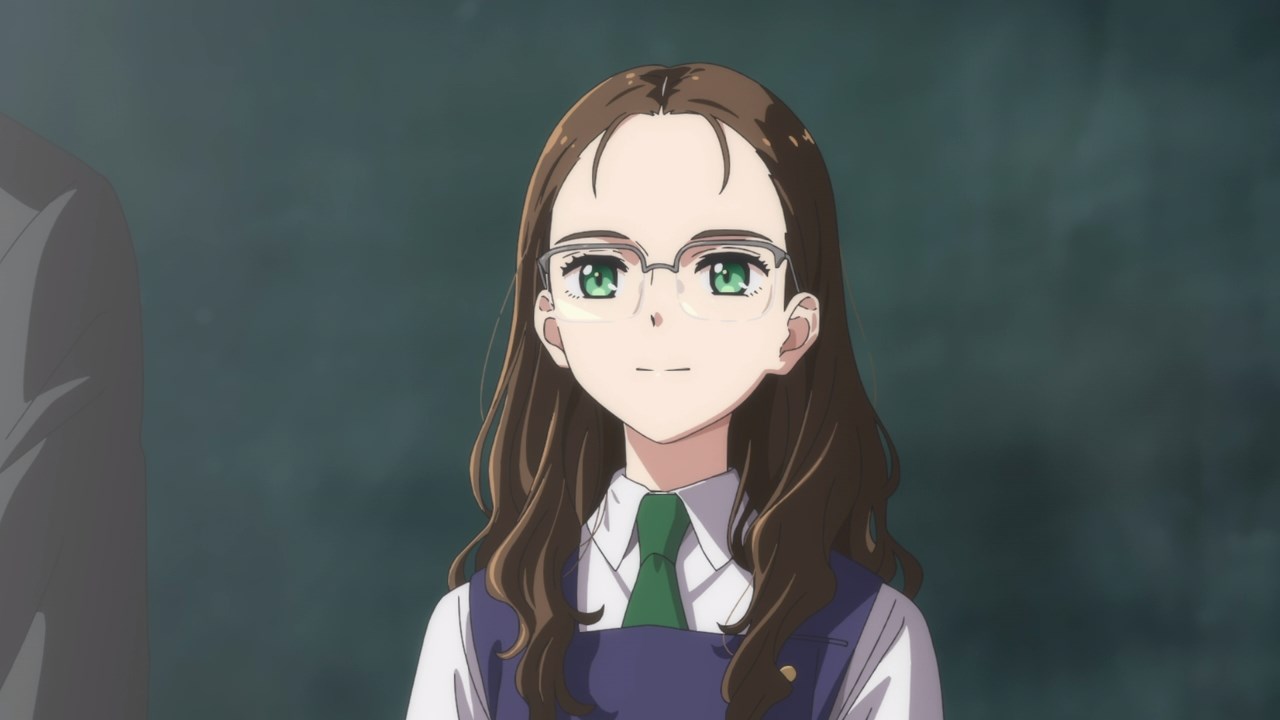 This is Koito Nagase where she became Ai Ohto’s first friend despite the fact that Ai-chan has heterochromia. Sadly, Koito didn’t last long… 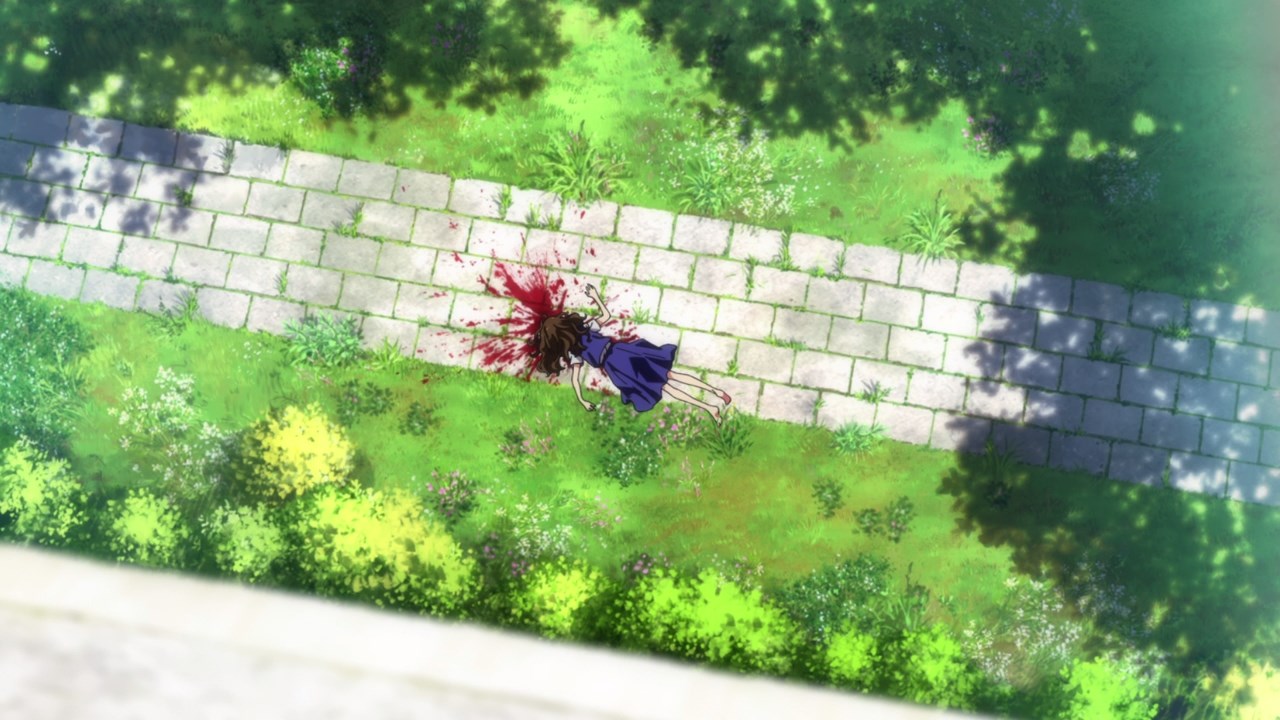 That’s because she committed suicide by jumping off the rooftop. Some say that she was pressured to antagonize Ai-chan because of her mismatched eyes, while others decided to bully her just because she’s different from the rest.

Regardless, Ai-chan is sad that she lost a dear friend. Come to think of it, I feel that this strange yet cruel world alludes to bullying where the See No Evil represents the mob that targets people who are different than them. While it’s starting to make sense, I still shocked to this acid trip of a first episode. 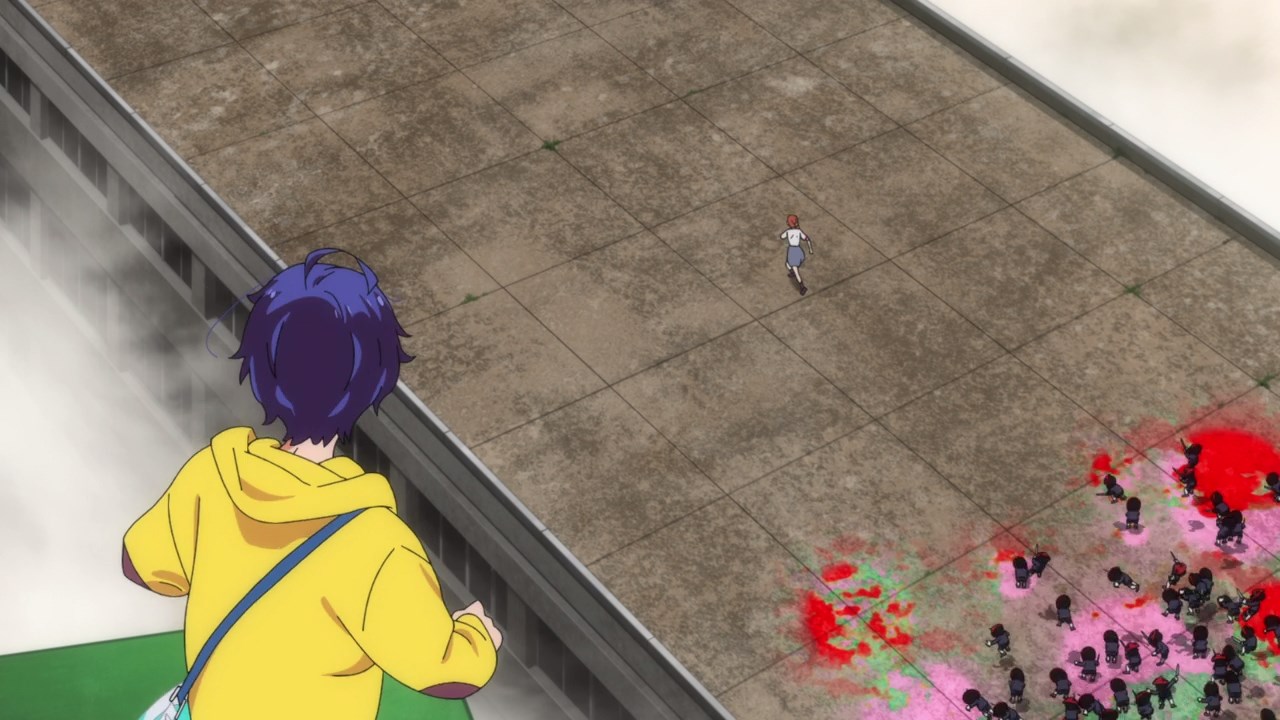 Anyways, we’re getting closer to the finale of Episode 1 as Kurumi Saijou is still being chased by the See No Evil. Of course, Ai Ohto doesn’t want to leave her to die. 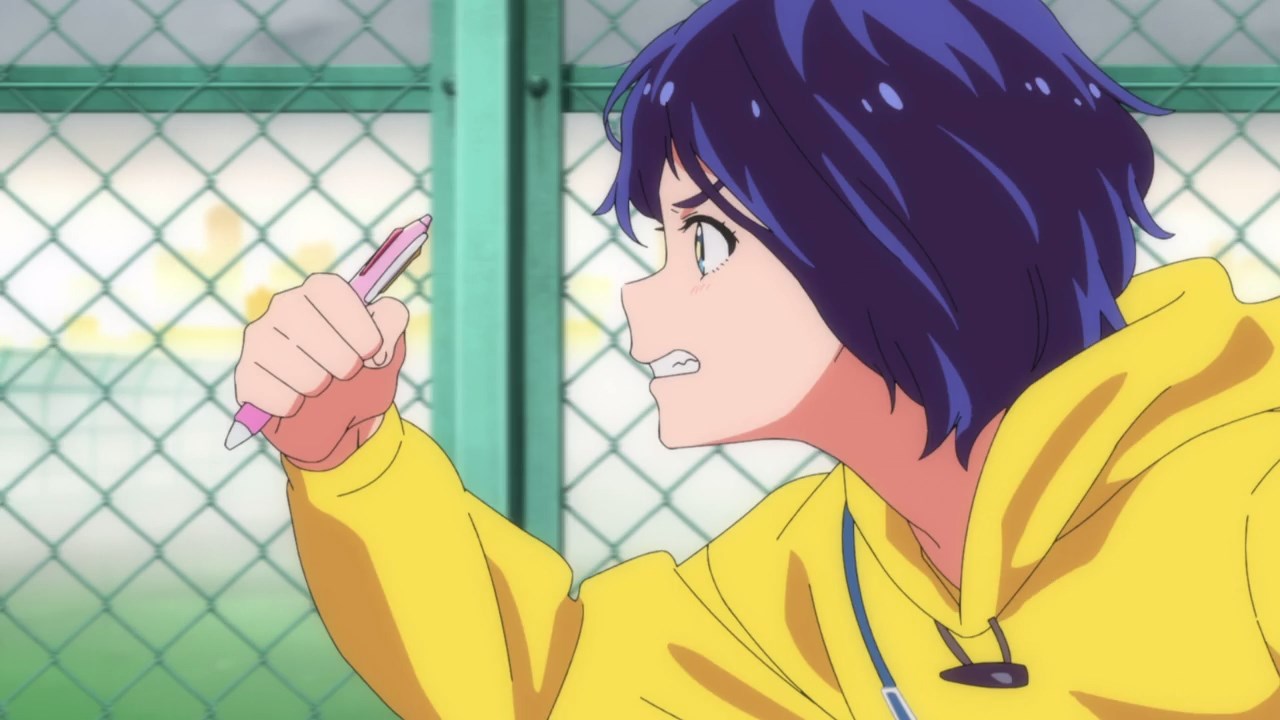 So, the only thing that Ai-chan can do is to jump to the other side and save Kurumi from those monsters. Jumping is one thing, but stopping the See No Evil is a very different matter. 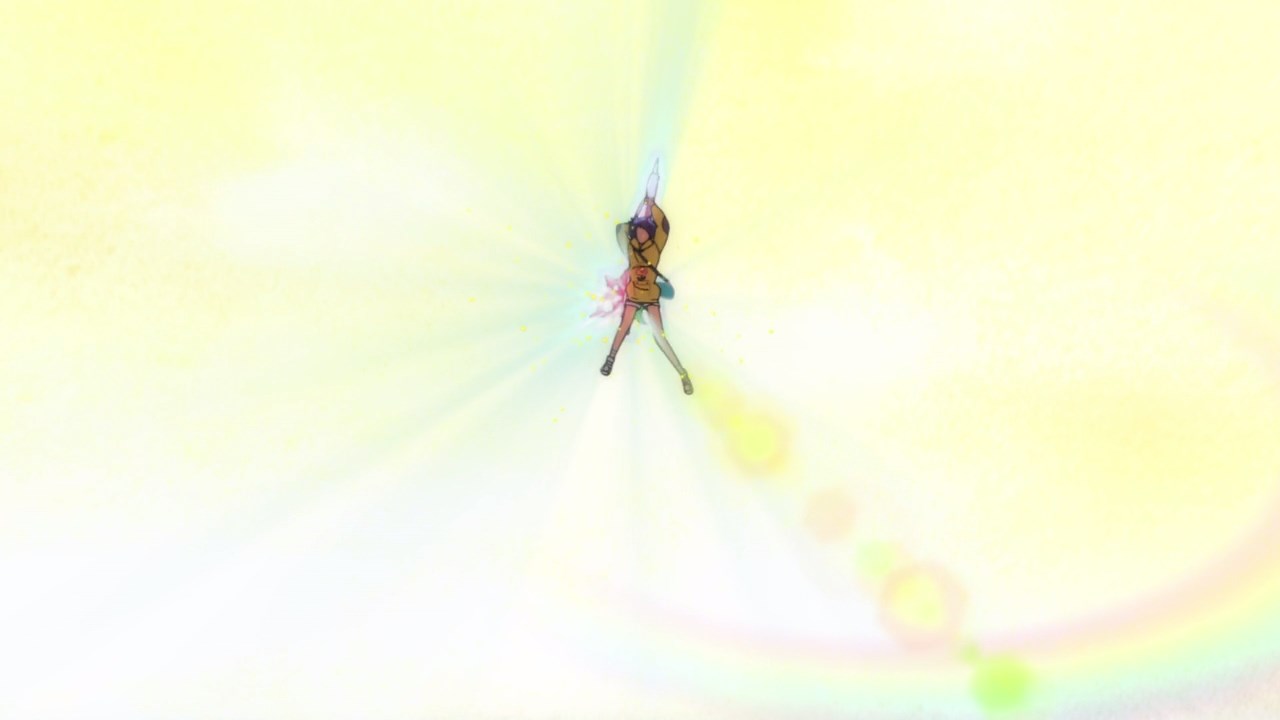 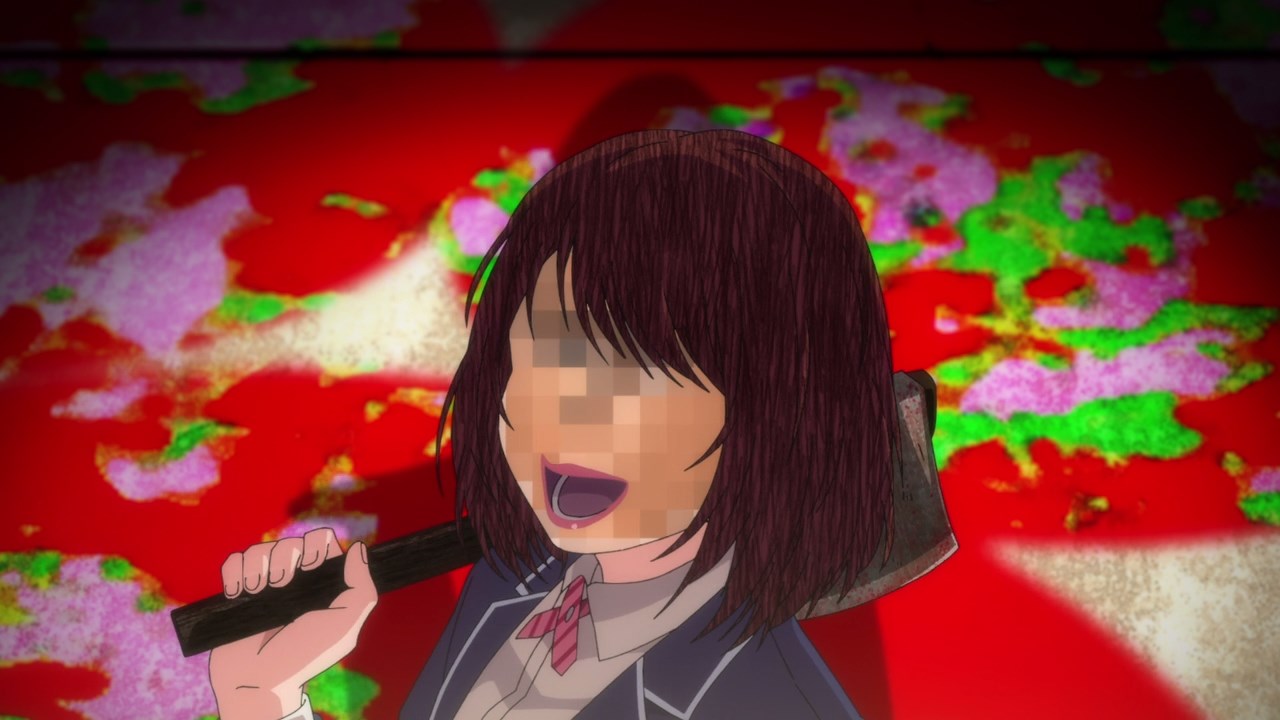 That’s until her pen transforms into a spear as Ai-chan is about to kill its leader. Even the girl with obscured eyes is caught off-guard with Ai’s stunt. 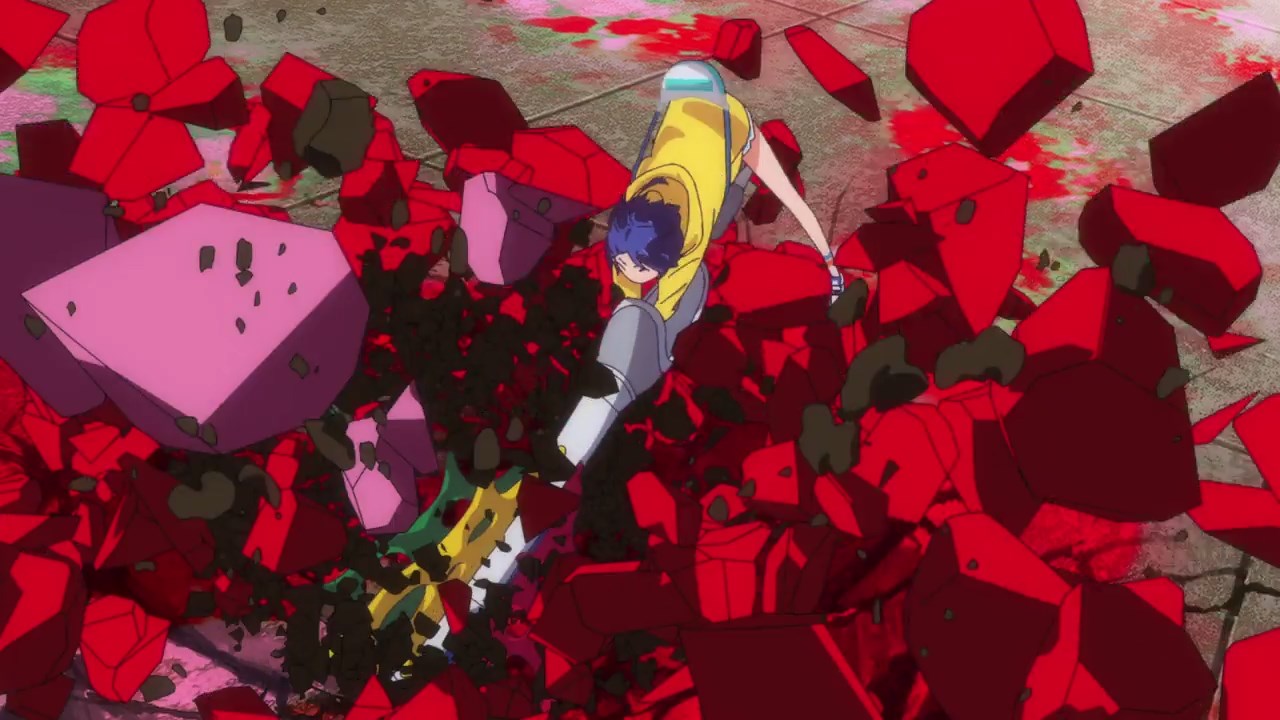 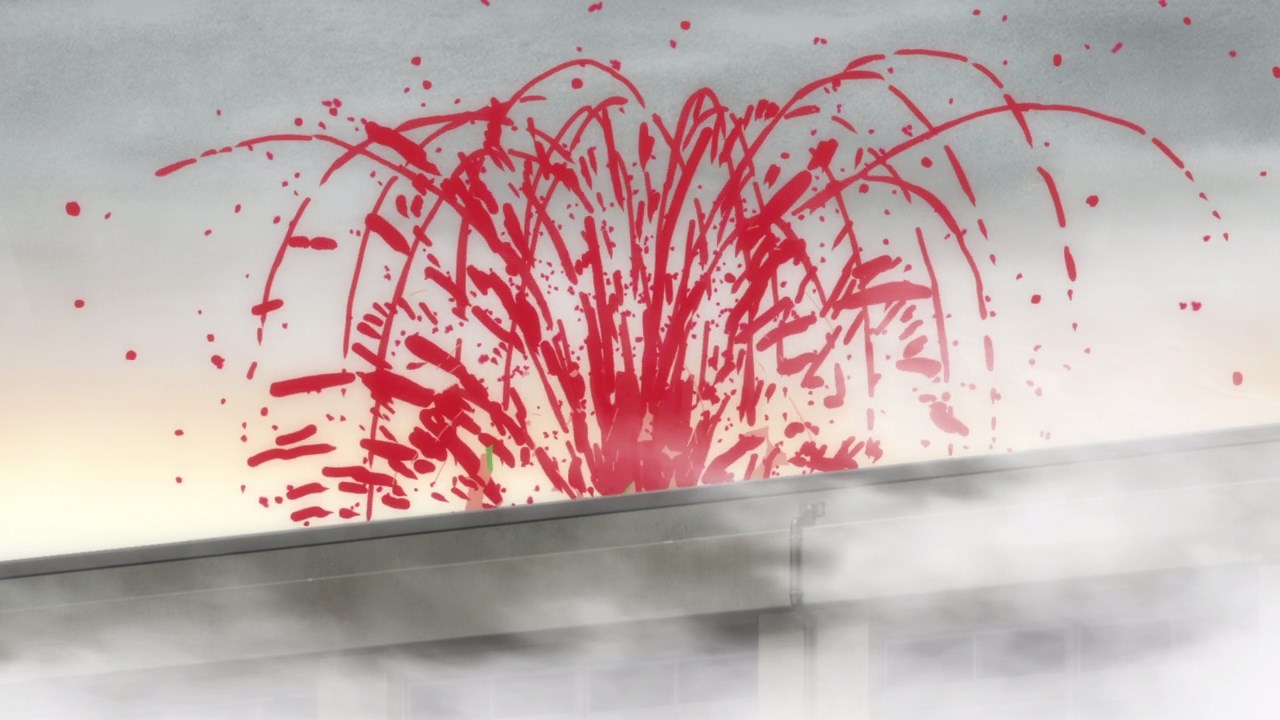 With that said, looks like Ai Ohto managed to kill the leader of See No Evil and thus she saved Kurumi Saijou, although I have to say that it was a spectacular explosion of neon-tinted blood. 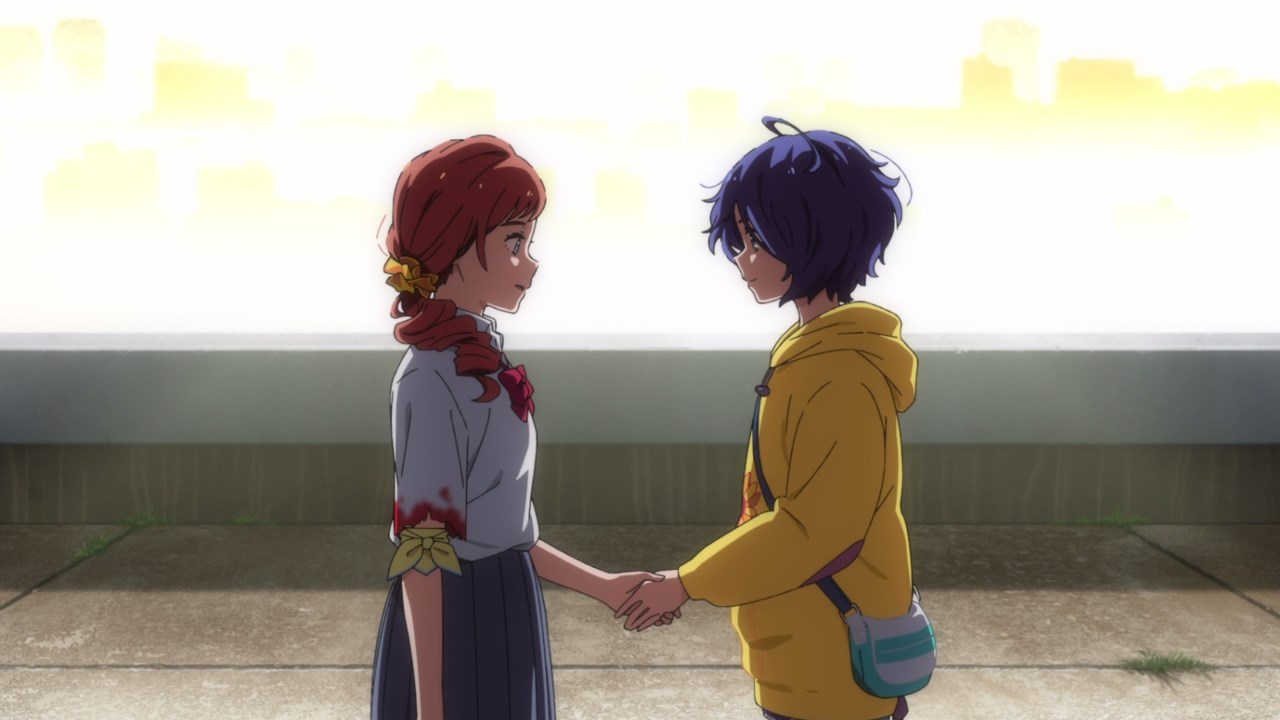 Unfortunately, Ai-chan will have to leave the strange world, thus she’ll have to say good-bye to Kurumi Saijou. I’m hoping that she’ll see Kurumi again, right? 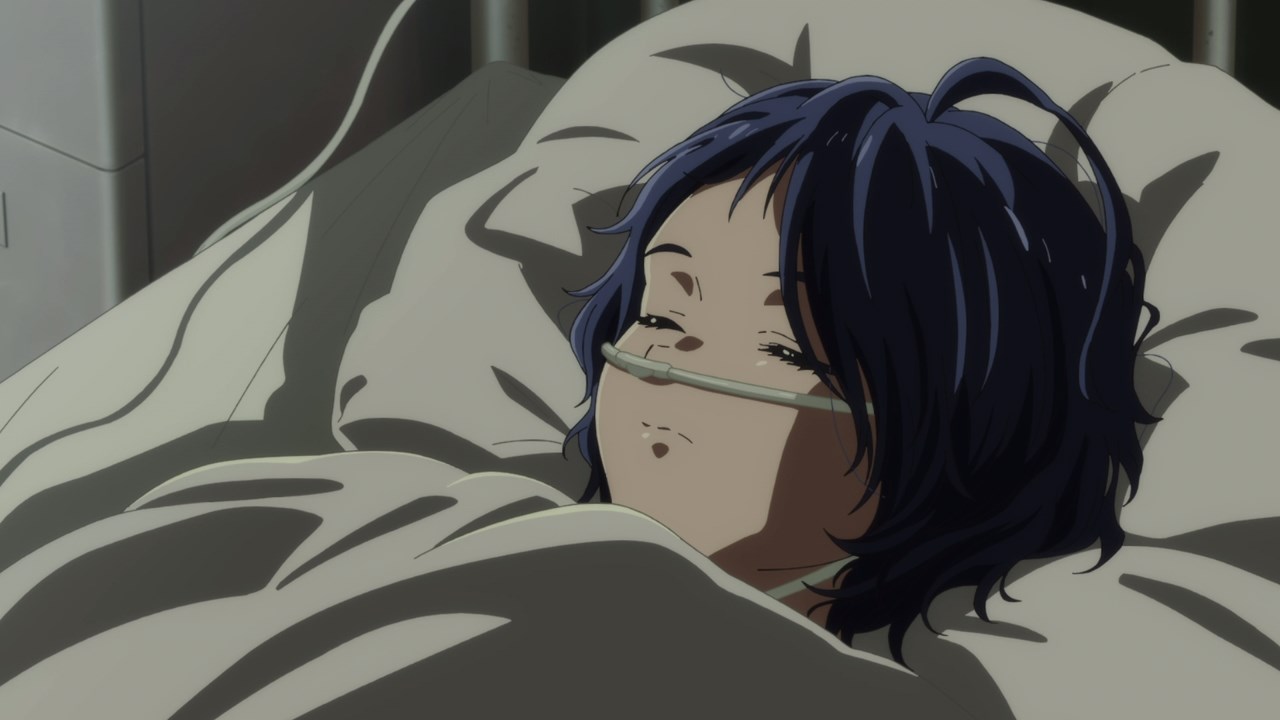 Then again, I have a feeling that it’s all just a dream as Ai Ohto is in a hospital due to her liver getting busted.

She’s not dead though but come to think of it, is everything that happened on this episode is actually real if Ai-chan got a stab wound? Who knows… 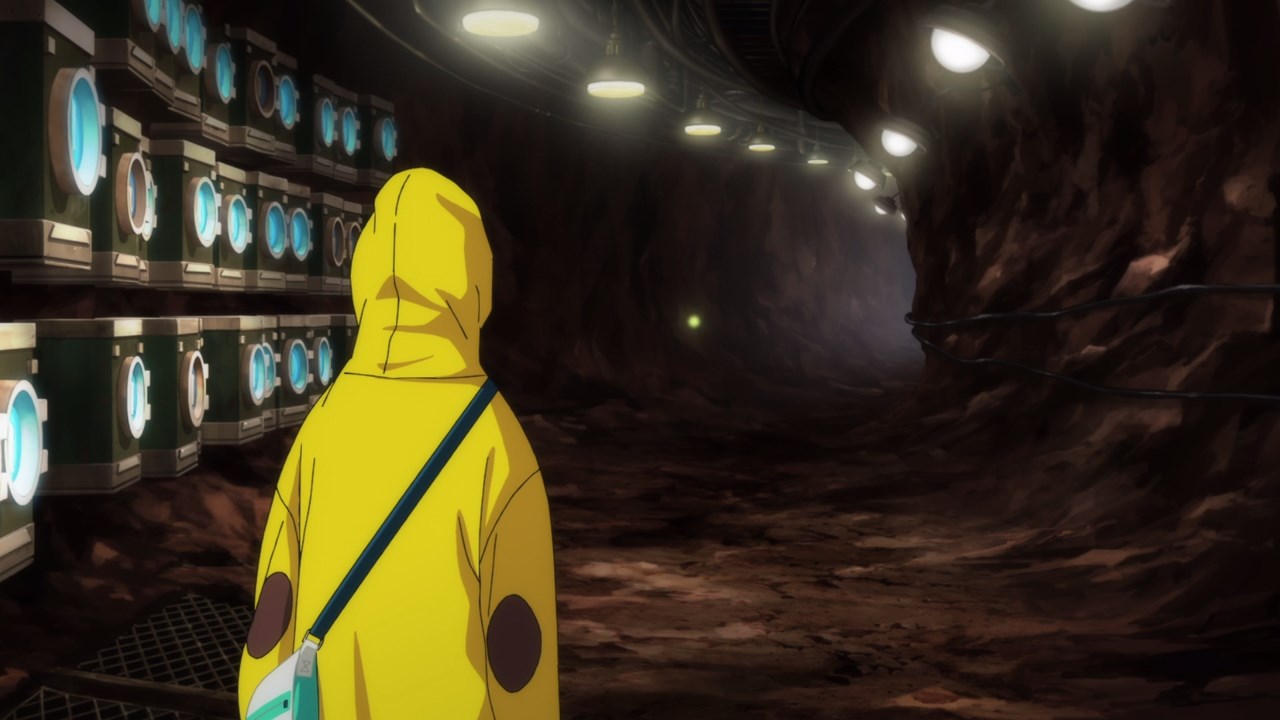 With that said, let’s end this first episode of Wonder Egg Priority as Ai Ohto returns to the strange world where she’s tasked on saving people who committed suicide in the real world.

Well, even though it’s somewhat grim given that there’s bullying, CloverWorks created something that’s out of this world. I can’t wait for the next episode ’cause I’m hooked!