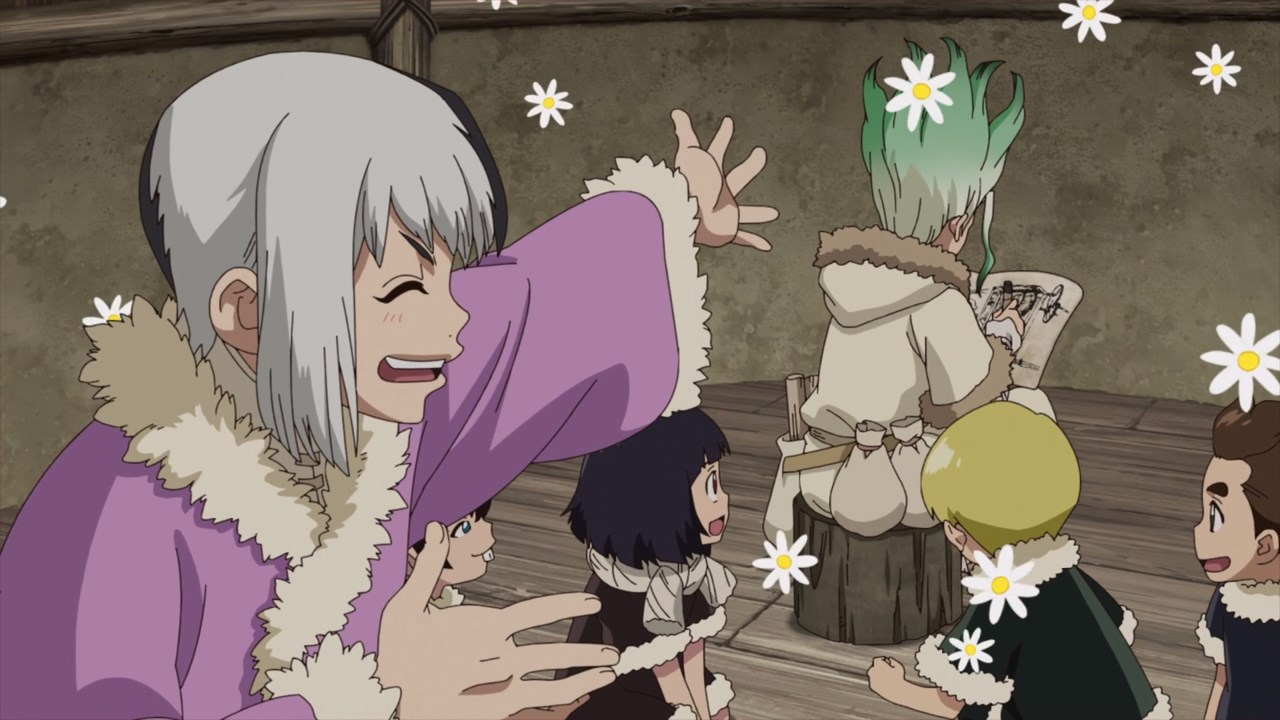 Here’s Gen Asagiri where the mentalist told the kids about the story of one genius who wants to bring back modern civilization in the stone world. That genius is none other than Senku. 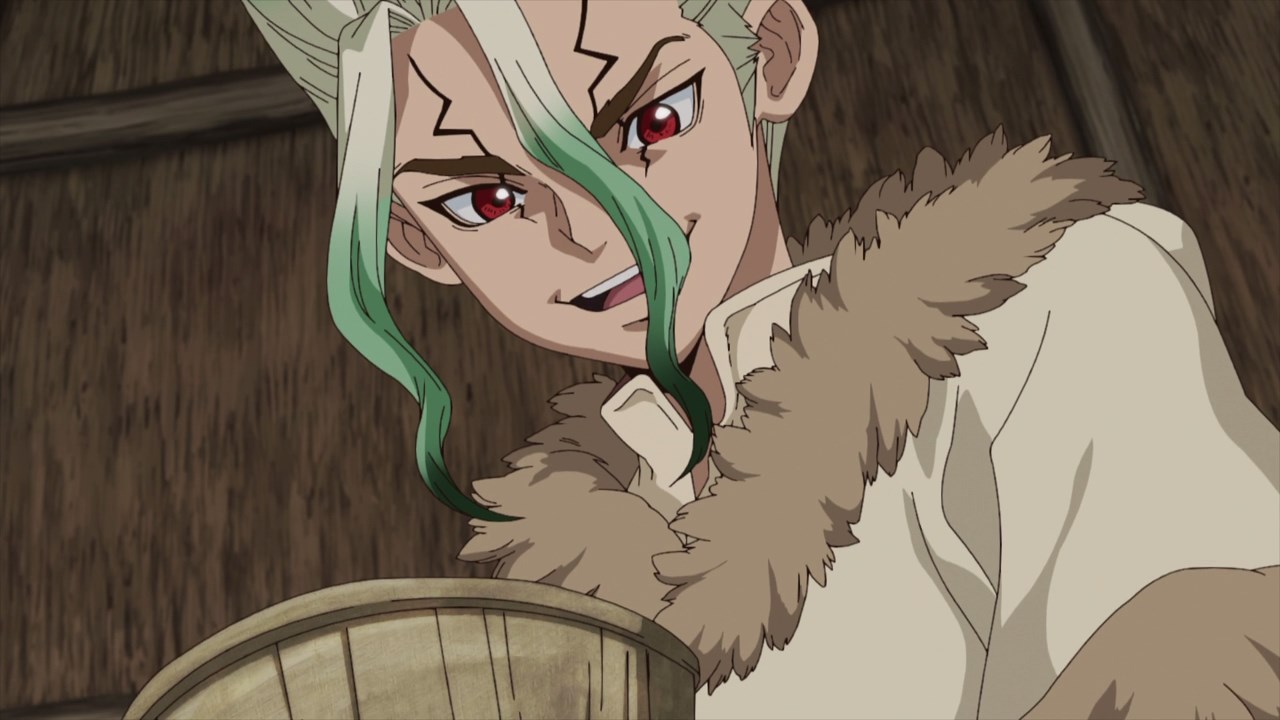 Speaking of Senku, the chief of Ishigami Village is making a new invention that would be convenient in the upcoming war against Tsukasa Shishio and his Empire of Might. 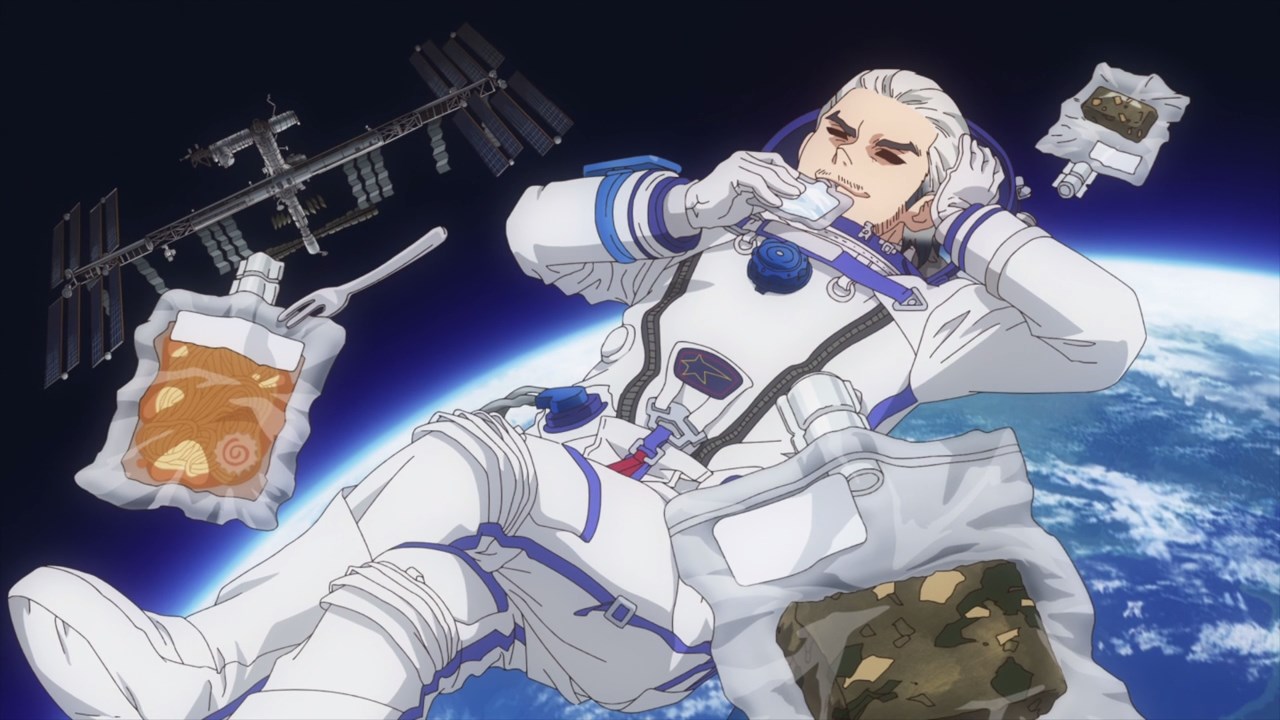 For you see, Senku is making space ramen. Y’know, the one where his father Byakuya brought it to the space station many years ago.

Of course, since the space station has already crashed, Senku will have to make ramen that can not only store for a long time, but also cook it in an instant. Wait, he’s making cup ramen basically! 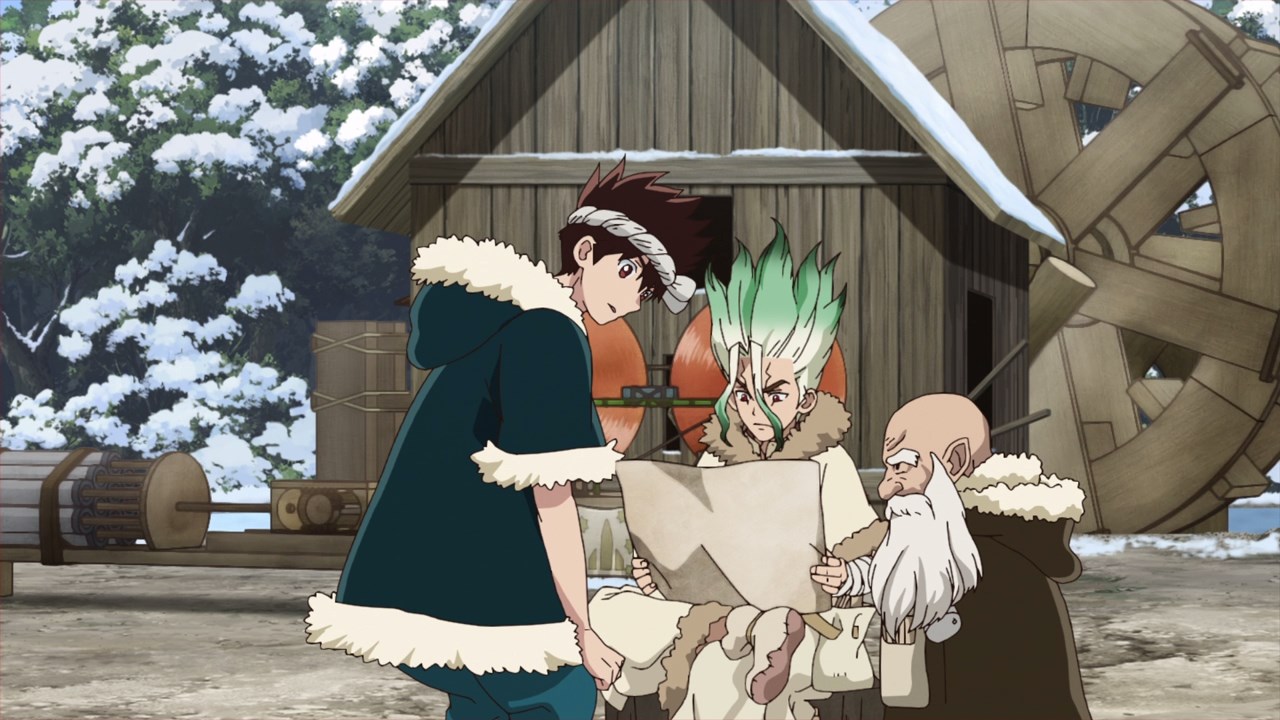 So first things first, they need to make a machine that can suck out the moisture from the food. Good thing Chrome and Kaseki got the gist from Senku’s idea since they’re good inventors. 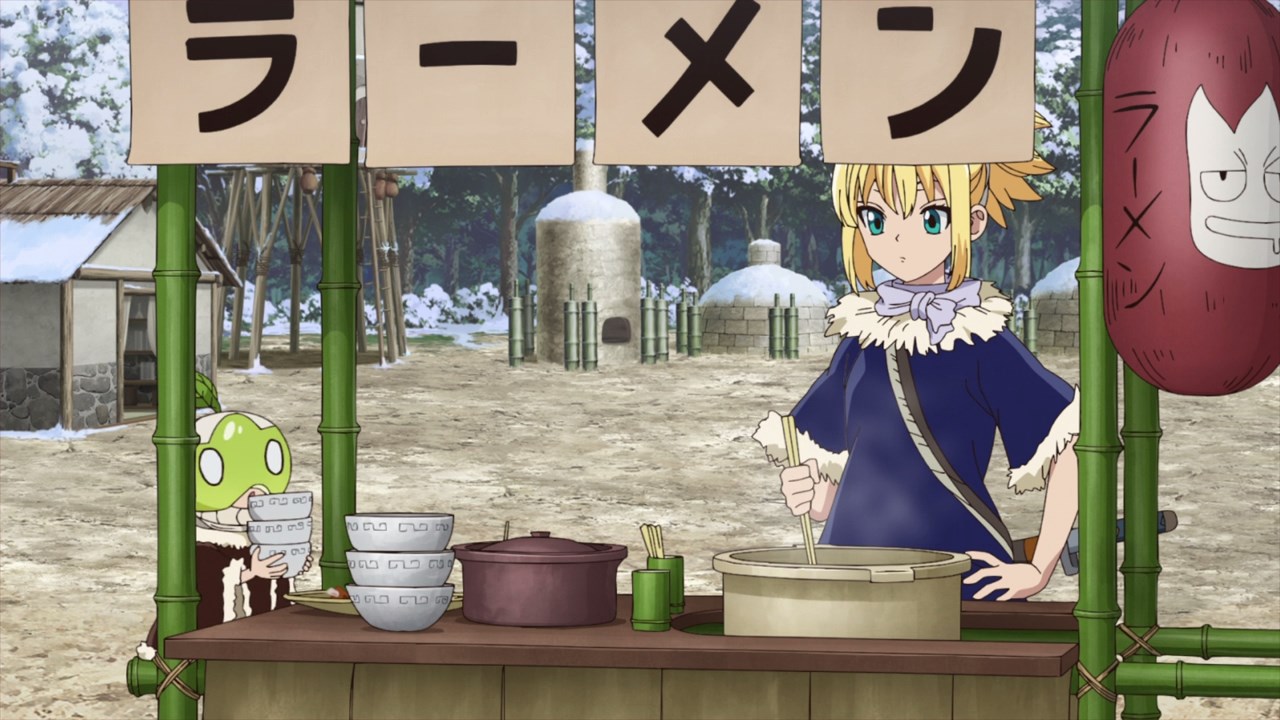 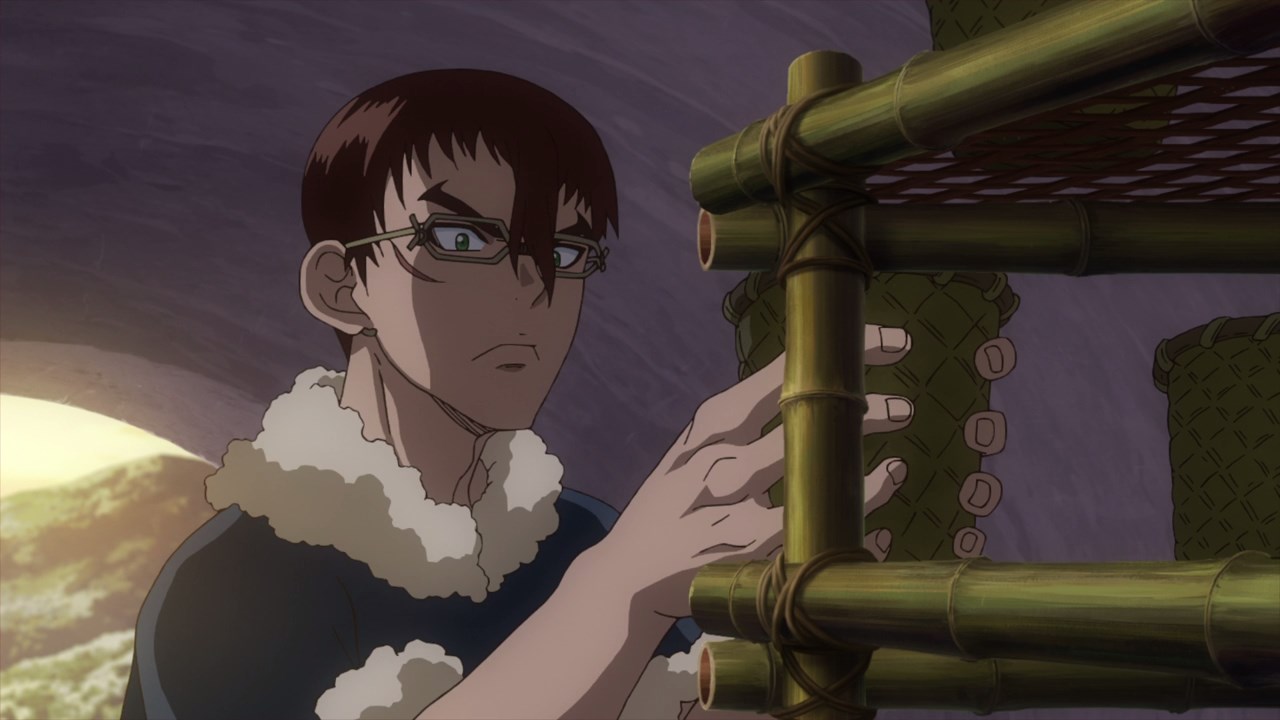 Now then, it’s time to cook some ramen and then store it to a cold place like an igloo to freeze the food. Why they need to freeze ramen after it’s done cooking? You’ll find out later. 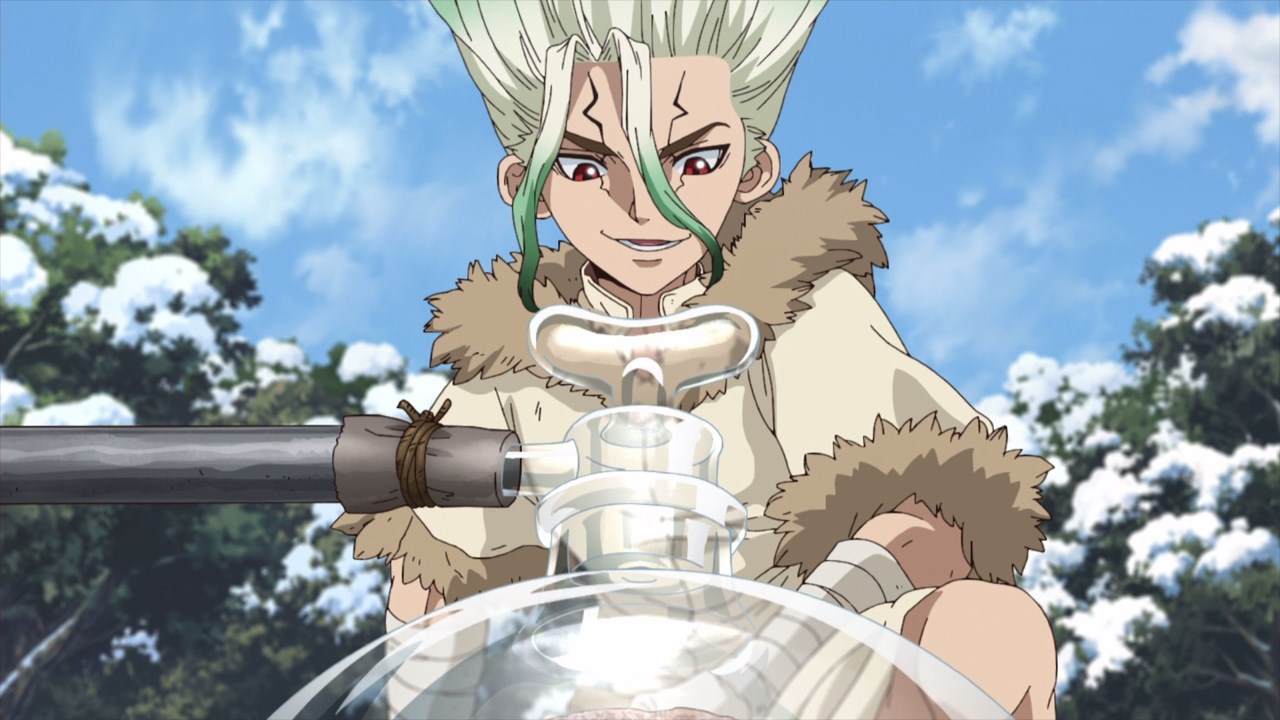 That’s where Chrome and Kaseki’s new invention comes into play as they created a freeze-drying machine which would remove moisture from the ramen, therefore it’ll prolong the shelf life since there’s no moisture that would spoil the food. 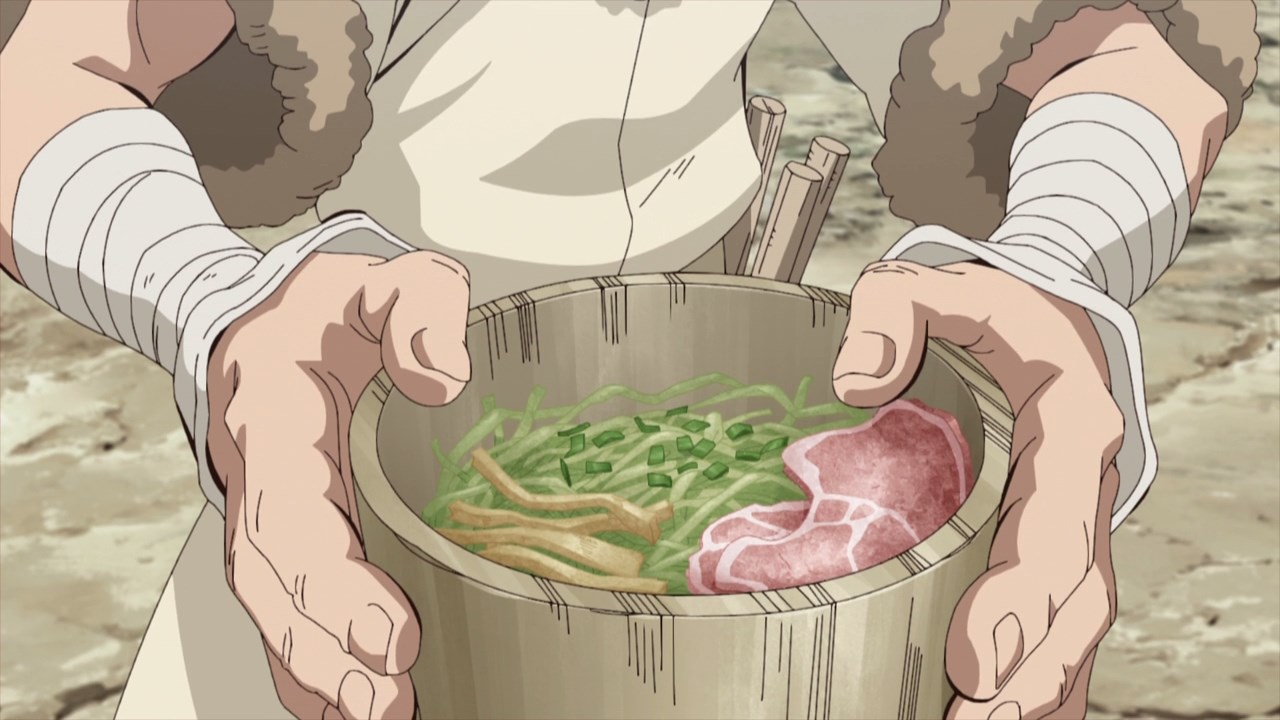 But anyways, Senku and his team created the first cup ramen in the stone world. Of course, there’s no seal to cover the contents and it looks unappetizing for most of the villagers. 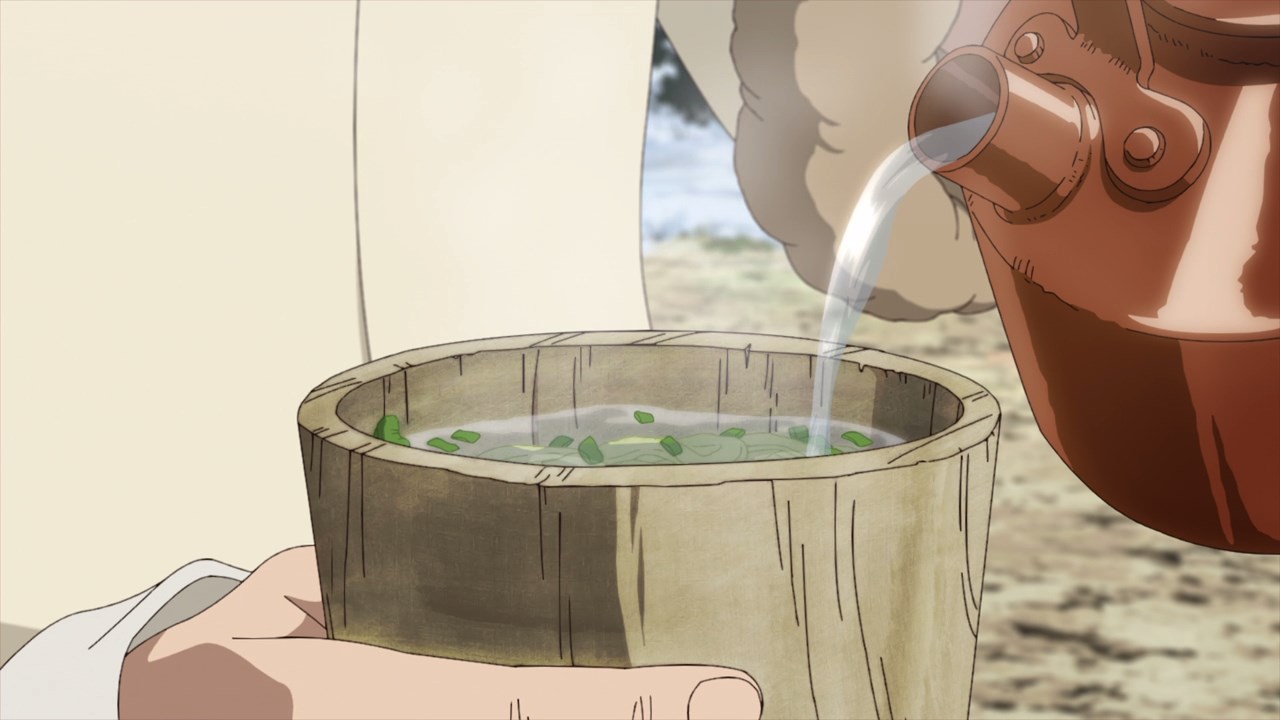 That’s where Senku added hot water to rehydrate the ramen. That’s great and all, but how’s the taste though? 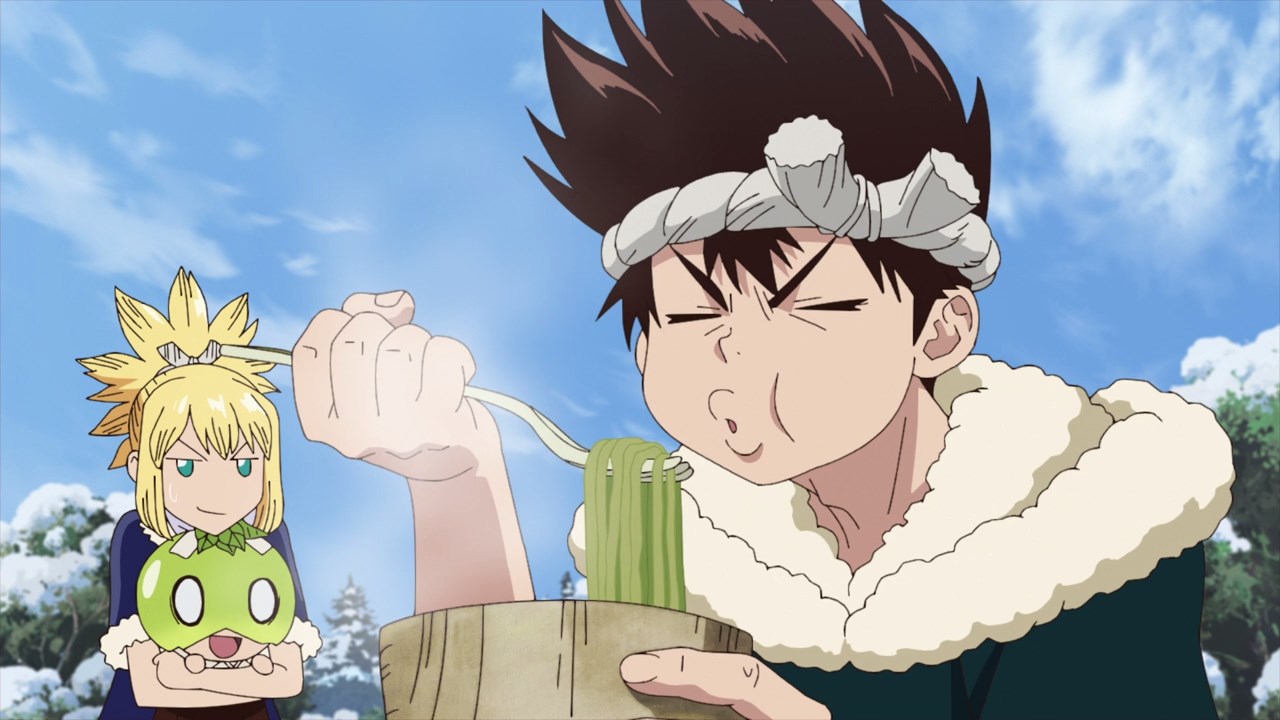 Well, it’s time for Chrome to test the flavor of the cup ramen. After all, he knows the taste of foxtail ramen. 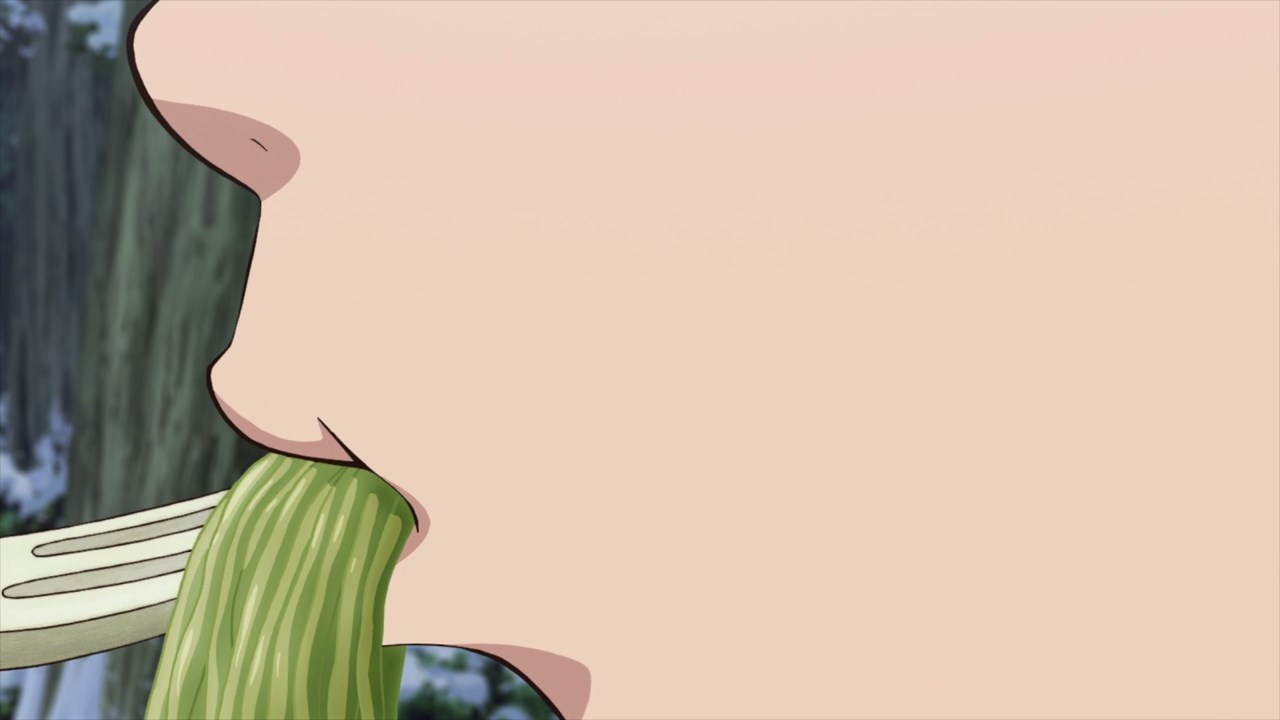 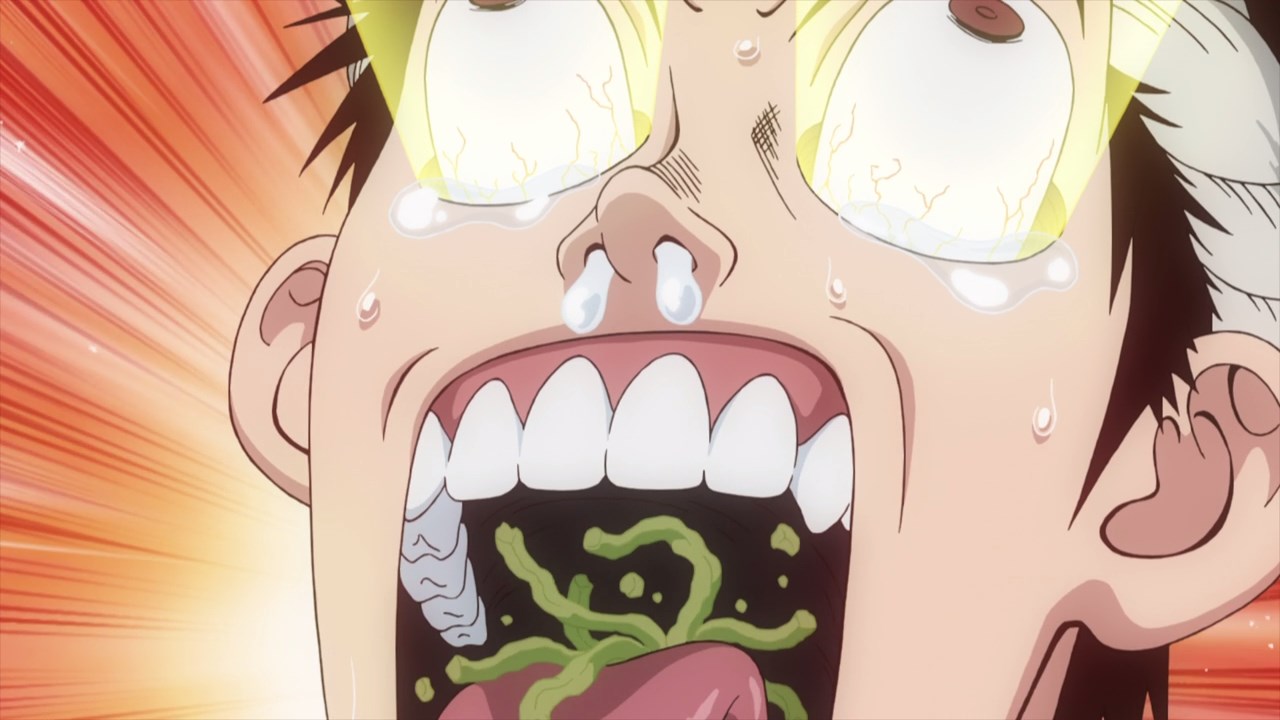 But anyways, looks like Chrome is really impressed that the cup ramen tasted good as the real thing.

Looks like their food supply is solved, but the only thing I’m worried about is how to get some hot water in the woods without getting caught. 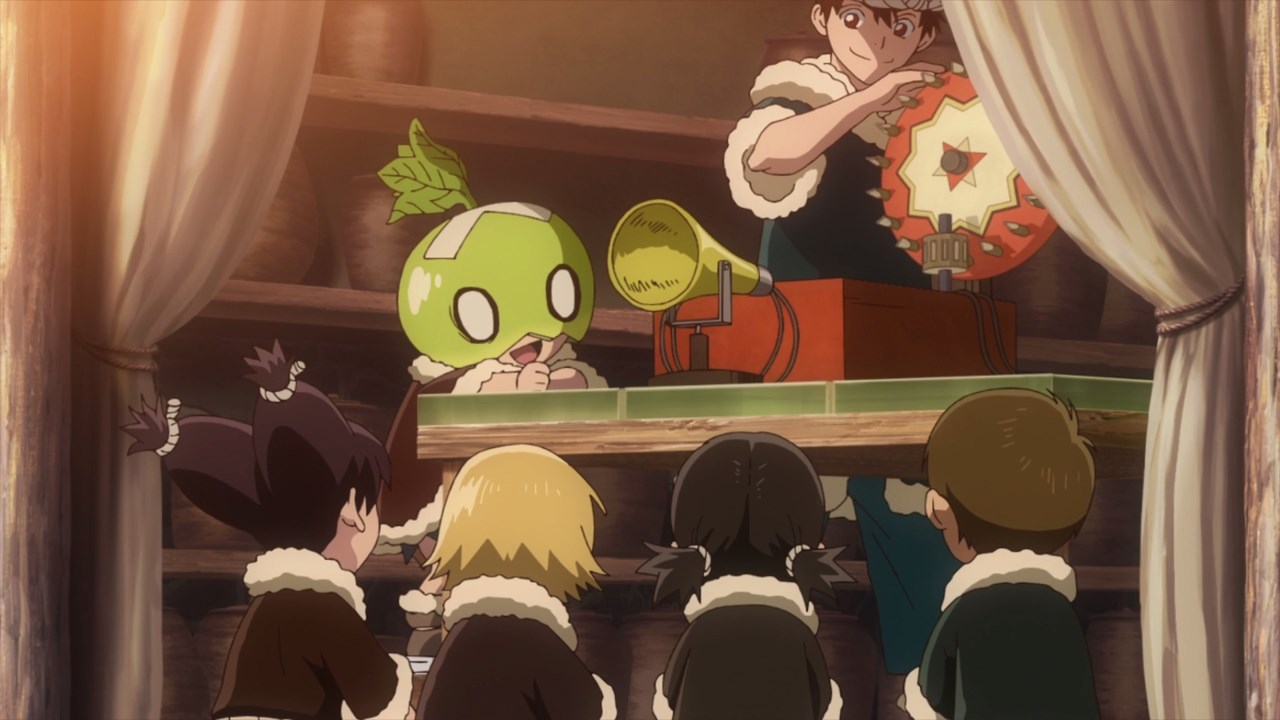 Meanwhile, it appears that the entire village is captivated by Lilian Weinberg’s song, although the problem is that the audio quality is not that great since it’s being played on a phonograph. 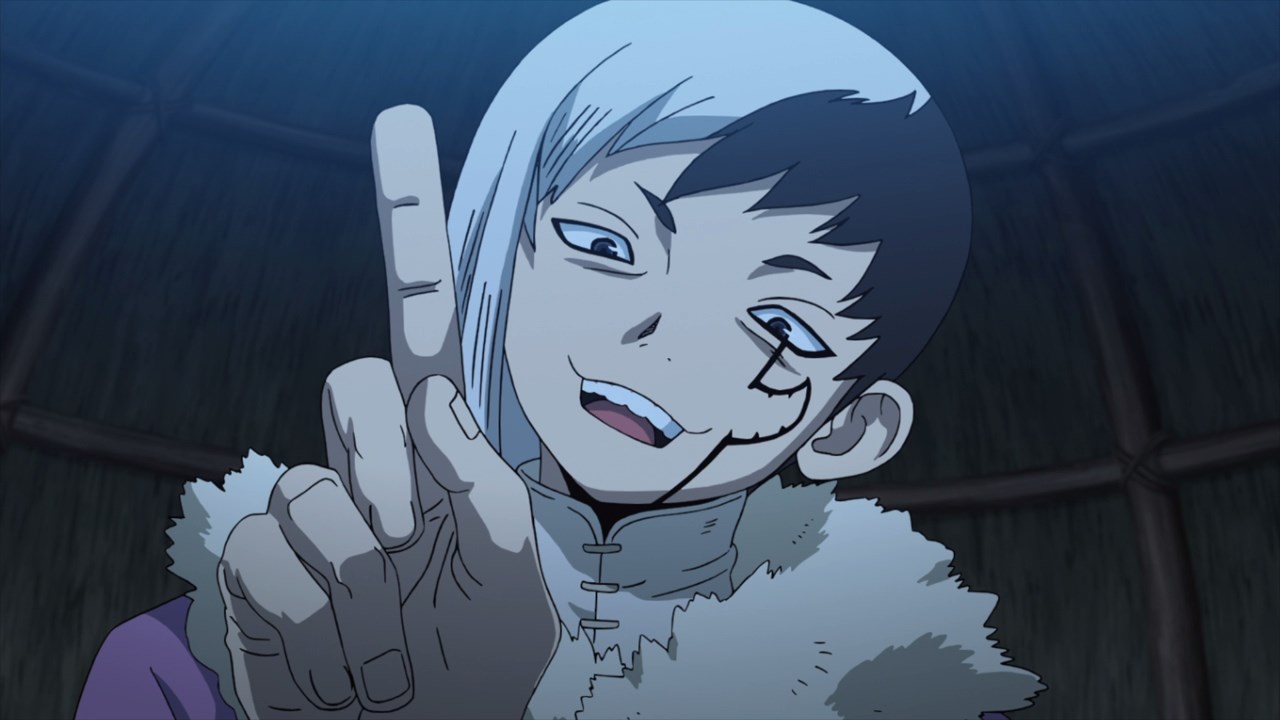 But that’s where Gen Asagiri told his idea to Senku where he wants to use Lilian Weinberg’s song to convince Tsukasa Shishio’s army to lay down their arms.

That’s a novel idea but I doubt that Tsukasa’s Empire of Might have any memories about the diva, let alone listening to one of Lilian’s songs. 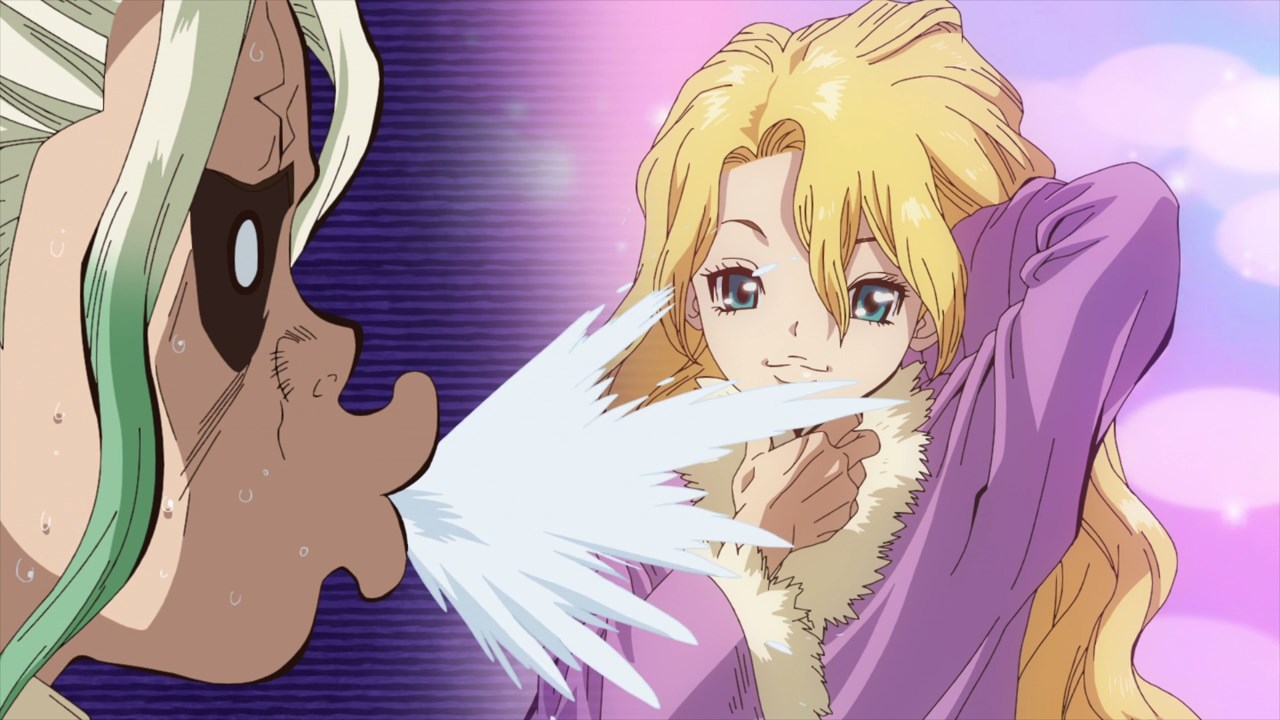 Oh yeah, he goes as far as changing his voice to that of Lilian Weinberg, which is kinda creepy since the diva is already dead many years ago.

Also, not to mention that Gen might strain his vocal chords which would be noticed by some people who might remember the diva. 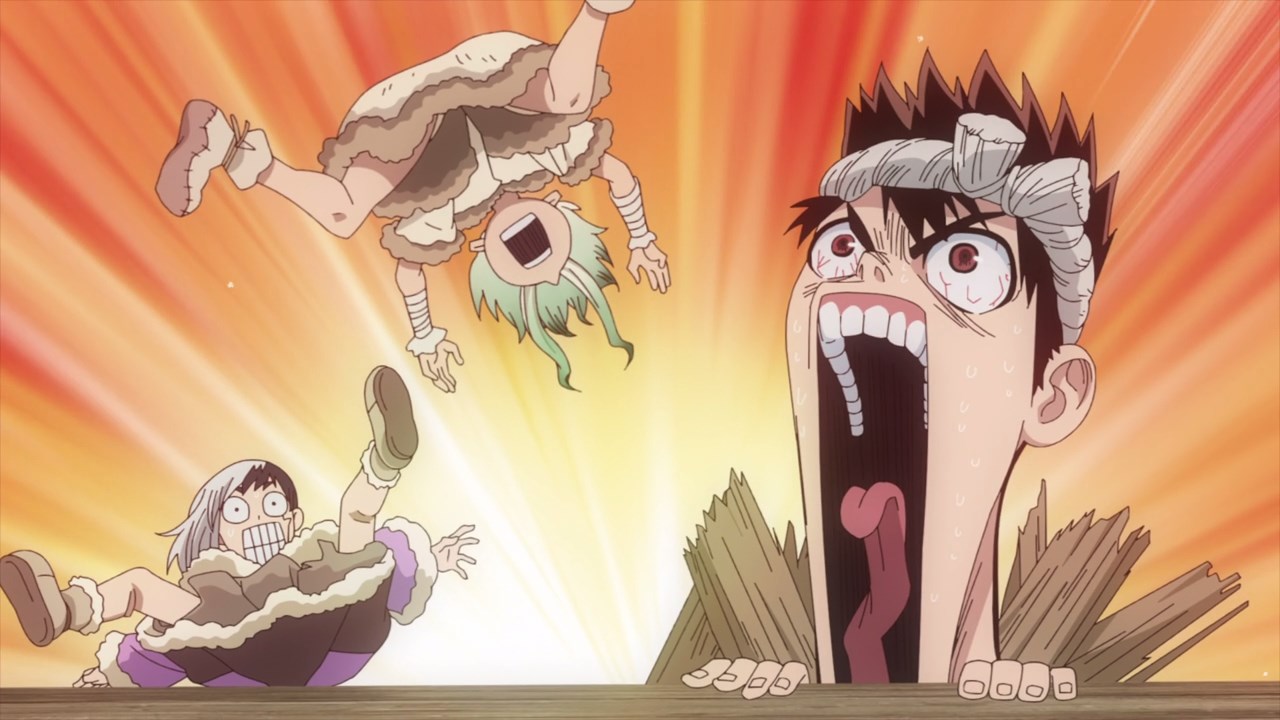 On the other hand, Chrome wants to join the conversation as he’s curious on how Gen Asagiri’s plan will play out. I mean, he doesn’t want to be left out of the loop. 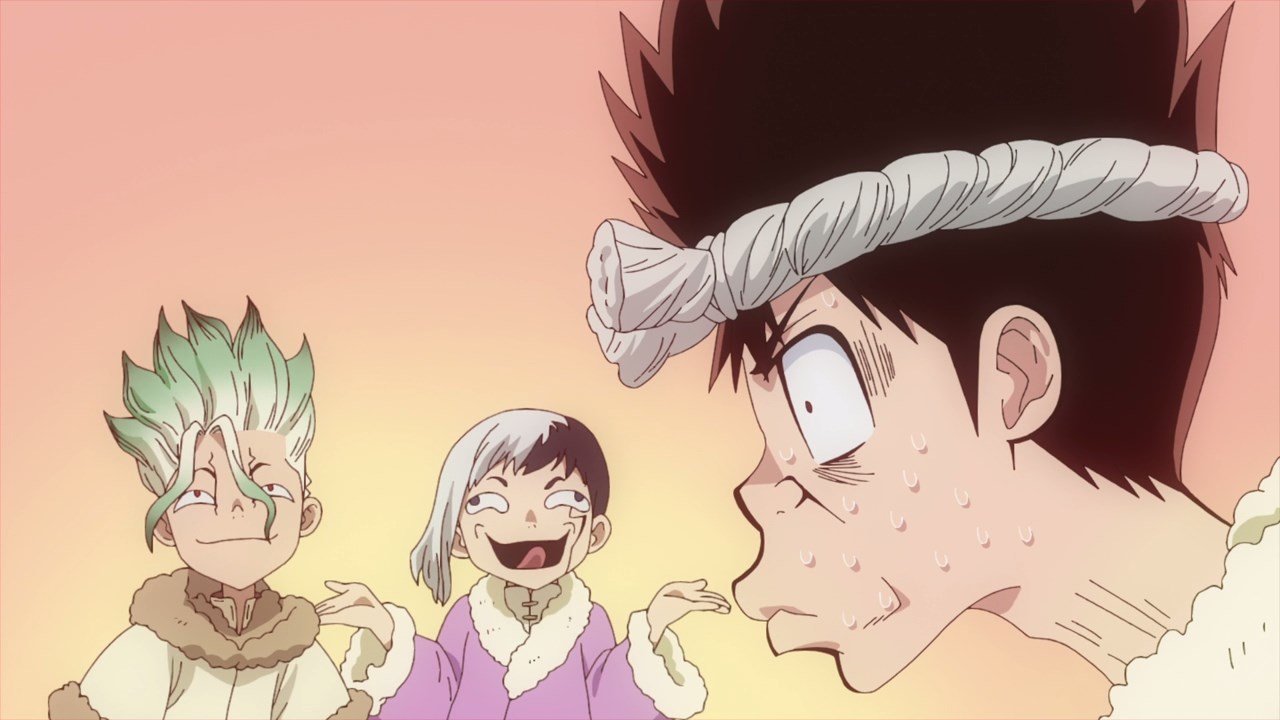 Still, even though that using Lilian Weinberg’s voice is scummy that there’s no way it would work, what’s important for Senku and Gen is to capture Tsukasa to end the war. Heck, they might get sent to hell for using a dead woman’s voice. 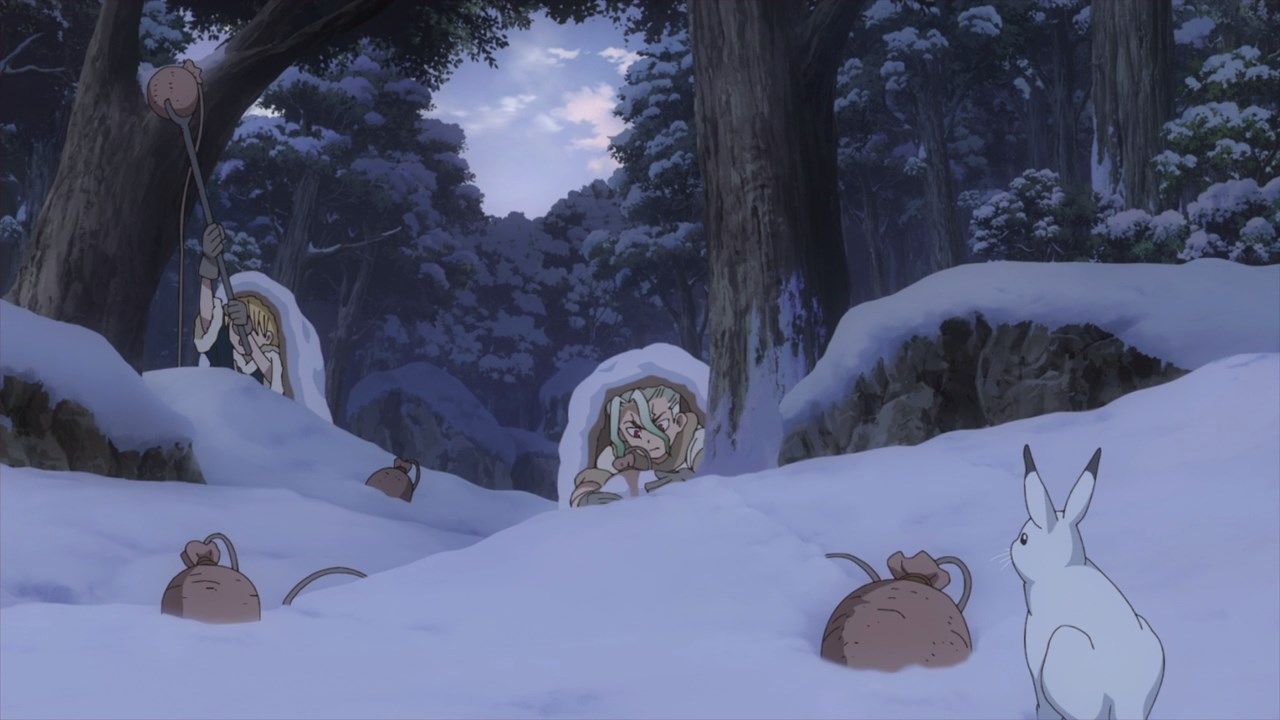 Well then, let’s end this episode where the Kingdom of Science will perform a pre-emptive strike towards the Empire of Might, using sonic bombs to grab attention to one of Tsukasa’s loyal scouts. You know who she is… 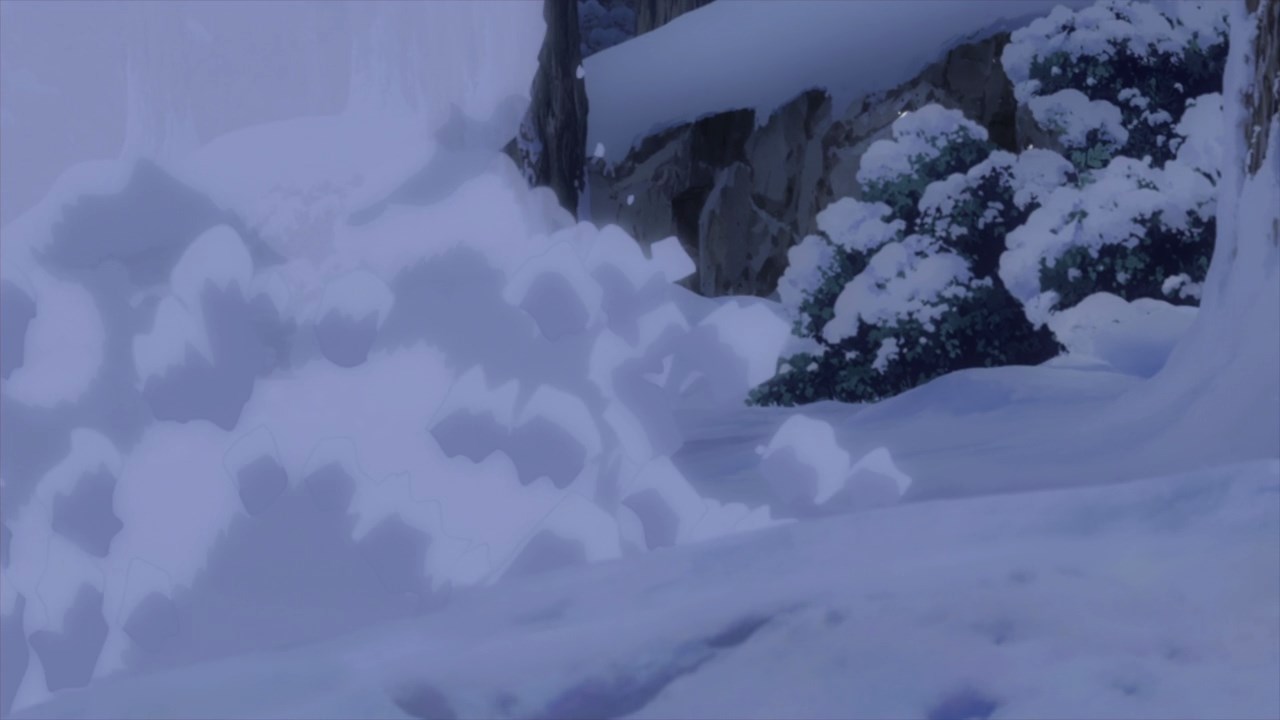 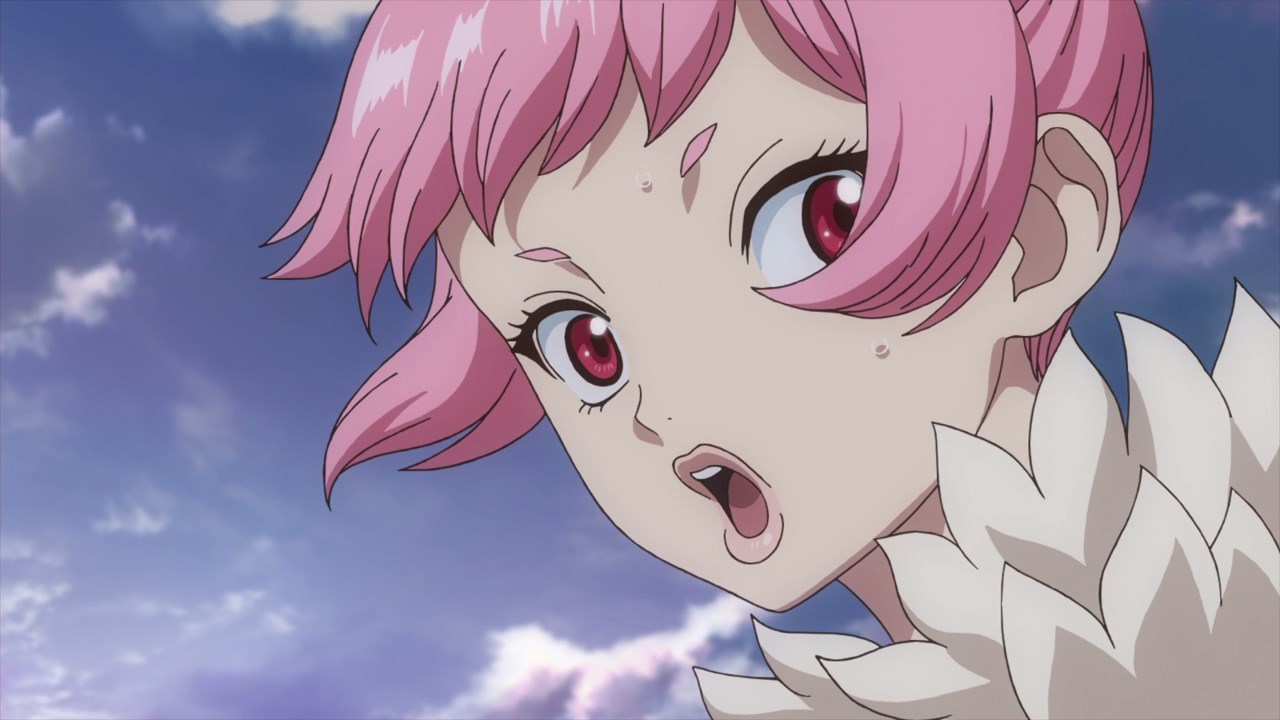 That’s right, it’s Homura where she took the bait from Senku’s sonic bombs. Thus, the Stone Wars started now with a whimper, but a loud bang! 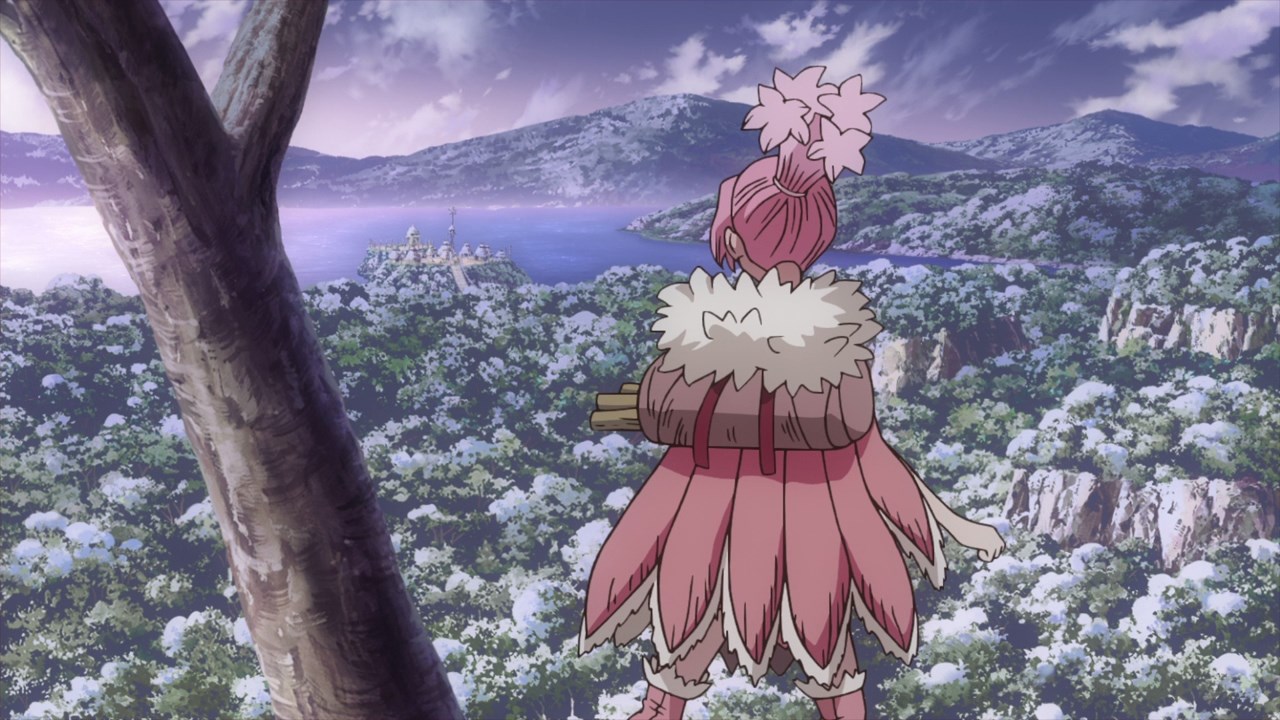 Of course, Gen Asagiri, Chrome, and Magma will have to carry the phone near the Empire of Might undetected, while Homura investigates the loud explosion that happened near the forest. Yeah, the Kingdom of Science will have to carry out the first step of their battle plan quickly and quietly.

Anyways, I’m glad that Dr. Stone has returned for Season 2 and I have to say that this will be a climatic battle between two sides that will determine the future of this stone world. Now then, I can’t wait for Tsukasa Shishio’s response on the next episode.