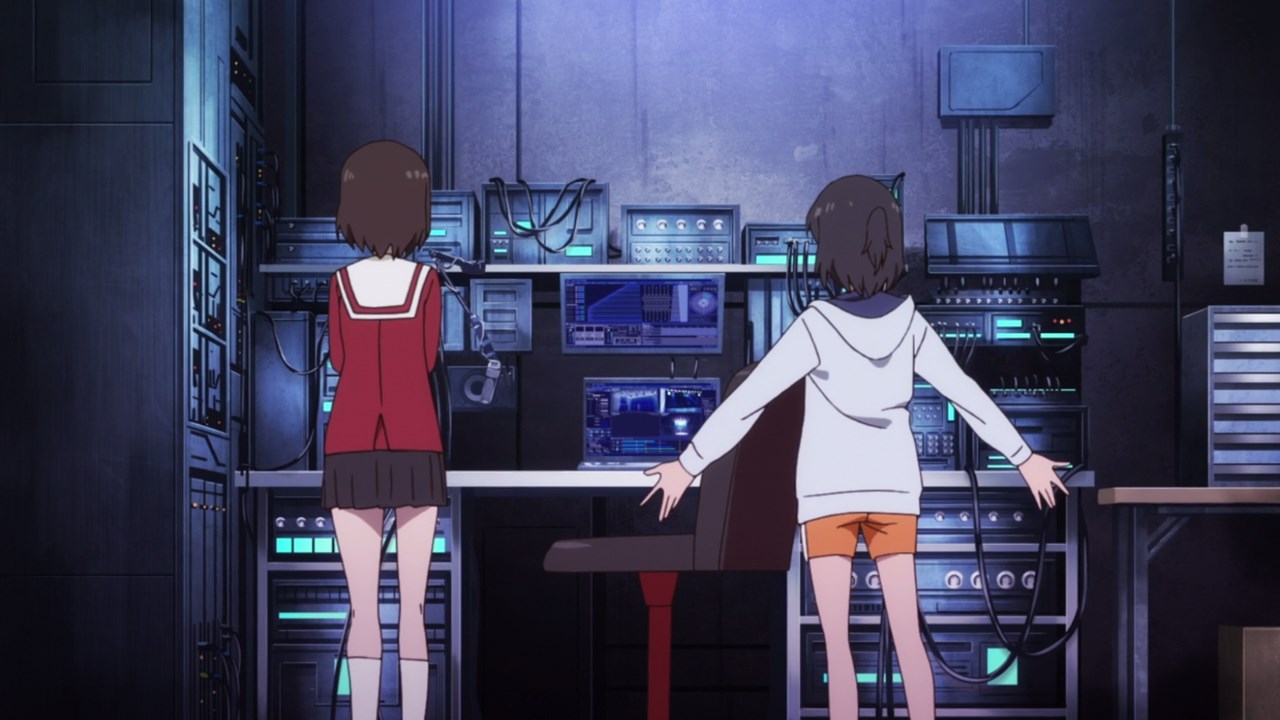 It’s time for Seria Morino’s first day at Alice in Theater where Airi Kagami shows her the Theatrical Material System or TMS for short. Anyways, this system is responsible for generating the stage background such as the props and the lighting, but the TMS suffered problems as it’s prone to shutdown if there’s not enough electricity. 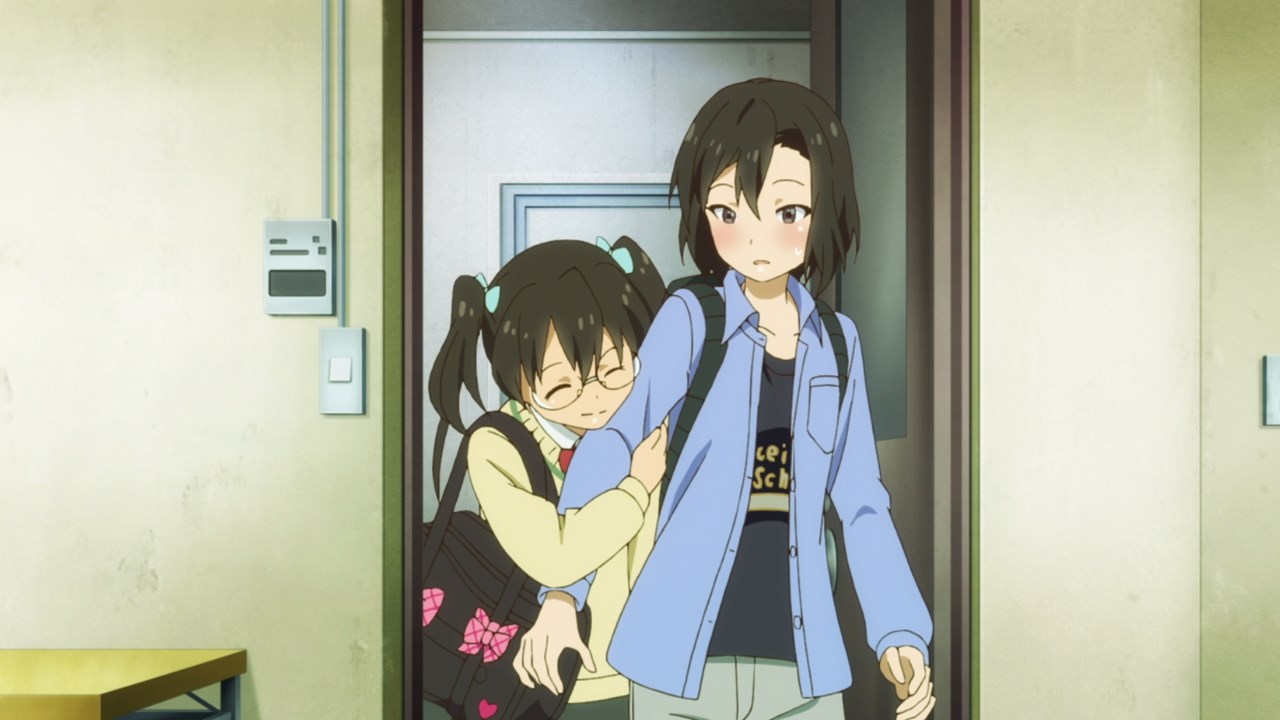 Now then, it’s time to meet the other members of Alice in Theater where we start things off with Aimi Fujita and Akira Asagi. While Akira is the coolest girl in the bunch, Aimi is the self-proclaimed idol. 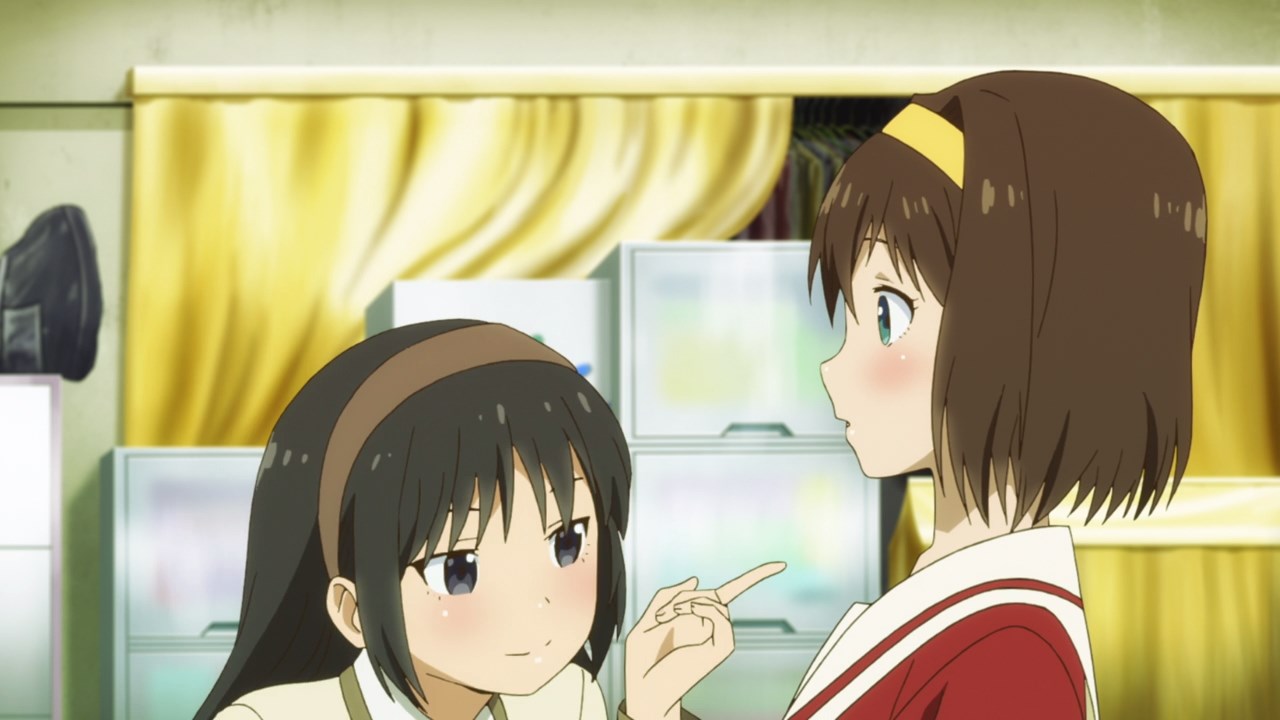 Also, there’s Mayuri Nakamura who loves to hang out with girls like Seria and take pictures with them. Okay, I’m hoping that she’s not overtly annoy people by taking selfies out of the blue. 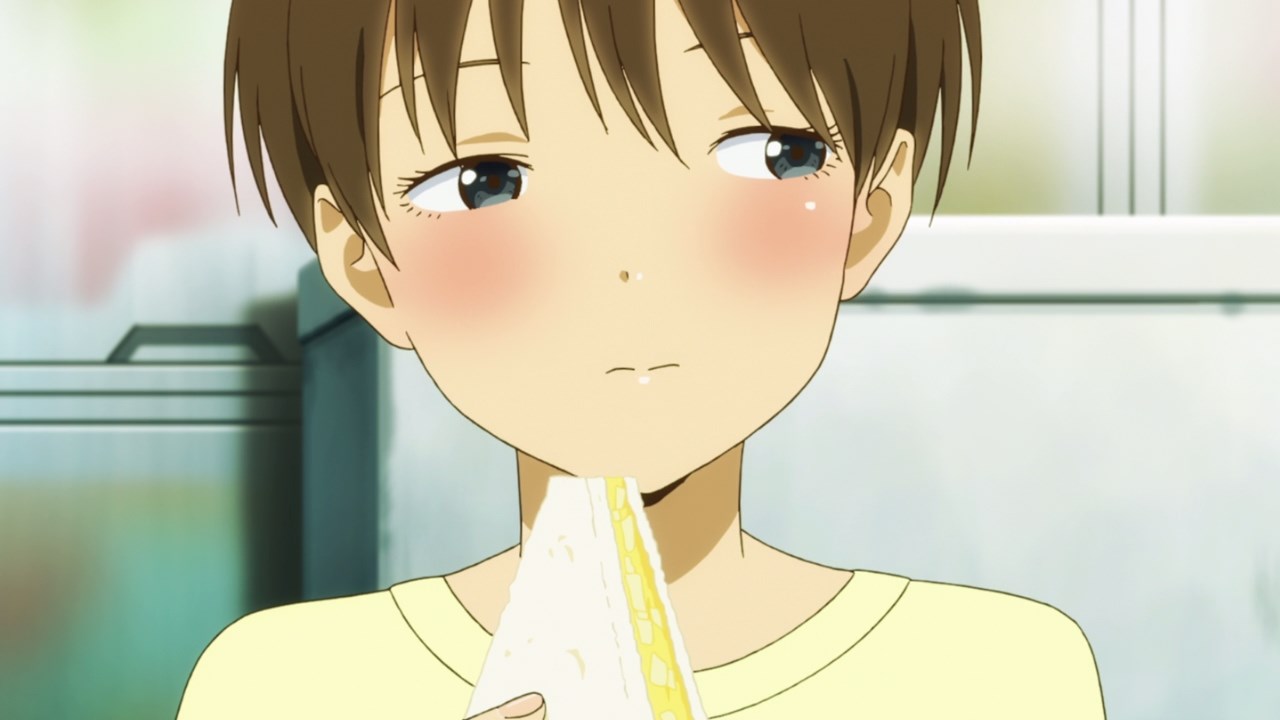 And finally, here’s Kazuharu Yamamoto who doesn’t have a presence inside the theater. Basically, no one noticed Kazuharu until someone pointed out that she’s there. 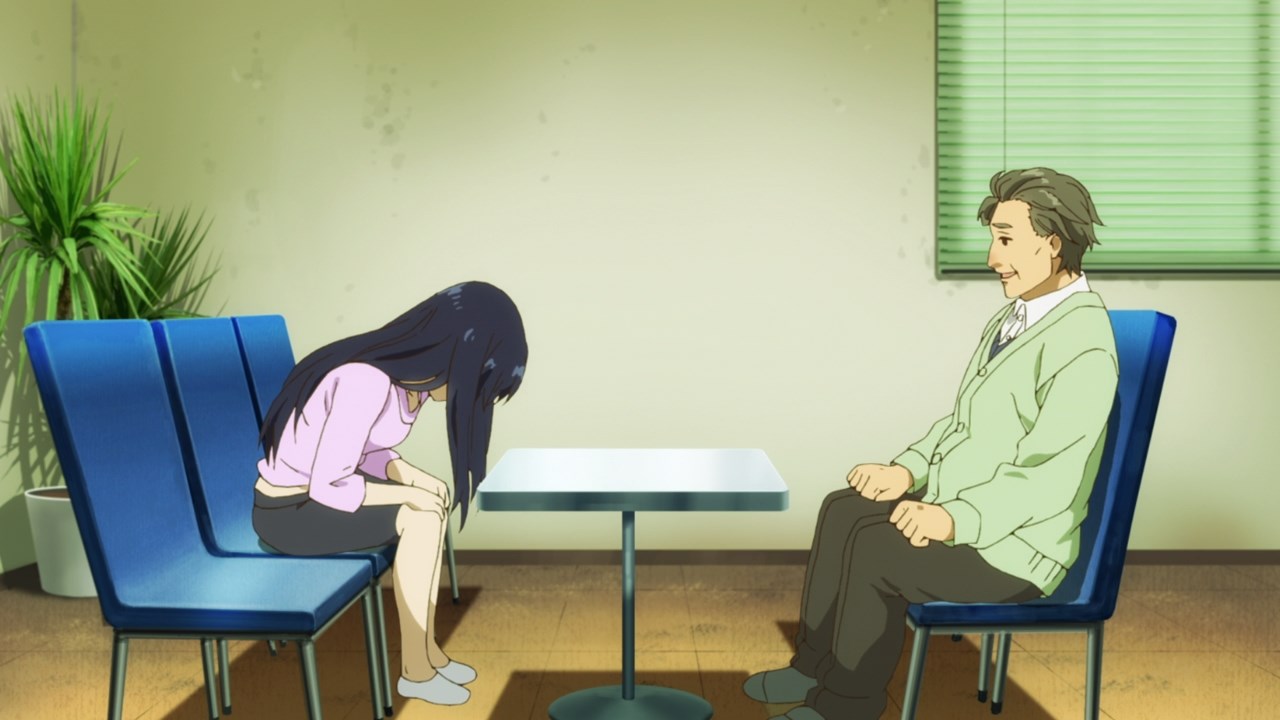 Now then, let’s talk about Kaoru Sakakibara where she’s having a serious conversation to Mino-san, specifically rent and electrical bills in which they’re not yet paid.

Well, seems that Alice in Theater is in danger of losing their stage, therefore they need to make some money to pay those bills. 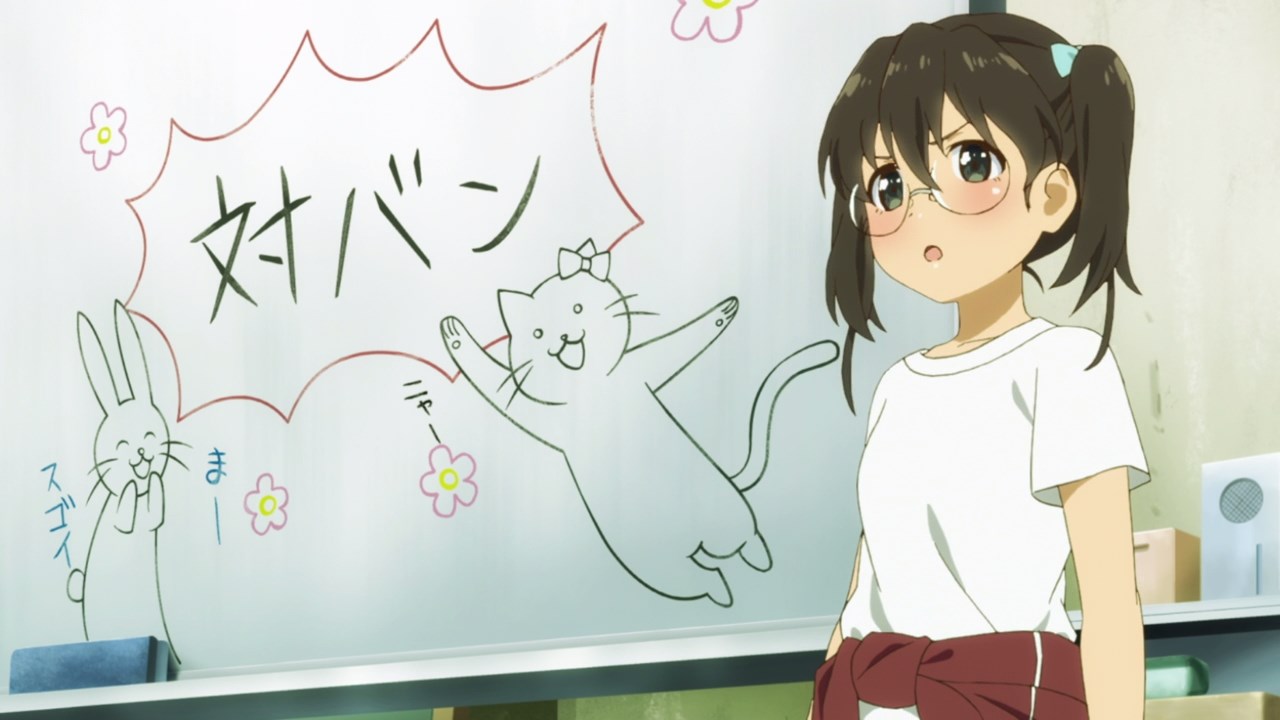 That’s until Aimi Fujita suggested to do guerilla performances. Basically, what they’re gonna do is to perform as idols rather than stage actresses. 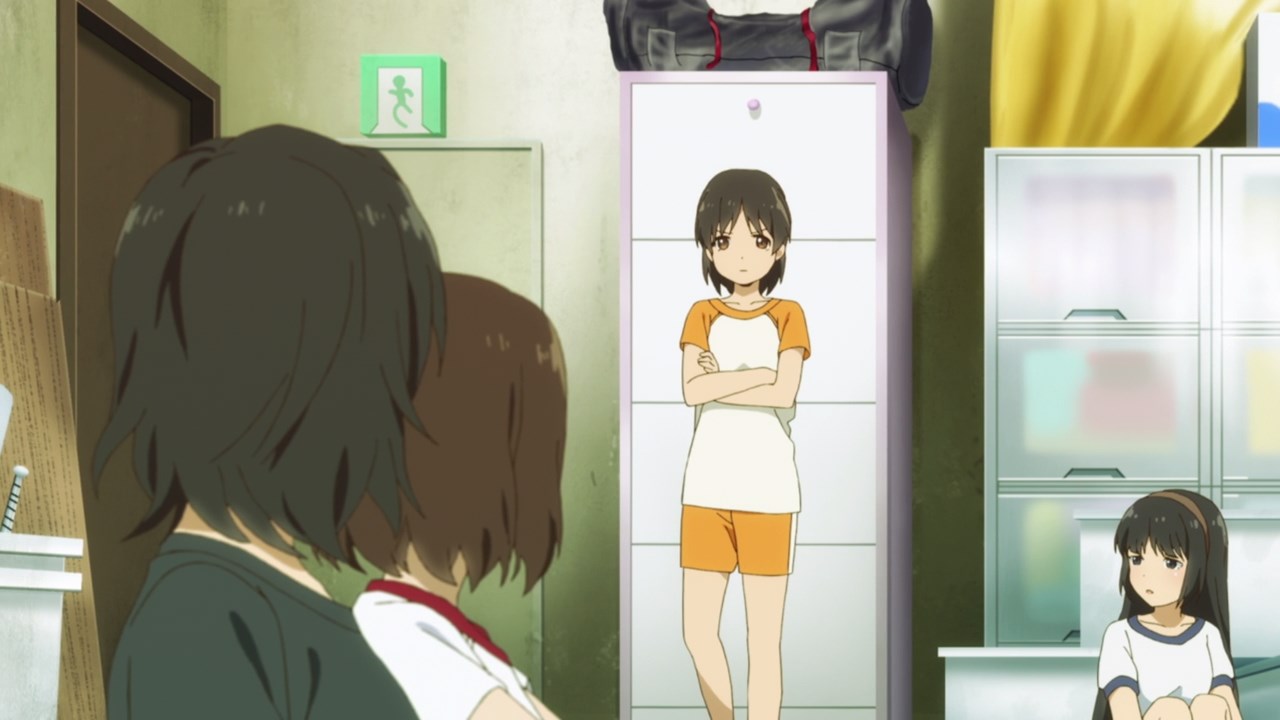 And speaking of Airi Kagami, she decided not to participate because it’s not her job to sing and dance as an idol.

I mean, she’s a stage actress after all but let’s not forget that a stage play, especially musicals, involves singing and dancing in addition to acting. 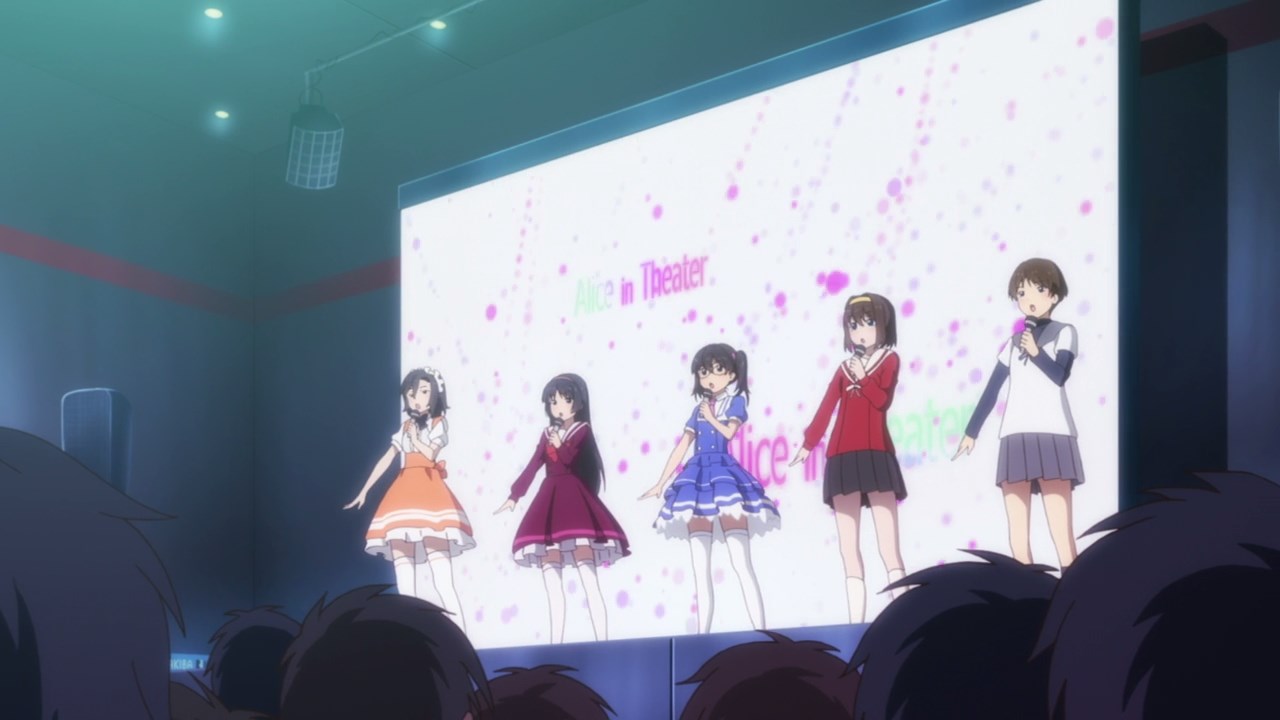 Anyways, the members of Alice in Theater went to Radio Kaikan in Akihabara to perform at a small audience. C’mon, they needed some cash to fund their little theater after all. 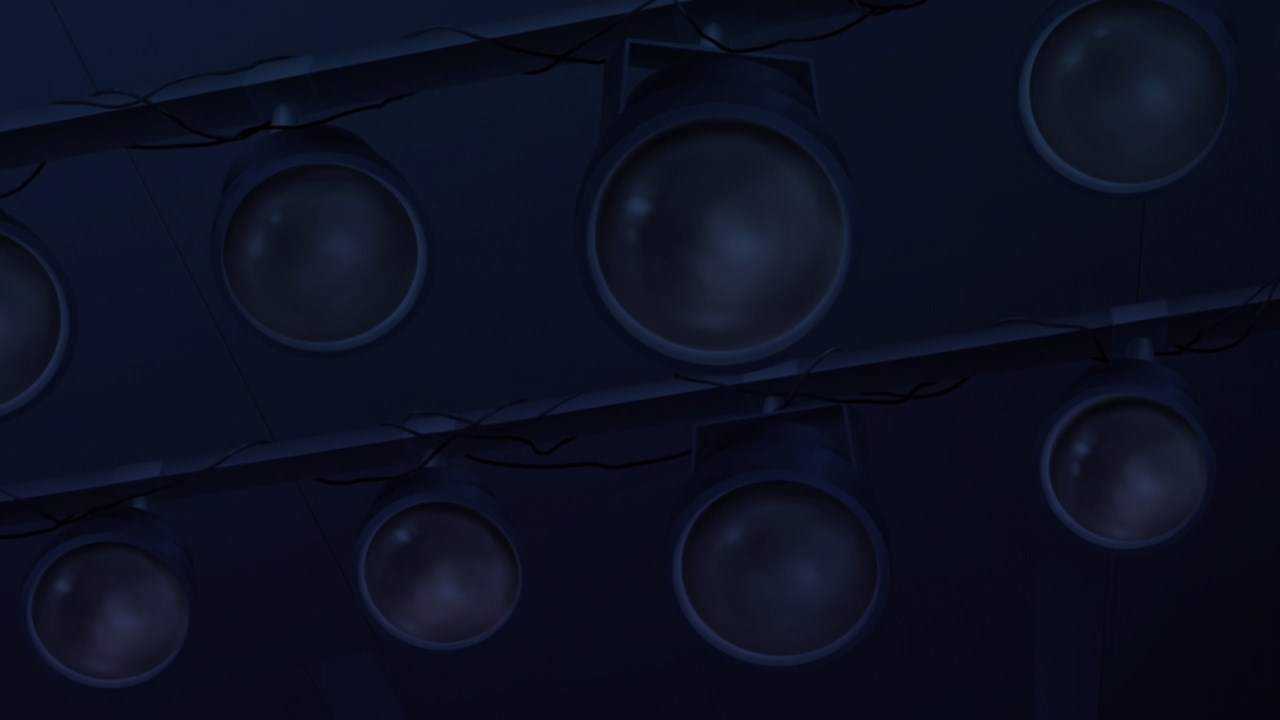 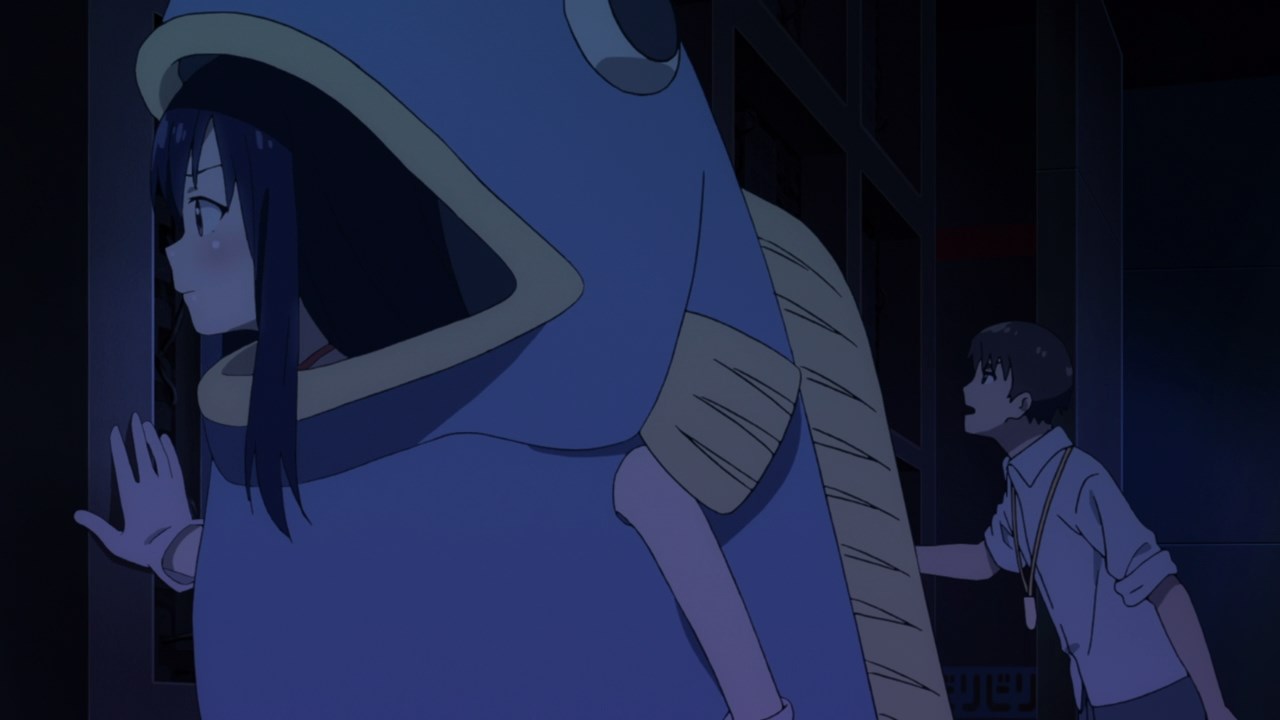 However, it appears that there’s a blackout and it’s a common occurrence ever since the disaster happened 5 years ago. In any case, looks like their mini-concert is cancelled. 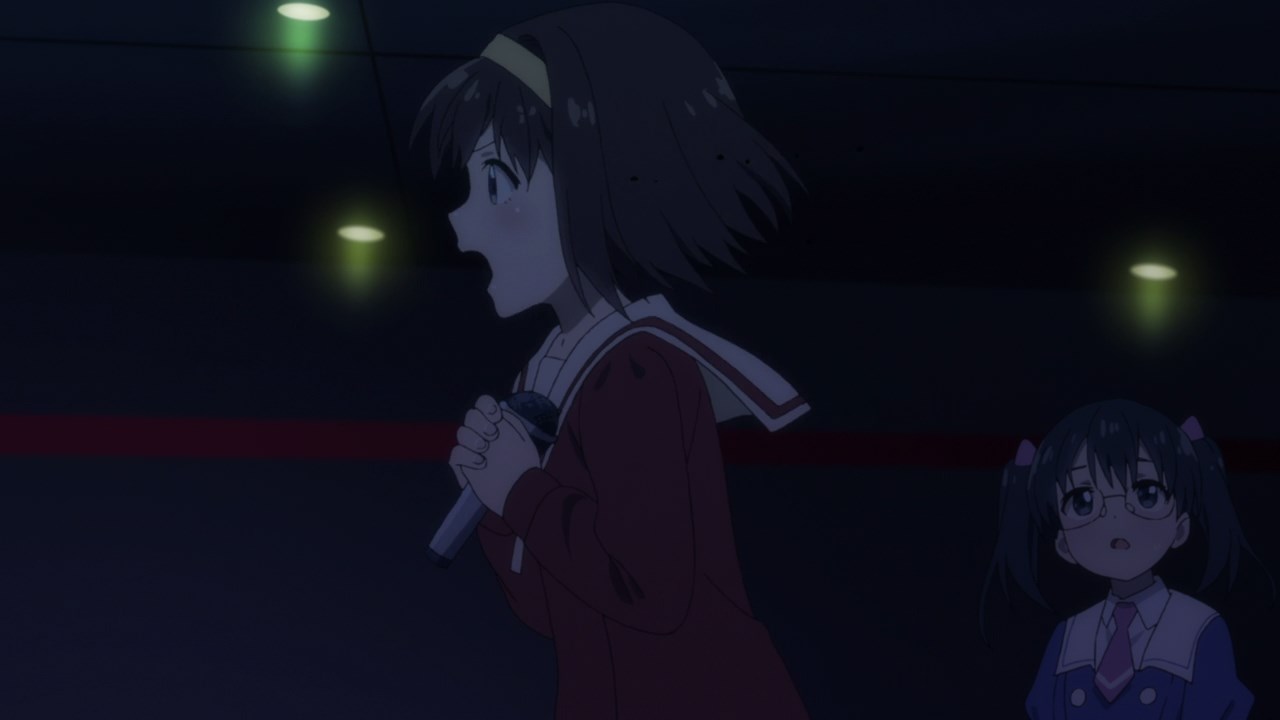 But then, Seria Morino decided to act in front of the audience until electricity is restored. Unlike before where she’s trembling, looks like Seria got the courage to deliver the lines. 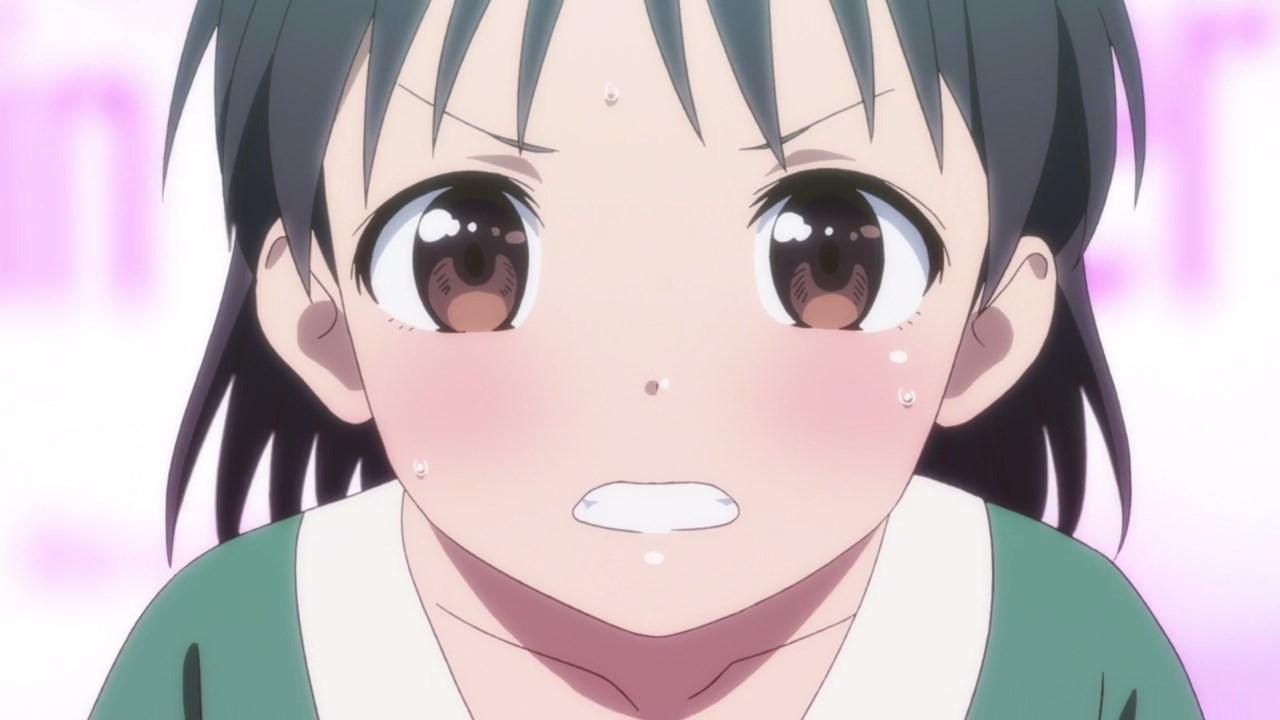 Oh and here’s Airi Kagami where she’s finally appeared. Not only that, but she came at the right time when electricity has returned in Radio Kaikan. 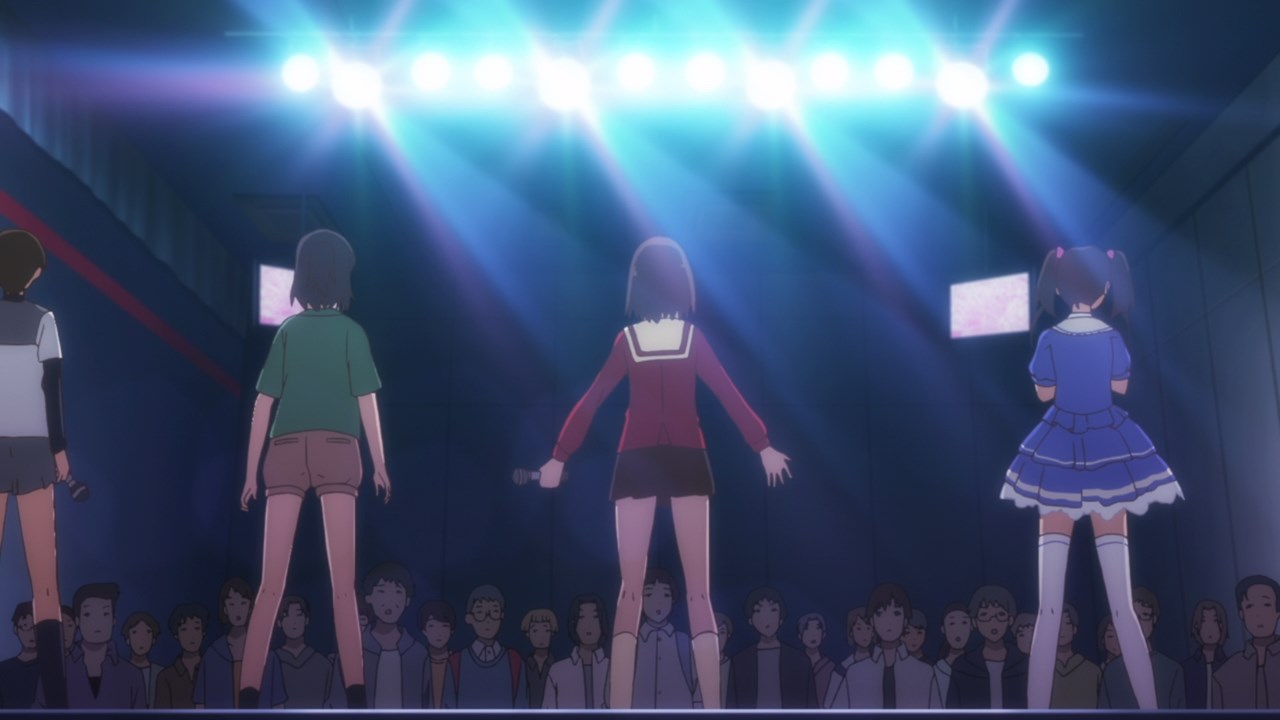 In any case, looks like their mini-concert was a success, although I’m not sure if this venture will rake in some money. At least they’re not doing something risque. 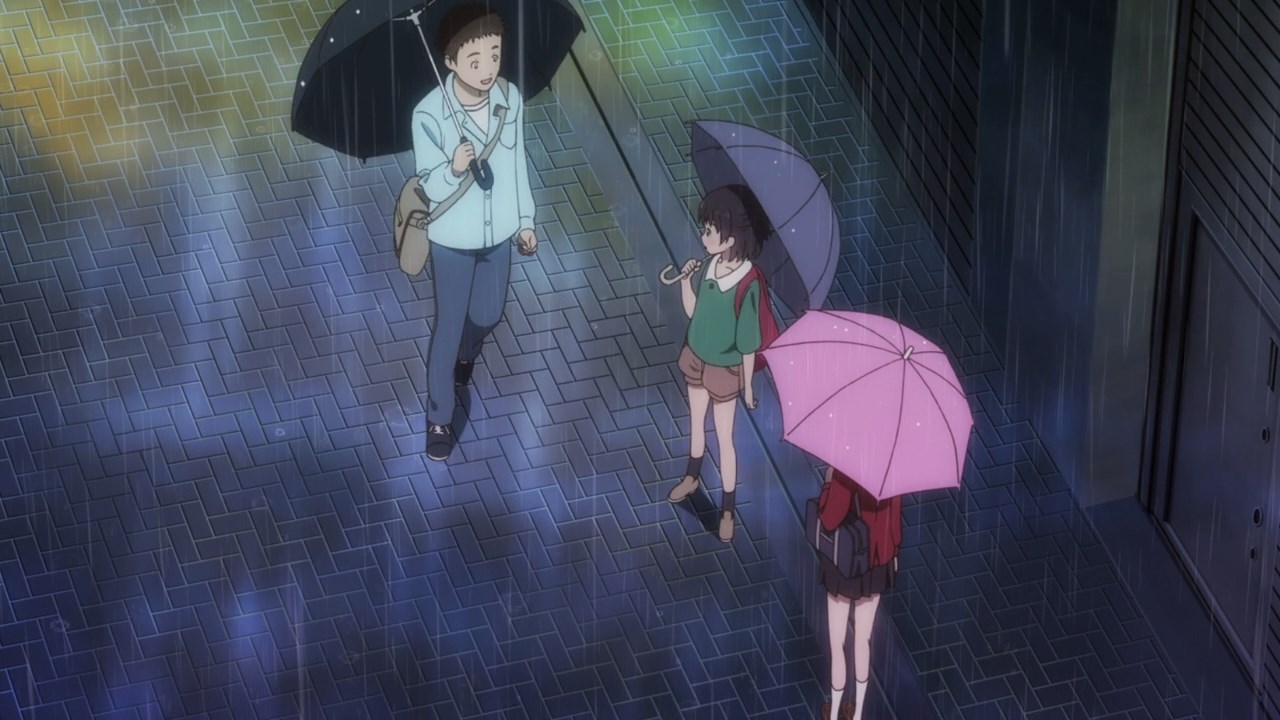 One last thing, looks like one fan recognized Airi Kagami as this person calls her Ai-Ai. It’s nice that Airi has fans but why she’s being called as Ai-Ai? 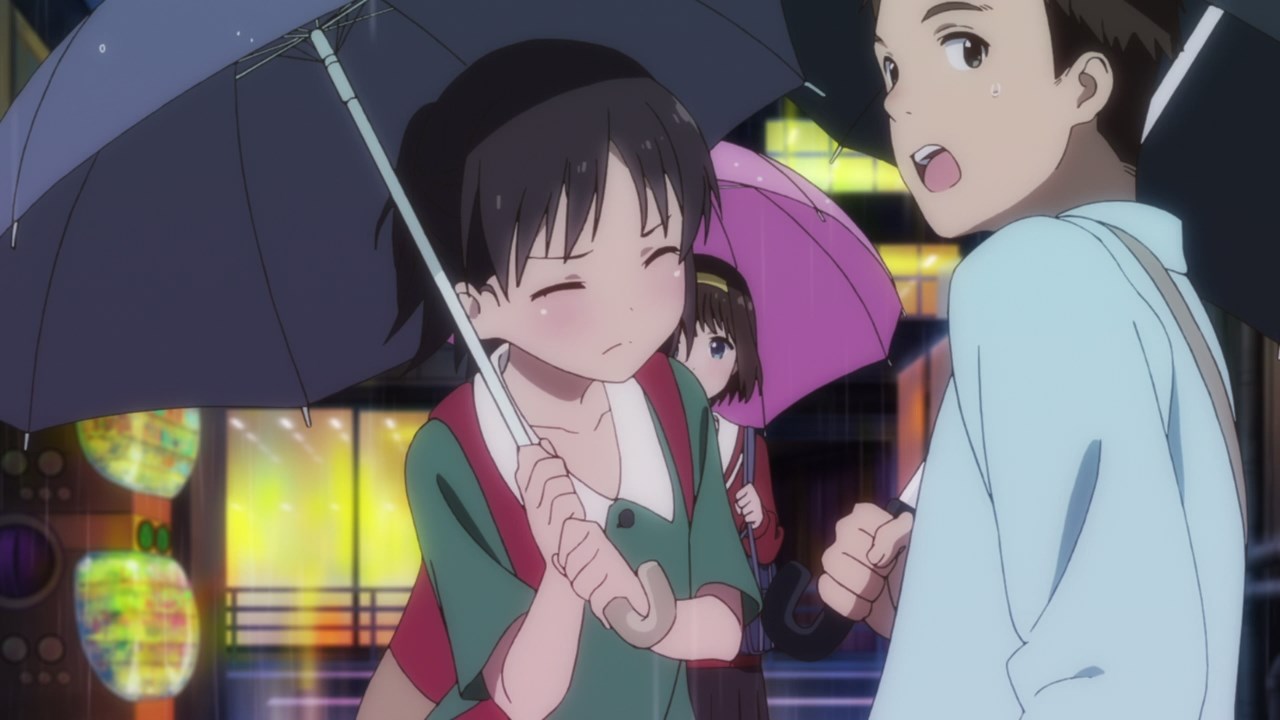 Unfortunately, Airi simply runs away where I have a feeling that she doesn’t want anyone calling that name due to some troubled past.

Still, I’m hoping that Airi is alright on the next episode ’cause it would be bad if Alice in Theater loses one member.