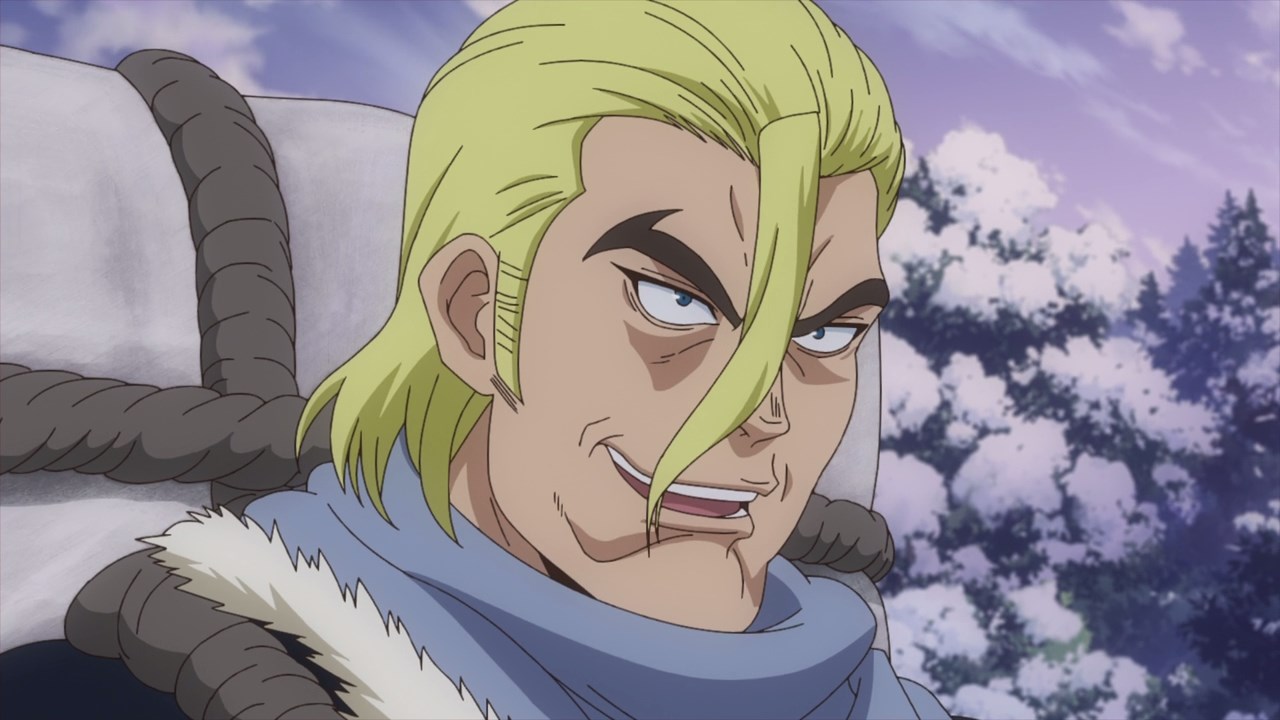 “Would it be better if we can just capture and kill Homura?”

Well, looks like Magma wants to murder Homura since she’s a pain in the ass to them, although violence is not the solution when it comes to dealing with one of Tsukasa Shishio’s trusted soldiers. 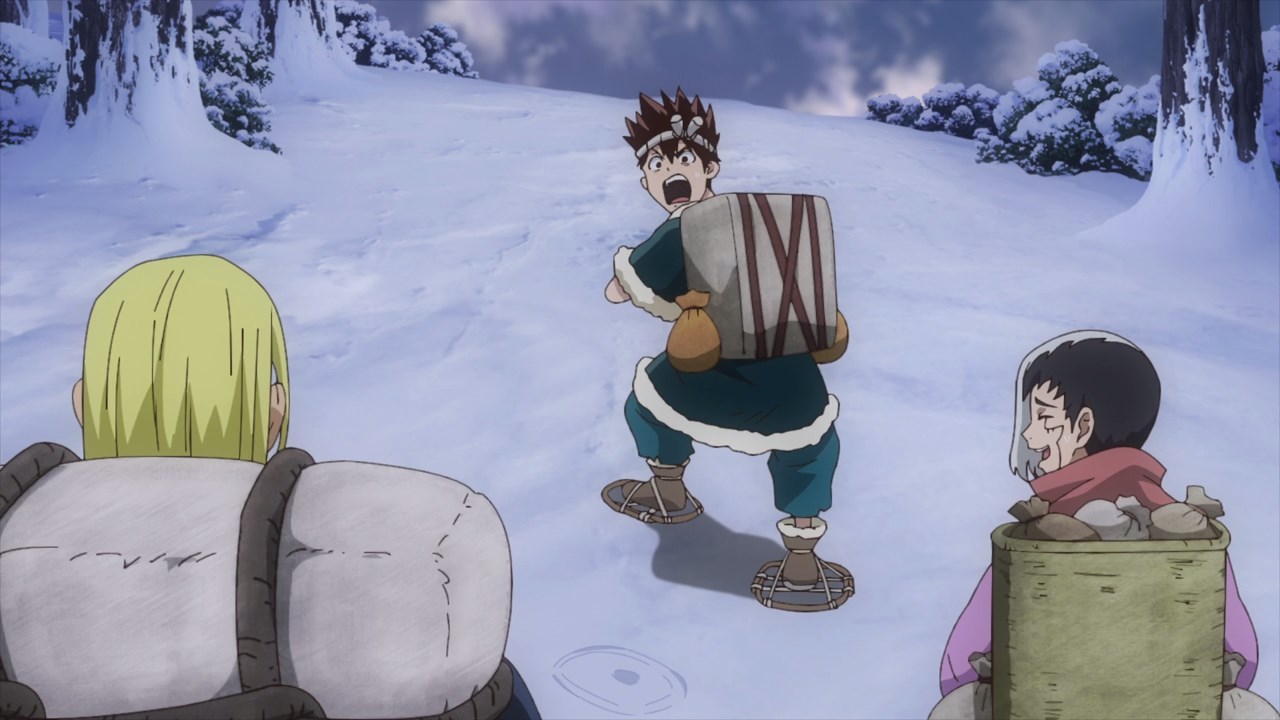 Still, they have to make haste on taking the cellphone to the Empire of Might. But as for Homura, looks like that pesky scout is being taken care of. 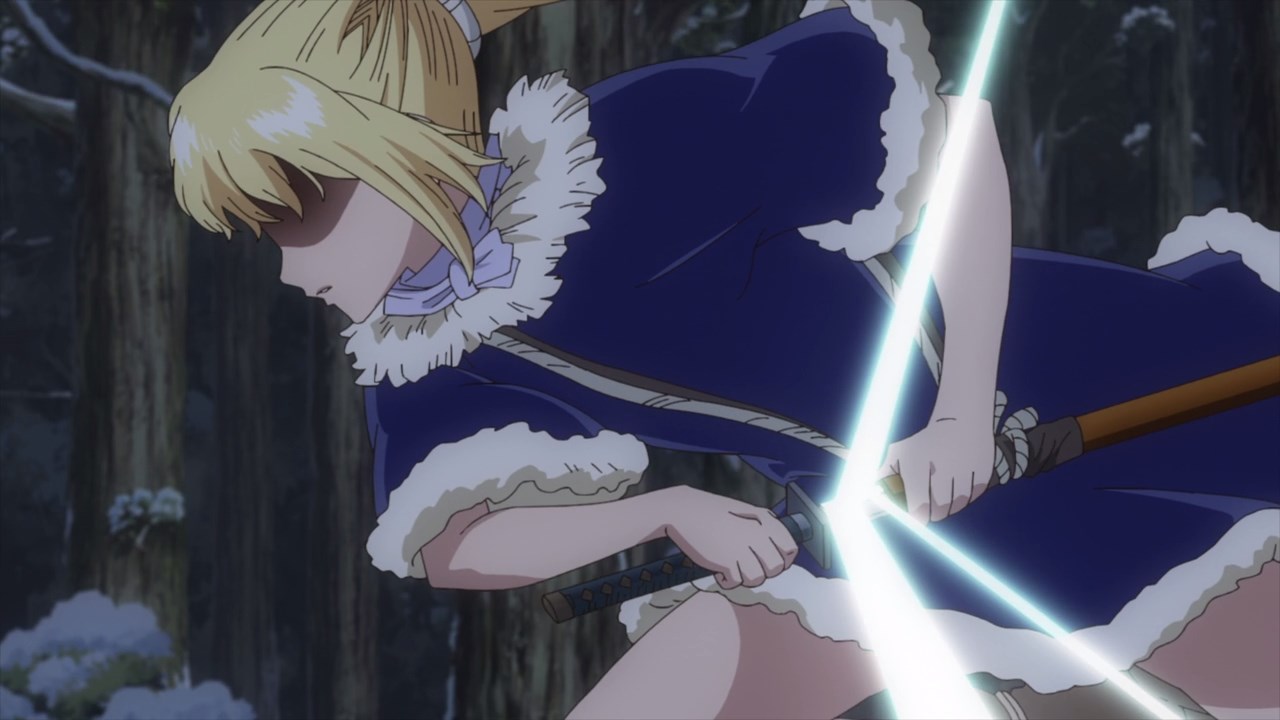 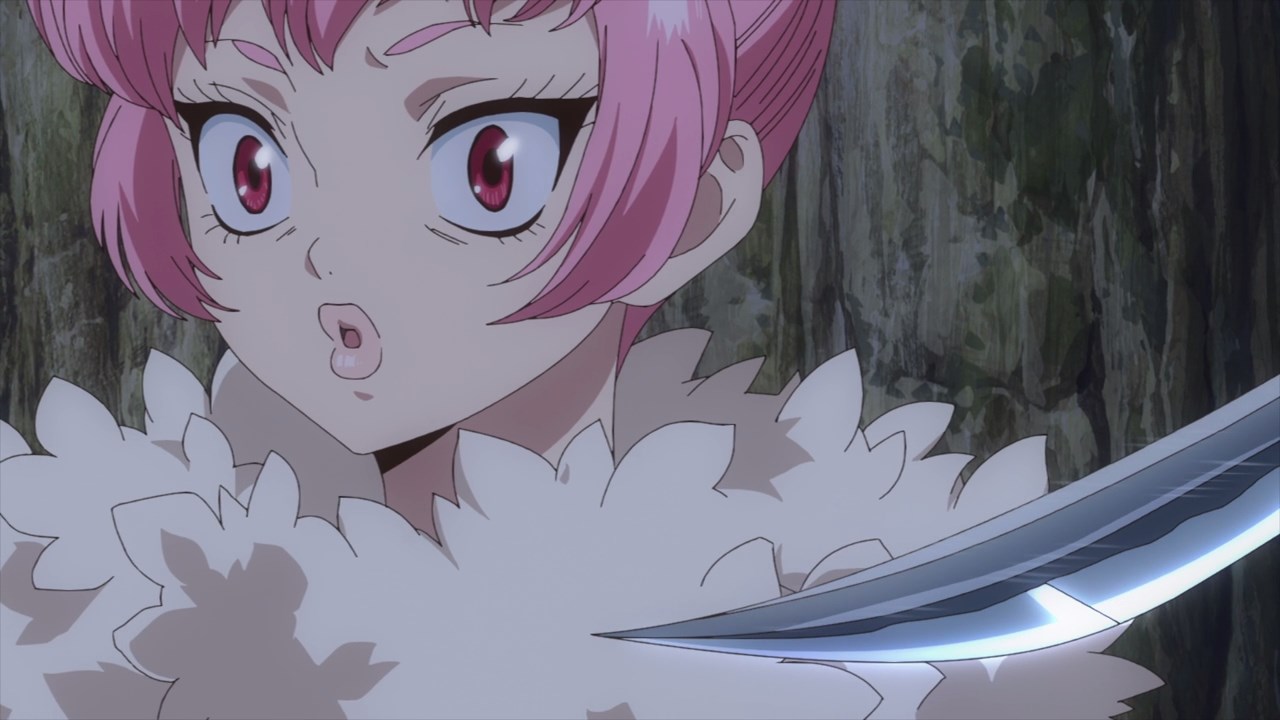 C’mon, there Kohaku where she’s about to cut Homura’s neck with a katana, although she haven’t kill someone in her life so Kohaku might screw it up. 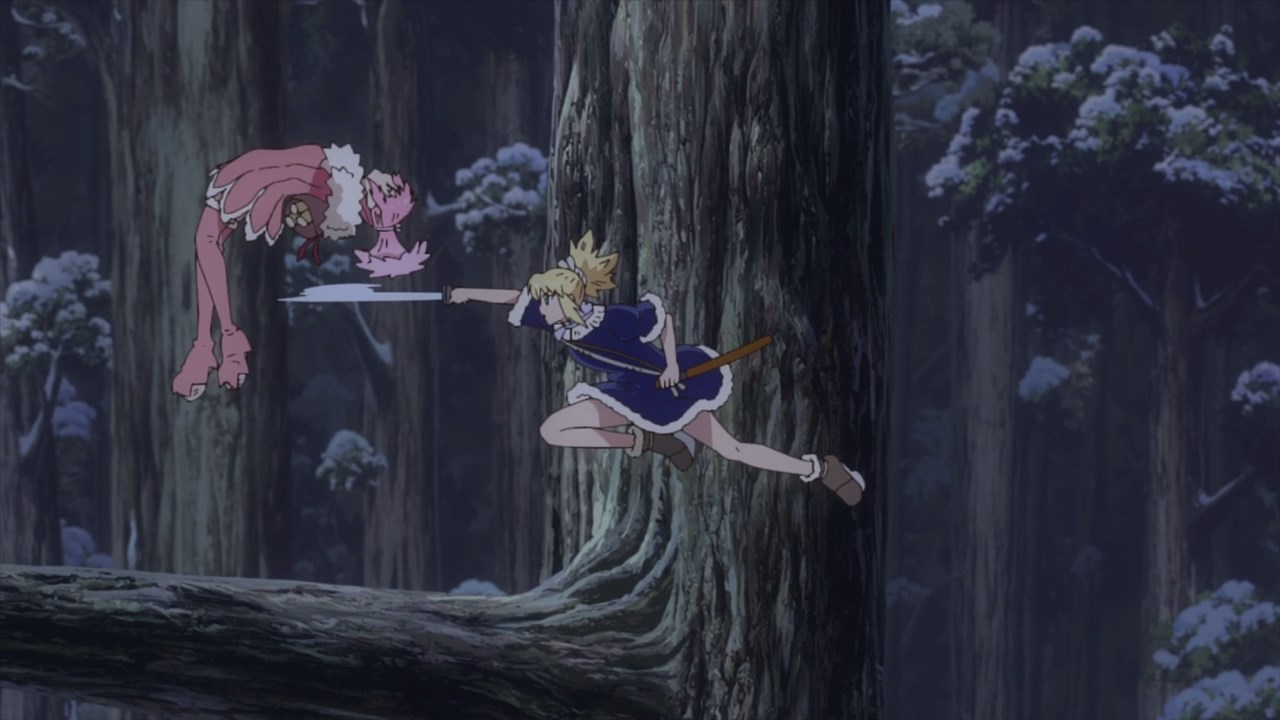 Unfortunately for Kohaku, Homura made a back-flip as she dodges Kohaku’s attack. How did she managed to dodge that? 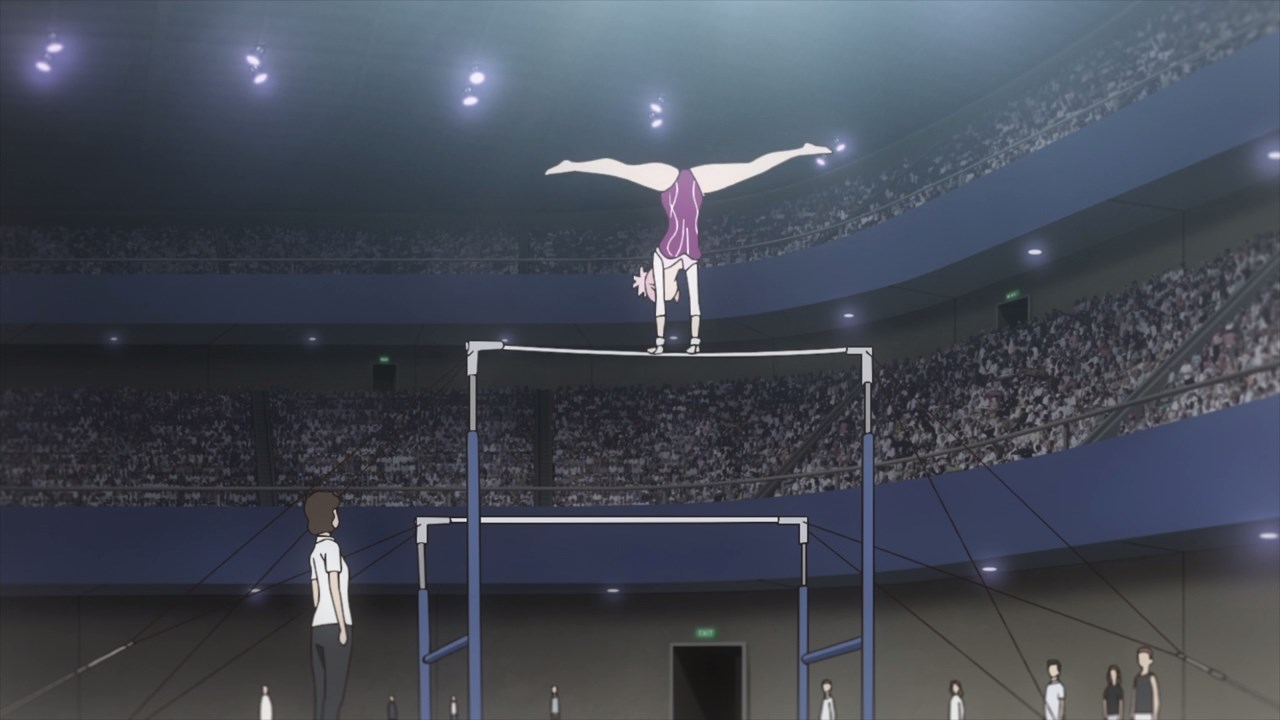 Well, turns out that Homura is actually a gymnast in the old modern world. Man, Tsukasa sure pick up the right people for his empire but still, I wonder if Homura won awards before being petrified? 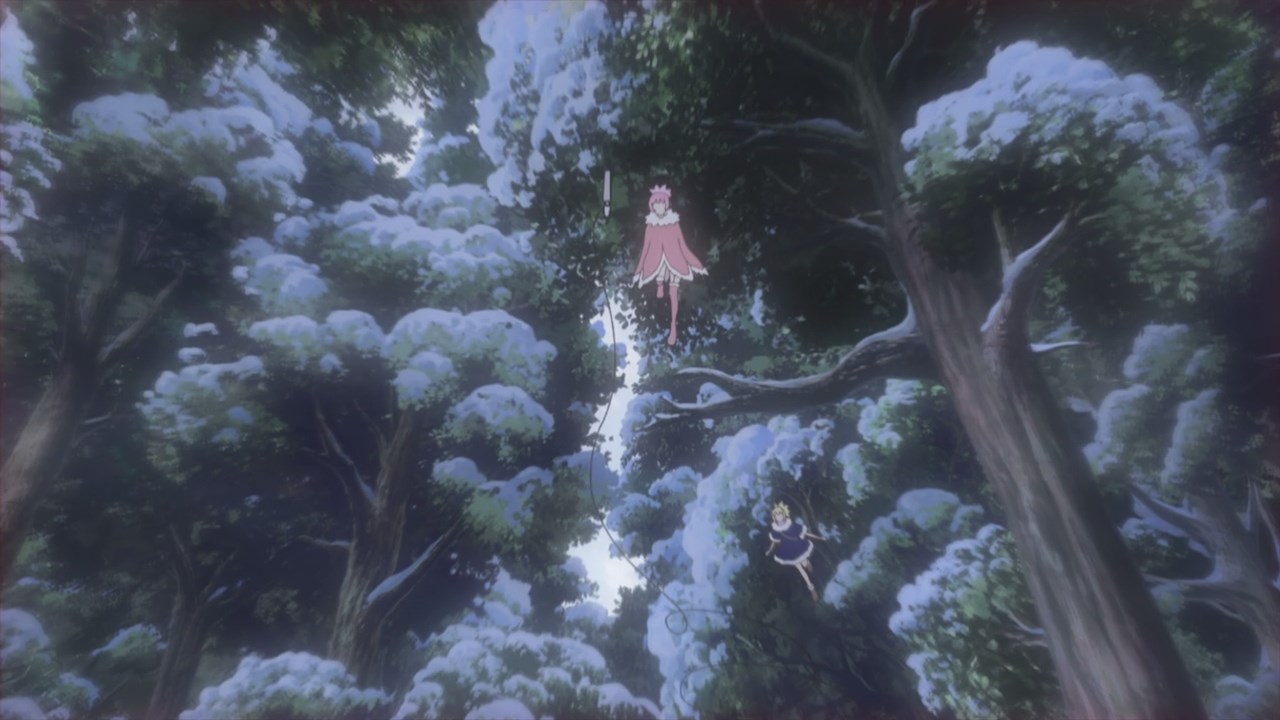 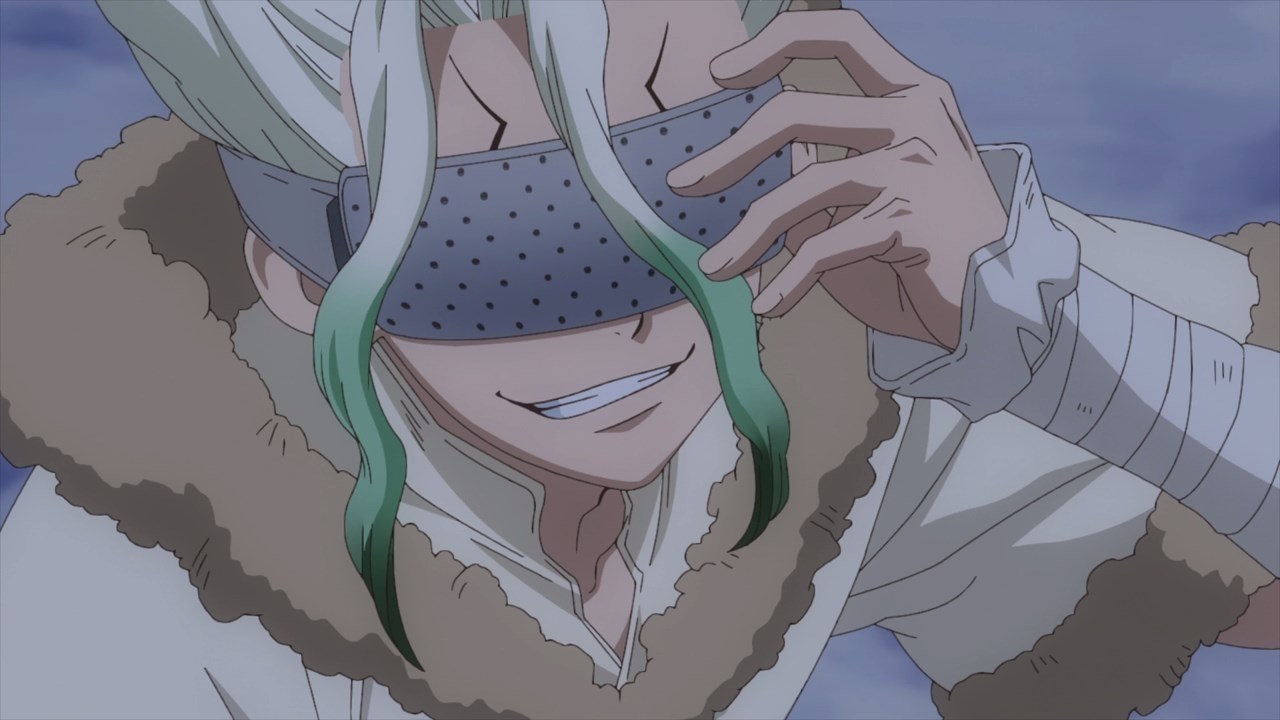 With that said, it’s time for Senku to stop Homura with his new invention. Of course, he needs to cover his eyes just to be on the safe side. 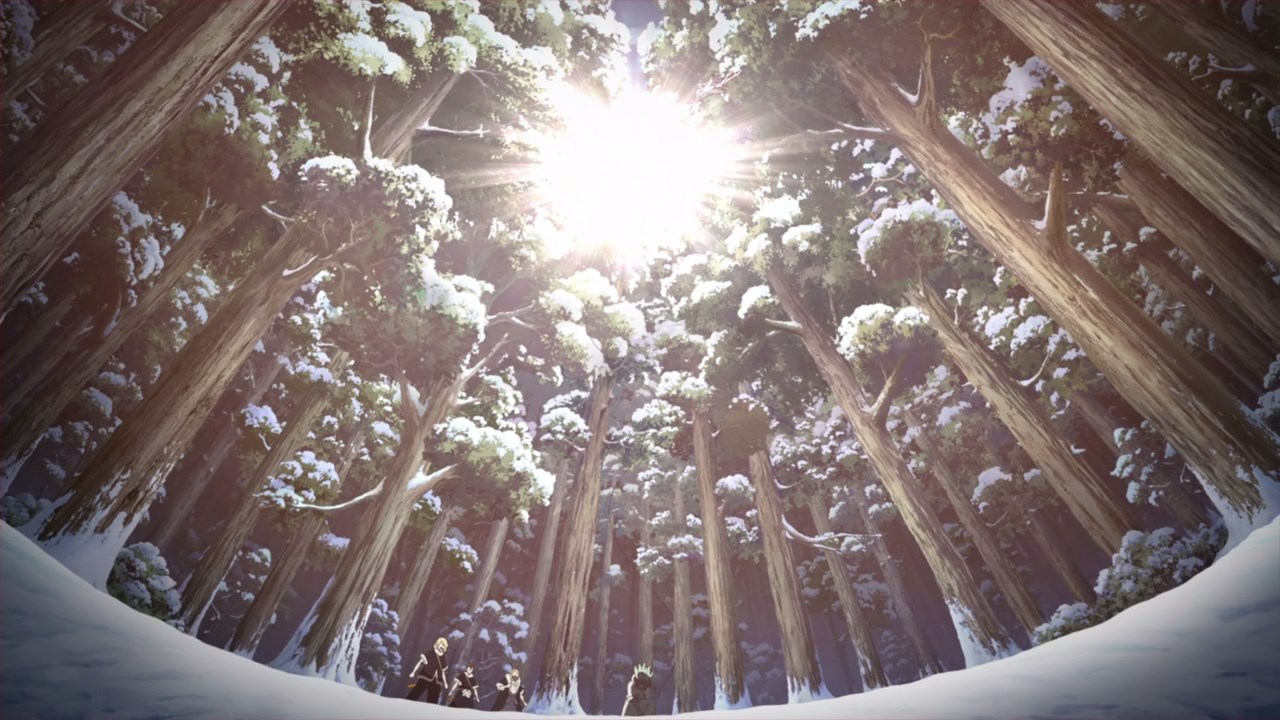 Anyways, Senku created a flare in which he used a spare light bulb and magnesium to produce a blinding light. 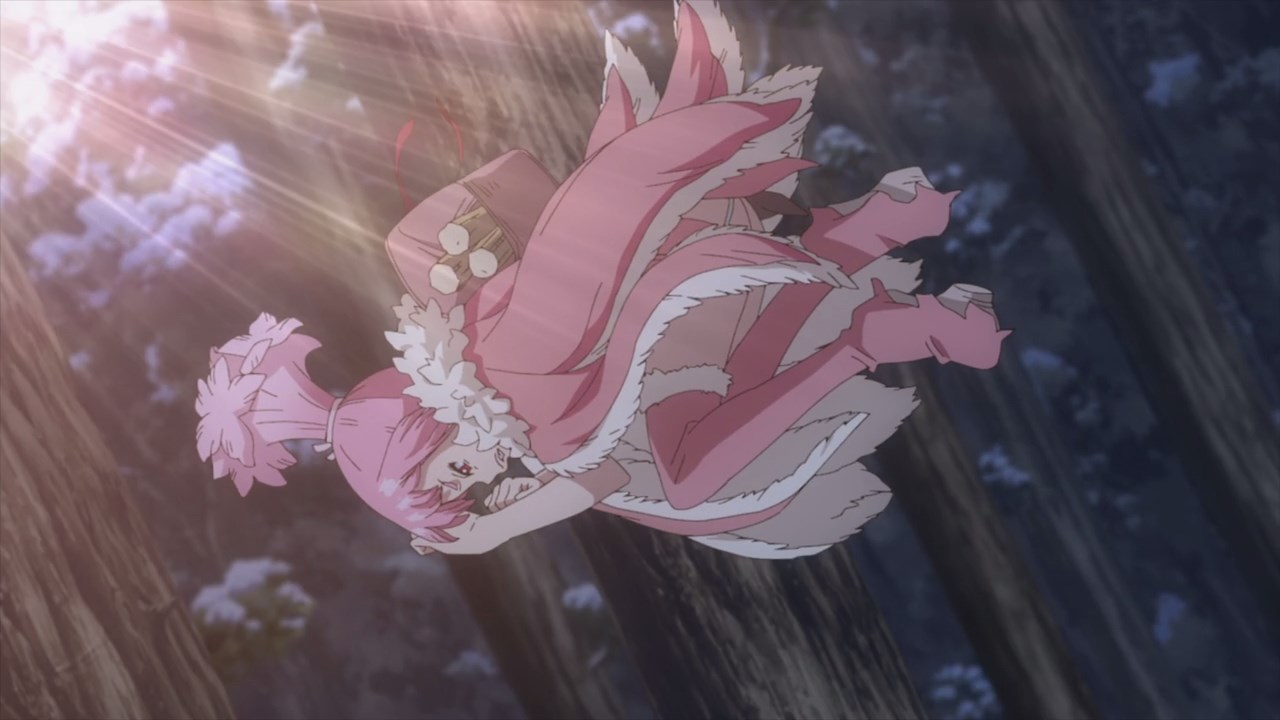 And really, it’s very effective against Homura where she got blinded and fell down. 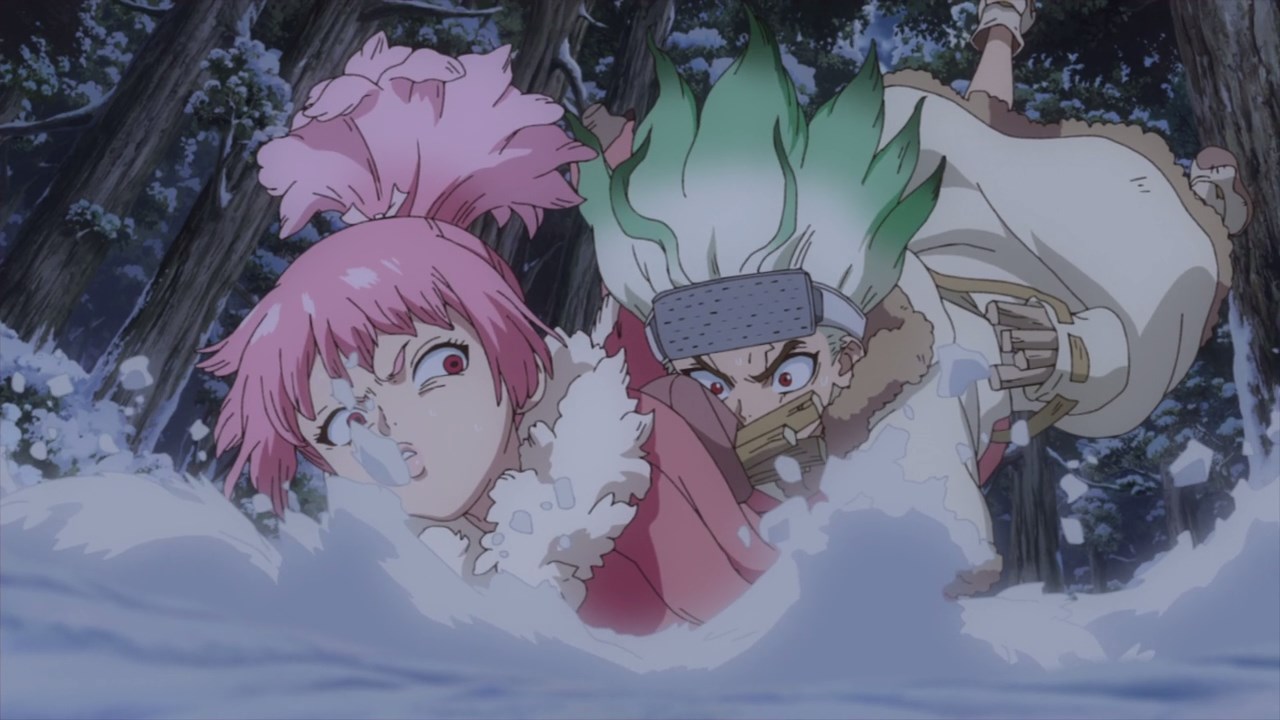 In any case, looks like Tsukasa Shishio’s trusted scout is finally captured thanks to Senku’s inventions. 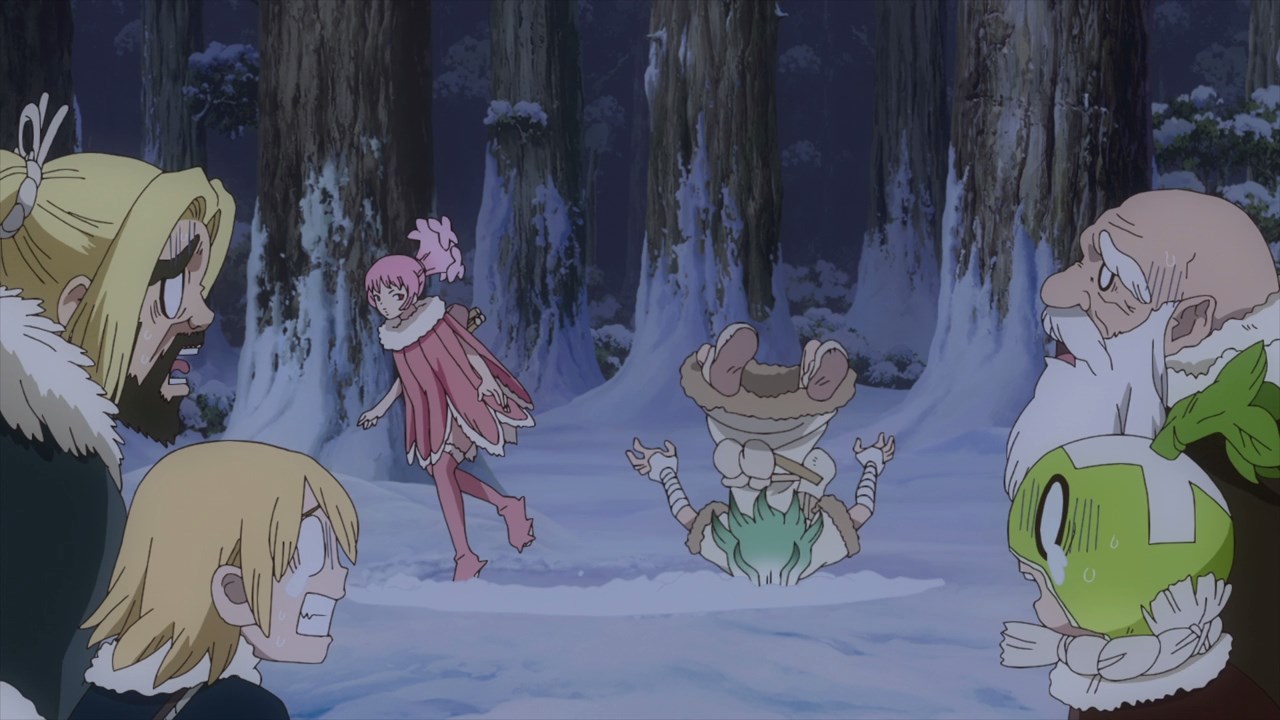 On second thought, it appears that Senku is not the guy who can hold a person down as Homura got away. Even the villagers found it lame that Senku let her go. 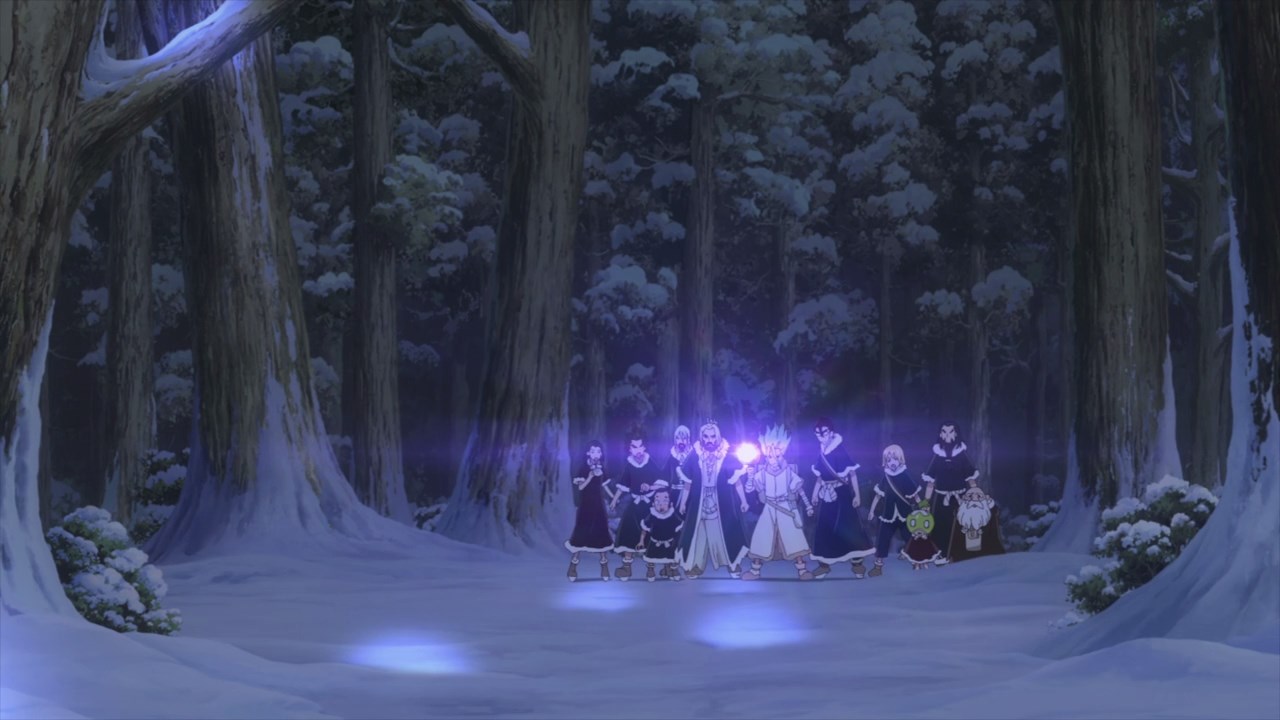 But don’t worry though as he can track Homura by using his newly-created UV lightbulb to find her trail.

Oh yeah, and Senku smeared Homura’s body with scheelite powder which can be seen with UV light. Of course, Homura will wash the powder away once she notice it. 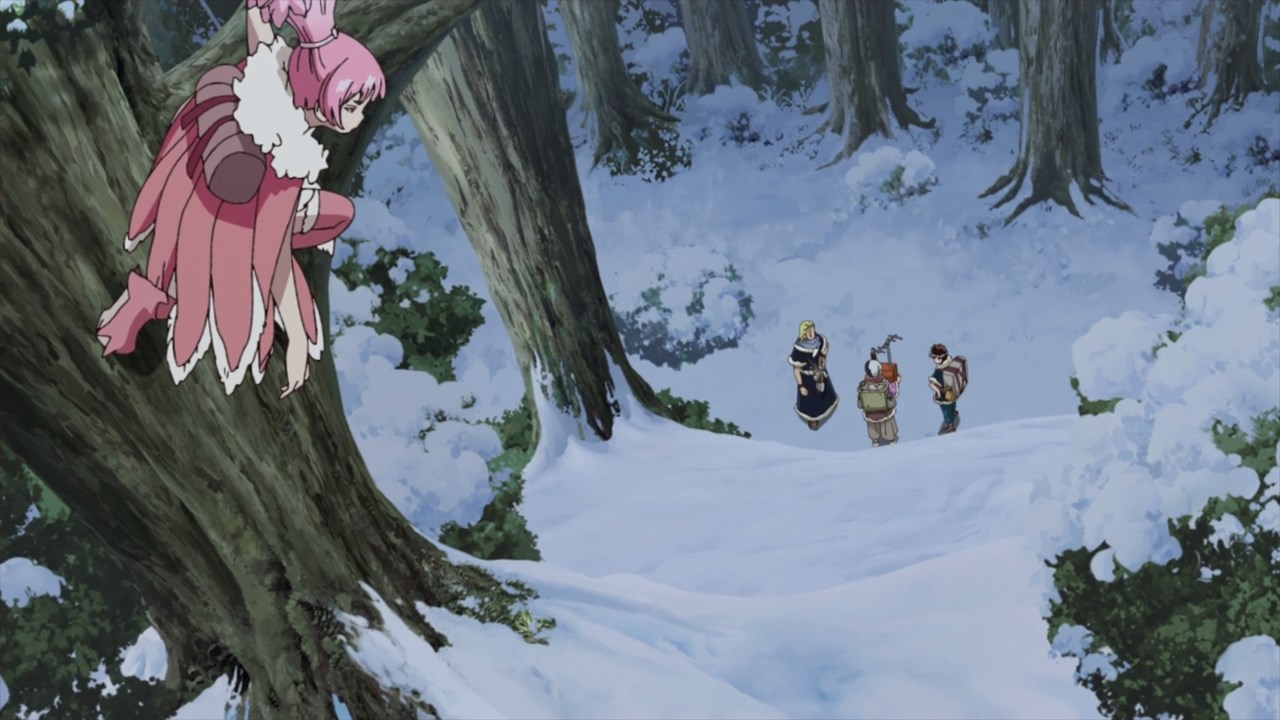 But let’s go back to Homura where she finally caught up with Chrome’s team as they’re setting up the phone line. 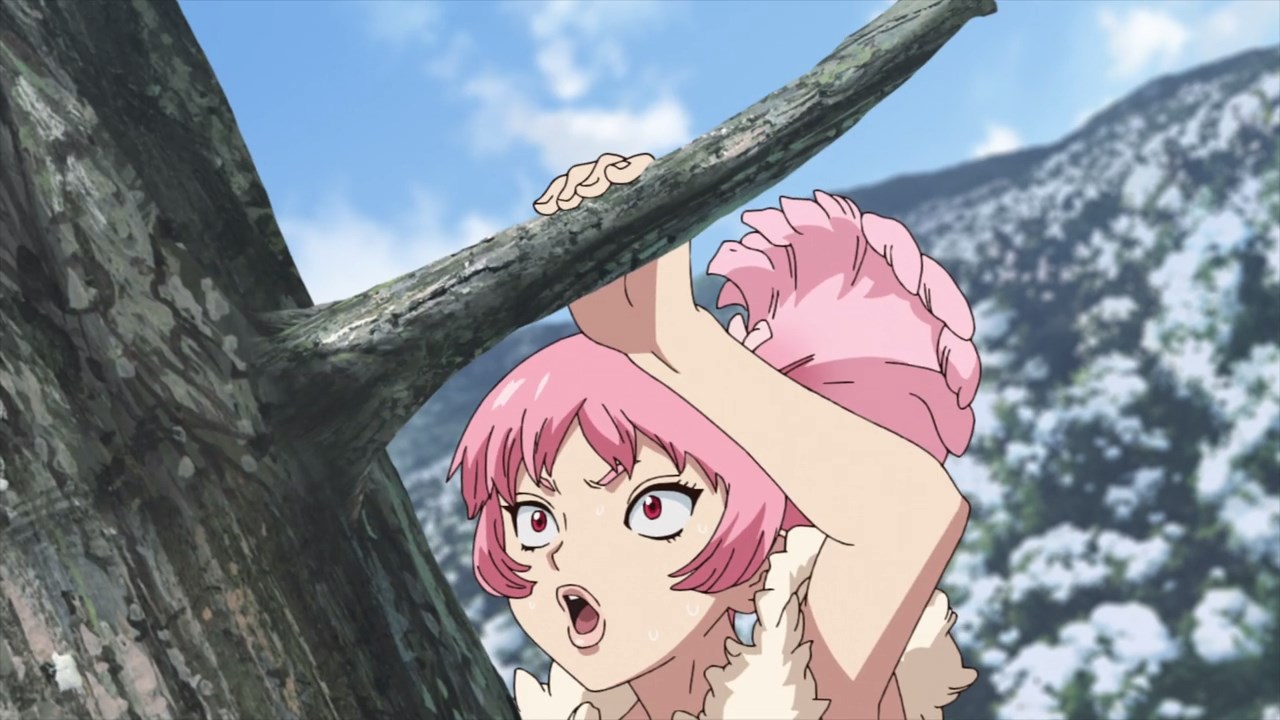 And once she realized that they’re using radio communication to destroy the Empire of Might, Homura wasted no time on finding the antenna so she can destroy it. 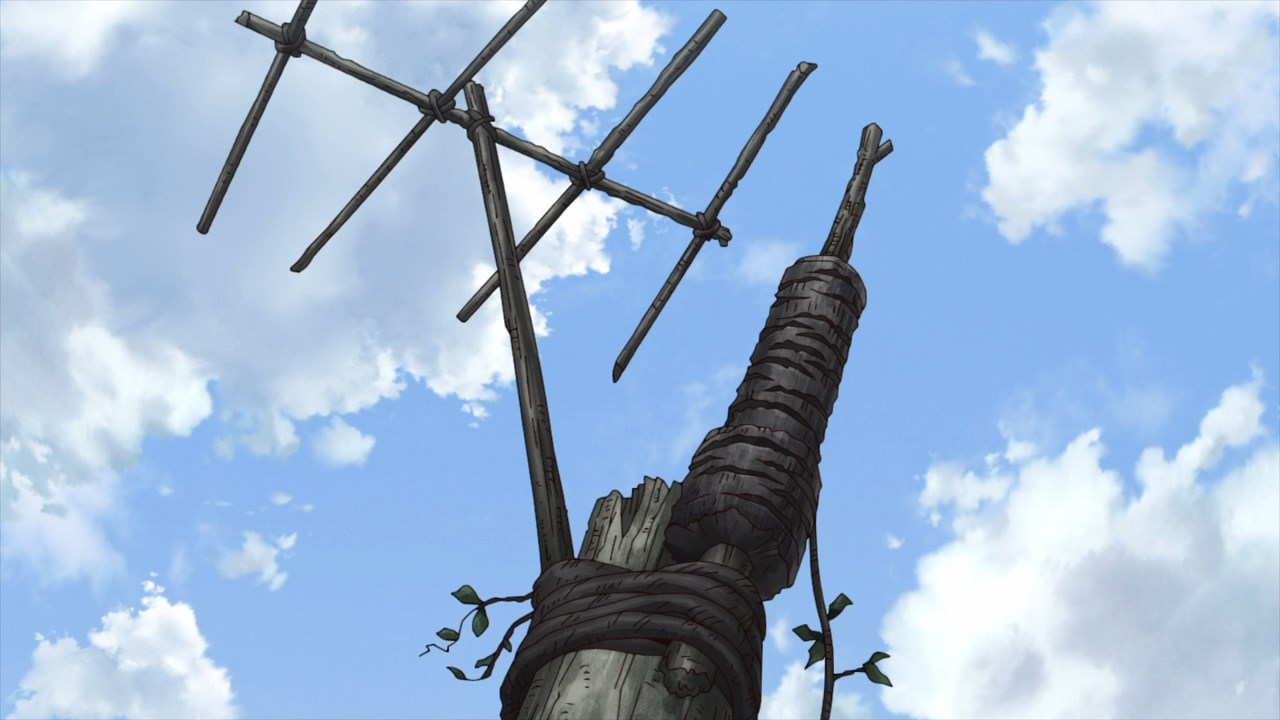 Except that Homura found a fake antenna instead. Looks like she got caught by one of Gen Asagiri’s tricks. 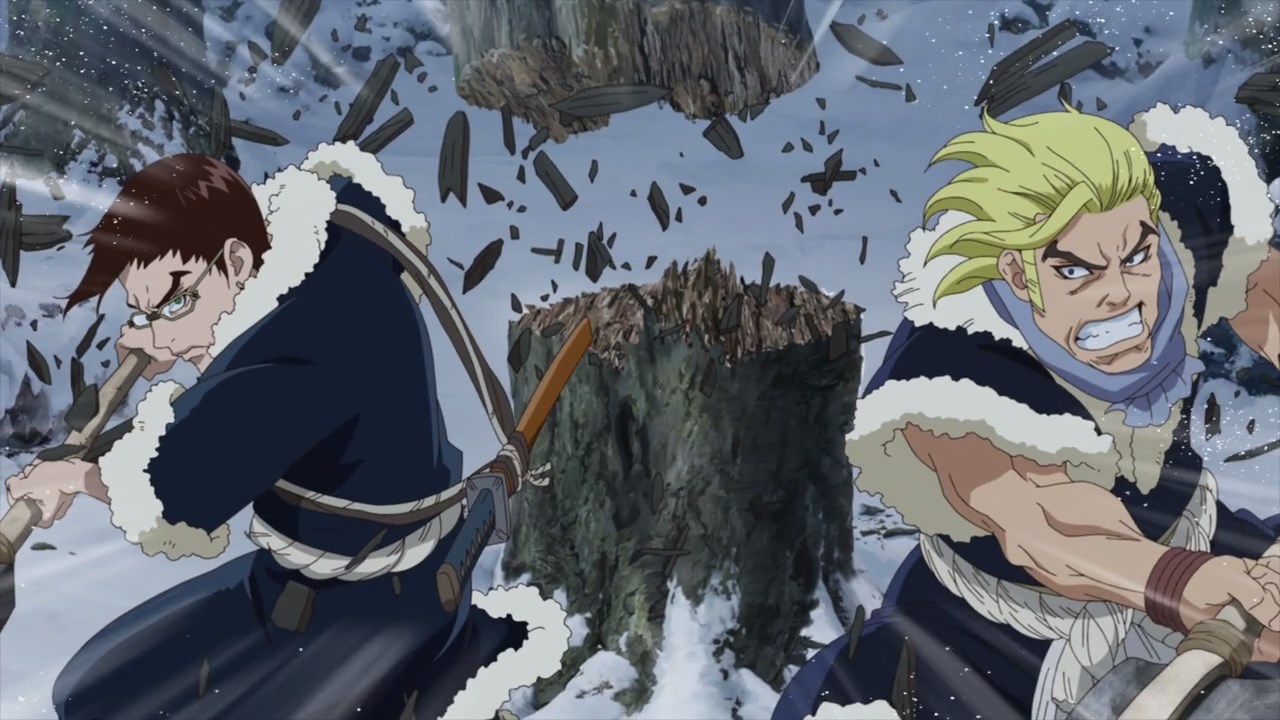 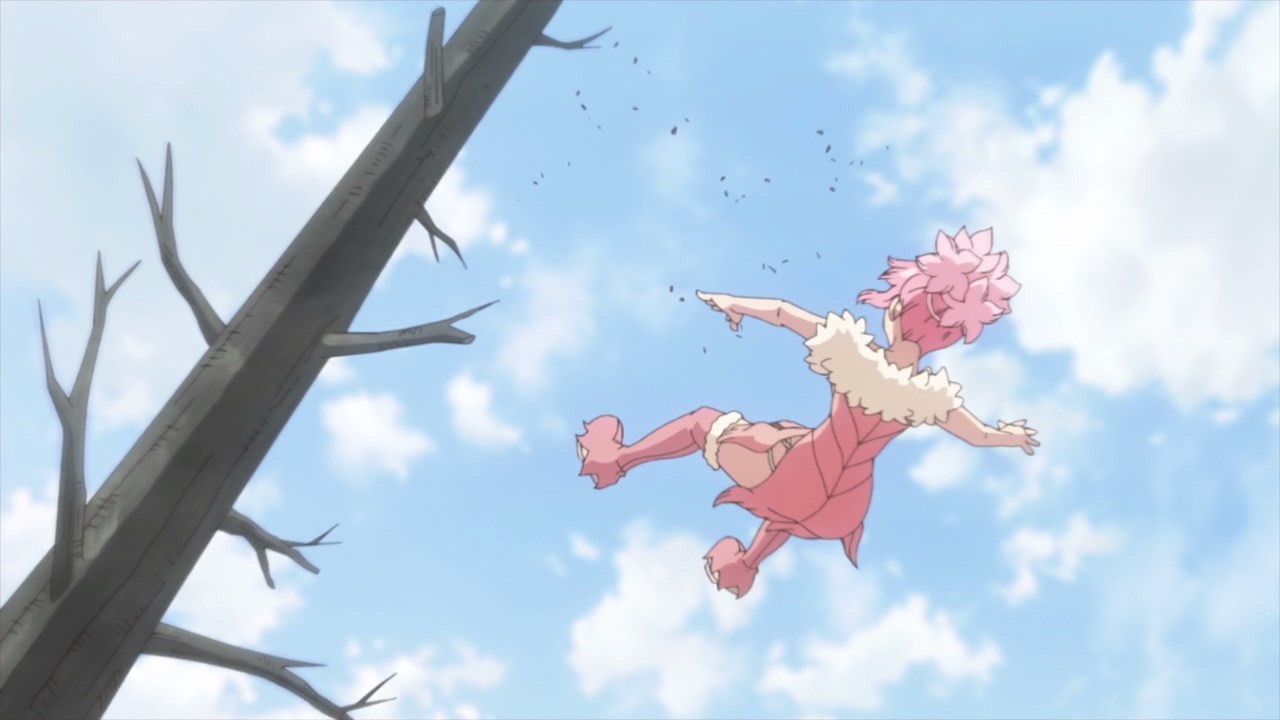 And since she got fooled by a mentalist, it’s time to bring her down literally as Kinro and Magma chop the tree down until Homura falls off. Looks like Senku and his friend have caught up with Homura. 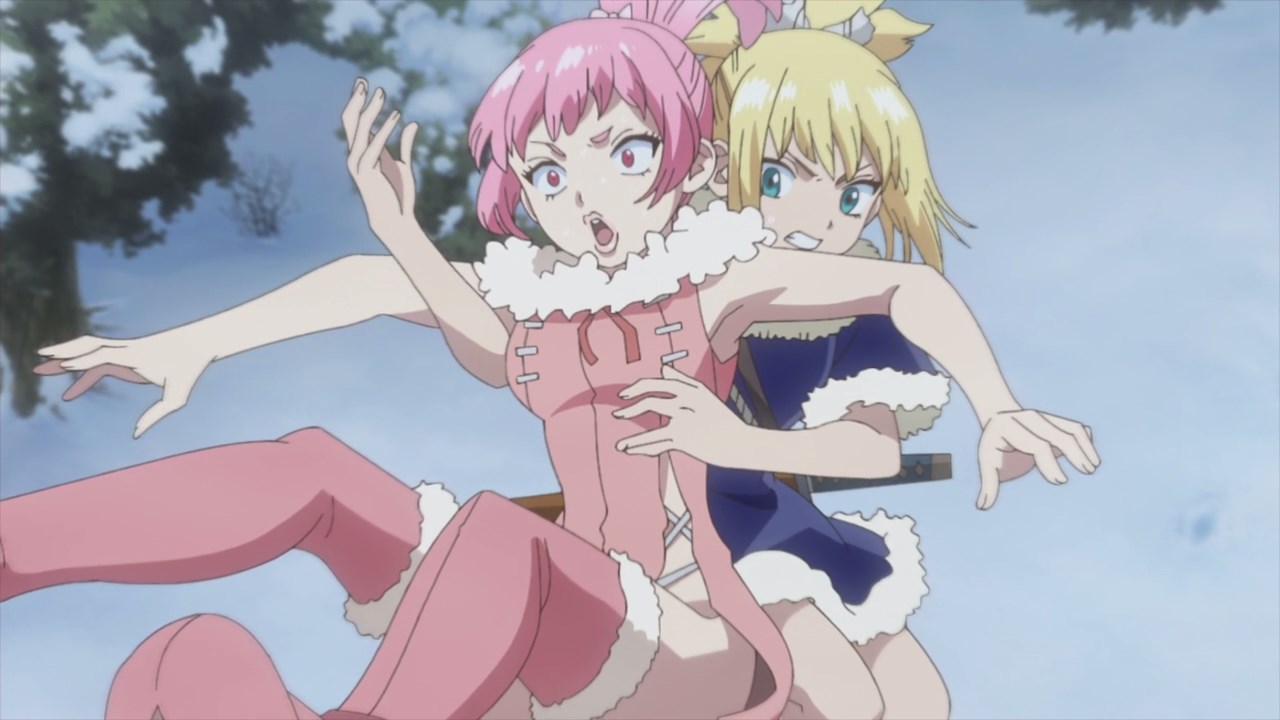 In any case, looks like Tsukasa Shishio’s trusted scout is finally captured and this time, Kohaku put a tighter grip on Homura. 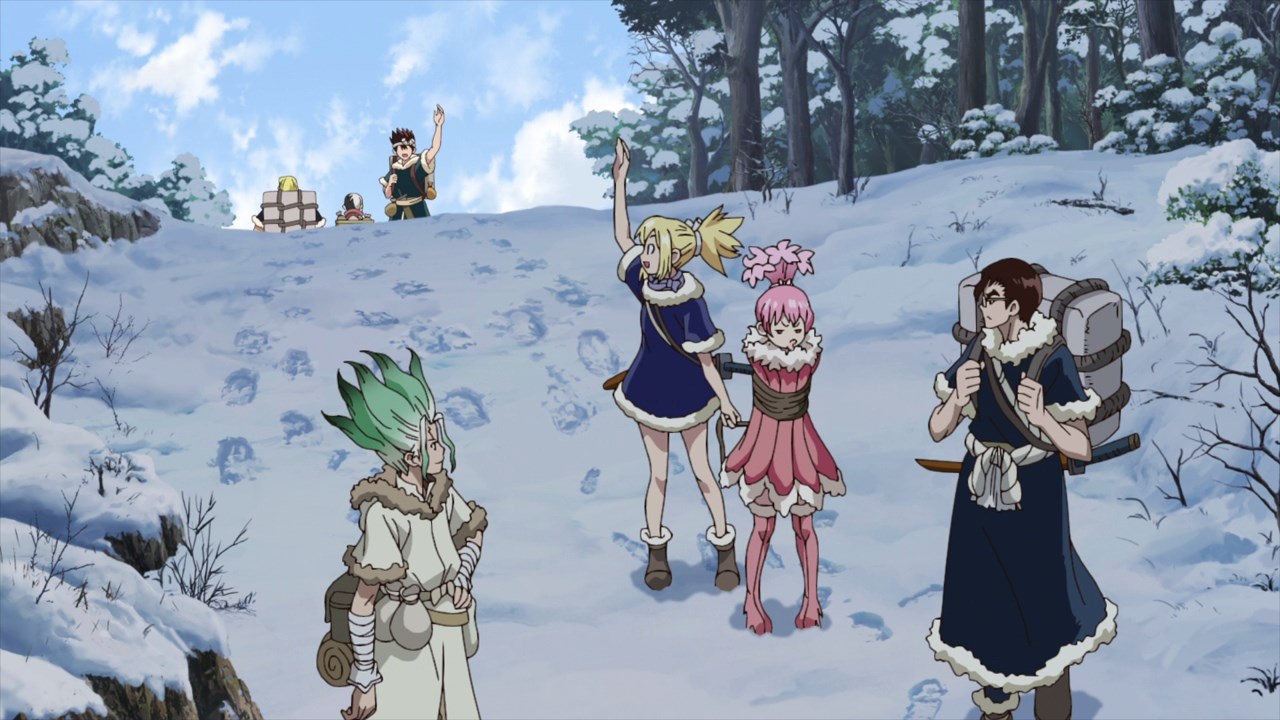 Of course, I’m curious on what Senku will do towards Homura as he and his friends head home. Let’s hope that they treat her nicely.

As for Chrome and his team, they’re still going towards the Empire of Might since they have a job to do. 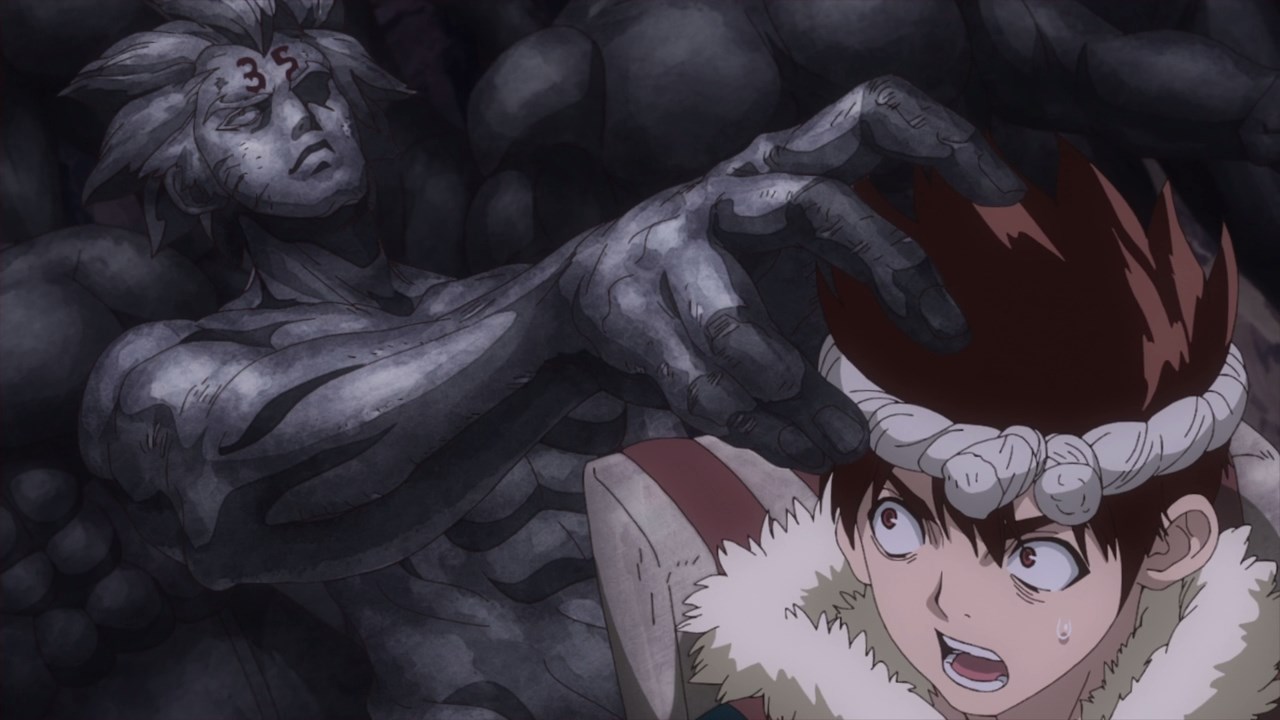 Anyways, they finally arrived at Tsukasa Shishio’s home turf where it’s surrounded by petrified people. Even Chrome is terrified upon looking at them. 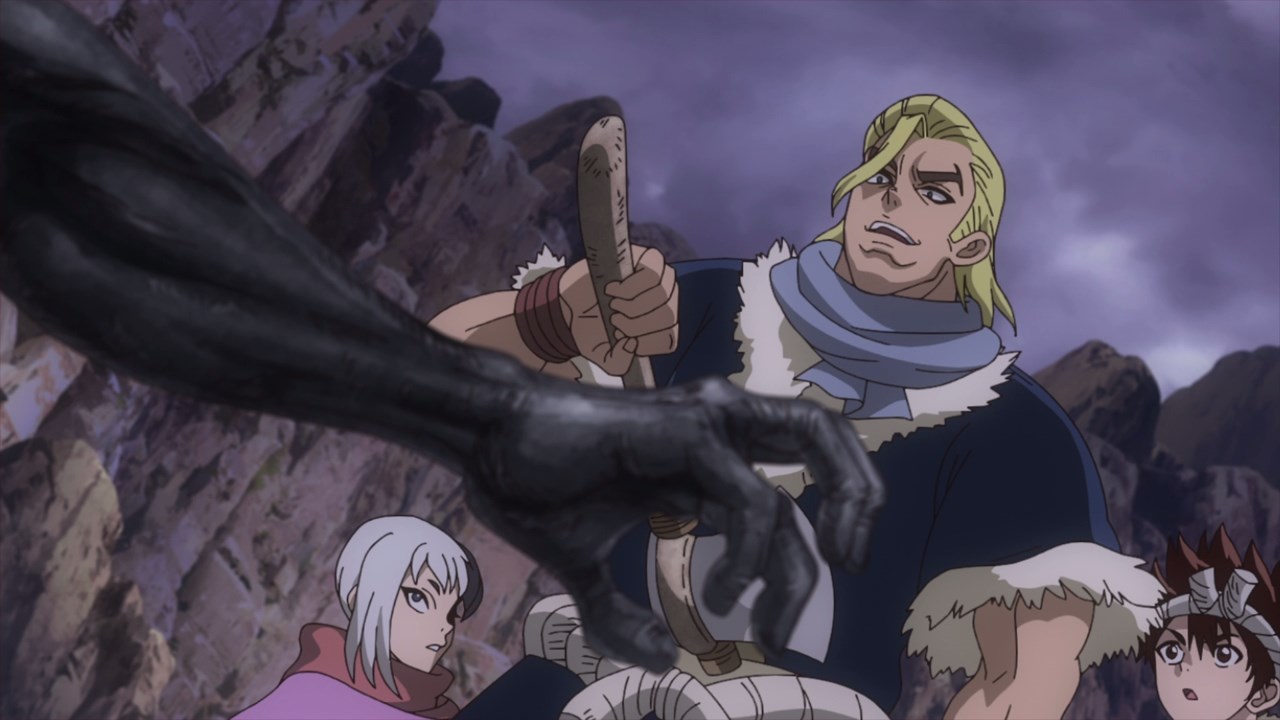 On the other hand, here’s Magma where he’s gonna wreck them with his trusty axe. You sure want to solve problems with violence huh? 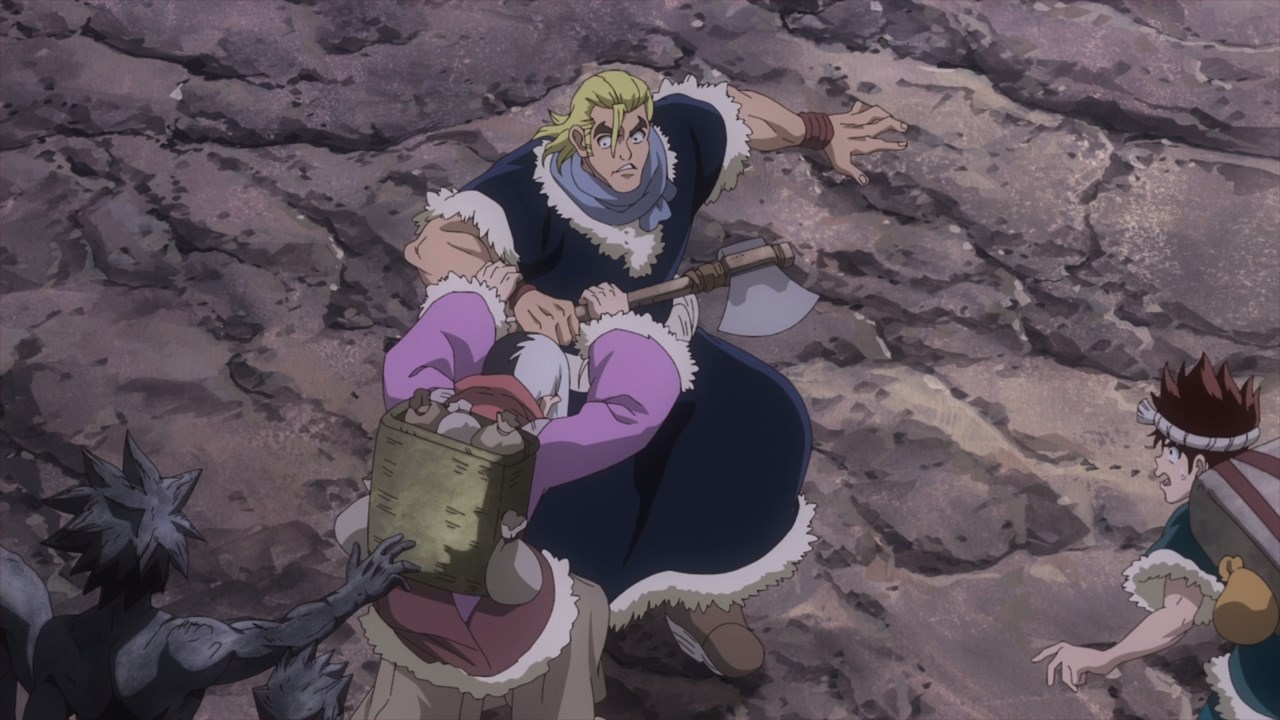 Fortunately, Gen Asagiri stopped Magma because not all of these petrified people are evil. It’s just that they’re being misguided.

Well then, I think it’s time to install the cellphone without being detected. 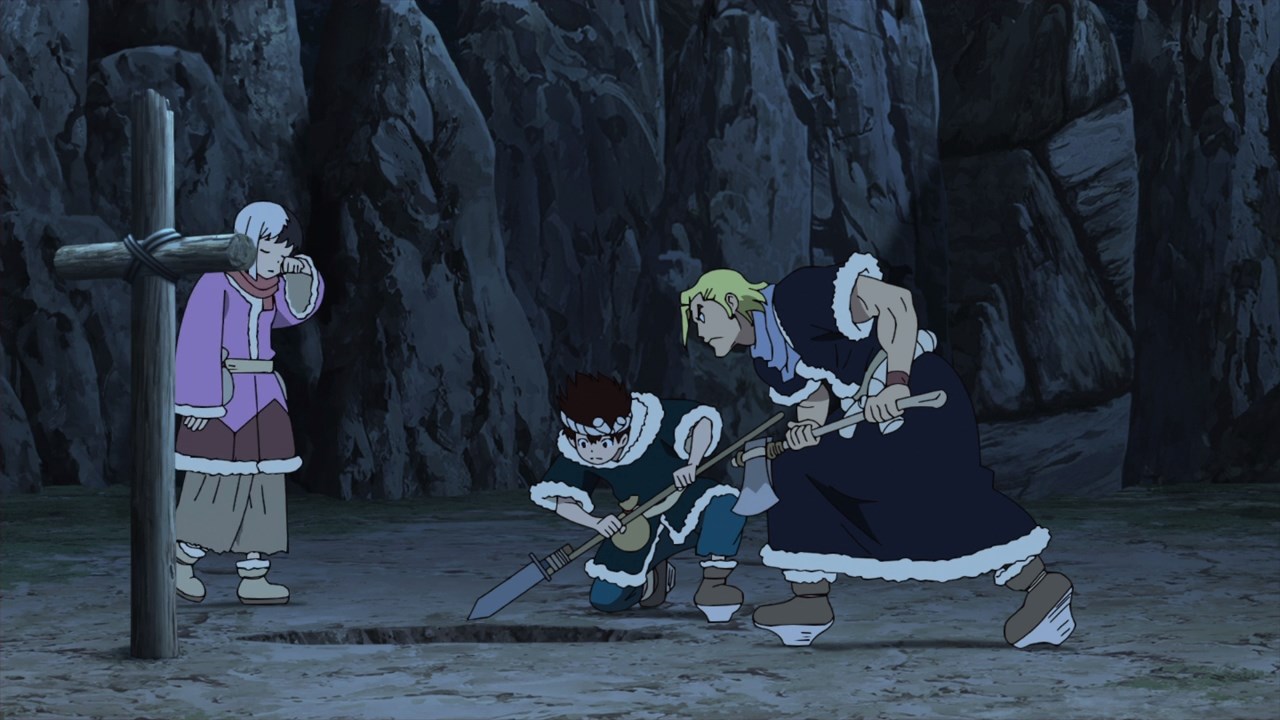 Oh, and they’re gonna put it beneath Senku’s fake grave ’cause why not. Okay, the reason why this grave exists is because it puts Tsukasa Shishio at ease since he killed Senku in earlier episodes, but that’s not the case anymore since the young genius is alive.

Of course, this grave serves at a meeting place for two important characters which I’ll get to them later. 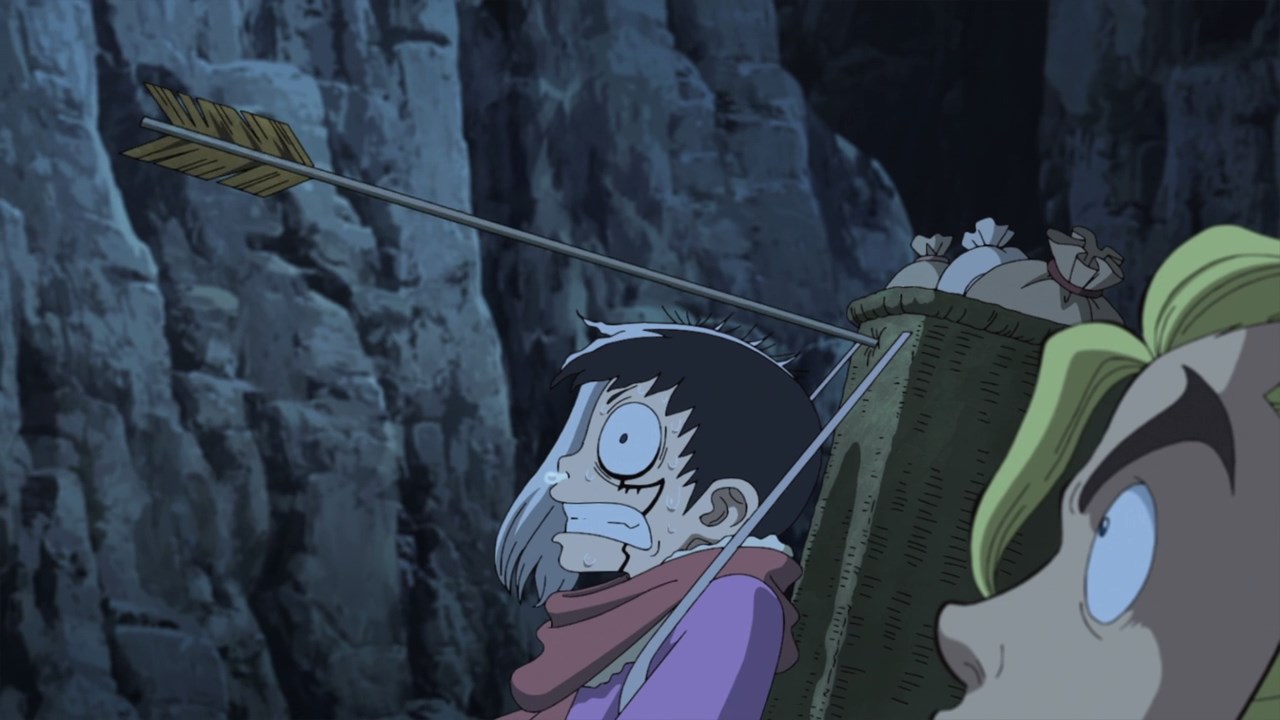 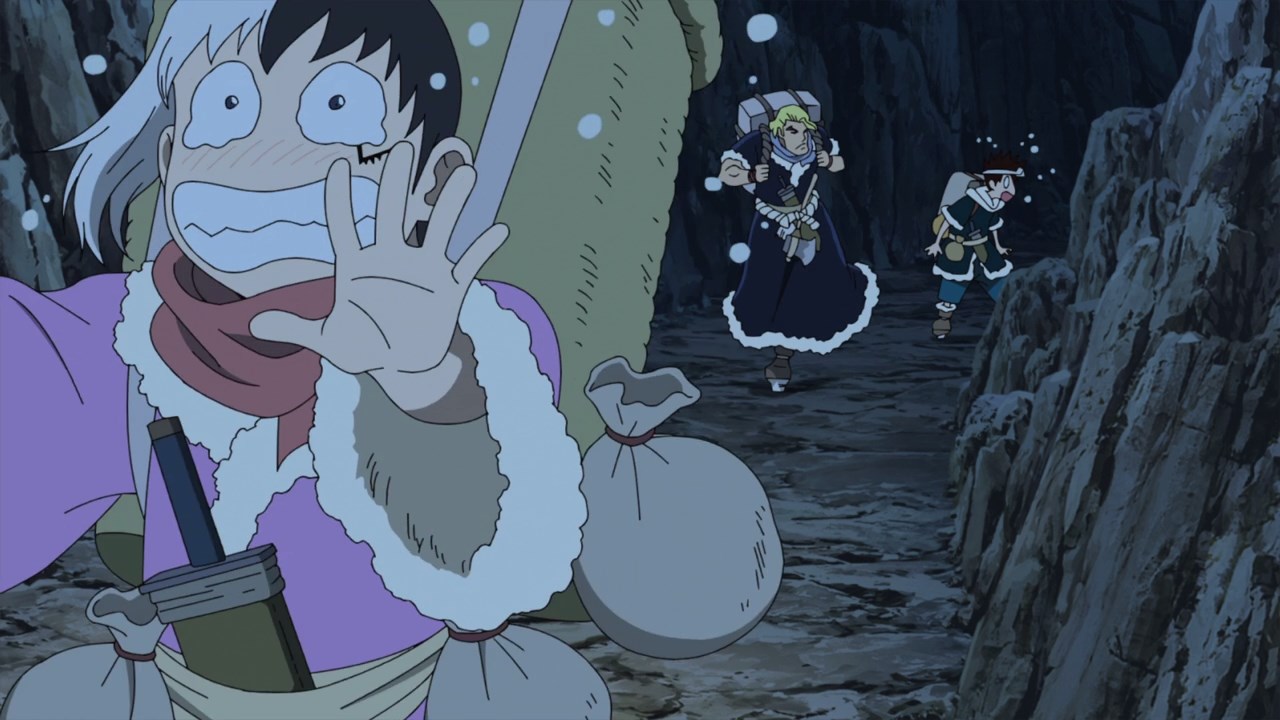 Anyways, looks like the trio managed to bury the cellphone at Senku’s grave, but it appears that Chrome and the rest are in trouble because someone found them. 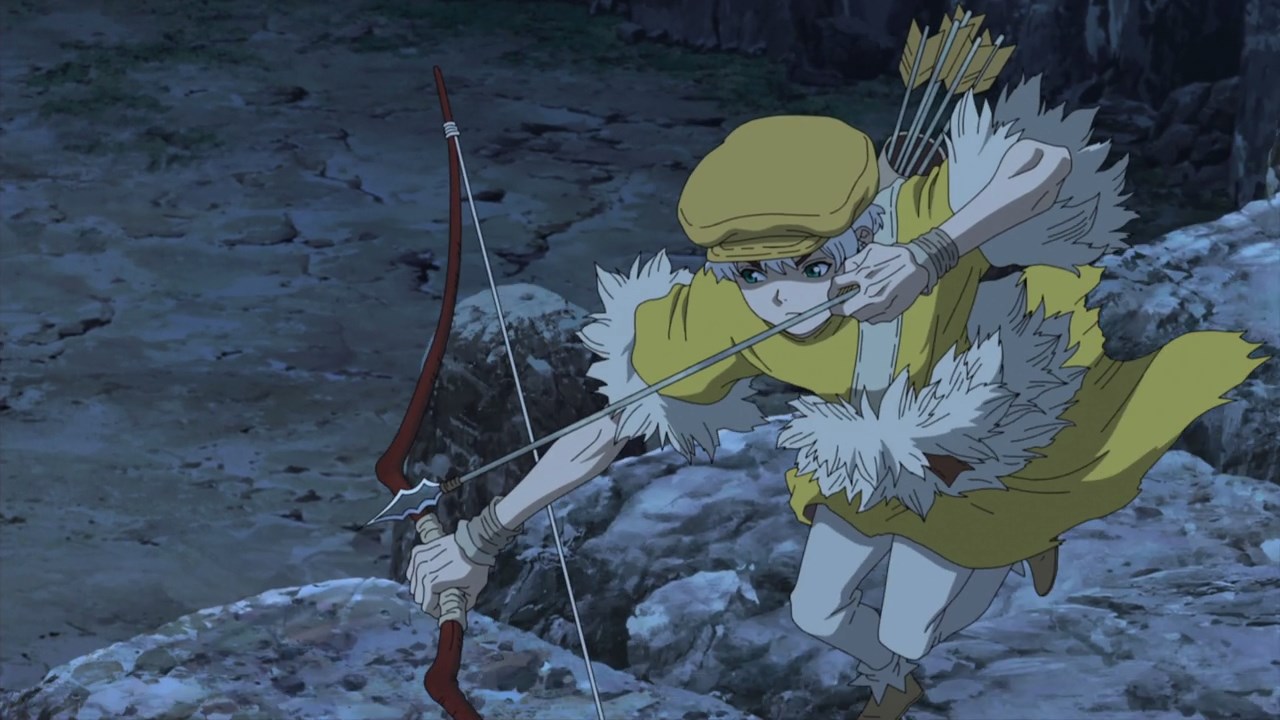 Turns out that this archer named Ukyo Saionji found Chrome’s team simply by hearing their footsteps. Yeah, that guy’s ears are pretty sensitive.

Fortunately, the trio got away but I’m worried about Ukyo Saionji since he might found the cellphone underneath Senku’s fake grave. 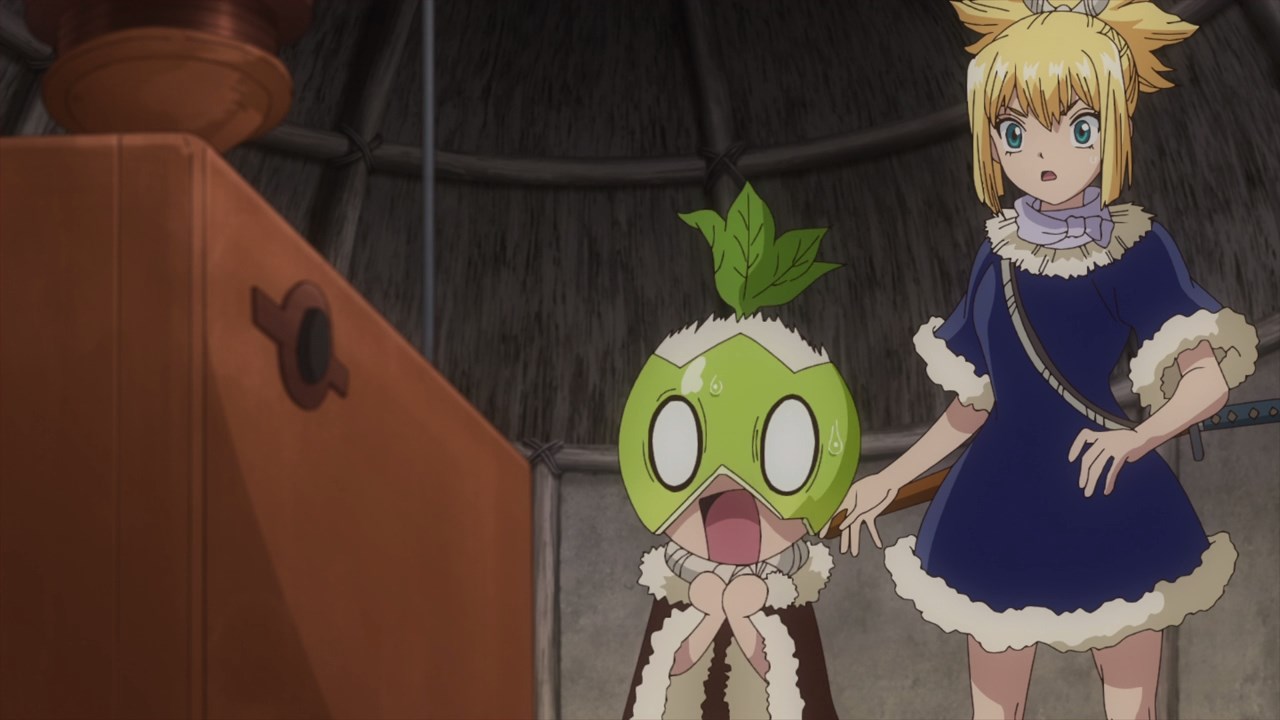 And now, the moment of truth where the cellphone rang at Ishigami Village. And really, this is the first time that a long-distance call is made in the stone world.

However, I’m still worried that someone from Tsukasa Shishio’s empire might find the cellphone and break it. But anyways, who pick up the phone? 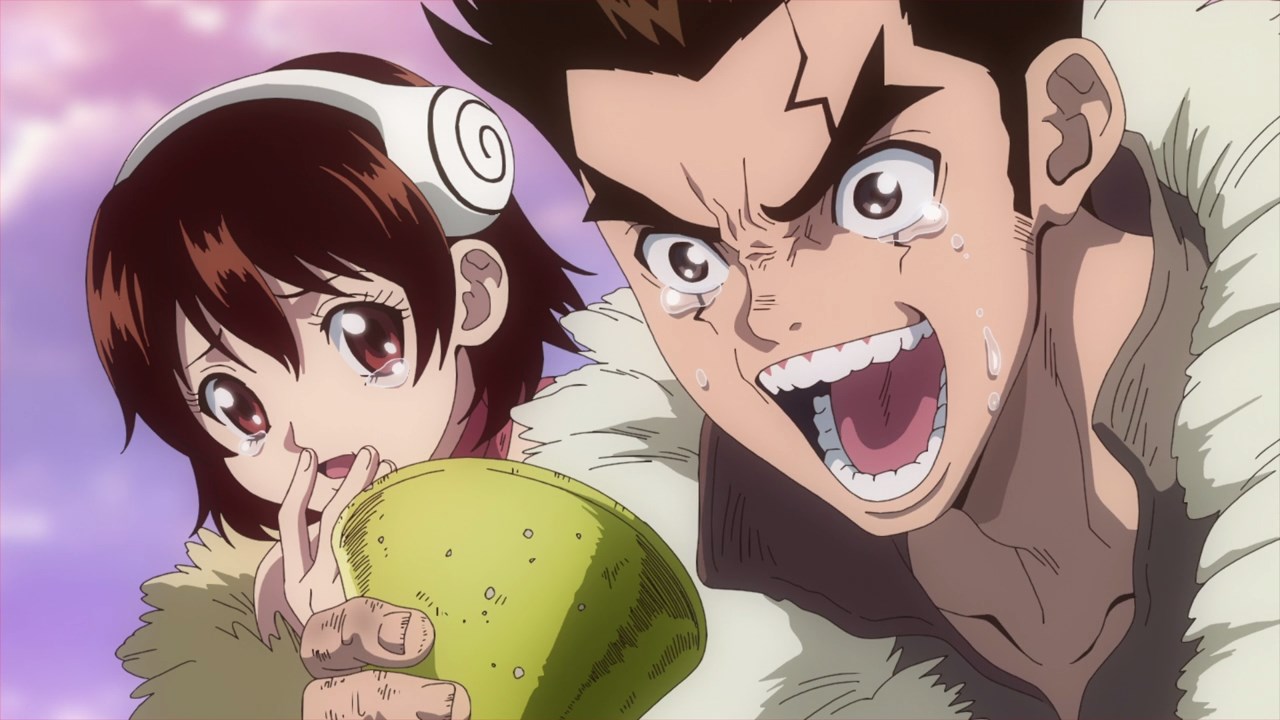 Oh, it’s none other than Taiju Ooki and Yuzuriha Ogawa where they finally called Senku after being separated for a long time. 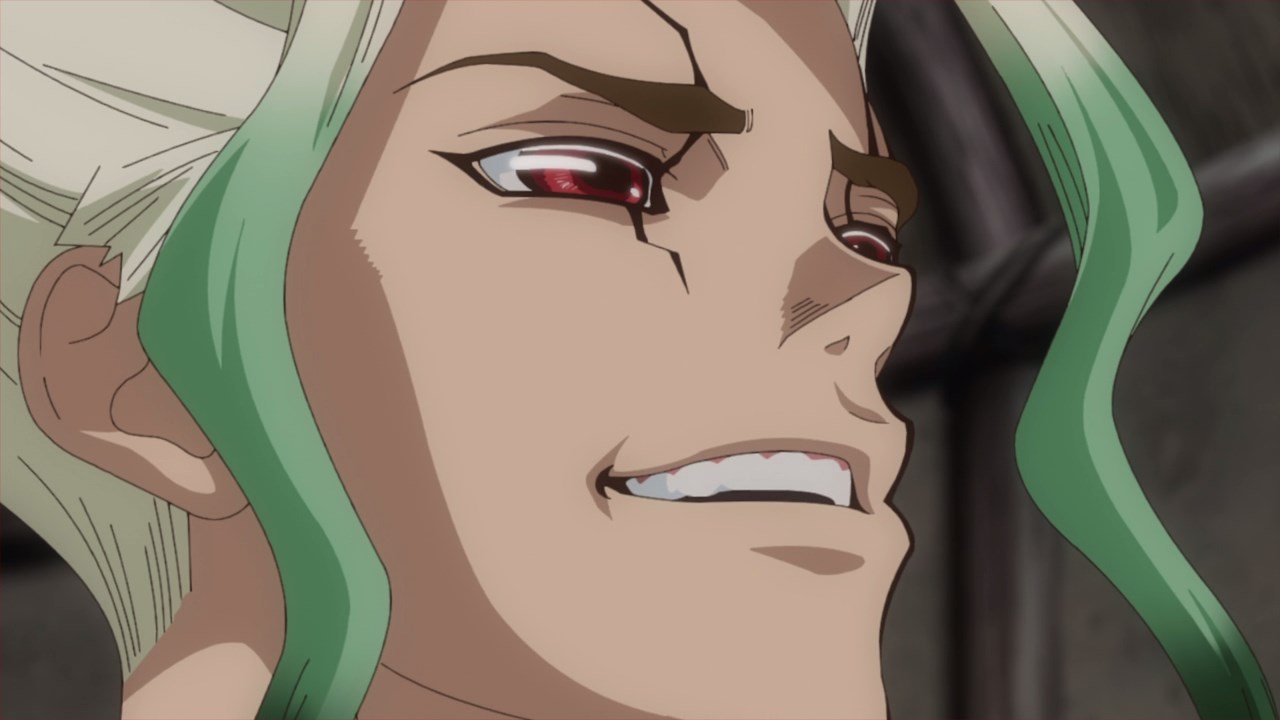 But as for Senku, he’s really happy that Taiju and Yuzuriha are alive. Man, he really miss those two!

Now then, I’m hoping that the cellphone will remain undetected from Tsukasa Shishio and his men ’cause that would play a role in winning the stone war. With that said, I’ll see you next time!