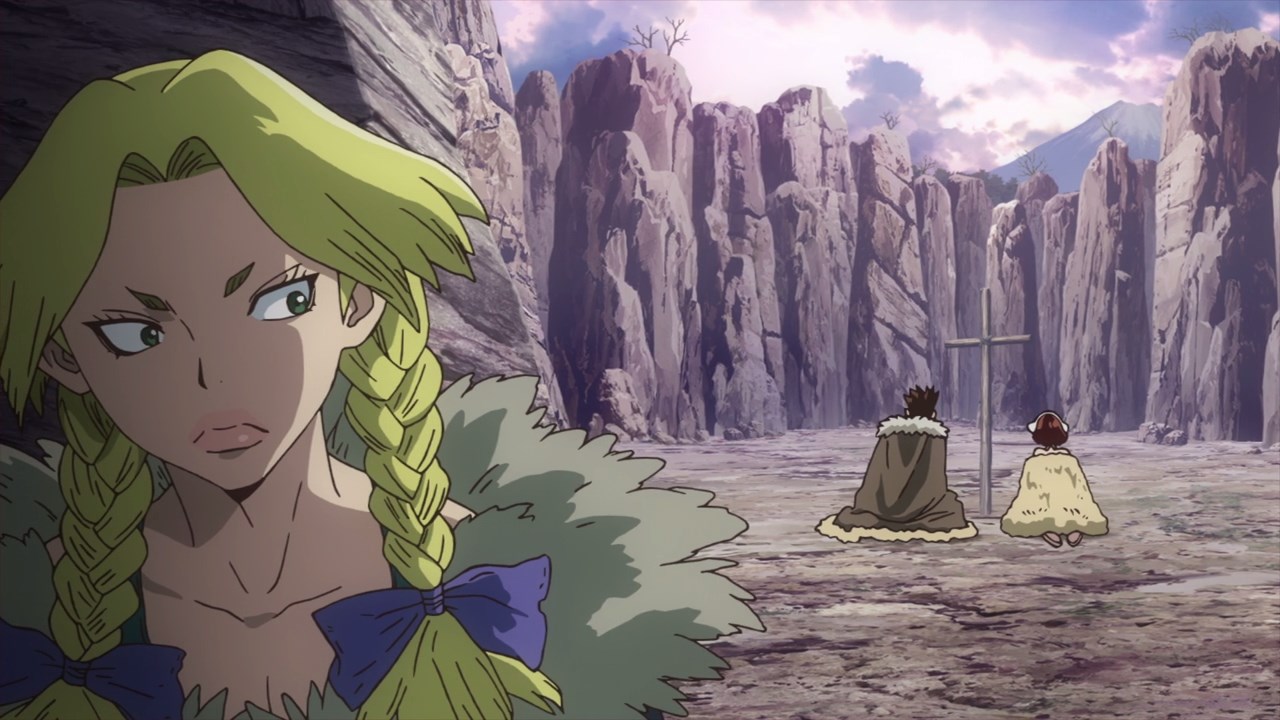 Well, we got some bad news at the start of this episode as Taiju Ooki and Yuzuriha Ogawa is being watched by Niki Hanada, a judoka where she’s being tasked on guarding both of them.

Man, I’m worried that their cell phone might be found by one of Tsukasa Shishio’s soldiers. 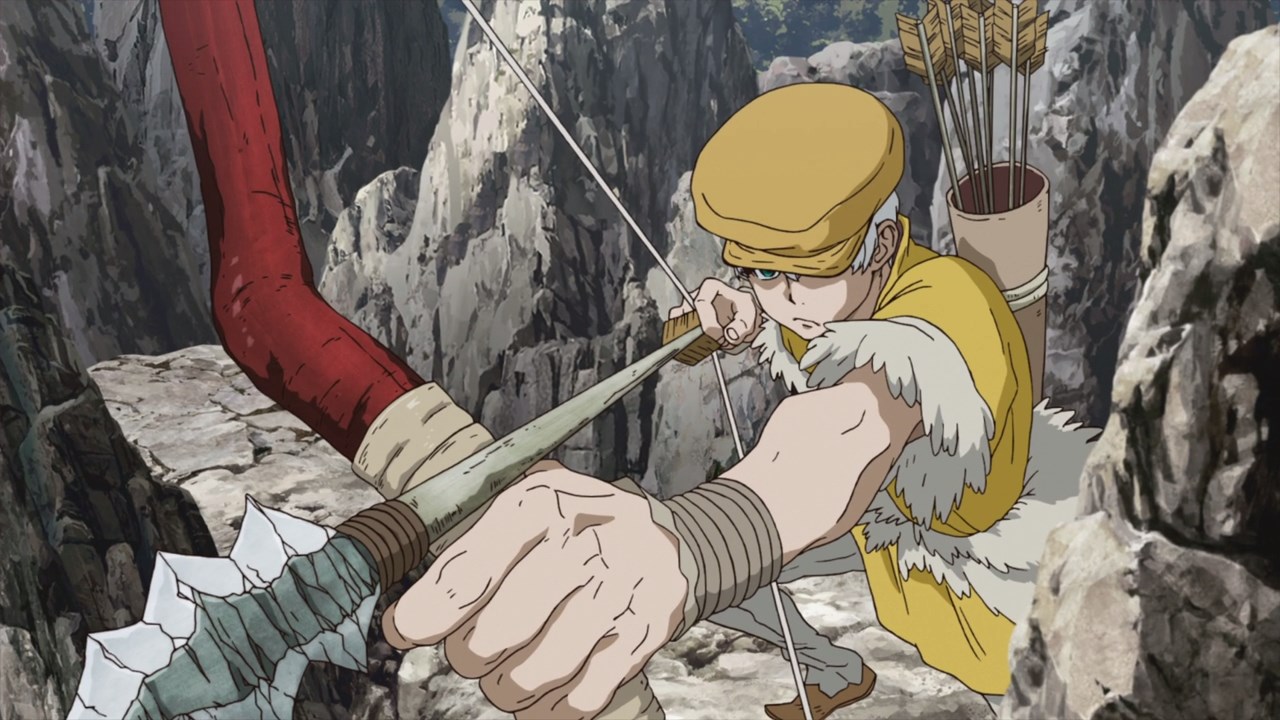 Meanwhile, Chrome and his team are stuck between a rock and a hard place as Ukyo Saionji is ready to shoot them down. C’mon, he can hear sounds from a mile away. 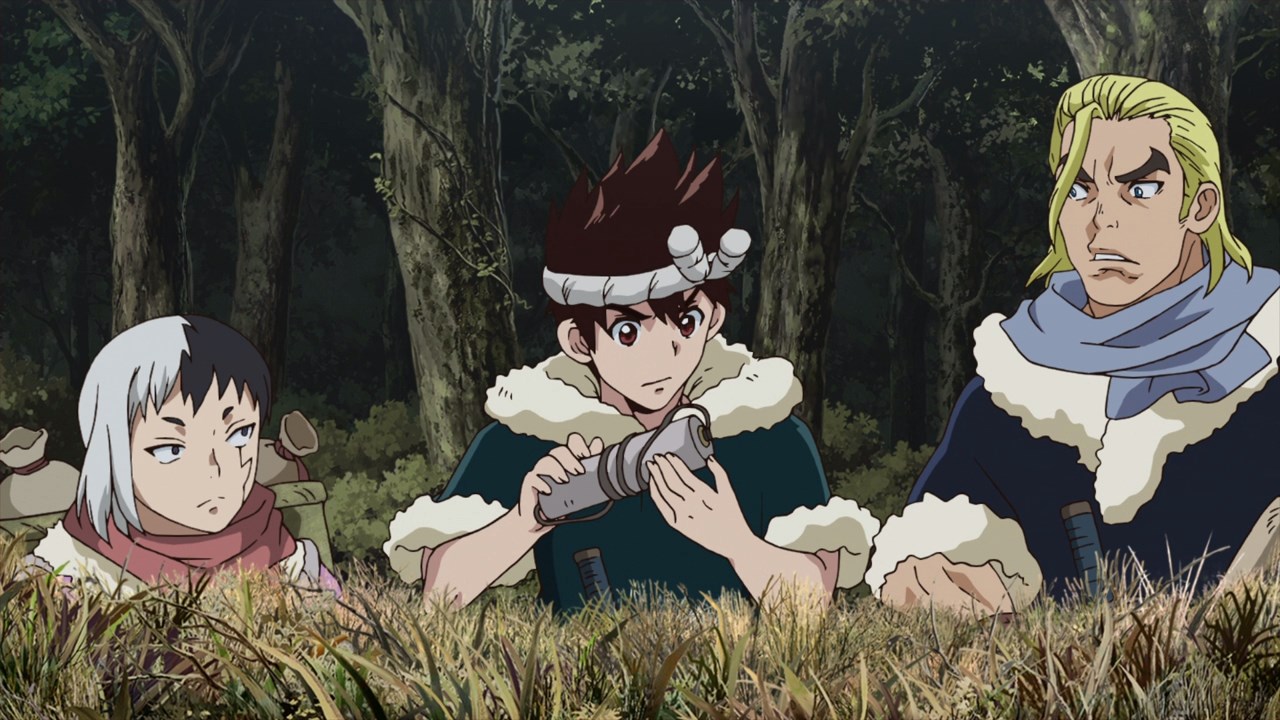 However, Chrome have a plan in which he’ll use a spare battery, which is meant for the cell phone by the way, to be used as a distraction device. How will he do it? 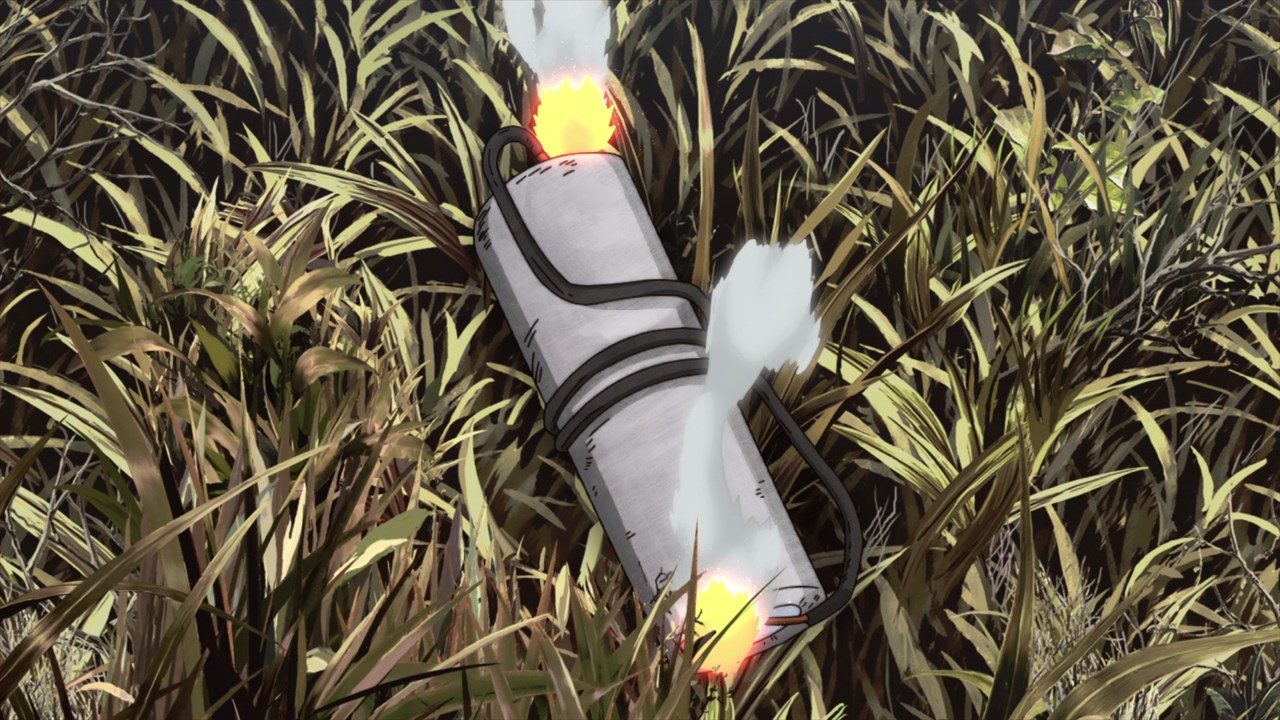 Well, Chrome will have to connect the two ends of the battery with a wire, which in turn generate electricity that’s enough to start a fire. 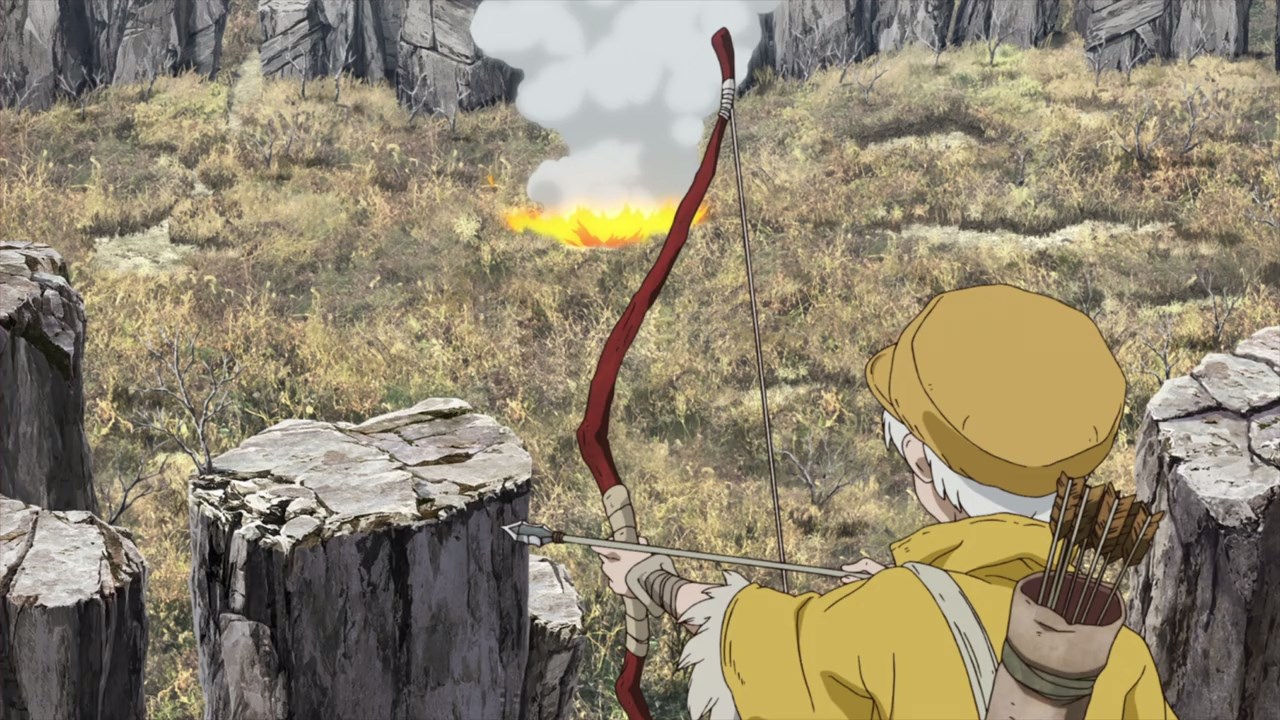 And there goes Chrome’s spare battery as Ukyo Saionji heard a loud explosion and also saw smoke at the bushes. 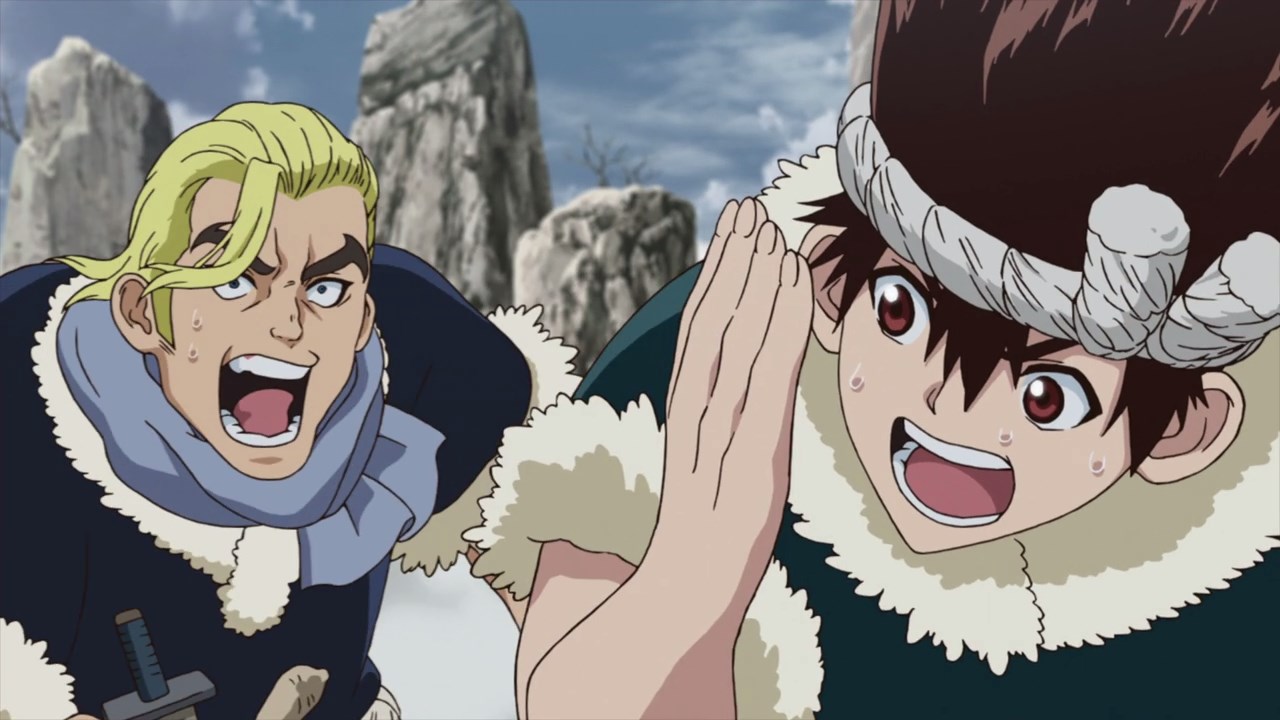 Oh and here’s both Magma and Chrome running away from their lives.

Actually, they’re acting as bait so that Gen Asagiri will make his escape towards Ishigami Village. I hope these two won’t get caught! 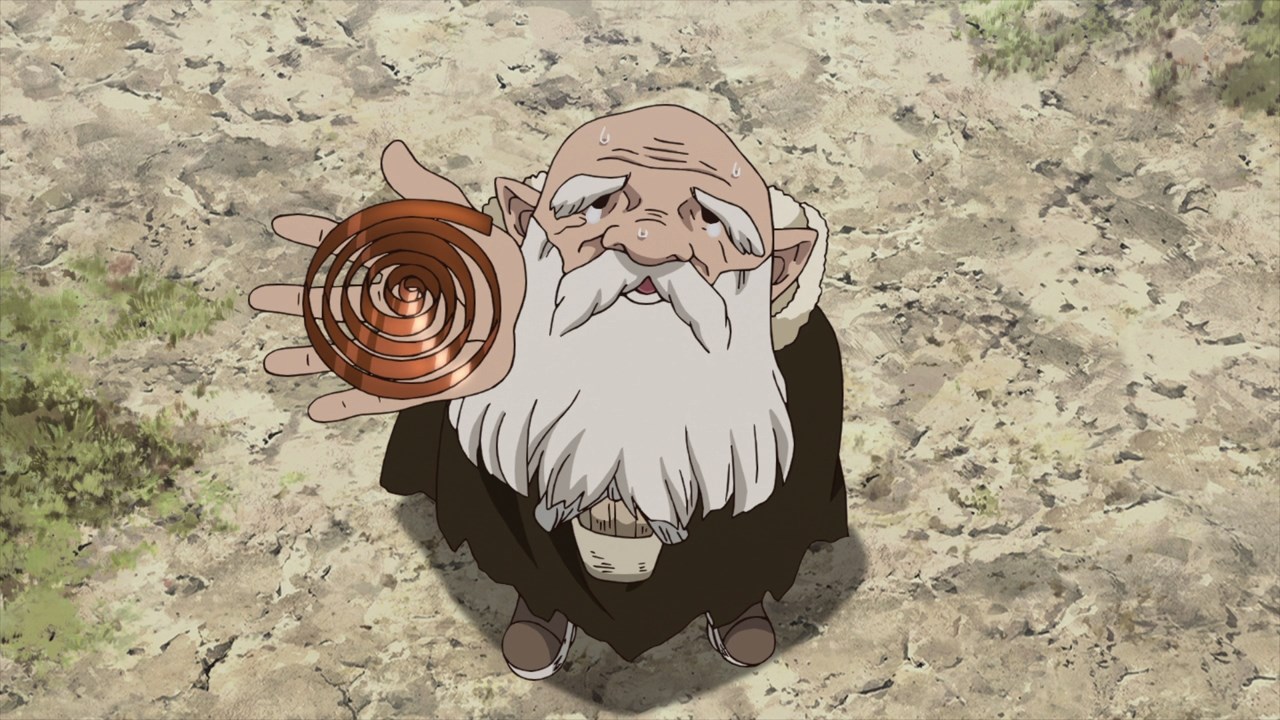 Moving back to Ishigami Village, it appears that Kaseki created a coil spring which he forged it from copper. 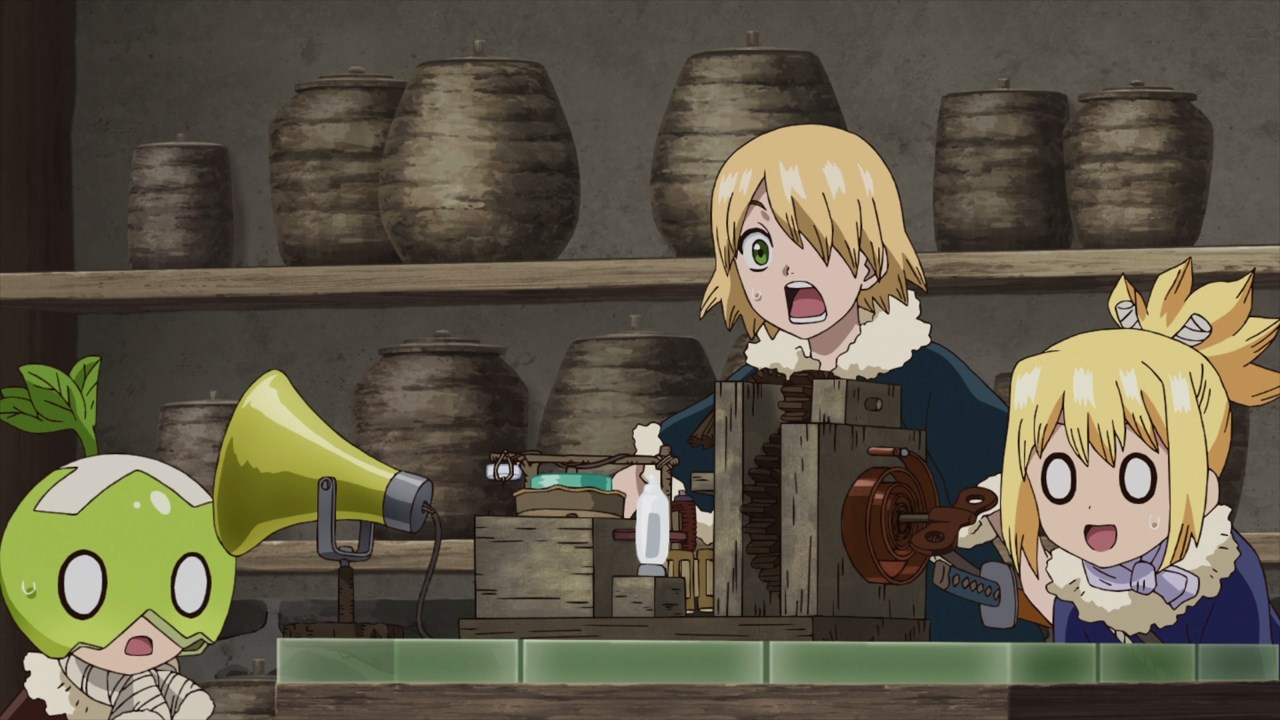 Oh yeah, and having a coil spring is useful for constant motion such as clocks or even a phonograph in which there’s no need for someone like Ginro to spin it. 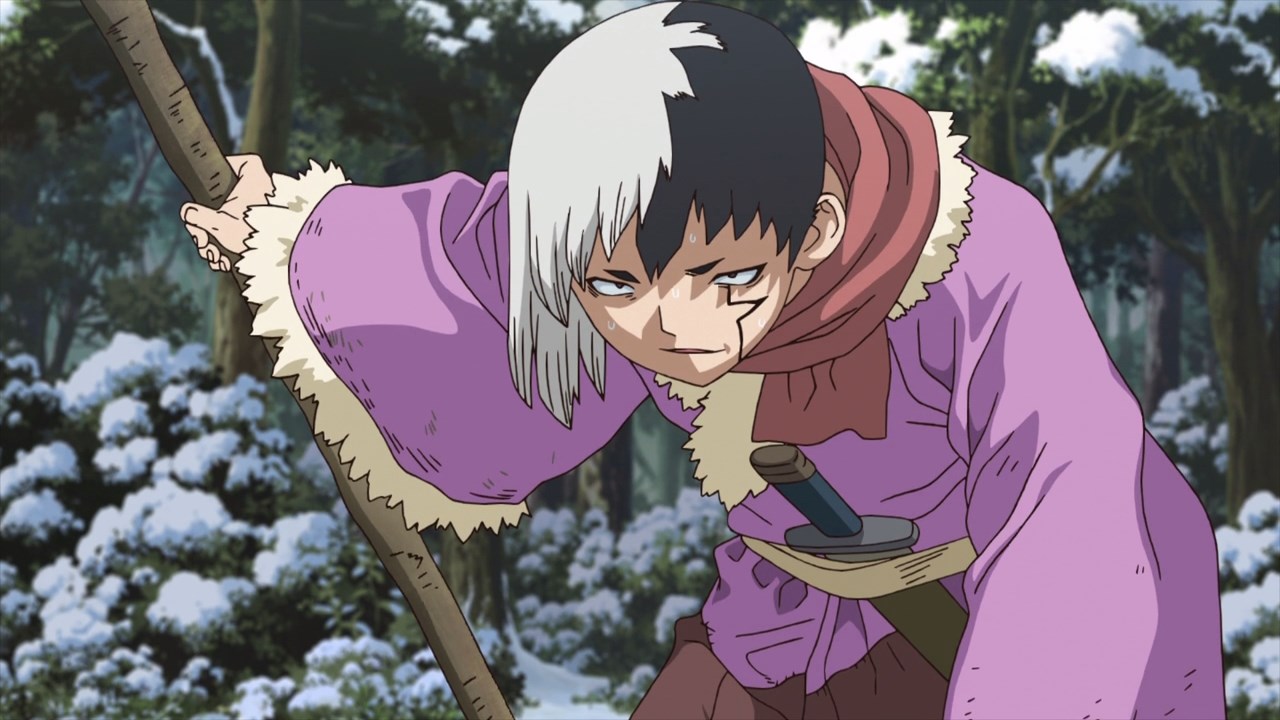 Meanwhile, here’s Gen Asagiri as he’s safely returned to the village for his next mission. Then again, I’m hoping that he won’t use mimicry when convincing someone to join Senku’s side. 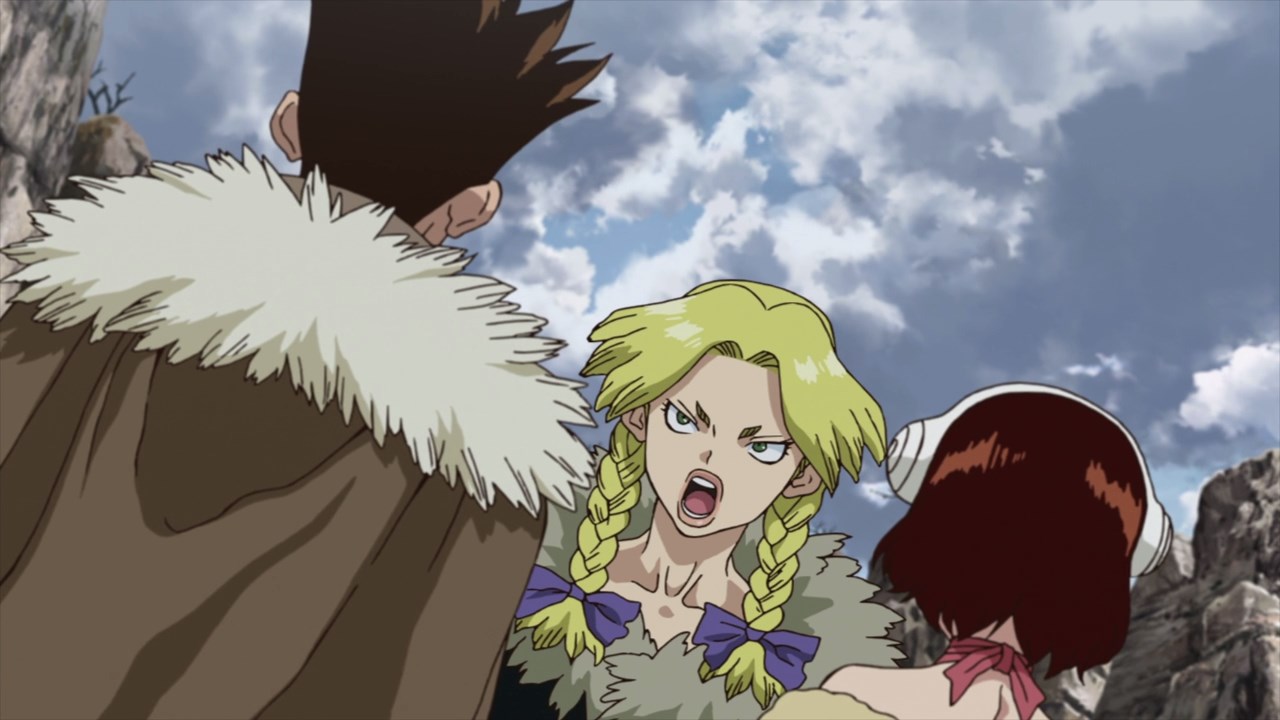 Let’s return to the Empire of Might where Niki “Nikki” Hanada confronted Taiju Ooki and Yuzuriha Ogawa as she doesn’t them interfering Tsukasa Shishio’s plans nor convincing someone to stop the war. 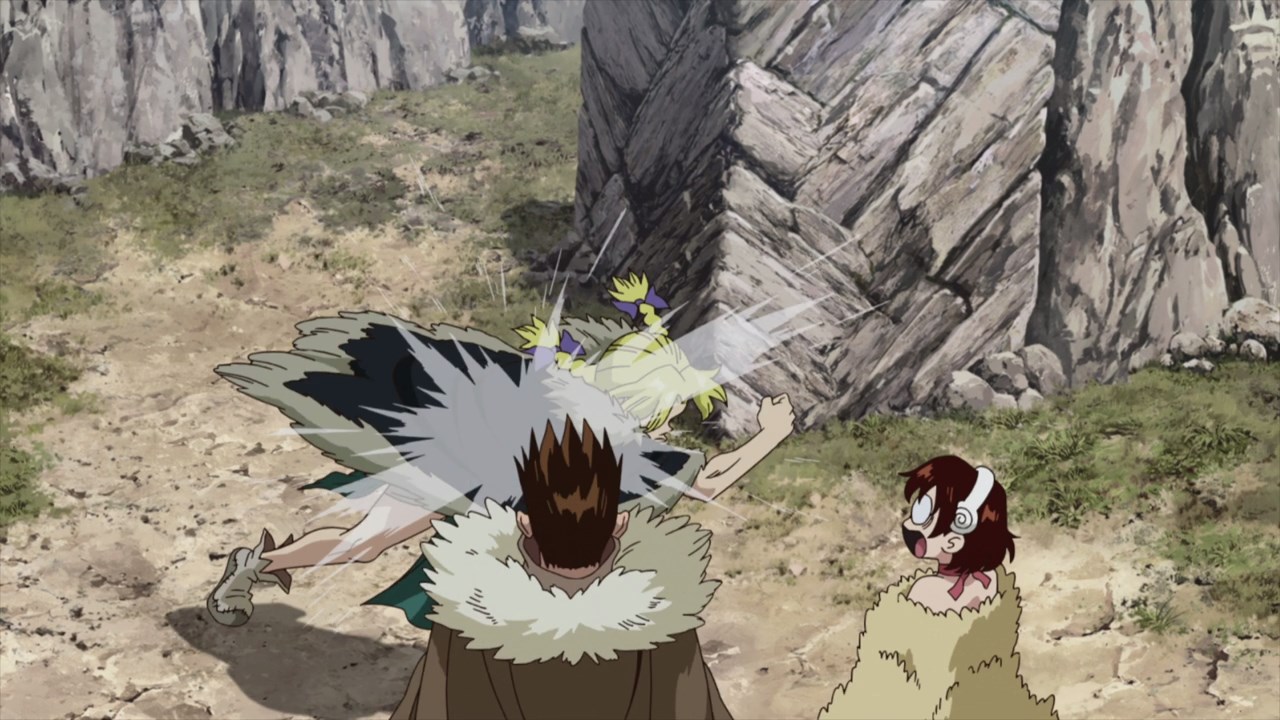 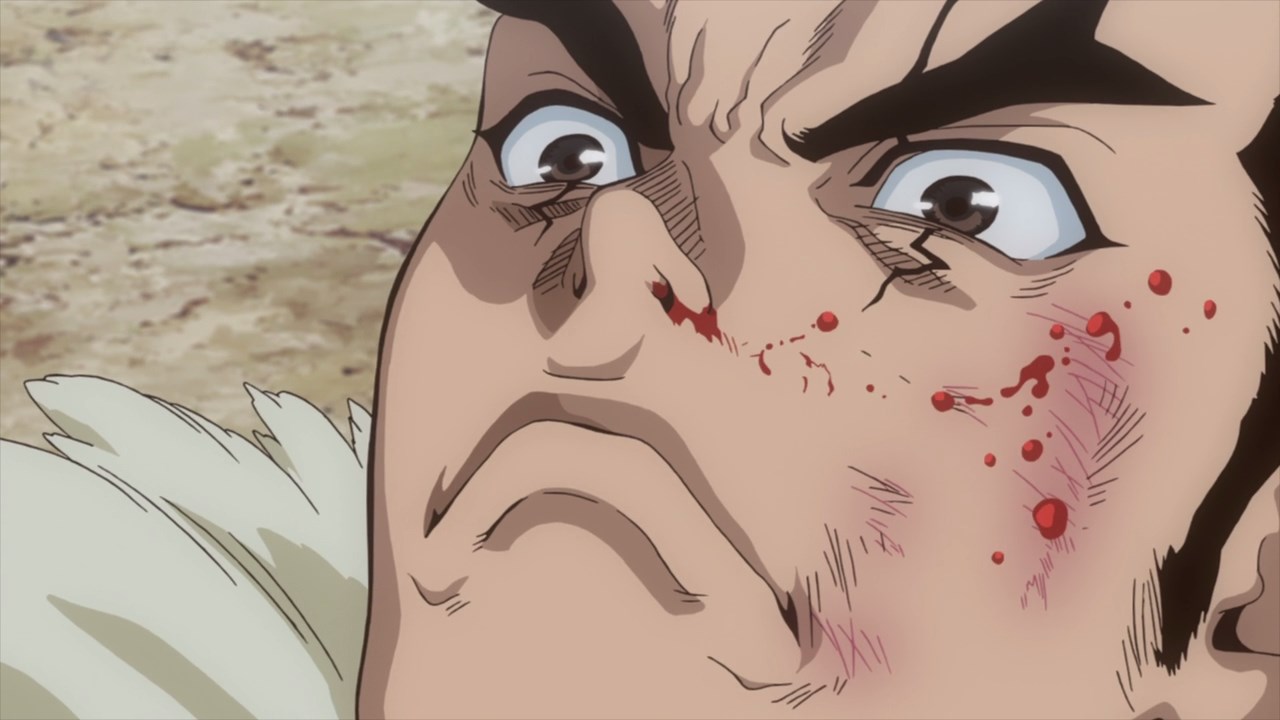 Oh and to set her point straight at them, Nikki punched Taiju to the face, although this big oaf only got a minor scratch as he’s one tough guy. Ugh, this girl is bad new for both Taiju and Yuzuriha. 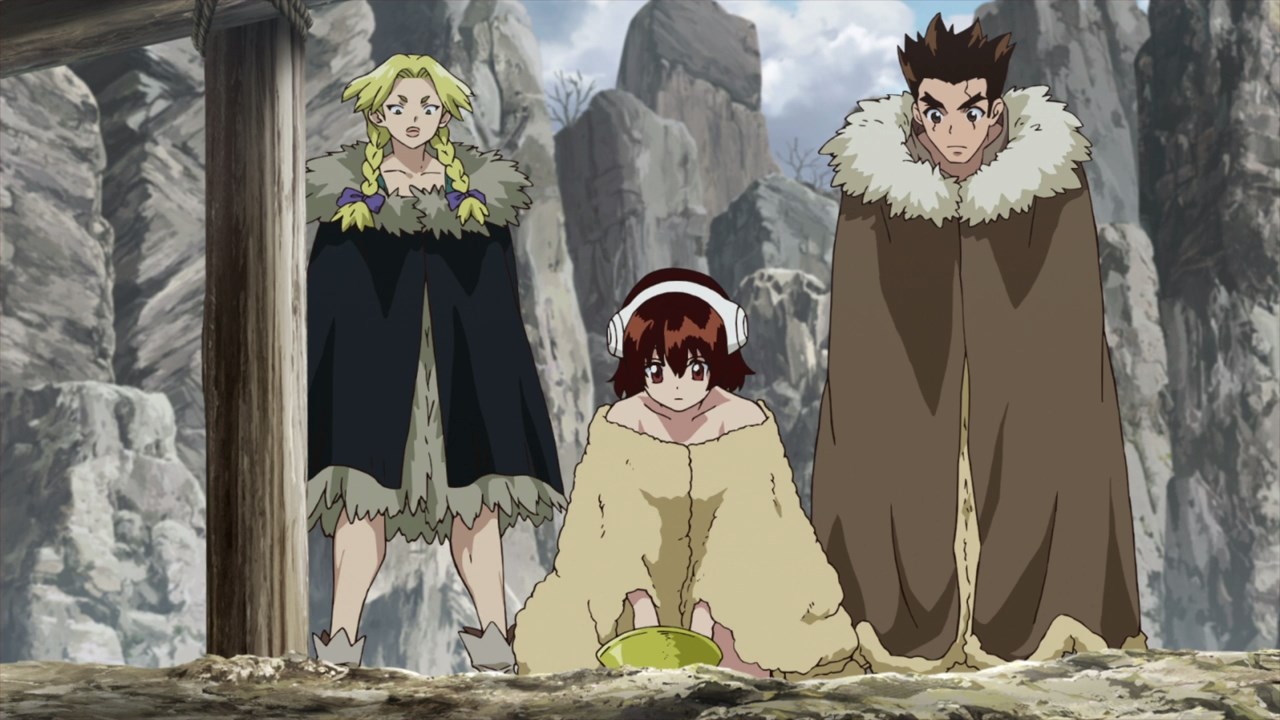 Speaking of Yuzuriha, it appears that she decides to show the cell phone to Nikki, which is the worst decision that she made as Senku’s plan will eventually fail.

Then again, Senku decides to show his cards anyway as he wants to convince a member of Tsukasa’s army. 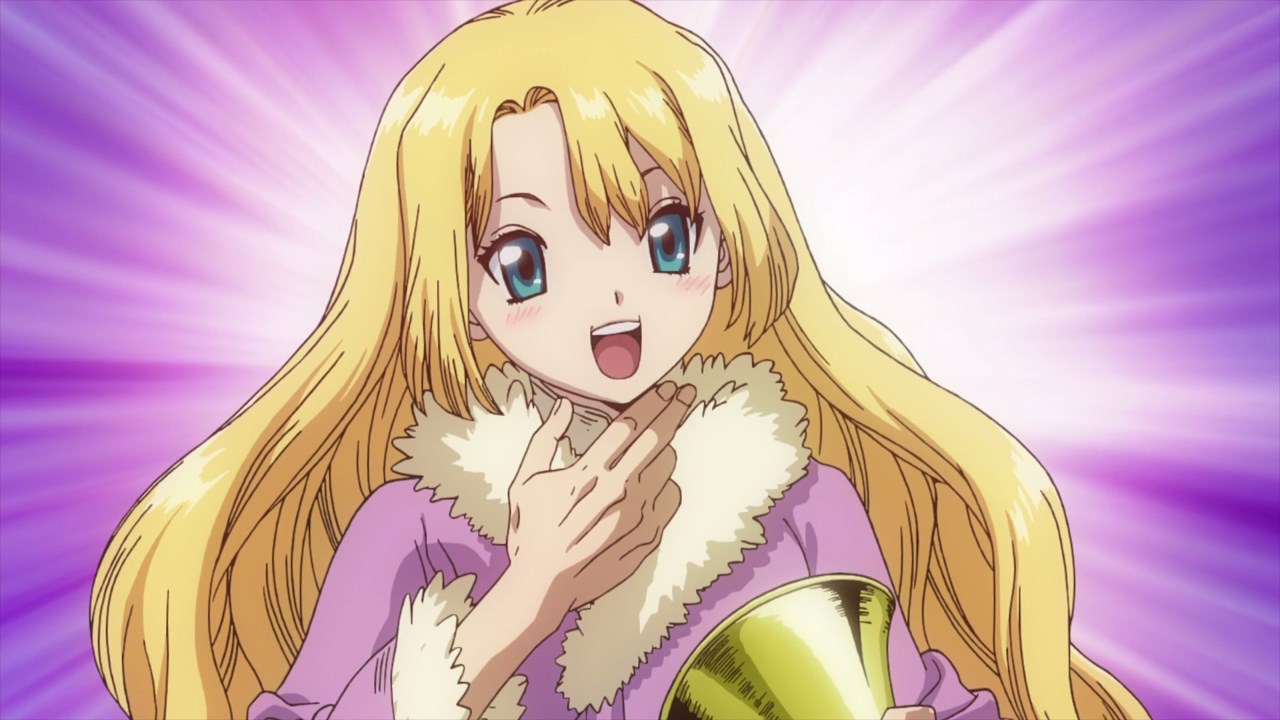 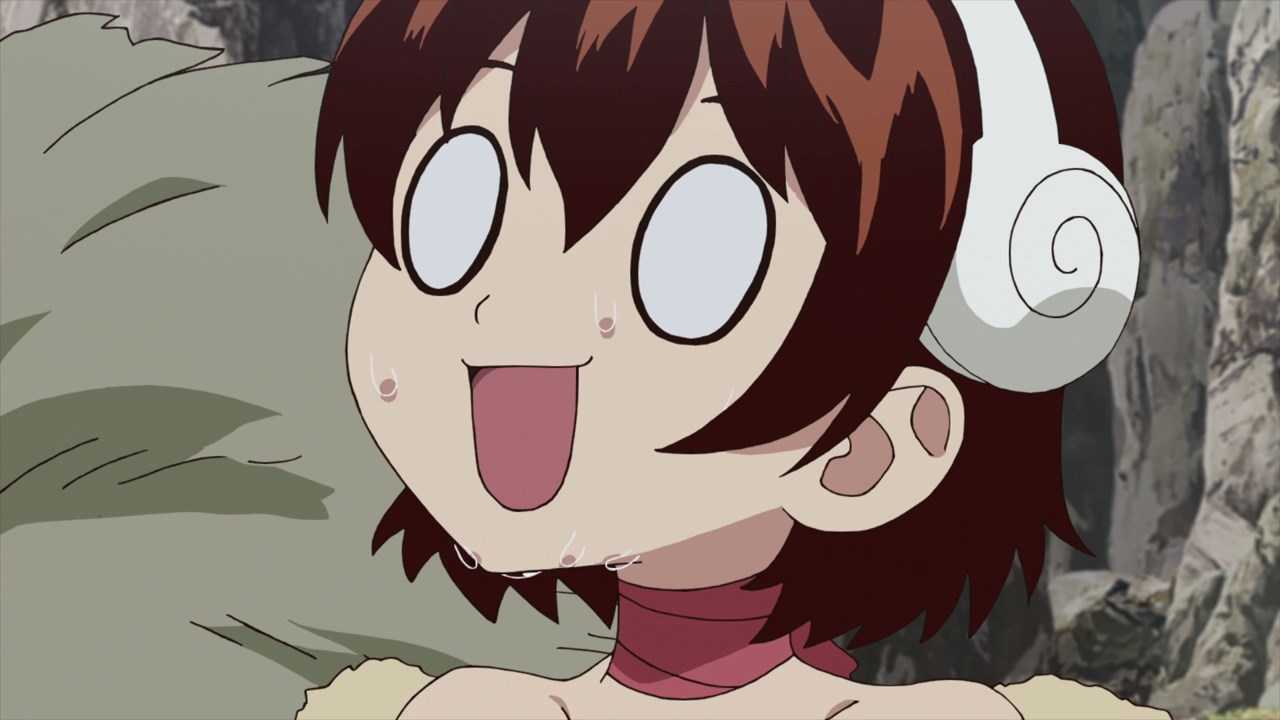 Even Yuzuriha is worried that Senku might get exposed due to Gen’s botched attempt of mimicking Lilian’s voice. 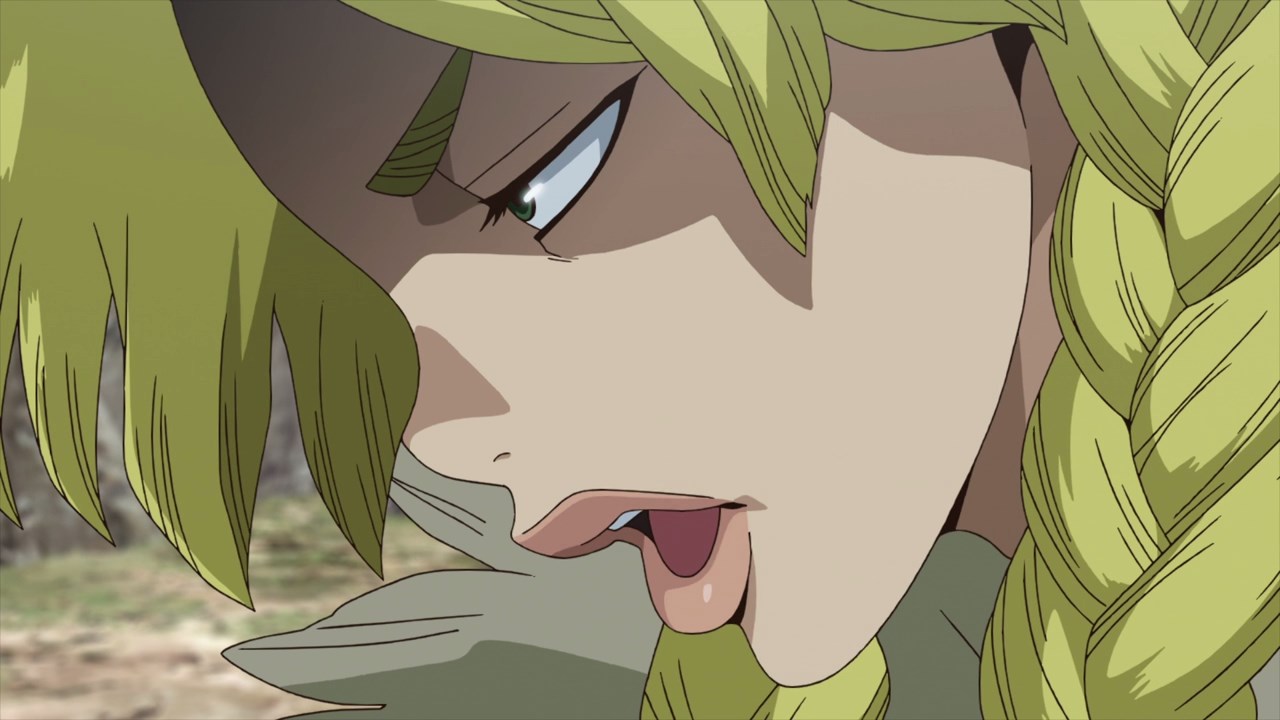 On the other hand, it appears that Niki Hanada has doubts on whether she’s actually hearing Lilian Weinberg’s voice or not. Wait a minute, could it be that Nikki is a super fan? 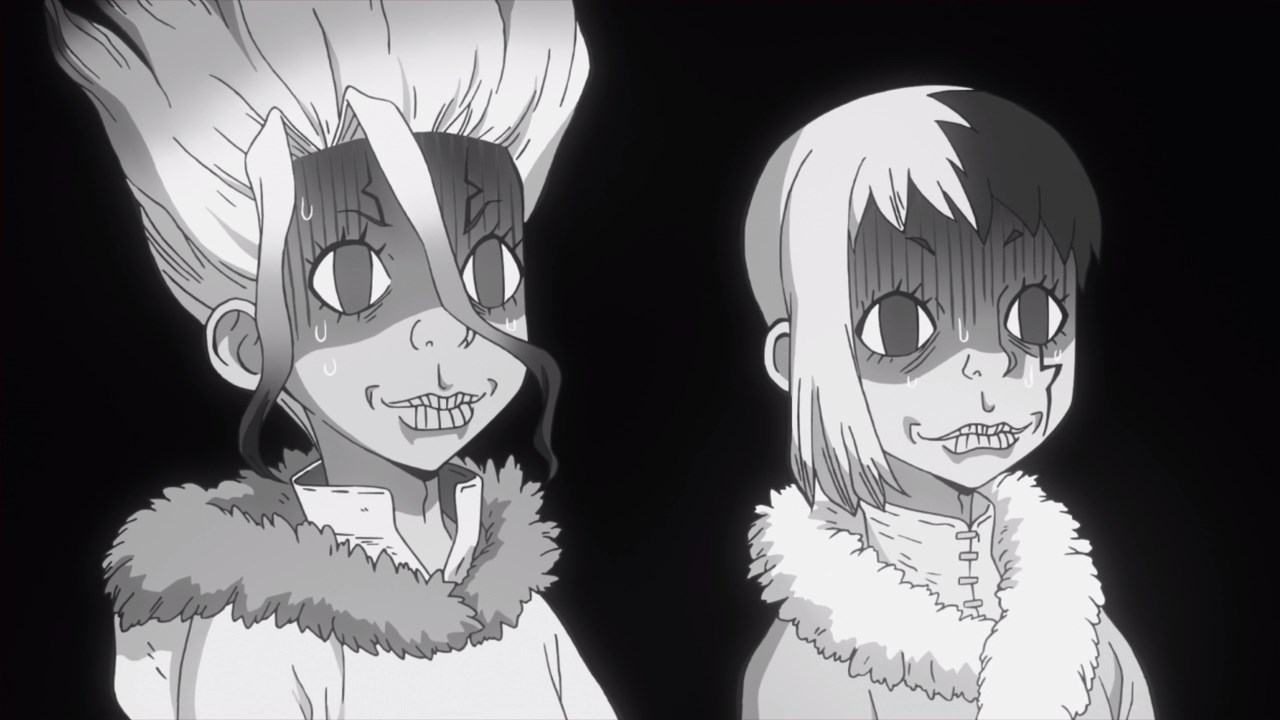 Hell, even Senku and Gen are surprised that someone is a big fan of Lilian Weinberg. Well, looks like they’re completely fucked-up! 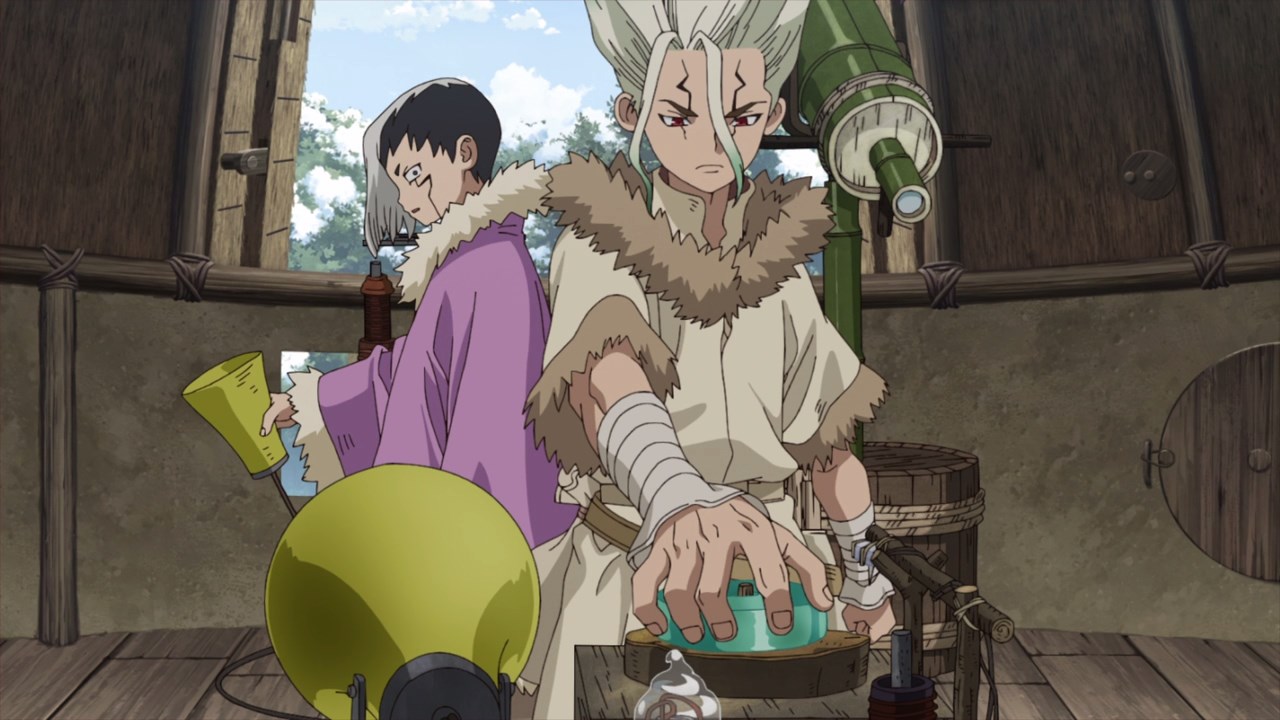 That’s until Senku decides to use his trump card which is Lilian Weinberg’s song. Then again, I have doubts on whether this record would work as it sounded grainy. 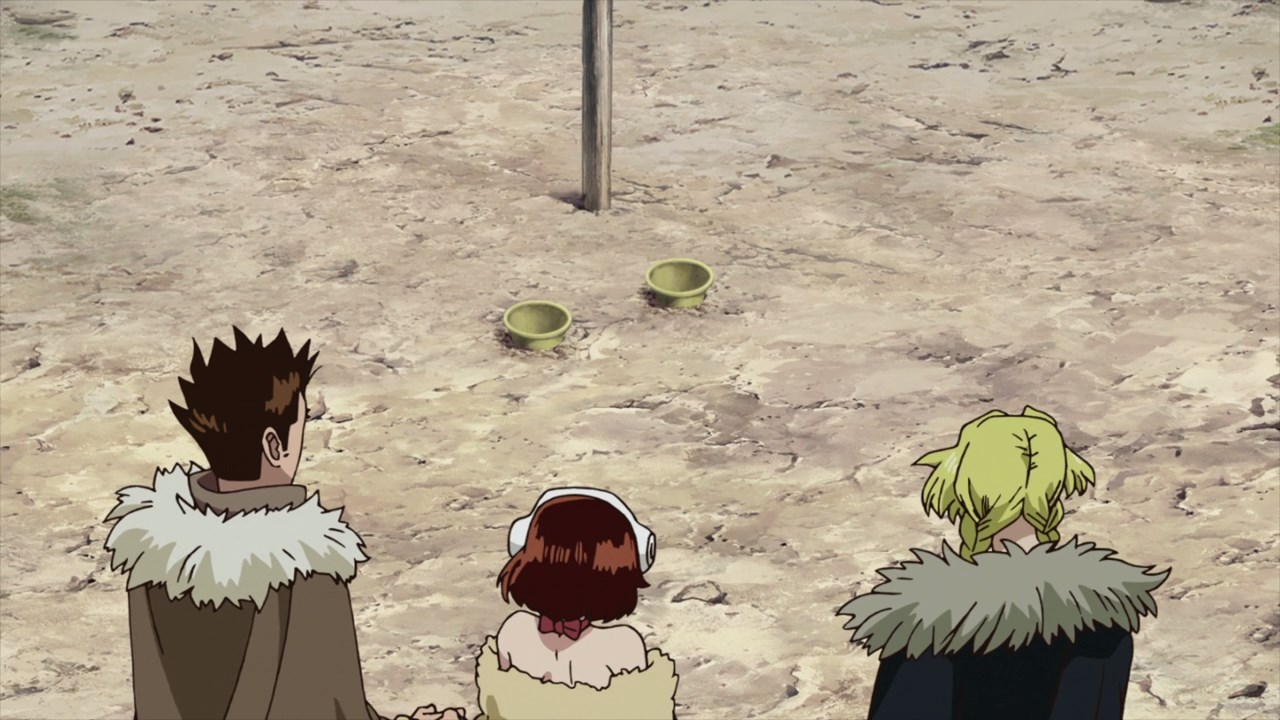 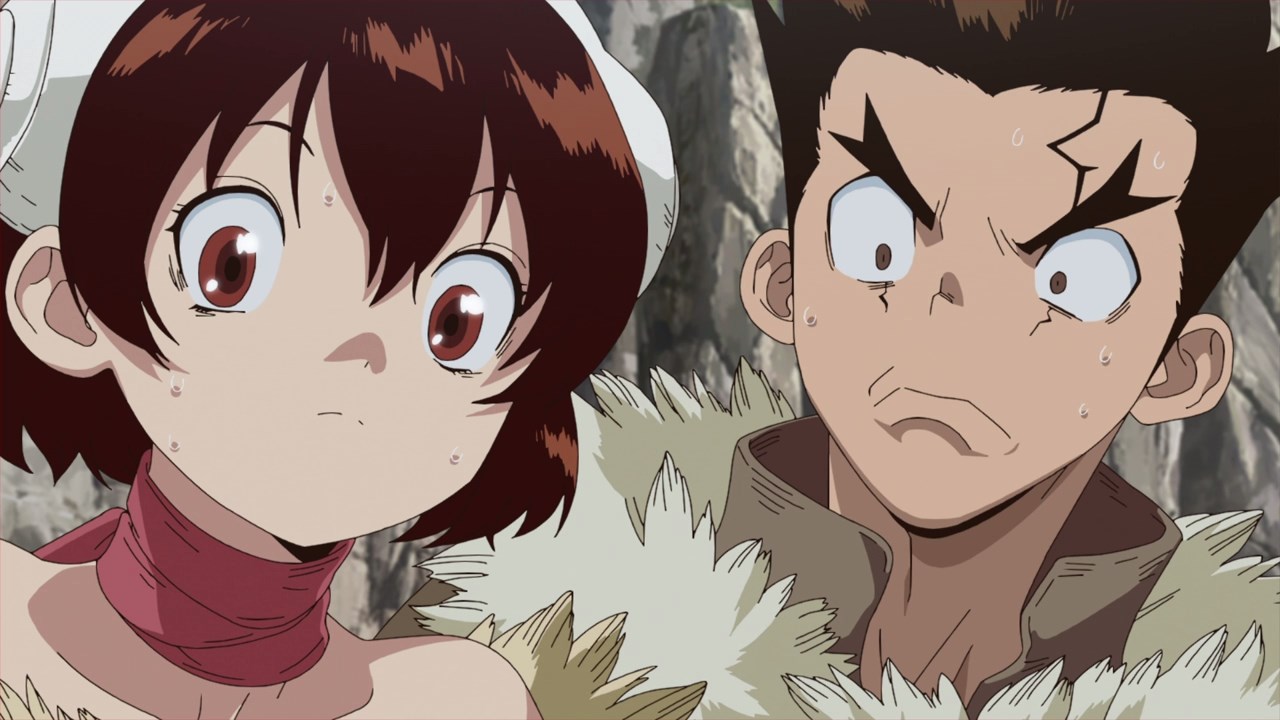 With that said, Senku rolled the dice as he played the record and transmitted it via the cell phone. Even Yuzuriha and Taiju couldn’t believe that they’re hearing music in the stone world! 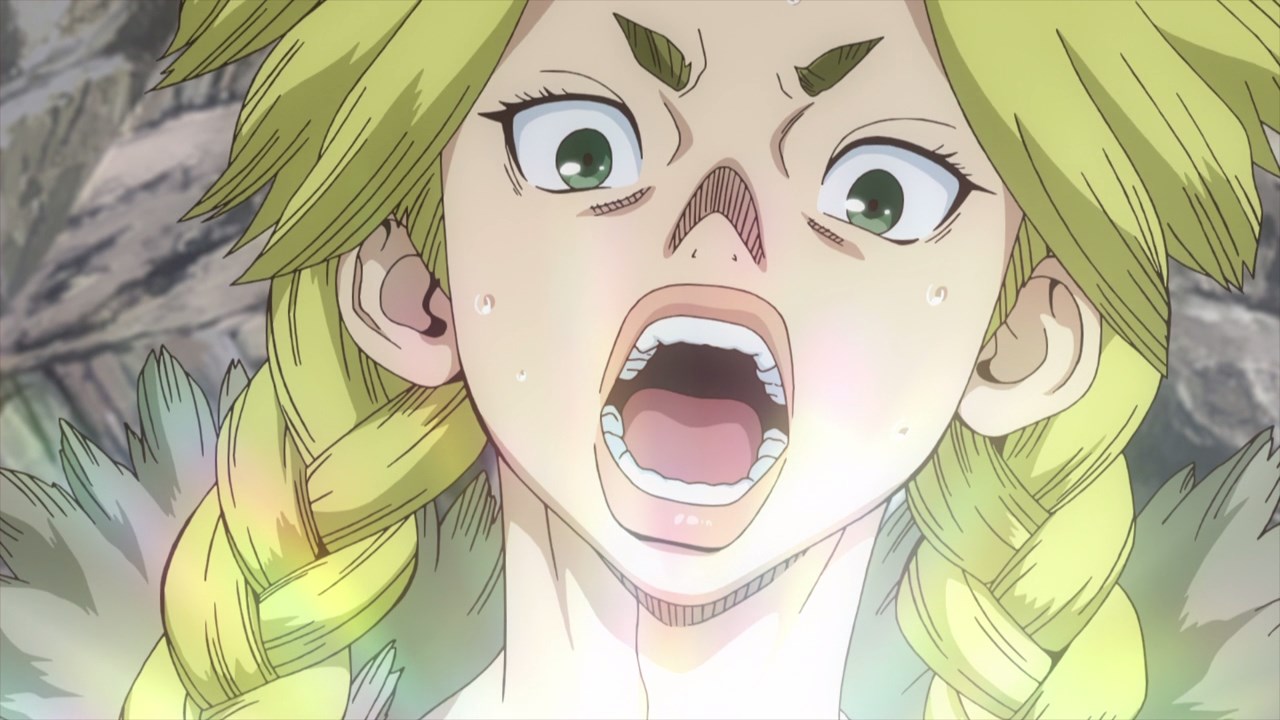 But for Nikki however, it appears that she’s actually hearing Lilian’s song despite its quality. C’mon, it was recorded from a makeshift recorder many years ago. 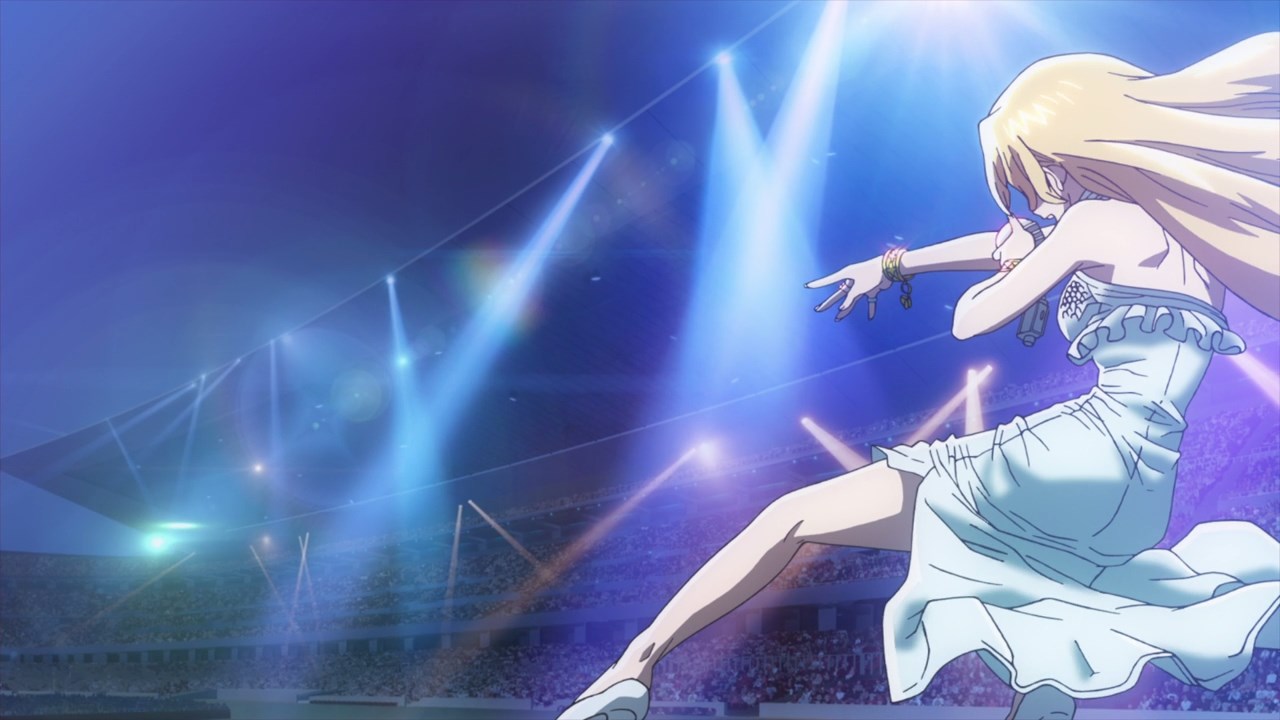 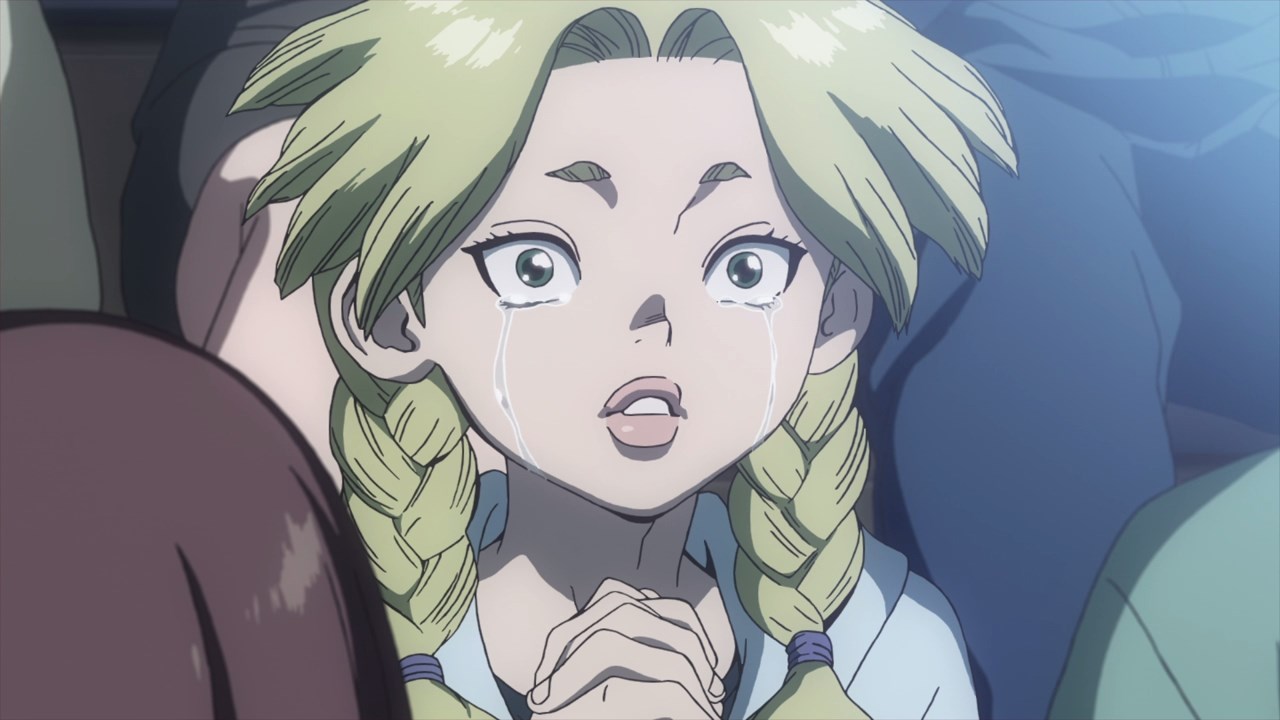 In any case, it looks like Niki Hanada finally heard Lilian Weinberg’s singing voice for a very long time as she remembered those days when Nikki attended the diva’s concert. 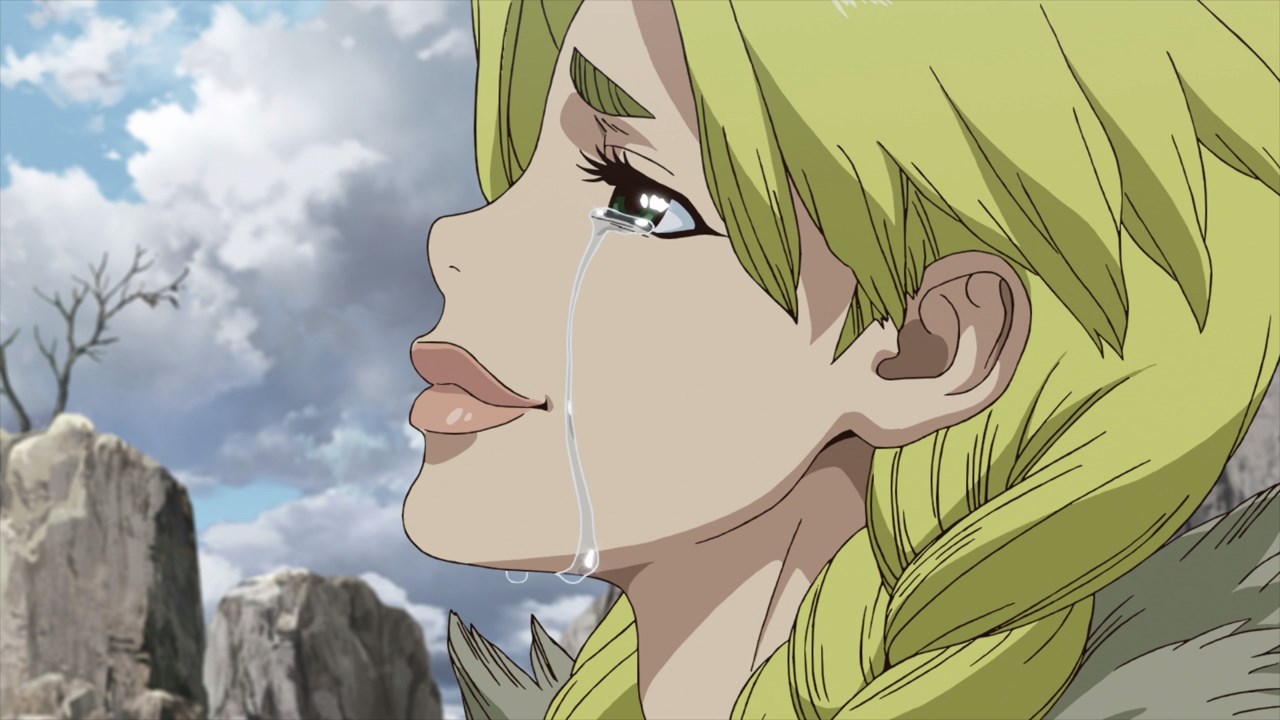 Of course, Nikki realized that the diva is already passed away. Wait, so that means Senku and Gen’s plan of using Lilian’s likeness is already failed thanks to a super fan?

Well, Nikki is not gonna expose them because c’mon, hearing Lilian’s voice made her very happy. But in exchange, she wants Senku to recover Lilian’s entire discography. 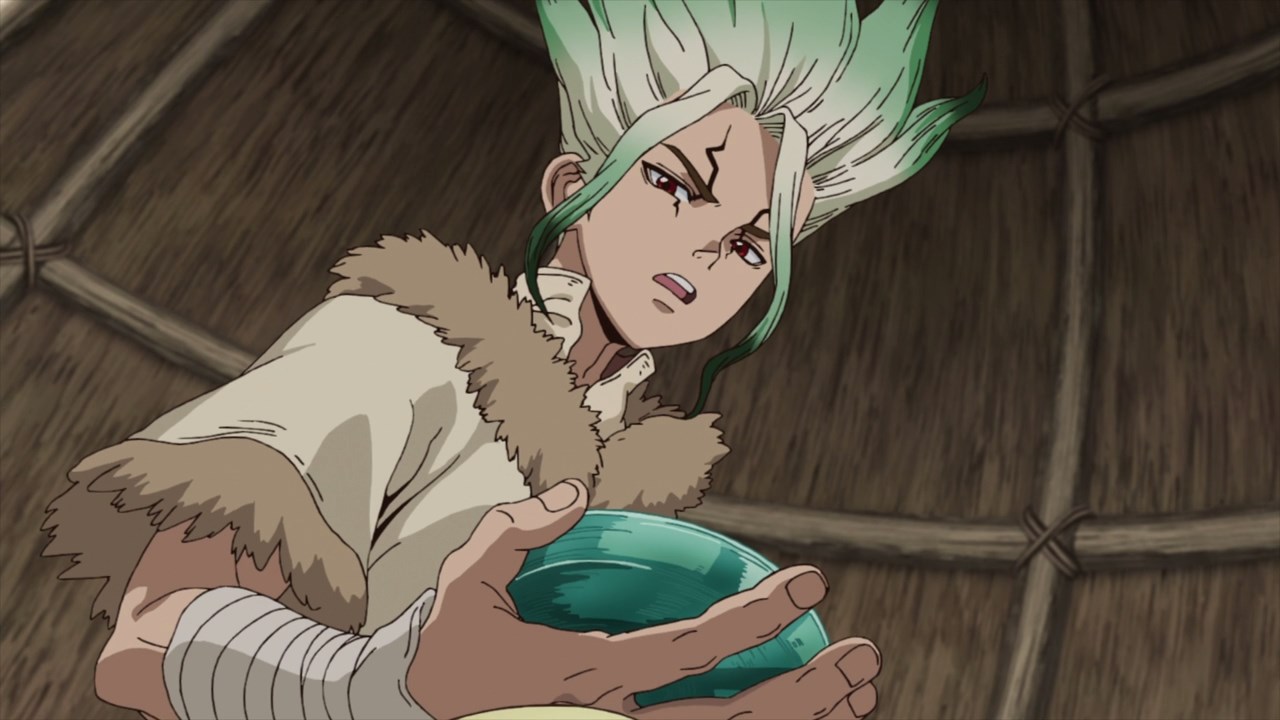 Unfortunately for Niki Hanada, her request is impossible as most of the diva’s recordings are lost forever.

However, Senku reassures to Nikki that he’ll protect Lilian’s last song no matter what. C’mon, her recording is the only proof that modern civilization still exists. 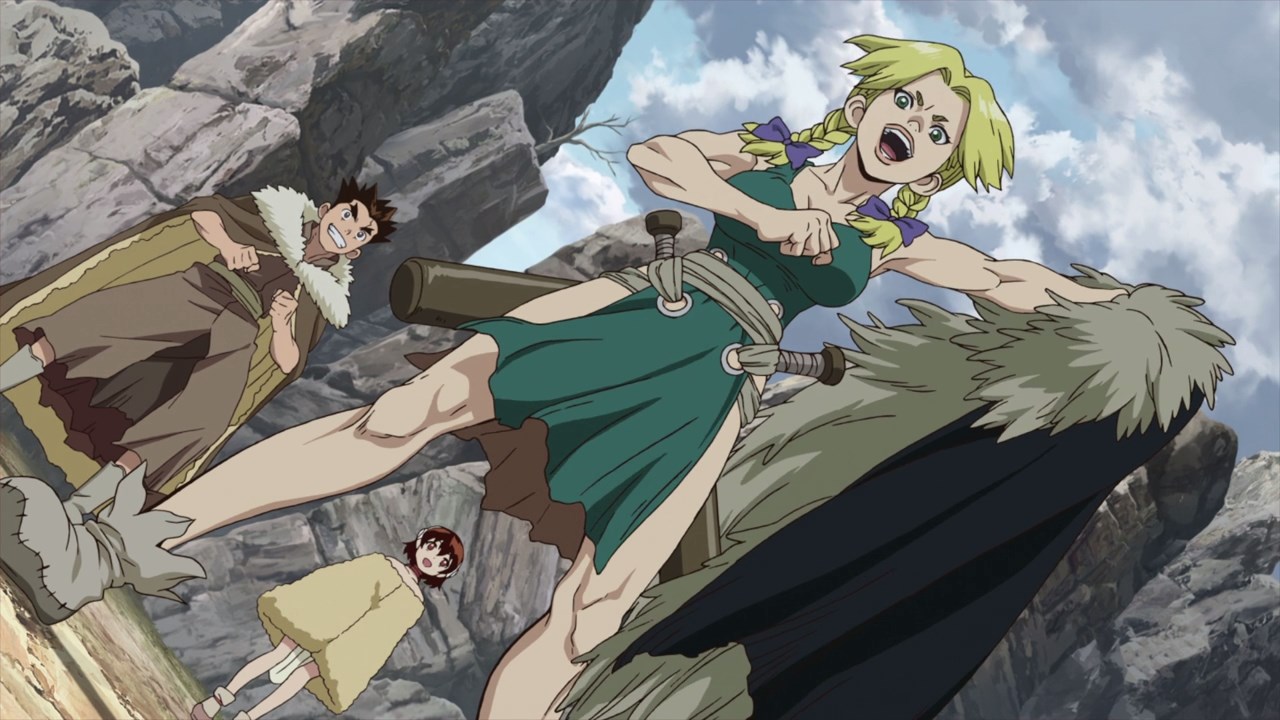 In any case, looks like Niki Hanada has decided to join Senku’s side thanks to Lilian Weinberg’s song. Of course, the only thing I’m worried about is Tsukasa Shishio and his allies ’cause there’s no way that they’ll lay down their arms upon hearing the diva’s song.

Well then, I’ll see you next time where I have a feeling that the Empire of Might will make their full assault at Ishigami Village.