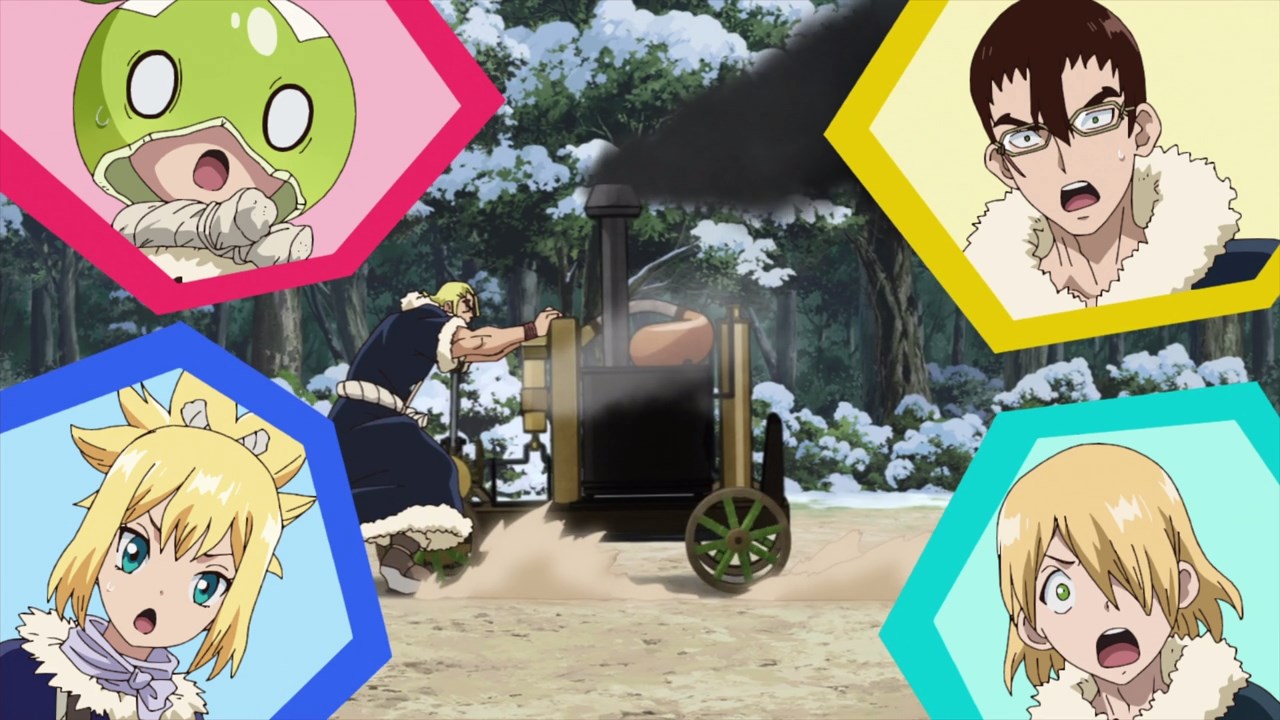 Well everyone, looks like Magma is about to test Senku’s steam-powered car by pushing it away. Um Magma, I don’t think you’ll ever push it. 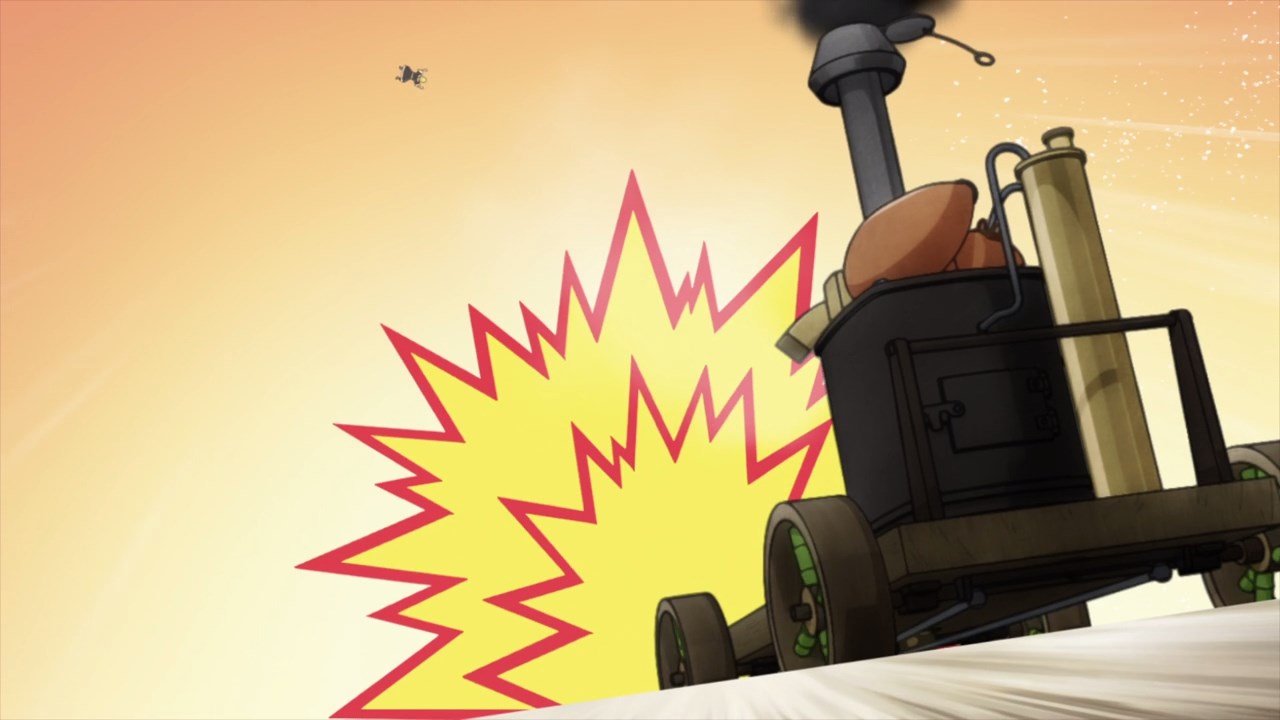 And as you can see, Magma loses as the strongest man in Ishigami Village went sky-high. Of course, he’ll survive since Magma is tough as nails. 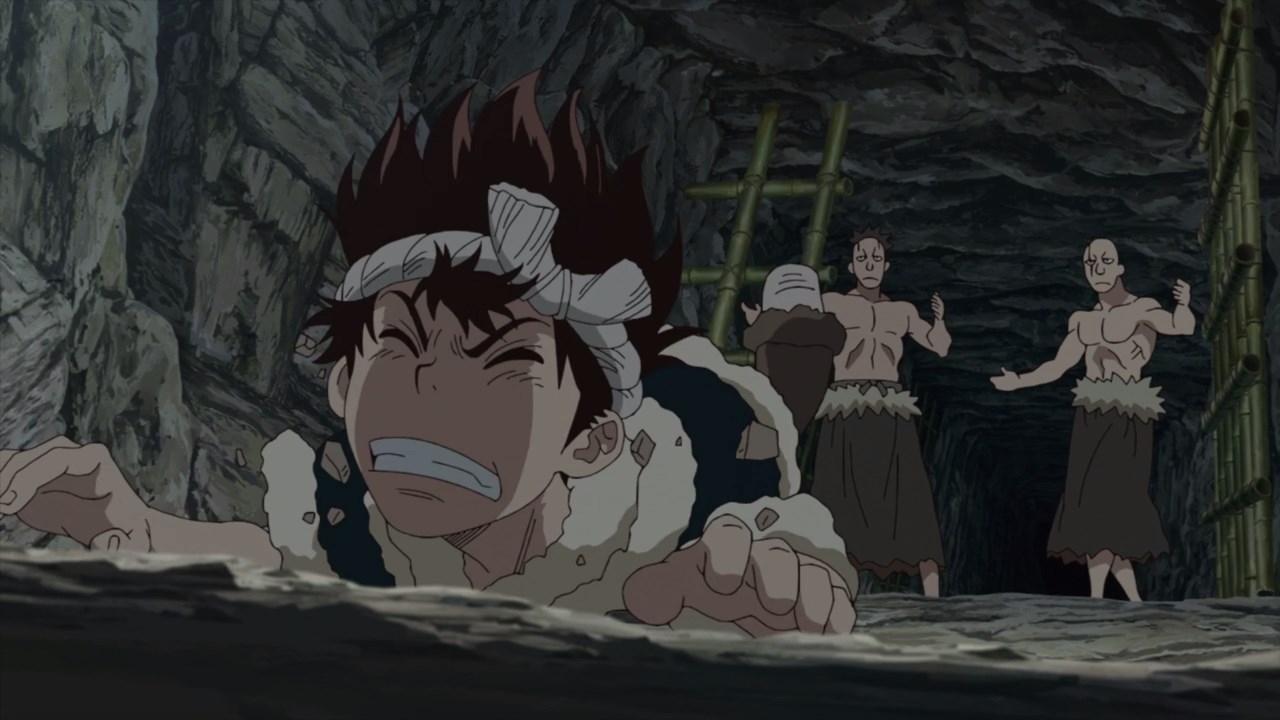 Meanwhile, here’s Chrome where he’s still being taken as a prisoner in Tsukasa Shishio’s Empire of Might. Man, I wonder what Tsukasa is planning for Chrome? 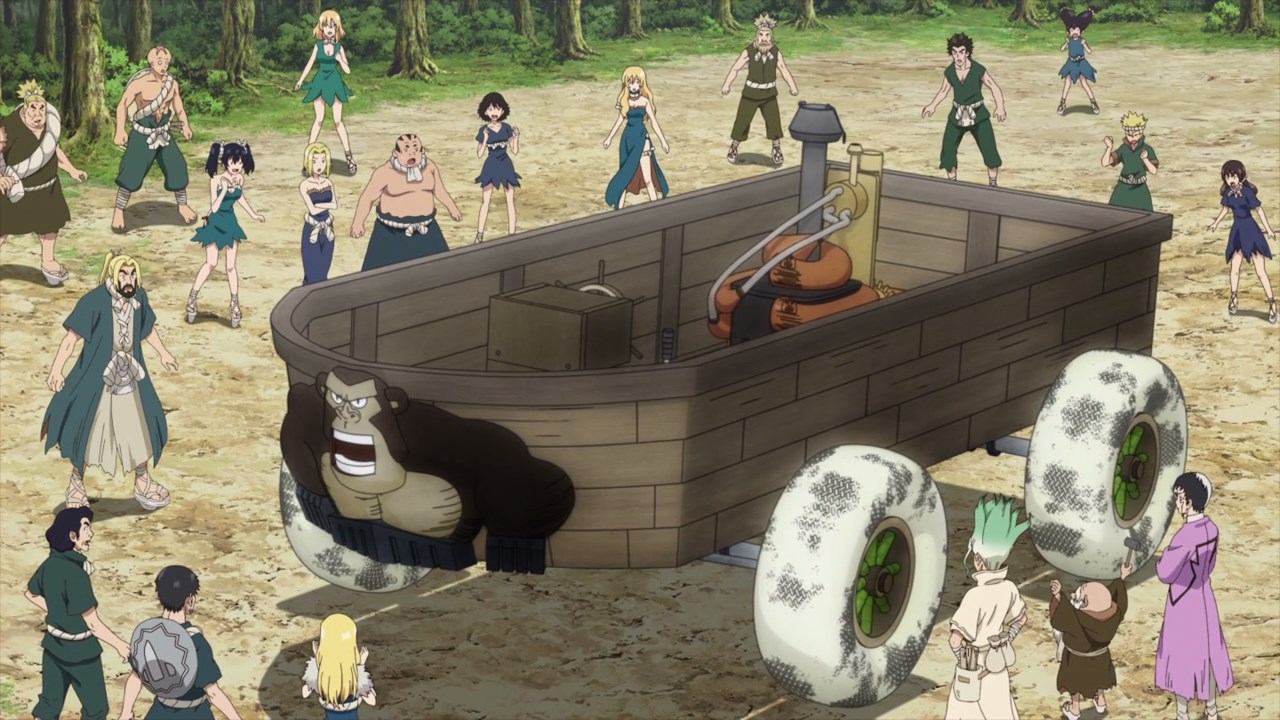 Now then, spring has arrived as Senku and his friends have finally refined their first steam-powered car, now dubbed as the Steam Gorilla since it has a gorilla at the bow.

Anyways, time to march towards the Empire of Might as everyone from Ishigami Village will take part. 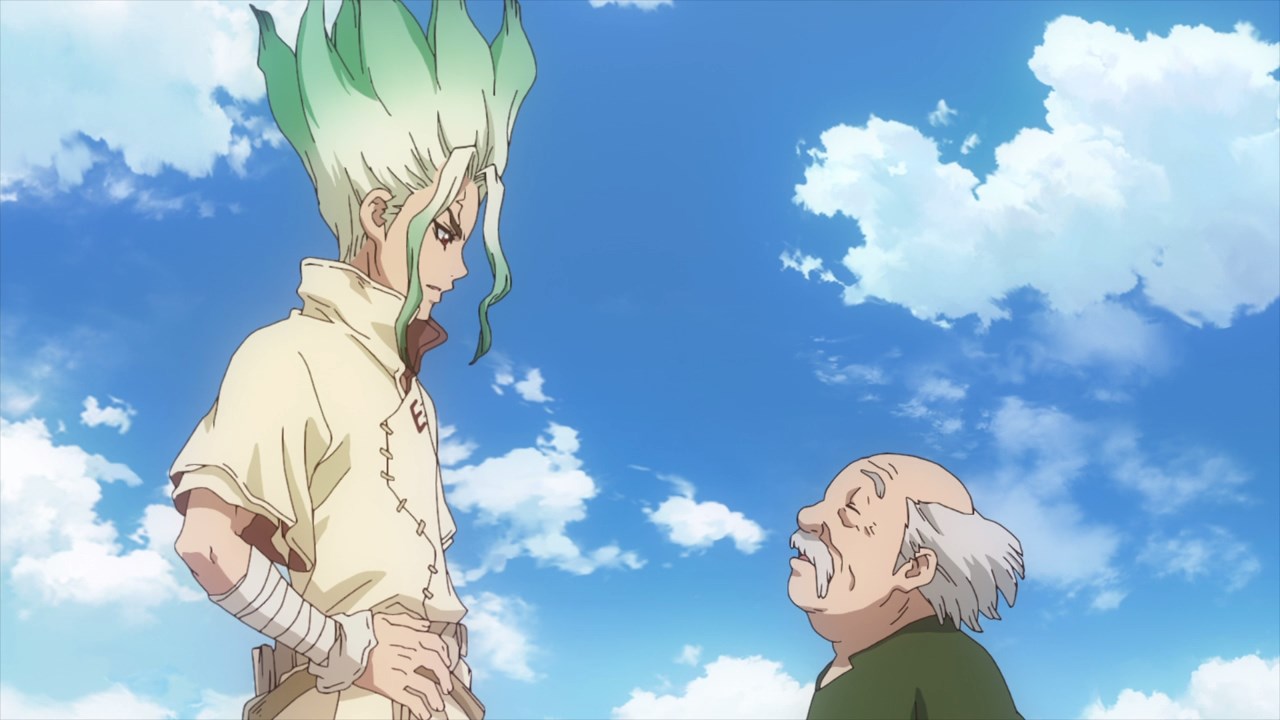 Well, not all of them as the elders decided to stay at the village ’cause they might hinder Senku and his allies when fighting against Tsukasa Shishio.

While I understand that they can’t fight since they’re too old, I’m scared that Ishigami Village is undefended. Of course, there’s Homura where she’s currently locked-up there but I doubt if she can protect the elders from a surprise attack. 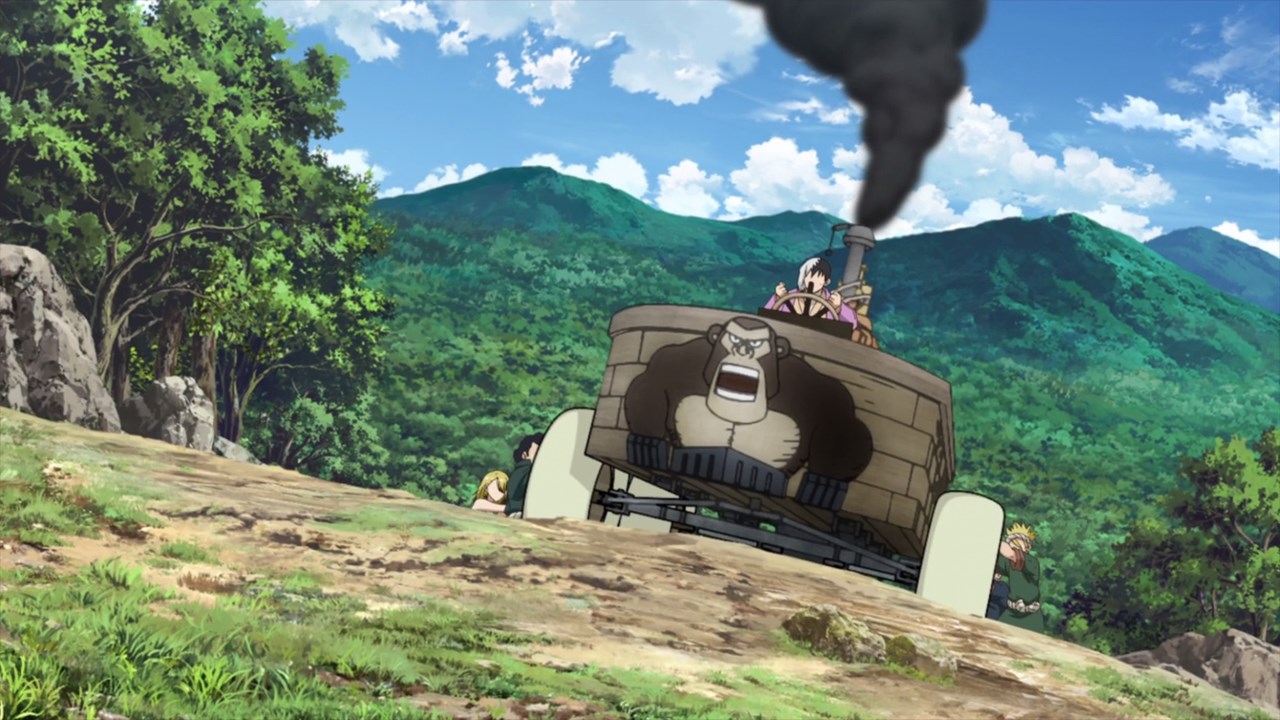 By the way, turns out that the Steam Gorilla has some weaknesses where its engine is not powerful enough to climb hills, not to mention that the car is vulnerable to attacks from above.

Oh and if they plan to ram the Steam Gorilla to Chrome’s prison cell, forget about that ’cause it’s not tough enough to break rocks due to its wooden construction. C’mon, they put wheels and an engine on a large wooden boat. 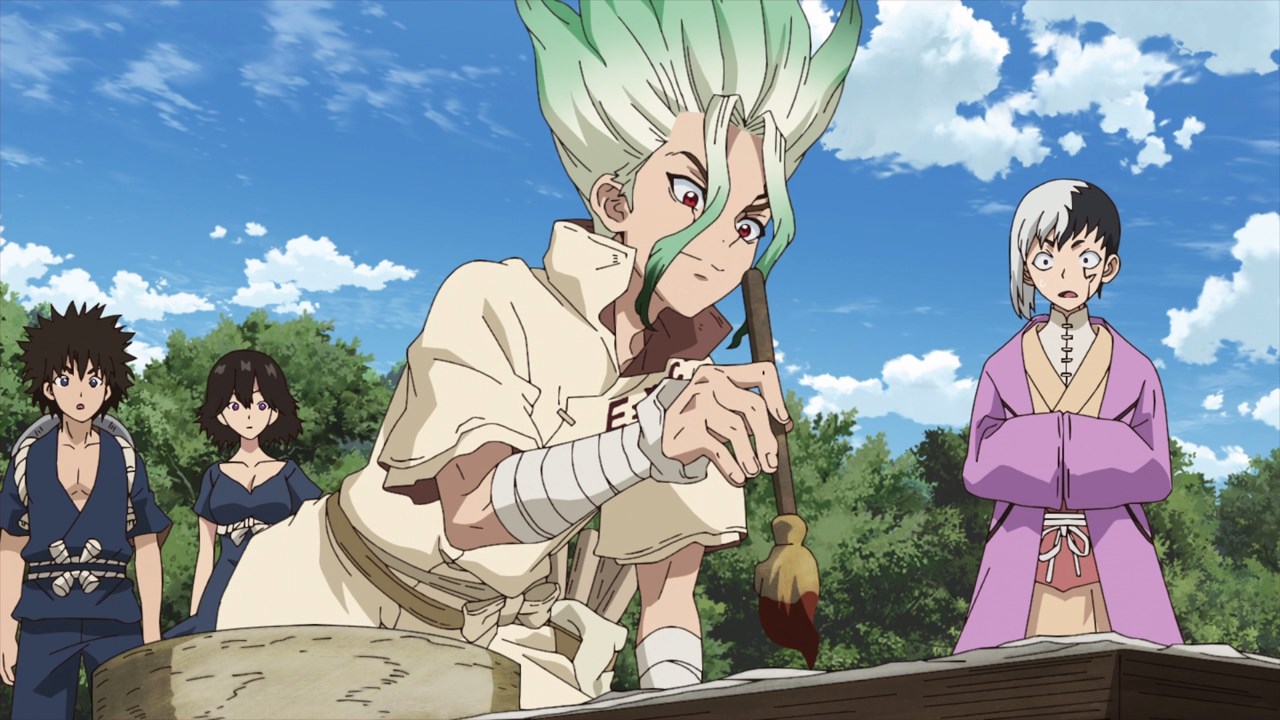 That’s where Senku came up an idea as he created something out of paper (which is made from weeds by the way) and molten beeswax as adhesive. 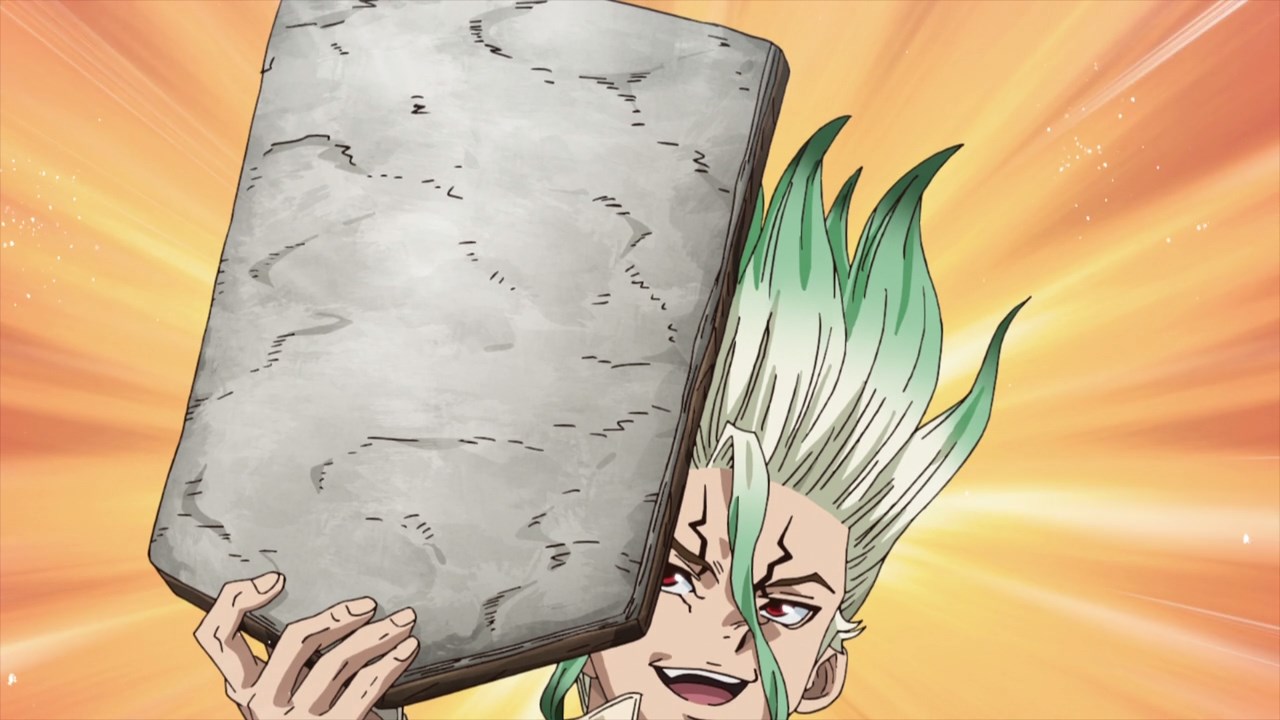 Anyways, what he created was a paper shield which is lighter than a leather shield. But since it’s made from paper, everyone doubt that it can withstand blows or even punctures. 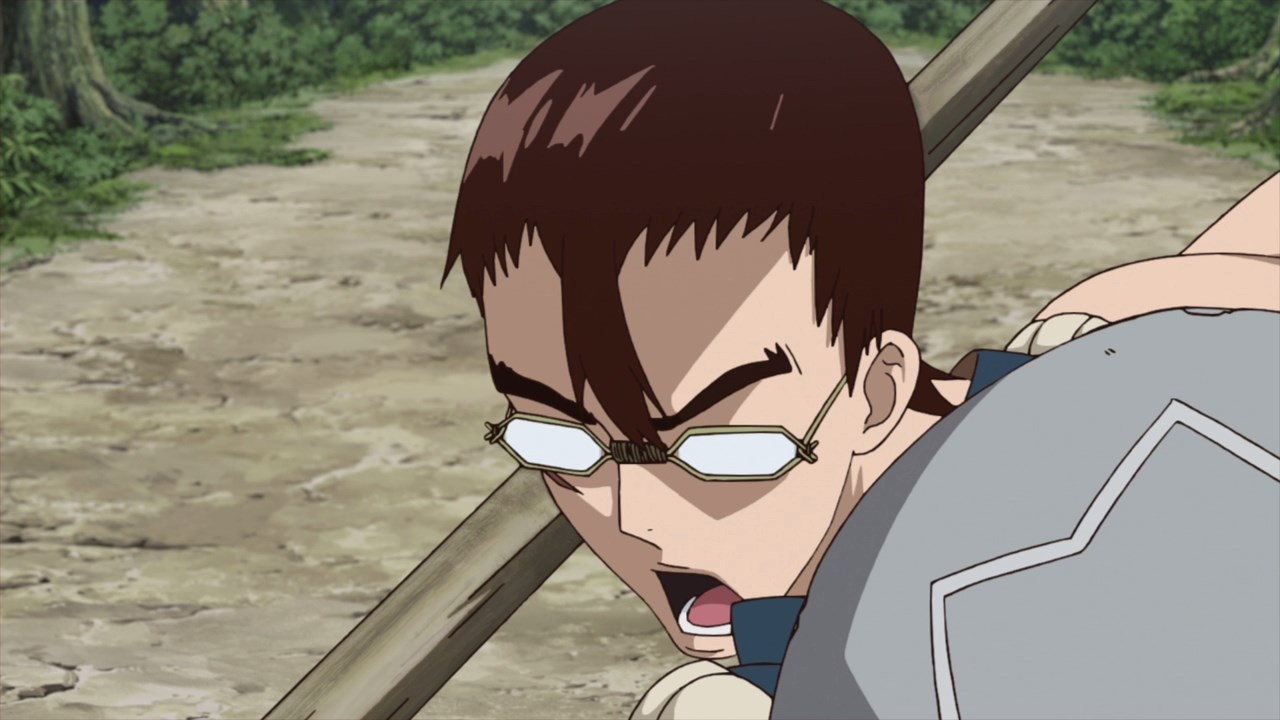 Well then, time to test it out as Kinro will try to pierce the paper shield, although it’ll be dangerous since he might accidentally kill Senku. 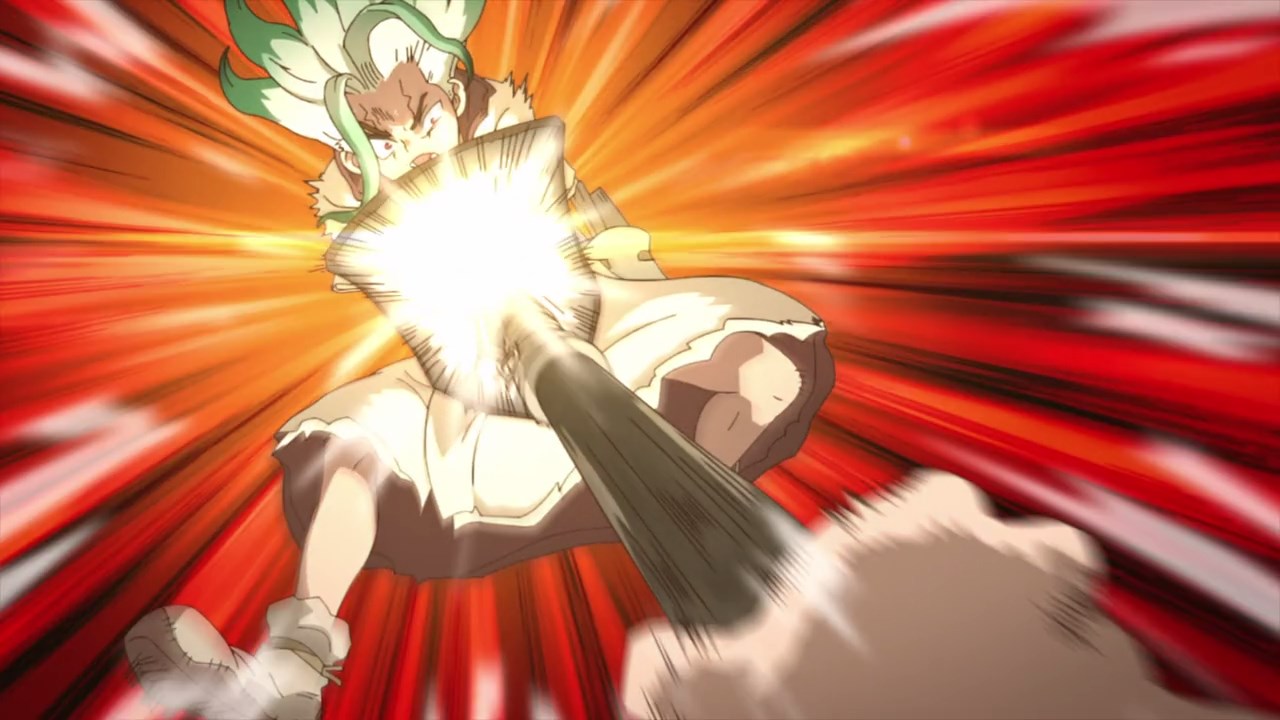 Still, Senku will take the plunge into danger as he puts his paper shield to the test. I hope there won’t be any mishap! 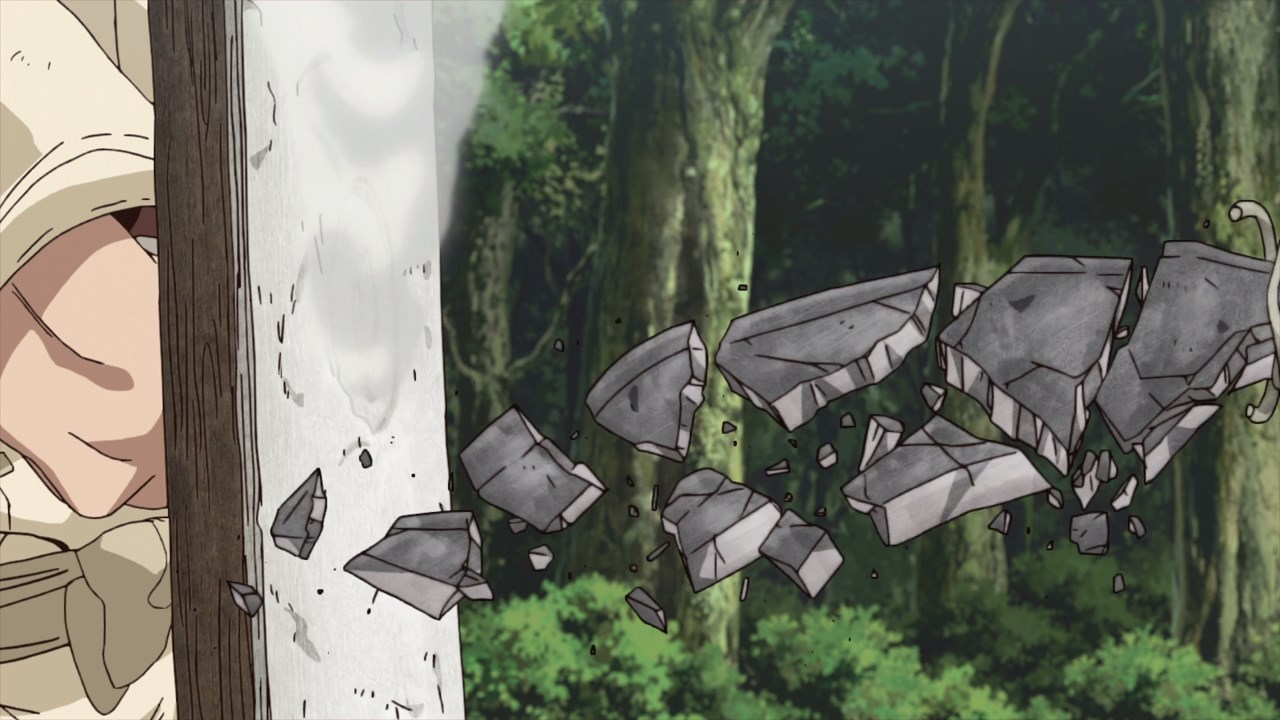 However, it turns out that Kinro’s spear got wrecked as it made a dent on Senku’s paper shield. No punctures, just a dent! 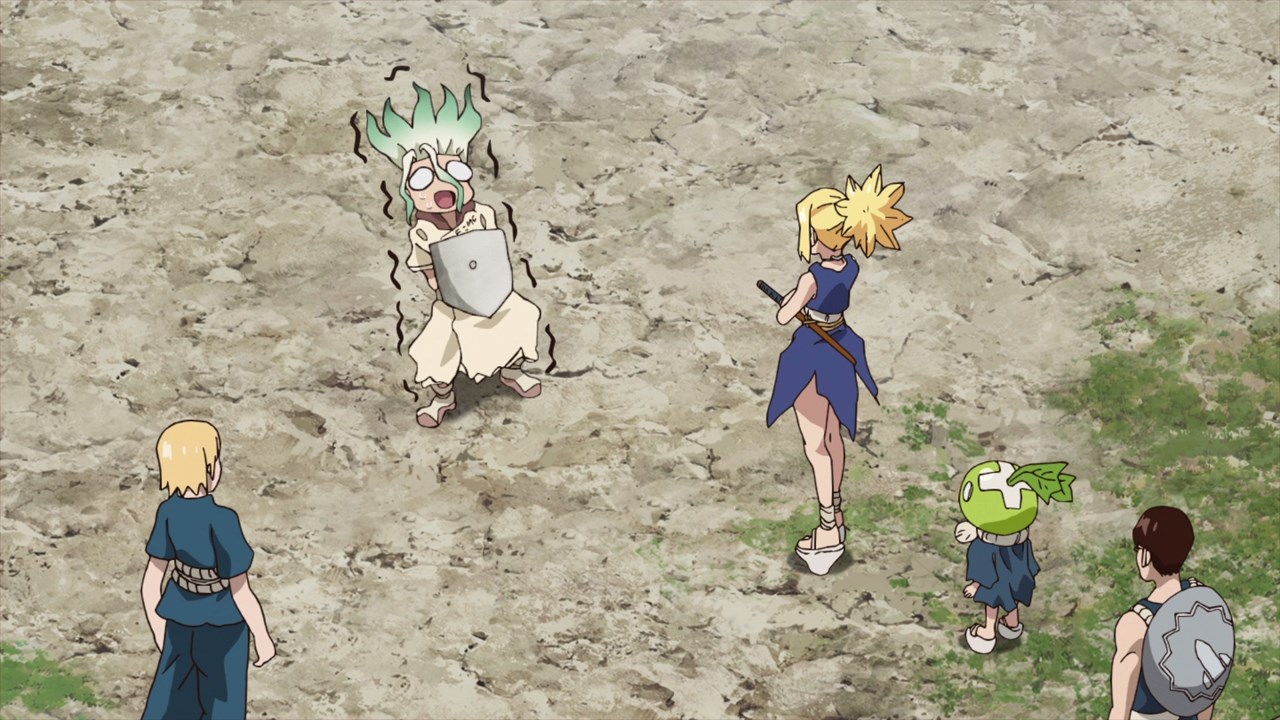 Then again, Senku is a bit shaken as he took the full brunt of Kinro’s spear strike. Would it be better if Magma holds the paper shield?

In any case, what Senku created was essentially carbon fiber where he used paper and beeswax resin to create a light and strong material, which is perfect for the Steam Gorilla. 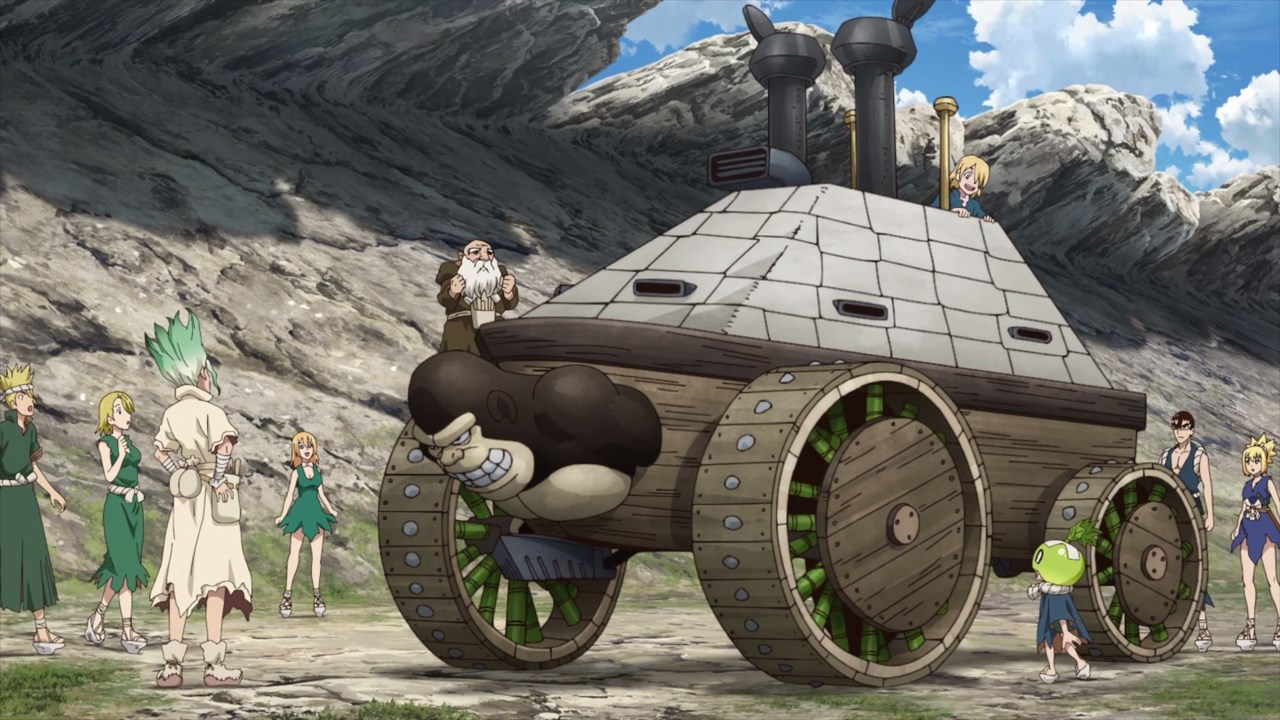 And speaking of the Steam Gorilla, here’s the upgraded version where the top is covered off with Senku’s paper shield while it has a two-cylinder steam engine.

Then again, I feel that the hull is still made of wood that it would be nice if Senku applied paper and beeswax resin to strengthen it. 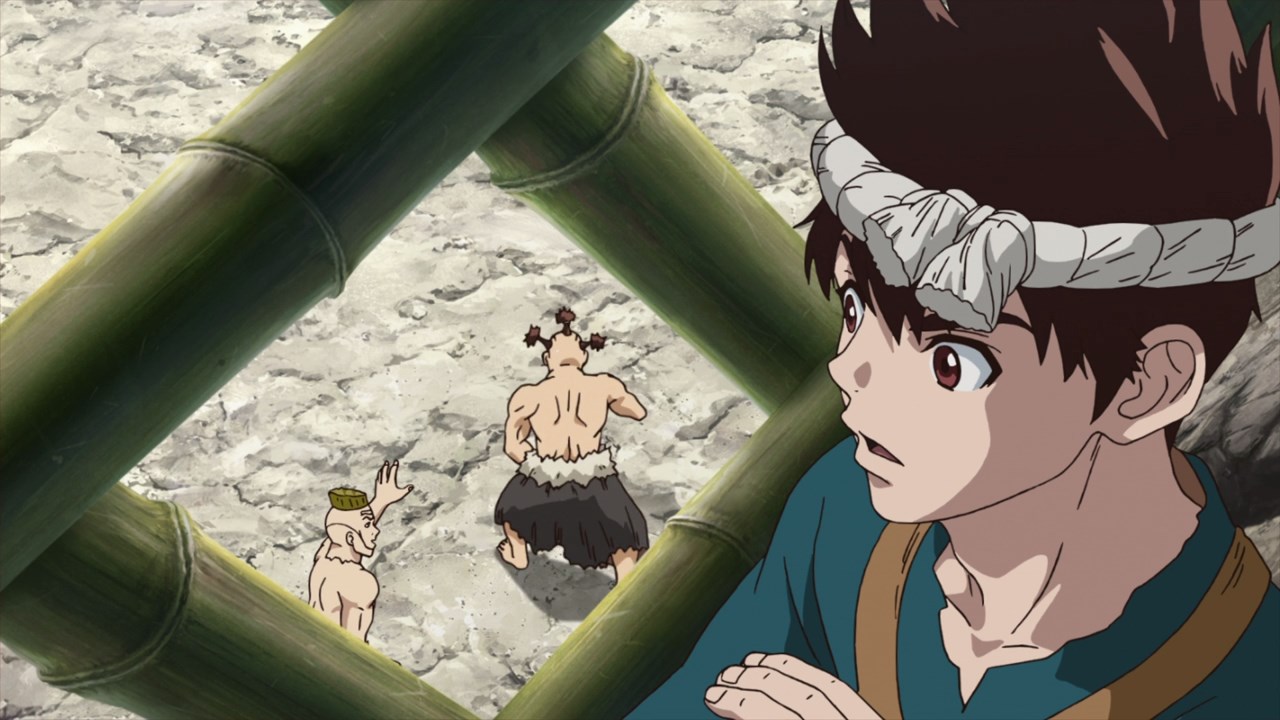 Meanwhile, here’s Chrome where he’s still stuck at his prison cell. Man, he needs to get out of his cell soon enough. 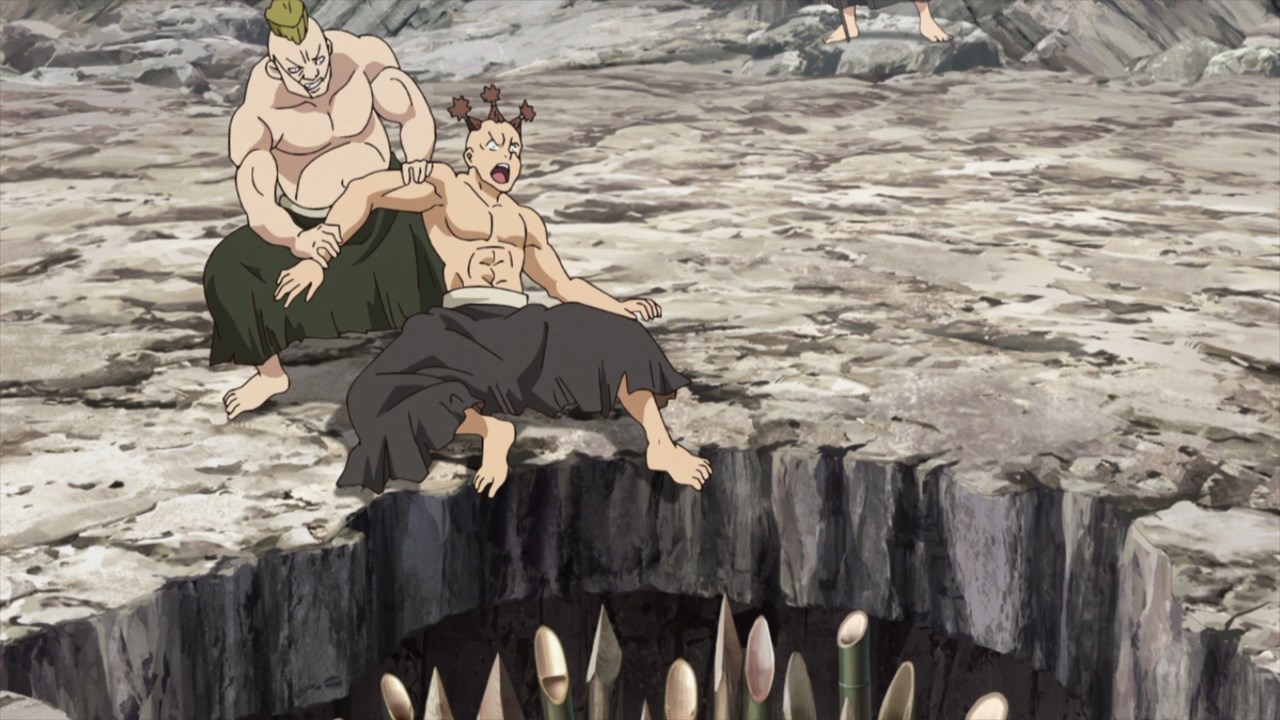 However, it appears that Chrome saw one of Tsukasa’s men almost fell down into a bed of bamboo spikes. Okay, it looks like he can’t get out easily. 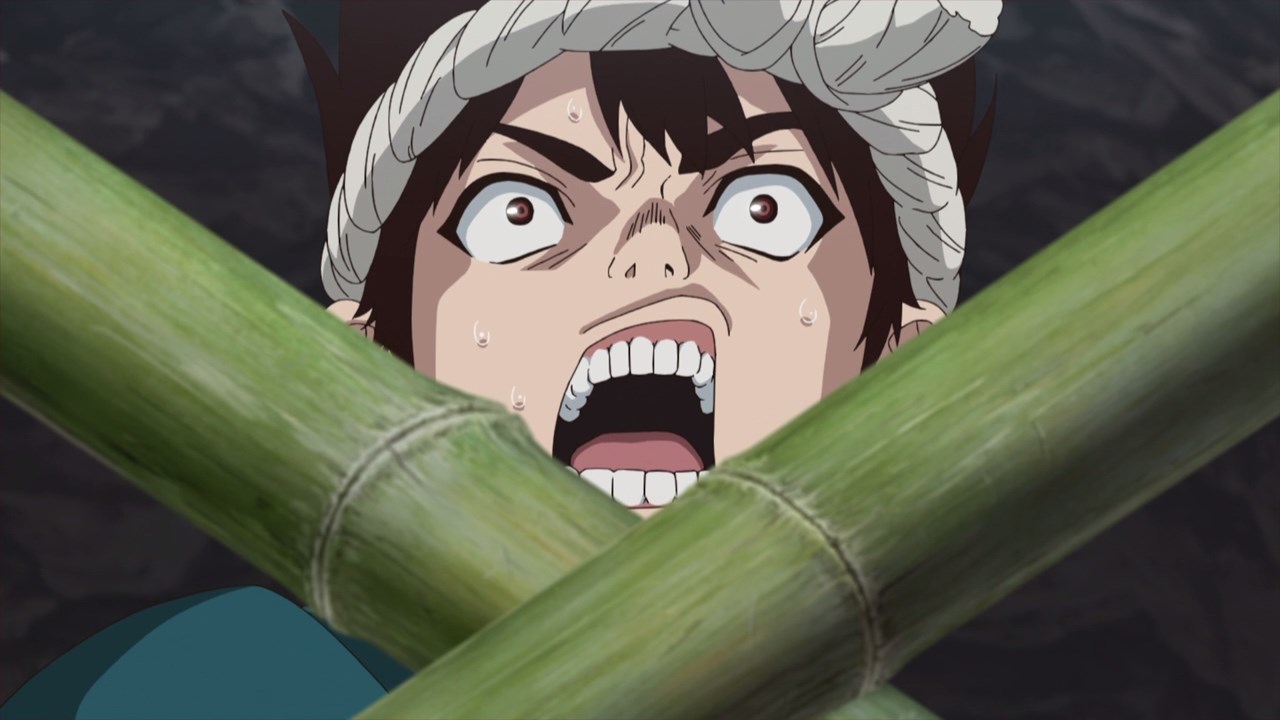 But speaking of Chrome, this is a bad situation ’cause whoever is gonna save him might get caught in this nasty booby trap. Seriously, how did Tsukasa Shishio managed to make it? 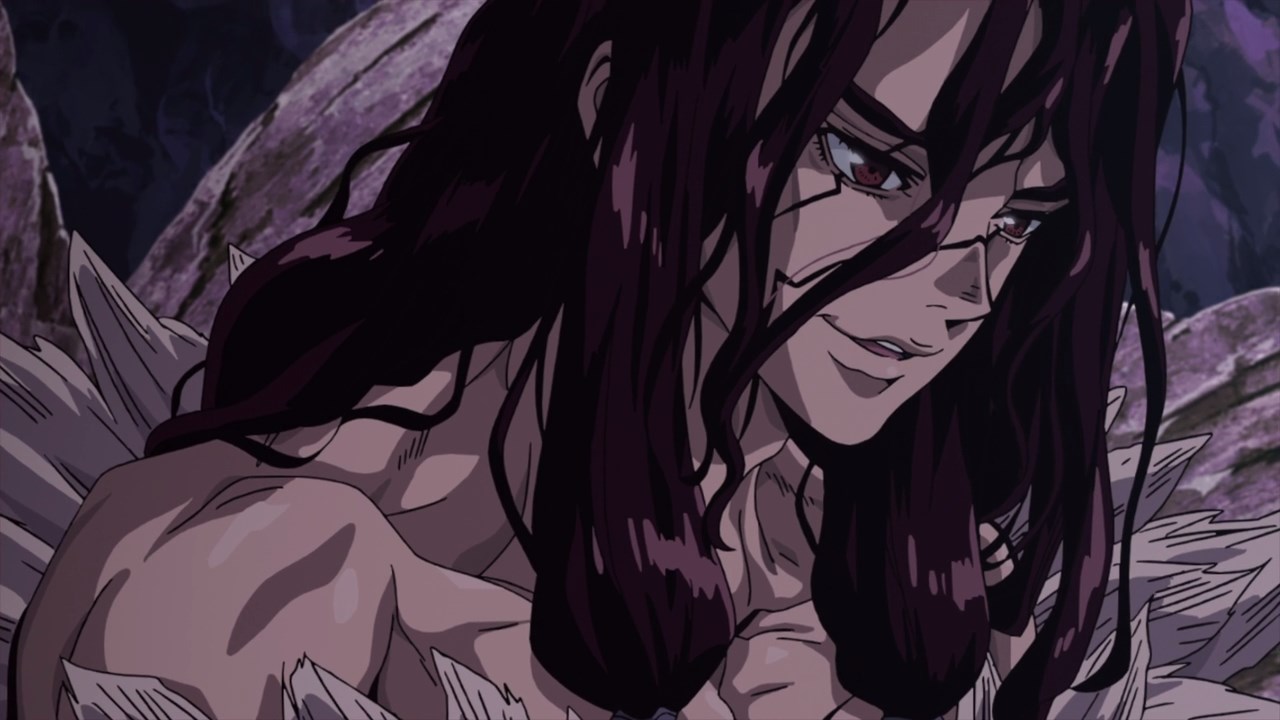 Turns out that Tsukasa deduced Senku’s plans in which he’ll use a steam-powered car to save Chrome, so Tsukasa Shishio create a trap just for him. Okay, it’s either Shishio is a psychic or there’s a spy among Senku’s ranks.

Well then, I hope someone would warn Senku about this booby trap on the next episode. Then again, I wonder if Shishio’s men already found out about the cell phone?