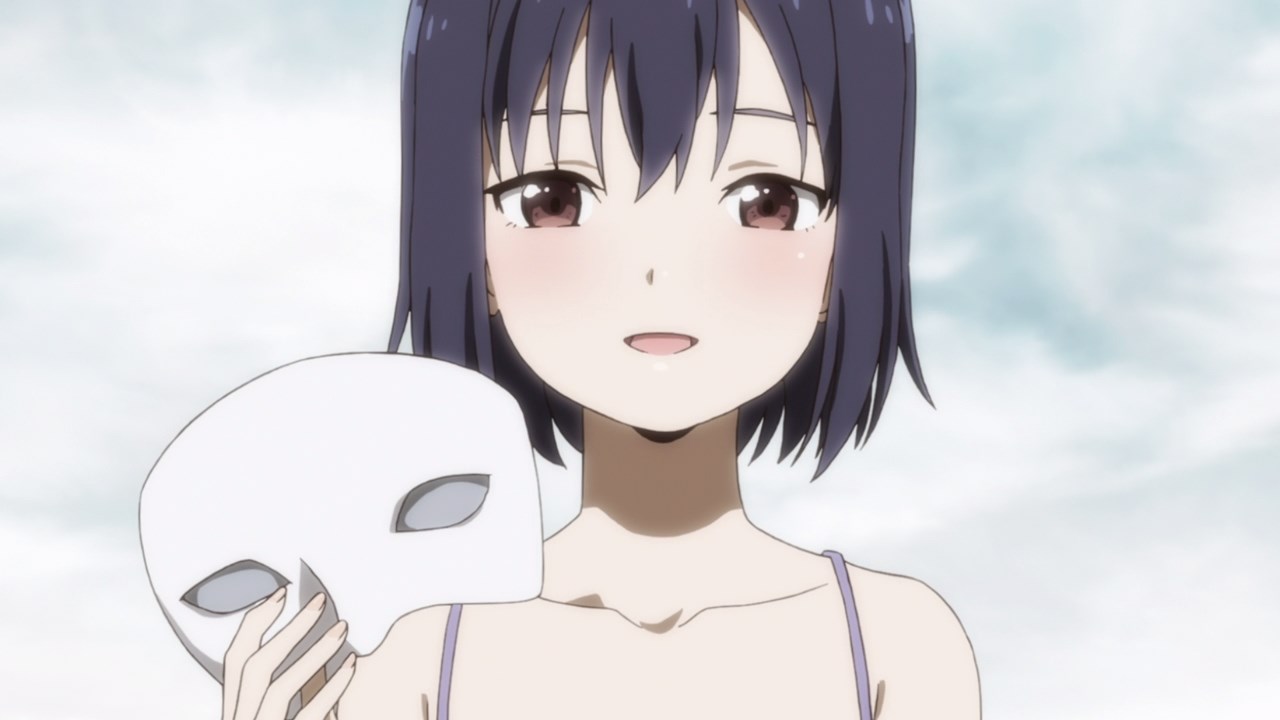 Hey everyone, this is Miki Schteinberg (not confirmed about her full name) where she put on a show for free towards the disaster victims.

Together with Hirokazu Takezaki, they put a smile to everyone’s faces but their dream is over when Miki died. 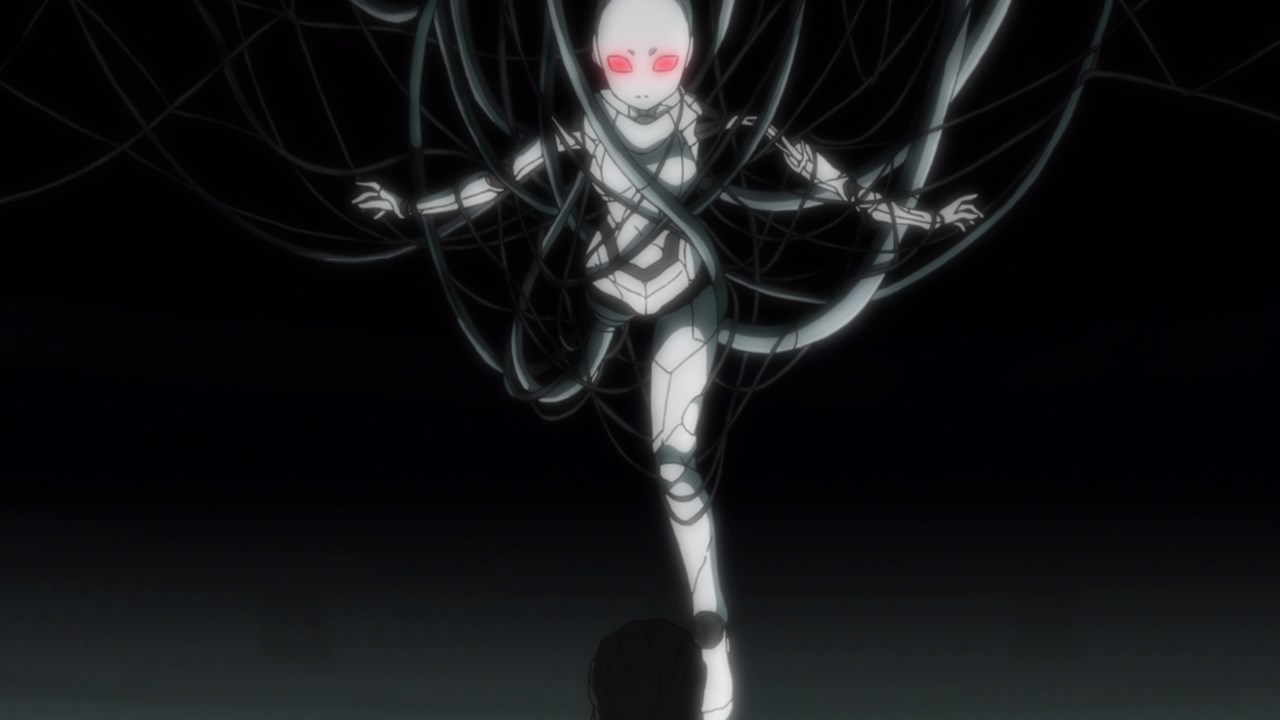 Speaking of Hirokazu Takezaki, looks like he’s putting the final repairs on this Act Doll and I have to say that not only his life went astray because of money, but it’s gonna get worse for him later on since this Act Doll might break his mind. 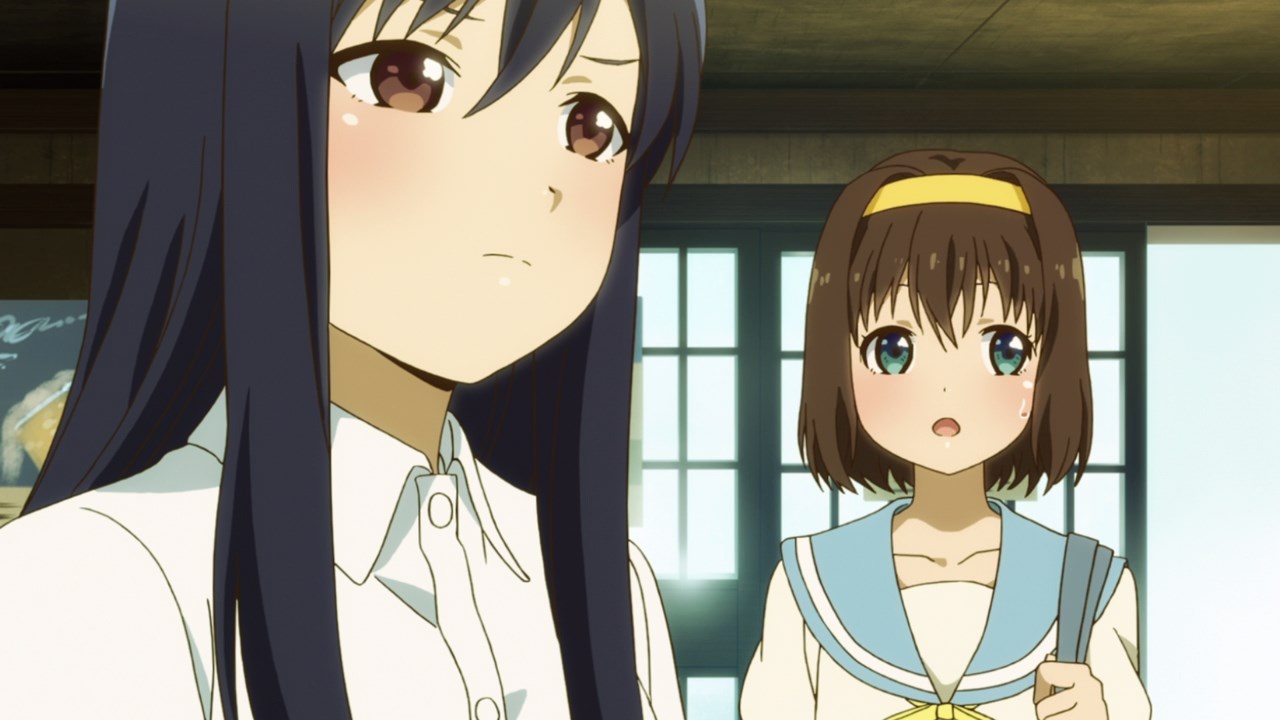 Now then, let’s move onto the main story where Kaoru Sakakibara invited Seria Morino at the homuron restaurant to relieve some stress by eating. Don’t know if they have the money to buy one bowl though.

Unfortunately, it appears that they saw a familiar face inside the restaurant. 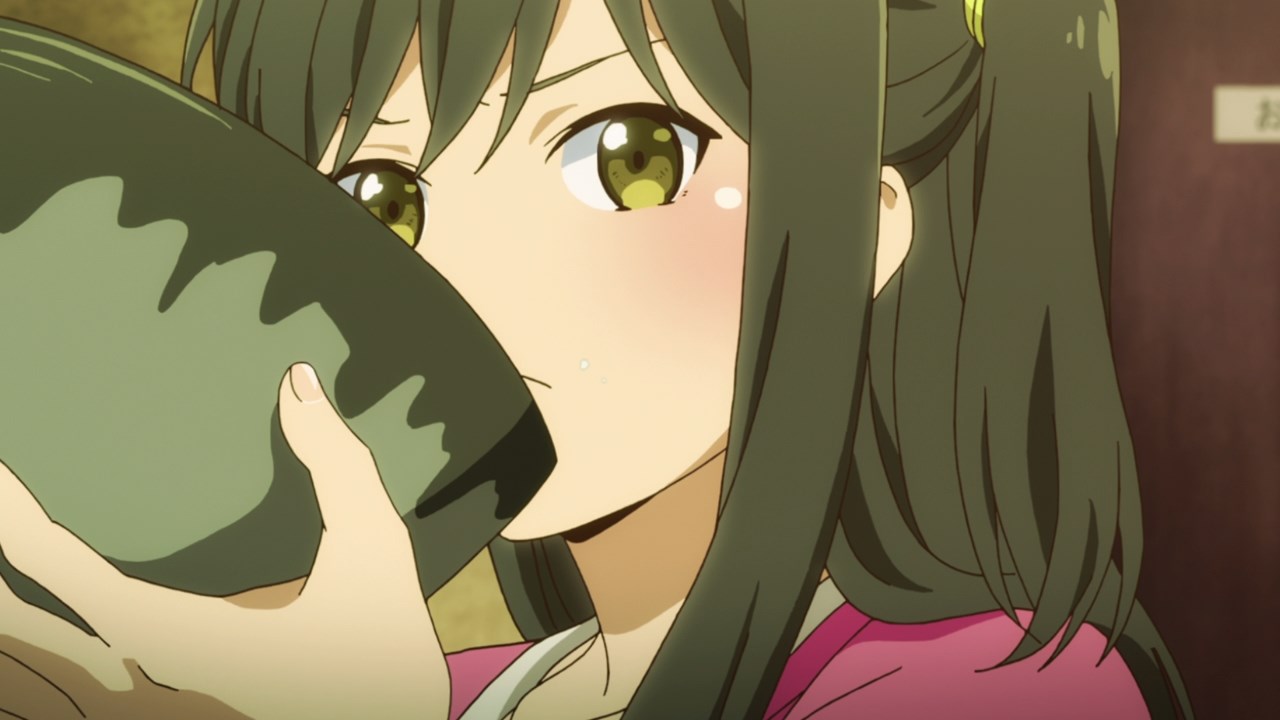 Turns out that it’s none other than Izumi Hinazaki where she wants to eat a bowl of homuron rather than going on a fancy restaurant. As expected from a former member of Alice in Theater.

Still, Izumi is surprised that Seria is a good actress to the point that she considered Morino as her rival. Of course, Seria Morino is still emulating various actresses like Airi Kagami that she’s not yet a top actress. 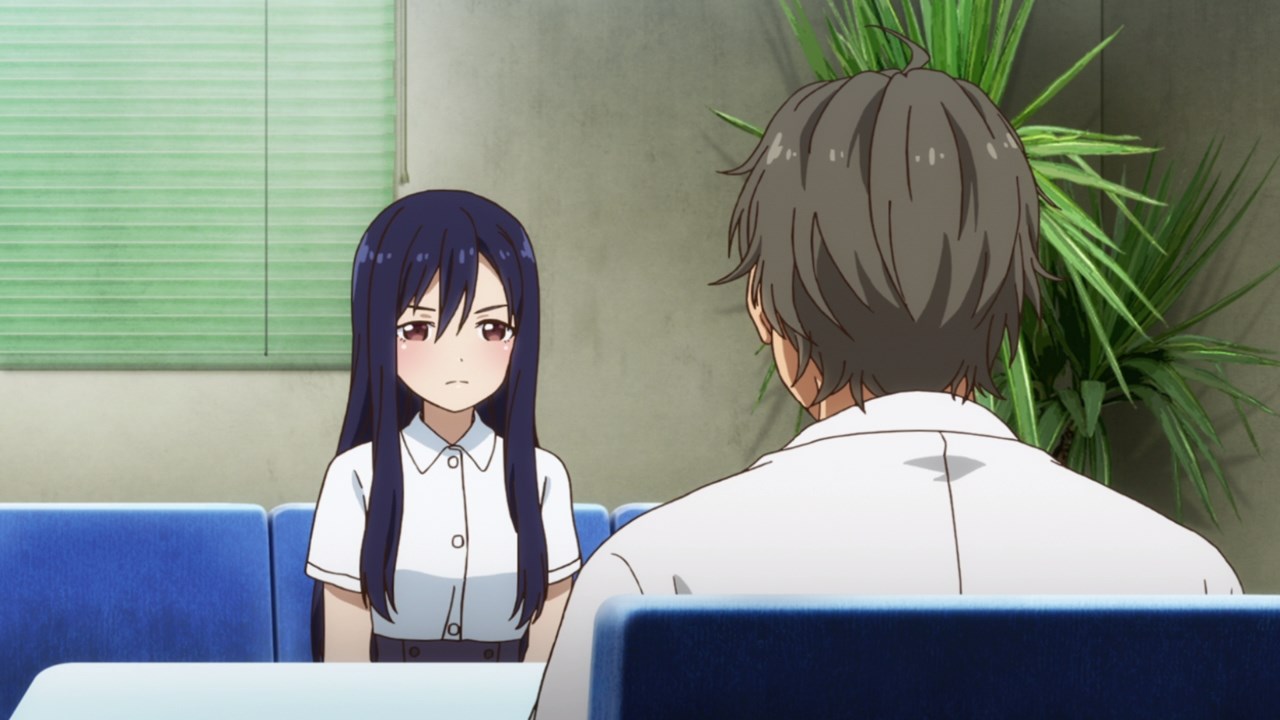 Meanwhile, it appears that Alice in Theater is having another crisis. While the Theatrical Material System is fixed, it costs money for repairs. 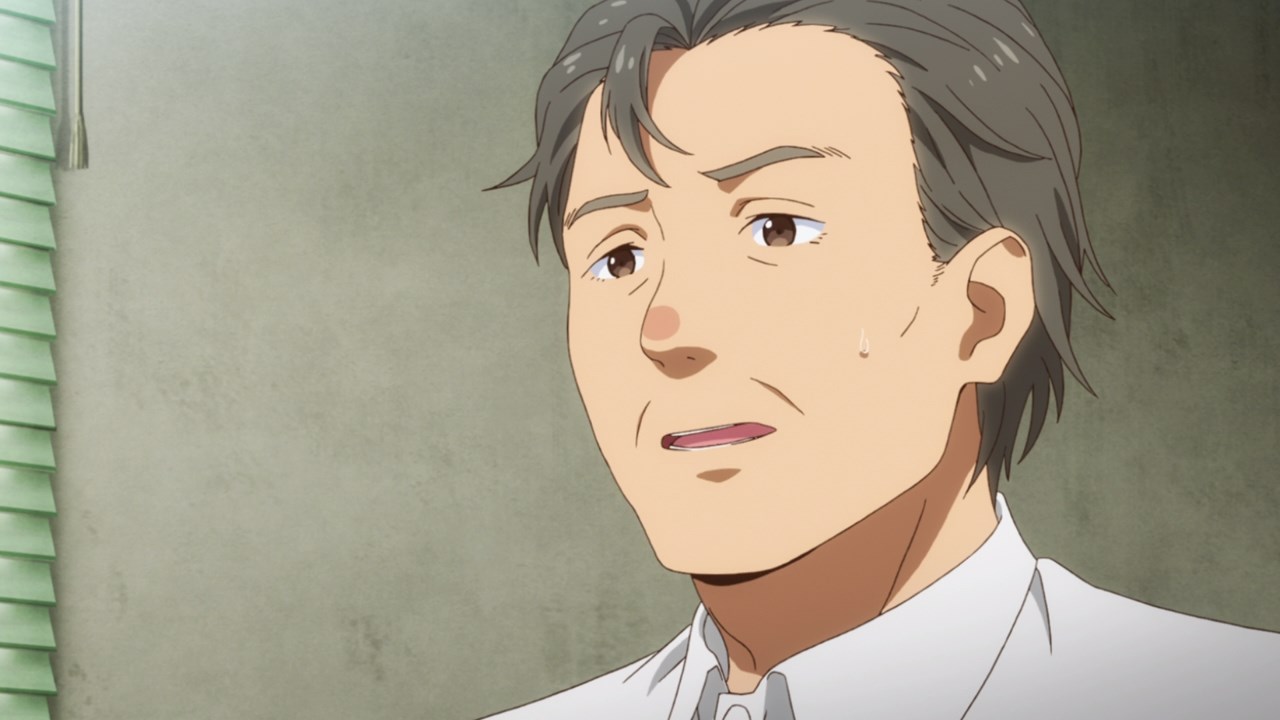 This is bad news for Seria Morino and the others as they have plans for their next stage play production. 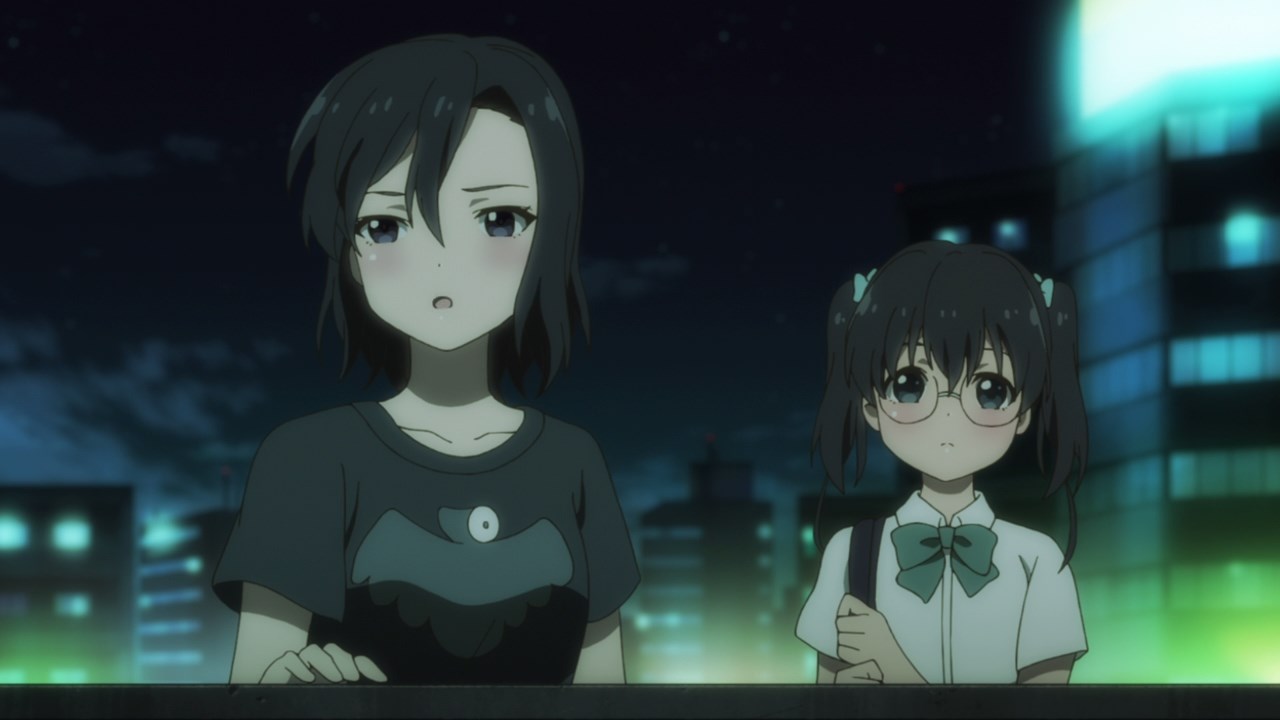 Oh yeah, let’s talk about both Akira Asagi and Aimi Fujita where they’re actually the founding members of Alice in Theater, although Akira is sad that she doesn’t have the opportunity to become the main lead ever since Izumi and Airi joined the troupe.

Of course, Aimi (or Lovemin) still believes that Akira can become the main actress someday. Then again, I’m worried about Super Material Theater buying their small troupe and disband it altogether. 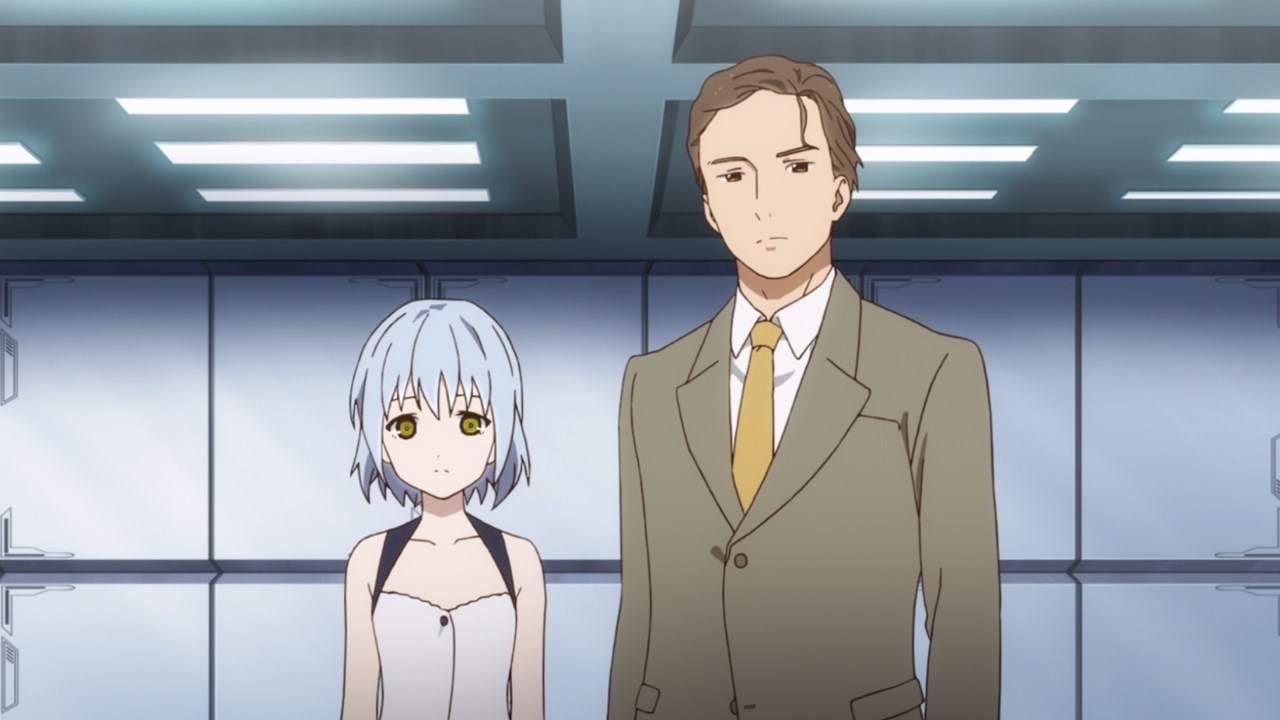 Moving back to SMT where Takezaki-san introduces the newest member to the troupe. That’s right, it’s the Act Doll that he repaired it earlier.

Of course, instead of being called as Alice, this Act Doll goes under the name of Hirokazu’s dead lover Miki. God, this is creepy as hell! 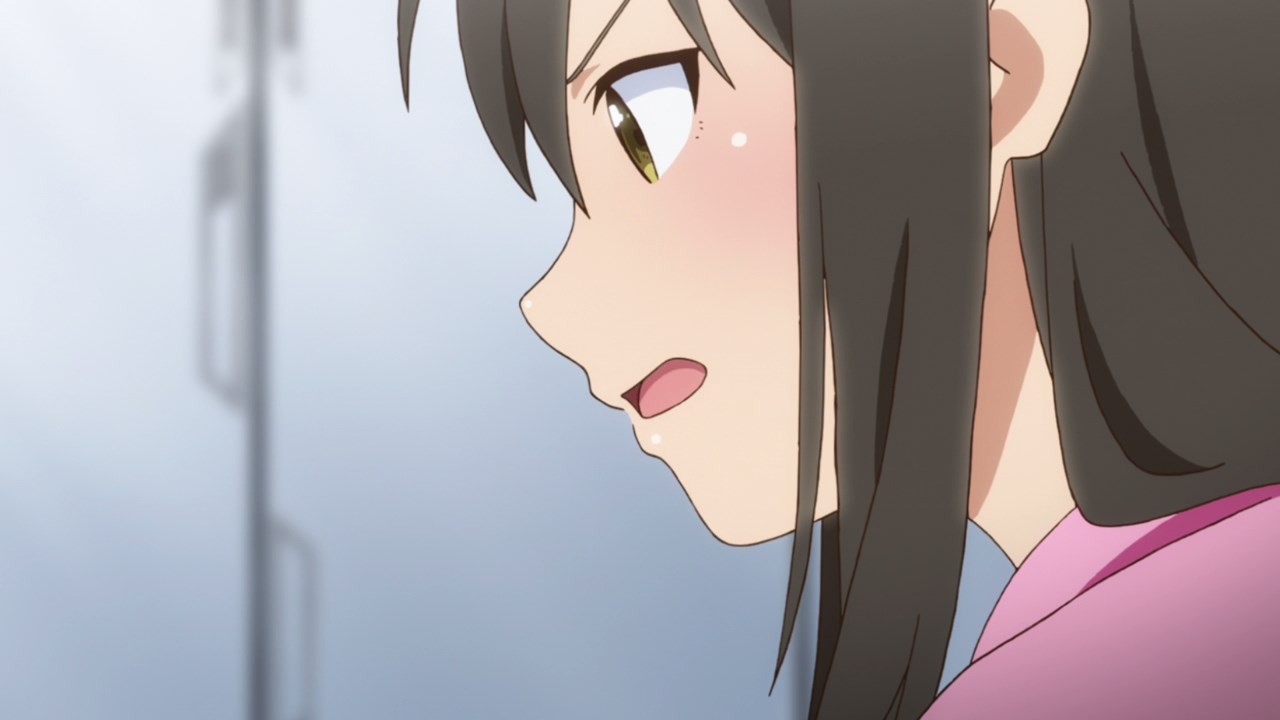 Even Izumi Hinazaki can’t believe that an Act Doll joined Super Material Theater from out of the blue.

Oh, and it gets even worse when Takezaki-san announces that Miki will take the leading role for SMT’s next production, which infuriates Izumi even more that she challenges the Act Doll. 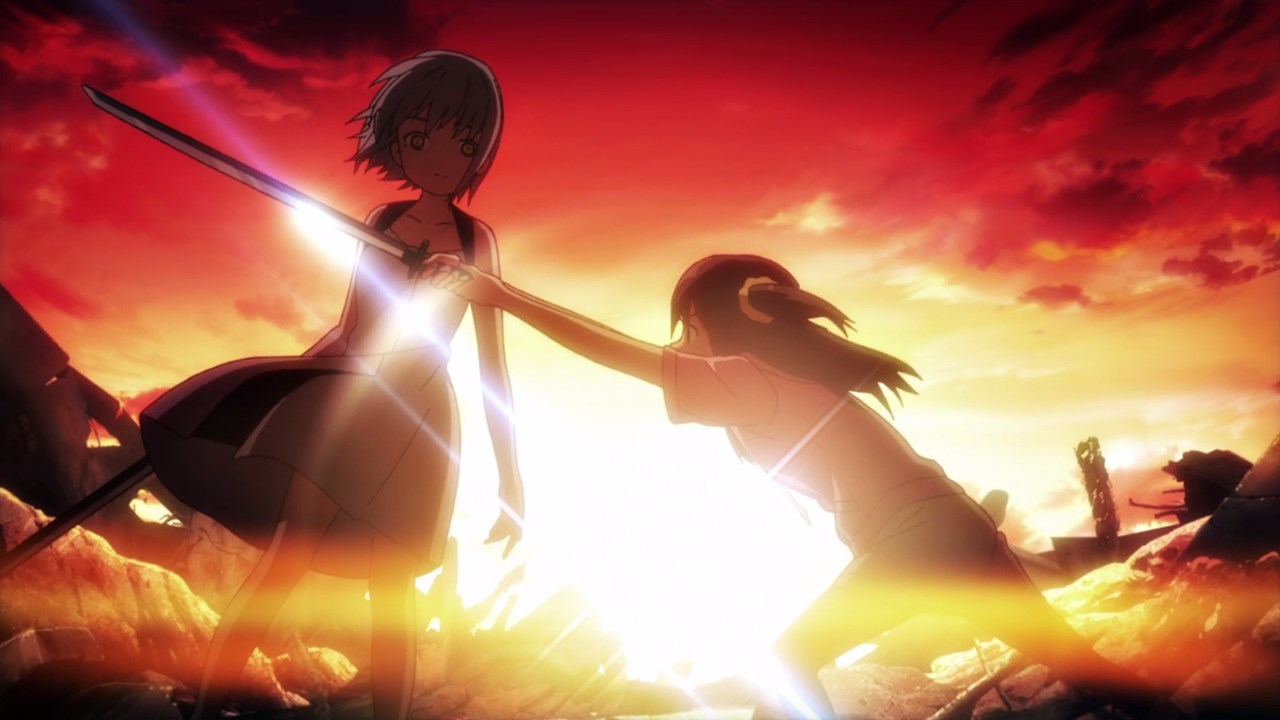 Sadly, Hinazaki can’t beat an Act Doll despite being the best actress in SMT. Man, what the hell is Hirokazu thinking now that he has the Act Doll? 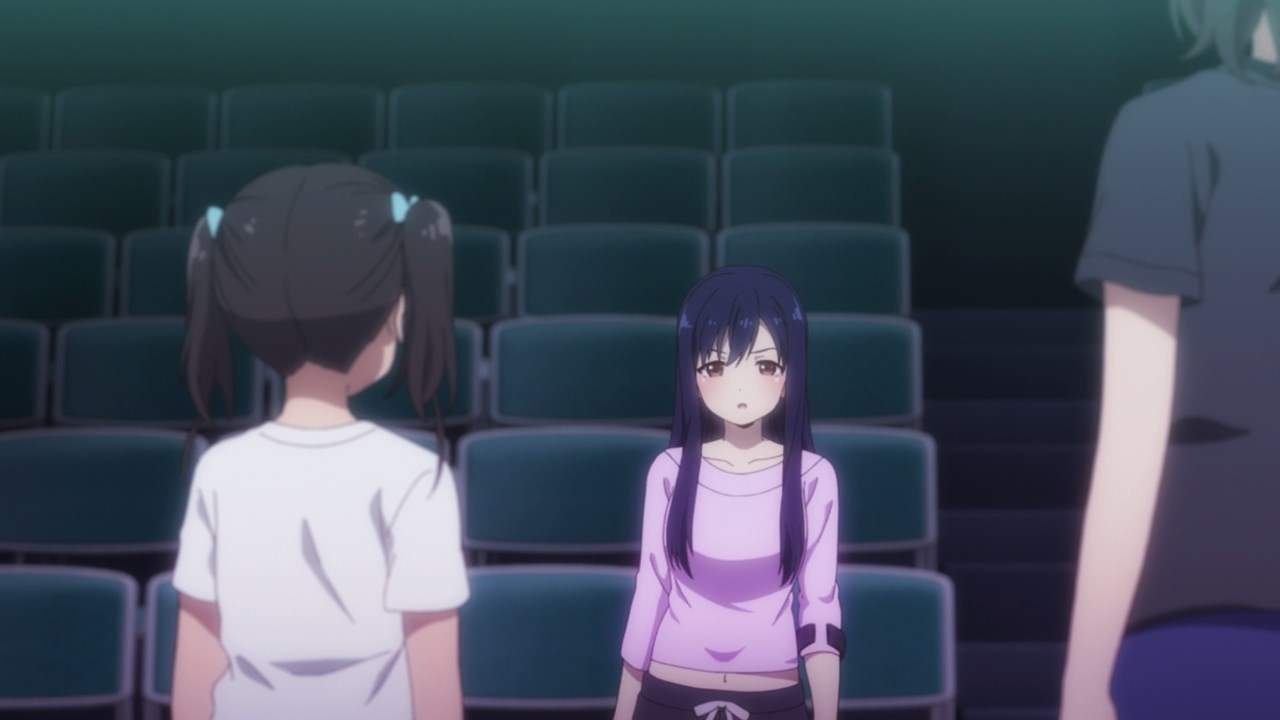 Moving back to Alice in Theater where Kaoru Sakakibara told the bad news that Alice in Theater is being bought by Super Material Theater, therefore she’ll step down as director as Kaoru will focus on gathering funds.

Then again, I wonder if Sakakibara is gonna use her body to gain some cash? That would be problematic. 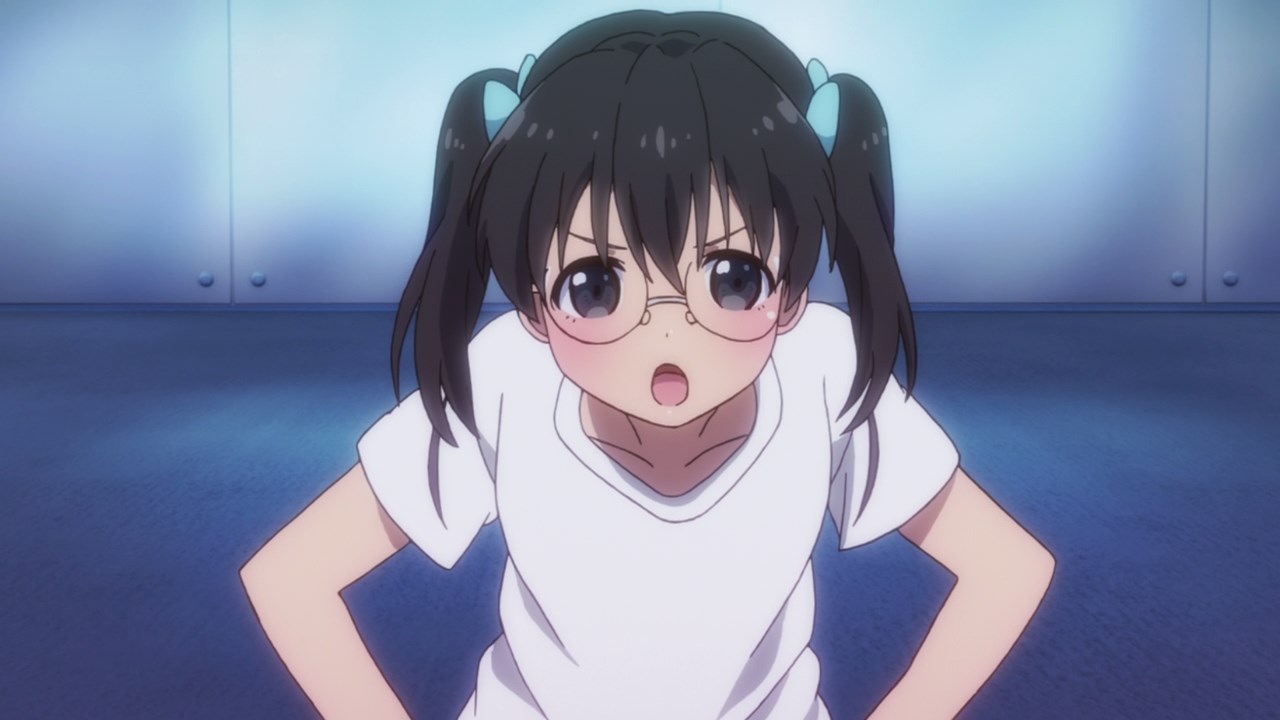 Of course, the likes of Aimi and Akira will do everything in their power to save their troupe from disbandment. Heck, they’ll make new songs to attract more fans.

Okay, I have to say that while I’m impressed on their determination to save Alice in Theater, the remaining members will have a tough battle ahead.

One last thing, looks like Airi Kagami invited Seria Morino to her apartment for some skinship. C’mon, they need to get intimate in order to improve their acting skills.

Then again, Airi is embarrassed that she’s with Seria inside her bathroom. Oh c’mon Kagami, don’t be shy just because you kissed Morino on her birthday! 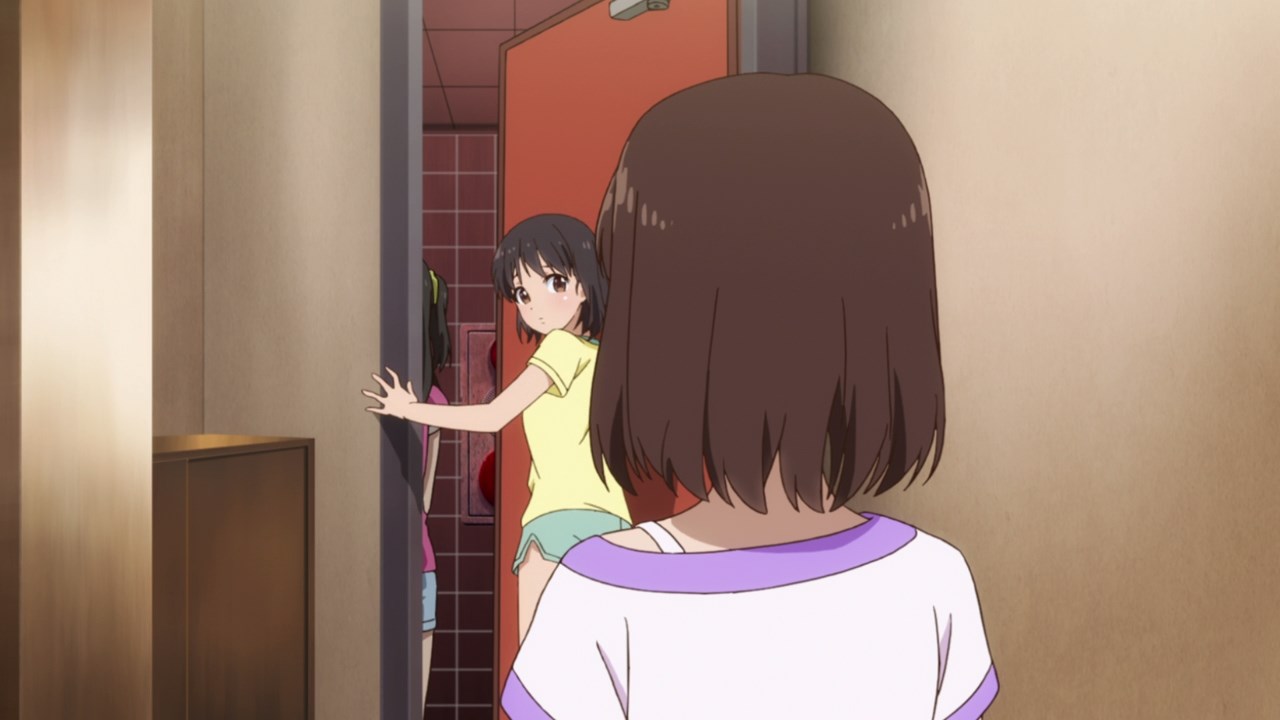 Unfortunately, it appears that there’s an unexpected guest as Airi opens the door. Oh boy, I wonder who is the guest? 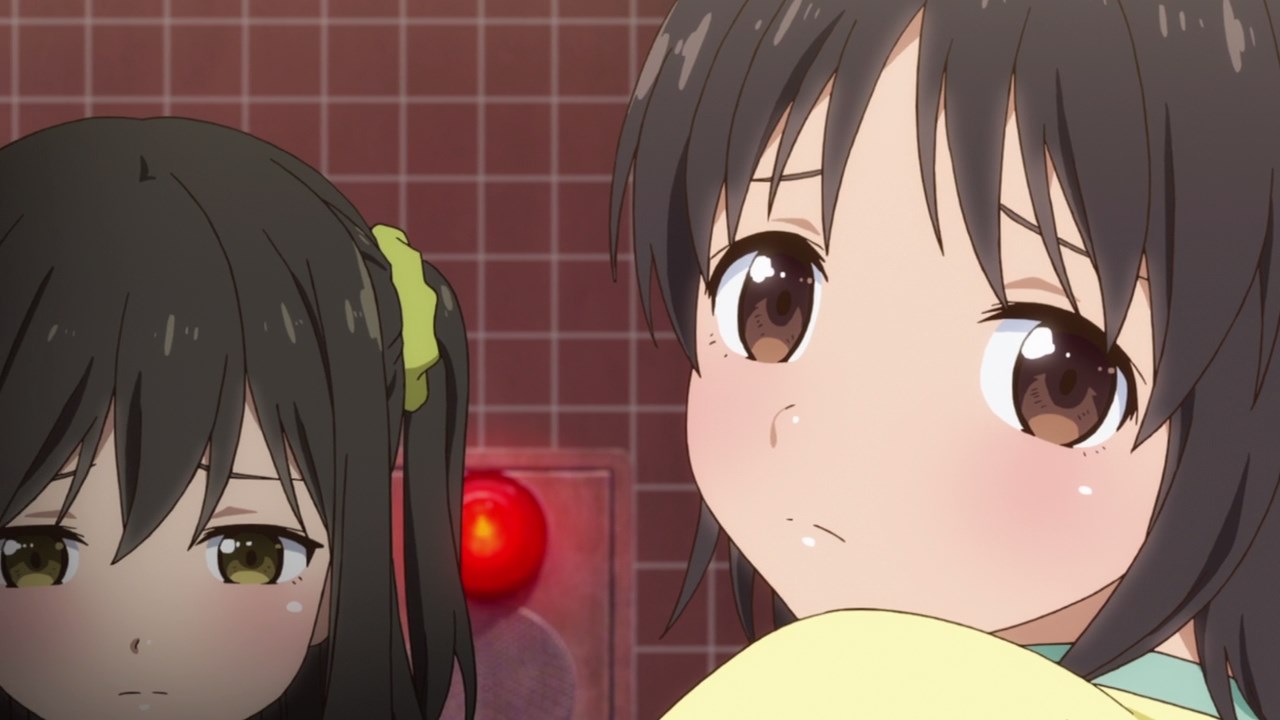 Oh, it’s none other than Izumi Hinazaki where it turns out that she ran away after some disagreements with Hirokazu Takezaki. Man, I feel bad for Izumi but more importantly, she shouldn’t trust a man who lost his way.

Anyways, looks like the situation is getting worse for Alice in Theater and while they’re struggling to compete against Super Material Theater, I’m worried about Miki (or Alice) as she might lose control and cause hallucinations to everyone. With that said, tune in next time!