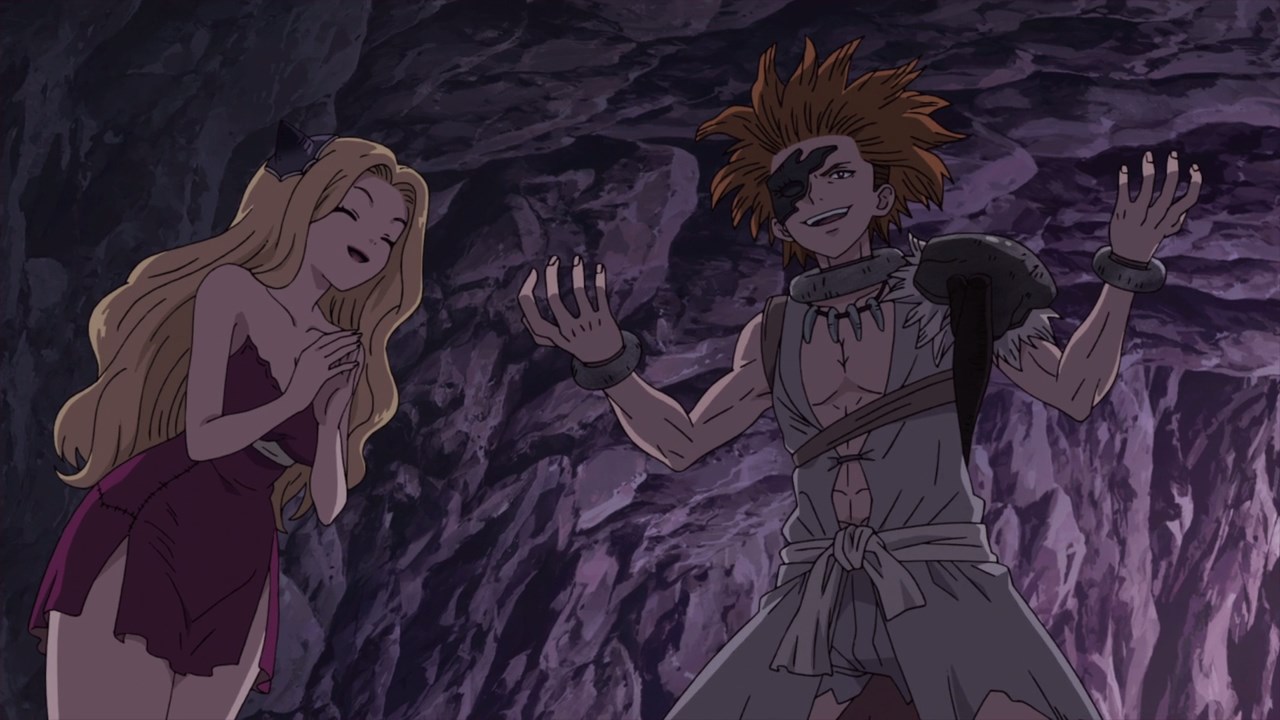 Oh look, Tsukasa Shishio got 2 allies who will help him on crushing Senku and the rest of the Ishigami village.

You have Minami Hokutouzai, a reporter who can find suitable people for Tsukasa’s Empire of Might. And there’s Yo Uei, a vigilante cop who punishes anyone with his own brutal brand of justice. 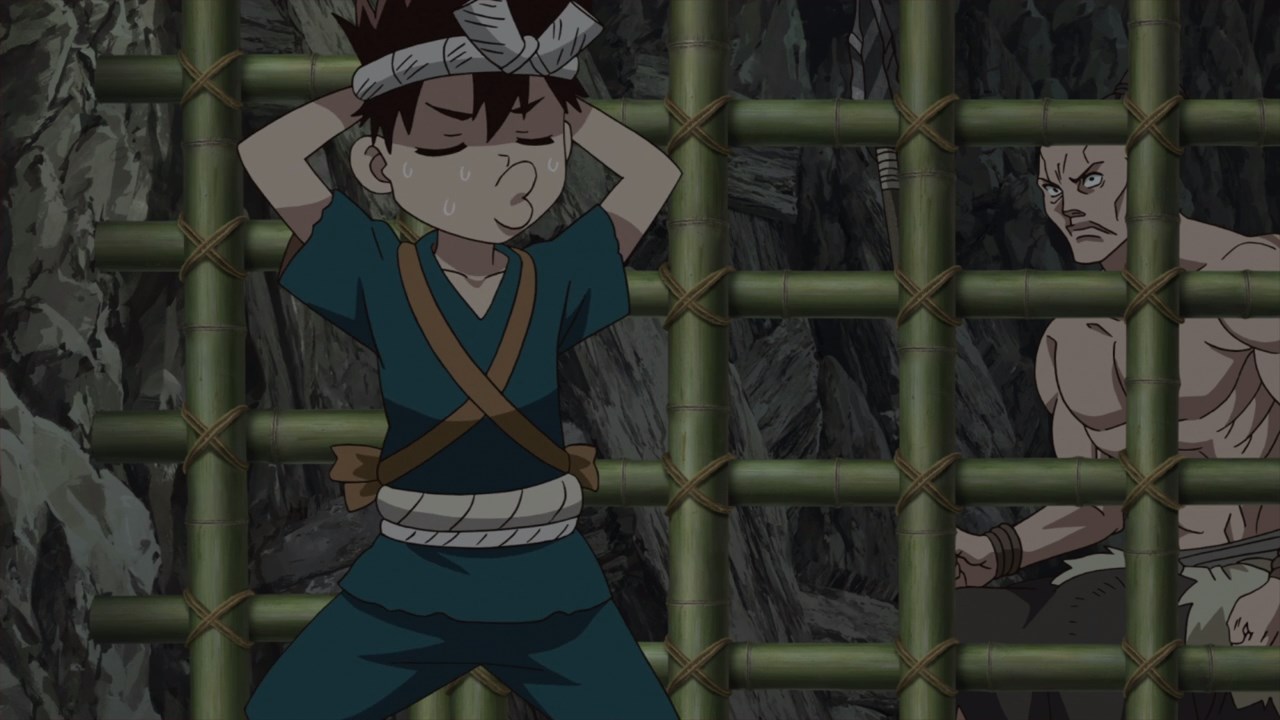 Now then, here’s Chrome where he’s still in his prison cell, although he needs to get out as soon as possible and tell Senku about Tsukasa’s devious trap set to him. 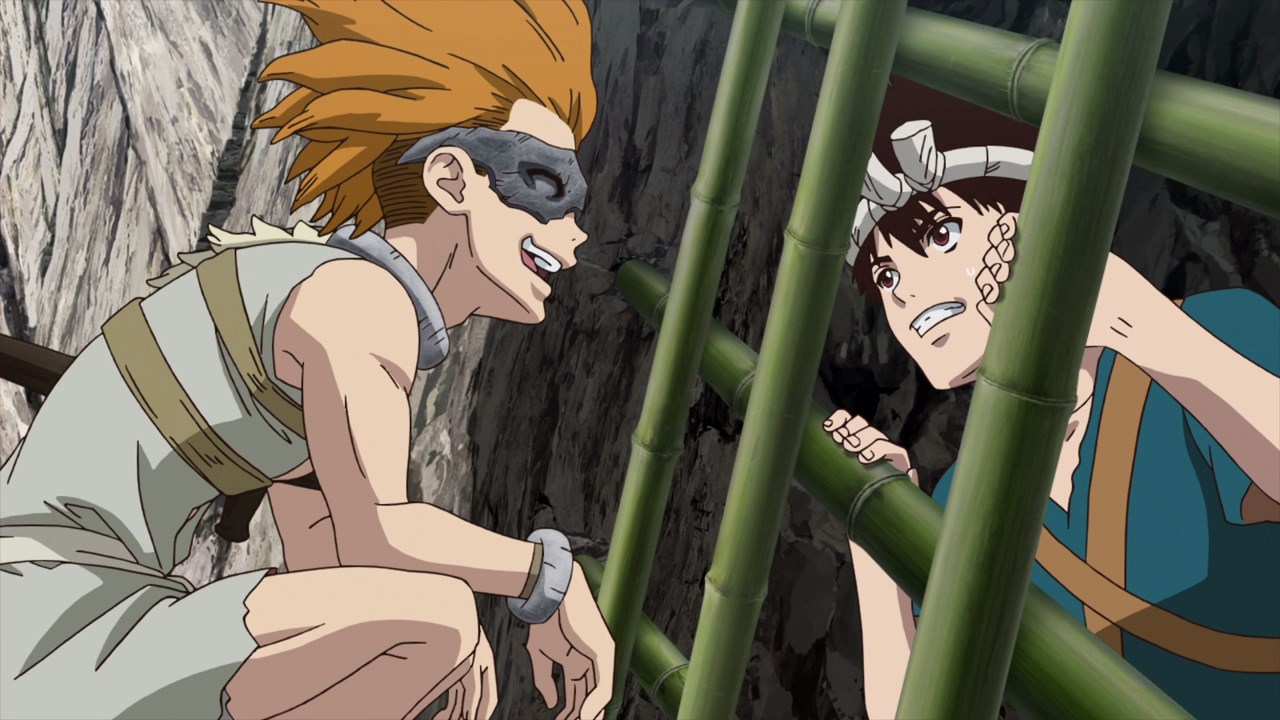 Of course, there’s Yo Uei where he mocked Chrome for being a primitive who doesn’t know anything about modern science. Oh really Yo-kun, you shouldn’t underestimate Chrome ’cause he learned everything from Senku. 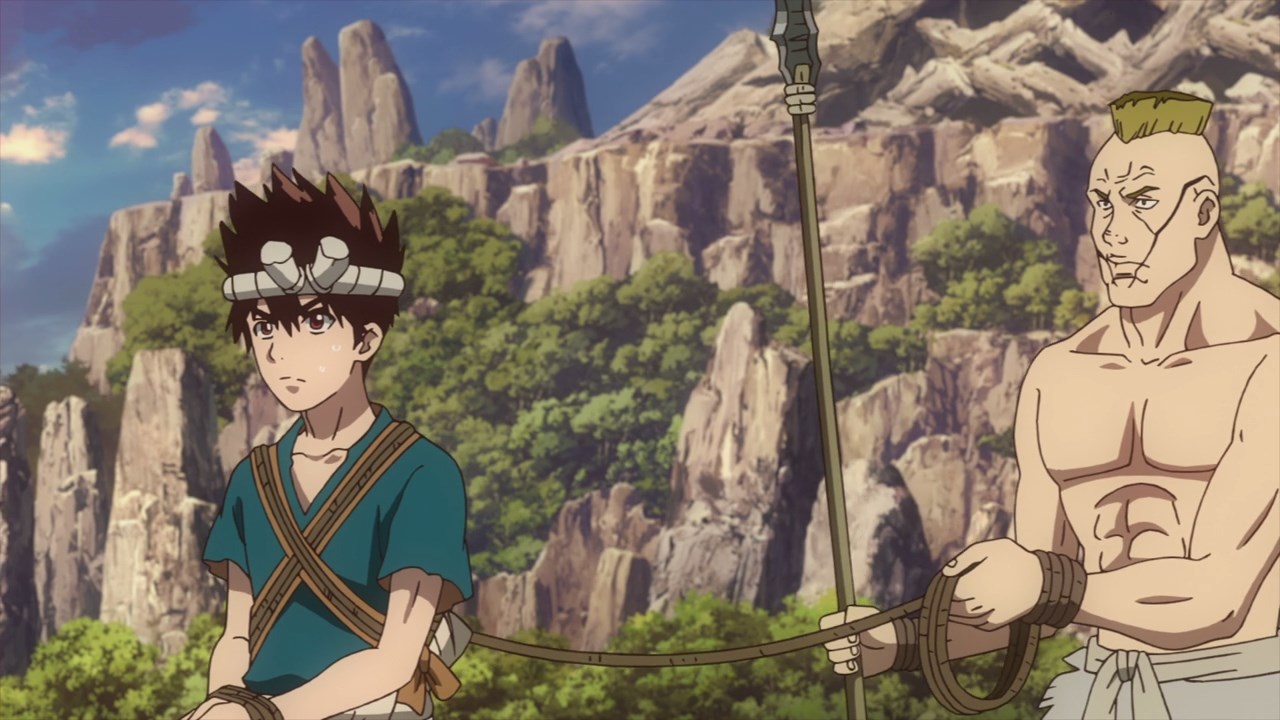 But speaking of Chrome, he needs to act fast as he gather various items for his escape.

Of course, he needs to fool the guards in order to get those items, like asking them to let him out in order to pee. 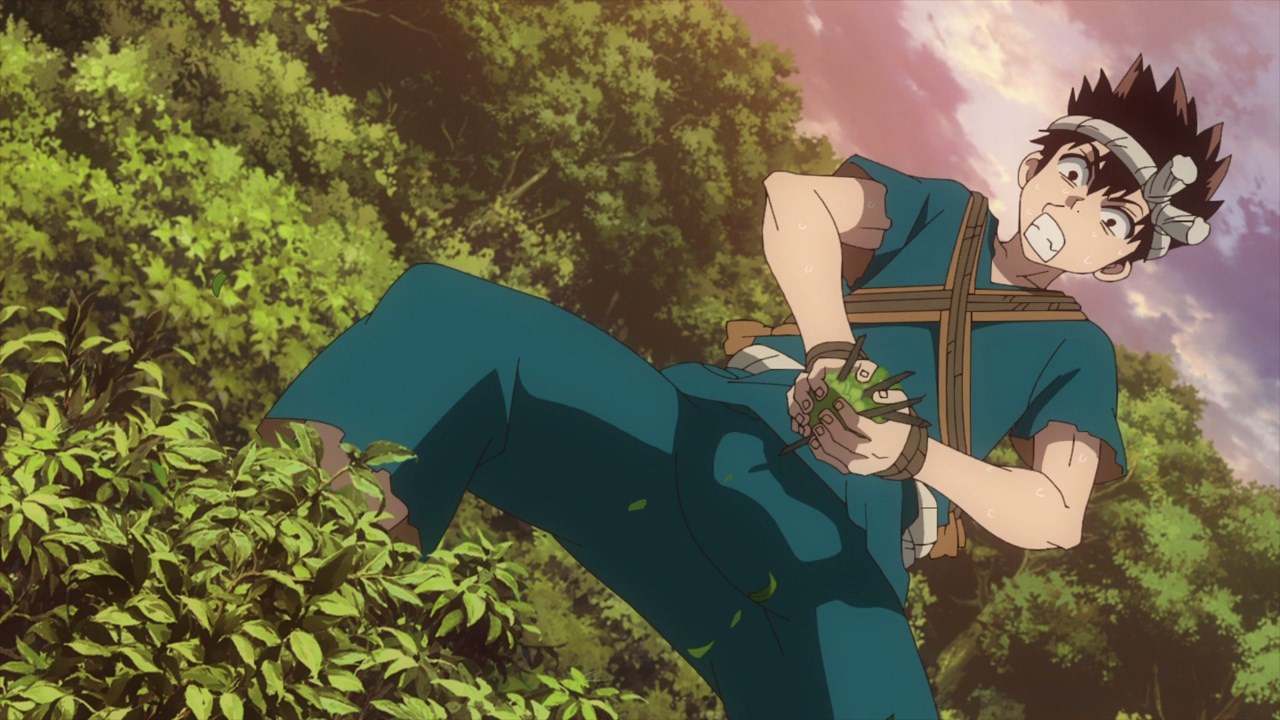 And once he got outside to relieve himself, Chrome put everything he finds to his pants. Doesn’t matter if it’s herbs or twigs as long as Chrome can make his escape.

Then again, I feel that most of the items he find are not useful for busting out his prison cell. If only Chrome got a spare battery… 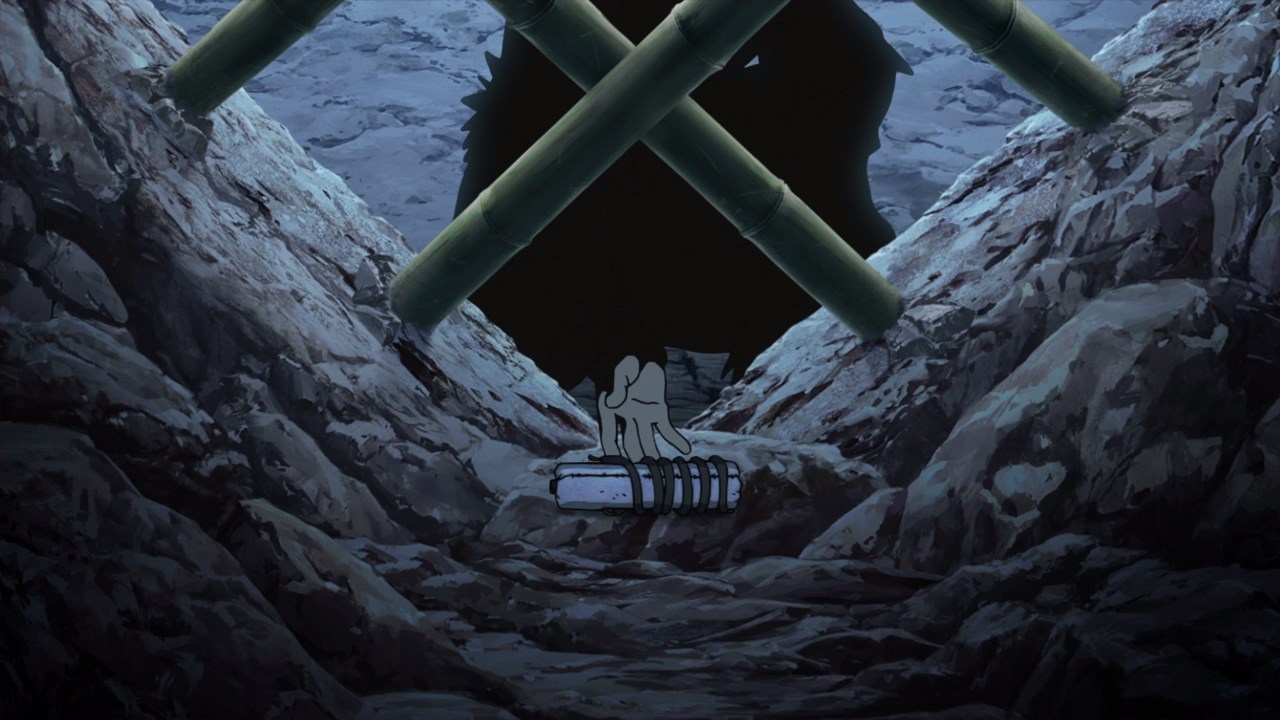 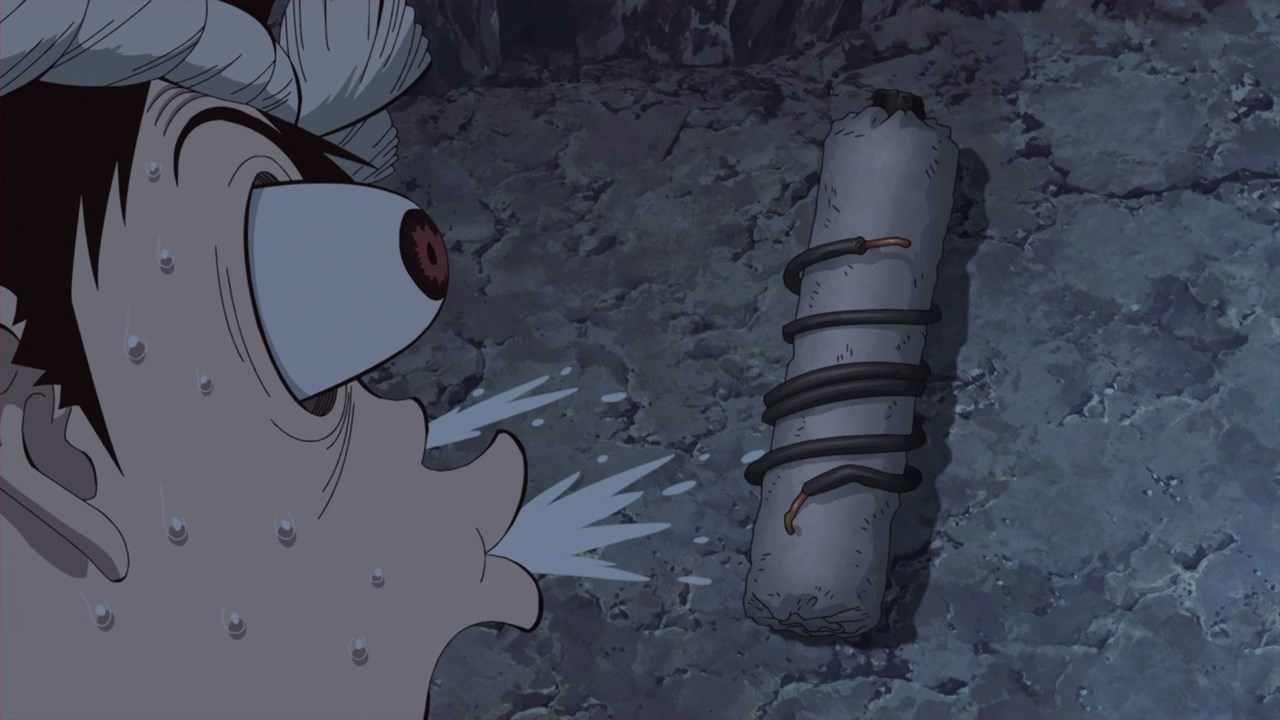 Well, it appears that a mysterious helper gave a spare battery to Chrome in which he’s shocked to see it. Um Chrome, you have to be quiet if you want to get out of here. 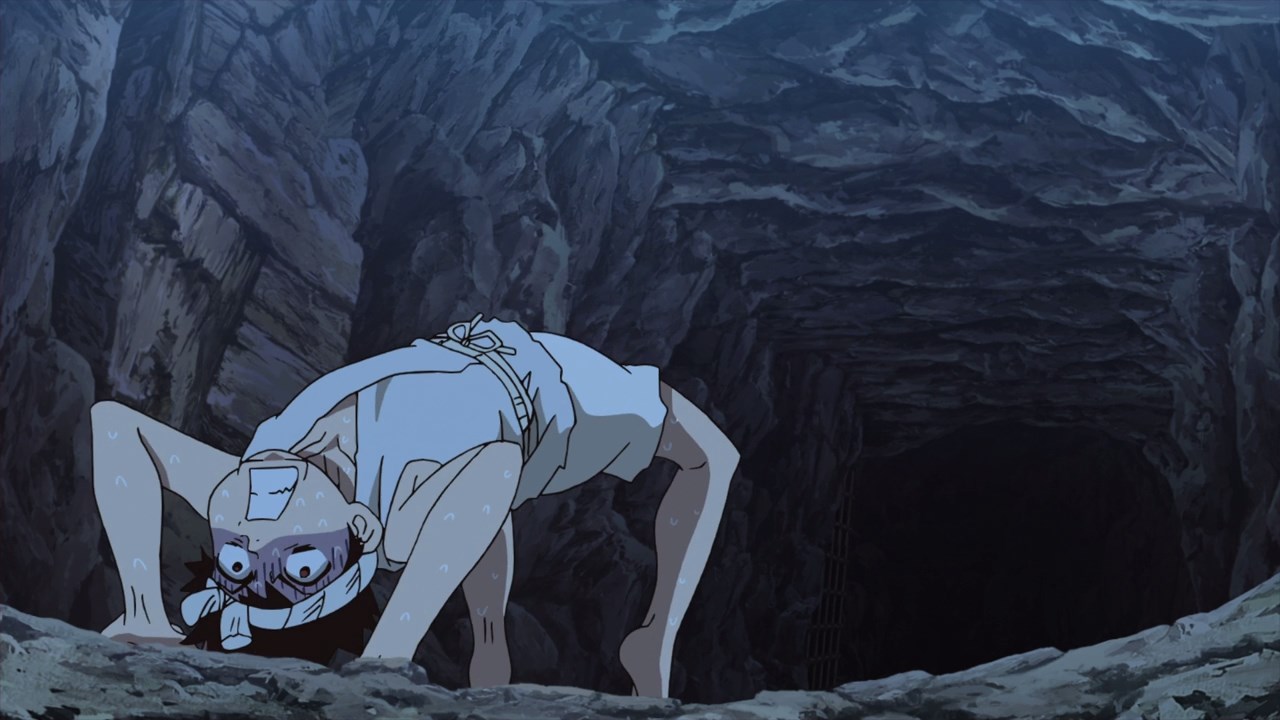 Now that he got a spare battery, it’s time for Chrome to do… pushups and other strenuous exercises?

Okay Chrome, I don’t know what you’re planning but I hope that you can get out of your cell. 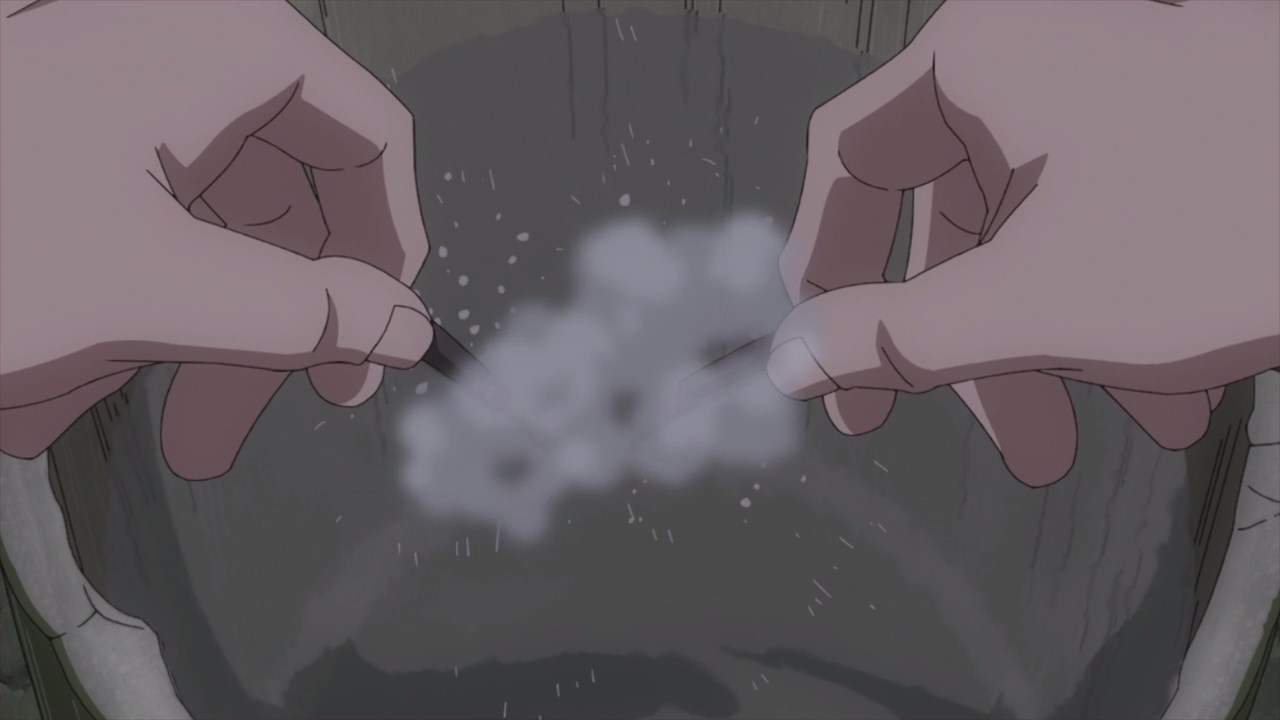 Anyways, turns out that he’s working out in order to collect some sweat. Add some electricity using a spare battery and this cup of sweat has transformed into sodium hydroxide. 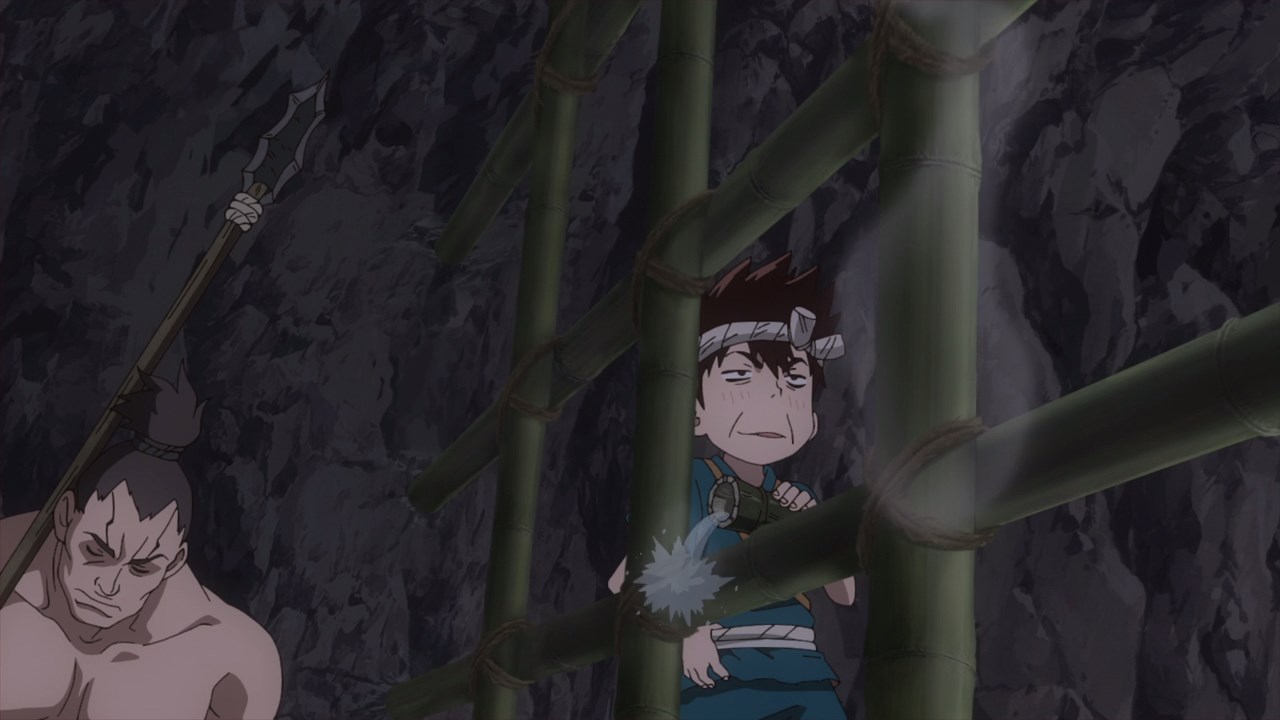 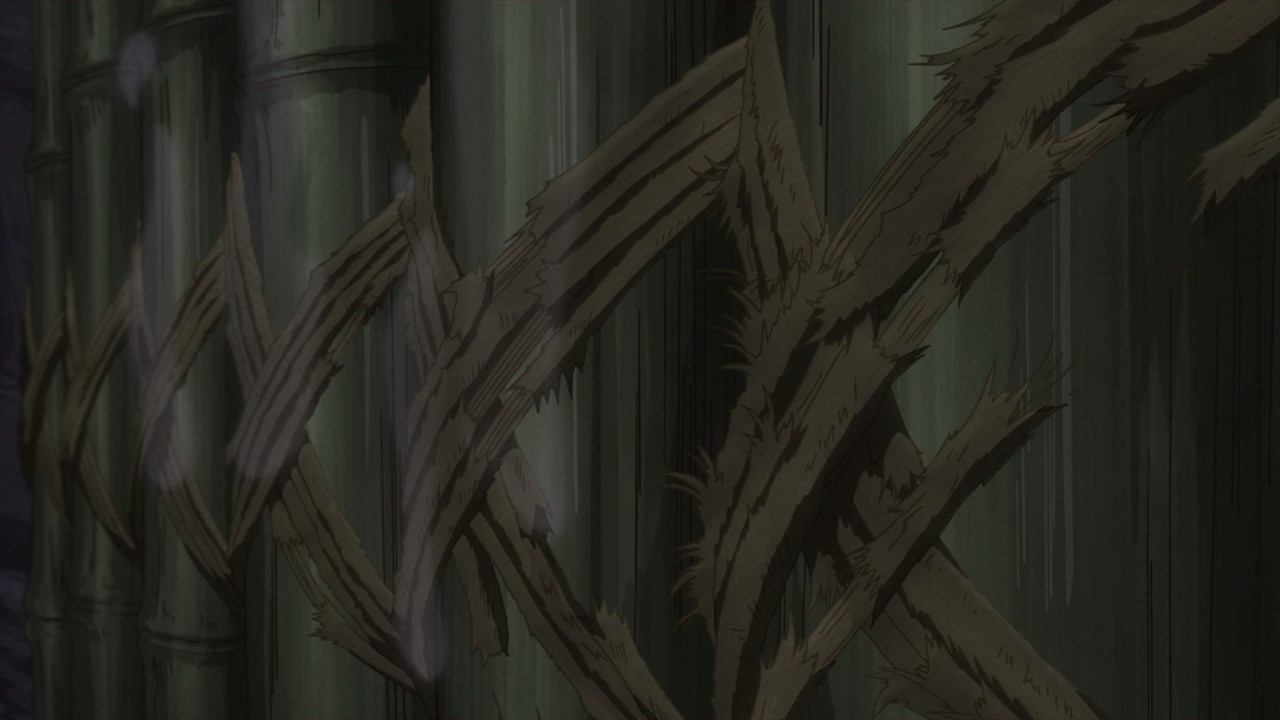 Now he can use sodium hydroxide to melt the ropes that hold the bamboo bars just by pouring it in. Glad that Chrome used everything he learned from Senku to save himself. 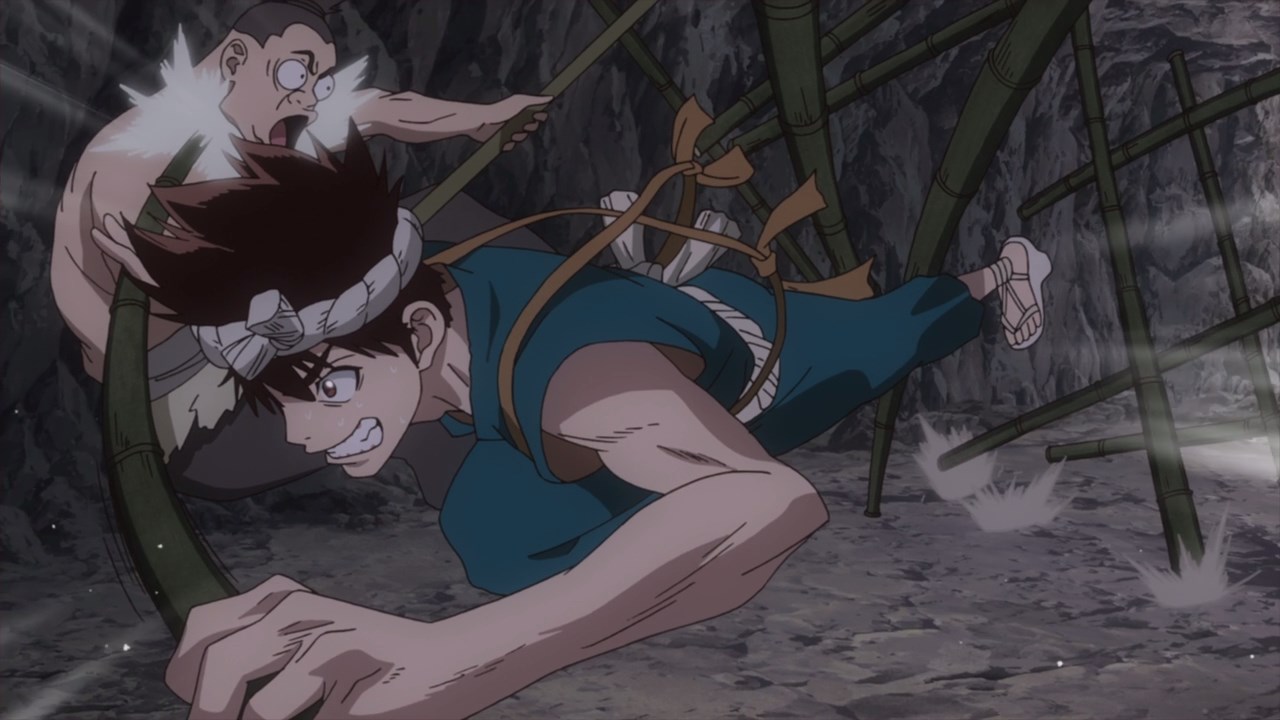 Anyways, now comes the fun part where Chrome gets out of prison and evade the guards. 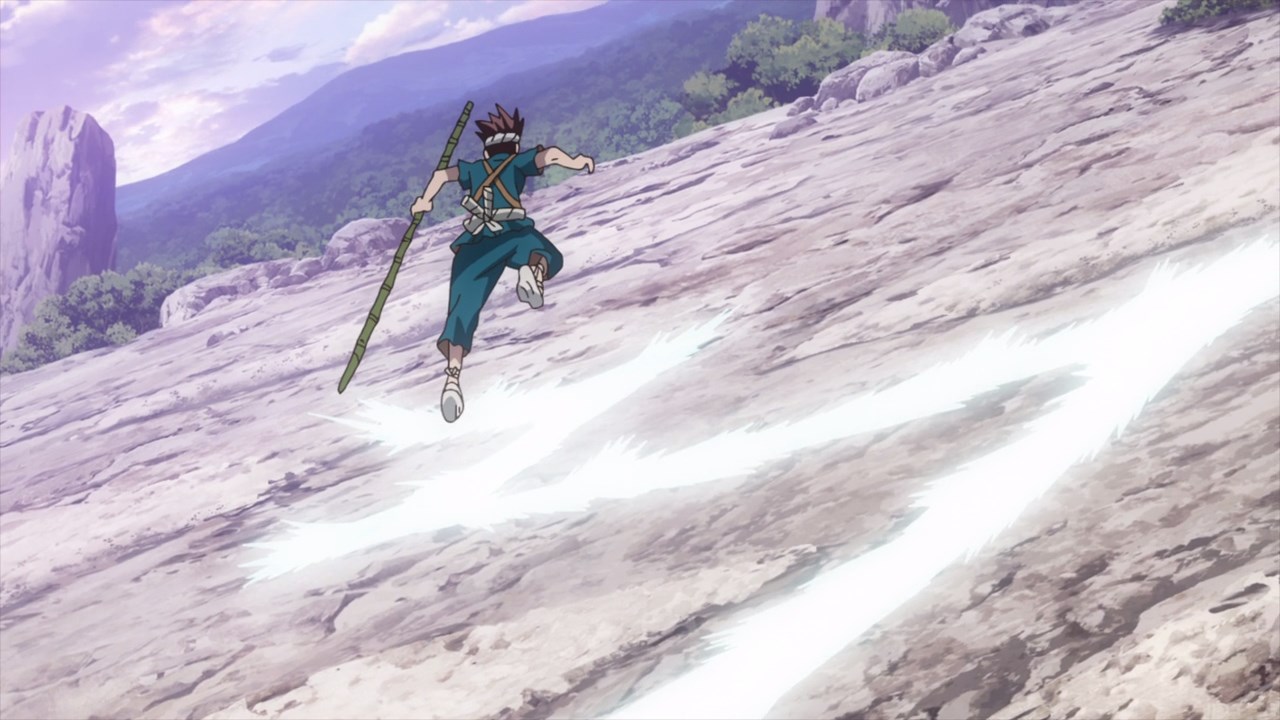 Oh, and let’s not forget about those traps as Chrome easily dodges them. Come to think of it, is he the second coming of Sena Kobayakawa from Eyeshield 21? 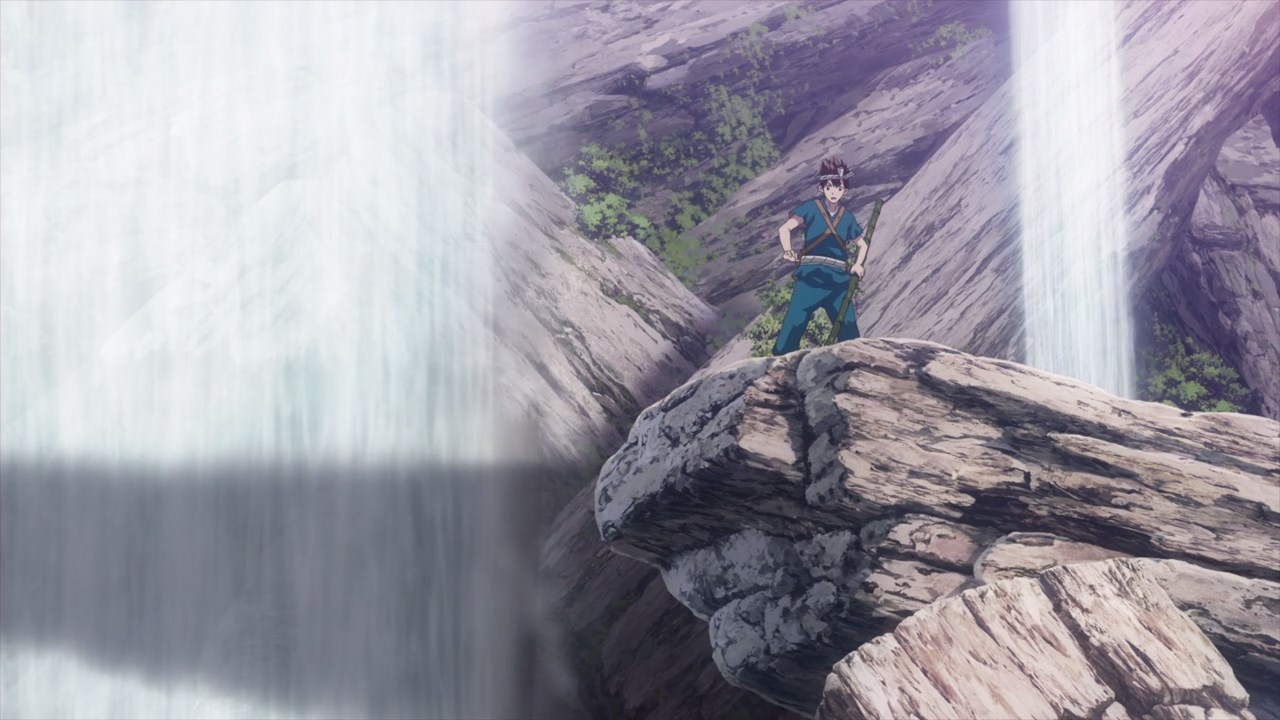 Unfortunately, Chrome reached a dead end as he’s stuck at the edge of a cliff. One wrong move and he’ll fell down to the waterfall below. 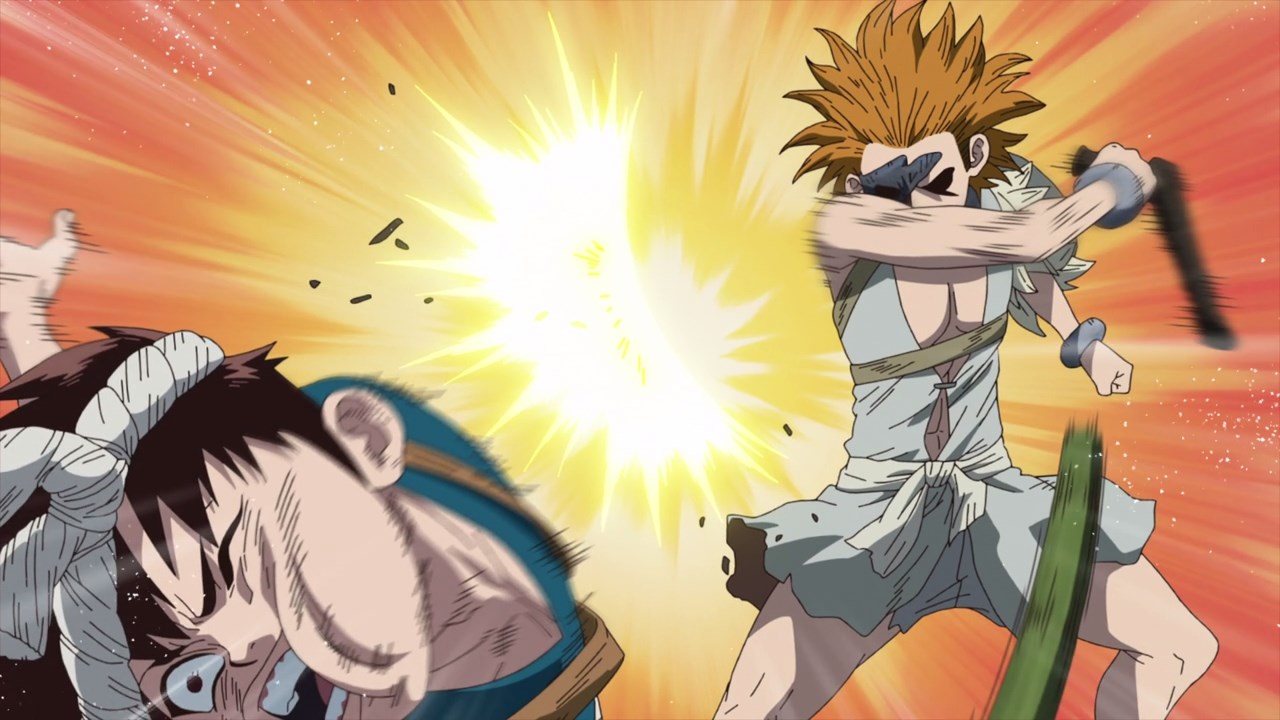 Oh, and Yo Uei managed to caught up with Chrome as the enforcer whacked him with his baton. Geez Yo-kun, you’re committing police brutality in this stone world! 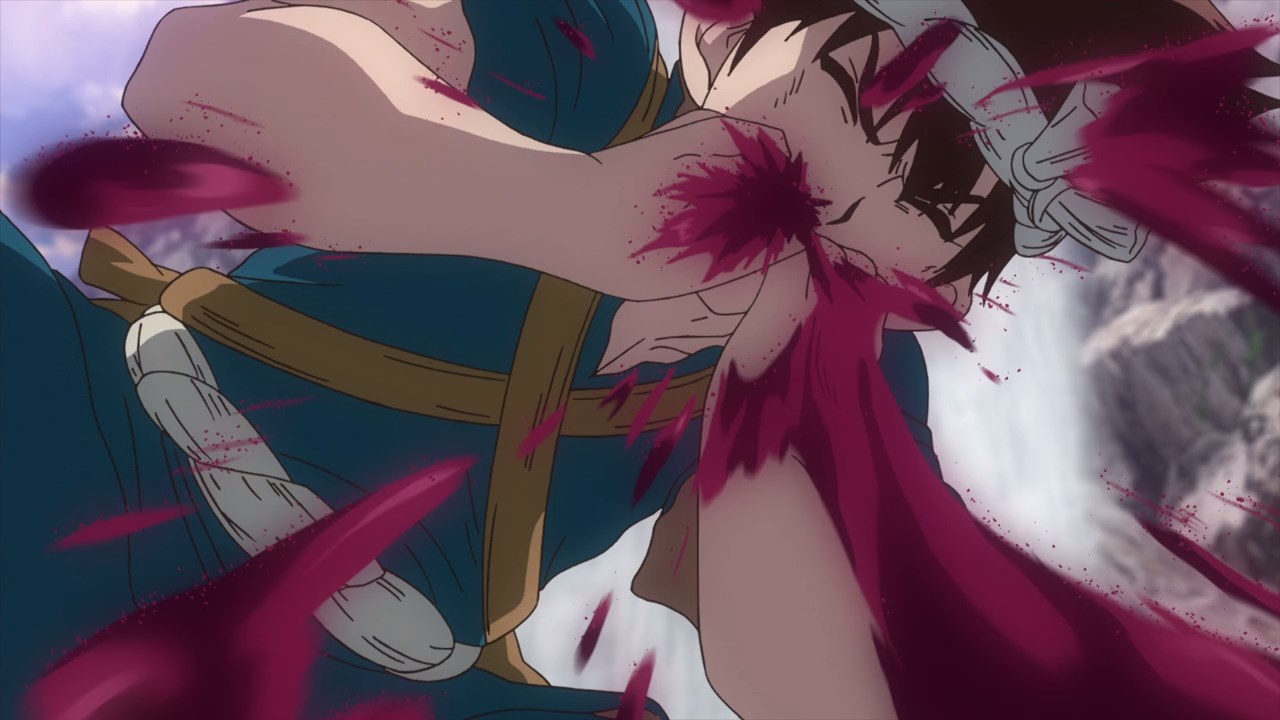 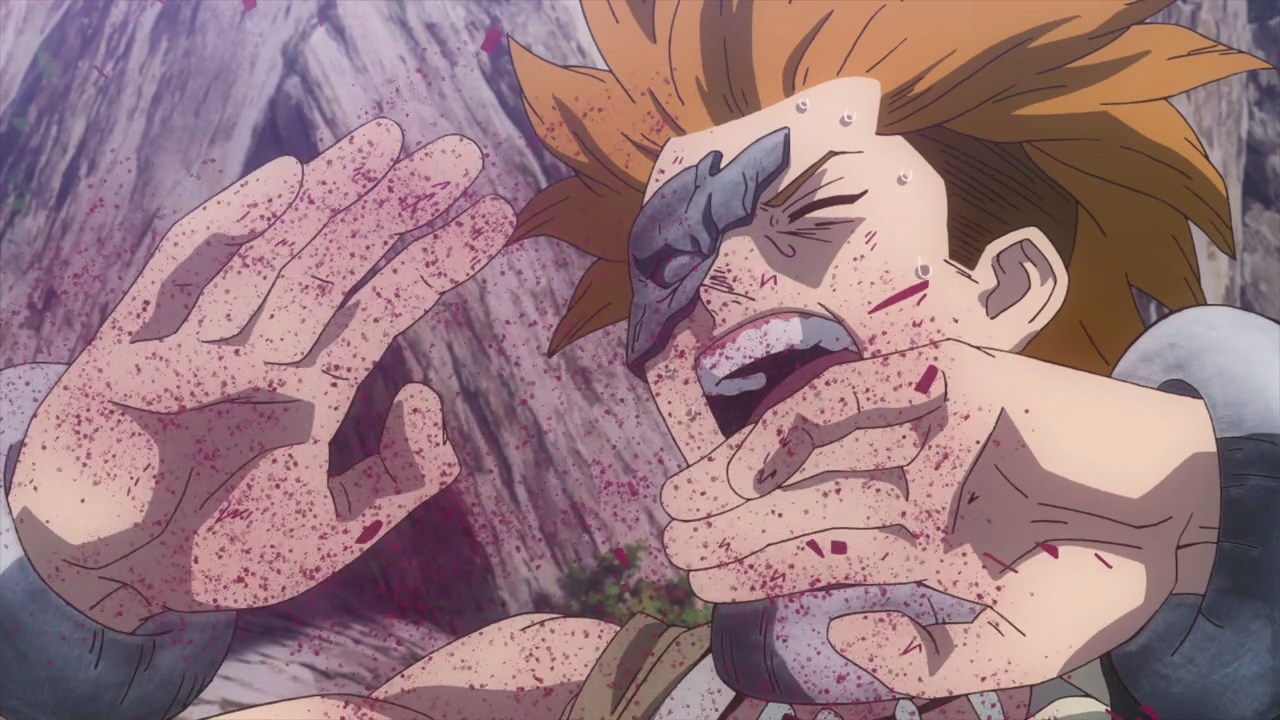 Oh yeah, and it’s contagious as Yo Uei got sprayed by Chrome’s blood. This is bad as the Empire of Might will have a pandemic soon enough now that Yo got caught by pneumonia. 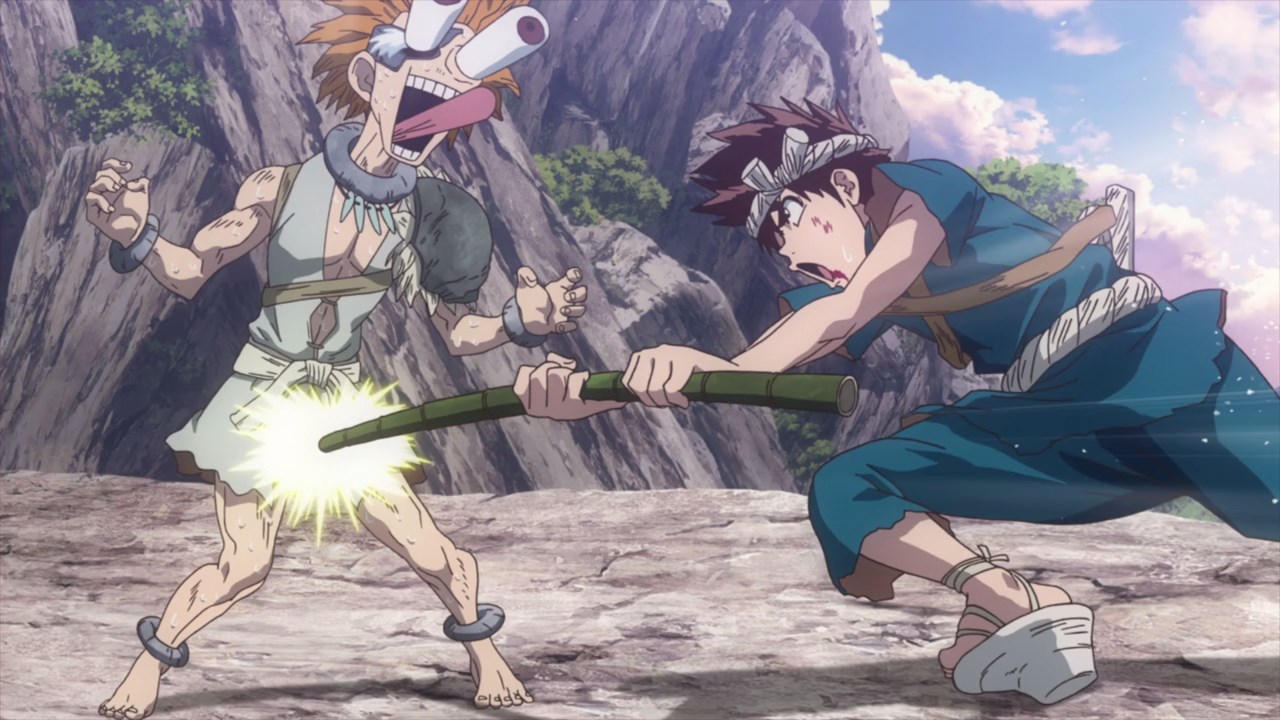 Just kidding, Chrome is actually coughing up fake blood in which he really fooled the hell out of Yo Uei. Also, Chrome managed to hit Yo-kun in the crotch as he finally escape the Empire of Might.

Well Yo-kun, you shouldn’t underestimate Chrome but seriously though, I wonder if Ukyo Saionji is the one who gave the battery to Chrome? 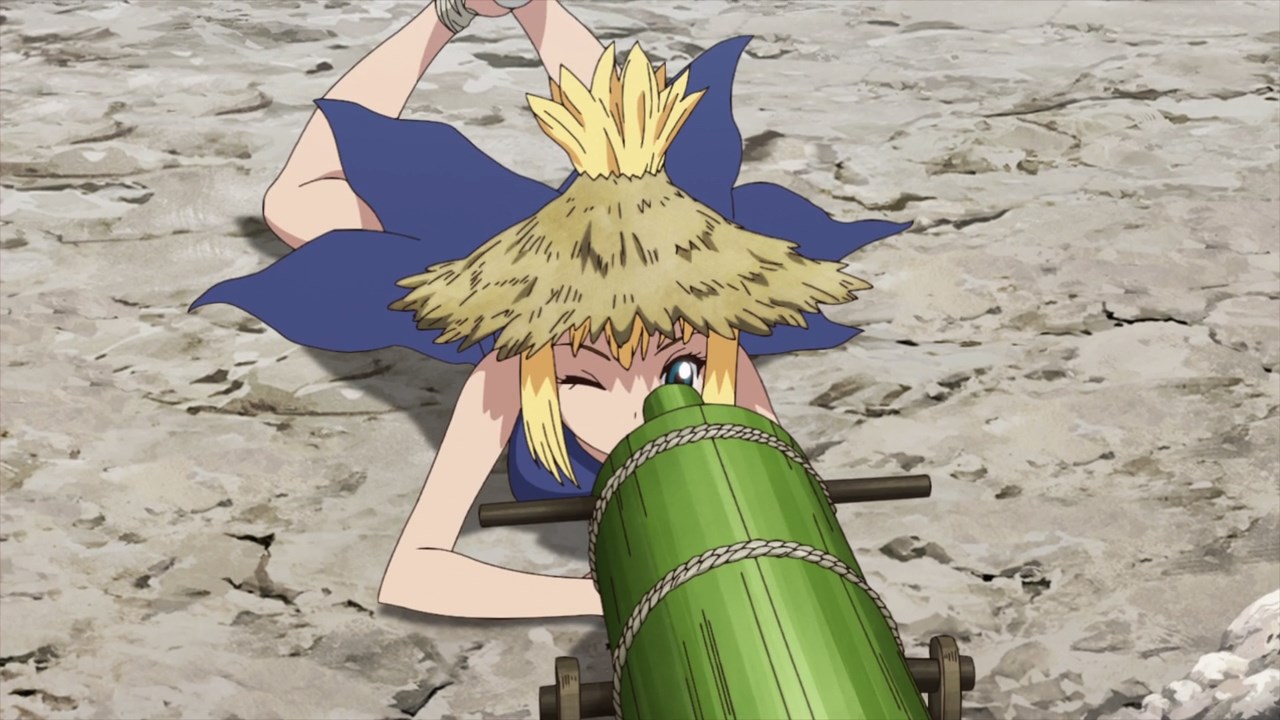 Now then, here’s Kohaku where she’s currently observing the Empire of Might’s actions via her telescope. C’mon, she needs to be on the lookout should Tsukasa and his army decides to move out. 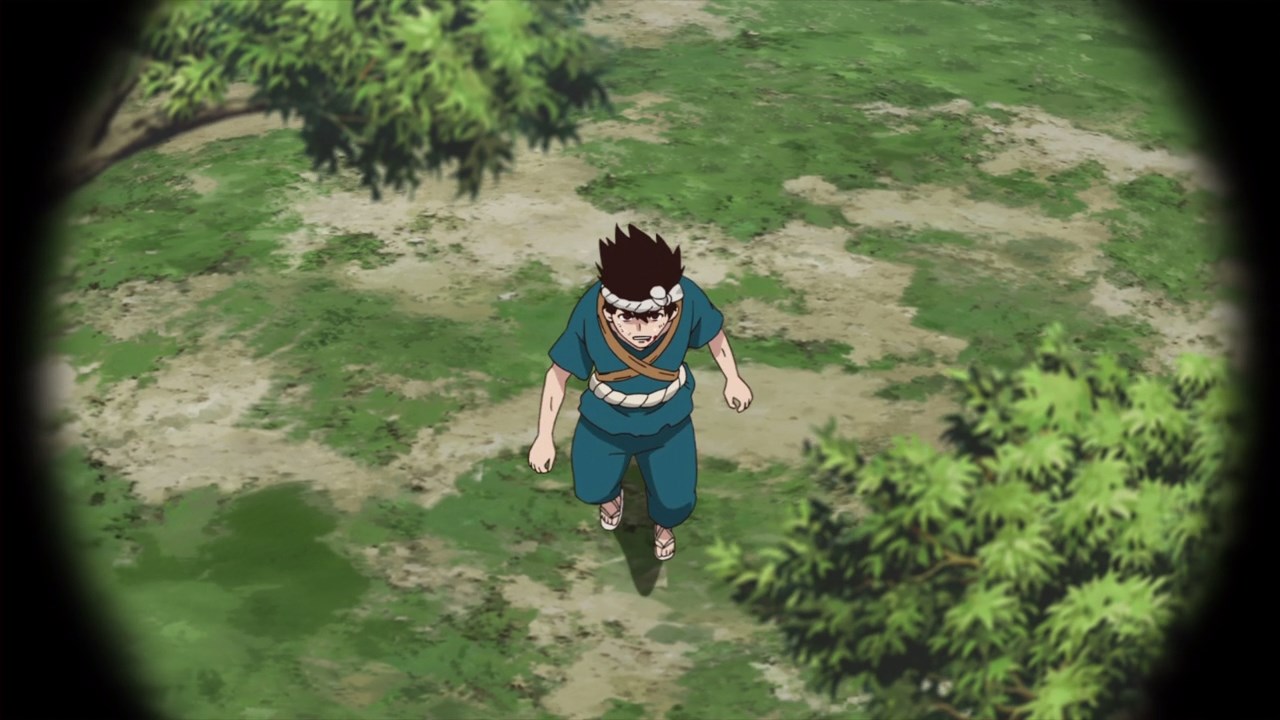 That’s until Kohaku saw Chrome as he head towards Senku’s campsite. Glad that he finally escaped instead of being treated as bait. 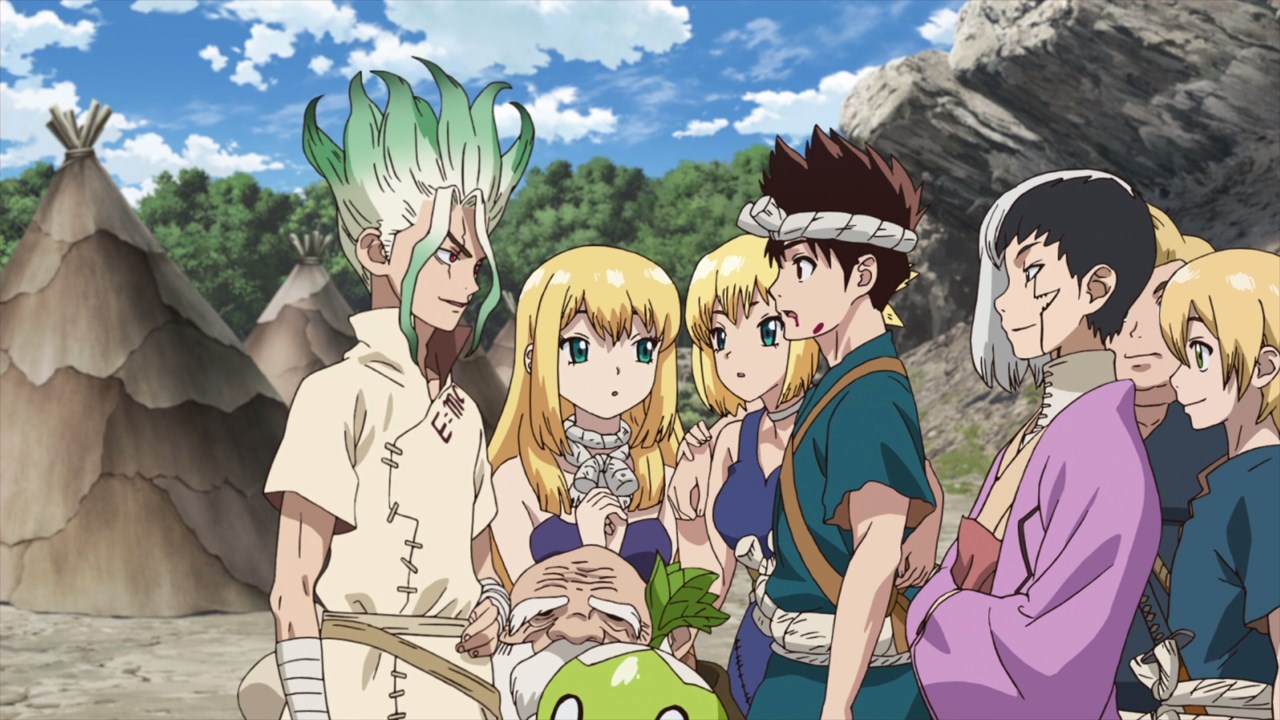 Of course, Senku is really impressed by using herbs to create fake blood, as well as using a spare battery and some sweat to create sodium hydroxide.

Now, the only thing left to do is for Chrome to tell Senku about Tsukasa’s plan. Of course, Shishio will try to change it in order to be one step ahead of his rival. In any case, see ya next time!