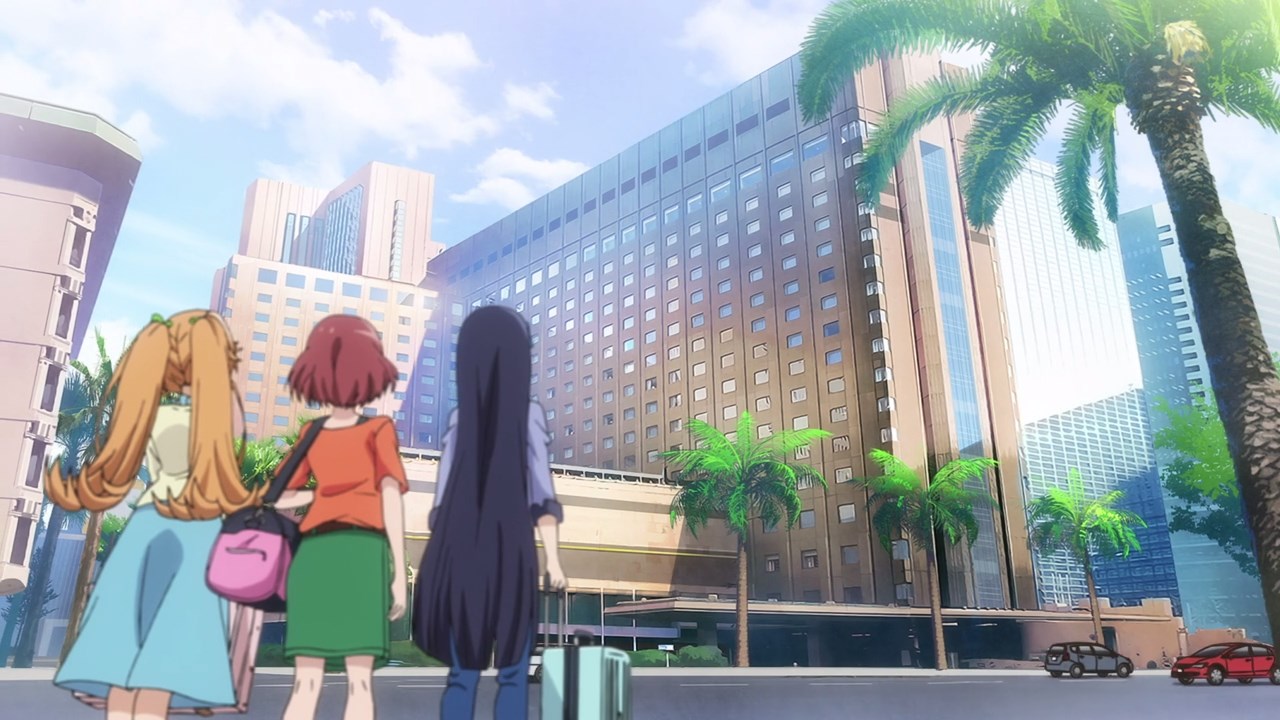 Hey everyone, it’s gonna be a breather episode where Hirana Asu and her friends will stay at Greatest Hotel YTG, a 3-star hotel that was owned by an influential family. 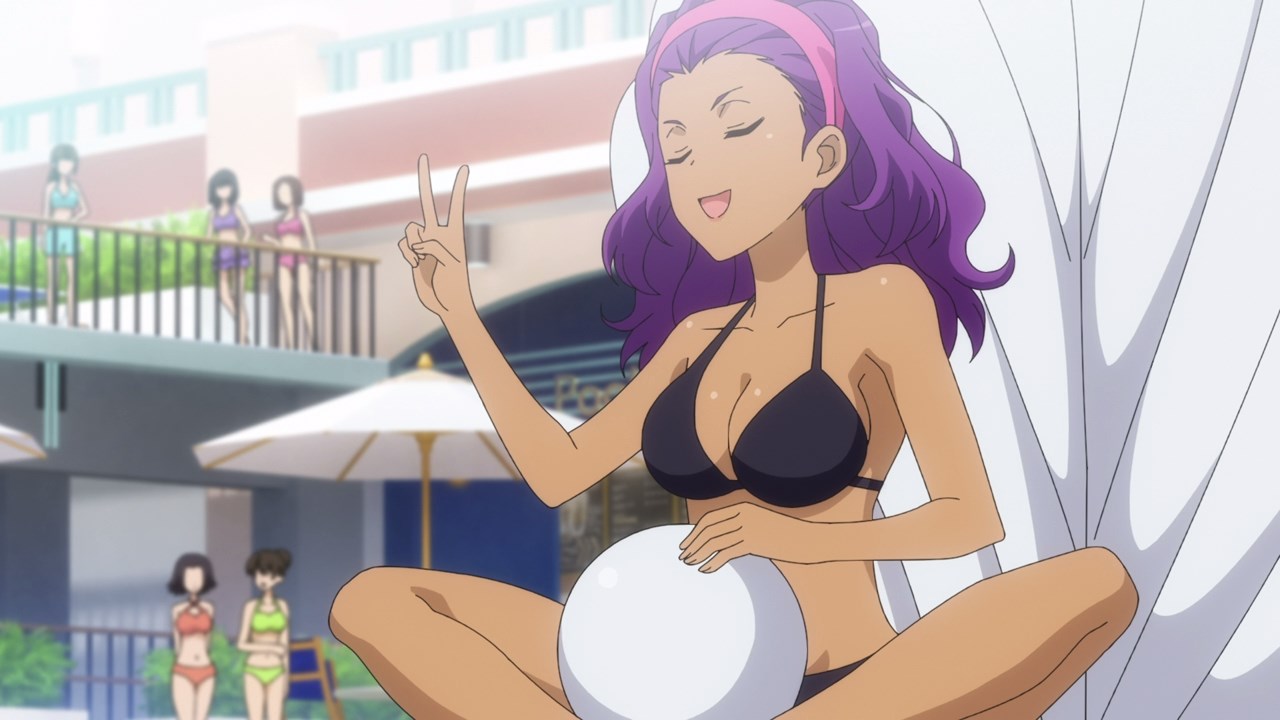 Said family happened to be the Yotogi clan where Mujika Yotogi welcomed her guest at her lovely hotel.

Oh yeah, Diagram will have a Diva Battle against some jobber team called Kyuru Kyurun, where Mikomiko and her teammates are on the brink of being demoted to D Class. You know what, Muzica’s diva unit will have an easy win. 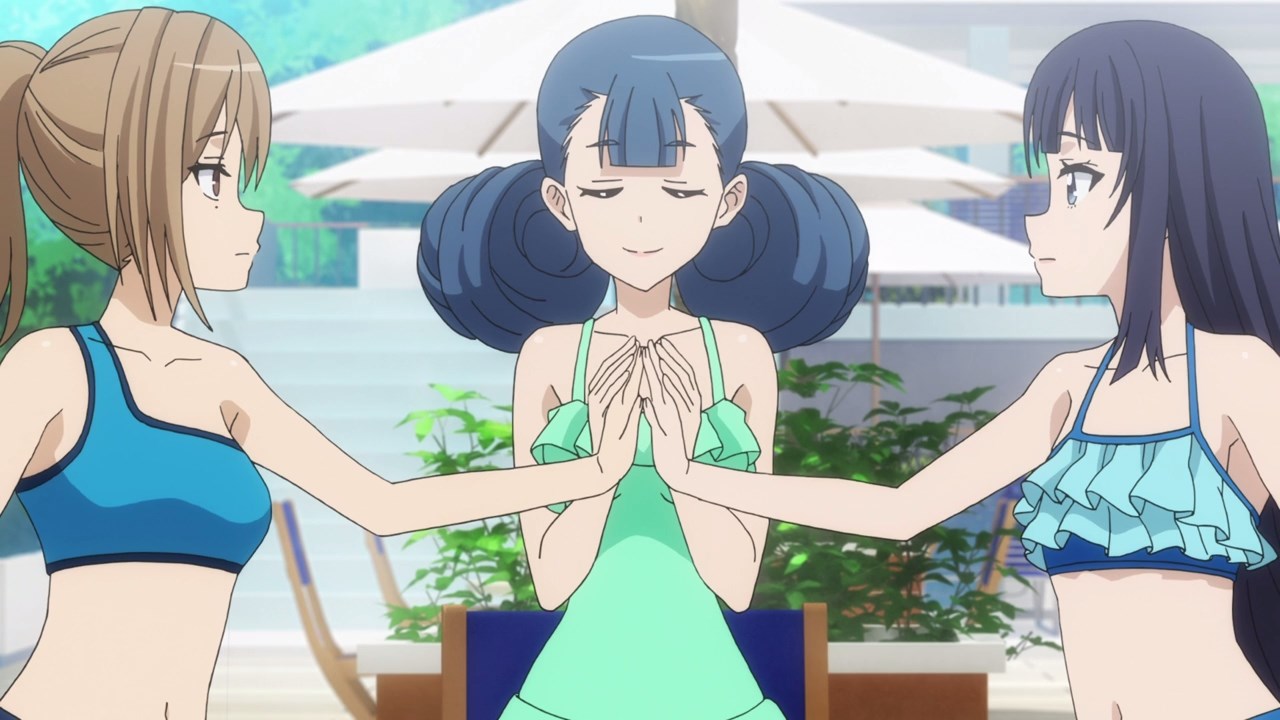 Meanwhile, looks like Rei Sakigake is reconciling even further towards her former teammates and while Madoka Maka forgive Rei, there’s Sanga Shinonome where she’s still bitter towards Sakigake.

You know what, I’m hoping that they’ll remain friends instead of being enemies. I mean, Sanga might attempt to kill Rei at any time! 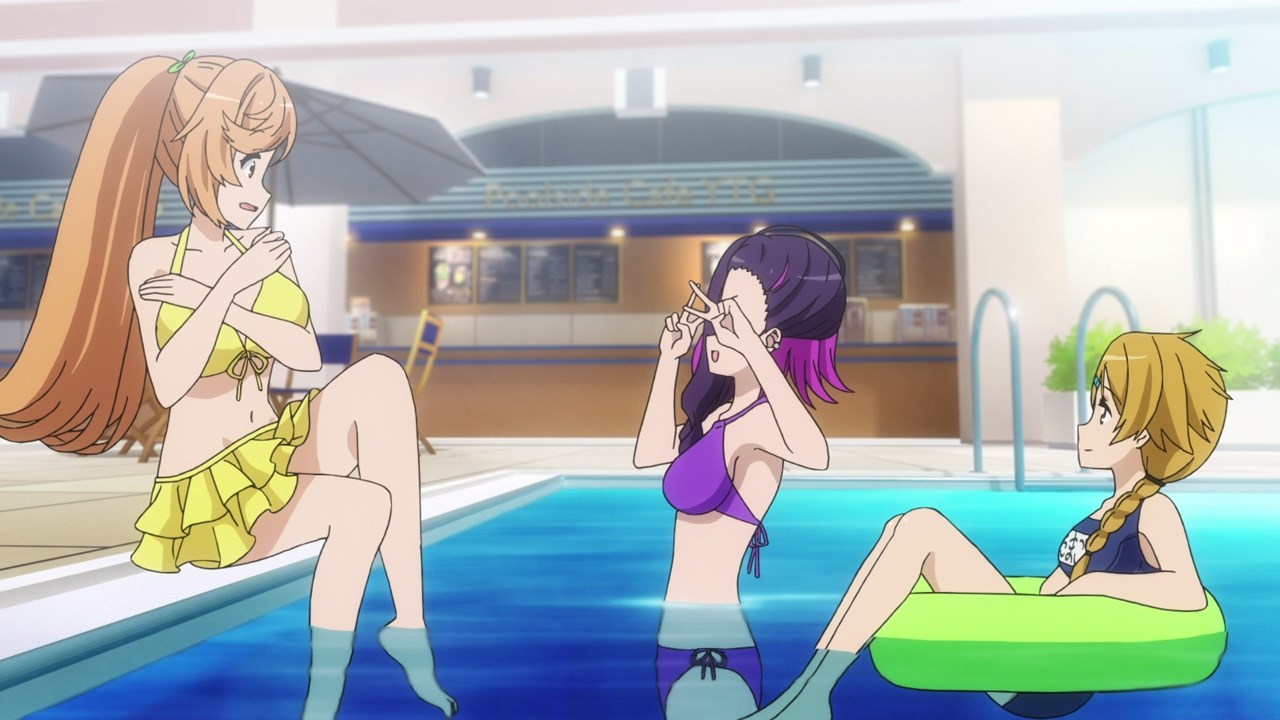 Oh yeah, Uchuu no Hajimari is invited too where Dr. Tamago, Koeru Nobagoshi, and their AI companion Big Bang are happy to see Akino Onko again, although Koeru is amazed by Akino’s breasts. 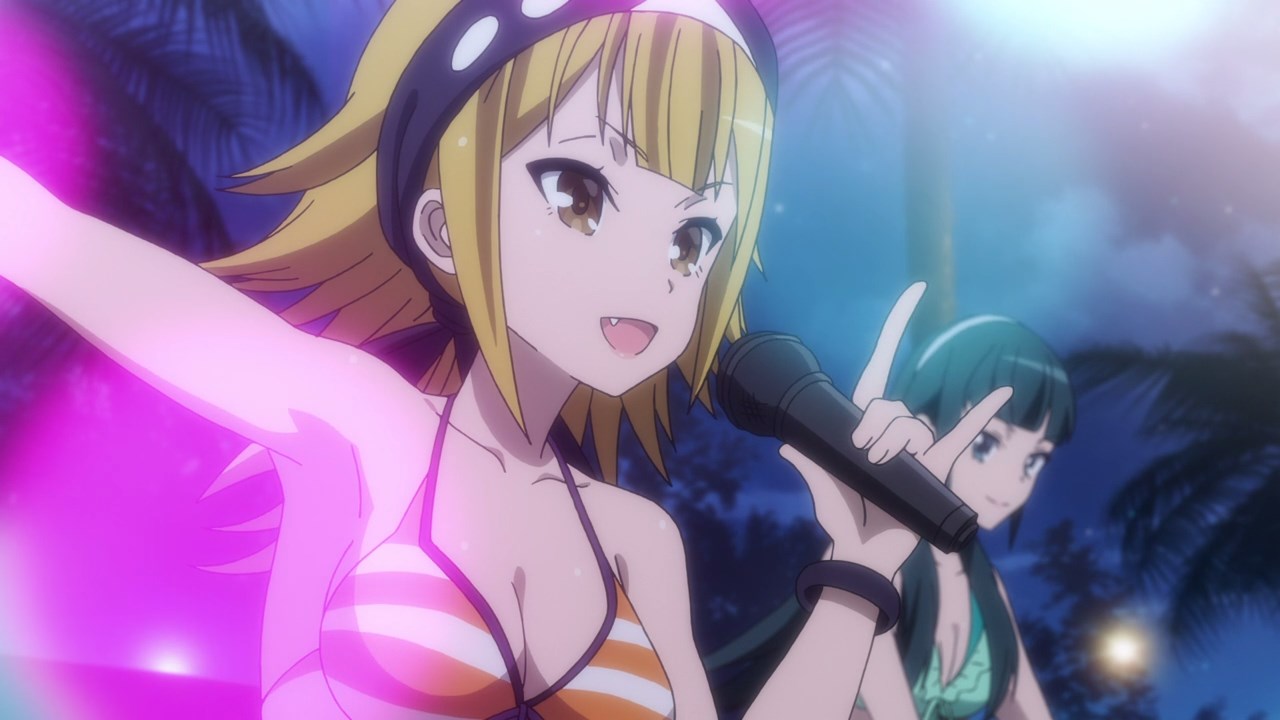 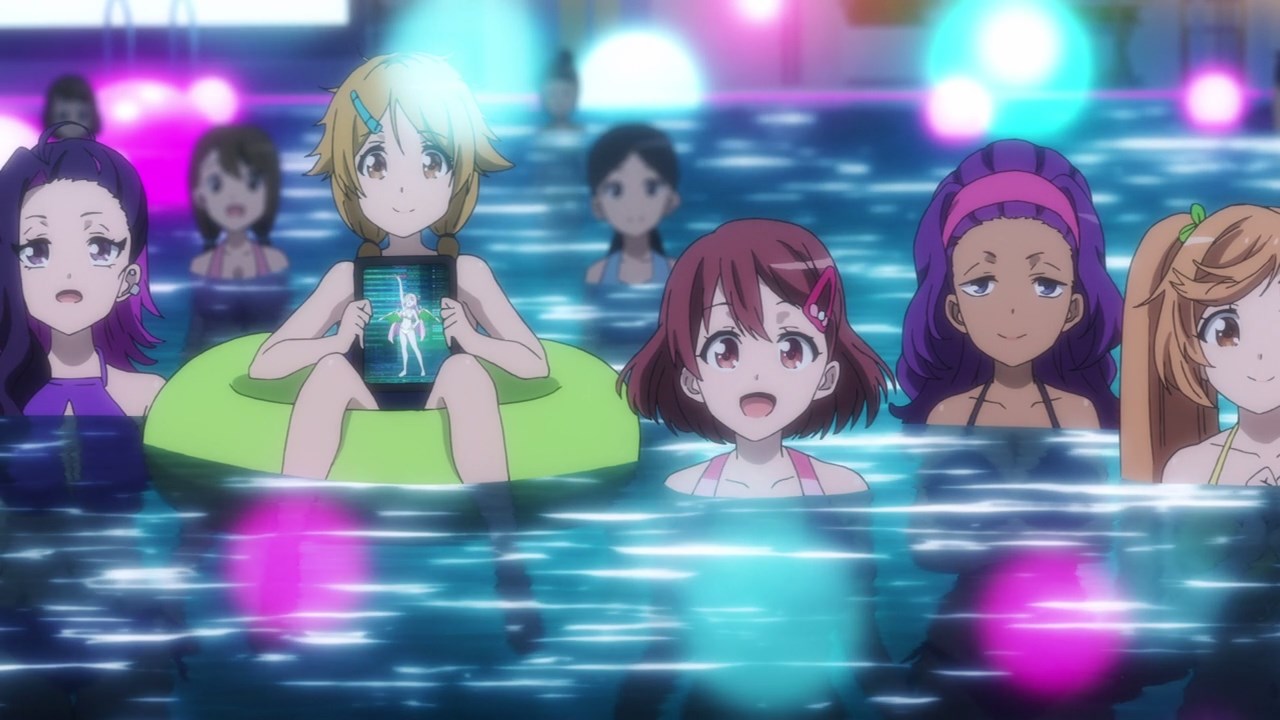 One last thing, Card Jockey is also invited where Nana Nekozawa and her crew are putting a good show. By the way, I wonder if Card Jockey went back to B Class after winning the Futuring Diva tournament?

But speaking of Card Jockey, Nana told everyone that she and her teammates will face Deus Ex Machina someday and become the No. 1 diva unit in WIXOSS Land.

And really, they really need to produce good results now that their producer gave them another chance.

In any case, I hope that Card Jockey will reach the big leagues but I want No Limit to go further.

Unfortunately, it appears that their rest and relaxation at Greatest Hotel YTG was interrupted when someone stole their underwear.

Okay, who would do such a thing despite the fact that this hotel is being guarded by a clan of ninjas (apparently)? 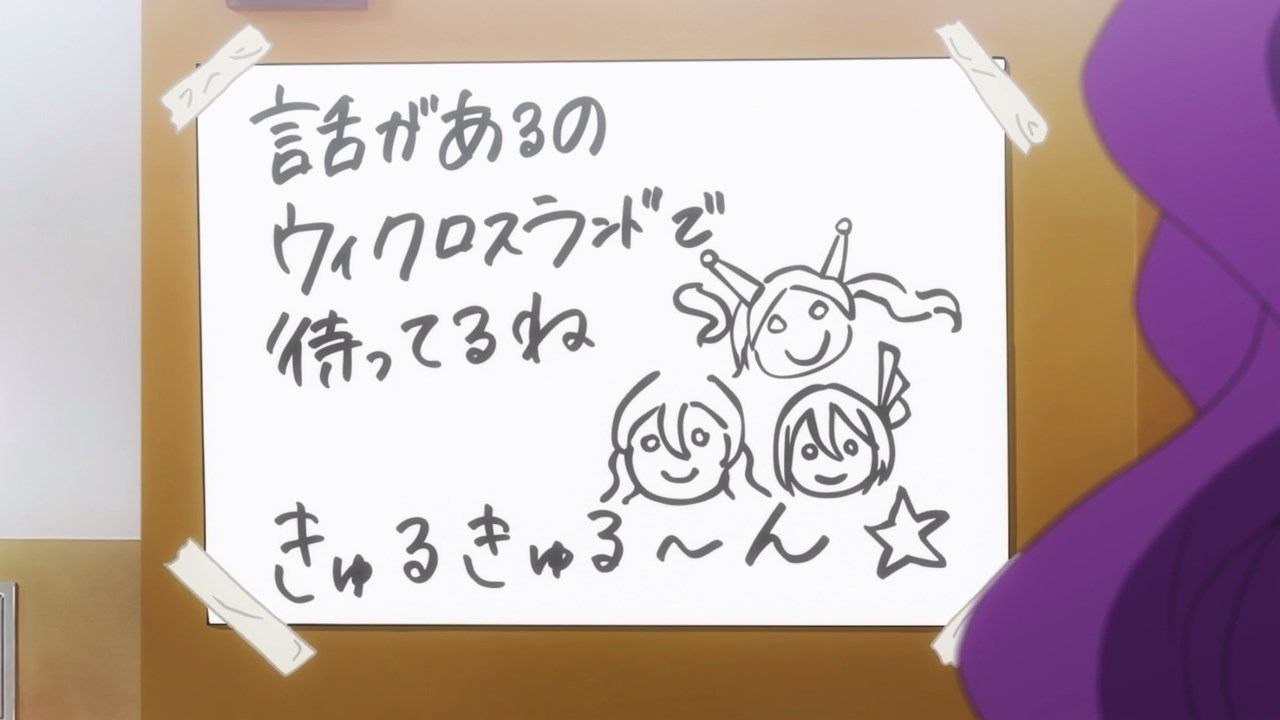 Oh, it’s Kyuru Kyurun where they stole their undies because they don’t want to be treated as a laughing stock anymore. Still, they pulled a scummy move. 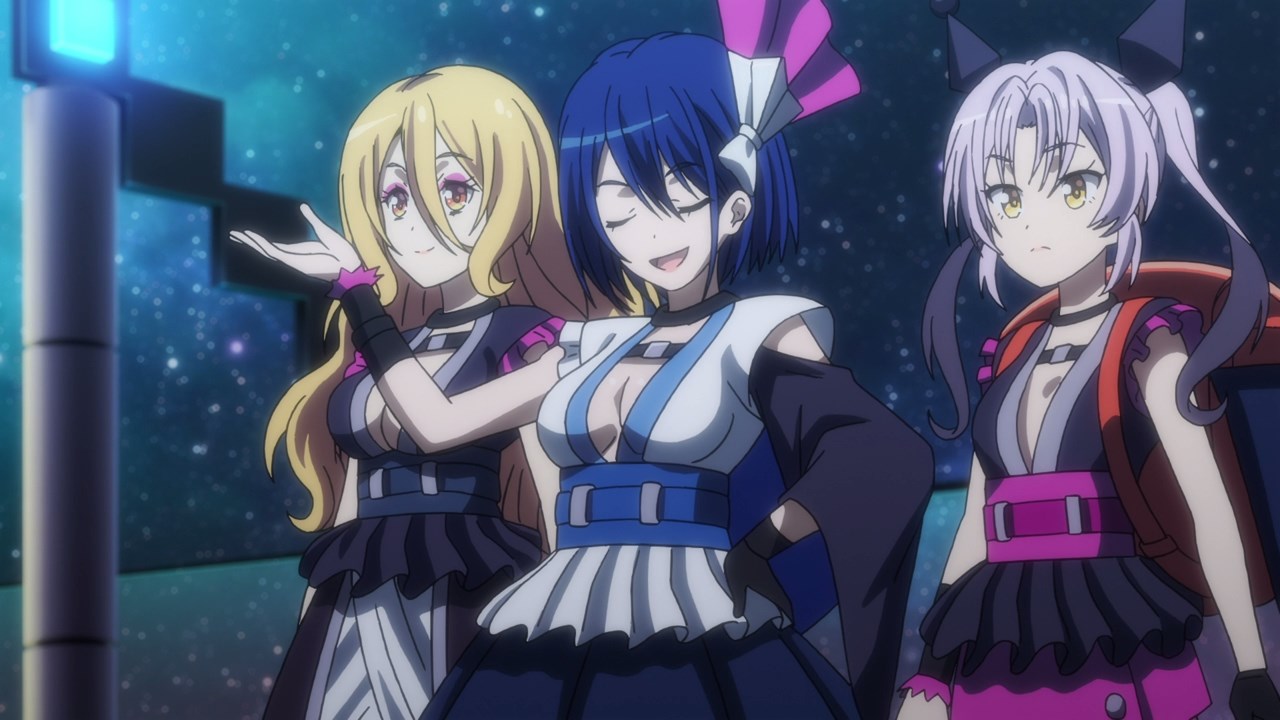 Not only that, but Mikomiko and her buddies will release their naked photos across the internet if they rest won’t do as they say.

Okay, that’s illegal but how did Kyuru Kyurun managed to steal lingerie and took photos without everyone noticing? 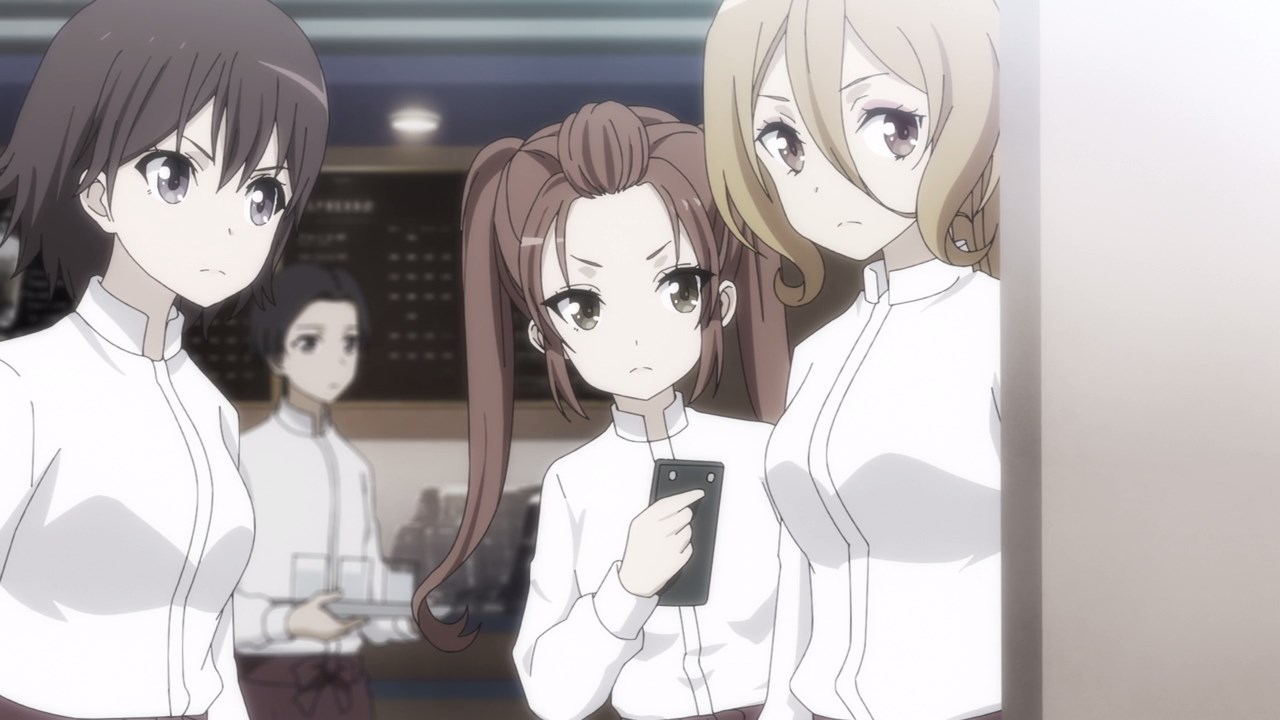 Turns out that they went to Greatest Hotel YTG as waitresses. Once Hirana and the rest are at the hot springs, they secretly took pictures and steal their undies from their lockers.

I have to say that the Yotogi clan should do some background checks before recruiting those buffoons but in any case, Mikomiko wants Muzica and the rest of Diagram to forfeit their upcoming match against Kyuru Kyurun. 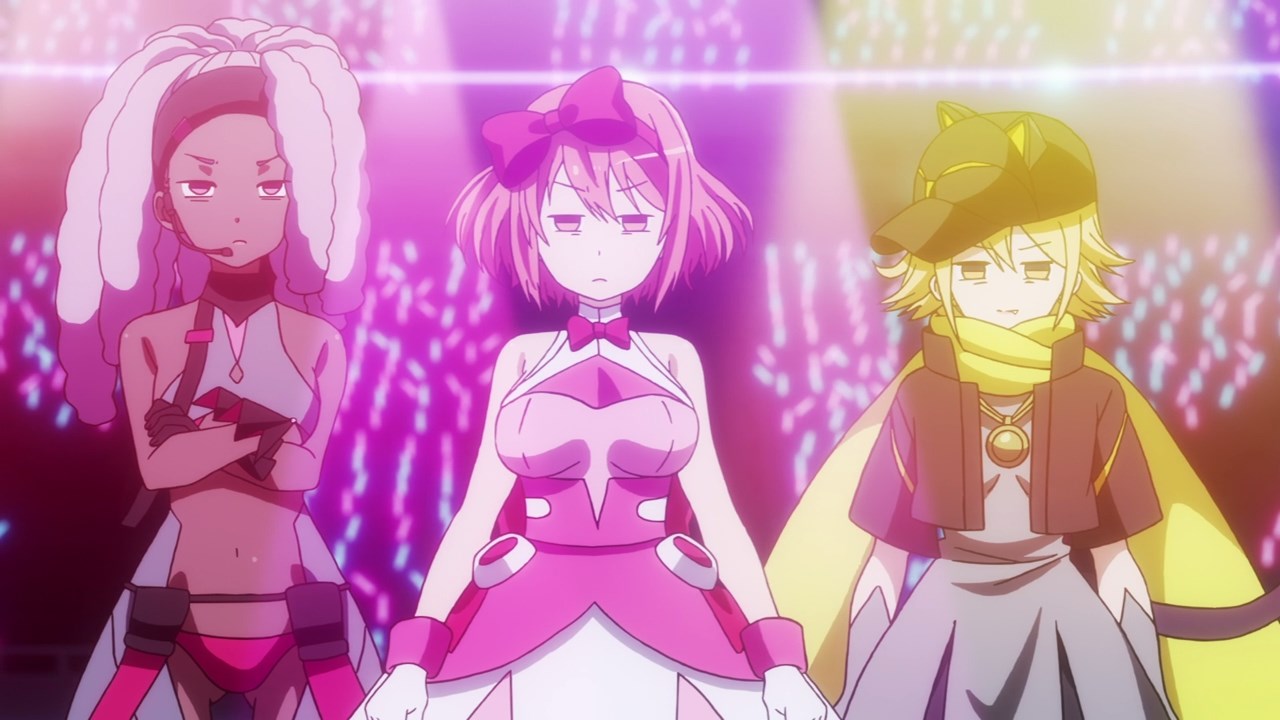 Actually, it’s not just Diagram anymore as Kyuru Kyurun wants Card Jockey and No Limit to lose. Anyways, this is a special Diva Battle where Kyuru Kyurun will get 3 times the points if they won.

Of course, the joint team of Hirana, Muzica, and MC Lion will only get 1/3 of the points if they crush Kyuru Kyurun. Basically, this battle is not worth winning. 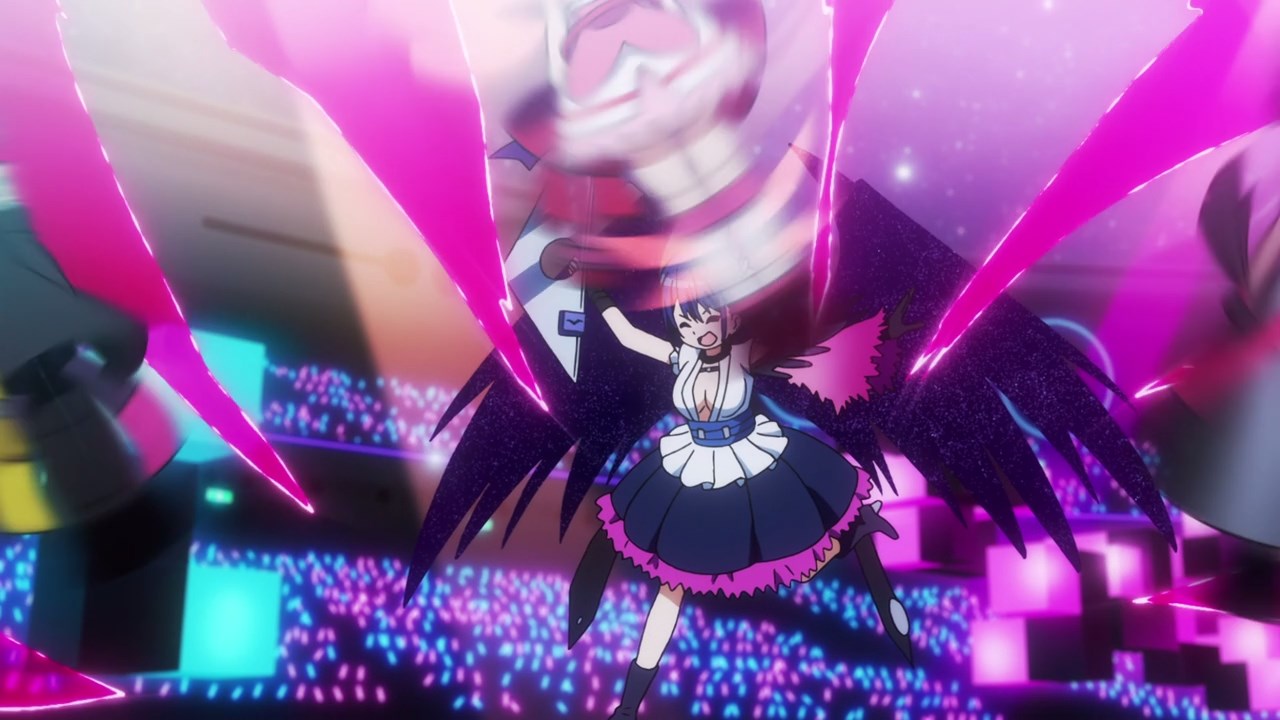 But since their reputation is on the line, the trio has no choice but to let Kyuru Kyurun win. God, what scumbags they are! 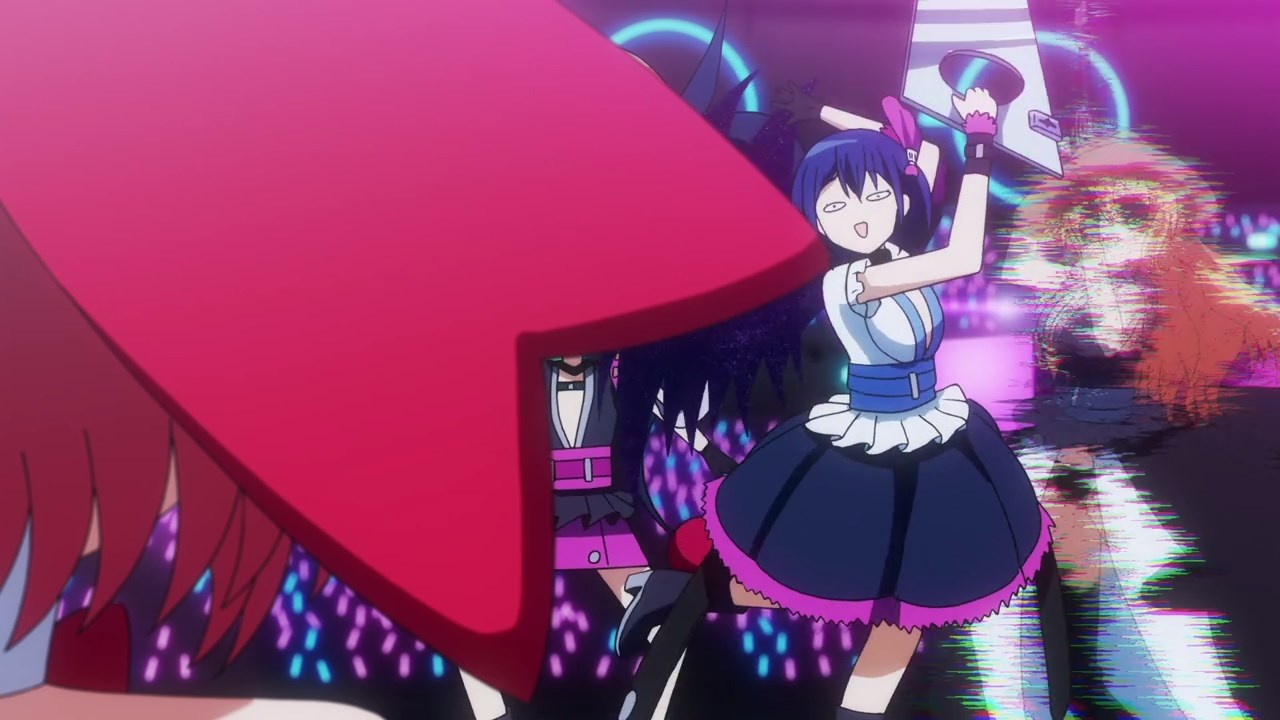 However, Mikomiko and the rest couldn’t deal the finishing blow as they freeze up during the battle. Okay, what’s going on there? 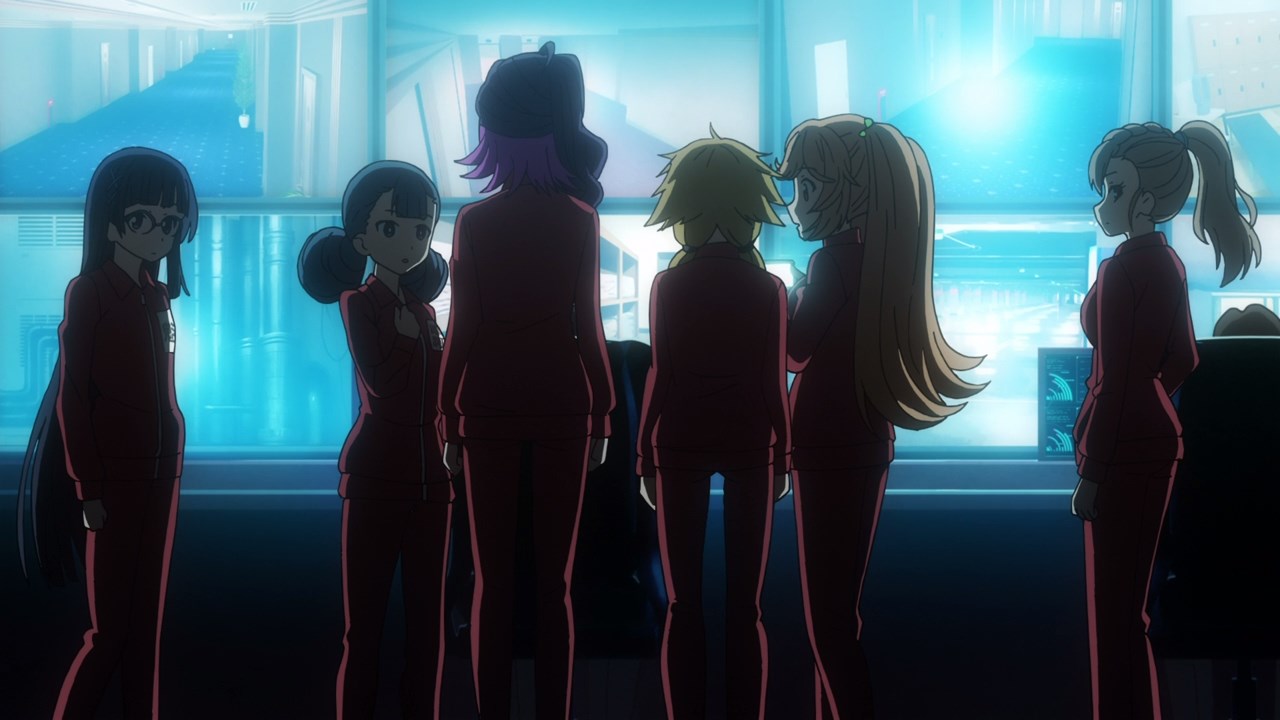 Well, Dr. Tamago and Koeru Nobagoshi told everyone that not only they stole their lingerie, but Kyuru Kyurun stole the tablet that contains Big Bang. 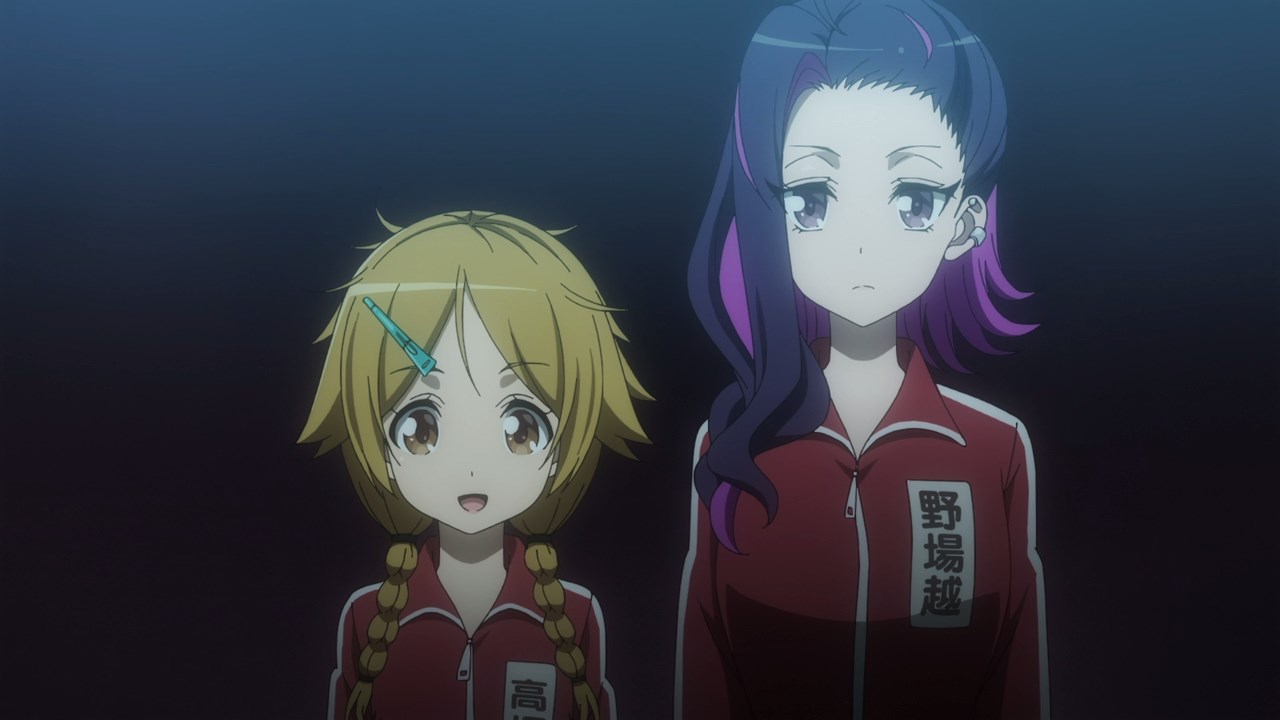 And since they forgot to turn Dr. Tamago’s tablet off, Big Bang managed to stop Kyuru Kyurun’s plan of humiliating everyone. Glad that her AI companion saved the day as she mostly deleted those compromising photon. 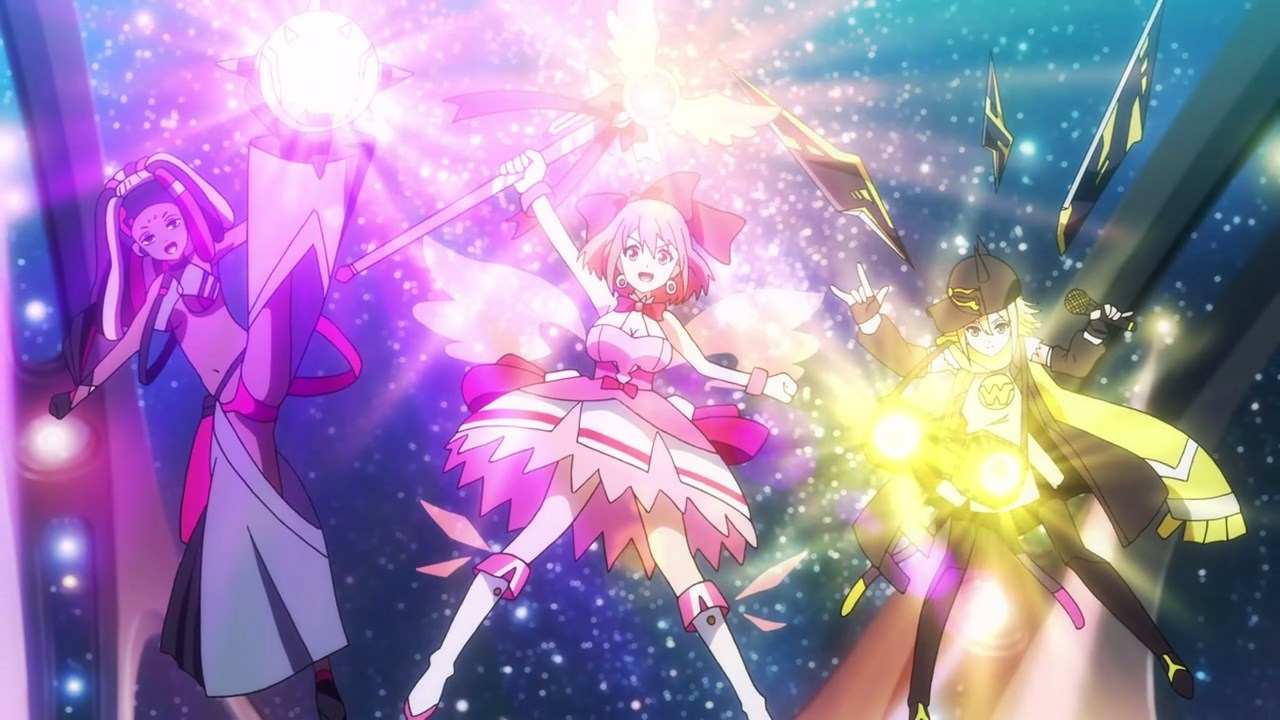 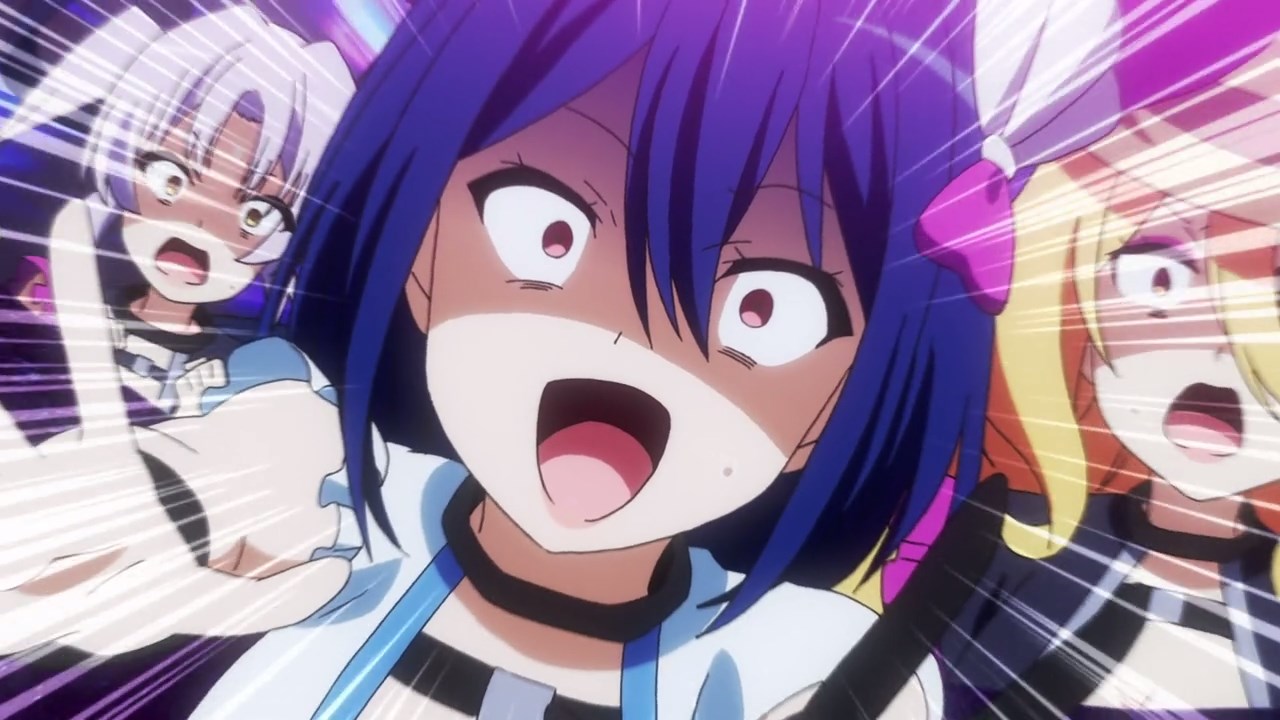 Thanks to Big Bang’s intervention, looks like Hirana, Muzica, and MC Lion have free reign on crushing Kyuru Kyurun. Poor Mikomiko and her buddies… 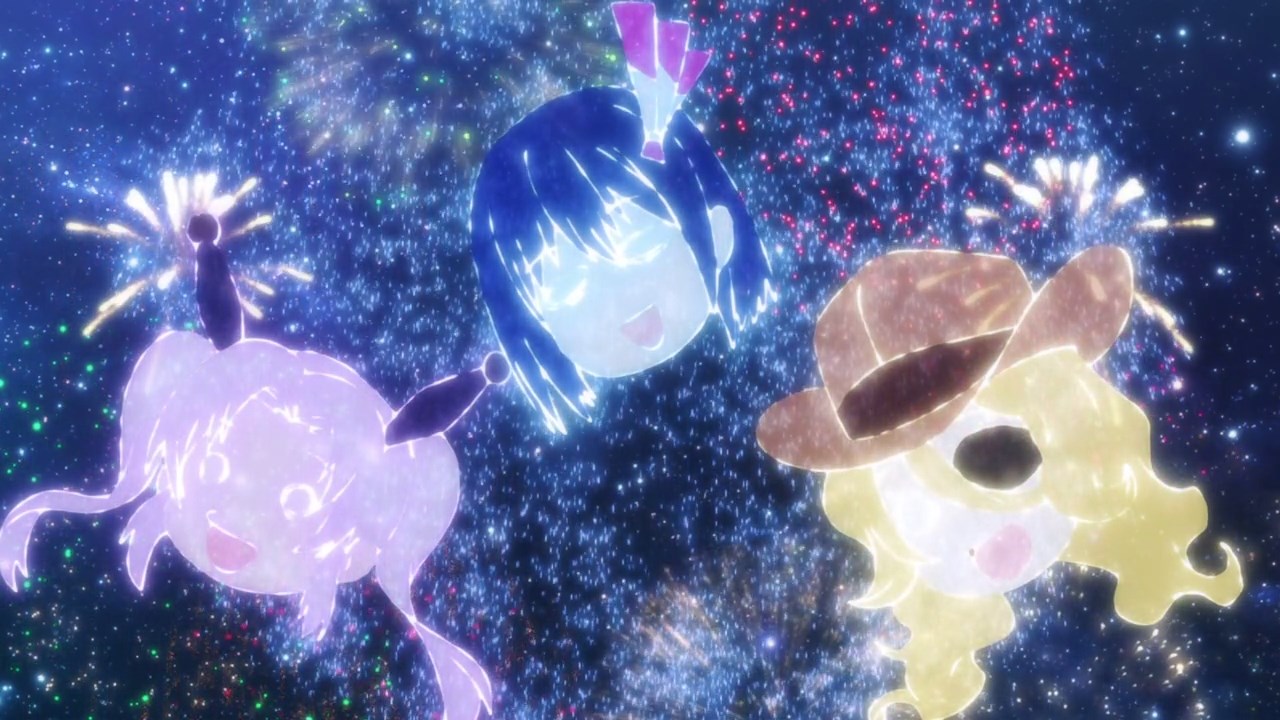 Well then, looks like Kyuru Kyurun lost big time as they’re officially demoted to D Class. You know what, I think they should get demoted earlier or just stay as one-shot characters. 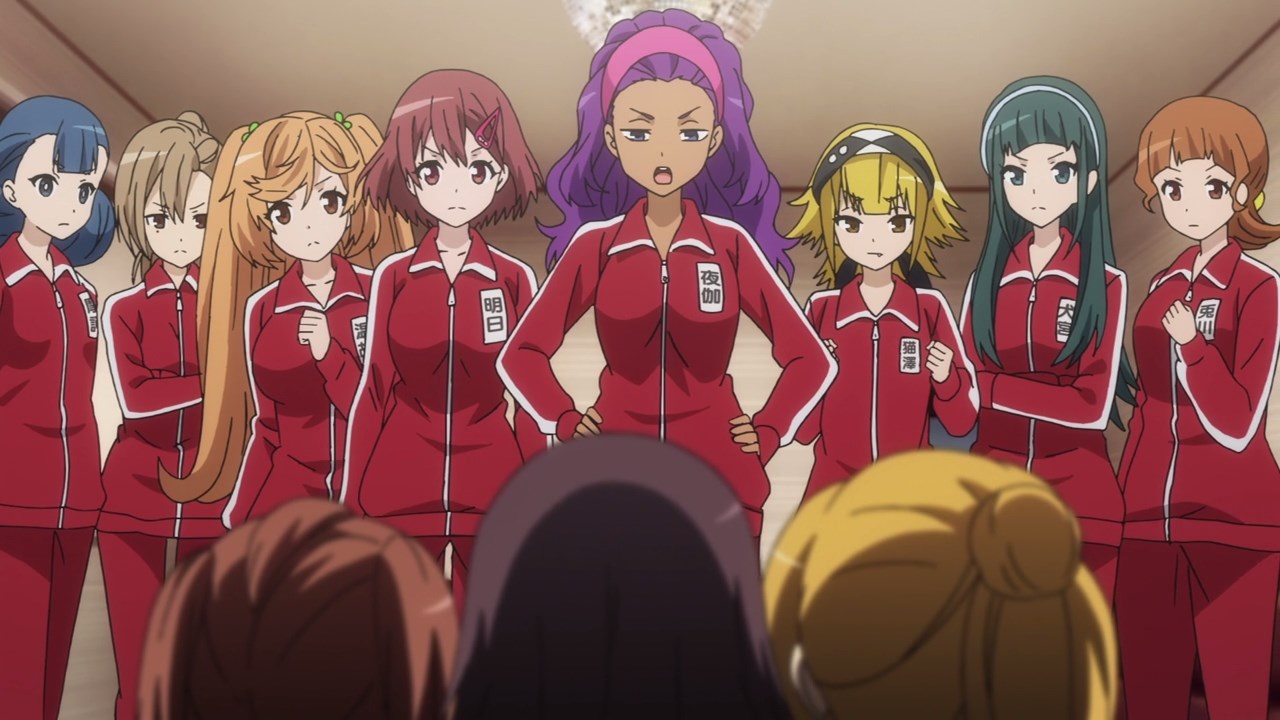 But wait, it’s not yet over as Mujika Yotogi managed to caught Mikoto Fujishima and her friends for committing a serious crime. 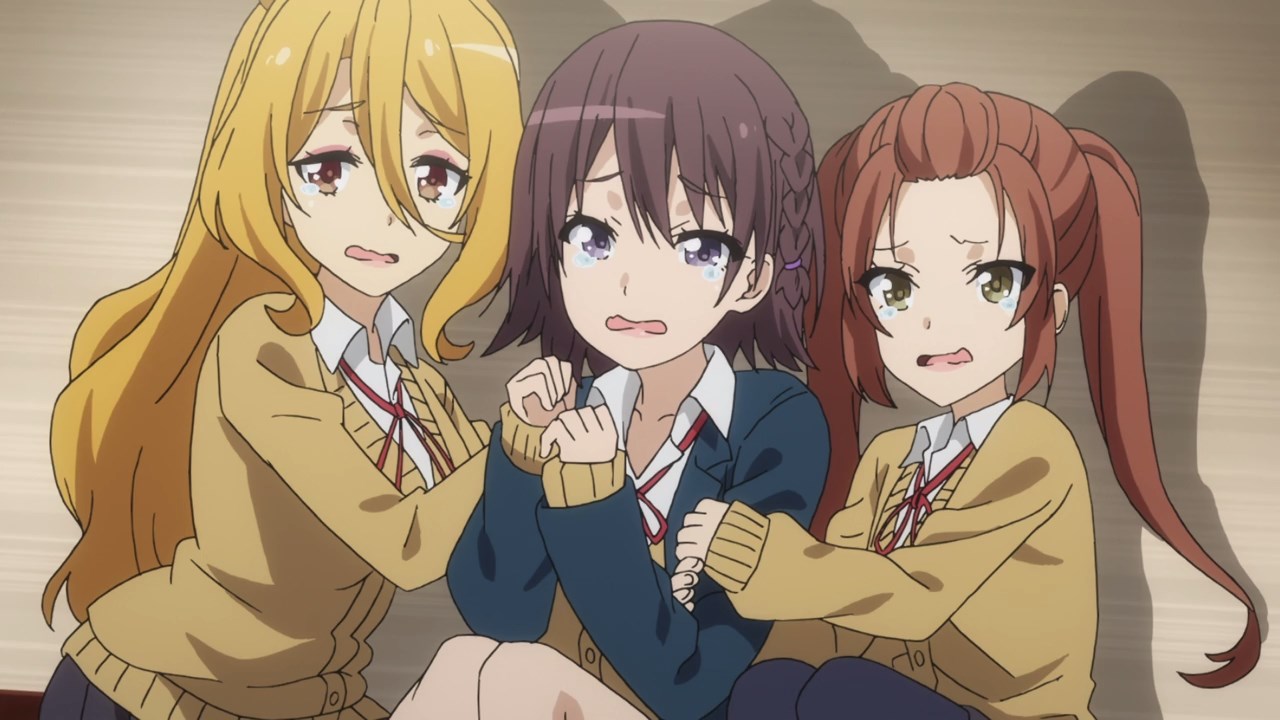 In any case, I have to say that it’s the end of the road for Kyuru Kyurun as they’re going to jail.

Honestly, it’s good riddance to those jobbers as stealing underwear and attempting to spread compromising photos is the last draw. 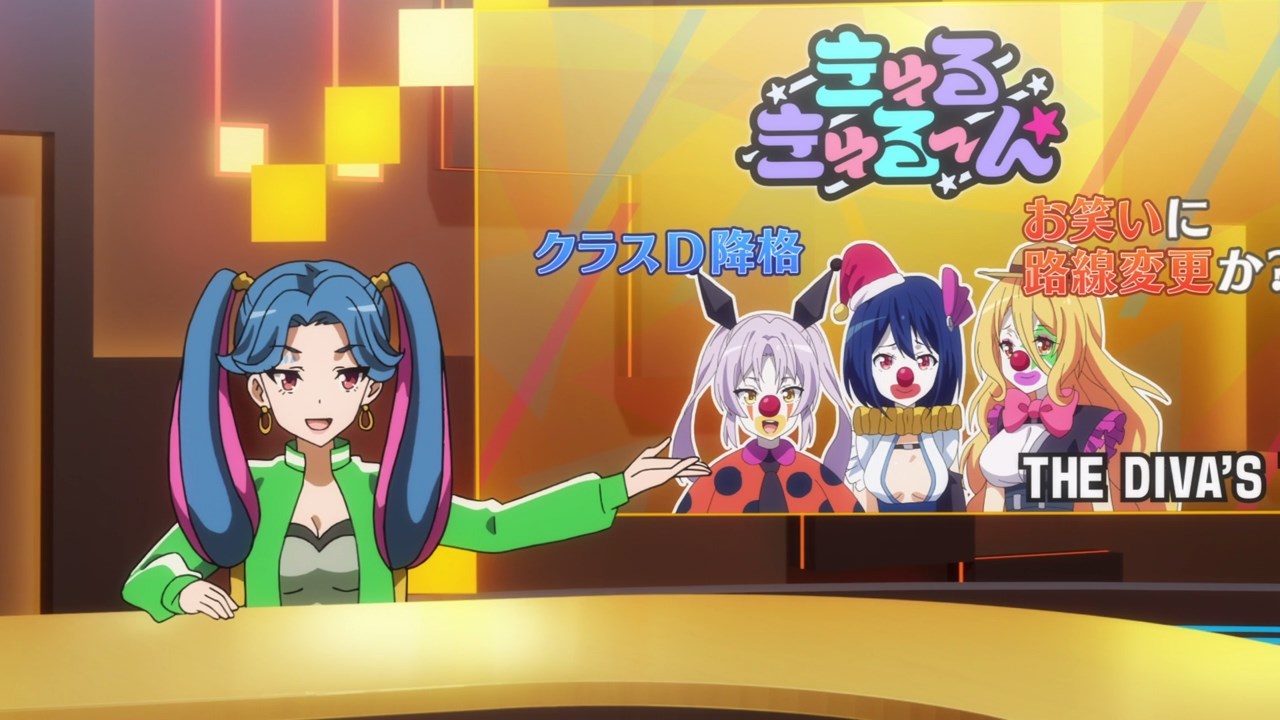 However, they stick around as Kyuru Kyurun is rebranded as clowns in D Class. That’s fitting for Mikomiko and her friends!

But that’s about it for this fanservice-laden episode as next time will get serious with the formal introduction of Deus Ex Machina. Then again, No Limit won’t fight them right away.