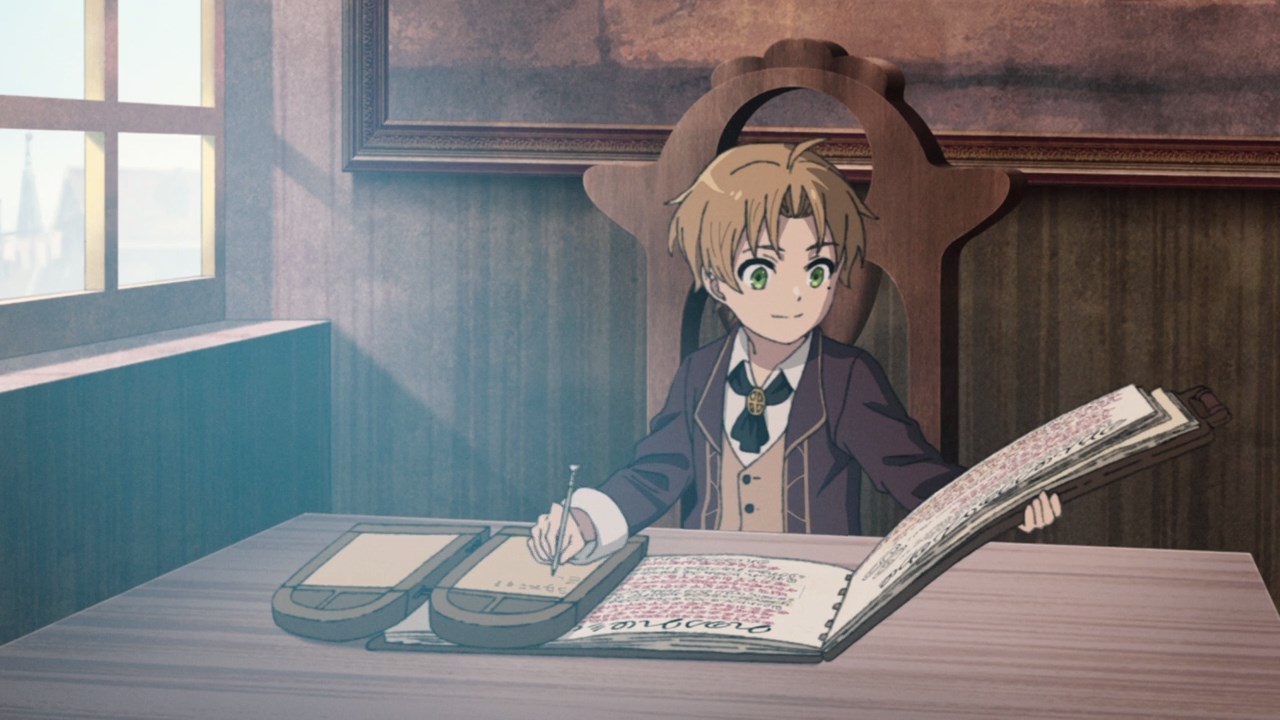 Well everyone, looks like Rudeus Greyrat has spent more than a year since he became a tutor for Eris Boreas Greyrat.

On the other hand, looks like Rudy managed to master various languages which will be useful later on in his life. Other than than, nothing special that happened for him. 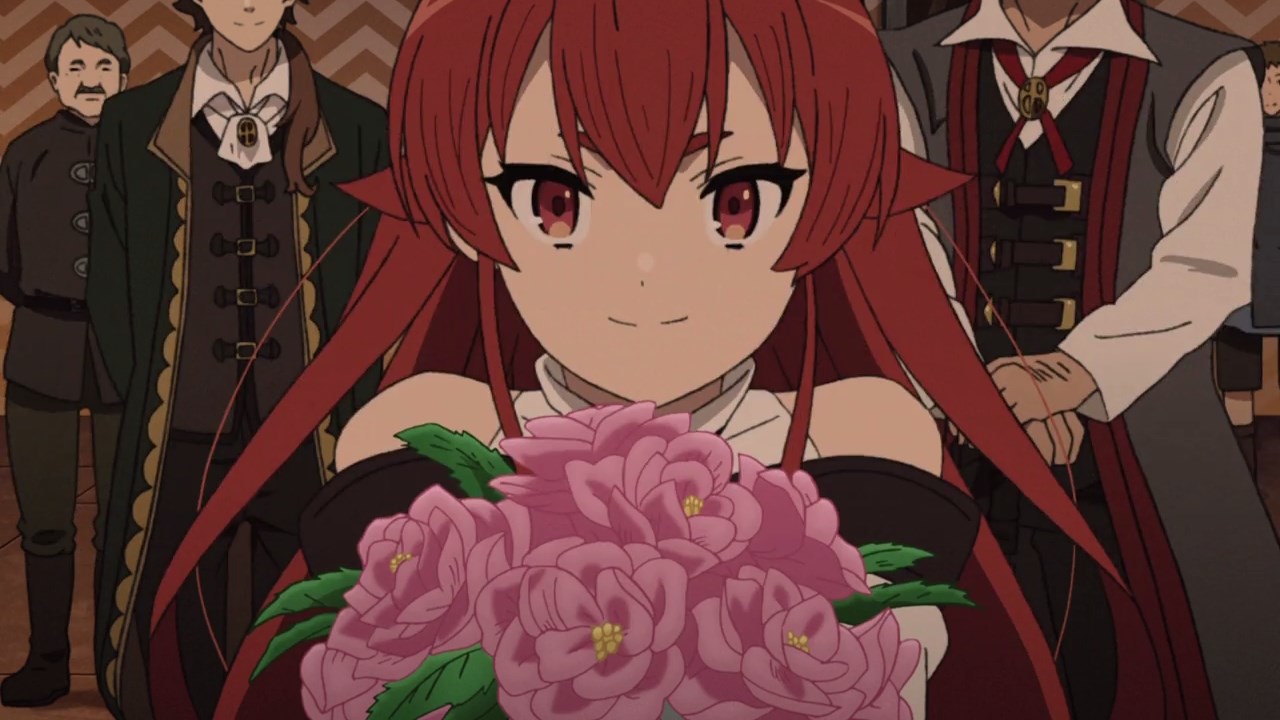 That’s until everyone throws a birthday party at him as Eris gave a bouquet of flowers to Rudy. 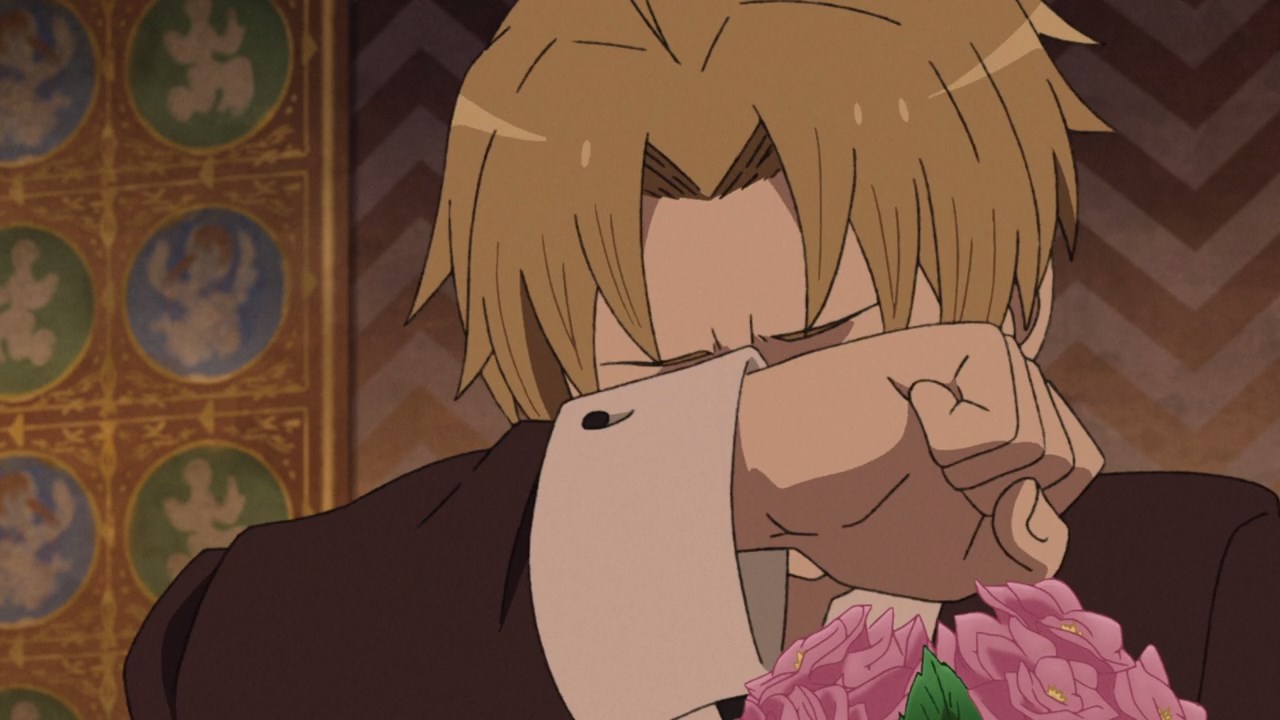 For Rudeus, he’s surprised that everyone from the Boreas branch family celebrated his 10th birthday, especially when it’s a grand party. In any case, Rudy is very happy! 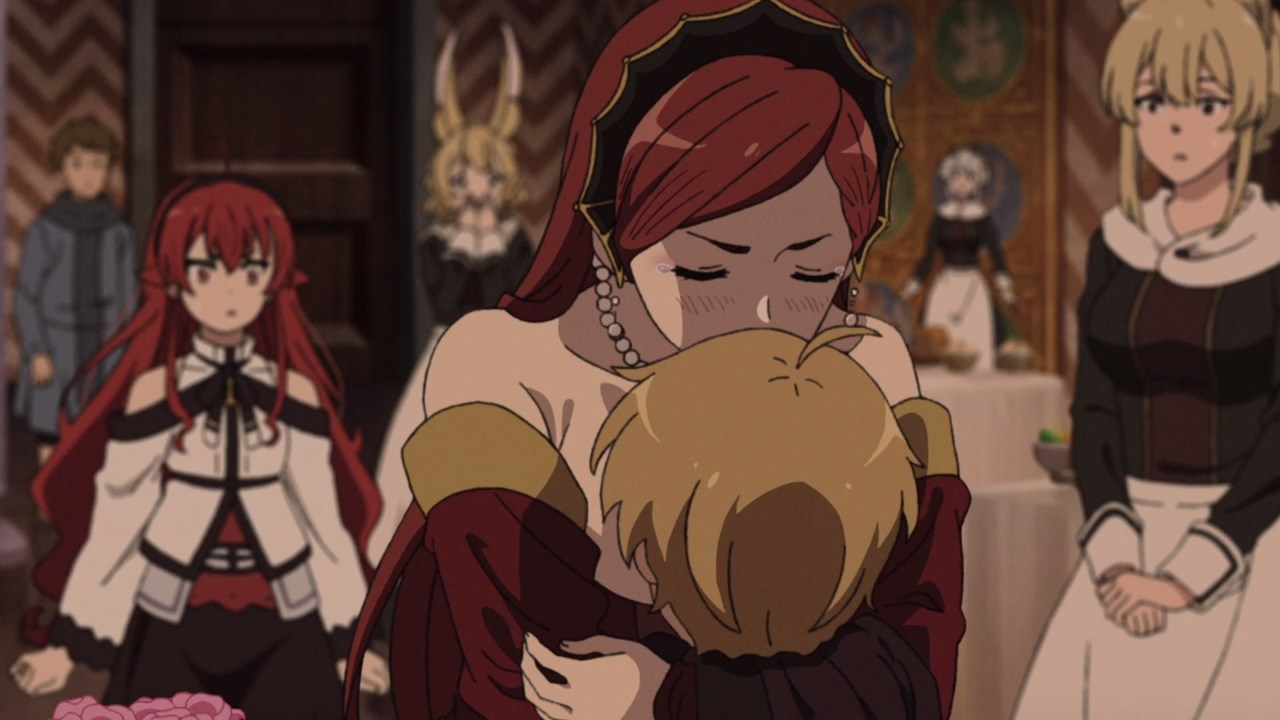 On the other hand, here’s Hilda Boreas Greyrat where she pulled a 180 and hugged Rudeus tightly. Okay, I can’t believe that Hilda is pretending to be angry towards Rudy where she actually cares about him. 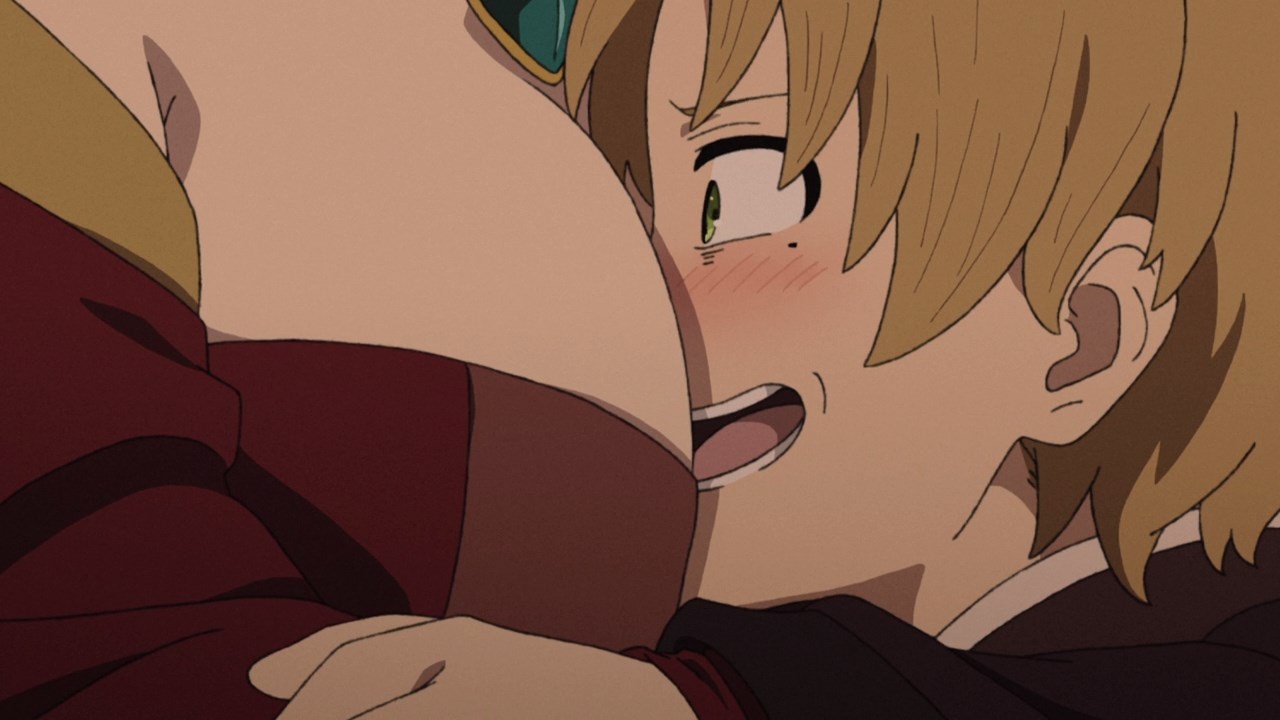 On second thought, Rudy is lucky to have his face planted towards Hilda’s boobies. After all, he has a mind of a dirty old man. 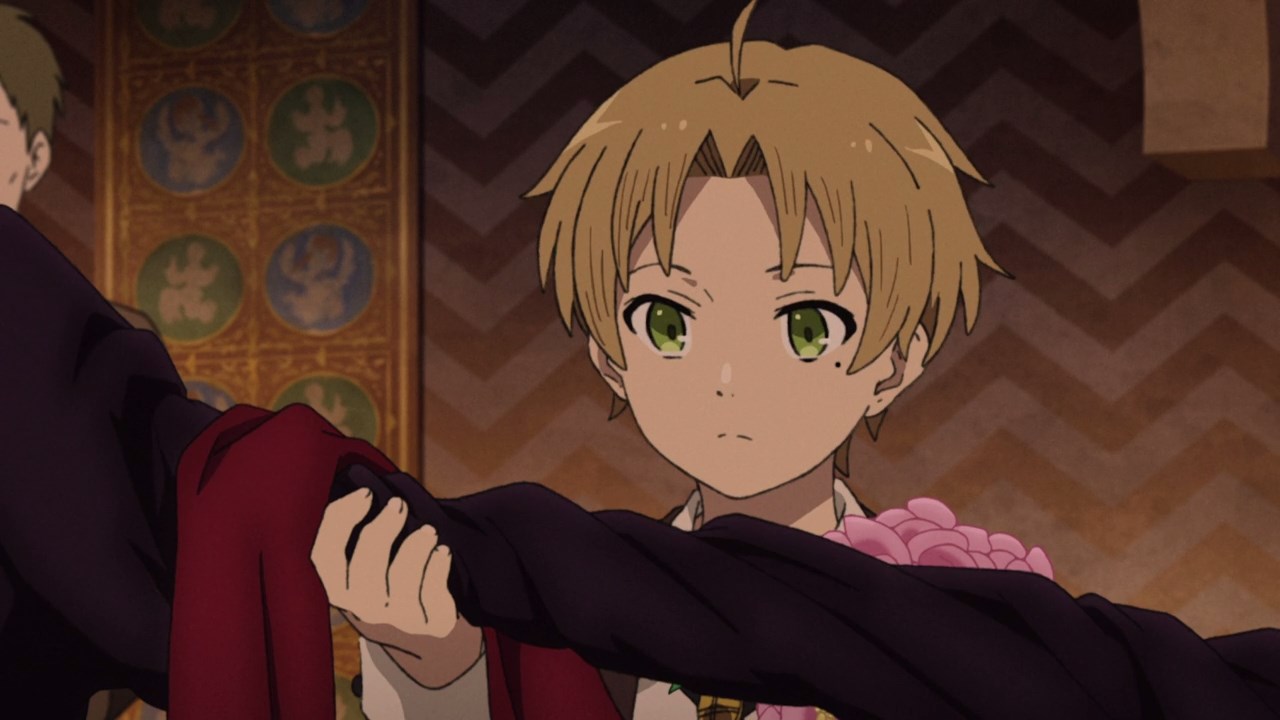 One more thing, looks like Rudy got a gift from the Boreas branch family where they created a magic staff just for him. 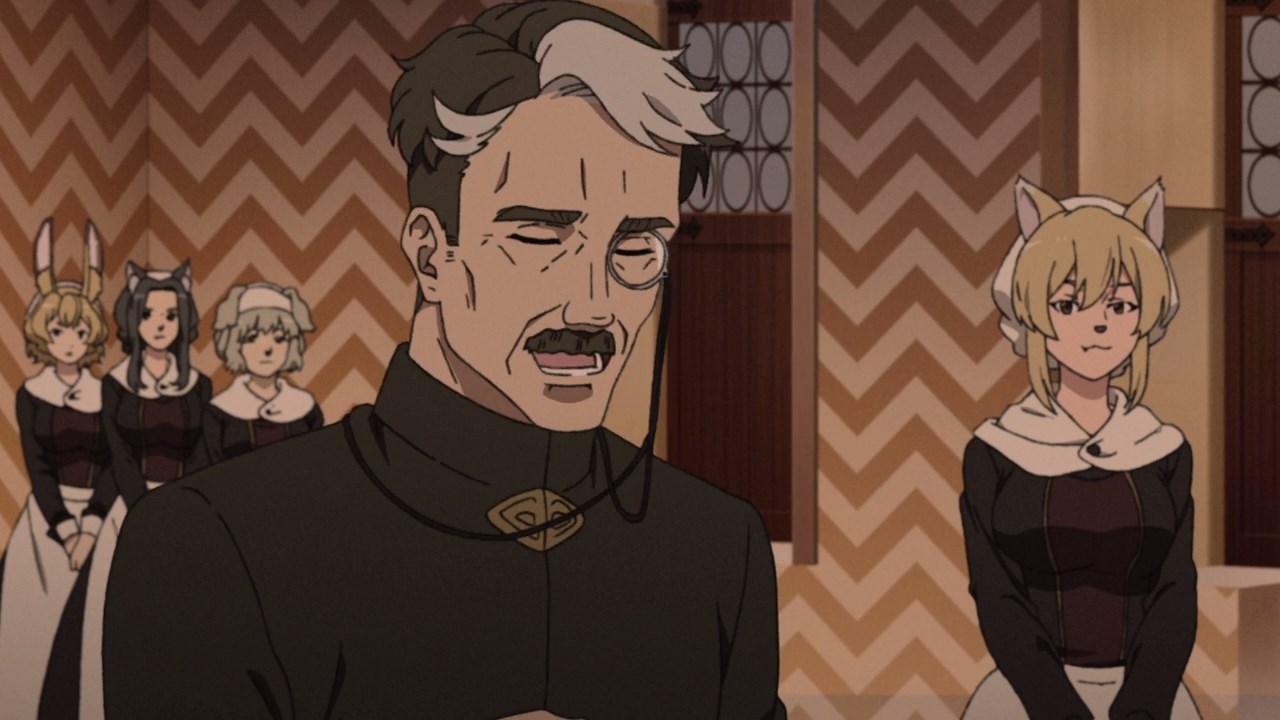 And according to this man who happened to be one of Lord Sauros’ supporters, it’s called Aqua Heartia where it was crafted by one of the greatest staff-makers in Asura Kingdom. Basically, this staff costs a fortune. 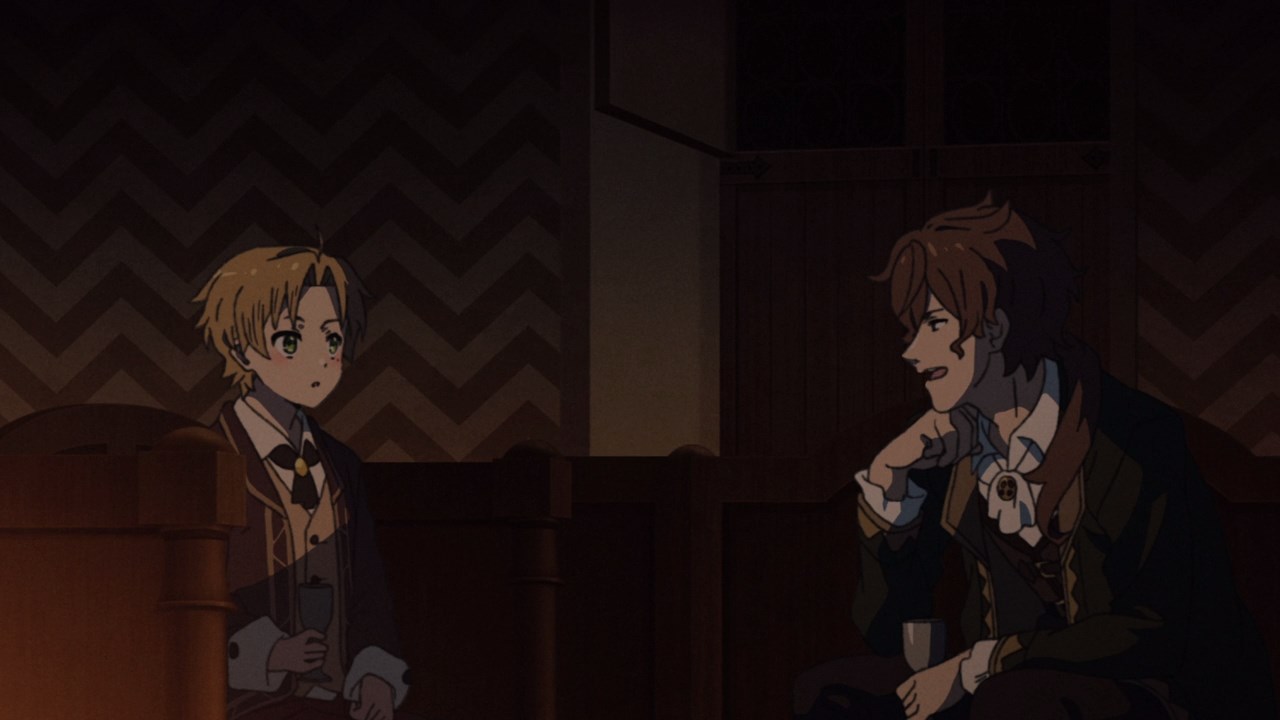 Now then, it’s time to wind down now that the birthday party is over as Philip Boreas Greyrat asked Rudeus to marry his daughter so he can inherit the Boreas branch family. Then again, Rudy has to think about it.

By the way, I forgot to tell you that Eris is not the only child to both Philip and Hilda as they originally have two sons. But, Philip’s brother took his sons away which is why Hilda hated Rudy’s presence at first simply because she’s really angry that someone would took her children due to politics.

Oh yeah, Philip and Sauros are planning to stage a coup against the Notos branch family where it’s said that Paul’s brother is ill-suited to be a leader. In short, that guy is more of an asshole than Paul. 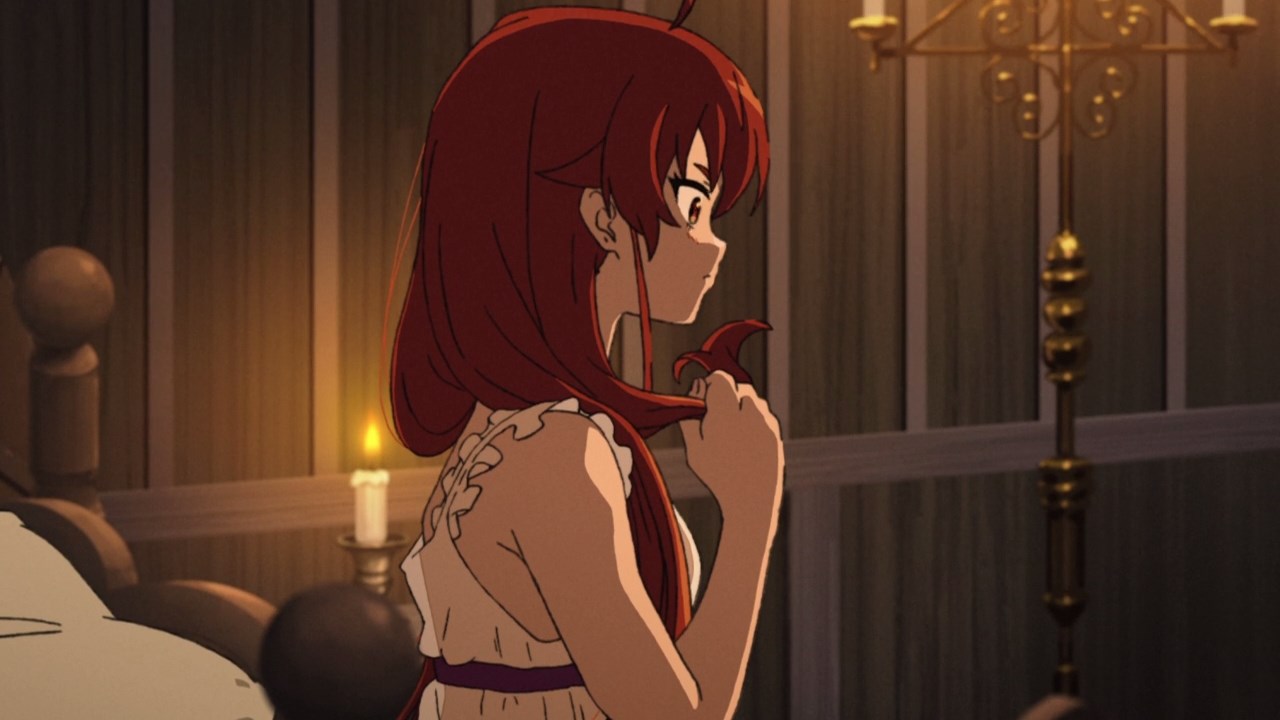 Anyways, here’s Eris where she’s sitting in Rudy’s bed. Oh, and she’s only wearing her negligee, meaning that Eris wants to have sex with him. 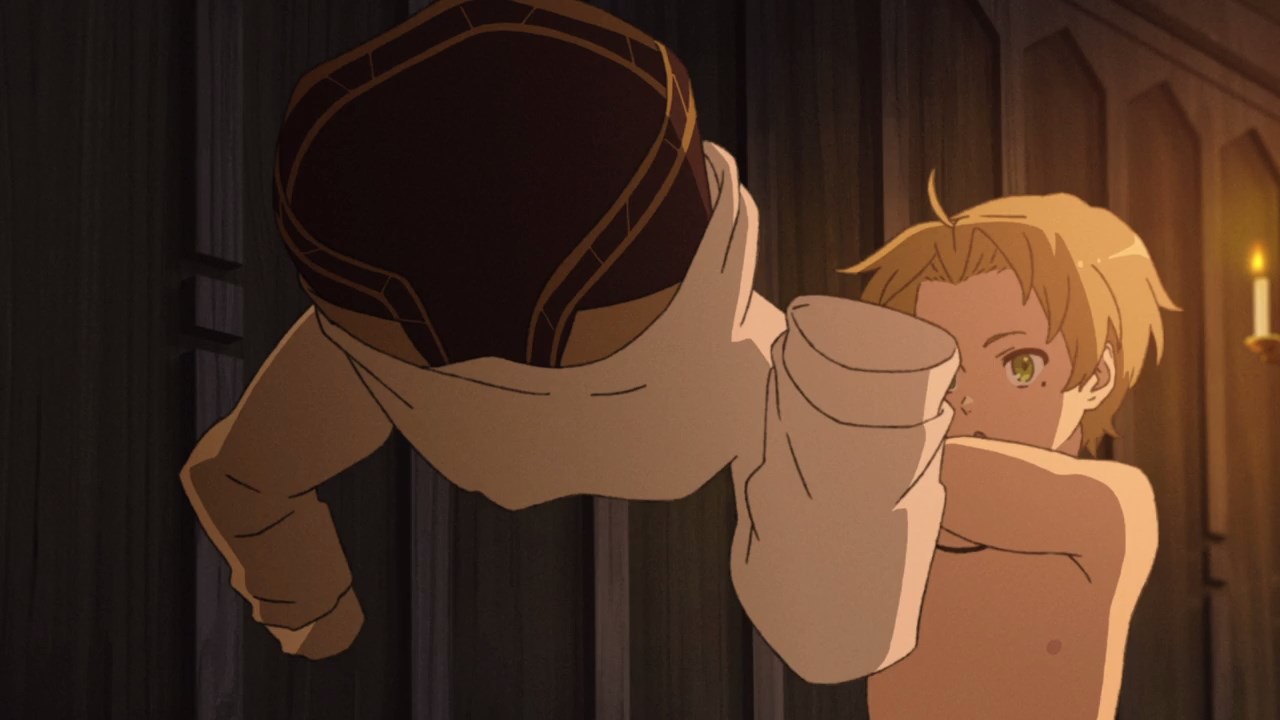 Oh well, looks like Rudeus wants to jump into action as he took his clothes off. Then again, I doubt that Eris is mentally-prepared for it. 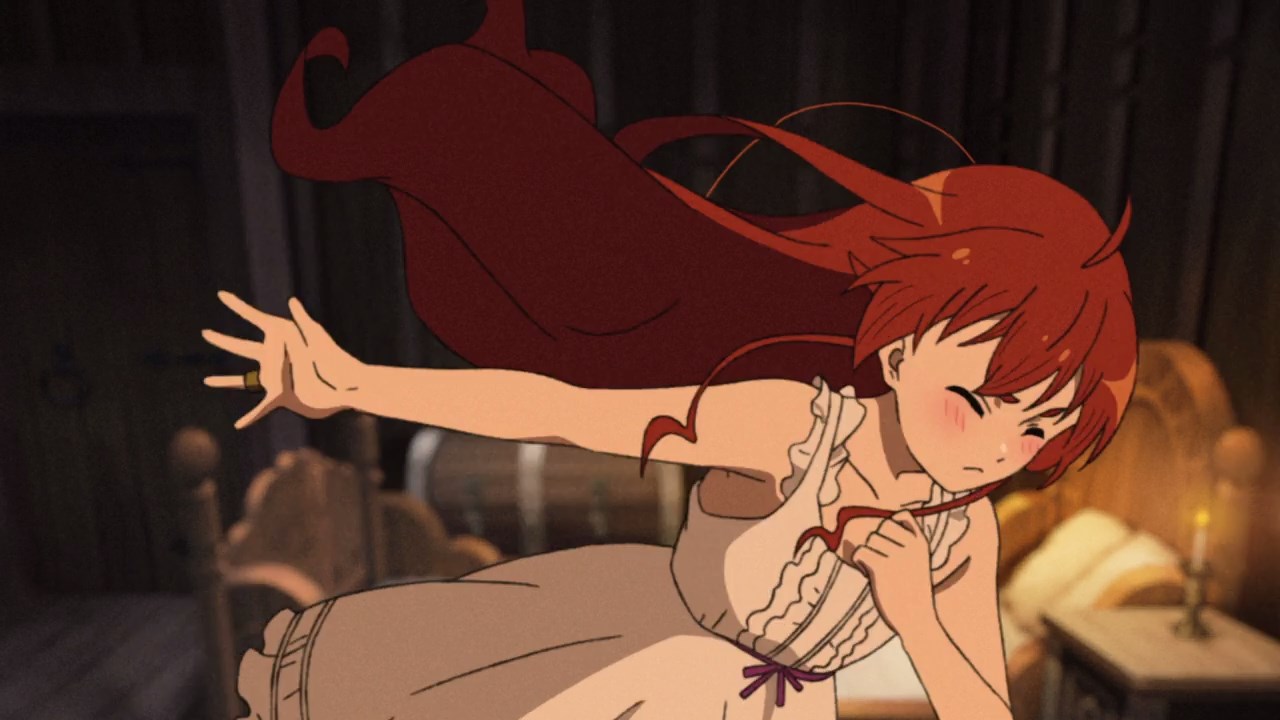 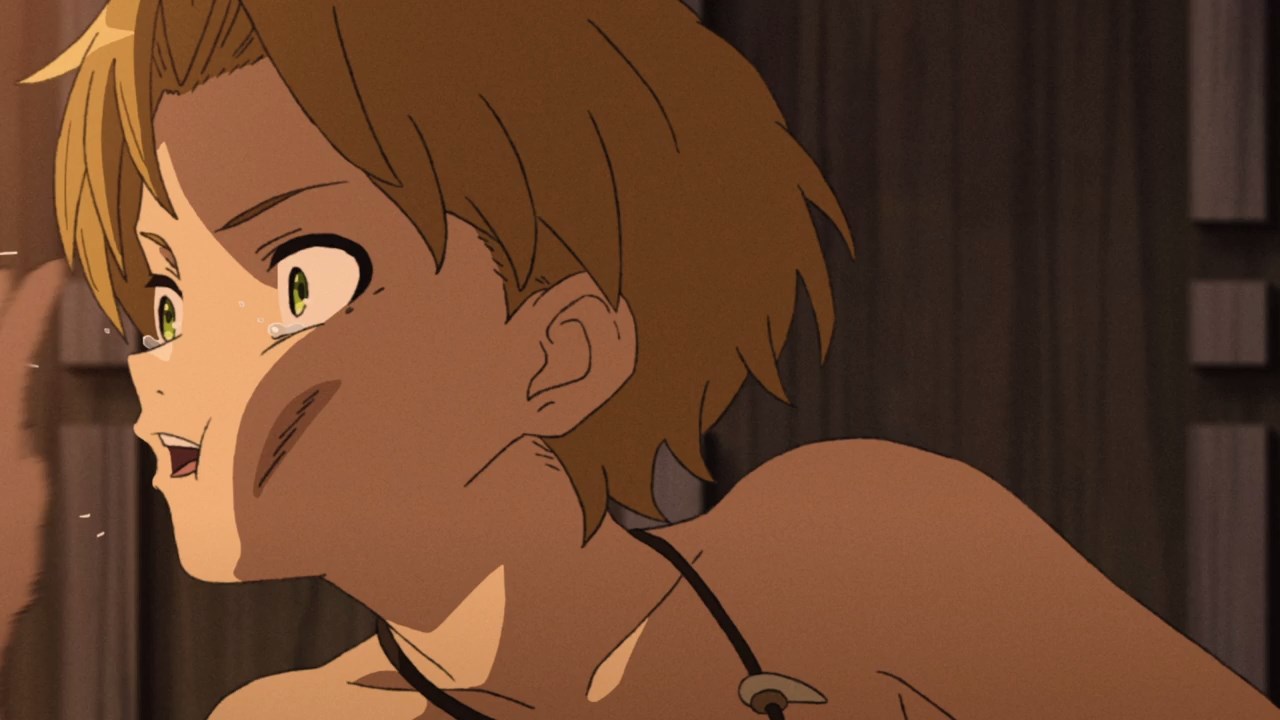 Oh wait, she’s not ready as Eris slaps Rudeus to the face. Oh, and let’s not forget that she kick him in the groin as well. Looks like Rudy didn’t have sex after his birthday party. 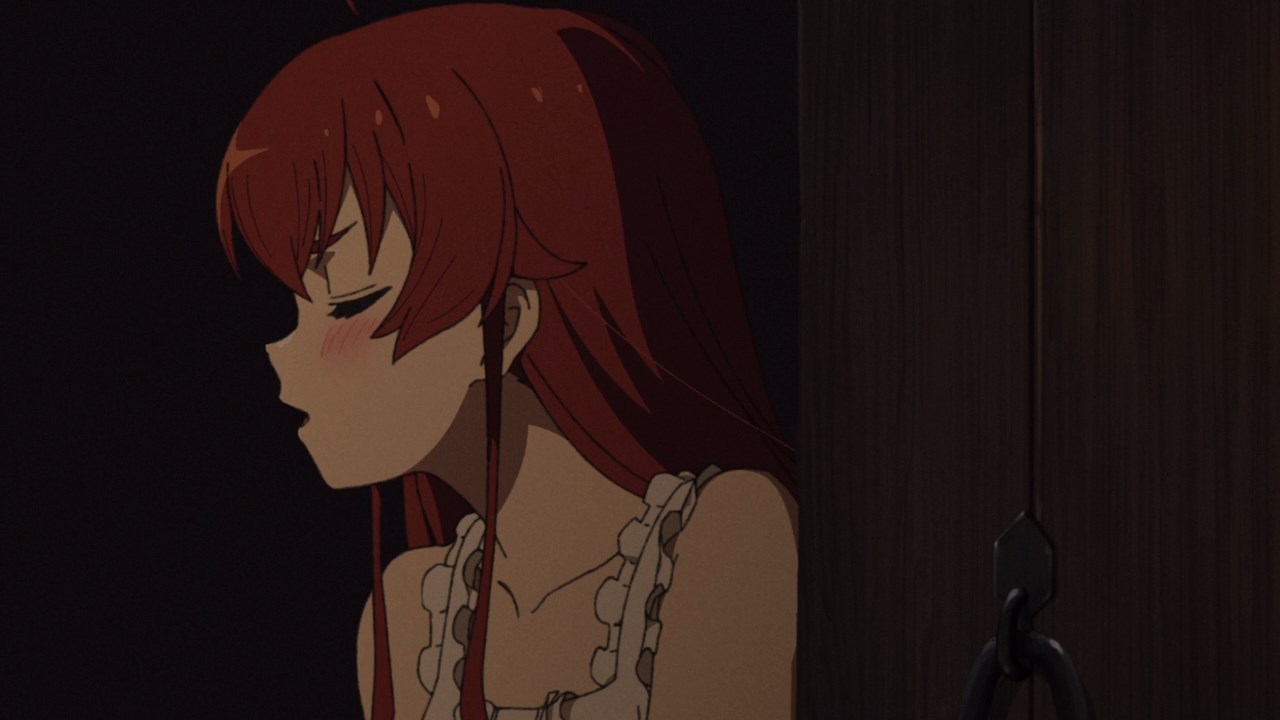 On the other hand, Eris told Rudy to wait for 5 years until she’s ready. Well, that’s gonna be a long wait for Eris to reach her maturity but speaking of 5 years, I’m hoping that his family is okay, especially Sylphiette. 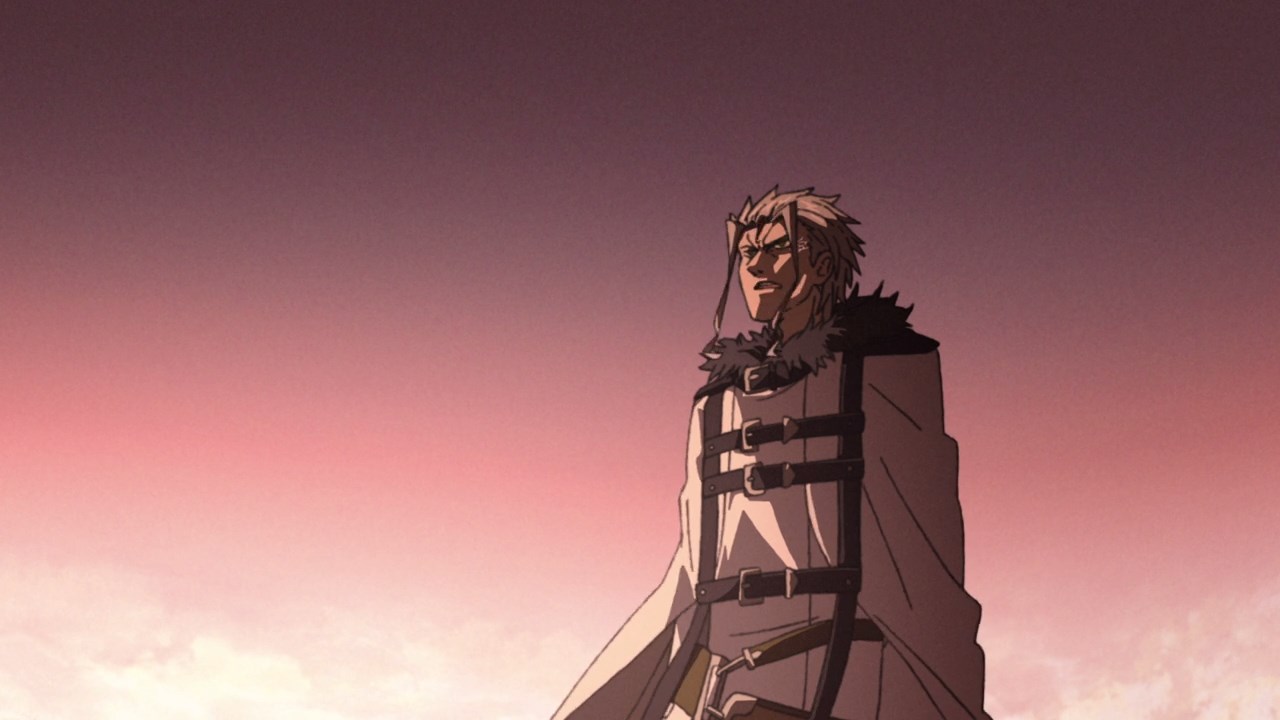 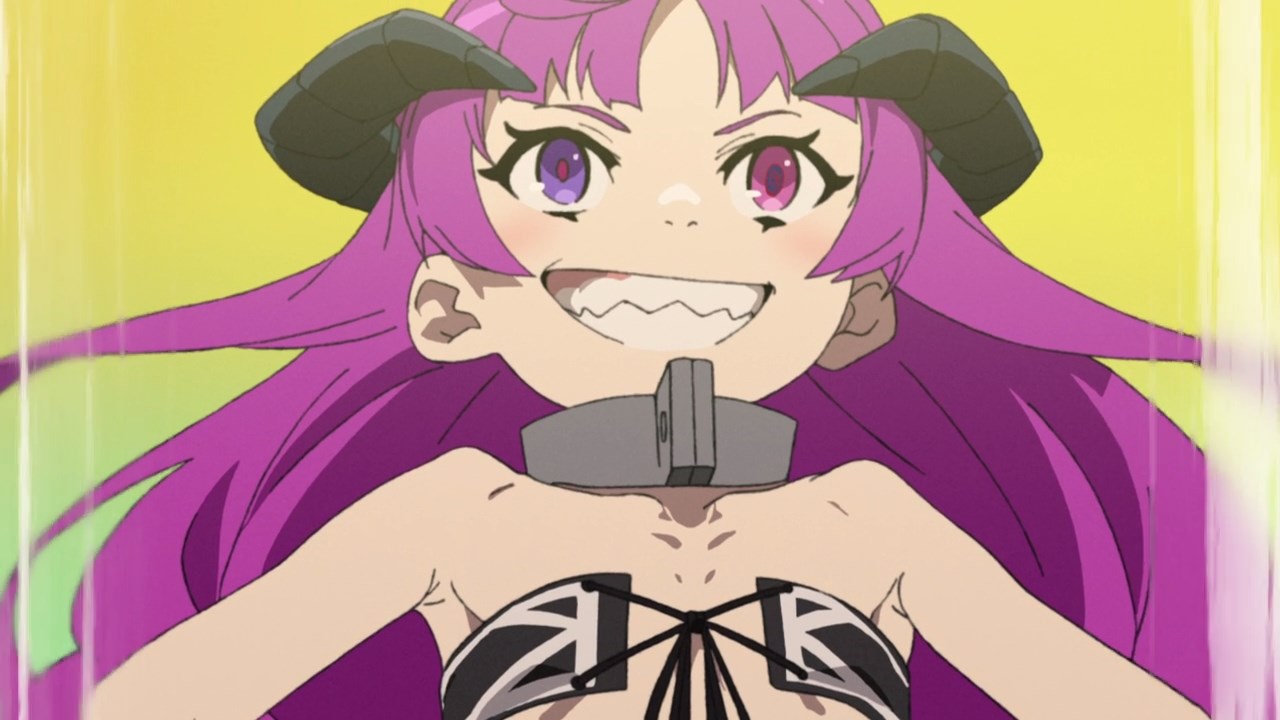 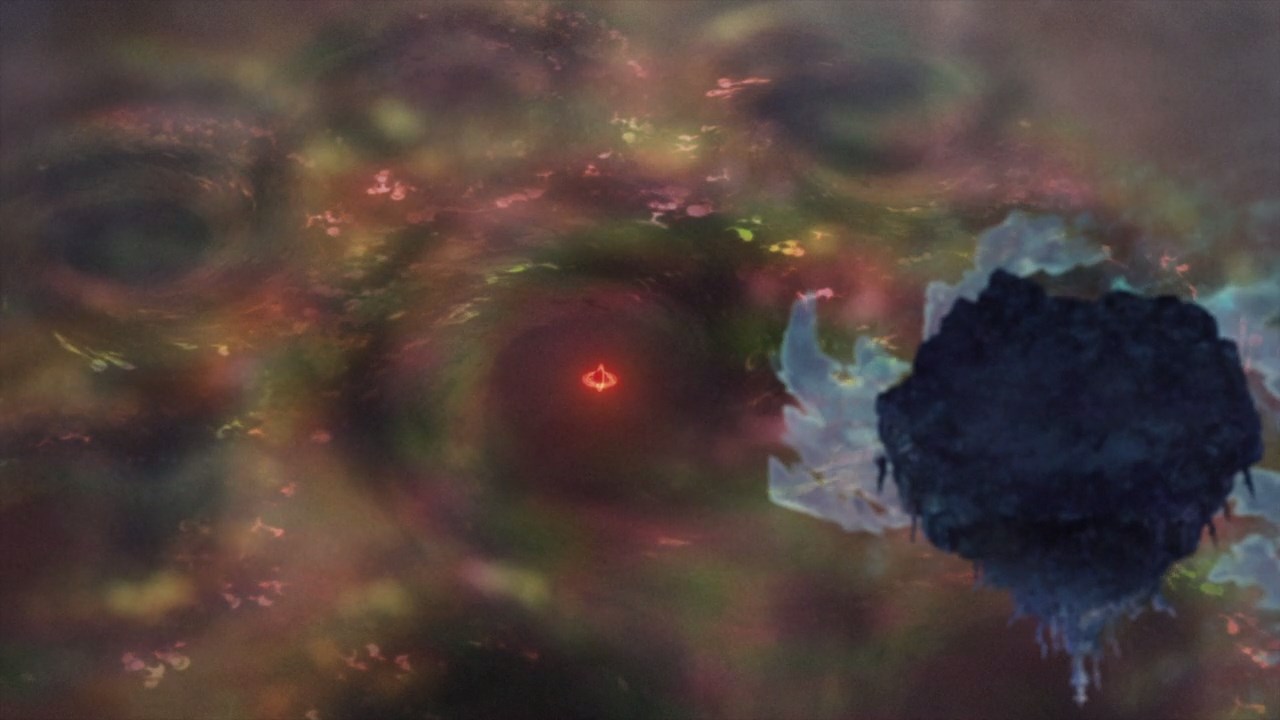 Oh yeah, and remember about the object from the previous episode? Well, turns out that it’s gathering mana and it’s about to explode soon.

One more thing, here’s Perugius’ flying fortress where it appears that the armored dragon king is concerned that the object might undo the seal and release the Demon-God Laplace. 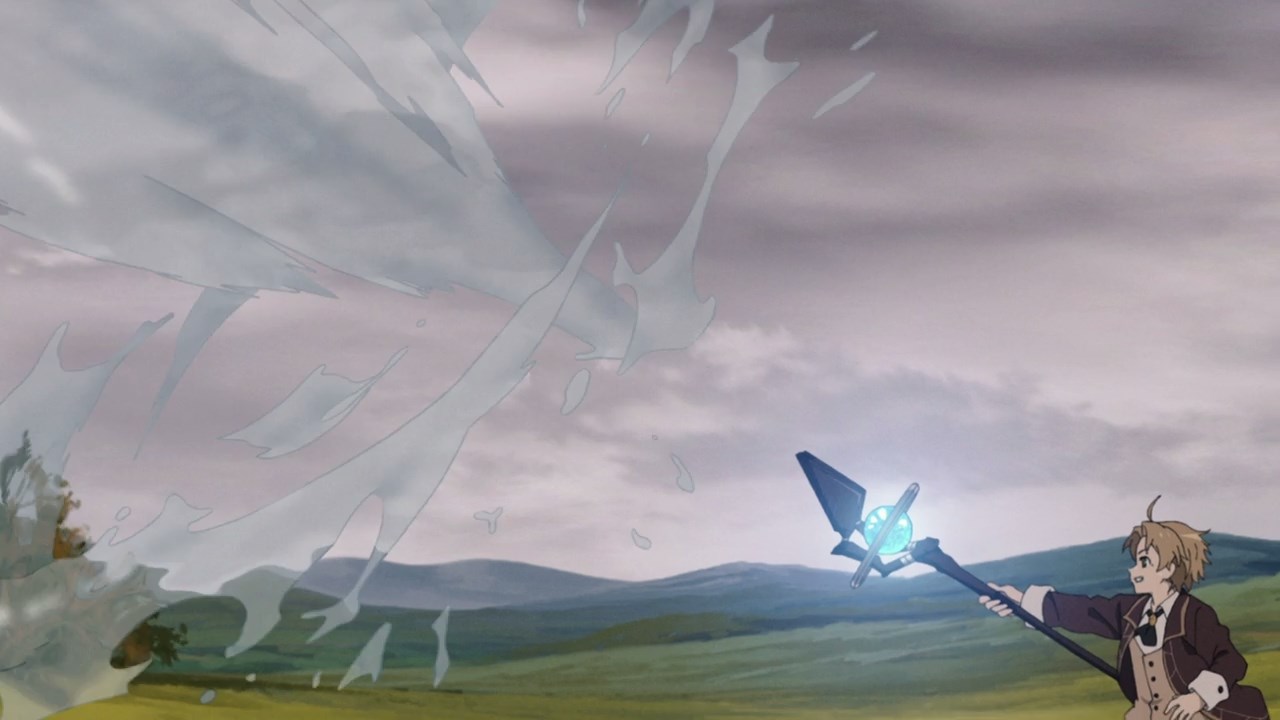 For now, it’s time for Rudeus Greyrat to us his brand-new Aqua Heartia staff and give it a spin as he casts water magic. 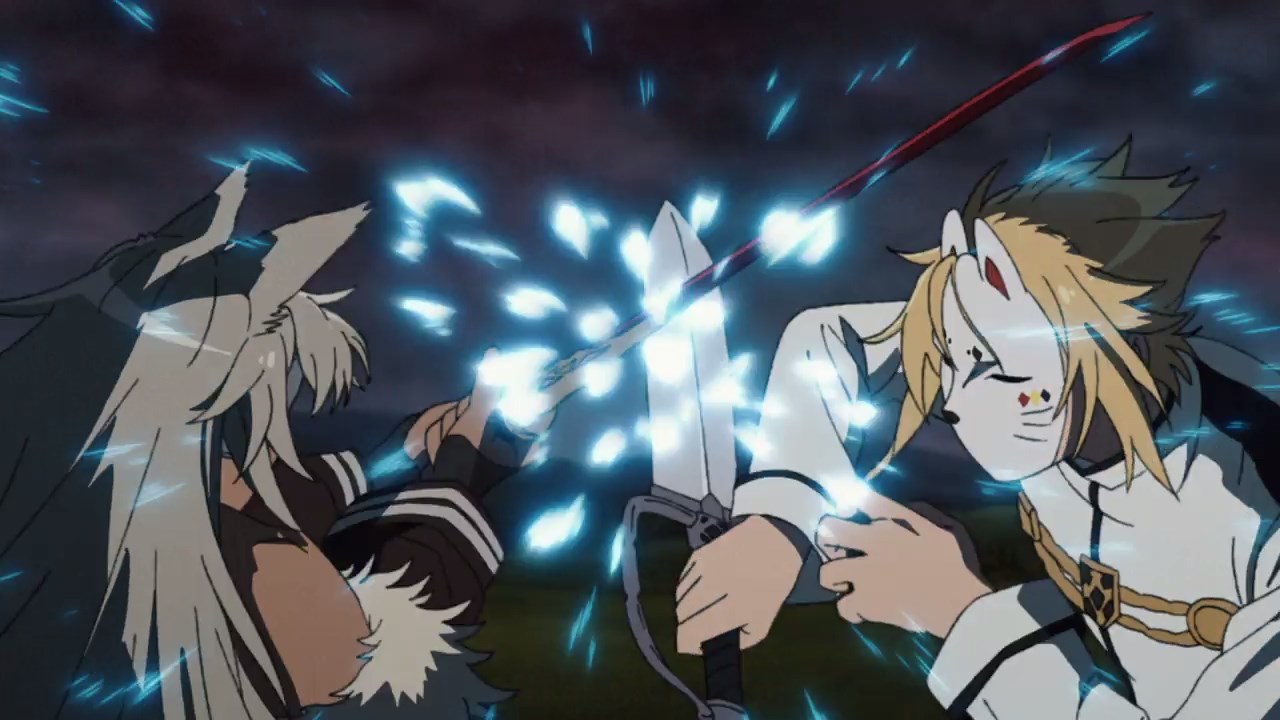 Suddenly, they were attacked by a mysterious warrior named Almanfi where he was ordered to kill Rudeus in hopes on stopping a disaster from happening in Fittoa.

Good thing Ghislaine is here to protect the kids as she fights Almanfi as asks why would he attack Rudy. Then again, Almanfi won’t answer any of it. 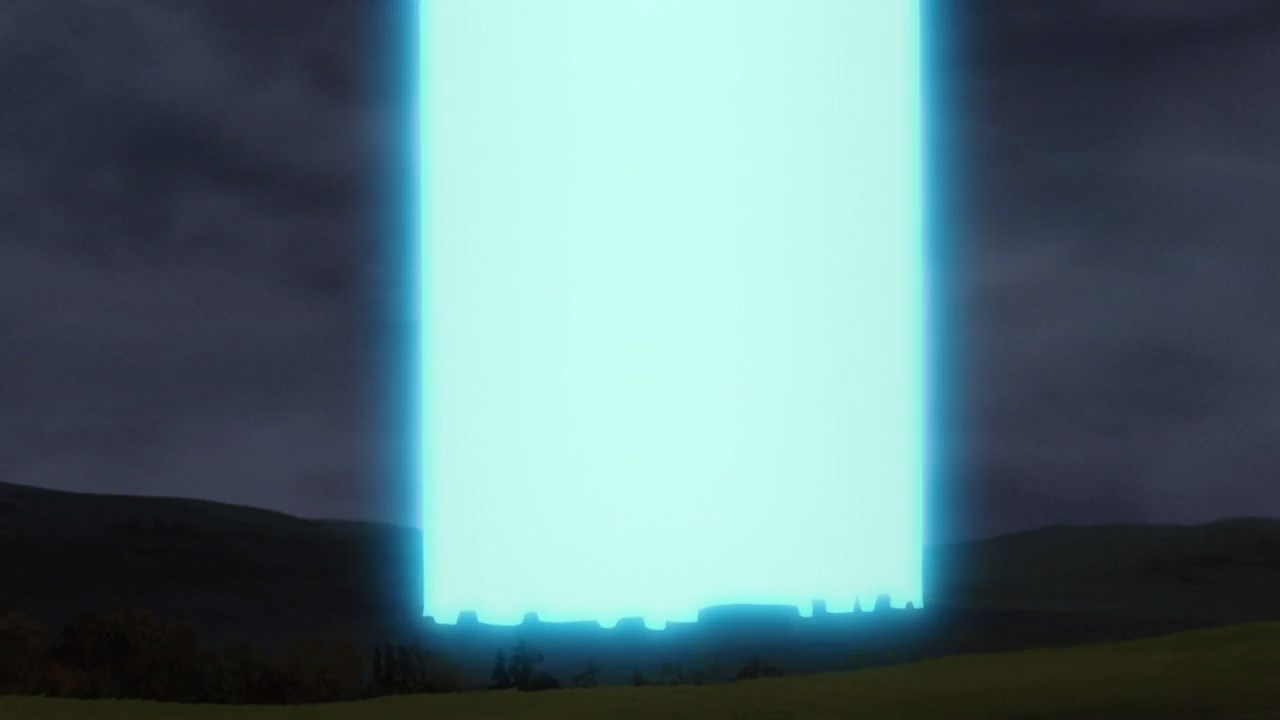 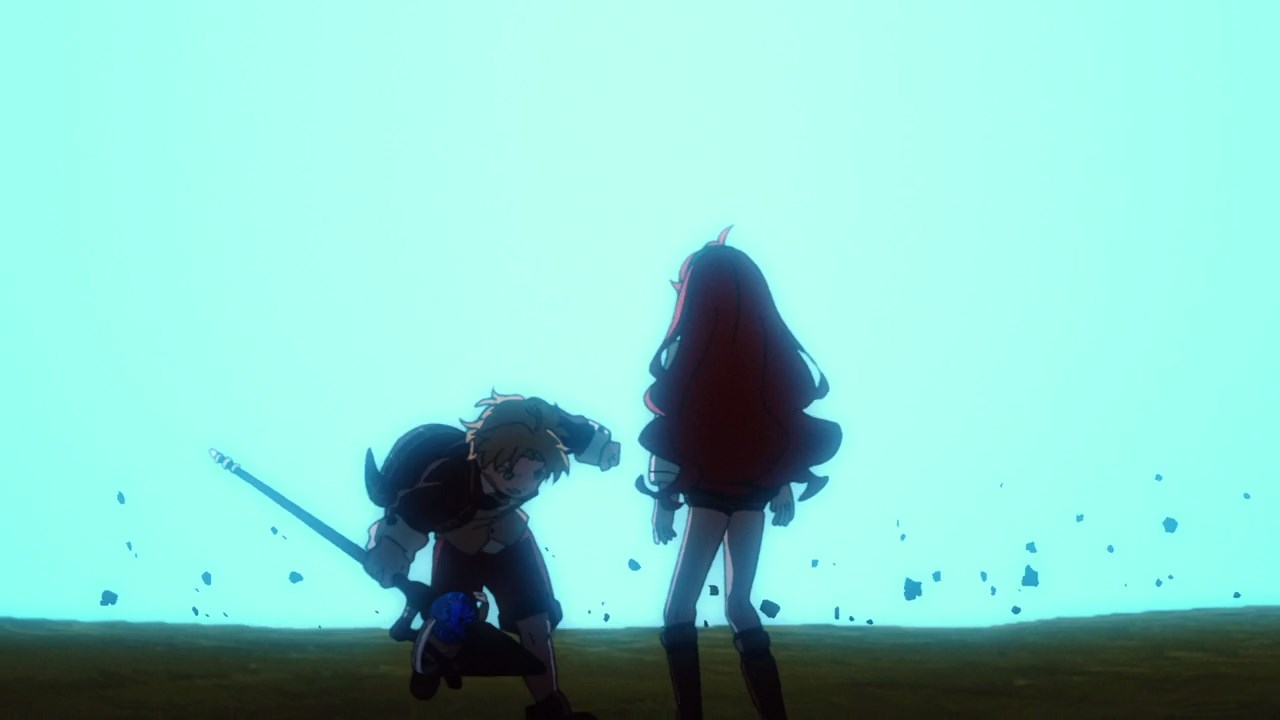 Of course, it gets worse when the object fired a large beam which engulfs the entire town. Even Rudeus and Eris can’t get away from the laser beam as we end it right here.

Okay then, I have to say that this episode is really a turning point for Mushoku Tensei as we’ll see another war between humans and demons. Still, I wonder if Rudy and his friends is still alive on the next episode?