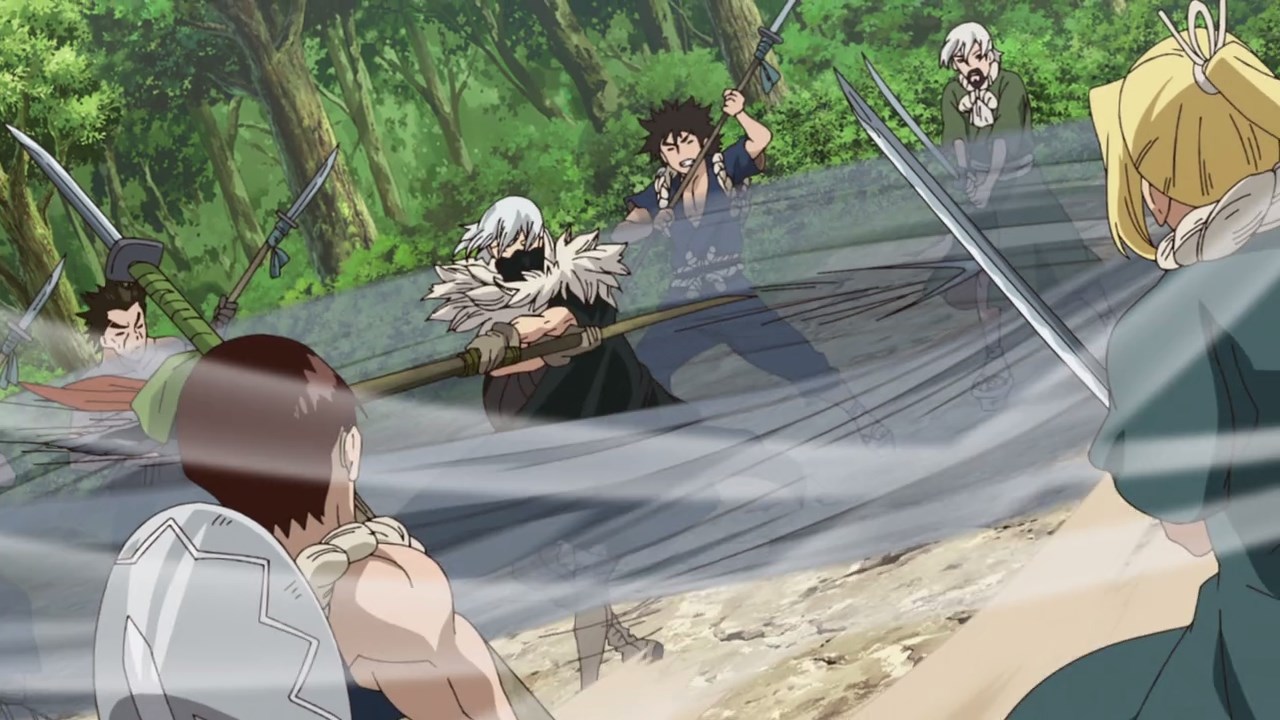 Well everyone, this is the climax to the Stone Wars as the Empire of Might and the Kingdom of Science (or Ishigami Village) are engaging for one final push to see who gets to capture the Miracle Cave.

Of course, Senku already got inside the cave but Tsukasa Shishio and Hyoga are catching up on him, all while mowing down most of Senku’s allies. 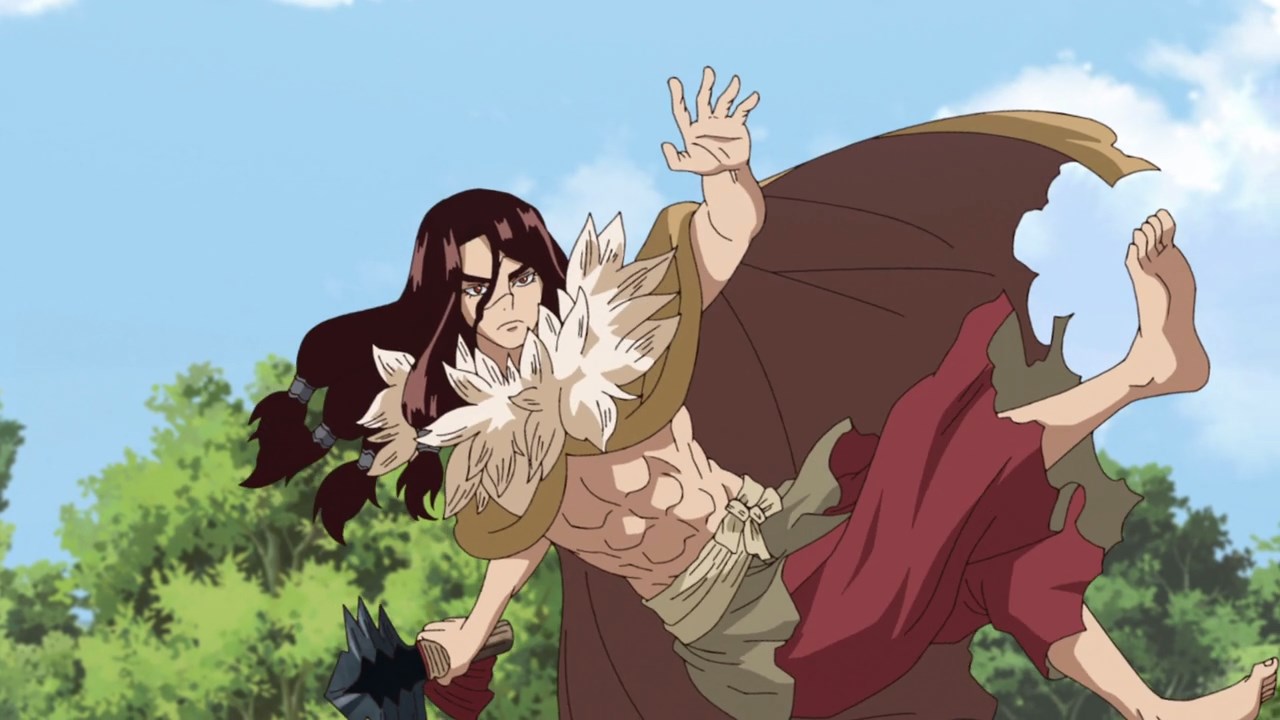 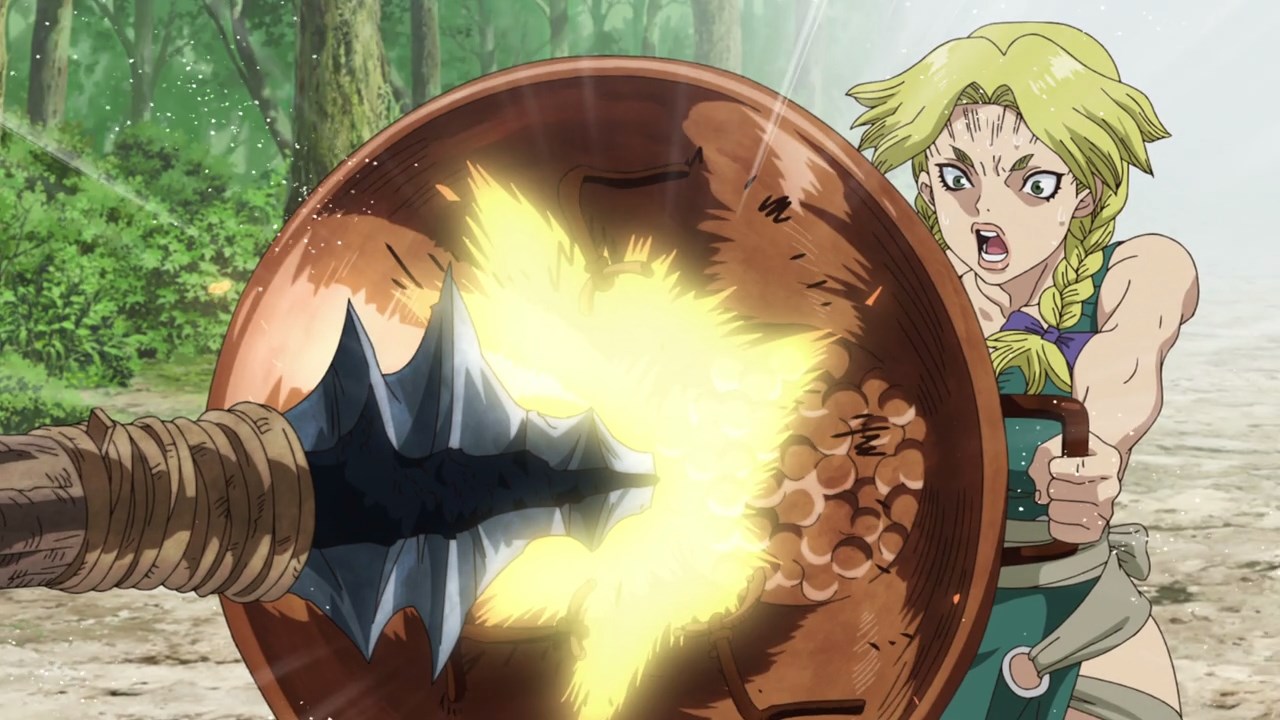 Speaking of Tsukasa Shishio, he won’t even bat an eye when dealing with traitors like Niki Hanada as Tsukasa throws a spear at her. Good thing Nikki has that parabola dish. 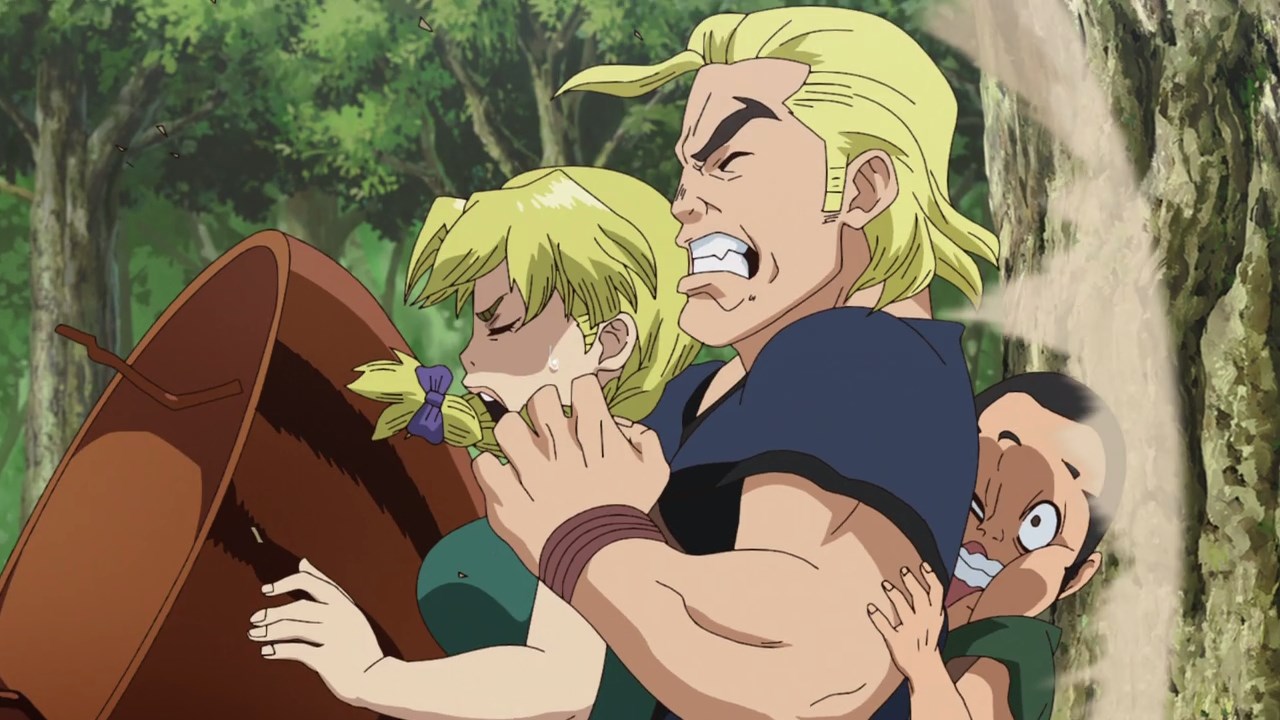 But even if she managed to protect herself from having a gaping hole in her chest, Niki Hanada was pushed back along with Magma and Mantle. Wow, Tsukasa just took out 3 birds in 1 stone. 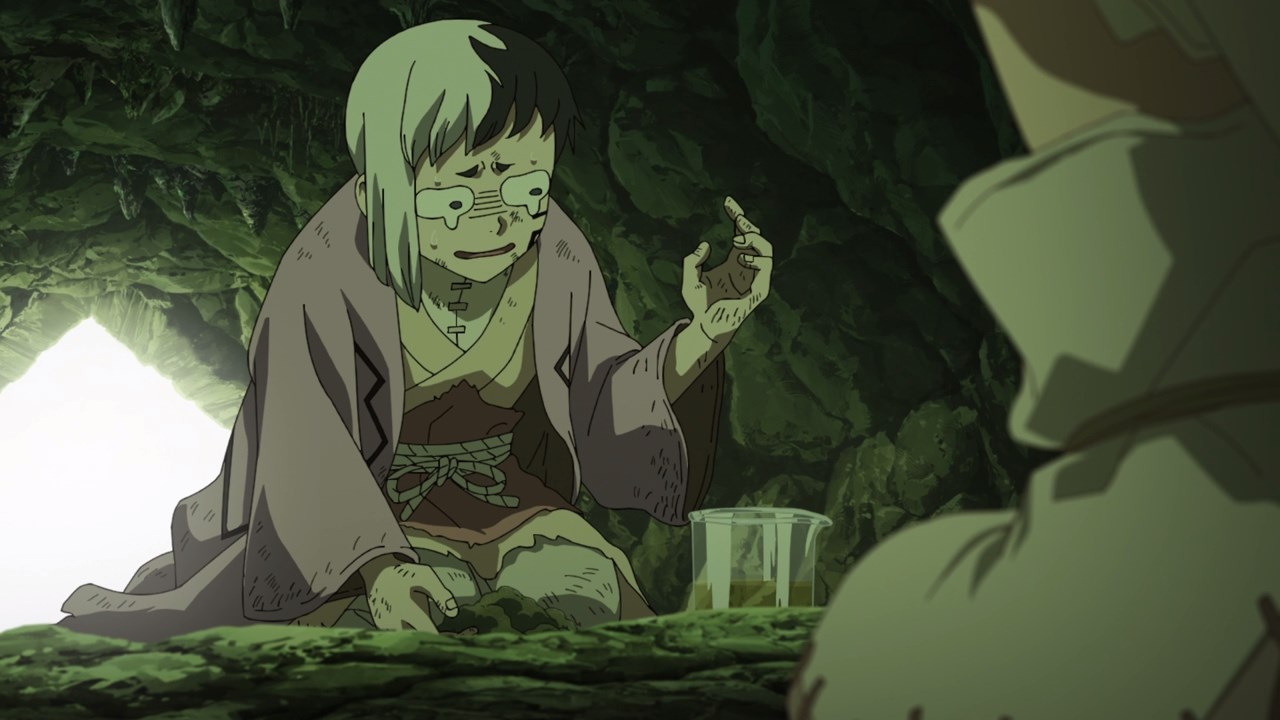 Let’s move onto the Miracle Cave in which Senku and Gen Asagiri are trying to create something from bat guano. Heck, they even mix droppings into the nitric acid solution to little effect. 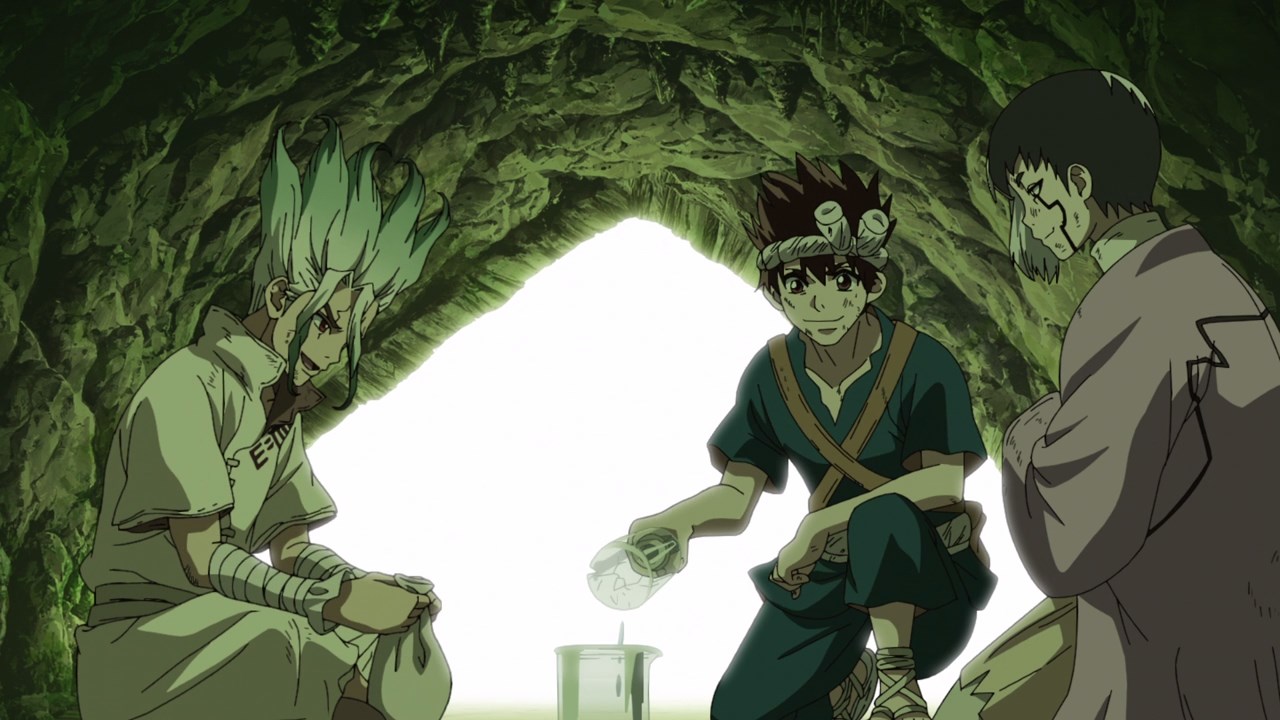 That’s until Chrome brought some sulfuric acid from which he found it from a discarded cannon shell. Of course, they can’t make something useful until Senku took out something from his pocket. 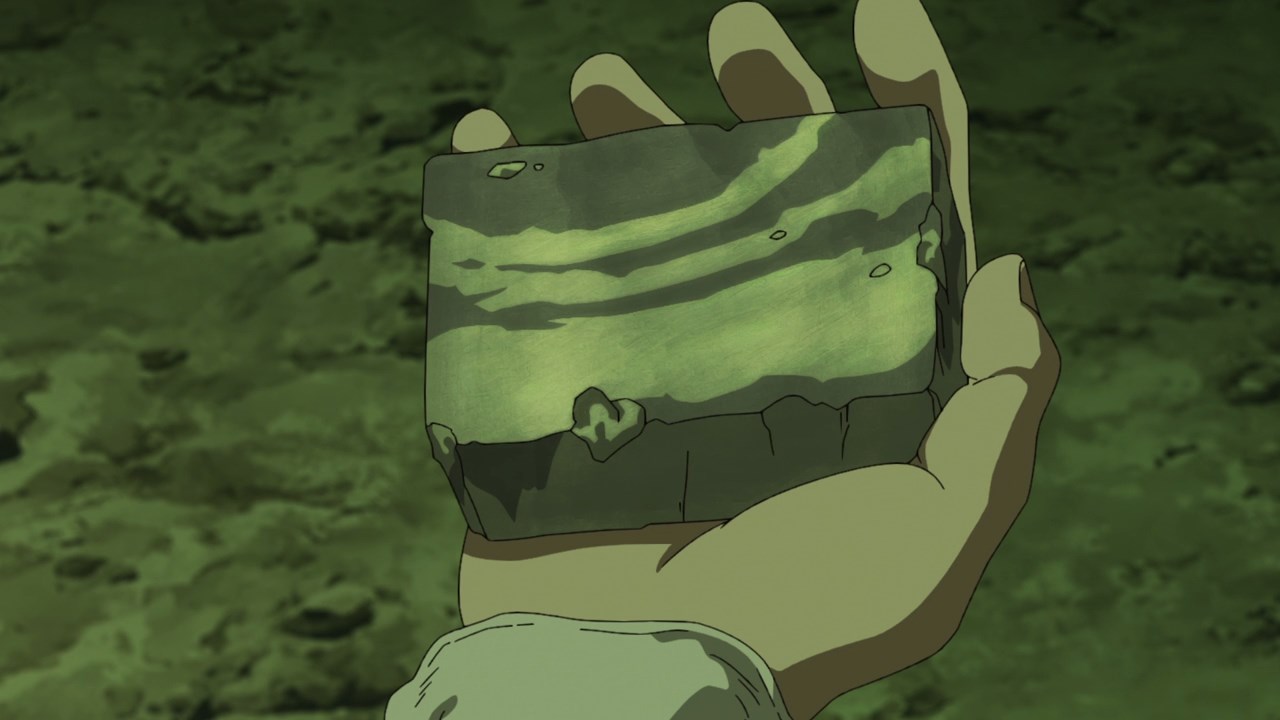 This is soap or should I say a block of glycerin in which Senku will make something that’s powerful than gunpowder. Just hoping that his mixture will work against Tsukasa Shishio. 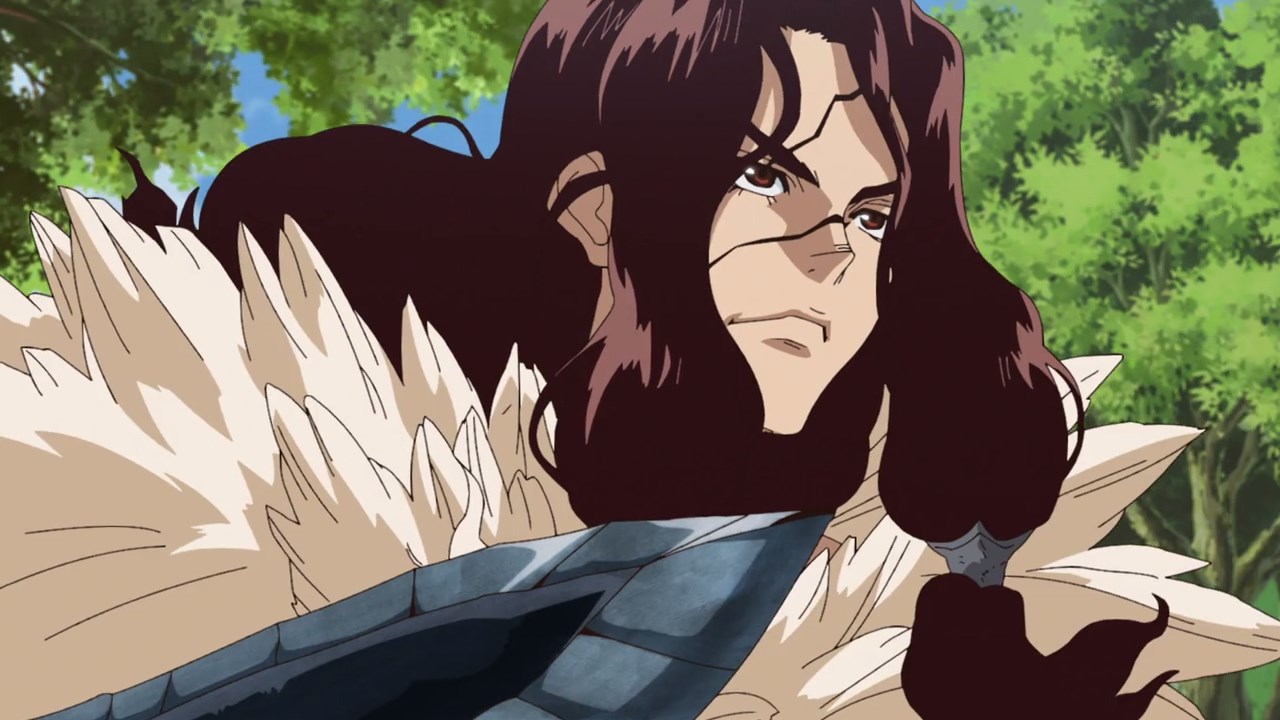 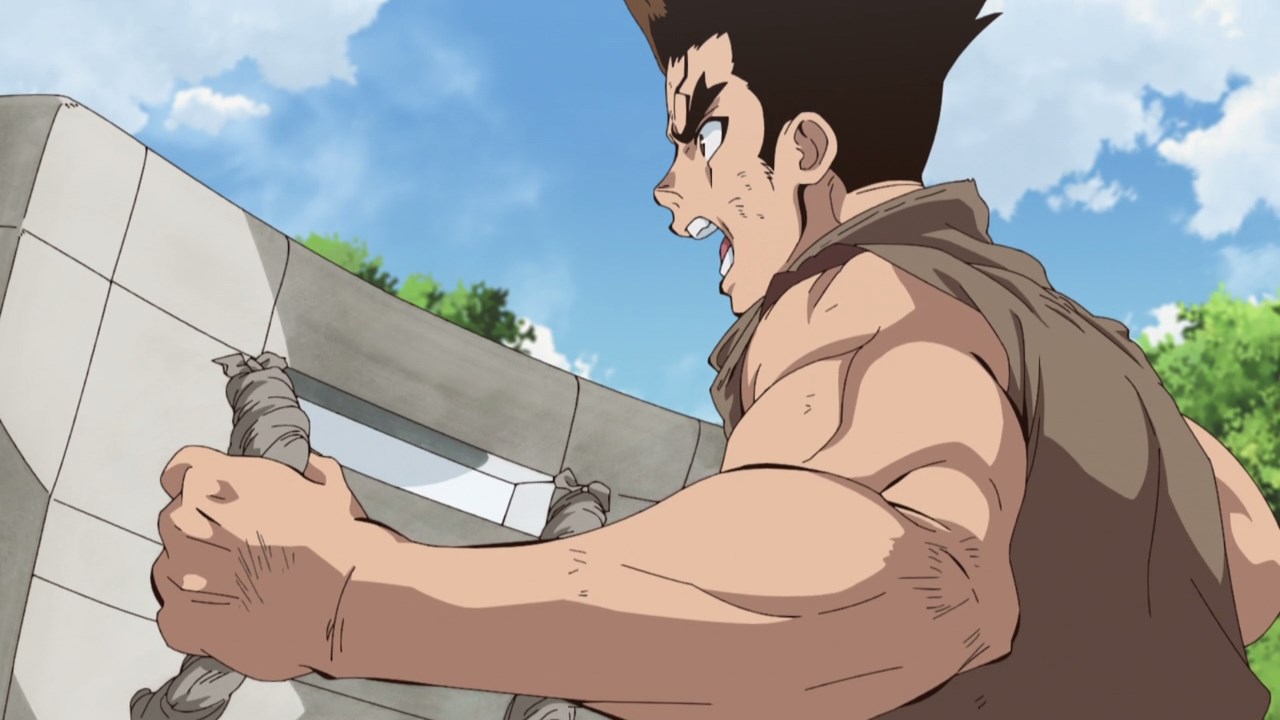 Now let’s return outside the Miracle Cave as Tsukasa Shishio and Taiju Ooki are about to duke it out, although the former might overpower the latter despite Taiju holding a carbon fiber-like shield. 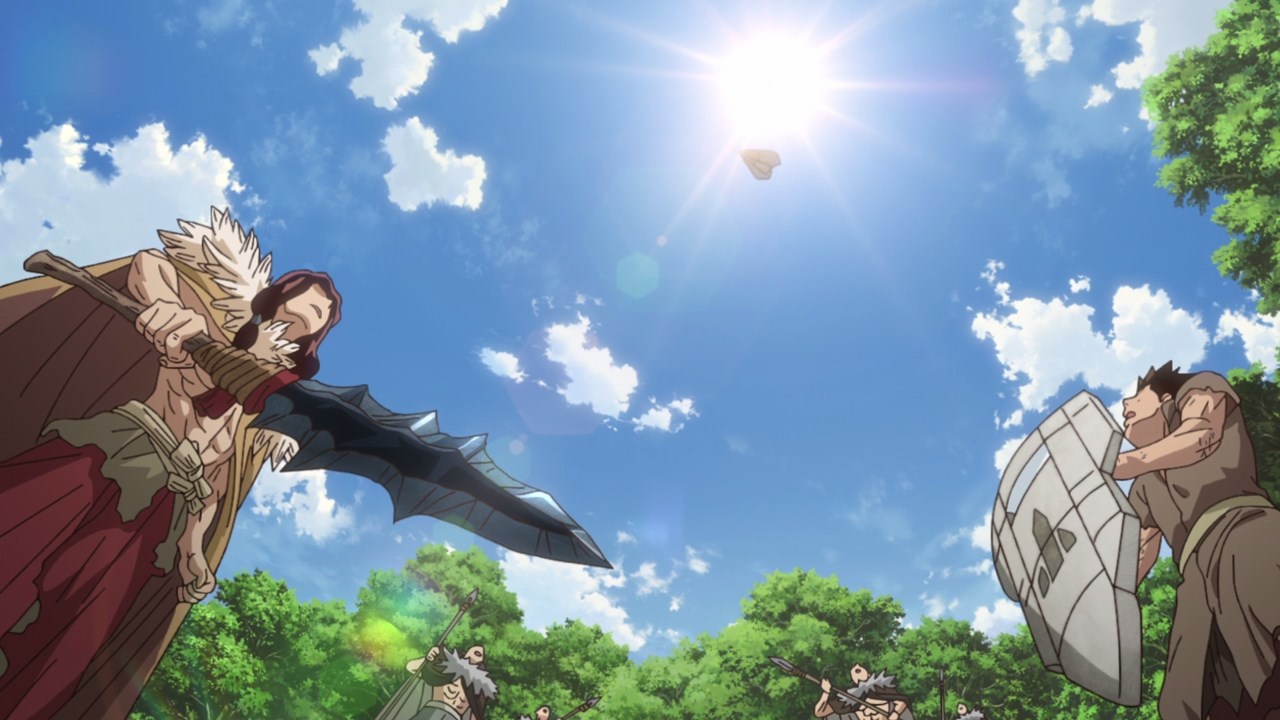 But just as they about to engage in close quarter combat, looks like Shishio and Ooki saw a paper airplane flying around the battlefield. Okay, who would throw an airplane in a middle of a fight? 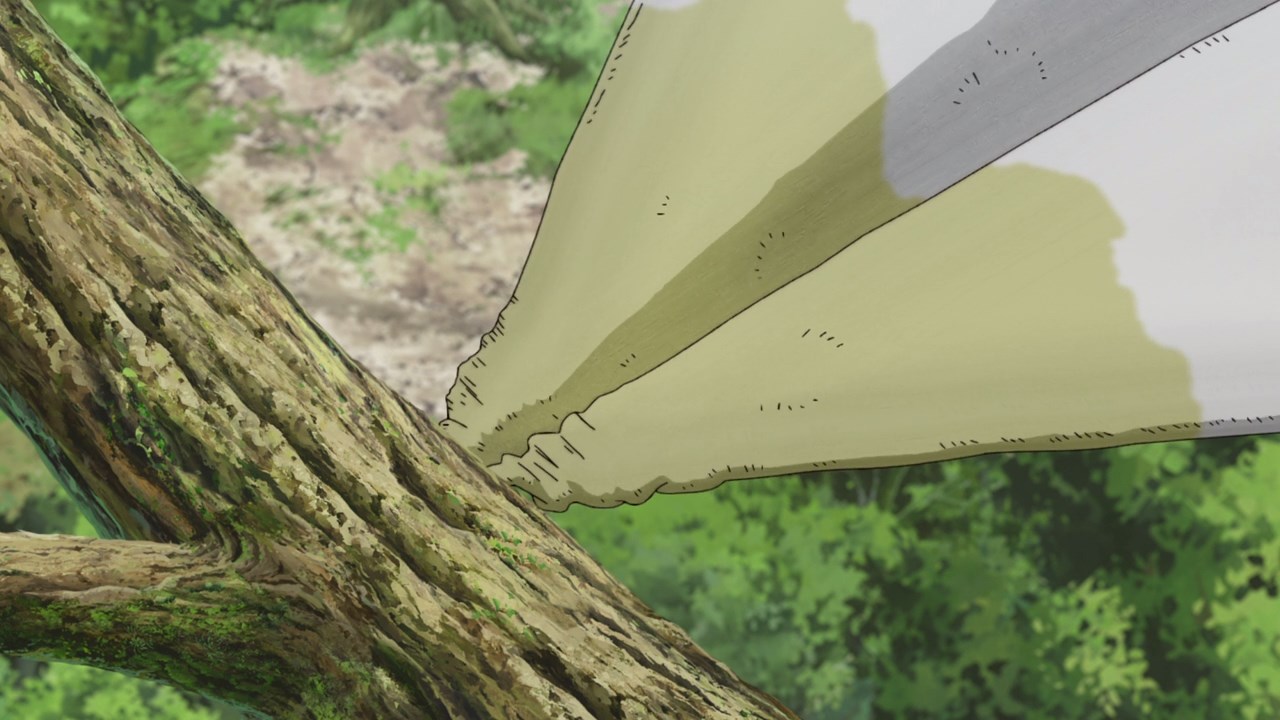 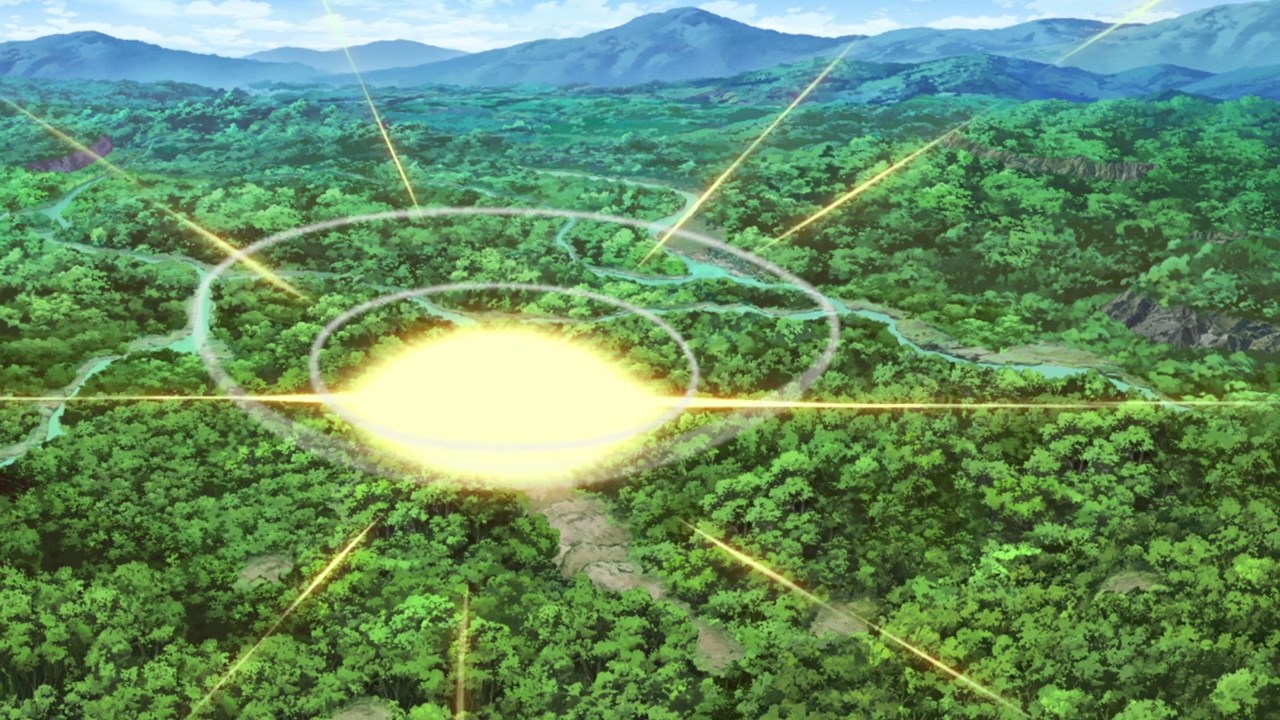 However, this paper airplane suddenly exploded upon hitting the tree. Okay, did Senku managed to create trinitrotoluene or TNT in this stone world? That’s impossible! 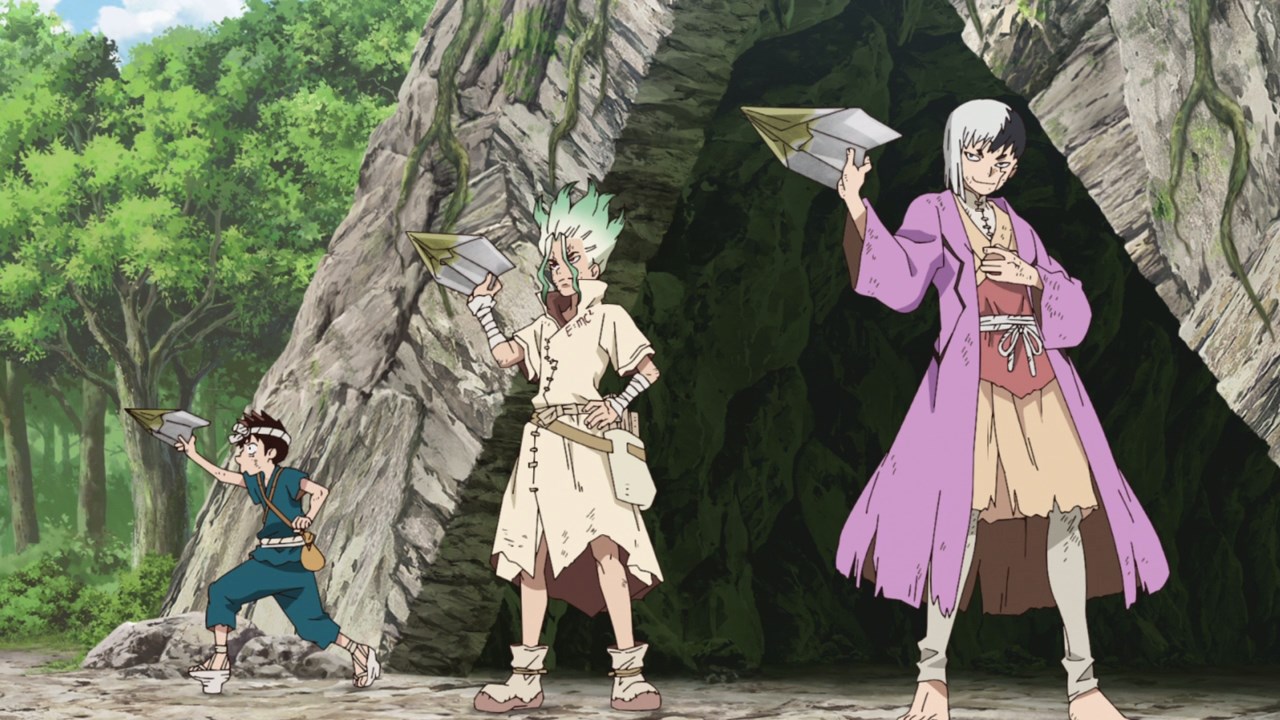 But for Senku and his buddies, they managed to create dynamite in which it’s more powerful than gunpowder, all while being packaged in a paper airplane.

Of course, some of Tsukasa’s men are not convinced that those airplanes are soaked in TNT fluid. 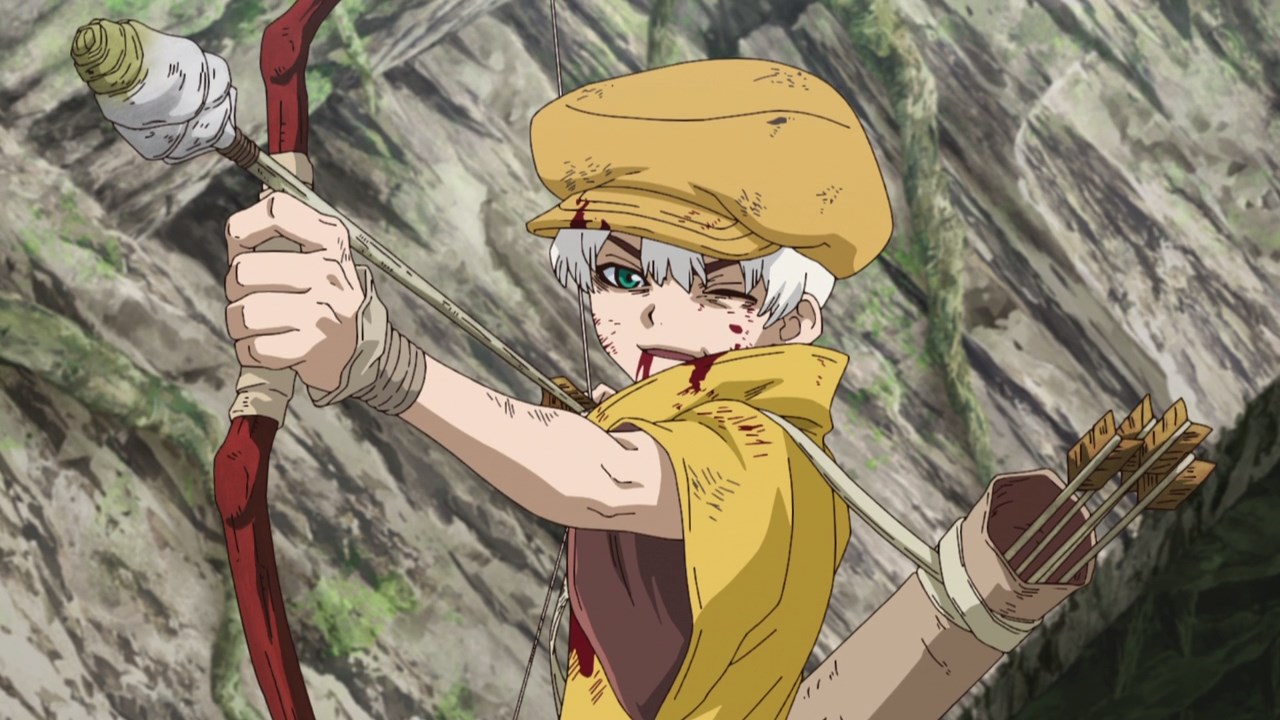 That’s until Ukyo Saionji showed up where he not only survived from Hyoga’s spear attack, but Ukyo is equipped with explosive arrows which is far deadly and intimidating to use. 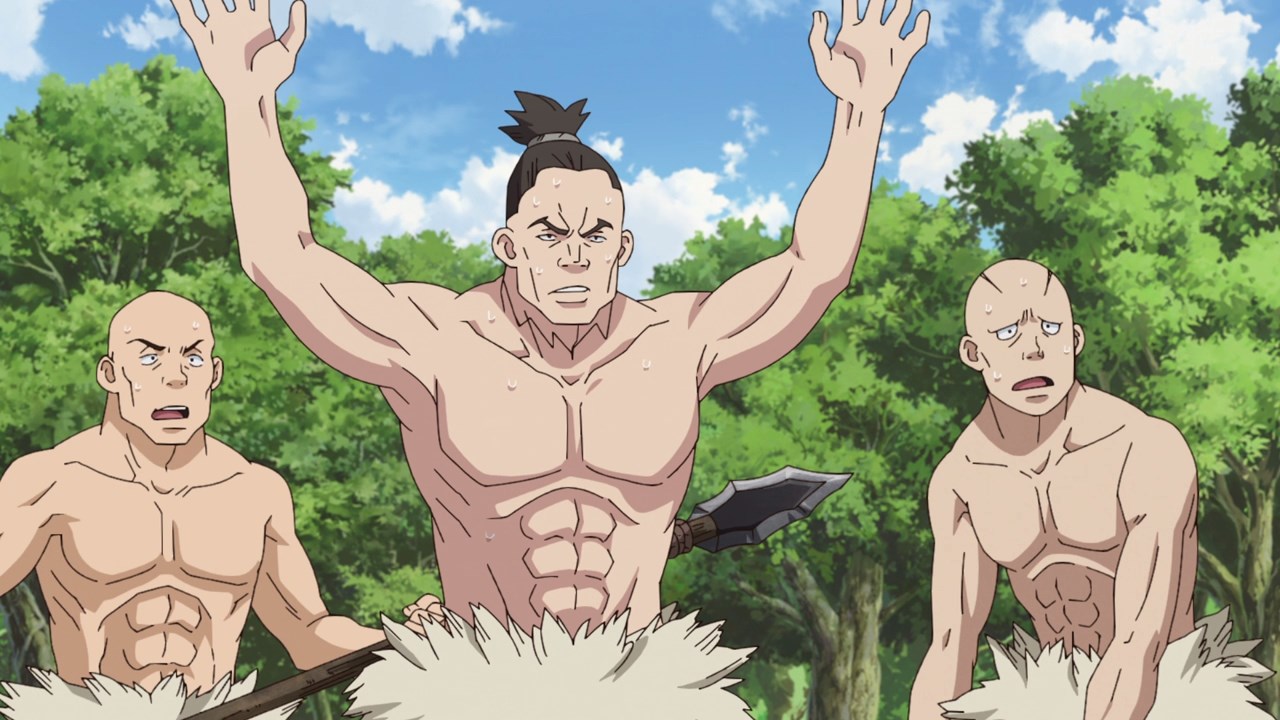 Well then, I guess it’s checkmate for the Empire of Might as there’s no way they can survive when the Kingdom of Science have TNT-tipped arrows and paper airplanes. 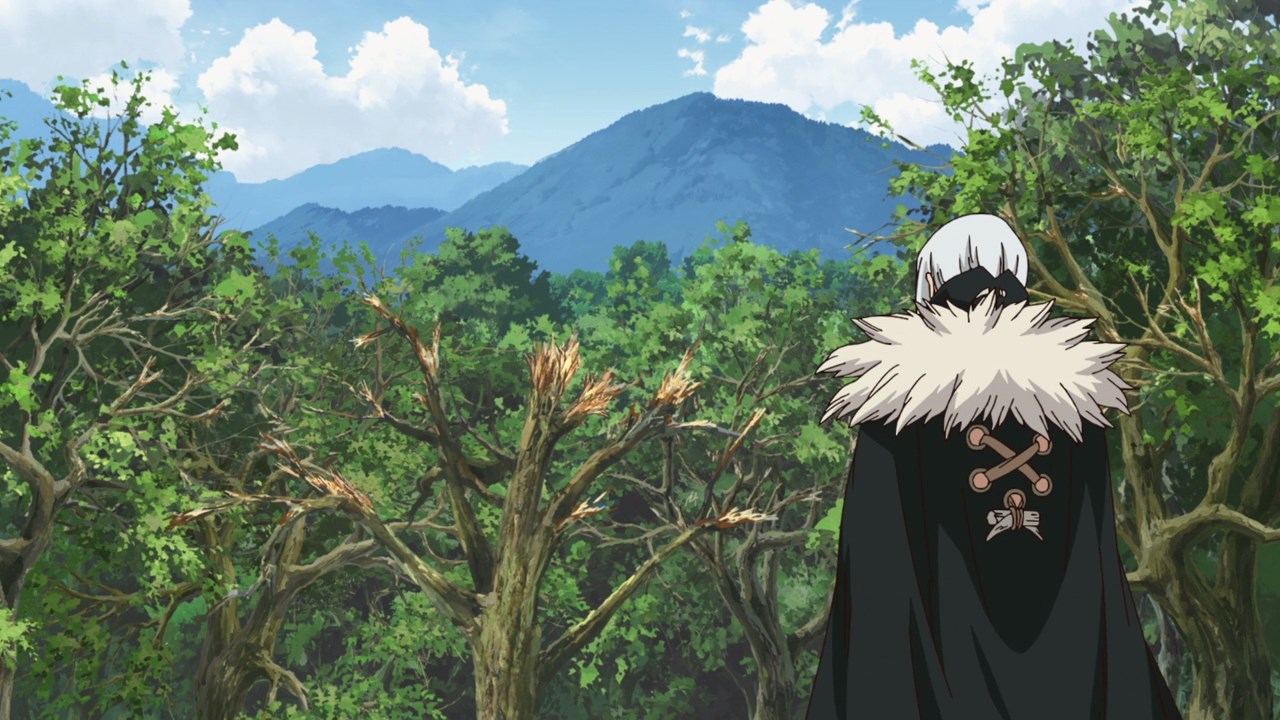 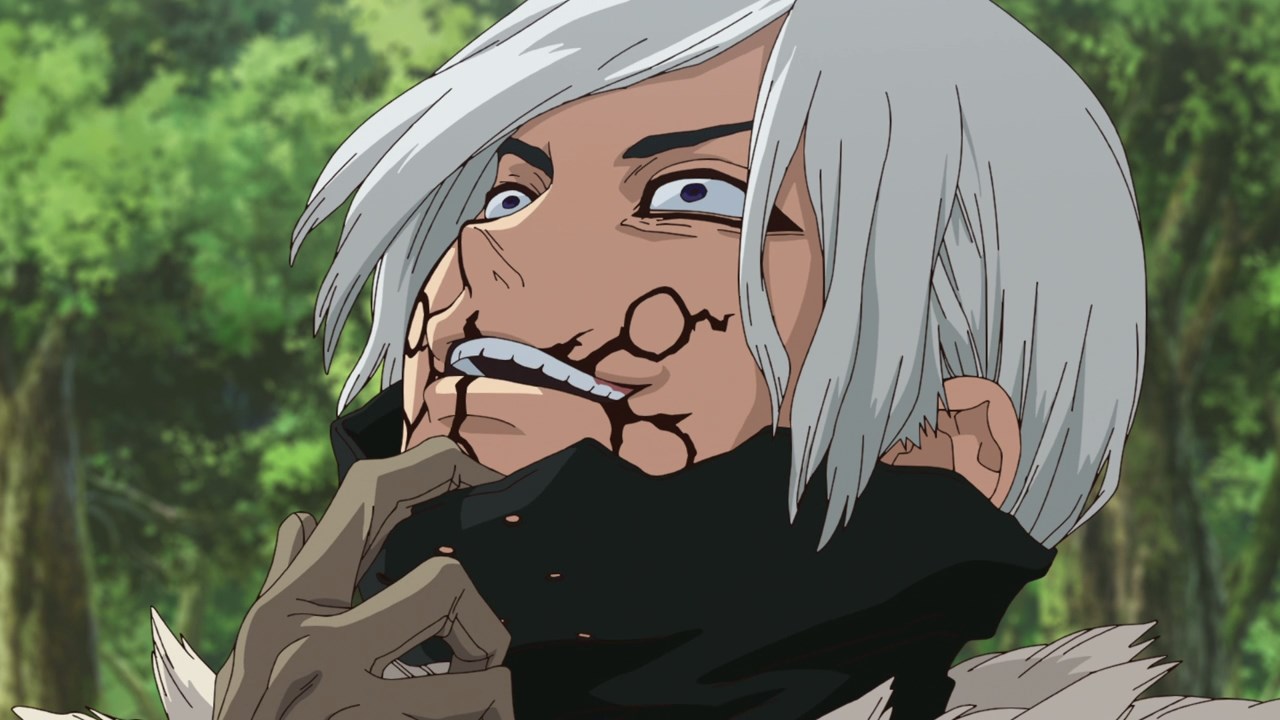 On the other hand, there’s Hyoga where he’s mesmerized by the power of dynamite. Oh I bet that he’s gonna steal some TNT from Senku in order to kill both him and Tsukasa Shishio. 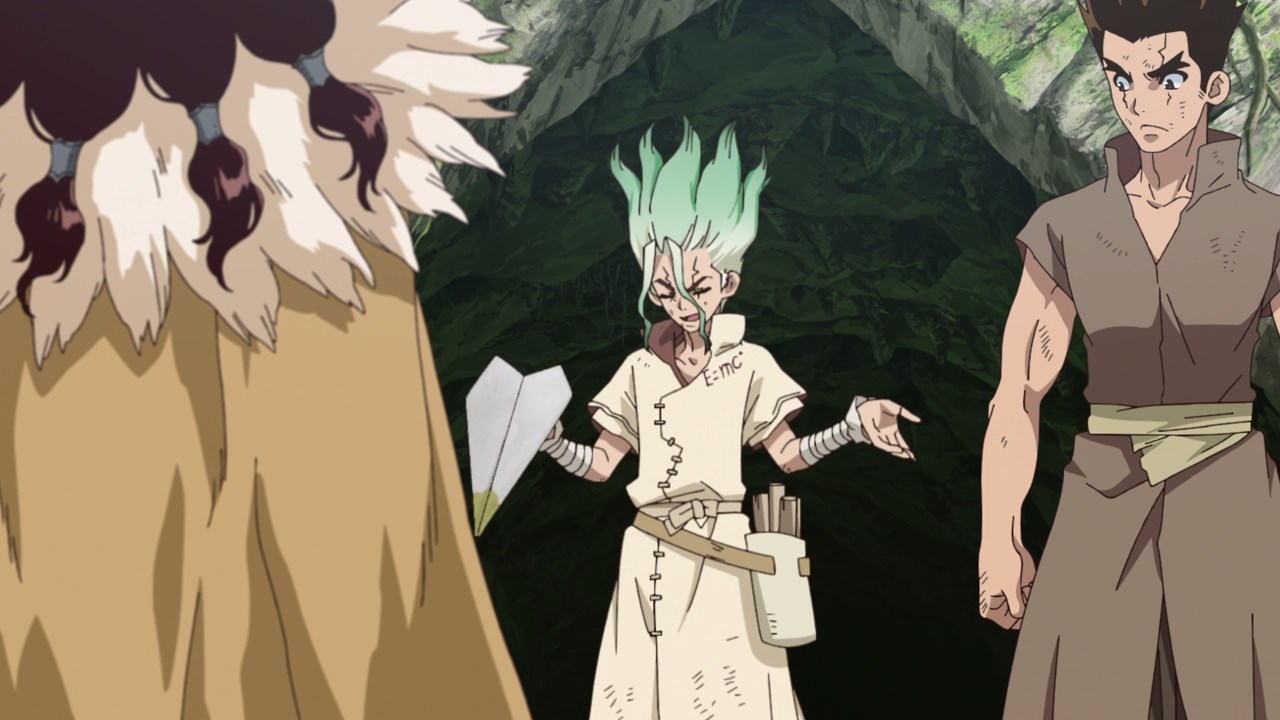 But let’s return to Senku where he’s not gonna destroy the Empire of Might with dynamite. In fact, he wants a peace negotiation with Tsukasa Shishio as they don’t want anyone to die.

On the other hand, I think the reason why Tsukasa Shishio wants to stop Senku from reviving modern civilization is because he’s fighting for someone dear to him. 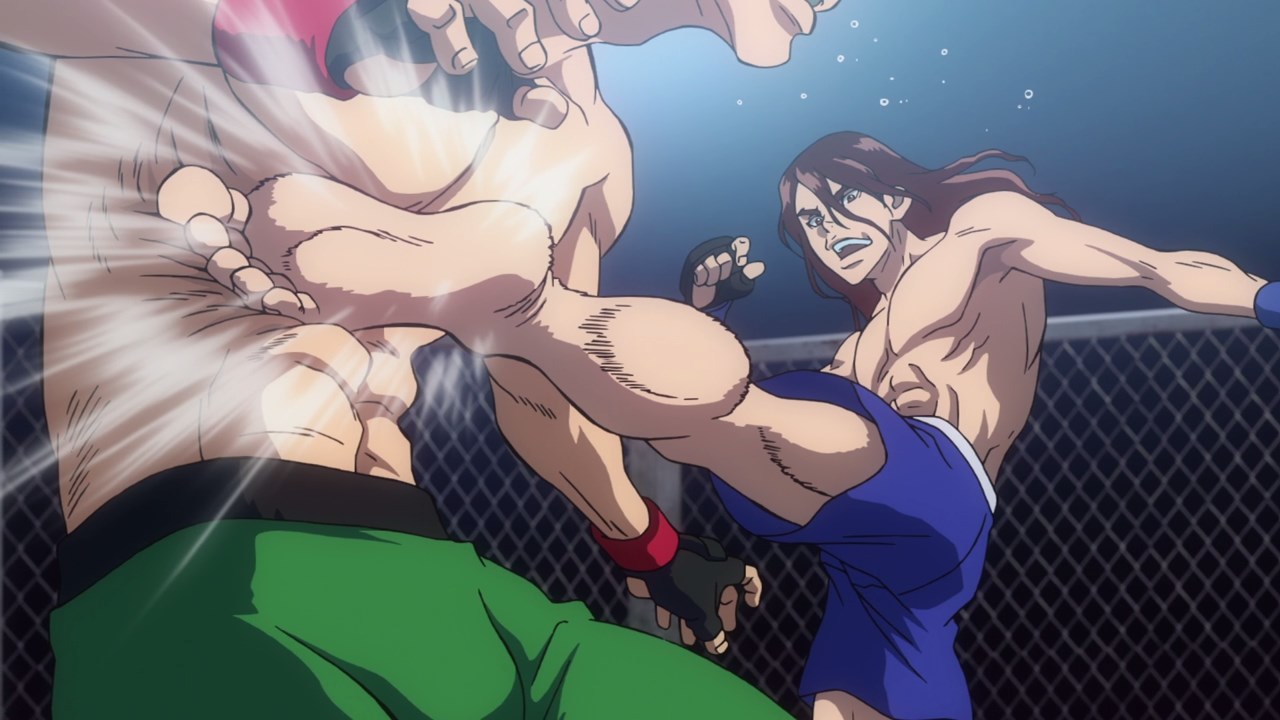 Speaking of Tsukasa Shishio, he took up mixed martial arts and fought various fighters, earning lots of money and the title of the “strongest primate high school student”. But here’s the catch… 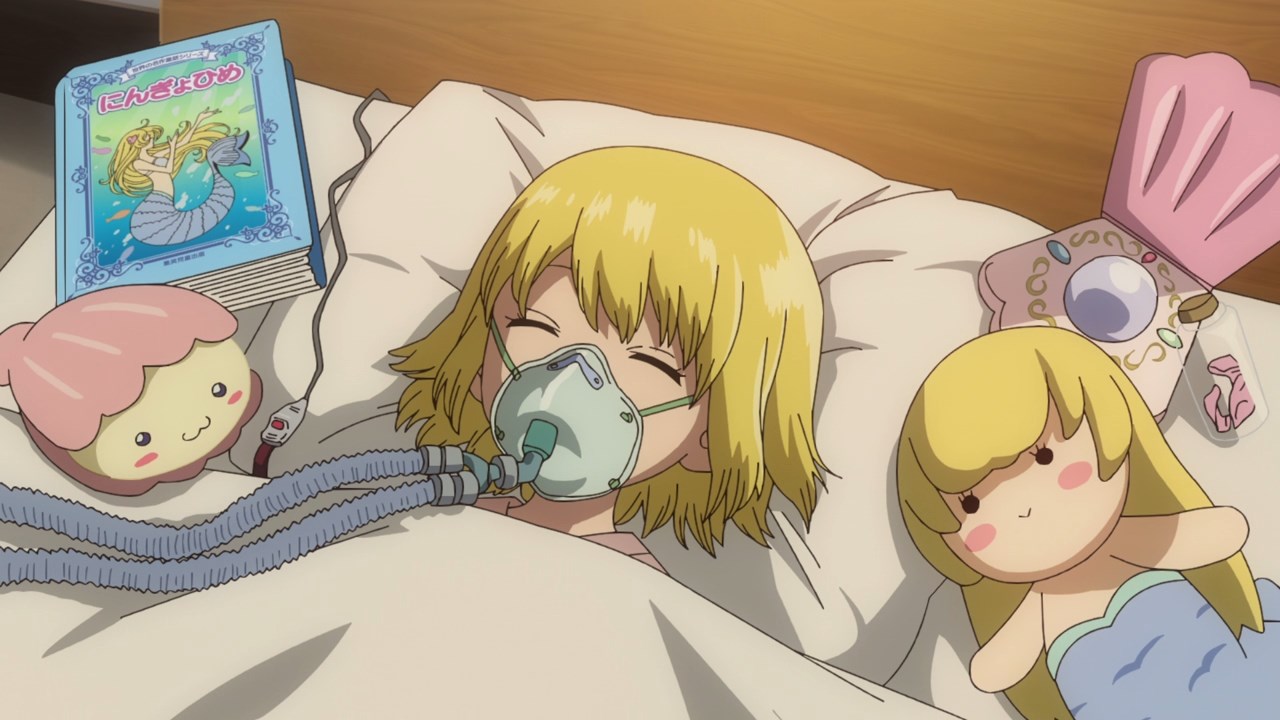 You see, Tsukasa is fighting for his sister Mirai in which she’s in a coma, therefore he’s earning money for his sister’s surgery in which it didn’t happen after everyone got petrified.

Of course, Senku still believes that Mirai is still alive somewhere and he can possibly revive Tsukasa’s little sister with the power of science. C’mon, Tsukasa should put some faith on Senku. 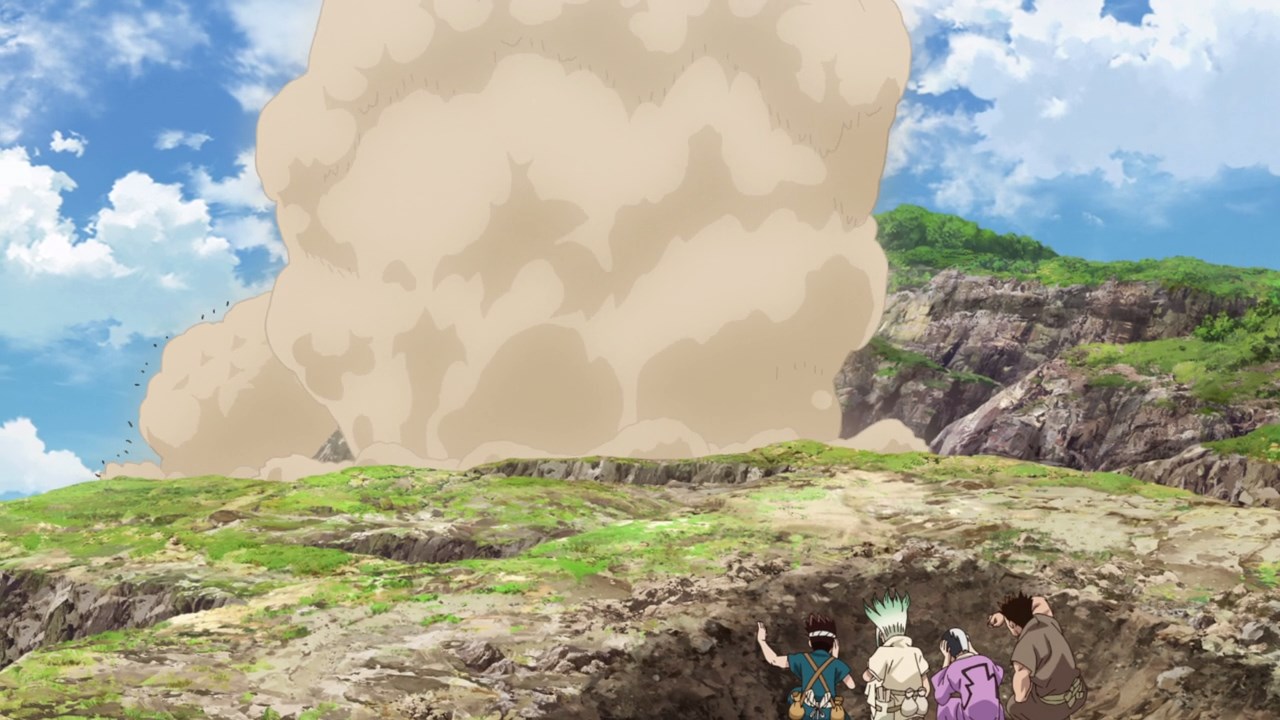 Unfortunately, the most difficult part will be finding Mirai’s petrified body. Even more difficult is that Senku and his buddies are using dynamite to blow up lots of dirt.

Um Senku, Yuzuriha Ogawa will be very angry if she’ll do the impossible task of putting back those petrified bodies together if you accidentally blow them up. 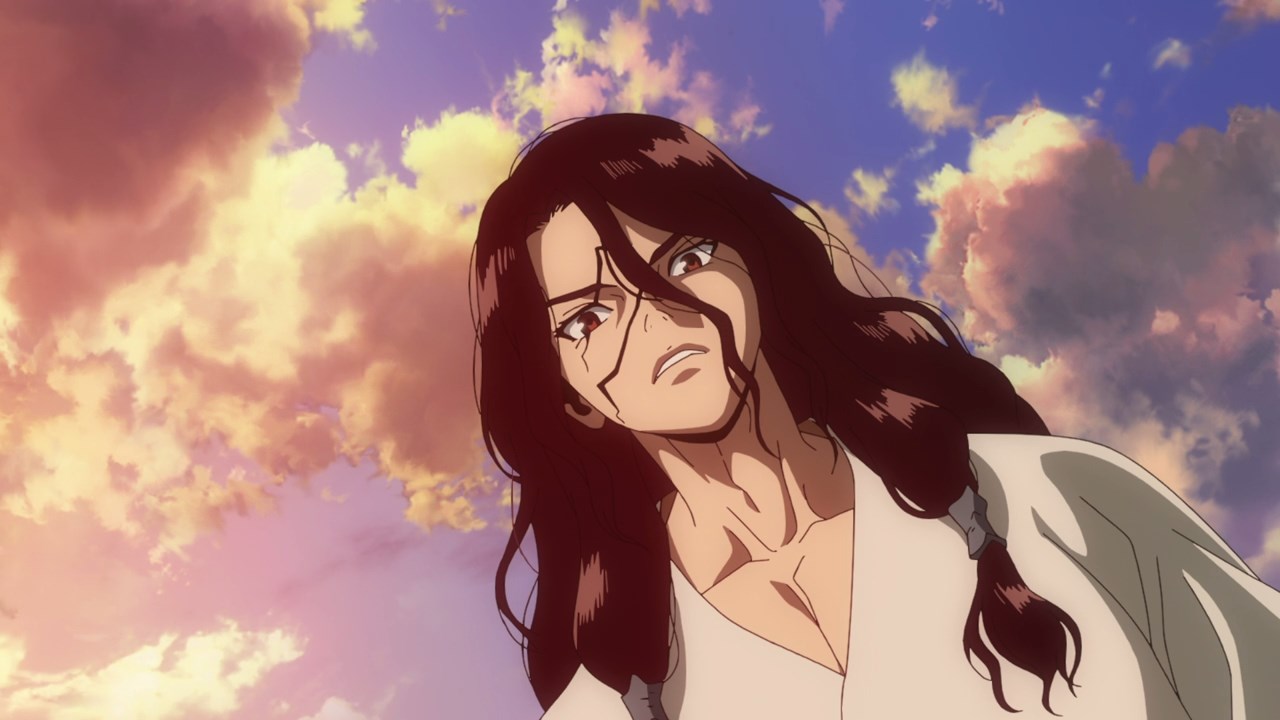 Luckily, they found the jackpot as Tsukasa Shishio can’t believe that his dear sibling is alive, albeit she’s still petrified. 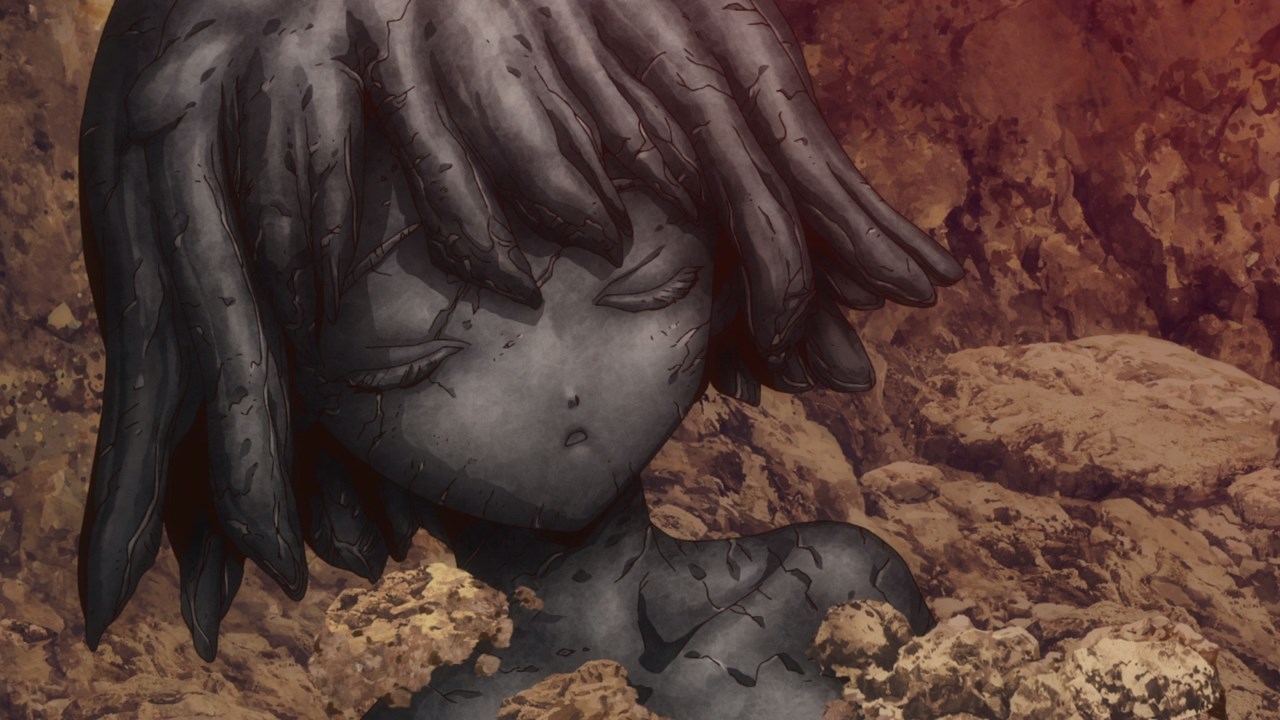 Of course, the only thing I fear is that Hyoga might kidnap Mirai in hopes on bringing both Tsukasa and Senku down.

Anyways, I’ll see you next time and while it’s very likely that Hyoga will betray everyone, I wonder what Senku’s plan on reviving Mirai from her coma?