Let’s start this episode with Rin Shima where she’s really tired after traveling to Izu on her scooter.

Currently, Shimarin is at the Dougashima Hot Springs together with her camping buddies, but she looked so wasted after dipping her body into the pool.

As for the rest of them, they’re doing fine but Nadeshiko Kagamihara and the rest are a bit tired after being stuck in a traffic for a long period. But hey, at least they still have some energy compared to Shimarin. 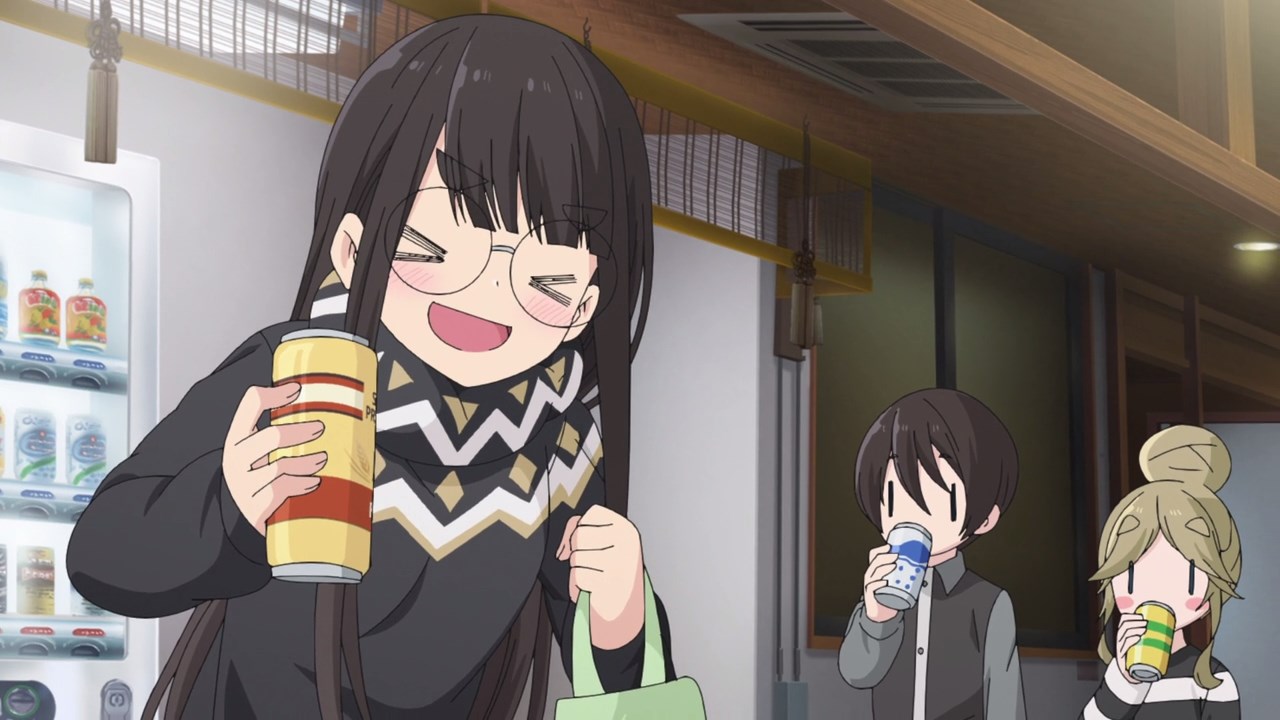 Oh yeah, here’s Minami Toba where she got her swig of beer after arriving at Nishiizu City for so long. Um Toba-sensei, you’re not suppose to drink alcohol since you’re driving. 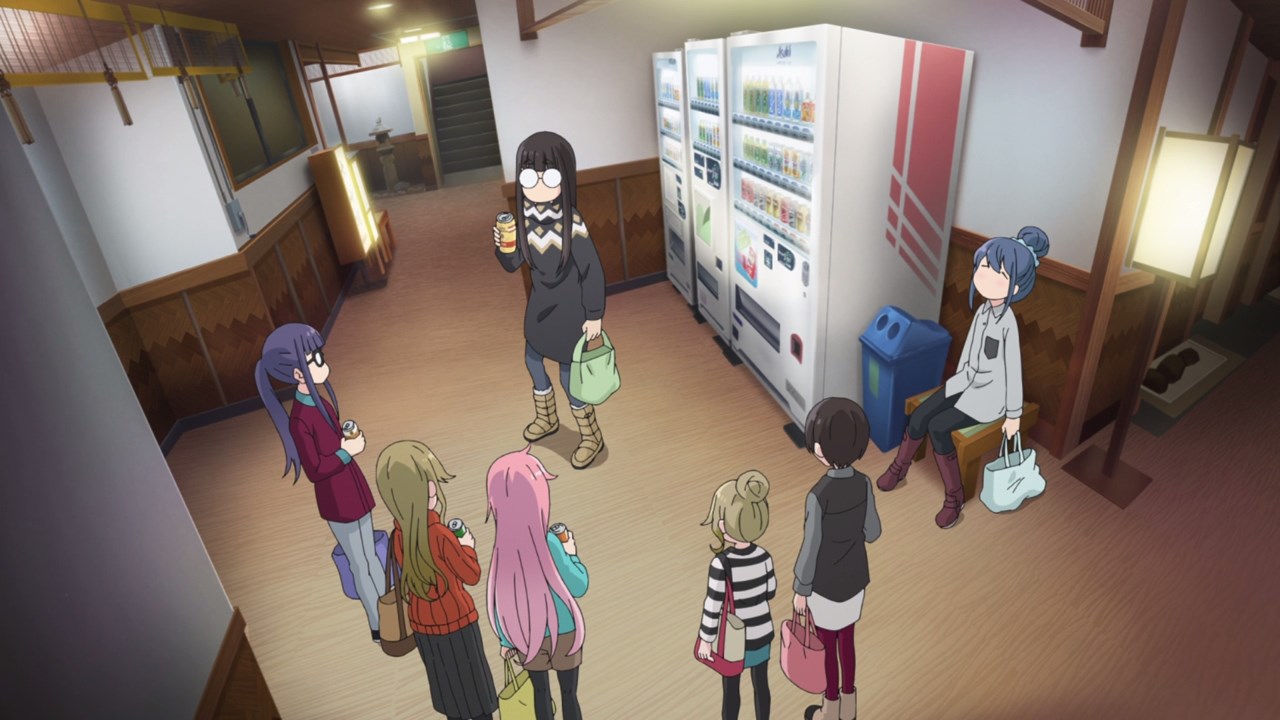 Even Nadeshiko and the rest are stunned that their teacher got drunk where they haven’t arrive at the campsite yet. Well, looks like they’ll have to call the cab then. 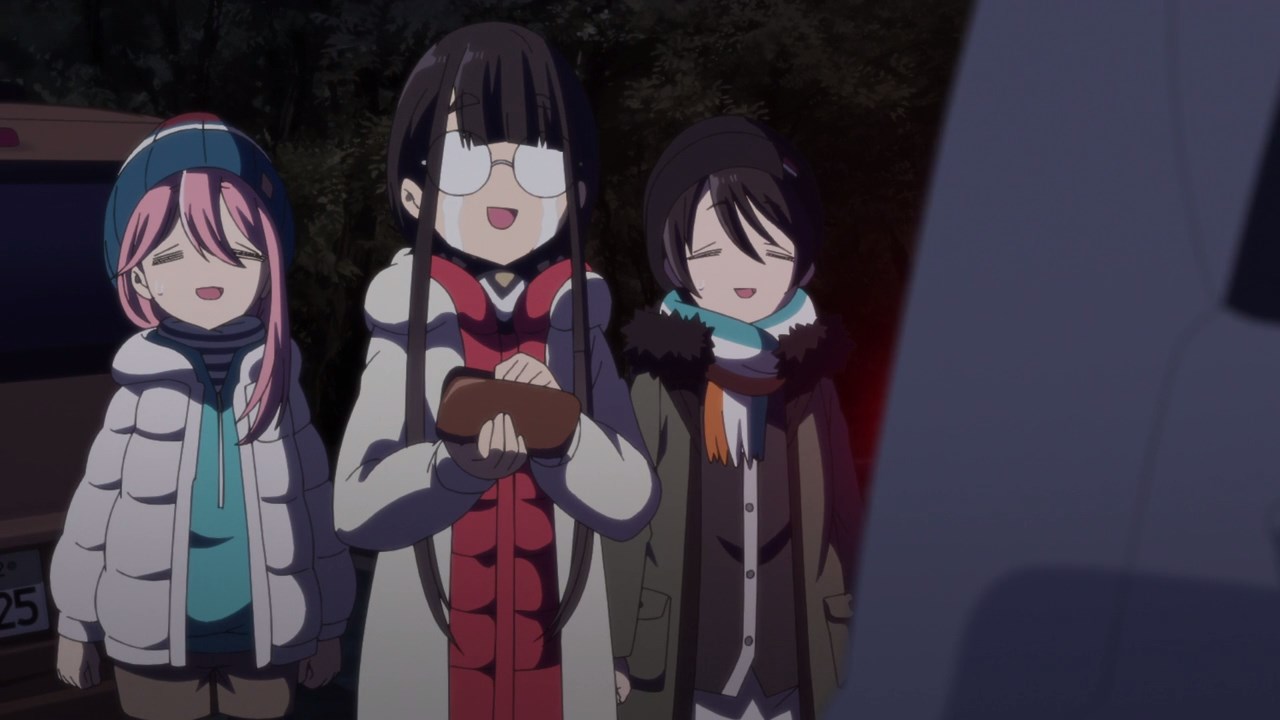 Oh, and Toba-sensei will pay it because she screw it up. Honestly, I think she should save her binge-drinking of booze right after the camping trip. 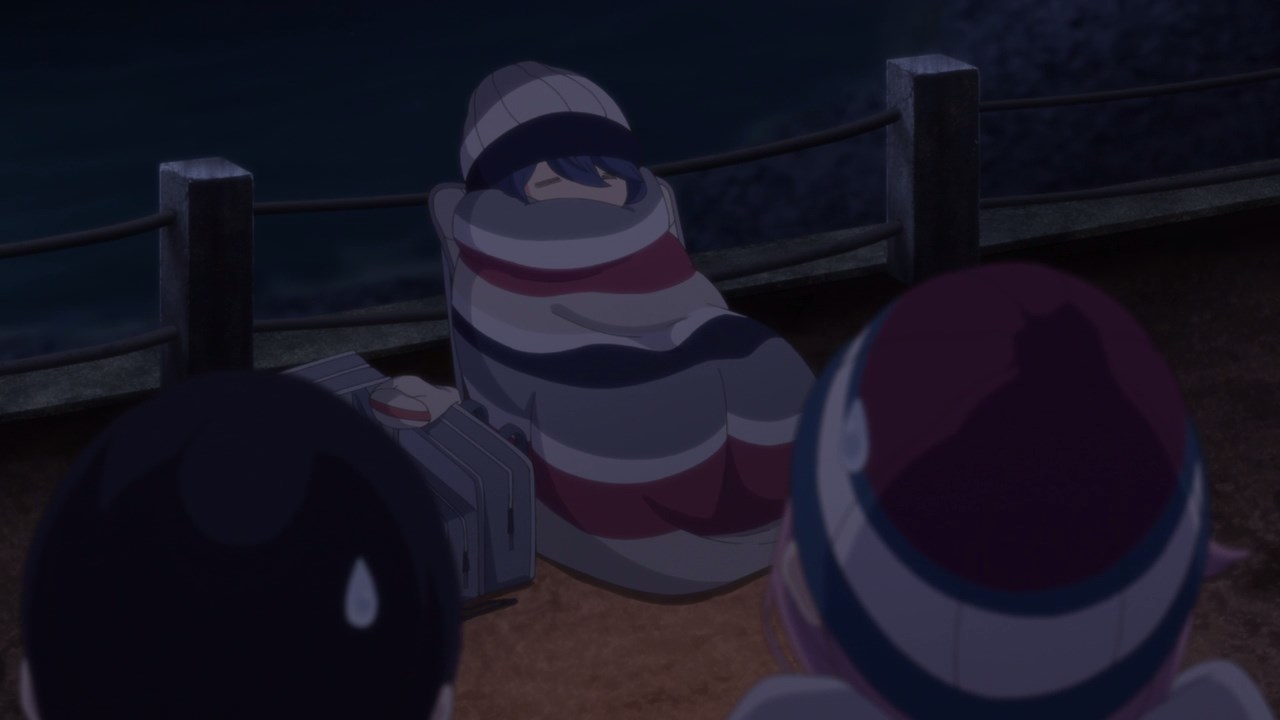 Anyways, they finally arrived at the campsite and it appears that Rin-chan decided to take a good night sleep. Um Shimarin, it’s bad to take a rest on an empty stomach. 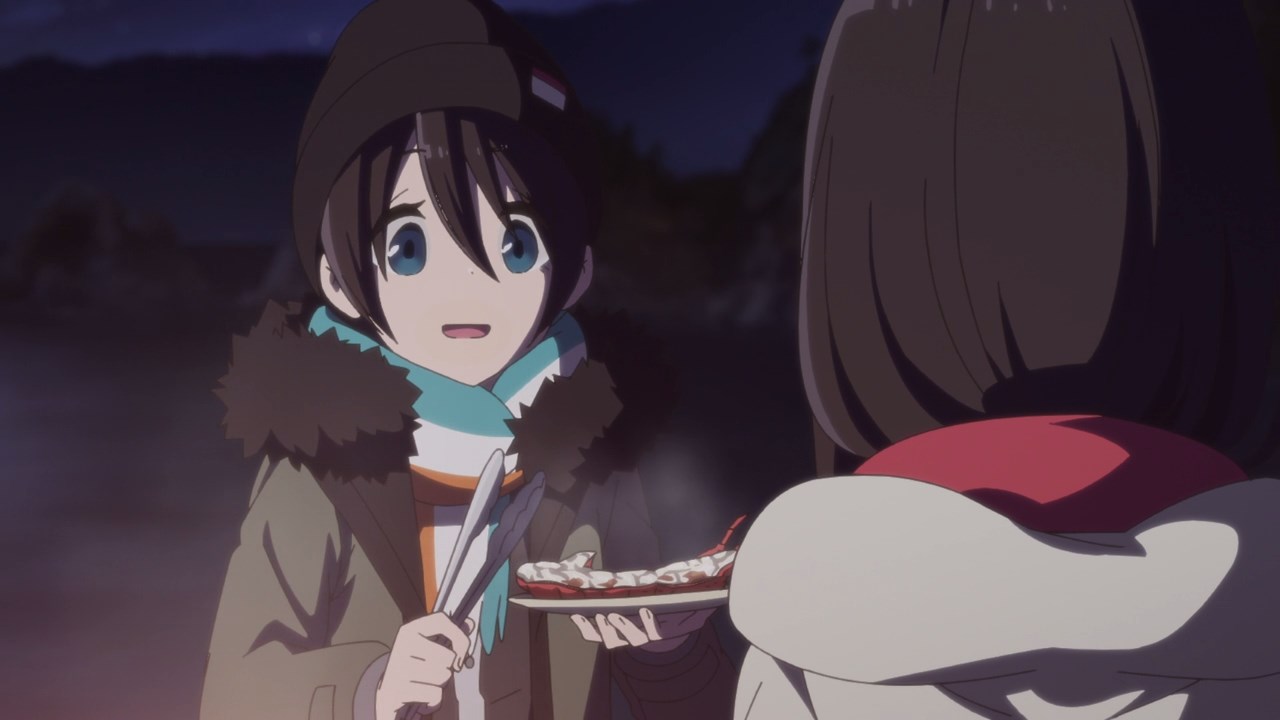 Now then, it’s time for everyone to cook some food for tonight, starting with a plate of char-grilled spiny lobster as Ena Saitou made it for Toba-sensei. 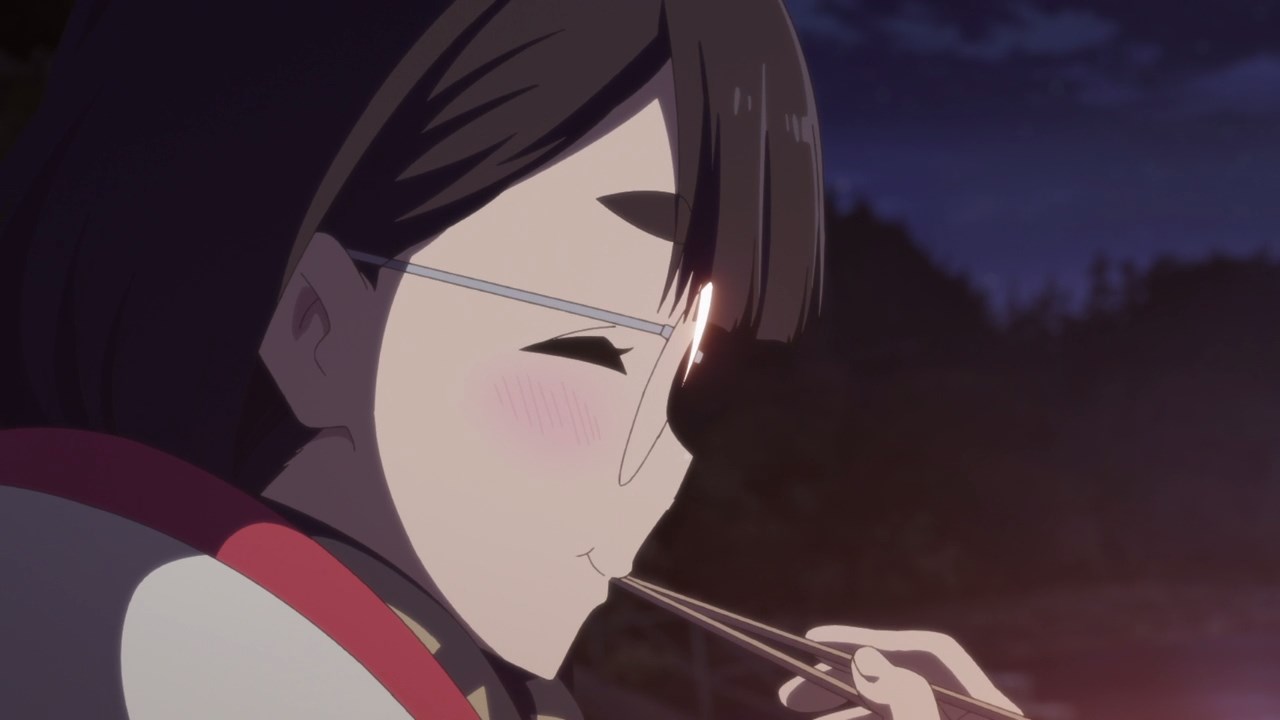 Speaking of Minami Toba, looks like she loves eating some char-grilled spiny lobster as it’s cooked to perfection. 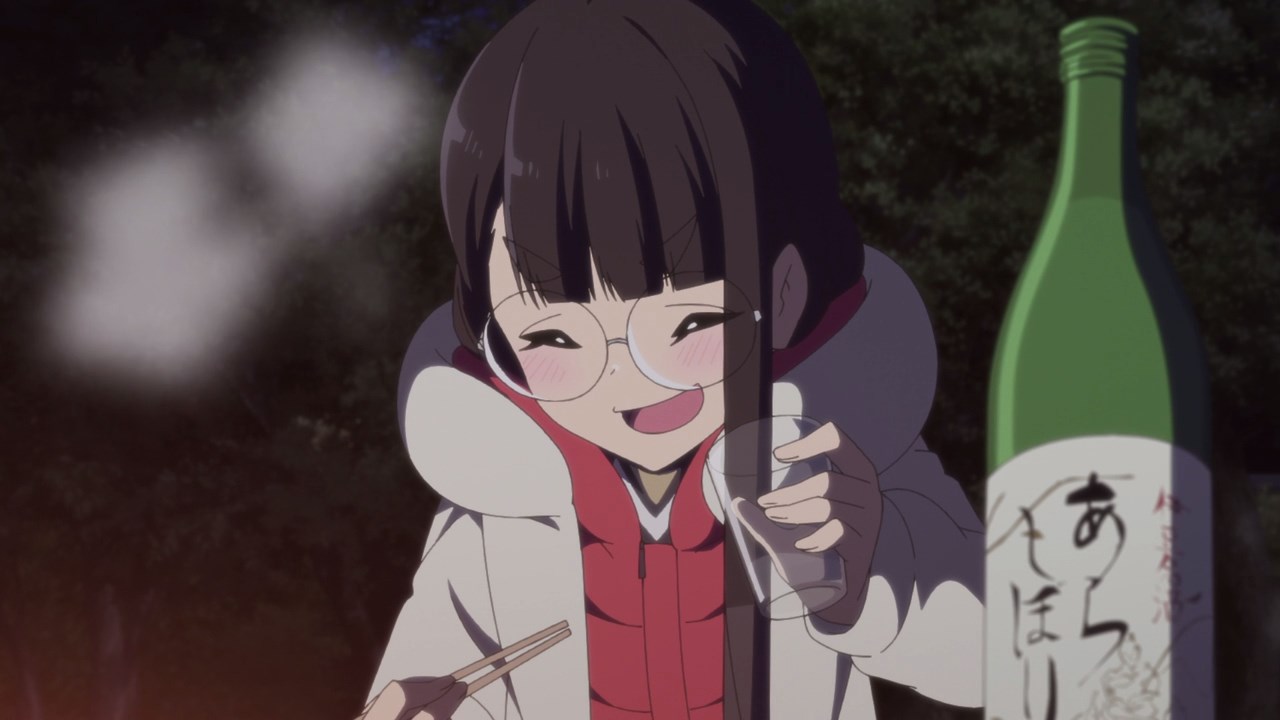 Oh, and it’s a perfect pair for her bottle of Arashibori sake. Of course, Toba-sensei should cut down on her alcohol consumption as she’s gonna drive those kids home. 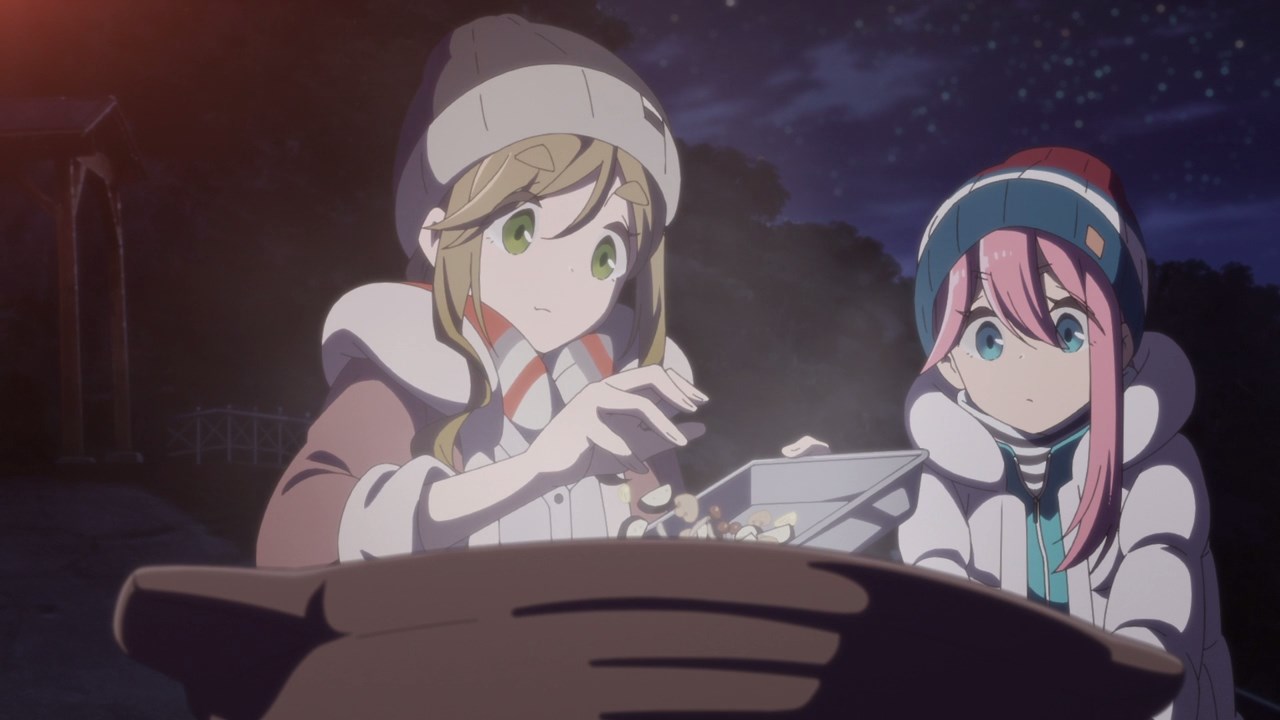 Now it’s onto the main course as Aoi Inuyama and Nadeshiko Kagamihara are cooking ajillo on a large earthenware pot.

Of course, they’re not gonna use the alfonsino that was bought from the previous episode ’cause that would be saved for later. 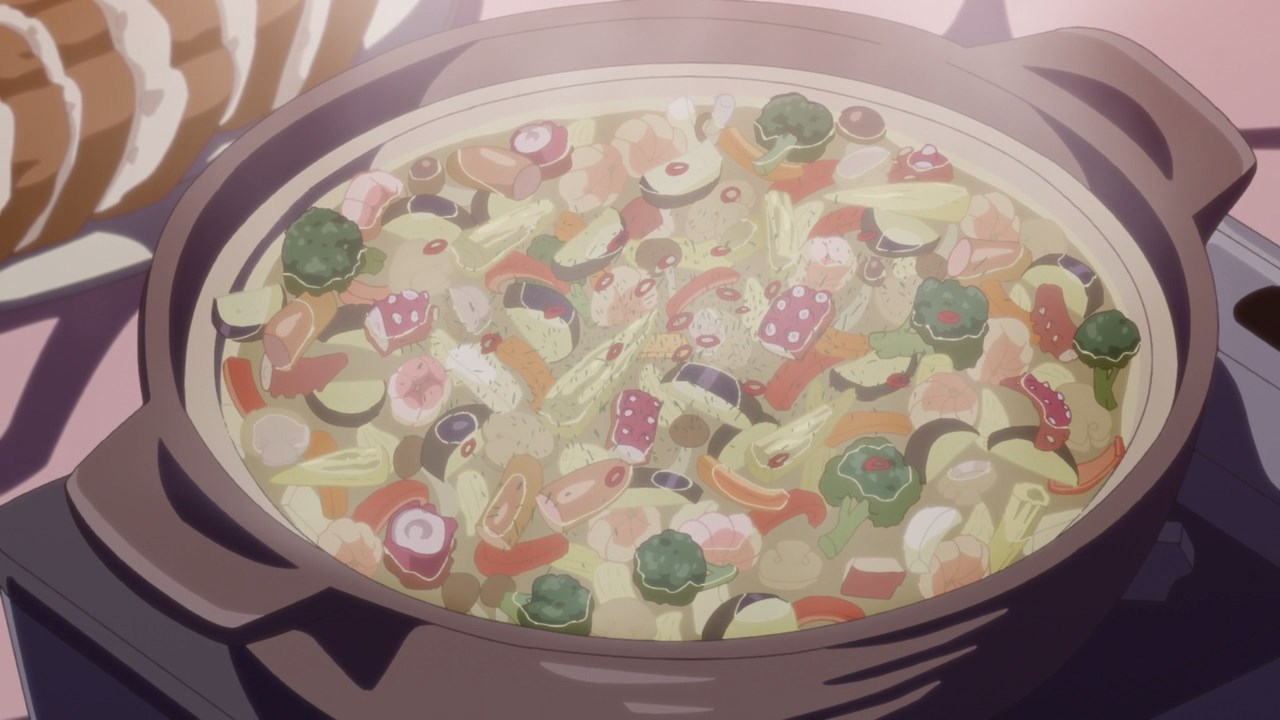 But here’s the chunky ajillo where I have to say that it’s gonna be very delicious. 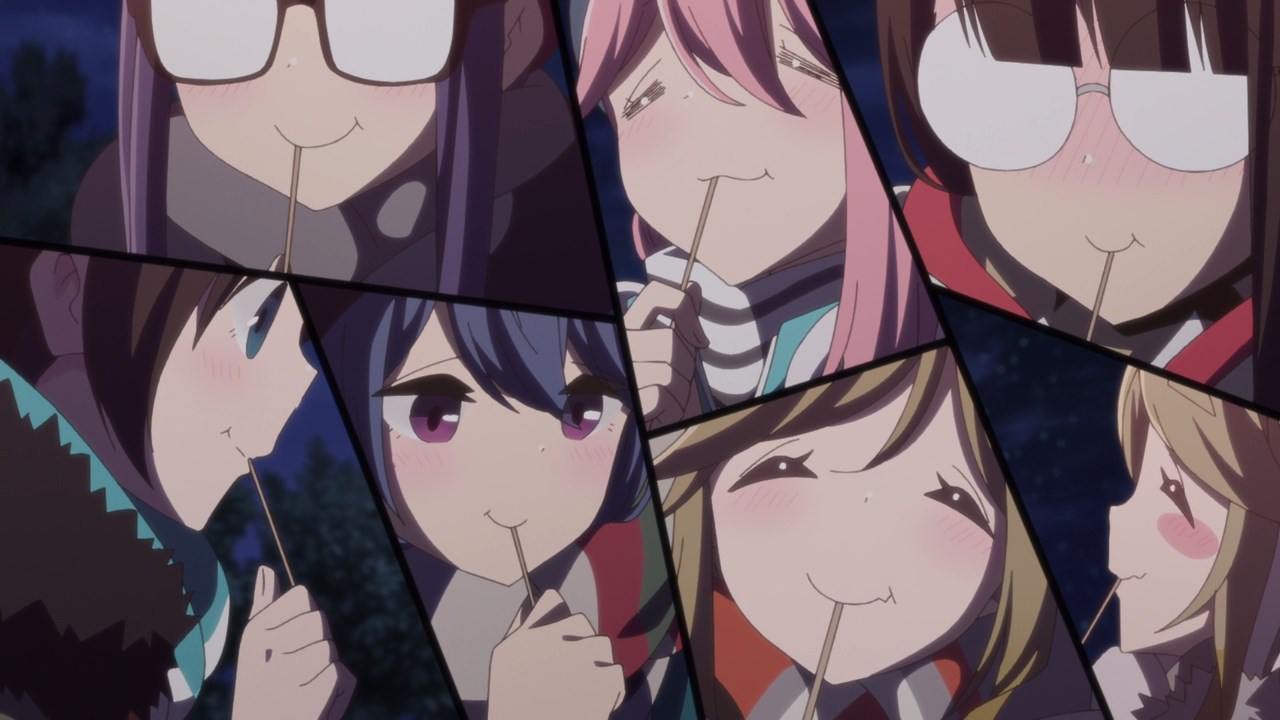 And sure enough, everyone loves eating the chunky ajillo. Oh yeah, I would like to correct myself but this is not the main course, this is just an appetizer. 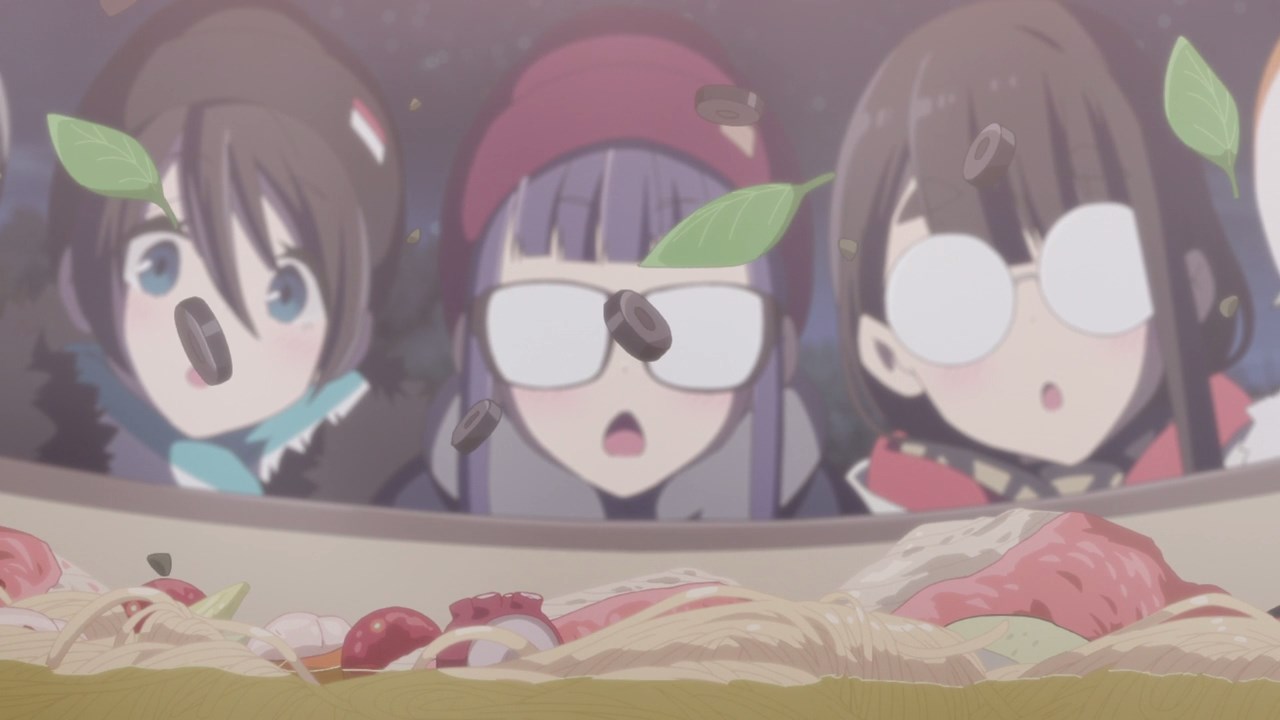 For you see, Nadeshiko is gonna cook some pasta using leftover ajillo and alfonsino. Now all she needs is to add more ingredients such as basil and black olives in order to finish the main dish. 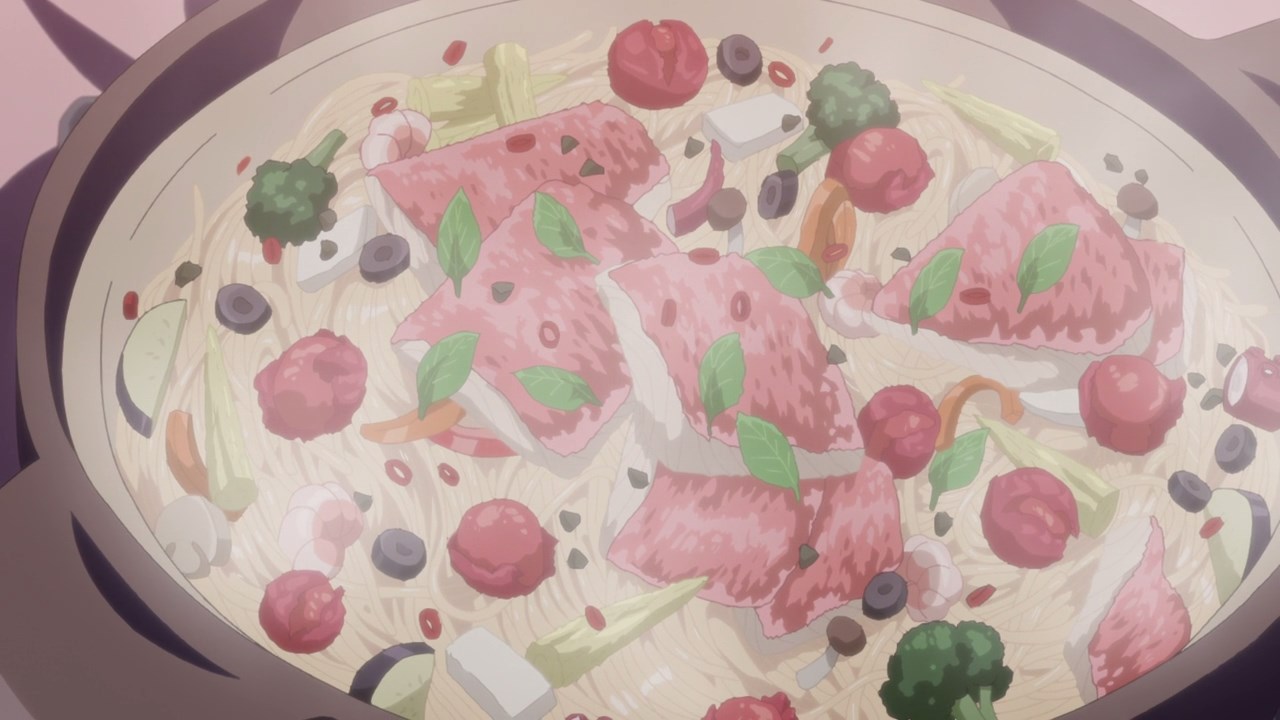 Anyways, here’s Nadeshiko’s alfonsino acqua pazza pasta and I have to say that it she made a scrumptious dish for this camping trip. 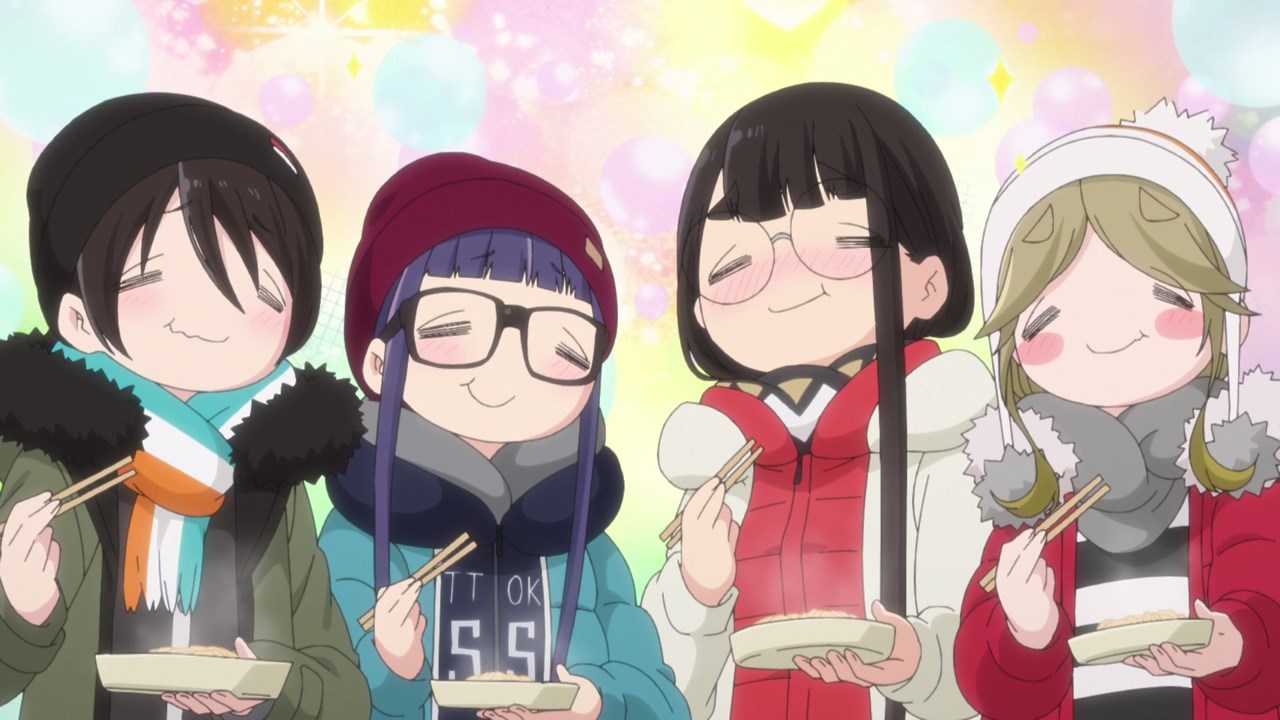 But as you can see, everyone loves eating the alfonsino pasta. With that said, everyone is satisfied with the food but the night is still young. 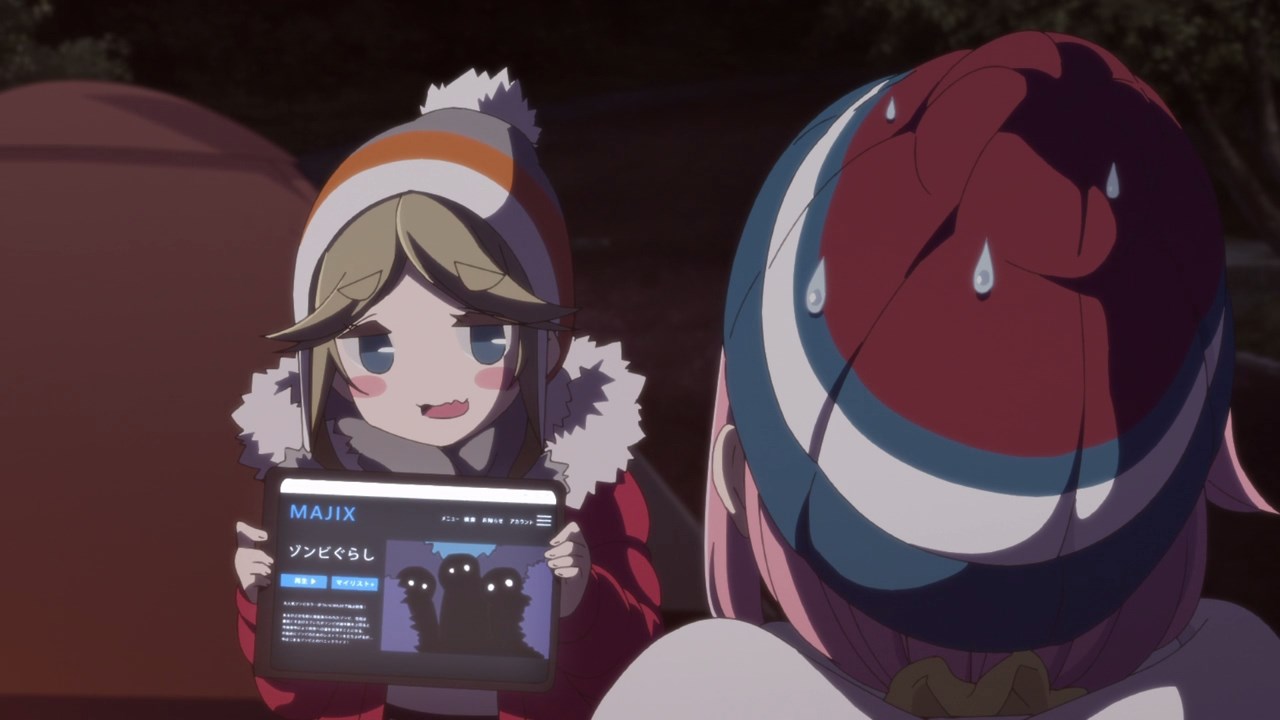 In fact, Akari wants to watch a horror movie before hitting the bed. Then again, there’s Nadeshiko where she’s uncomfortable when watching horror films, especially squeamish once. 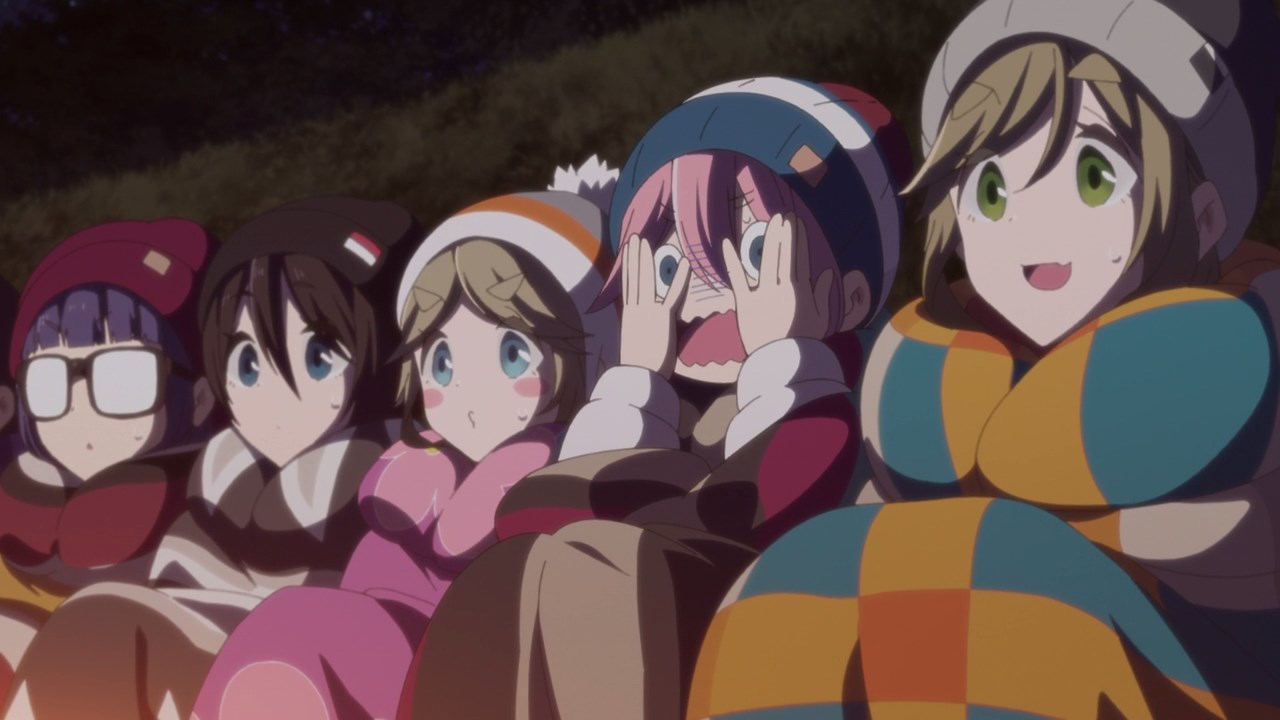 Well then, looks like everyone is watching a horror film together, although Kagamihara will have nightmares upon watching it.

By the way, Rin Shima went to bed early since she’s really tired after all. 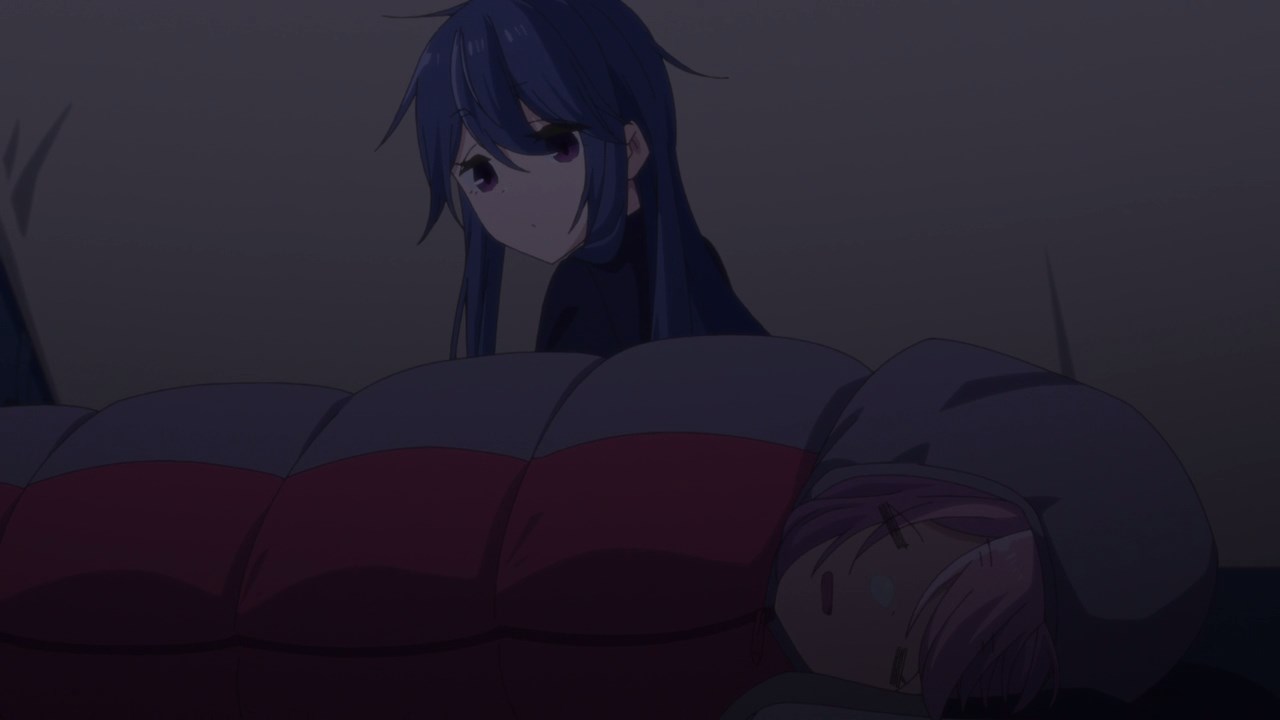 On the other hand, it appears that Shimarin got up at around 4 AM. Looks like she became an early bird on this camping trip. 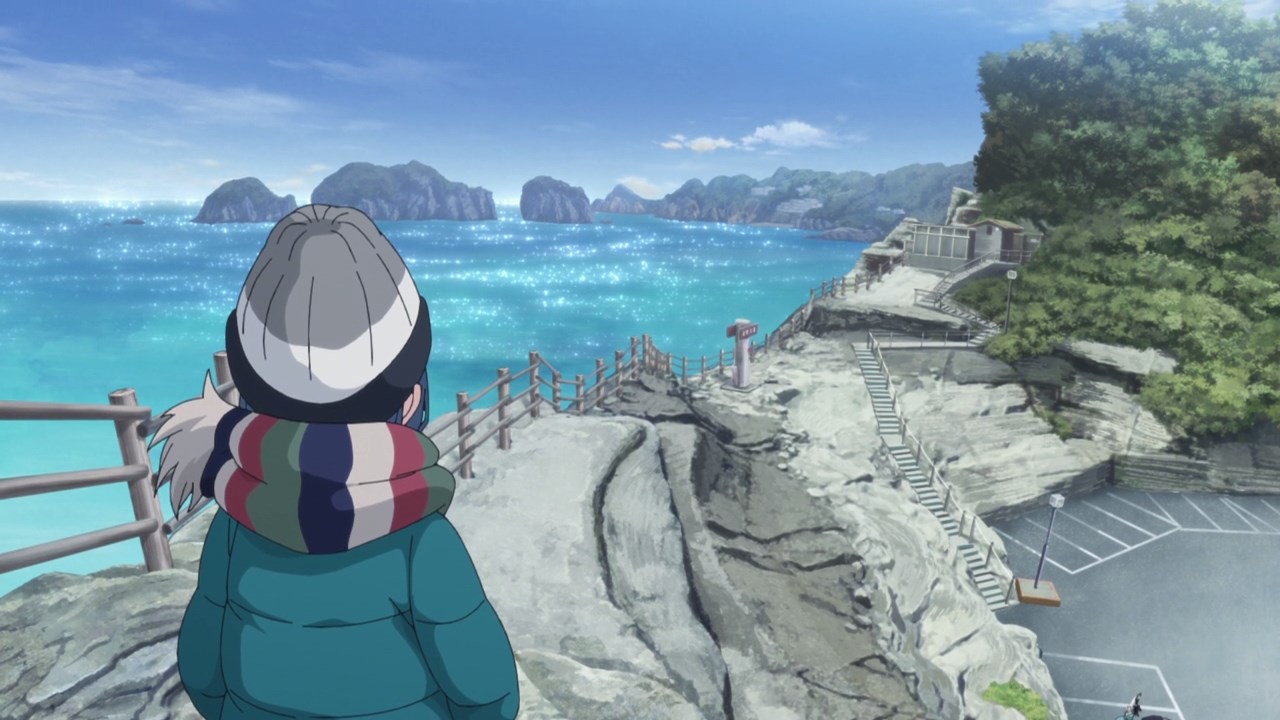 But that gives Rin-chan an opportunity to explore various places such as Sawada Park by herself. Then again, Chiaki Oogaki is worried that she went missing.

With that said, let’s end this episode where Shimarin went to a hot spring which is located at the cliff. Unlike earlier where she’s pretty much groggy due to travel, Rin-chan felt very relaxed.

Of course, there’s more to come on the next episode because Shimarin and her friends will throw a surprise party for Nadeshiko and Aoi-chan.