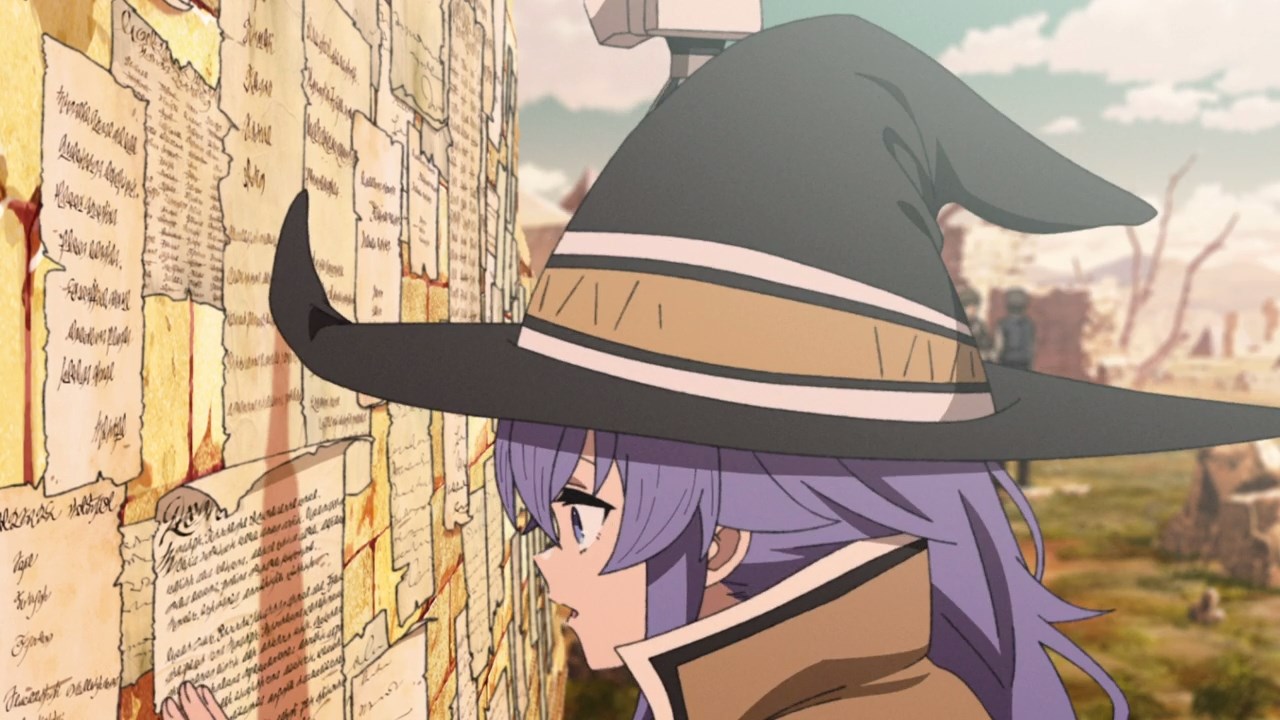 Let’s start this final episode with Roxy Migurdia as she returned to Fittoa, only to find out that the city is ruined due to the mana explosion and everyone went missing or confirmed dead.

Speaking of Roxy, she found a note from Paul Greyrat, saying that he went to the Millis Continent in order to find Rudeus and Eris. Heck, he even go as far as begging for help on finding his son and niece. For a man who did some scummiest things in his life, Paul really cared about his family. 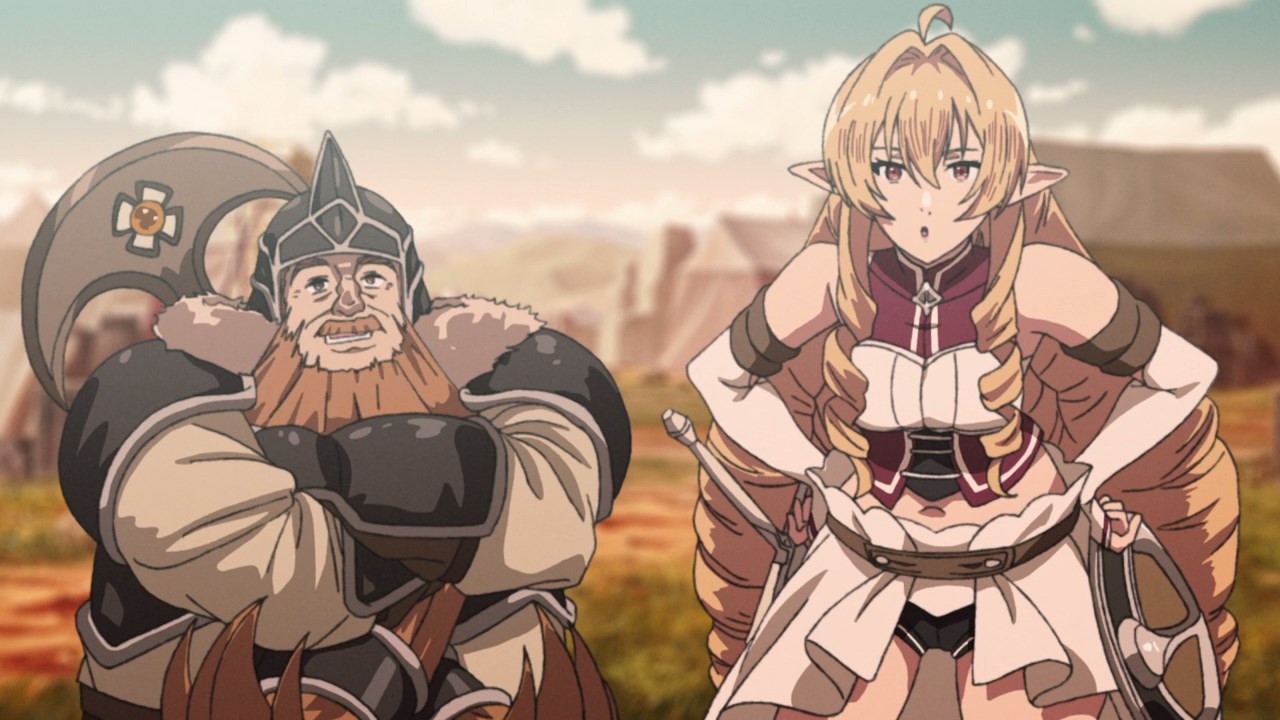 Meanwhile, it appears that Roxy Migurdia met both Talhand and Elinalise Dragonroad, members of the now-disbanded party called the Fang of the Black Wolf as they’re curious on what happened to their leader Paul upon looking at his letter.

Man, I have a feeling that both adventurers will join Roxy on searching for Rudy and Eris. 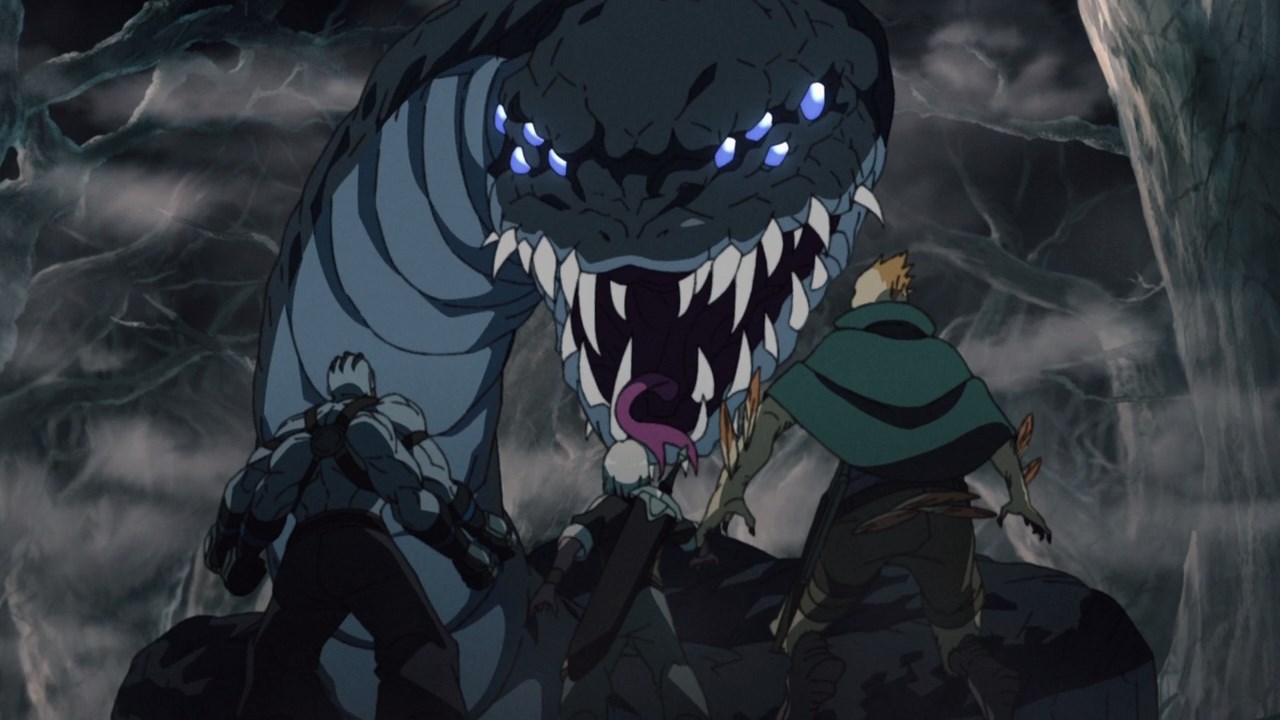 But let’s go back to Rudeus Greyrat where he’s still stuck at the demon continent together with Eris Boreas Greyrat as they’re trying to complete various quests and earn money.

Unfortunately, Rudy and his friends will have to save Kurt’s party from this giant almond anaconda, but Rudy decided to hold off the rescue until Kurt and his friends are in a desperate situation. 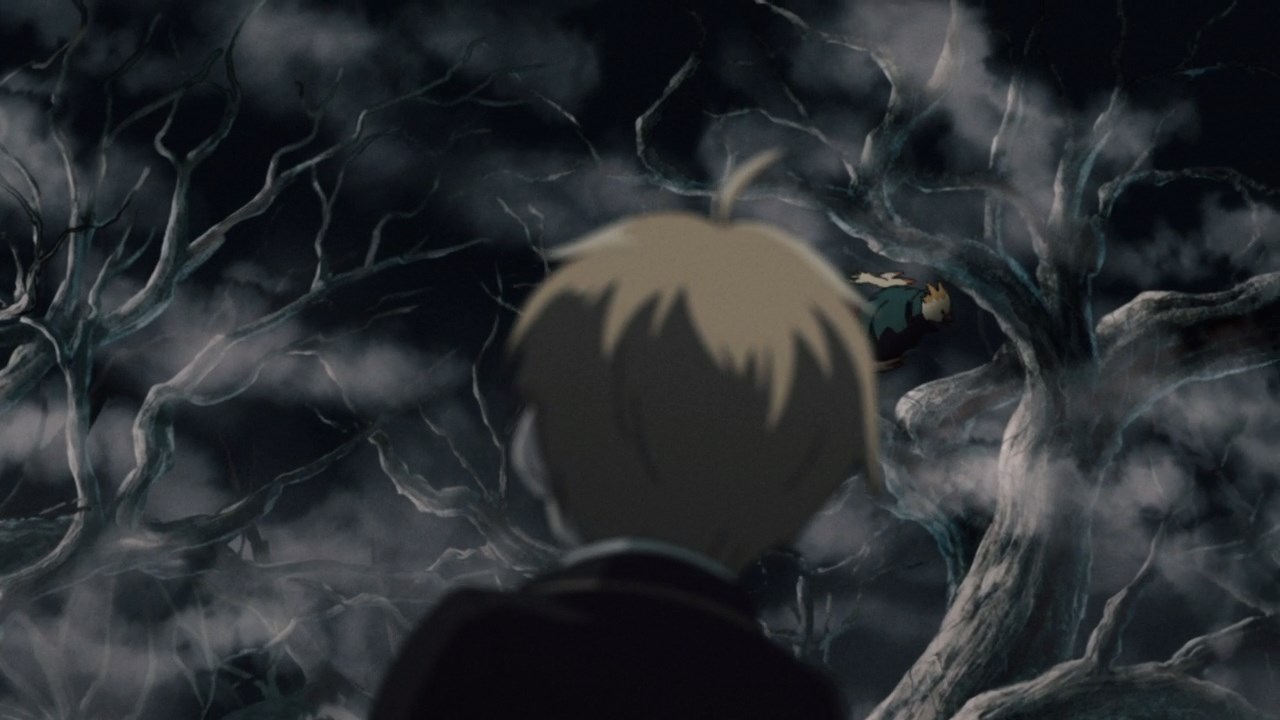 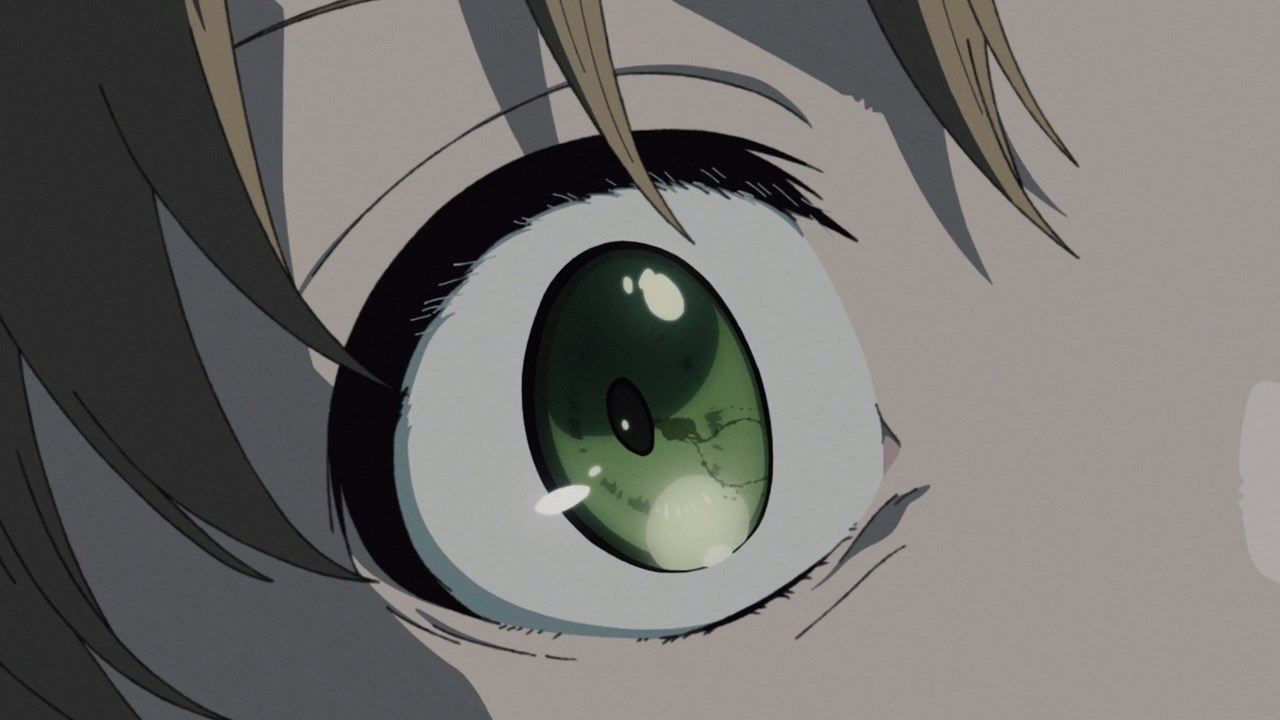 Then again, it appears that his plan didn’t work out as one of Kurt’s friends got cut in half. I guess Rudy should have acted quickly instead of waiting for the opportunity to make a grand entrance. 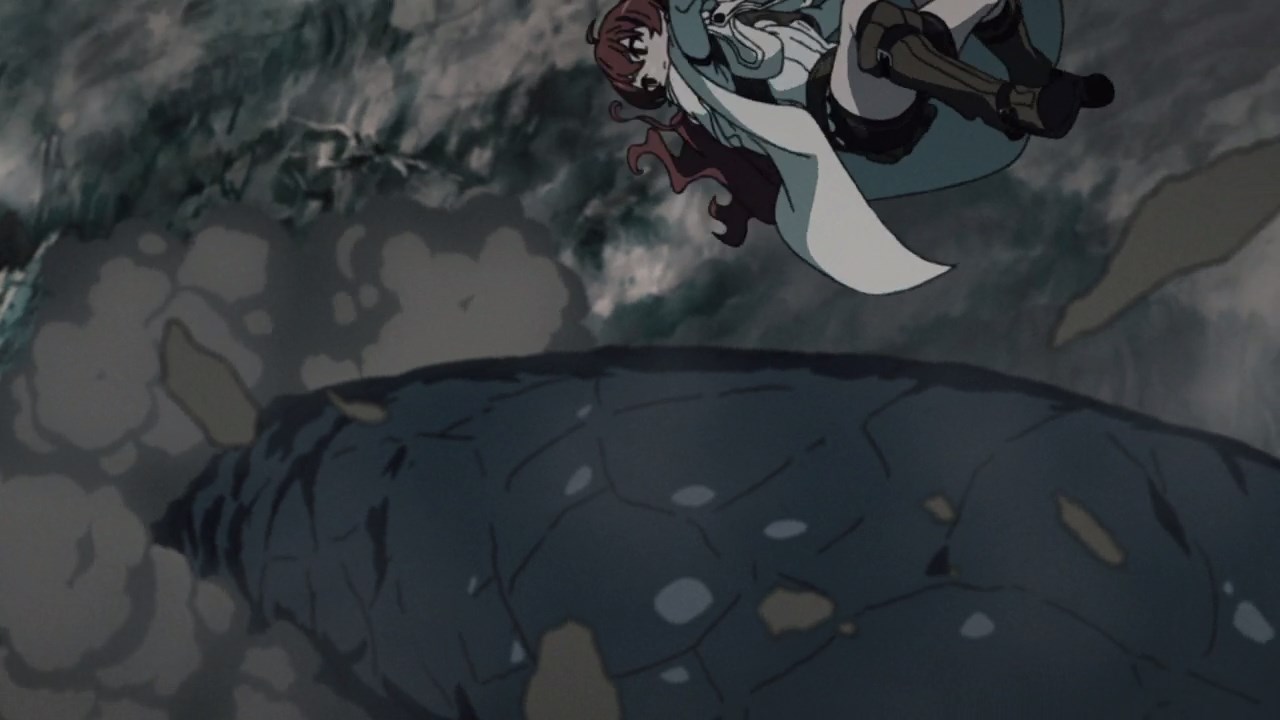 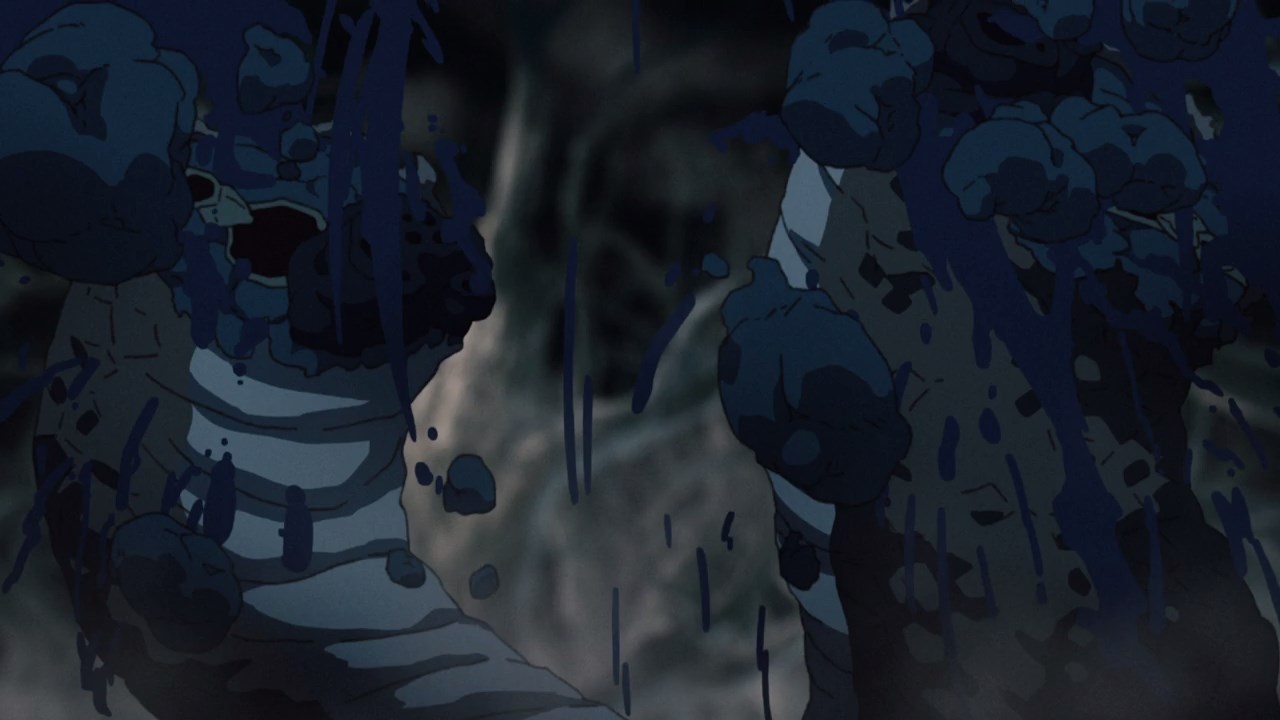 Well then, it’s time for Eris Boreas Greyrat to slay the almond anaconda by herself as she jumps and cut the snake into two. You may thank Ghislaine Dedoldia for teaching Eris on swordsmanship. 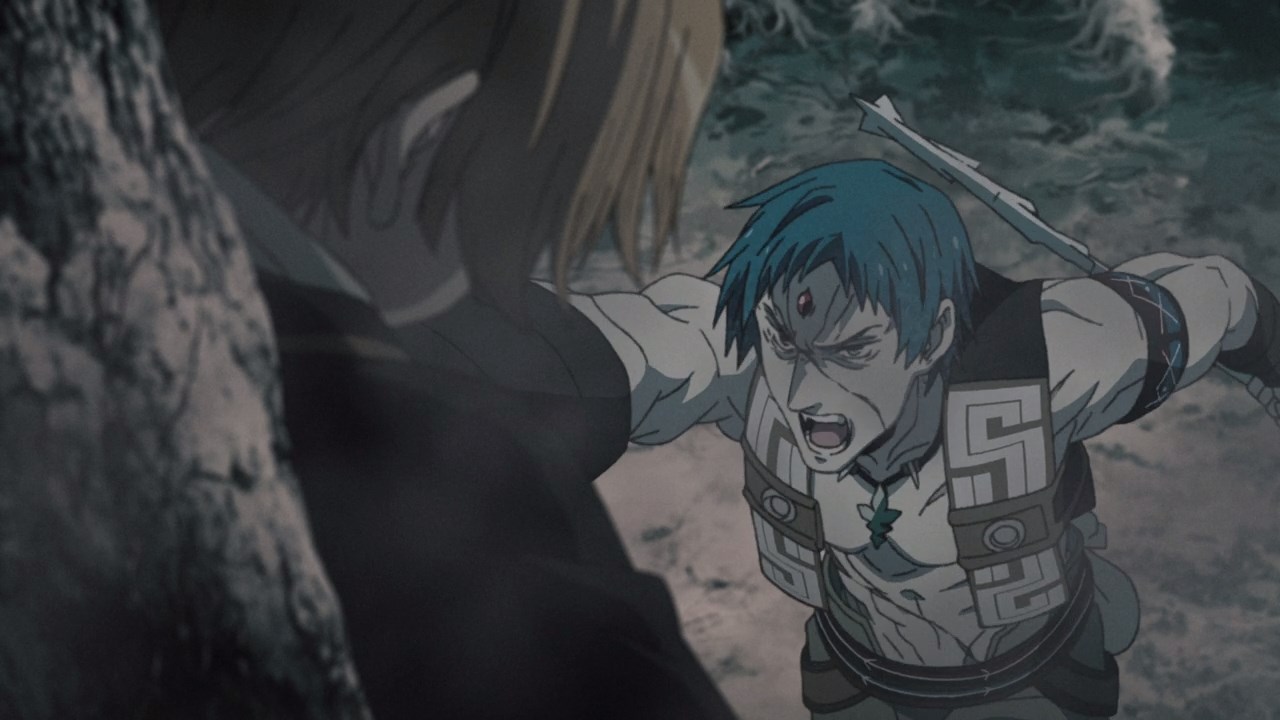 Unfortunately, it appears that Ruijerd Superdia is not happy that Rudy told everyone to stay put, which lead to one of Kurt’s allies being killed by a giant anaconda. 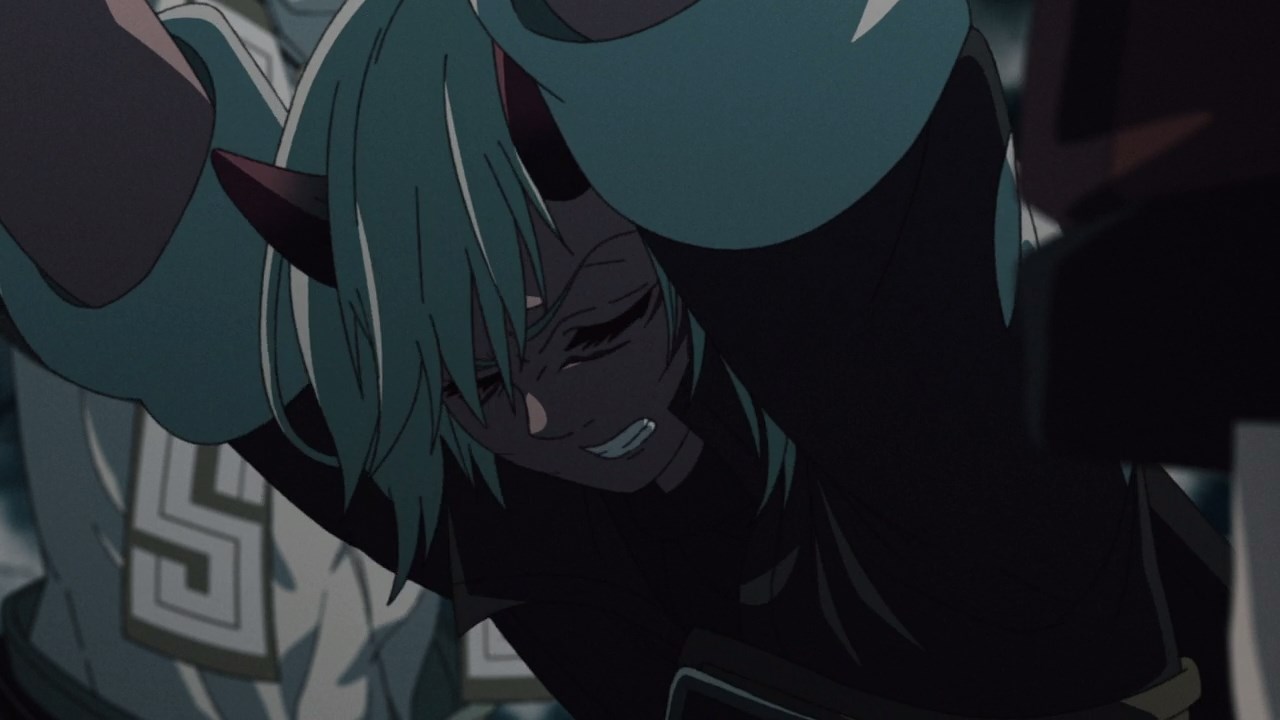 However, Kurt told Ruijerd that it’s his fault for letting his comrade die. C’mon, Kurt and his friends know the risk on fighting powerful monsters. 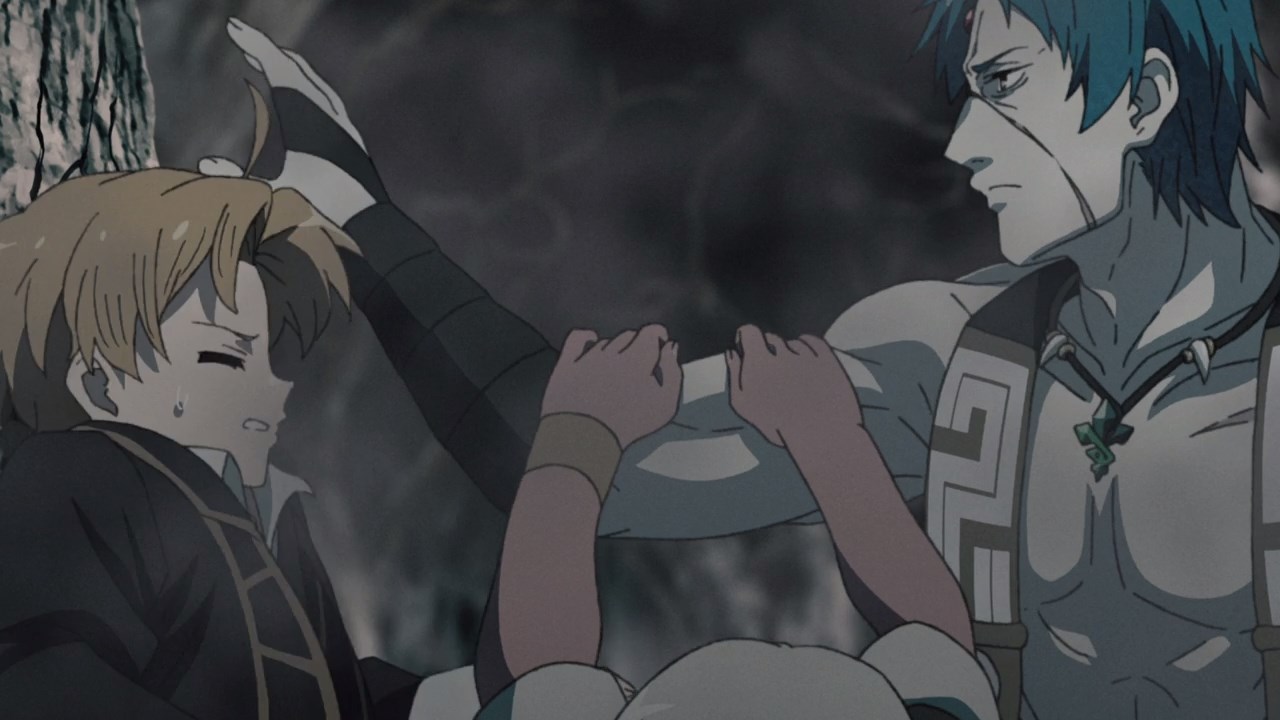 But yes, it appears that Ruijerd believe on Kurt’s words and decided not to punish Rudeus for his inaction. But still, Rudy shouldn’t hesitate on saving someone who’s about to get killed. 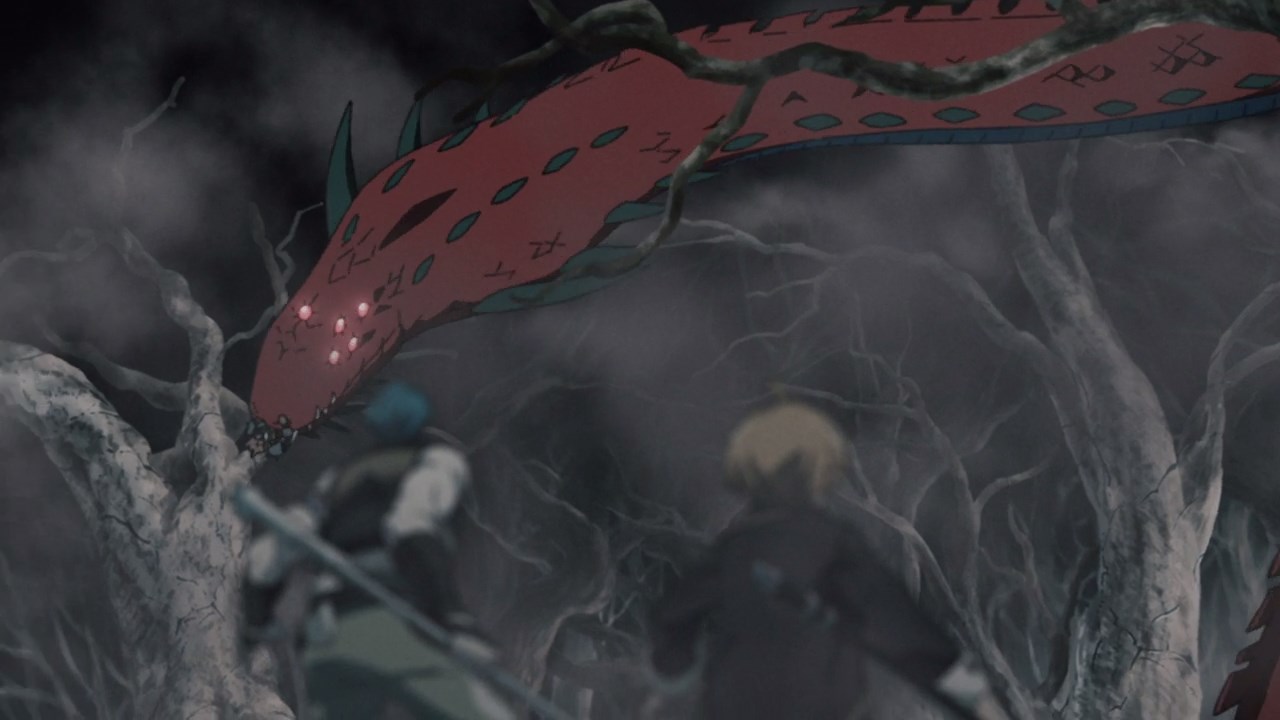 Now let’s move onto fighting more monsters where Rudy and his friends encountered a redhood cobra.

Sadly, the hunting party already got wiped out so it’s up to Dead End on finishing the deed. After all, Rudy’s party is stronger than you think. 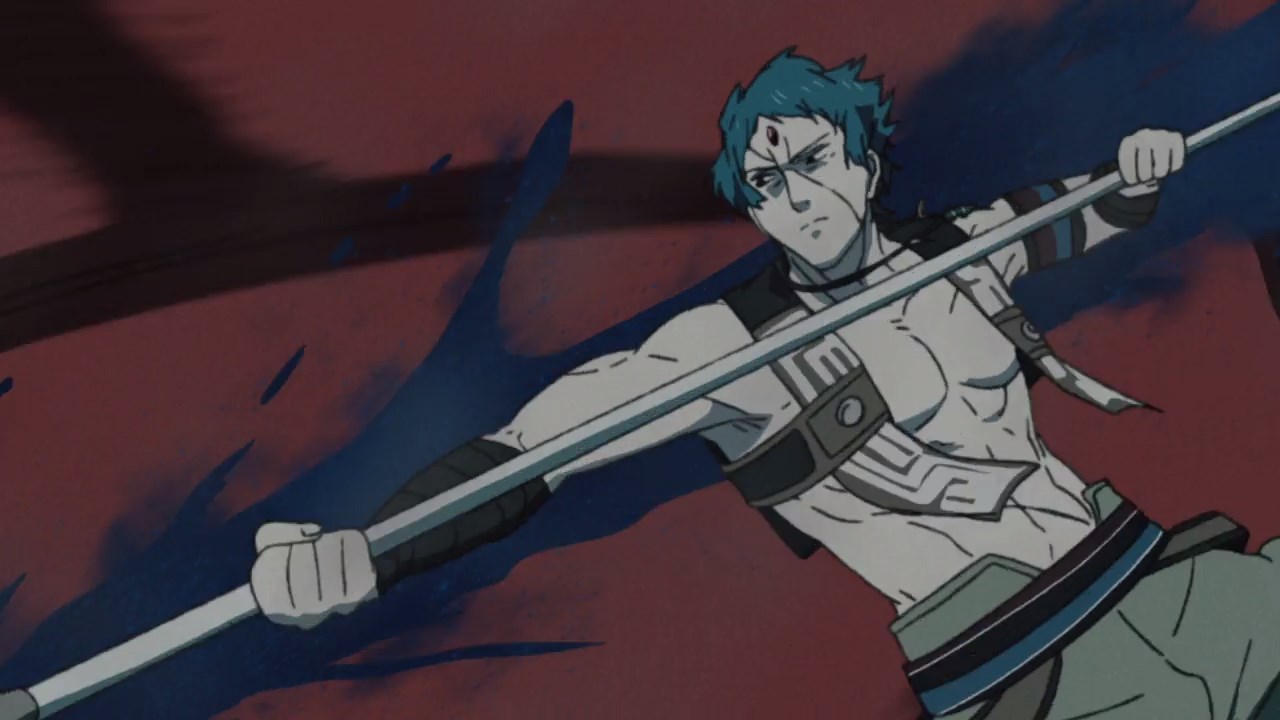 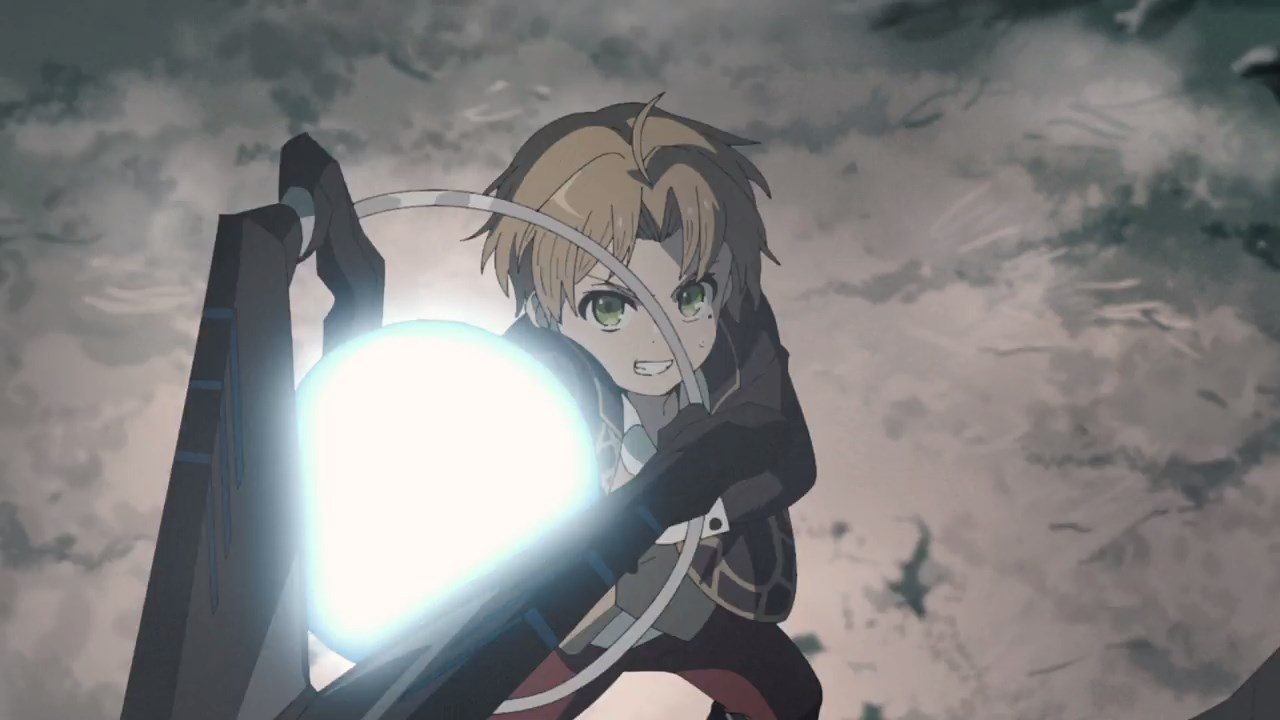 With that said, time for Ruijerd Superdia and Rudeus Greyrat to show their stuff as they’re gonna kill the redhood cobra as quickly as possible. 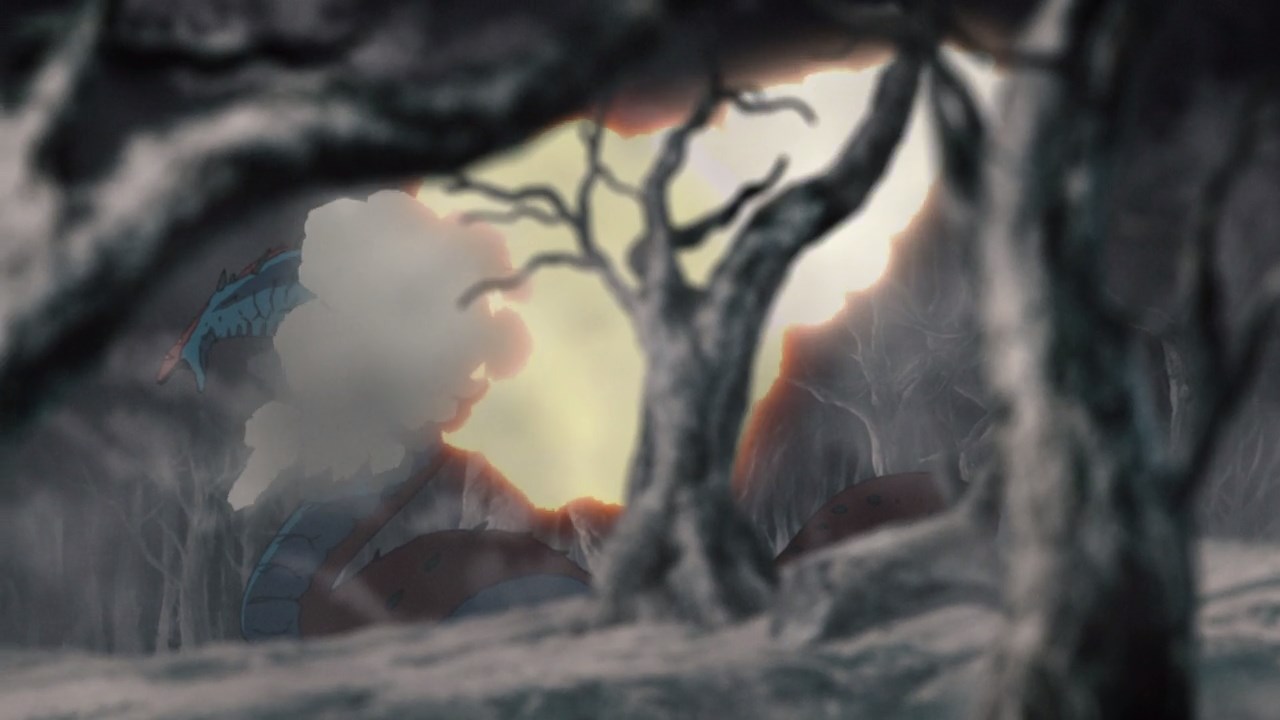 But yes, they managed to kill the redhood cobra thanks to the combined power of Dead End. Of course, what comes next is gonna infuriate people. 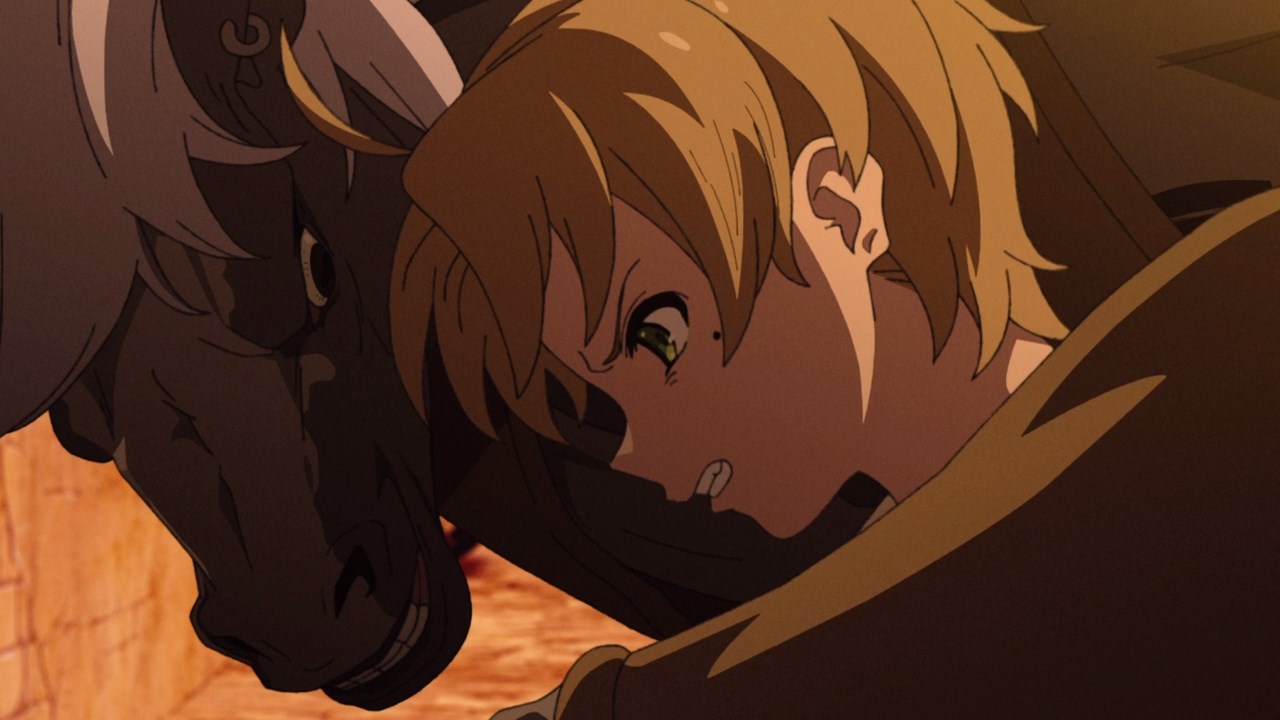 You see, this C Rank adventurer named Nokopara wants Rudeus to pay him. Otherwise, he’s gonna tell the guild association that they use D Rank adventurers to change jobs, meaning that their license will be revoked. 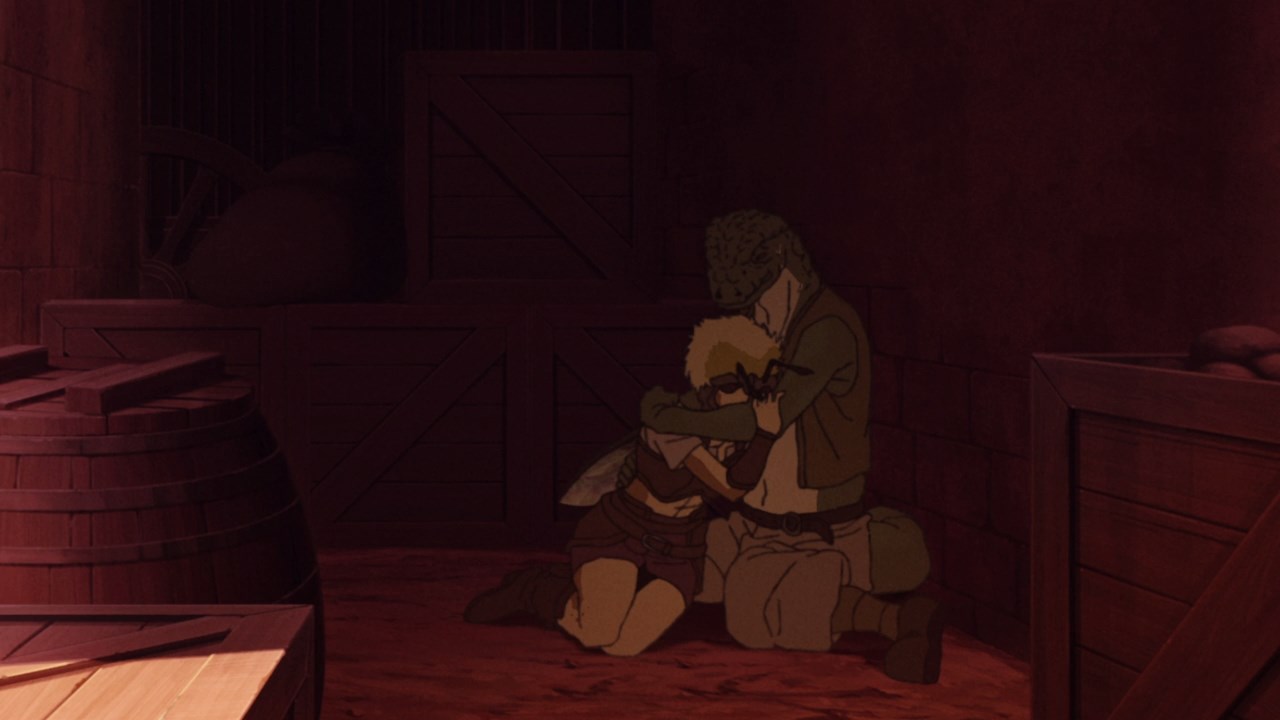 And speaking of D Rank adventurers, here’s both Jalil and Vizquel where they manage to screw up the act which got the attention of Nokopara. Okay, that’s goddamn bullying right there and Rudy doesn’t like it. 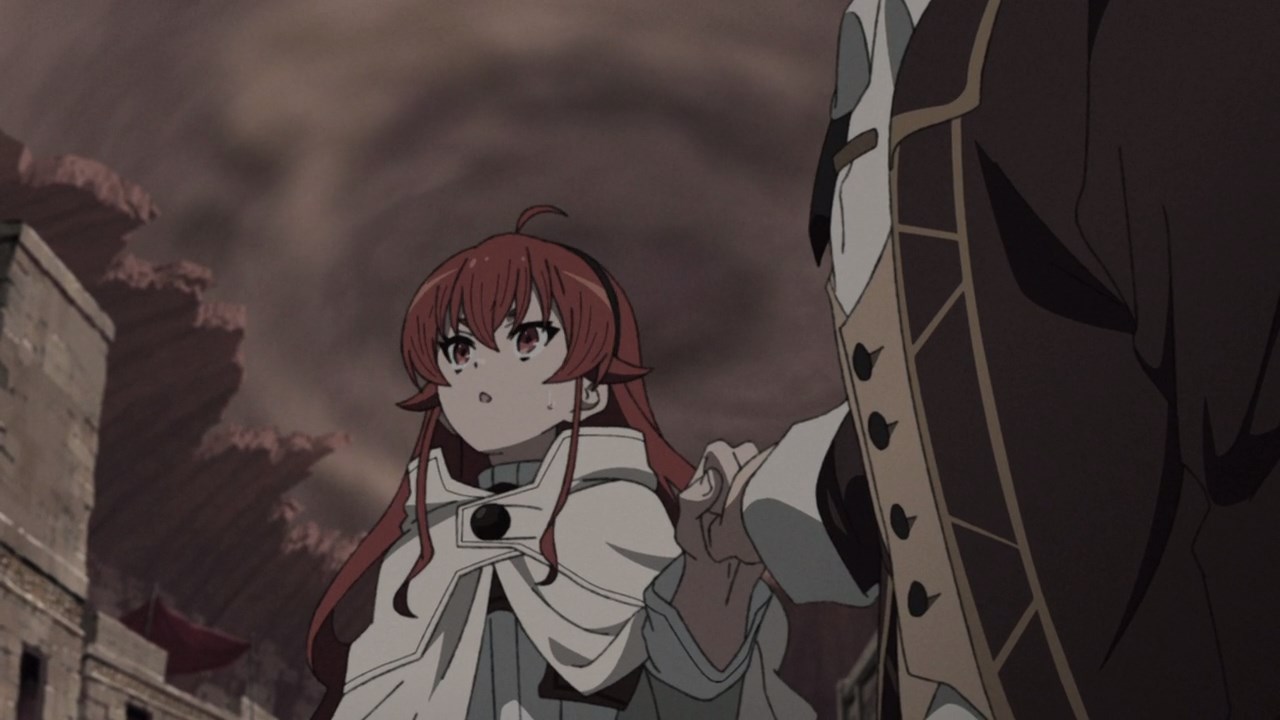 So, he decides to cast a powerful storm on this city just to scare Nokopara, although Rudeus might get overboard where he might destroy the city. Heck, even Eris felt the trembling anger upon touching Rudy’s hand. 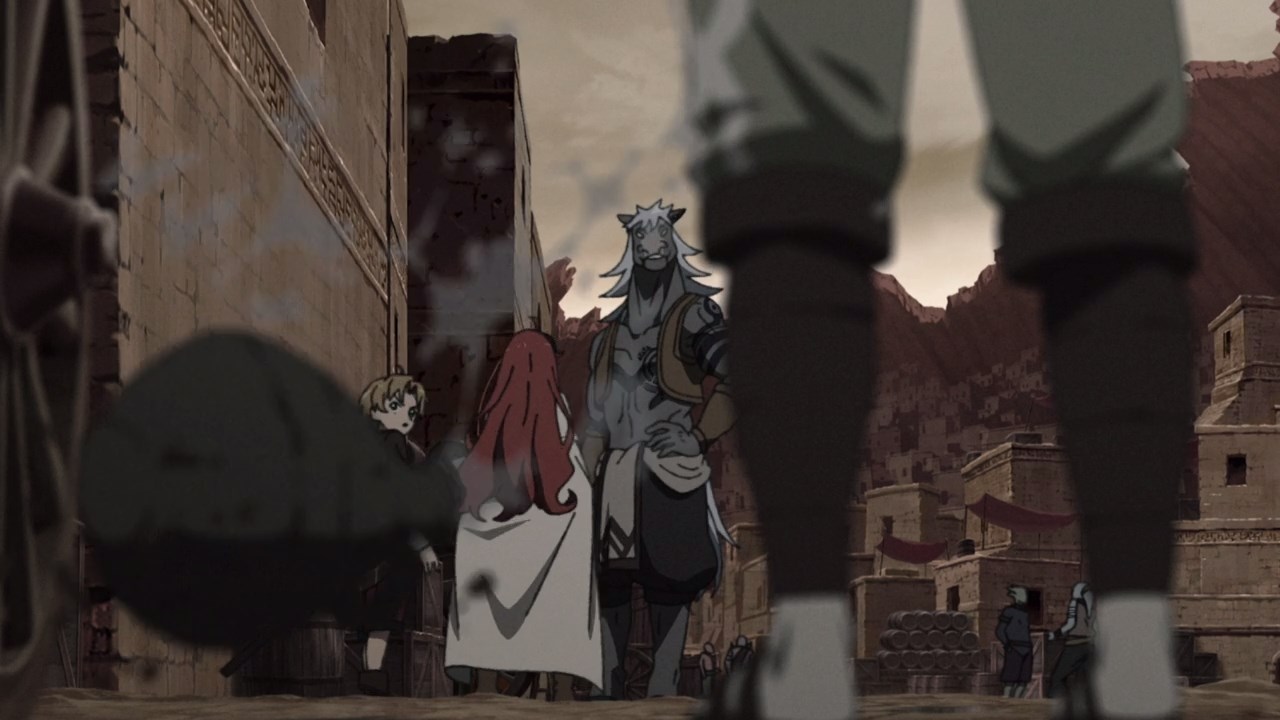 However, it appears that someone is gonna tell the horseman to shut up instead of Rudeus. Oh and about that water bottle that was dropped just now? Looks like a certain person decided to show his true nature. 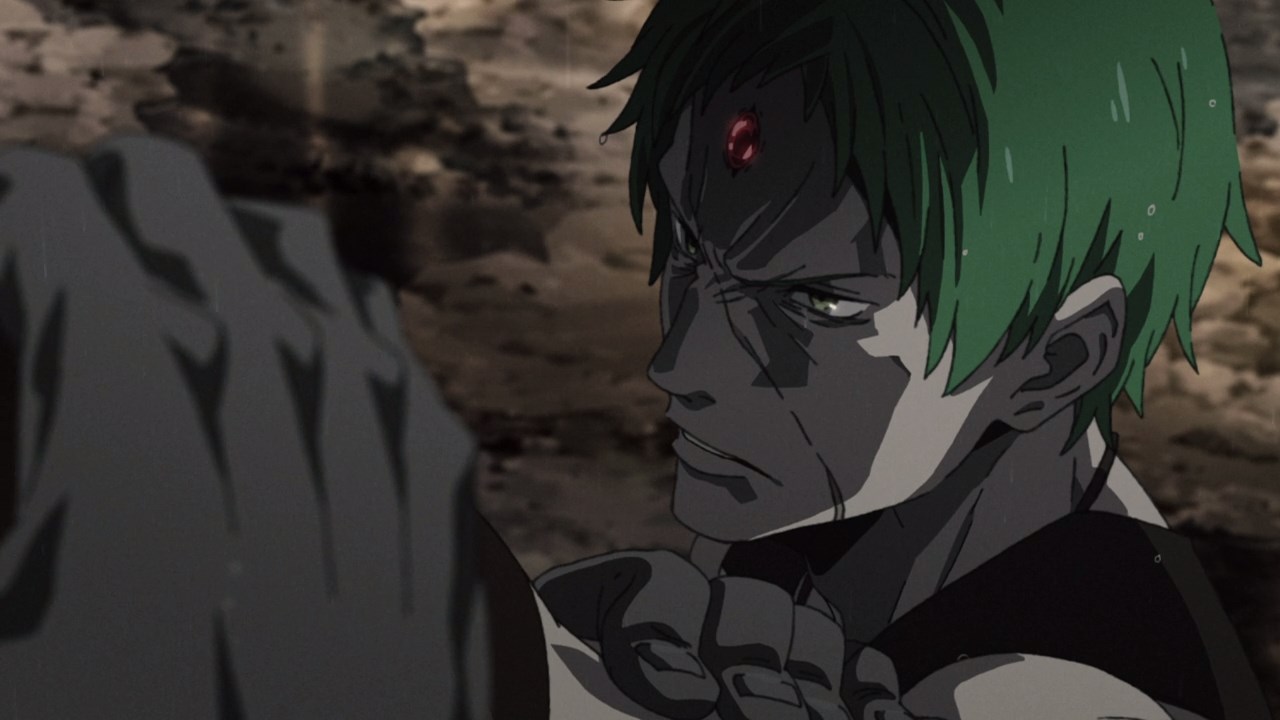 That’s right, it’s Ruijerd Superdia where he doesn’t like Rudy being pushed around. Oh yeah, notice that he poured water on his head just to wash off the blue dye from his hair. 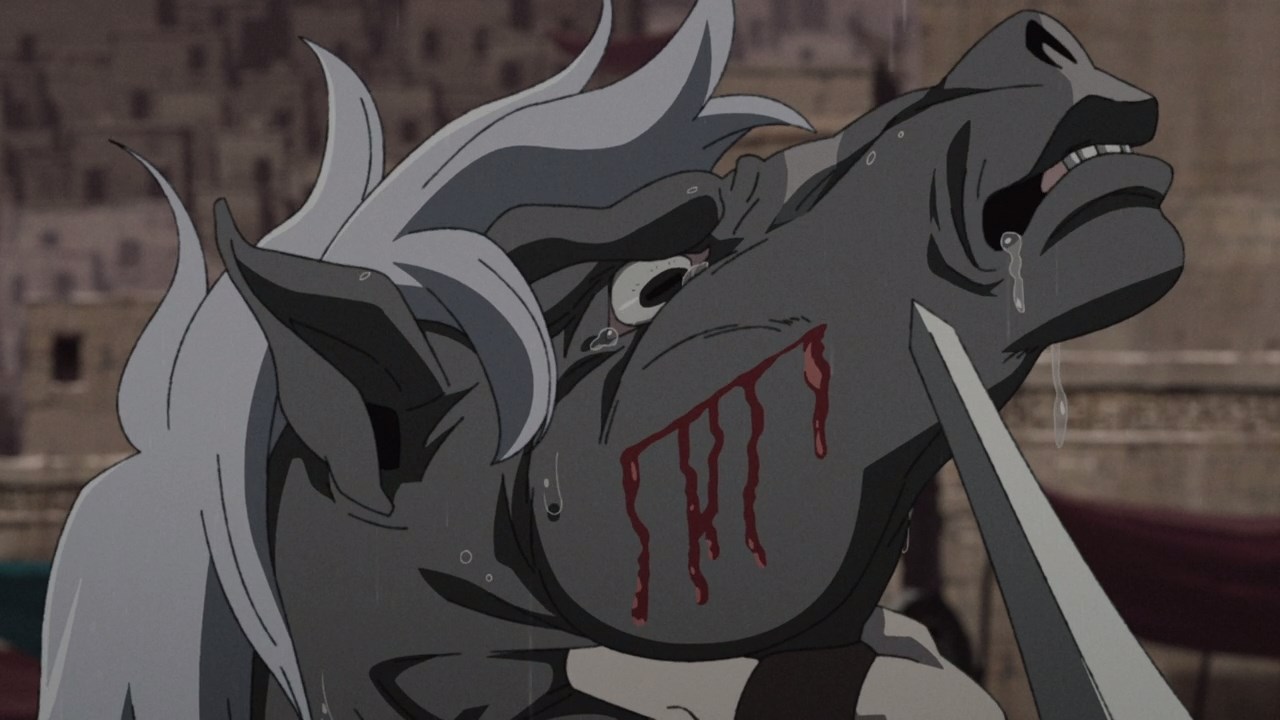 As for Nokopara, looks like he’s begging for mercy towards Ruijerd where he has a family to return to. What a shocker, considering that he bullies low-ranked adventurers! 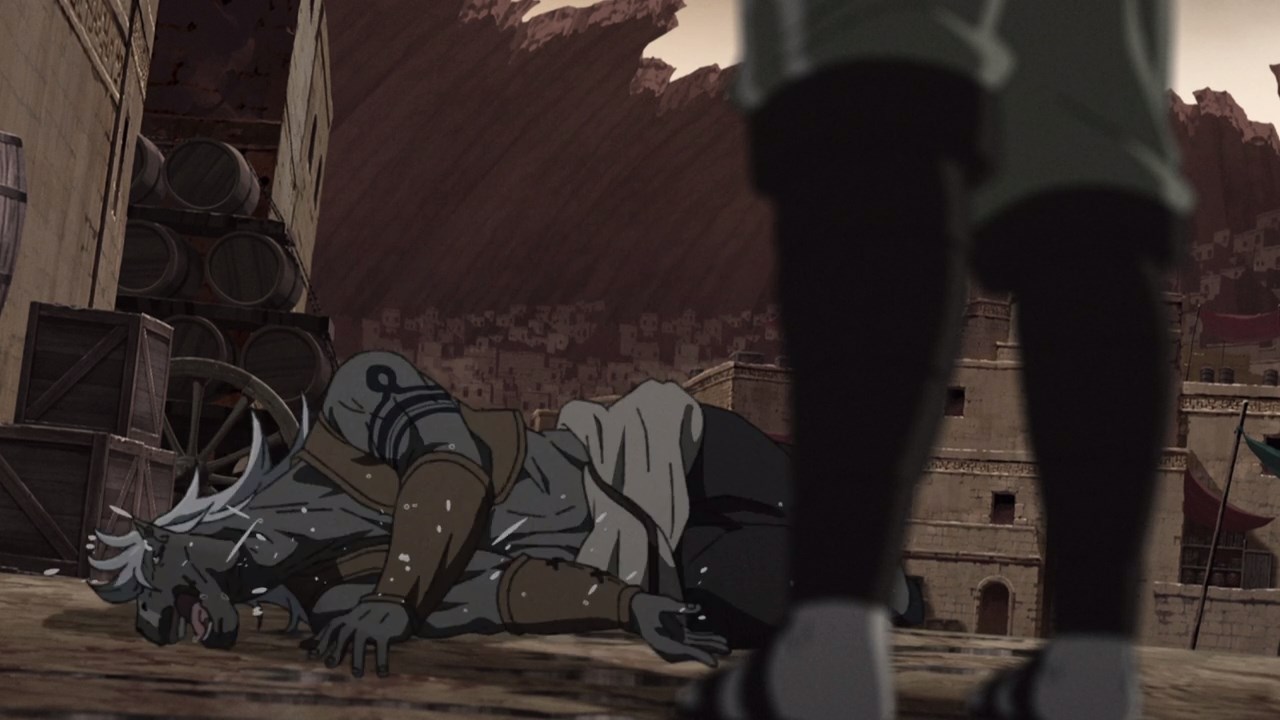 Well, that scared the shit out of Nokopara that this horseman just passed out upon encountering a Superd. Then again, it appears that Rudy and his allies will have to move to another town since Ruijerd Superdia revealed his true origin to everyone. 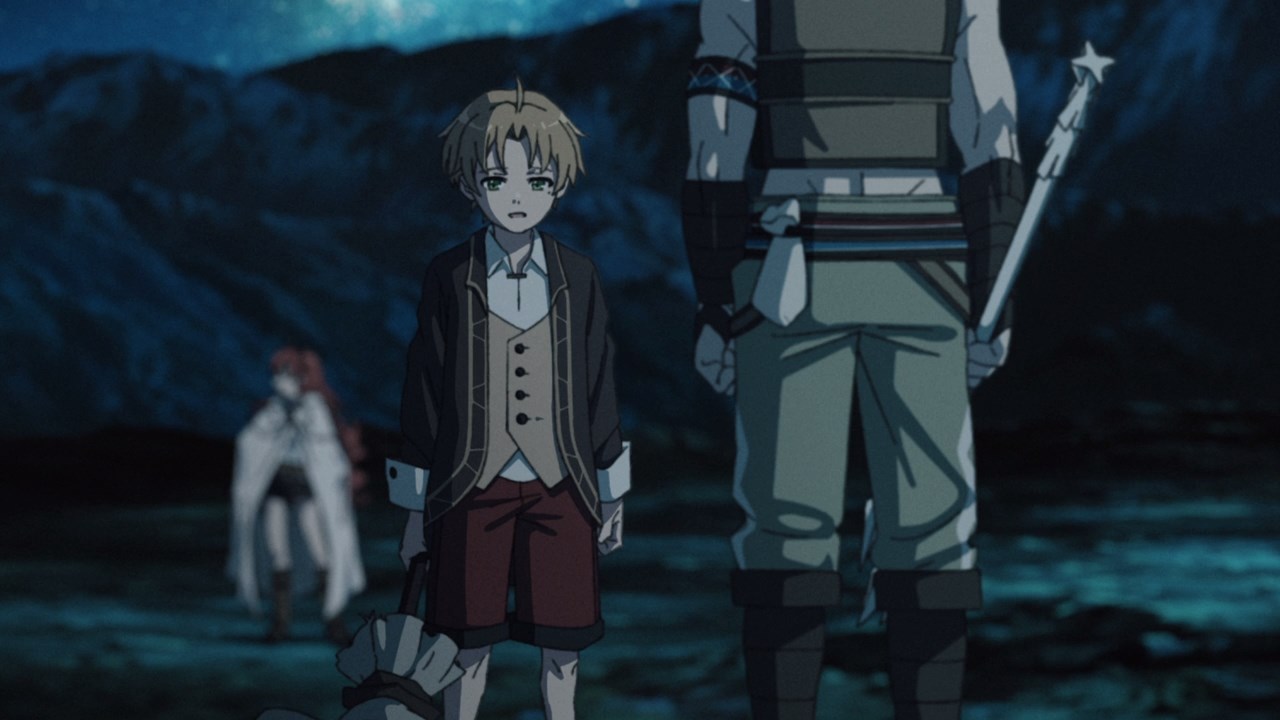 Still, Rudy wants to apologize to Ruijerd for everything he screw up for, from letting one of the adventurers die to getting into trouble against nasty people like Nokopara. 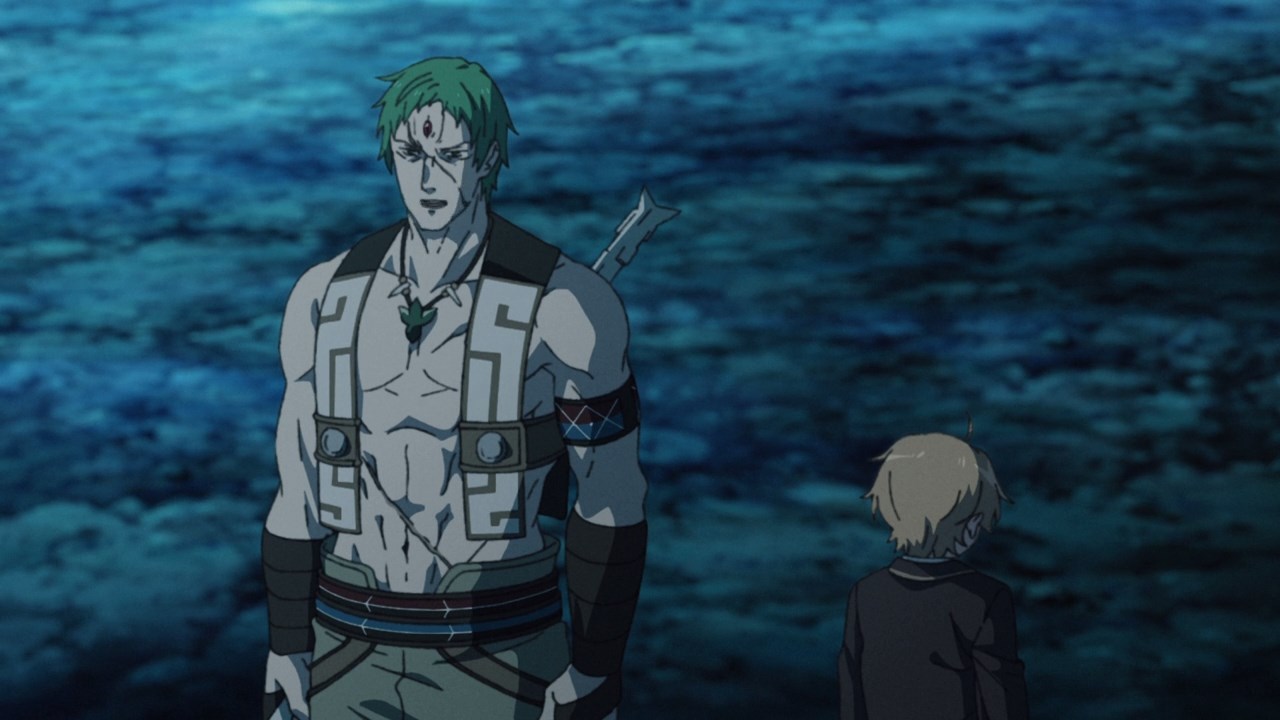 However, Ruijerd told Rudy that he saw his resolve to protect his friends from danger. Hence, he considers Rudeus as a warrior.

Well, that’s nice from Ruijerd but man, let’s hope that they can make ends meet so that Rudy and Eris can go home. 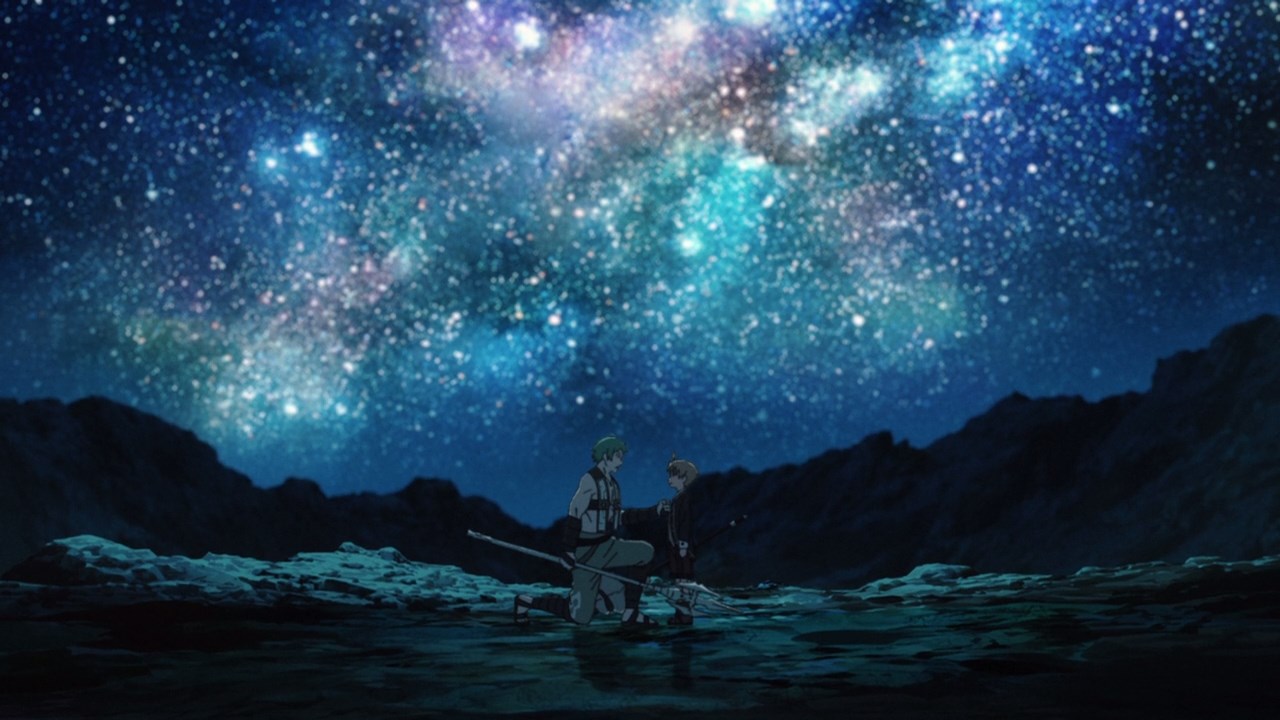 But anyways, looks like both Ruijerd Superdia and Rudeus Greyrat understand each other and I’m sure that they’re gonna pull every hardship together with Eris Boreas Greyrat. 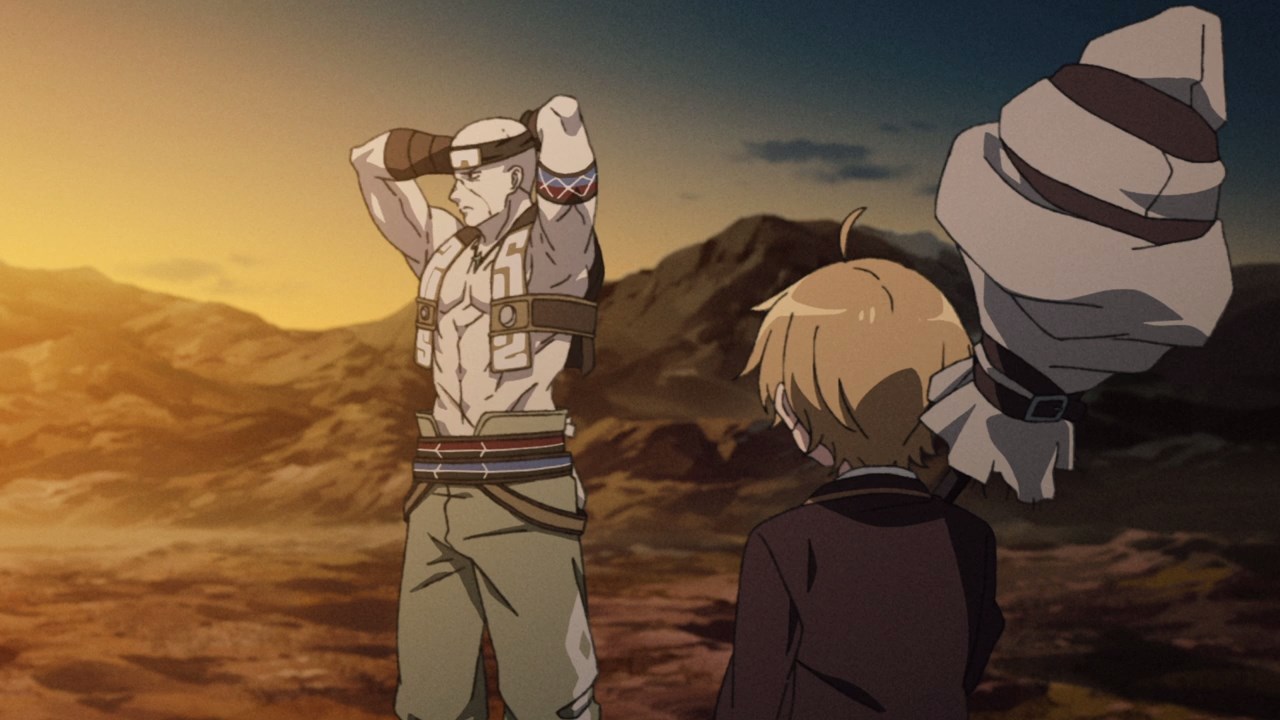 And speaking of Ruijerd, looks like he shaved his head and cover his jewel with a headband. I guess Ruijerd doesn’t want anyone know that he’s a Superd. 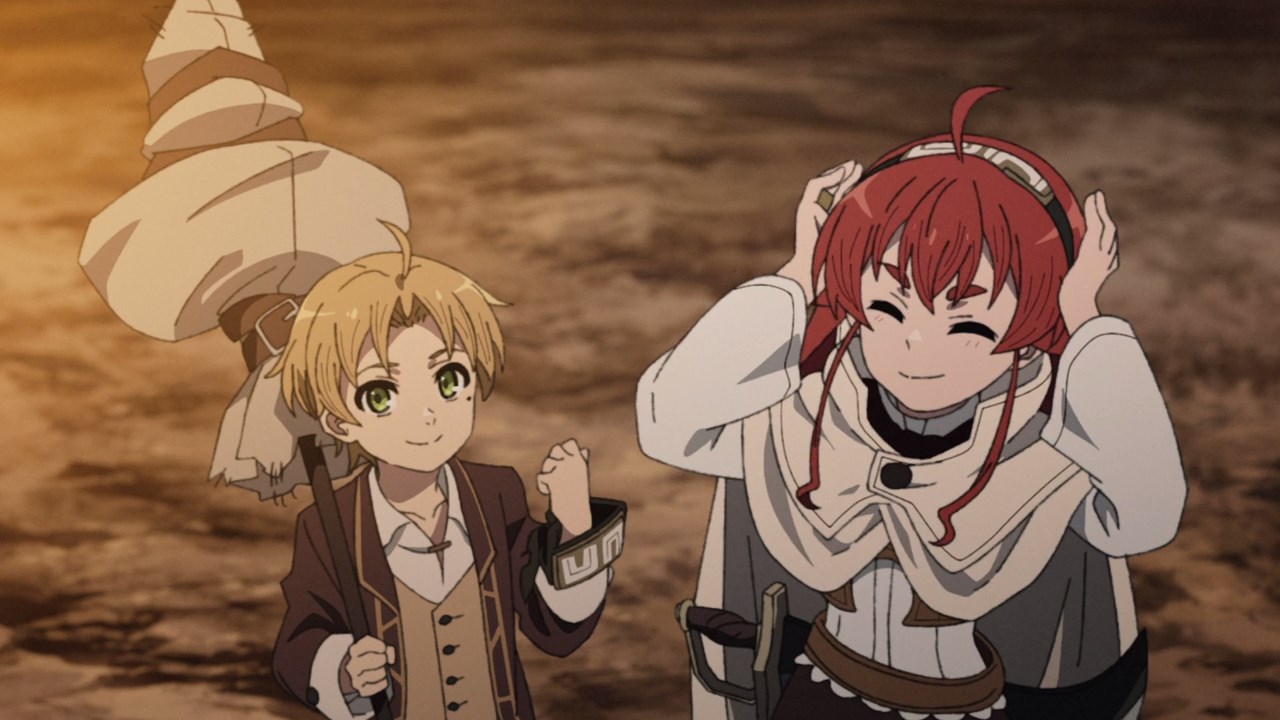 Oh yeah and about his headband? Rudeus bought it for Ruijerd as he and Eris got the same thing. Well it appears that they’re becoming a great team as they’ll head towards the Asura Kingdom.

But that’s about it for Mushoku Tensei and while the show is being called-out for Rudy being a dirty old man and such, I’m really hooked on how the main character tries to redeem himself from his previous life into the fantasy world. Oh yeah, and I’m impressed on breathtaking scenes from the anime in which a newcomer studio like Studio Bind have pulled all the stops on making it.

Of course, this show is not yet over because Mushoku Tensei will have another cour in the future. Then again, the only question is will the 2nd part of Mushoku Tensei arrive later this year or in January 2022. With that said, I’ll see Rudy and his friends again!