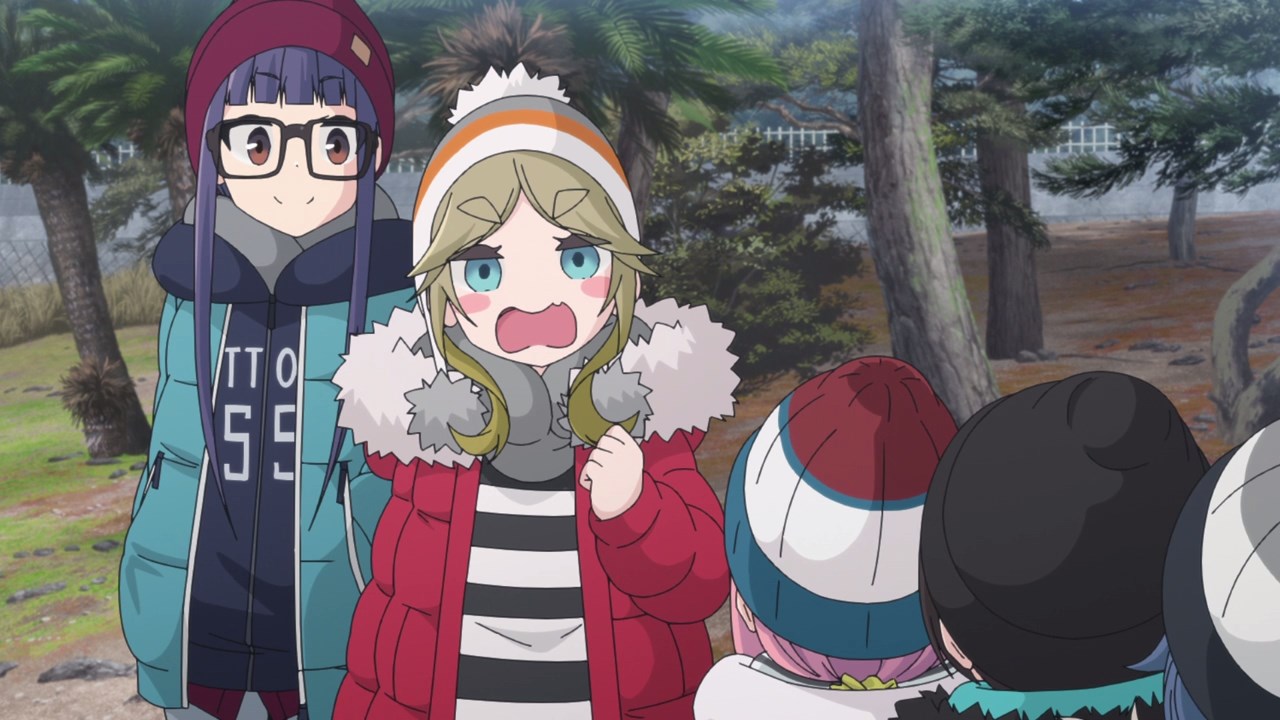 Let’s start this episode with Akari Inuyama where she wants to see the tombolo, which is a fish according to her. Okay, did Aoi-chan told some lies to her little sister? 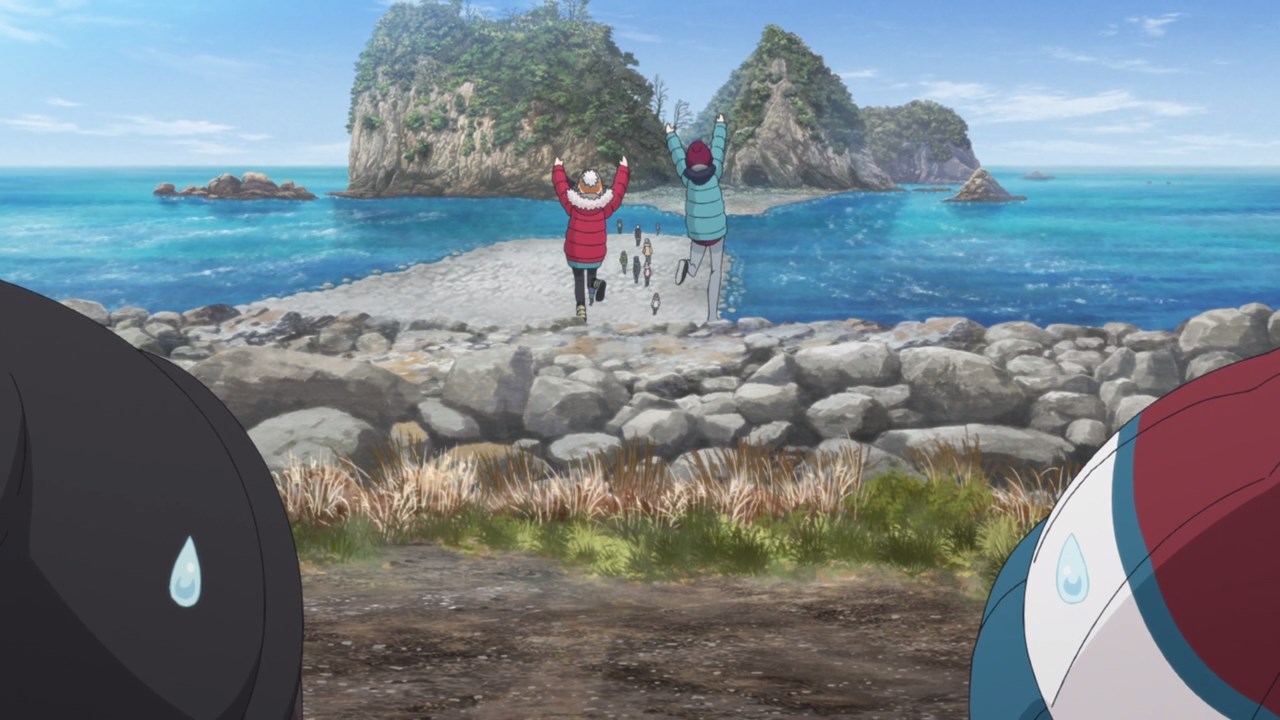 Well in actuality, tombolo refers to a narrow piece of land where it connects two islands. I mean, Akari is walking on it right now together with Chiaki Oogaki.

Of course, the only thing that bothers me is who will tell Akari the harsh truth? 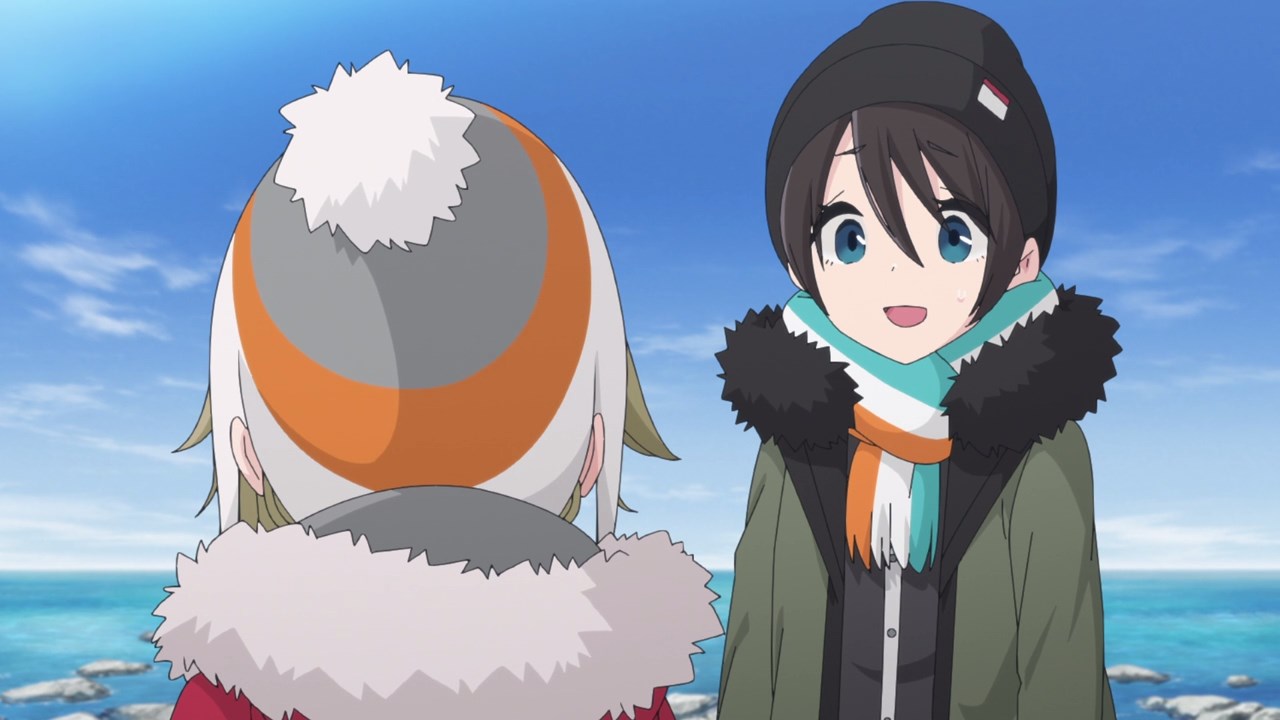 Turns out, it’s Ena Saitou where she straight-up told Akari that a tombolo is a landform, not a fish. Oh boy, looks like Ena-chan made Akari cry. 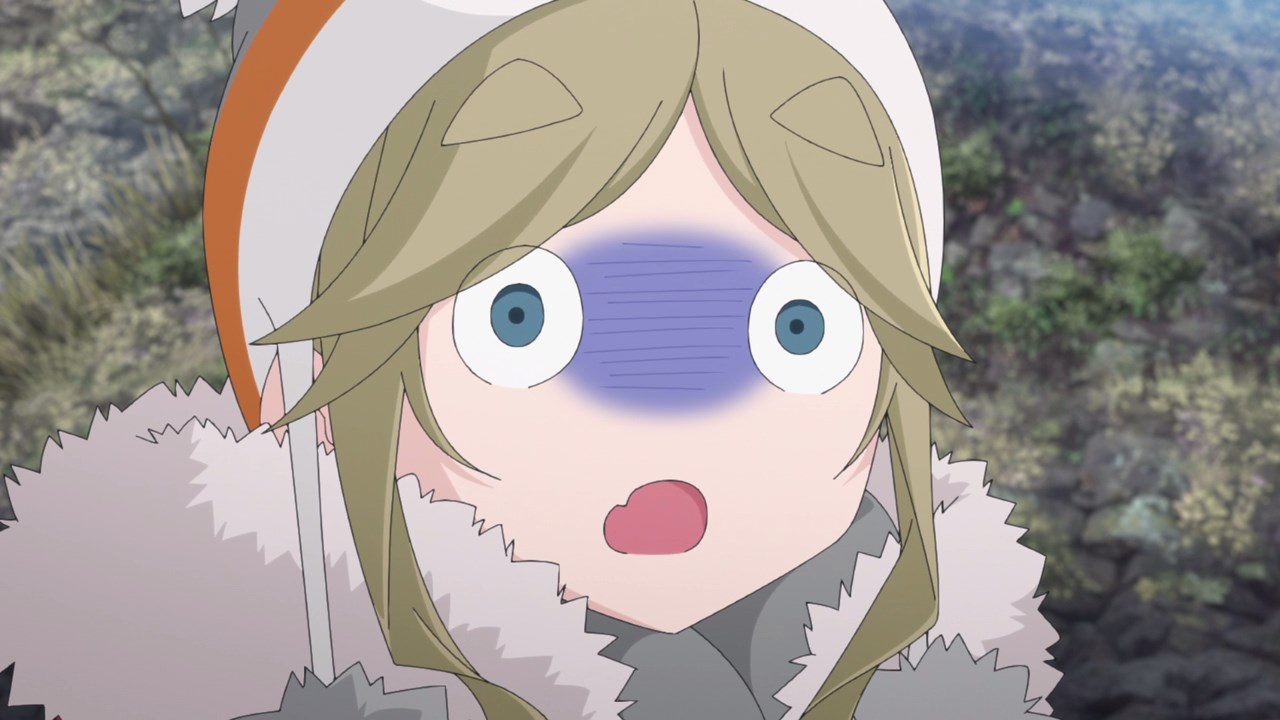 I mean look at her face? Akari felt disappointed that her sister Aoi lied to her about the tombolo. Looks like Aoi-chan owed an apology to her little sister. 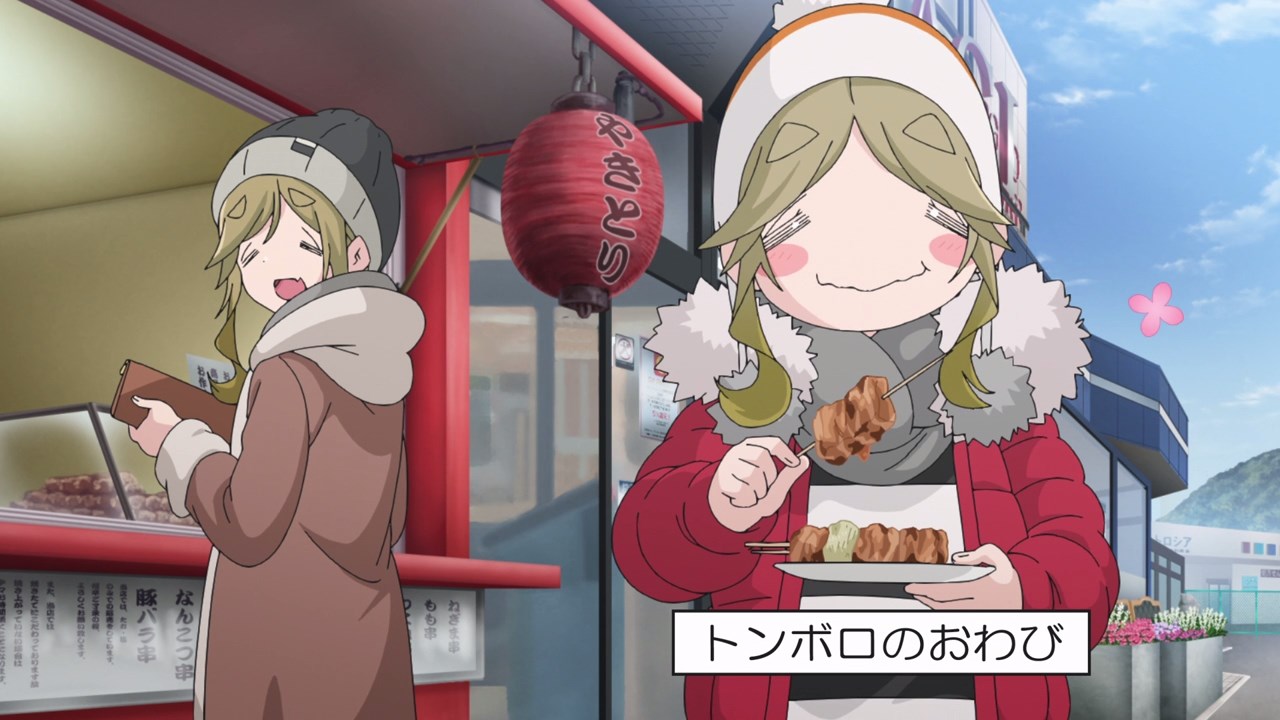 Fortunately, Aoi Inuyama bought some yakitori for Akari-chan as a way to apologize her little sister for lying about the tombolo. Seriously though, both of them are natural-born trolls. 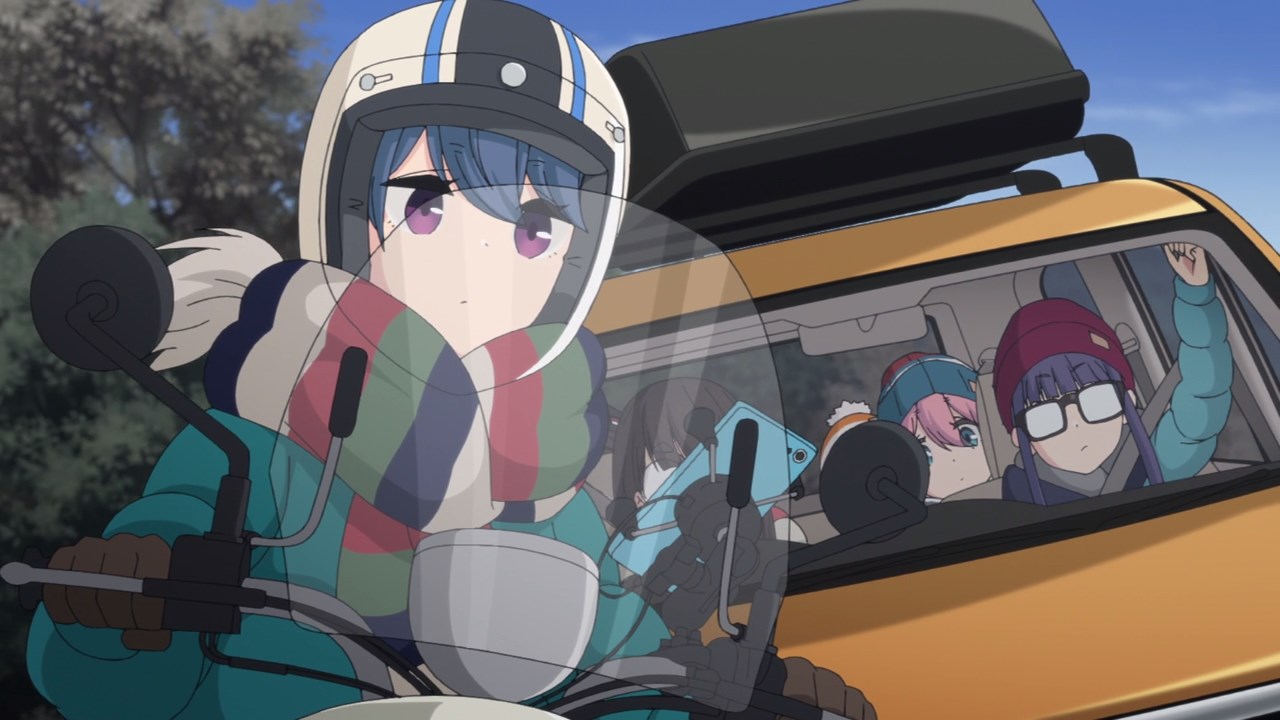 Now then, they’re heading towards Daruma-no-mori as they’ll stay at the campsite for a special occasion, although I can see them drifting at some twisty road.

Of course, Rin Shima and the rest won’t tell both Aoi Inuyama and Nadeshiko Kagamihara about their secret plan. 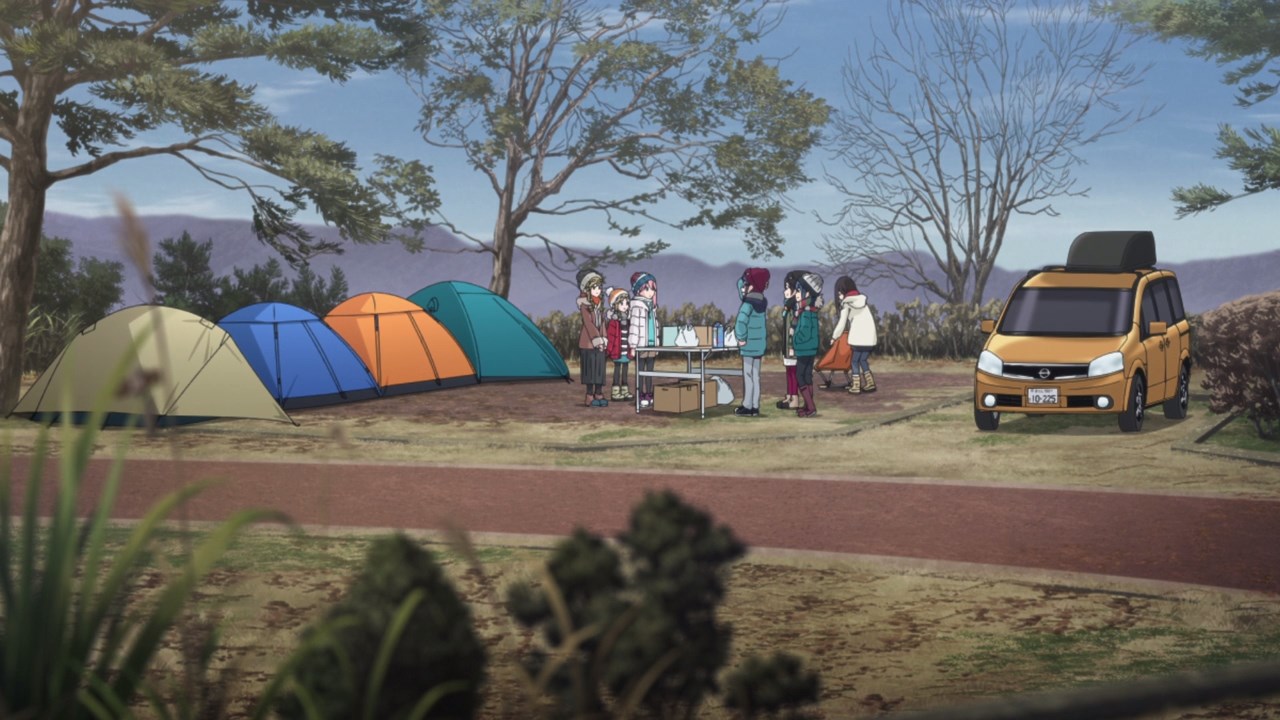 But they finally arrived at the campsite where the girls will prepare food for tonight. Then again, how will they keep Aoi-chan and Nadeshiko away while they cook food for the party? 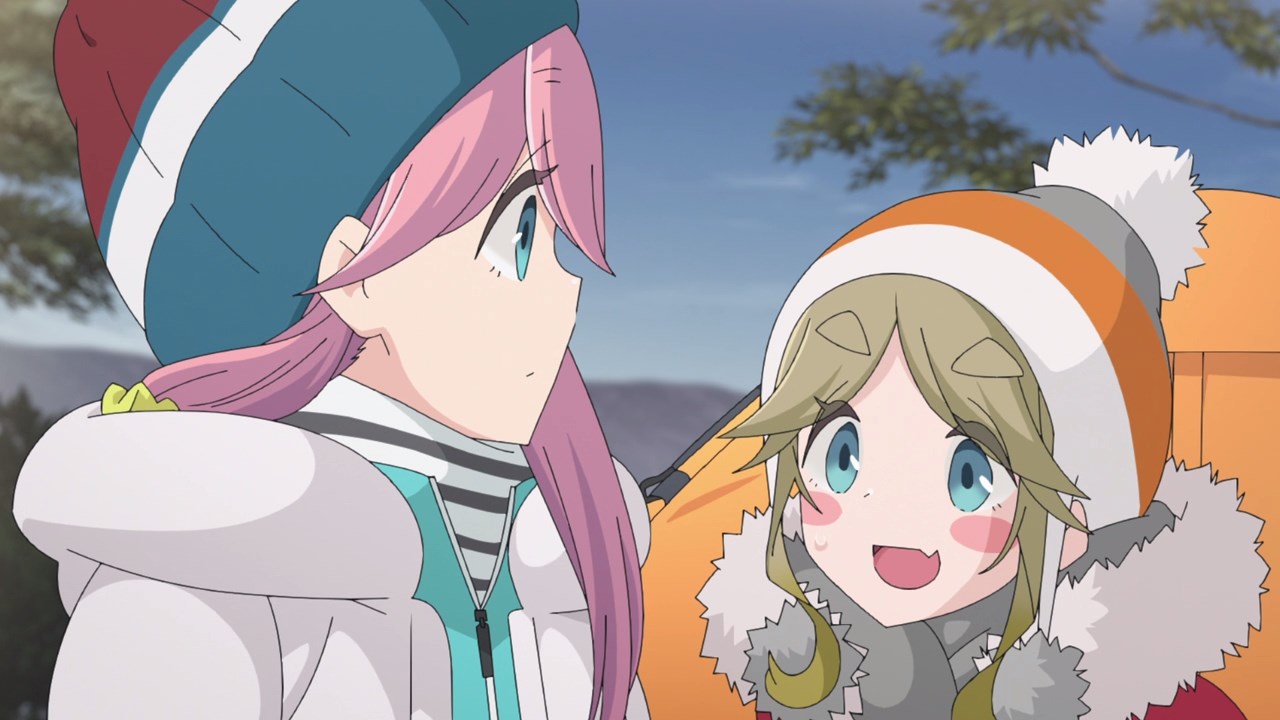 Well, there’s Akari-chan where she’s gonna take Nadeshiko and her older sister to Cape Mihama where it is said that they have nice baths there.

Not sure if Cape Mihama has a foot bath or a hot spring there, but it’s a good place for Aoi-chan and Nadeshiko to relax for the time being. 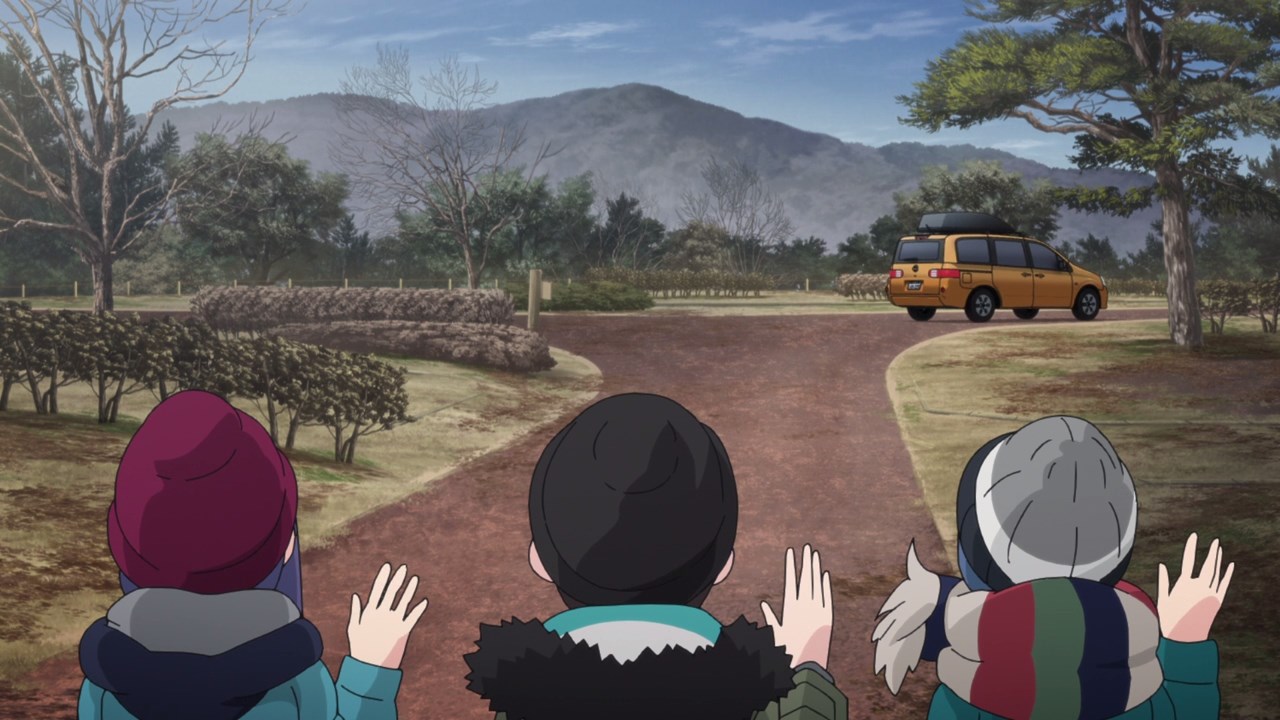 And since Cape Mihama is long, Minami Toba took both girls there via her car. Glad that Toba-sensei didn’t drink after arriving at Daruma-no-mori Campsite. 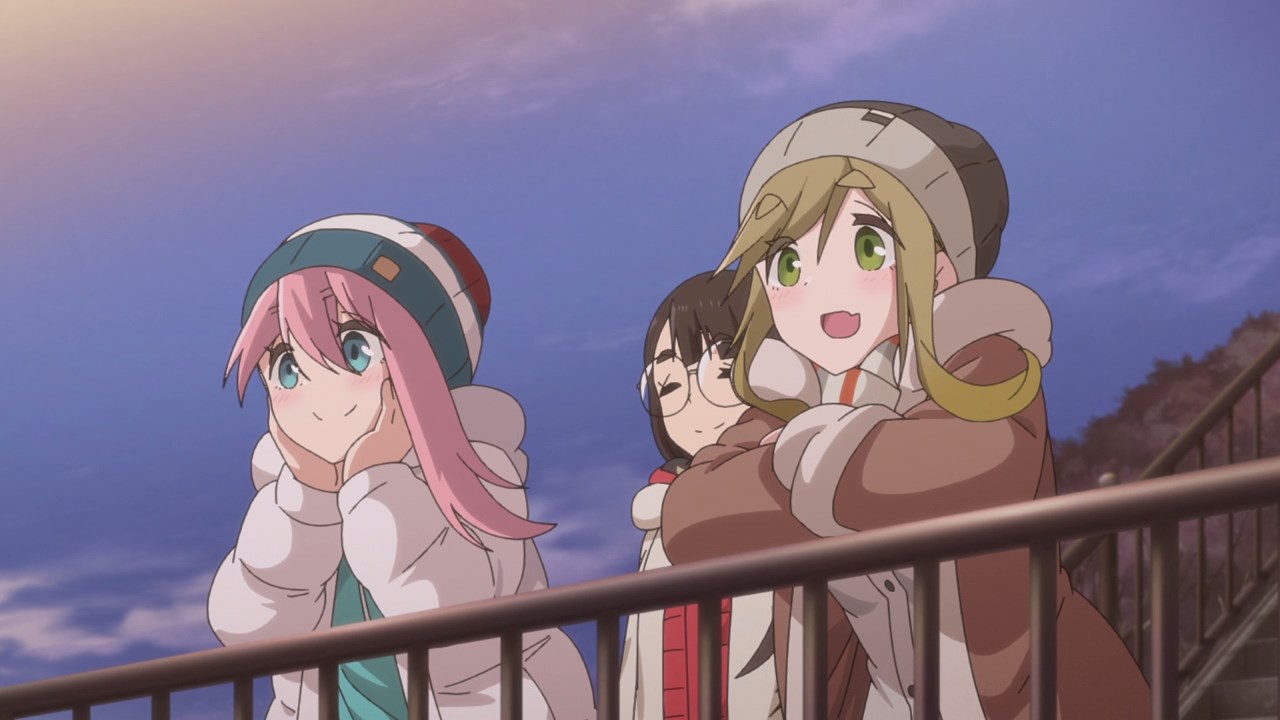 In any case, looks like Nadeshiko Kagamihara and Aoi Inuyama got freshened up after a relaxing bath at Cape Mihama, although they’re curious on what gift they’ll receive on their birthday. Okay you two, how did you know about it? 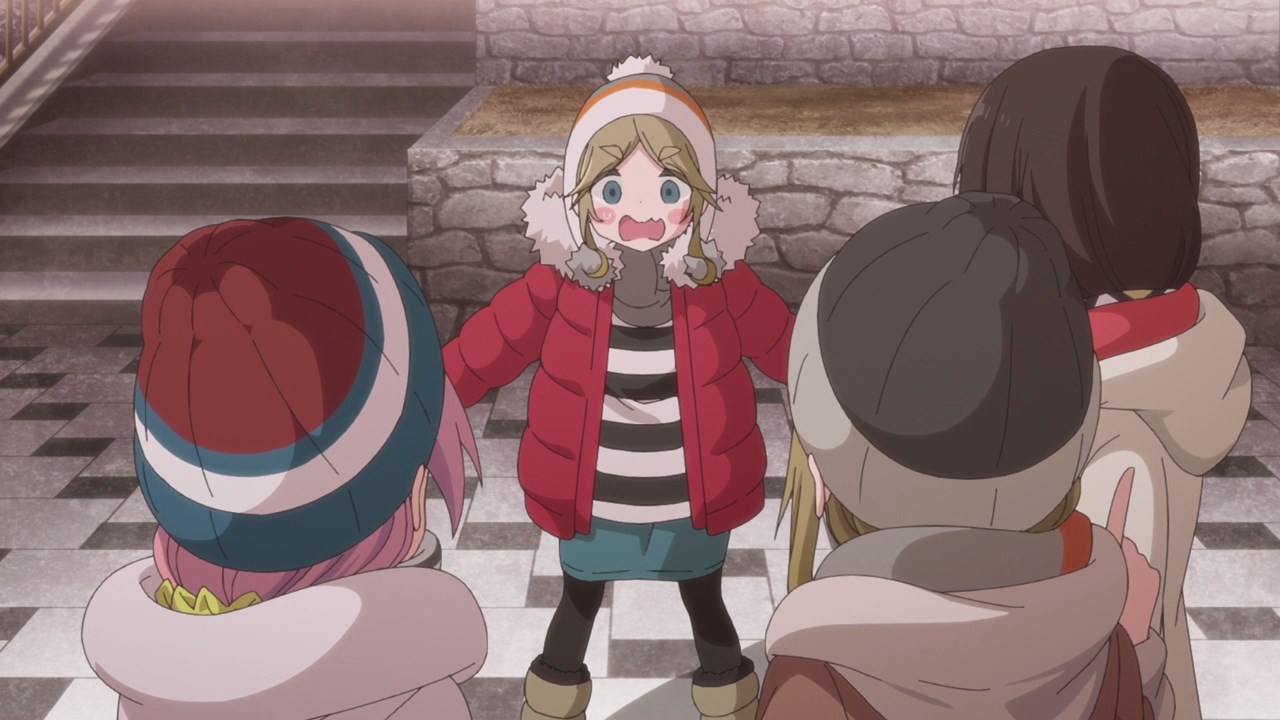 Even Akari-chan is shocked that her elder sister and Nadeshiko will have a birthday celebration tonight. You know what, I think it’s time to take these girls back to Daruma-no-mori Campsite. 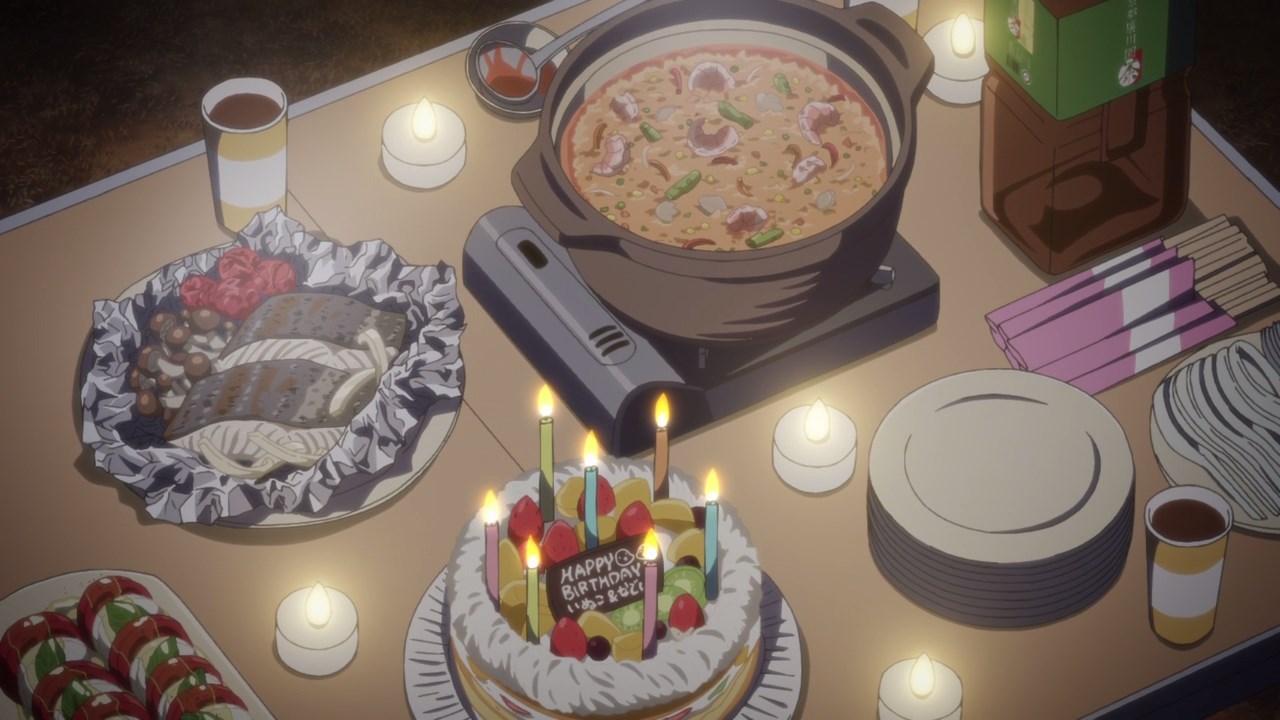 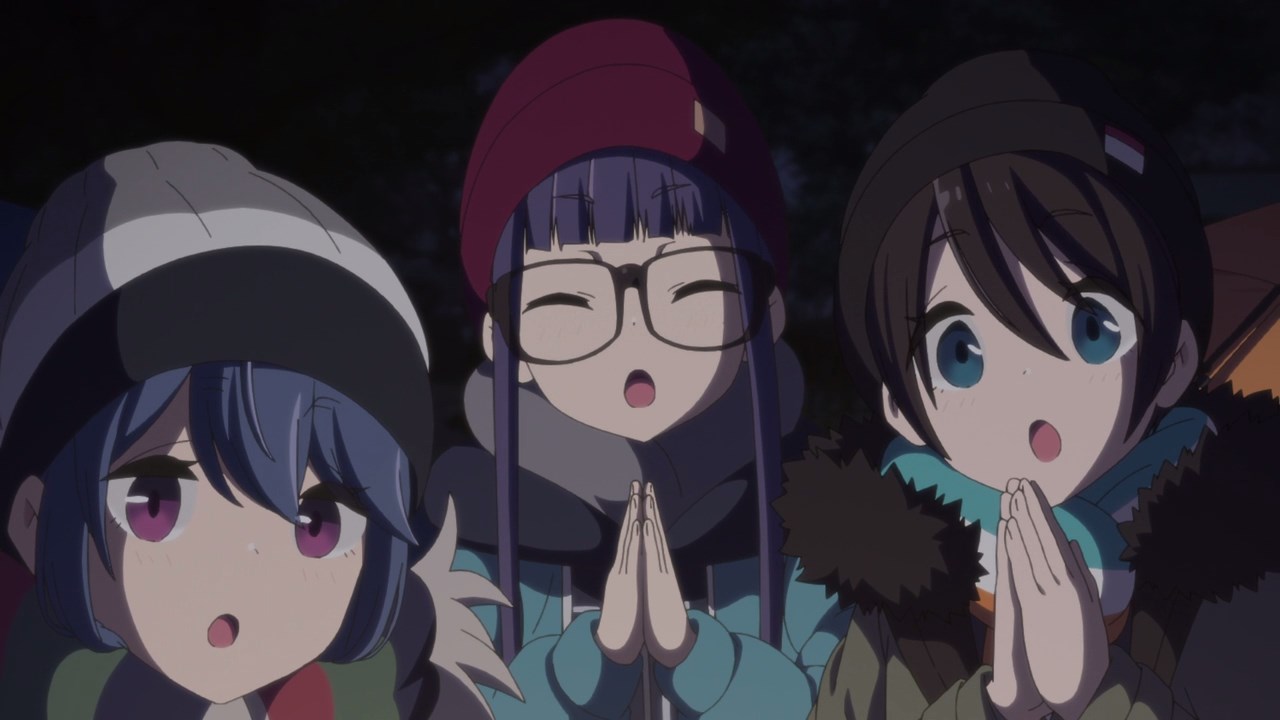 With that said, Nadeshiko and Aoi-chan have returned to the campsite where Shimarin and the rest greeted them a happy birthday. And as you can see, they made a scrumptious feast for this occasion. 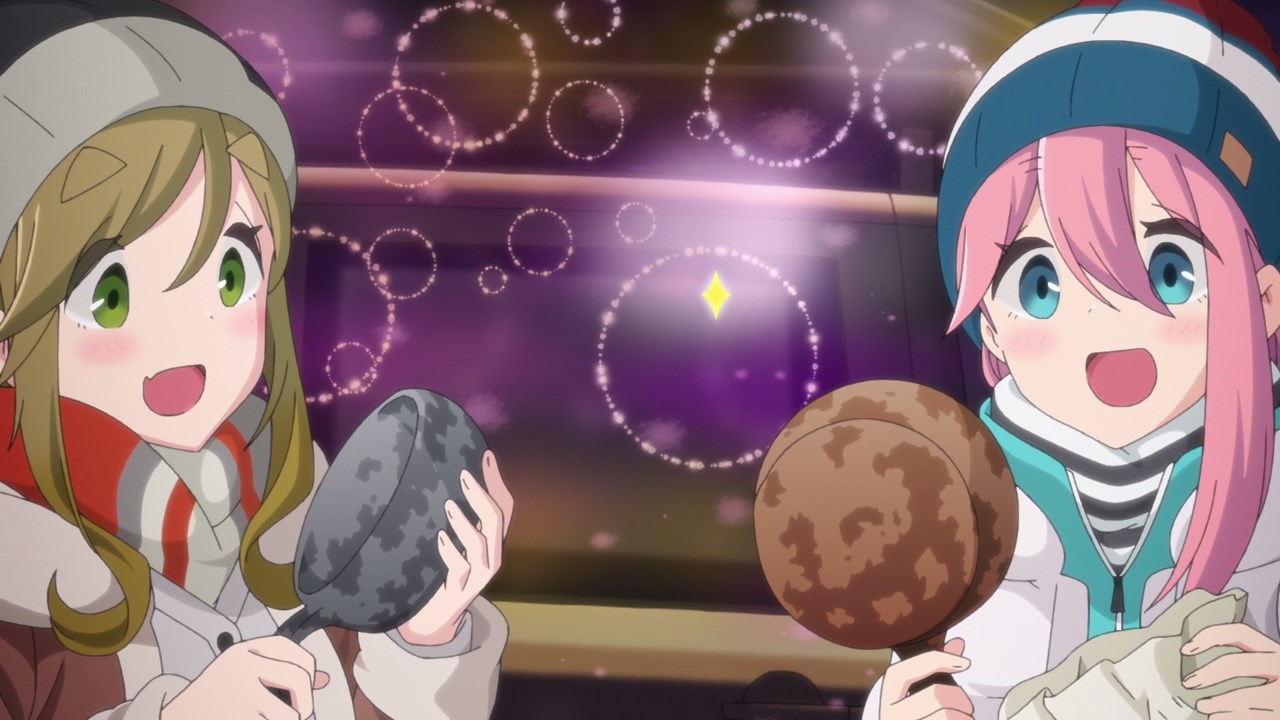 Not only that, but Rin-chan and the rest bought bought wooden cookware from Caribou as presents for Aoi-chan and Nadeshiko. Well it’s nice that they got birthday gifts on this special camping trip. 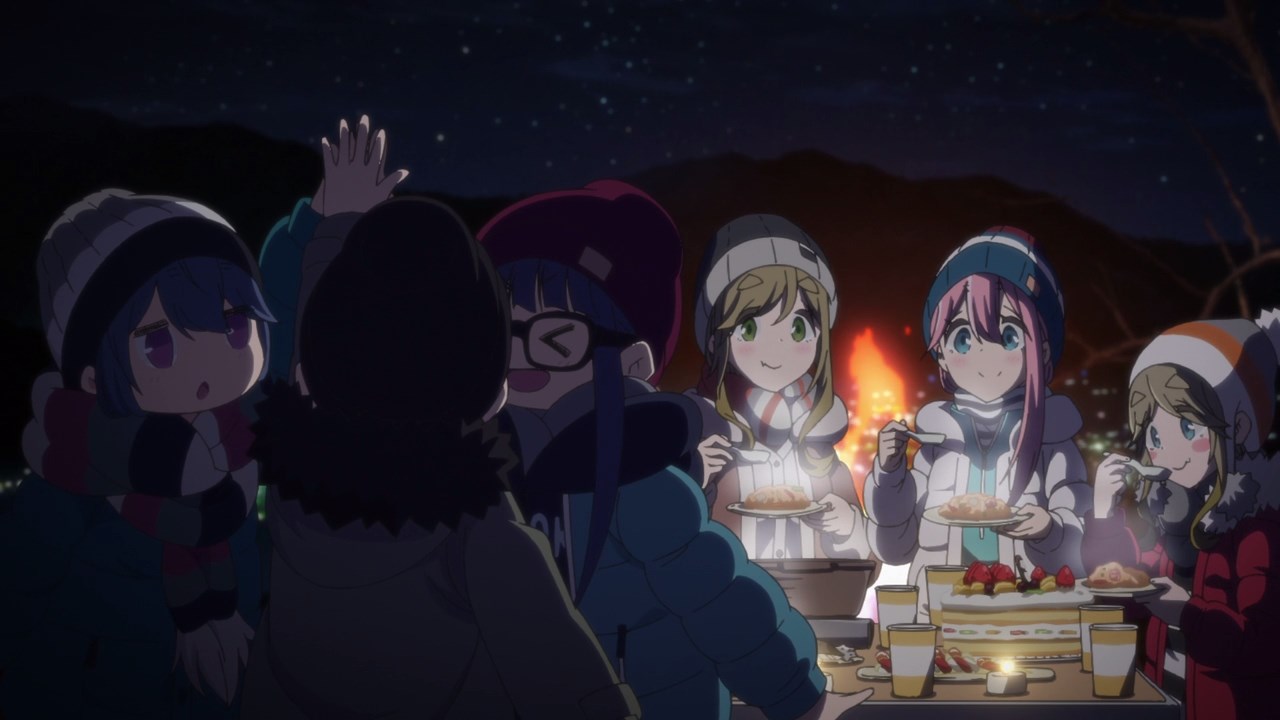 But with that said, looks like Rin Shima and the rest did a great job on throwing a birthday party for both Nadeshiko Kagamihara and Aoi Inuyama. And now, it’s time for these girls to chow down some delicious food! 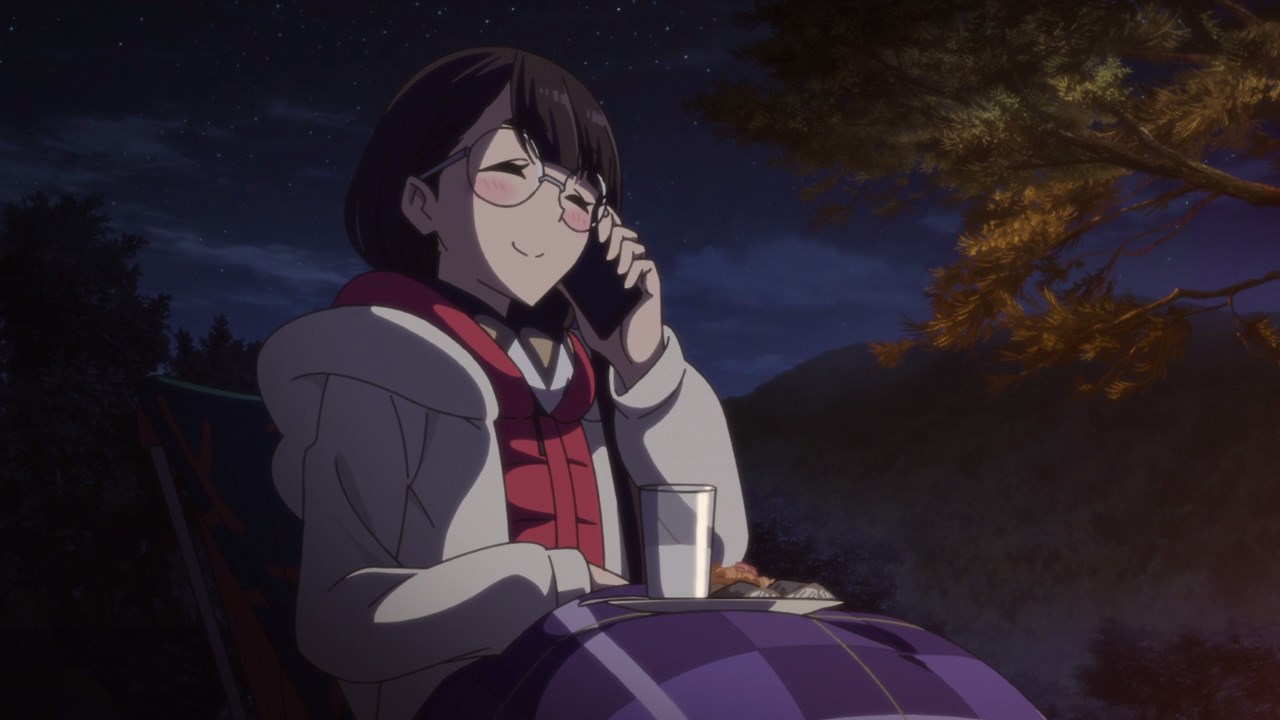 One last thing, looks like Minami Toba got a call from her sister Ryouko in which she’s camping somewhere near Mt. Fuji, although Ryouko warned Minami to cut down on alcohol consumption. 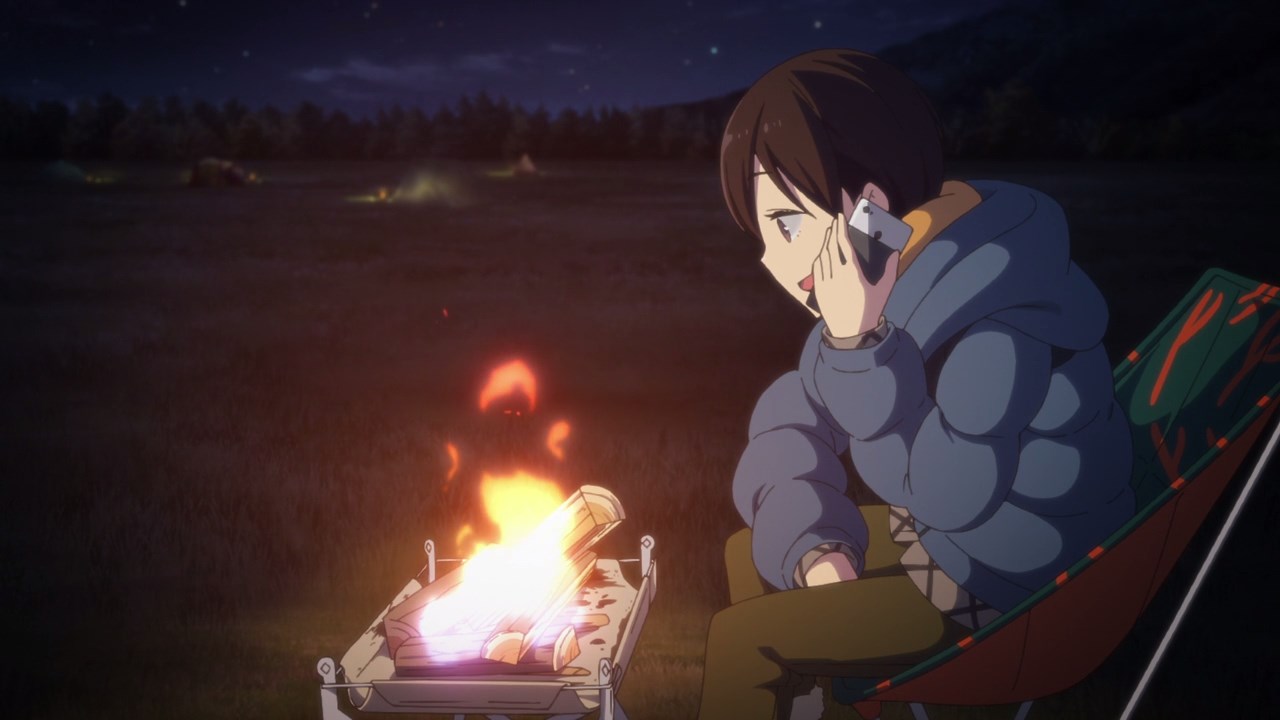 Speaking of Ryouko, she told her elder sister to stay safe there ’cause even though being a club advisor is tough, at least it’s enjoyable because you have the Outdoor Club camping at various places in Japan.

I still can’t believe that Ryouko Toba looked like a dude upon seeing her back in the 1st season, but I’m glad that she’s back for this episode. 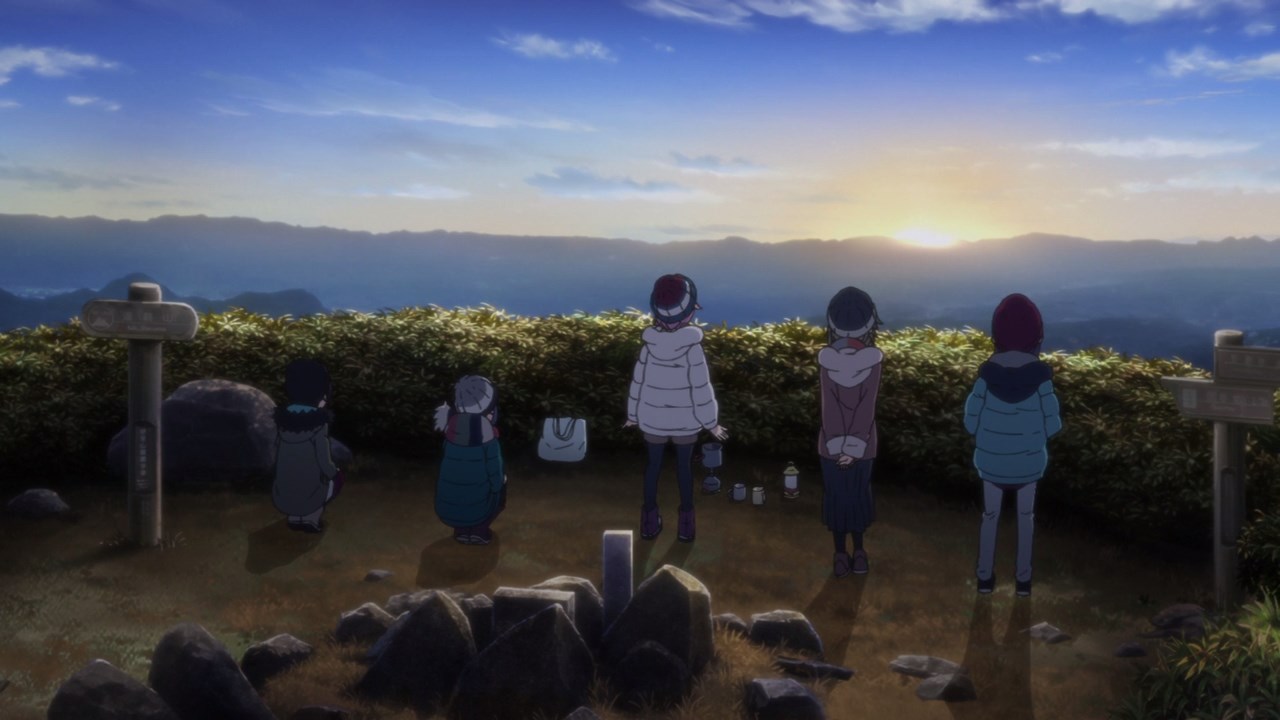 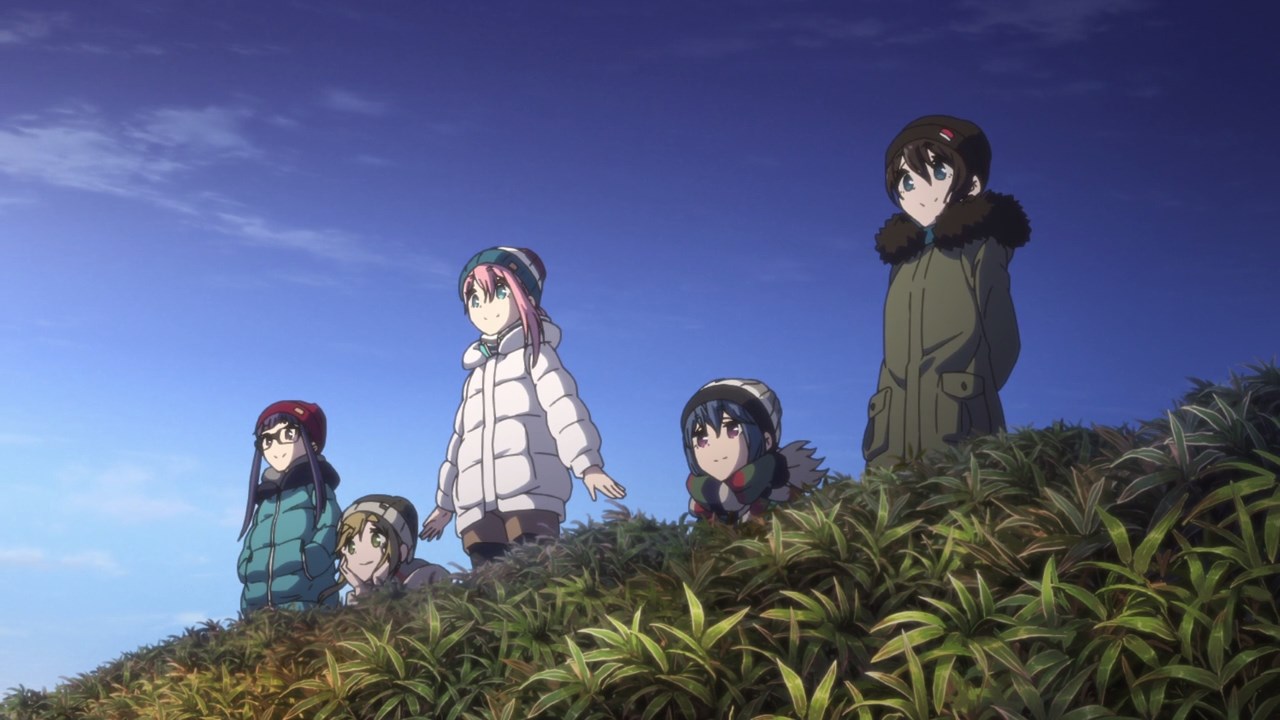 Well then, it’s time to end this week’s episode where the girls witness the sunrise at Mt. Daruma. Gotta say that it’s a good way to end their camping trip!

Sadly, the next episode will be the last one as I’m gonna miss Nadeshiko Kagamihara and her friends.