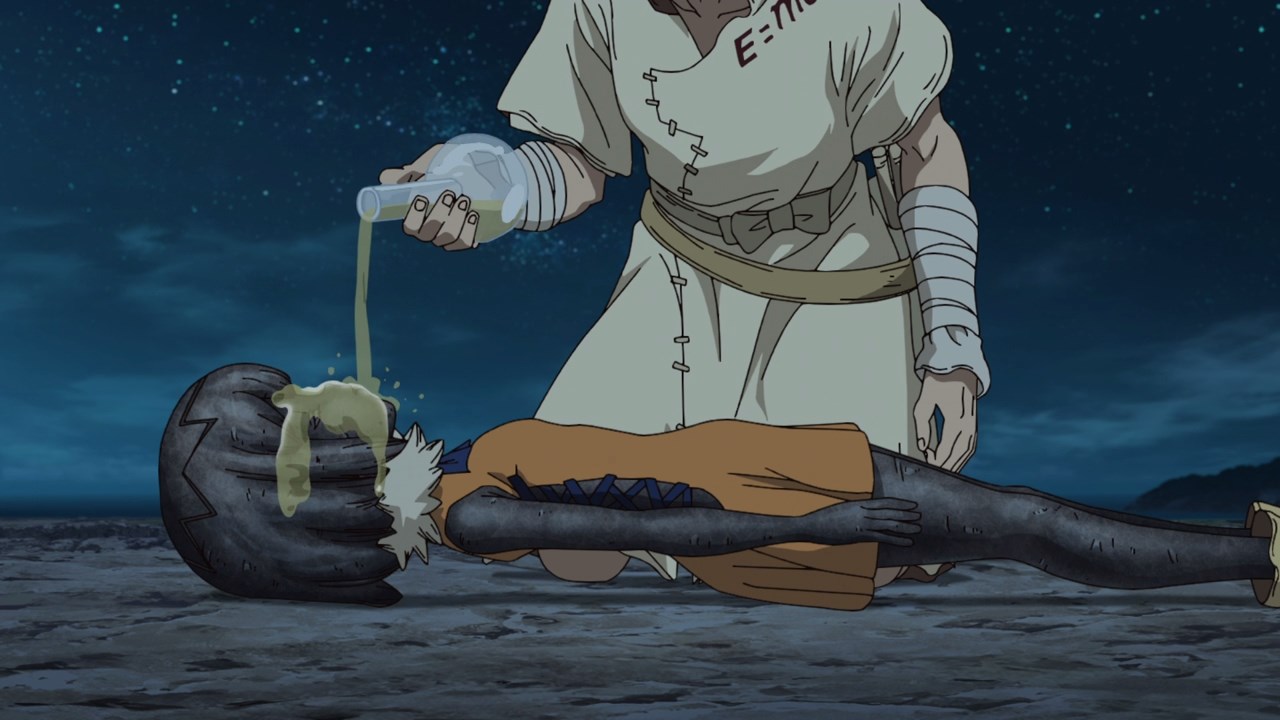 Well everyone, it’s the moment of truth where Senku is about to revive Tsukasa Shishio’s little sister Mirai who is not only petrified, but also in a coma.

Given that she’s asleep for a very long time, I’m scared that Mirai might be brain dead once Senku pours de-petrification fluid onto her. 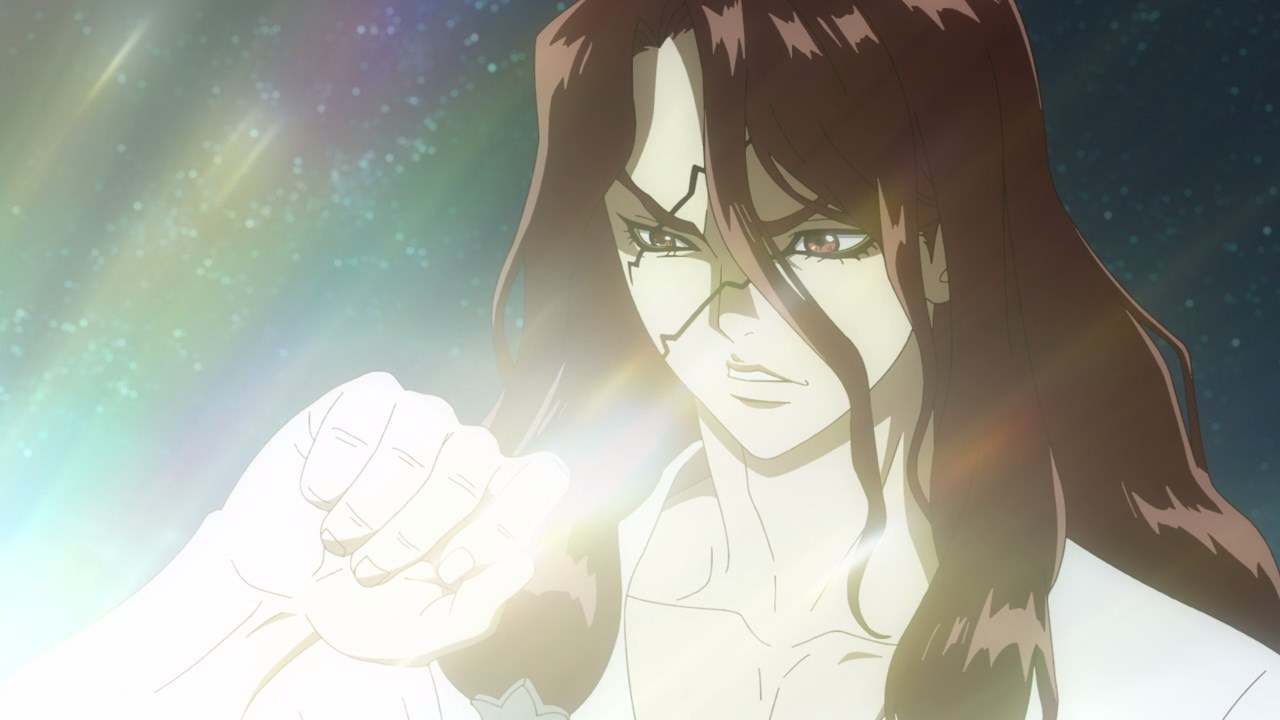 In any case, Tsukasa Shishio will see something that’s either a miracle or a disaster as the petrified shell is starting to crack on Mirai’s body. 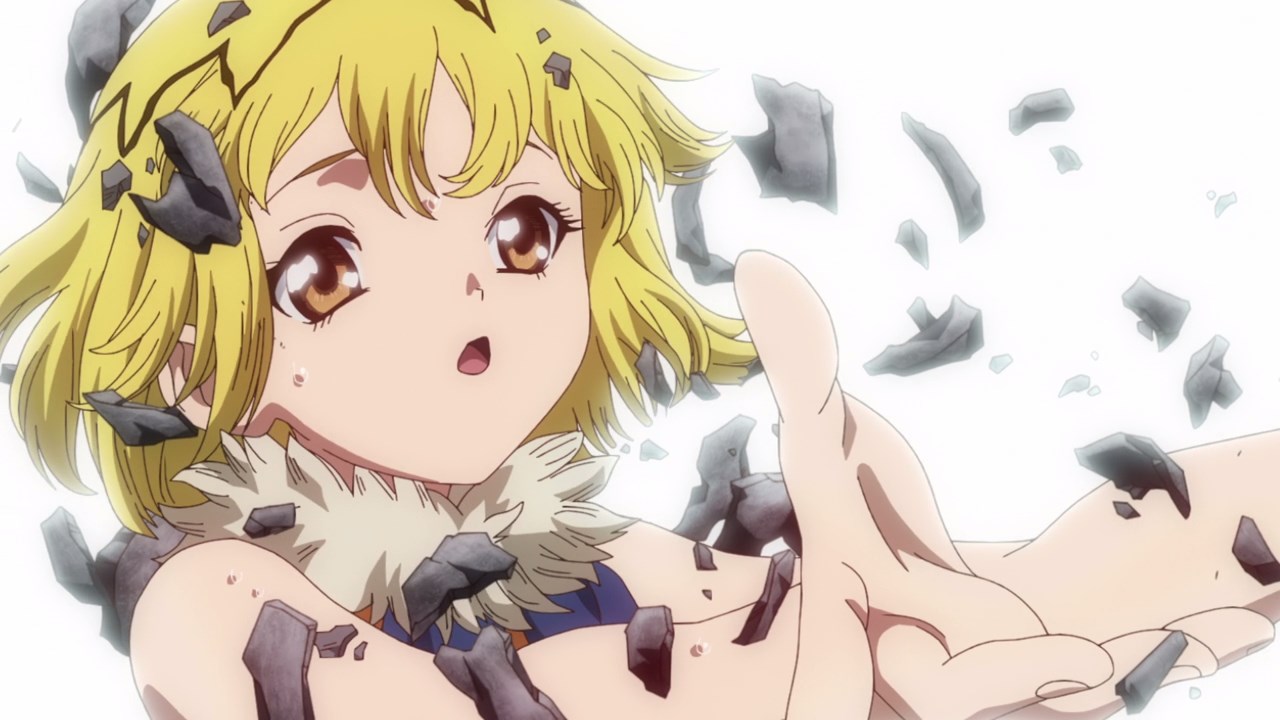 And it turns out that Mirai is not only free from her petrification, but she finally woke up from her coma.

All I can say is that Senku made a miracle in which Tsukasa is very happy to see his sister alive. 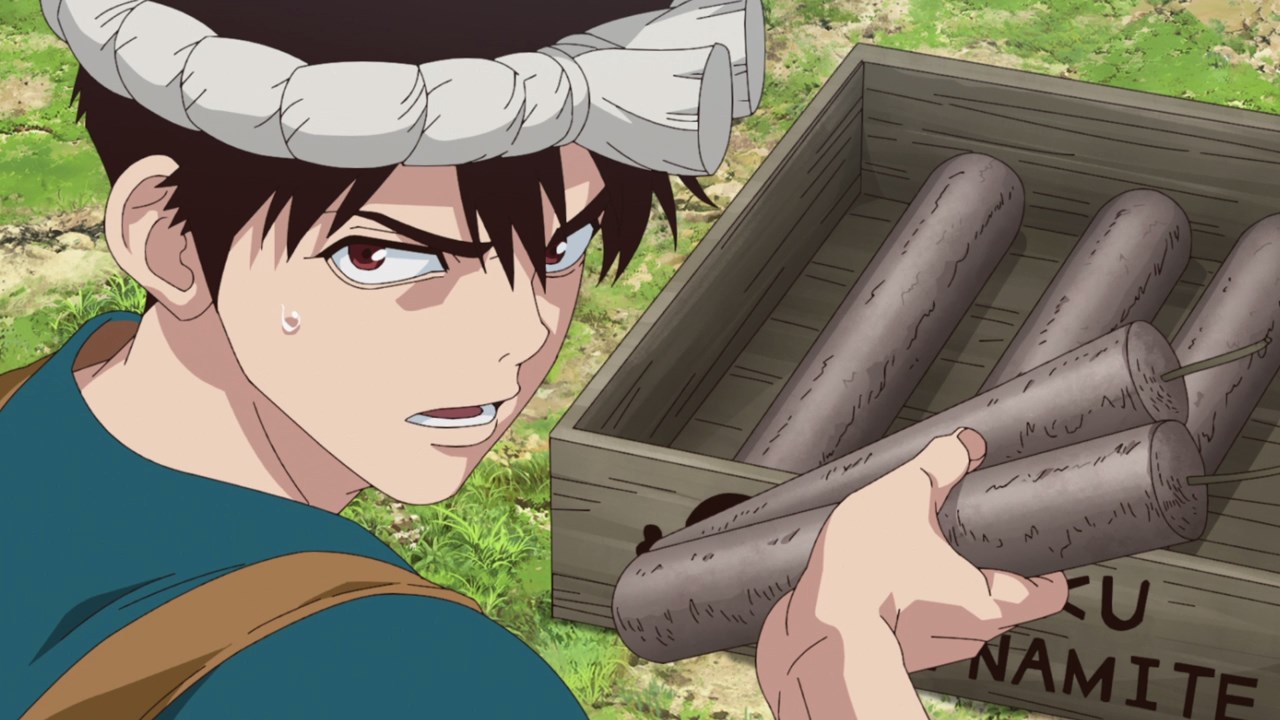 However, it appears that someone stole a few sticks of dynamite as Chrome pointed out. Oh boy, I have a feeling that Hyoga’s betrayal plan is already begun. 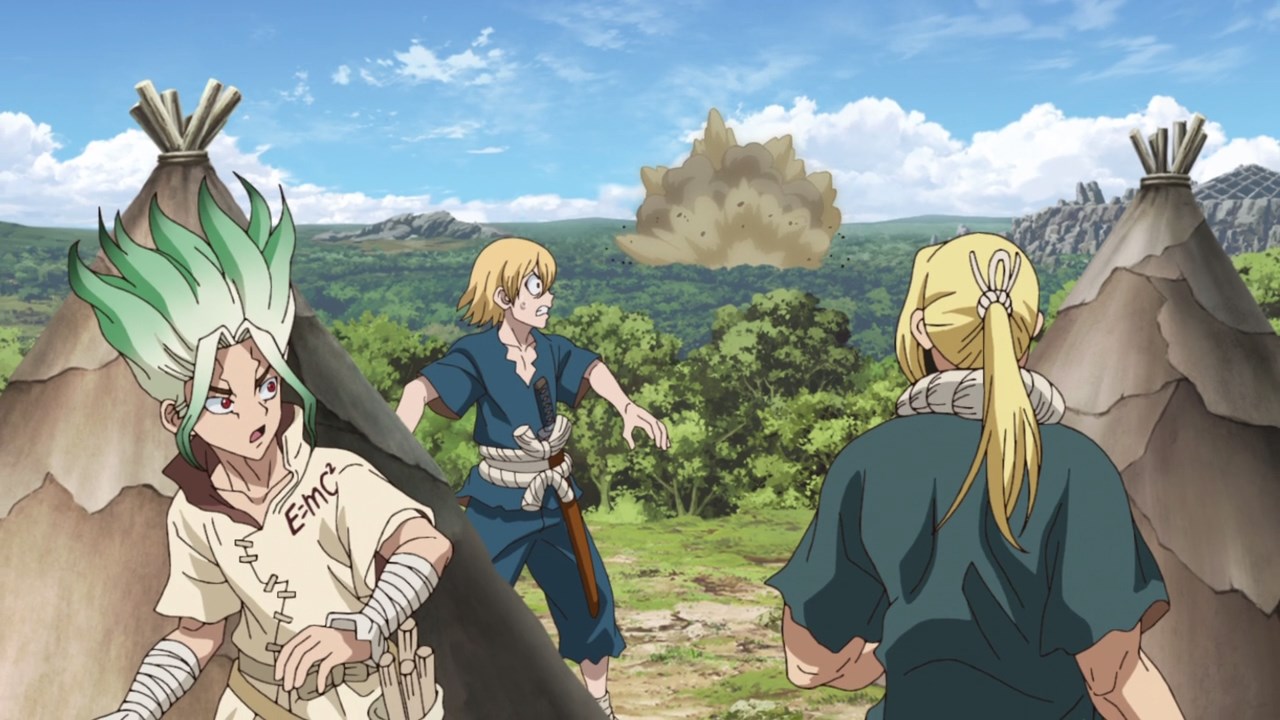 And the first order of business will be destroying the Miracle Cave where no one will have access to bat guano or nitric acid. Then again, Hyoga didn’t blast the cave with dynamite. 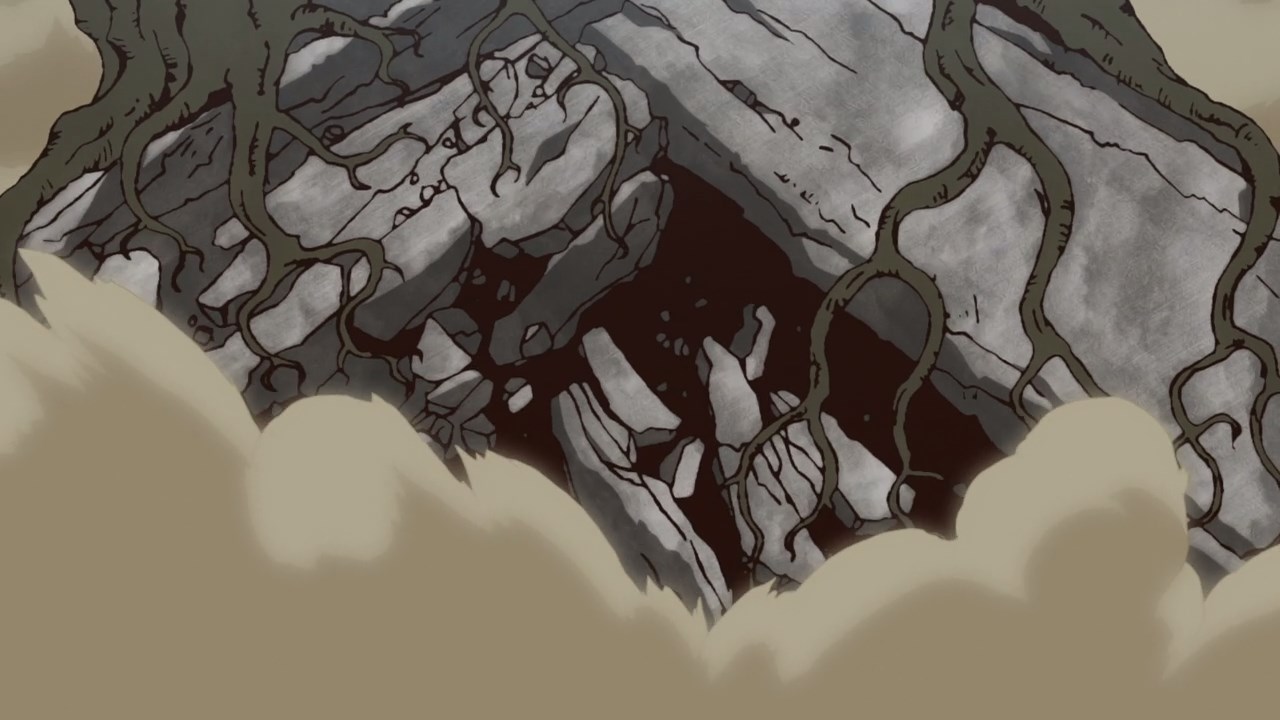 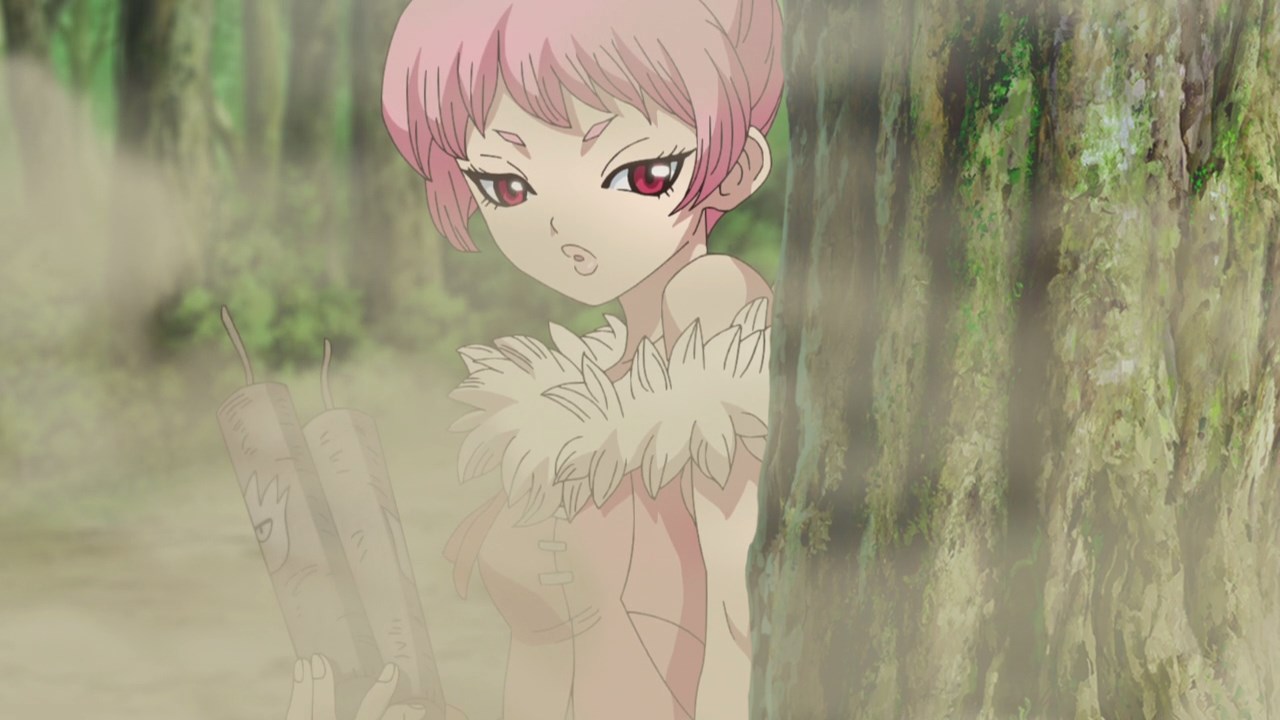 Turns out that it’s actually Homura who escaped her cell and stole some dynamite to destroy the Miracle Cave.

Okay, how come Homura decided to help Hyoga rather than staying as a captive? I have a feeling that someone set her free. 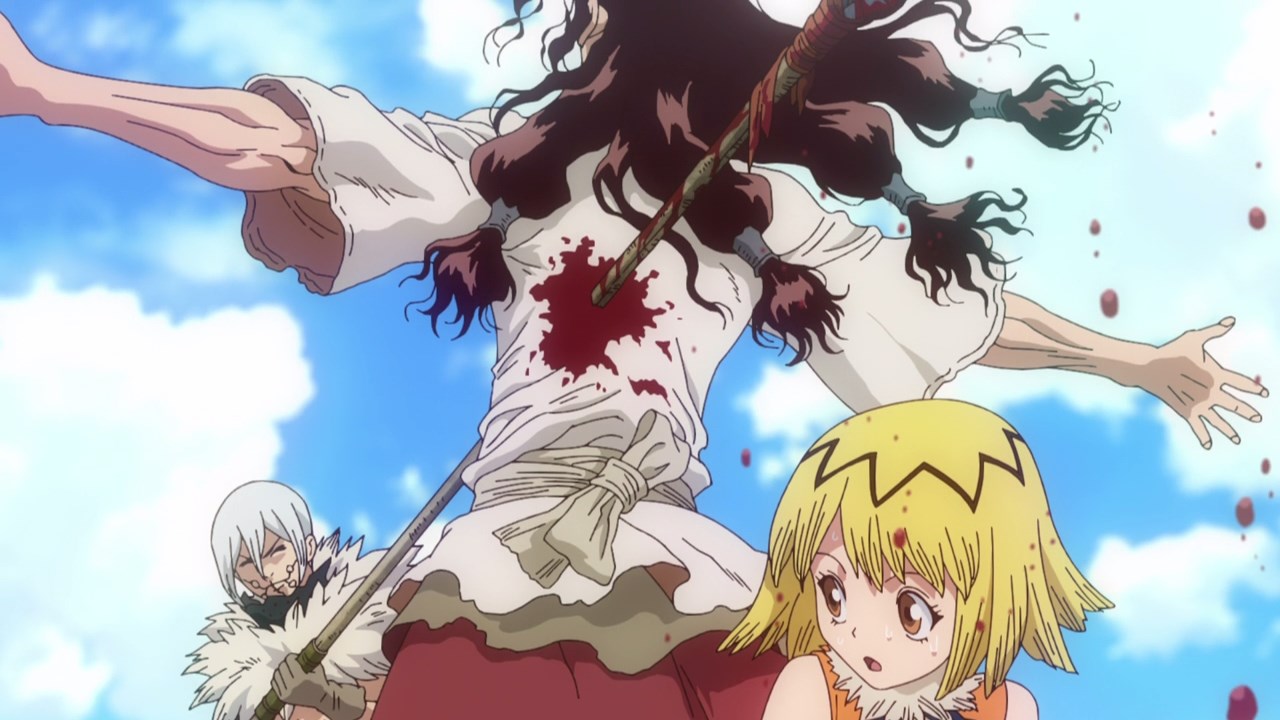 Meanwhile, let’s move onto Hyoga where he stabbed Tsukasa Shishio to the heart.

It took long enough for Tsukasa to realize Hyoga’s true intentions as he tries to defend Mirai from being killed, although I’m worried that Shishio might die from his wounds. 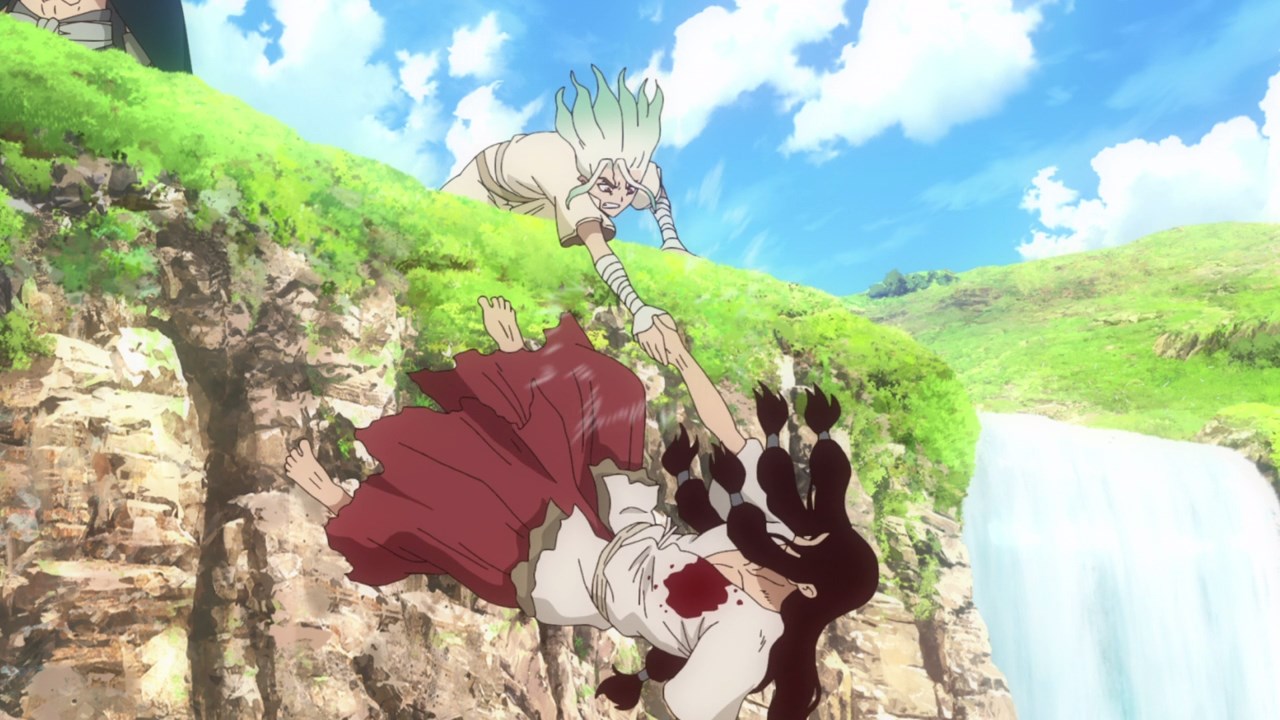 Fortunately, Senku has arrived to rescue Tsukasa Shishio, but he’s still in danger as Hyoga might kill him. I think Senku should wear some armor in case Hyoga stabs him. 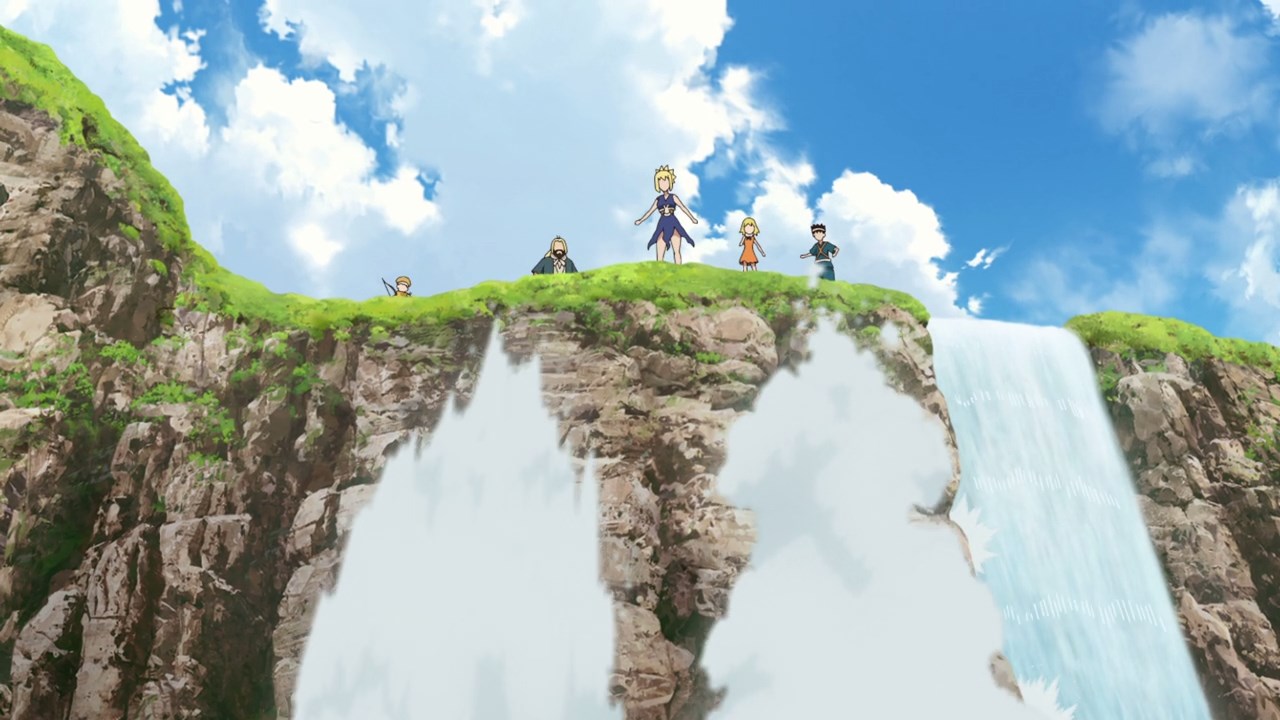 However, it appears that both Senku and Tsukasa Shishio fell down to the river. While Kohaku tries to save both of them, her father Kokuyou stop her ’cause he doesn’t want to lose his precious daughter.

Still, I’m hoping that Senku and Tsukasa are okay ’cause they’re being swept away by the current. 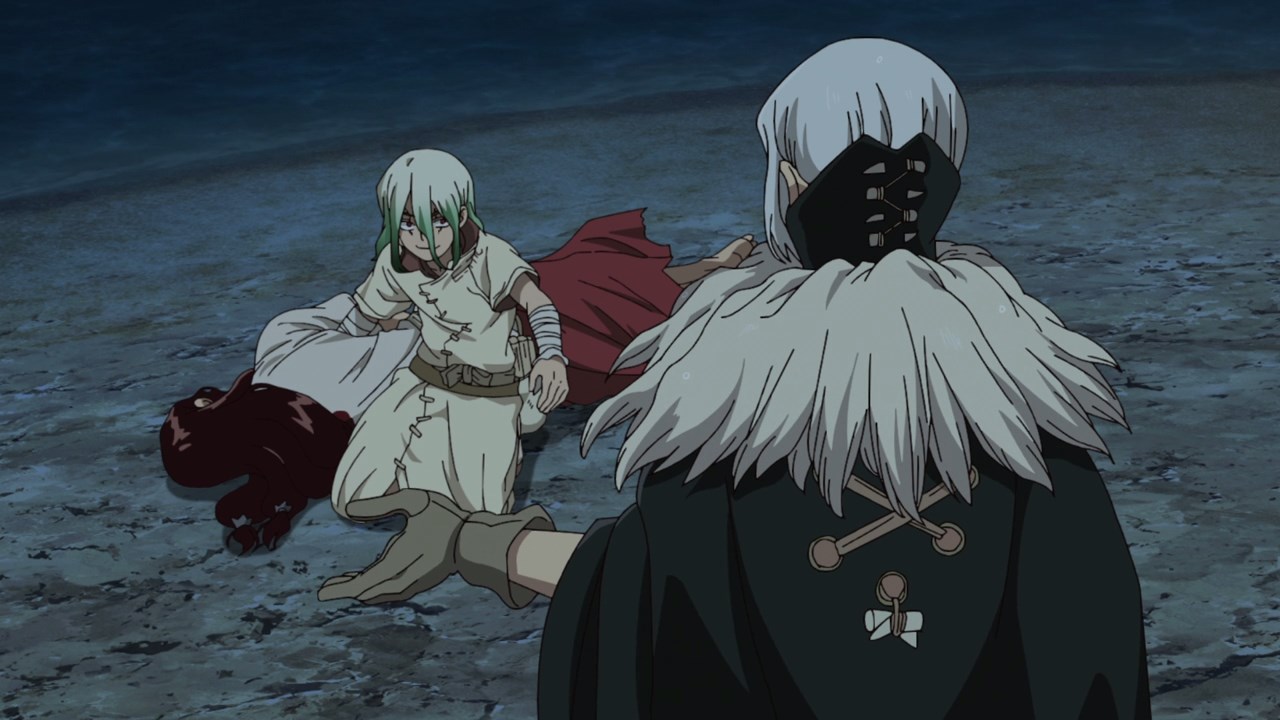 Fortunately, they managed to survive but let’s not forget that Tsukasa Shishio is still injured thanks to Hyoga stabbing him with his spear. 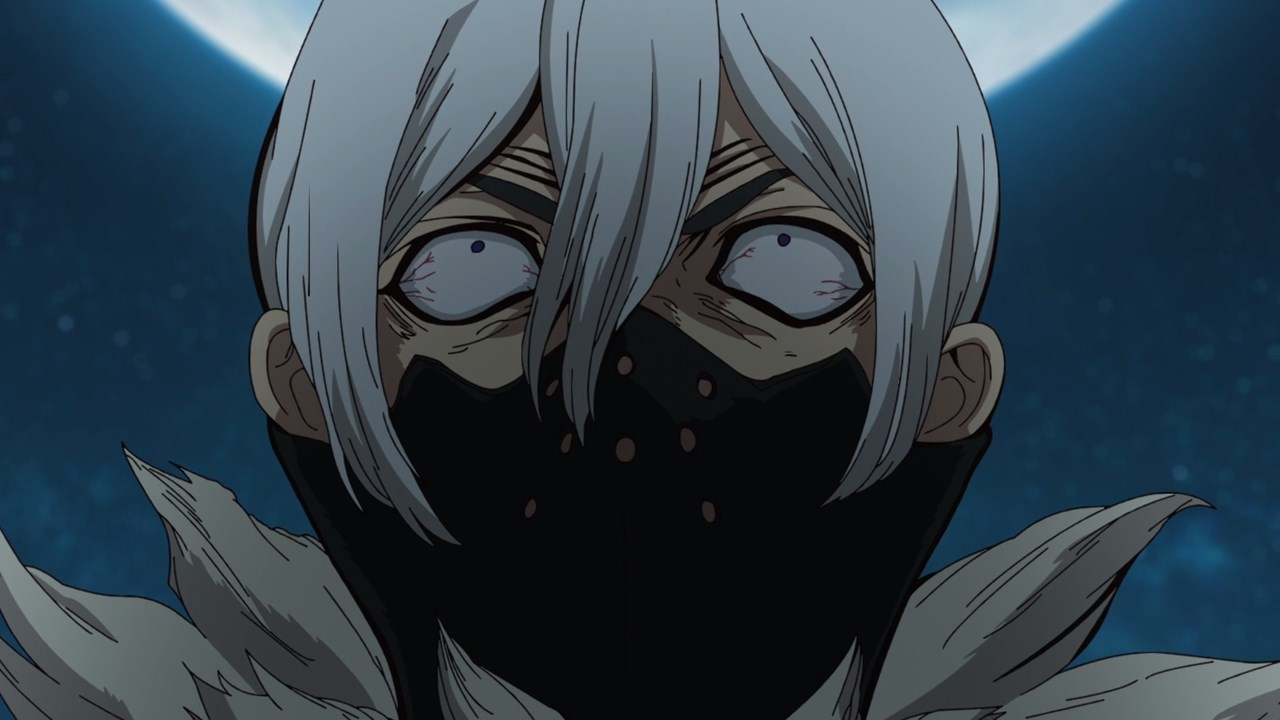 Speaking of Hyoga, he offered Senku to join him on creating a new world order where the strongest and most cunning people rule over the weak.

While it’s a nice proposition, I don’t think it’ll work in the long run because Hyoga might kill Senku off once he’s done with him. Besides, Senku will revive all people rather than a select few. 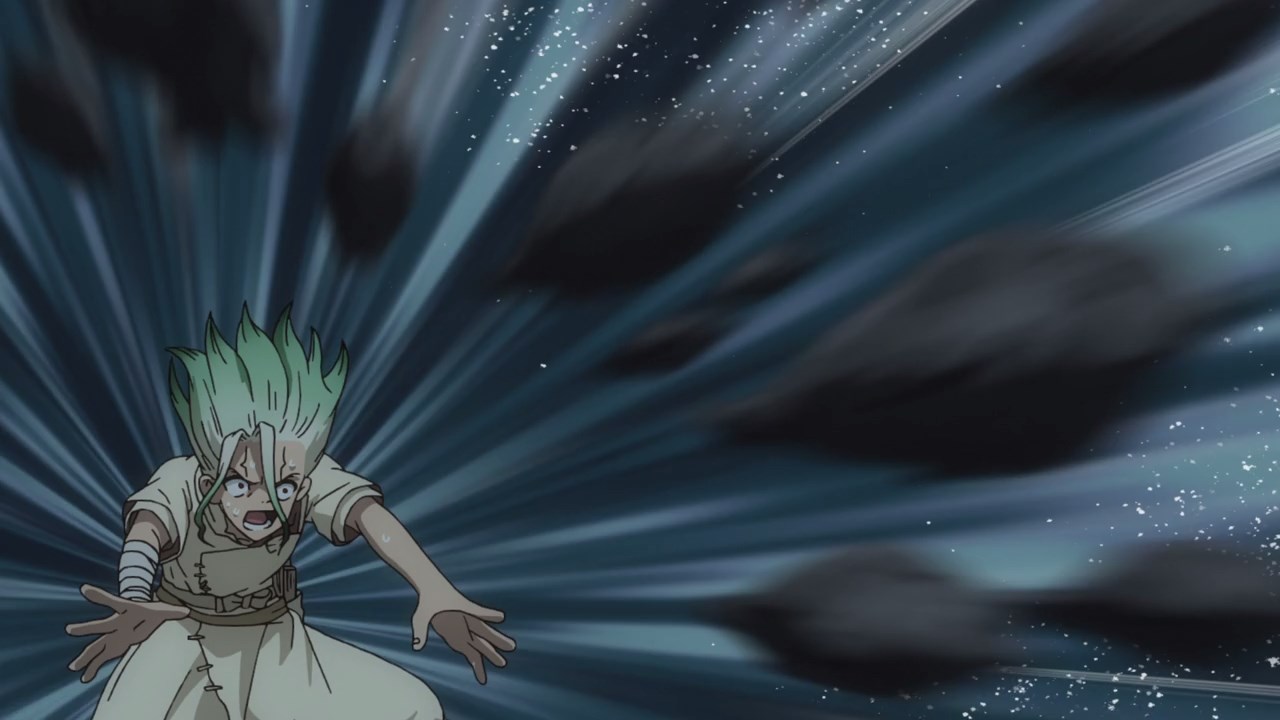 With that said, the chief of Ishigami Village refused Hyoga’s offer as Senku throws rocks. Of course, it’s not effective against the strongest spearman as Hyoga will pulverize them. 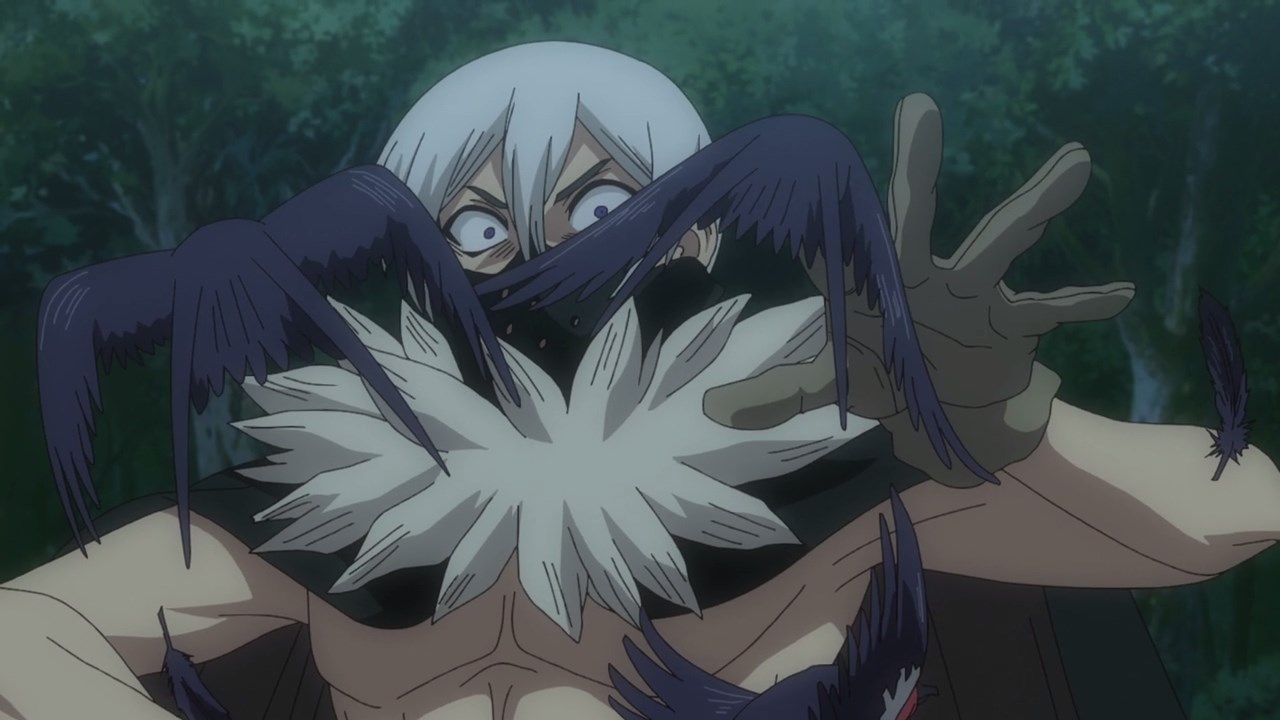 Actually, turns out that Senku throws birds that broke free from petrification. And really, it’s effective against Hyoga where he got spooked by newly-revived birds. 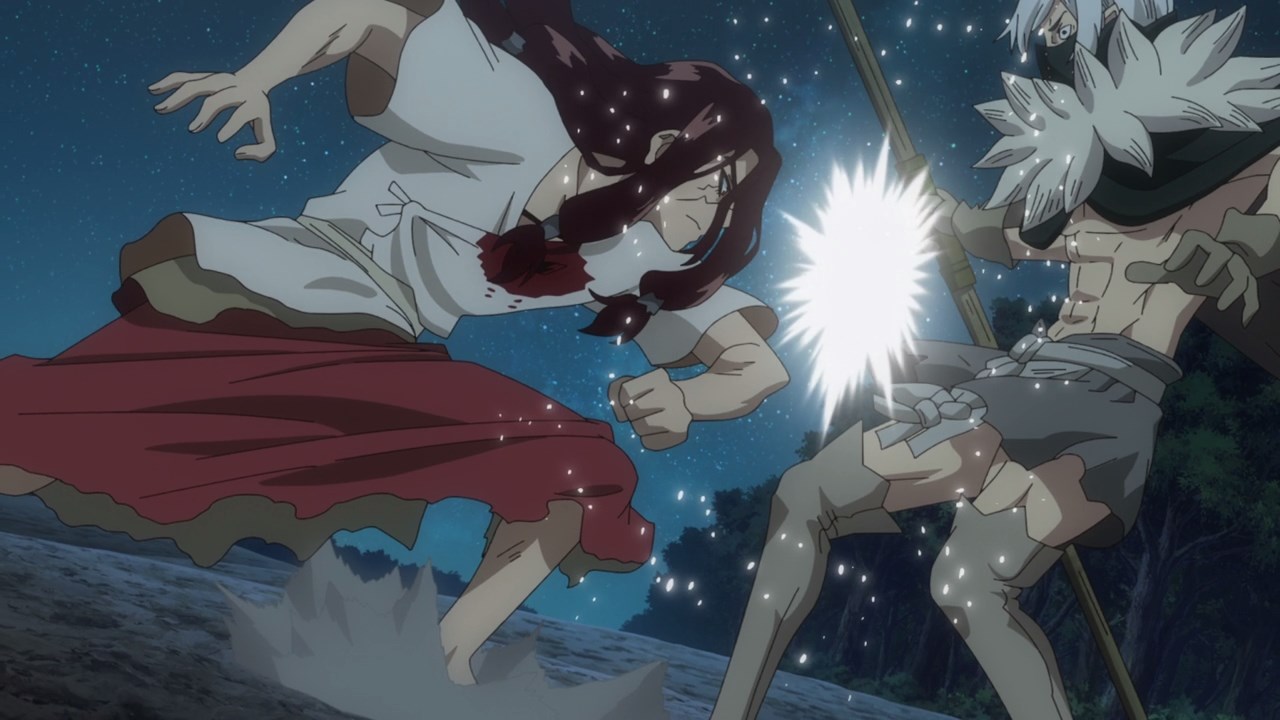 Also, here’s Tsukasa Shishio where he’s still alive and kicking as he grabs Hyoga’s stone-tipped spear. Then again, I’m still scared that Hyoga might stab Tsukasa to the chest again. 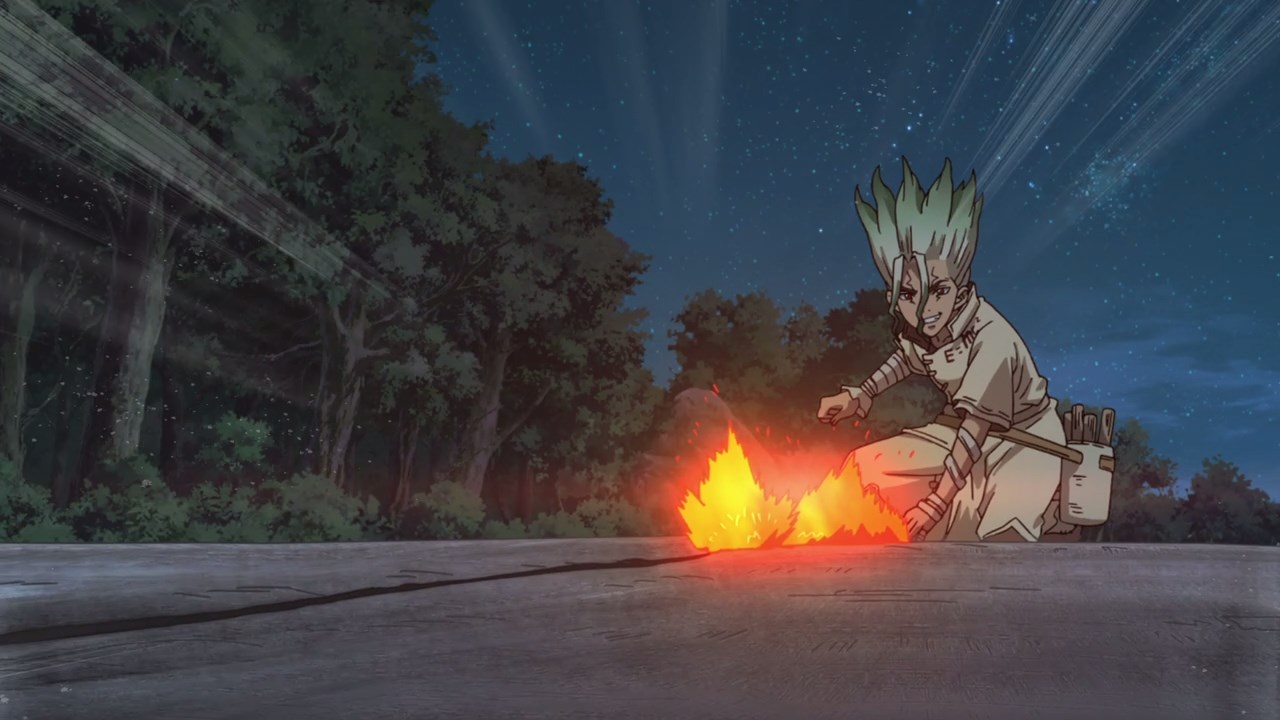 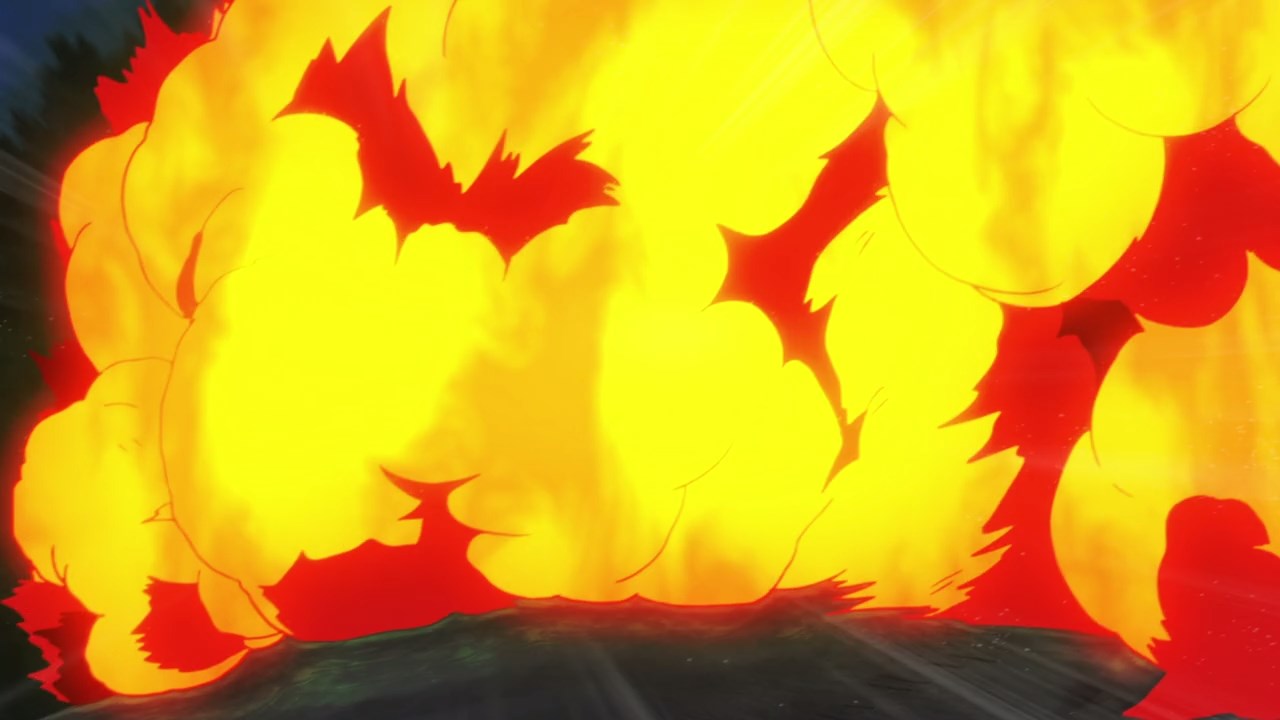 But thanks to Tsukasa stopping Hyoga, Senku has enough time to come up with his new magic trick, which involves electricity and some gunpowder to create a fiery explosion. 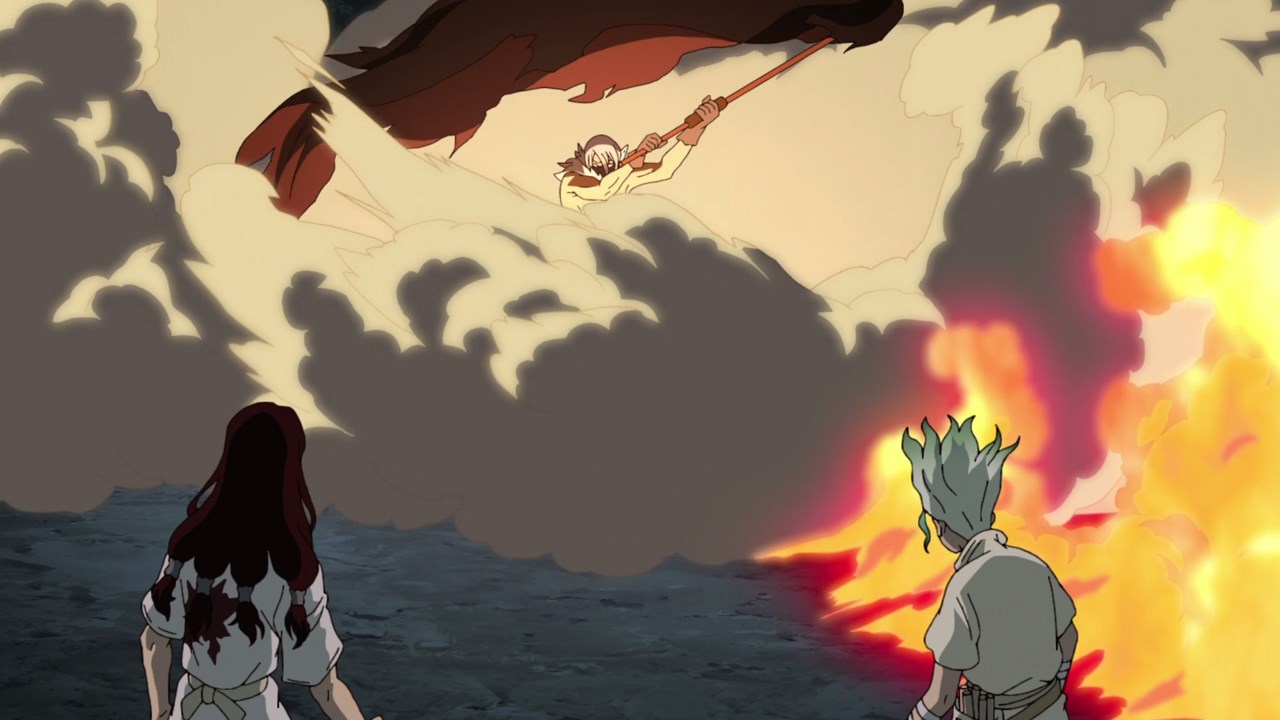 Except that it’s not effective as Hyoga extinguishes the fire by spinning his spear to create a powerful tornado. He’s really insane I have to say it myself! 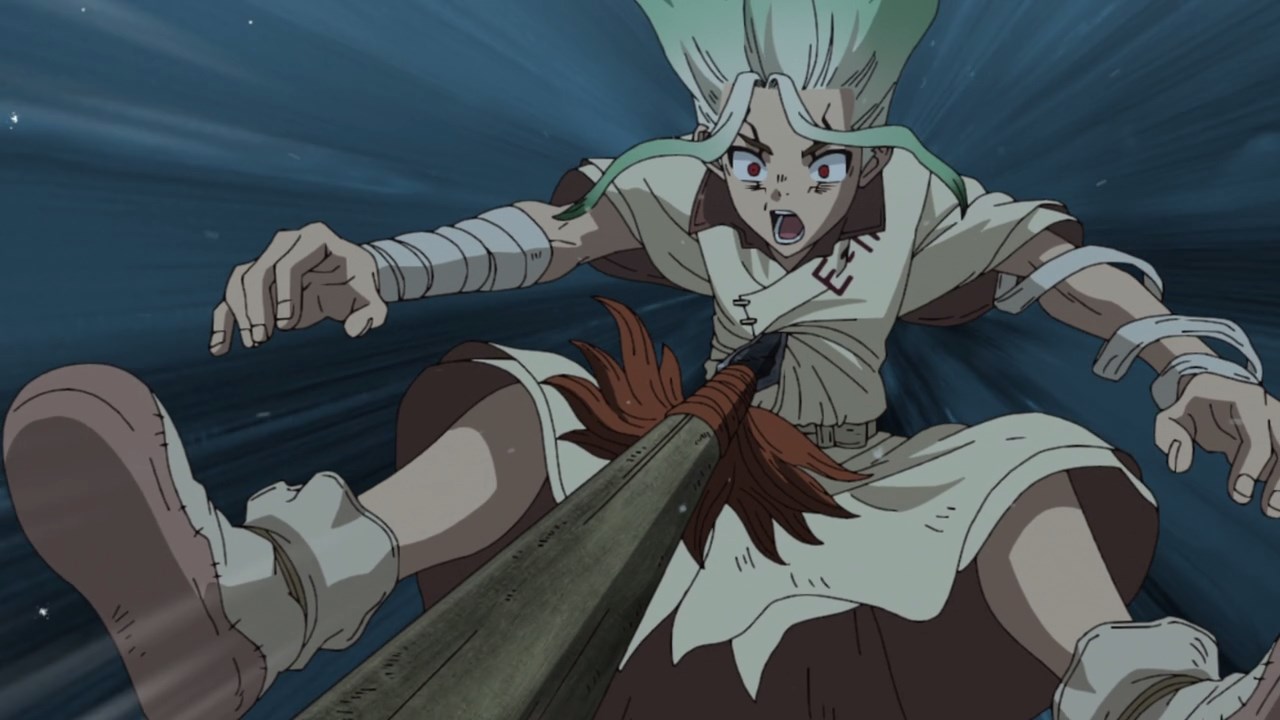 Oh, and Hyoga stabbed Senku to the chest, although it appears that he’s protected by some armor. Still, Senku can’t beat Hyoga no matter how he tries. 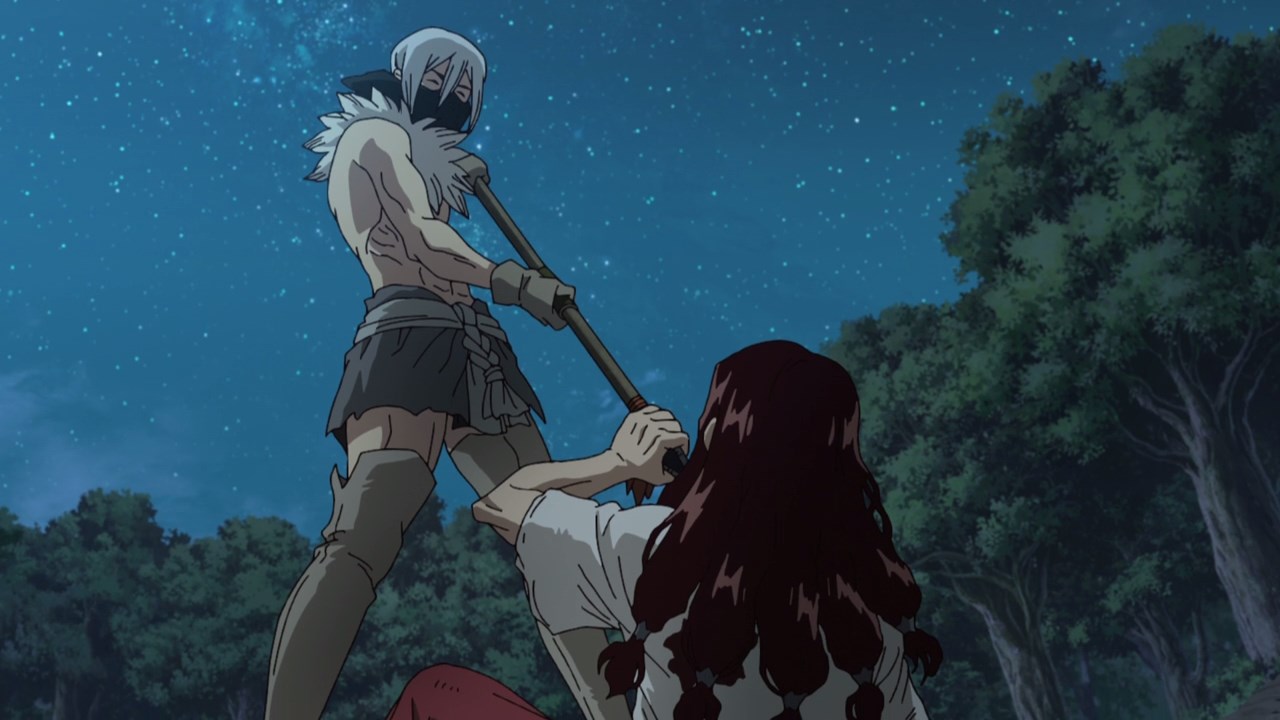 Now then, I guess it’s time for Hyoga to kill the strongest high school student by stabbing Tsukasa to the neck.

Honestly, I can’t bear to look at this because Tsukasa doesn’t want his sister Mirai to live by herself. After all, it’s been a long time since he’s reunited with Mirai. 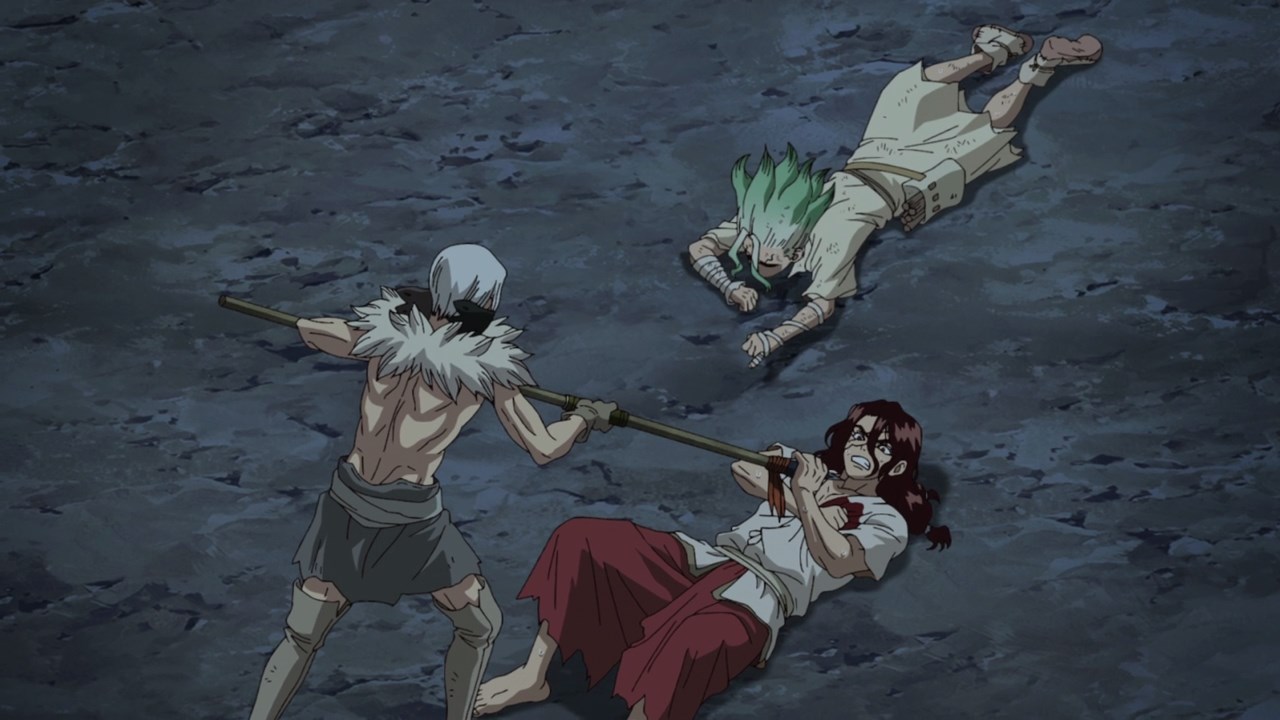 Meanwhile, here’s Senku where he’s still alive, although he’s barely shaken due to Hyoga stabbing him. Good thing Senku is wearing armor underneath his shirt. 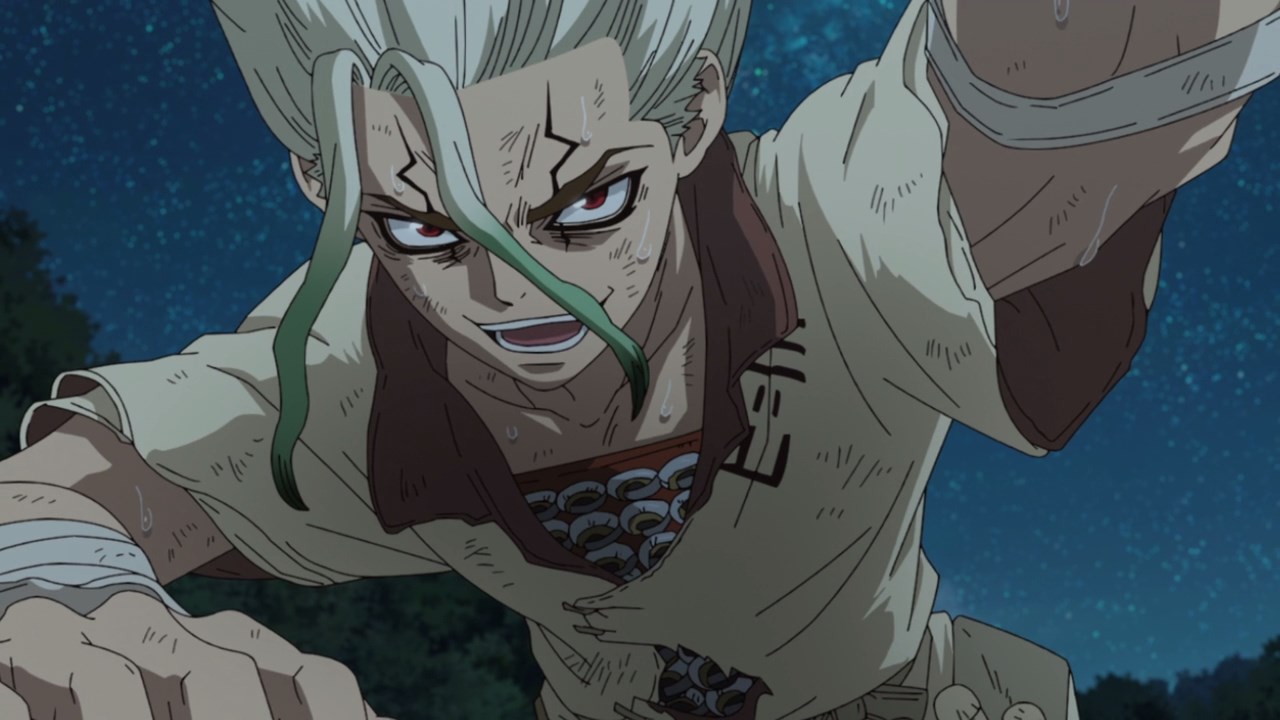 Or rather, he’s wearing a battery pack which is far more dangerous as one powerful thrust would make it explode. Seriously, how come Senku is wearing something that might potentially kill him?

Still, Senku has another trick up on his sleeve as he claimed that he can kill someone with a single touch of his finger. Oh c’mon Senku, you’re not Kenshiro! 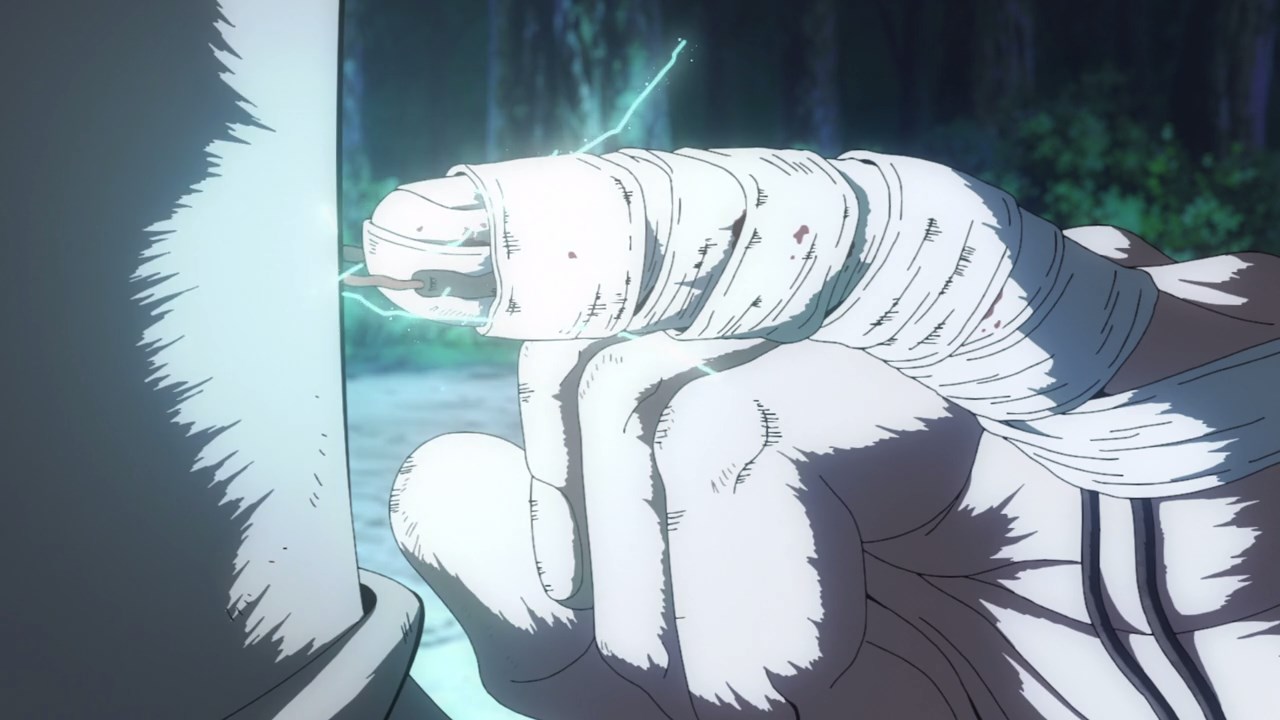 However, it turns out that Senku is capable of killing a person with a touch of his finger as he created the first stun gun. 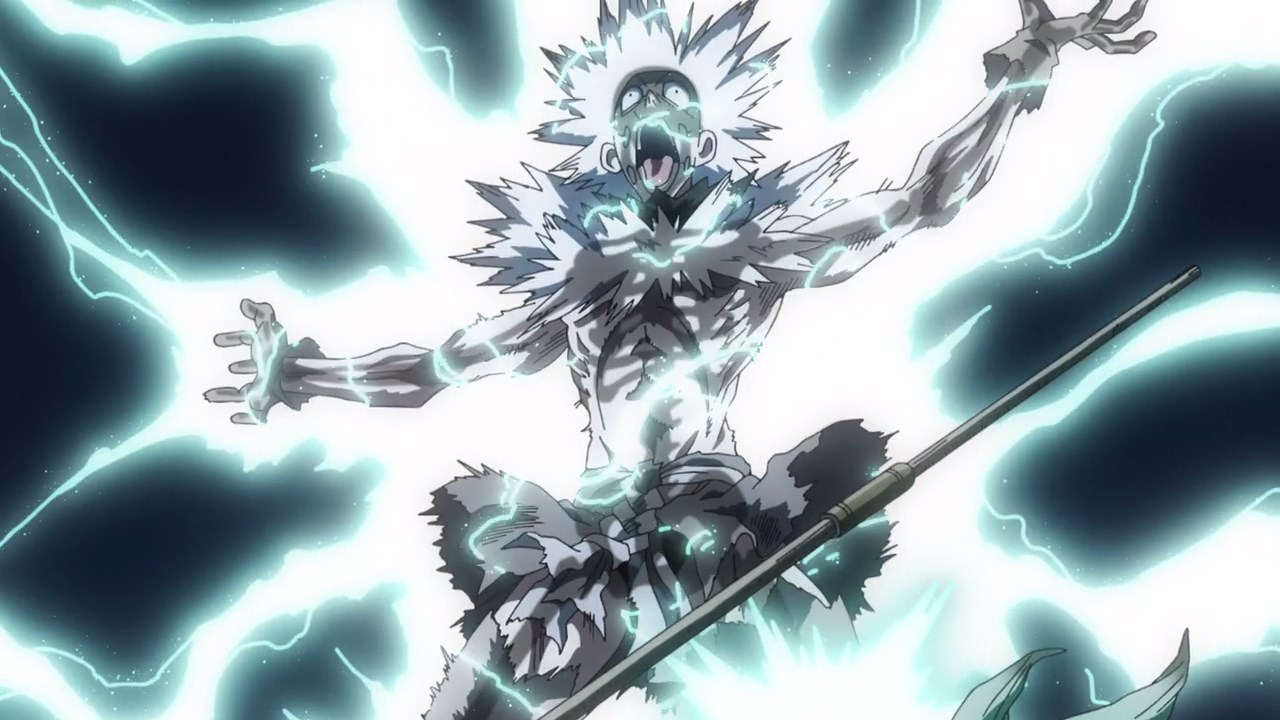 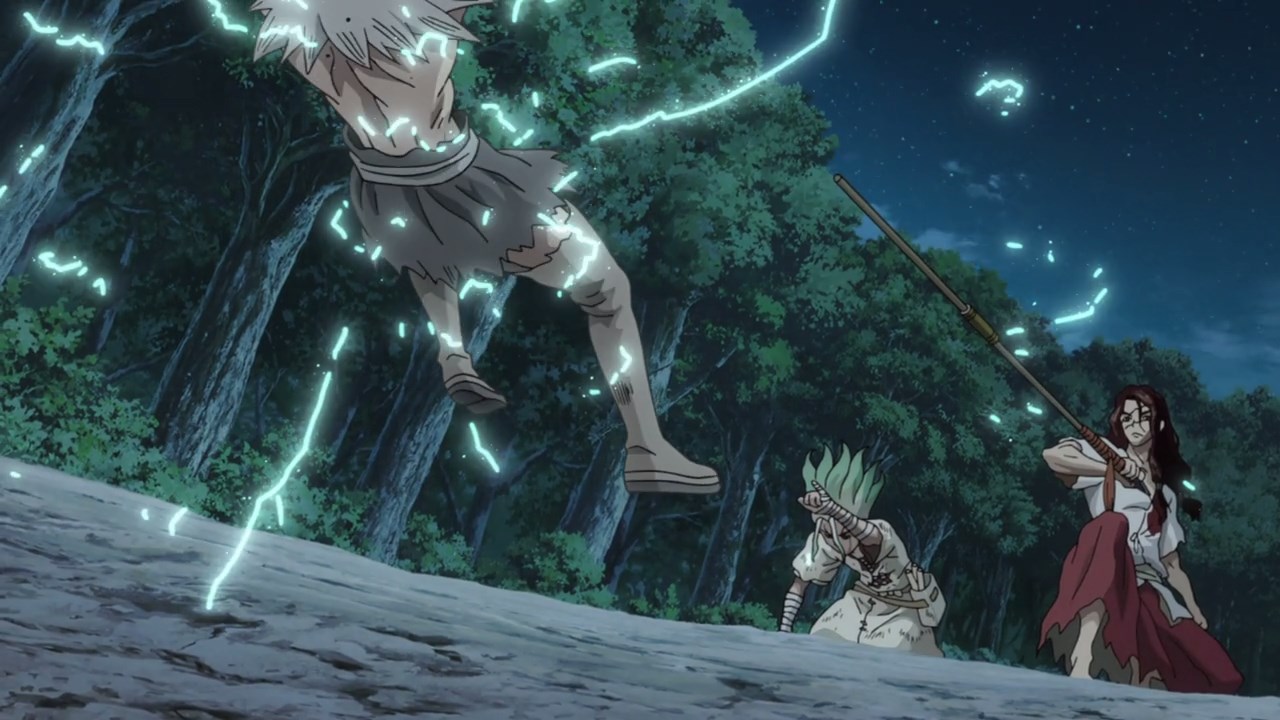 But that takes care of Hyoga’s attempted mutiny thanks to both Senku and Tsukasa. However, I’m still worried that Tsukasa Shishio might die due to his wounds.

Anyways, tune in next time for the final episode of Dr. Stone: Stone Wars!