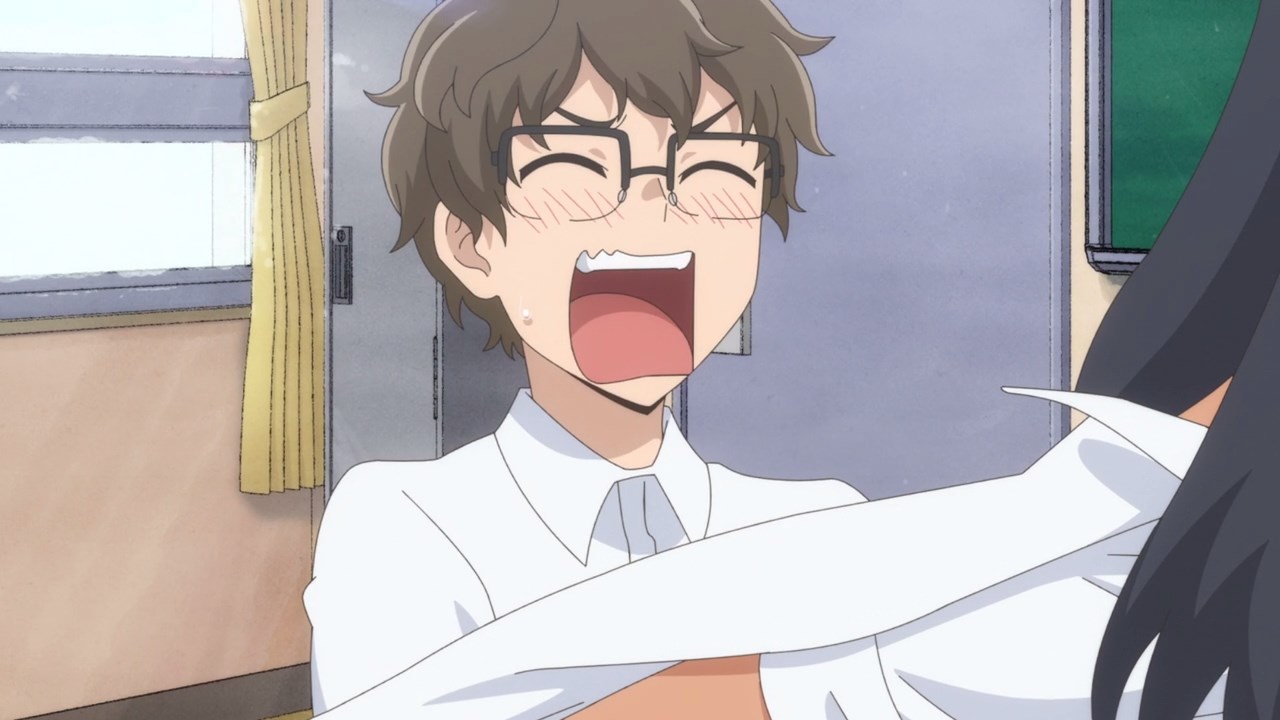 Let’s start with Hayase Nagatoro where she revealed her underwear to Mr. Nameless Sempai, although this guy is shocked that Nagatoro-san would do something dangerous. 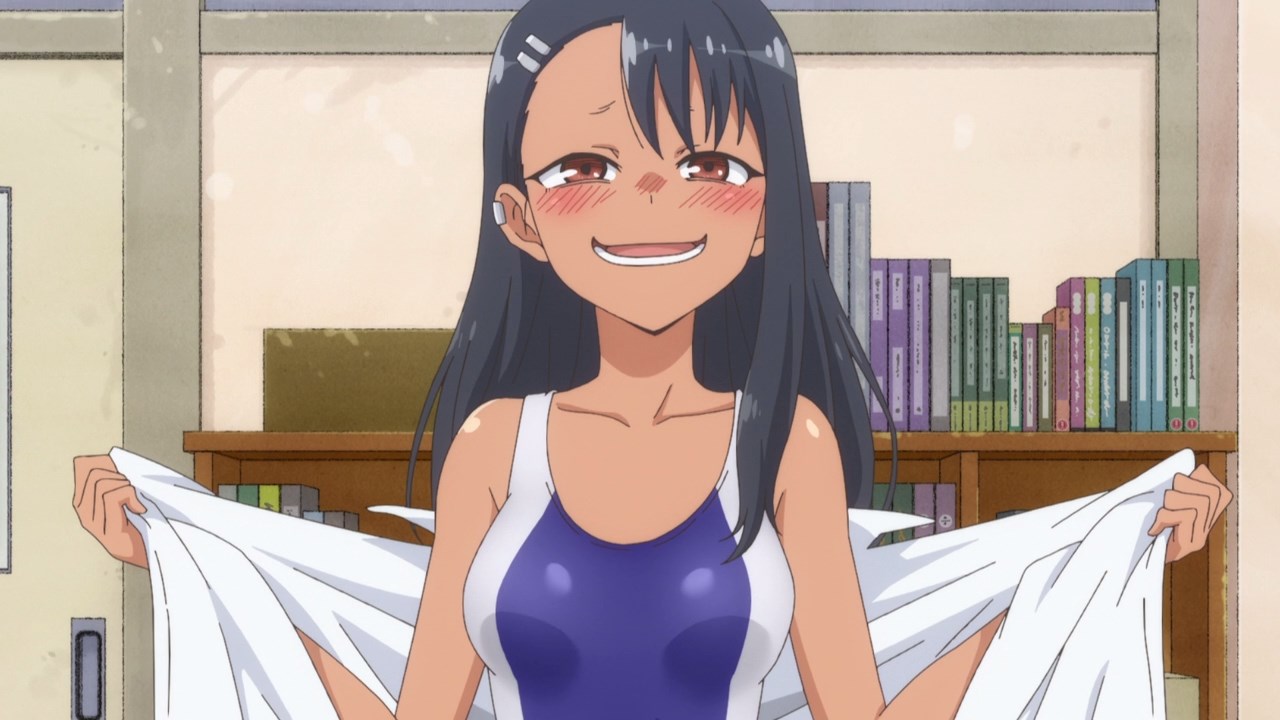 Actually, Nagatoro is wearing her swimsuit underneath her school uniform just to troll the nameless 2nd year student into thinking that she’s wearing sexy lingerie. 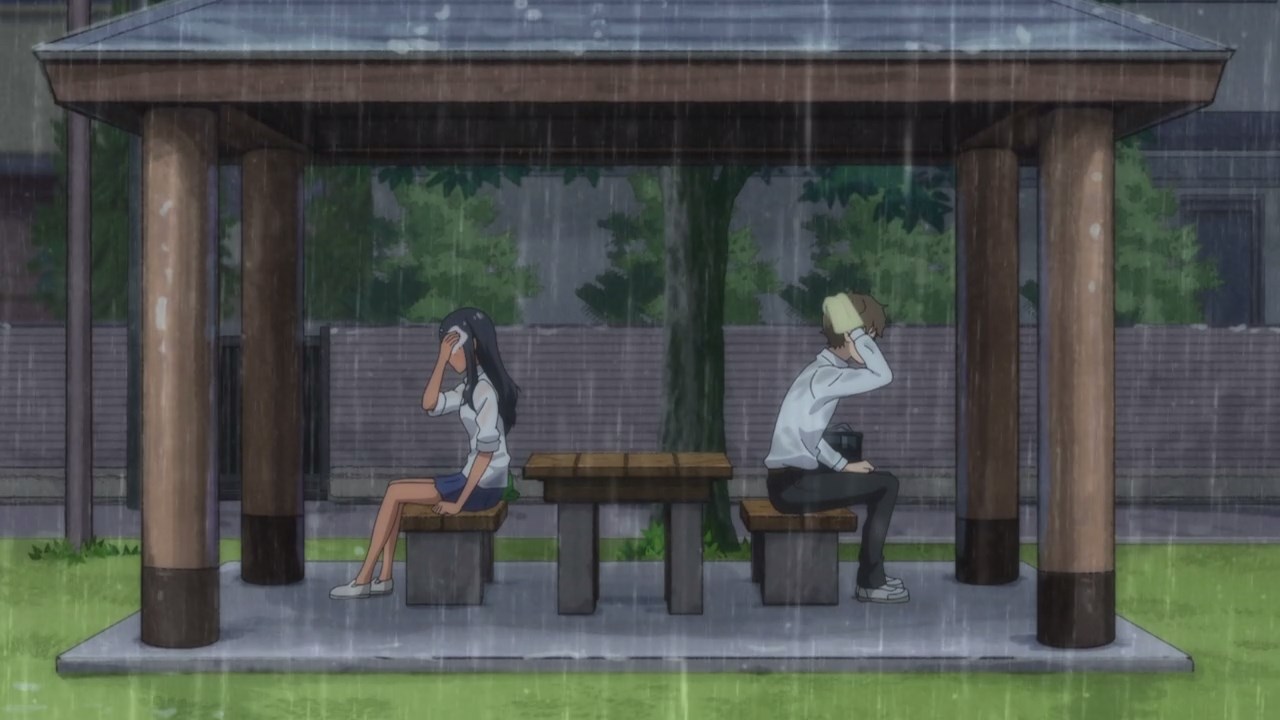 Now then, let’s move onto the next scene where Nagatoro-san and her senior are currently staying in a shed due to bad weather. I mean, it’s bad to get soaked in the rain. 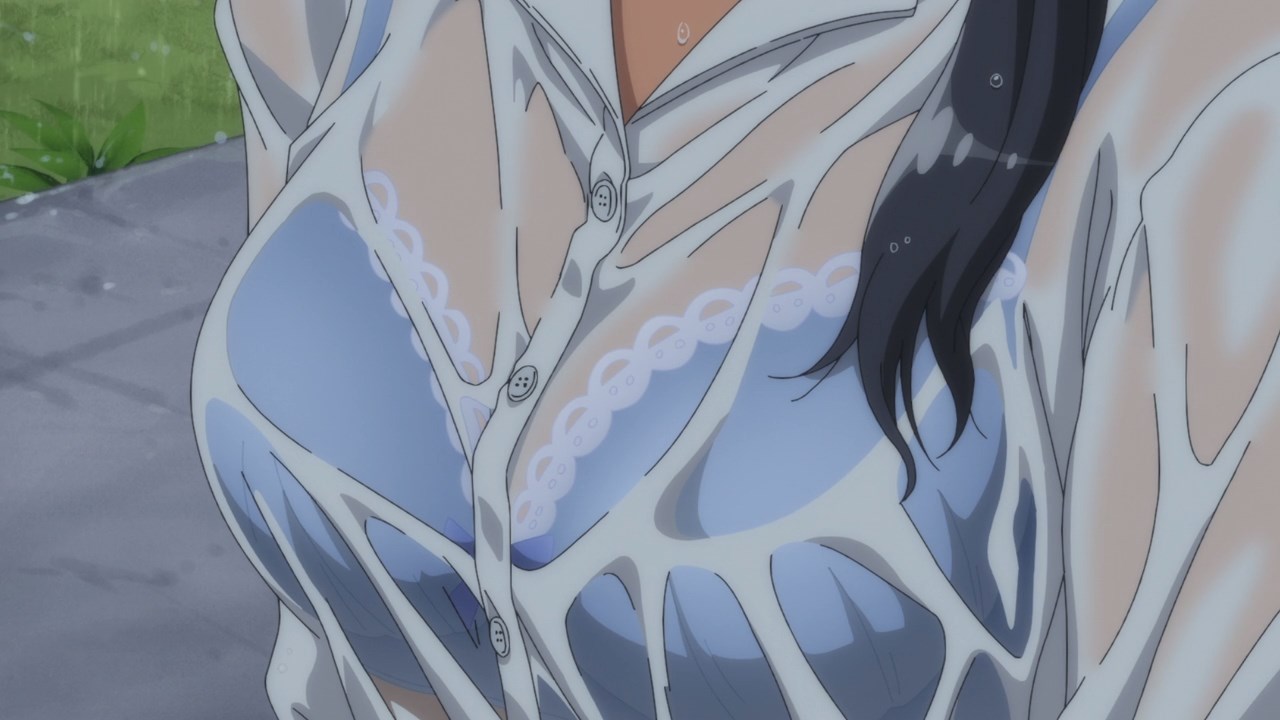 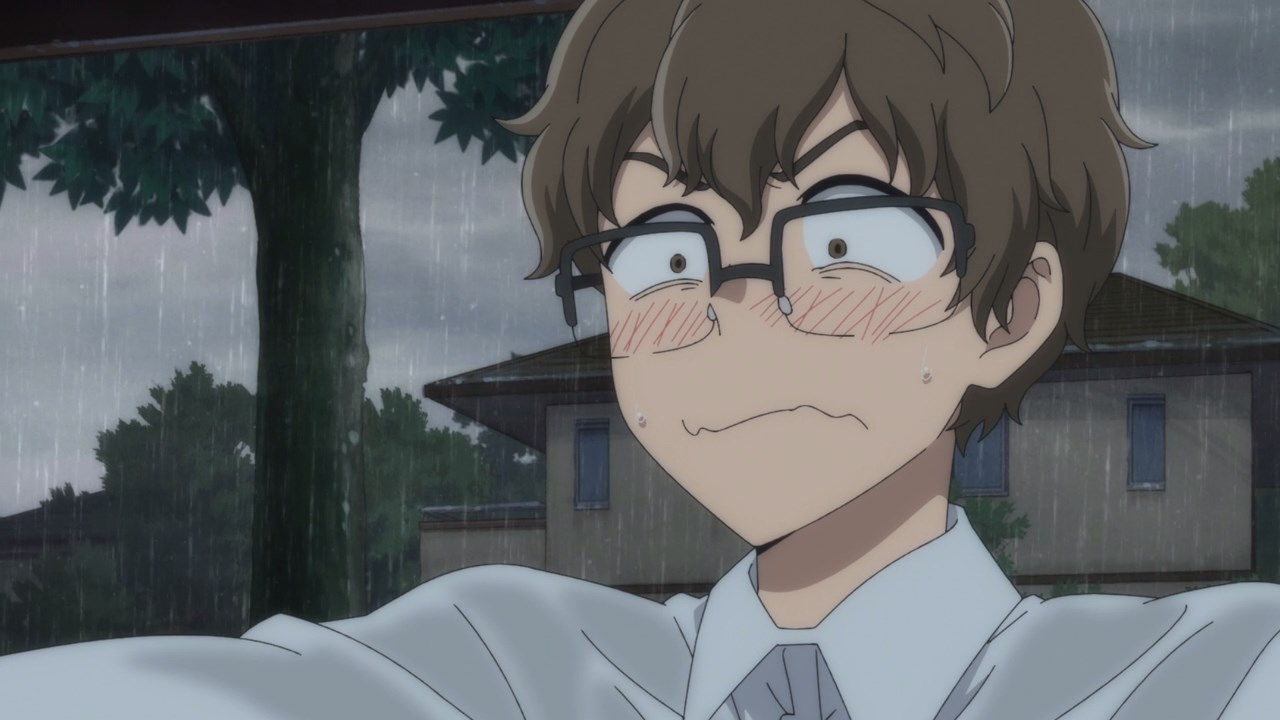 On the other hand, it looks like the male protagonist managed to get a glimpse of Nagatoro’s bra under her soaked uniform. Lucky pervert! 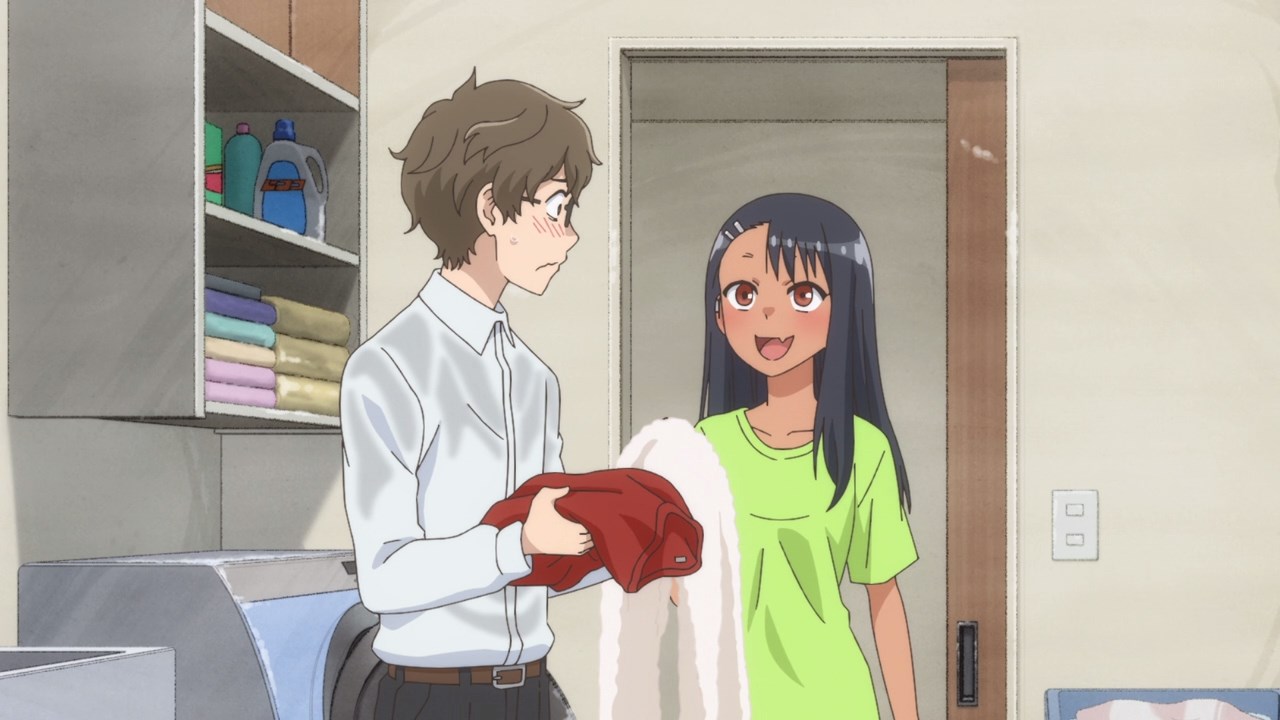 Anyways, Nagatoro-san invited her sempai to her home and give him some clothes since she can’t have Mr. Spineless getting the cold.

That’s very considerate from her but I doubt it since Nagatoro still bullies the male protagonist! 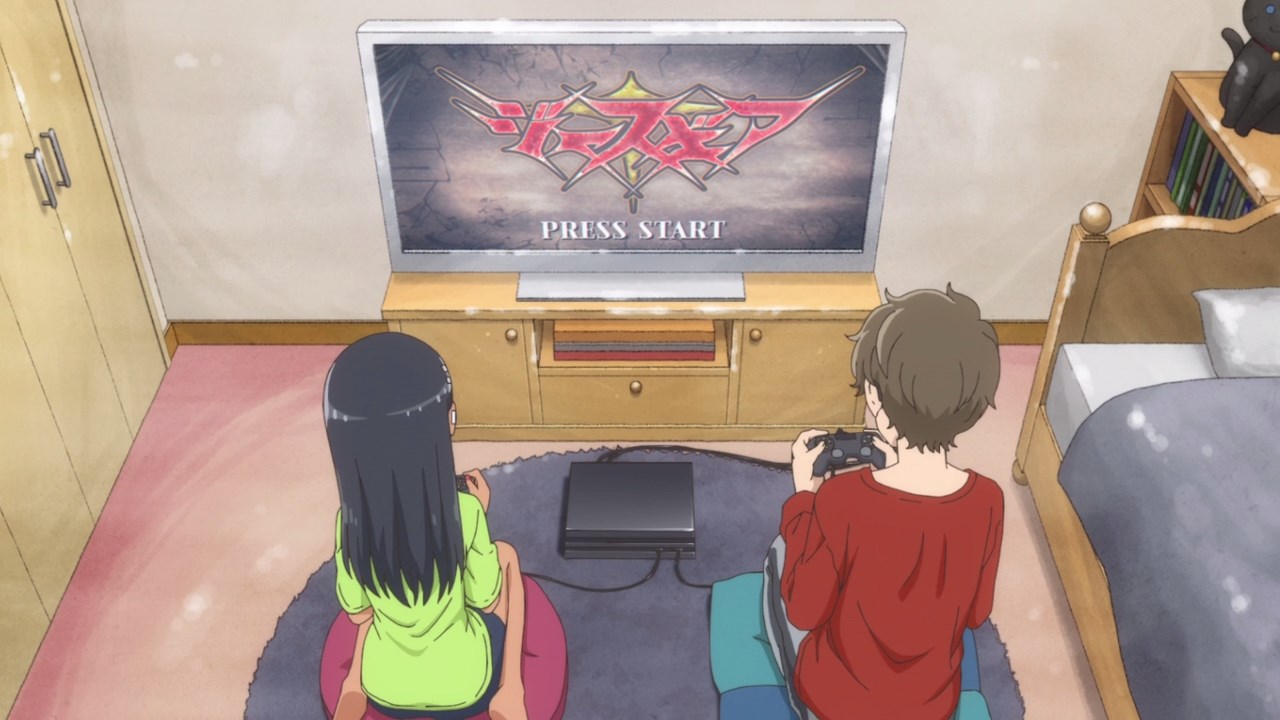 While it’s still raining outside, it’s time for them to play a fighting game named JusGear. Not sure if it’s loosely-based on Guilty Gear or it’s just a generic fighter? 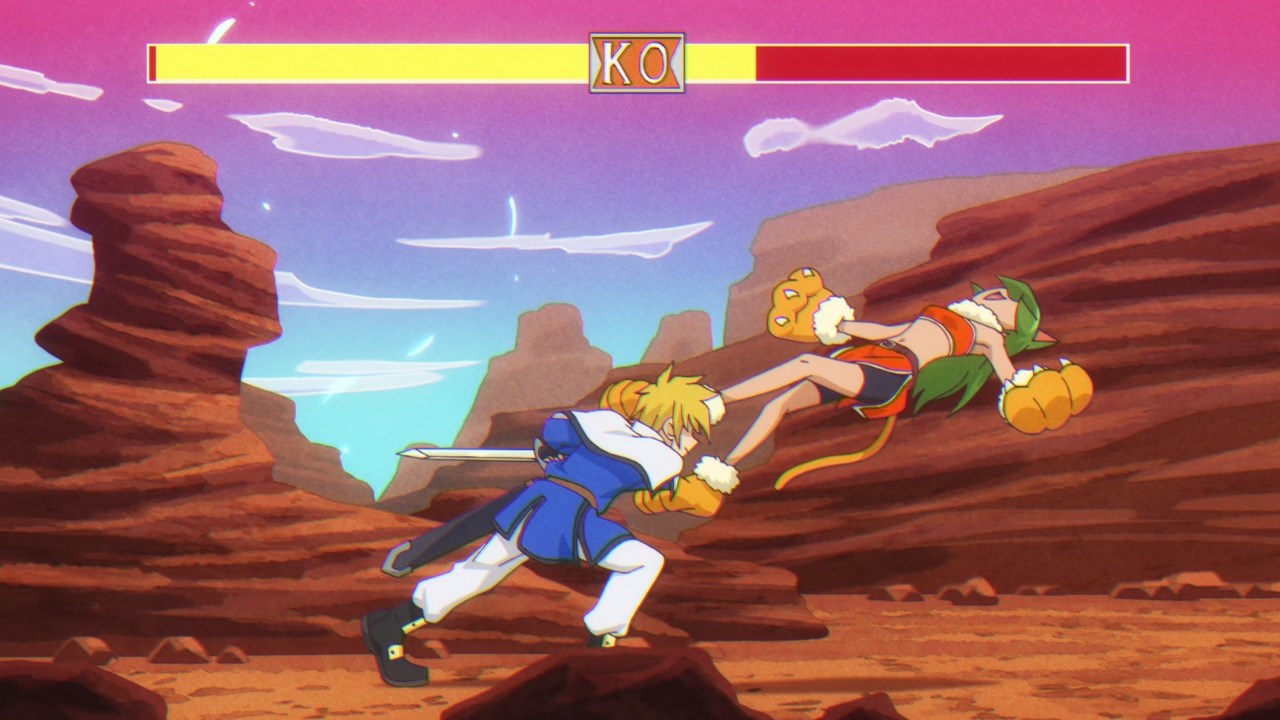 Anyways, the male protagonist plays a Ky-expy while Nagatoro plays what appears to be Felicia/Cham Cham.

Of course, he managed to beat Nagatoro-san simply because Mr. Sempai knows how to play JusGear decently compared to the cheeky girl. Looks like the male protagonist will win it. 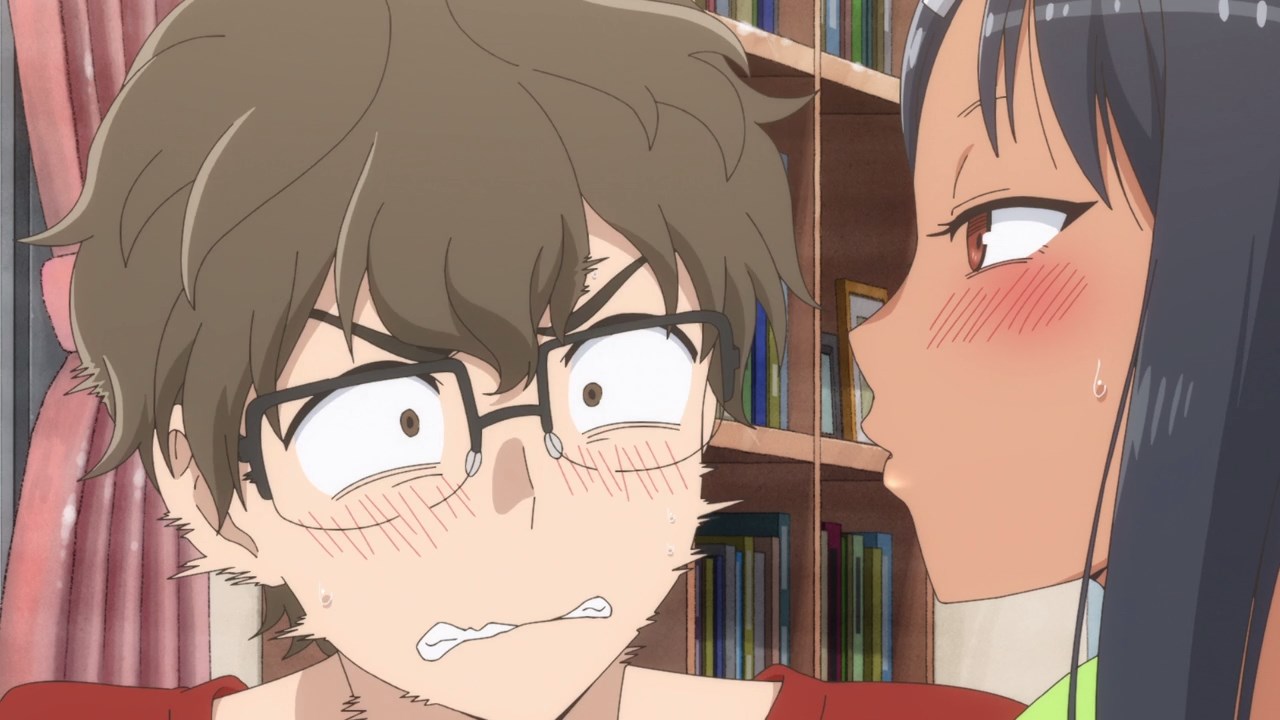 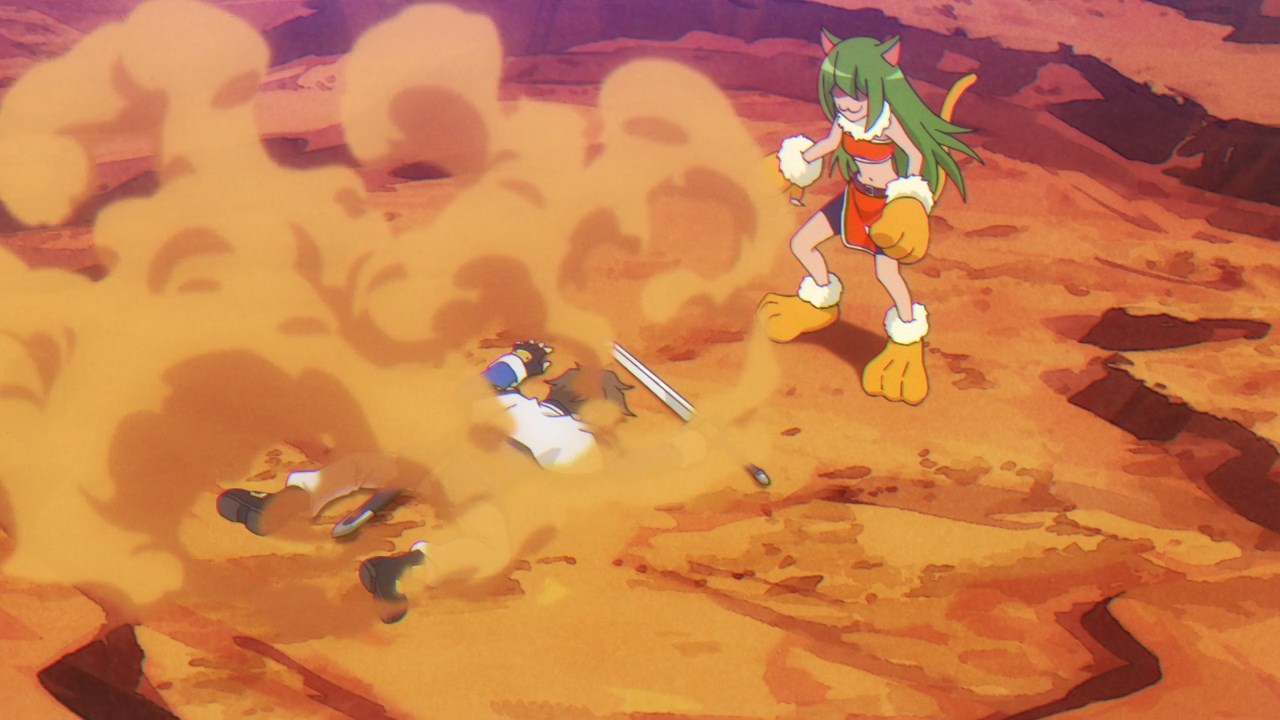 And sure enough, the nameless senior student lost his battle over Nagatoro-san. I can’t believe it. 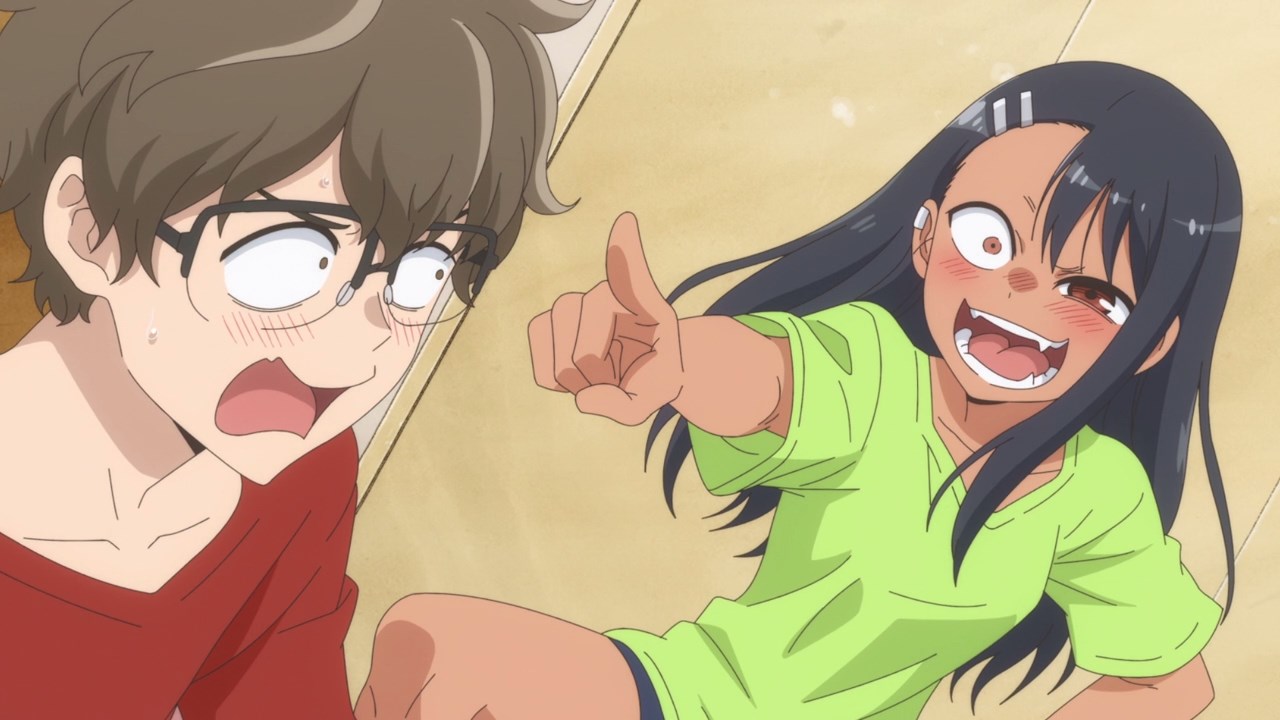 On top of that, she even mocks Mr. Sempai for being a scrub which is funny because Hayase Nagatoro is actually a scrub, it’s just that she cheated her way to victory. 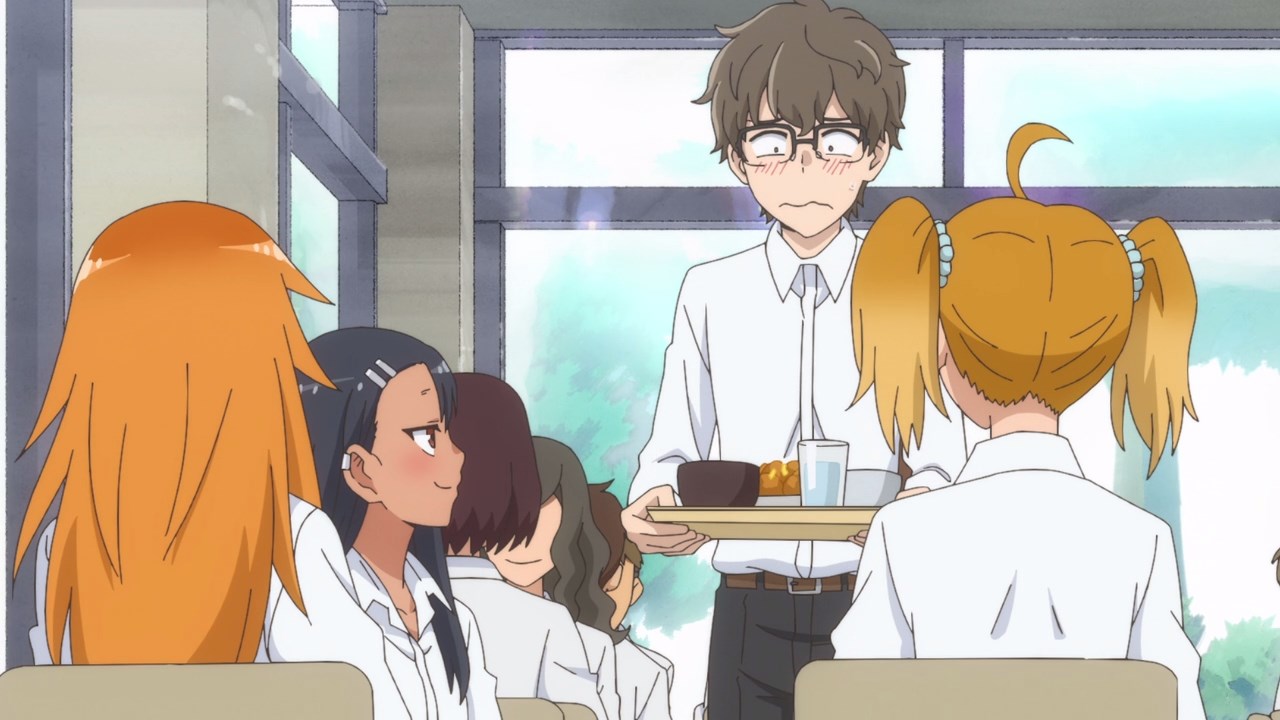 Now then, looks like Mr. Spineless will be joining Nagatoro-san during lunch break along with her buddies since all of the tables are full. 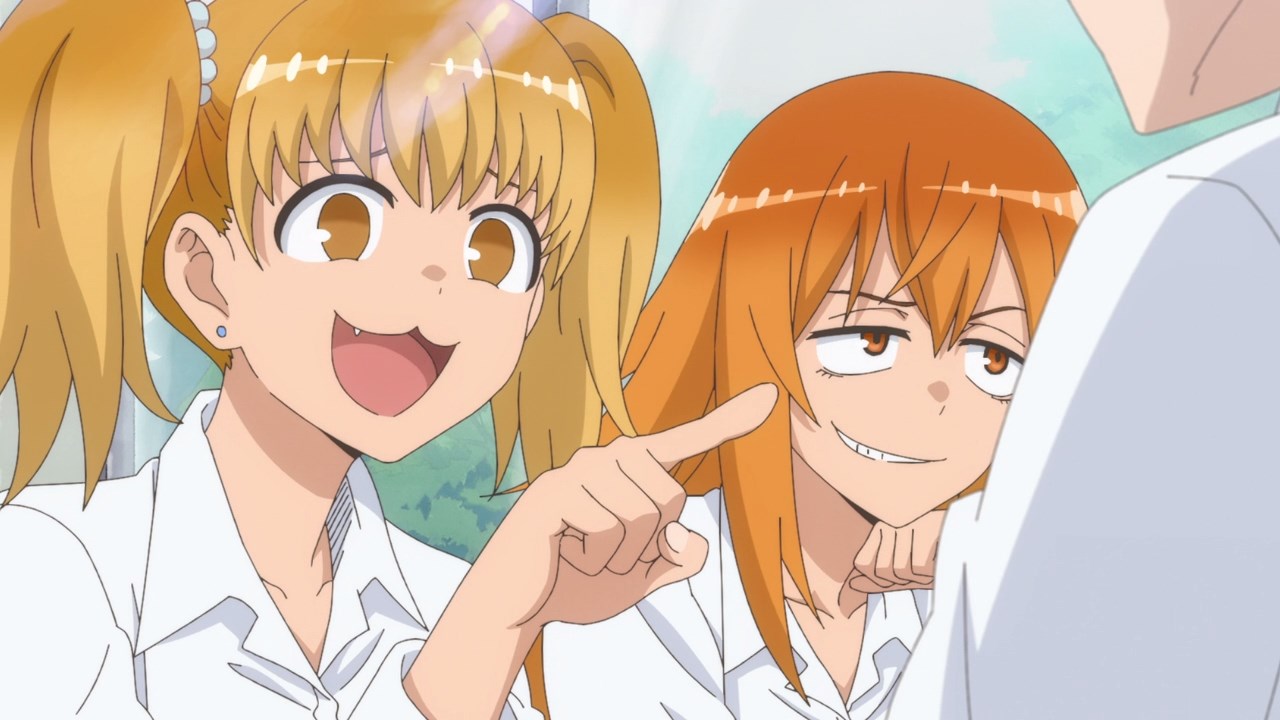 Anyways, these girls are named Yosshi and Gamo-chan and much like Nagatoro-san, they love to bully anyone and Mr. Sempai is no exception. 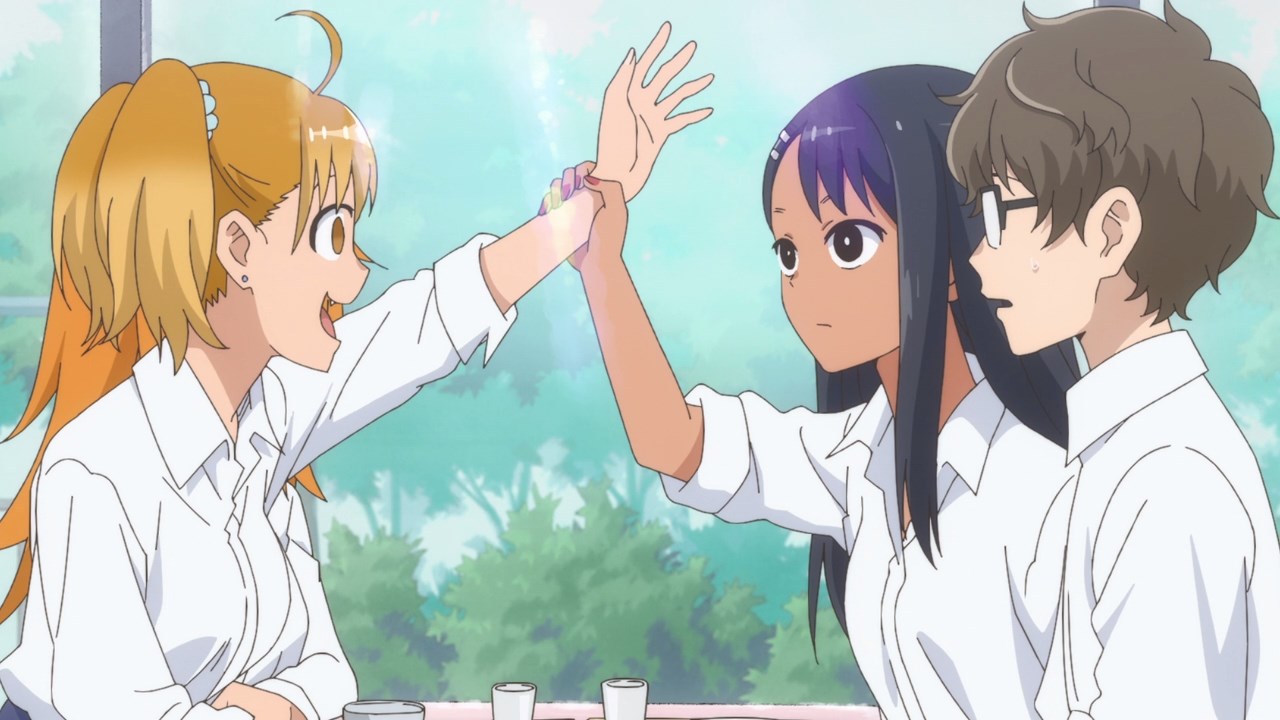 However, Nagatoro won’t let anyone bully her sempai because she’s the only one who can do that to him.

Okay Hayase Nagatoro, you sure are very protective towards the male protagonist that you have some feelings for him. Oh wait, I doubt that! 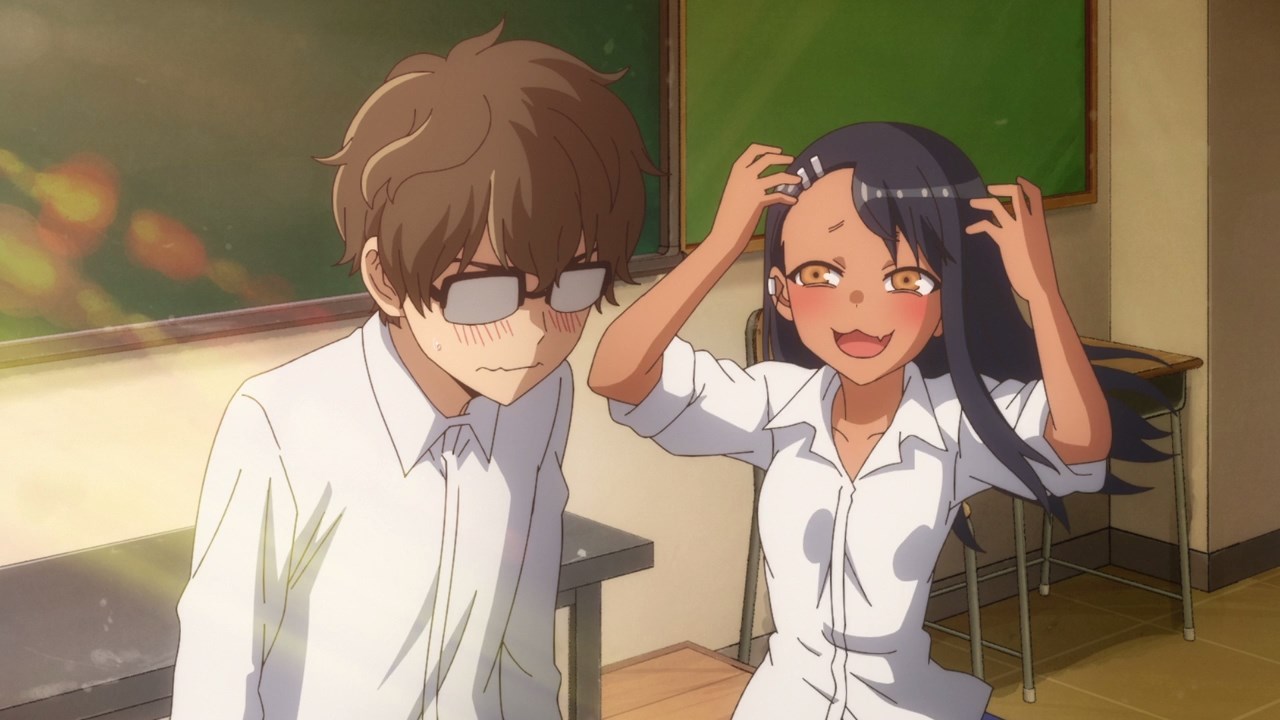 One last thing, looks like Nagatoro-san is teaching Mr. Sempai on becoming a tsukkomi since she’s acting as the boke, although she’s just mocking him. 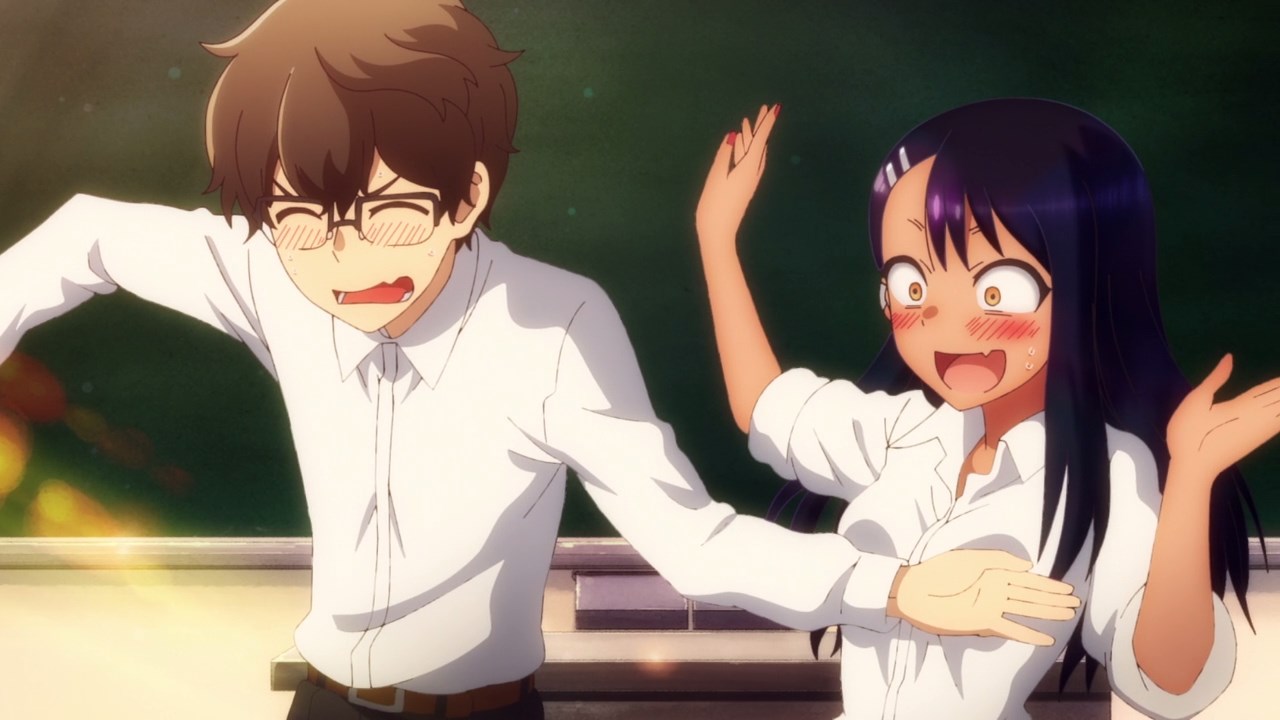 However, it looks like the nameless male protagonist botch his tsukkomi routine by slapping her tits. Okay Mr. Sempai, let us know if Nagatoro’s breasts are big!

But that’s about it for this episode and while I’m surprised that Nagatoro is very considerate towards the male protagonist, she’s still treating him as her personal chew toy. Well then, I’ll see you next time!