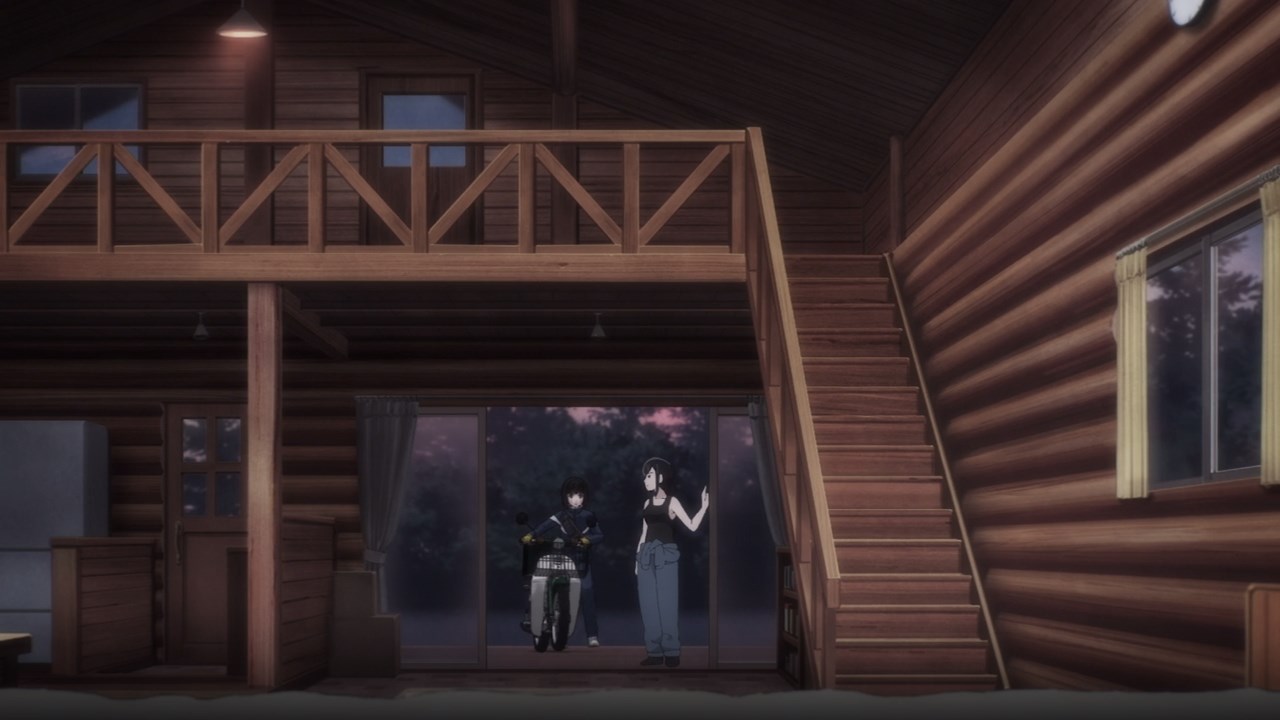 On this episode, Koguma visited Reiko’s log cabin in which she lives by herself, not to mention that her place is near Mt. Fuji. 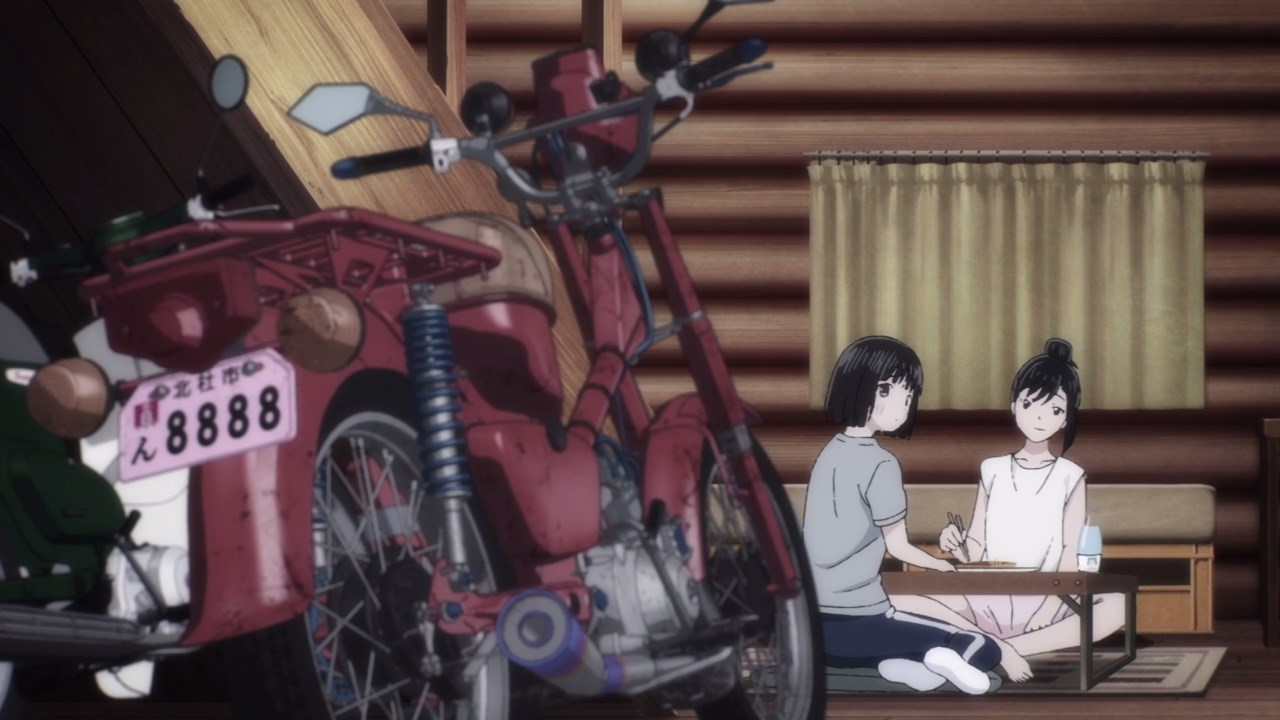 Of course, her Postal Cub got busted in which Reiko shares a story to Koguma. Really, how did Reiko wreck her bike? 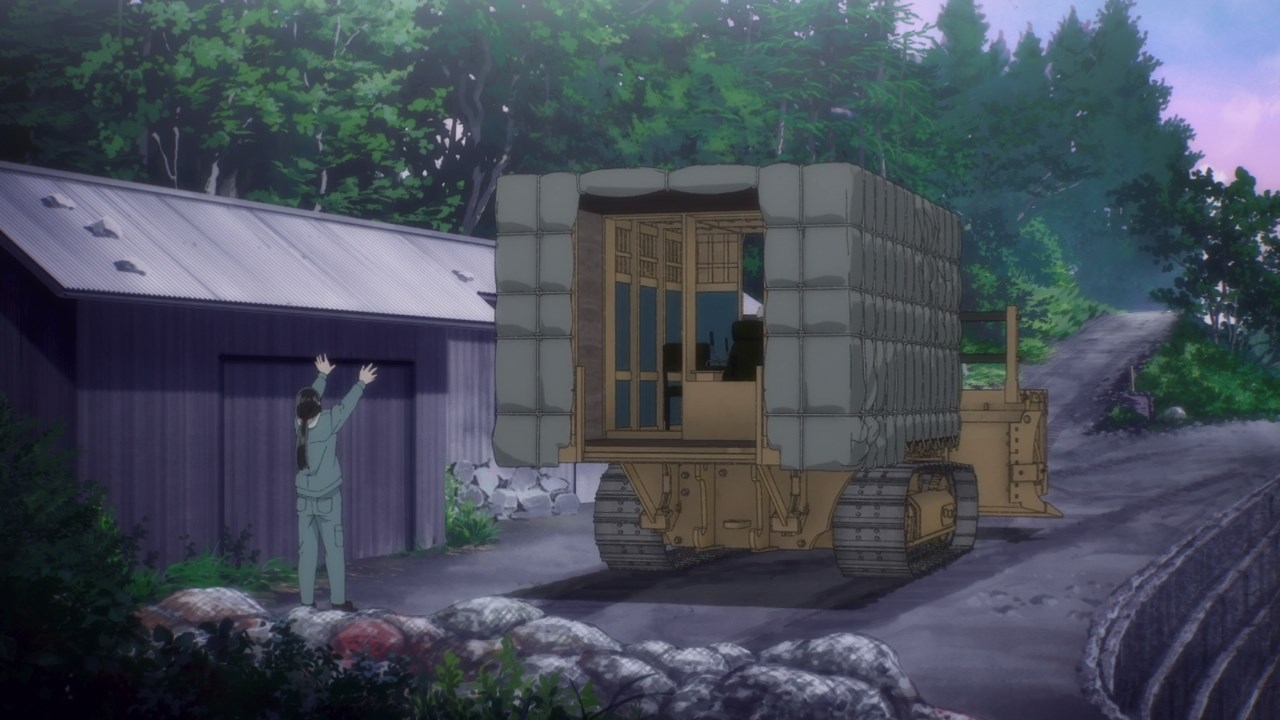 Well, turns out that it has something to do about her part-time job in which she not only guides the caterpillar truck, but Reiko carries goods to the top of the mountain. 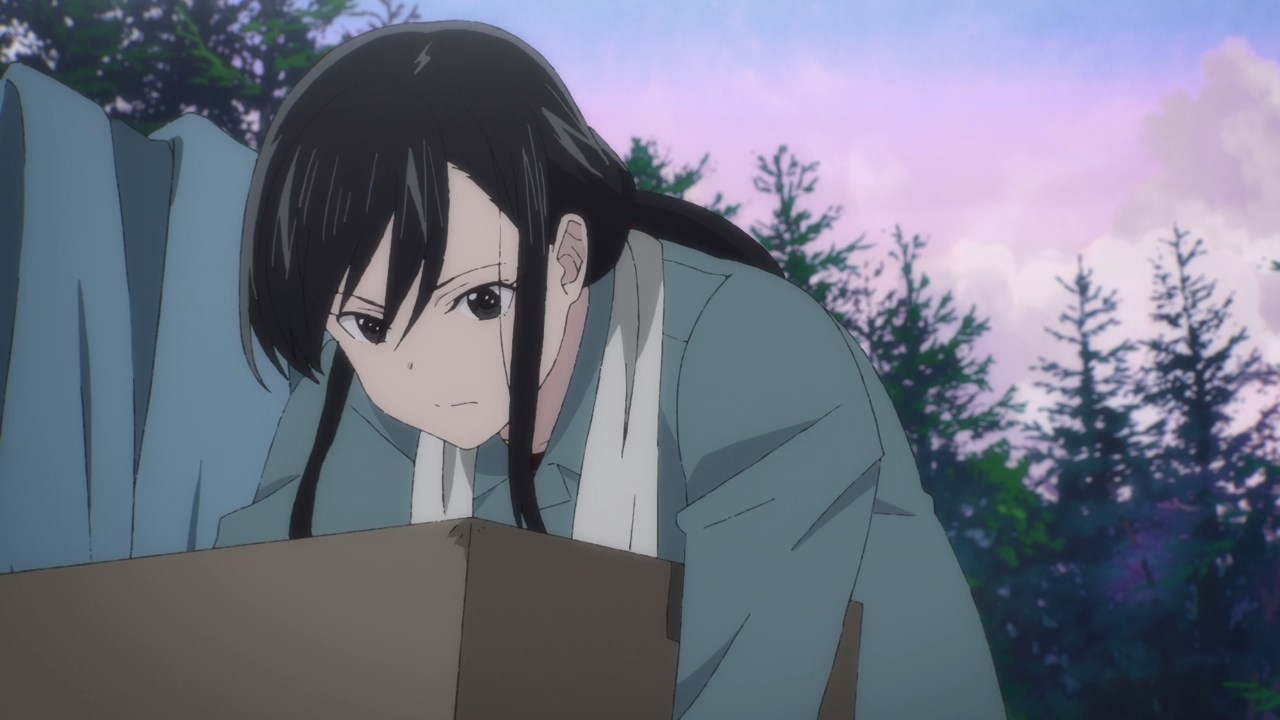 Sure that her job might break her bones if she’s not careful, but the pay is decent for Reiko. Aside from getting a decent salary, there’s another reason why she took this job. 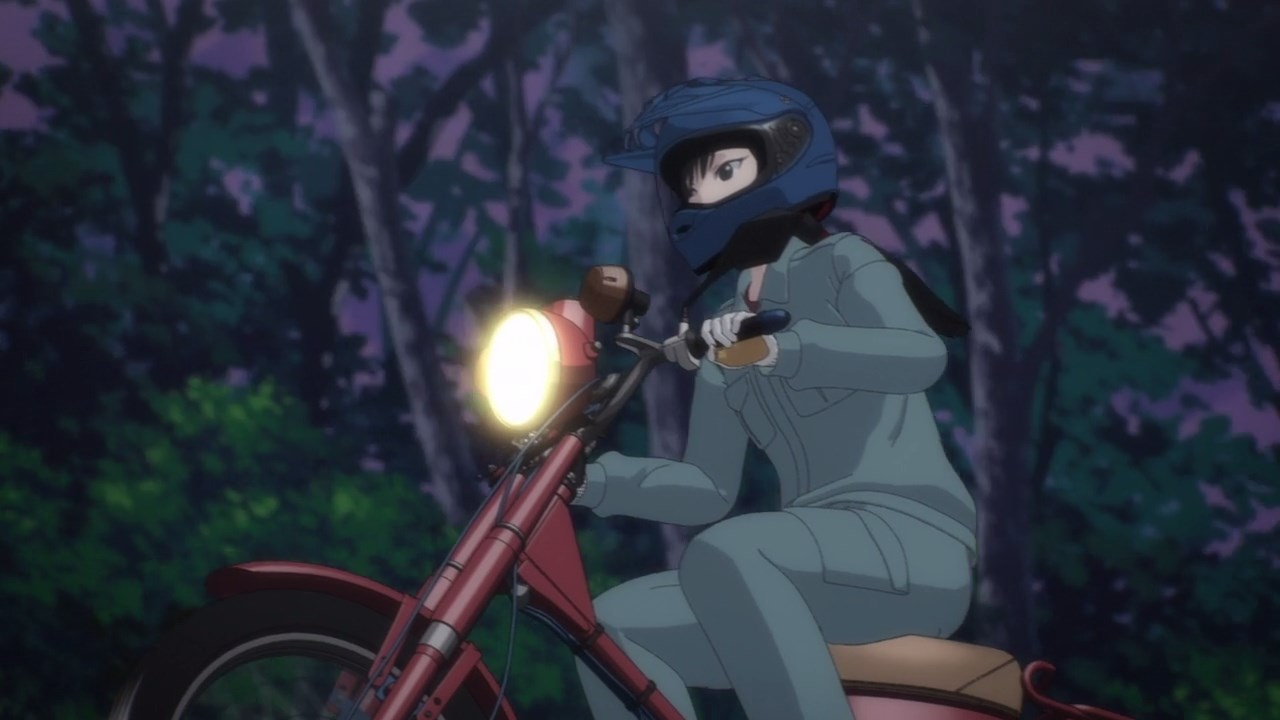 You see, Reiko wants to ride her Postal Cub to the highest summit in Mt. Fuji on the pretense that she’s checking the trail to see if the caterpillar vehicle is safe to drive.

Of course, the only thing that worries me is that her diminutive bike might not make it to the top. 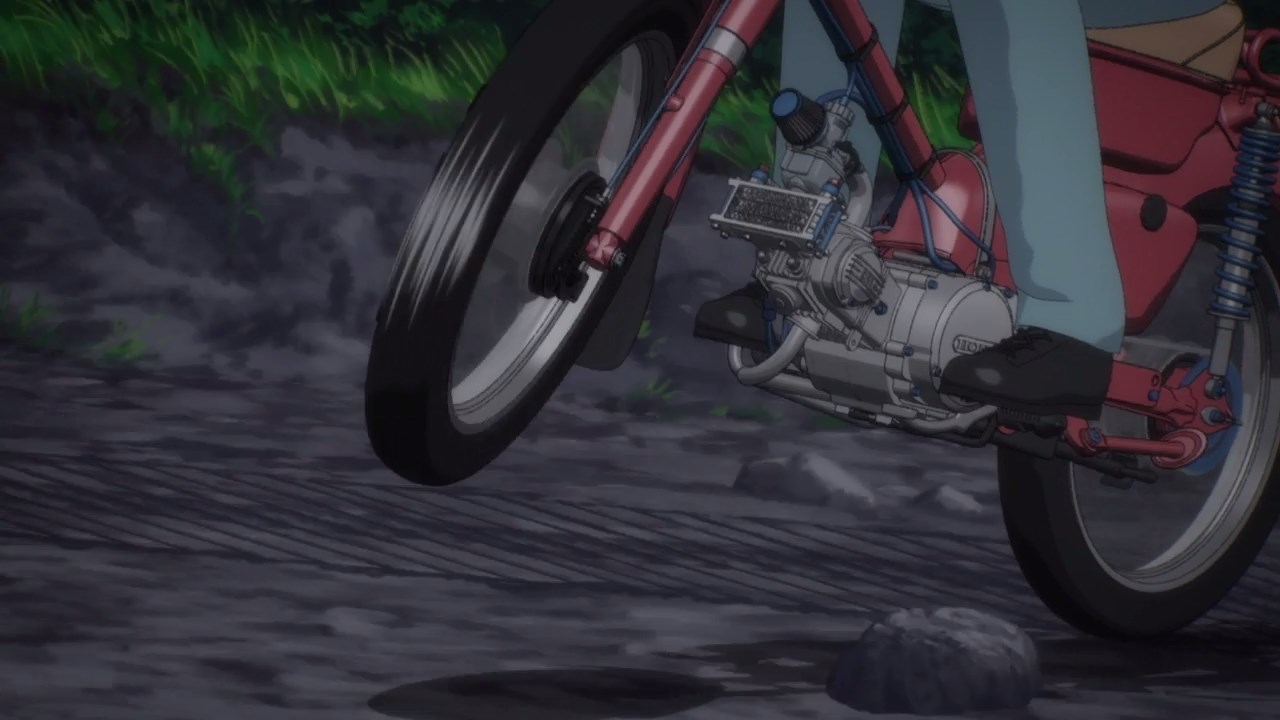 But it gets worse when Reiko hit a small rock in which her Postal Cub went flying and crashed. What a nasty wipeout. 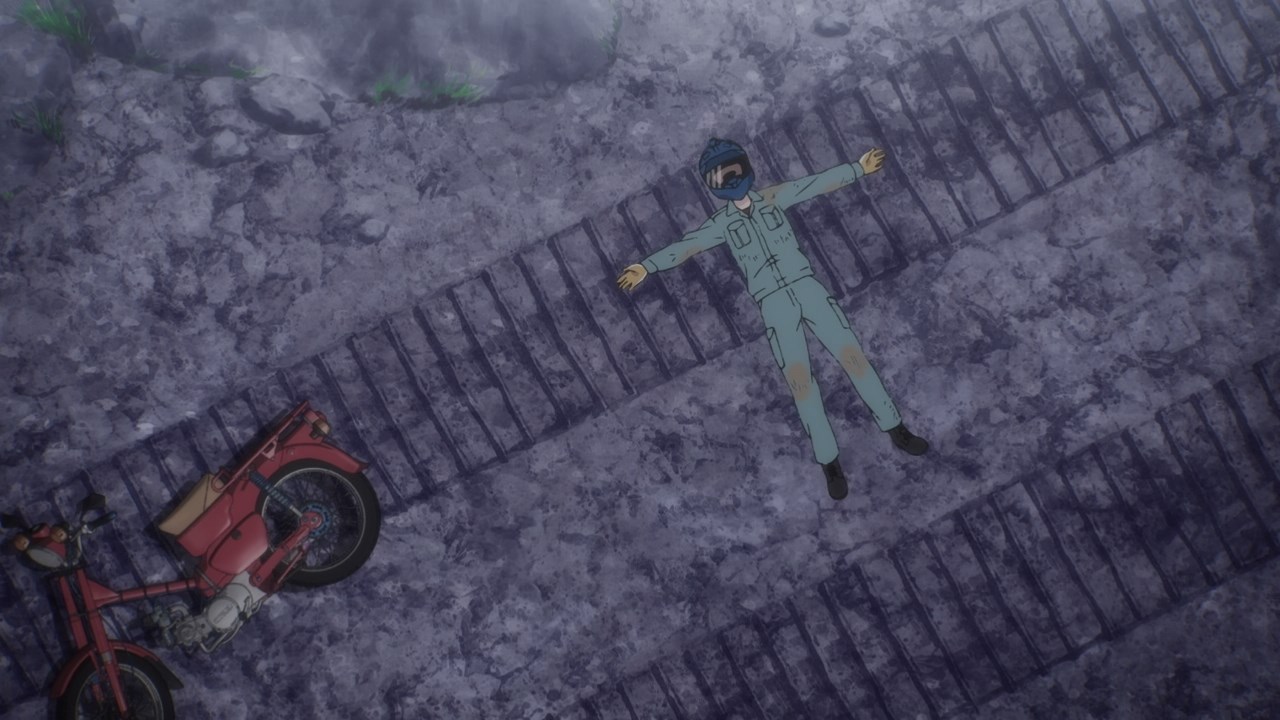 Regardless, Reiko continues to ride along the trail. However, I think she should worry about her safety as she might take a nasty fall or ran out of oxygen as she climbs higher. 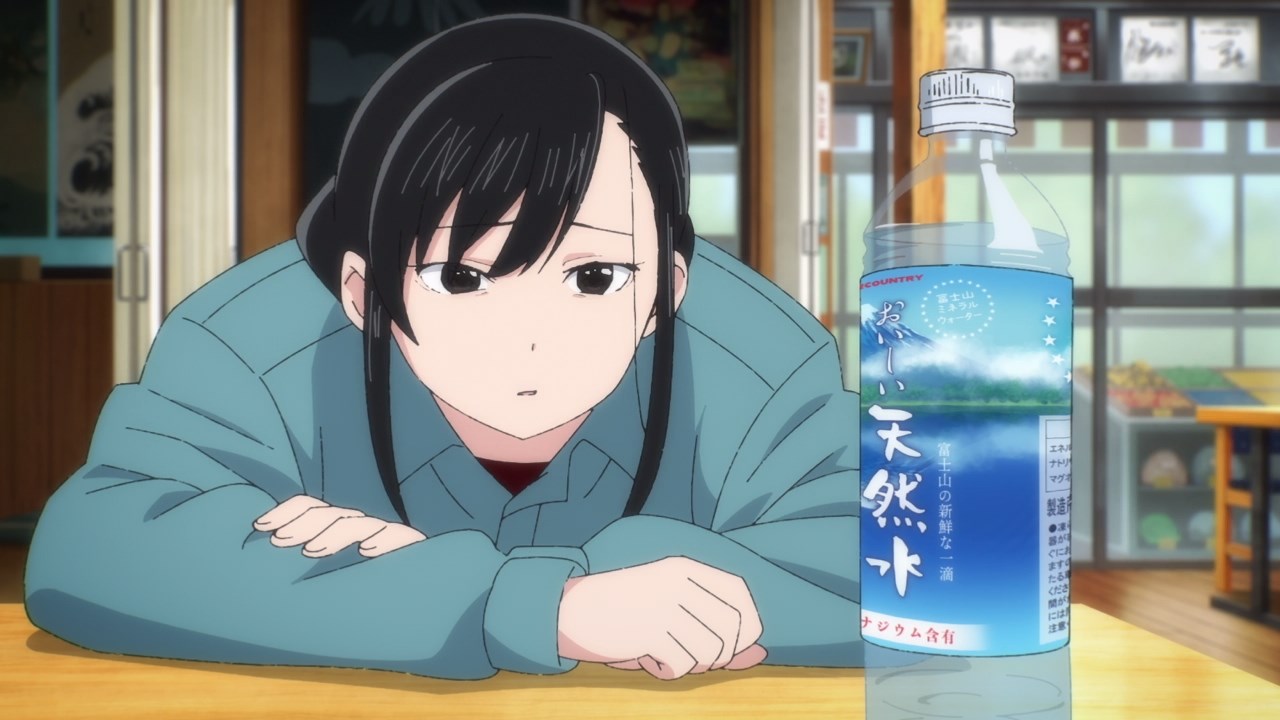 But here’s Reiko where she got a bottle of water from her boss as he doesn’t like his part-time employee suffering altitude sickness. 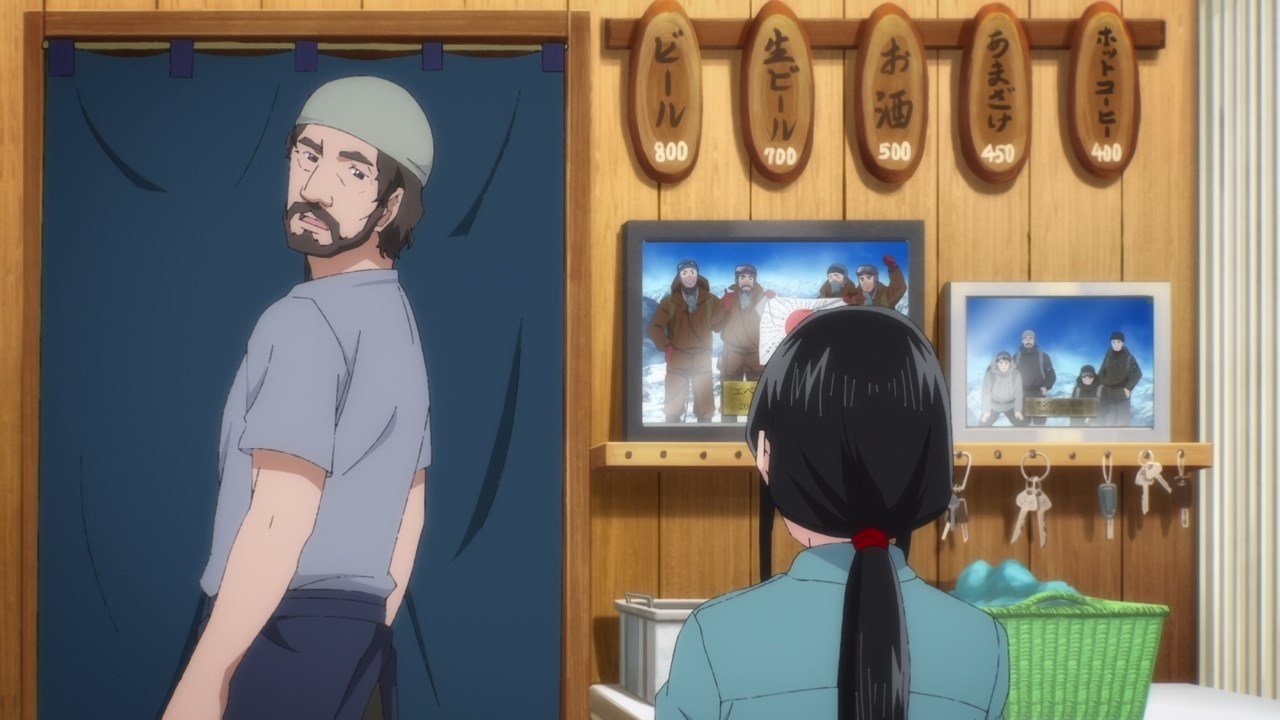 And speaking of his boss, he told Reiko that she must bring herself when riding towards the mountain.

What this means is that she can’t rely on her Postal Cub to climb the mountain as Reiko must overcome her weakness and power her way to the top. 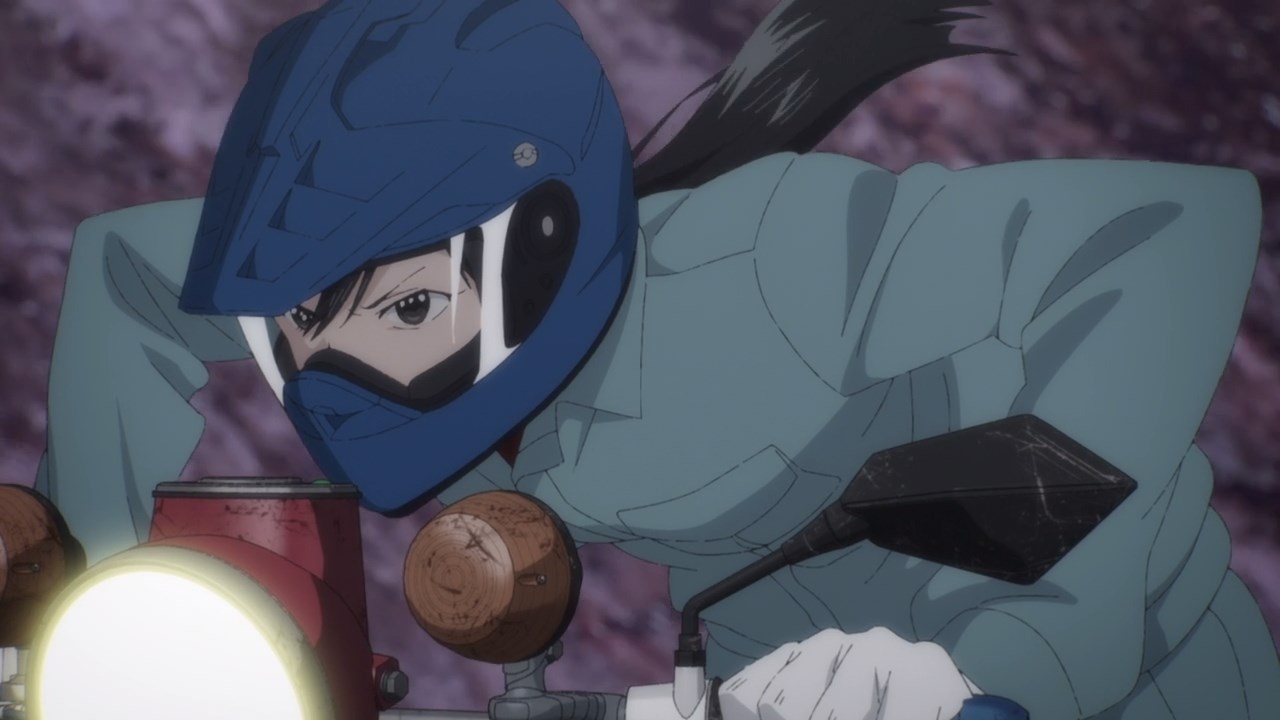 Anyways, here’s Reiko once again where she’s riding towards the top of the mountain. So far, she’s getting a bit closer to the summit. 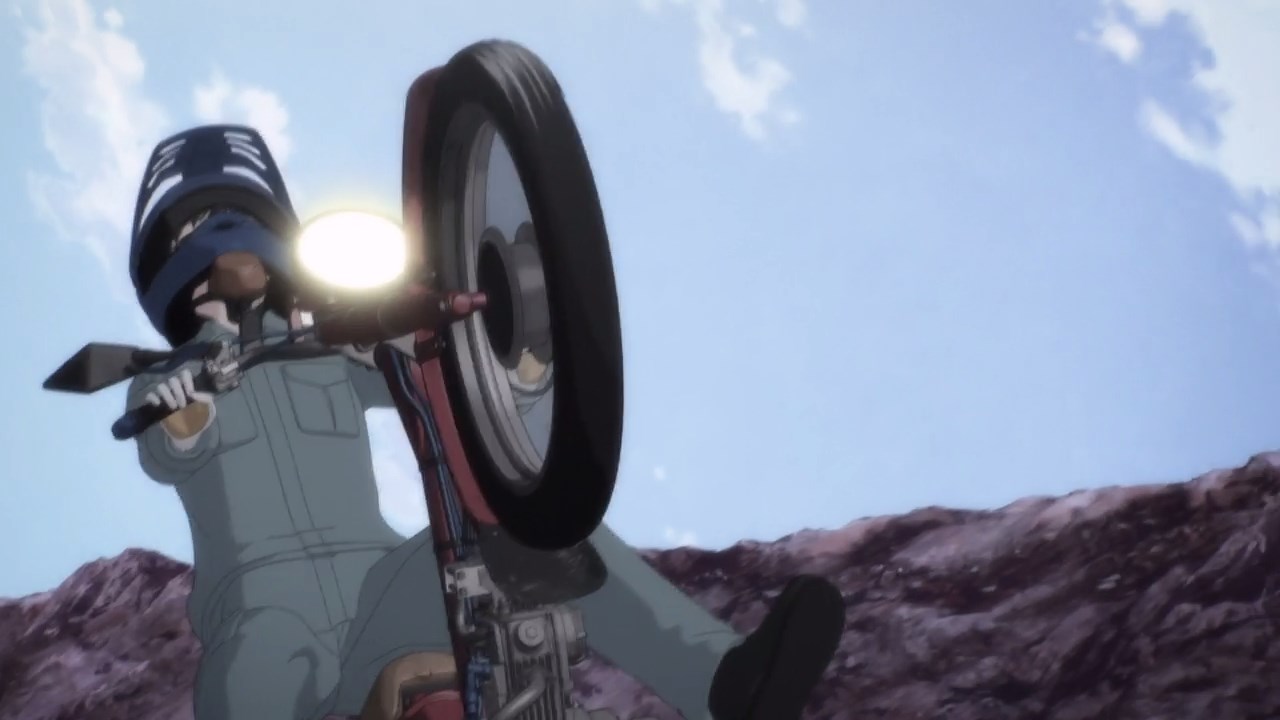 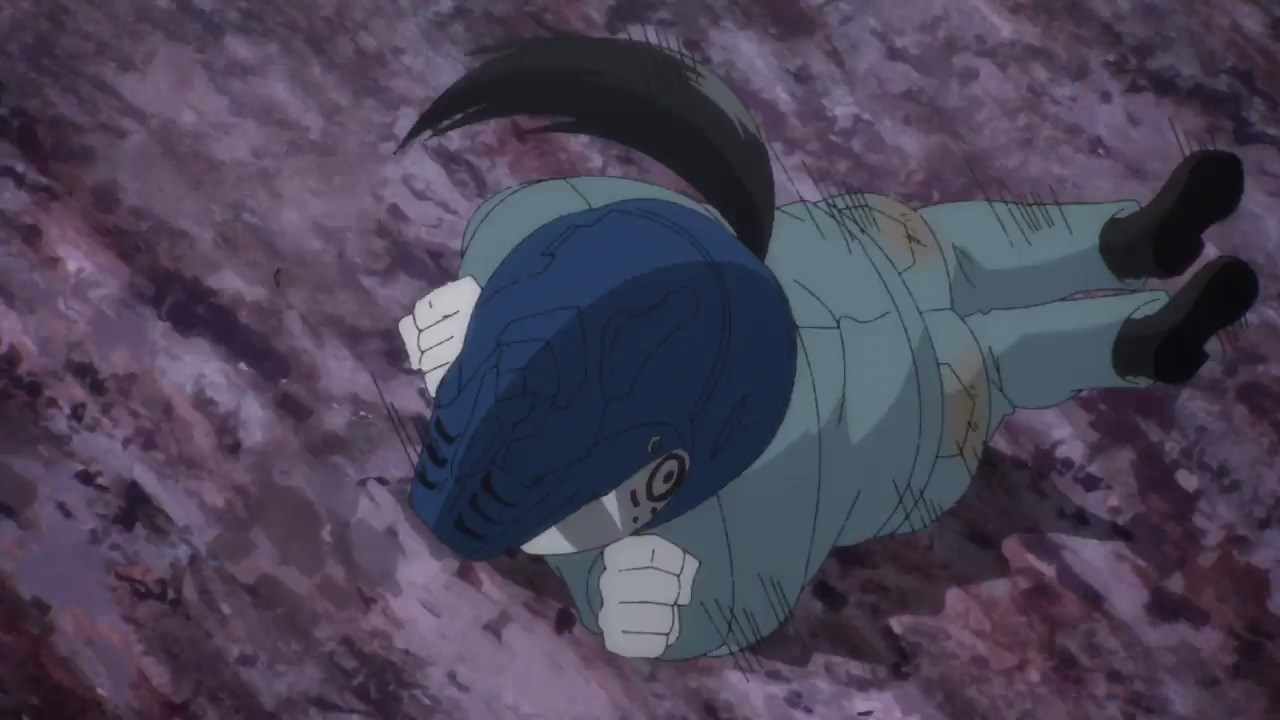 Unfortunately, she hit one of the rocks which sends Reiko tumbling down. Good thing that she’s still alive. 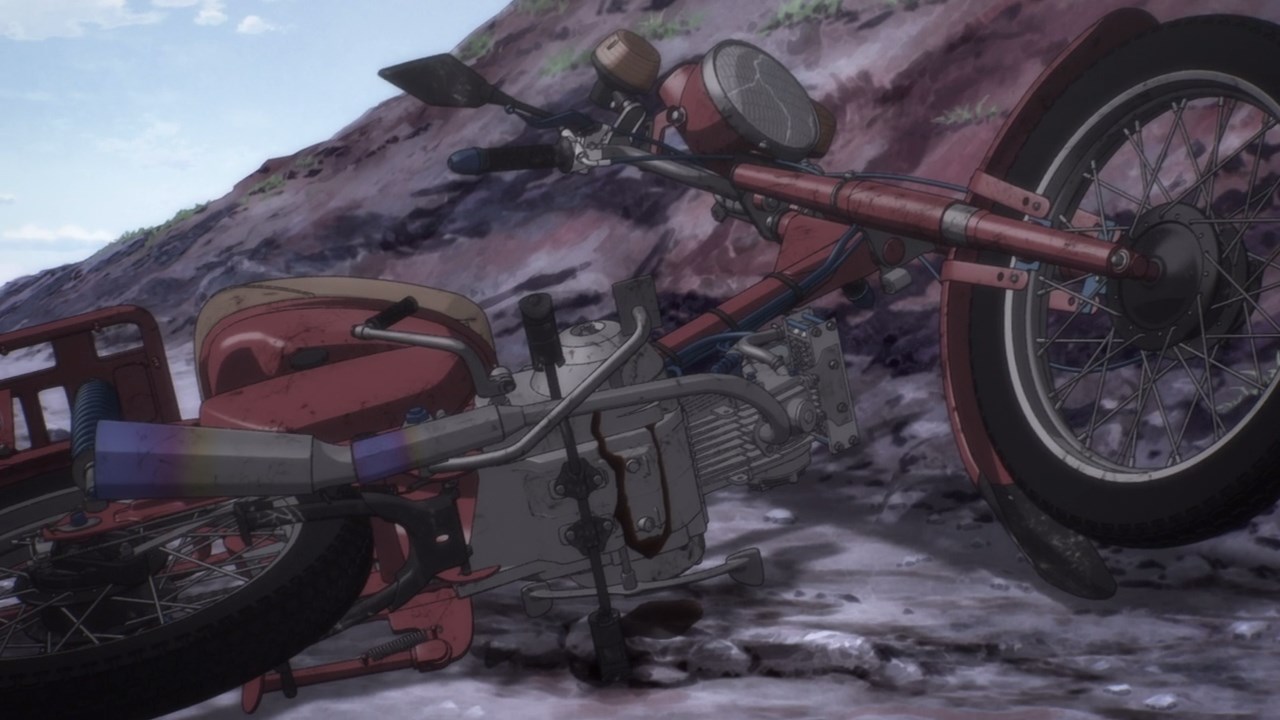 As for her bike, it’s completely broken that Reiko will have to spend her money fixing it. Then again, I think she’ll buy a Hunter Cub which is suitable for off-road.

But that’s the end of her story where Reiko has no regrets on pushing her Postal Cub to its limits. 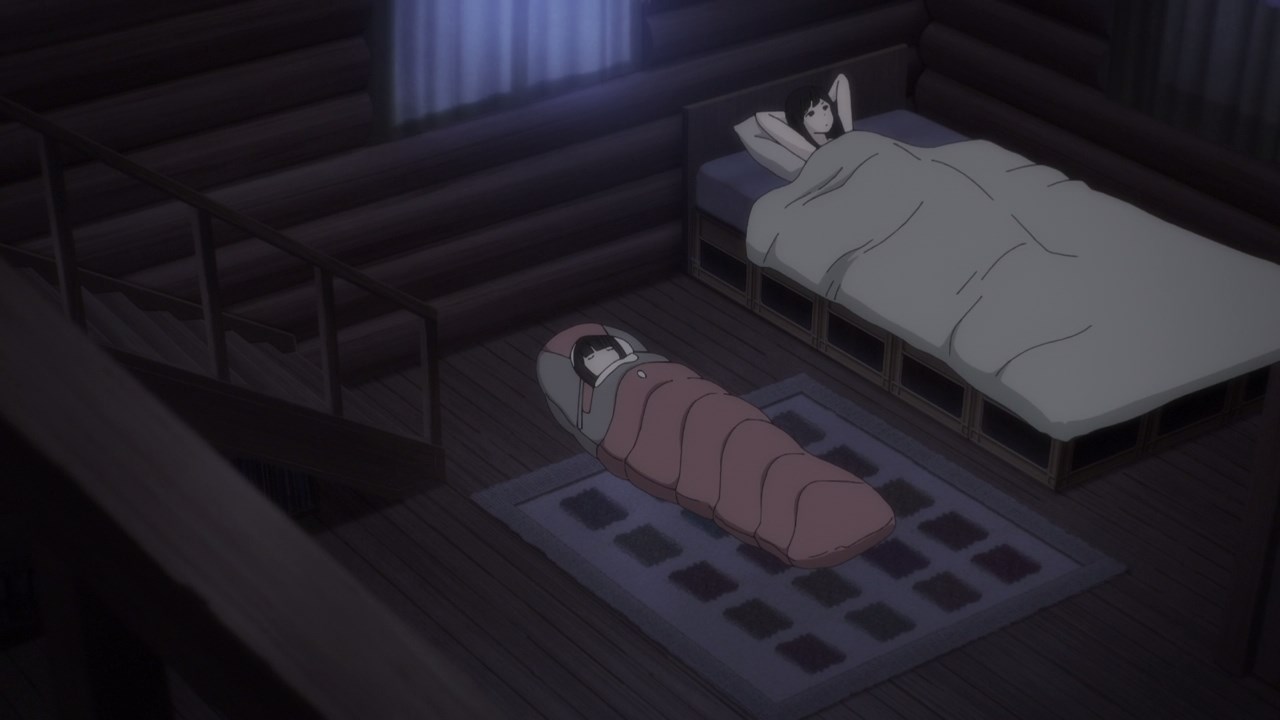 And now, it’s time for these two girls to hit the bed, although I have to say that Koguma looks cute when she sleeps in a sleeping bag. 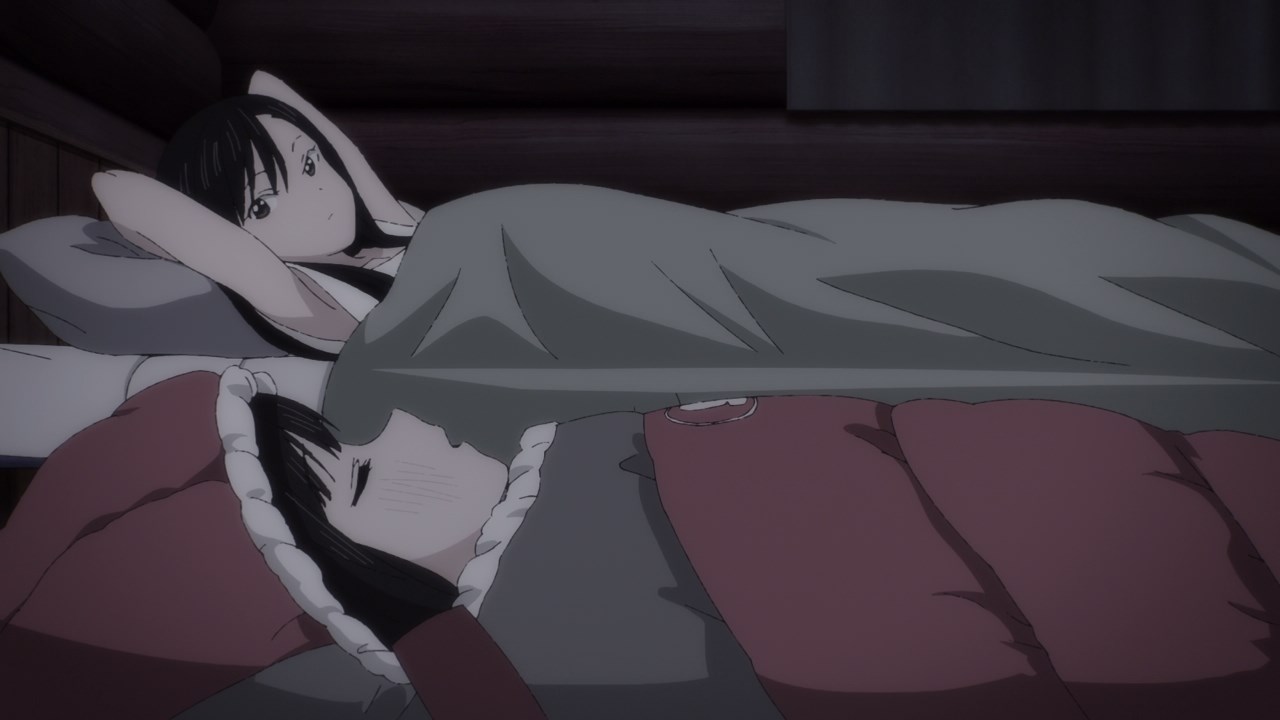 Still, I wonder what will be Koguma’s next plan as she got some cash to spend from her part-time job? Could it be that she’ll go on a road trip together with Reiko?

Well then, I’ll find out next time but for now, it’s time for these girls to get some good night sleep!