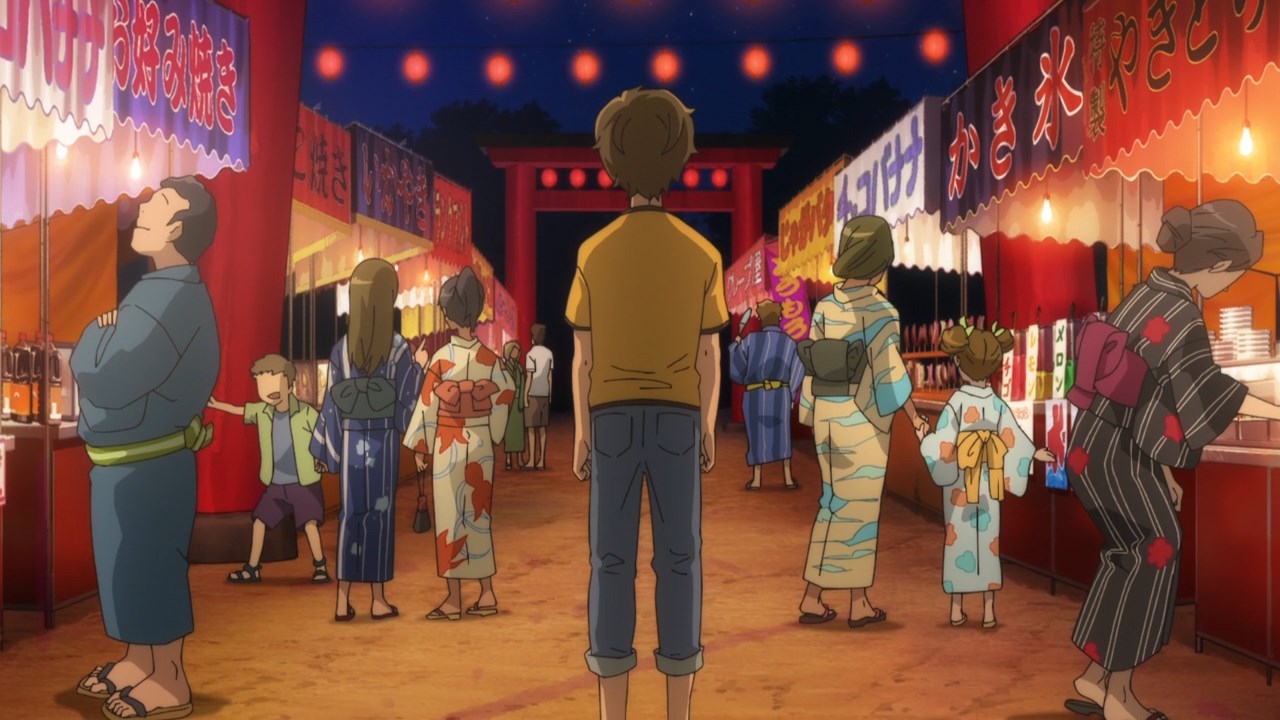 Let’s start with Mr. Lonely Sempai where he went to the festival on his own. It’s not like he expects Nagatoro to come here since she’s busy with her club activities. 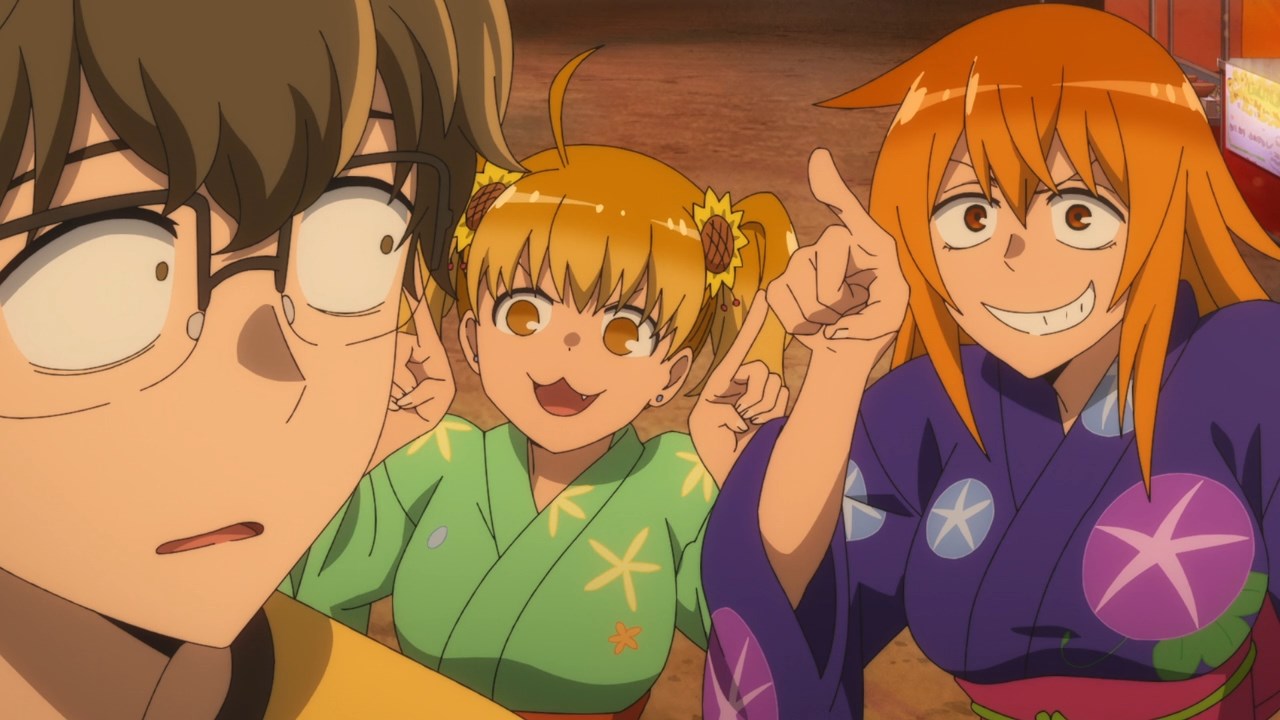 However, there’s Yosshi and Gamo-chan where they’re here to toy him. Nothing is gonna stop these two gyarus now that Hayase Nagatoro is nowhere to be found. 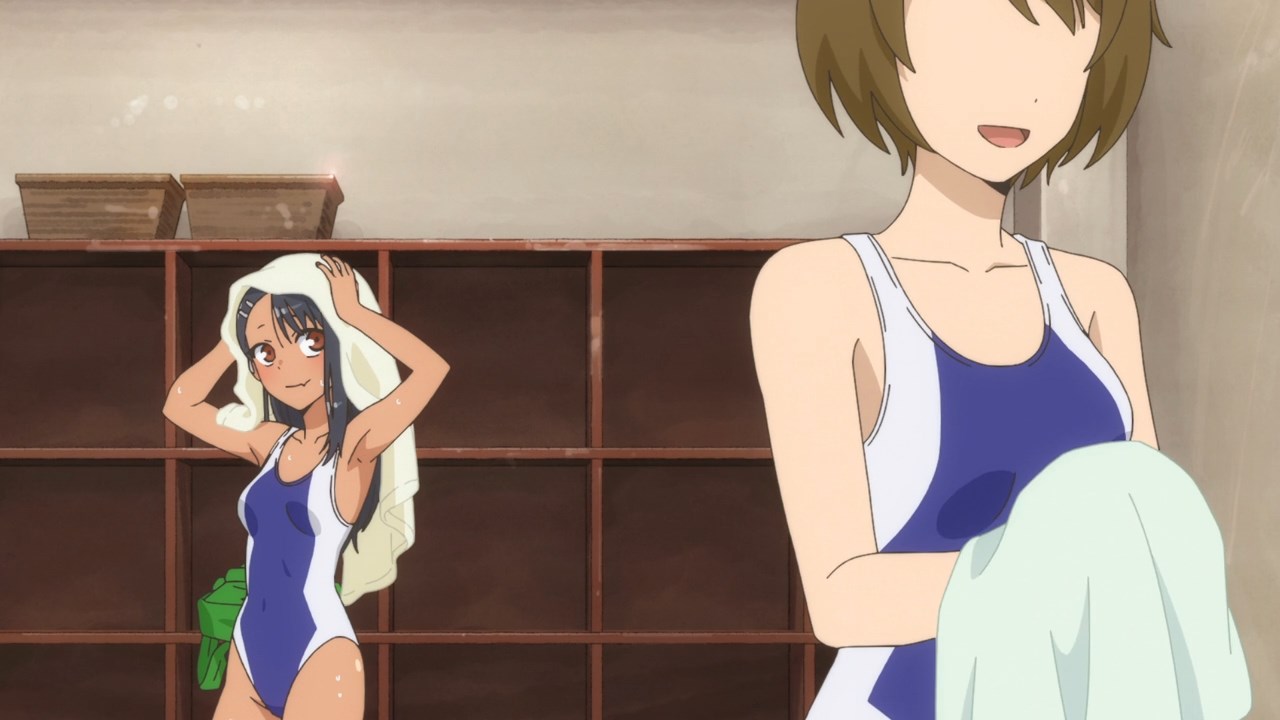 But speaking of Hayase Nagatoro, she’s just finished her club activities as Nagatoro is planning to go to the festival. Then again, I’m not sure if the festival is already over since it’s really dark outside. 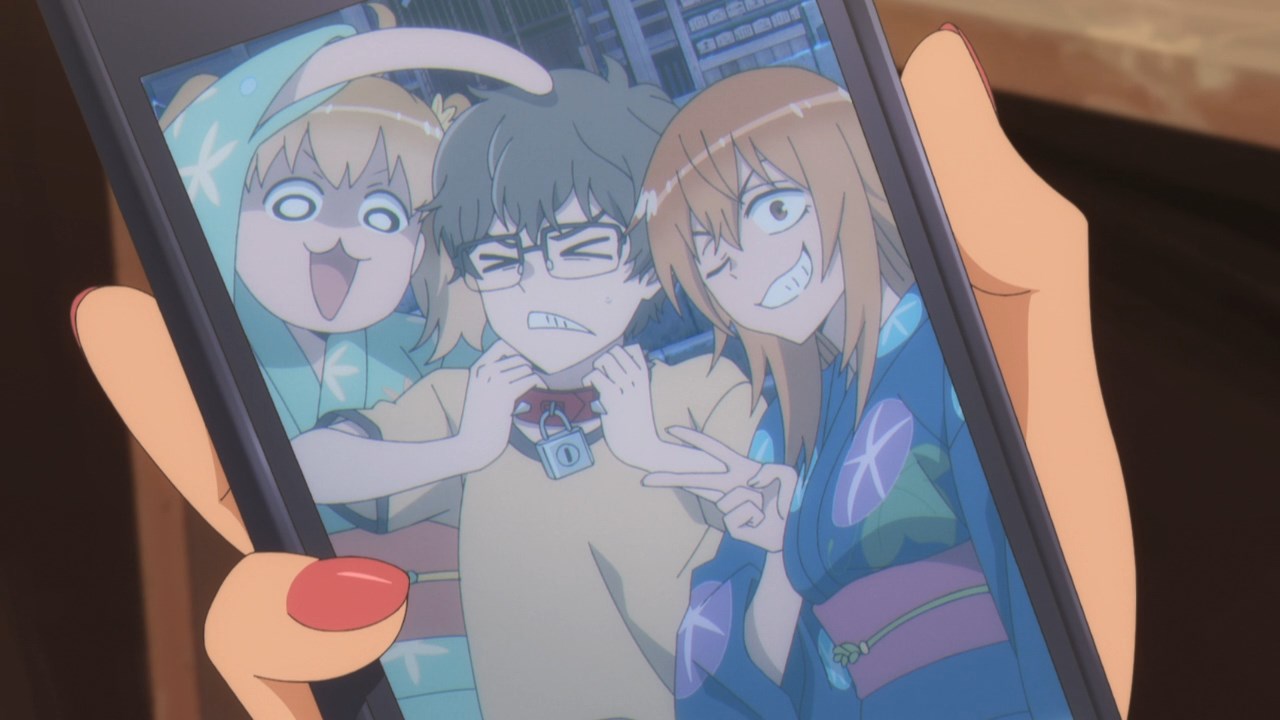 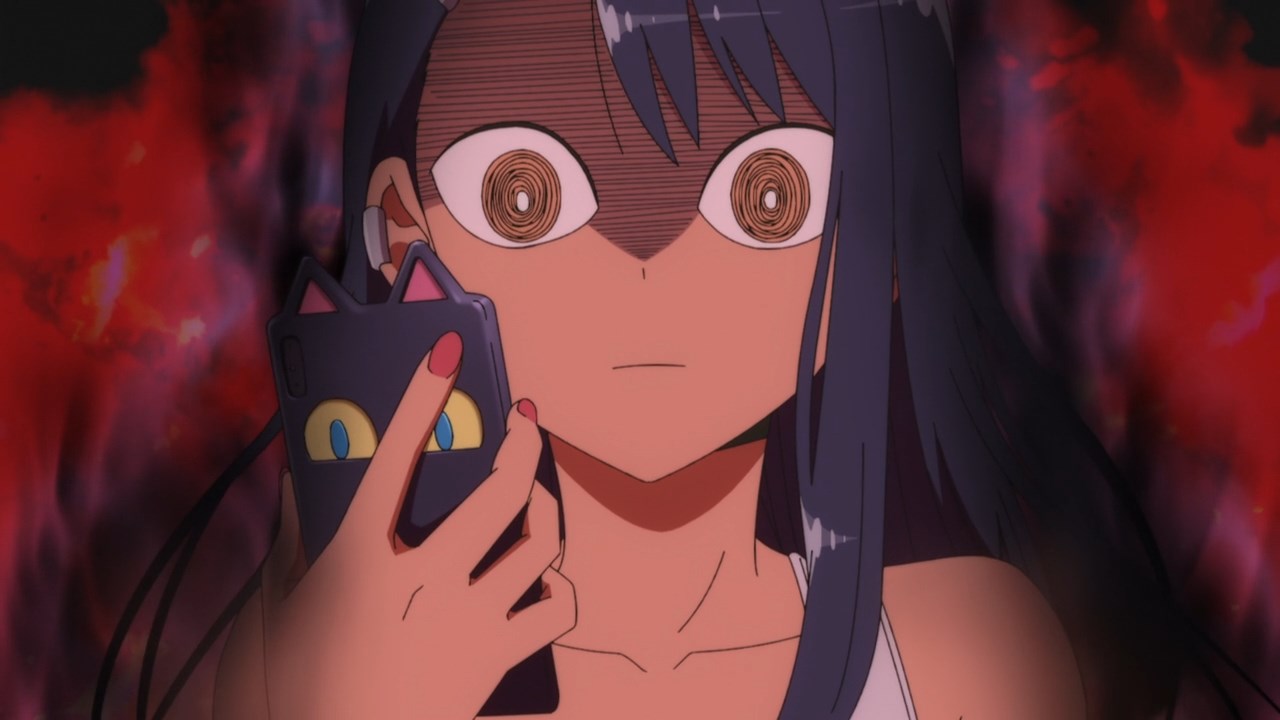 Well, that’s until Nagatoro-san saw a picture of Mr. Sempai being tied to a dog leash by Gamo-chan. Man, Gamo-chan really wants to piss Nagatoro off! 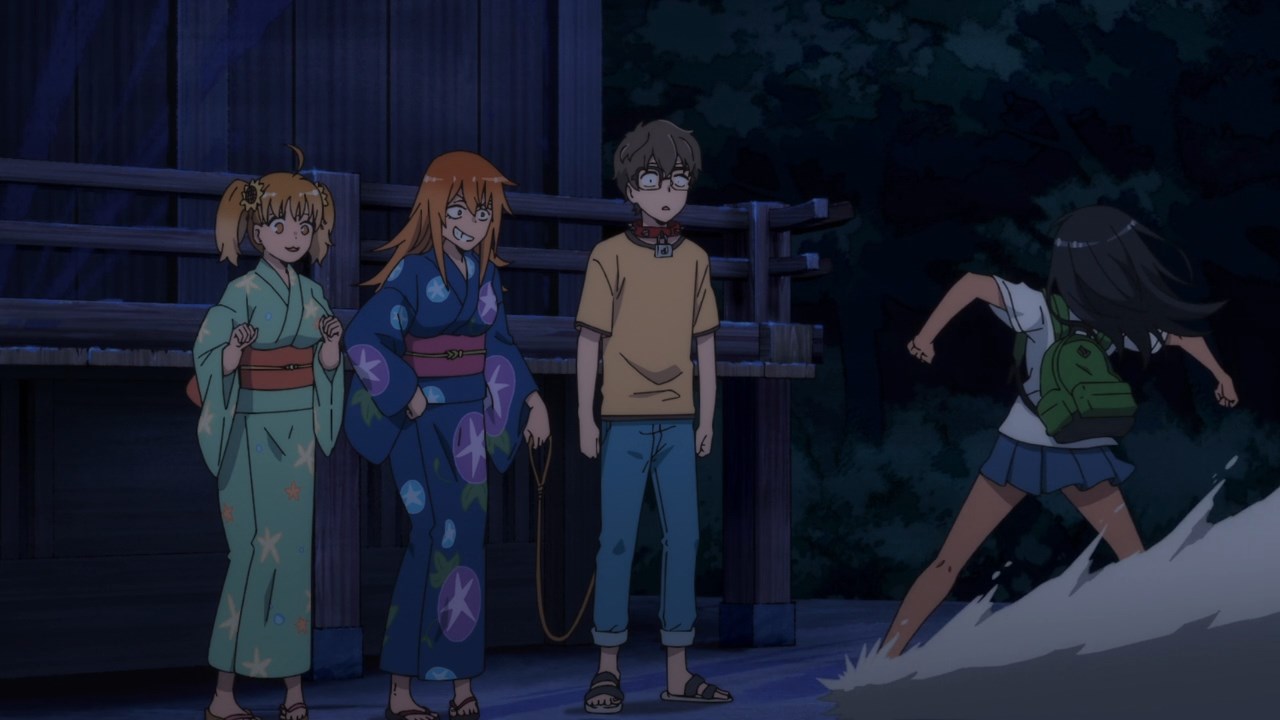 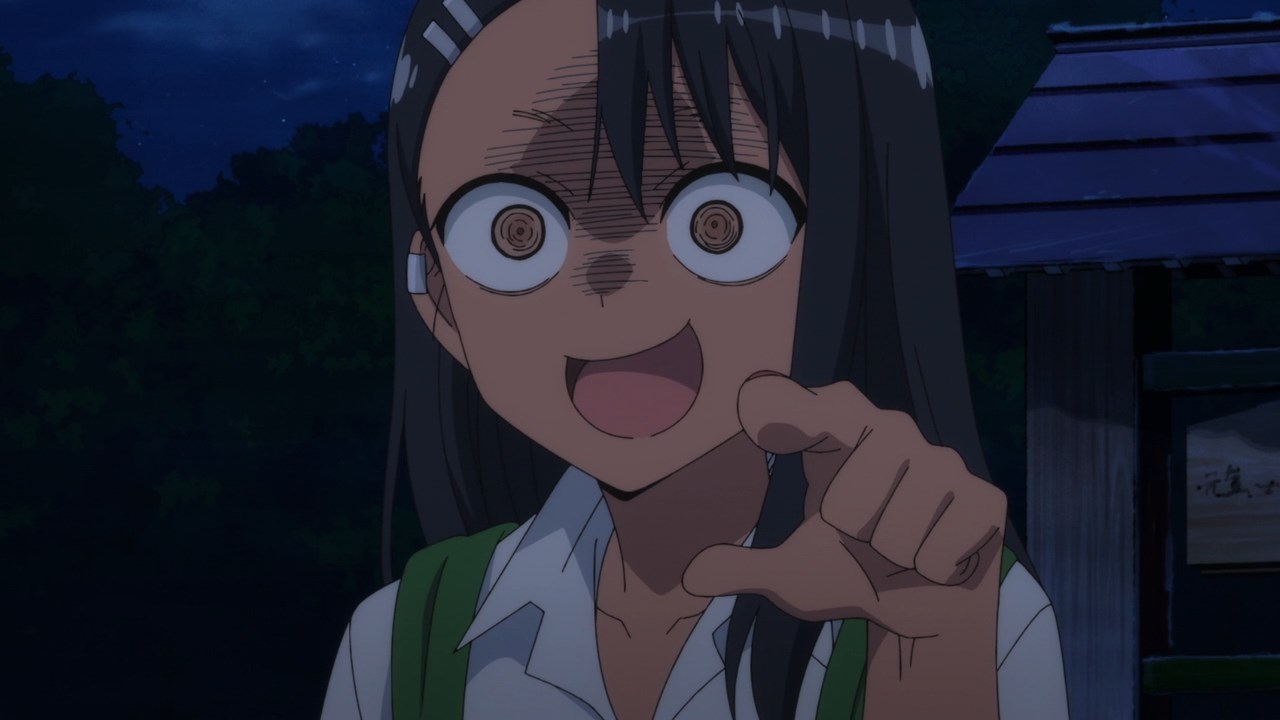 But anyways, Hayase Nagatoro has finally arrived as she demanded Gamo-chan to hand over the leash to her. C’mon, she really wants to make Sempai as her pet. 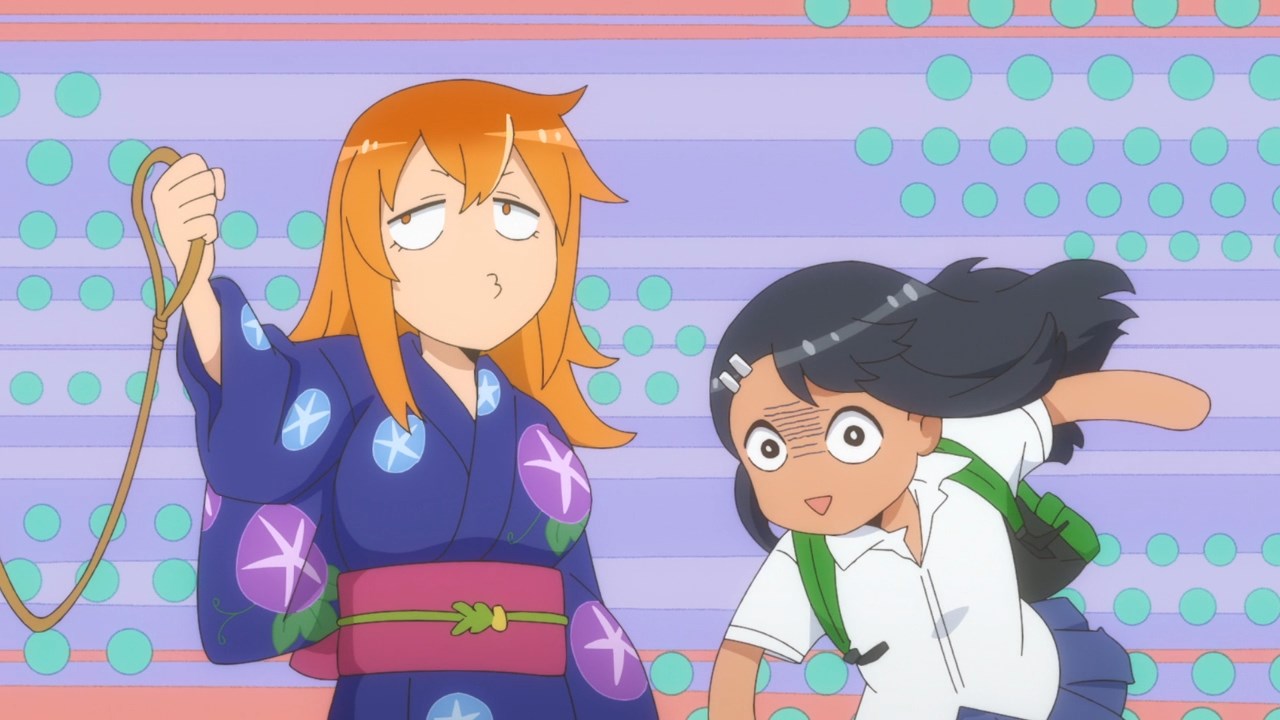 Except that Gamo-chan won’t let Nagatoro yank Mr. Sempai unless she beats her scummy gyaru friend in a game.

Well, there’s plenty of stalls that hosts mini-games so they can use those to see who can own Mr. Sempai. 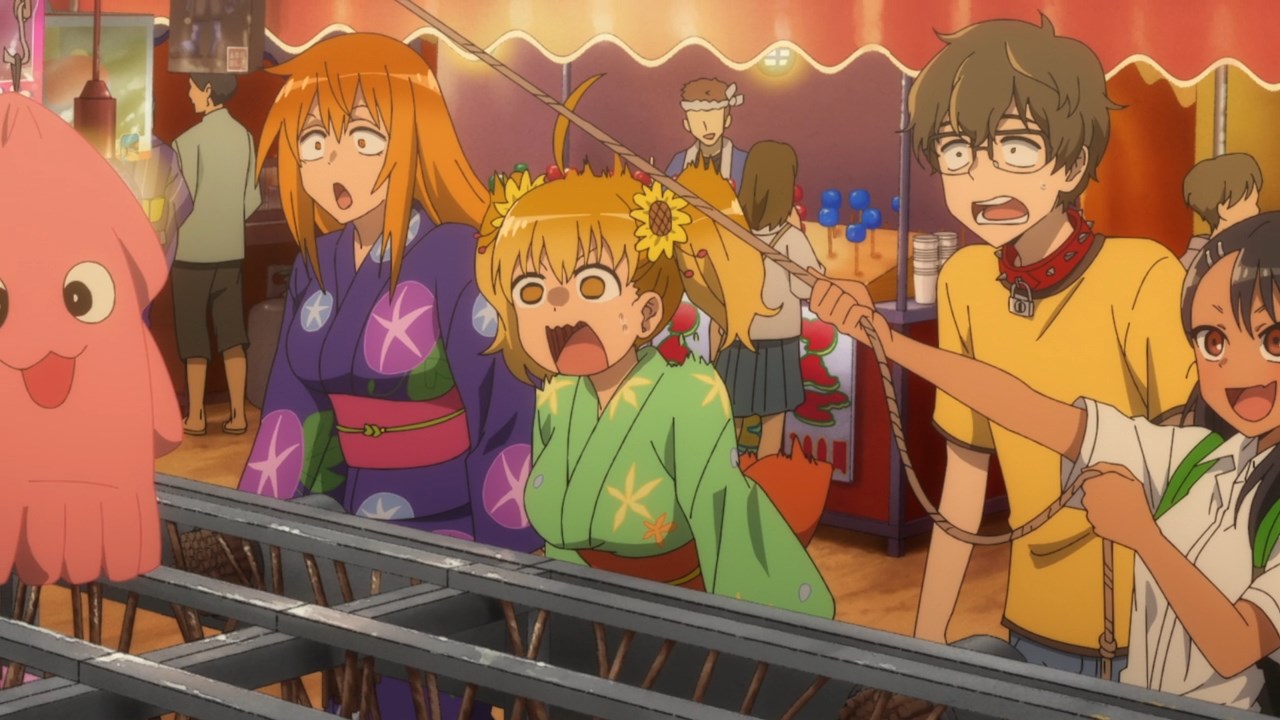 In any case, both Nagatoro and Gamo-chan competed for the right to take Mr. Sempai as their pet. Of course, Hayacchi got really lucky as she won against Gamo-chan. 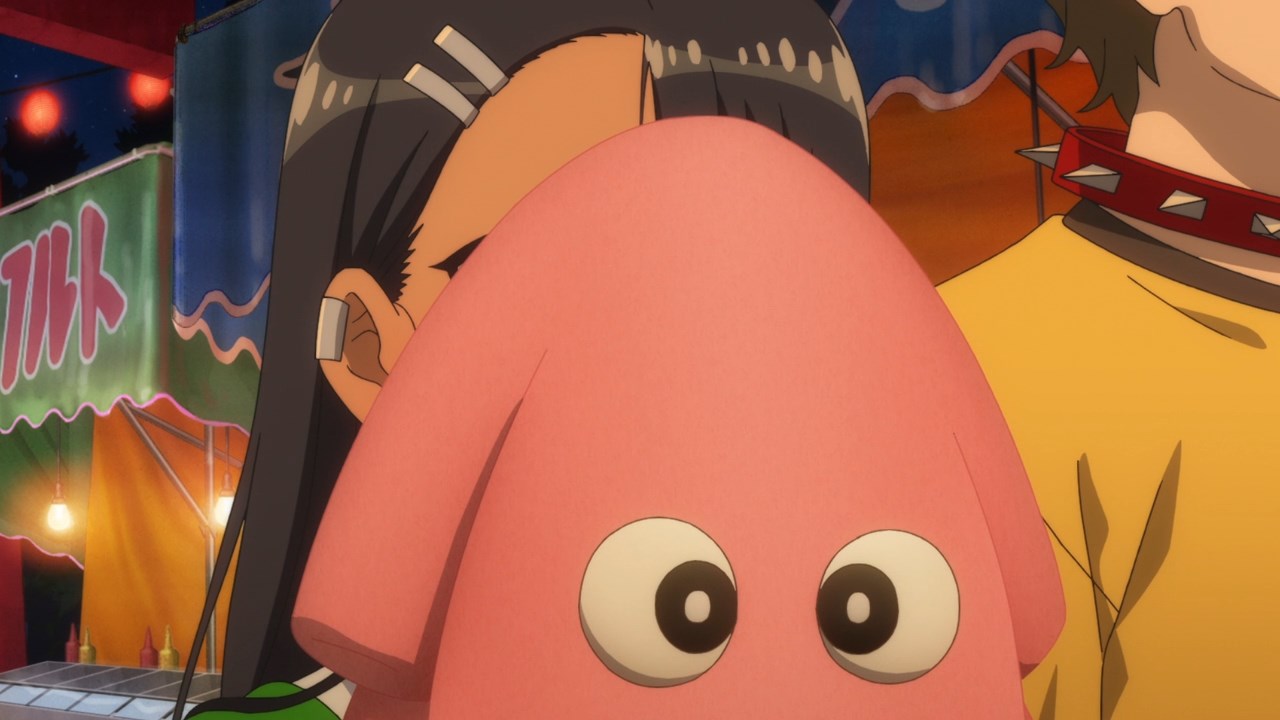 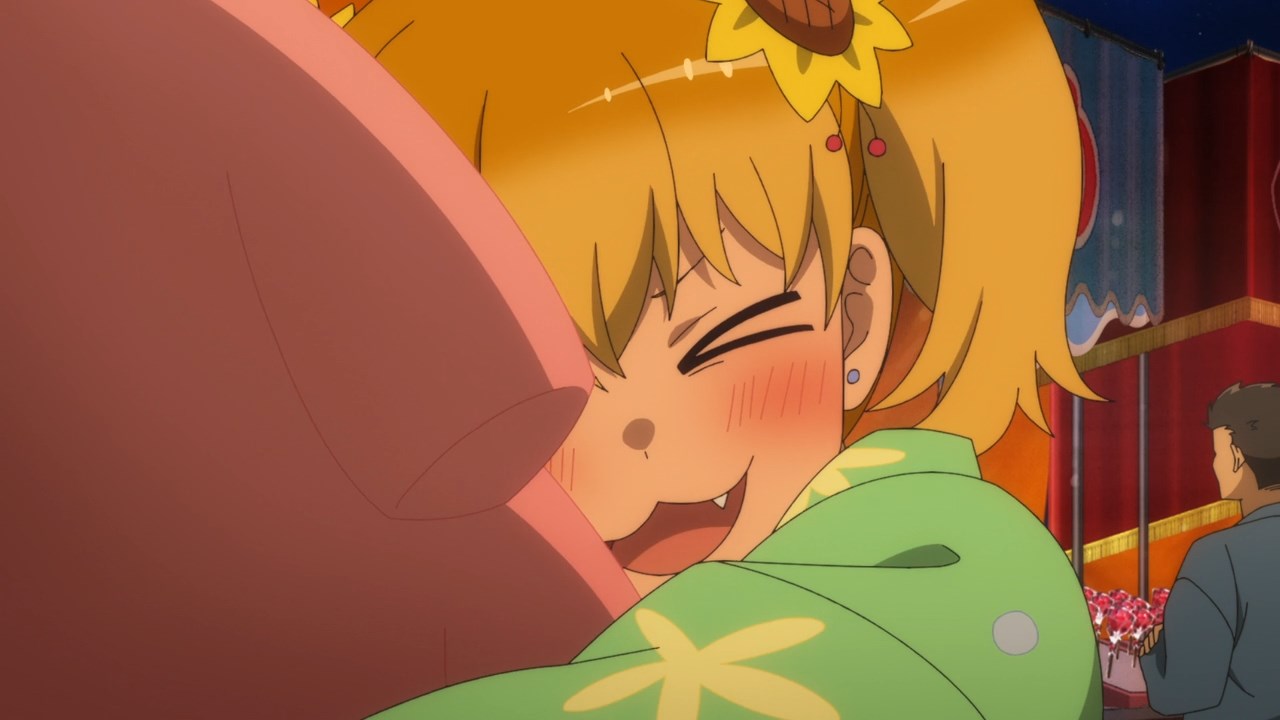 Oh and to rub salt onto Gamo’s wounds, she gave the large (and rare) Gesopie plushie to Yosshi. Basically, Nagatoro bribed Gamo’s best friend to secure her victory. 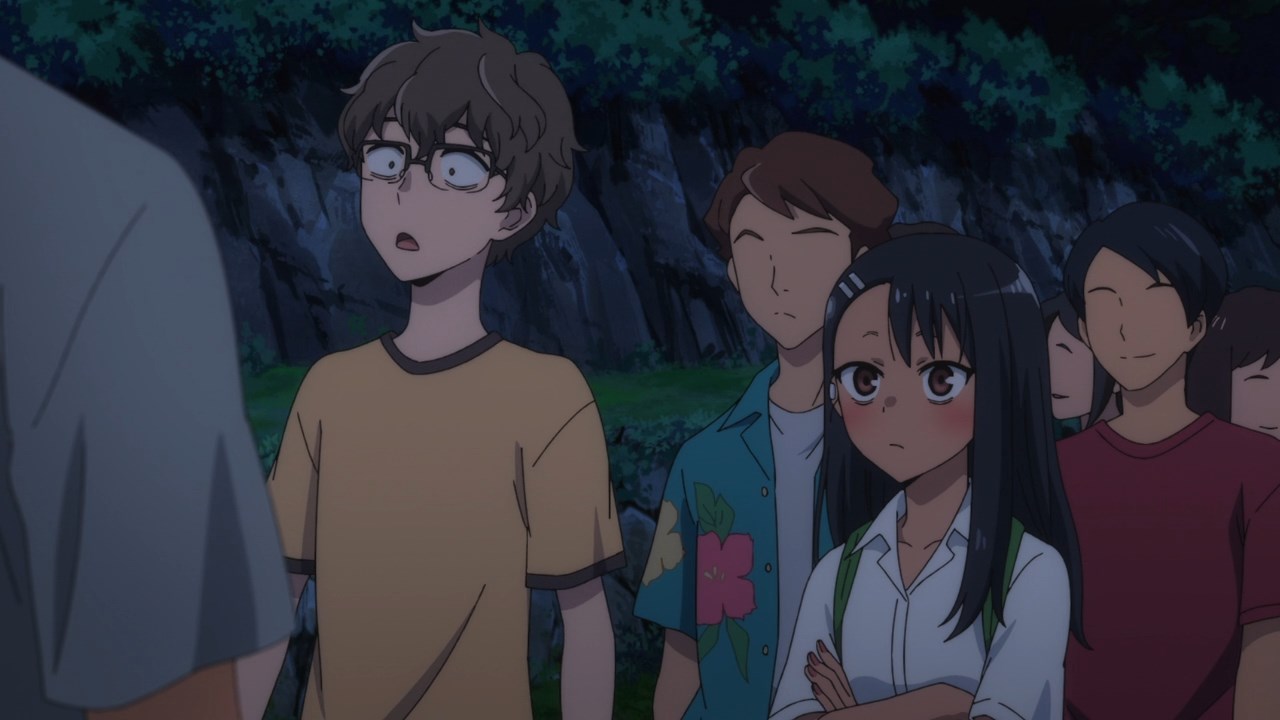 But now that she won the right to own Sempai over Gamo-chan, it’s time for Nagatoro and her pet to watch the fireworks.

Unfortunately, the venue is very far away thanks to this long line of visitors. It would be bad if they’re stuck in this line ’cause the fireworks display would be over by then. 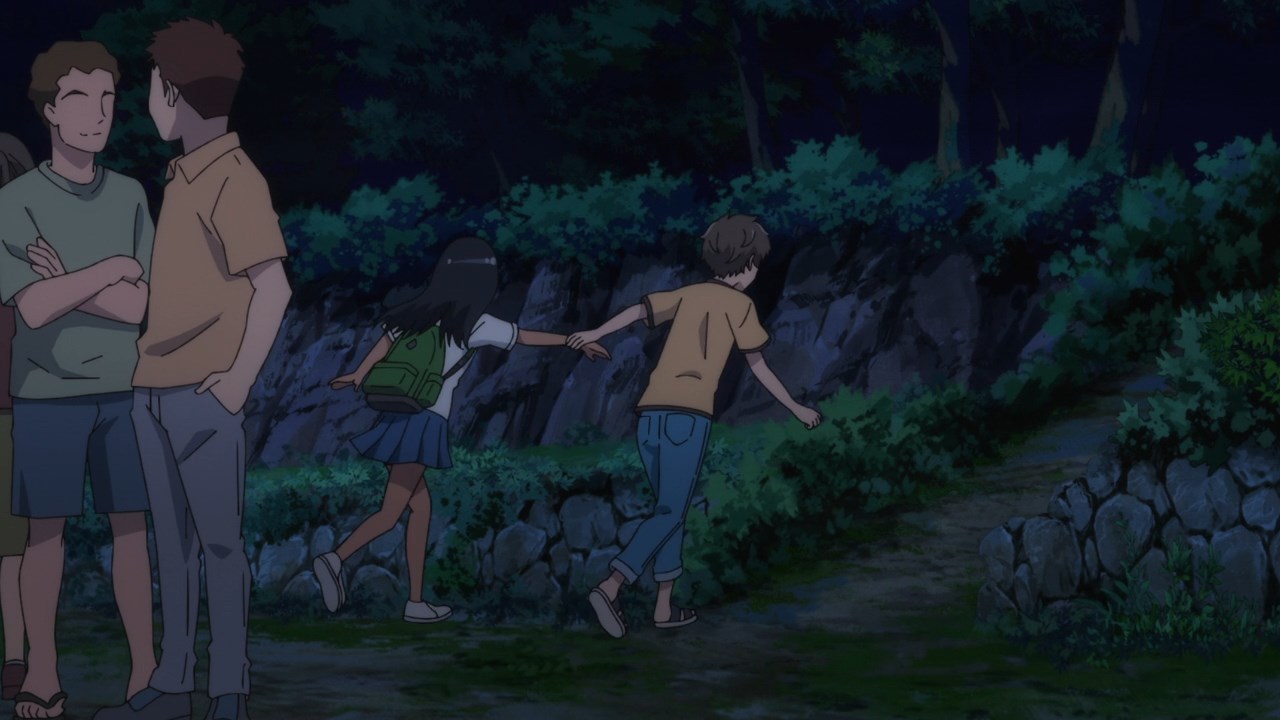 Luckily, Sempai found an alternate venue as he dragged Nagatoro-san out of the line. Then again, I wonder if that place he recommended is nowhere to be found? 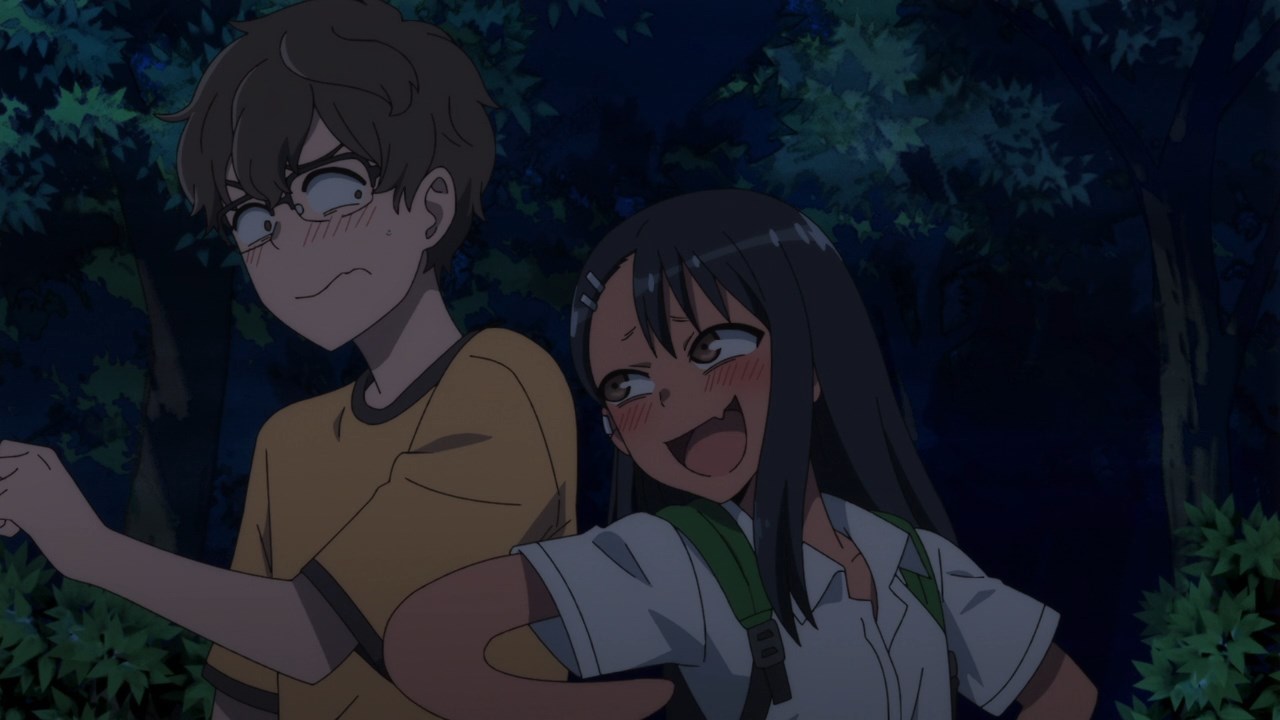 On the other hand, looks like Hayase Nagatoro is surprised that her nameless upperclassman has the gall to pull her out to some shady place.

Then again, Nagatoro-san won’t expect Mr. Sempai to assault her ’cause he’s a virgin who don’t have a guts to do it. Actually, Mr. Sempai doesn’t want to commit a crime! 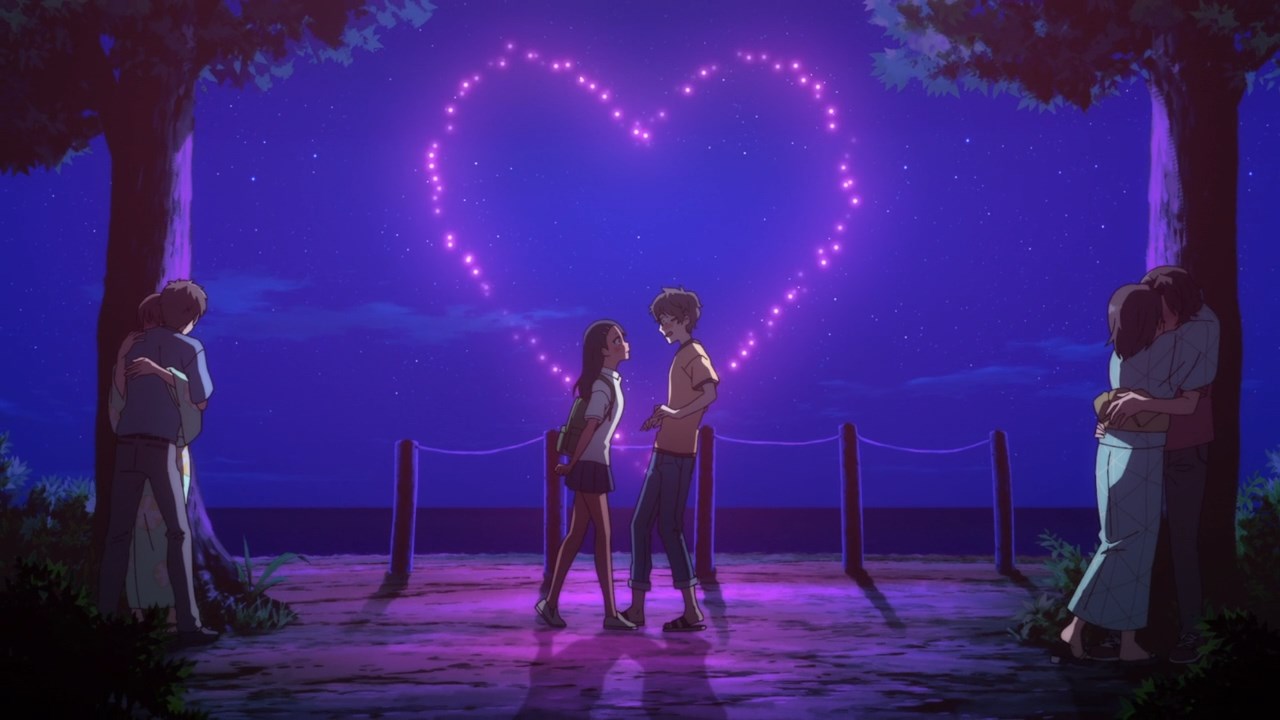 But anyways, Sempai took Nagatoro to a secret spot where they can watch the fireworks uninterrupted, only to find out that it’s full of couples. Well, this place is a dud! 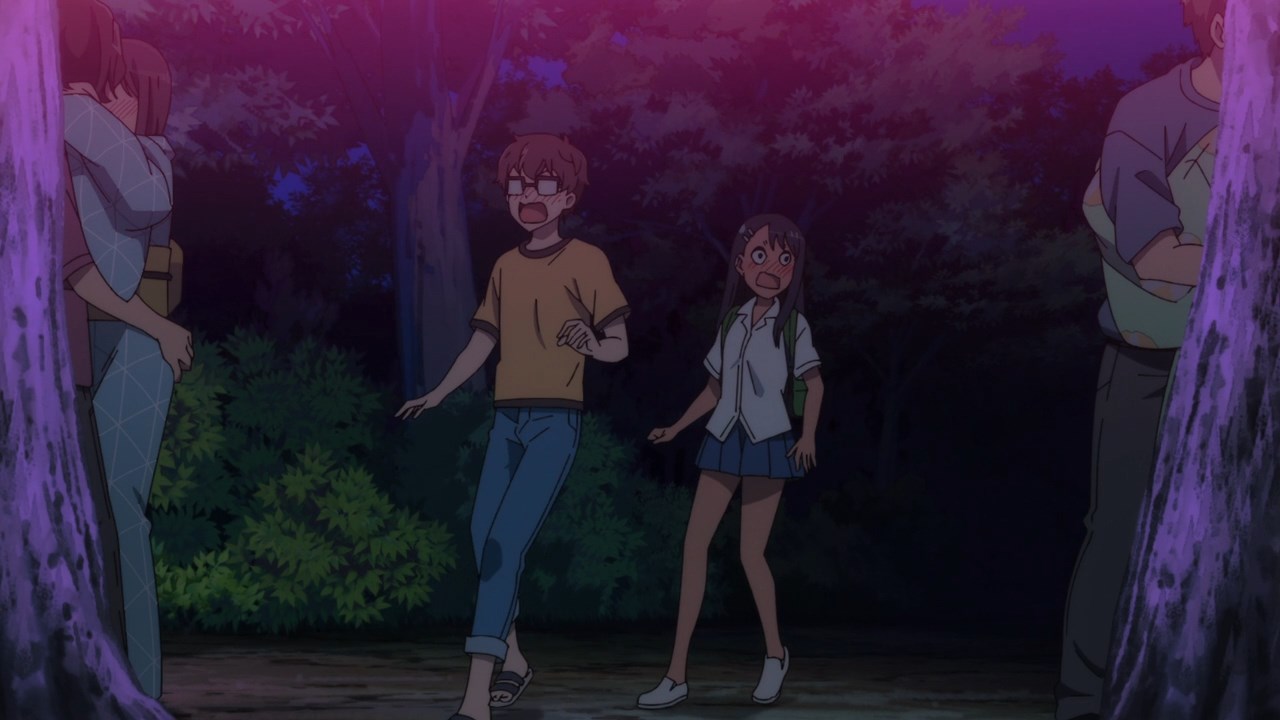 Heck, even both Sempai and Nagatoro-san are shocked to see couples kiss and hug. You know what, I think they should ignore those normies and enjoy the fireworks instead! 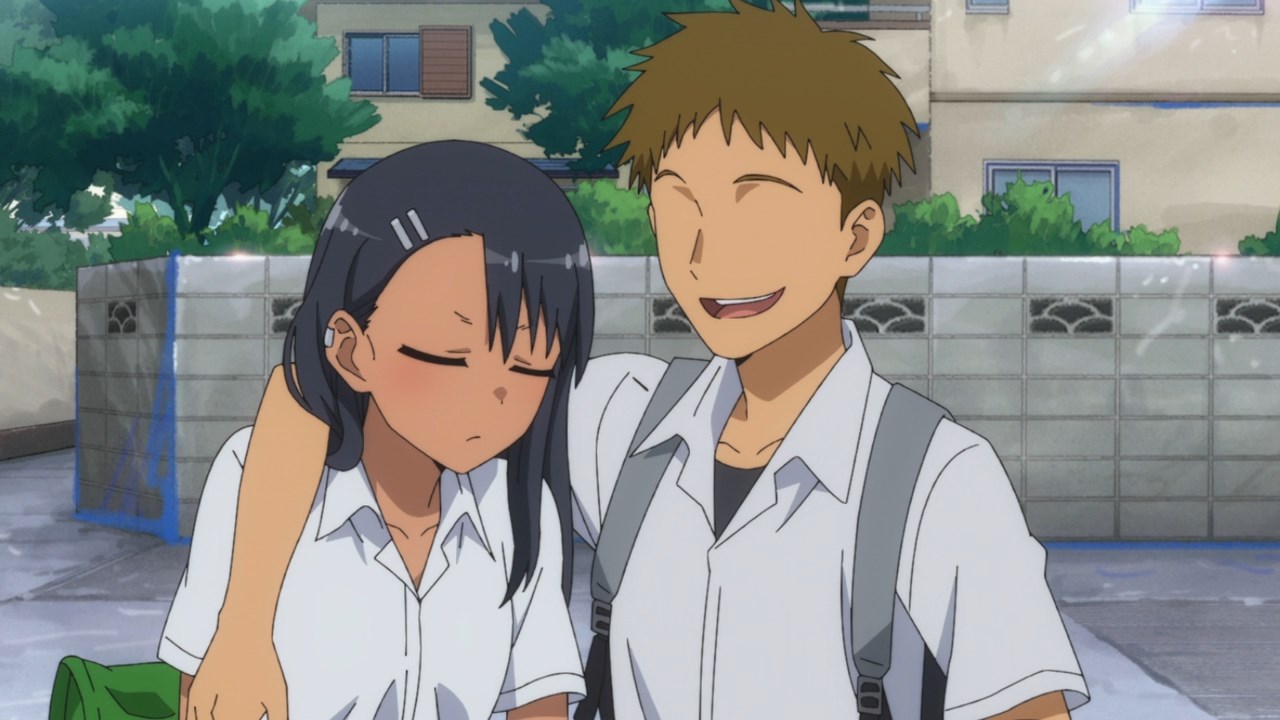 One last thing, looks like some random dude is flirting towards Nagatoro-san. Oh I bet that Mr. Spineless Sempai is really jealous because this guy is cucking him. 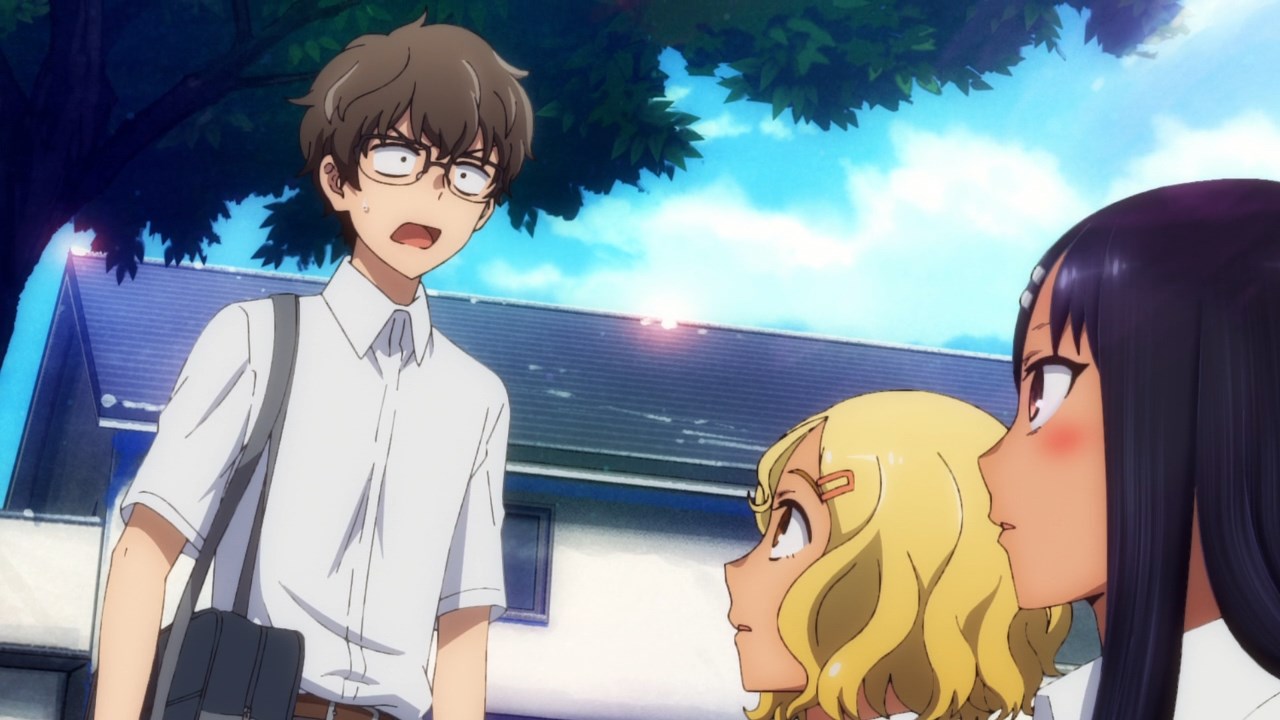 That’s until our nameless protagonist decides to grow a spine and asked Nagatoro-san to take his hand ’cause they’re going home. I wonder if Nagatoro decides to reject Sempai’s offer? 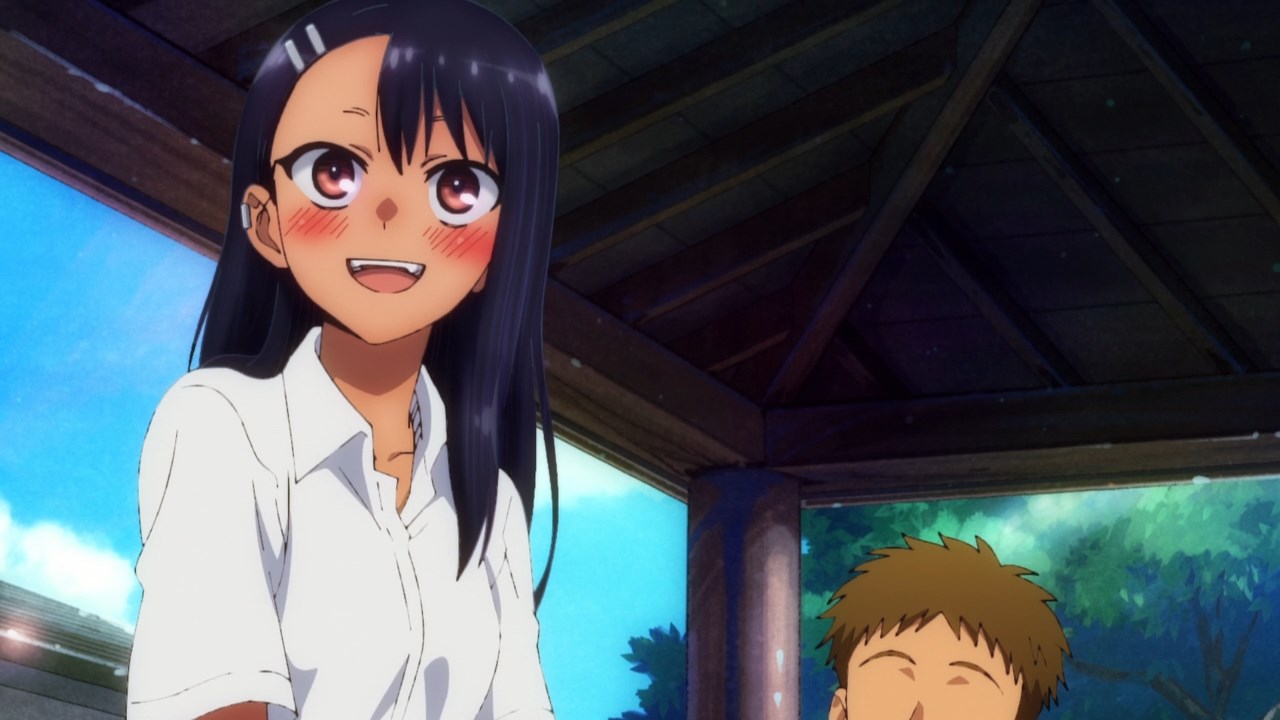 Oh no, turns out that Nagatoro-san wants to be with Mr. Sempai ’cause he’s more interesting than some cool dudes who haven’t got laid yet. 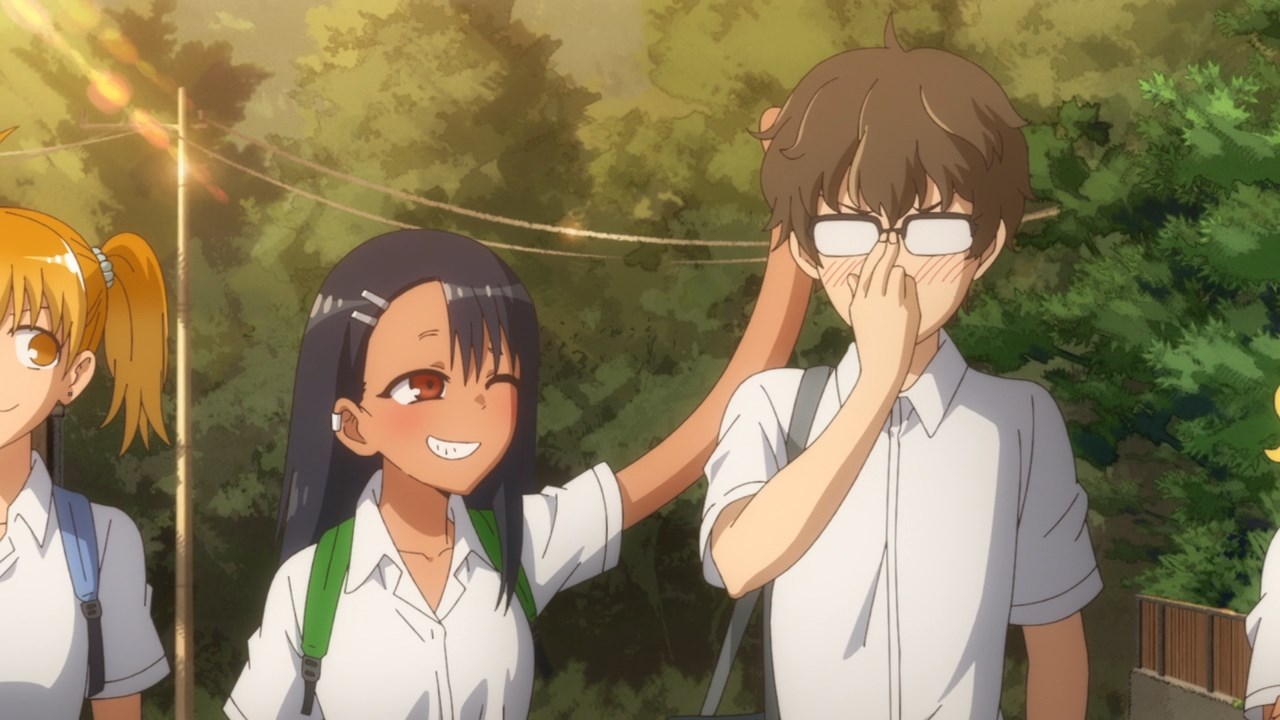 But all’s well that ends well as Mr. Sempai went home together with Hayase Nagatoro and her gyaru buddies. Seriously, I thought that he’ll be chickening out on the last part of Episode 7!

Anyways, I’ll see you next time and I don’t expect for them to be a couple. I mean, Mr. Nameless Sempai is still too timid to have a girlfriend.