Joran: The Princess of Snow and Blood Episode #09 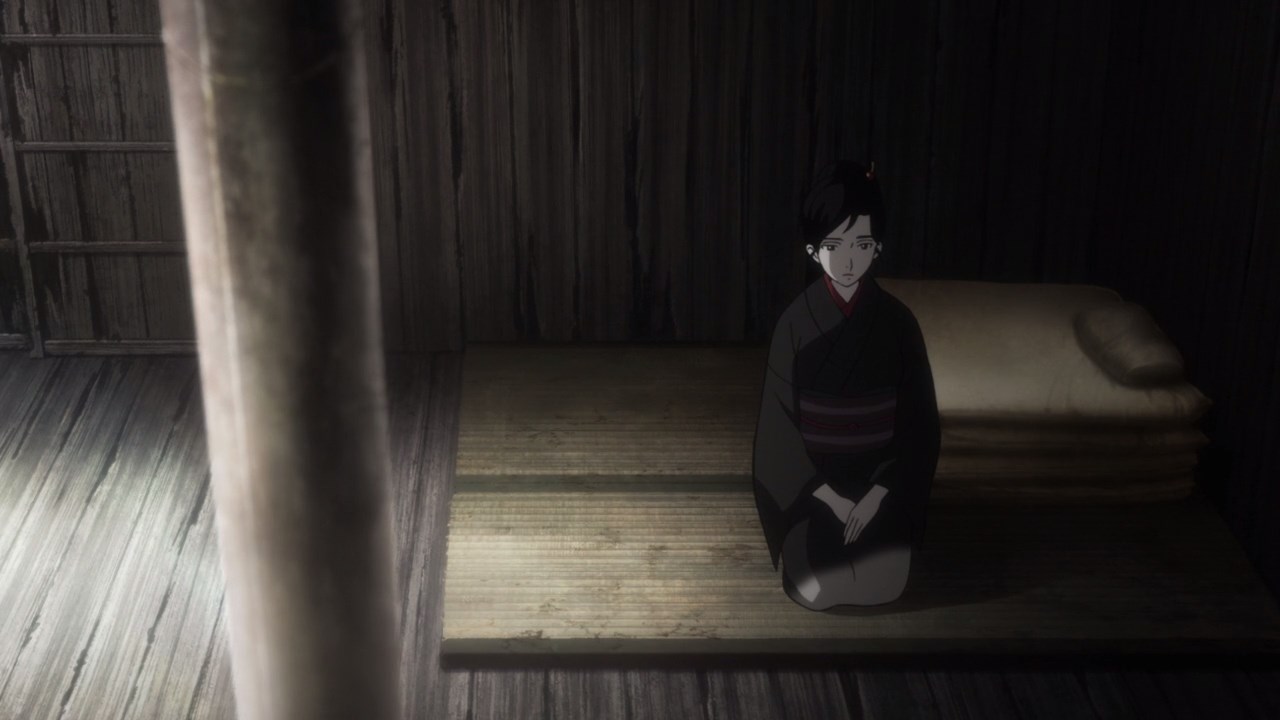 Well then, looks like Sawa Yukimura has finally recovered thanks to Jin Kuzuhara saving her from getting drowned. C’mon, Kuzuhara wants to use her as soon as she can. 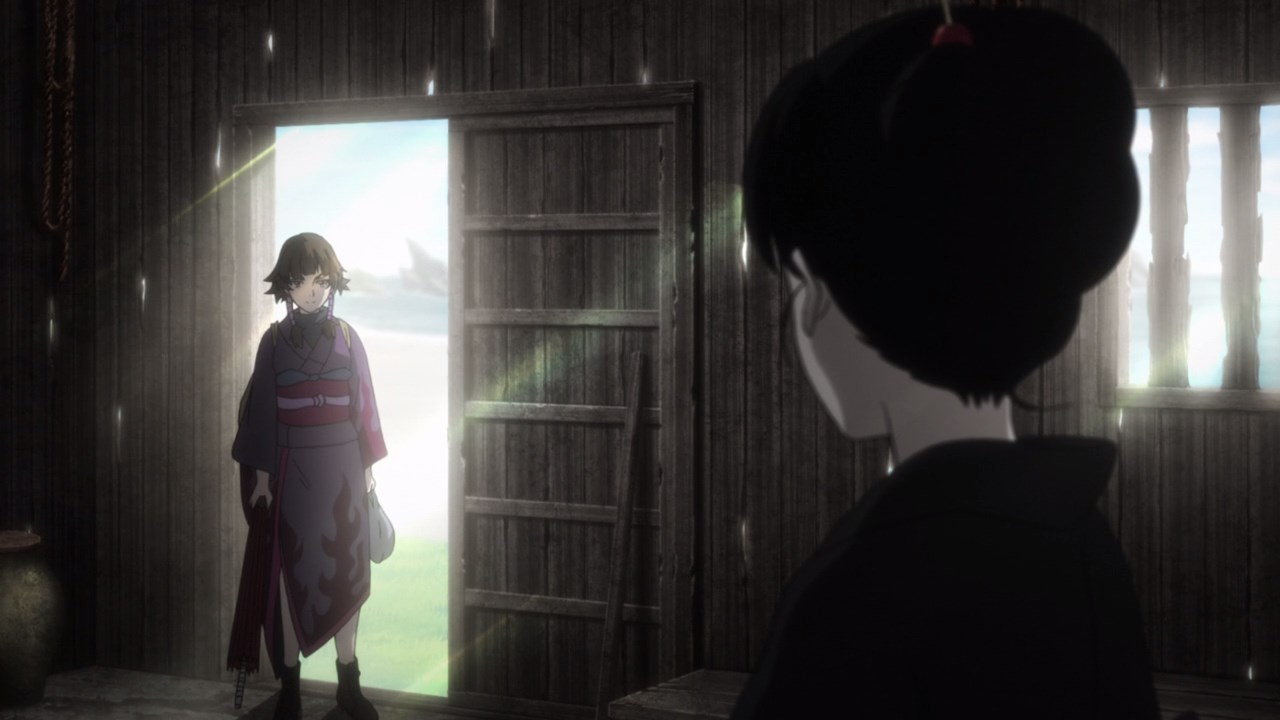 Oh yeah, looks like there’s a new character introduced… until it’s revealed that this woman is actually Rinko where she works as a Nue executioner. 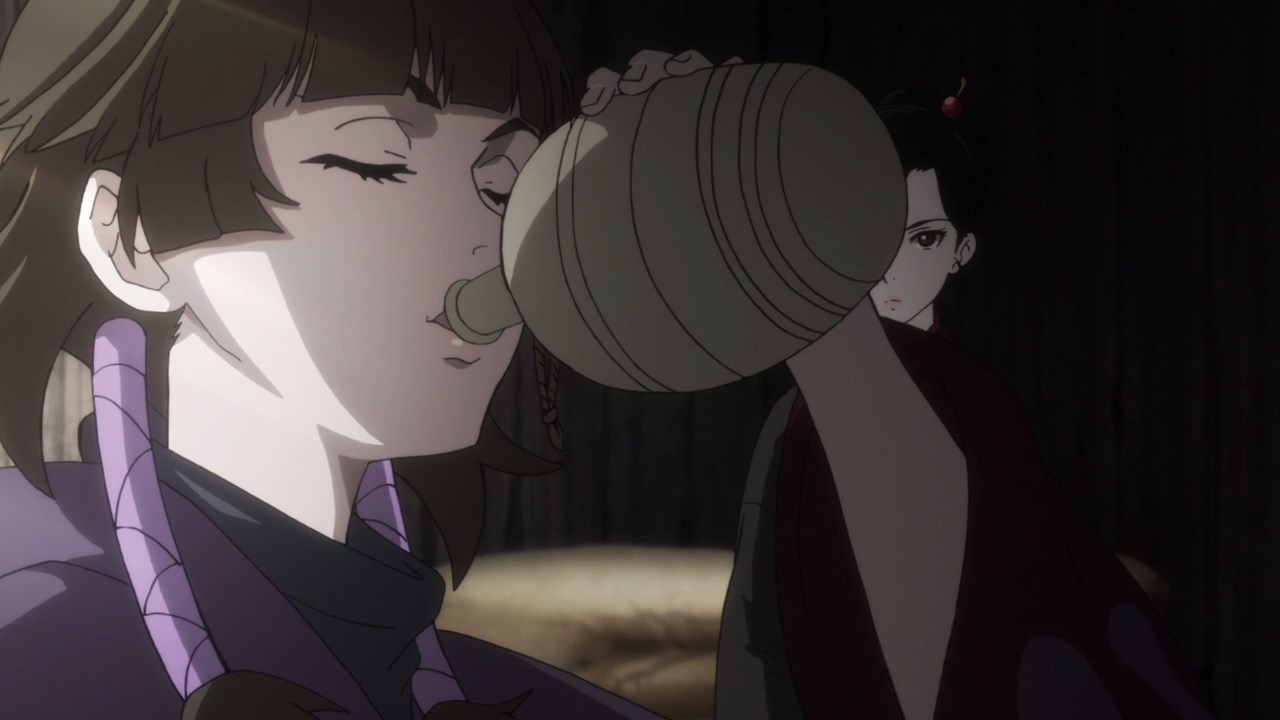 And aside from having a different look, Rinko loves to drink lots of alcohol as she told Sawa to return to Tokyo. Then again, why she’s working at Nue?

Well, Rinko revealed that she’s keeping an eye on Sawa Yukimura most of the time. Hence, Jin Kuzuhara managed to save Sawa ’cause he got some agents patrolling on various remote areas. 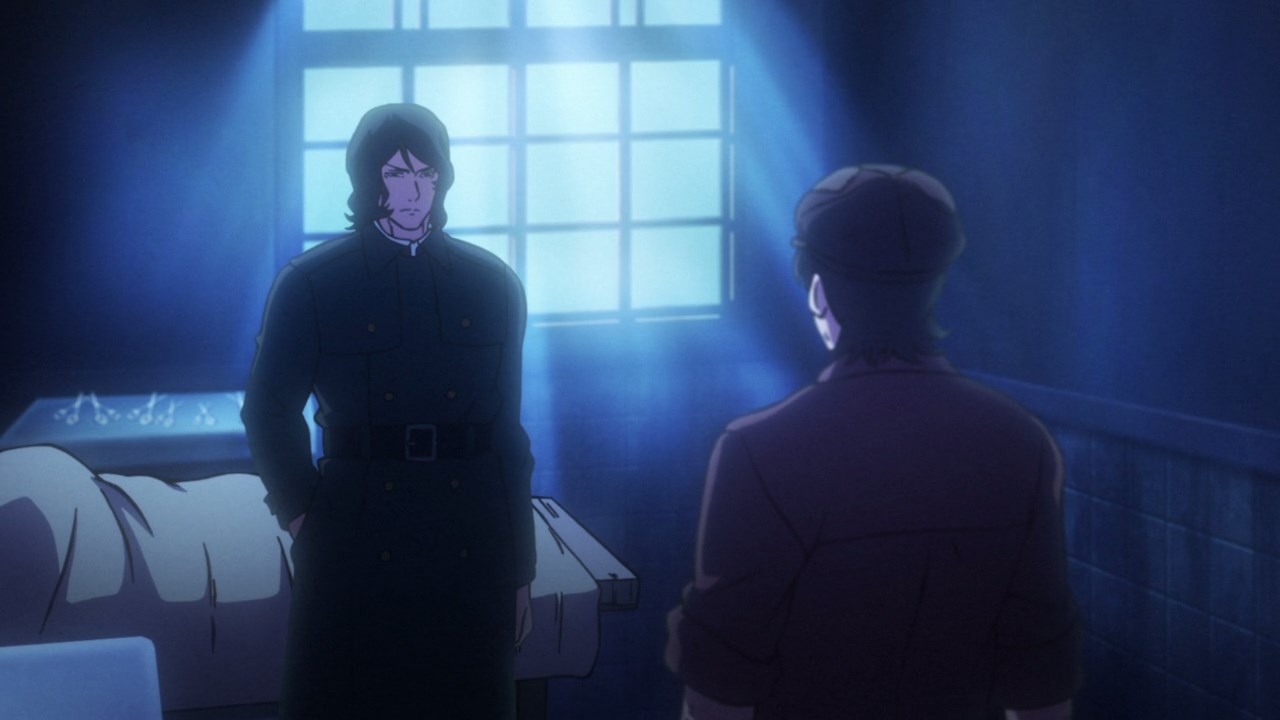 But let’s return to Jin Kuzuhara where he has a plan towards those rebels, although it’ll be extremely painful. 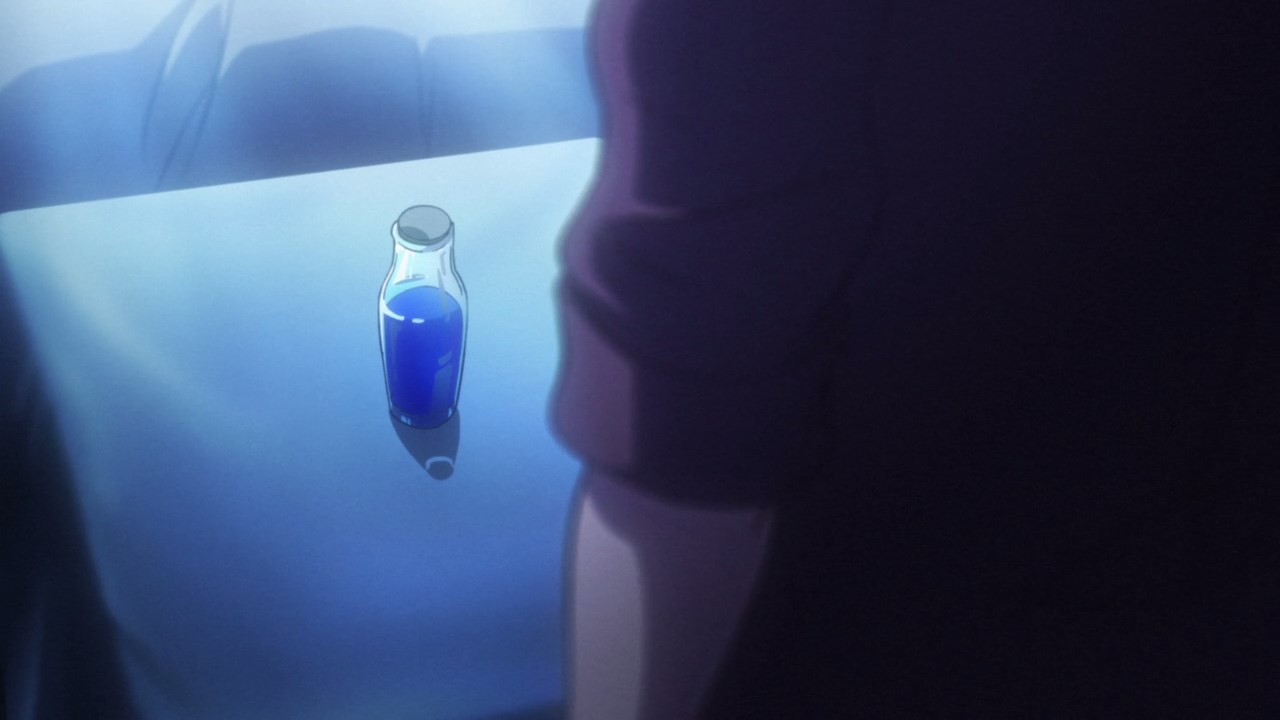 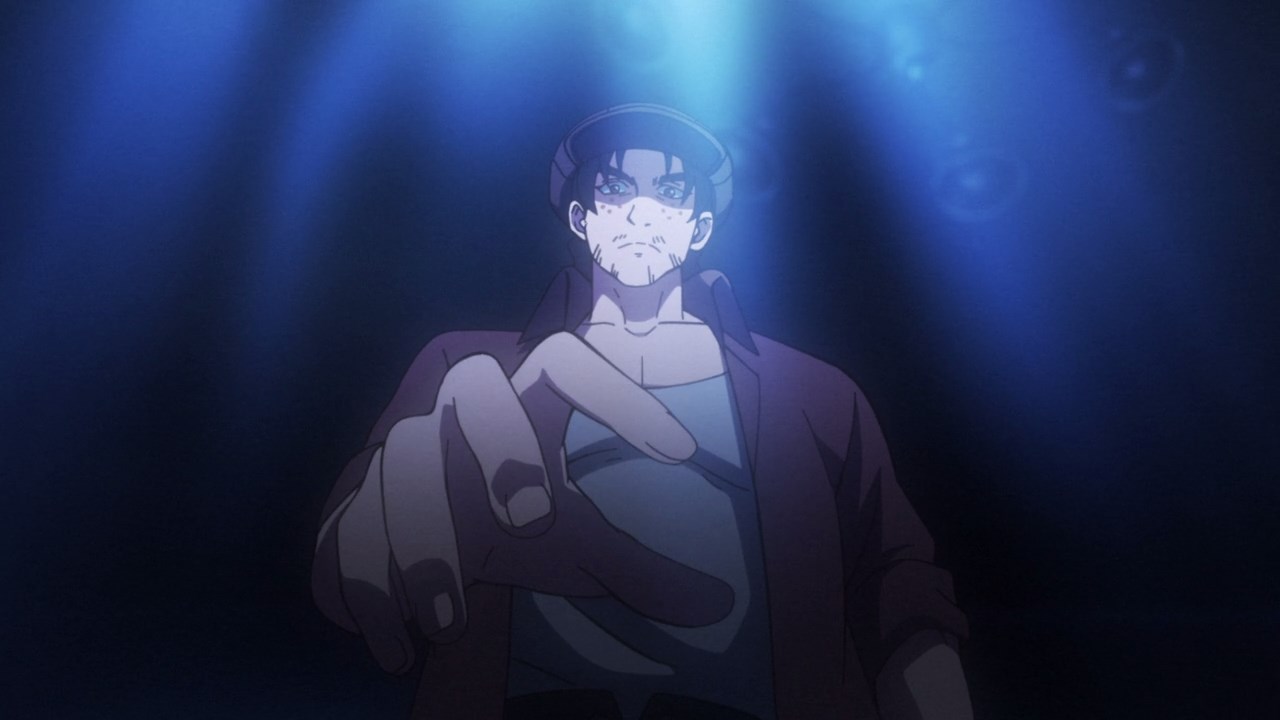 You see, Kuzuhara gave them a vial of Changeling fluid which the scientists from the shogunate managed to perfect Janome’s formula, although I have a feeling that they made it worse. 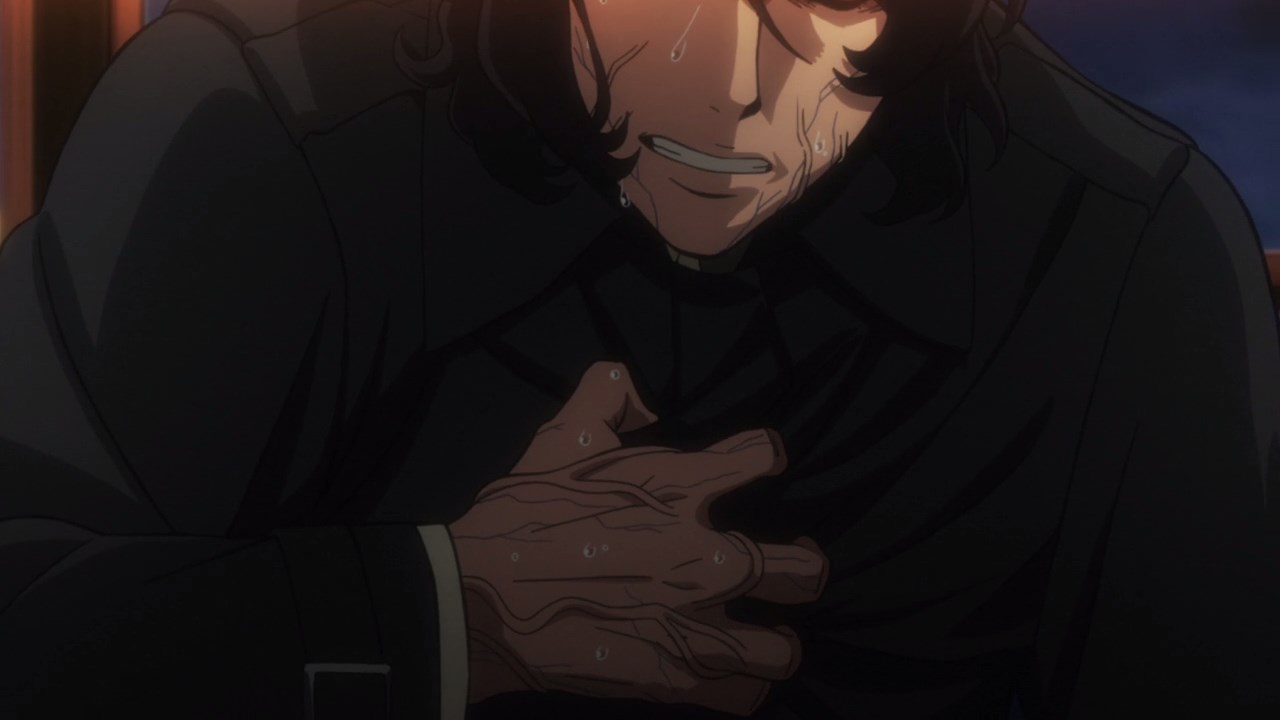 Speaking of Jin Kuzuhara, it appears that he did use the Changeling formula in which he tries to suppress it.

Come to think of it, I was wondering if he’s actually the black tengu? I mean, it’s possible that Jin Kuzuhara transformed into a Changeling and kill Makoto Tsukishiro back in Episode 8.

Still, Kuzuhara is pretty dangerous in which it’ll be difficult for Sawa Yukimura to stop him should they fight. 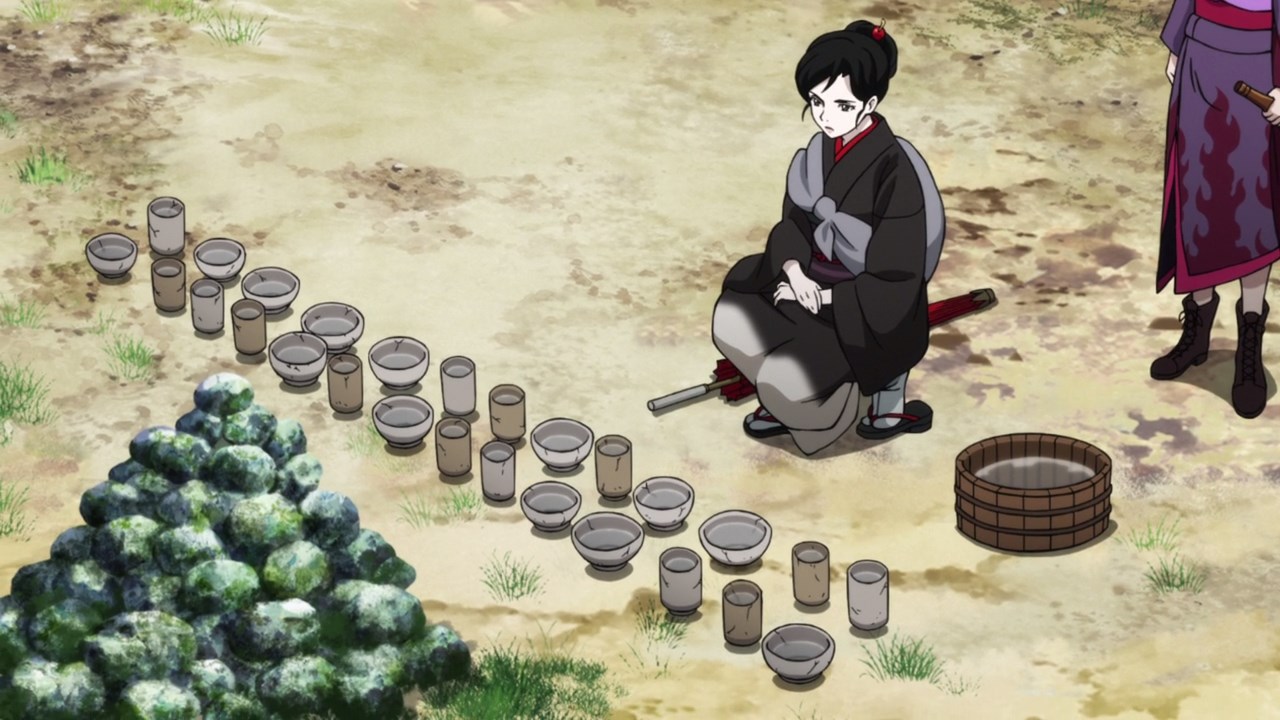 Now let’s return to Sawa where she went to her hometown to pay her respects to the Karasumori clan before moving back to Tokyo.

Speaking of the Karasumori clan, they have the ability to sense and use Ryumakyu to power themselves up, hence they’re being used as weapons or in the case of the current regime, they’re massacred due to being dangerous.

You know something, the Tokugawa Shogunate might have captured some people from Sawa’s hometown to search for Ryumakyu aside from using their blood. It’s no wonder why the regime remained powerful due to their exploitation of the Karasumori clan. 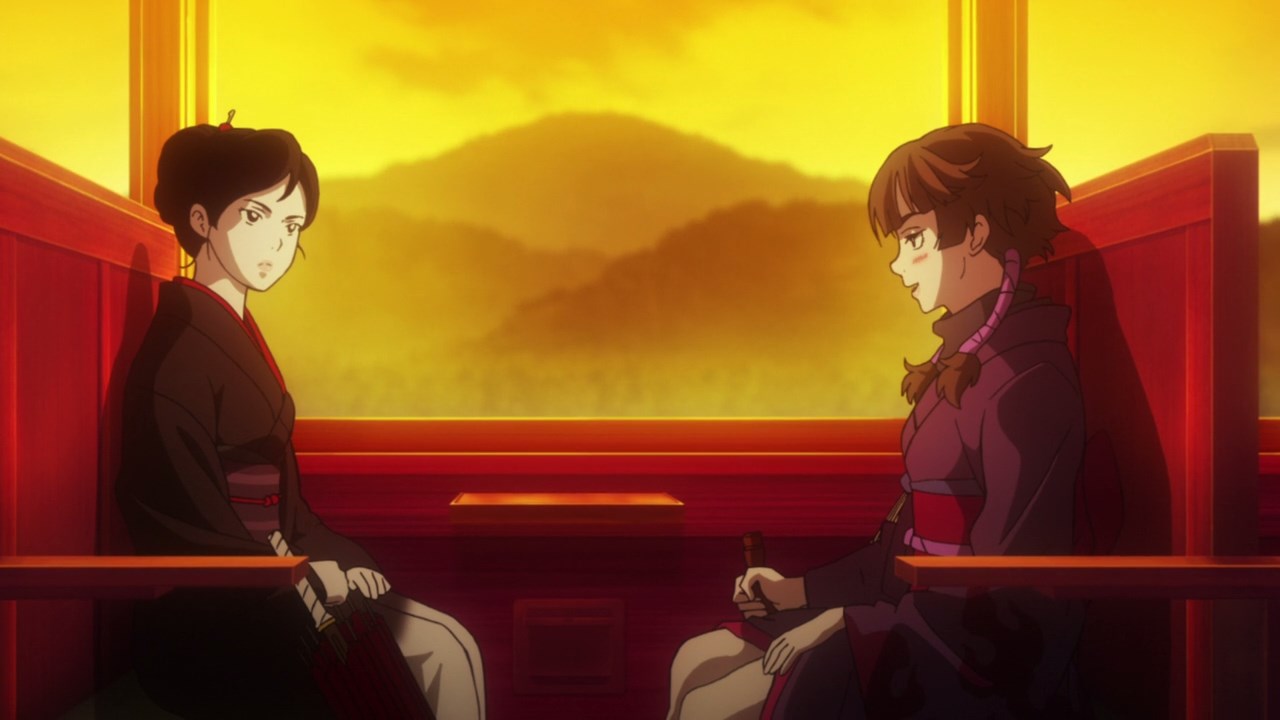 Afterwards, it’s time for Sawa and Rinko to take the train as they head back to the capital. While we’re at it, they’ll have a chat to pass the time. 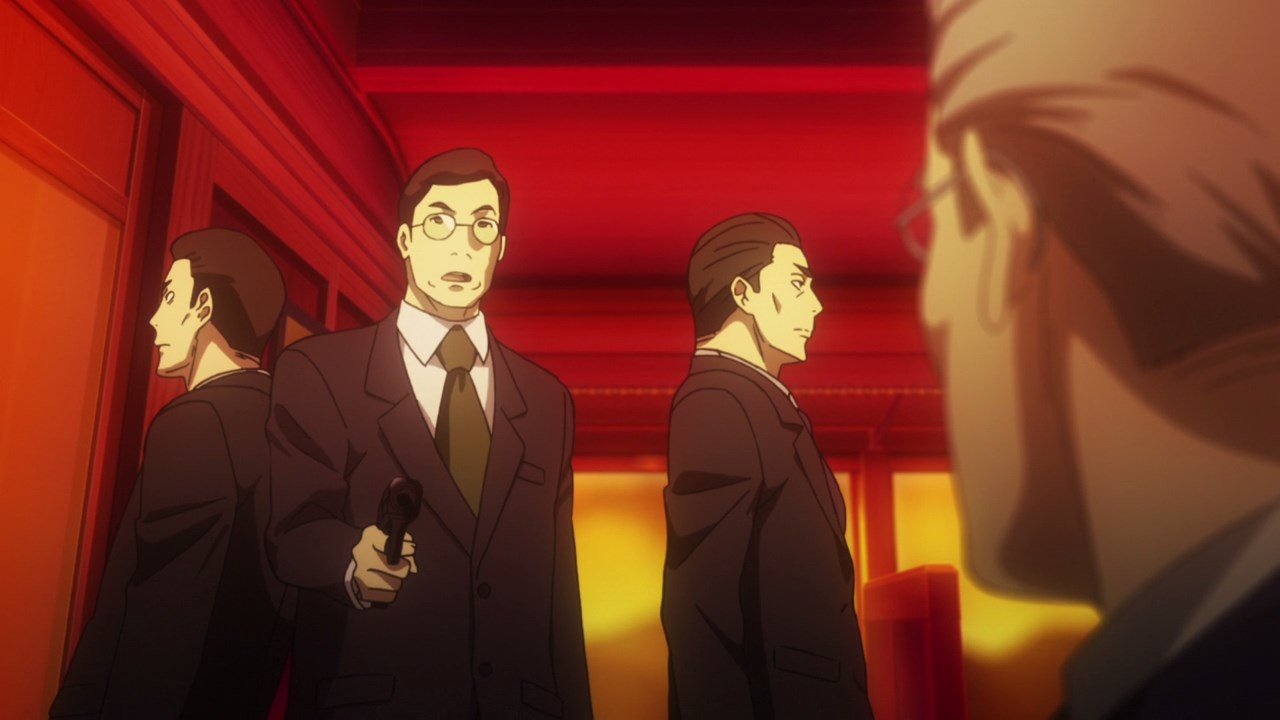 Unfortunately, a bunch of goons hijack the train in which they demanded the release of their comrades, although I bet that the shogunate already killed them in prison. 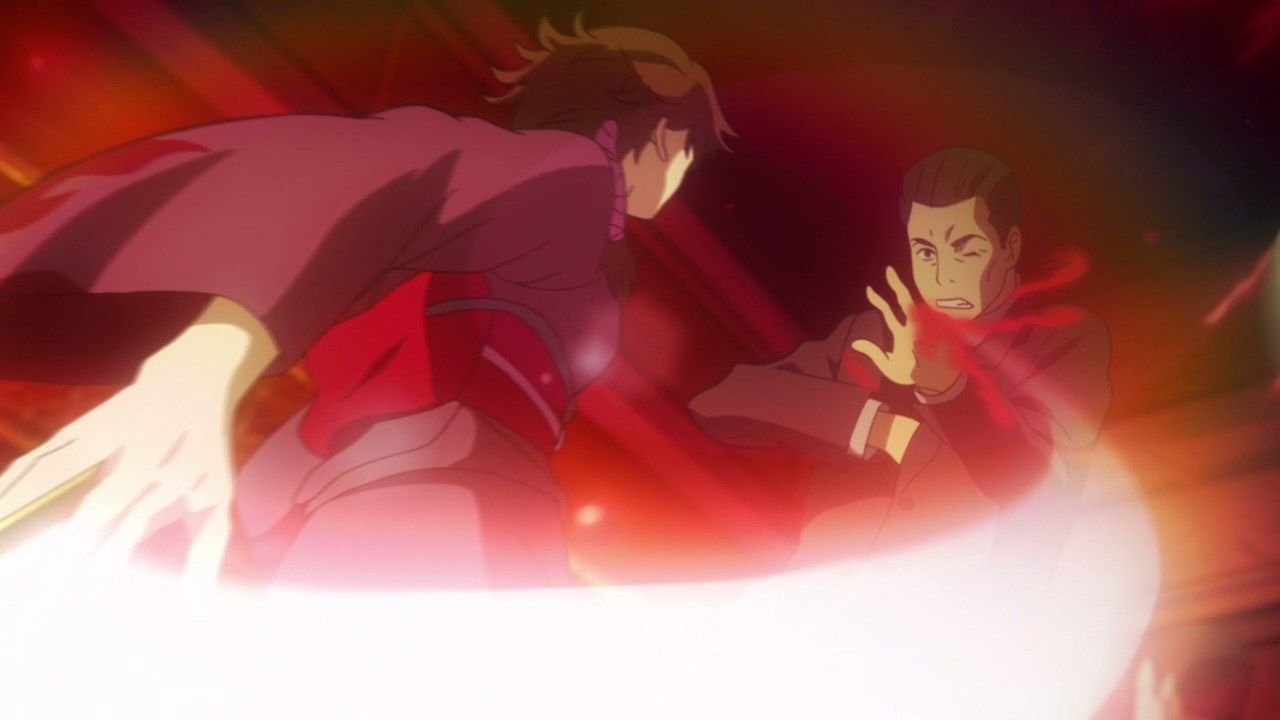 Luckily, Rinko intervened and killed some terrorists by unleashing a sharp metal blade from her skin. 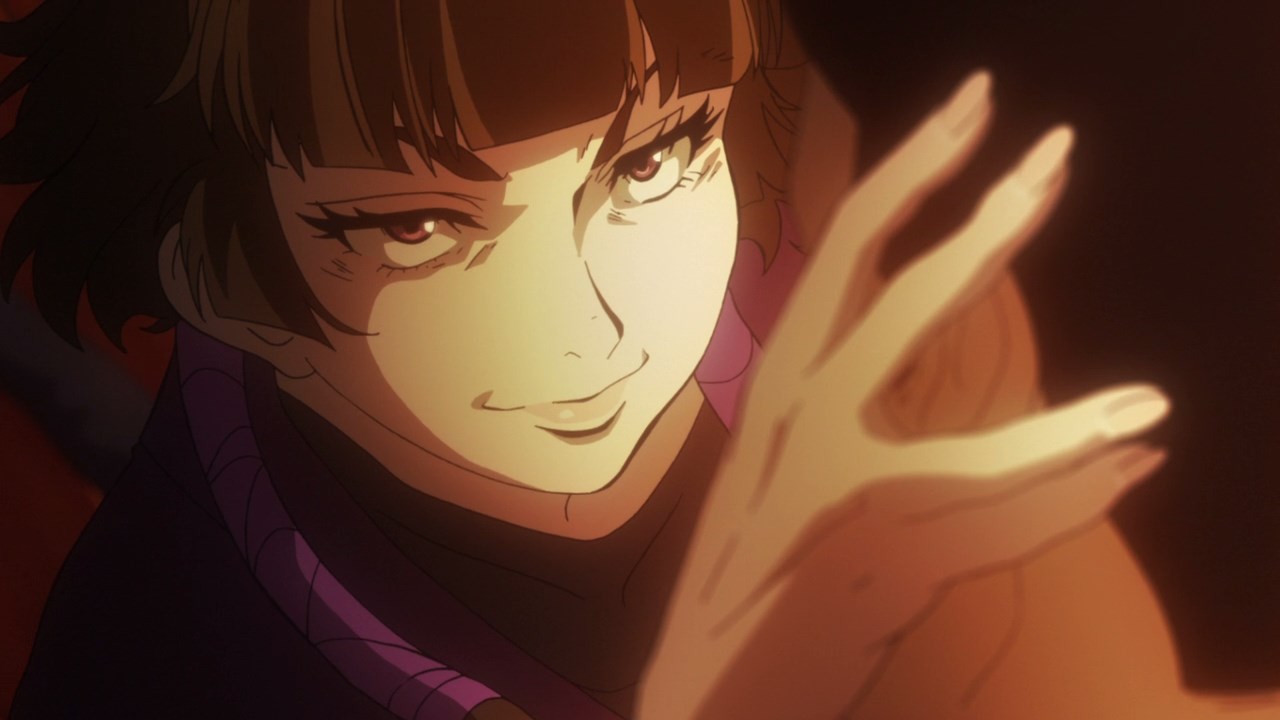 Oh yeah, there’s a horrible backstory to it as Rinko was tortured by scientists where they insert strips of a rare metal called oronium.

I have a feeling that the reason why she drink lots of alcohol is because Rinko doesn’t want to feel any pain when unleashing her strips of oronium. 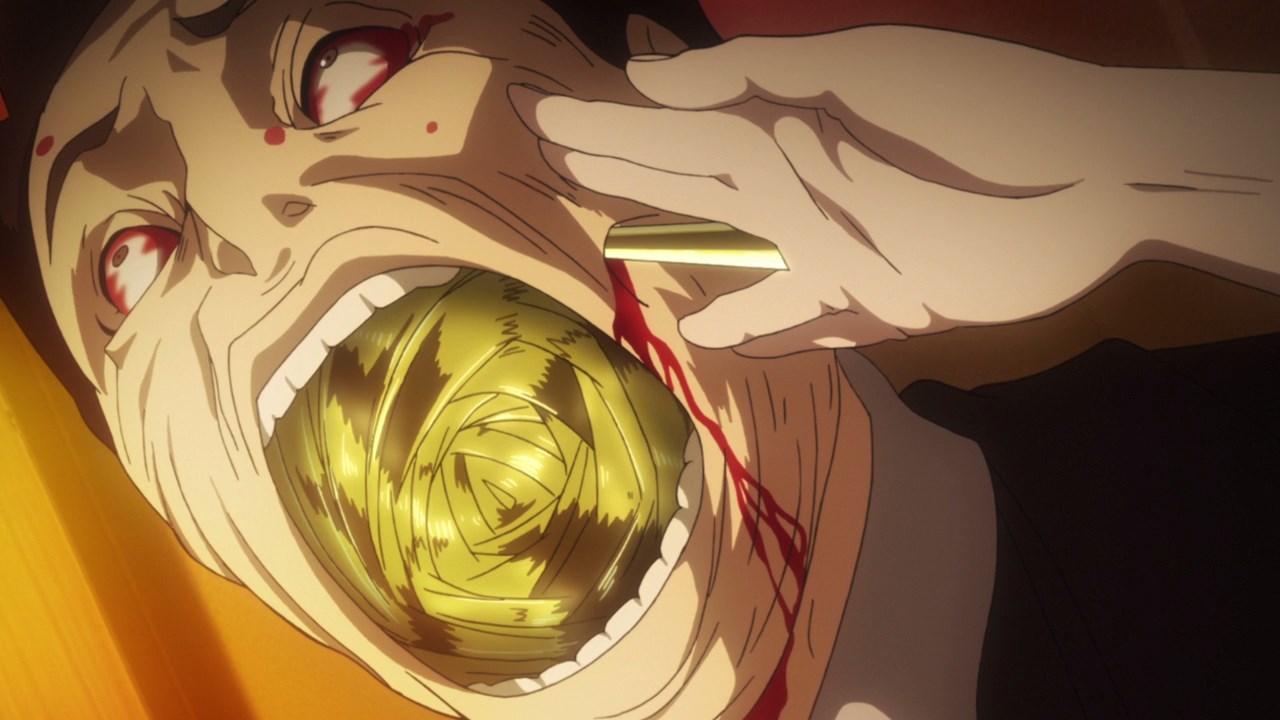 In any case, looks like these terrorists don’t stand a chance against Rinko, especially this guy where he got a fatal taste of her oronium strips. 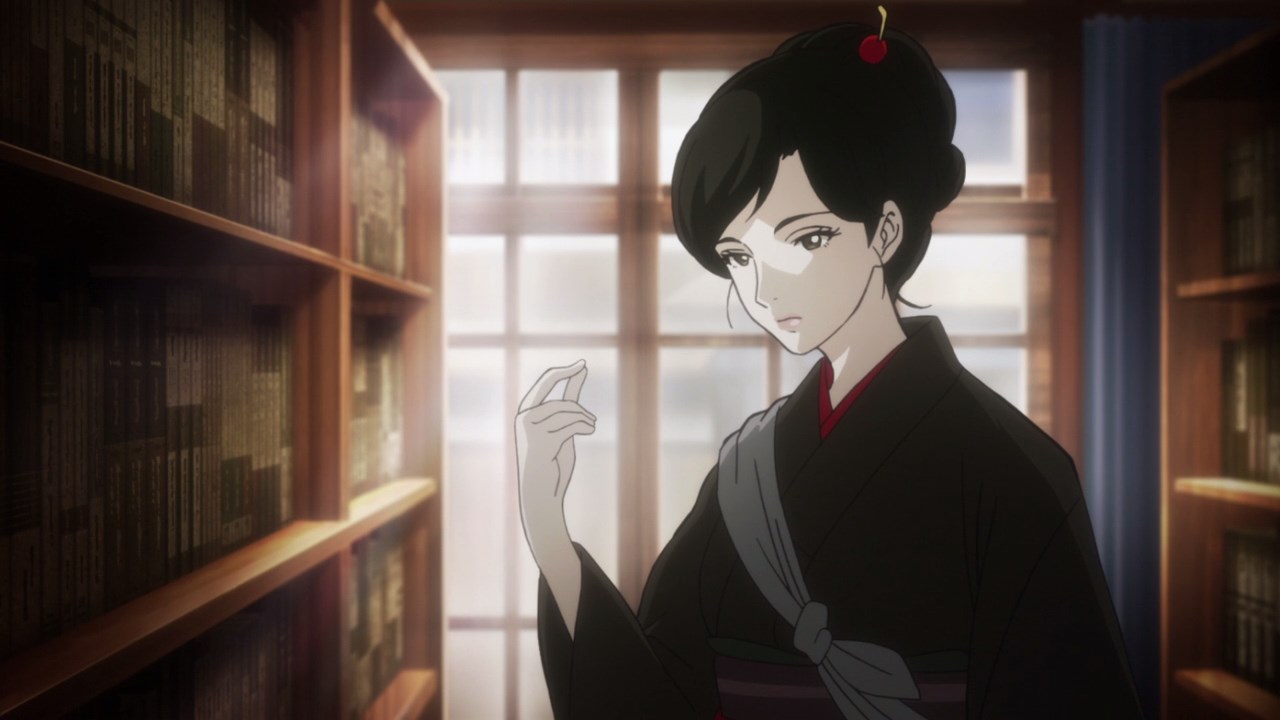 Now then, looks like Sawa Yukimura returned to Tokyo safely as she went back to the Morning Dew Bookstore, although this place needs some cleaning. 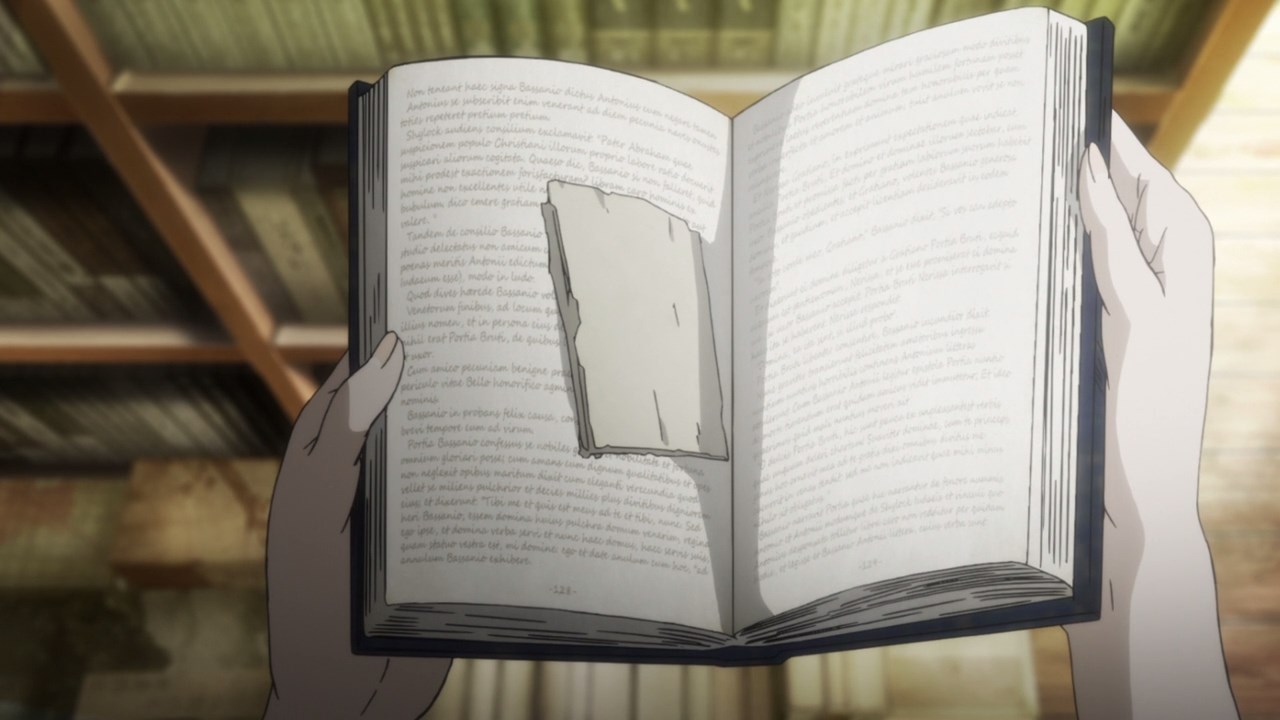 On the other hand, Sawa stumbled upon a book titled “The Merchant of Venice” in which she found a piece of paper between the pages.

Hmm, I have a feeling that Makoto Tsukishiro managed to put one of Kyouko Shimozono’s secret notes inside this novel. 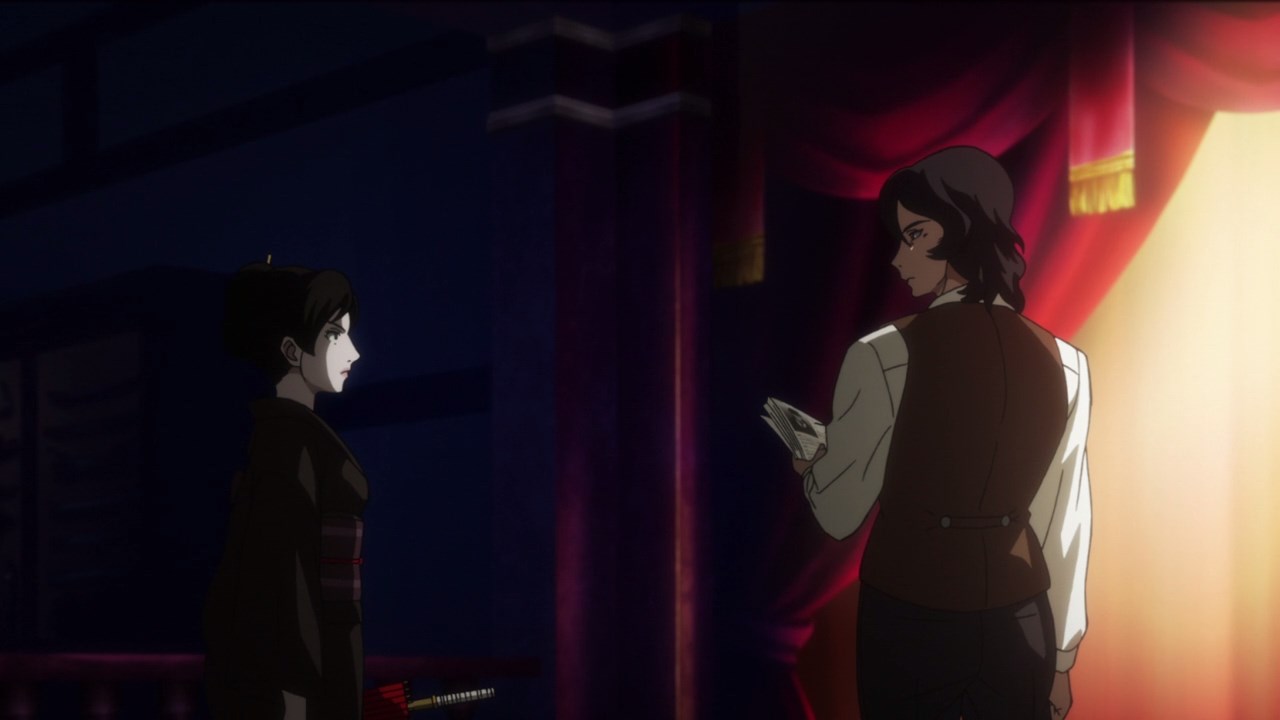 Anyways, Sawa Yukimura went to see Jin Kuzuhara, although she’s not keen on following his orders anymore upon reading the note. 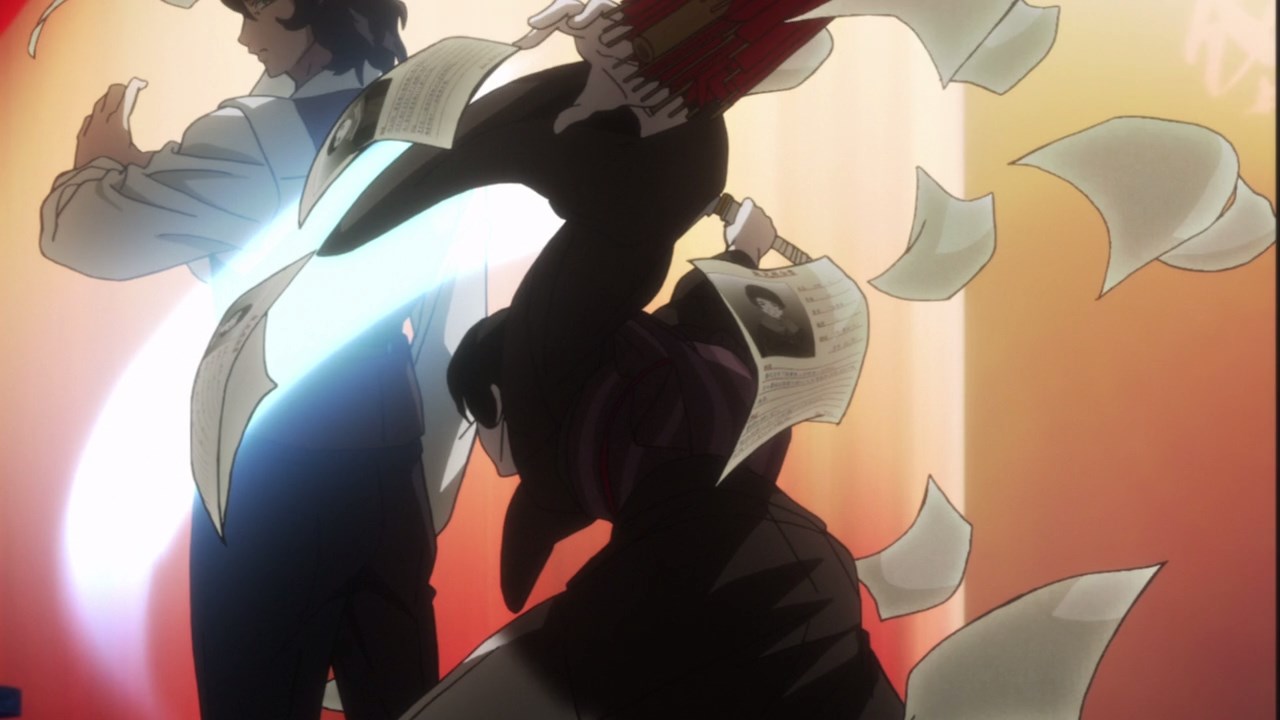 So, Sawa attacks her boss instead by slashing his back. Oh boy, I wonder why she decides to draw her sword against Jin Kuzuhara? 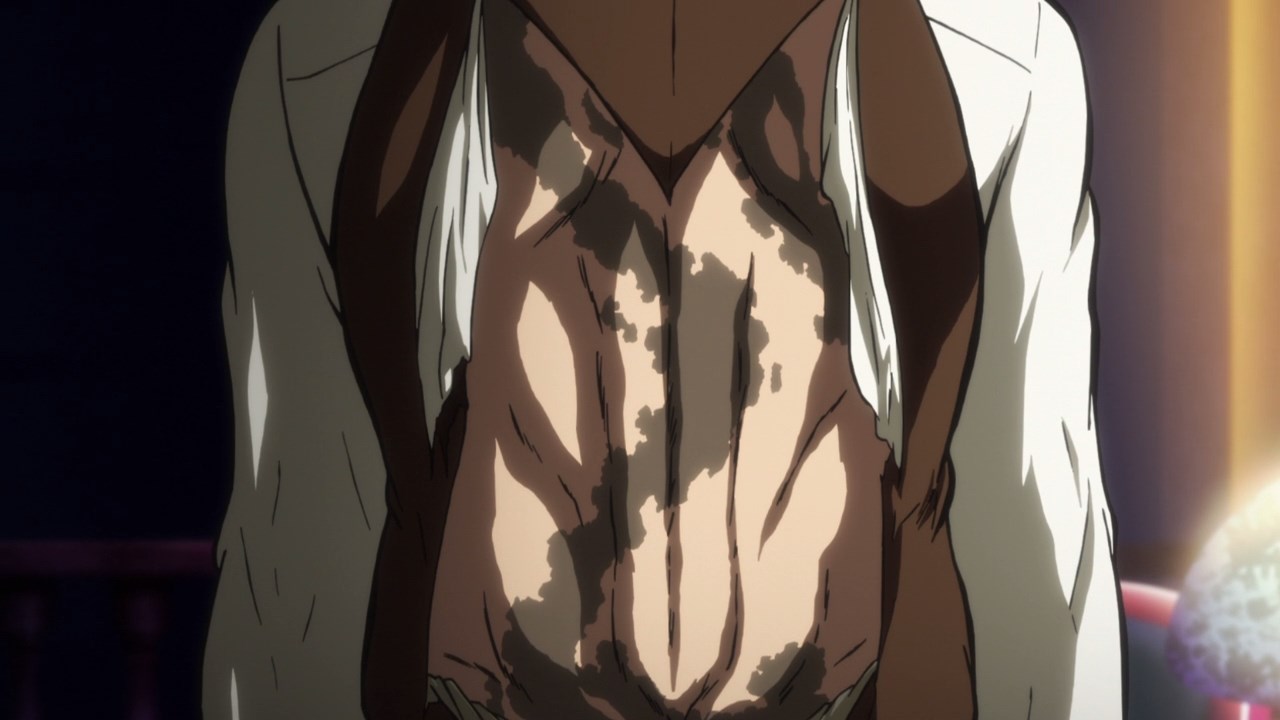 Oh, turns out that Kuzuhara has the same tattoo as Janome. I have a feeling that it’s not Janome who killed the entire Karasumori clan, but rather Jin himself.

In any case, tune in next time where Sawa Yukimura demanded more answers, although Jin Kuzuhara will have to stop his agents even if he has to become a Changeling himself.