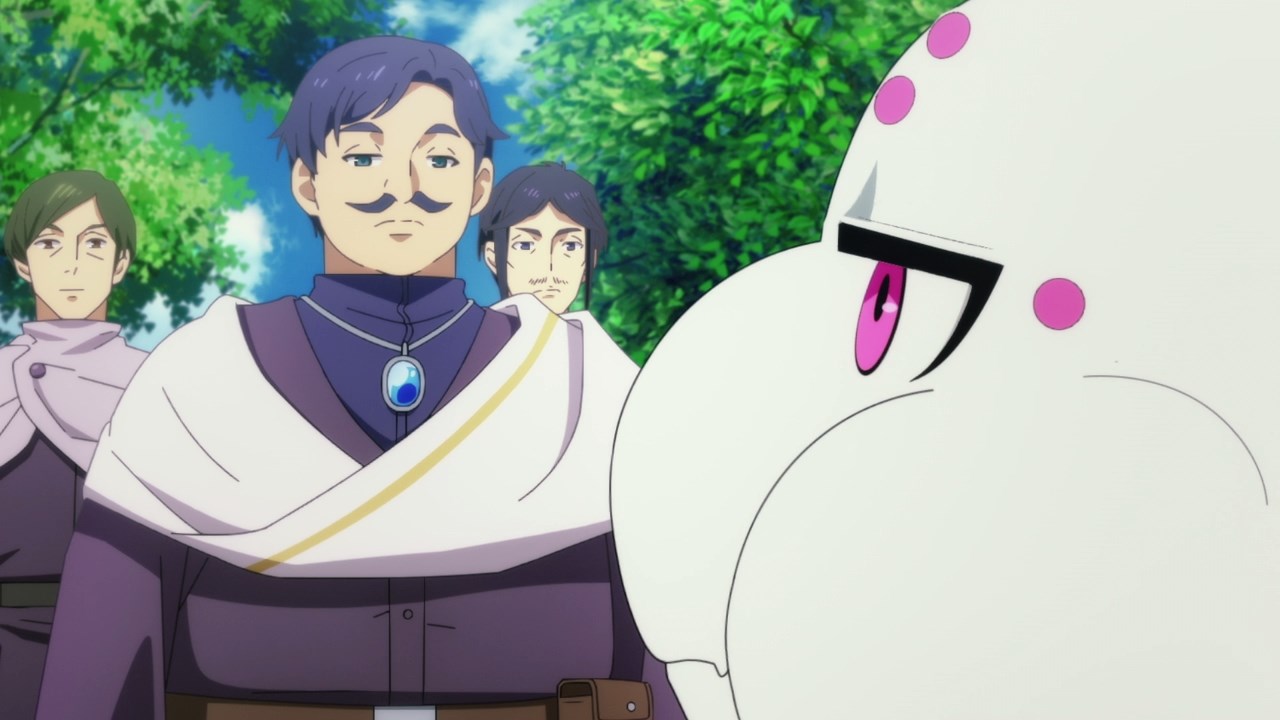 Oh look what we have here, it appears that a group of envoys from the Kingdom of Ohts are claiming the Nightmare of the Labyrinth as their own.

Oh wait, don’t tell me that these guys want to capture Ms. Spider because she destroyed a fortress? 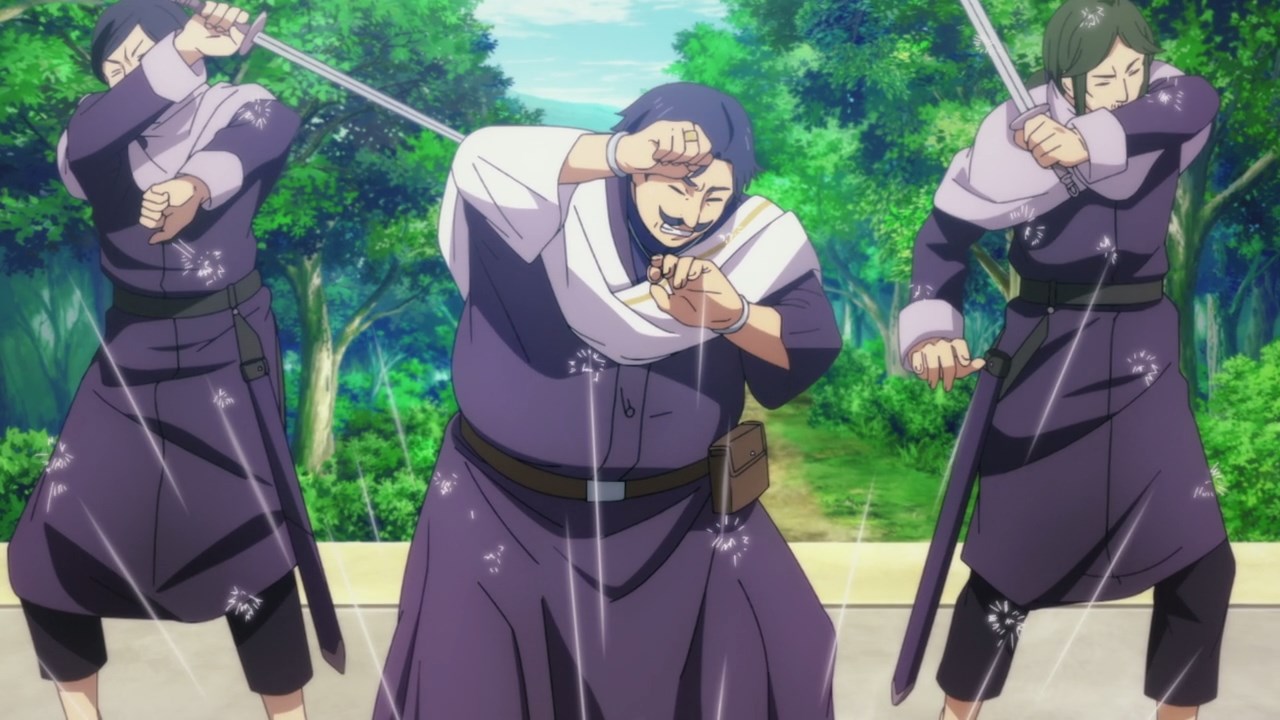 Not on her watch as Ms. Spider decides to retaliate… by spitting watermelon seeds at them. Of course, these envoys won’t give up on getting the Zana Horowa. 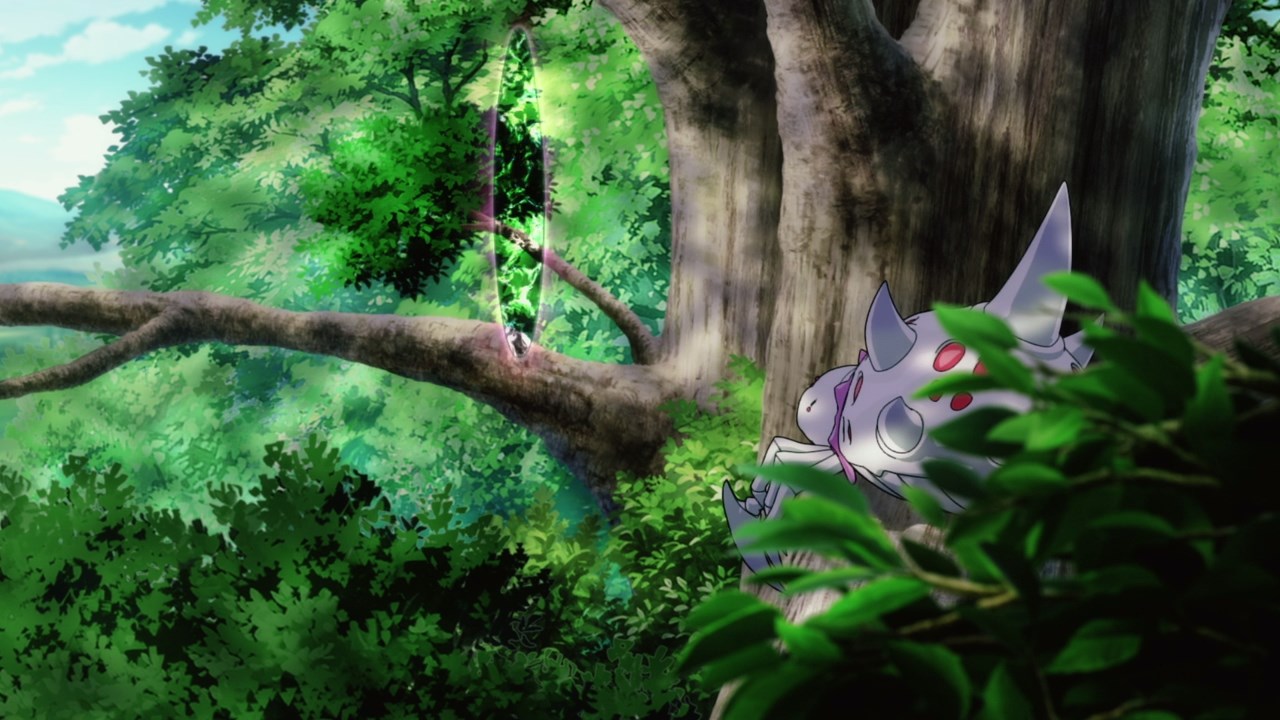 Meanwhile, it appears that one of the Administrator’s lackeys is here to talk to Ms. Spider through telepathy. 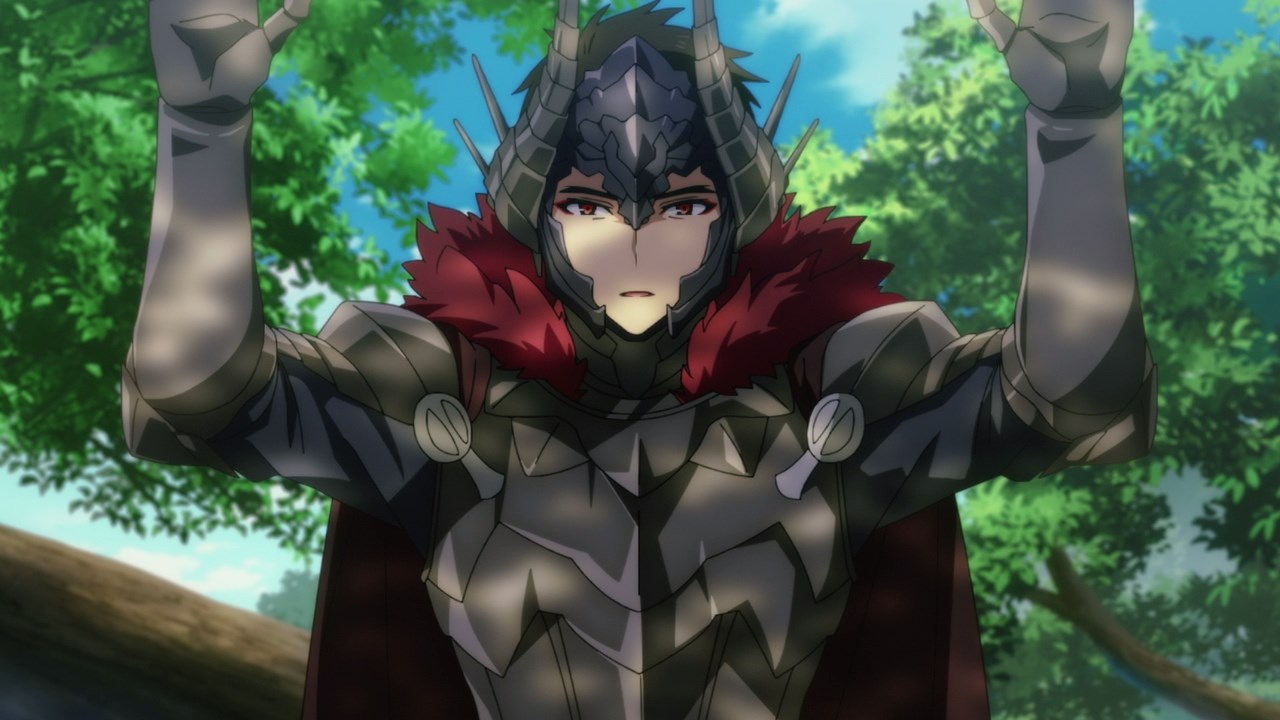 Anyways, this guy who previously appeared in Episode 9 is now named Gyuriedistodiez as he warned Ms. Spider not to fight against Ariel nor intervene on human affairs.

I have a feeling that Gyuriedistodiez is aware that Ms. Spider is very powerful to the point that her actions changed the balance of power. 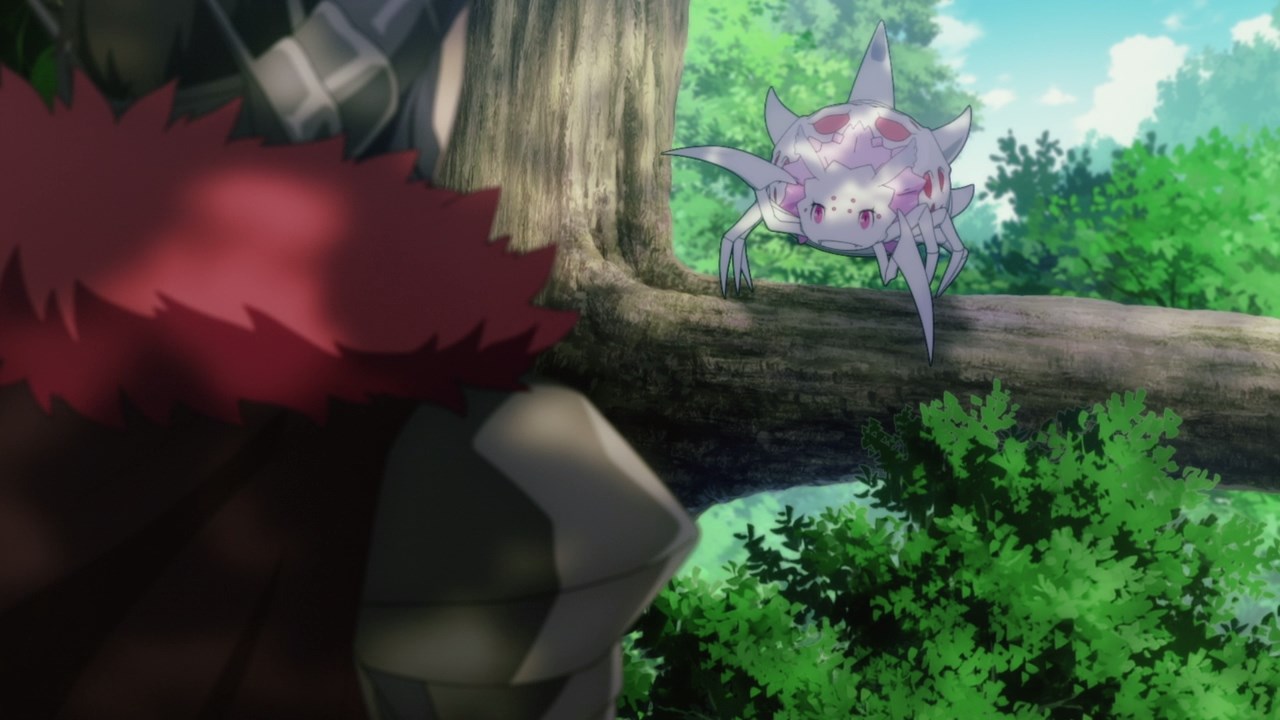 However, Ms. Spider refused Gyuriedistodiez’s request simply because for one, she can’t abandon Sophia Keren and two, Ms. Spider wants to save the world in her own way.

While he will have to stop Ms. Spider using some good old violence, Gyuriedistodiez decides to let Ms. Spider do her thing and thus he takes his leave. 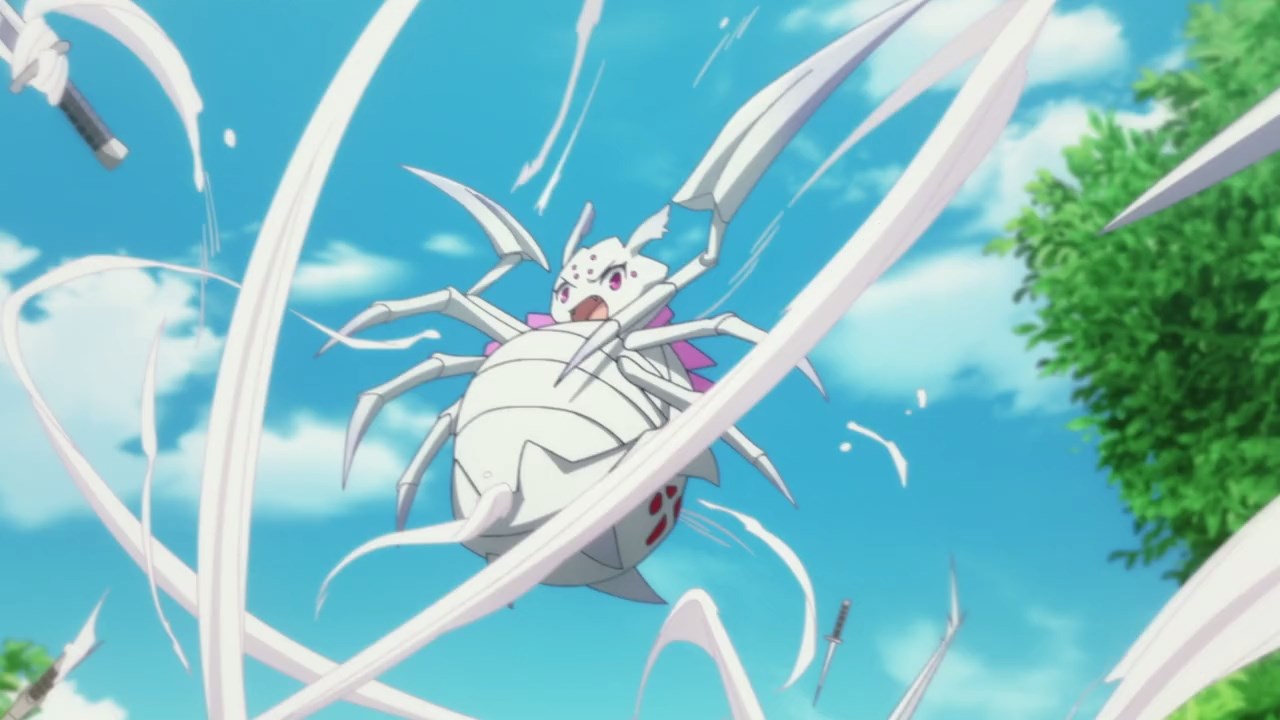 Then again, Gyuriedistodiez should have stayed a bit longer as someone tries to kill Ms. Spider. Good thing she managed to dodge it. 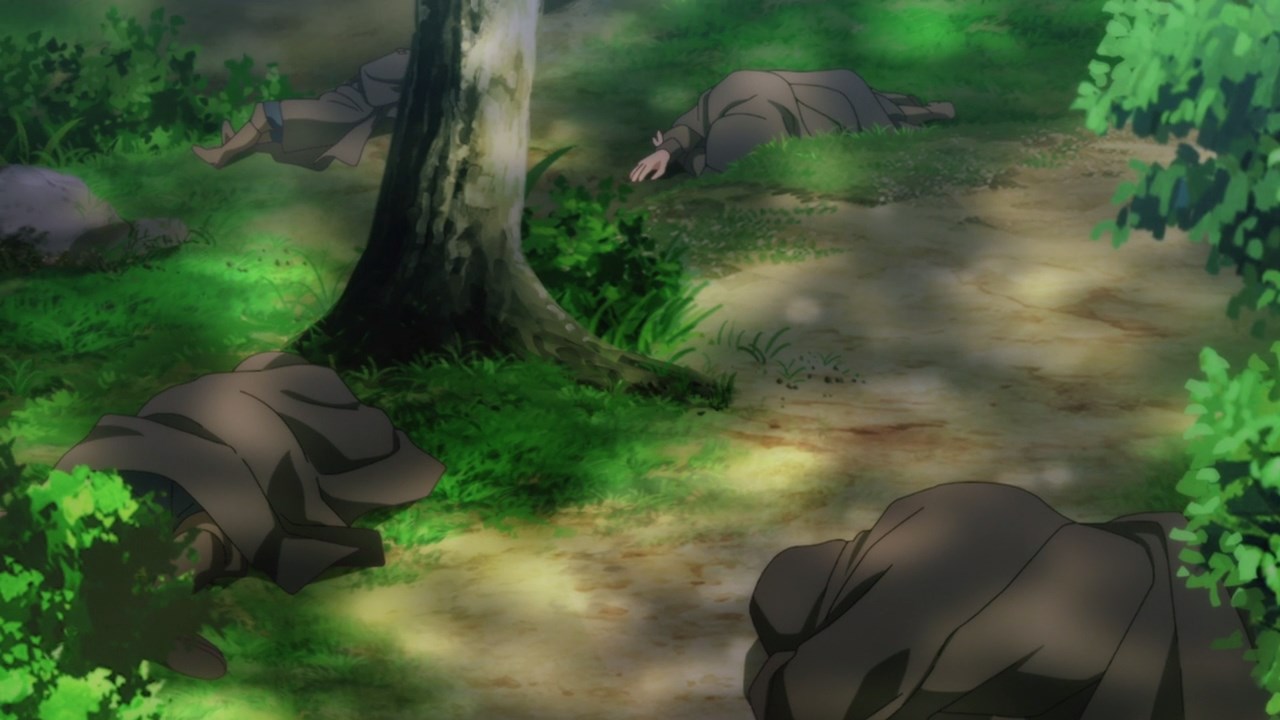 Not only that, but Ms. Spider used her evil eye to kill those assassins. I wonder if those elves have returned to not only kill Sophia Keren, but also Ms. Spider? 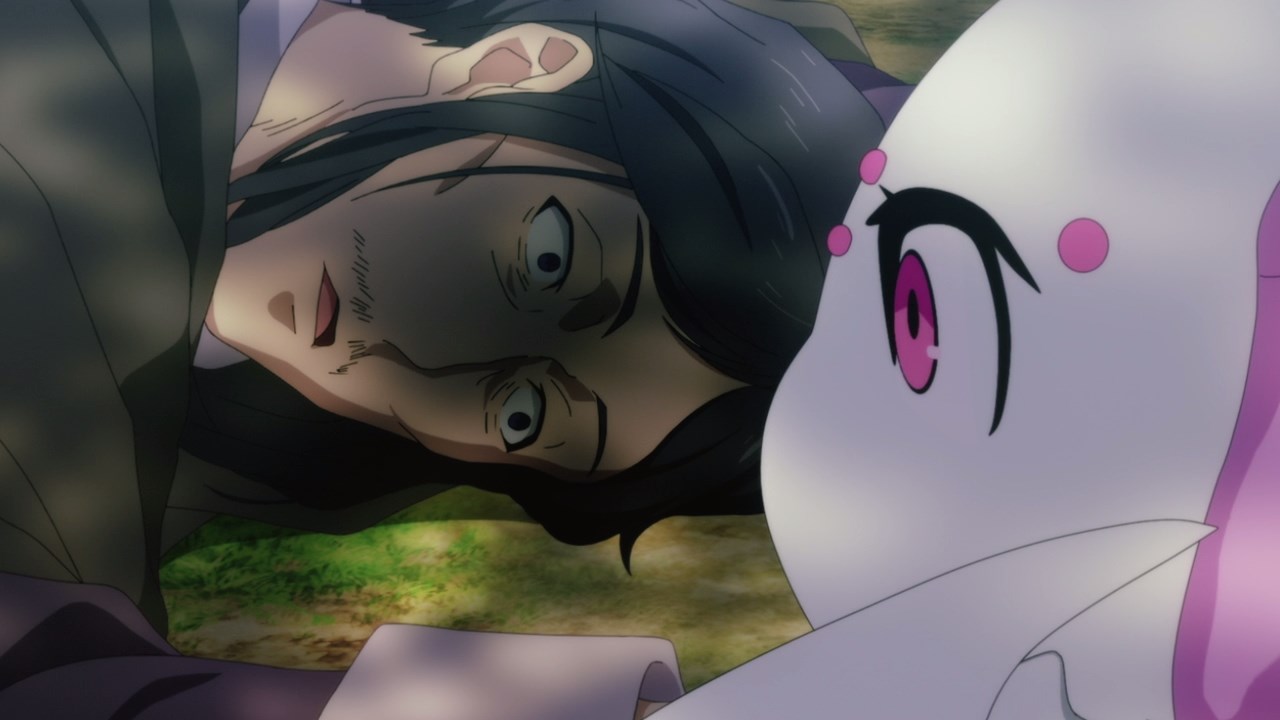 Oh, turns out that they belonged to the Kingdom of Ohts, meaning that the emissary plotted the assassination of Ms. Spider.

Well then, looks like Ms. Spider is really angry right now as she’s gonna kill that fat bastard of an emissary. 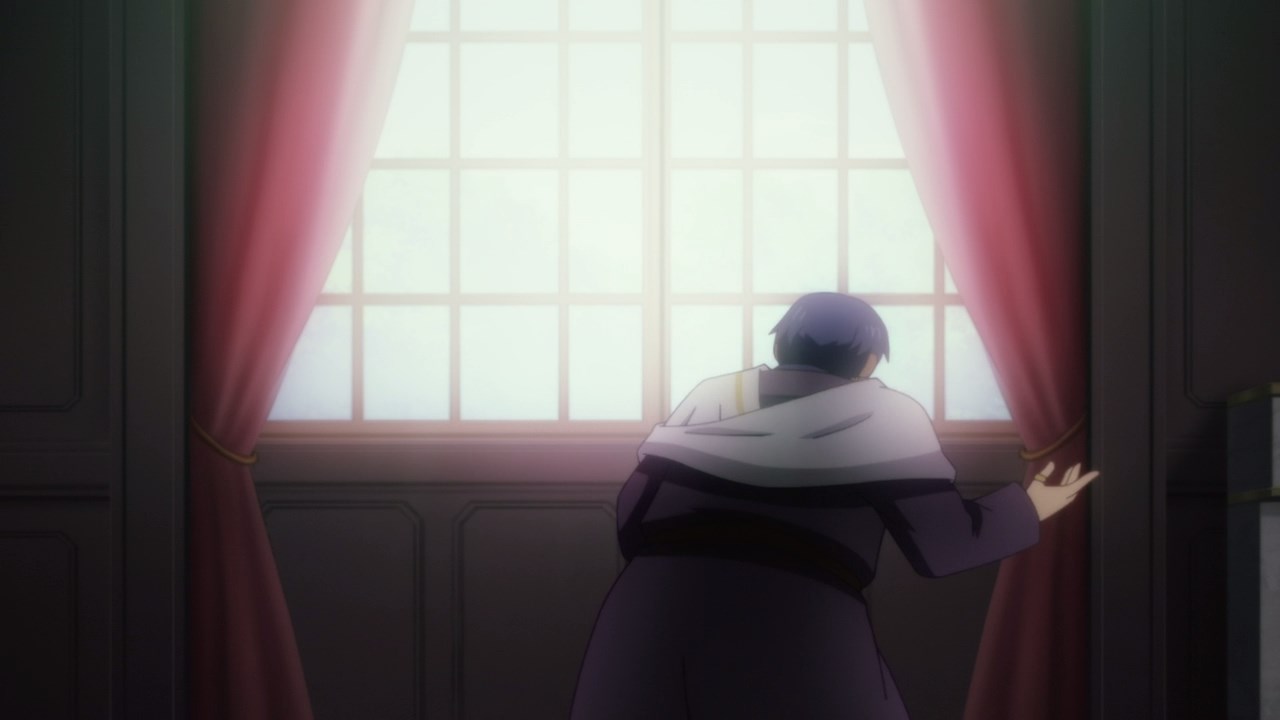 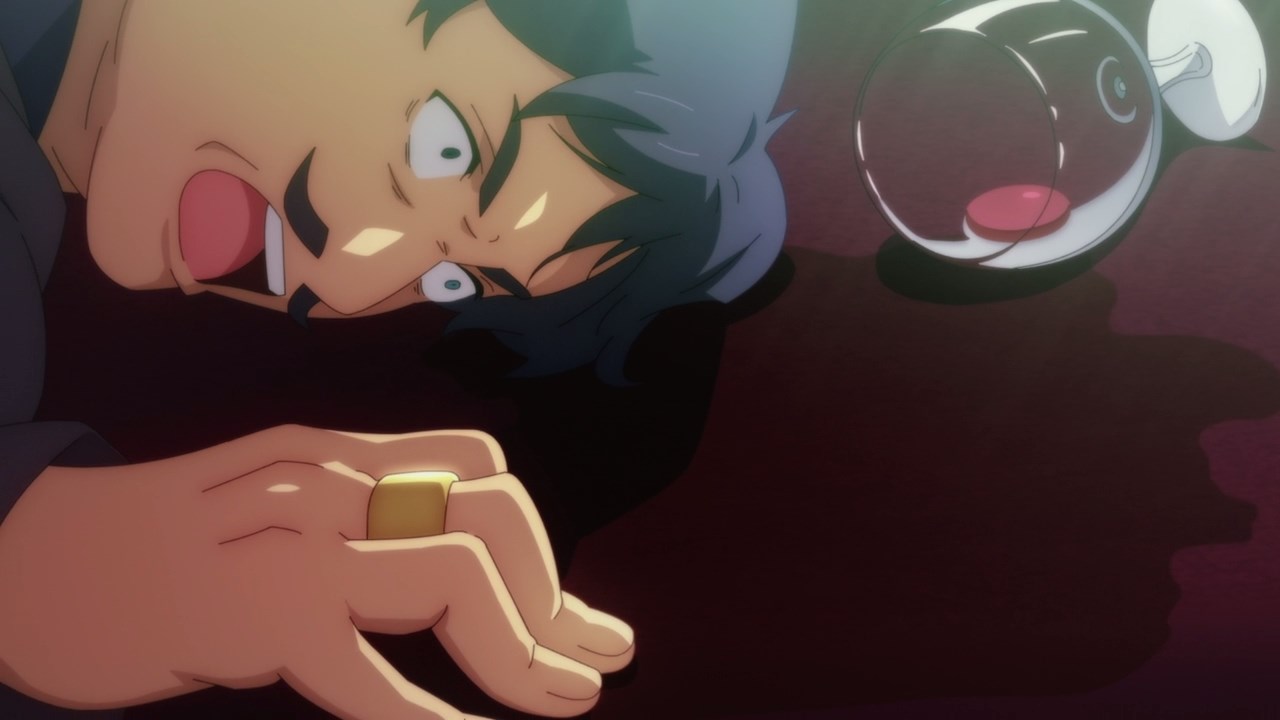 And she’ll do it via a Death No- Oh wait, her evil eye as this emissary got a heart attack and died. There goes his glass of wine. 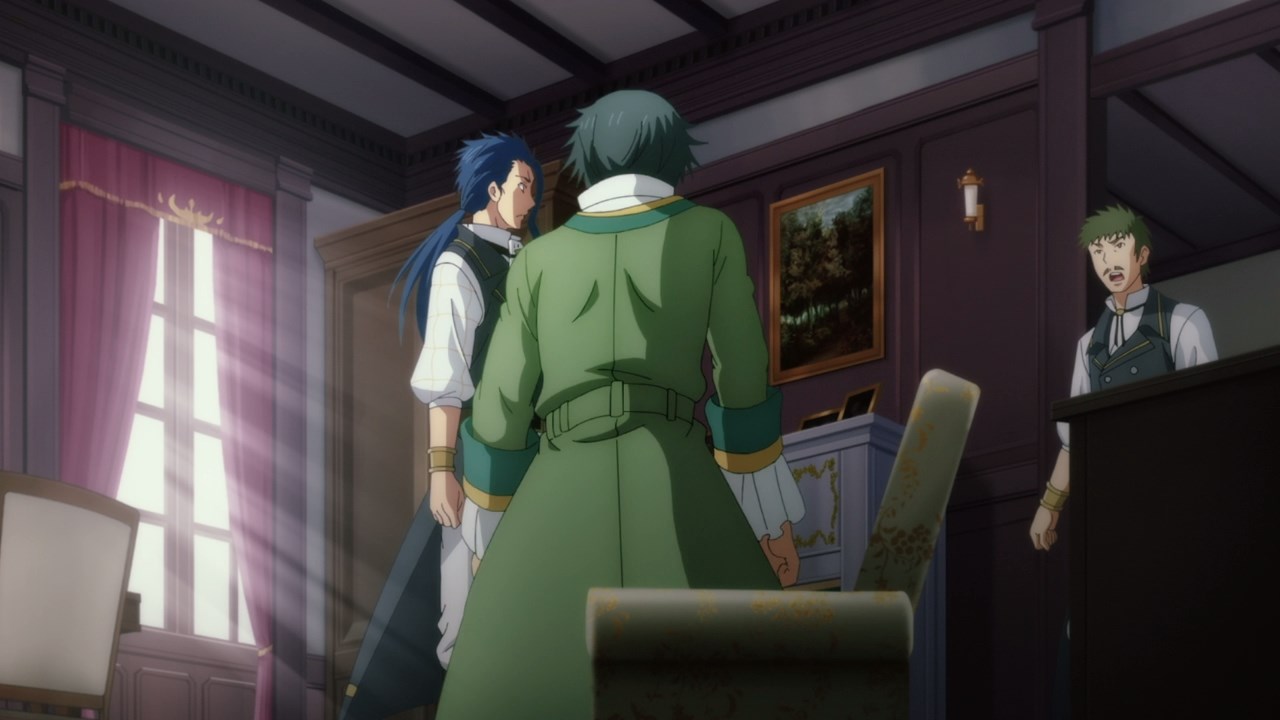 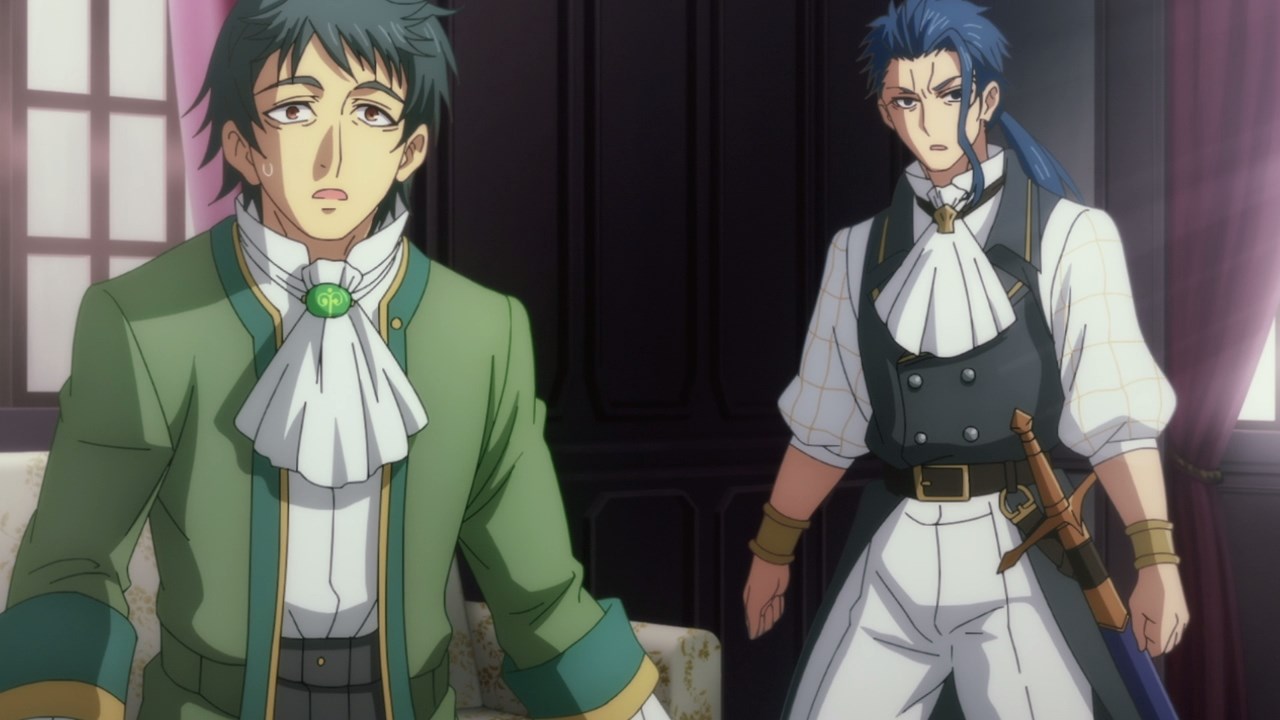 The next day however, one of John Keren’s envoys told him that the Kingdom of Ohts has declared war against the Keren County. Okay, Ms. Spider’s action made it worse. 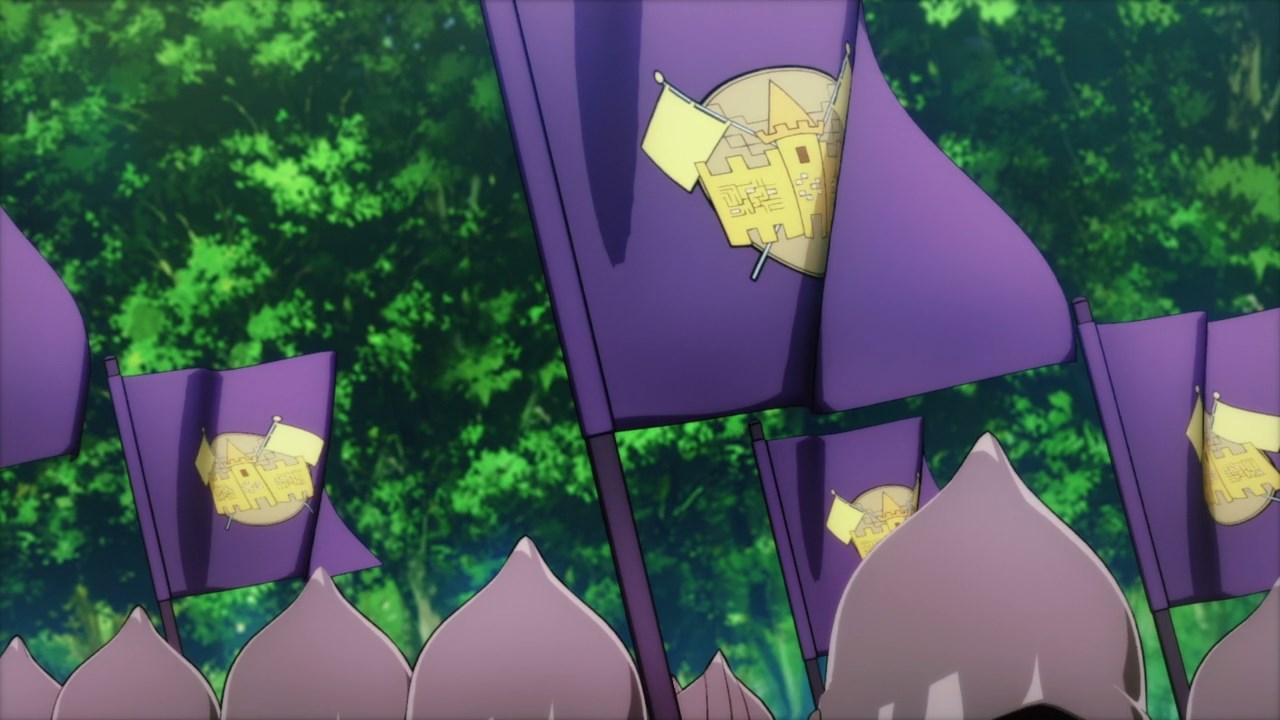 But you know something, I have a feeling that the Kingdom of Ohts really wants to conquer the Keren County regardless of whether they capture the Nightmare of the Labyrinth or not. 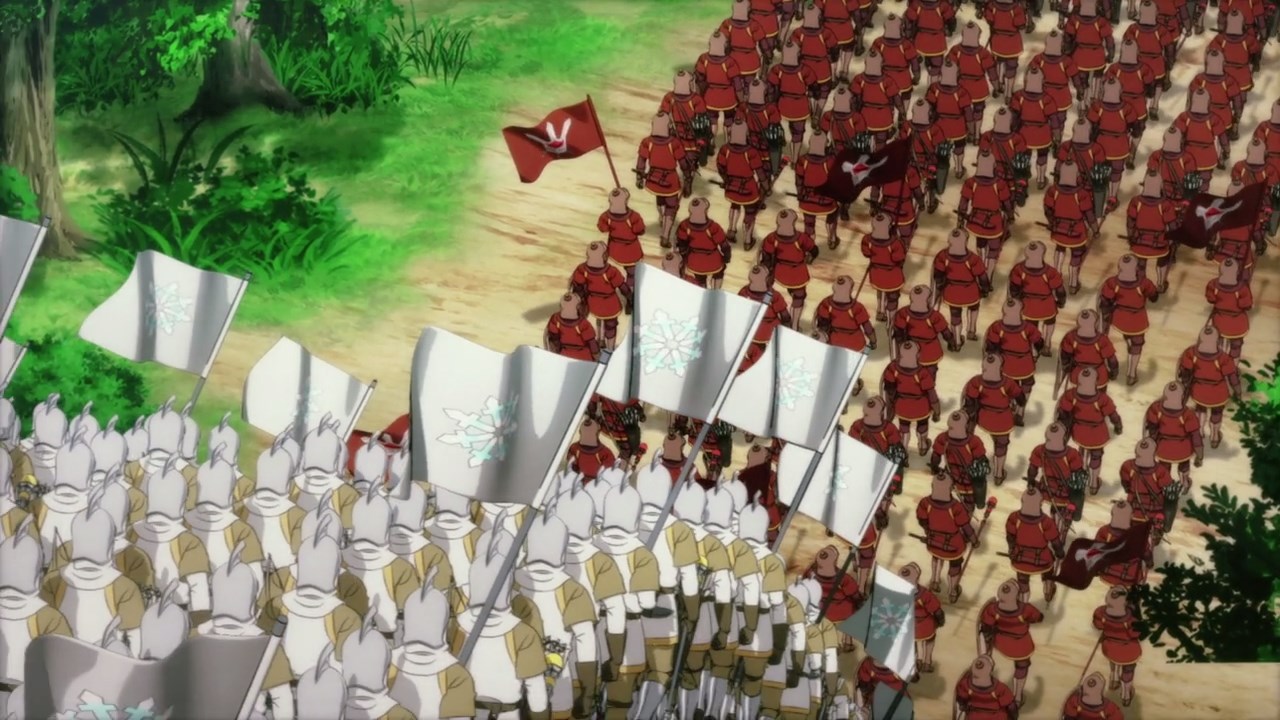 Of course, it gets even worse when both the Renxandt Empire and the Holy Kingdom of Alleius have joined the Kingdom of Ohts for a united front.

Man, they really want to overwhelm a small town just because a Zana Horowa killed one of their emissaries. 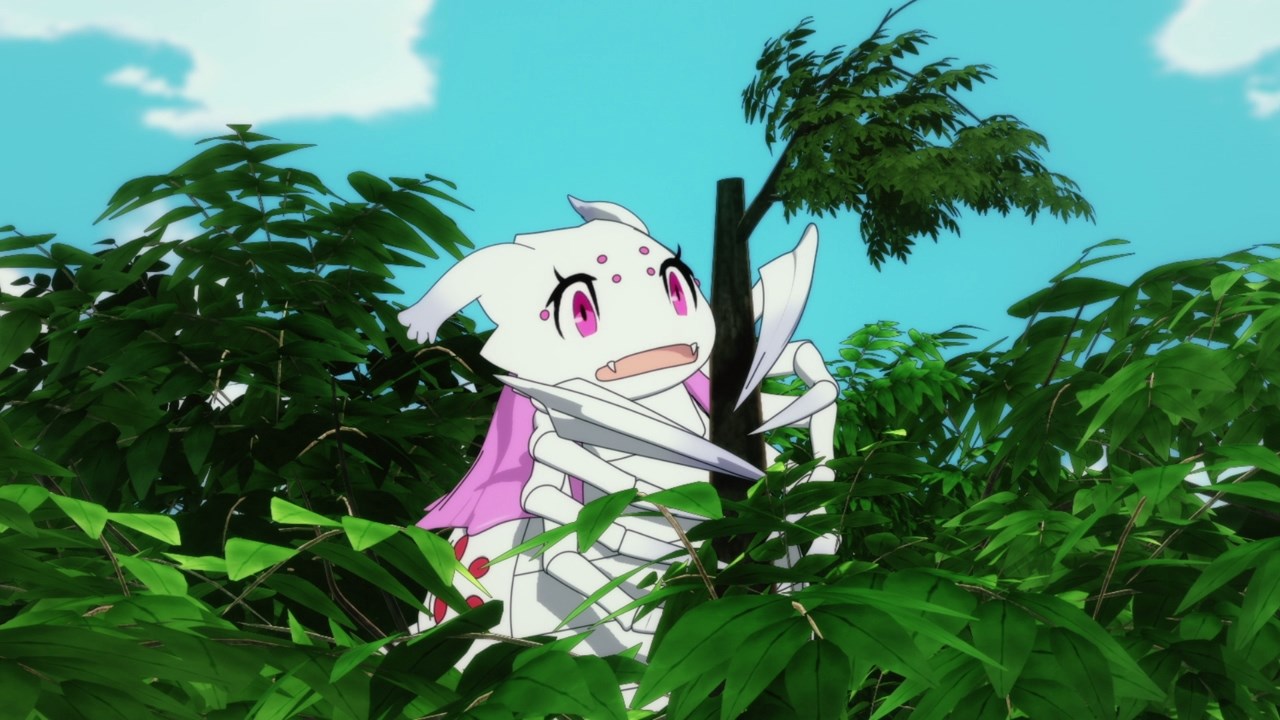 But as for Ms. Spider, she’s ready to deliver some ass-whooping against those puny humans as she’s hungry for experience points.

Well then, I have to say that the Kingdom of Ohts and its allies won’t stand a chance against the Nightmare of the Labyrinth, although I wonder how much will she gain as Ms. Spider needs to beat Ariel as soon as possible. 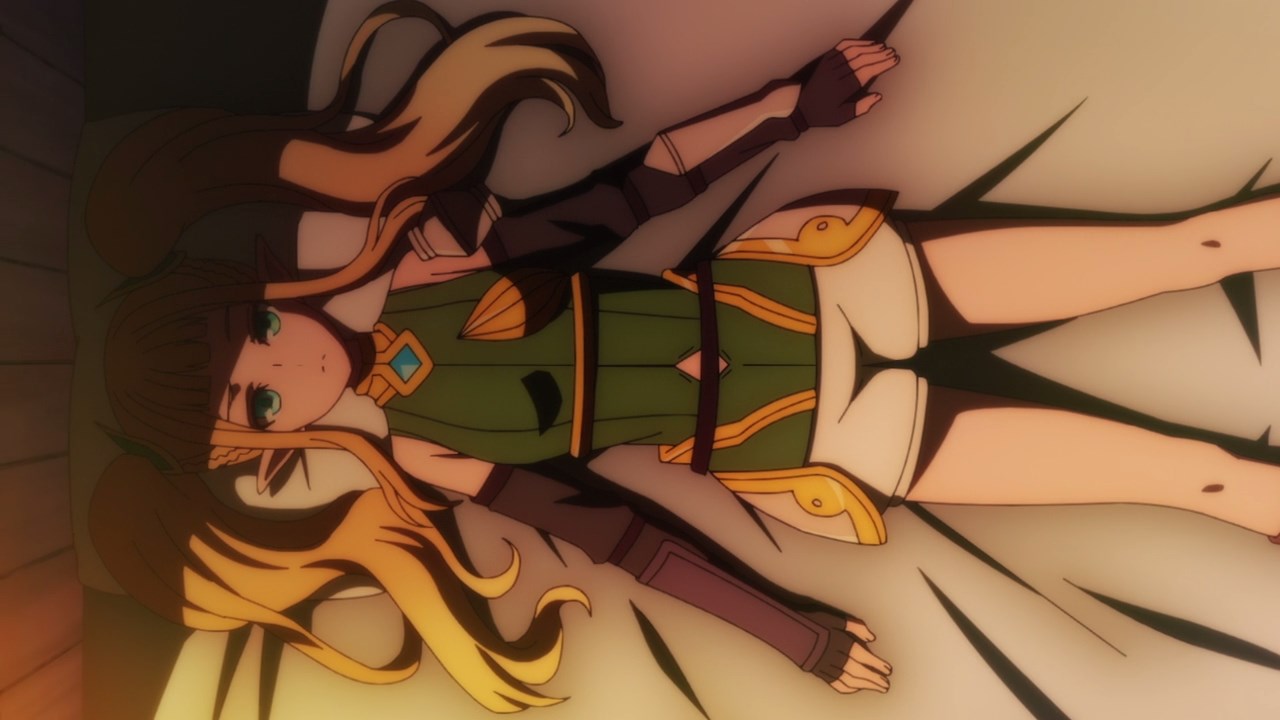 Now let’s go back to the present where Filimos is contemplating on whether to continue helping Potimas or save her students on her own.

Ever since the leader of the elves is revived on the previous episode, Filimos (or Kanami Okazaki) has some doubts in regards to Potimas ’cause he has some agenda against Dustin and Ariel. 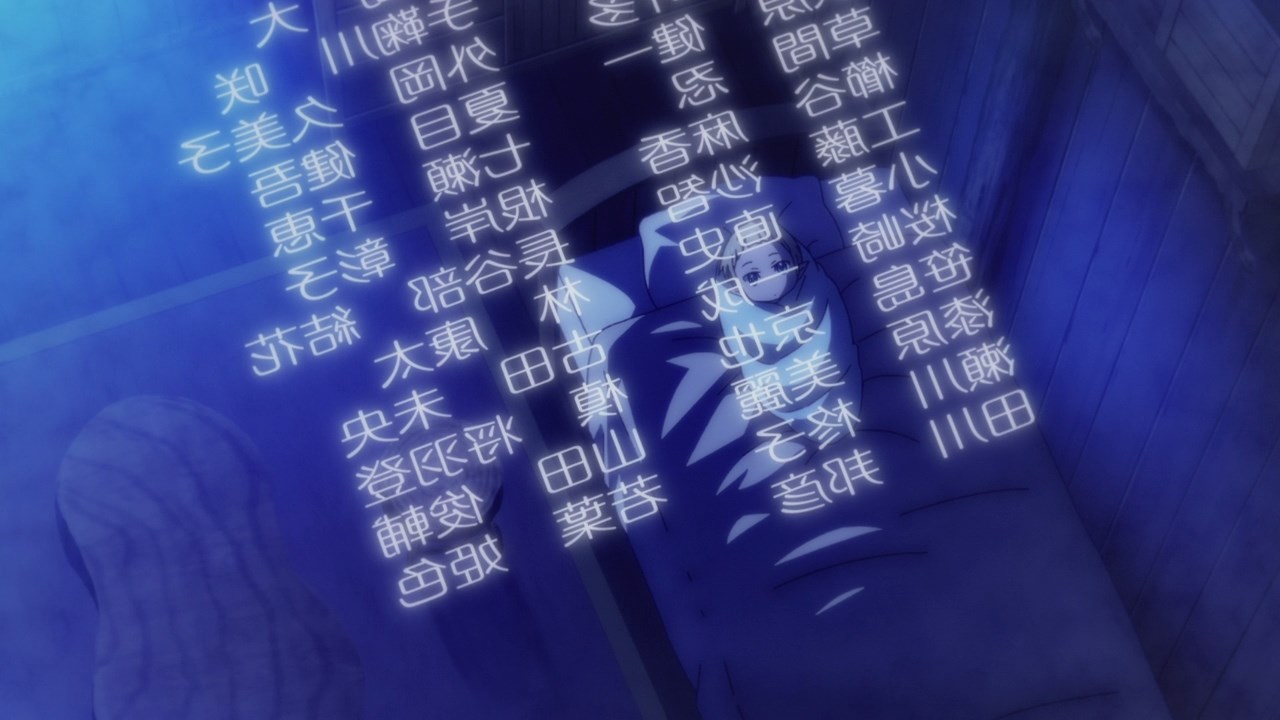 And speaking of Filimos, the reason why Potimas managed to capture some of the reincarnated beings is because she has an ability called Student Roster, which shows the fate of her students.

Of course, I have a feeling that Filimos really regretted it on sharing her ability to Potimas but come to think of it, I wonder if she knows the fate of Hiiro Wakaba ’cause there’s no way she would claim that Wakaba is dead? 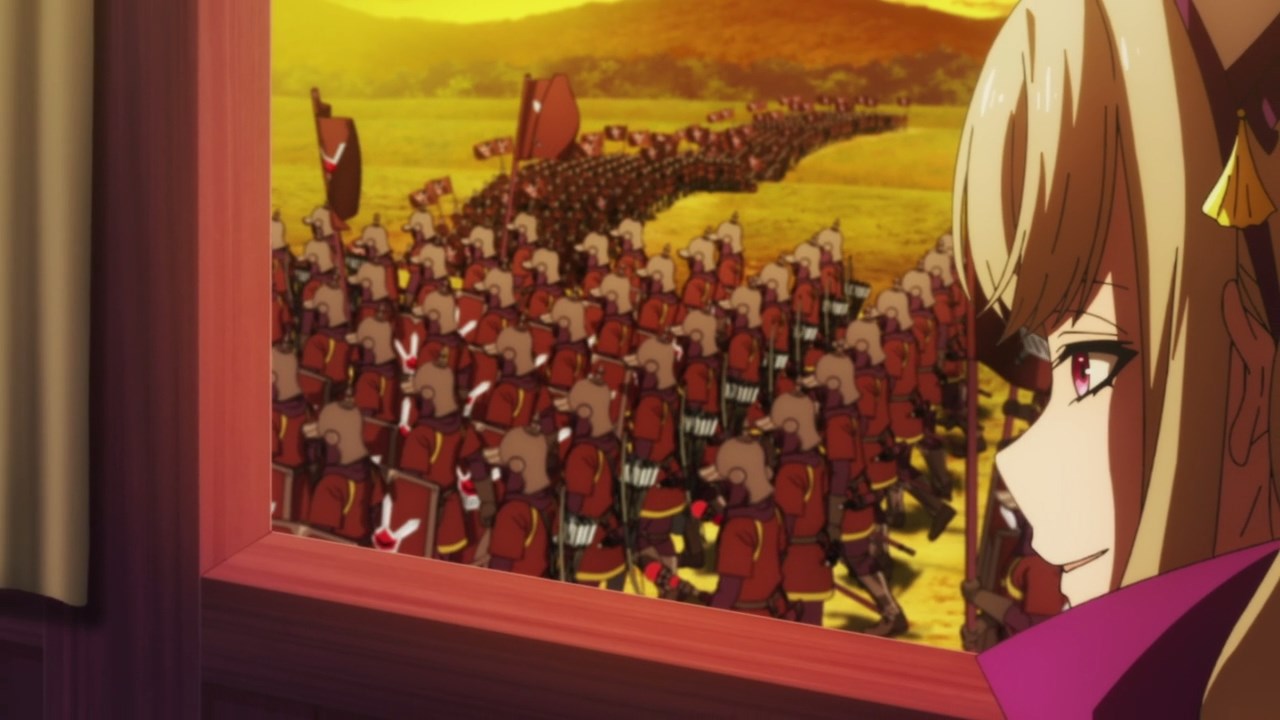 Now let’s end this episode where Hugo Baint Renxandt and his allies are marching towards the elf village. Come to think of it, this reminds me of those 3 countries attempting to destroy the Keren County and Ms. Spider, although I’m curious on its aftermath.

Also, here’s Sophia Keren where she and her demon comrades have joined in because they want to make Schlain Zagan Analeit suffer. We’ll find out next time on why Ariel targeted Schlain seriously.