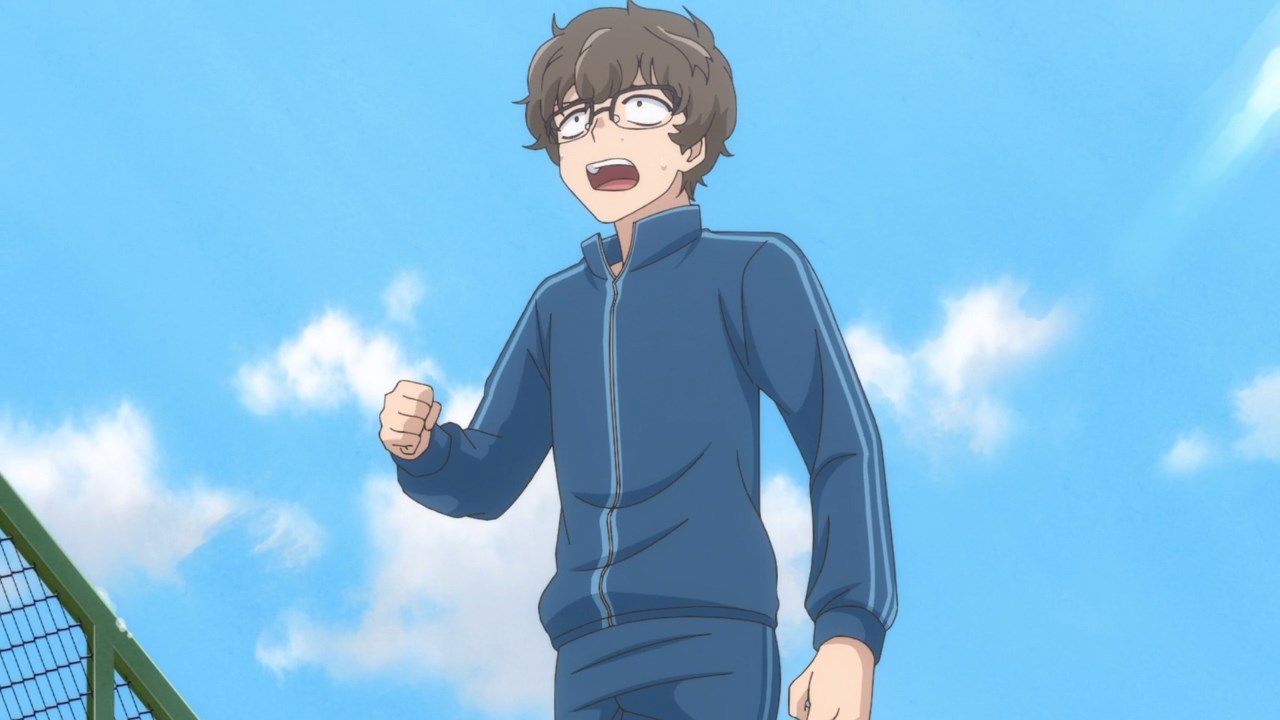 Let’s start this episode with the nameless protagonist where he’s struggling to run a single lap. You see, he’ll be participating in a marathon for which Mr. Sempai doesn’t like it. 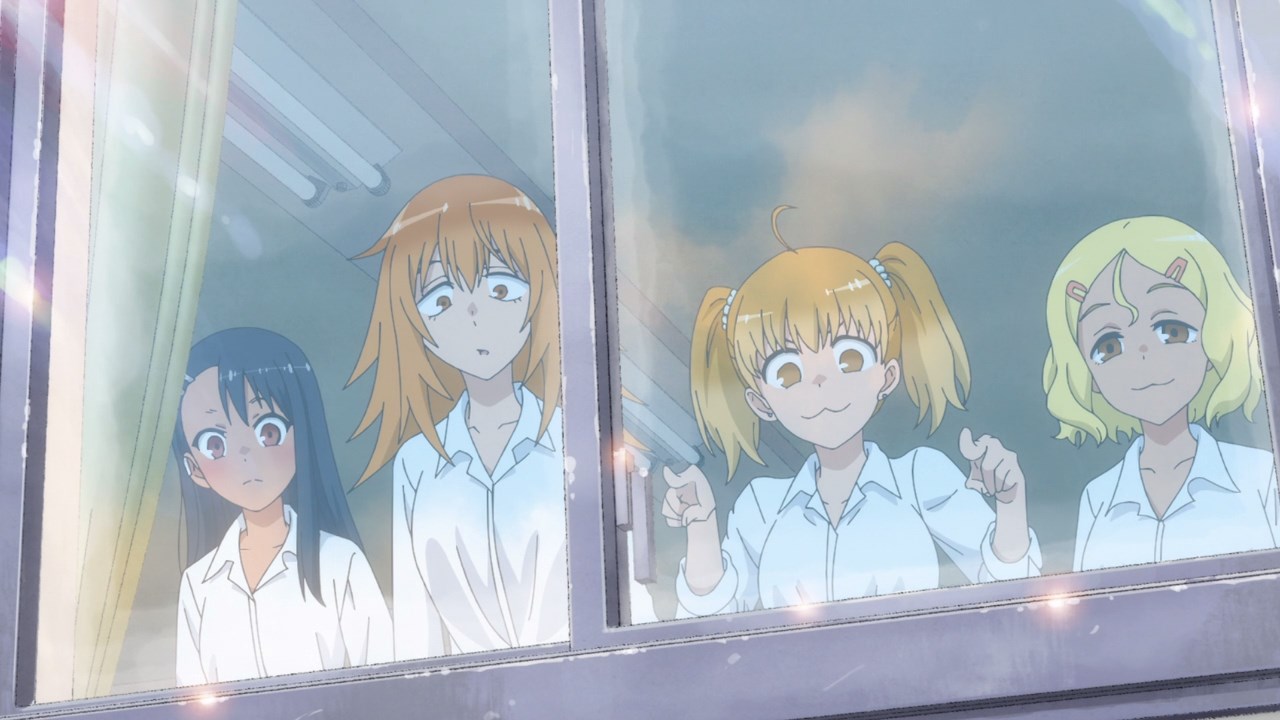 Oh, and here’s Hayase Nagatoro and her friends where they’re laughing at the bean-sprouted upperclassman for being lame as ever, although Nagatoro-san is really angry towards her Sempai simply because he’s lanky as hell! 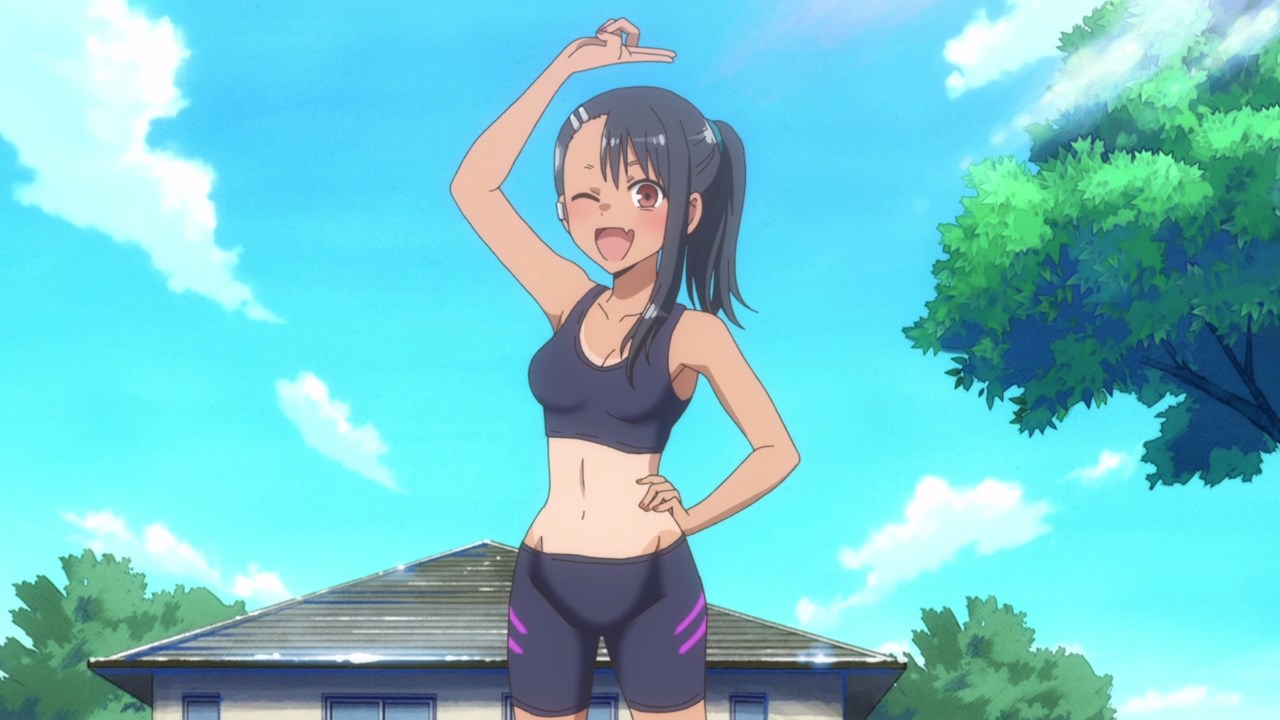 Therefore, it’s time for Nagatoro to train her nameless upperclassman until he can last the entire marathon.

And as you can see, she’s wearing some sports bra and spats, which I bet that Mr. Sempai is pretty motivated! 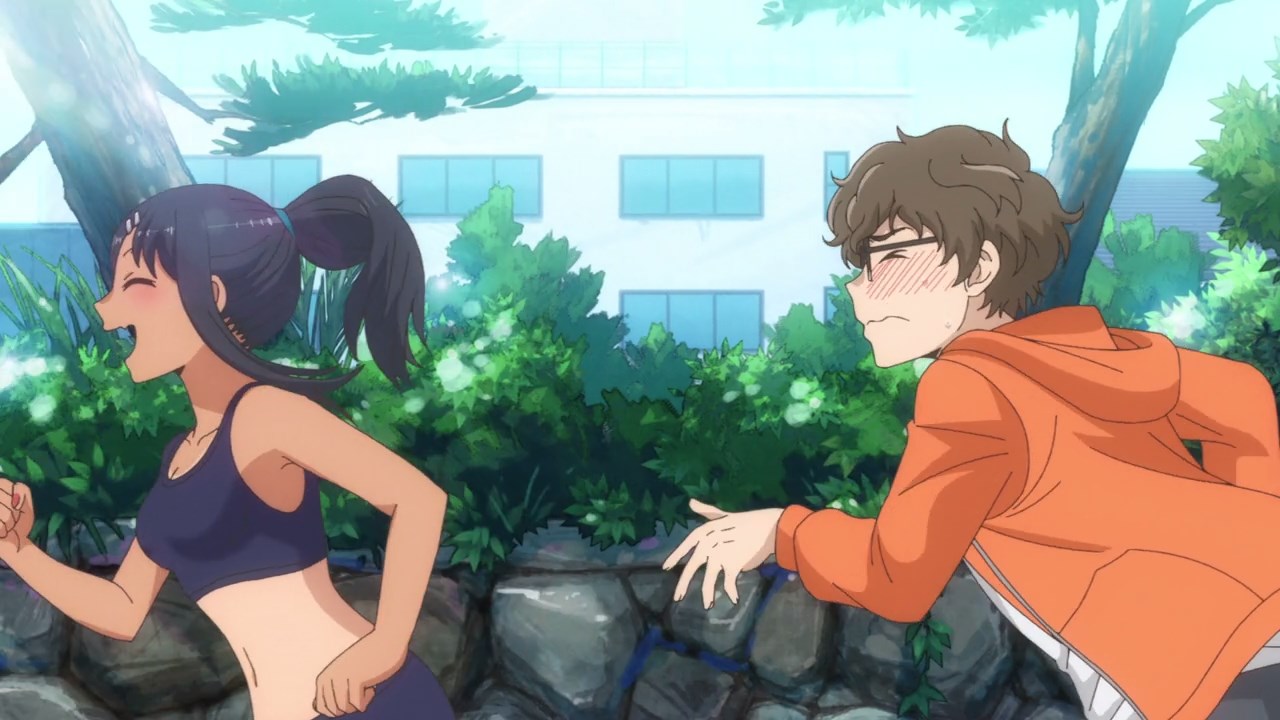 Ah never mind, he’s not that motivated enough as Mr. Sempai is lagging behind Nagatoro. I guess he’s not really the athletic type after all. 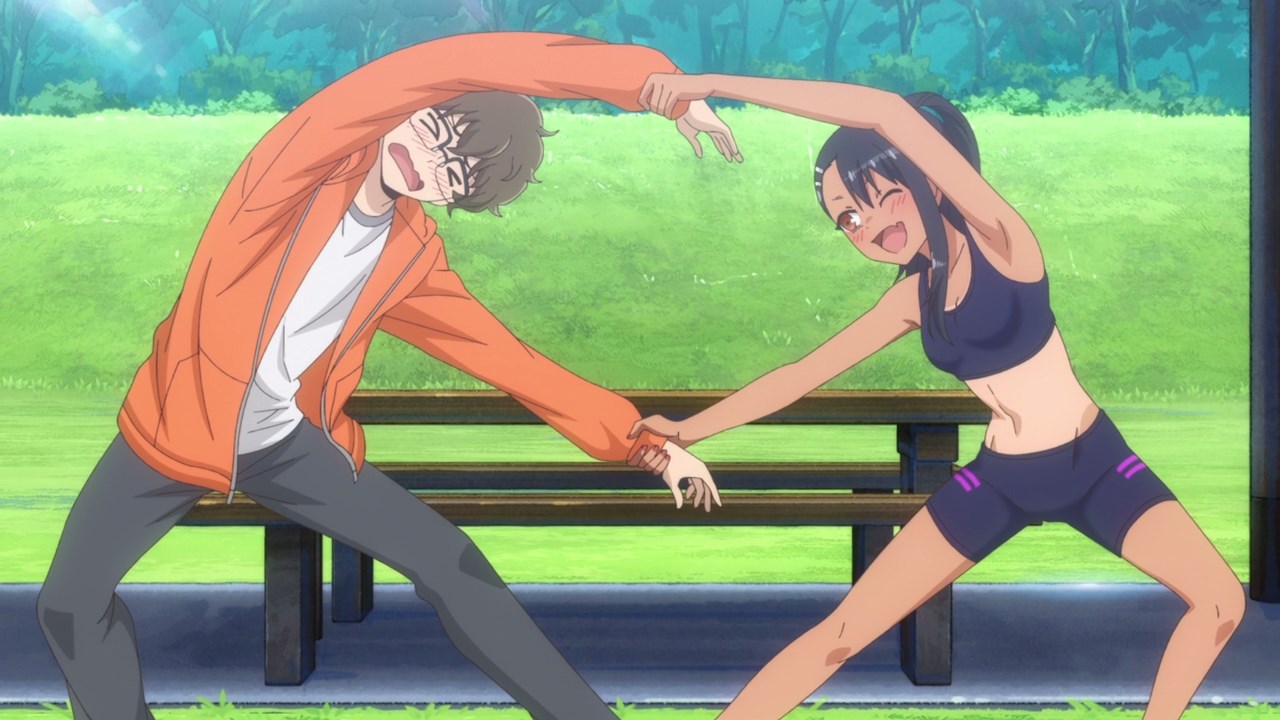 Then again, Nagatoro-san won’t give up on Sempai as she’s gonna train him hard until he can finish the marathon, aching muscles be damned! 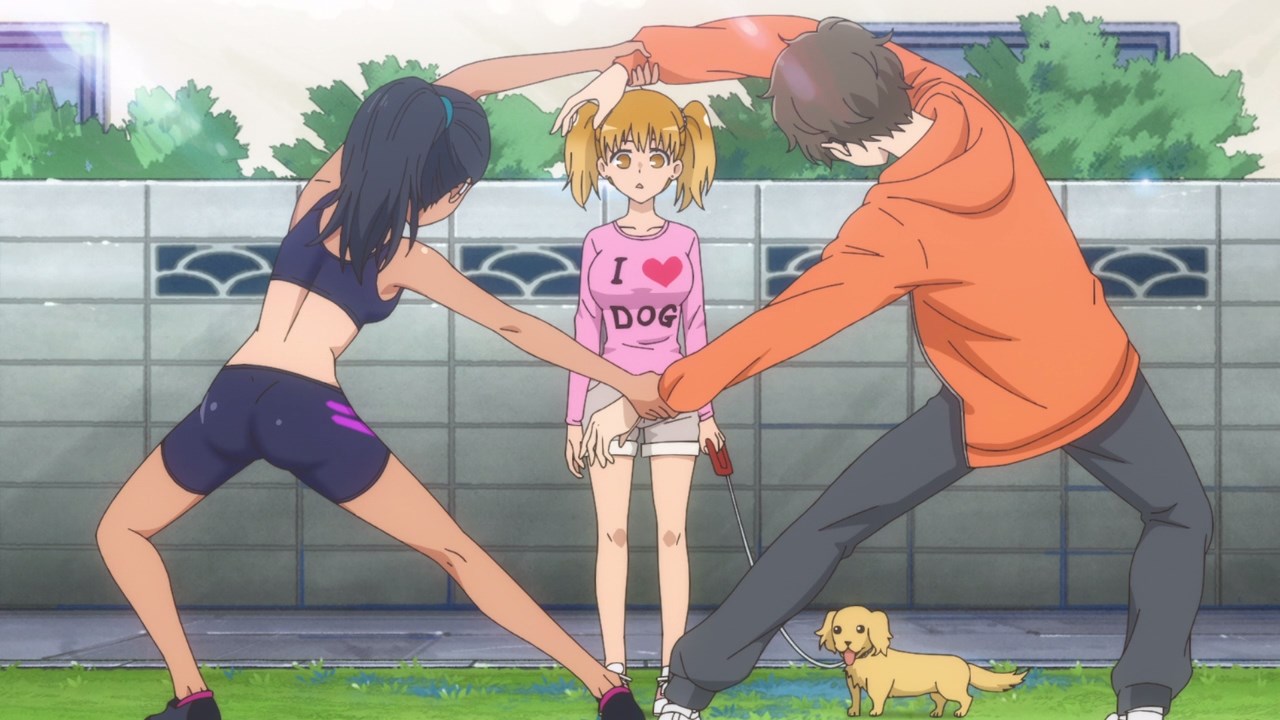 On second thought, I think they should train in secret as Yosshi saw them. Oh I bet that she’ll take a picture of both Nagatoro and Sempai.

Oh yeah, the marathon didn’t happen because it’s either that Sempai decides to sit out or there’s no time to show the marathon at all. 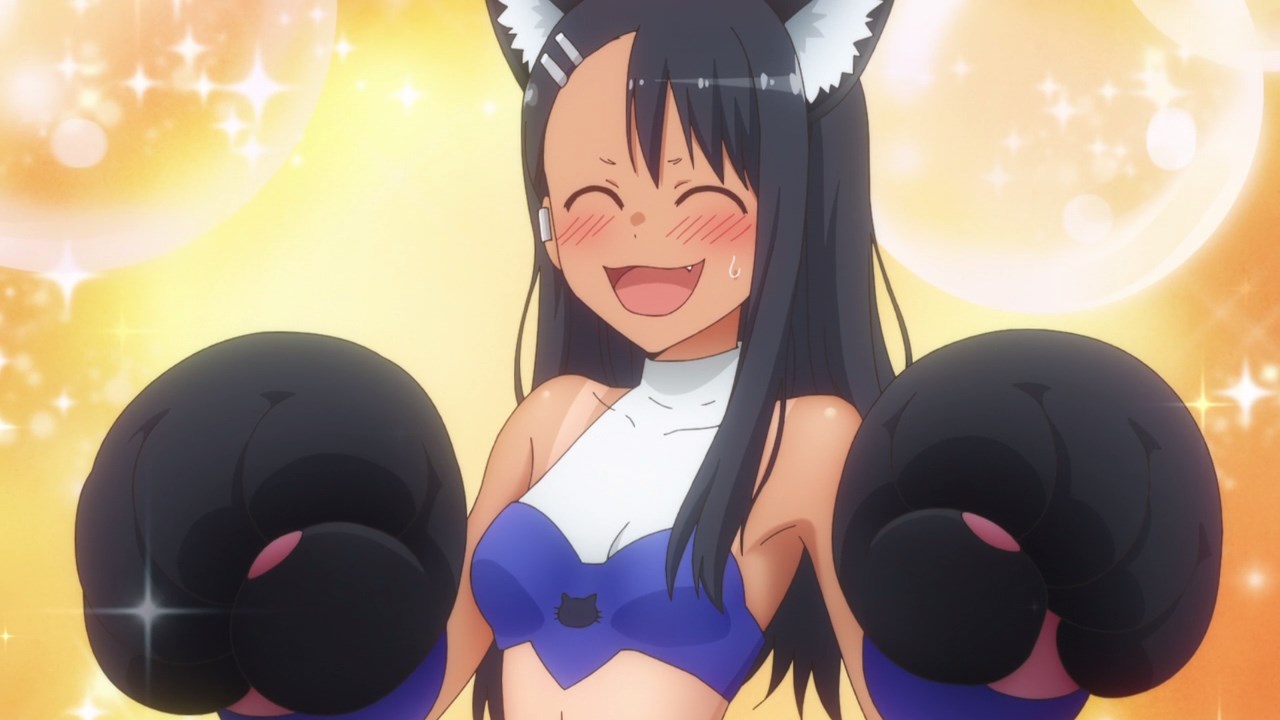 Now then, let’s move onto the next scene where Hayase Nagatoro shows her catgirl costume towards her nerdy upperclassman.

Originally, the catgirl costume was conceptualized by Mr. Sempai in which there’s no way it’ll be turned into a costume. However, the needlecraft club managed to make one for Nagatoro-san. 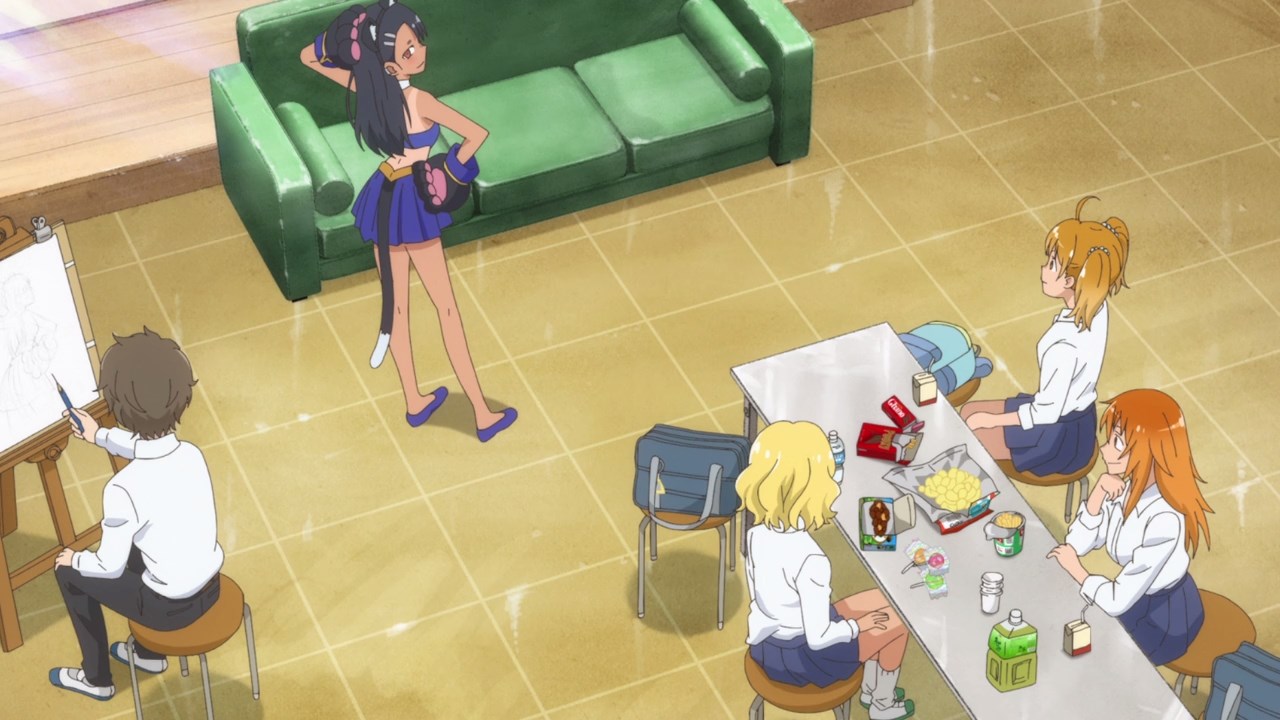 But yes, Nagatoro-san will become Sempai’s model for the upcoming school festival as the art club will host an exhibit.

Oh yeah, about the art club? Mr. Sempai is not the only member on that club. 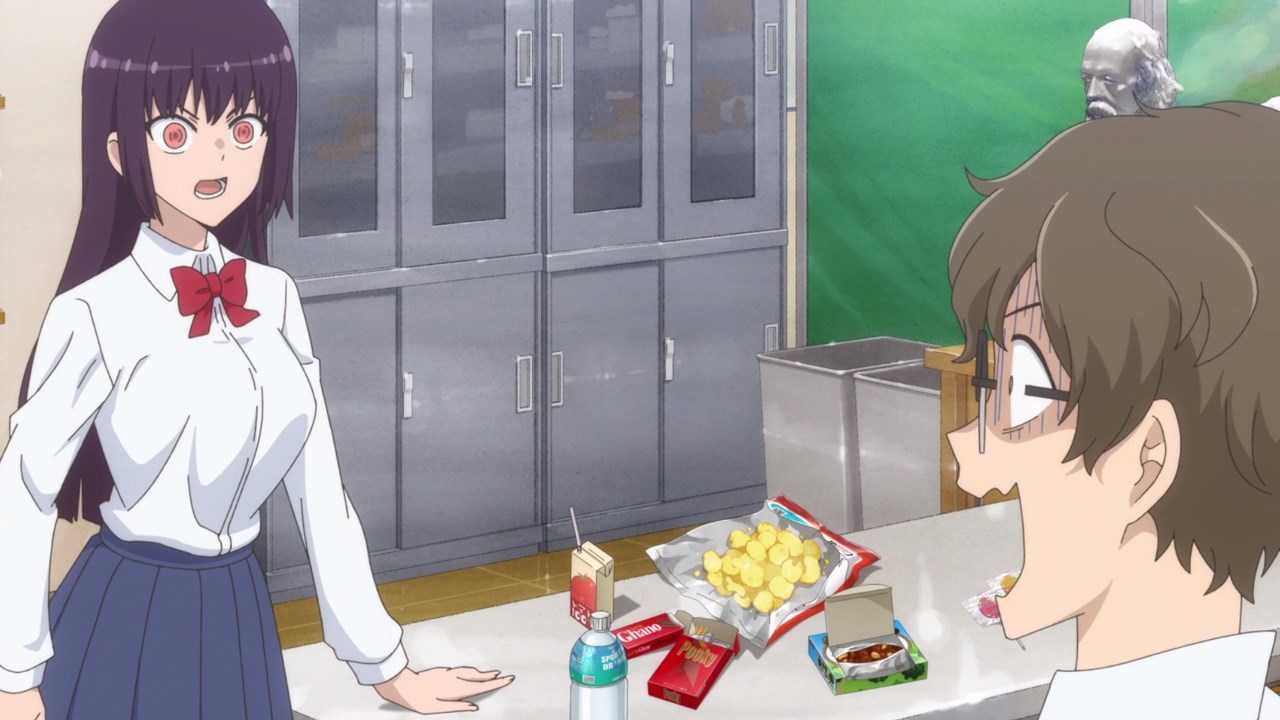 You see, there’s the club president where she heard rumors that the club room is being used as a hangout place.

You may blame Nagatoro and her friends for that one as they bring snacks and treat this room as some sort of student lounge. 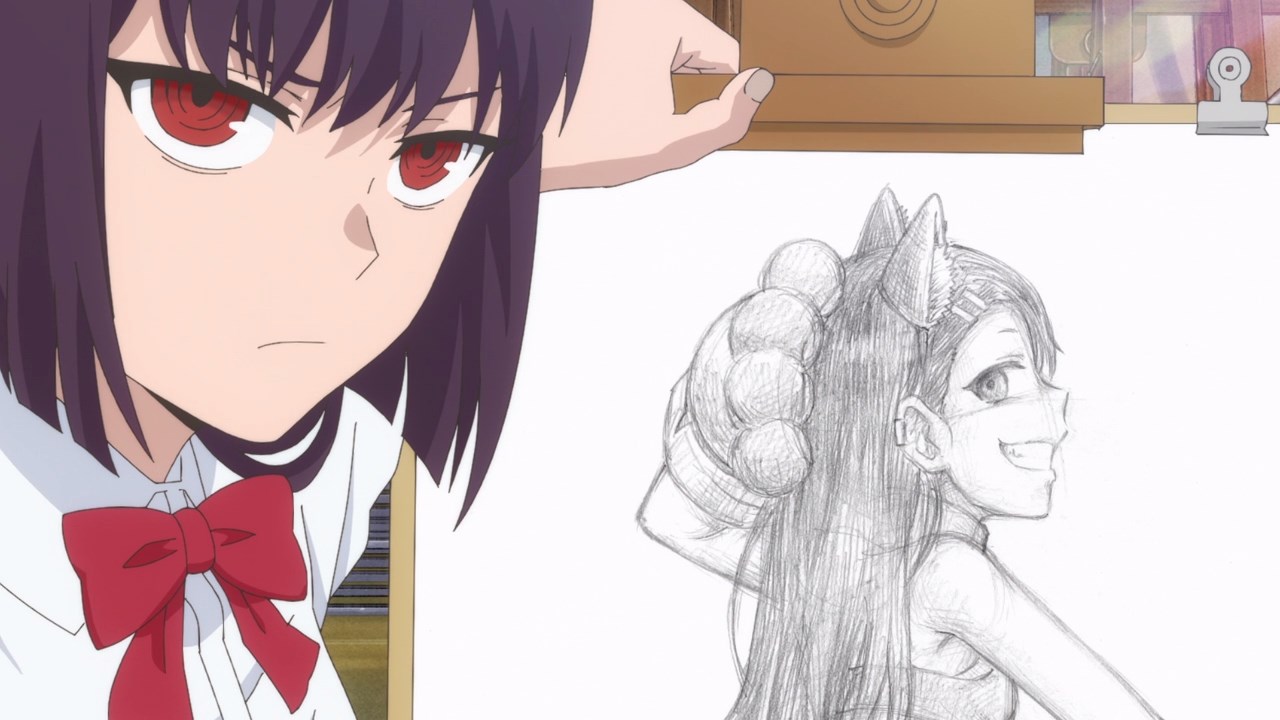 Regardless, the club president decides to shut down the art club as there’s no point of running it anymore. I mean, there’s one active member anyway. 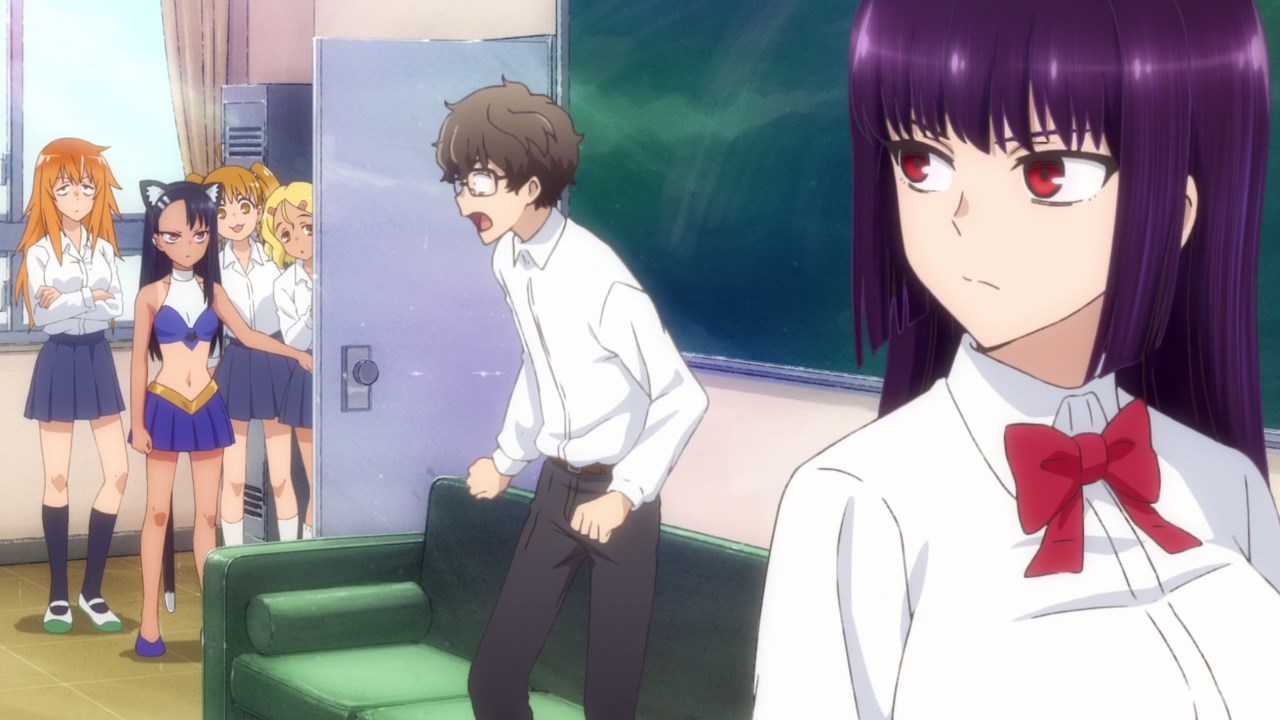 Of course, Hayase Nagatoro won’t let this club president shut the art club down as she’s finally appeared along with her friends. Um Nagatoro, it would be best if you apologize for loitering inside the club room. 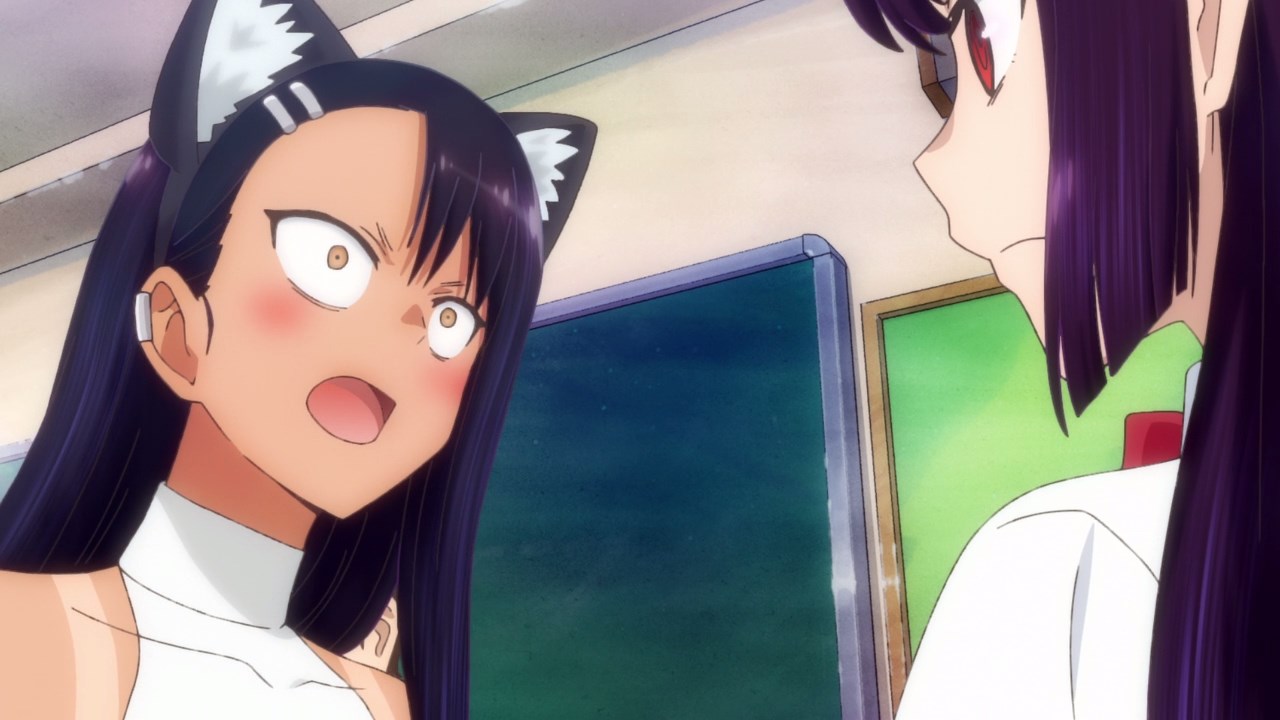 But speaking of Nagatoro, she told the club president that Sempai is doing great at his sketches.

Oh Hayacchi, are you defending your scrawny upperclassman or you still mock him for being a closet perv? I mean, it’s not like you’ve noticed his artistic talent. 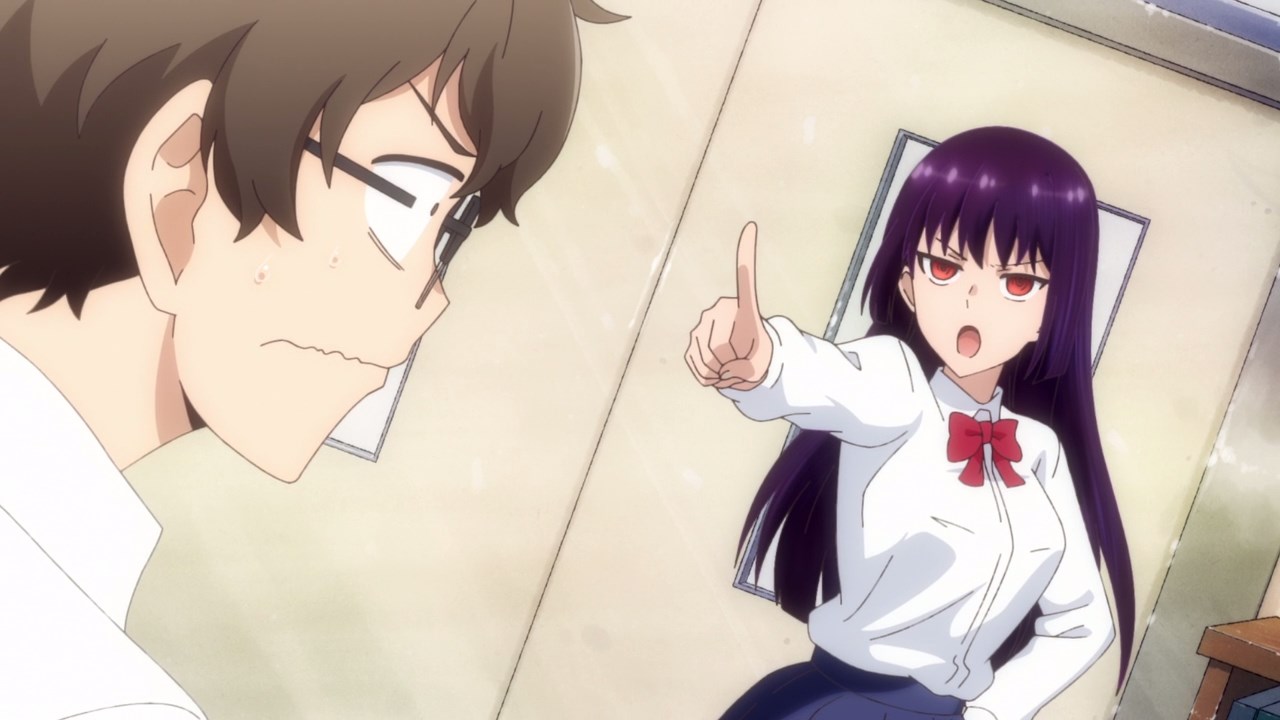 With that said, looks like the club president decides to challenge her club member to see which artist is better. Oh yeah, it’ll happen during the school festival so there’s much pressure towards Mr. Sempai.

Anyways, I’ll see you next time and man, it’s sucks that the nameless protagonist will have a showdown against the club president. Also, I have doubts that Nagatoro-san will help him.