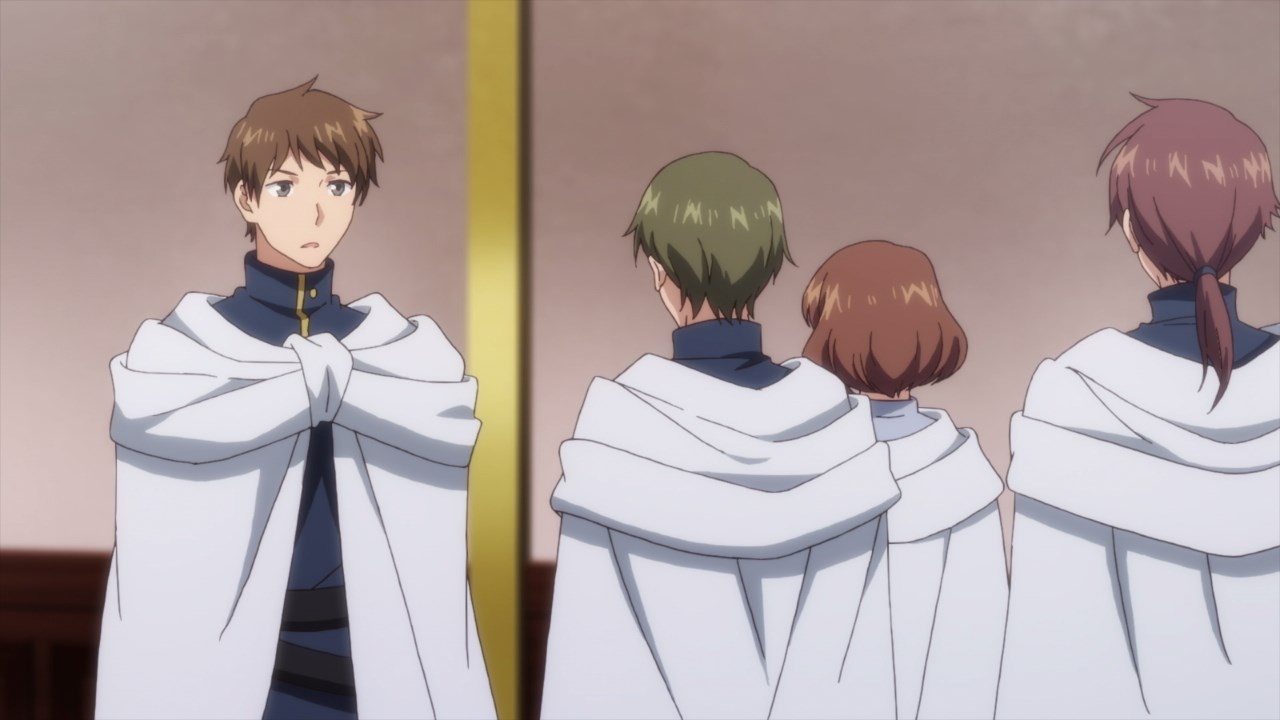 Looks like the Royal Magi Assembly has some new recruit as this facilitator explains on what they do every day. Of course, one of the new recruits won’t do menial tasks for today. 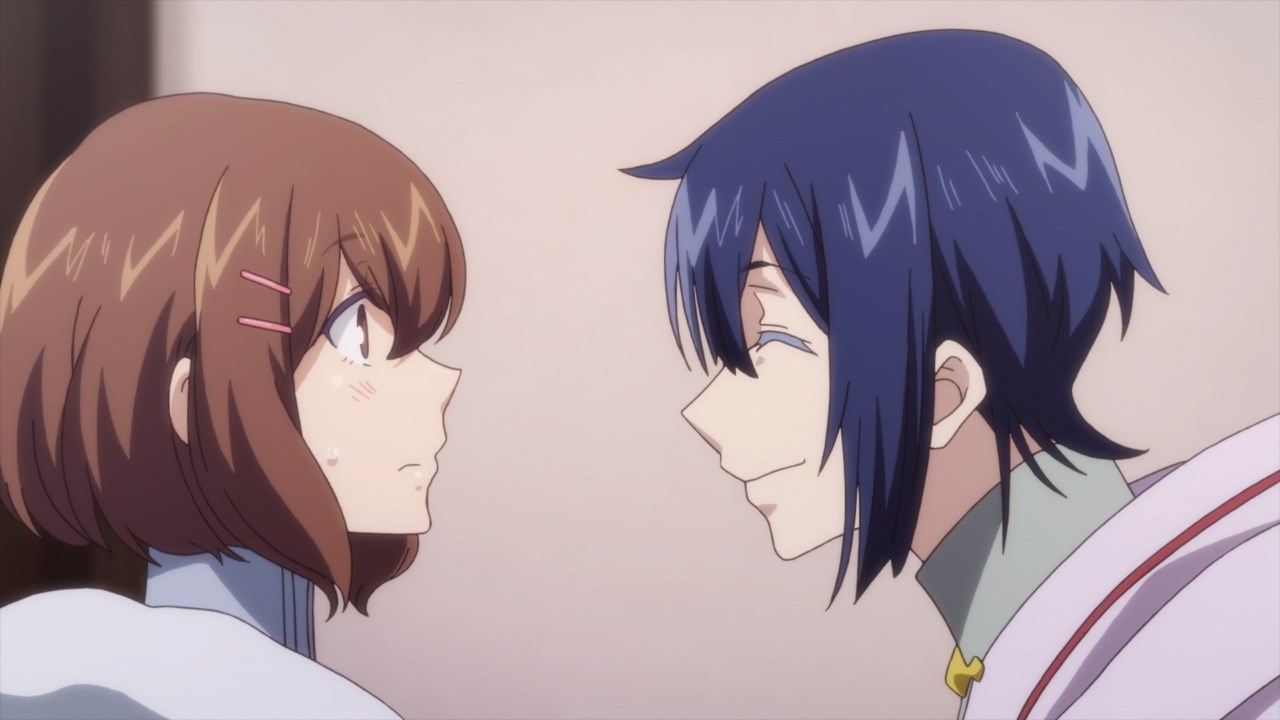 You see, there’s Yuri Drewes where he’s in a hurry upon learning that Sei Takanashi went to Klausner’s Domain. Man, the Grand Magus is really obsessive towards the Saint.

Oh yeah, Yuri Drewes noticed Aira Misono where the Grand Magus wants to take young mage-in-training to his journey towards Klausner’s Domain. I’m really worried that Misono might get into trouble when she’s involved with the Grand Magus. 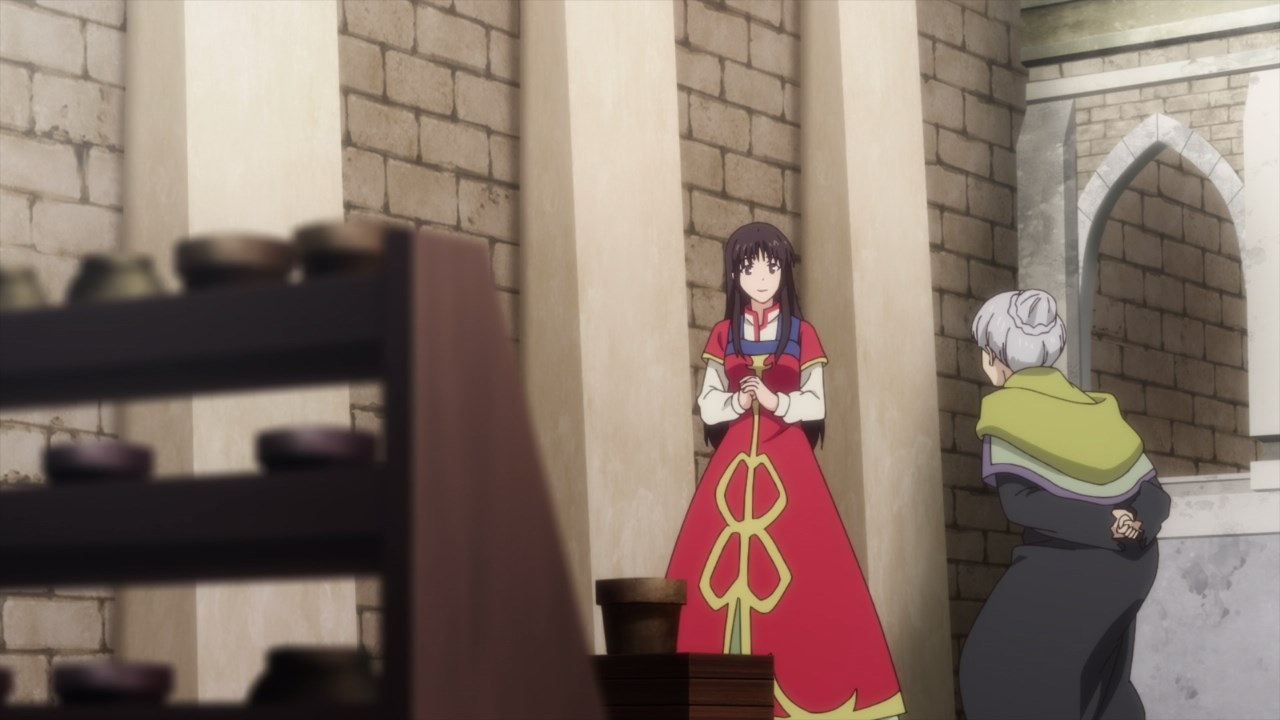 But let’s return to Klausner’s Domain as Sei Takanashi doing something radical as she’s gonna bless this pot which might turn into a holy plant.

Of course, Sei has to think about Albert Hawke most of the time because c’mon, she’s in love with the knight commander. 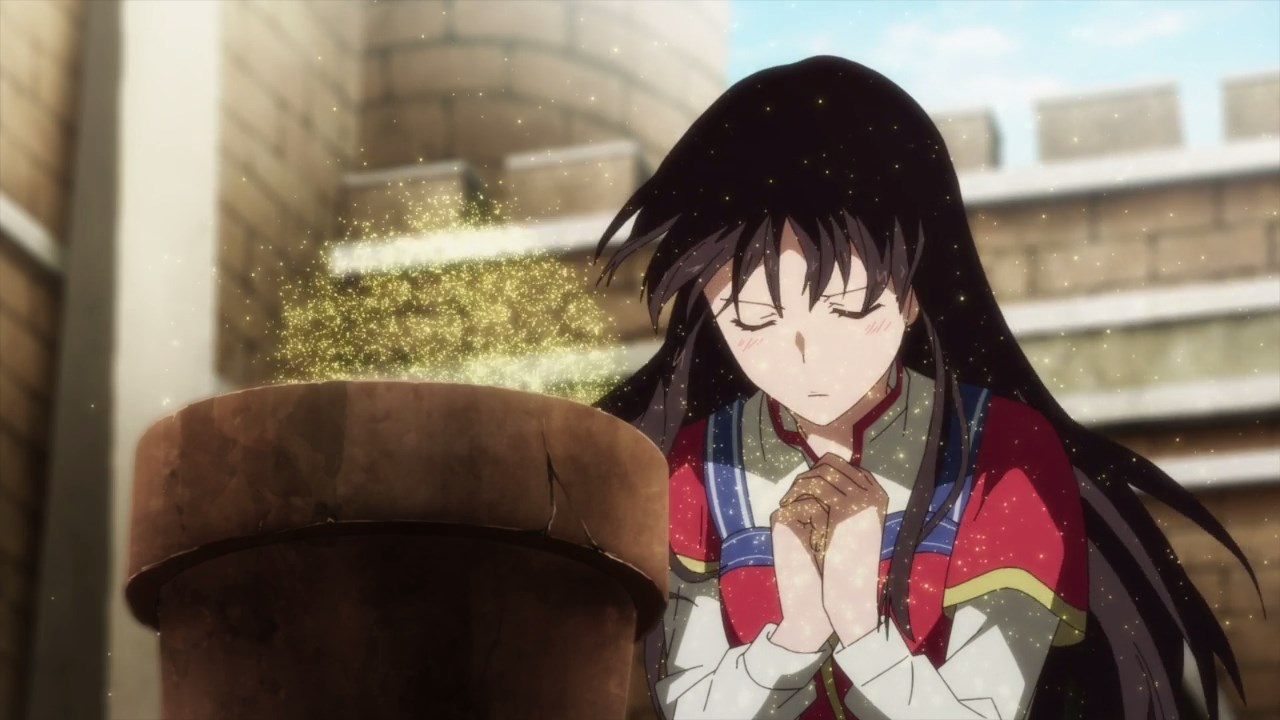 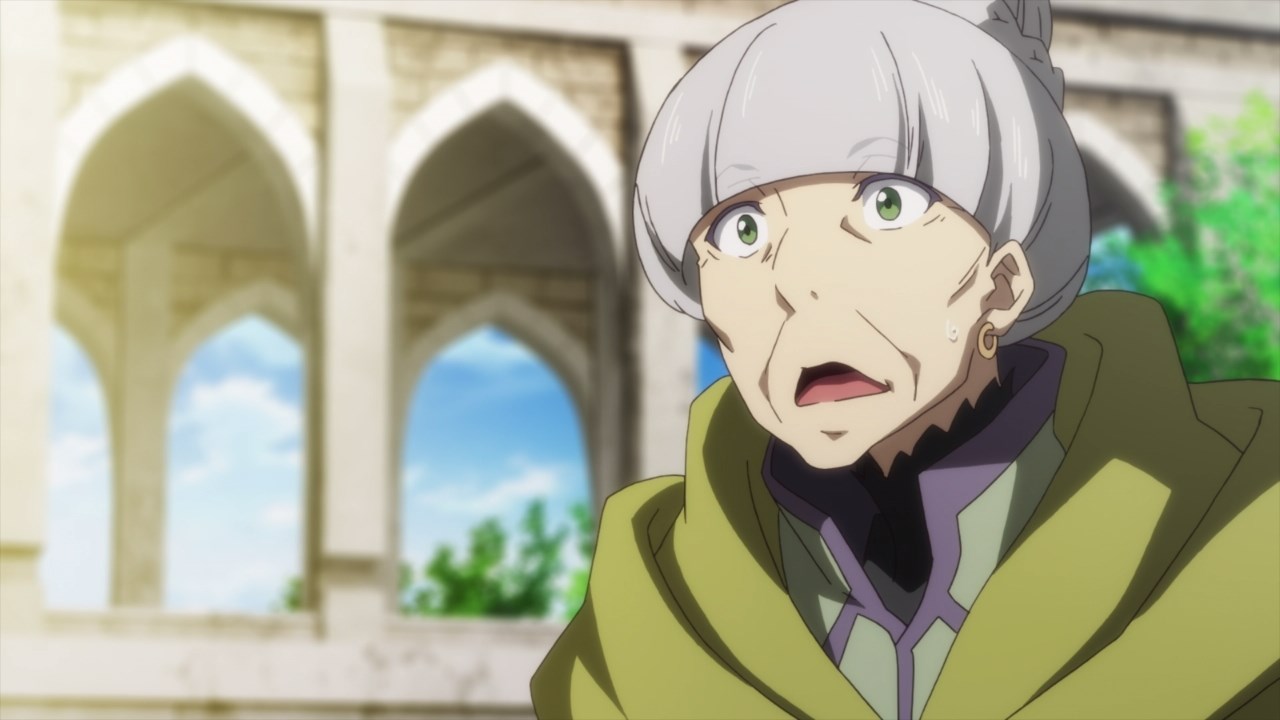 In any case, looks like Corinna is very surprised that Sei blessed the pot that the alchemist expect that it’ll bloom into a herb with holy properties.

Then again, it’ll take time for Sei Takanashi to restore the herbs since Klausner’s Domain has a large plantation of it. Oh, and not to mention the miasma threat too. 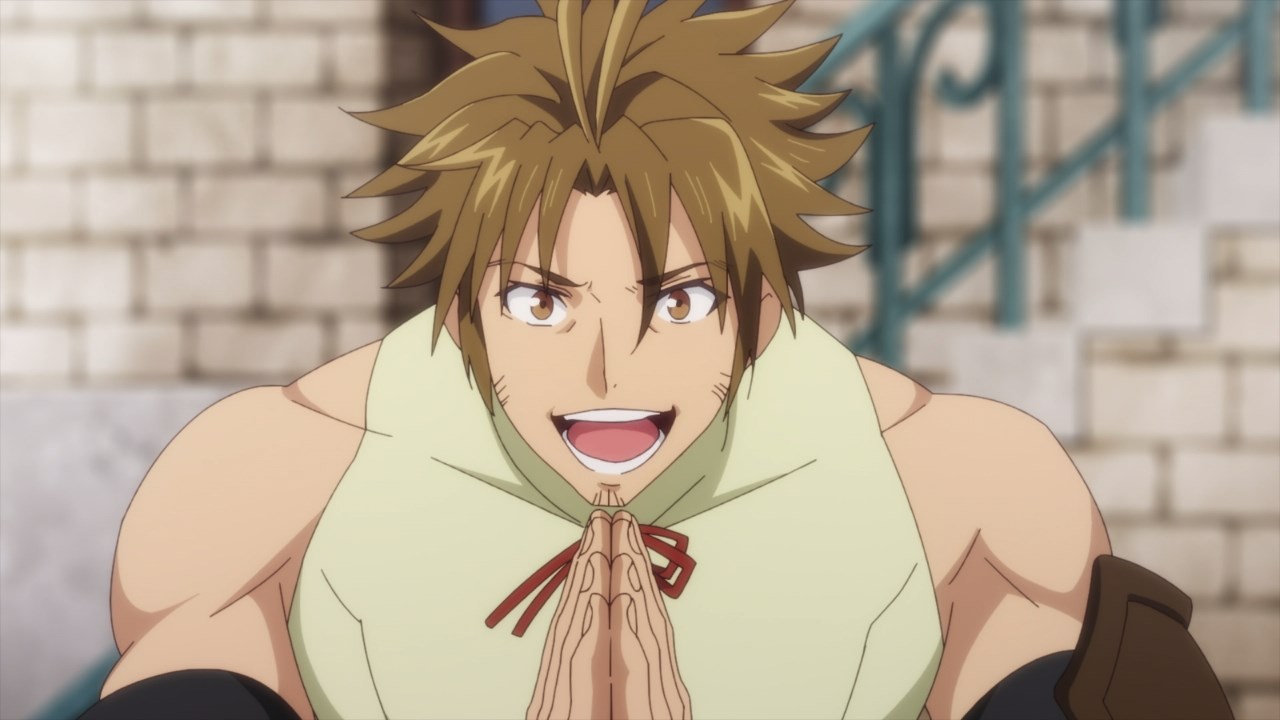 Meanwhile, here’s Leonhardt where he wants to recruit Sei Takanashi into his mercenary squad since she can make lots of potions and has healing powers. 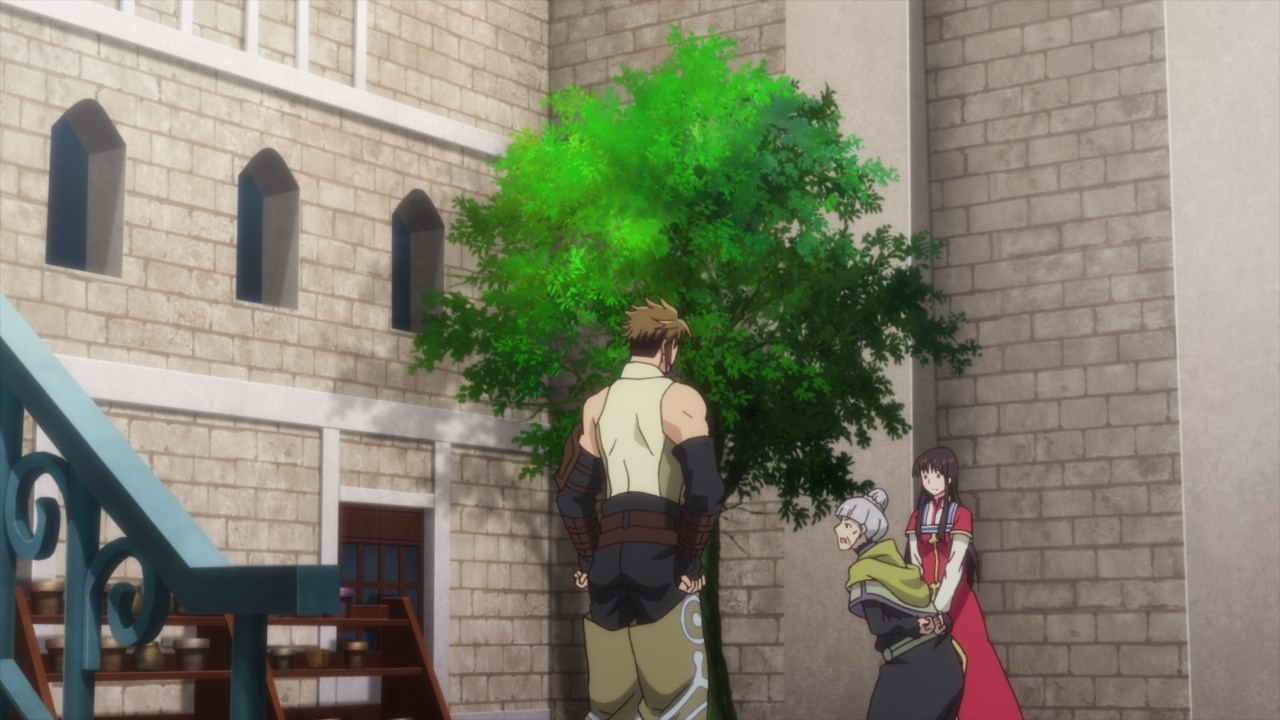 Of course, Corinna told Leonhardt not to recruit Sei Takanashi ’cause she’s a Saint where Sei is already being protected by Albert Hawke and his 2nd Knight Order. 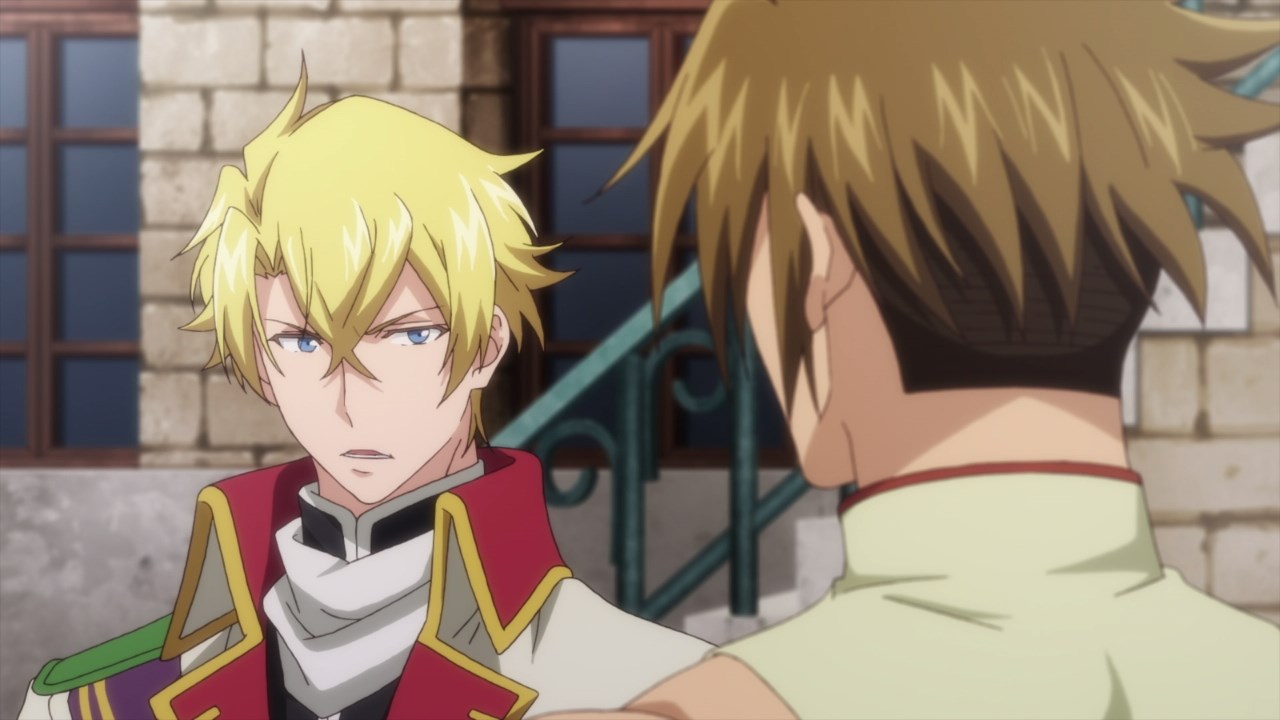 Oh and here’s Albert where he won’t let anyone, including Leonhardt, put Sei into danger. Come to think of it, Albert Hawke is becoming more like Kyle Salutania.

Nah, I don’t want the knight commander getting possessive towards Sei Takanashi, although I wish Albert should take care of himself ’cause he’s getting hurt most of the time! 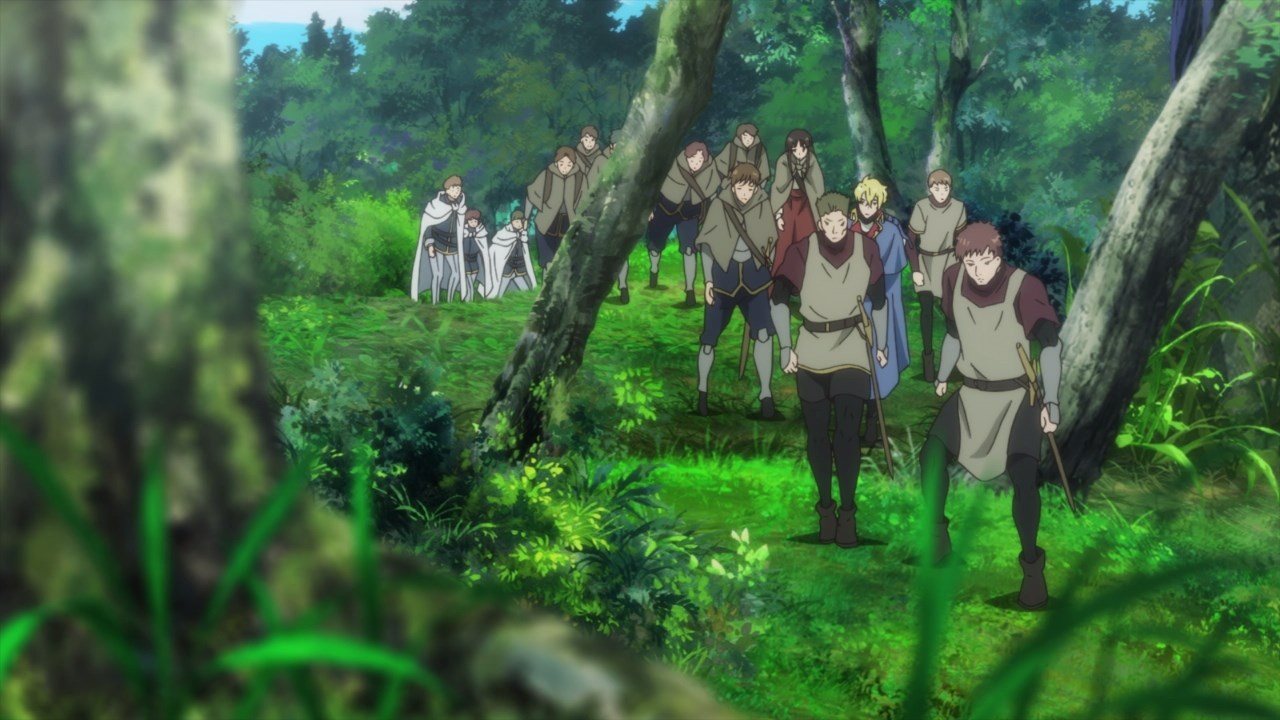 Now let’s move onto the next scene where the knights and the mercenaries went to the woods to find the miasma so that Sei can purify it. 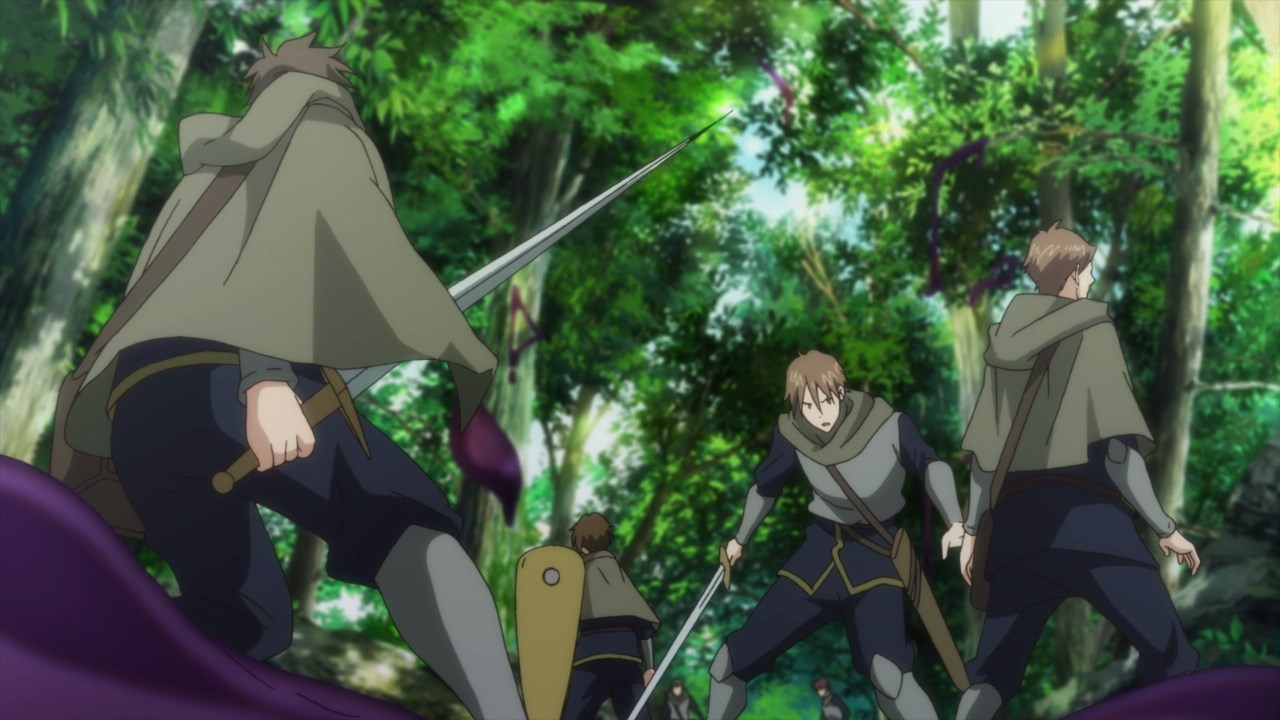 Unfortunately, it appears that they’ve encountered some slimes and they’re not the cute kind that you see in Dragon Quest.

Thanks to the miasma, these slimes can melt human skin if these knights and mercenaries are not careful. 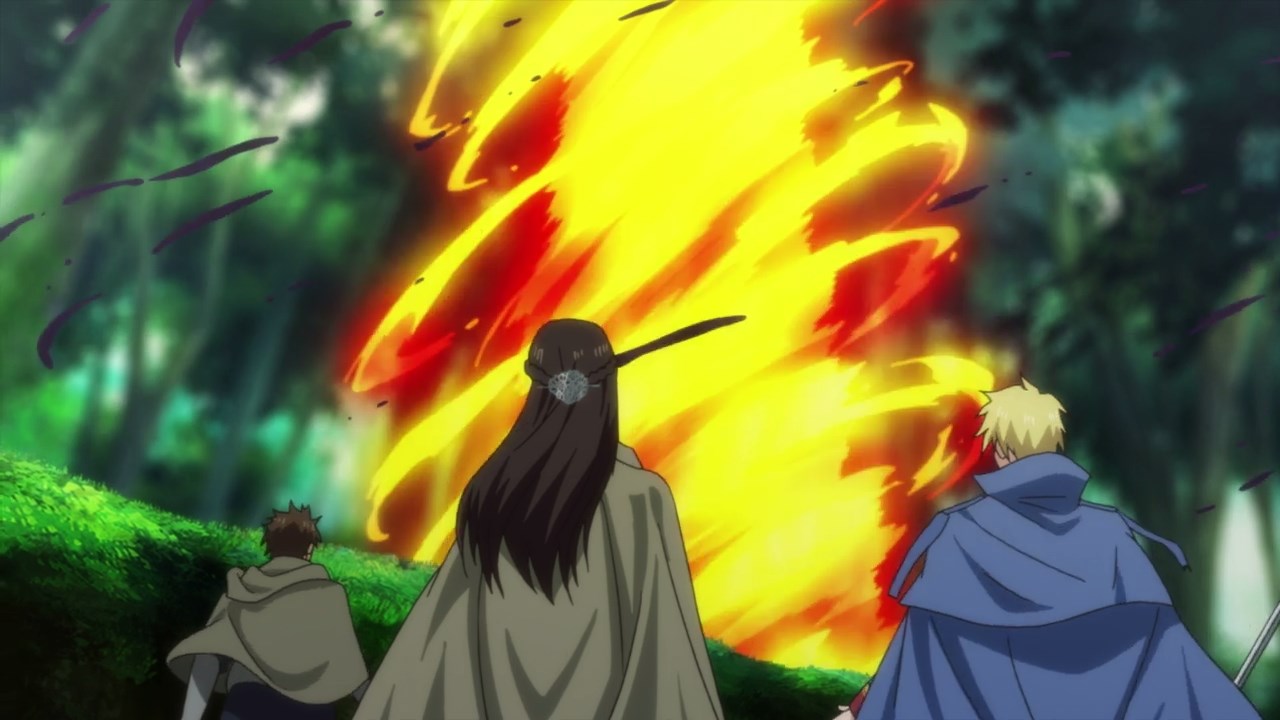 Luckily, it turns out that someone casts fire magic to stop those slimes. I have a feeling that the Grand Magus and his friends have arrived in Klausner’s Domain. 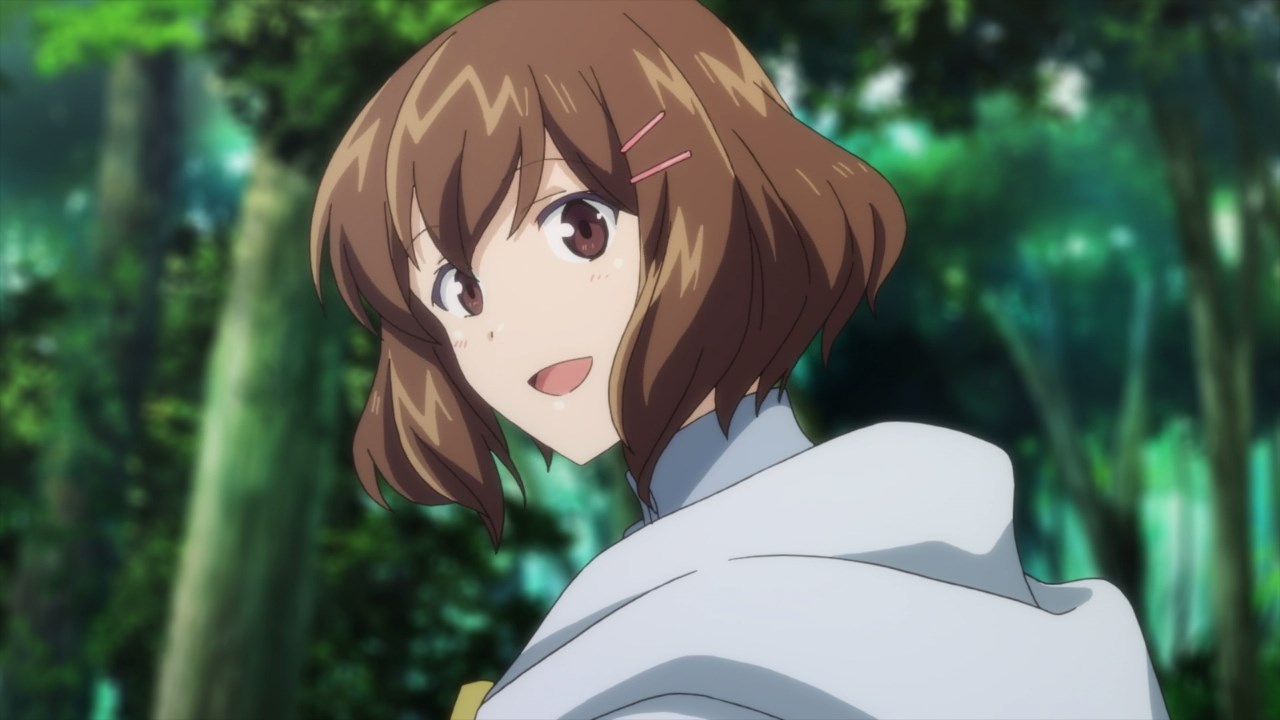 In any case, here’s Aira Misono where she’s here to rescue Sei Takanashi, although I feel that she’s still can’t handle powerful monsters.

But you know what, Aira Misono will do fine under Yuri Drewes’ tutelage since she’s a fast learner. 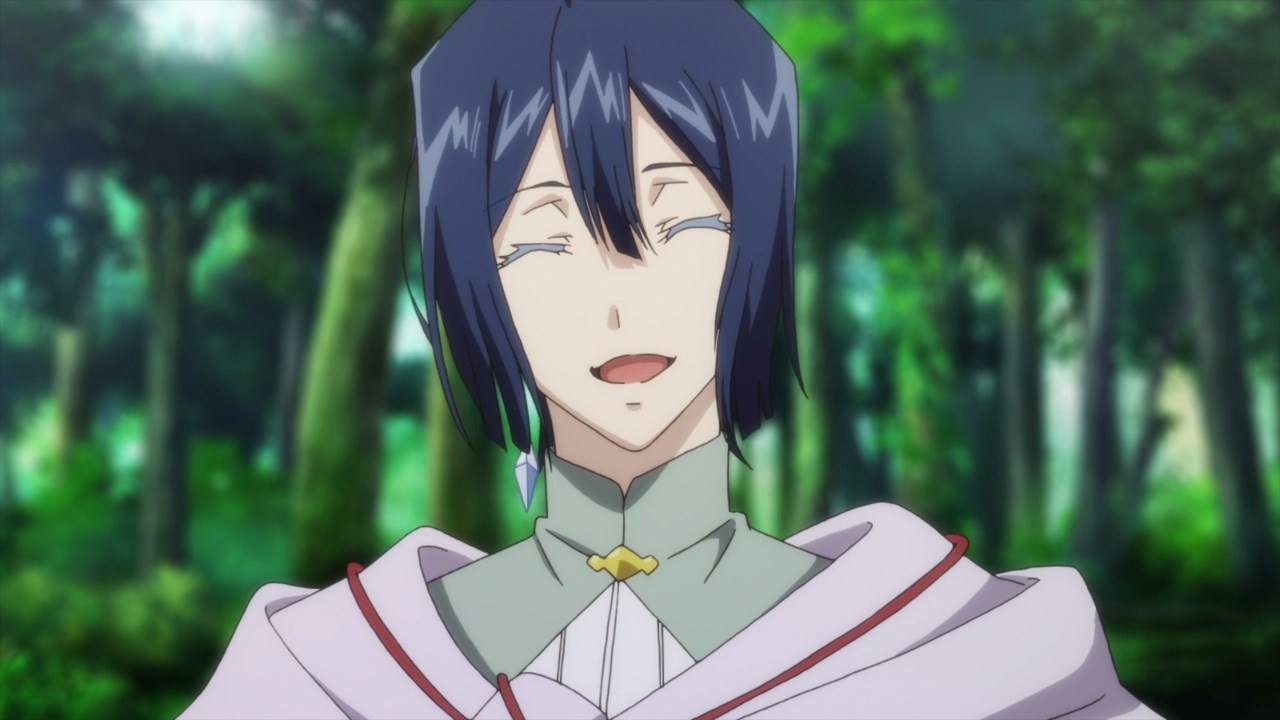 Oh yeah, here’s the Grand Magus where he finally found Sei Takanashi. Um Albert Hawke, you should defend the Saint from Yuri Drewes ’cause he’s dangerous!

But that’s about it for this episode as I’ll see you next time for the finale!