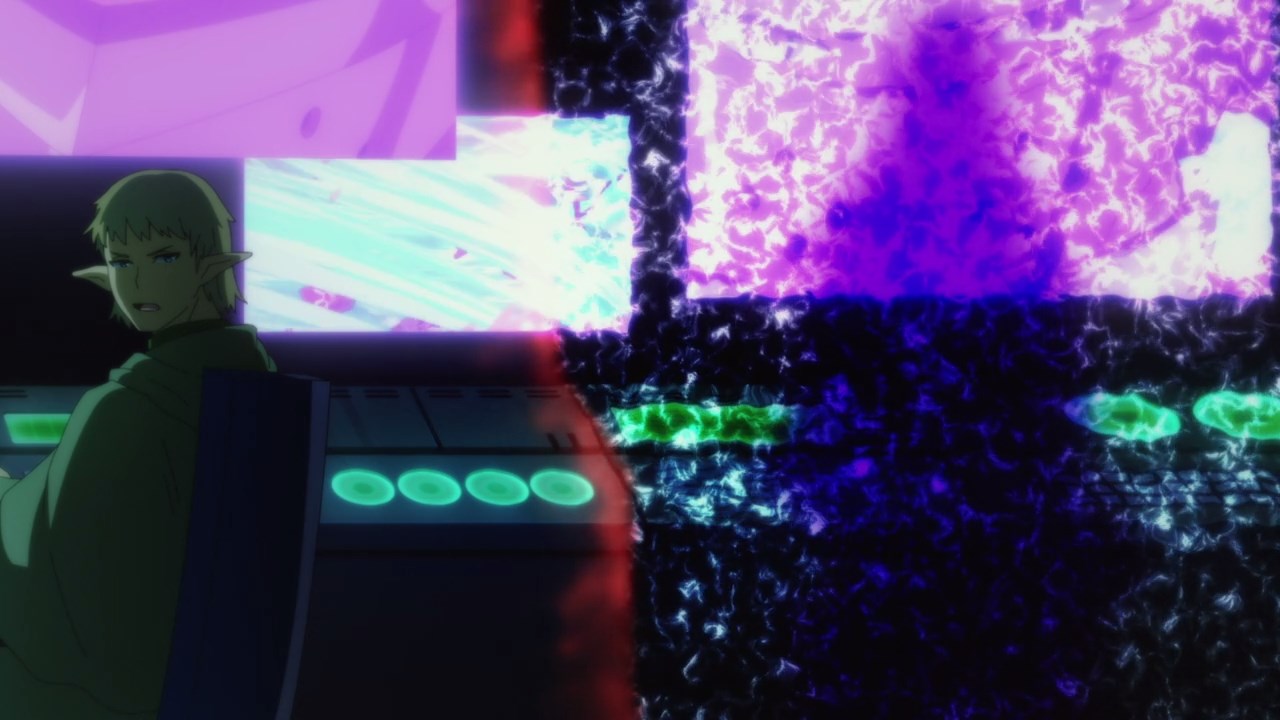 It looks like the elf village has some fancy equipment straight from the future, which begs the question on how they managed to bring some advanced technology in a medieval fantasy world? 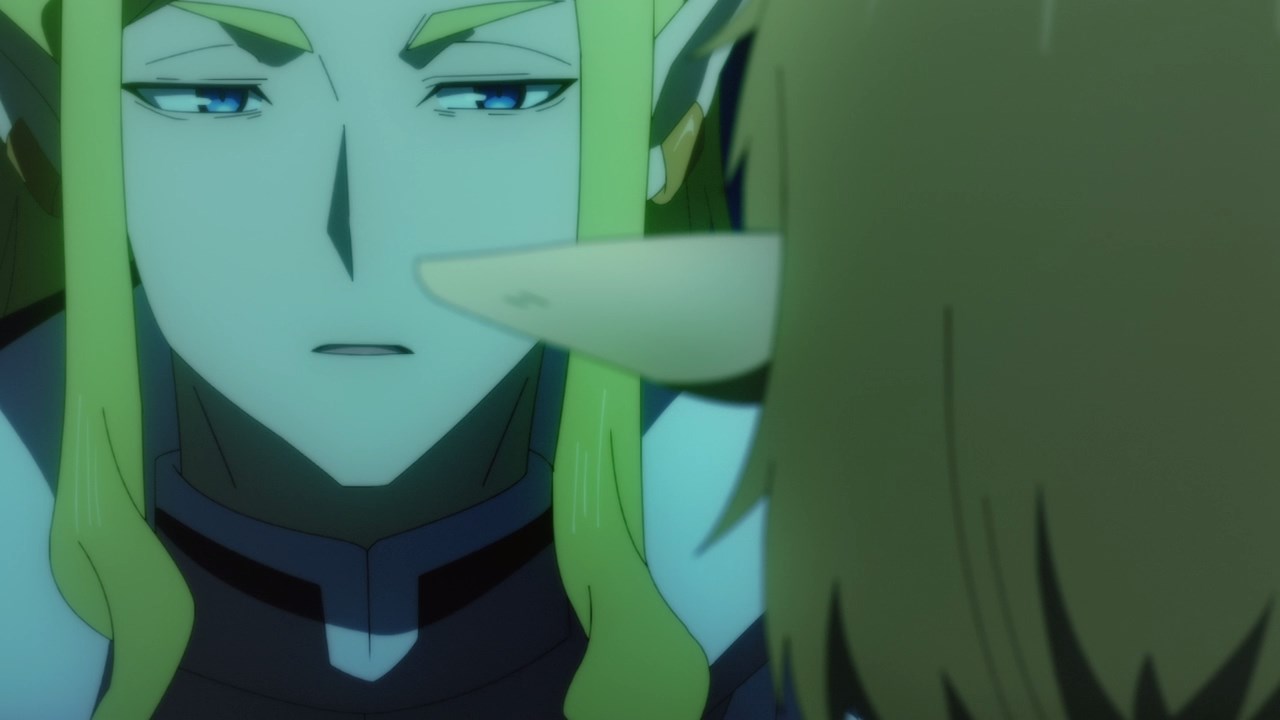 Also, here’s Potimas where he’s alarmed that the demon lord is approaching. You know something, why would Ariel target the elven leader? Does it have to do with the reincarnated people? 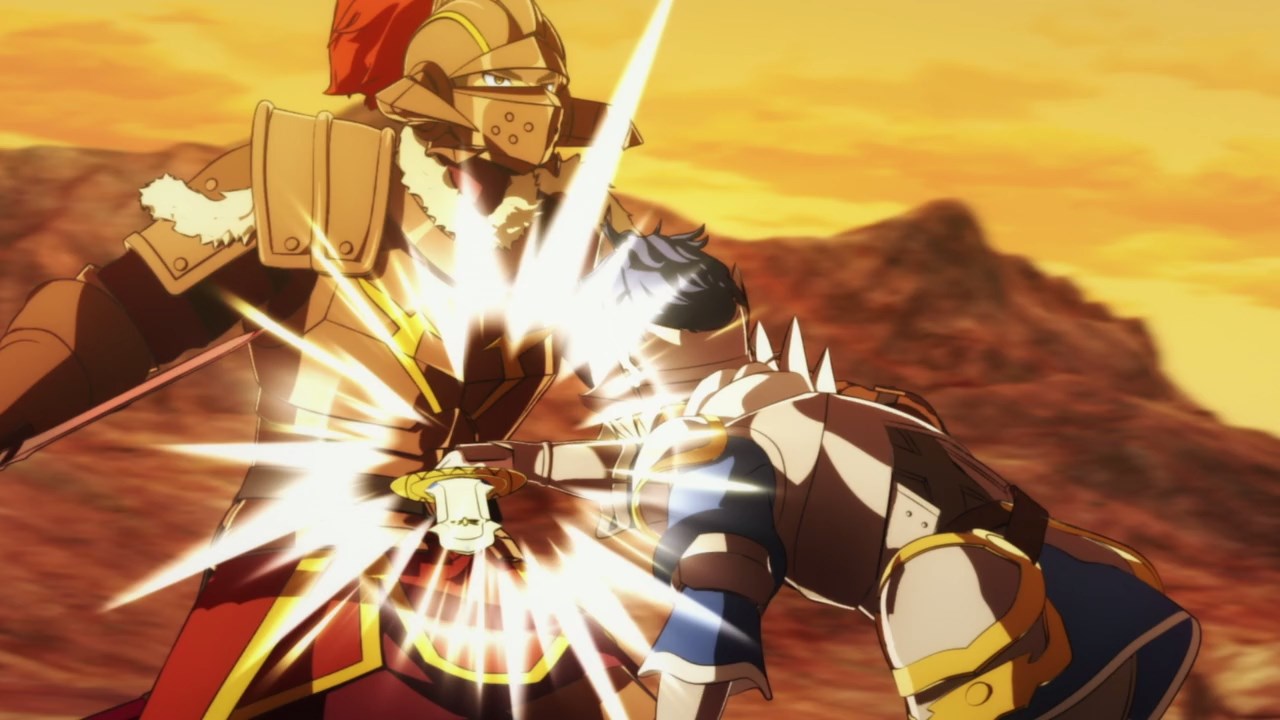 Now then, let’s move onto the fated battle between Hugo Baint Renxandt and Schlain Zagan Analeit, although Hugo got beaten quickly by Schlain simply because the true hero has Dragon Power which nullifies Hugo’s magic.

Heck, even his aspects of Lust and Greed won’t sell against Schlain, meaning that Hugo lost the battle without going to the distance. Looks like he needs to sell his soul further to Sophia Keren. 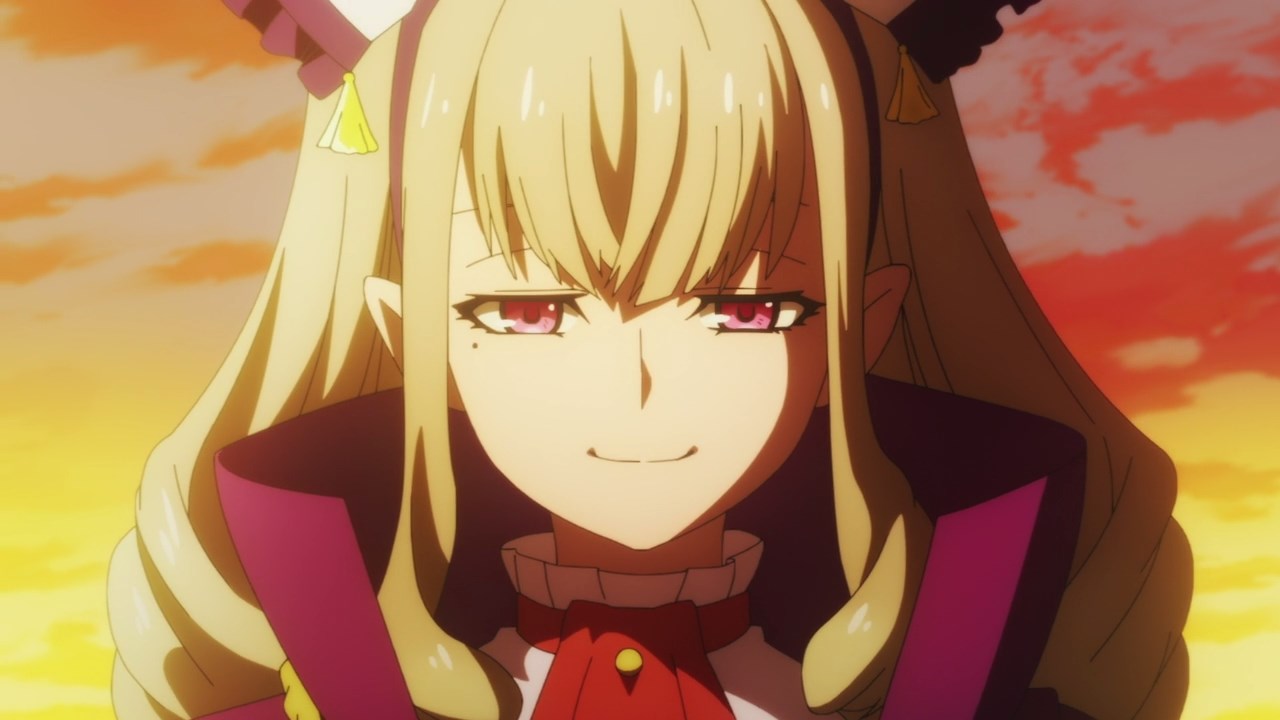 Speaking of Sophia Keren, looks like she has to intervene as the vampire found it pathetic that Hugo couldn’t kill Schlain. Oh yeah, Sophia didn’t go by herself. 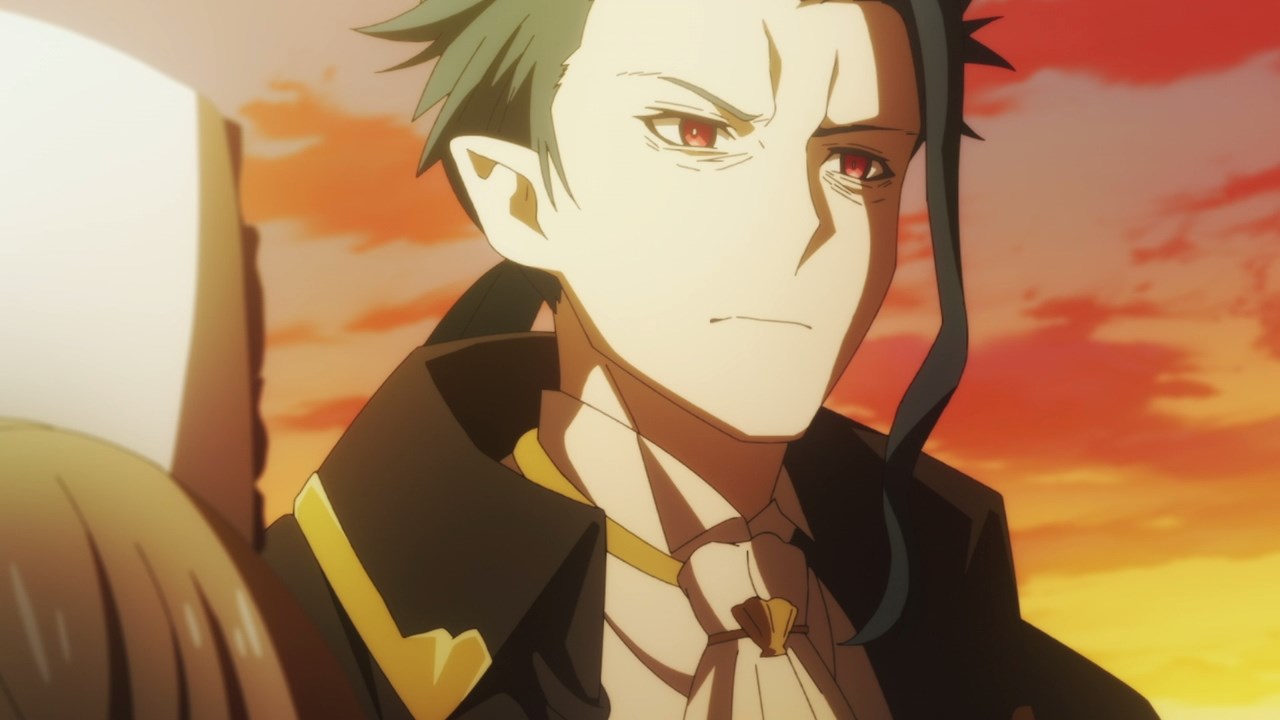 You see, she brought Merazophis along the ride and you probably recognize him as the attendant of John Keren.

I can’t believe that he joined the demon army after his master died, although I’m not sure what happened to the Keren County after it’s being invaded by the Kingdom of Ohts. 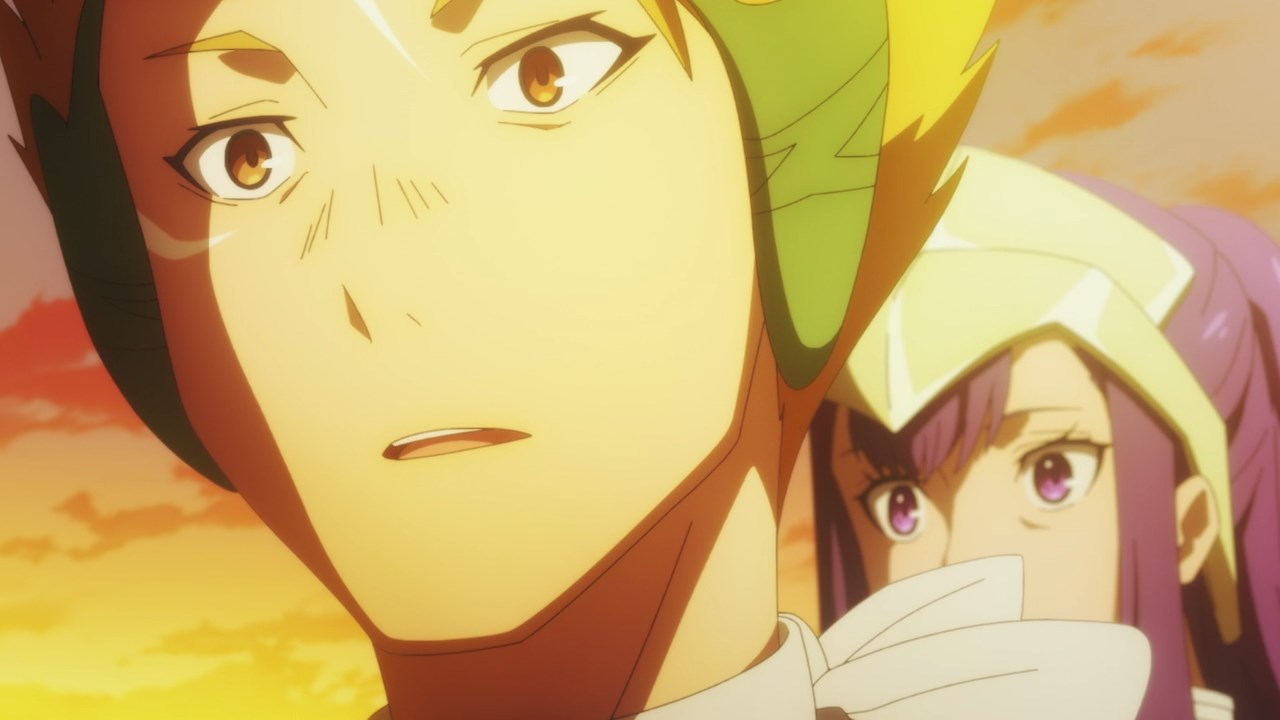 On the other hand, looks like Kunihiko Tagawa and Asaka Kushitani recognize Merazophis as they fought him before. Then again, I feel that Merazophis is not the same demon as before. 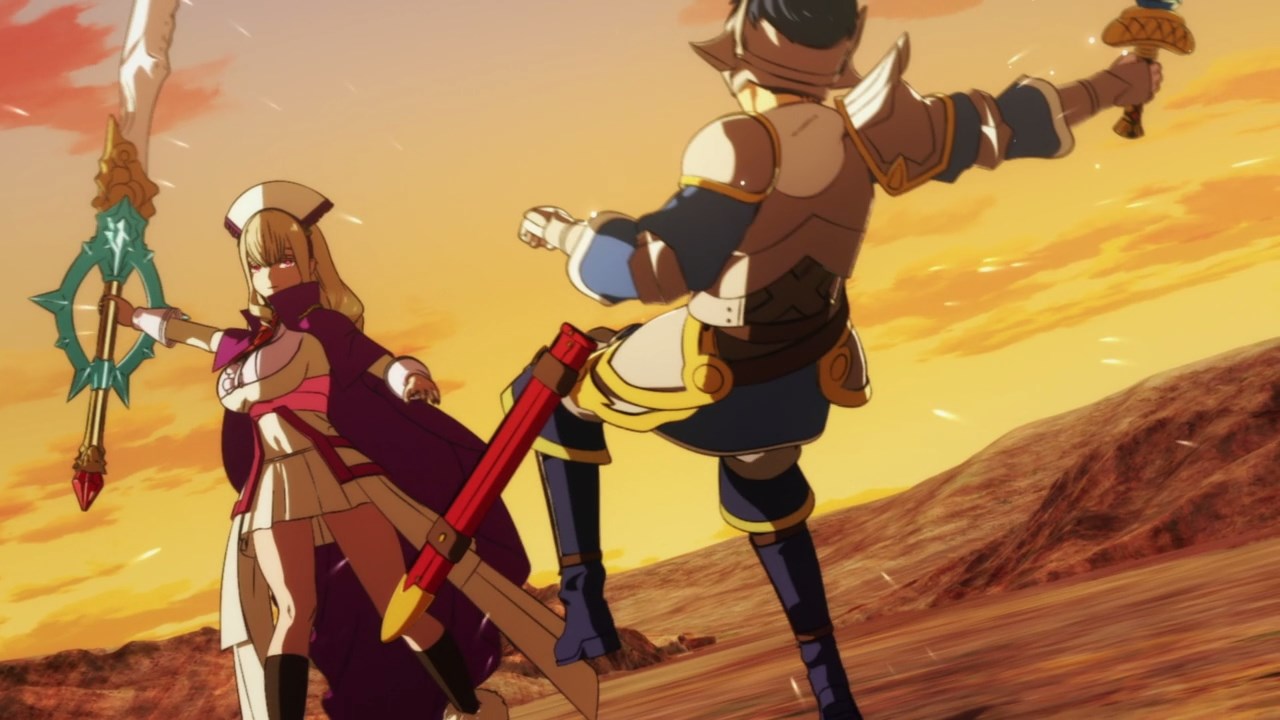 Anyways, it’s time for Schlain Zagan Analeit to defeat Sophia Keren and the rest of the demon army.

Then again, it appears that the hero can’t even put a dent against the vampire as Sophia overpowers Schlain’s Dragon Power skill. I guess he needs to grind more if Schlain has a chance of beating Ariel. 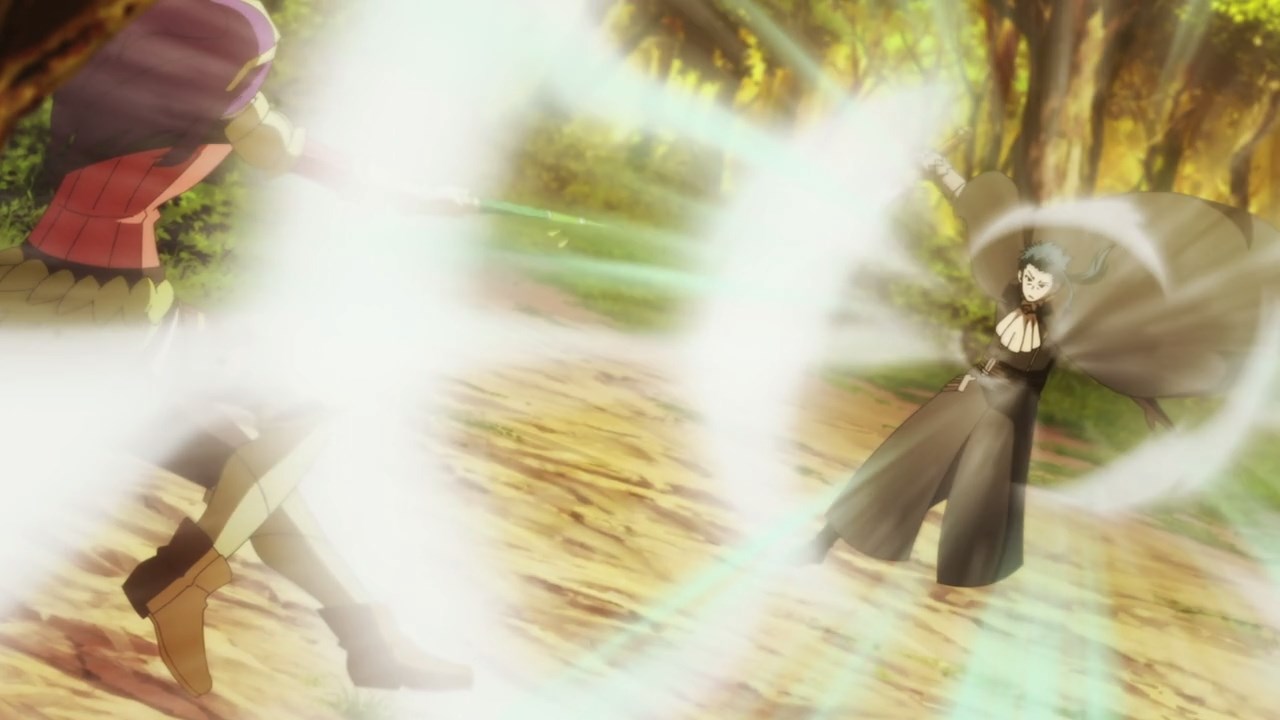 On the other hand, looks like Merazophis is overwhelming both Kunihiko and Asaka, meaning that the demons are actually winning in this stupid war between two sects.

Of course, Sophia Keren won’t kill any of the reincarnated beings as she was ordered by her boss to kill every elves. Then again, I wonder if this includes Anna since she’s an half-elf? 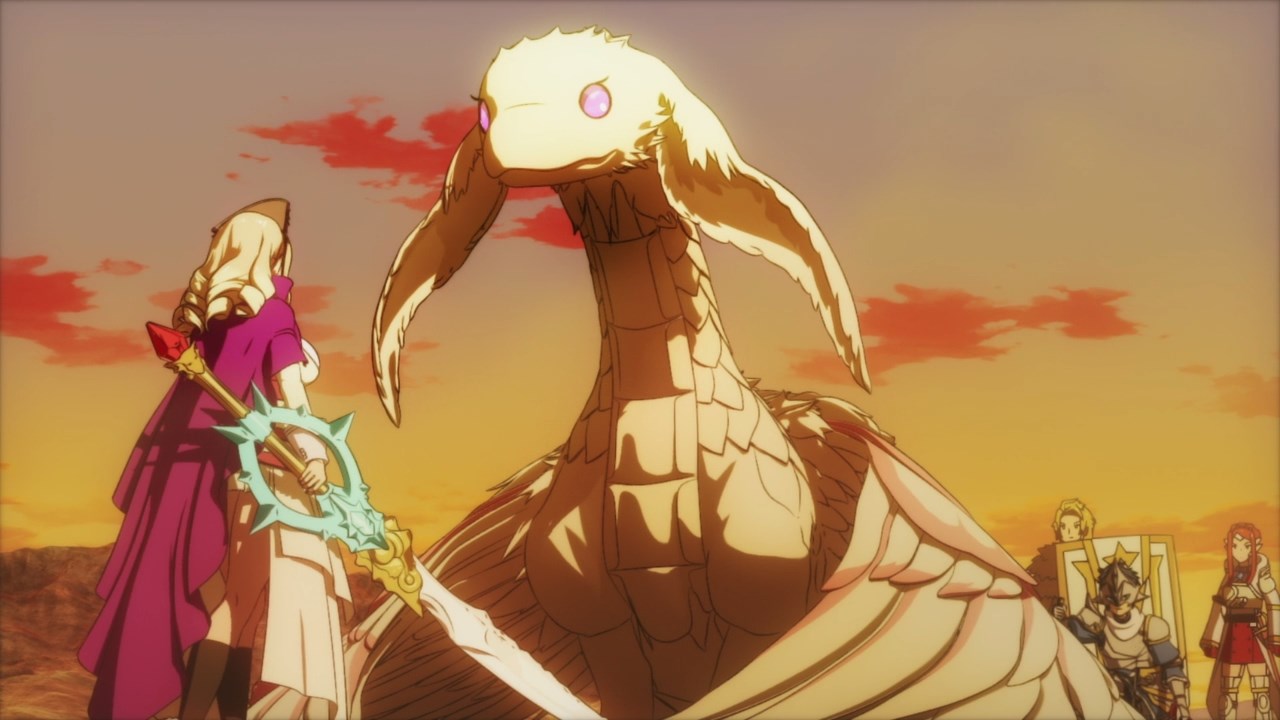 With that said, it appears that they have no choice but to surrender as Feirune begs Sophia Keren to spare their lives which includes Anna. C’mon, they can’t even win against- 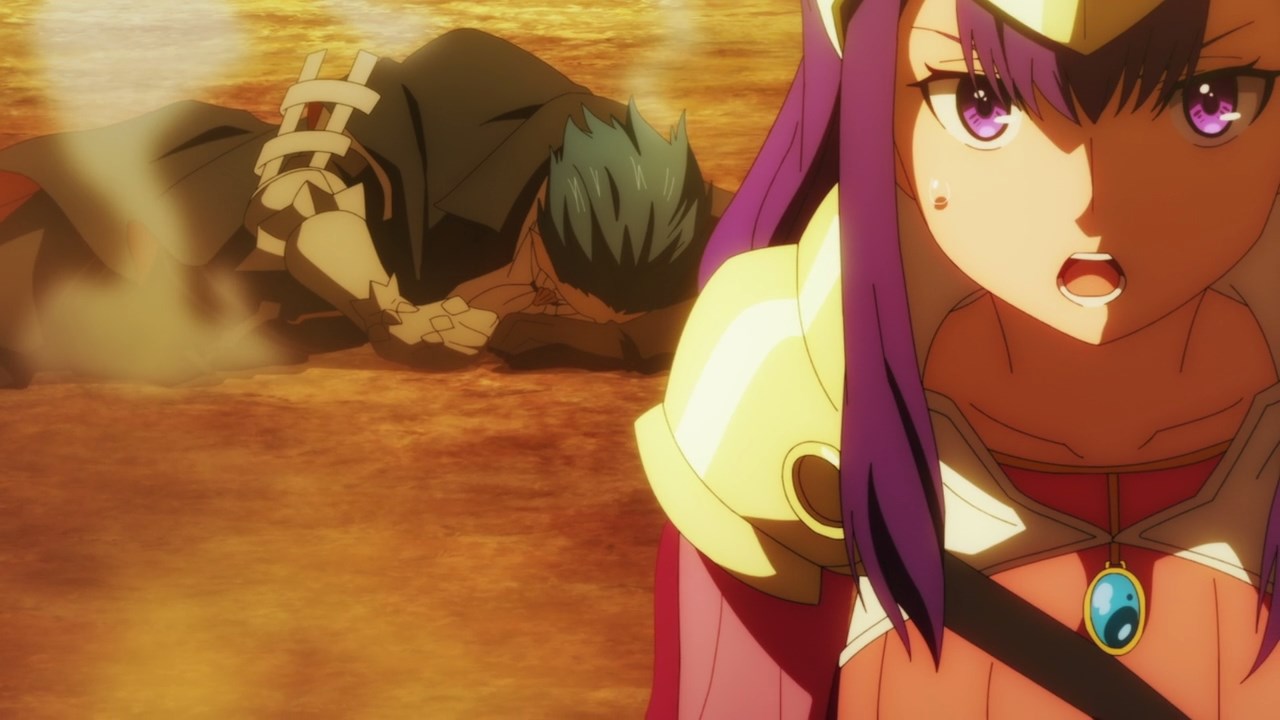 Oh wait, they still have a chance as both Kunihiko and Asaka defeated Merazophis. Man, I thought that Sophia’s attendant is actually strong but I was wrong. 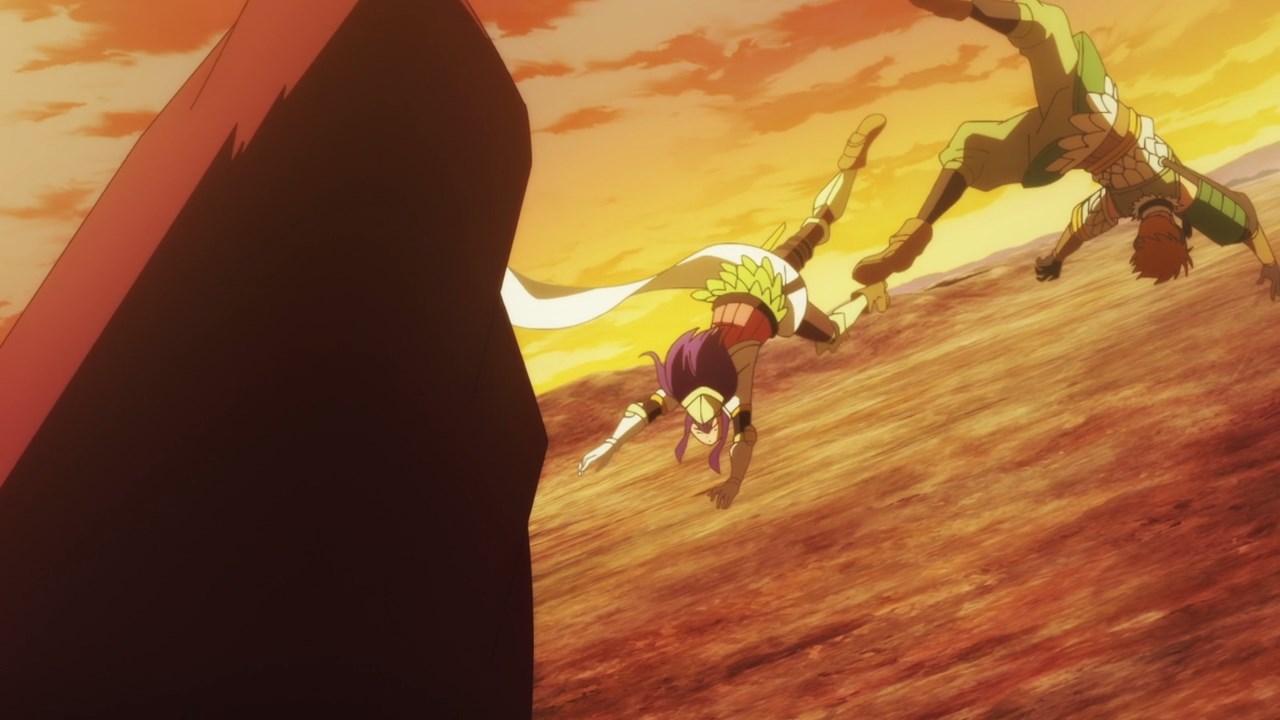 Actually, I’ll take it back on what I’ve said earlier regarding their comeback as these two reincarnated beings got kicked by a demon general. 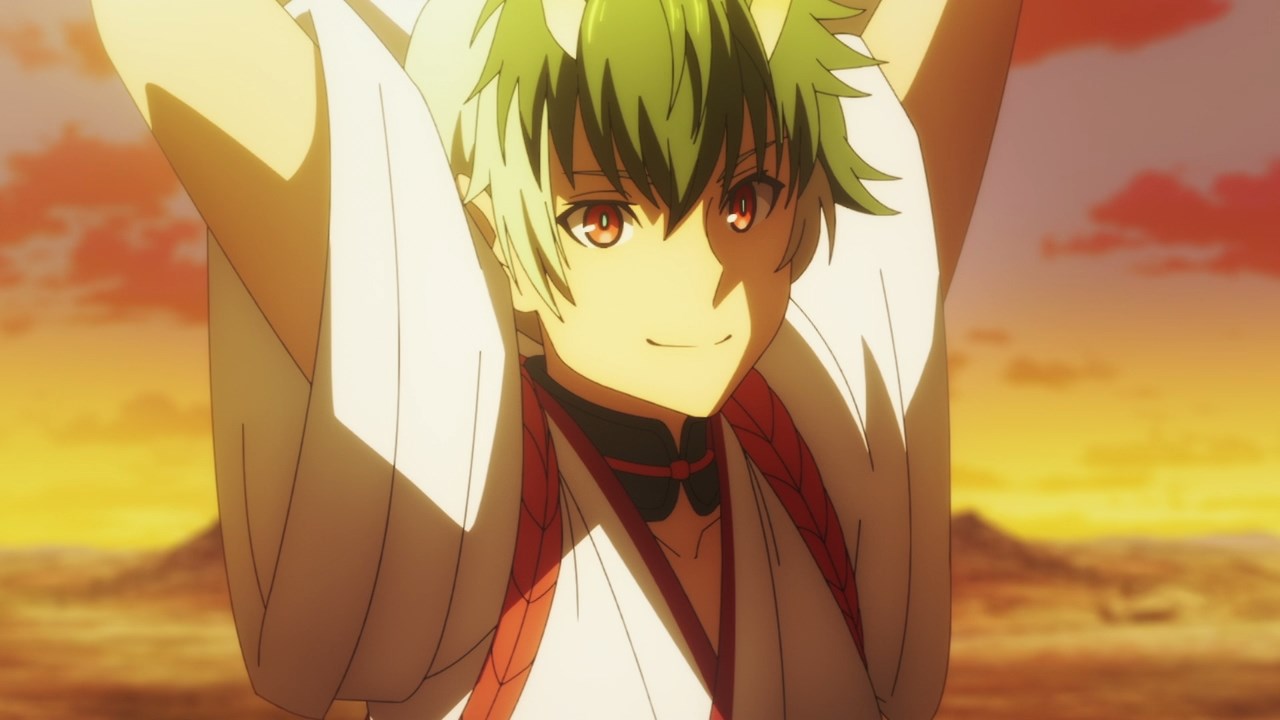 Said demon general happened to be Wrath where it turns out that he’s actually a reincarnated being, previously known as Kyouya Sasajima.

Well, that makes two reincarnated beings who joined the demon army so far. Still, it’s sucks that Schlain Zagan Analeit (or Shunsuke Yamada) will have to fight his friend. 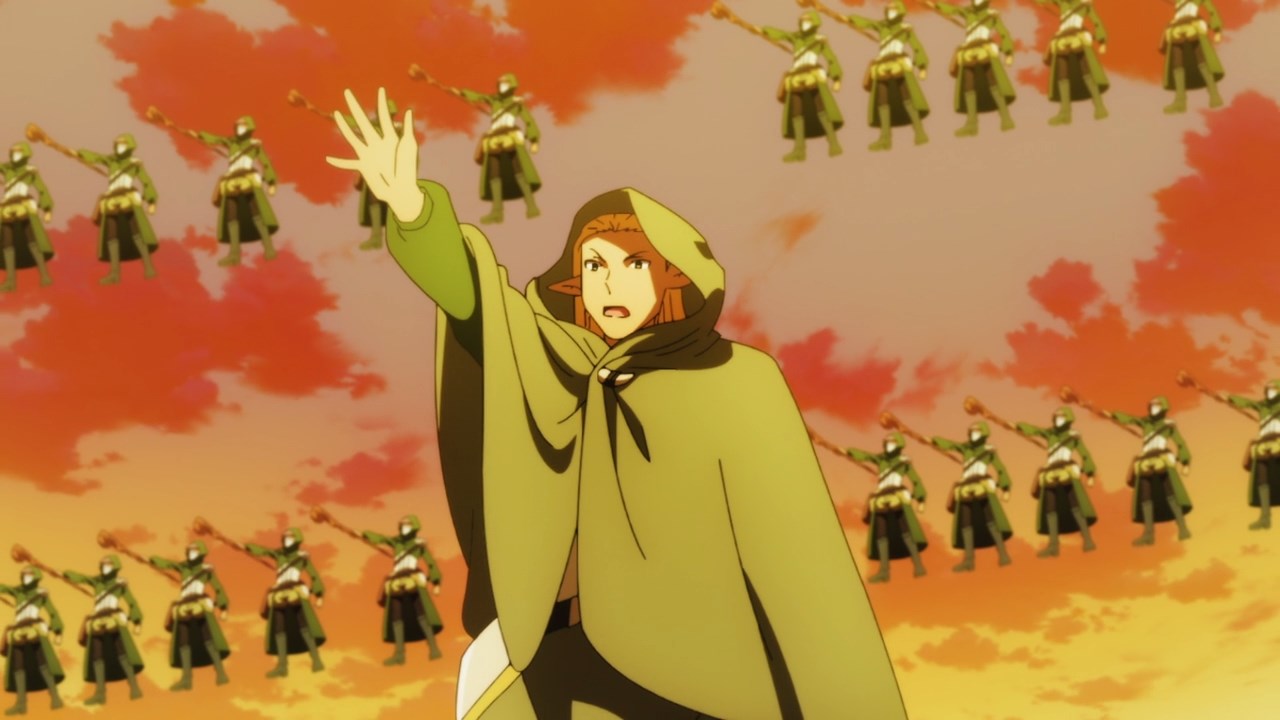 Meanwhile, looks like the elves are about to unleash their secret weapon which would turn the tide of war in their favor. 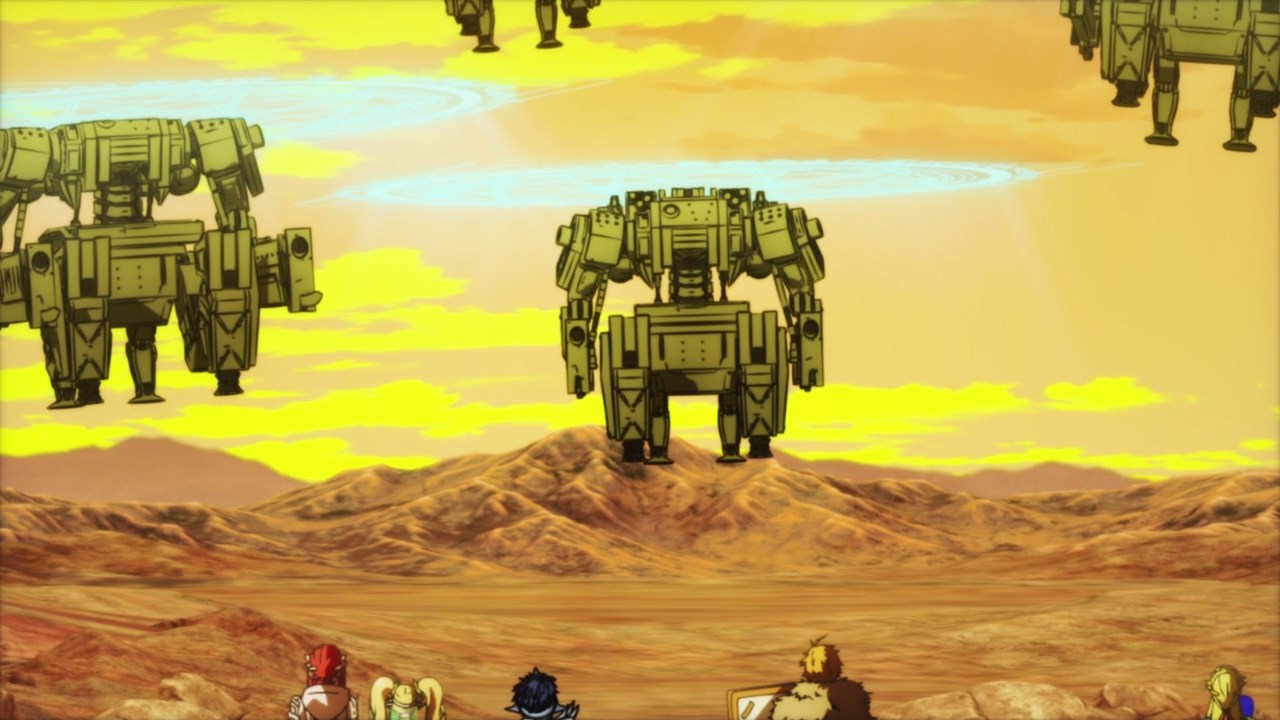 And it turns out that they’ve summoned robots which are indestructible given that it can resist magic. Basically, the demons might not destroy these machines at all.

Man, this is unexpected that I’m not sure who’s winning the war at this point, nor who’s the true villain of this story. 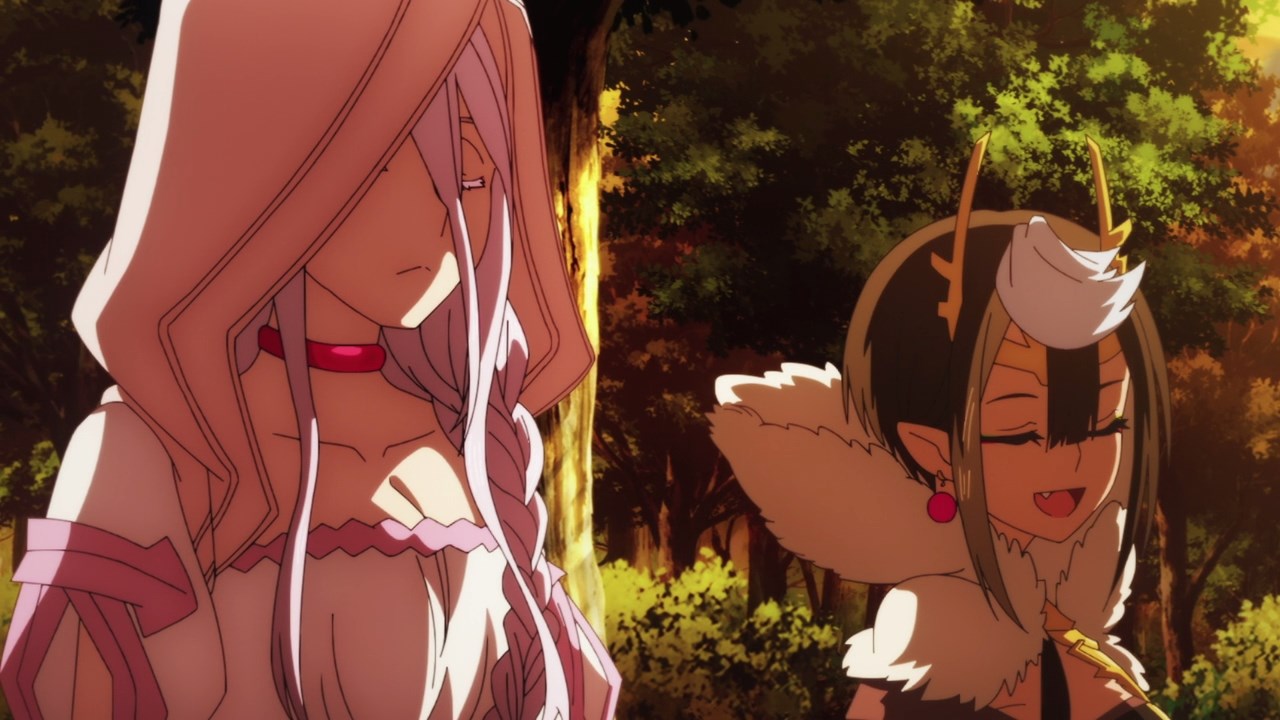 One last thing, here’s Ariel where she’s currently finding Potimas as the demon lord has a score to settle against the elven leader. Also joining Ariel is this lady in white named Shiraori who’s best known for killing Schlain’s brother Julius.

By the way, I wonder what happened to Ms. Spider as she’s about to get destroyed completely by Ariel’s Abyss Magic from the previous episode? While she might take over the demon lord given that her Parallel Minds managed to control Ariel’s body, I could be wrong as there’s a possibility that Ms. Spider might become Shiraori.

Man, I can’t wait on the final episode as there will be some big revelations as this anime show is heading towards its climax!