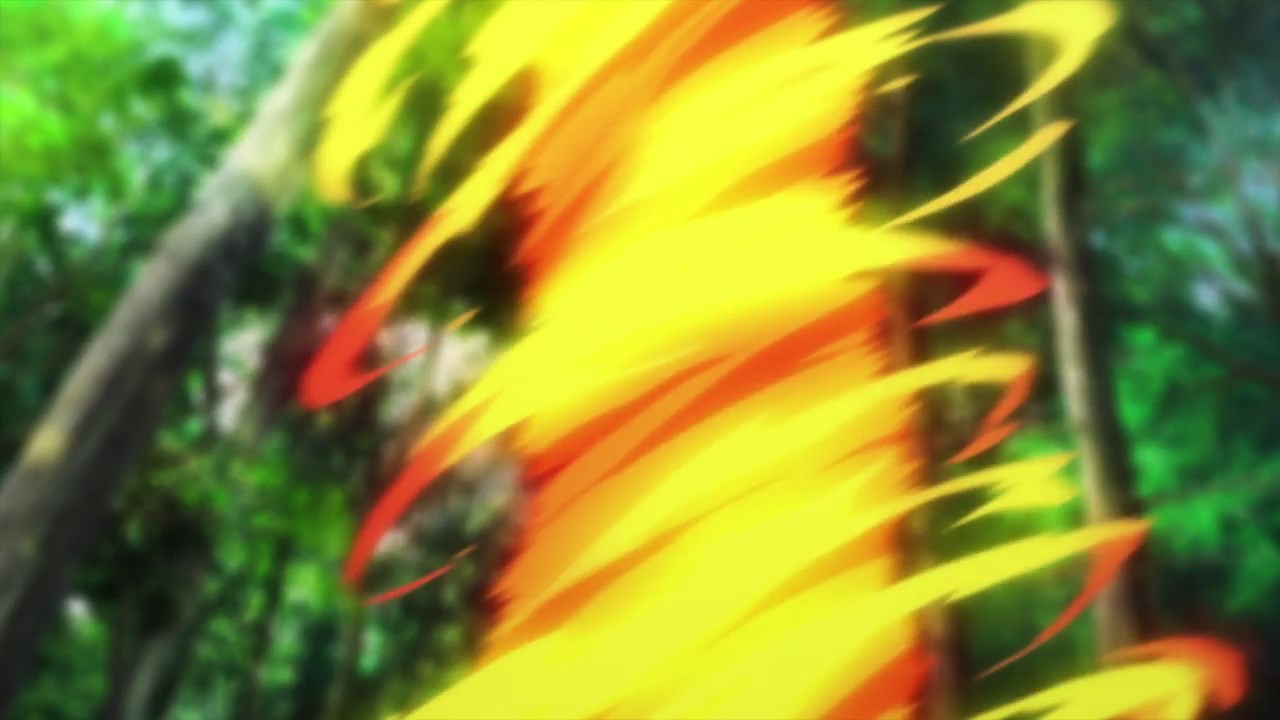 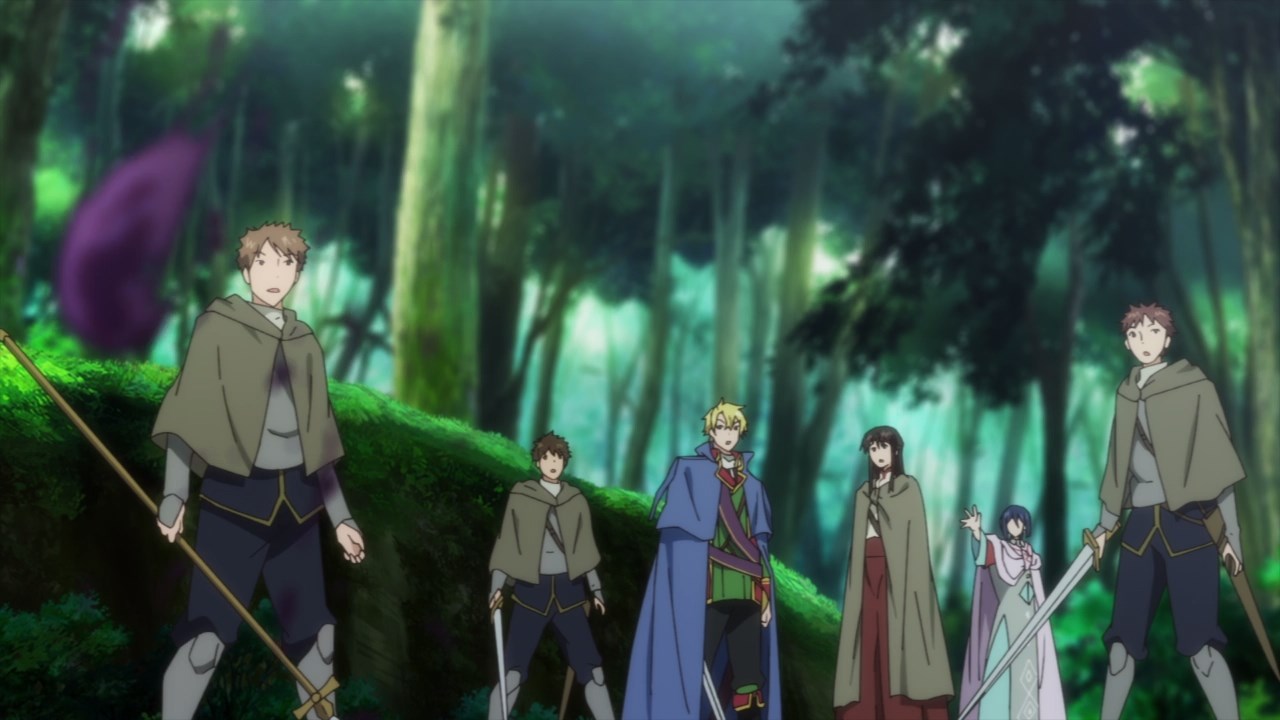 Well everyone, here’s Yuri Drewes where he creates a giant fire pillar that destroys the toxic slime instantly. Glad that the Grand Magus saved their asses.

Unfortunately, Albert Hawke and his team has decided to retreat as going further into the forest is not good, especially when Sei Takanashi used almost all of her mana on casting healing magic. 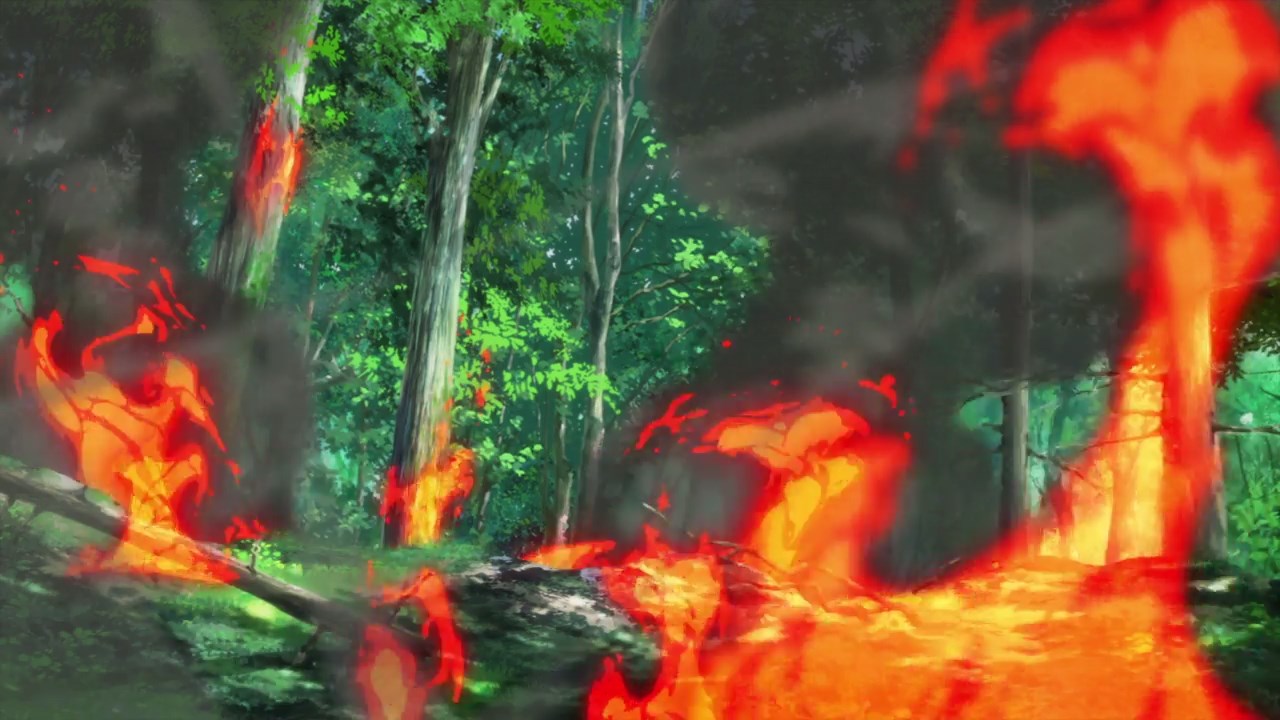 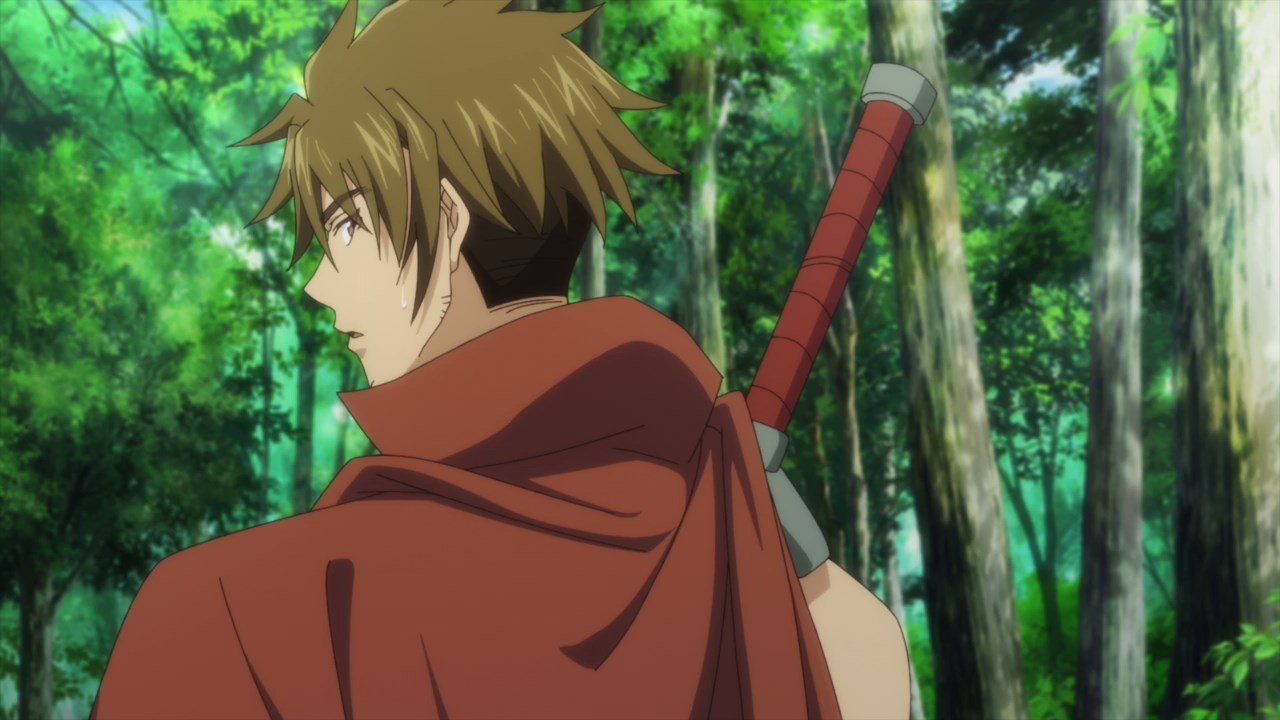 Oh by the way, it appears that Leonhardt saw the devastation committed by the Grand Magus as Yuri Drewes sets the woods on fire. Then again, I wish Yuri would put out the fire first before getting out of the woods. 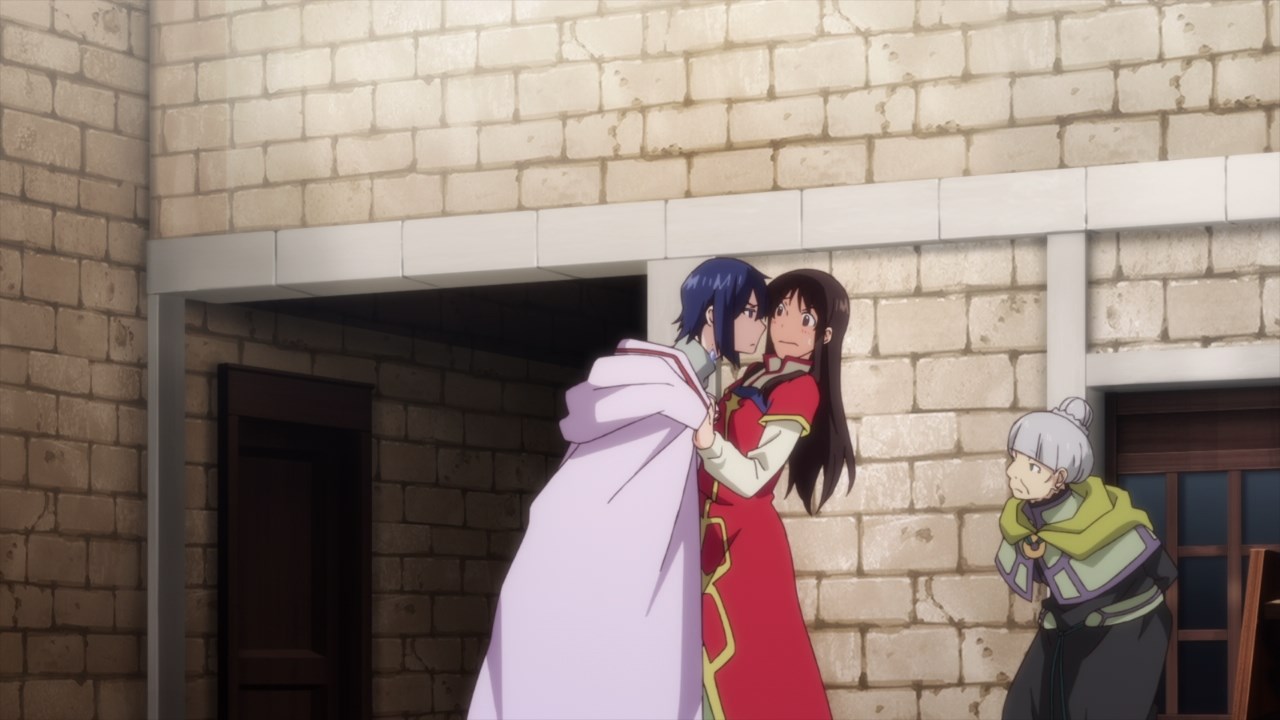 But let’s return to Klausner’s Castle where Albert Hawke, Leonhardt, and the rest of the combatants are currently taking a rest.

Of course, there’s Sei Takanashi where she’s currently using her Saintly Conjury to bless the soil, although Yuri Drewes is very curious towards Sei that I wish the Grand Magus should give some distance to the saint. 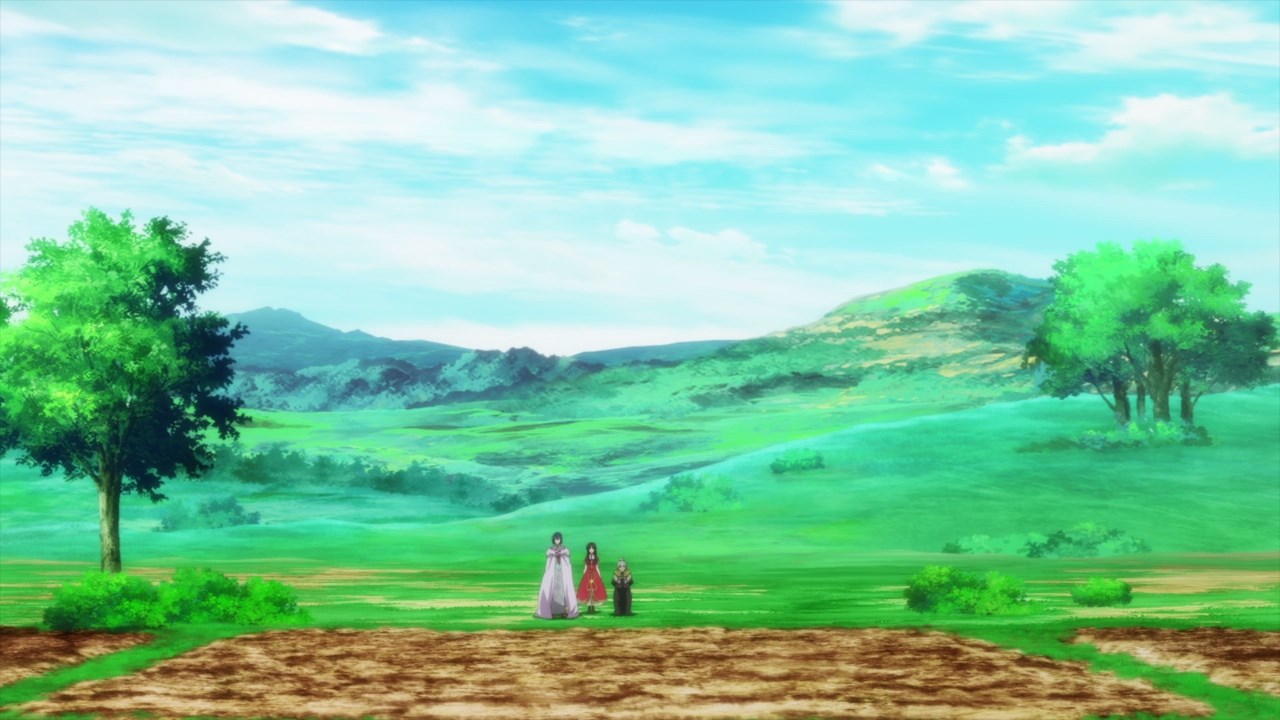 Oh by the way, I think it’s time for Sei Takanashi to use her conjury to restore this large patch of land where herbs grow there.

Even the saint is shocked that she’ll have to apply her blessings to this soil of this scale. I guess she needs to think about the knight commander a bit harder in order to bless this patch of land. 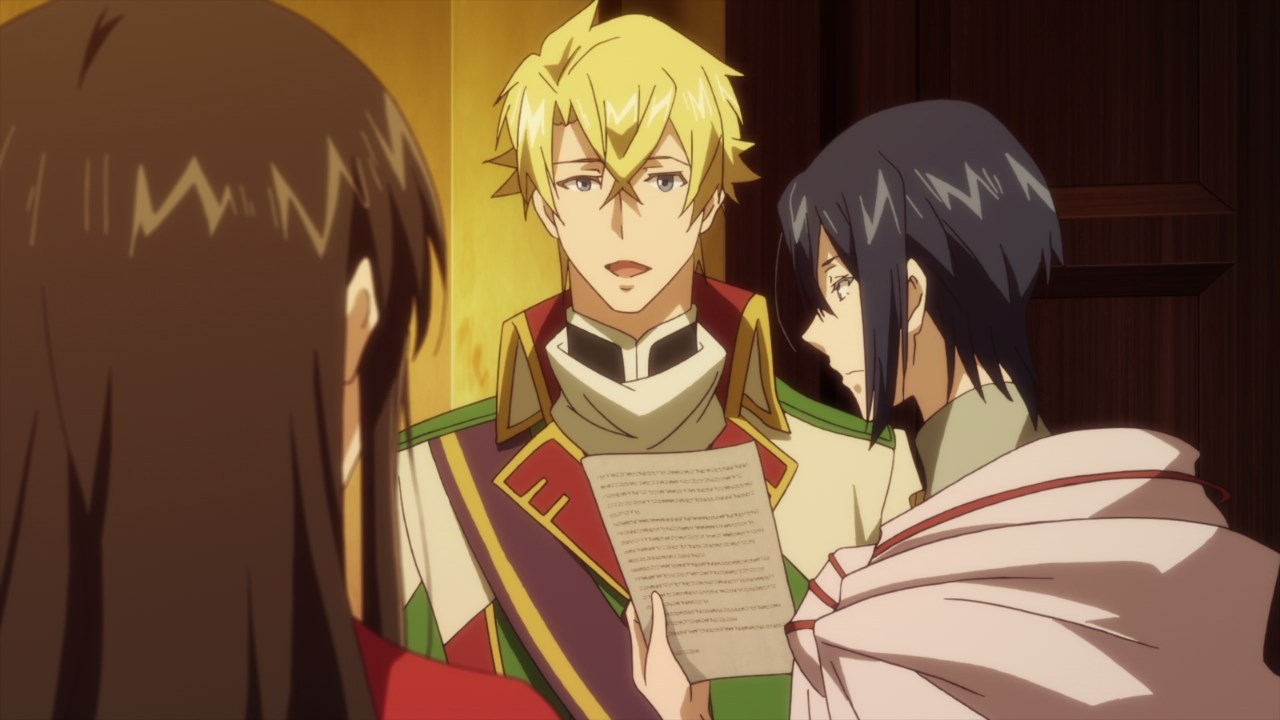 Luckily, it appears that Sei Takanashi will save the blessing for later ’cause Albert Hawke needed her assistance on stopping the miasma from spreading further across the domain. 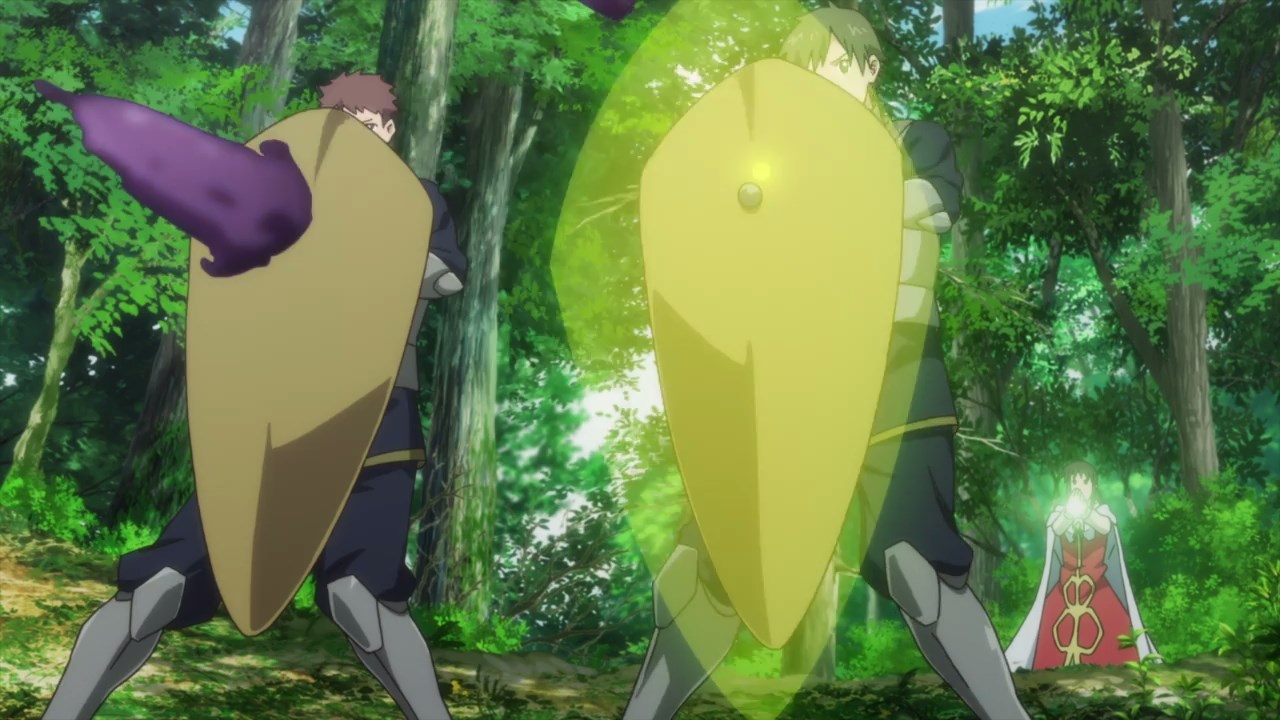 Anyways, they’re back at the woods where Albert, Leonhardt, and the rest of the combatants are tackling various slimes that lurk around the forest.

Fortunately, Sei is here to protect those knights and mercenaries as she has a plethora of powerful magic, including the one where Sei casts a shield. 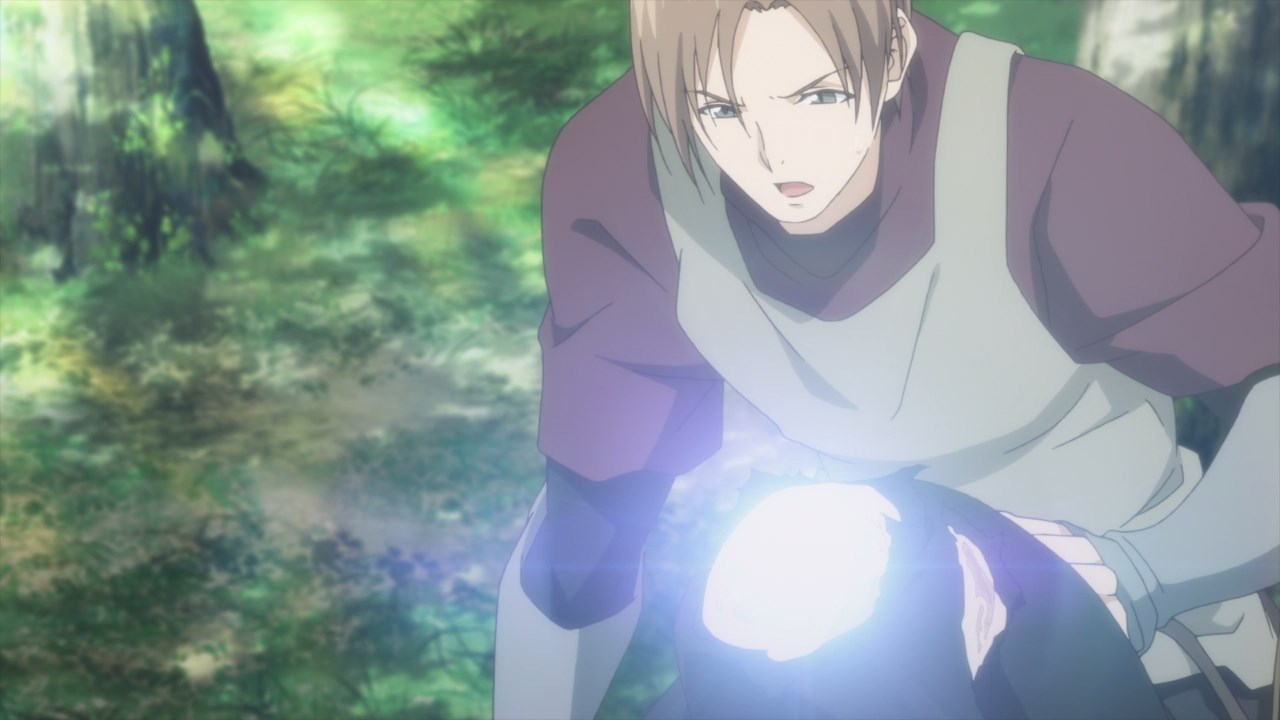 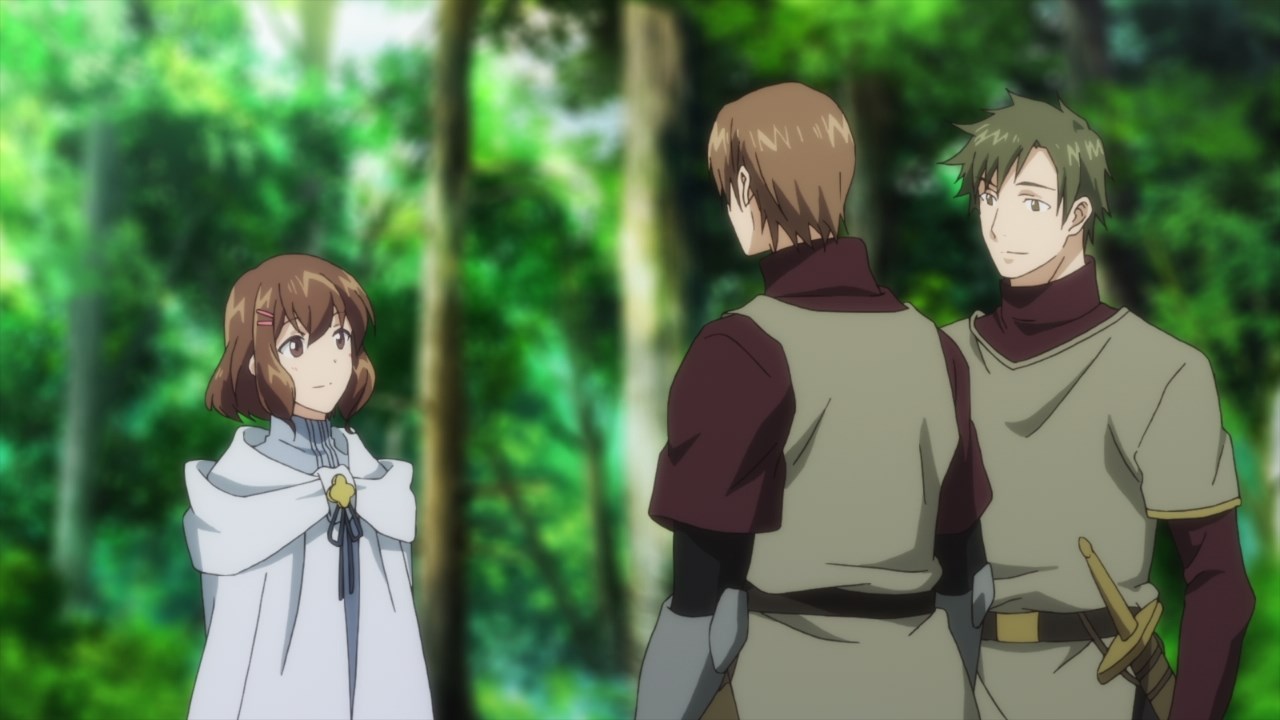 Oh yeah, let’s not forget about Aira Misono where she’s actually being useful for assisting soldiers, even healing them. Glad that Aira improved a lot after attending to the Royal Magi Assembly. 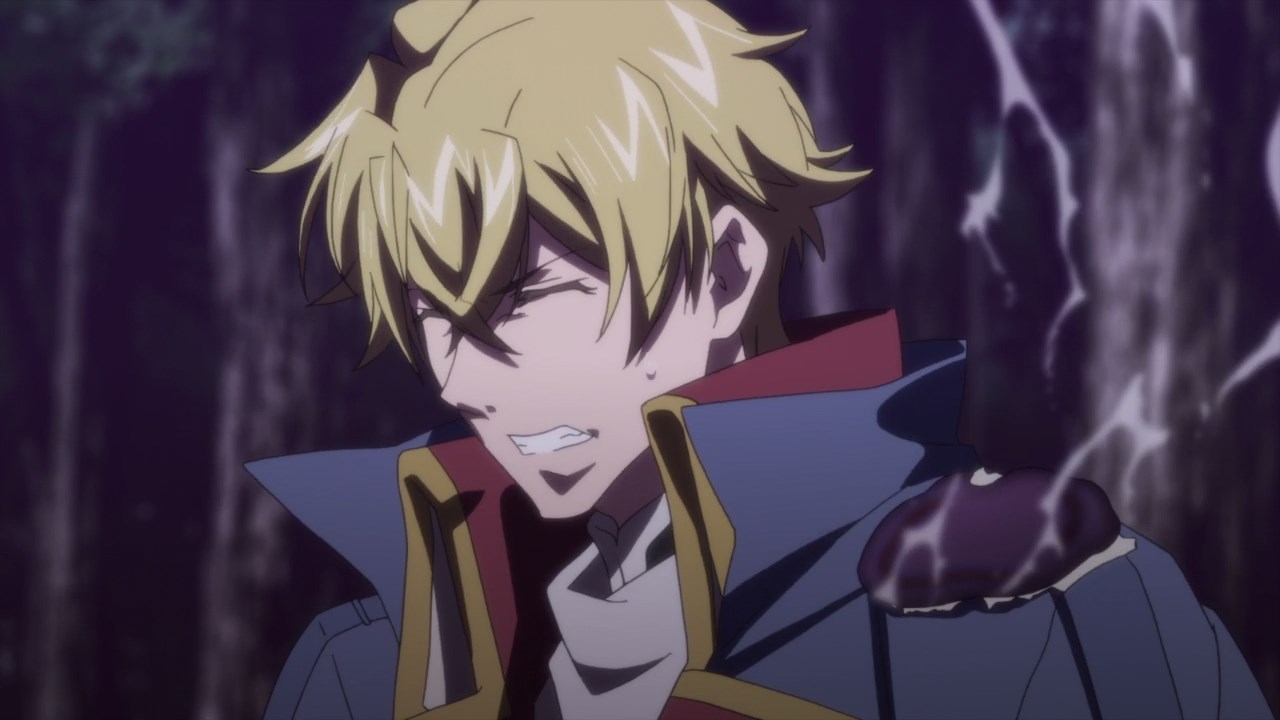 Unfortunately, whenever they go deeper into the woods, the miasma gets thicker in which powerful monsters appeared to bring more pain and misery towards Albert Hawke and his group.

Speaking of the knight commander, looks like Albert got a nasty acid attack from a slime. I guess it’s time for Sei to save him yet again. 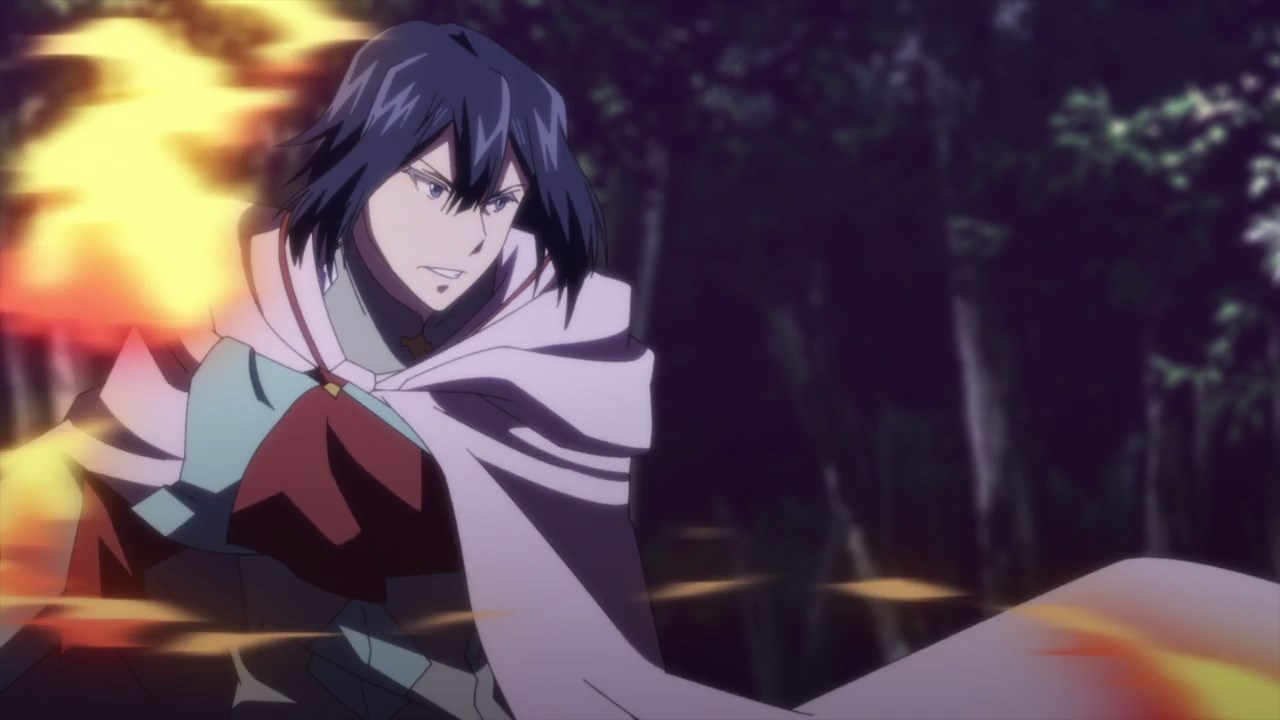 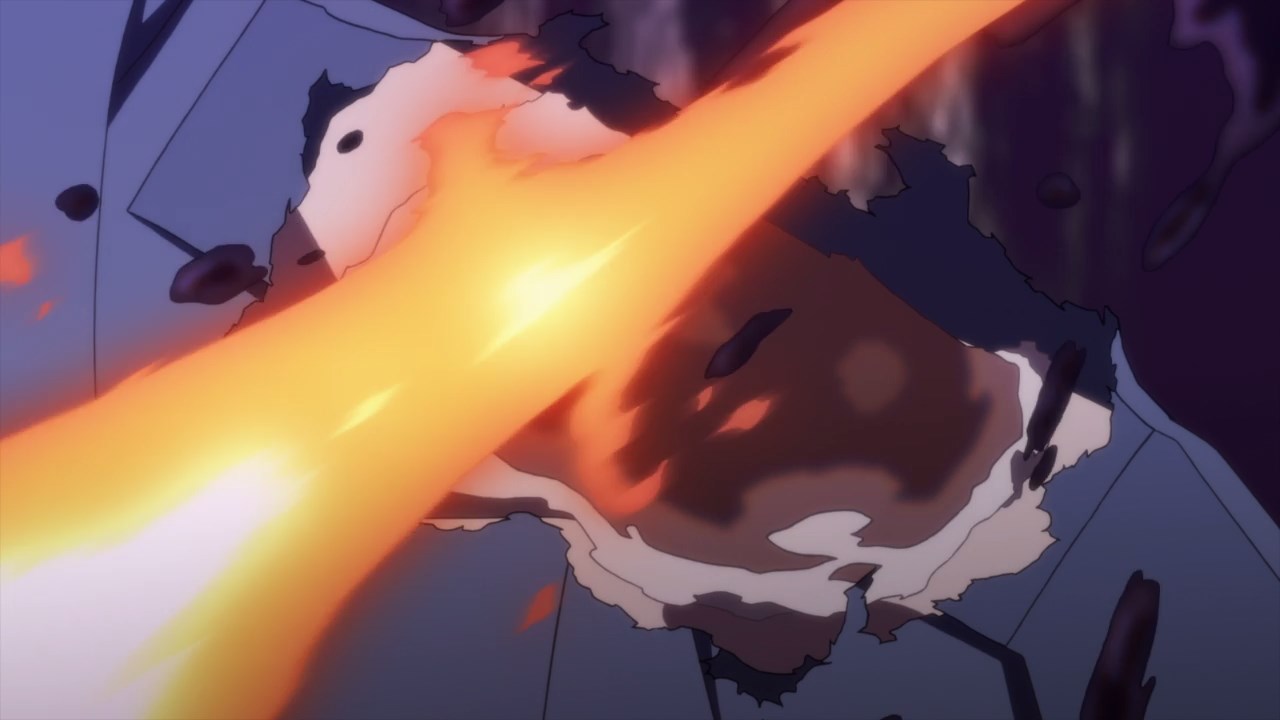 However, Yuri Drewes decides to save Albert Hawke instead as the Grand Magus wants Sei Takanashi to save her energy for clearing the miasma. 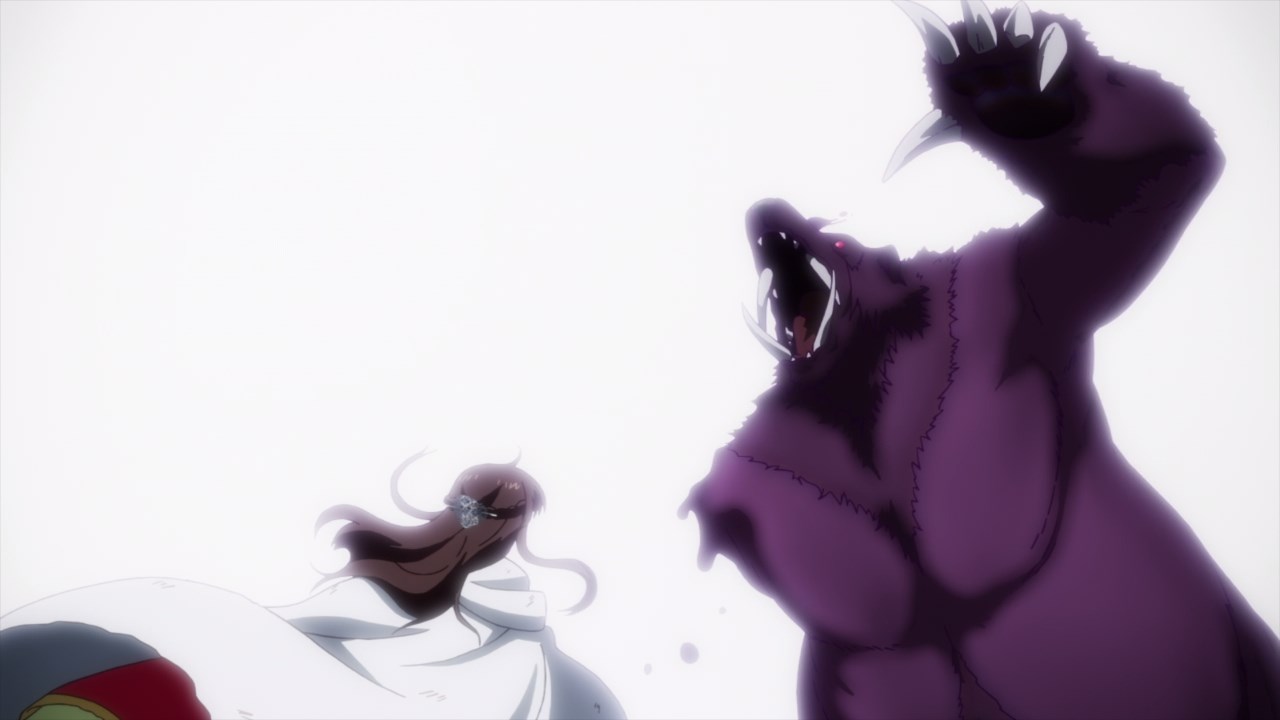 But speaking of Sei, looks like the saint is about to get pounced by a bear and while Albert tries to save her, he might be too little too late. 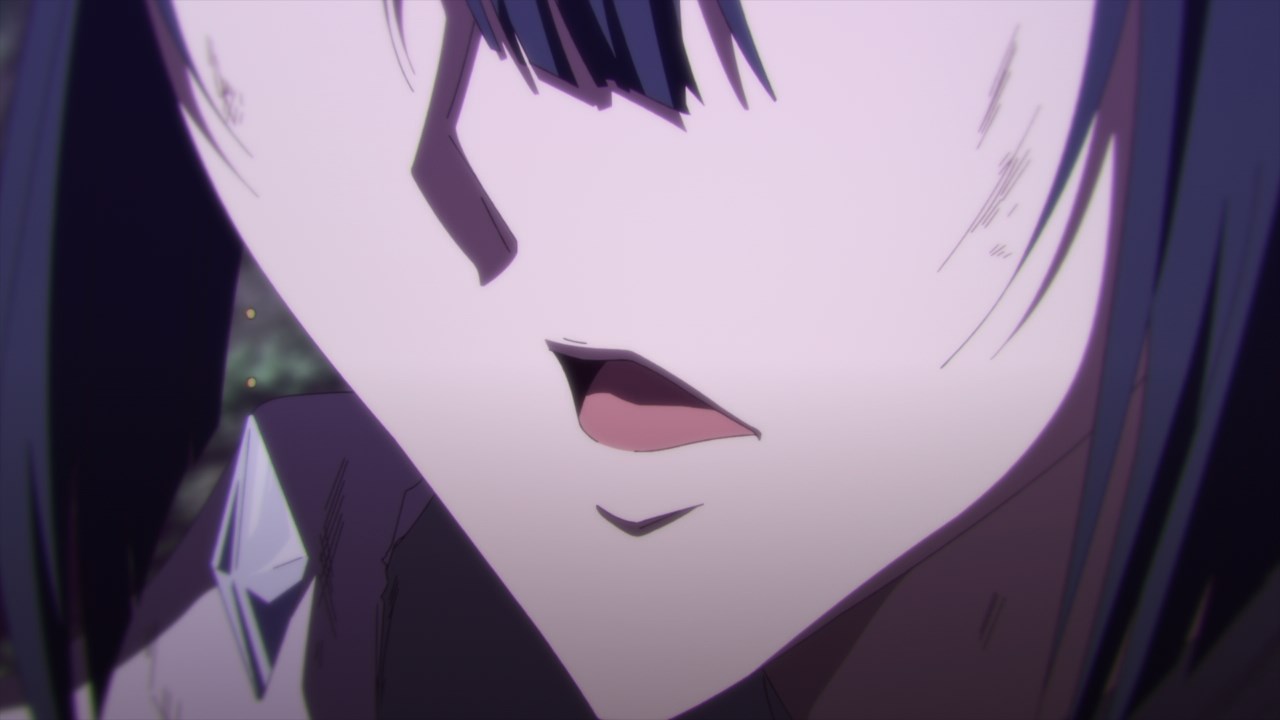 That’s until Yuri Drewes decides to cast Inferno, the most powerful fire magic in existence. 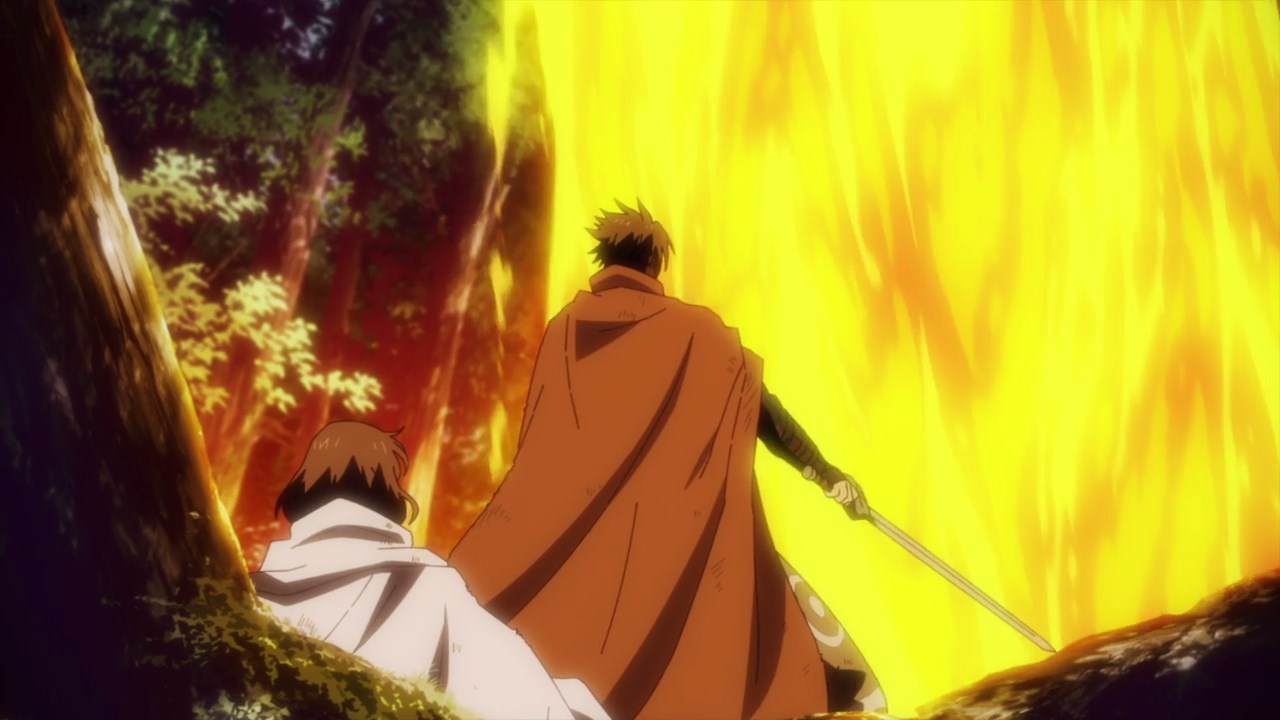 And as you can see, it’s very strong that it not only obliterates the bear, but also caused a nasty forest fire. Gotta say that Yuri did it a bit too much. 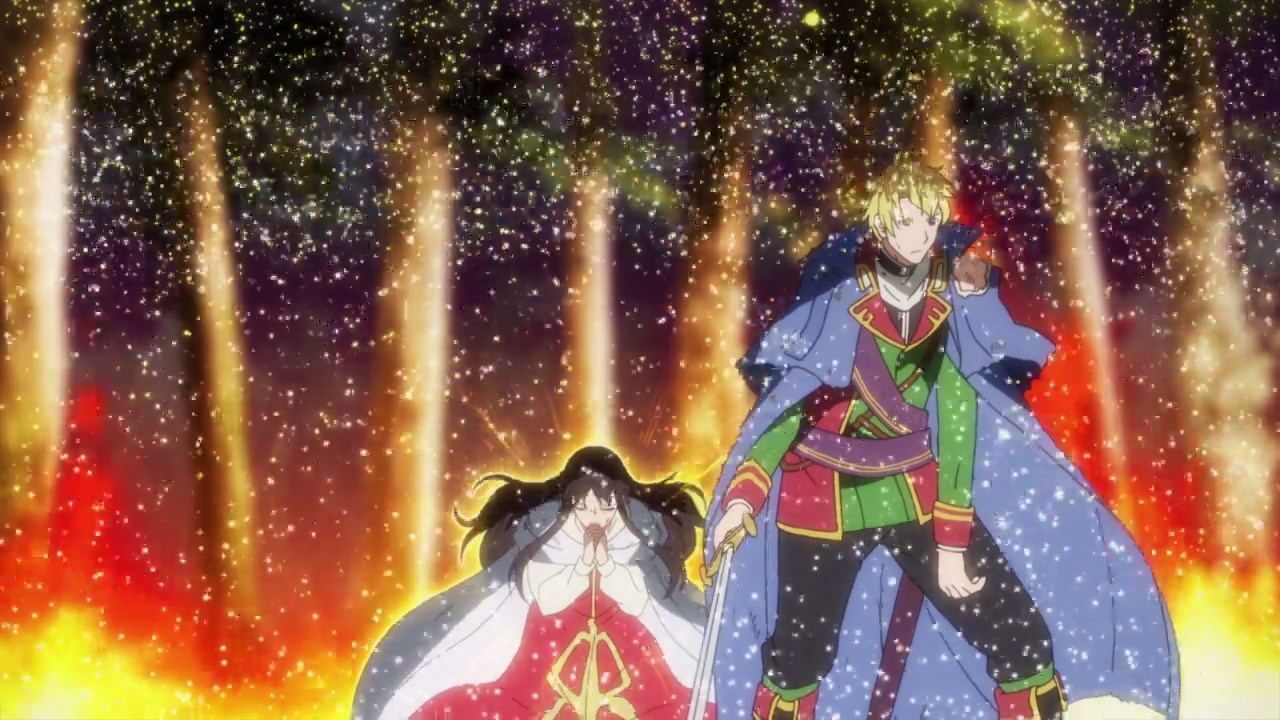 In any case, looks like it’s time for Sei to use her conjury to clear the miasma and its monsters. 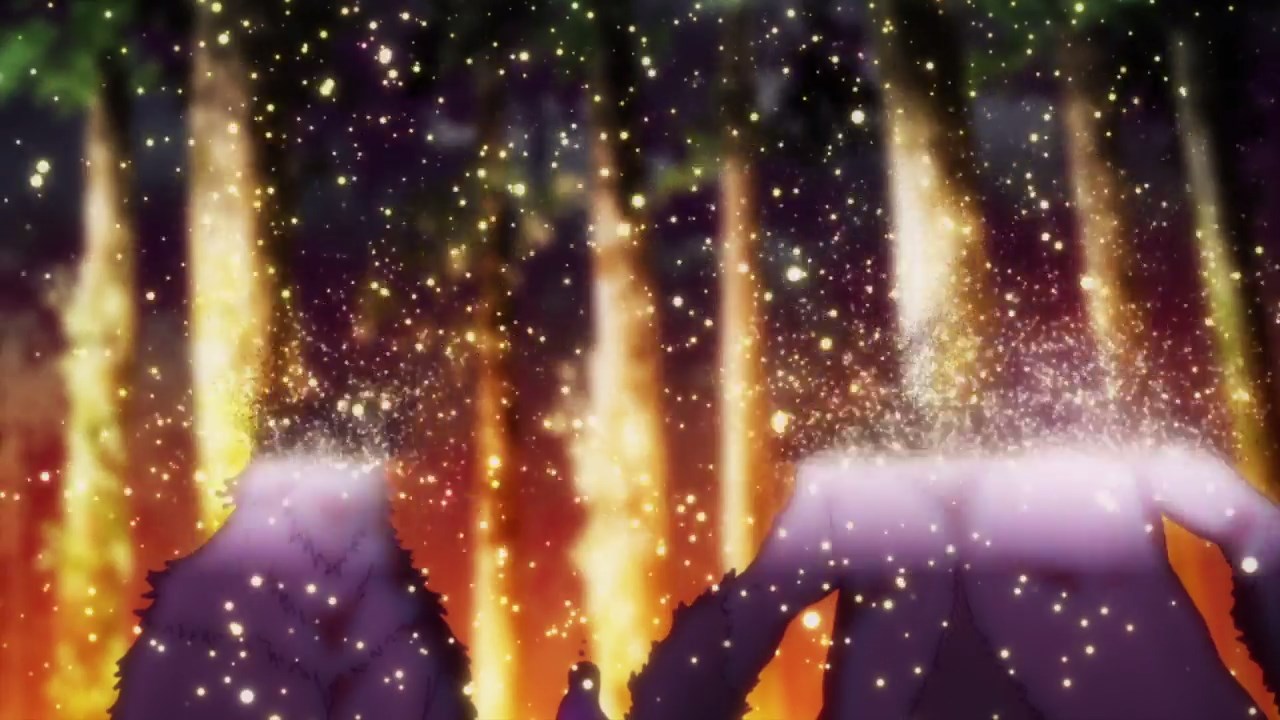 But as you can see, Sei’s conjury doesn’t stand a chance against those monsters. Anyways, the miasma is finally cleared from the forest. 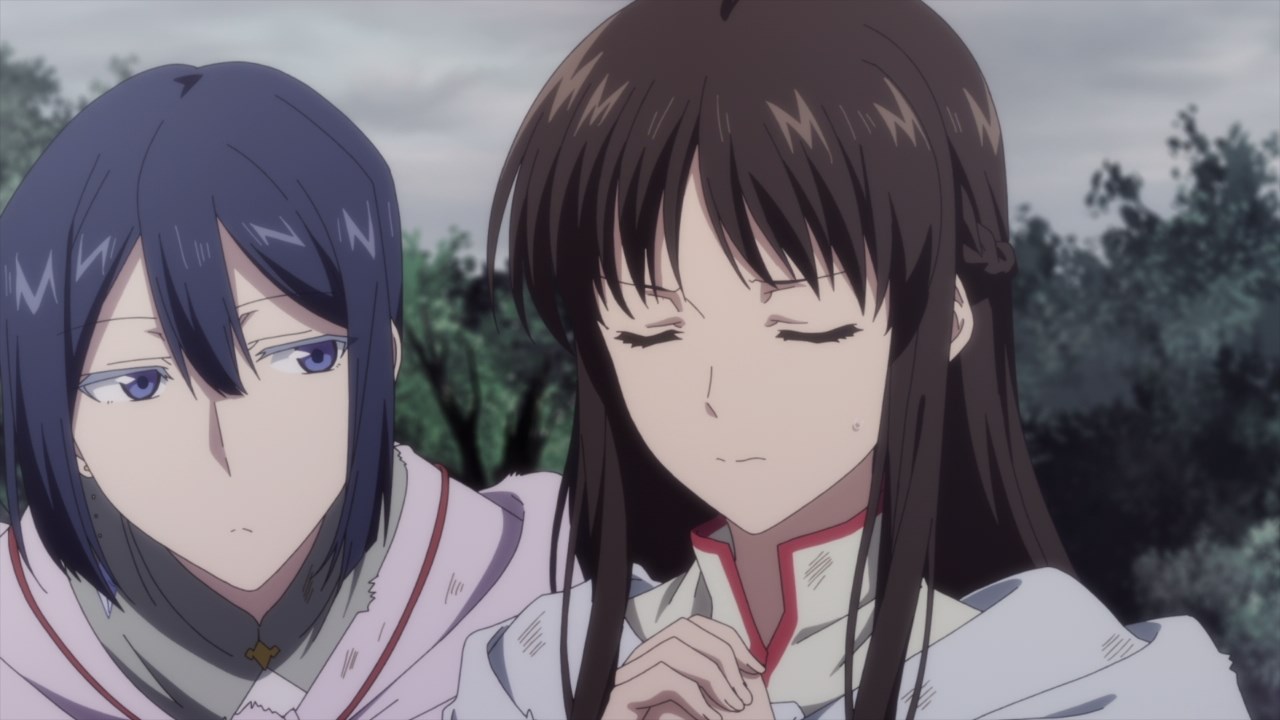 Of course, it’s not over yet as Sei Takanashi will have to restore the woods using her saintly powers. Then again, I think Yuri Drewes should stay away from Sei as she can’t concentrate. 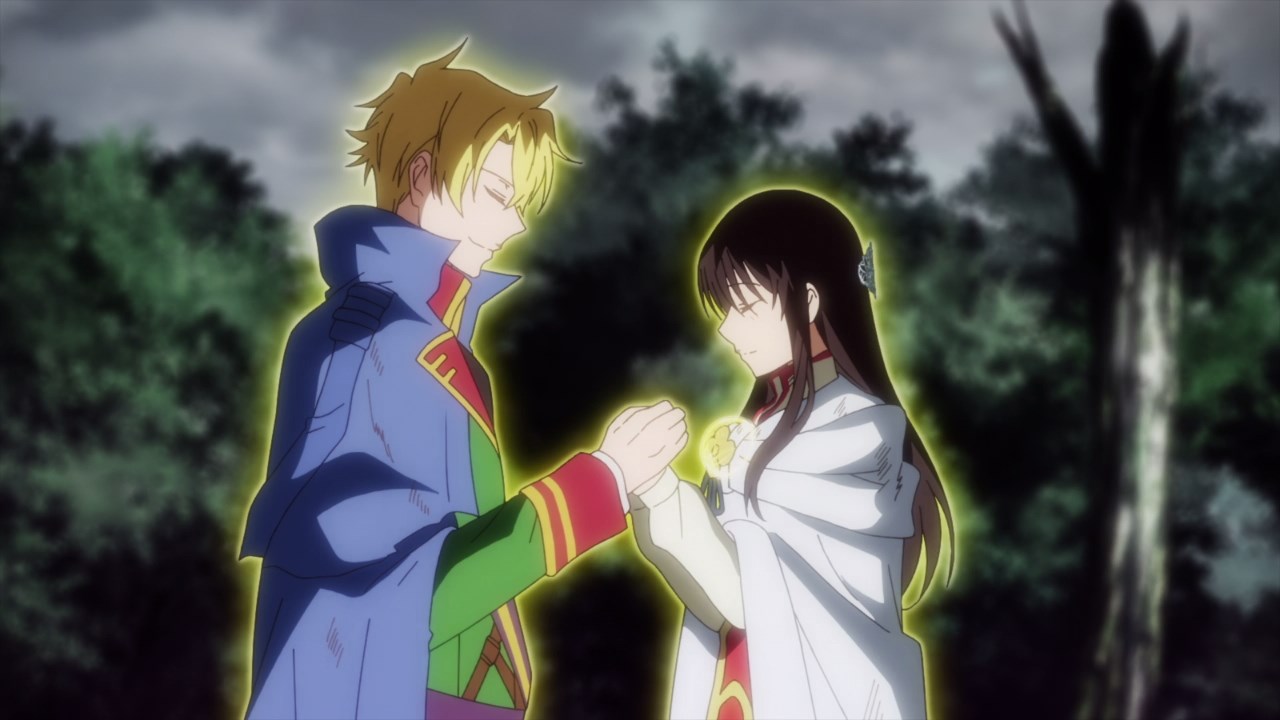 Fortunately, Albert Hawke is here to help her out as he holds Sei Takanashi’s hand. And sure enough, Sei’s powers has gone off the roof since she’s feeling Albert’s warm hands. 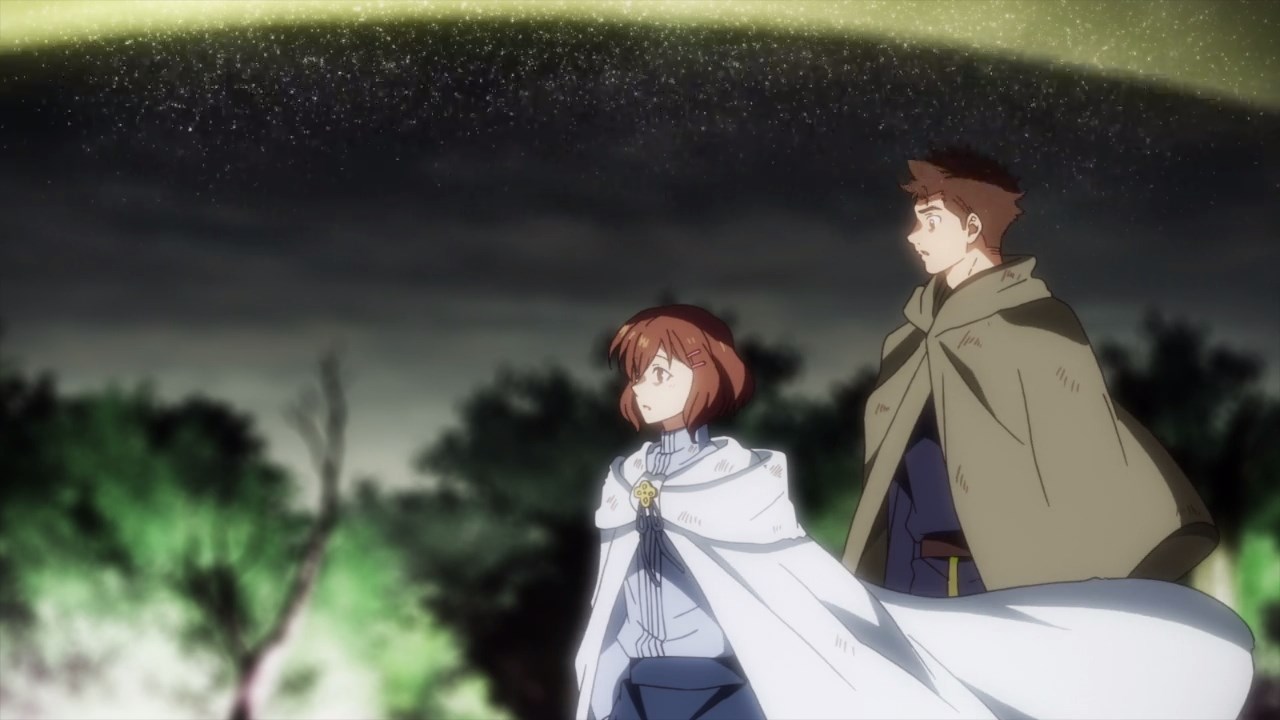 With that said, Sei used her Saintly Conjury to restore the entire forest to its former glory. This includes Aira Misono where she witnessed Sei Takanashi’s powers. 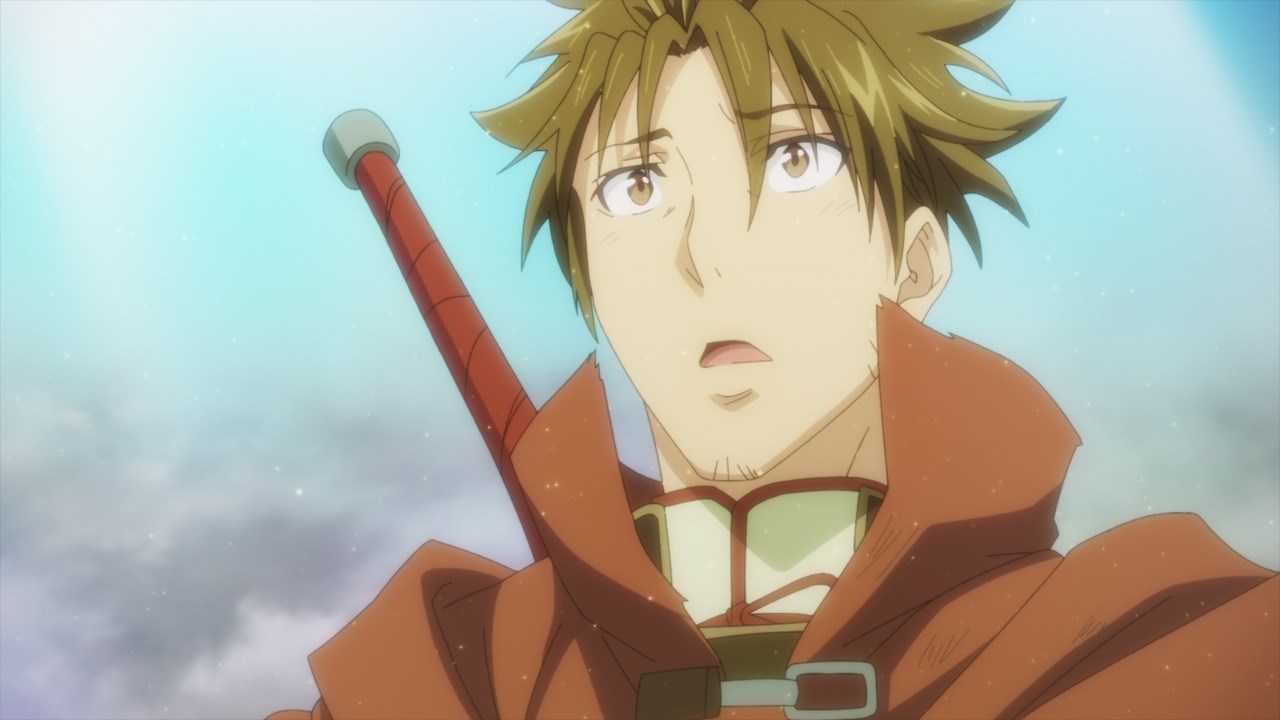 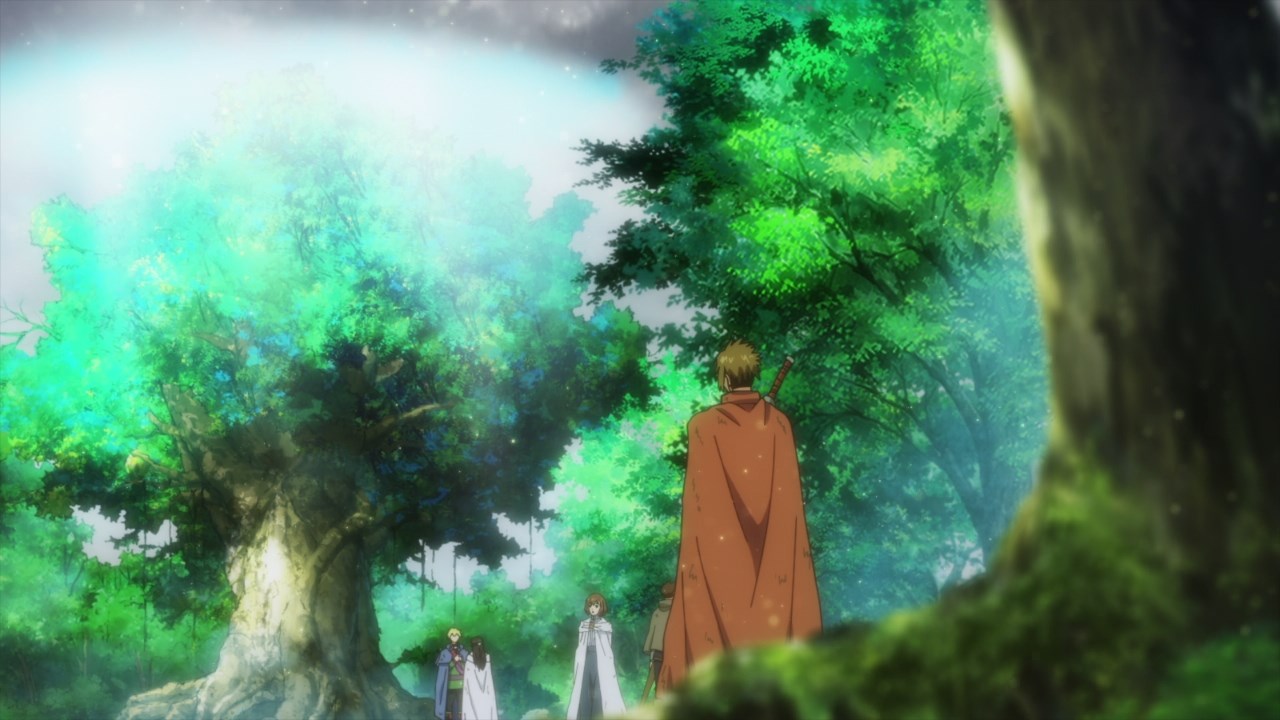 Oh yeah, even Leonhardt is surprised that Sei would rejuvenate the entire forest after she managed to remove the miasma using her saintly powers. 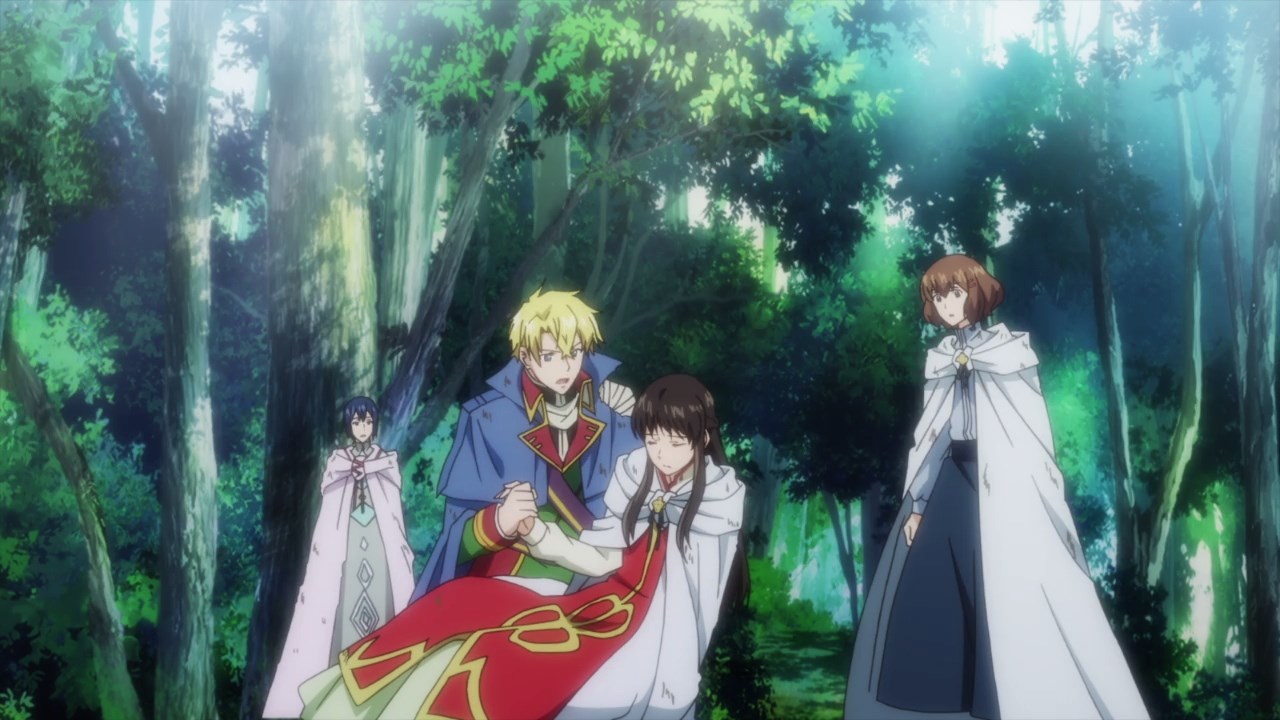 Then again, using her powers to remove the miasma and restore the forest made her very tired as a result. Man, I think she needs to drink some potions to restore her body. 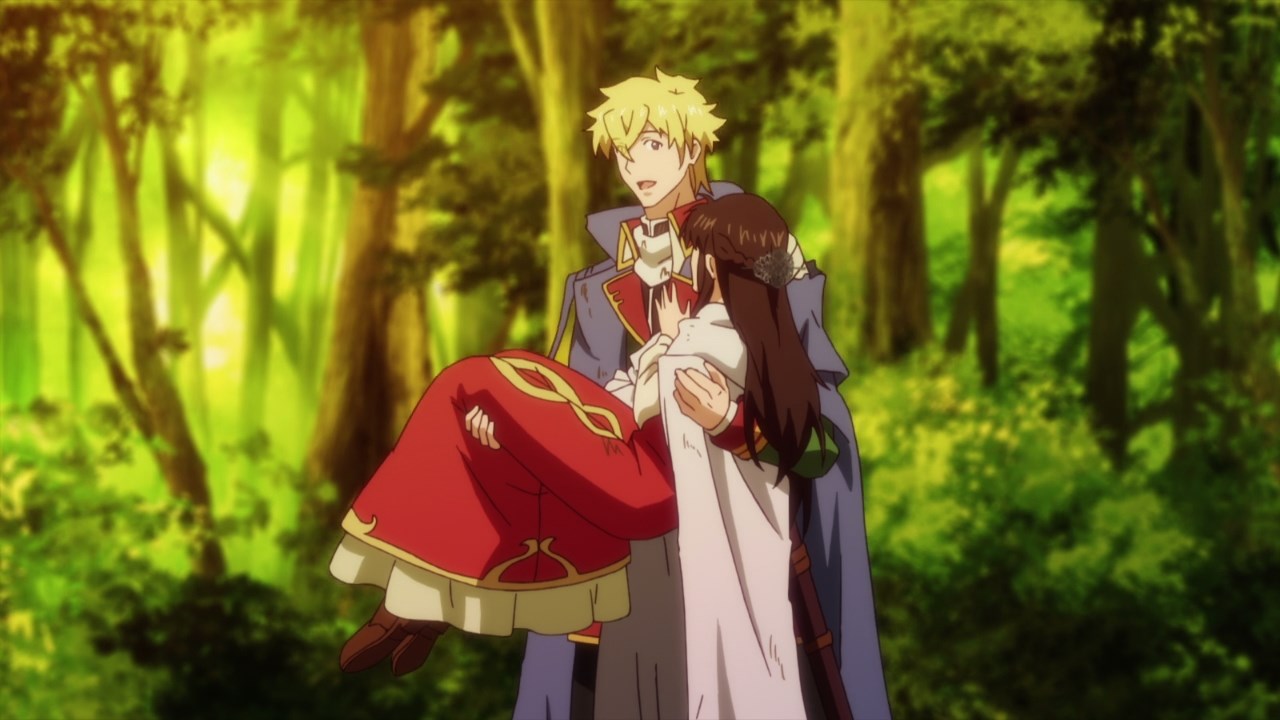 Fortunately, there’s some good news as Albert Hawke has managed to carry Sei Takanashi back to Klausner’s Mansion… like a prince in shining armor. 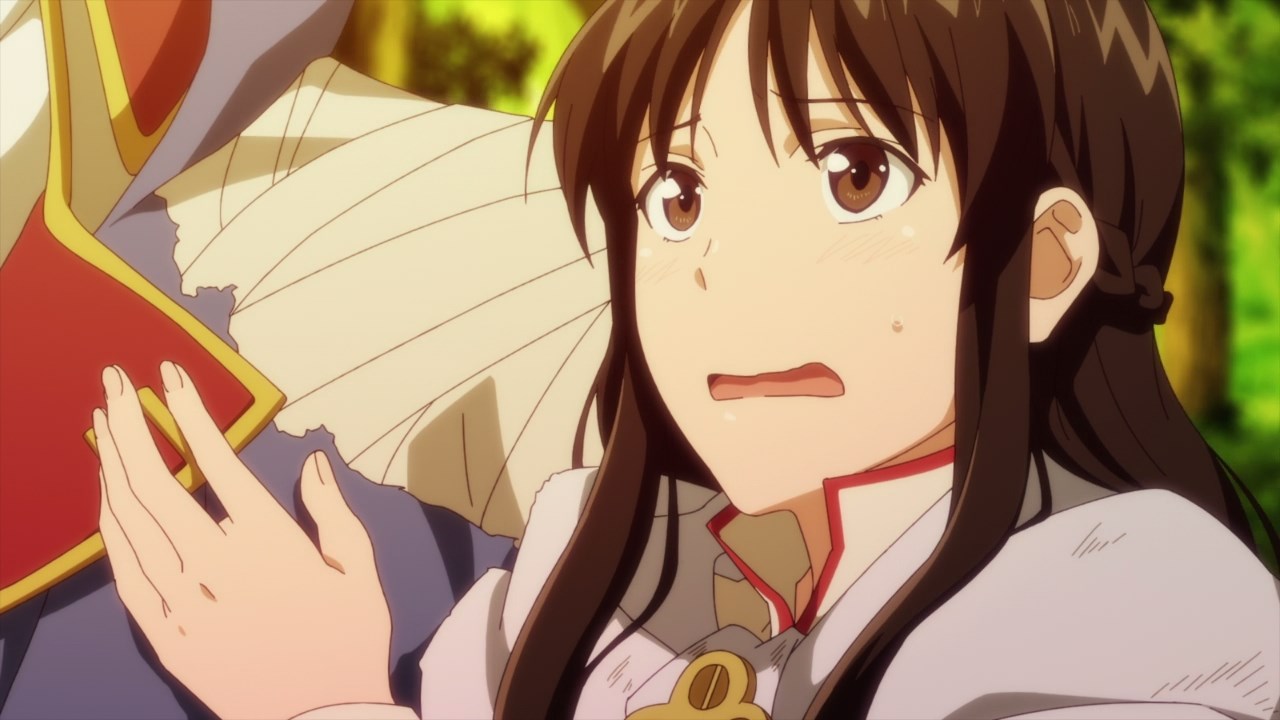 Then again, Sei is getting flustered that she’s being carried by the knight commander like a princess. Oh yeah, looks like Sei Takanashi managed to restore the fields, meaning that Klausner’s Domain can grow herbs again.

But that’s the end of Seijo no Maryoku wa Bannou Desu and I really enjoyed watching this show because I love the characters where they’re actually reasonable people. Well, except for Prince Kyle Salutania in which he’s obnoxious even though he’s doing his gambit to protect Aira Misono. Oh, and Yuri Drewes too where I’m still see him as a suspicious person who gets closer towards Sei Takanashi.

Aside from having a nice diverse of characters, especially when Sei Takanashi is surrounded by hot guys like Johan Valdec and Erhart Hawke, I love how the anime’s setting has realistic outcomes when dealing with various socio-political affairs instead of exaggerated ones.

With that said, I feel that some people miss this series out because of its isekai setting, but I really enjoyed watching Seijo no Maryoku wa Bannou Desu as it’s one of those hidden gems in Spring 2021. Now, will it have another season of this show? Personally, I’m satisfied with the ending as Sei managed to save a country thanks to her love towards Albert.